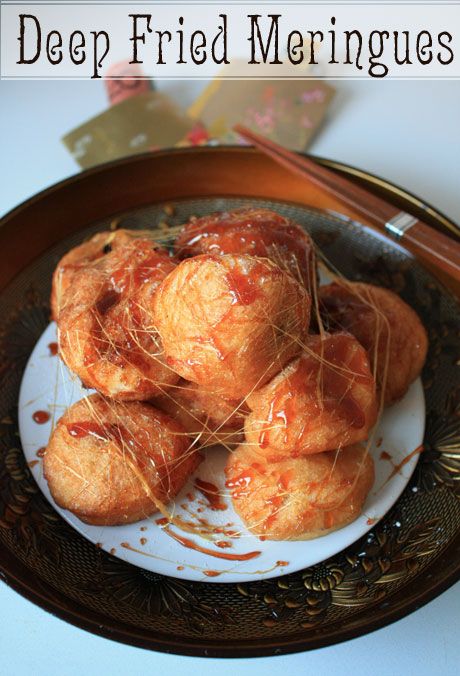 For someone that fears and loathes deep frying, I've been doing it an awful lot in the last few months. I have progressed from someone who wore a masquerade ball mask and long sleeves when deep frying to someone that will fry without any of the "head gear". I am still paranoid enough to make sure that the recipes I choose are ones that are low in water and therefore less likely to protest by way of injury to myself.

Fast forward to 2:47 for the action (and you might want to turn down the volume)

I am even at the stage where I can watch videos like this where a whole frozen turkey is deep fried and promptly catches fire that reader Wayfarer showed me the other day. Still I do prefer an experienced deep fryer to be nearby and that would be my mother who has a love of deep fried foods. If I have a recipe that requires some deep frying, she is the first person I call. 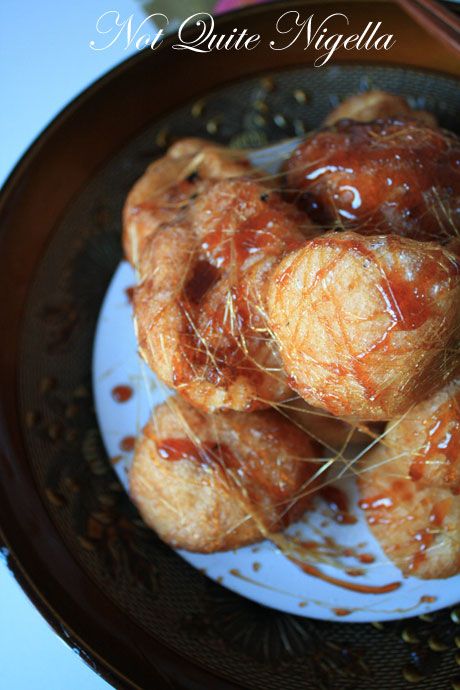 I mentioned in another story how I was so, so disappointed that Poh Ling Yeow's deep fried meringue recipe wasn't included in the new Masterchef book as that was the recipe that I was dying to try the most. One reader Winnie who writes the blog Sugar by Winz left a comment saying "...if you want a recipe for the fried meringues  email me..."

I was immediately intrigued by this so I emailed her straight away and she emailed me back. It turns out that not only is she a dab hand at cake decorating she is also very well versed in Chinese food as her family has been in the restaurant business for five generations beginning in Canton, China so I was excited at getting her recipe. She tells me that it used to be a very popular dessert but restaurants today don't tend to do it as it needs to be done just before serving it and as such it can be considered too much trouble. 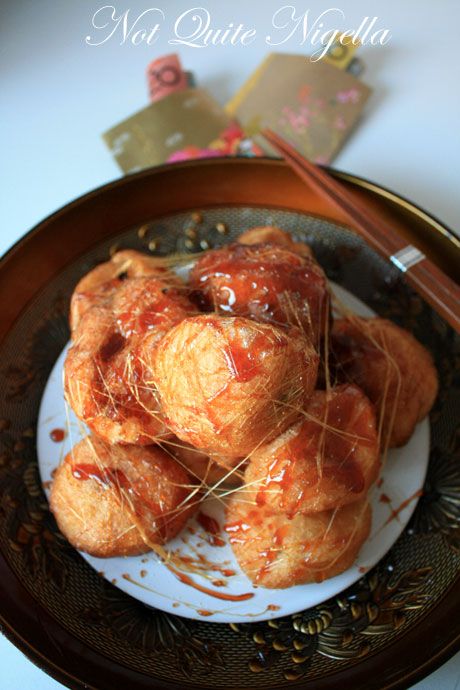 The timing could not have been better. This is the week coming up to Chinese New Year (Sunday the 14th February-eek Valentines Day too!) and I wanted a dessert I could make that was a bit different. My parents aren't from Northern China so they didn't know how to make this dessert but were as fascinated by it as I was when we saw Poh make it on TV.

It was simple enough and very straightforward but it did need to be made just before eating. We took a bite into them and were surprised. They weren't like a traditional meringue nor were they like floating islands but instead resembled a cross between a donut (albeit a donut filled with red bean paste) and those deep fried tofu squares that you find in the fridge at Asian grocery stores. A little warning though as they are very, very oily but like those deep fried bread sticks which you know are just soaked in oil, they are quite moreish. If you don't want to do the caramel, the traditional way is to roll the hot meringues in caster or superfine sugar, much like a donut. I know you may be tempted to add some cinnamon which I did for a couple of them!

So tell me Dear Reader, this Sunday the 14th of February, will you be celebrating Chinese New Year or Valentines Day (or both!)?

Adapted from Winnie from Sugar by Winz

You will also need an ice cream scoop with a lifting action to make it easier to shape these. 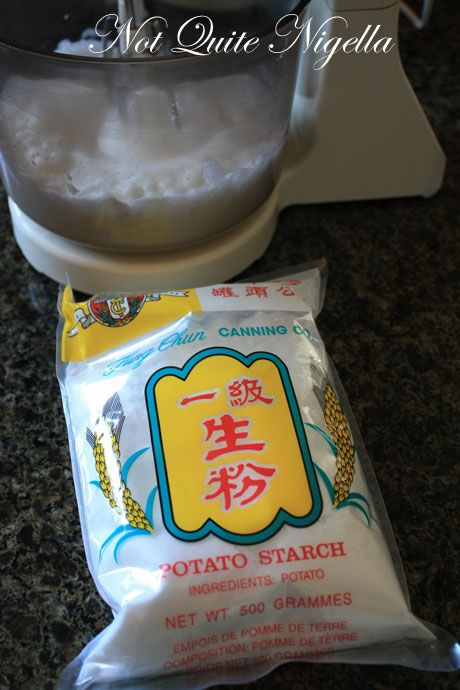 Step 1 - Heat oil in a deep fat fryer or in a heavy based large pot. Meanwhile, whip egg whites until firm peaks are reached and you can tip the bowl of meringue upside down without any movement. Beat in 2 tablespoons of cornstarch. 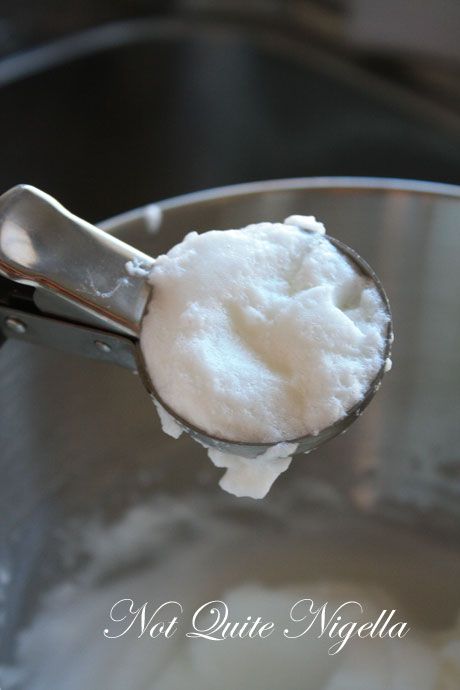 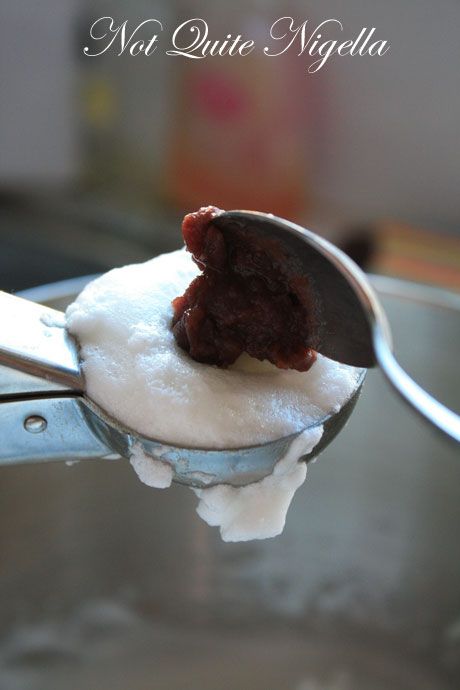 Then spoon a little filling in the centre (not too much) 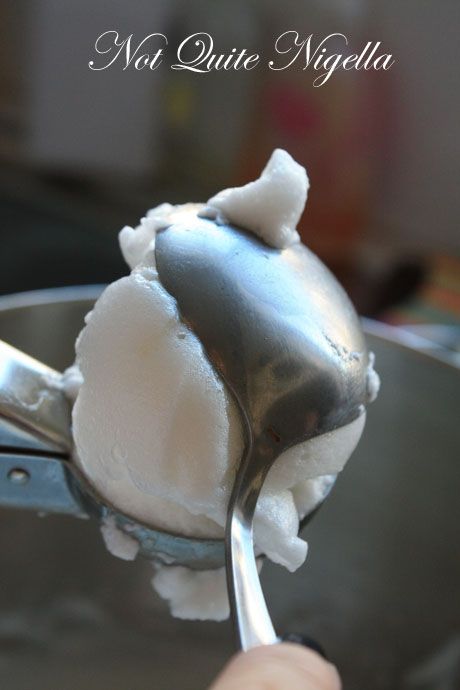 Top with a scoop of meringue 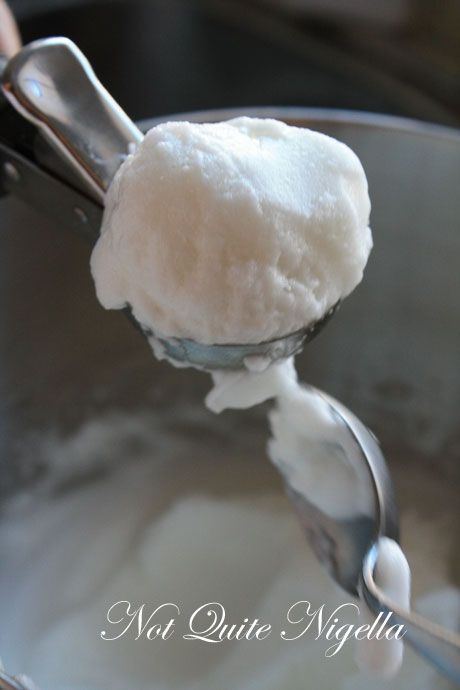 Shape the meringue into a round shape with the soup spoon

Step 2 - Test just one first to see whether you need more cornstarch. When oil is ready, scoop some fluffy egg white into the ice cream scoop and then place a small round of red bean paste into the centre. Take a tablespoon and then shape the other half of the sphere and cover the red bean completely-you want to avoid any filling leaking out as it discolours the oil. It may not be a perfect sphere but that's ok and practice does make perfect. Fry for 2-4 minutes (they don't spit very much at all, if they do spit, it's usually because the filling has leaked. You will get a bit of shrinkage but it shouldn't be too much. If there is too much shrinkage, add another tablespoon of potato starch. Continue with the rest of the balls deep frying them until golden. Place on serving plate. 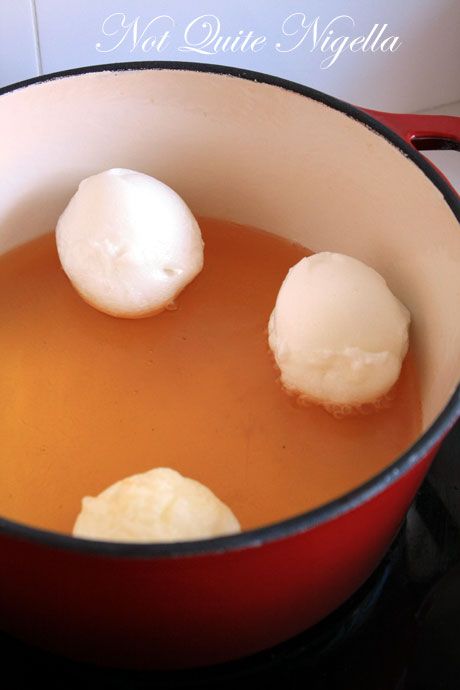 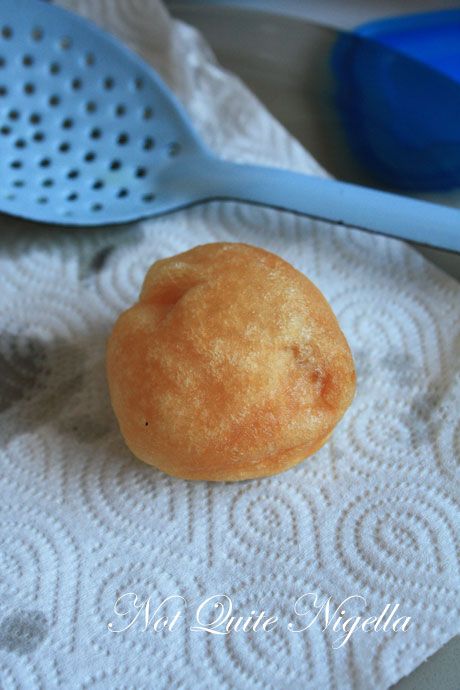 Step 3 - Make caramel. Melt sugar, water and lemon juice on low heat in a heavy based saucepan until fully dissolved. Turn up heat to high and watch it like a hawk. After about 5 minutes, it should turn caramel. Turn heat down to very low, enough to keep the caramel liquid but stopping it turning more brown. Take two forks and cooling the toffee slightly, make strands by dipping them into the toffee and making circular motions around the cupcake. If strands do not occur then the toffee needs to cool a little further. I find it easier to keep the stove on very low so that I can reheat the toffee if it sets too hard while you are spinning it. 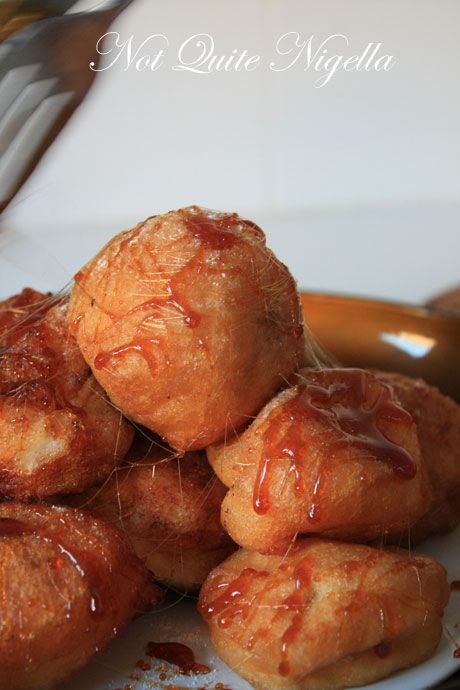 Cook's tips: Do not add sugar before you cook them as they will burn before they finish cooking. Winnie has also tried Nutella and banana & red bean or you could also make these plain without a filling. You must add potato starch is a must or they will deflate. 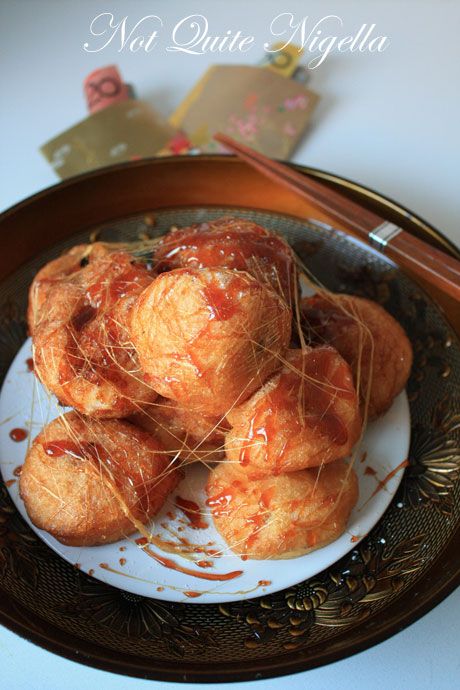