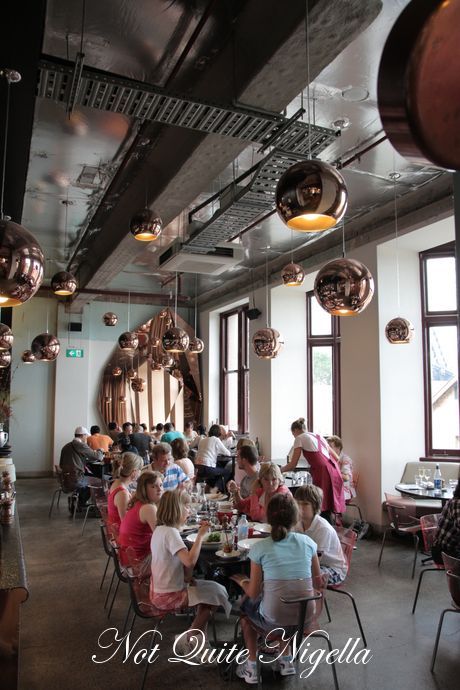 The weather outside is newly cold and the rain clouds threaten up above. We're driving through the city and jittery. It seems in one stretch of the road, people have lost all sense and we see a car coming right towards us going the wrong way in a one way road. A fat raindrop plops on the windscreen and some streets are closed off for a marathon or some sort of event. All I want is to be indoors and not to be threatened by the presence of pedestrians or drivers with a deathwish. 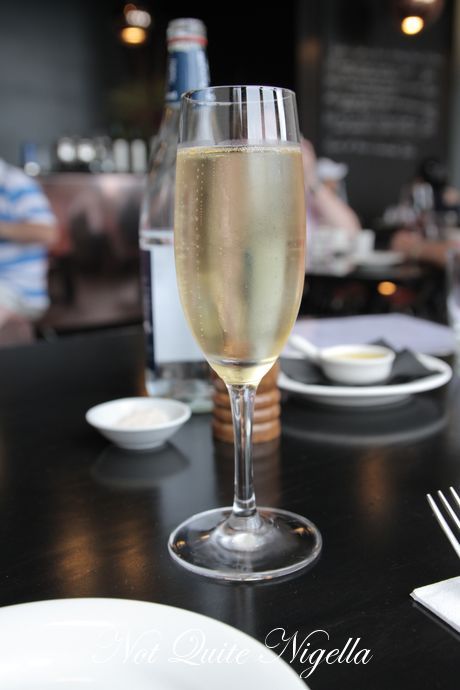 I arrive at Baroque just as a light rain falls down and take a seat in a warm bistro where the smell of bread and warm Winter food soothes me. Sometimes that's all you need to right the day. Mr NQN joins me shortly afterwards after scoring a nearby park and the day suddenly looks much calmer and better. 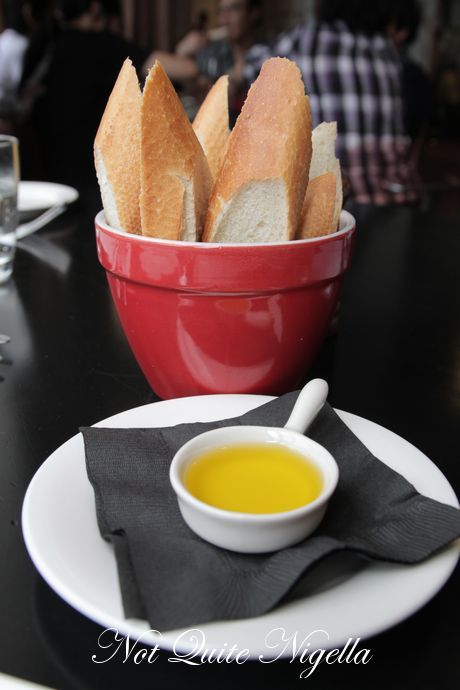 We're here to try out the Winter menu at Baroque Bistro and to taste the new season's macarons in flavours such as chestnut and pear, black truffle and chai. The last time I was here I was making macarons with patissier Jean-Michel Raynaud. Today there is a macaron class in progress but this time we will eating. After a start like this morning's I don't think my nerves could have taken on macaron making. 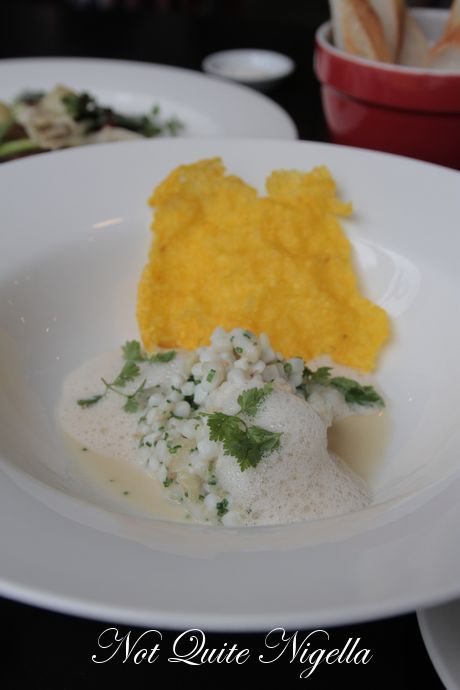 The calamari at first looking fat like it might be Israeli couscous is tender and the dish is restrained and delicate flavours from the lightly fragrant creamy crab soup to the very the saffron cracker which is thin and bubbly, like a very thin prawn cracker texture but with that unmistakable honeyed saffron flavour (and there are visible strands of the saffron dotted through it). 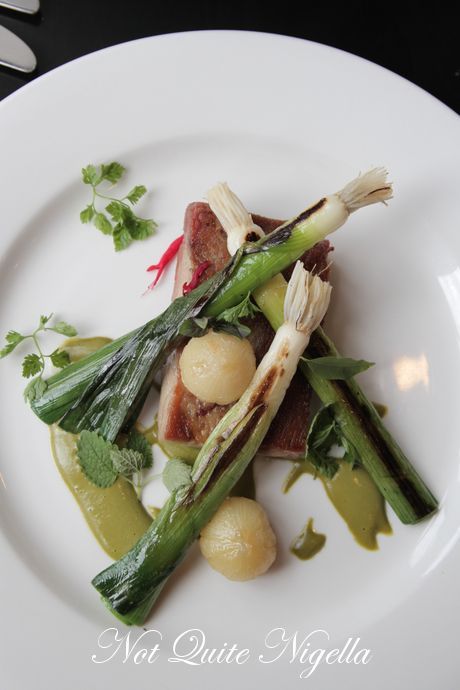 The pork neck is a soft, melting slice of pork neck accompanied by three chargrilled leeks, a mussel emulsion and sweet baked garlic. The mussel emulsion is interesting, in fact it tastes more of mustard and the herb lovage than mussels but it is a lovely creamy accompaniment. They're being generous with the leeks but really one or two leeks would have done proportion wise and I even enjoy pairing mouthfuls of the pork neck, the emulsion and the garlic without the leek. Interestingly this is based on a popular staff meal at Baroque (please form an orderly queue to work there!) with variations made of a pot of mussels with bacon, garlic, leek, celery and parsley. They use lovage which they grow themselves which is a celery tasting herb which like celery can overwhelm other flavours. 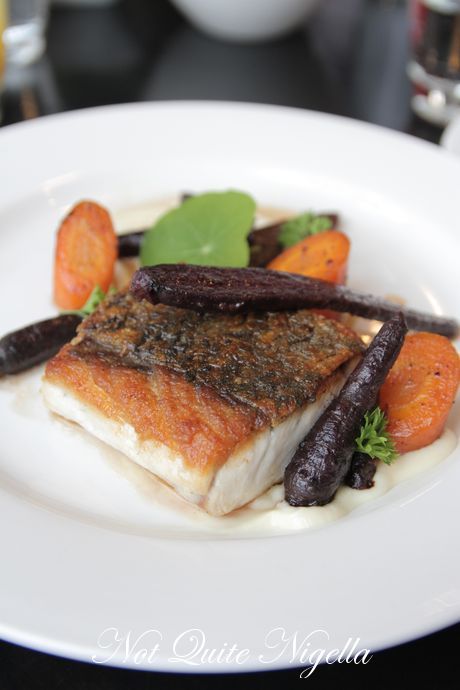 Have you ever heard of vadouvan? It's what they consider a French curry and when they set down the barramundi in front of us the distinct but unexpected aroma of curry. The vadouvan which is dusted on top of the barramundi means that the barramundi needs a touch more seasoning as the skin s quite crispy but hard to cut against the moist fish underenath. It is paired with purple and orange heirloom carrots and a chicken vinaigrette which is quite mild. Piling the plate with chips gives it that saltiness. 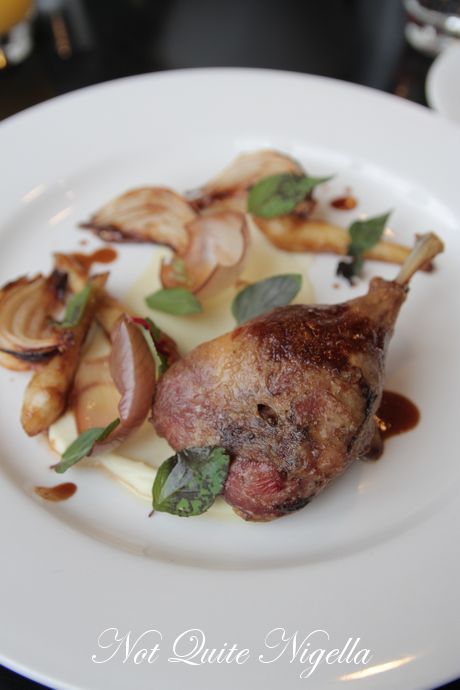 The confit of duck from Llandilo in the Hawkesbury district, a new addition added just for Winter is paired with a creamy white onion soubise with roasted parsnips and a parsnip puree and veal jus and a few pieces of pineapple mint. There are two onion shells which hold a vinegar which isn't quite as harmonious and we prefer it without the vinegar. The confit is soft and goes well with the soubise. Wood sorrel is an interesting flavour said to have a green apple skin flavour. 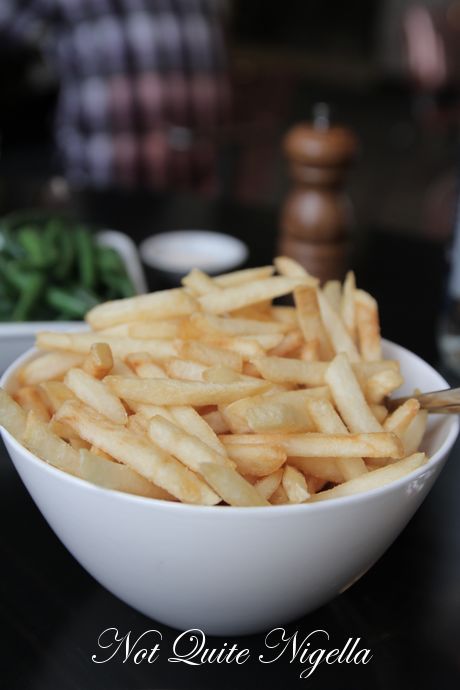 What diet? I may have eaten my body weight in these chips. I'm not telling... 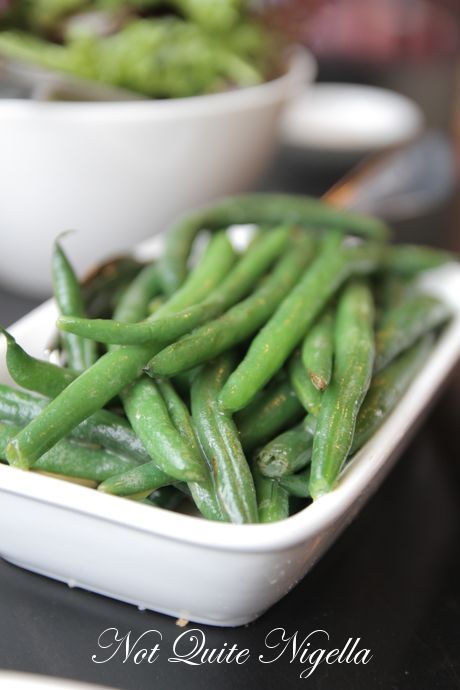 I did leave room for these buttered beans too. 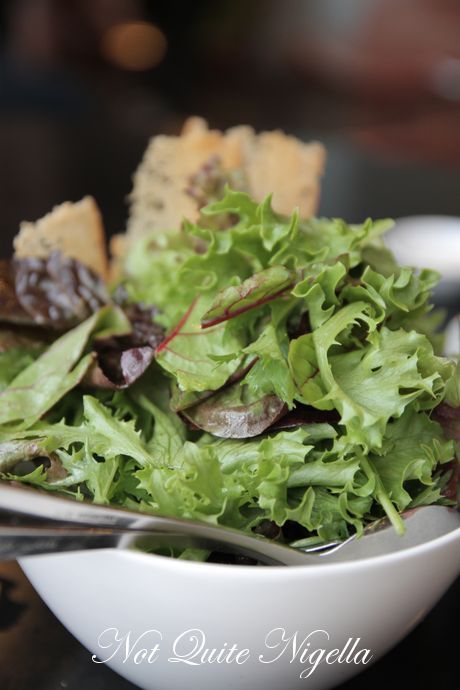 I wasn't quite ready for salad though, but the parmesan crouton was a goody. 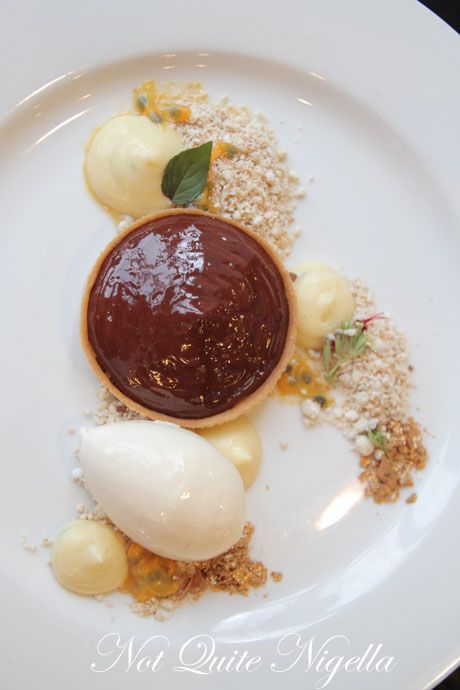 Now dessert time was hotly anticipated. For not only did it bring us one step closer to the eagerly awaited black truffle macaron but I knew that it would be a goody in itself! The first dessert is a soft 70% Valrhona chocolate tart with a texture like a fruit curd hiding some of those tongue happy pop rocks inside. It is paired with malt ice cream and am ambrosial passionfruit curd which I went a little gaga over. In fact I went a bit gaga over this whole dessert. I know I know pop rocks are so last season but the flavours are just perfect together. 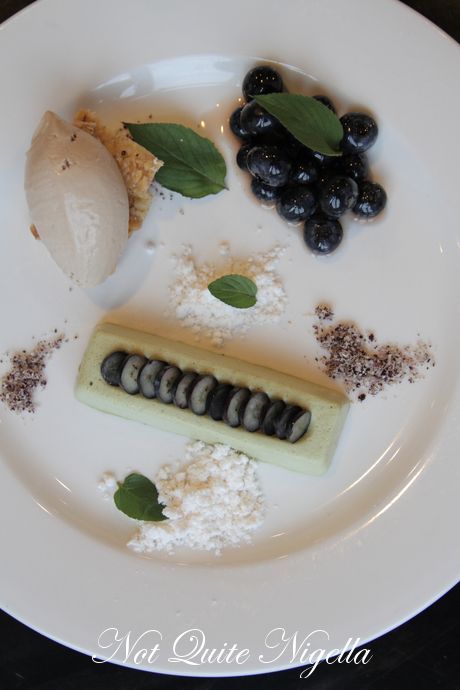 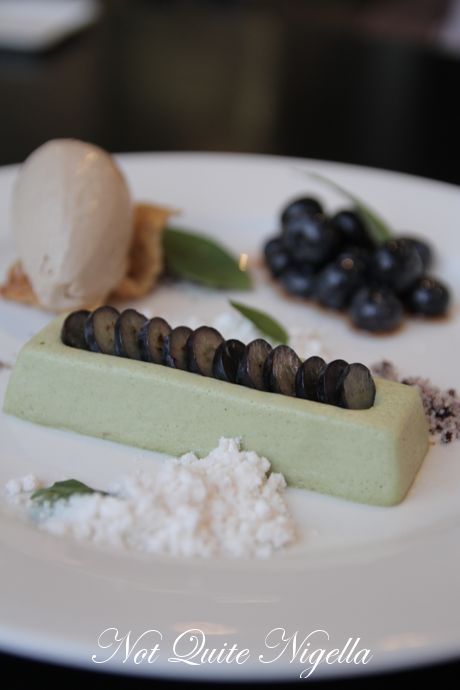 The bavarois has halved blueberries down the centre and the first thing I think about is how long that must take to plate up. The lemon verbena which is a strong aroma is paired with a walnut nougatine and walnut ice cream made from a walnut milk base as well as a sweet blueberry salad with syrup and a white peanut powder which dissolves like Persian fairy floss on the tongue. Whilst we liked each element we didn't feel that they all went together and it felt like three separate desserts on the one plate. Because this was a preview tasting and the dishes were being tweaked they have since told us that the peanut powder won't be a part of the dessert come Winter. 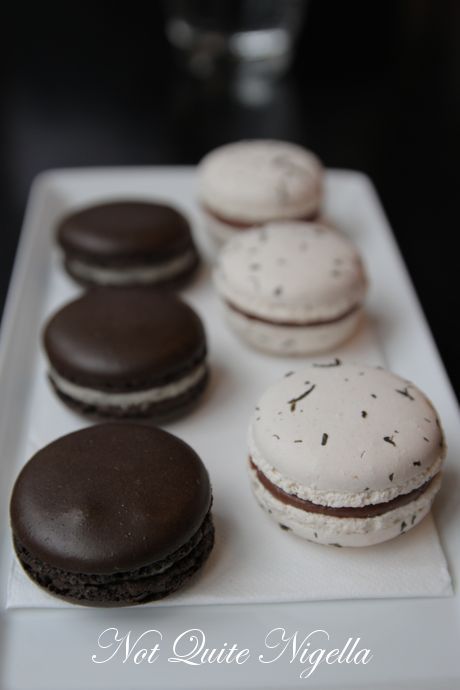 As dark as a racing horse the black truffle macarons are so very interesting. At the first bite your mouth senses resistence to the savoury flavour but the second and third and subsequent bites my mouth wanted more. And that's my excuse for polishing off four of these in the space of a day whereas Mr NQN is less taken with it. The chai macaron reminds me of christmas with its strong clove aroma and it's one that we both adore. 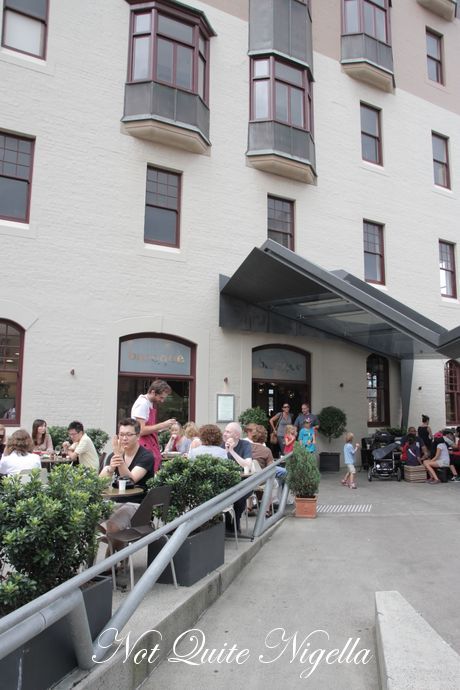 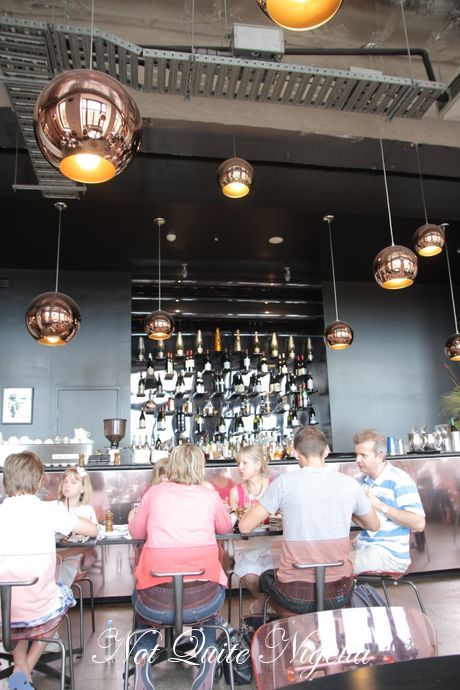