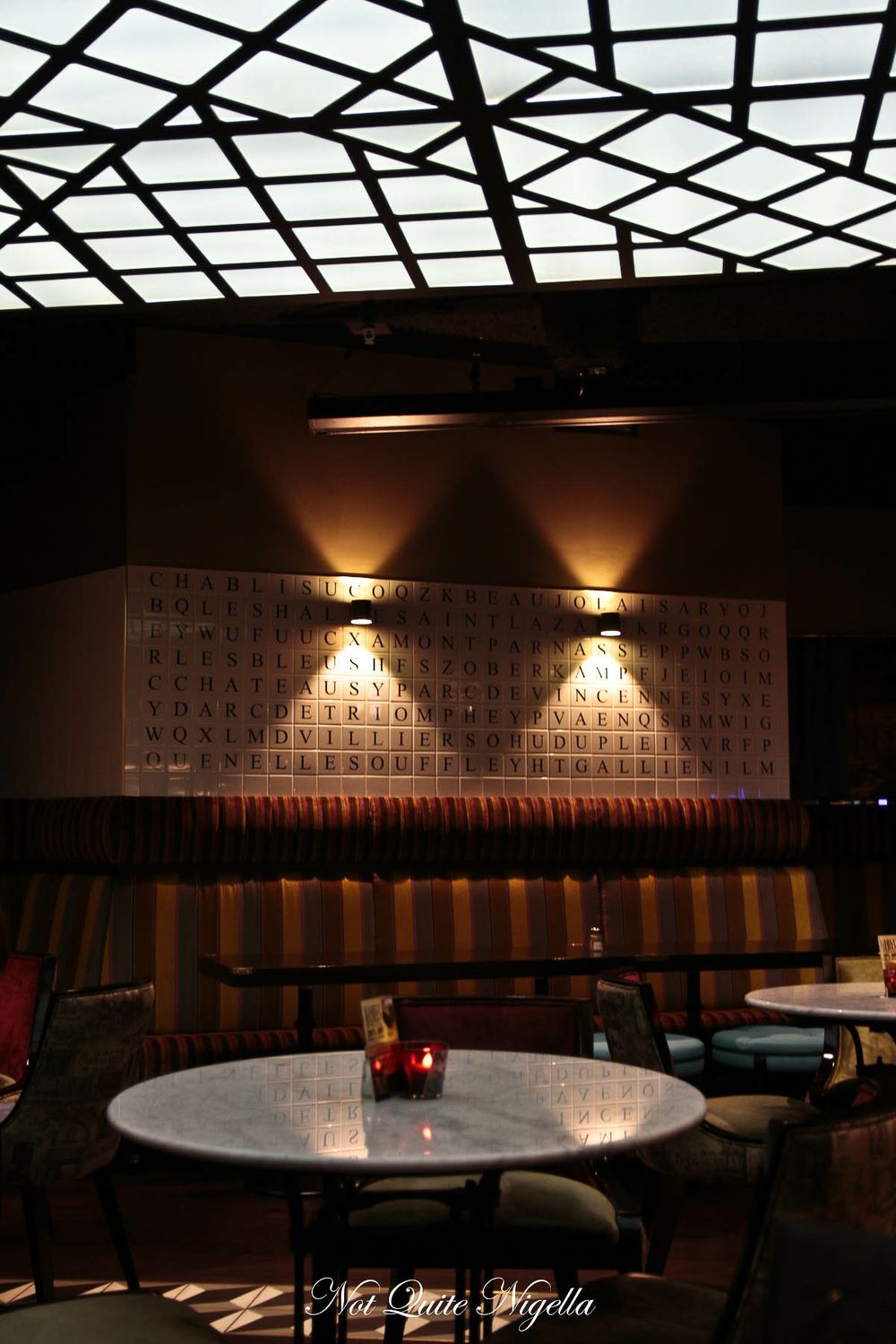 I remember the first time when I started blogging during business meetings. I hadn't quite made it a full time job and way back then, people didn't even know what the word blog meant. I had to call it a website. I made no secret of the fact that the highlight of the day was lunch out at a restaurant and luckily, I worked with some people that liked having meetings in a restaurant. I was so new at it that once I got so excited and preoccupied with taking photos of everyone's dishes that I forgot to take my own. My boss watched my eyes follow a waiter handing over the same dish as I had ordered and reading my mind he said "No, you can't go over there and ask to take a photo of that lady's dish" and I sank back down when I realised that he was probably quite right. 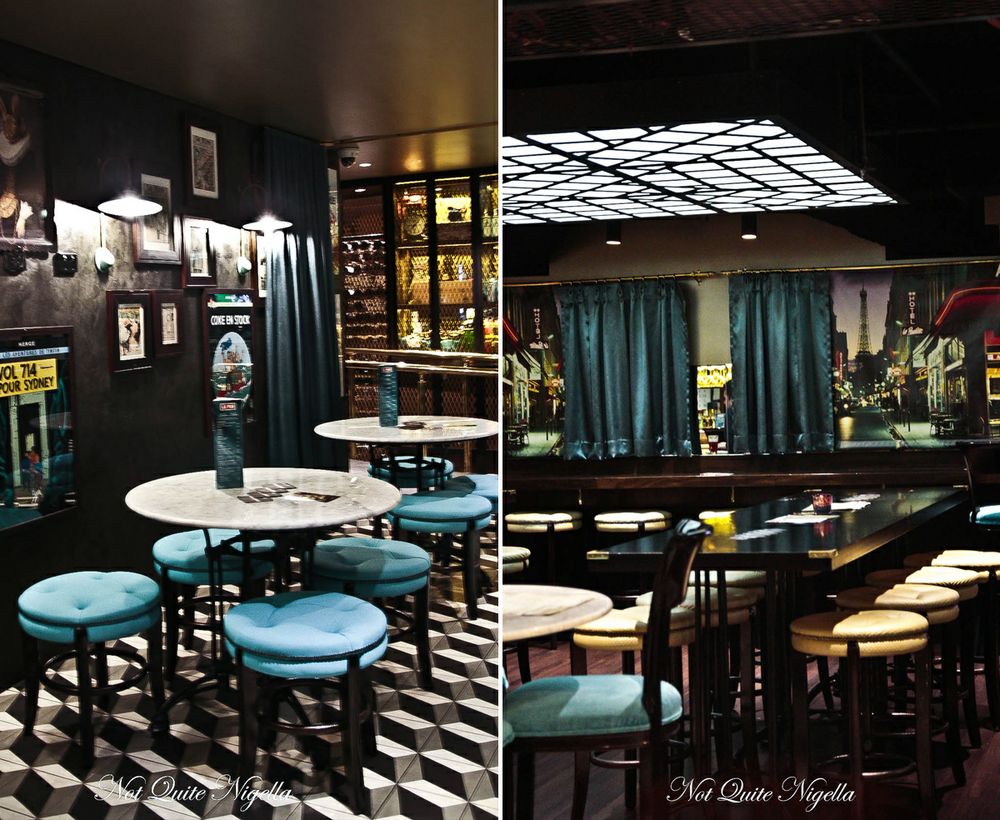 And while some things change, I still like having meetings over lunch. And when it's at a place that I haven't visited, well I always bring my camera along. We're at Le Pub, open in October 2012 on King Street just near George Street. There's a big sign outside and there are two entrances to the downstairs Parisian style pub. Inside the predominant colour is seafoam (did I really say that? I meant blue) and the pub is open every day but Sunday. 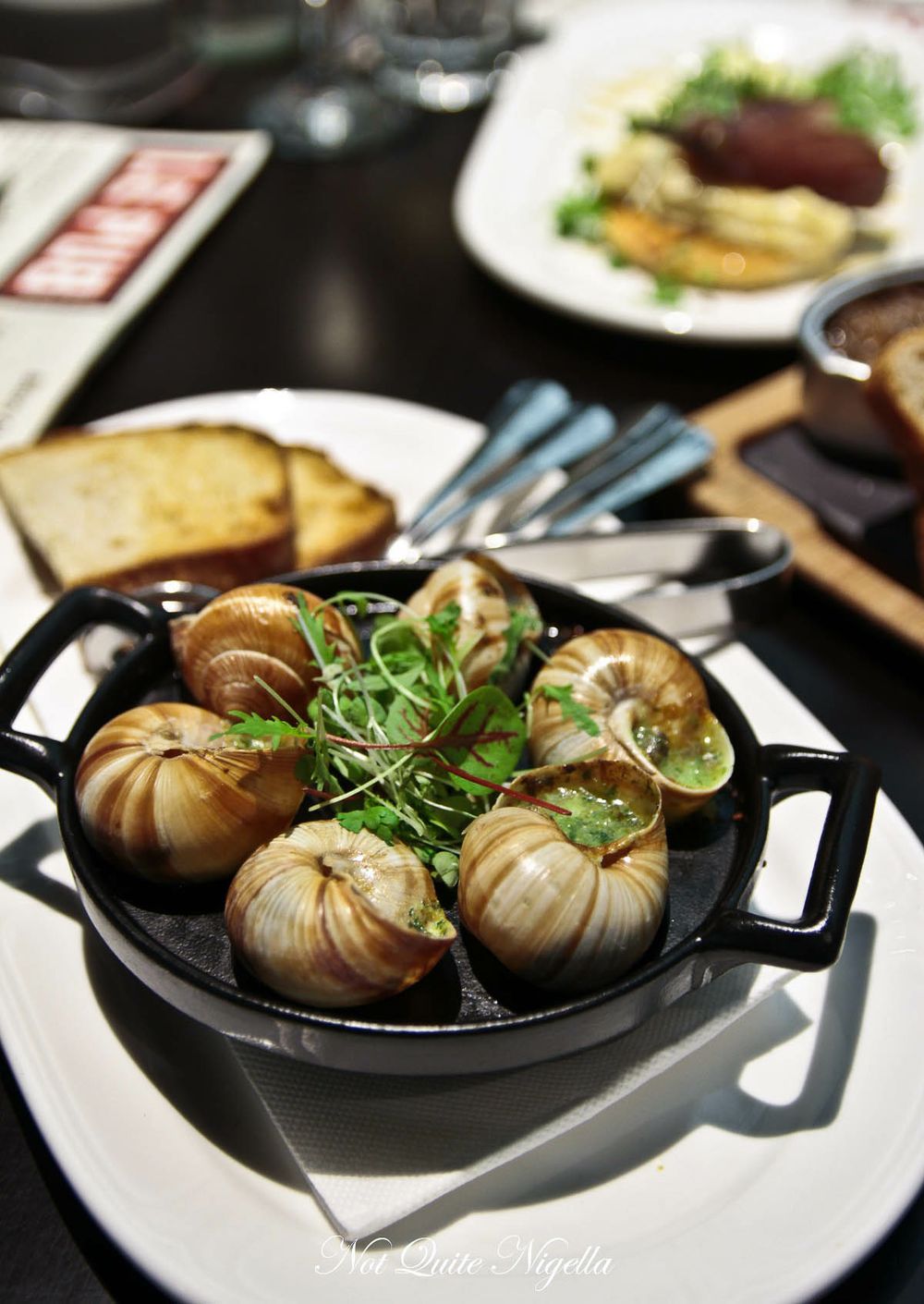 Yes I am guilty of having studied the menu and thankfully I have a group of diners that graciously let me steer them towards certain dishes or perhaps it was coincidence that we all wanted the same thing. I love escargot and my hunger shuts down the part of my brain that remembers how to use the escargot tongs. I get there eventually and I bring a shell to my plate and a tiny fork and prise the meat out of it releasing the garlicky herby oil and juices onto the bread on my plate where it soaks it up like a sponge. The escargot are tender and the garlic butter soaked bread a pleasing follow up mouthful. 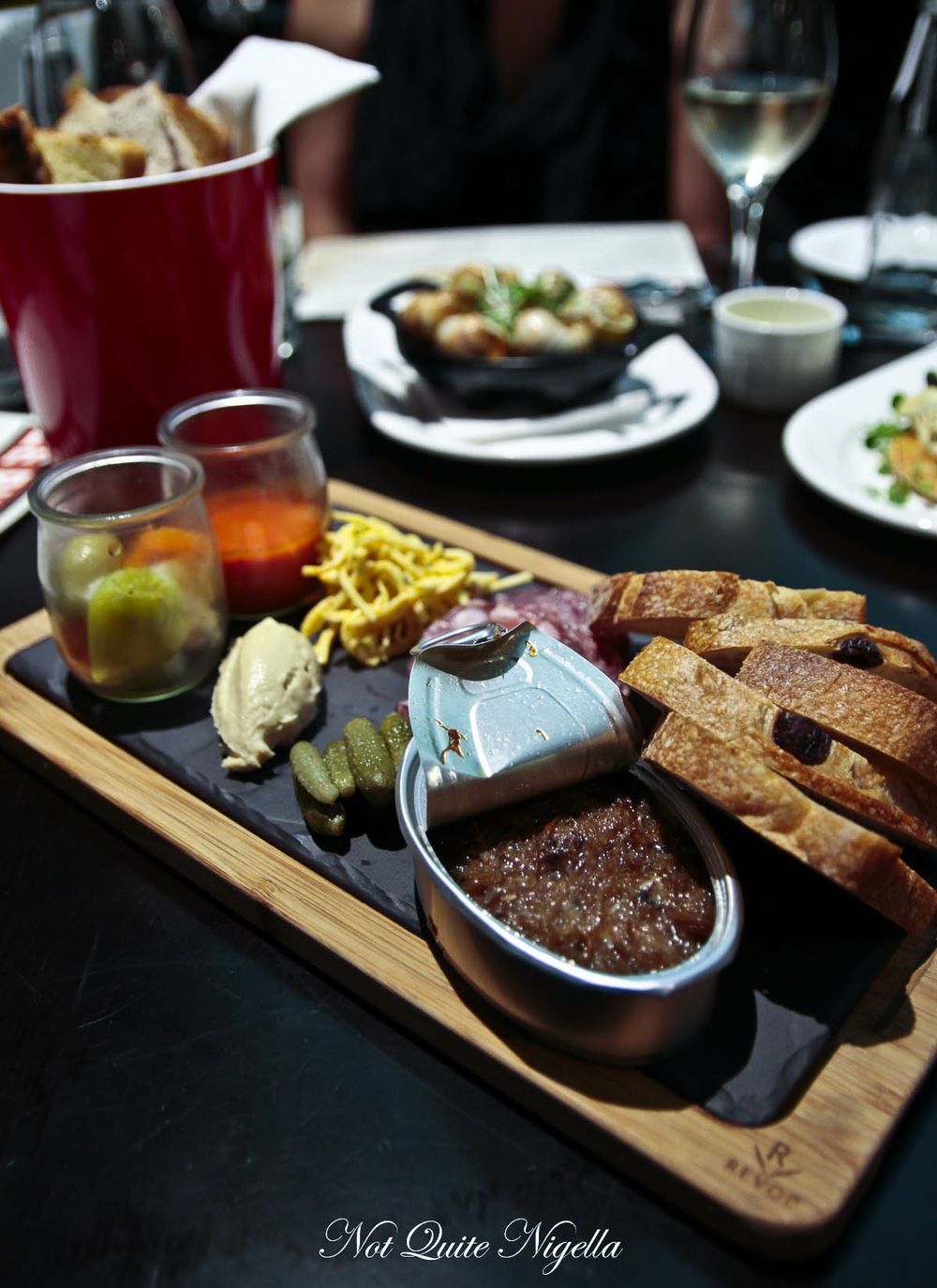 There is a cast of thousands on the charcuterie plate. There is home made duck rillettes served in an opened tin. Next to this are breads, cornichons, saucisson, a smooth parfait, a mustard remoulade, a small jar of images and a very mild red pepper sauce. I particularly like the soft rillettes, saucisson and parfait and the little bits and pieces on the plate enhance them. 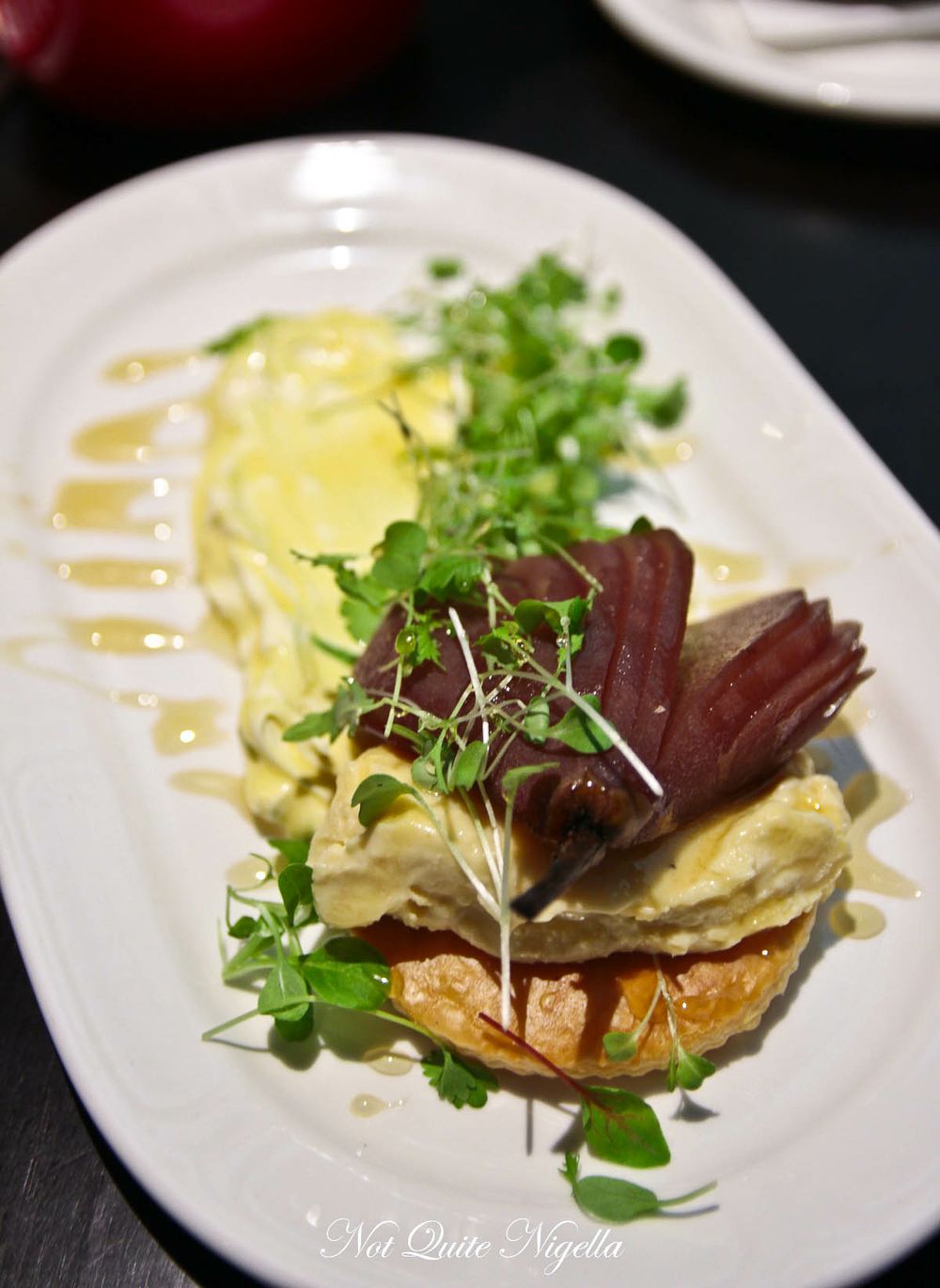 The pear and roquefort tart was ordered for Jennifer and it's the only vegetarian entree on offer. It's a goody with very light and flaky pastry, a generous amount of melted roquefort  and a red wine poached pear for contrast and sweetness. 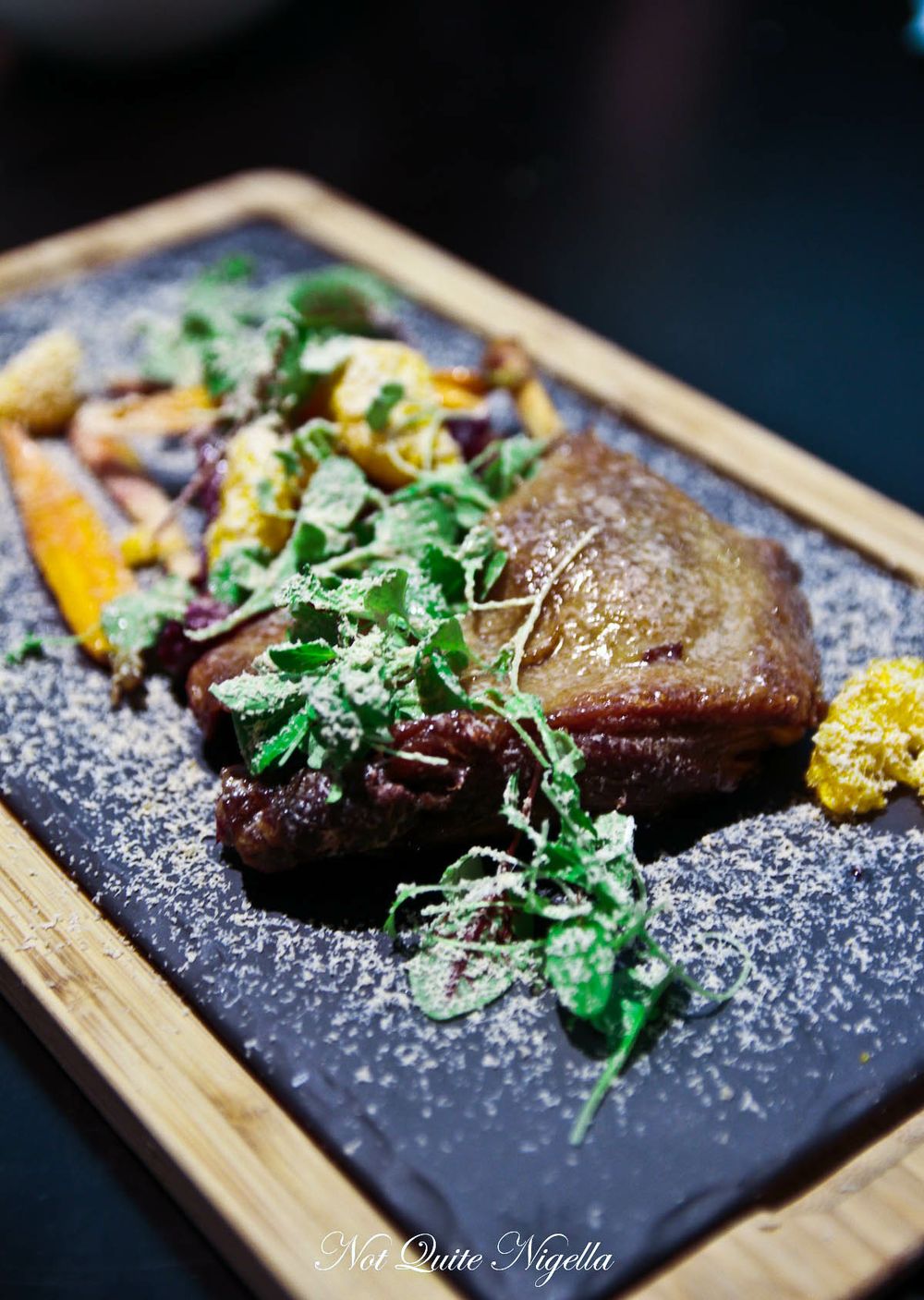 There were certain come-hither smells around when we were ordering and the pie was one and the duck another. For pub table service the prices are excellent, particularly for the fare on offer and the duck confit was a good example. The duck was juicy and yielding under the knife and on top was finely shaved foie gras that added so much aroma and flavour to the duck. It came with sauteed spring vegetables, jus and some rather delicious dehydrated mandarin segments which added a lovely hollow crunch and sweetness. 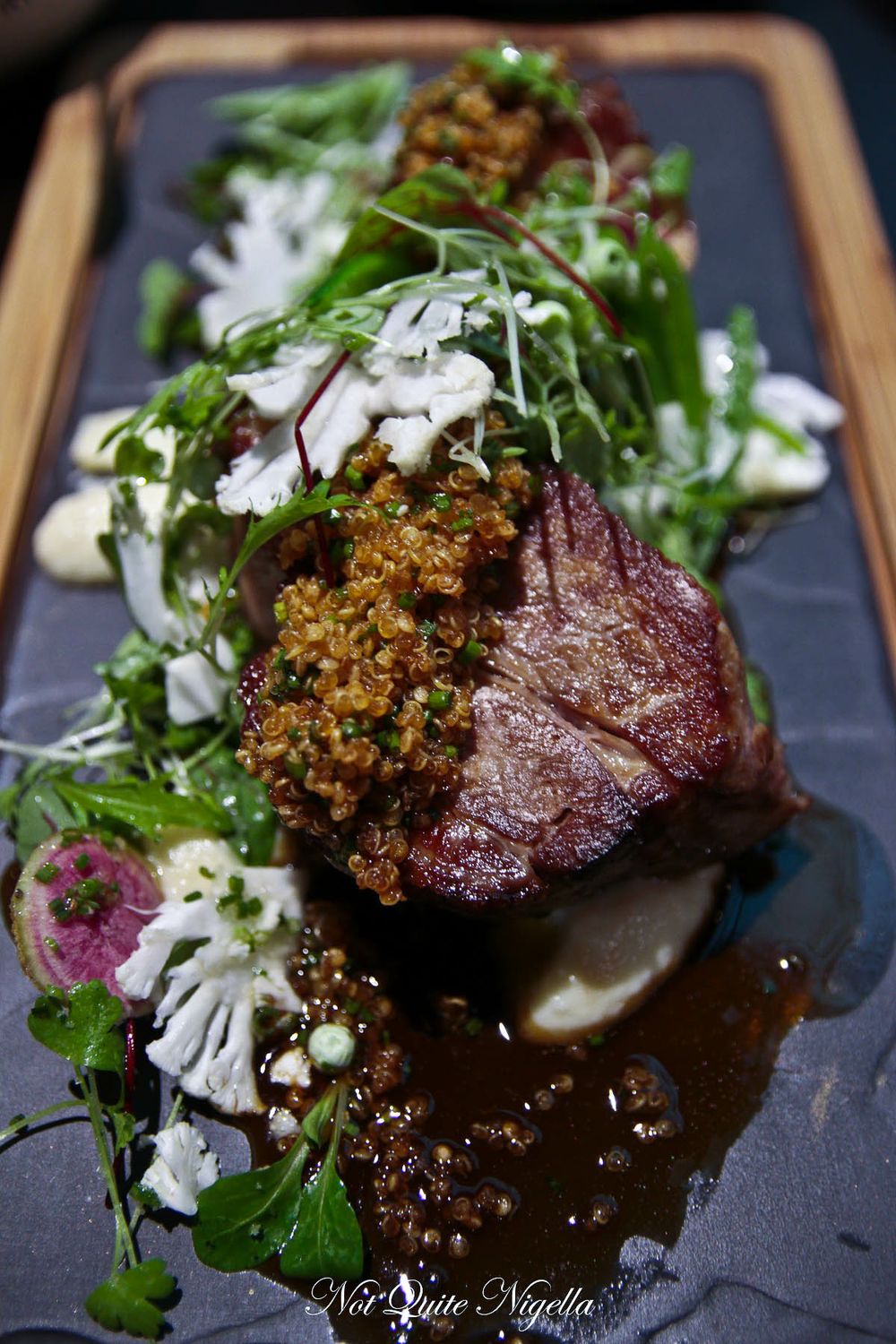 My lamb neck came as a huge portion with three large pieces of slow cooked lamb neck with a crunchy quinoa and herb crumb, cauliflower puree, shaved cauliflower and pea salad. The lamb itself was very soft but needed some seasoning added to it but it is very filling and a generous portion. 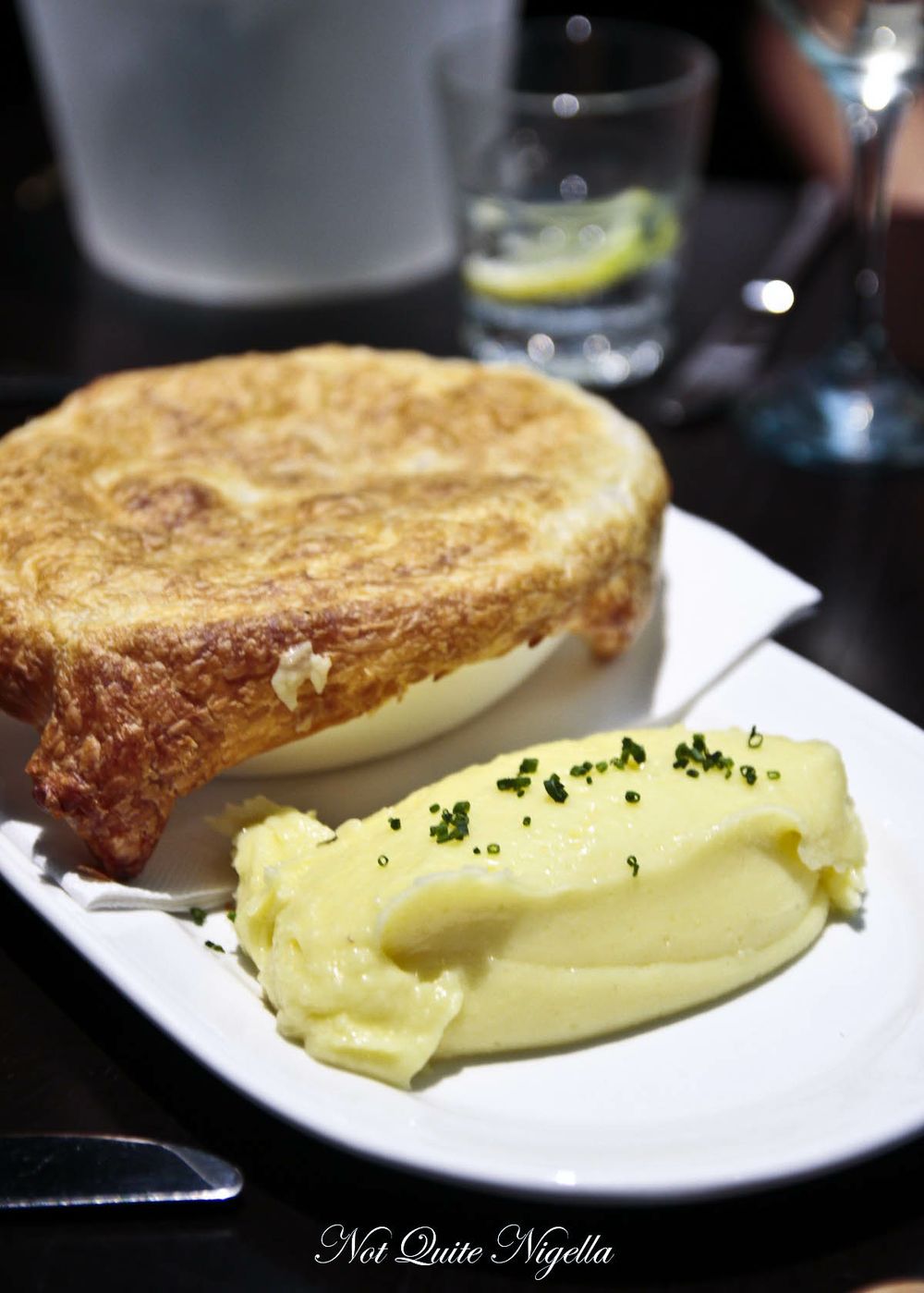 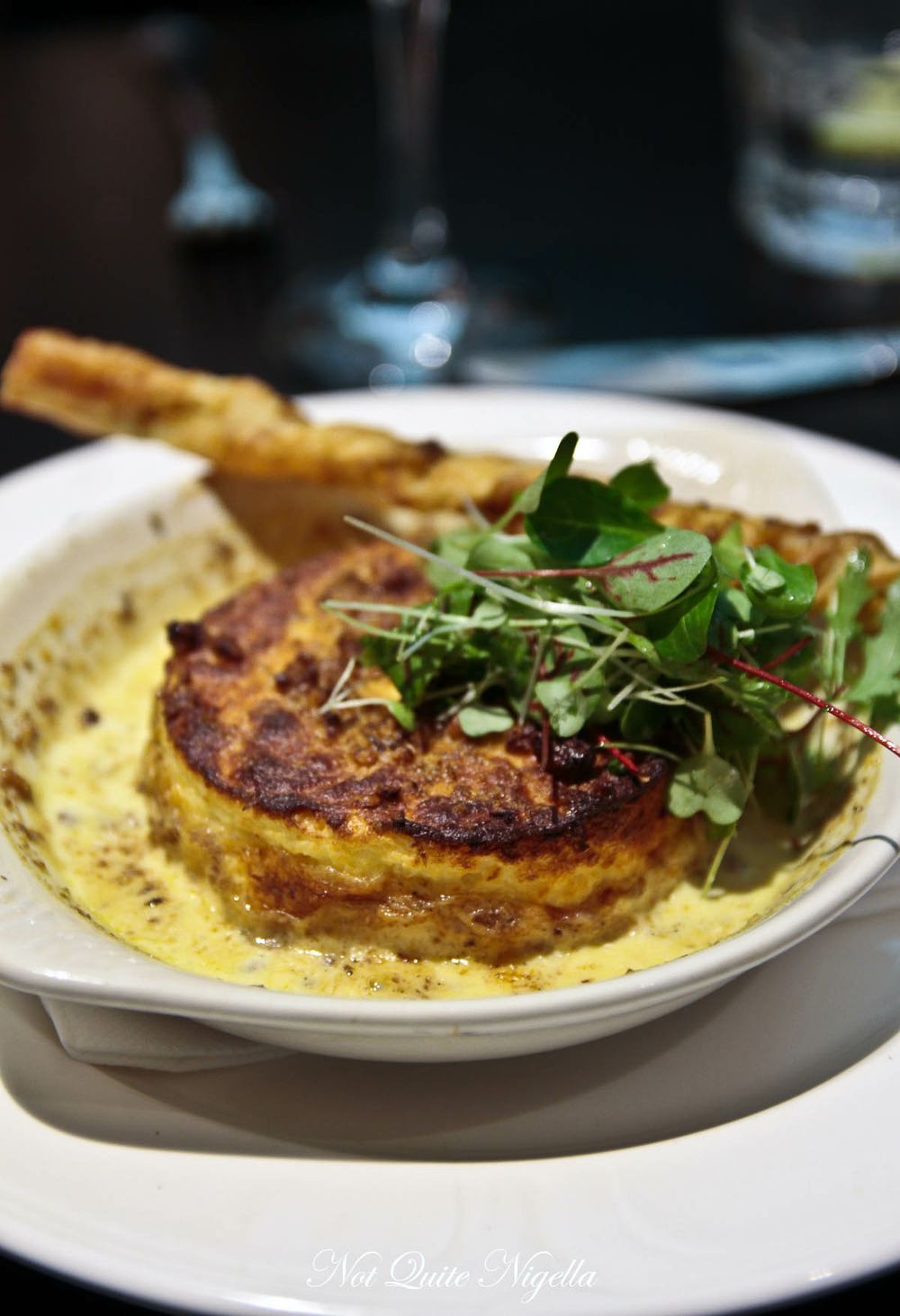 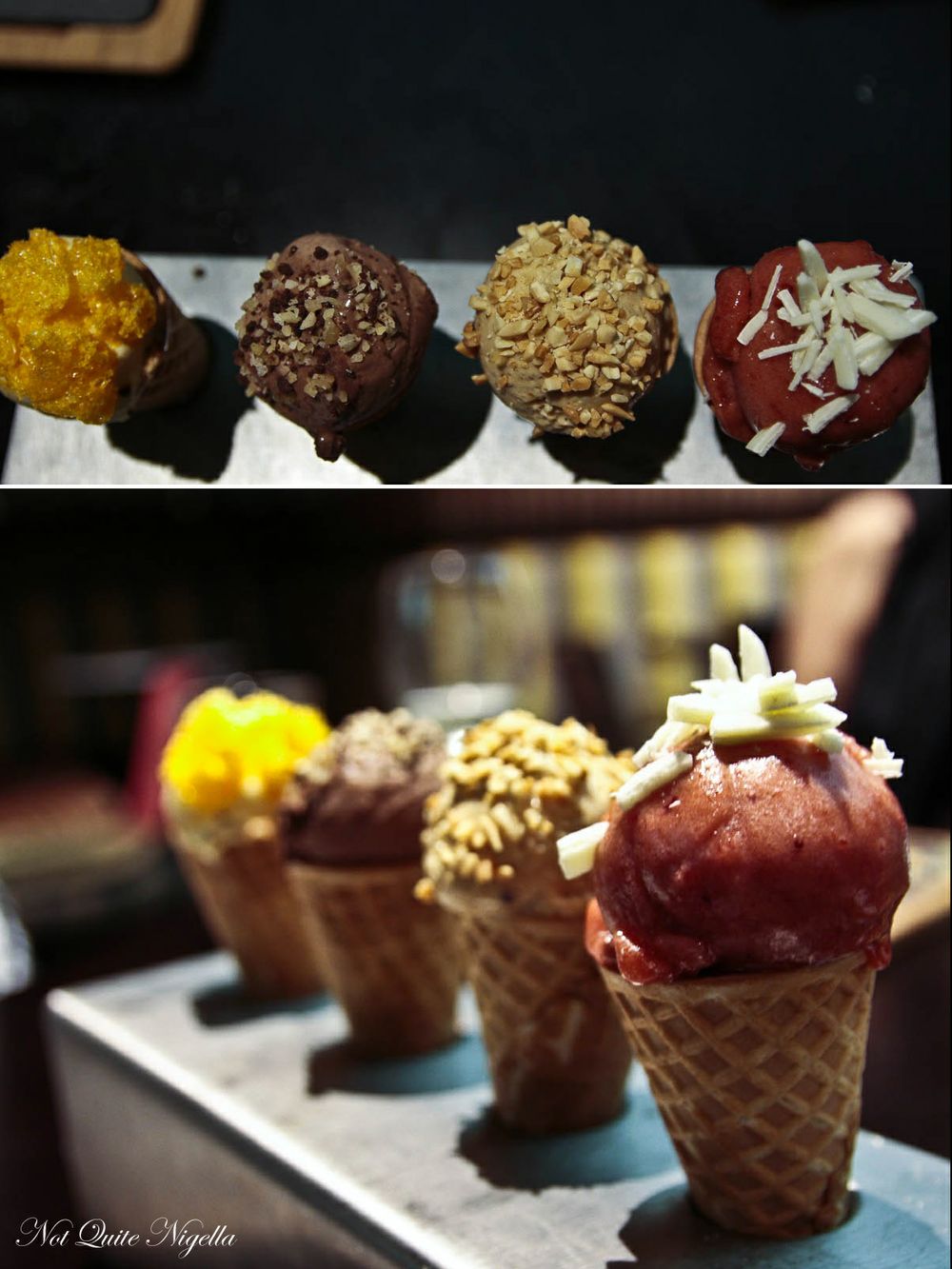 Thankfully there is also time for dessert and there are four to choose from including French cheeses. I kept seeing tray after tray of these come out to tables and there were four different varieties of ice cream and sorbet. They're not made in house and the flavours can change but ours was orange & Grand Marnier with freeze dried mandarin (which was my favourite); Belgian chocolate and chocolate popping candy; prune and Armagnac with crushed peanuts and strawberry and balsamic sorbet with white chocolate. 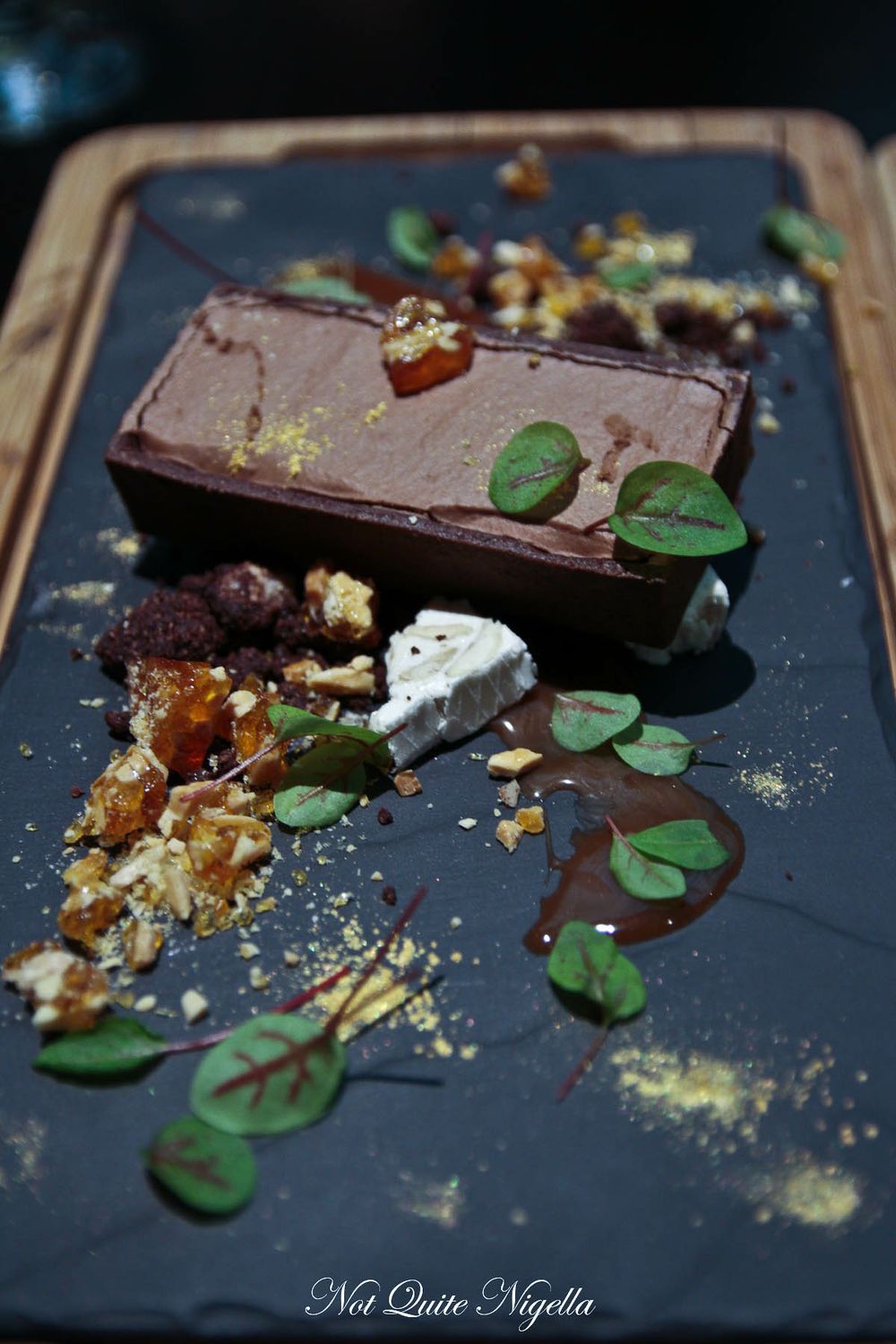 At the centre of the plate was a chocolate tart with solid chocolate outside and a rich, creamy chocolate centre. With it came some excellent nougat, peanut praline, chocolate soil and gold dust. It was rich and full of textures but once the petit four plate was set down I had eyes for that. 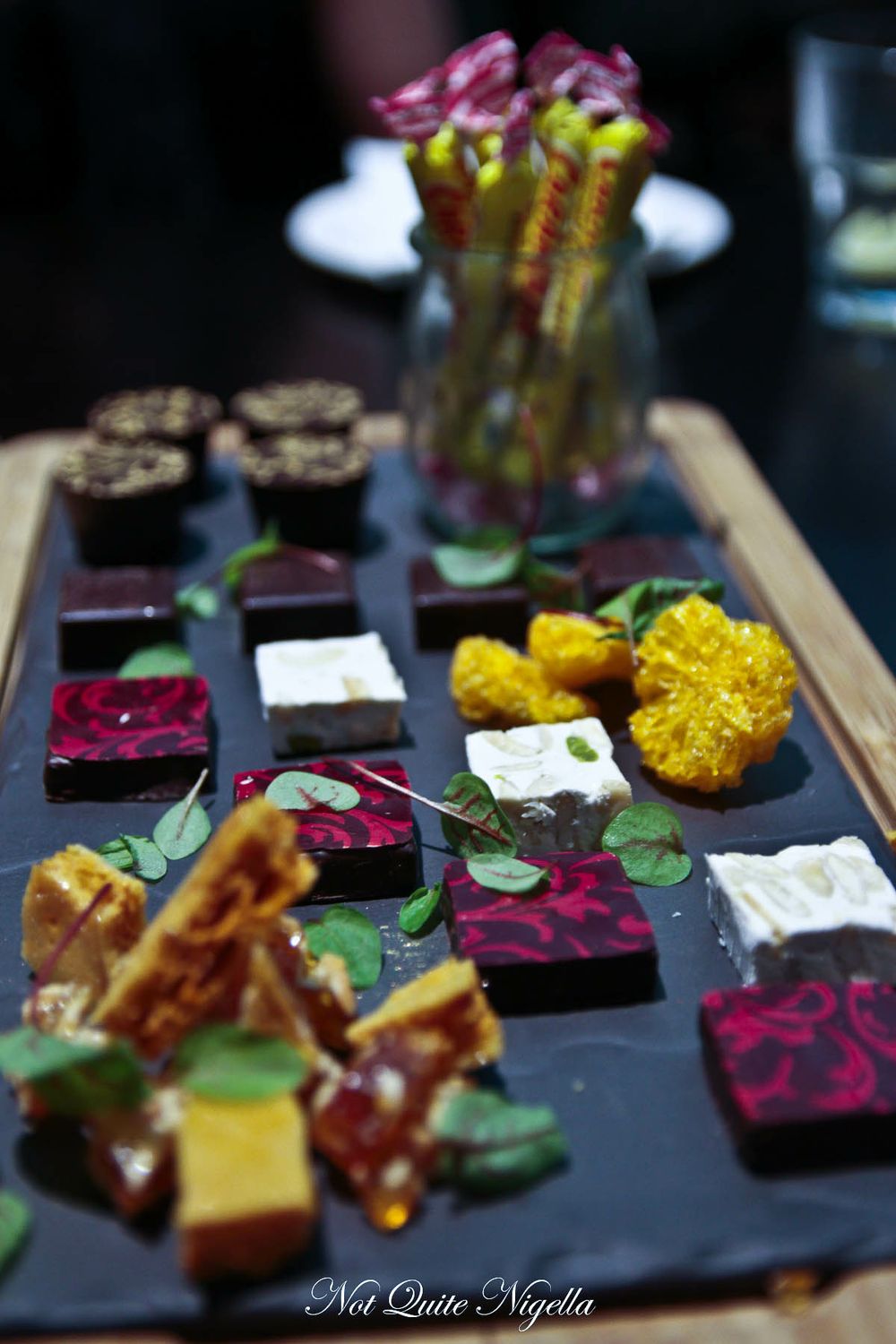 I went straight for the nougat and then followed it with some honeycomb, a blackcurrant gel centered chocolate and then a cinnamon scented chocolate, a dried mandarin segment and some Carambar caramels.

And after all of that, we got all the business of the meeting done too! I couldn't help but think that all meeting should take place over meals...

So tell me Dear Reader, do you take photos of your meals? And do you ever order something because you like the smell of it at another table? 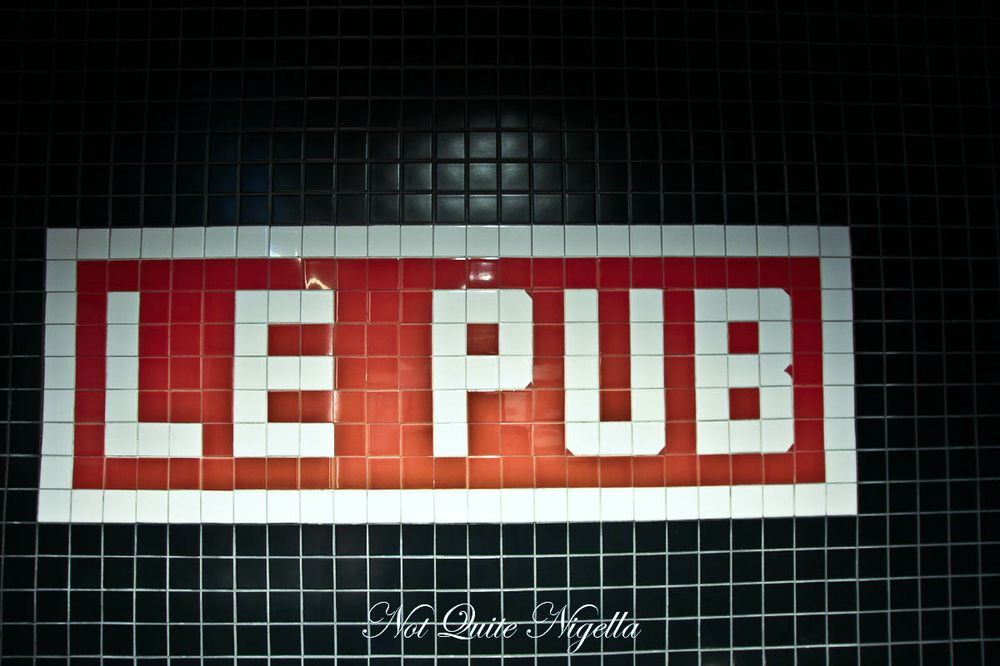