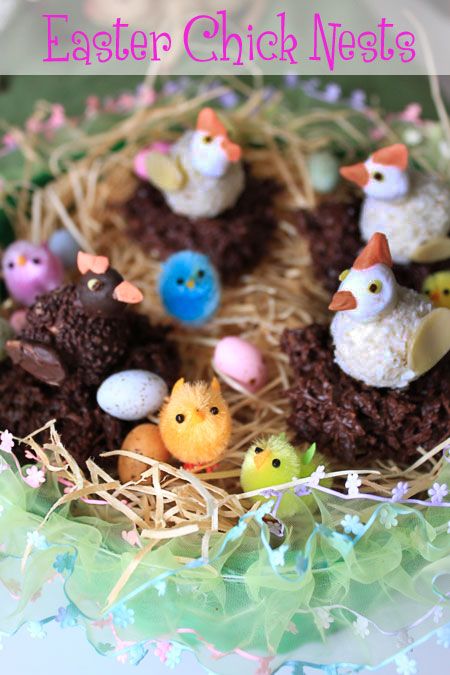 I was talking to Liss on the phone as I do - one of our marathon 2 hour calls during the time in which her twins are eating or busy with something else and we were discussing among many other juicy things, what we were making over Easter. I knew what I was making but since I had just gotten back from a trip to New Zealand, I felt like a squirrel on a treadmill where I just wasn't going to get there. I was originally inspired by Nigella's Easter Egg nests that she made using shredded wheat and chocolate and filled with speckled chocolate eggs. 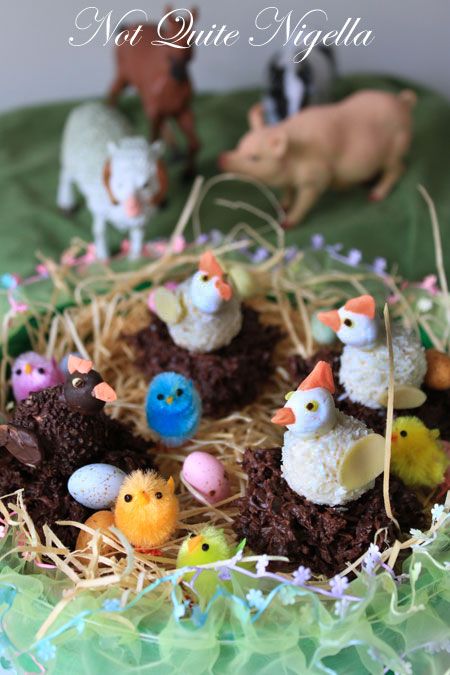 I was going to pipe a hen with meringue but would have had to have filled two piping bags with meringue mix, one with a big tip and one with a smaller tip and since the idea of doubling the work seemed insurmountable, when Liss suggested I use pre bought chocolates like Raffaellos and Rondnoirs I went for that immediately. They were ideal as they have that textured detail simulating feathers and since the nice people at Ferrero sent me a box that came up to my waist for Christmas I had some in stock. It is a fiddly process certainly, but the hardest part is the tiny eyes. You could of course use larger Easter eggs to make it less fiddly and substitute the almonds for pecans as wings. 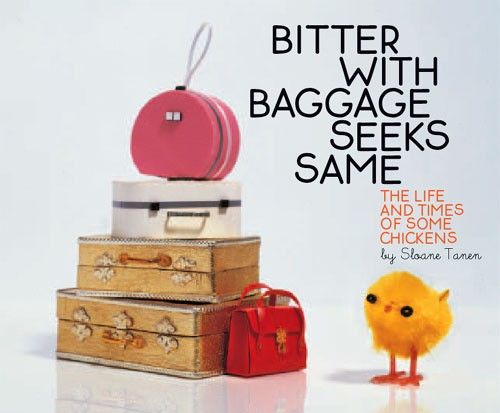 I must admit I do have a little obsession with these chicks - take last year's story on Easter Basket Cupcakes. I have a set of these chicks sitting on my bookshelf all year round and I add to my little collection every Easter. Be warned though that like Gremlins, never get these little chicks wet as it will be the cause of certain death. What I like about them is how each chick does seem to have its own distinctive expression and one of my favourite books is Sloane Tanen's "Bitter With Baggage Seeks Same" as she is what I feel a kindred spirit in chickdom.

I even had a fluffy little real chick of my own when I was young (after my parents gave up on the goldfish which were sentenced to death by overfeeding). We called it Diana after Princess Diana. Whilst Diana's time with us didn't last that long as she would soon grow up what we didn't expect was for her to become a Rooster. Our Diana ended up being a boy and we ended up giving her to my parent's friends who called her Henry (and did she ever have gender identity issues?). Still, I like to think that she or he remembered us fondly.

So tell me Dear Reader, what was your family pet or pets growing up?]

And have a lovely Easter break Dear Readers! I hope it's filled with wonderful times with family, friends and food. Drive safely and as always NQN will have stories all through the weekend :)

This is my entry for the lovely Faith and Nutmeg Nanny's Easter All through The Year Cheer event! 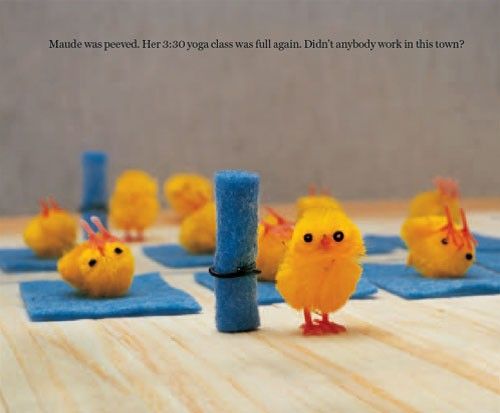 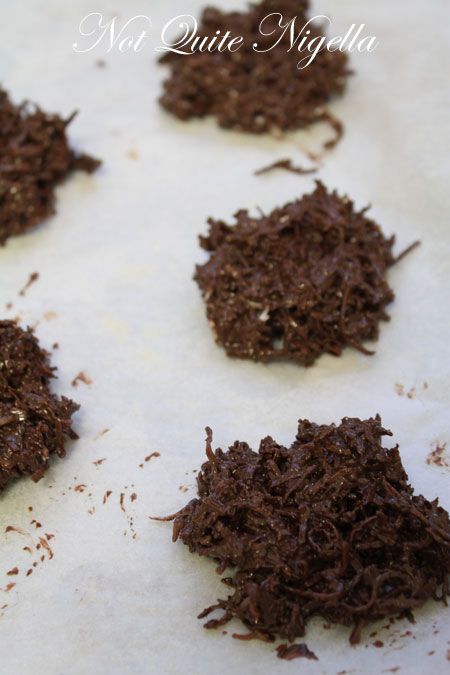 Step 1 - Line a baking tray with baking paper. First melt the milk chocolate in a microwave or a double boiler. Once melted and smooth, mix in the coconut and place rough circles on the paper to approximate nests. Place each of the Rondnoirs and Raffaelos in each nestling them into the centre. 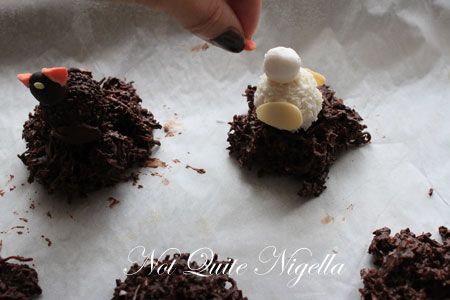 Step 2 - Roll 6 balls of white fondant in a smaller size than the Raffaelo (this is for the head). Melt the white chocolate in a microwave or a double boiler. Affix an almond onto each side of a Raffaelo  like a wing and attach the head to the body with white chocolate. Allow to set. 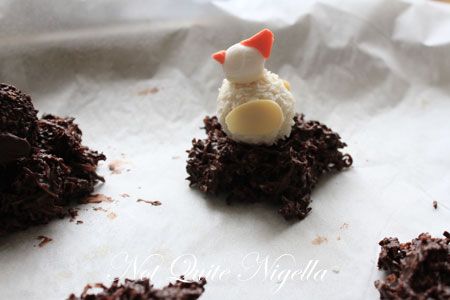 Step 3 - 2. Roll 6 balls of chocolate fondant in a smaller size than the Rondnoir (this is for the head). Melt the dark chocolate in a microwave or a double boiler. Dip the almond into the dark chocolate and then affix an almond onto each side of a Rondnoir like a wing and attach the head to the body with dark chocolate. Allow to set (don't throw out the leftover milk chocolate, you can use it to make the iris of the eyes as you'll only need the tiniest amount). 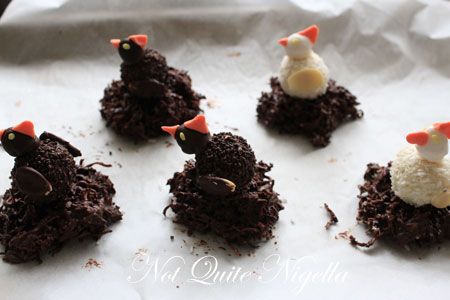 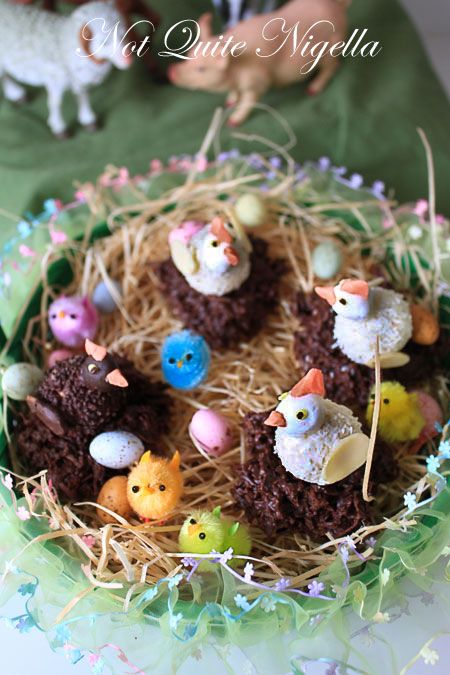