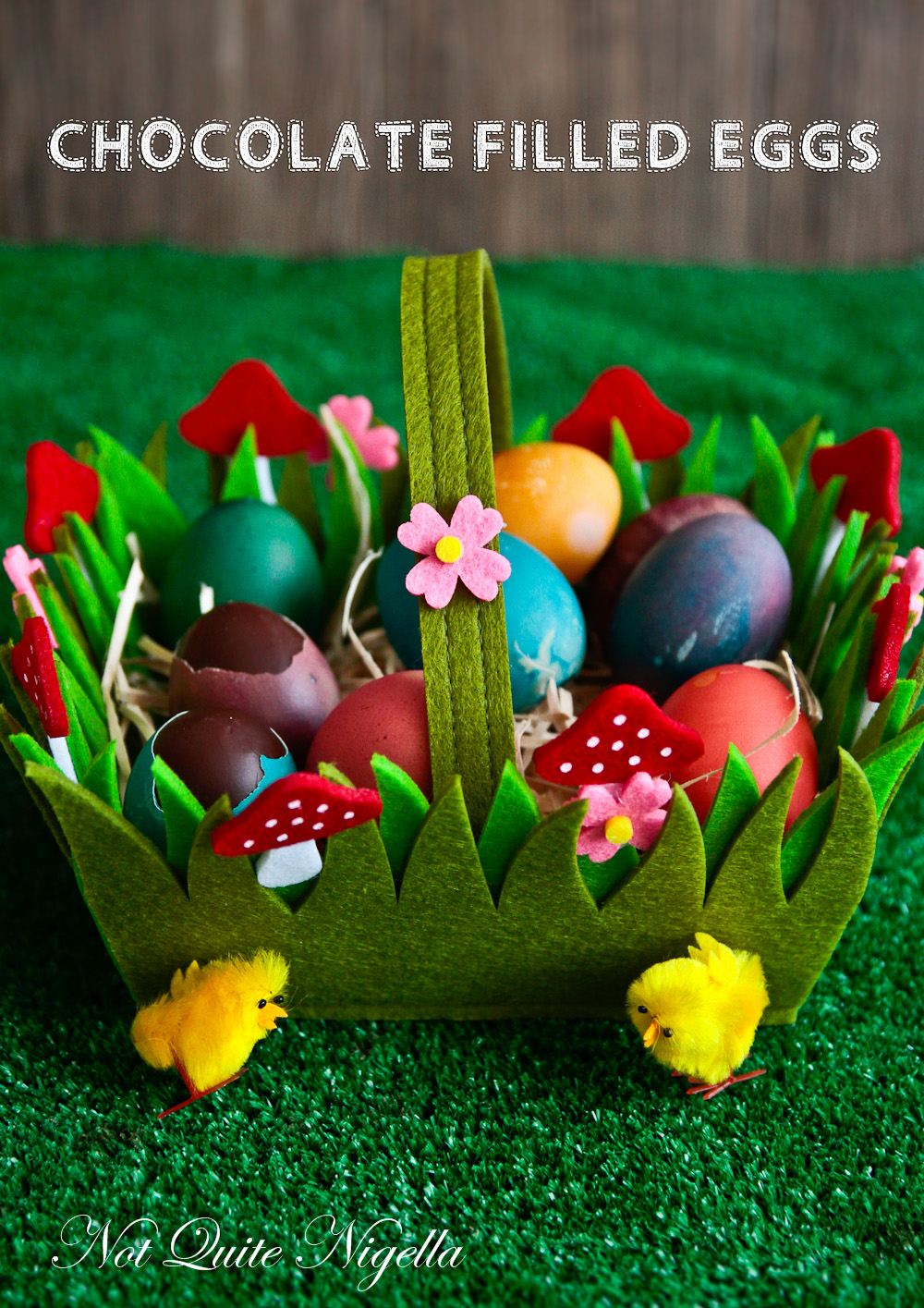 My husband Mr NQN loves provoking and joking with people. And by people I mean his family. This comes from a man who says very little most times and the tricks are often delivered with a twinkle in his eye and the curled edge of a smile. One of his favourite subjects is his mother, the well meaning but rather exhausting Tuulikki. And there's no better time for hijinks than April Fool's Day.

"Have you ever tried playing Angry Birds?" he messaged her. He loves the game where birds hurl themselves at pigs giving them black eyes and crushing their homes. For the vegan Tuulikki it would no doubt alarm her that such a game existed. She is such a committed vegan/vegetarian that even the family dog Halli was fed nothing but vegetables and rice and although the children weren't allowed eggs, the dog was allowed a couple of boiled eggs from their own chickens as protein.

She answered Mr NQN back with "Thank you! I can see that they have this in the shop so I will look into it and let you know later how I enjoy it :) x"

Then came an alarmed message from Tuulikki. I knew from the chuckle from Mr NQN that Tuulikki had responded.

"I will give Angry Birds a miss!! I think it is damaging to children especially as in one game players can kill pigs and eat them..."

Even a virtual pig is a pig for Tuulikki. And I'm sure that these eggs wouldn't pass her muster as they're made with real egg shells. Mr NQN's cousin in Finland had gifted us with some chocolate egg shells filled with chocolate gianduja by Finnish brand Fazer. These Mignon eggs are said to be very popular and they sell about 2 million a year. When you peel back the white shell, you reveal the rich solid chocolate almond nougat filling. 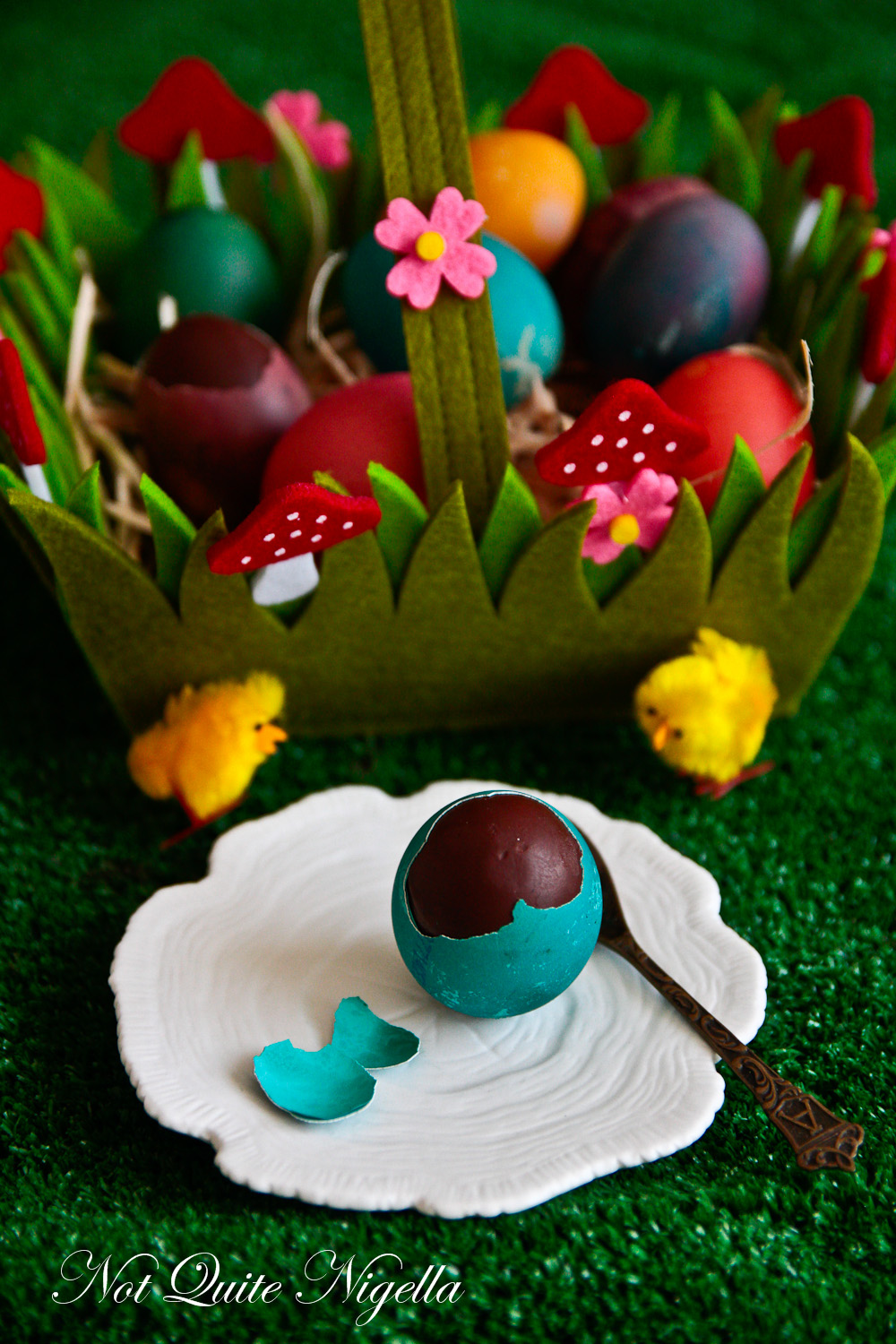 After swallowing one practically whole, I turned another one over. "How does this happen?" I said to Mr NQN who was busy eating another one so he didn't really care. I wondered if I could make my own except with coloured eggs. I've never actually dyed eggs before but I looked up how to dye eggs and it seemed relatively simple.

Once the eggs were dyed, filling them was almost too easy. The entire time I expected something to go wrong so that's why there aren't that many process photos but it was just a matter of really just piping melted chocolate in the shells. The amount of chocolate needed is easy to calculate as the eggs are sold by weight. And of course if you have very pretty coloured blue or brown speckled eggs you could leave them as is without dying them. You could even do these with quail eggs or duck eggs. Better still you also don't need to buy Easter egg molds, all you need are eggs!

So tell me Dear Reader, do you eat more hot cross buns or chocolate during Easter? Have you ever dyed eggs? And is Angry Birds too violent for you? Do they really eat the pigs? I've never gotten past the first few levels!

And a little P.S. about Halli who passed away a few years ago. Alas when Tuulikki's meat loving son in law Laporello looked after Halli, he fed her frankfurts and she became addicted to them eschewing the rice, vegetables and eggs.

Preparation time: The eggs are best coloured a couple of days ahead so that they have time to dry out. When it comes to filling, it takes about 15-20 minutes to fill 12 eggs with chocolate.

Step 1 - With a sharp knife or a box cutter, chip away at a point at the base of each egg. Gently peel away a small circle using your fingers. Don't make it too small - the smaller the opening the harder it will be to fill with chocolate but you also want to be able to see the egg shape.

Step 2 - Using a chopstick or a skewer, gently poke at the yolk trying to break it up. The egg should easily slip out of the whole. Make a giant omelette or save the eggs for cooking at a later time.

Step 3 - Rinse out the eggs under hot water shaking them gently to remove all of the water and the inside coating. Use the egg carton to hold them. 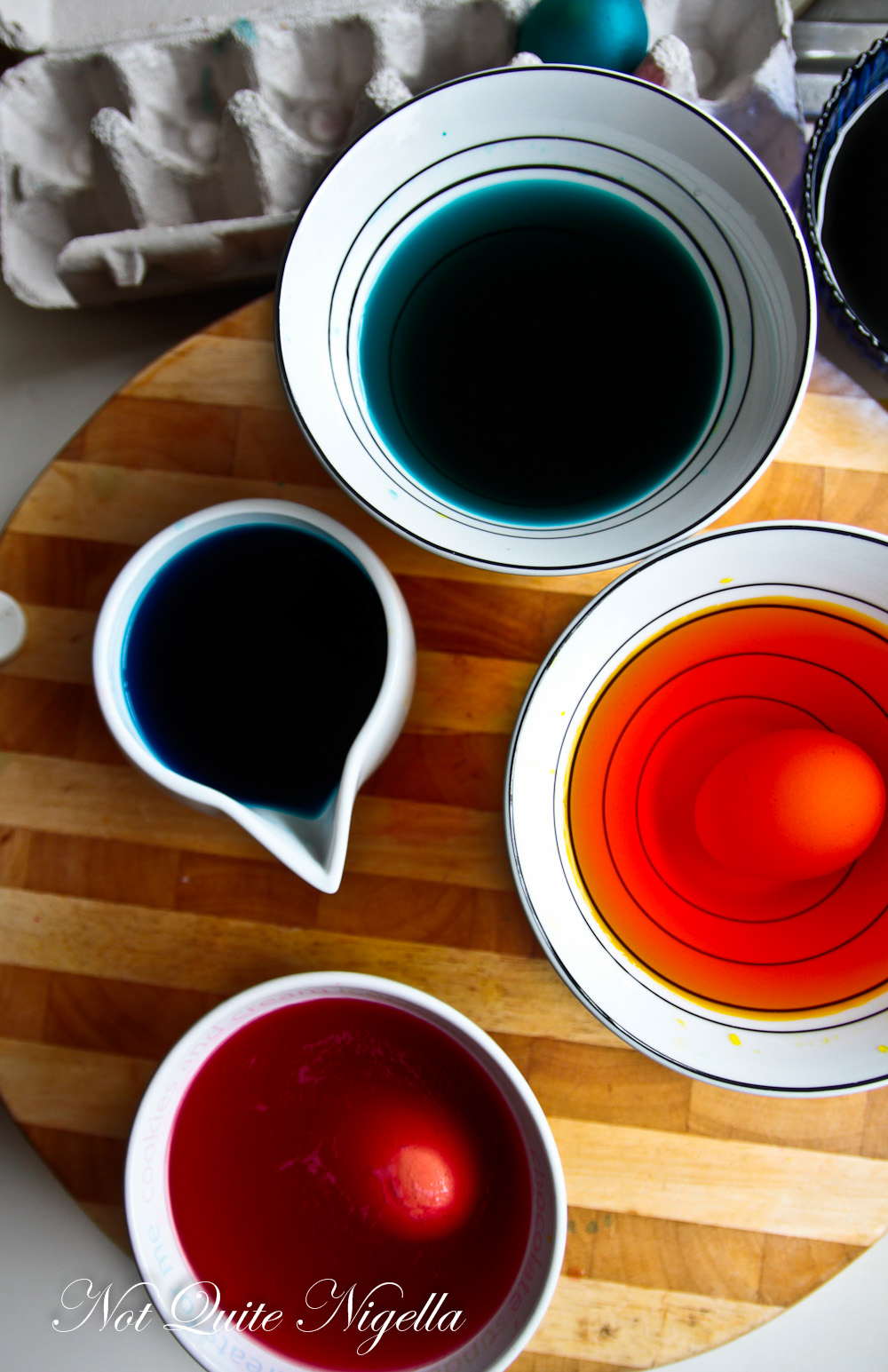 Step 4 - Place 2 cups of water and 1 tablespoon of white vinegar in several bowls - enough bowls to make the colours that you want. Add food colouring - about 2 tablespoons should dye the eggs quickly and with a good strength of colour. Submerge the eggs completely-the hole will help submerge them.

Step 5 - After 10 or 20 minutes remove the eggs and make sure that there is no water inside the egg and place in the cartoon hole side down. Dry overnight or for a day or two. 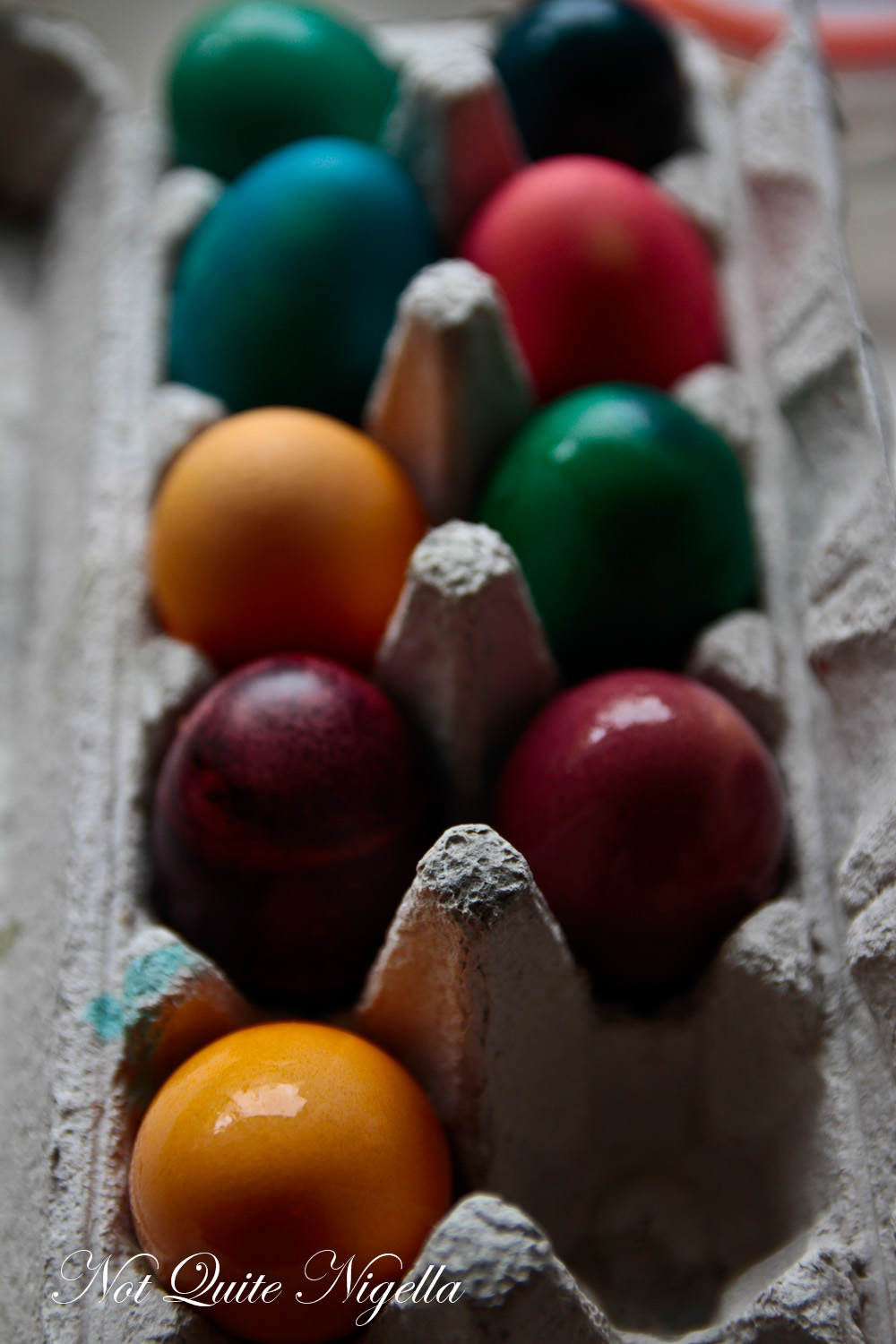 Step 6 - When they are dry, melted the chocolate in a double boiler or in a microwave on 60 second 50% power bursts until melted. You don't really need to temper the chocolate as it is best eaten when slightly soft but you do want it quite glossy for appearance which is what the coconut oil gives it. When almost melted, add the coconut oil. This makes the chocolate a bit softer to eat as it is a solid egg and also gives it a lovely coconut flavour.