Adorable Marshmallow & Popcorn Easter Lambs & The Cook With Me Project! 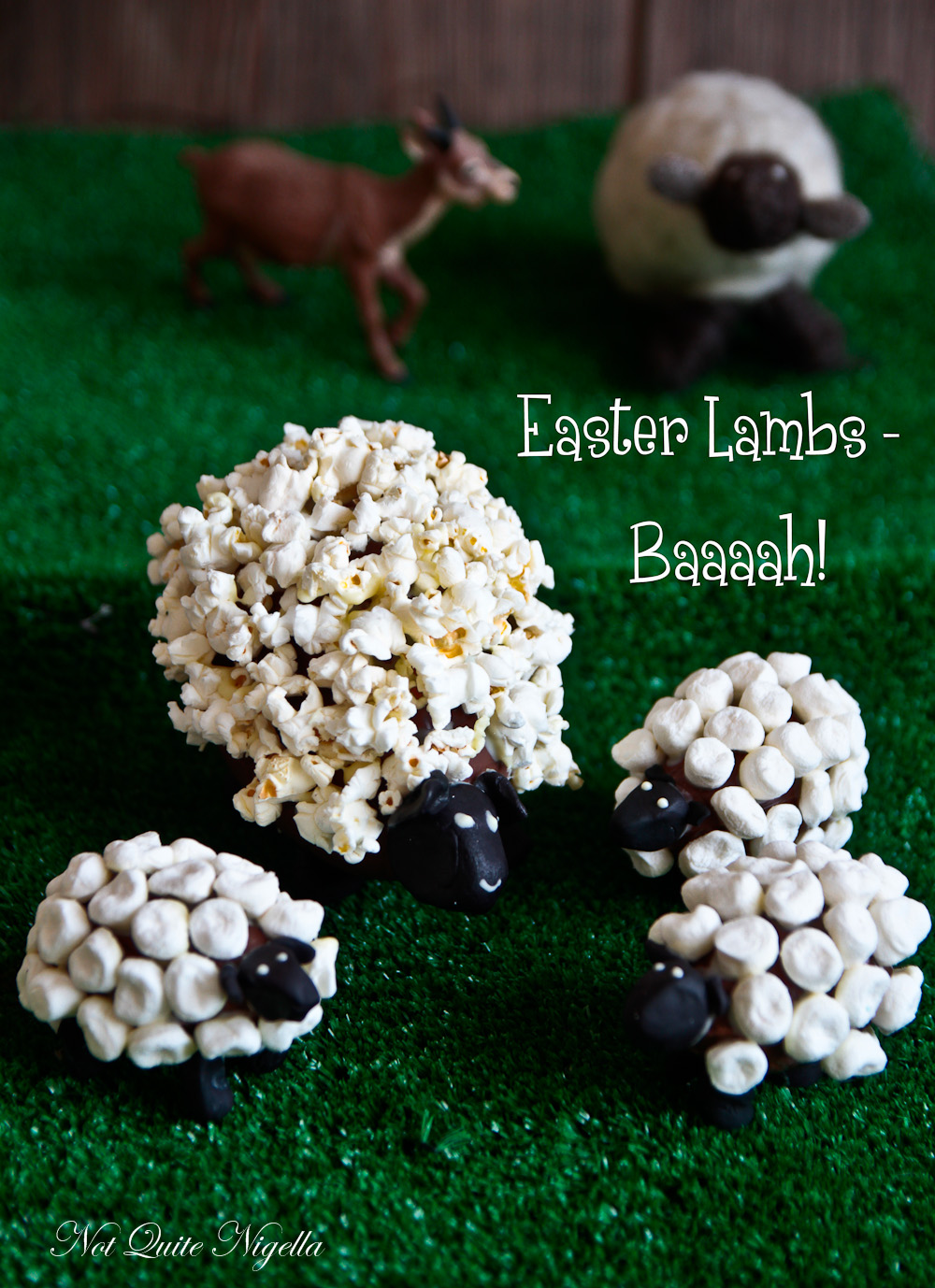 These chocolate marshmallow and popcorn Easter lambs are one of the easiest and most fun Easter projects around. Delicious as well as adorable, they involve sticking mini marshmallows to simulate fluffy wool for baby lambs and for the larger mama or papa sheep, popcorn!

Growing up, my parents were naturally thrifty people. It really came from them living through the war. Our generation and younger generally have no concept of what it is like to go through a major war. To have money and then to not have it, well that's got to be tough. And to me, my parent's habits were just things that I thought were strange and that I didn't quite understand.

For example, my mother would wrap presents using tiny pieces of 1 centimetre or half an inch long pieces of sticky tape. As a result the sticky tape would last about 10 years and at about the fifth year was where it would go all strange and peel off in tiny little strips. Whenever we would wrap presents, we would spend ages trying to grab the last little bit to peel off some more, only to get these little shreds.

And whenever my dad drove anywhere, he would use the indicator for as short a time as possible. "You'll flat the battery!" he would cry when we would switch on the light to read a map. They were the original environmentalists/frugalists. Even now, I use the phrase "You'll flat the battery!" to Mr NQN when he leaves things running. You can make the kid grow up but the kid may not forget childhood habits. 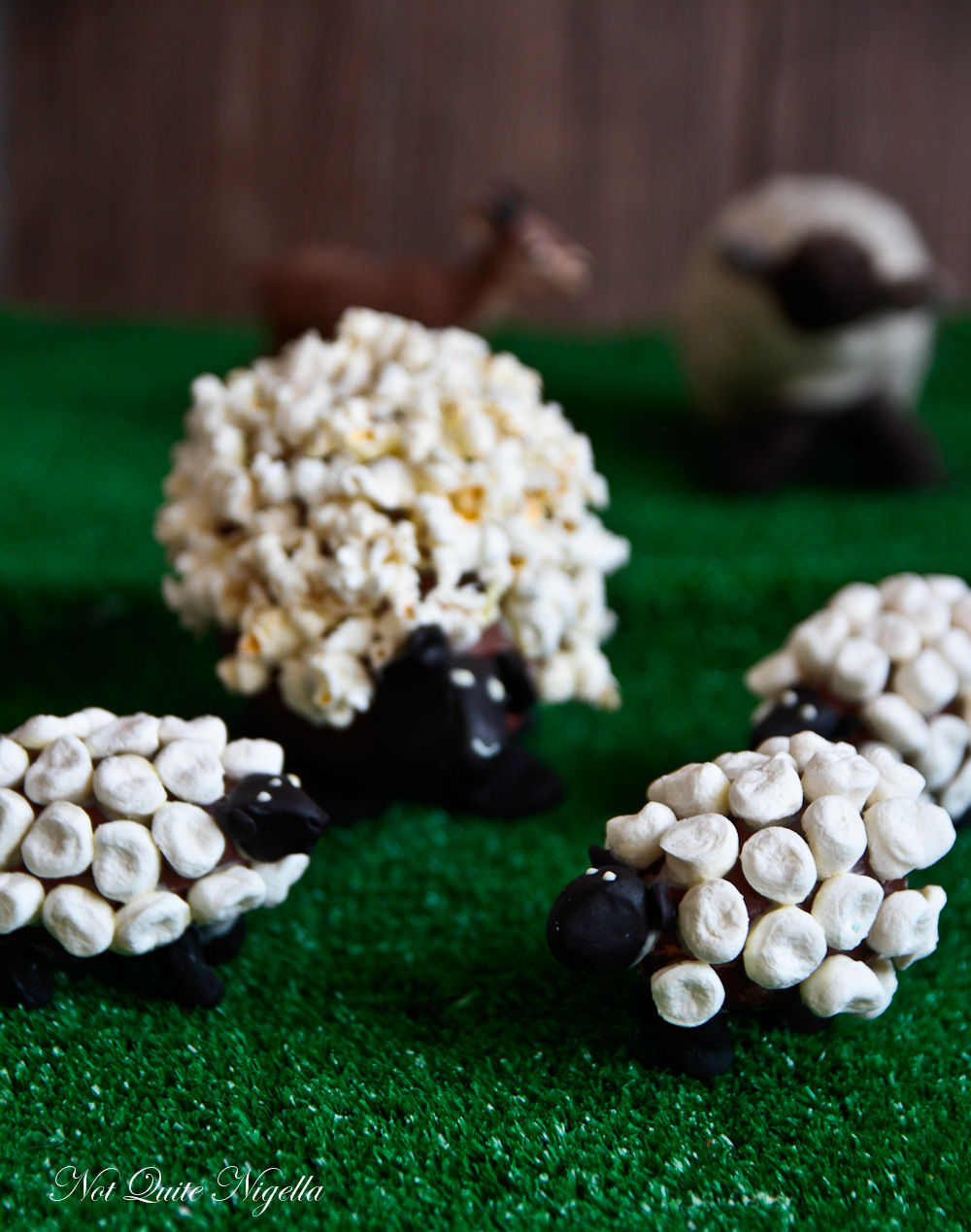 I was reminded of a project that we did when were little when a Dear Reader Sally sent me an Easter idea. Hers were of Easter lambs with royal icing swirls drawn on them. They triggered a memory of sticking cotton balls onto a piece of paper and drawing a head and legs to make a lamb and then my brain merged the idea of a chocolate egg with marshmallows and popcorn.

This is both easy and fun for kids and adults. They're adorable as an individually boxed gift (and they have padding from the marshmallows!) and kids can certainly create their very own lambs. You can also have fun playing with the colours of the sheep too (black sheep is also an idea with chocolate marshmallows). The fun is of course in the activity and eating!

Also Dear Reader, I wanted to tell you about a fun idea that I came up with recently that I am really hoping that you will like! It came to me after the lime and chilli chicken recipe went gangbusters and there were dozens of people that made it and sent me photos of their creations on facebook, instagram and by email. I thought that it might be a fun idea if we could cook something together! 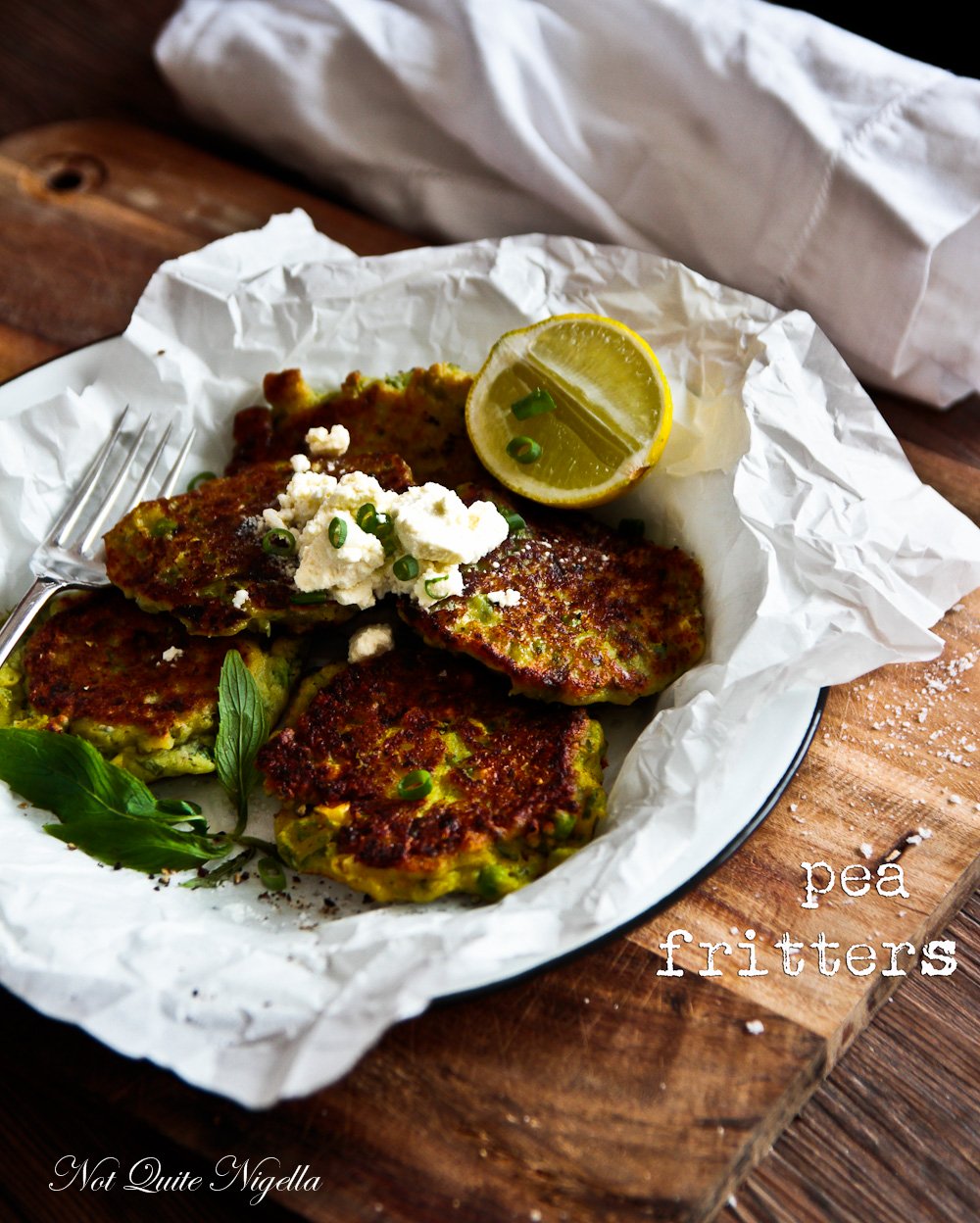 The idea is that once a fortnight or month, on Monday or Tuesday I'll put up a picture and description of a recipe. It will be simple and very doable, much like the lime and chilli chicken recipe. I'll also put up a list of ingredients to make the dish. If you like the sound of it, you can pick up the ingredients when you next go shopping if you don't have the ingredients already. I'll put put up the full recipe on the blog on the weekend and then you can cook it at your leisure during the following week! I'll then put up all of your photos and comments on the dish the following week! And one random participant will receive their choice of a cookbook from a range of cookbooks, posted worldwide!

What do you think Dear Reader? I hope you'll play along! The first Cook With Me is one where people started asking for the recipe for as soon as I put a picture up. Ta-da... it's pea, corn and feta fritters. These are really scrumptious and can be eaten for breakfast, lunch or dinner (trust me, we happily ate them for every meal). The total time needed to make these is 25 minutes (10 minutes preparation, 15 minutes cooking).

The shopping list (and you may already have many of these things): 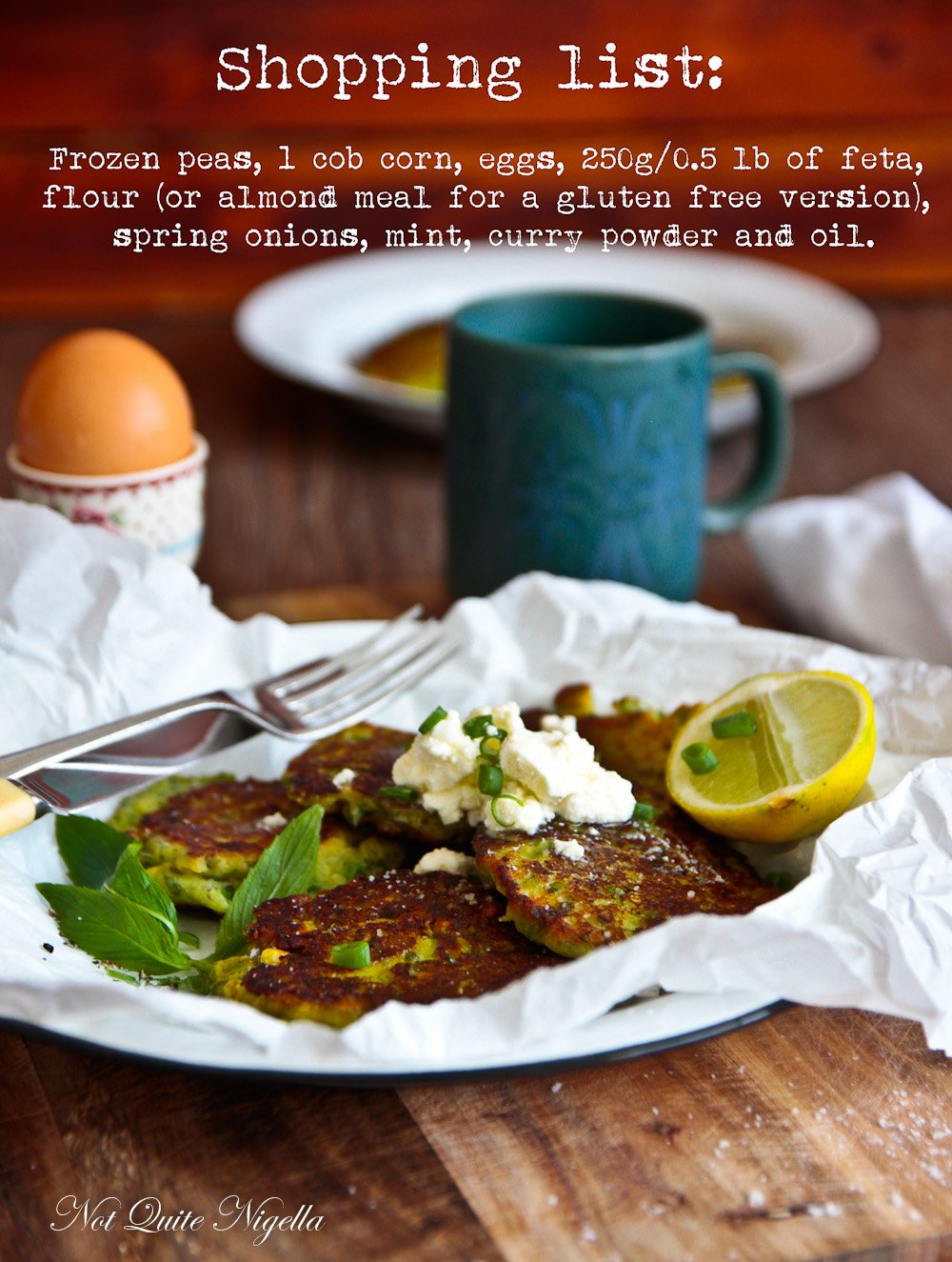 1 small bag of frozen peas, 1 cob corn, eggs, 250g/0.5 lb of feta, flour (or almond meal if you're doing a gluten free version), spring onions, mint, curry powder and oil! Let me know your pic is out there by tagging me on Instagram, facebook or twitter #notquitenigella! I thought I'd make the final date the 8th of April which is after the Easter weekend as I don't want to stress anyone out - it's meant to be fun after all! :)

So tell me Dear Reader, what do you think of the fritters? Would you make them? Is there another type of recipe you'd like to do for the Cook With Me? Do you have any thrifty habits from childhood or adulthood? 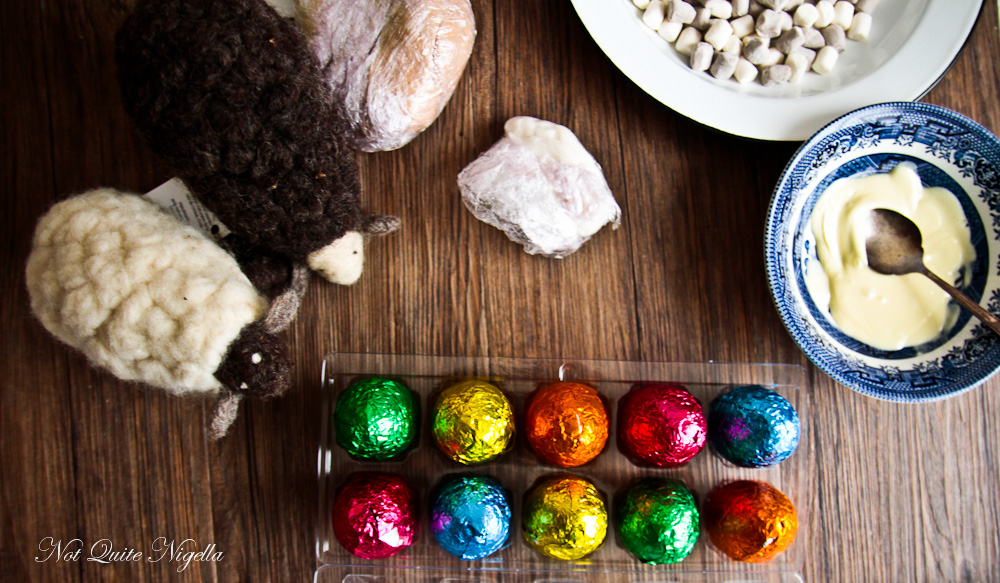 Step 1 - Pop the popping corn by placing in a non stick pan with the lid on and cooking for a few minutes until the majority of the corn has popped. You can also make a DIY microwave popcorn by placing the popcorn in a brown paper bag, folding over the top three or four times to close and cooking in the microwave for 90 seconds at 100% power. Allow to cool completely.

Step 2 - Shape the fondant into legs and a pointy sort of face. You can make these round or triangular-just don't make the head too big as it needs to stick onto the lamb without tipping it over. I just used the Chilean sheep toys that I had for guidance to make them into black faced sheep. Allow to dry, particularly the legs as they will need to firm up before balancing the egg on them.

Step 3 - Melt the white chocolate in a double boiler or in a microwave. Unwrap the chocolate eggs and place on an egg tray. Squash down each small white marshmallow individually and dip one end into the melted white chocolate. Adhere these mini marshmallows to the lamb doing one side at a time or they may slide off. Allow to set and repeat on all sides of the lamb (you don't have to do the bottom of the lamb). 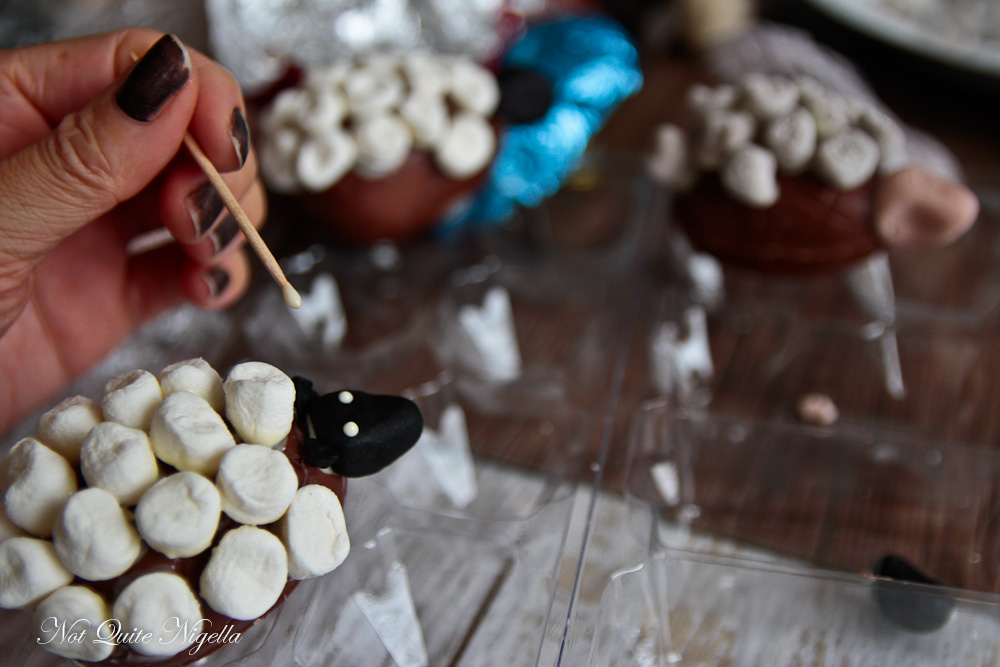 Step 4 - Draw little eyes on the face of the head and then affix this to the egg using white chocolate. Attach the legs in the same way balancing the lamb so that it can stand up on all four legs. 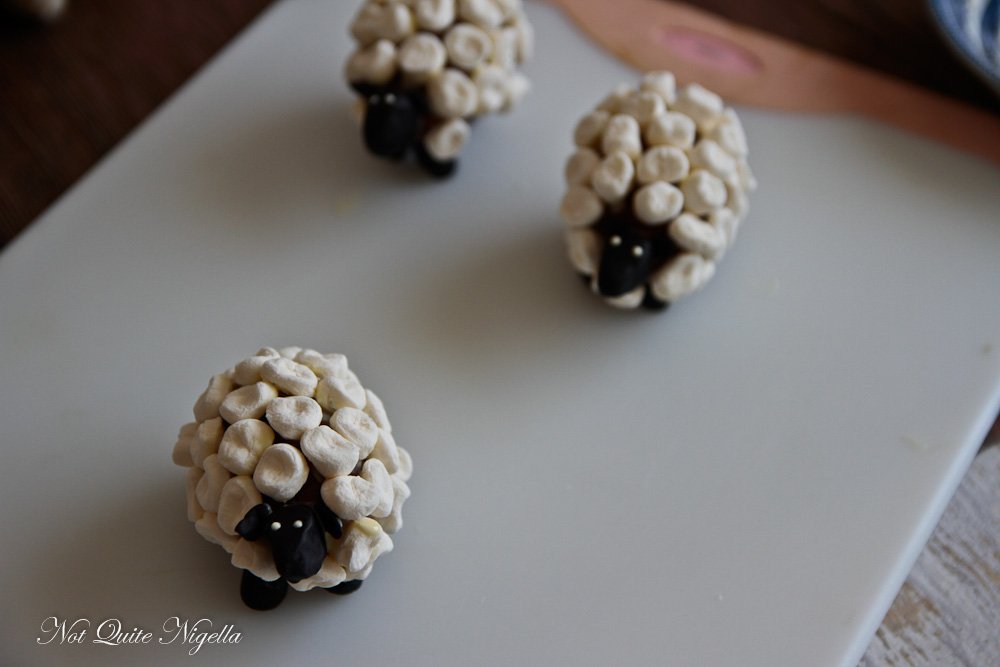