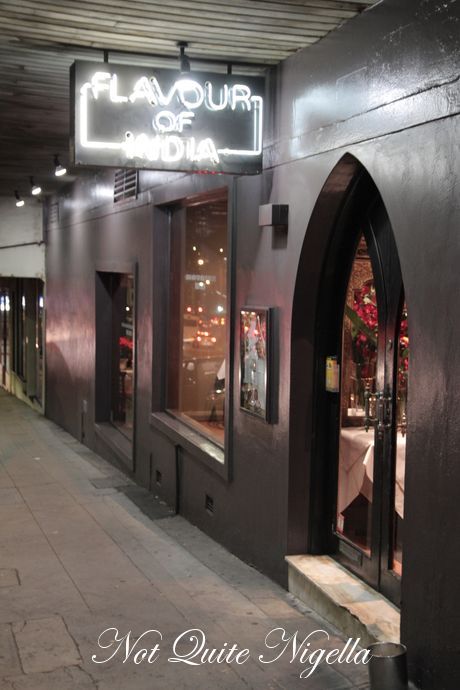 "Oh my god, that's Russell Crowe over there!!" one of Miss America's friends says. And sure enough the Gladiator is sitting there metres away from us.

"What do we do?" someone asks.

"Nothing! Just keep taking photos of the food and not him!" I answer his reputation preceding him.

We're dining at Flavour of India in Edgecliff, an establishment that has seen its share of celebrities. It occupies a block of road right next to one of Sydney's most expensive suburbs Darling Point and our waiter tells us that Nicole Kidman has dined "over there" and he points to a quiet corner and this is of course the infamous place where Michael Hutchence had his last meal.

But back to us, it's native New Zealander Miss America's twenty year anniversary dinner living in Australia. So having Russell, a native New Zealander who now lives in Australia whom we've just reclaimed along with the pavlova is kind of a lucky charm no? We're having the $49 banquet here tonight. Now I should add that the banquet is not really a banquet and it's not very good value from what we can tell. You basically have a mixed entree and choose from a list of eight curries for your main and you end off with a tea. Which would cost you about the same if you ordered them separately and then you would get more curries to choose from and there's no sense of "banquetness" i.e. an array of food unless there are a lot of you happy to share. 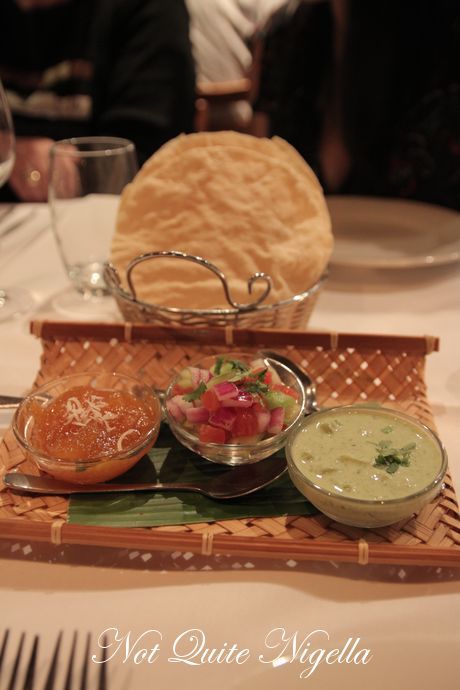 We start with some pappadums with mint yogurt, mango chutney and a tomato, onion and cucumber salad. 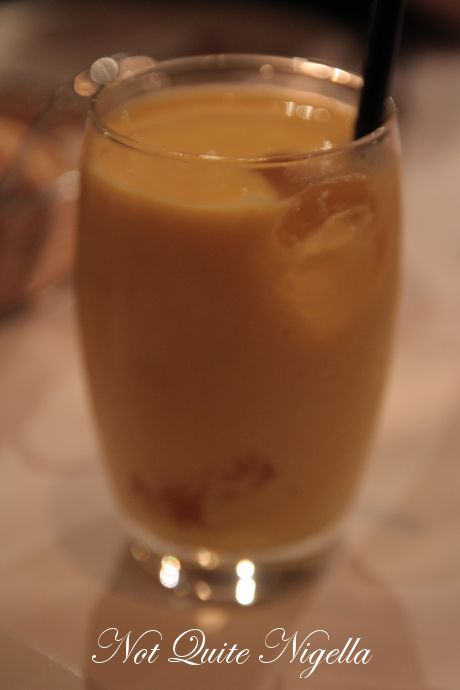 I try a bit of Mr NQN's mango lassi and it's not bad although it's not quite sweet enough with the tangy yogurt but that's just me perhaps. 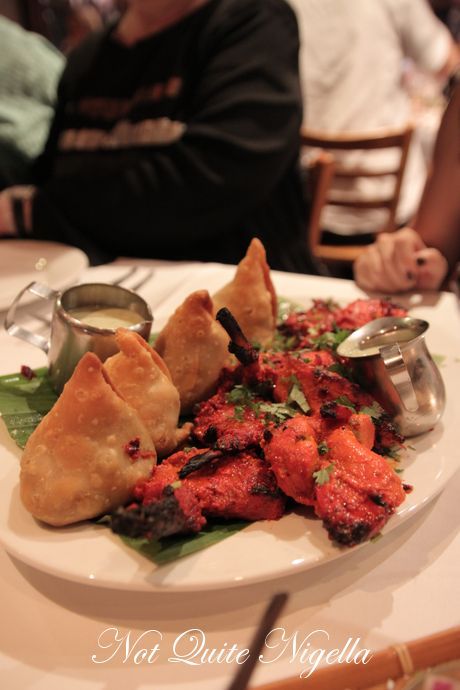 Our mixed entree arrives and it has a tandoori lamb cutlet which is a superb, tender soft cutlet of lamb generously coated in a tandoori yogurt sauce. There is also a piece of chicken tikka thigh which is juicy and moist and also coated with a tikka yogurt sauce. The samosa, something that can often be dry and stodgy has a lovely crispy shell and a delicious interior that avoids all stodge. 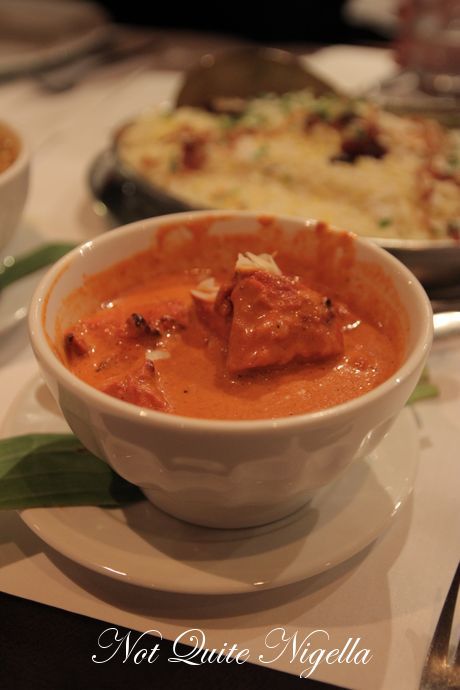 We basically chose one of each of the curries. The butter chicken, roasted in the tandoor oven and then cooked in a creamy butter masala sauce (and I've seen how much butter goes into butter chicken sauce and it's a lot!) is good although probably not my favourite butter chicken or curry of the night. 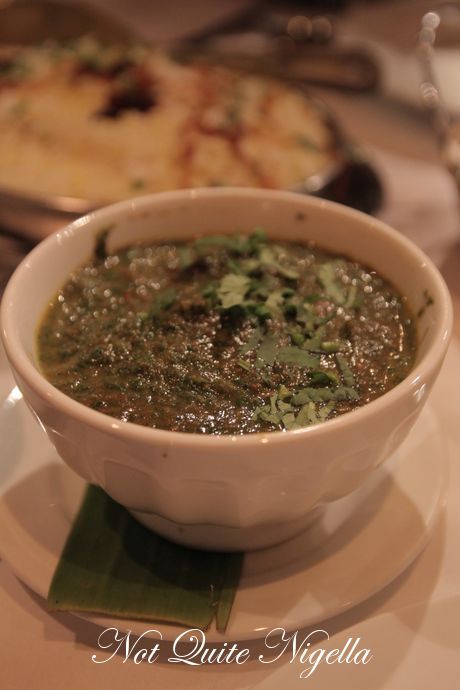 I love spinach dishes (palak paneer, the cheese and spinach curry is a favourite) and the lamb in this curry is delicious and the finely blended spinach gives the sauce an added creaminess and body as this curry doesn't contain cream. 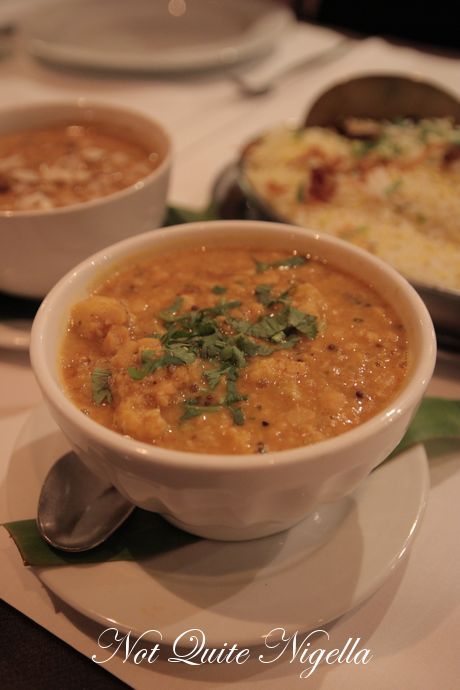 The cauliflower lentil curry, a nod to vegetables in this meat heavy dinner has red lentils and cauliflower florets and is rich with desiccated coconut to give it a thickness, turmeric to give it that shade of yellow and chilli to give it spice and parts of it pack a punch. 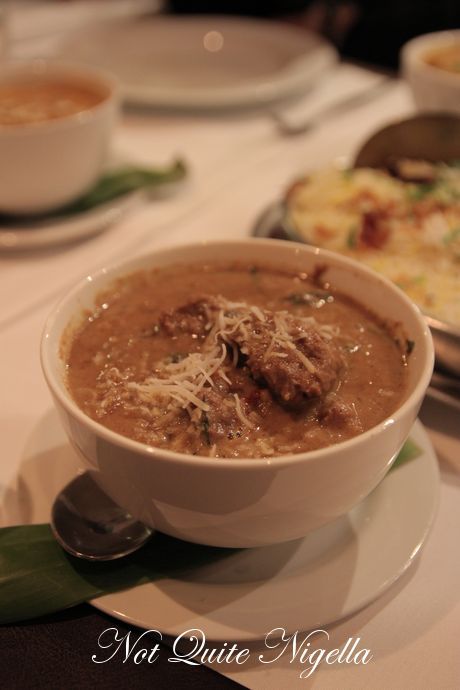 We've been warned about beef vindaloo in that is is said to be one of the hottest curries so we approach it with trepidation. It's not fiery hot at first but there's definitely heat and it's a heat that lingers on and on and on. The meat is beautifully soft too. 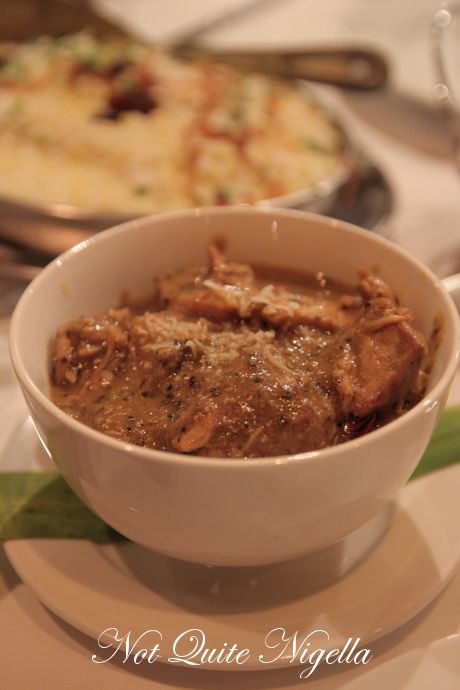 The pepper chicken is an unusual dish-we haven't seen it much on menus. It's spiced with mustard seeds, tomato and coconut with tender thigh fillets and is said to be a South Indian special that doesn't have cream in it (read: good for diet!). 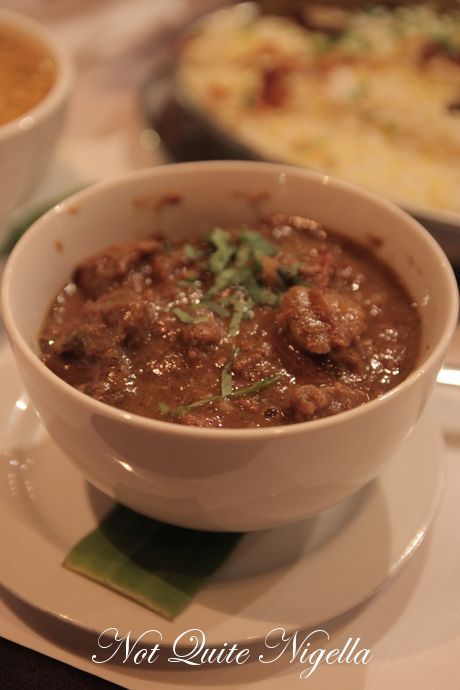 Goat curry is always a favourite of ours, especially when the goat is cooked until very soft (there's nothing worse than struggling with chewy, bony goat). Thankfully it of the soft cooked variety here. This is delicious and despite some at the table not liking the idea of goat they like the execution of it and it disappears quickly. 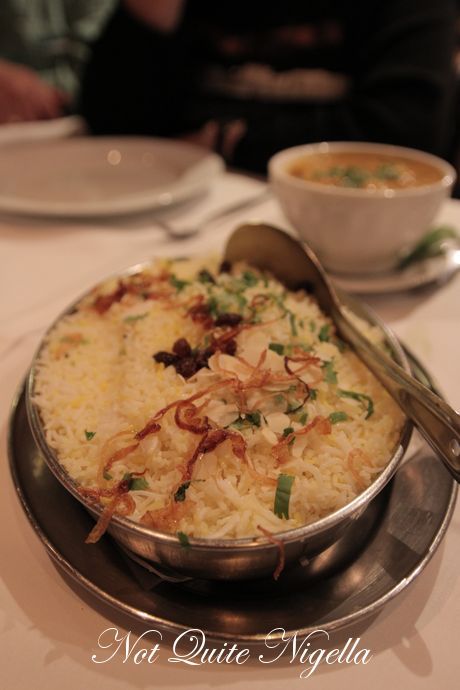 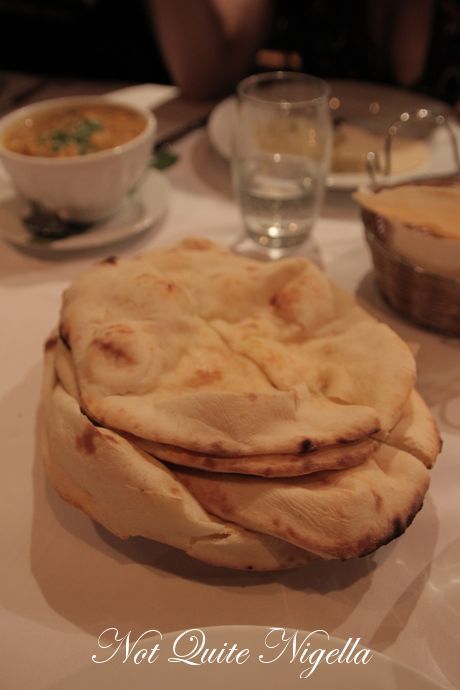 The naans (plain and garlic) are puffy and filling and always a nice accompaniment to soak up the curry sauces although I would have ordered the peshwari naan with sultanas and nuts if we weren't on the banquet menu which didn't offer it. 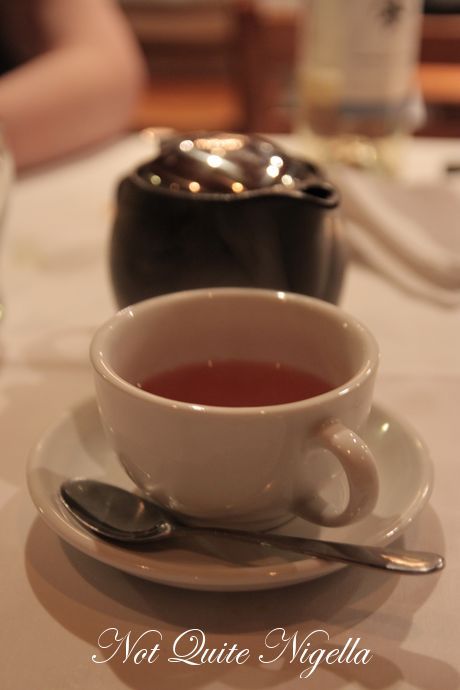 Our banquet finishes with a cup of tea but it's not offered when we finish, we have to ask for it. It's a cup of chai spiced tea which is gorgeously aromatic. We watch as Russell gets up to leave with his dining companions and when a curious diner asks the waiter what he ordered the waiter says that he had the goan prawns, fish tikka and a naan well done.

So tell me Dear Reader, would you approach someone famous in a restaurant?

Open for dinner 7 nights a week and lunch on Friday