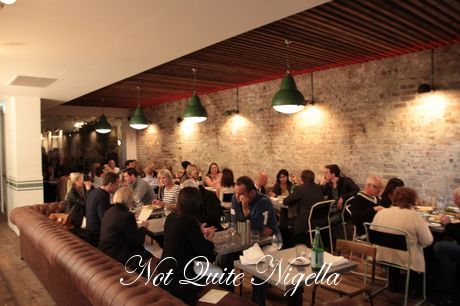 At the risk of telling you my exact age it has been decades since I was last checked in by a bouncer outside an establishment. Although I should add that I only went to establishments that had bouncers when I was a teenager and therefore it was more exciting to get in when you were let's say technically under the age limit. Ahem... so where was I? 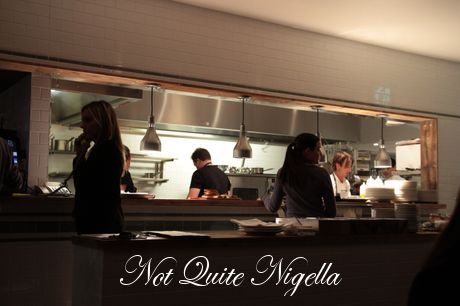 Oh yes in Double Bay,  a place otherwise known as Double Pay where the latest criminal installment involved the theft of expensive flowers from a restaurant by a Louis Vuitton bag carrying, BMW driving Darling Point resident. I was whispered the name "Mrs Sippy" by dining companion Beau mistaking it for a place called "Mississippi" which got me all excited because I thought that it served food from America's south. Not so said Beau but it had good food nevertheless and was one of his favouritest, newest places. And a bouncer whom I had mistaken for another guest (albeit a burly one-I am so out of touch with the clubbing scene) has just lead us the few metres to the restaurant area where we are shown to a table. There are no bookings at Mrs Sippy but we figure eating early-ish helps in this regard. And from the crowd gathered around it's already a local haunt for Eastern Suburbites. 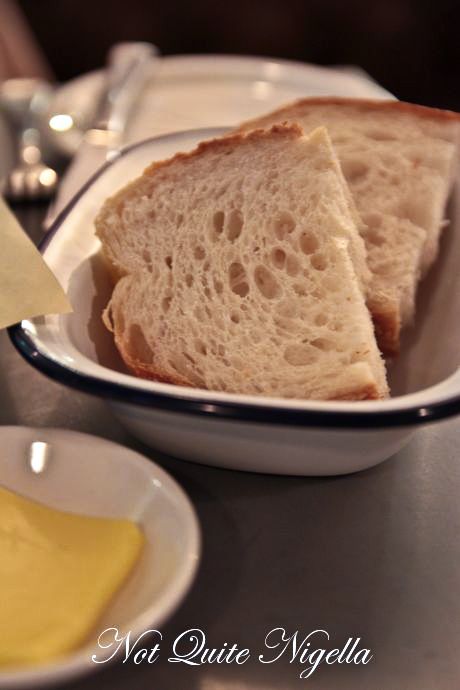 The decor is exposed brickwork, vintage looking Chesterfield banquettes on one side and nothing else really to note in terms of decor apart from a curious ceiling made up of slender slats of wood with one end looking like it has been dipped in red paint -and ghoul that I am I think of dripping blood (although non ghoul Mr NQN does too). 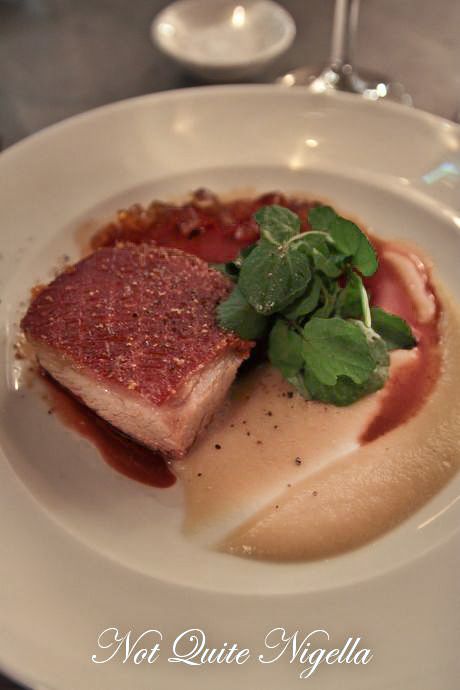 The menu has smaller bites all around the $20 mark such as salads and sandwiches (the tuna nicoise apprently flies out the door during lunch) and the mains never hit over $29 which is refreshingly at odds with Double Bay's other name of Double Pay. The crispy skin pork belly is perfectly cooked-the lid a satisfyingly crunchy shell atop a soft, melted gooey base. The spiced apple is a puree and the sweetened jam like mustard fruit the ideal accompaniments to the pork. 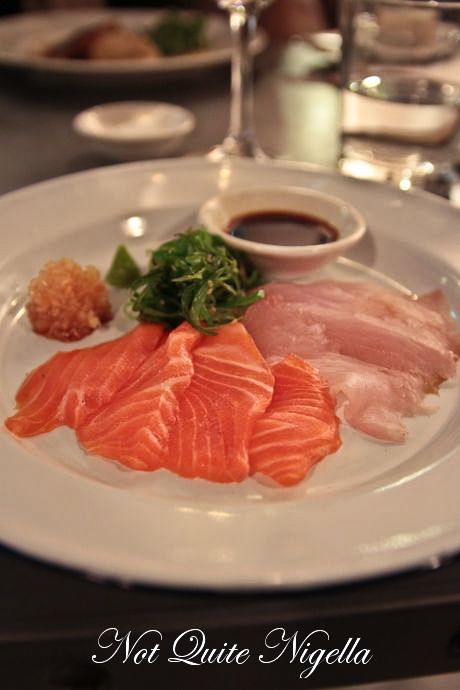 The sashimi comprises of four slices of salmon and four slices of kingfish. It comes with a fantastic finely diced ginger which gives it a lovely heat and warmth with a touch of cider vinegar. I actually prefer it to the pickled ginger that you get with sushi and sashimi as there is a real warmth to this. And Mr NQN also likes the wasabi given too. 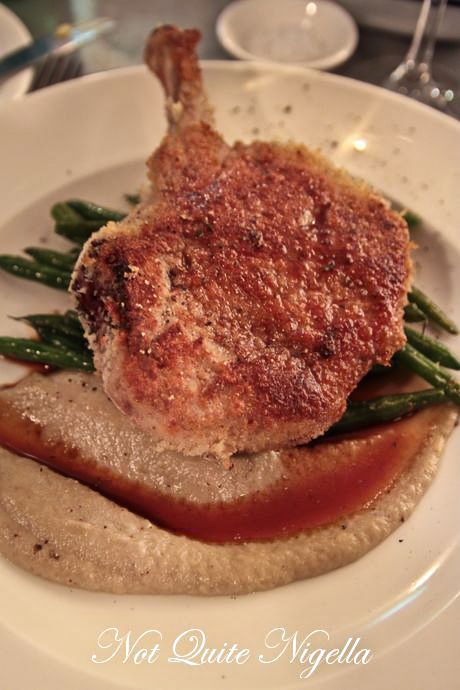 Out of the two mains I was more taken by the dinosaur sized crumbed veal cutlet. Crumbed foods are such a treat and this is coated in fine, crunchy breadcrumbs and then pan fried and served lovely and pink inside. The jerusalem artichoke puree is fine and silky and the green beans provide a soft bite back. 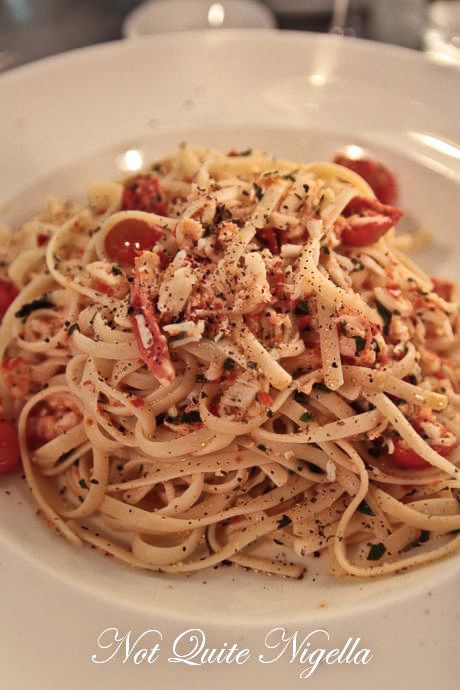 This was Mr NQN's favoured main as he liked the spiciness. To me I think it could have used a bit more garlic and less mint and I wasn't as taken with the crab meat in this. 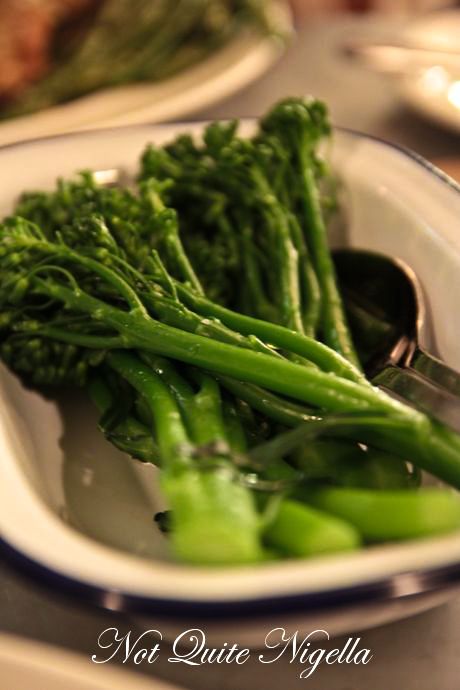 I suppose if you had ordered the veal cutlet you wouldn't need to order the broccolini but since we had the pasta we did. There were four heads of nicely cooked and seasoned broccolini served in an enamel plate and we eat everything on our plates. The bread too was served on an enamel plate and whilst this is very on trend, I don't know if the enamel plates really suit the decor or clientele. 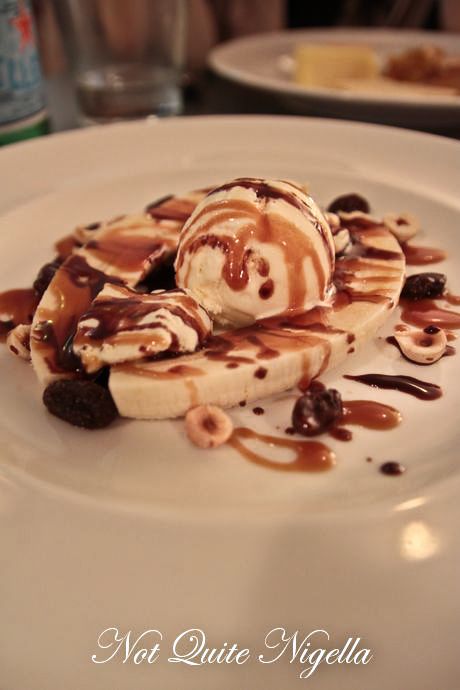 The dessert menu promises many teas including some detox varieties. We bypass those (detox after Christmas please! ;) ) and go straight for the sweet goodies. A bannoffee sundae is ordered because whenever we see anything bannoffee we have to order it. It comes out on a plate, not a banana split dish, and isn't particularly bannoffee like. There is caramel sauce and chocolate sauce and some hazelnuts and cream and it's not bad although a couple of thing could really make this a brilliant idea. And as you can imagine it gives me idea of making my own version! ;) 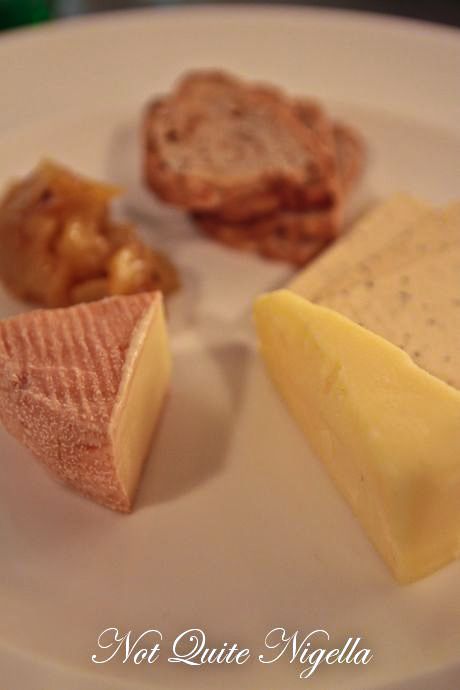 I don't recall ever seeing cheese on a menu for this reasonable a price and when the brulee or lemon meringue pie weren't really calling to us, we opted for the cheese. I love a good cheddar and this is thick and rich and this is a small farmhouse cheddar cheese from England so called because it is sold in a drum shaped box. The Petit Munster is named after the Benedictine monks (munster meaning monastery) and has a slight blue cheese hit to it. They are paired with lavosh crisps, slightly warmed slices of nut bread and poached pear dices which are rich in spices like star anise. All in all a surprisingly reasonable night out in an end of town where we didn't expect it.

So tell me Dear Reader, what do you do on a night out? Go to clubs, bars or restaurants or stay at home and have dinner parties?