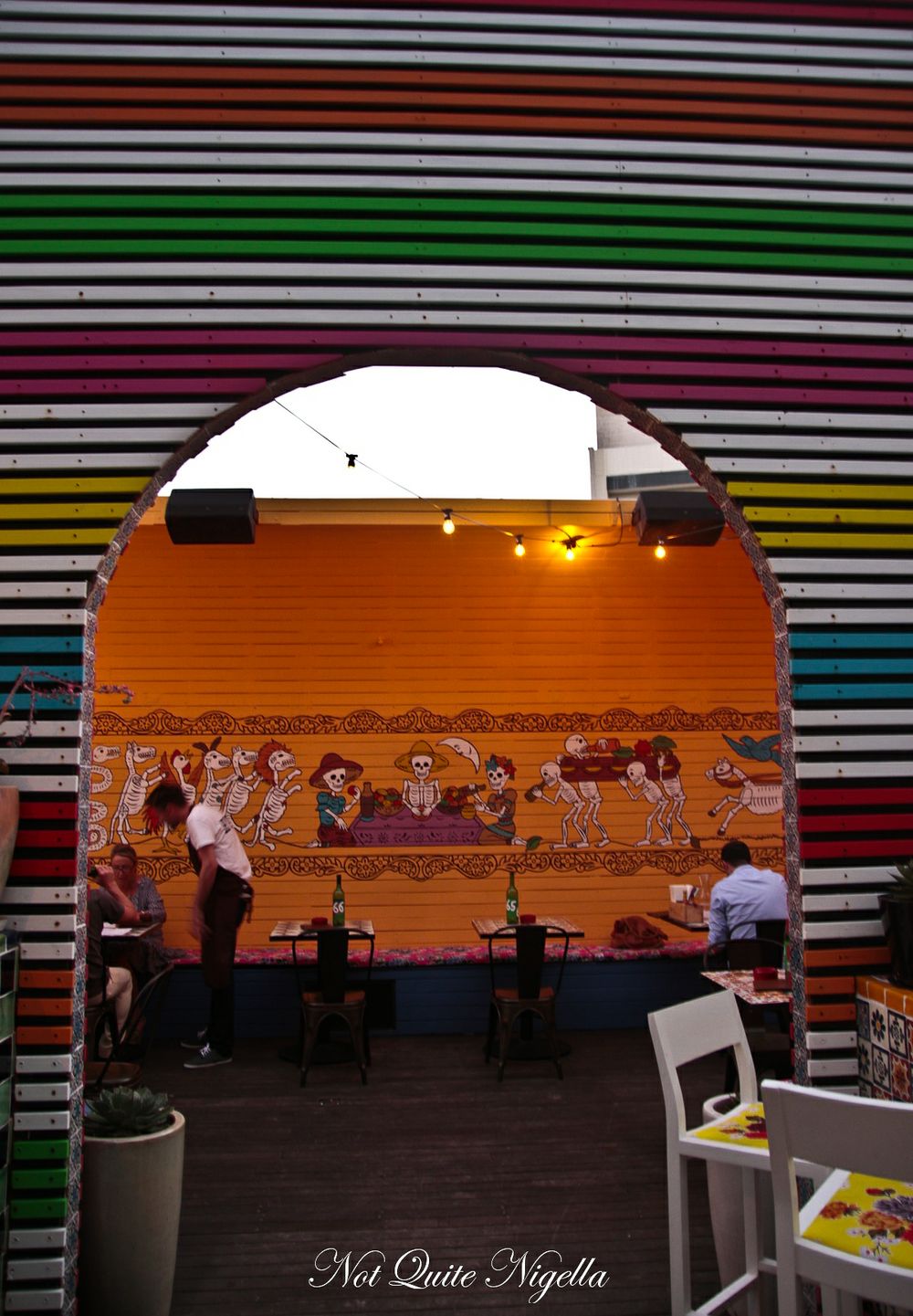 "Have you ever eaten a cricket?" I ask friends Louise and Viggo. 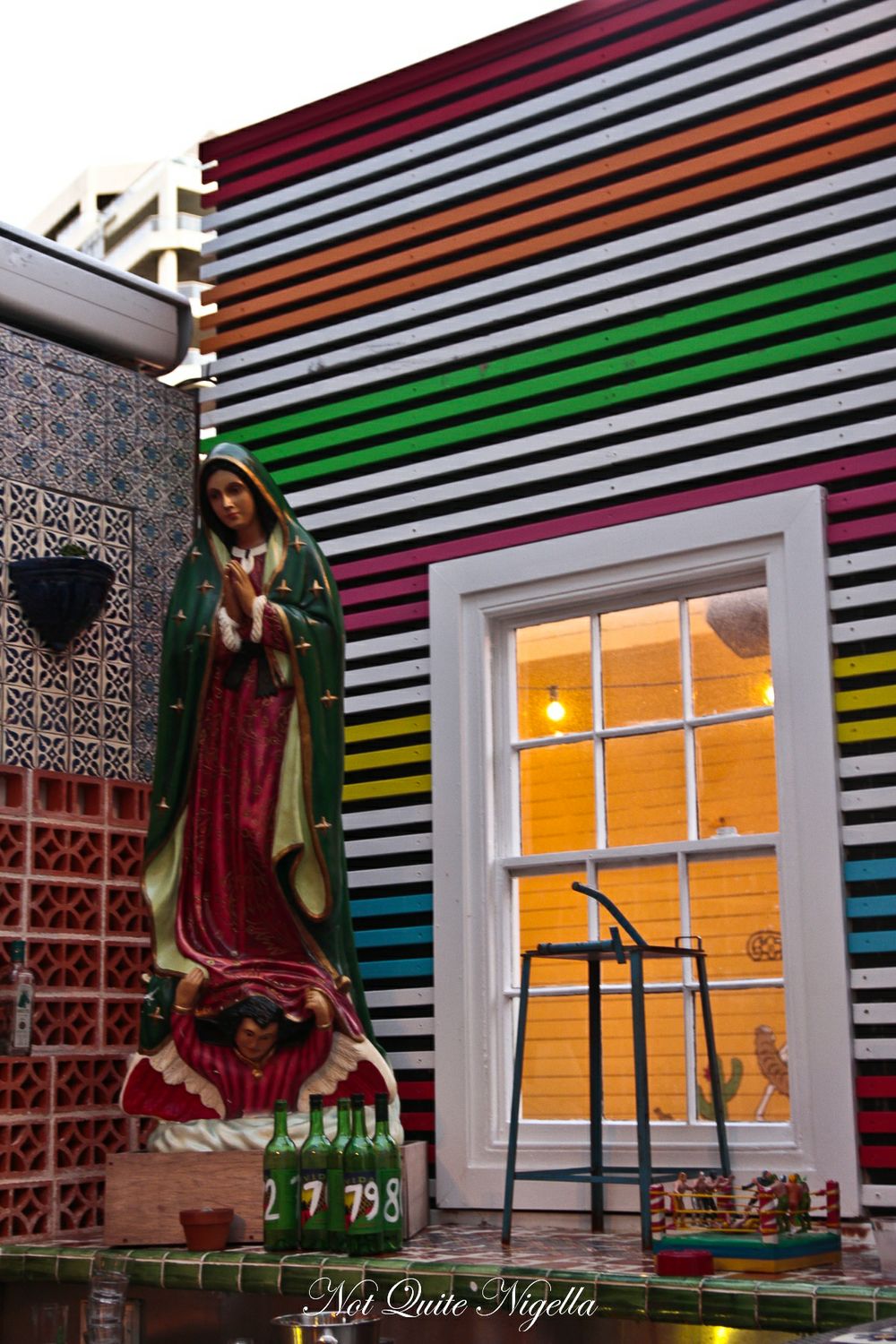 We're at El Topo (which means 'the mole'), home of the cricket appetiser. Actually no I'm being silly, there is just the one dish where Mexican crickets appear, the rest of the menu is Mexican with traditional and modern interpretations. Chef Matt Fitzgerald was formerly at Bentley Bar and the Oxo Tower in London. Traces of the Bentley Bar remain in some of the dishes. 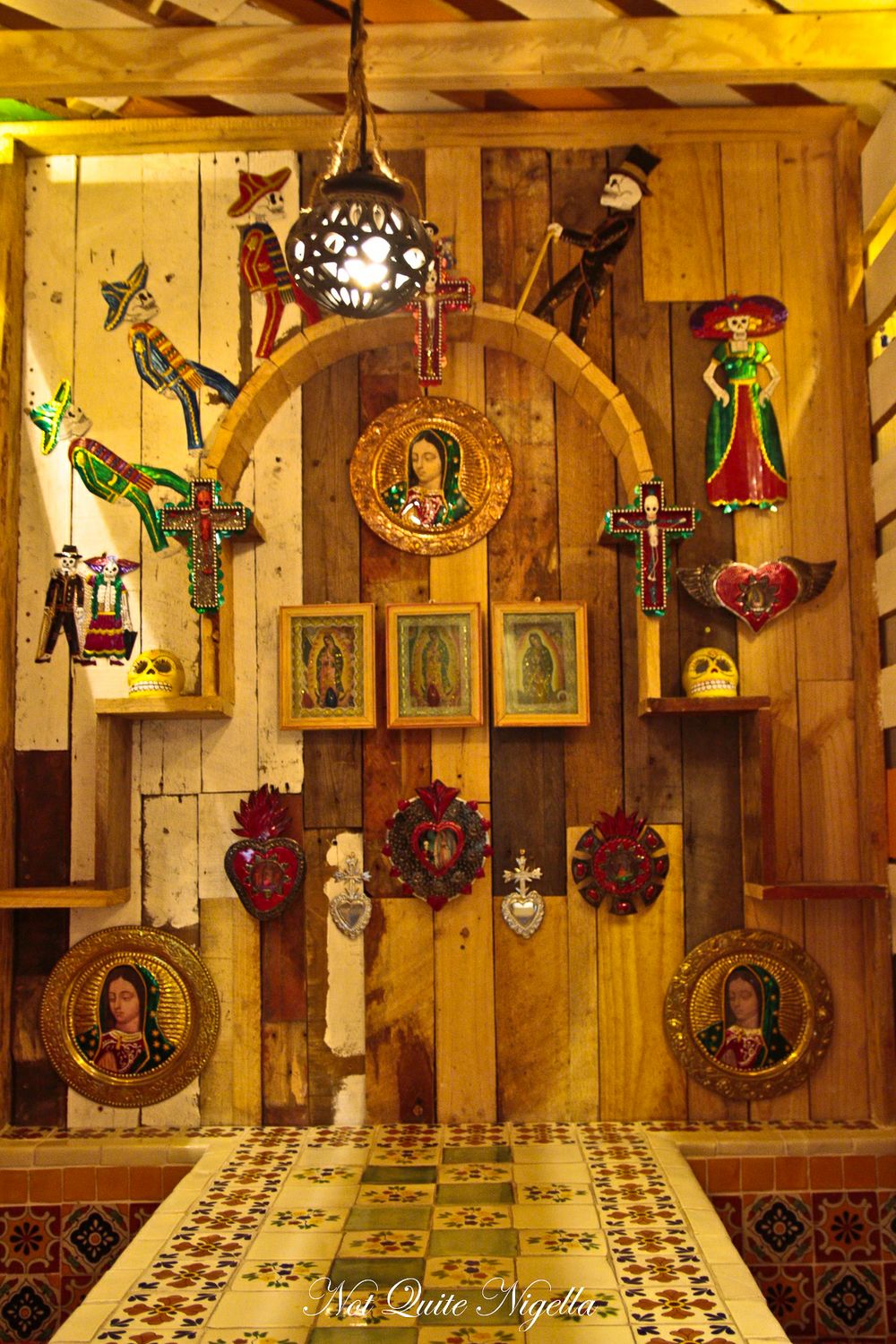 But first, there's the look of El Topo. Located on the third floor of the Eastern Hotel which is part of the Westfield Bondi Junction building, we take the long way around and you guessed it, getting slightly lost on the way from the carpark. What greets us is a wall of Mexican news wallpaper, candles and a wall full of Mexican Day of the Dead skulls. There are booths that are worth a perv and a stop inside but our waiter directs us outside to make the most of what seems like the last days of Sydney's warm weather. 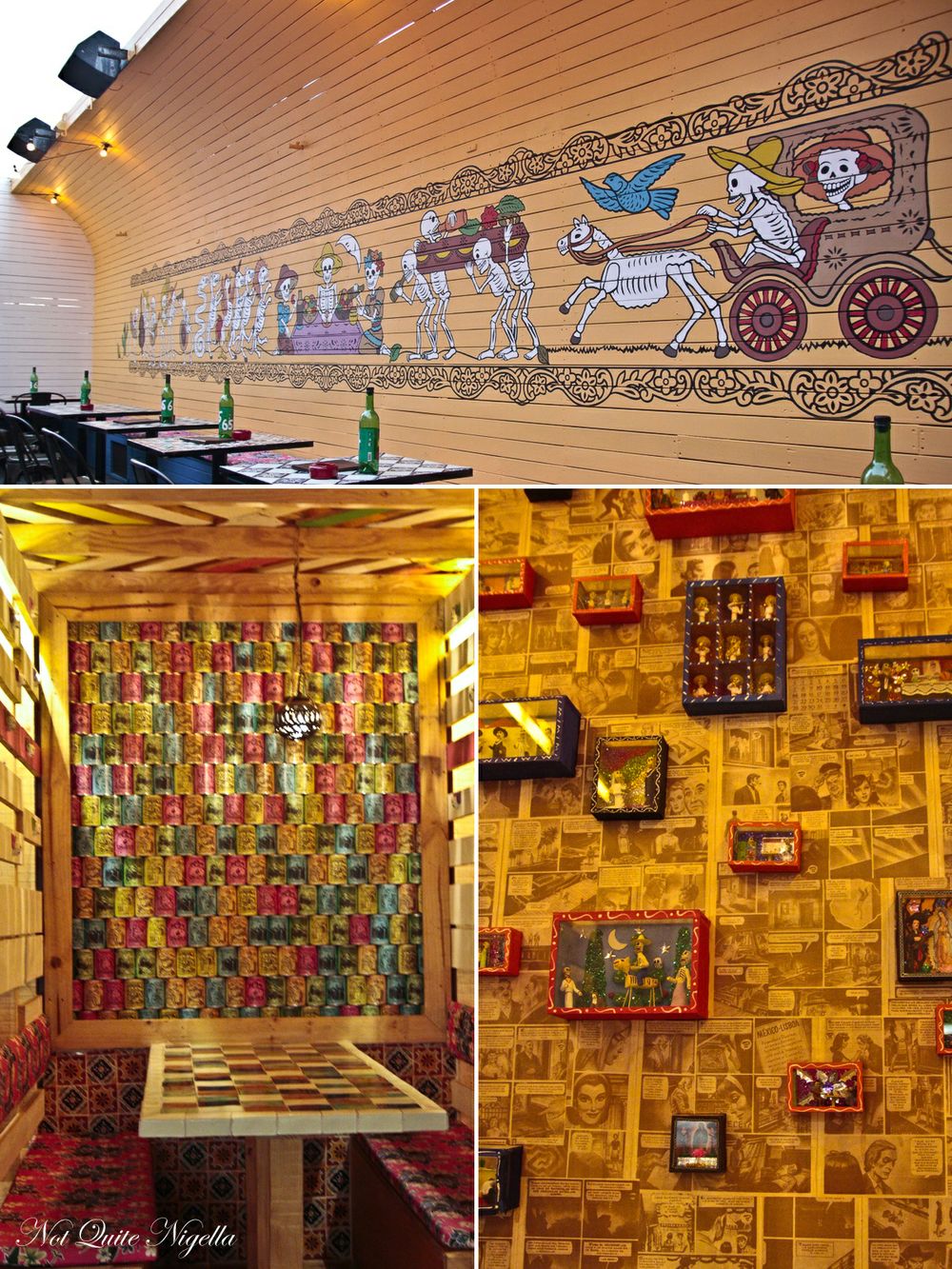 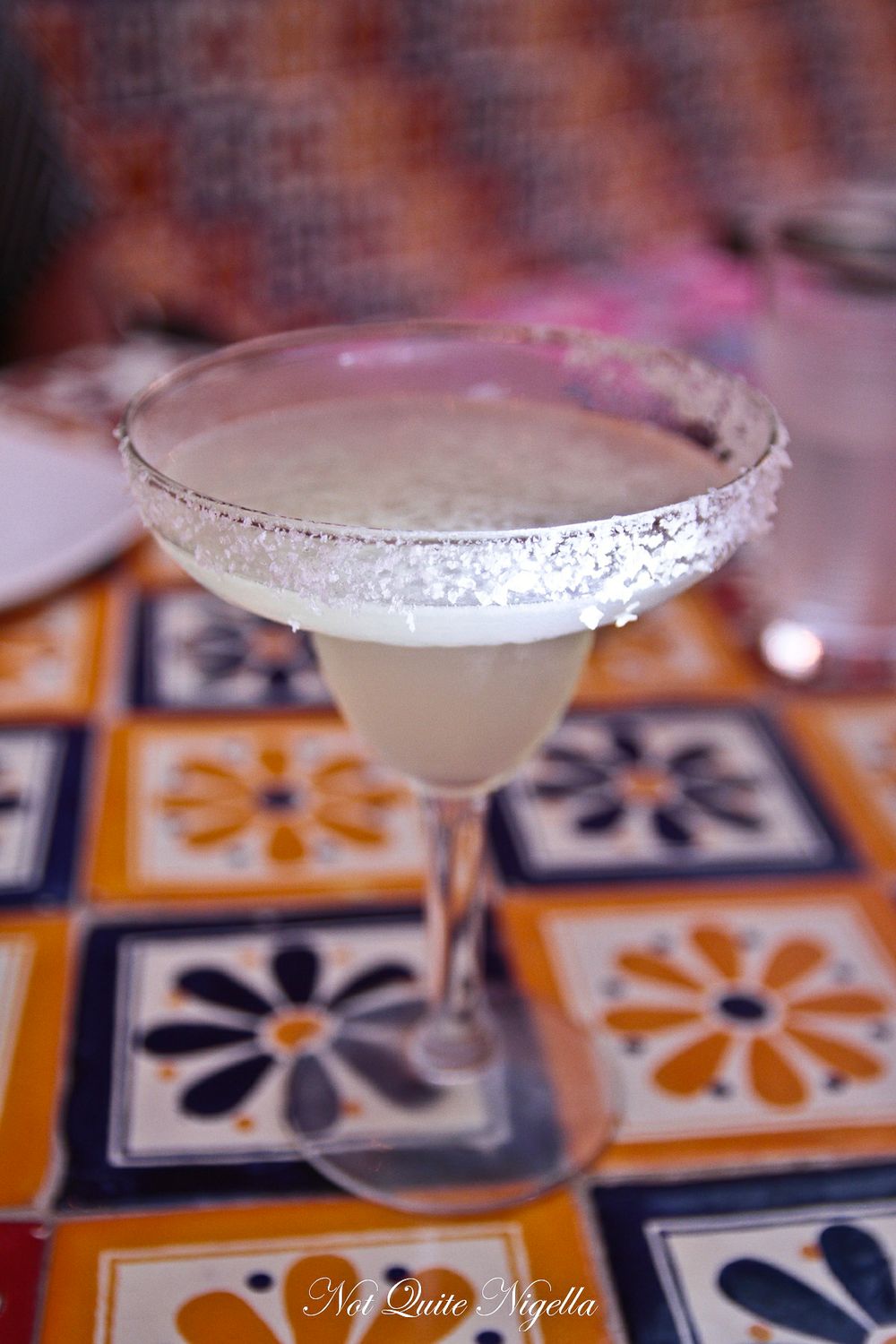 There are murals and the outside area is colourful with a private dining area with skeleton chairs. There are banquettes and large tables outside while the inside is booth seating. The menu is a printed paper menu and is said to be inspired by the food of Oaxaca region (pronounced Wahaca) in south western Mexico. 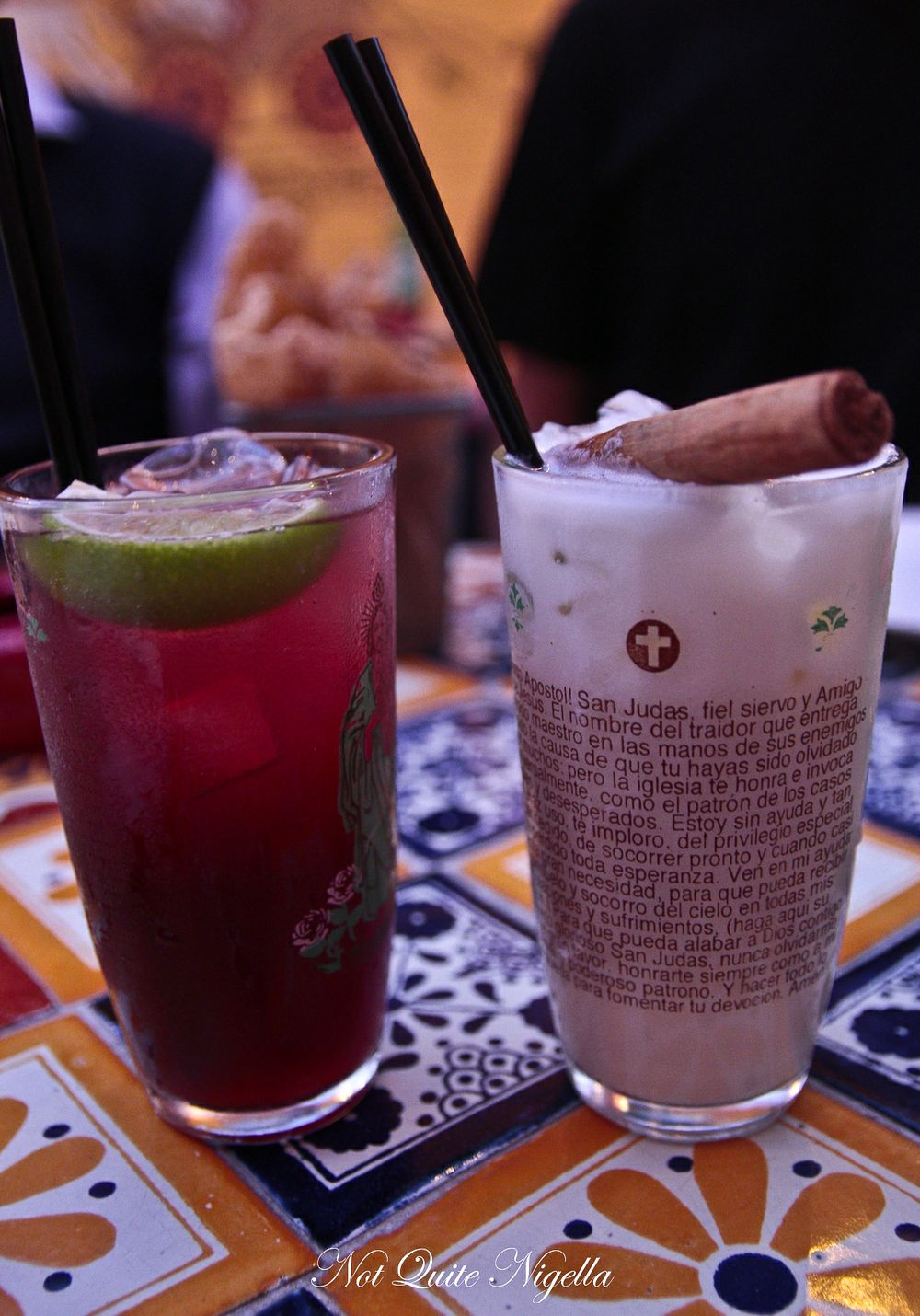 _Horchata and Hibiscus with agave syrup _

There were so _agua frescas _or non alcoholic drinks on the menu this evening (although both can have Tequila or Mezcal added to them). The hibiscus is similar to hibiscus tea sweetened with agave syrup while the horchata reminds us of a cinnamon rich egg nog. 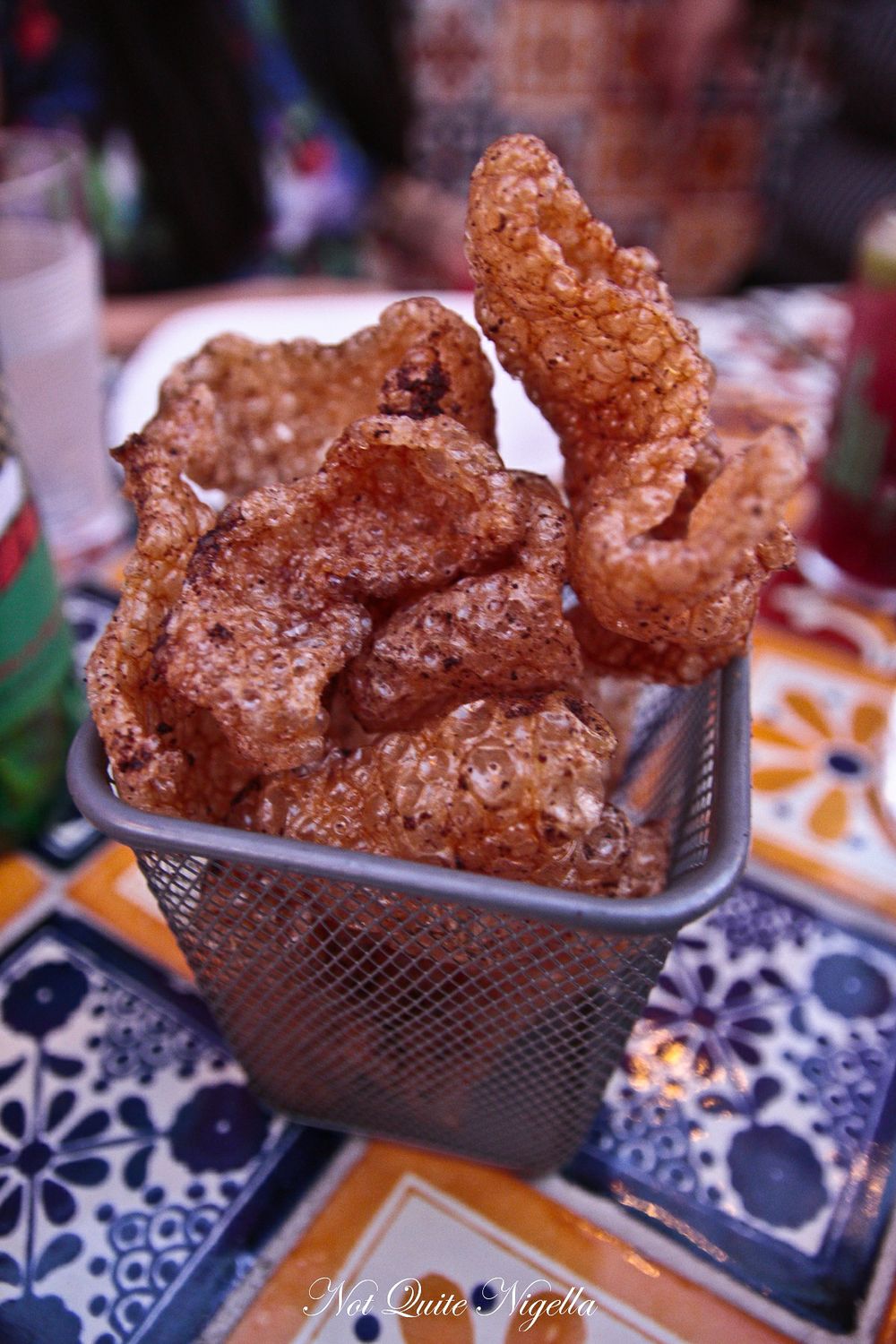 A metal basket of chicharrones of crispy, crunchy pork skin arrives and they're loud and crunchy curls of porky goodness. 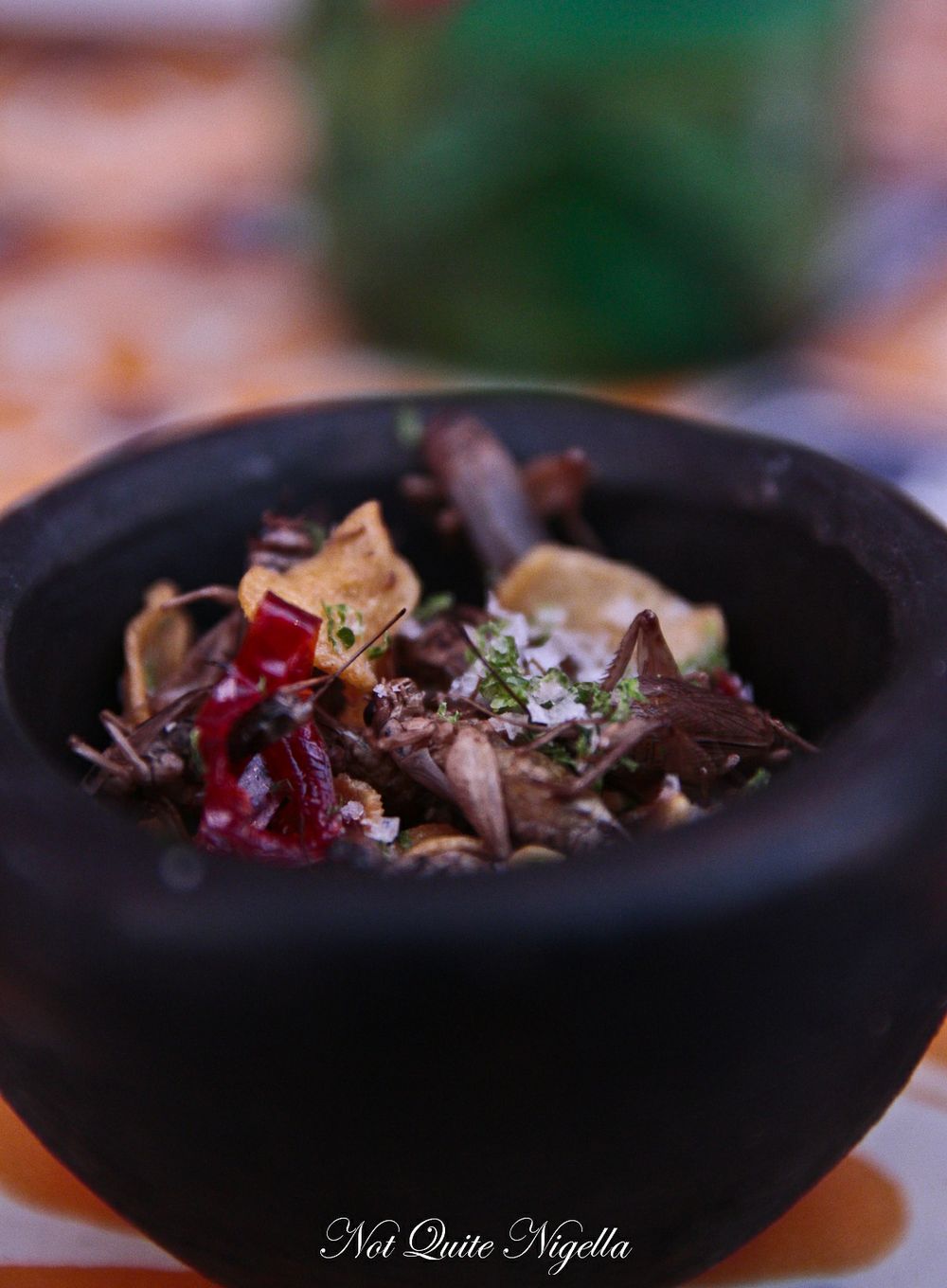 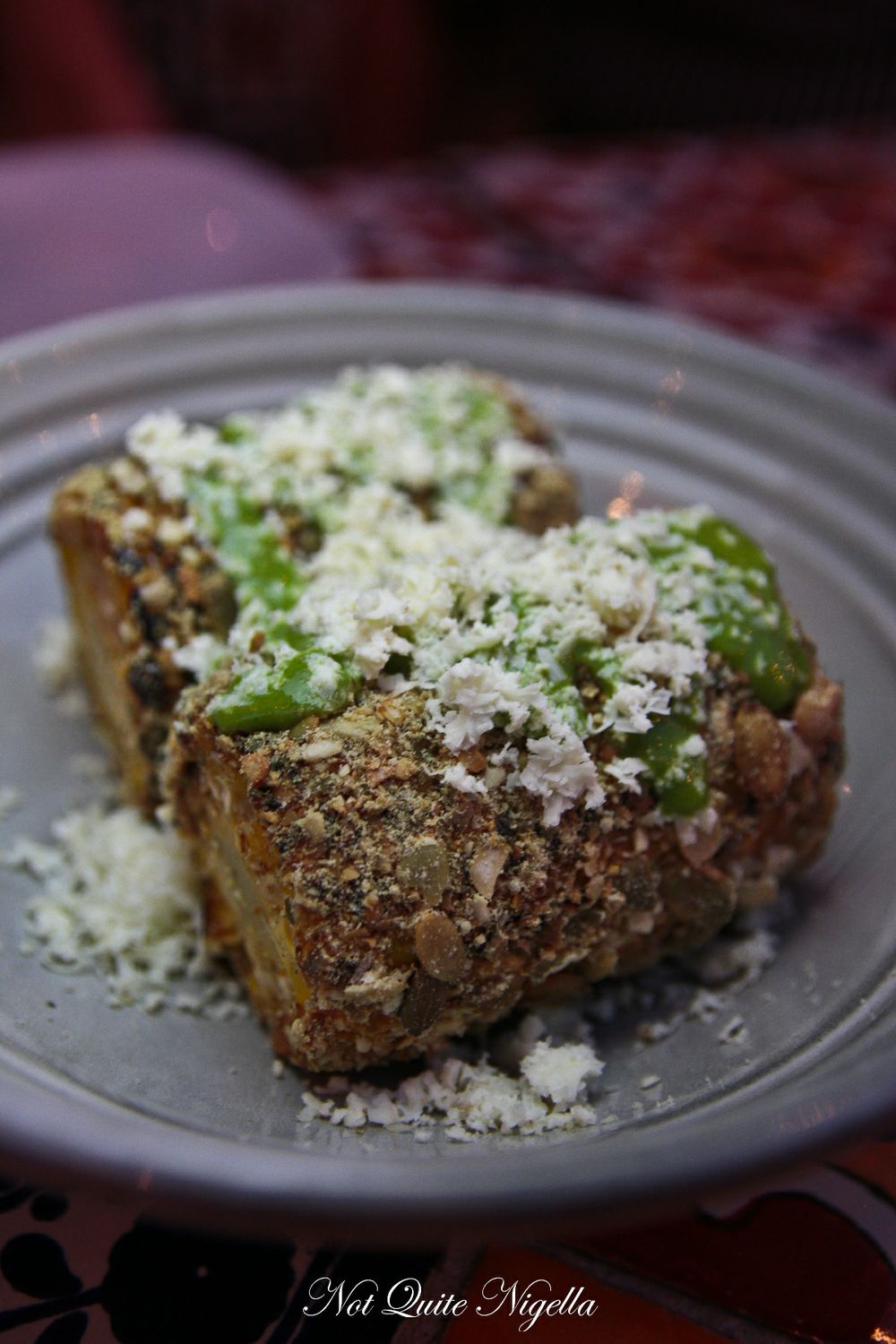 The corn is succulent and rolled in queso fresco cheese and a crunchy layer of chiltepil, a mixture of chipotle, pumpkin and sesame seeds. It's succulent and sweet with an aromatic char. 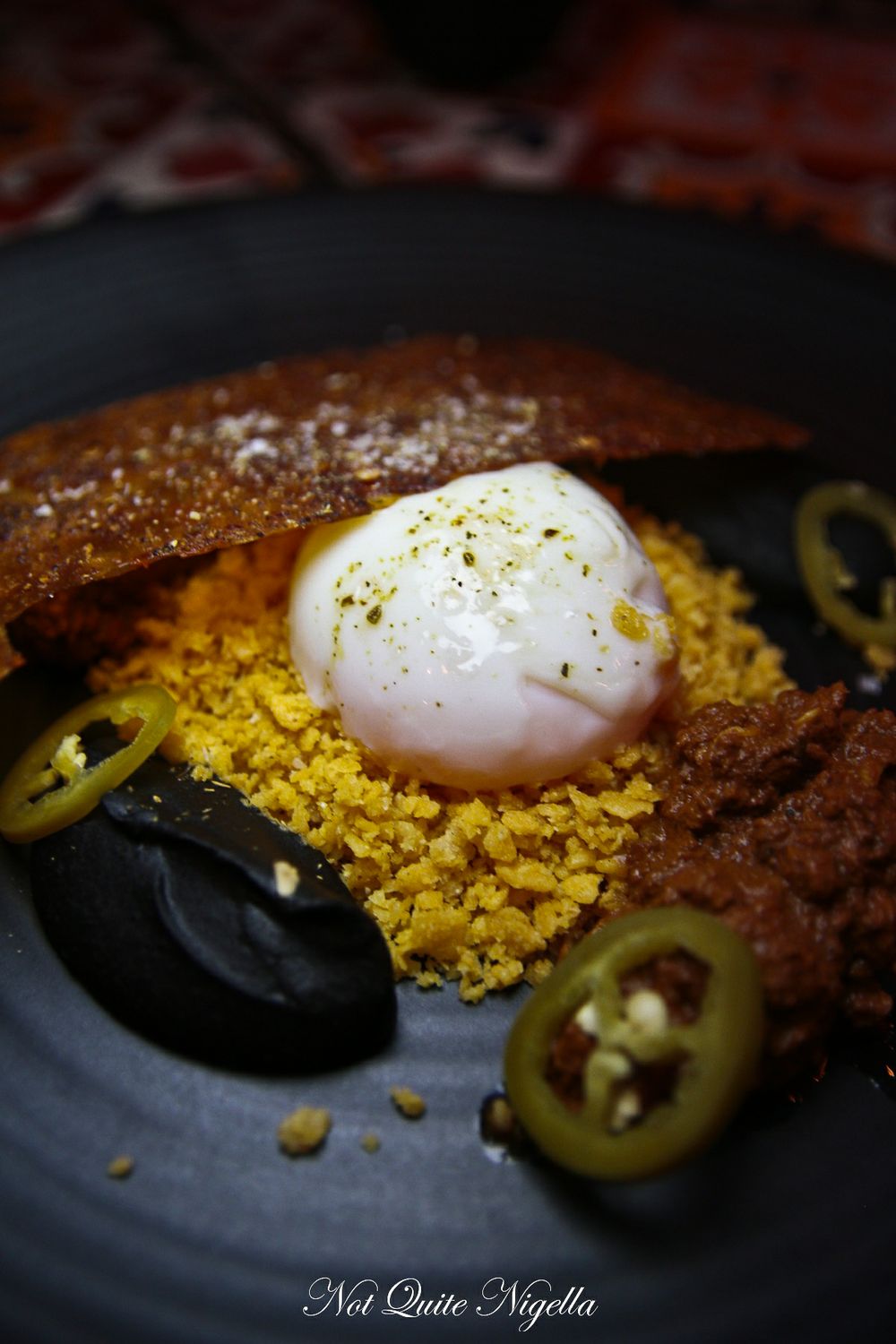 The chorizo was the first dish that hinted at the chef's previous life at Bentley Bar. The chorizo was served skinless as two neat portions at the ends of what tasted like crumbled up corn chips. On top was an oozy slow cooked egg and next to this were two quenelles of inky black smooth turtle bean puree. To finish it off was thin slices of Jalapeno and a thin sheet of crunchy potato. And I had to do a double check on the price of this because there's a lot of work in this dish at a very modest price. 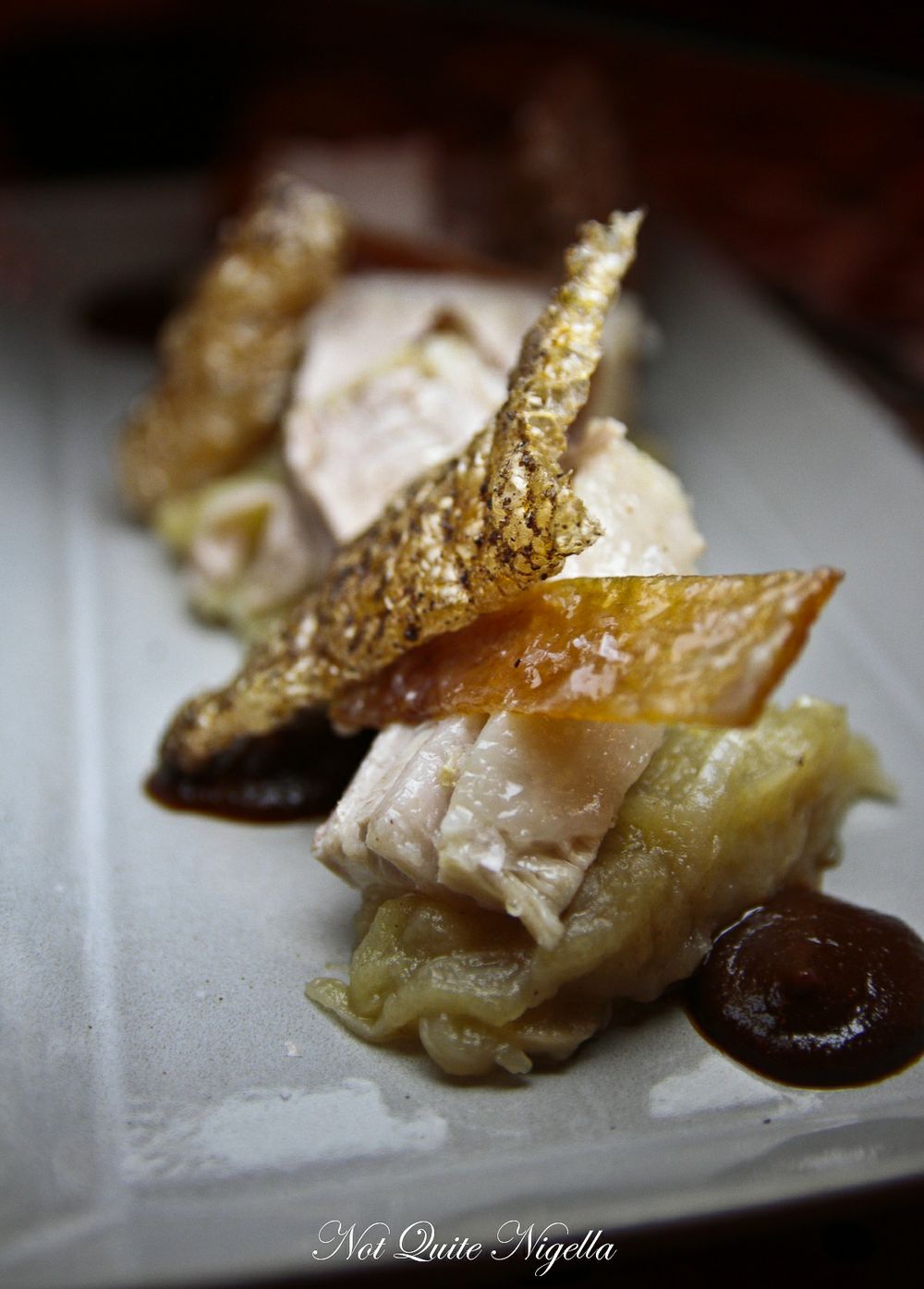 Oaxaca is said to be the home of the mole and there are seven types of mole in the region. The soft pork belly is paired with a mole manchamantel made with pineapple and chilli and a long list of ingredients. Indeed another mole on the menu has about 40 ingredients in it. The pork belly slices are incredibly soft and paired with apple chutney, chicarrones skin and dabs of dark mole manchamantel. 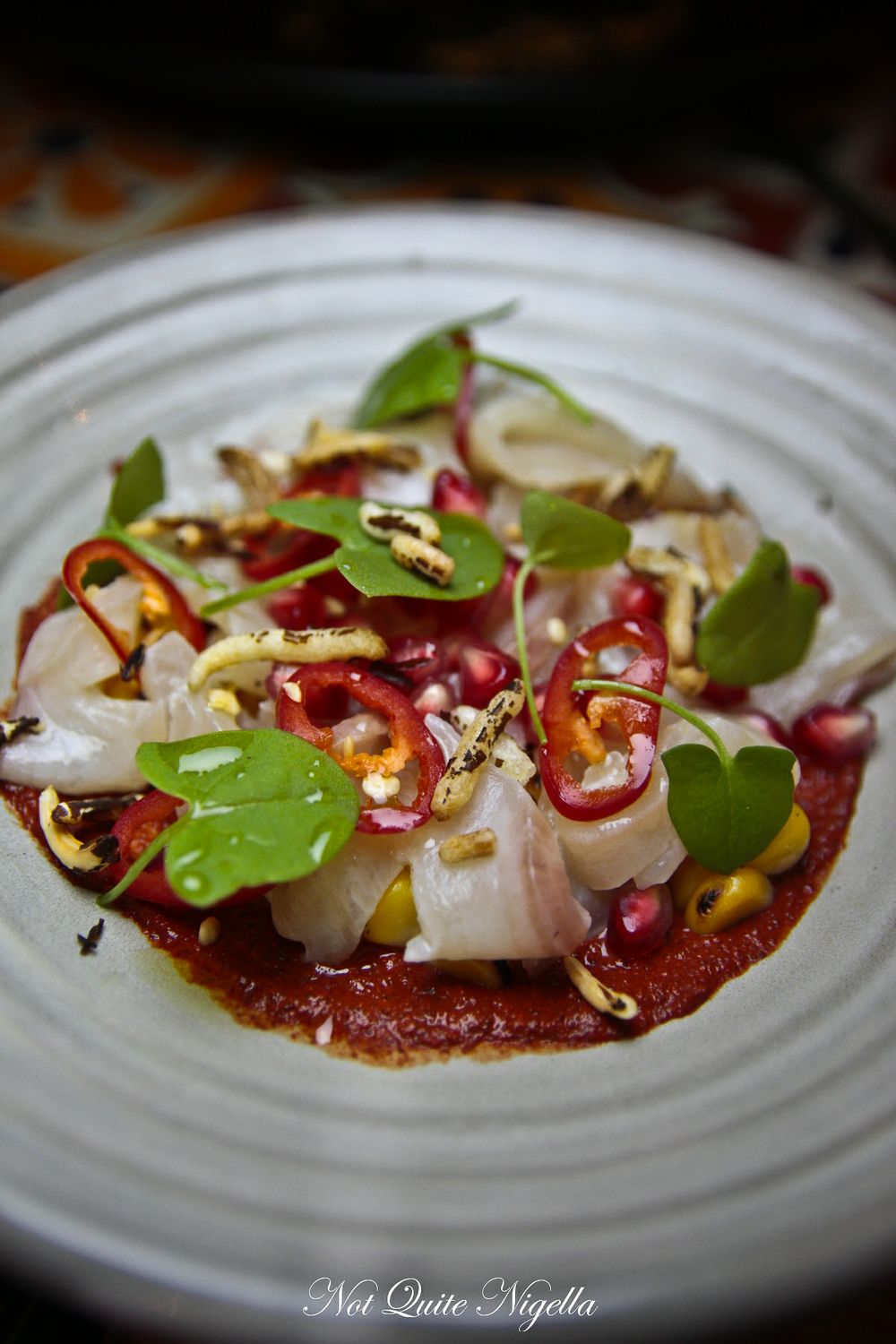 The ceviche is prettily plated in folds and swirls of Hiramasa kingfish on a brushing of achiote sauce with charred corn, puffed wild rice, pomegranate seeds and red Jalapeno chillies. It's fresh without being too sour or strong with lime and we particularly like the sauce although the slices of Jalapeno have us puffing. 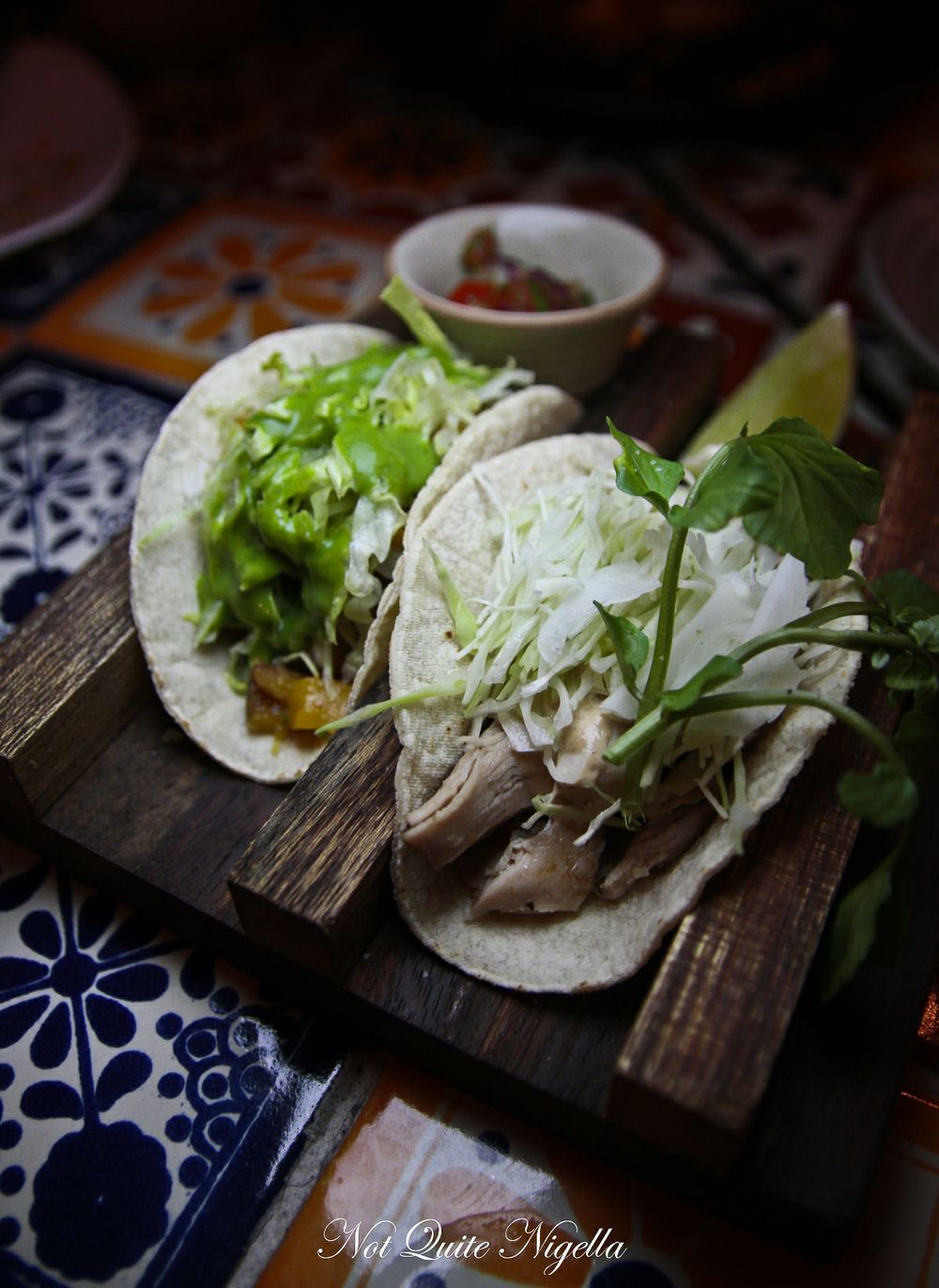 Mr NQN promises to make me one of these wooden taco stands (mind you, the bathroom cabinet door isn't still fixed!). We try the two soft flour tacos, the first one with soft chicken thigh, Mexican oregano, almond mayonnaise and watercress which goes with the lime wedge. The other taco is the Guallio chile pork, roast pineapple, lettuce and coriander with a little pot of salsa. Both tacos were among the favourite dishes of the night. 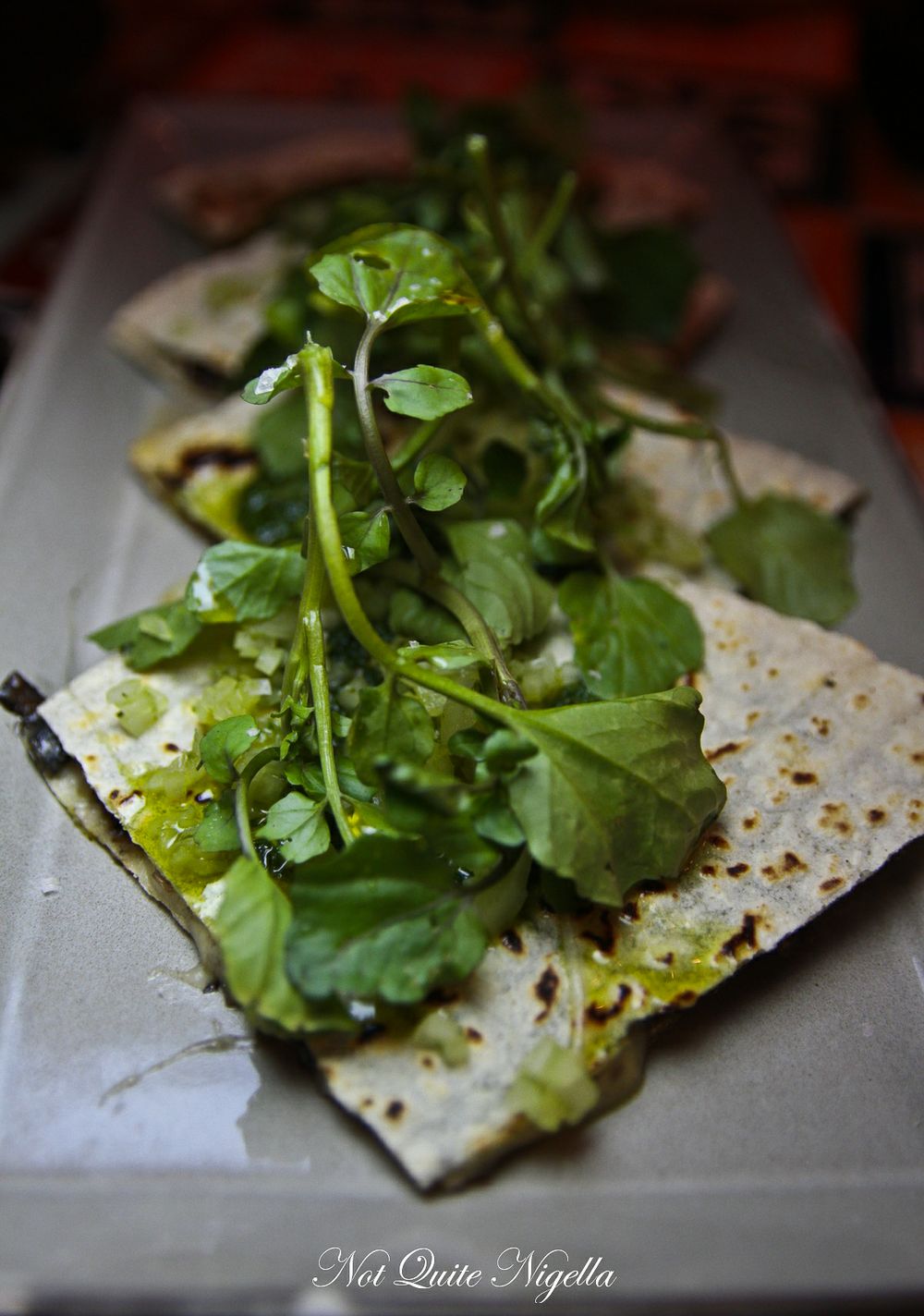 The Mexican truffles are actually usually a fungus that grows on corn cobs called huitlacoche. These are imported and fill the quesadillas along with mushrooms, salsa verde and queso Oaxaqueno. The overall balance of flavours in this quesadilla are excellent and I enjoy this (although for those expecting a traditional truffle flavour, it is not really the same although are earthy and delicious). 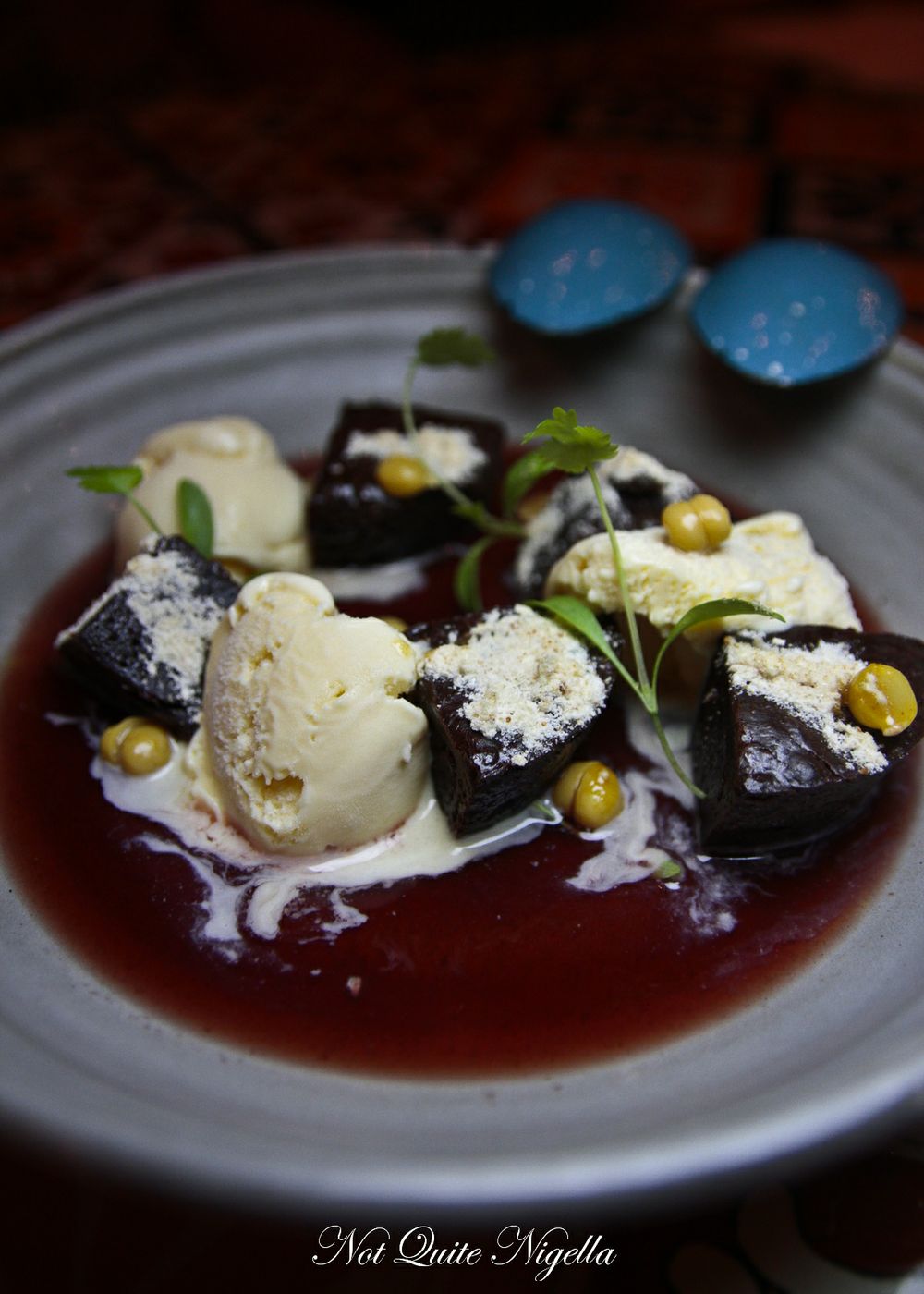 Alas, the weather was getting a bit too chilly for the Las Nieves or fruity paddlepops. Louise liked the sound of this Mexican chocolate and chipotle cake which came as five rich squares of chilli spiced chocolate cake. The chocolate in this was rich, dark and almost tangy while it was paired with a burnt milk ice cream and strawberry soup. The chickpea praline was really just halved chickpeas. 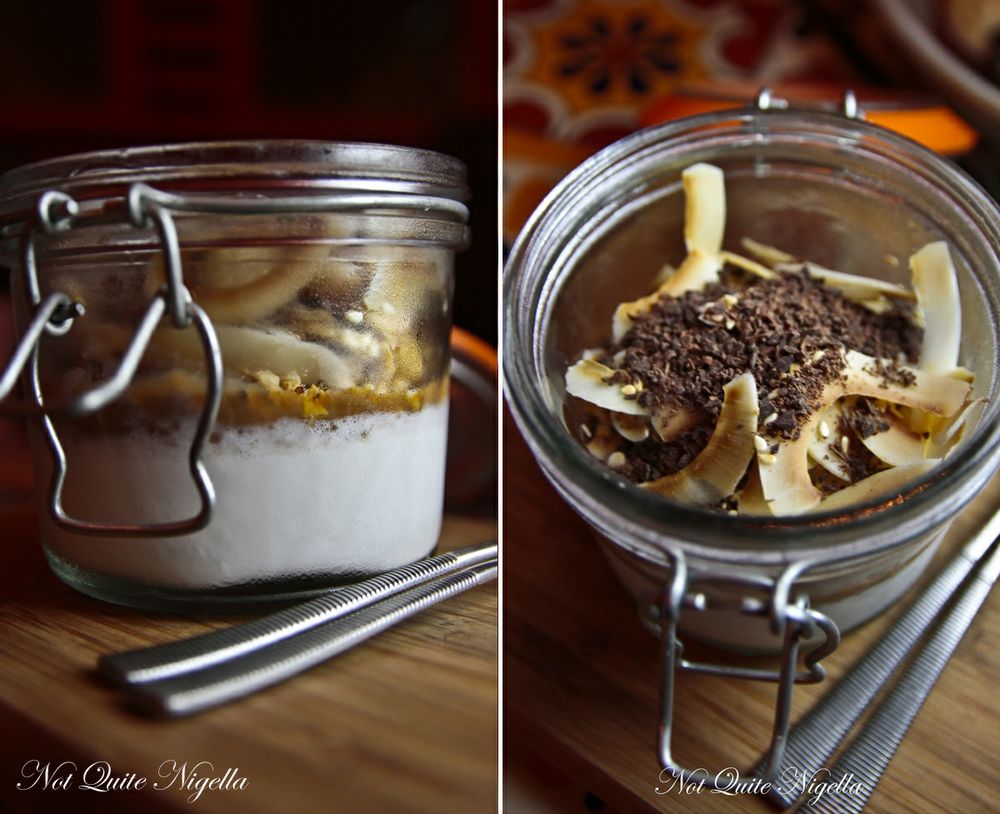 My favourite, because I adore coconut was the mason jar filled with a layer of coconut flan, all wobbly and creamy. In the centre was a rich single origin Mexican chocolate and hazelnut mousse. There was also goat's milk caramel, sesame seeds, chocolate shavings and toasted coconut on top giving this a delectable range of textures and flavours.

As we leave to go our separate ways I ask Louise what she thought of the crickets. She paused and thought about it for a second before replying "the crickets weren't too...crickety." 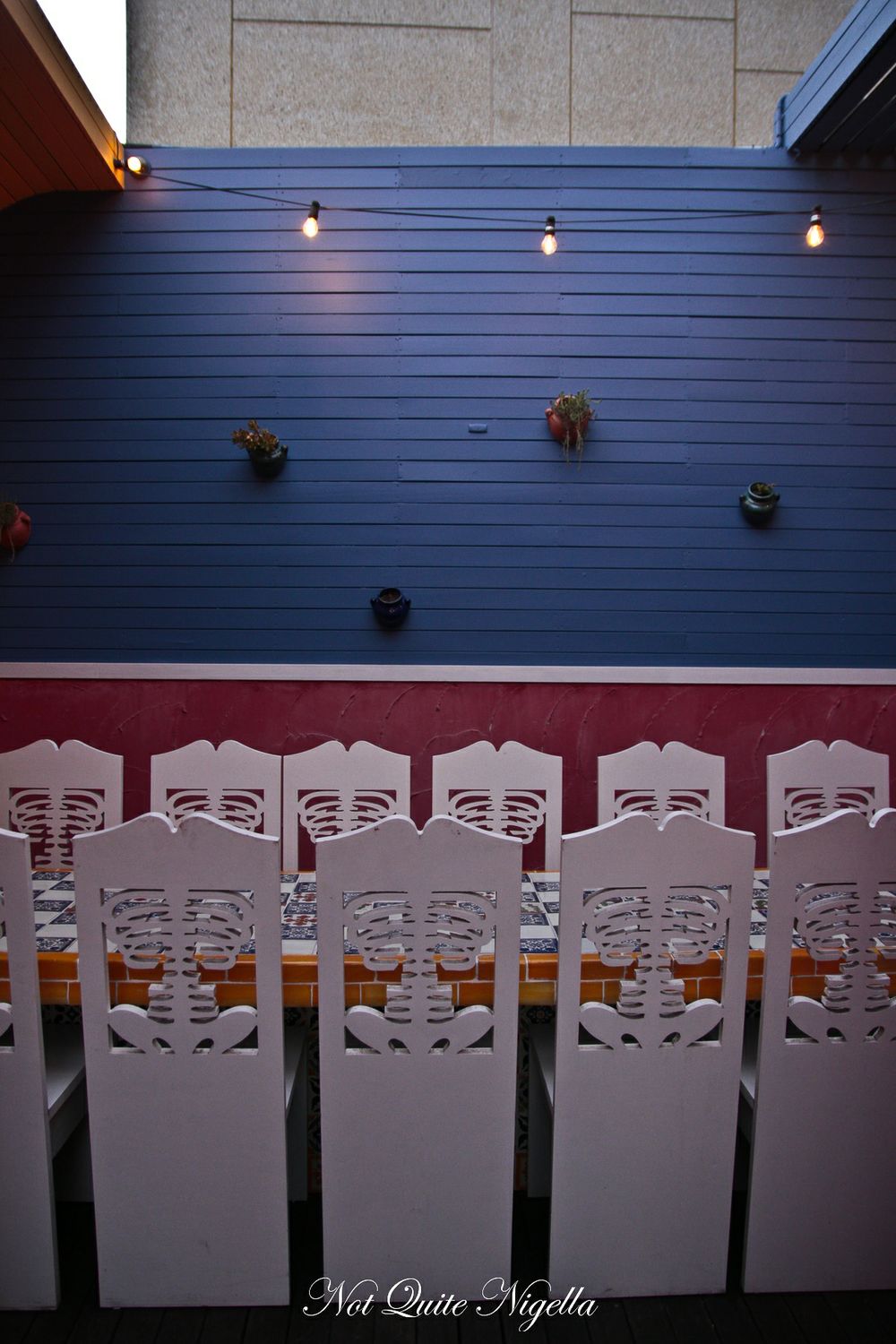 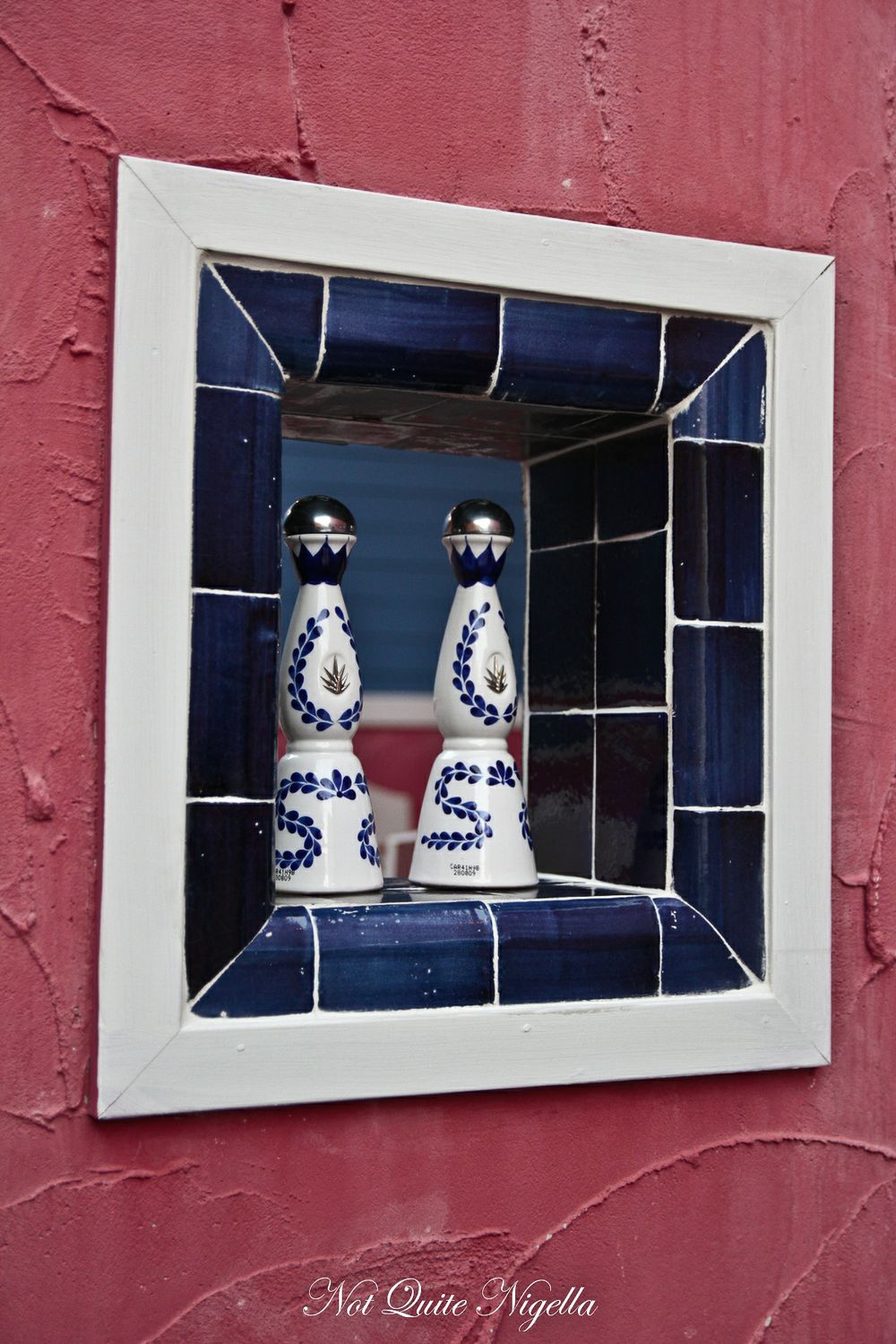