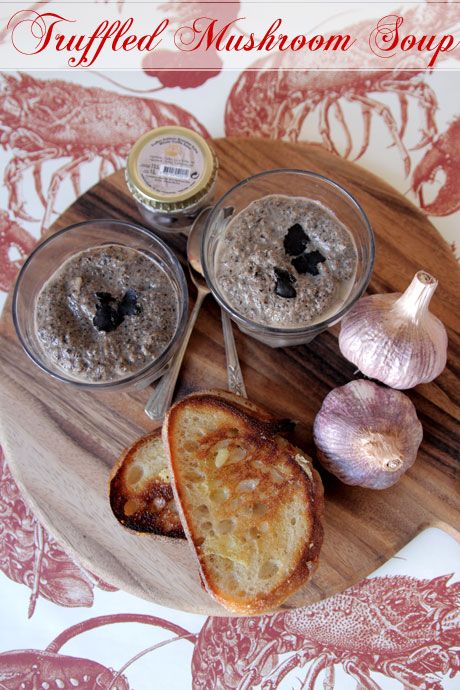 "I'm not a dog...I'm not a dog..." I affirm to myself aloud panting and checking the time on the iPad and phone every few seconds. Frustratingly, time refuses to budge.

"WHERE ARE THOSE ENDORPHINS?!!!" I yell out loud. The gardener across the way just beyond my balcony looks up and I wave. Yes I'm talking out loud to myself...

I'm on the treadmill, a  daily version of torture that I foist upon myself. It's a cruel necessity and one in which the rewards are great (the very occasional compliment happily grabbed and remembered all day long) but the punishment is even greater. You see I'm not one of those people that loves to run about. I'll quite happily lie in bed and conduct all my business from bed getting up only to eat (I have a strong aversion to bed crumbage) and then crawl back into bed.

This is me on a treadmill 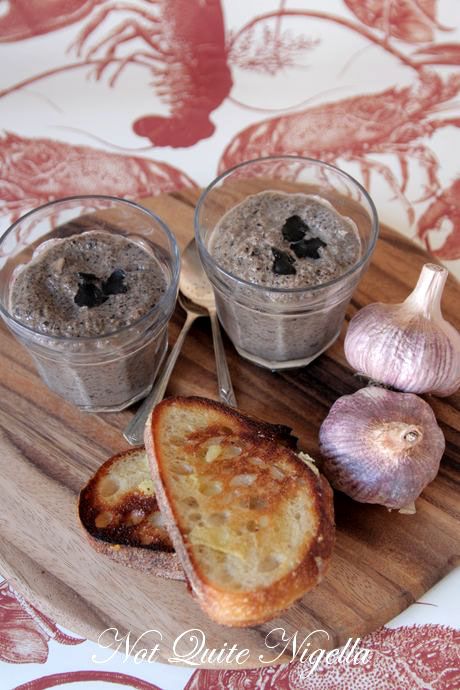 This life of eating needs to be balanced with some sort of sensible eating. Vegetables have fortunately always been my friend and I adore salads but come this colder weather, I fling away salads like grenades. I want soup. I want cheese toasties. And I want to be able to eat them while still fitting into my jeans. So my frenemy the treadmill is switched on every day.

I first tried this mushroom soup when I visited Ballandean Estate Winery near Brisbane. As Bobbi-Lee the chef's wife placed it on the table in front of me she said "This is the best mushroom soup you'll ever have". She wasn't wrong. It was marvellous. Rich and mushroomy it was also creamy with the distinct aroma of truffles. Requests were made for the recipe which the chef Matt furnished to us by email once we were back at home and when the weather turned chilly this was put on the agenda. I know, it's not really photogenic but I dare you to try some and not ask for the recipe. 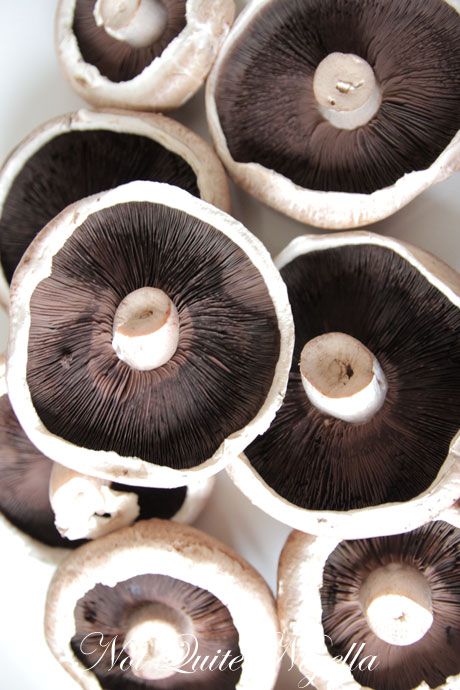 Because the original recipe called for 600ml of cream I baulked slightly given my new fitness regimen. I substituted it with some Philadephia cream for cooking that I was sent which has a lower amount of fat and calories and claims to not split when cooked. I had some truffles as well as some truffle salt although truffle tapenade can be purchased from Tetsuya's range and I should think that in a pinch truffle oil could also be used. There are a lot of mushrooms with 1.5 kilos of portobellos but this makes a lot of soup. You could of course easily halve it and there would be enough for a bowlful for four people. But do make this because it is utterly wonderful and I feel very lucky to have been given the recipe for this to pass onto others. 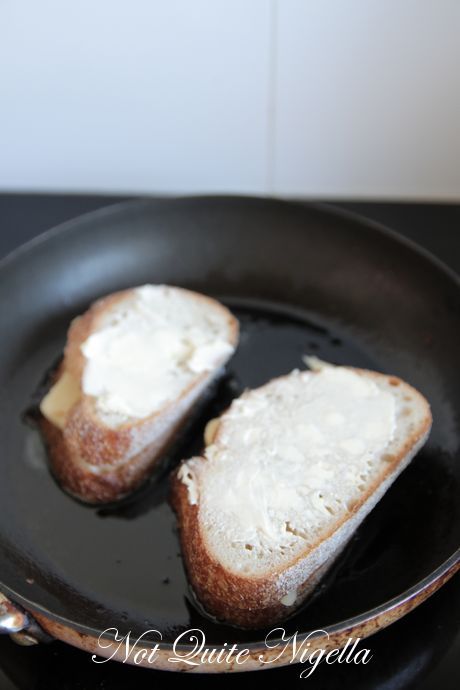 The cheese toasties, well are just the toastie I always make with the onset of curly cold tendrils of chilly weather. I pan fry them  instead of toasting them in the toaster and they are buttered on the outside rather than the inside. I have done this with all sorts of bread and cheese-it works with virtually any kind of both although my favourite is a nice sourdough, medium sliced as shown, with a lovely melty cheese-even a tasty block will do. The butter of course is non negotiable and I did barter the use of the cream for cooking for the use of the butter.

So tell me Dear Reader, do you enjoy exercise? And if so, any tips on making it more fun? 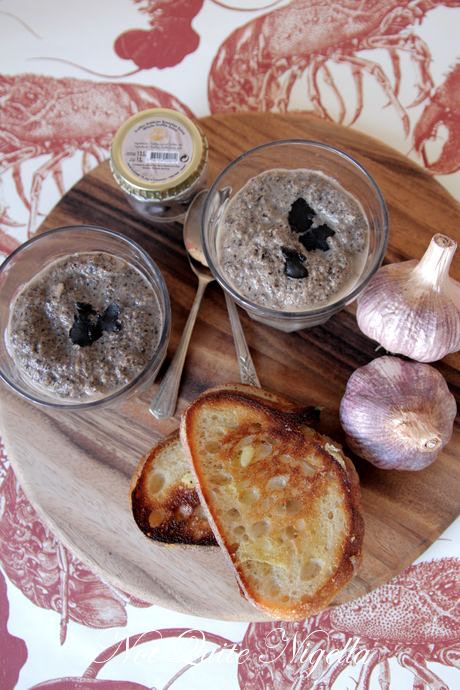 Step 1 - Dice onion and garlic and sweat in a large pot on low heat until softened and golden brown. 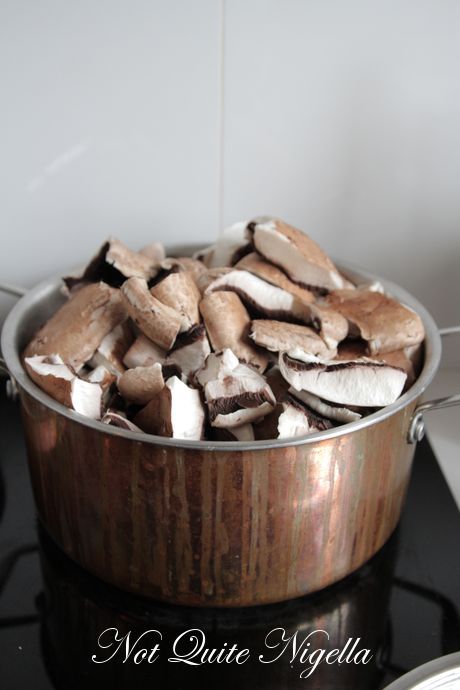 My pot runneth over...

Step 2 - Add broken mushroom pieces (I just broke them by hand over the pot). Cook on medium heat until moisture in released. 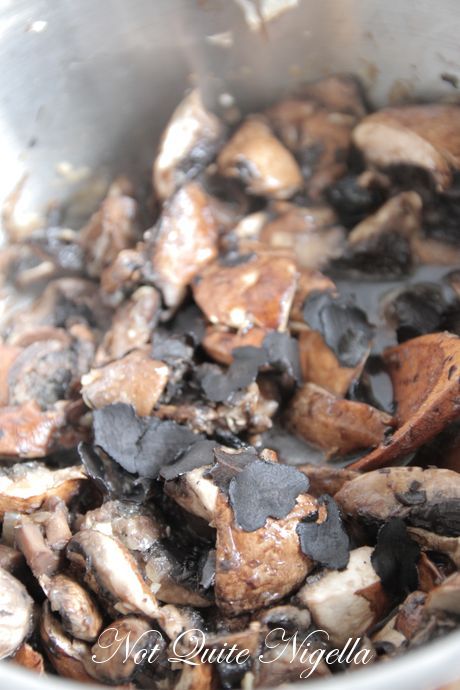 Step 3 - Add truffle tapenade and cook for 2-3 minutes. Add milk and cream and simmer for 45 minutes. 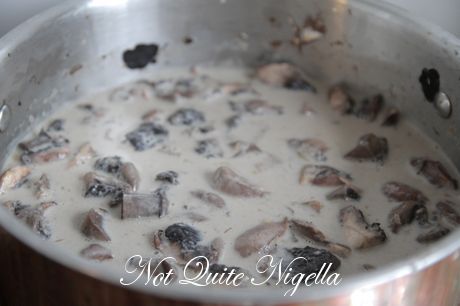 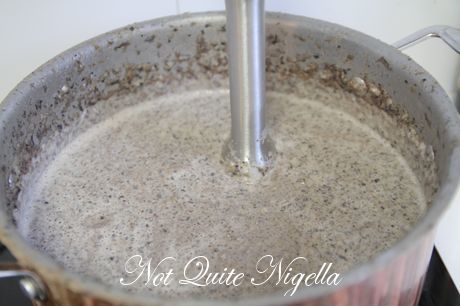 Step 4 - Blend in small batches to get a smooth and silky soup. Season with salt and serve.

This isn't really a recipe, I mean I'm sure you all know how to make a cheese toastie but once I pan fried them I never toasted them again.

Step 1 - Heat oil in a frypan on medium heat and in the meantime, butter the bread on the outside as this is the side that will be touching the frypan. Fry the sandwich until golden and then carefully flip over and fry the other side-if you're lucky there will be some holes in the sourdough where the cheese will ooze out. Slice in half and serve immediately with the soup. Or late at night by itself for a lovely supper. Treadmill tomorrow. 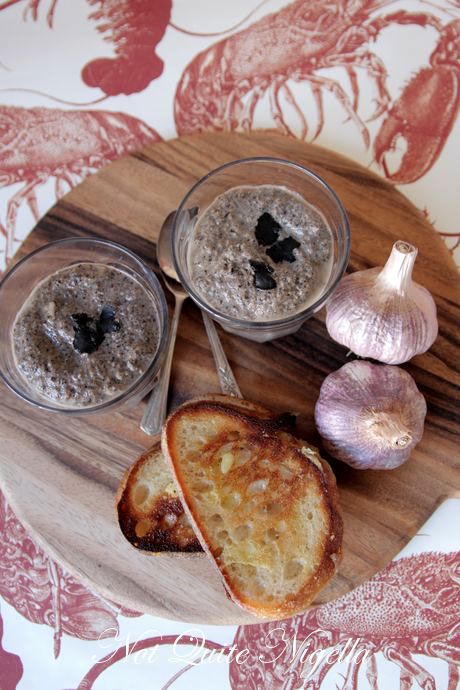