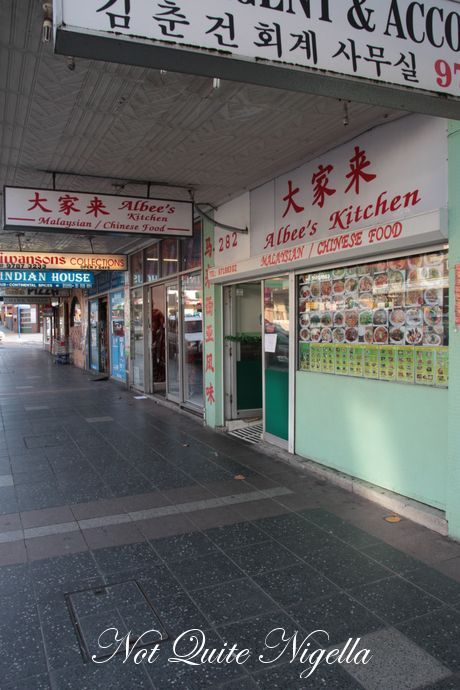 "Let's go for an adventure!" I say to Mr NQN one afternoon. We are well blessed with an unusually sunny day after what seems like weeks of rain shining down on us. And as my parent have loaned us their car while they were away we feel like we should go for a drive to seek out newer pastures to eat. A reader has told me of Albee's Kitchen, a small eatery in Campsie which is said to serve food whilst being a little challenged in the glamour stakes. 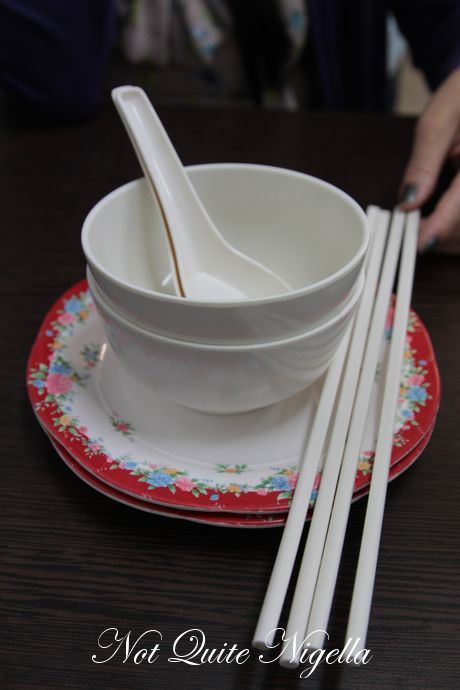 "Why are we eating dinner so early? You sound like your dad" Mr NQN says to me as we make our way over there at about 3:30pm. "We'll end up eating at 4pm" he points out quite rightly. My excuse is that I've skipped lunch in order to eat here and I'm very hungry indeed. Or perhaps that's what driving their car has done to me. Gulp, perhaps he is right...

"What a hoon!" I say as a grey headed 60 year old gentleman in a souped up car does burnouts down Claremont Street and screeches past us followed by his mate of the same age. Yes it seems like I am my father. 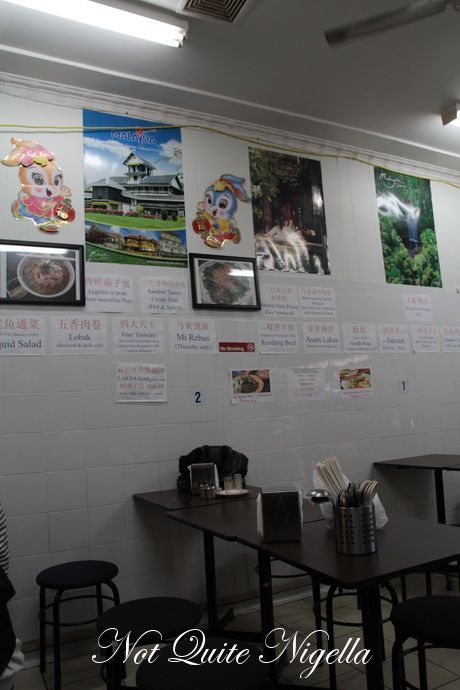 "Is that Marmite chicken?" I can see going through one of the three menus. I had seen Marmite crab at another restaurant months before and was dissuaded from ordering it by my dining companions so I always vowed to try Marmite something. There's a worn plastic covered colourful booklet with pictures plus a single laminated sheet with food specials and what it seems to be set meals i.e. the mains served with rice and there a laminated page of drinks on offer too. That's not even counting the items stuck to the wall. On the right hand wall are names of a number of dishes and on the left are framed pictures of dishes.

I know choosing a dish based on an odd name isn't the wisest choice but we choose a couple of dishes based on this including the aforementioned Marmite chicken, butter cereal king prawns as well as favourite such as char kway teow and a seafood and pork hand roll that the waitress recommended. For the last item we went for the set meal version which at $10 has one roll but also a bowl of chicken rice. I wash my hands in the bathroom which is through the kitchen and listen as the woks are going full steam ahead with the steady clunk clunk clunk of the metal wok scoop against the wok bowl . As I return to the table our first dish is ready. 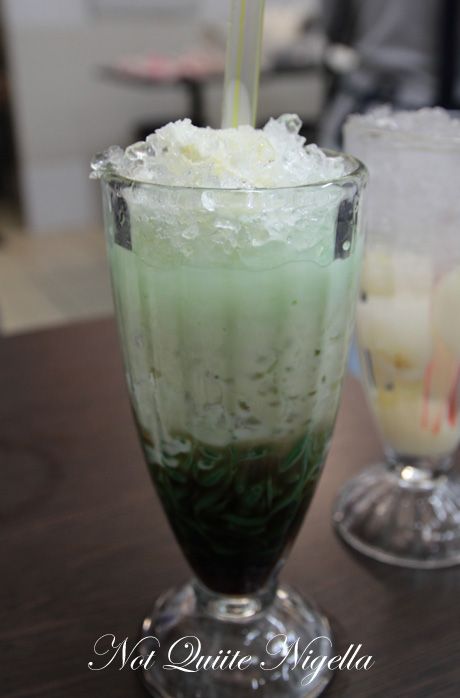 The straws given are fat bubble tea ones but the crushed ice is quite coarse so as a result you suck up a lot of ice. Most of this drink is ice with some coconut milk, palm sugar syrup and green tapioca noodles. What ends up happening is that because there is a lot of ice the green noodles get trapped between the ice. What is liquid though is good although there isn't a great deal of it. 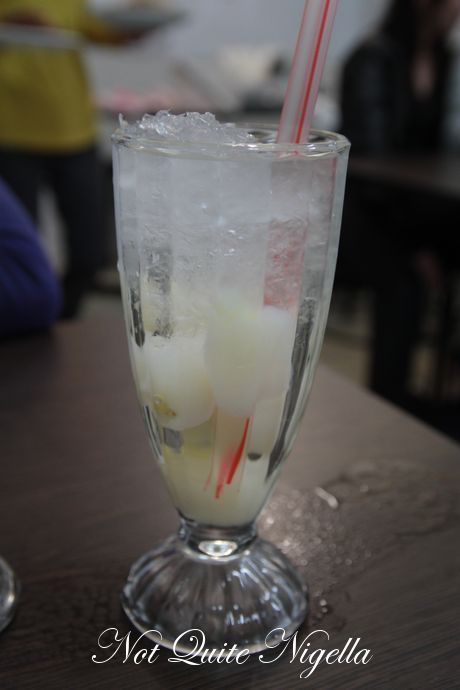 This drink is not particularly sweet or full bodied, particularly if you're trying it after the rich and sweet cendol. The rambutan comes from a tin and the pineapple juice can only be ever so slightly tasted (whereas pineapple is usually such a strong flavour) and there are small chunks of pineapple at the bottom. The overwhelming flavour is of the rambutan syrup from the tin. 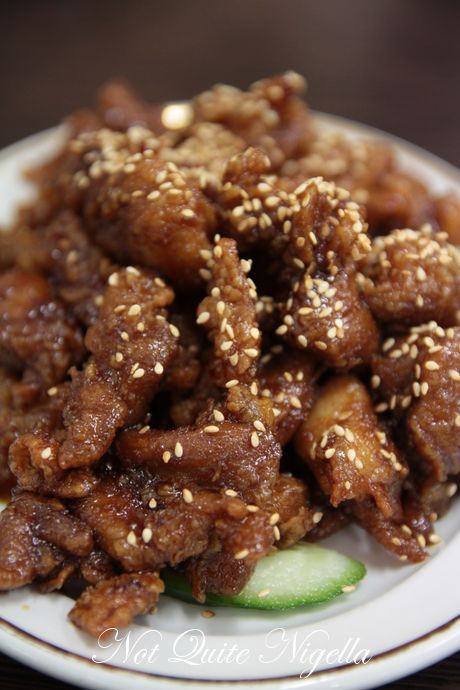 "This is like crack" I say taking the chopsticks and helping myself to some of the Marmite chicken. Not that I've ever had crack mind you! The dark meat fillet pieces are  both tendril-y pieces interspersed with juicy pieces of deep fried chicken tossed in a sweet, sticky sauce. It's similar to Imperial beef or Peking spare ribs with the juicy meat and crunchy exterior and sweet sauce. 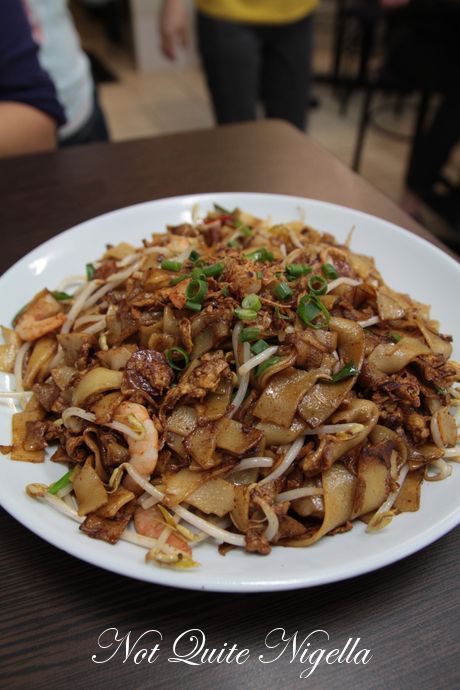 The smokey noodle dish comes next and I'm glad to see that it comes replete with small prawns and lup cheong (Chinese sausage) as well as rolled fried egg, bean sprouts, shallots and thick rice noodles. It has a nice char from the wok and is a tasty version of the dish. 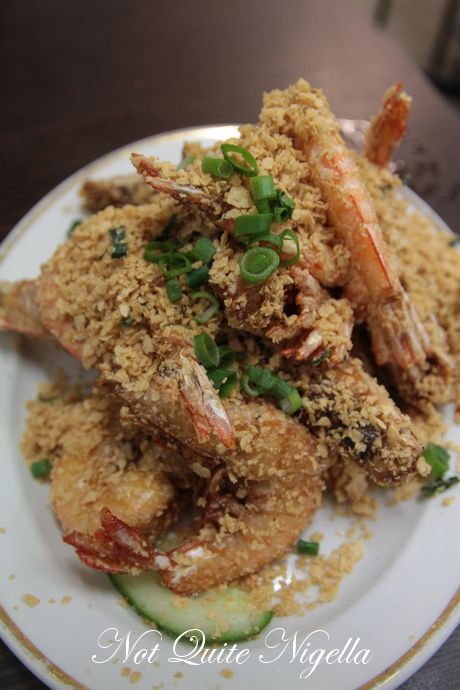 "What is that smell? It's like sweetened condensed milk or vanilla" I say to Mr NQN. The aroma of this when they set it down in unusual-distinctly milky perhaps from the crushed up sweet vanillaey Nestum wheat cereal with unshelled king prawns (a dozen in total, I have to count these things,  you can call me Rain Man ;) ). The prawns are juicy and meaty and well cooked but I do prefer shelled prawns and the cereal is very aromatic with vanilla. Neither of us are really going for the dish with only two out of the dozen prawns sampled. 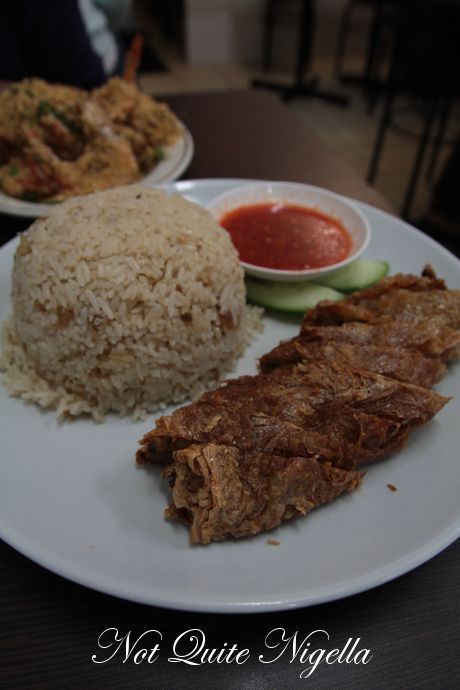 The set meal comes out last and the seafood and pork hand roll is a batter coated mince made up of seafood paste and pork mince with nubbly, slightly coarse chunks among the smooth spongey centre. It is also quite moreish indeed and disappears quickly even though we were quite full of the other items. The chicken rice is also excellent, rich with chicken broth and gingery with a nice dry texture and incidentally very good with the Marmite chicken too. 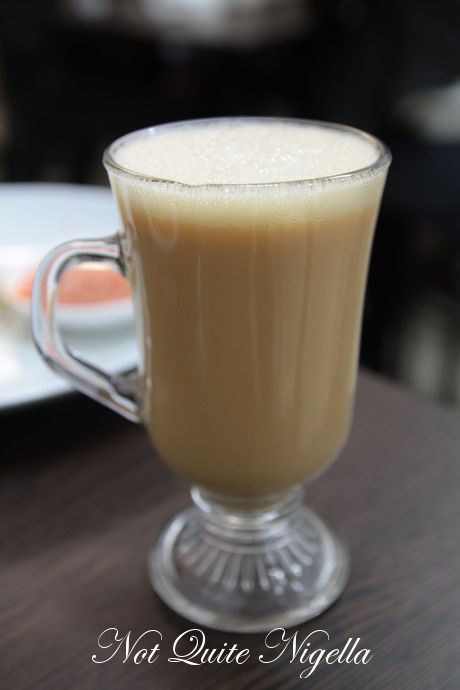 Mr NQN tires of struggling with the icey cendol so he orders a teh tarik ordered hot as he had enough of the ice. The teh tarik is quite weak and not the best we've had. 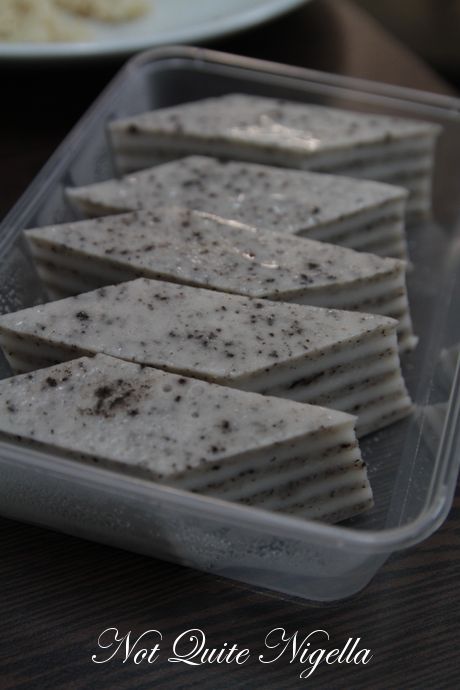 The dessert cabinet in the front has a range of kueh or Malaysian cakes. Today there are two: an kueh ango koo which are tortoise shaped rice cakes filled with sweet mung bean and there are also diamond shaped jellies made with black sesame and coconut which remind me of my mum's almond jelly (sadly I never liked that) so the supply goes to Mr NQN. I should have probably picked the ang koo which I love, not just because they are tortoise shaped but because they are filled with sweet mung beans on the inside.

We ended up with enough food for four and takeaway boxes are furnished (30c each) and there are plenty of leftover. On fact the leftovers will feed Mr NQN the next evening when I am out and it's long awaited thrill to add another restaurant to the $20 and under category.

So tell me Dear Reader, can the name of a dish persuade or dissuade you from ordering it? 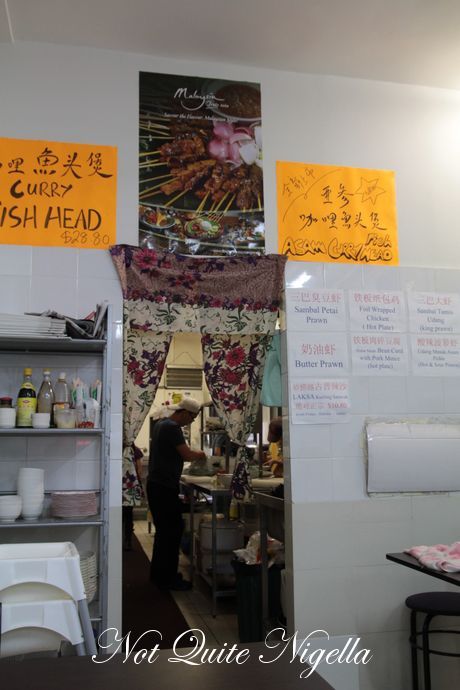