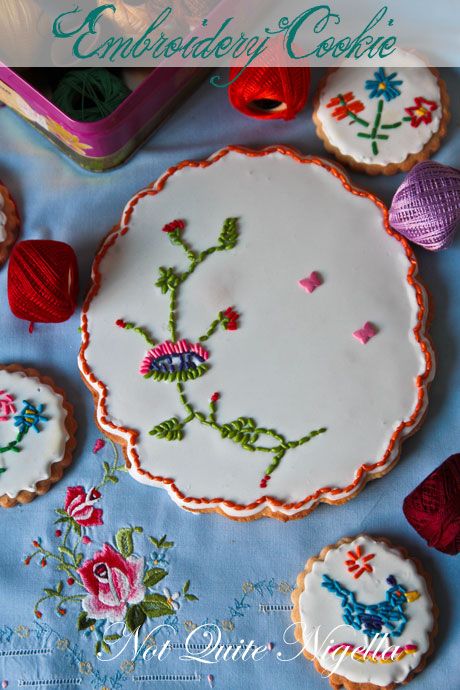 I was in the driver's seat. Mr NQN was next to me and on his face there was a grimace fixed as if he were bearing the worst torture imaginable.

No it wasn't water torture or even my driving, it was my singing. I have an unstoppable compulsion to sing even though all evidence points to the fact that I am quite likely tone deaf. My singing usually happens in public or at home (but oddly never in the shower, that's my silent thinking time) and Mr NQN puts up with it because he knows that he can get away from it-literally he will walk away while I sing. 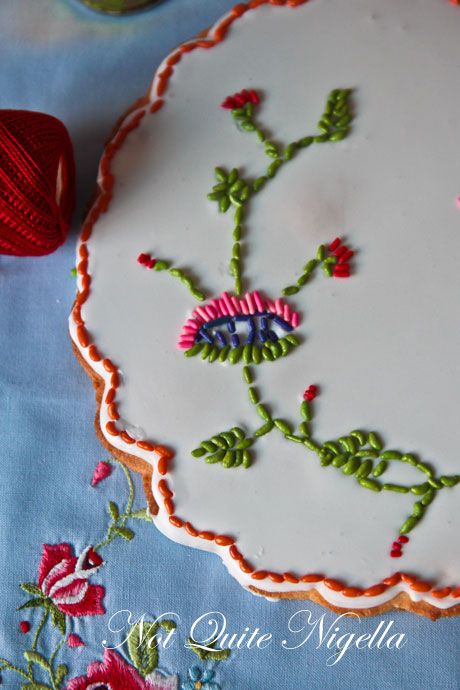 We were in the second hour of a 2.5 hour drive to the Hunter Valley and suddenly one of my favourite songs came on. It was Adele's "Someone Like You" which Adele fans knows requires big lungs and an ear that doesn't double as a tin can. All of these things were mere technicalities that I ignored and I couldn't help myself. Ignoring the pained look on Mr NQN's face I sang like I was auditioning for Australian Idol. You know the auditions that they have a laugh at and put on the blooper reel. An excruciating 4 and a half long minutes later I was finished. And Mr NQN looked as though he was about to jump out of the car he was so squashed against the car door. I wanted to sing and no-one was going to stop me. 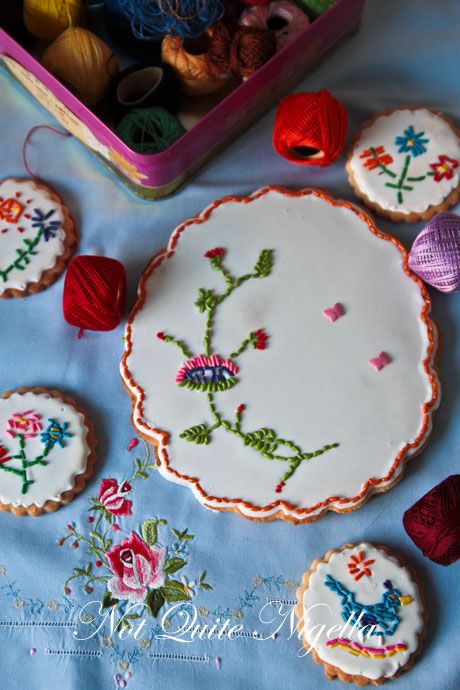 There are lots of things that I have compulsions for. I take that as a hallmark of the OCD type of which I am. One of them is decorating things and making giant or conversely miniature of anything. I first saw this embroidery cake on dessertgirl's blog and the cake was originally at A Clockwork Lemon where she made a beautiful cake inspired by an embroidery pattern. I became obsessed. I wanted to do it but I wanted to do it on a cookie. And not just any cookie a giant cookie plus some small ones just in case. 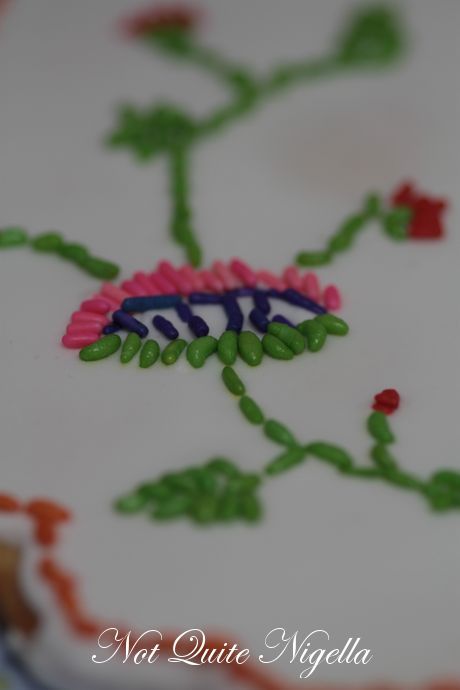 Now just to add to the whole obsessive compulsive element I wasn't able to find these larger sprinkles sold separately so one evening I separated the colours. This quickly lost its appeal as you can imagine and by the time I got to perhaps 20 of each colour in a bowl I dropped my tweezers bored and exhausted and drifted off with fantasies of living in Louisiana with a wickedly good looking bunch of vampires, werewolves and shapeshifters. 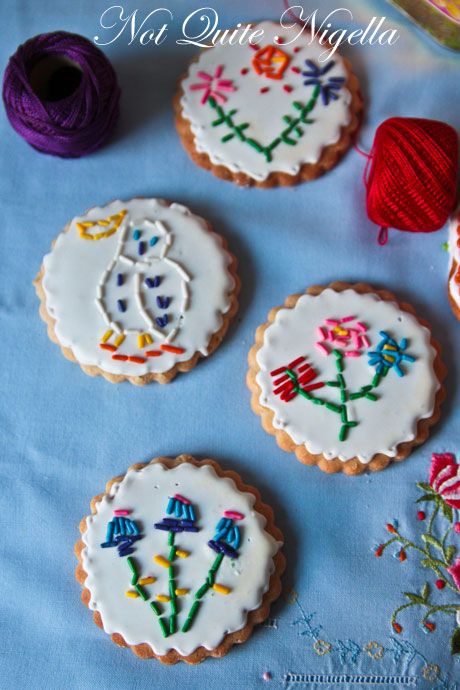 The baking of the cookies are easy and filling an outline with royal icing and then flooding it is straightforward. I used an embroidered doily that my mother loaned me as inspiration. I decided to do a flower and bird theme for the smaller cookies vaguely approximating an owl (hopefully) and a blue bird if only in colour if not appearance. The most fun was decorating the larger cookie and I think that if you squint you might think that it looks like embroidery although I will leave the final verdict up to you. I will suggest that if you are lacking patience, make the smaller cookies as doing the scalloped outline drove me slightly over the edge. Still the look on the face of my friend who I gave this to was worth it- a small sacrifice for sanity ;)

So tell me Dear Reader, can you sing? And what is your karaoke song? 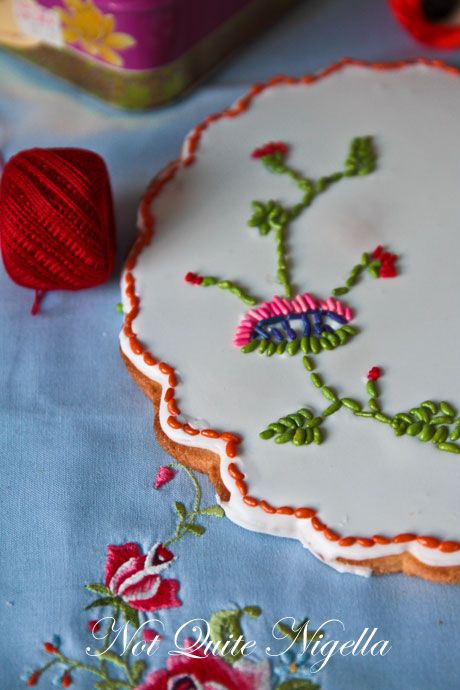 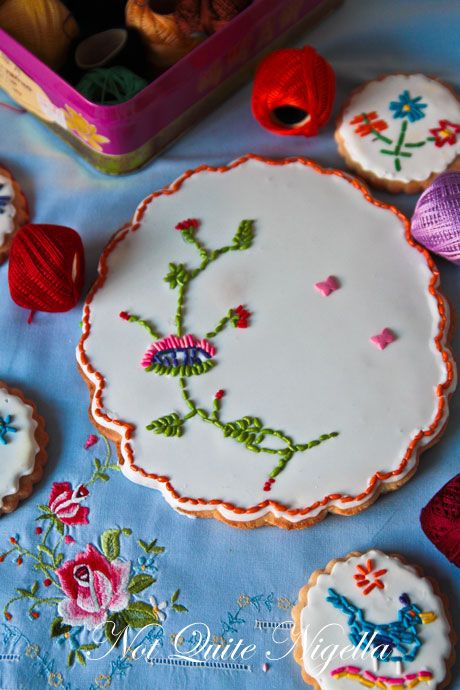 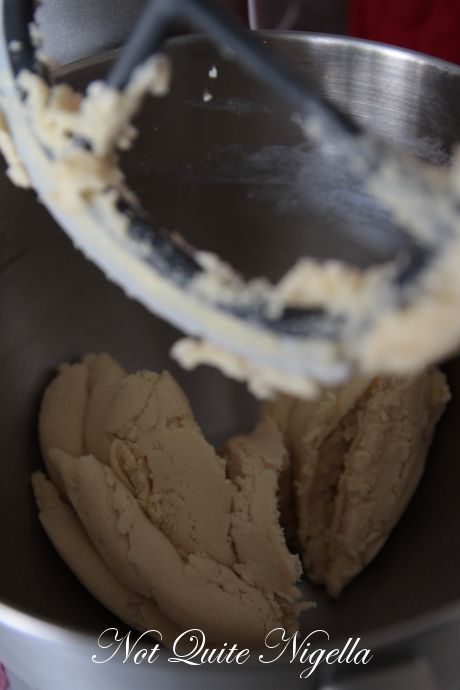 Step 1 - In a large bowl, cream together butter and sugar until smooth. Beat in egg and vanilla. On the lowest speed add in the flour . Cover in cling film, and chill dough for at least one hour (or overnight). 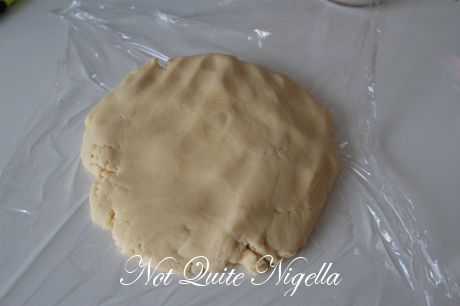 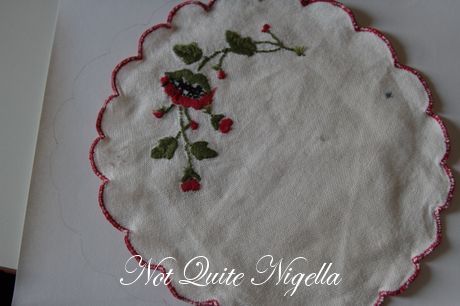 Step 2 - With a sheet of A4 paper cut out a circle of about 18cms in diameter and make scalloped edges-I used the embroidery that my mother loaned me as a guide. 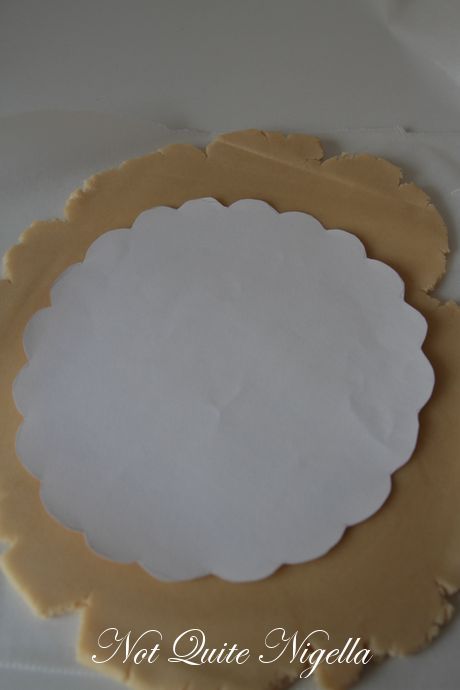 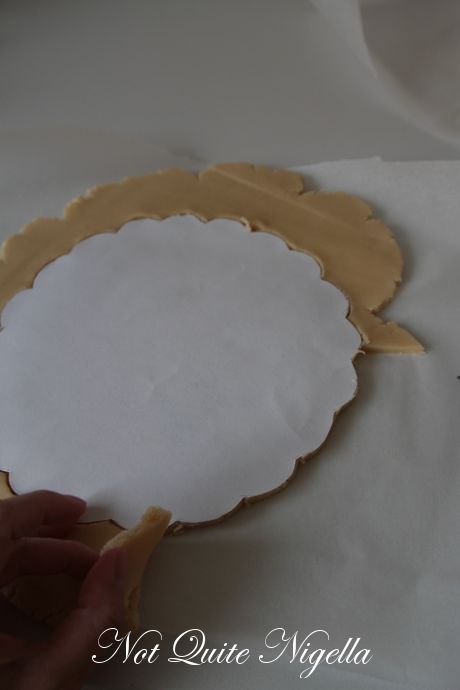 Step 3 - Preheat oven to 400 degrees F (200 degrees C). Roll out dough between two sheets of baking parchment 1/4 to 1/2 inch thick. Place the paper stencil on top of the rolled out dough and using a small paring knife cut out the outline and remove the excess dough from around the outside. Re-roll the excess dough and cut out some smaller cookies using a scalloped cookie cutter (my smaller ones were 7cms in diameter). Bake the smaller ones in the oven for 5-8 minutes and the large cookie for 15-18 minutes until lightly golden around the edges. Allow to cool. 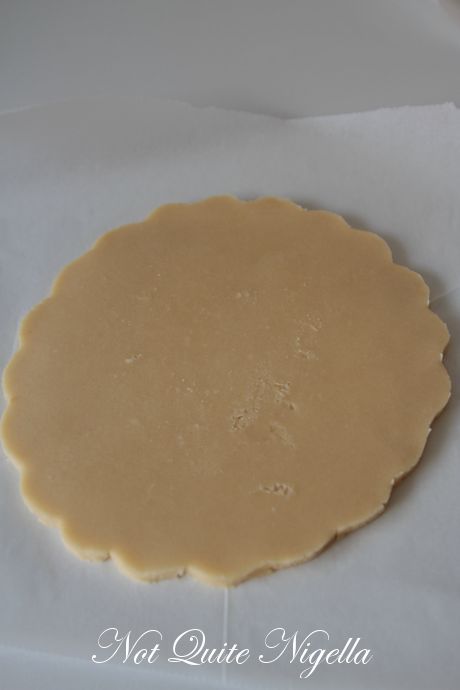 Step 4 - Have your sprinkles ready as once you fill the cookie with the white royal icing, you will need to place the sprinkled on straight away. Make the royal icing (this will make more royal icing than you need but it's hard to halve an egg). I make the royal icing very quickly in my cordless Braun mini blender. I place the unsifted icing sugar in the container and blitz this for about 20 seconds until the lumps are gone. Then I add the egg whites and lemon juice and then blitz it again until it is smooth. 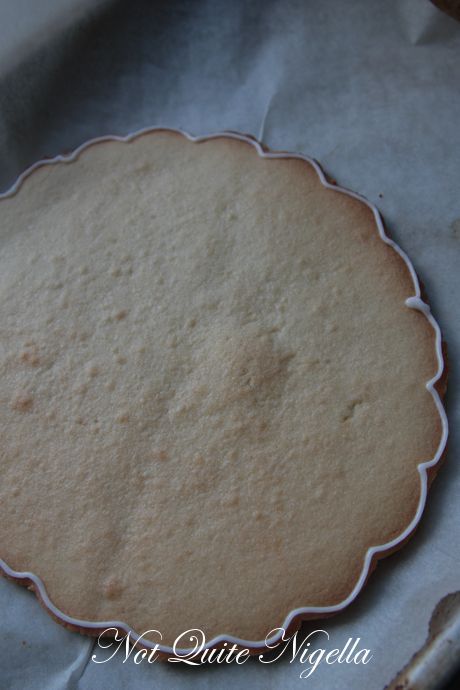 I checked the consistency by drawing a line and if it holds well without blurring then it is ready. If it is too stiff add a few drops of water, if it is too soft, then add some more icing sugar to achieve the consistency. Then fill a small piping bag with the royal icing (I usually make a small cone using a square of parchment) and draw an outline around the scalloped edges of each of the cookies. Allow to set-I did this on a cold, dry Winter's day and it set within 10 minutes. In humid weather it will take longer. 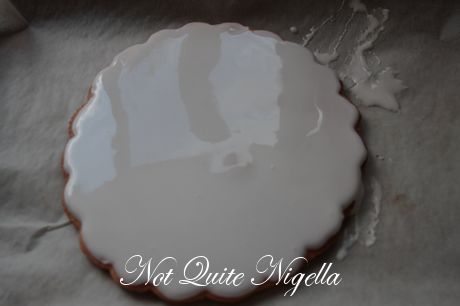 Step 5 - Add a little warm water to the remainder of the royal icing (a few drops will do) and whiz the icing around to combine and smooth the texture-you will get a few air bubbles so have a skewer or toothpick ready to burst these. Using a spoon "flood" the inside of the outline reaching up to the edge. Don't use too much-you can see I was a little over eager and flooded the giant one a bit too much and it spilled over the edge in a couple of places-oops! 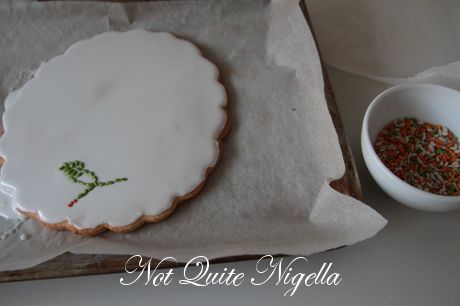 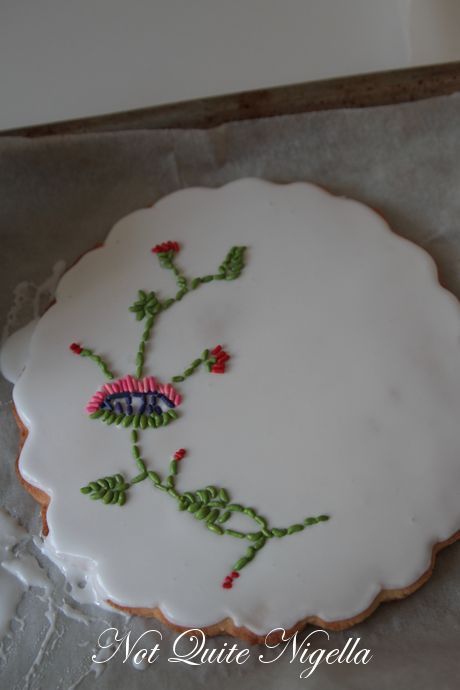 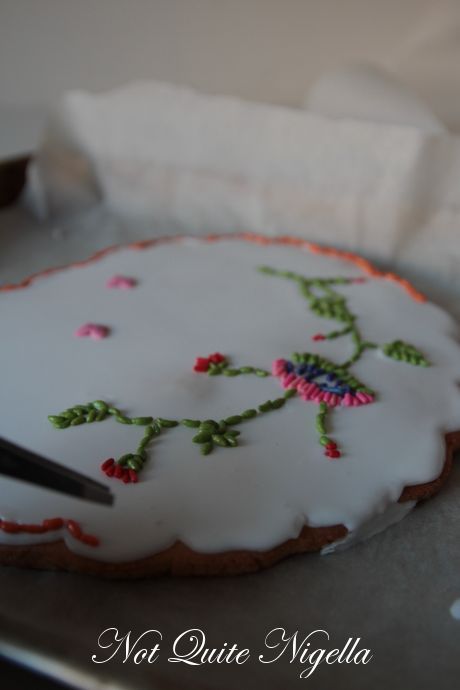 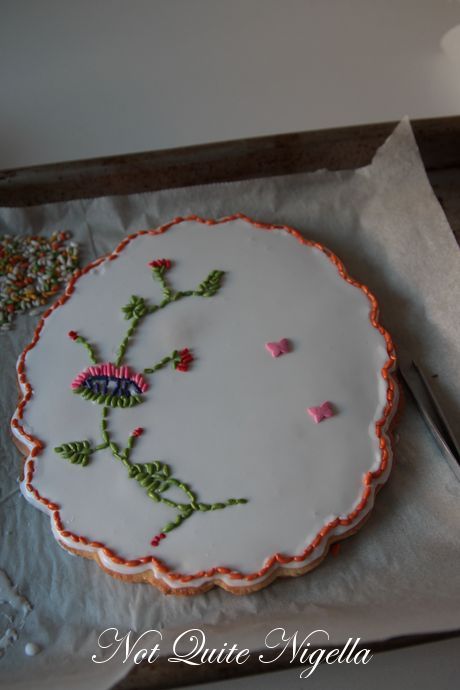 Step 6 - Now working quite quickly as you want to place the sprinkles while the icing is still wet so that they adhere to the icing. Using your tweezers carefully place the sprinkles individually. The larger cookie took about 45-60 minutes to decorate and the smaller ones about 5 minutes to decorate-the scalloped edge takes a long time too so don't start it unless you want to finish it (I wished I hadn't on the larger cookie!). Allow to set. 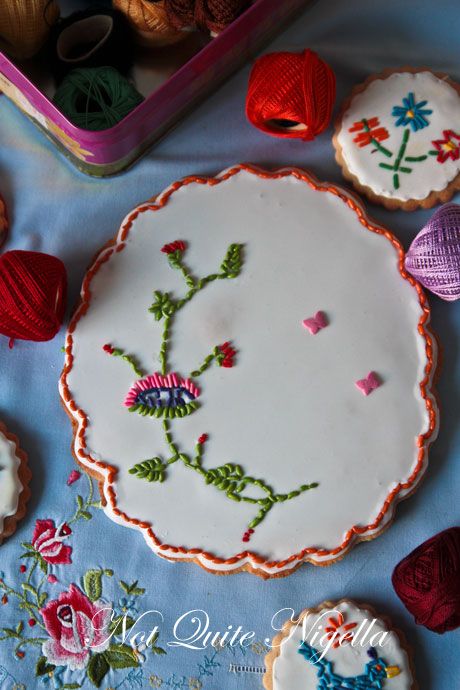