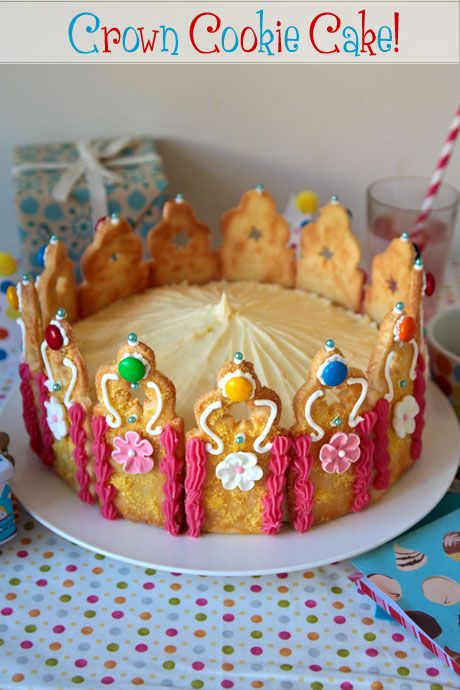 The other day I tweeted "Busy making Mr NQN's birthday cake...I tried to make it masculine but I keep going towards flowers and pink :S"

It was true. Try as I might I was driving down a slippery road lined with cake and veering towards pink icing and flowers despite trying to steer myself towards butch and masculine cake colours. Allow me to rewind.

"What kind of cake do you want for your birthday this year?" I asked Mr NQN a few weeks ago.

"Hmm" he said stroking his chin thoughtfully. Then a mischievous look crossed his face and he said "How about that apple cake layer thing?".

I knew the cake that he meant. It was the thousand layered apple cake that required the painstaking layering of hundreds of paper thin slice of apple. It gave me PTSD and that took hours and that I never wanted to make again.

"Sorry but no" I said firmly. 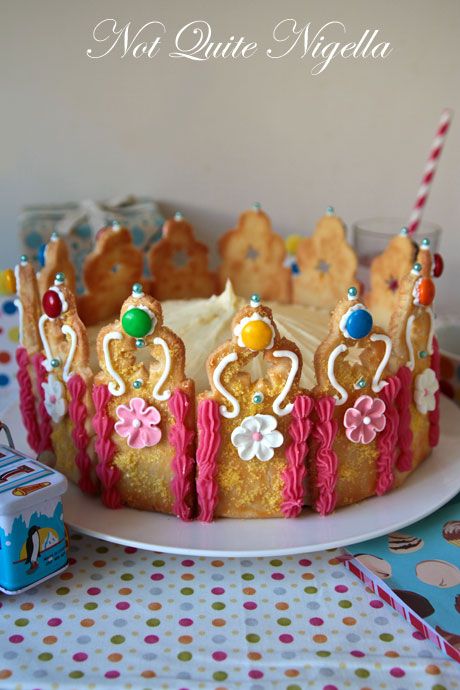 "OK well anything apart from a handbag cake then" he said grimacing at the memory. Yes the handbag cake had become somewhat of a notorious birthday cake. I had just gone to a Planet Cake cake decorating class and spent a day decorating a cake and I just wasn't up to the task of doing another for his birthday. In my defence, it was blue...but yes, it was a handbag too. 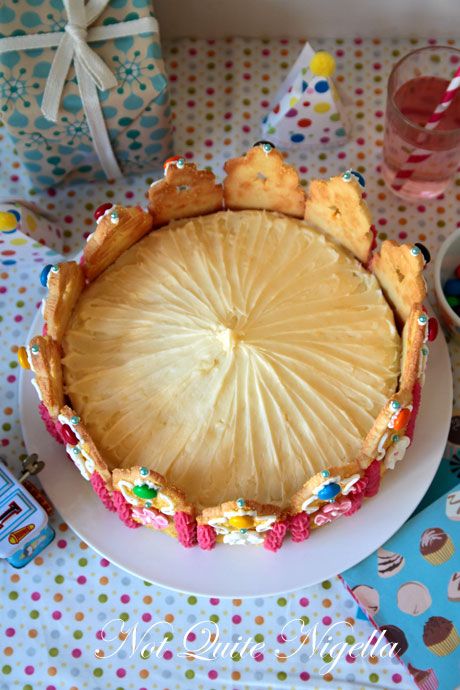 But then serendipity played a large part in this year's cake. One day I was thinking about what sort of cake to make Mr NQN when an email from loyal reader Joanne popped into my inbox. She had come across a cookie crown cake that she thought that I'd like and it immediately caught my eyes! You see I call Mr NQN the Prince of Finland because despite the hippie upbringing he can be a little fussy about certain things and inside that casual hippie exterior lies a finicky prince. So off I went baking the cookies and cake. Then when it came to decorating it a courier arrived with a package of Queen's latest cake and cookie decorating items including some icing pens that I had been curious about, edible flowers, tri colour cachous and suddenly I had the makings of a crown cookie cake! Except errm it was pink... 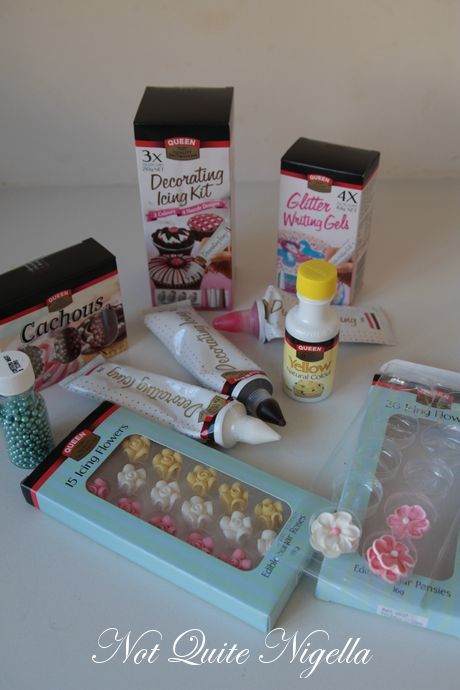 I did try quite hard to butch it up but it was hard as one of the icing tubes was pink. I showed him the cookie while he was decorating it and he raised an eyebrow but didn't object so I kept going. Not that an objection would have stopped me necessarily, I was already elbow deep in icing. Oh and did I mention the cake itself? Well you won't believe what the main ingredient is. It is a tin of tomato soup! 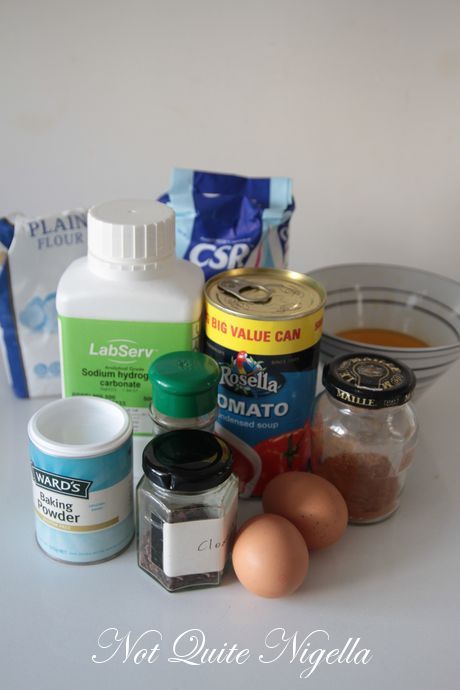 I realise that this is along the lines of the Ritz apple pie but trust me in that this cake tastes nothing like tomato soup once baked. It has a wonderful, dense, moist texture and is fragrant in the spices that you use. In fact it reminded me of a gingerbread spice cake more than anything! And of course I loved serving this up to Mr NQN's family and getting them to guess what flavour it was. That night I took it to a restaurant in my new Tupperware cake holder which I got in the post from them a week before to road test. I had been coveting my mother's for years and while she lends me a lot of things, she likes to keep this one close as she knows that she'd never see it again. It's much sturdier than a cakebox and makes cake transportation a non issue (and bakers will know how hard it can be to transport cakes). 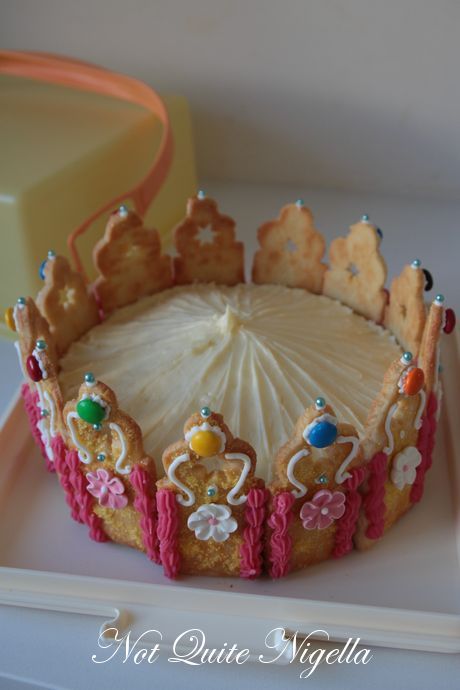 I served it to them in slices and they took the guessing game very seriously. Pieces of paper and pens were taken out and it took a good twenty minutes before they started getting close to the canned section of the supermarket. Then Mr NQN's cousin Sam mentioned tinned soup and then his sister took the final guess of canned tomato soup! Of course you don't have to make a tomato soup cake. Your favourite cake will do. 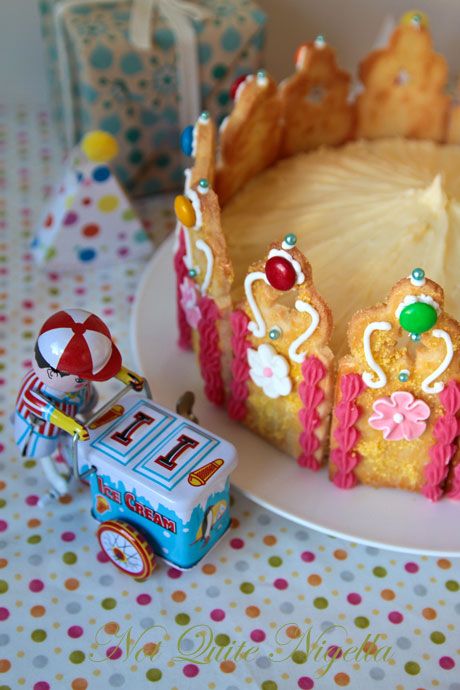 Crazy cake or not, this cake is for Mr NQN who puts up with a lot of squealing and general nuttiness. This is also the man who also:

Doesn't mind that I call him during the day speaking in a Southern accent because I've been watching too much True Blood...

Likes to send pictures of monkeys to people along with cryptic David Thorne like correspondence...

Wore a superhero cape when he was little...

Laughs when I randomly yell out quotes from 30 Rock like "I got the meat, Jack!" and "there should be more tv shows about cake"...

Doesn't mind when I give him handbag birthday cakes...

So tell me Dear Reader, what kind of birthday cake have you always wanted? And what was your favourite birthday cake? Did you get any strange cakes or cake wrecks? 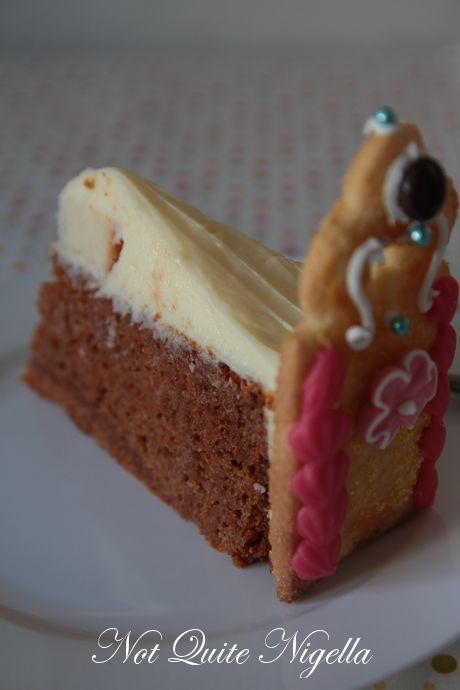 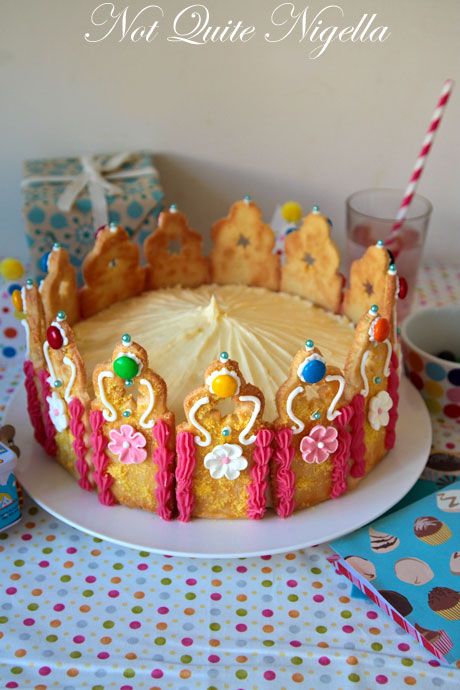 To make 1 cup of cake flour, add 2 tablespoons of cornflour/cornstarch to a measuring jug and then top up to the 1 cup mark with plain/all purpose flour. Mix well. 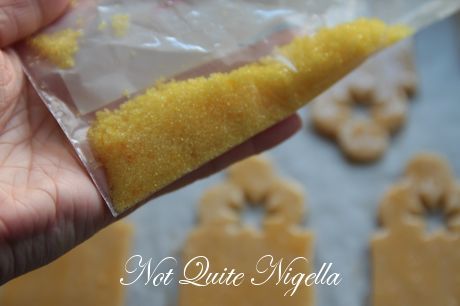 1.Make the cookies first as they will have to dry.  To make the cookies: In the bowl of an electric mixer beat the butter and sugar until pale and fluffy. Add the egg and beat until combined. Then stir in the flour and vanilla until combined. Take a sheet of cling wrap and pat down the cookie dough into a flattish circle. Refrigerate for about an hour. Meanwhile print off a stencil for the cookie pattern here . Trace onto some clean cardboard and cut out. Make some yellow sugar by placing the sugar in a ziplock bag along with a drop or two of yellow food colouring and close up firmly and shake to distribute the colour. 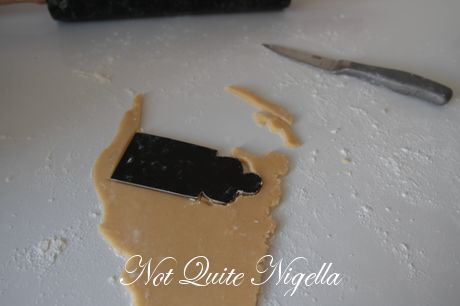 Step 2 - Dust a surface lightly with flour and then roll out the dough. Using a small paring knife use the cookie guide to make 13-14 cookies (a couple of spares just in case, I needed twelve for my cake). Place the cookies 1cm/half an inch apart on a parchment lined baking tray.  Brush the tops lightly with egg yolk and the sprinkle with the yellow sugar. Bake for 10-12 minutes. Cool on tray. 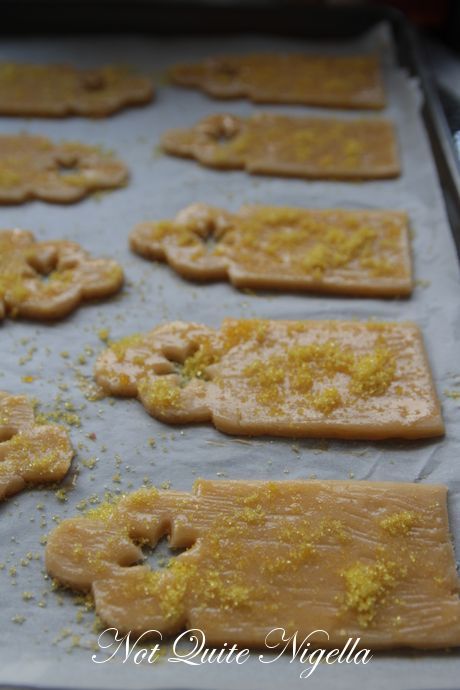 Step 3 - Decorate the cookies using the pens and decorations as shown. The Queen pens set firm overnight although I found that the pink icing pen was much softer and took longer to set than the white. Other than that, I liked the tips given (straight, scallop and leaf) and being able to easily screw them onto the tubes. 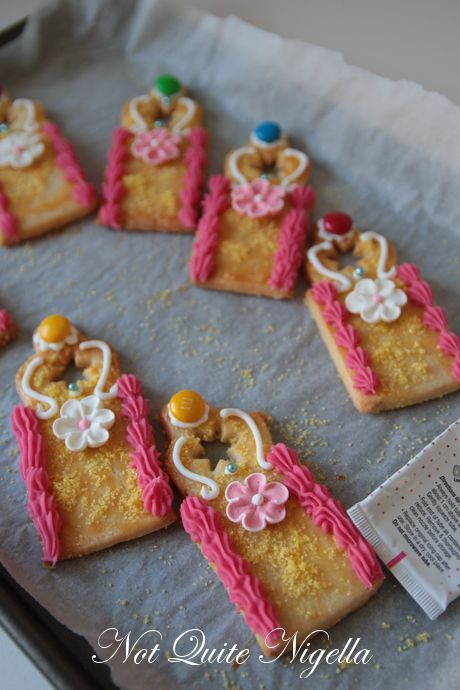 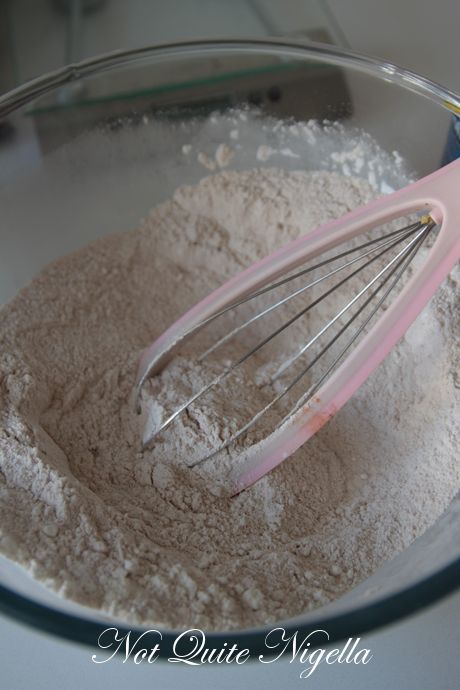 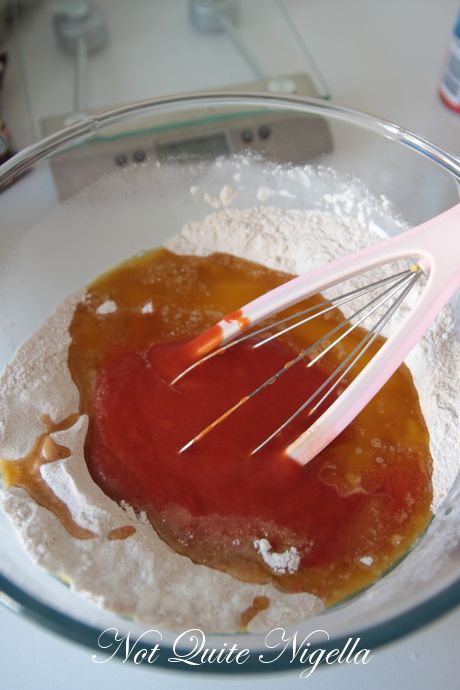 Step 4 - To make the tomato soup cake preheat oven to 180C/350F. Grease and line a 20cm/8 inch springform tin with baking paper. In a bowl add the flour, baking powder, soda, sugar, cinnamon and all spice and mix well to combine. Add the tomato soup (undiluted), melted butter, eggs and water. Mix well until combined. Pour into the prepared tin and bake for 60-65 minutes until a skewer inserted inside comes out clean. Allow to cool. 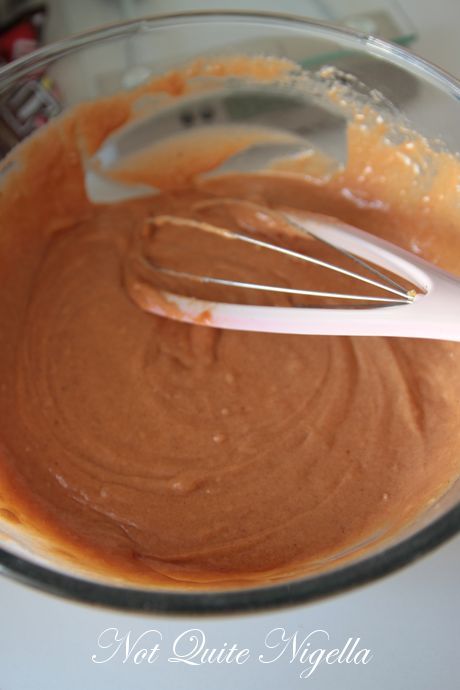 Step 5 - To make icing: beat the cream cheese and butter in the bowl of an electric mixer for 2-3 minutes until smooth and there are no lumps. Add the icing sugar in three lots and beat until combined. 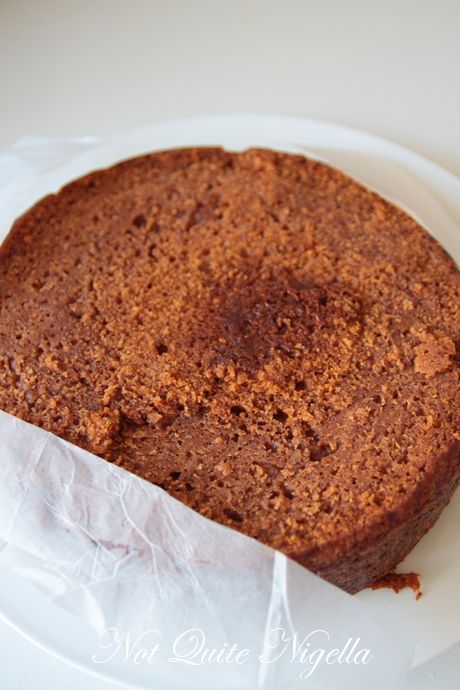 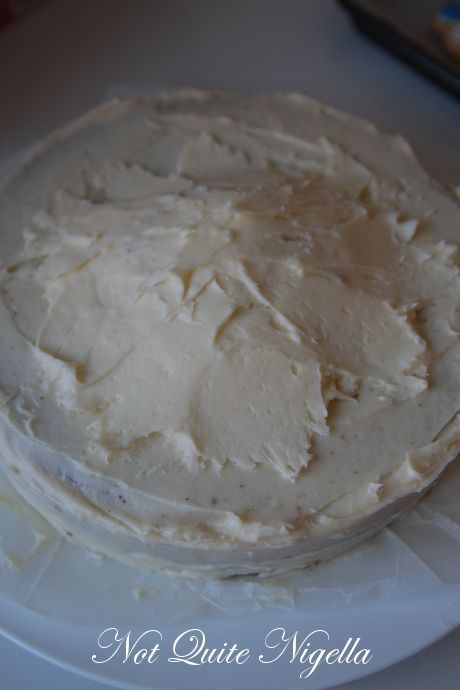 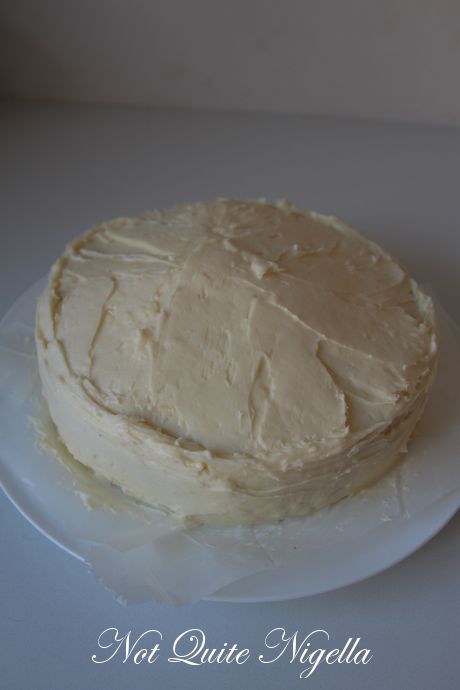 Step 6 - To assemble the cake: sometimes I get cakes that dome and sometimes I don't. We actually want one in this case but of course it didn't. I levelled off the top of the cake with a sharp knife and kept the scraps. I turned the cake over to give it a completely smooth surface and then added the scraps on top in the centre. Then using a thin layer of the frosting I made a crumb coat-this is a layer that will catch all of the crumbs. After you finish your crumb coat, refrigerate the cake for 30-60 minutes to set it. Then with a clean angled metal spatula layer a final coat of frosting, there should be enough to develop a peak smoothly. Don't worry too much about the sides as they will be covered by the cookies. To make the icing effect on top use the back of a teaspoon and drag the icing from the outside to the centre. Then attach the cookies to the side-mine only _just _fit! 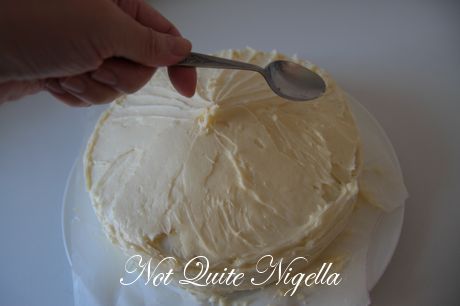 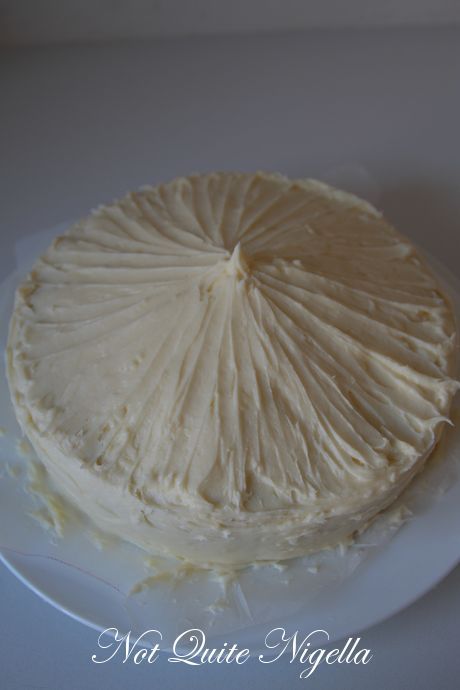 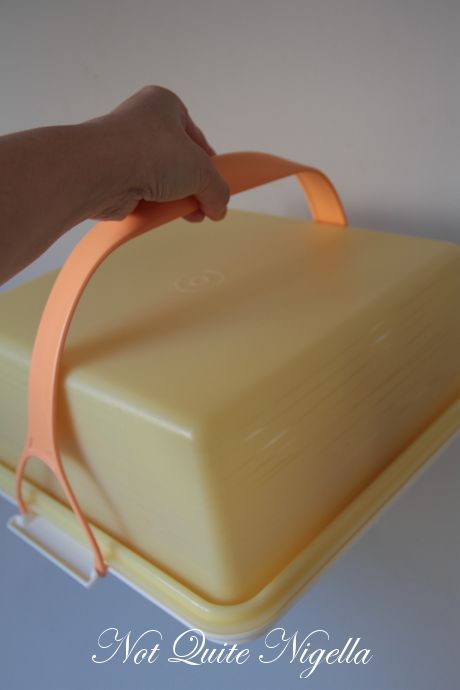 Another look at the cake transporter-with handle! 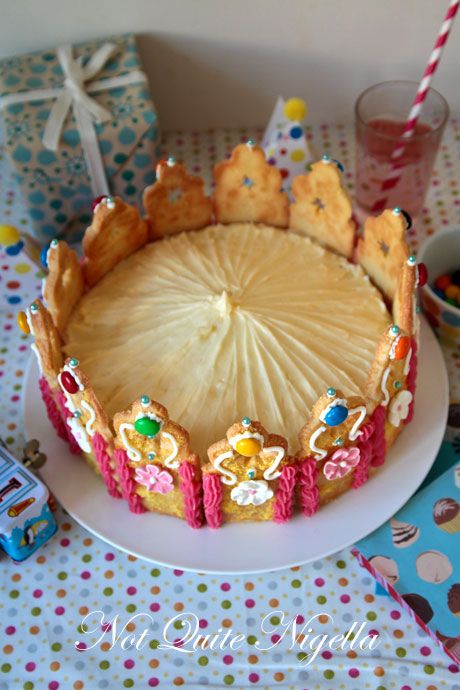