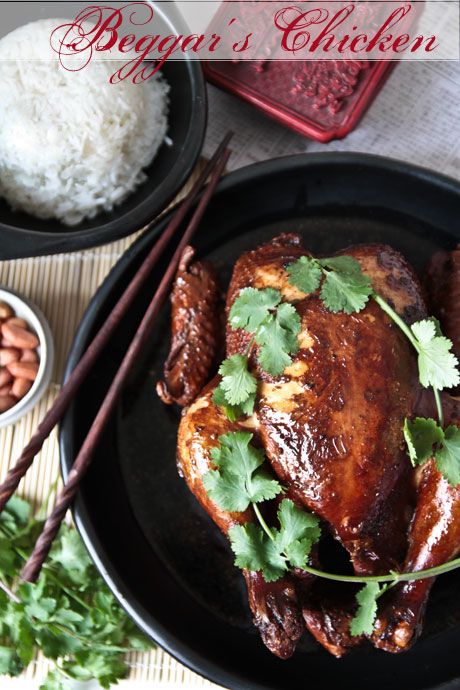 A few years ago when I was first getting to know Mr NQN's family, B.B. (Before Blog) I was always the cake maker for family birthdays. I still am at times, although because of the amount that I travel I can't promise that I can make a cake. And one time I made a cake, it was an absolute disaster.

I was trying to make a good impression on the Elliotts. I wanted to show them that city folk weren't all Type A personalities (but by trying to prove this I was actually being quite Type A). Mr NQN's brother the Assman was having a birthday and I promised that I would bring a cake. For an indication of how new I was to the fold I decided to make a pavlova which meant that I had no idea about the no egg rule for his mother which I would later learn in resounding detail. I decided to make Nigella's chocolate pavlova with raspberries because it was delicious and easy too.

That afternoon I diligently cleaned the beaters and bowl even running a cut lemon over them to ensure that there was no trace of fat on them )this was of course years ago and I now fly by the seat of my pants and just hope that there is no fat on the beaters!). I borrowed my mother's Tupperware cake transporter and sat the pavlova inside it, added the cream onto it along with the raspberries and chocolate shavings. We took the cake box along with us in the car (and why are there so many speed bumps?). The birthday dinner was at an Indian restaurant and the staff placed it in the fridge until dessert time. 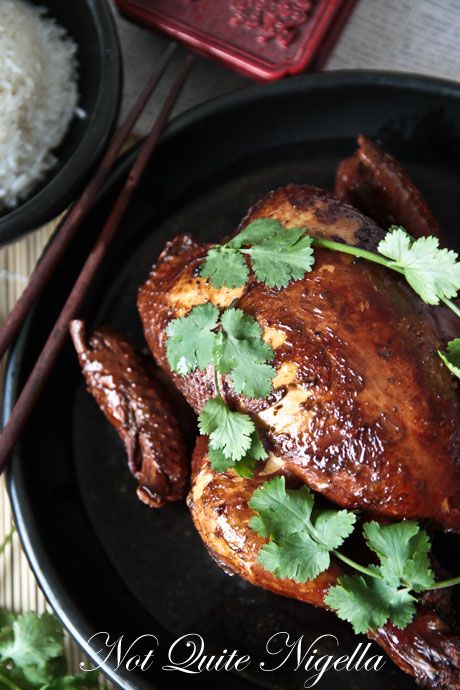 "Ummm Miss" the waiter said to me over my shoulder once the main dishes had been cleared. "The cake...it's" and he trailed off giving a strange look as if something peculiar had wafted under his nose. I pushed back my chair suddenly and made my way towards the kitchen where they revealed my pavlova. What had been a pretty if amateurish specimen, in real estate terms, a "fixer upper", now resembled a massacre scene. Dripping wet raspberries leaked onto flaccid cream pockets while the foundations were ragged edged, sticky, oozy chocolate bits. I almost wept. I had no tools to fix it with and neither did the restaurant so I had no choice to take it out.  And so I served it up, looking like a vivisection gone terribly wrong. 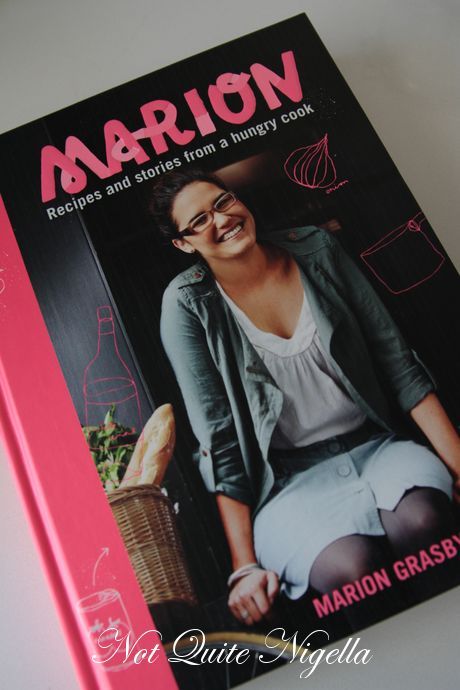 So what does that have to do with this chicken? Well when I took this chicken out of the water I was at first dismayed by the fact that the skin had broken because I thought that it wouldn't be photogenic enough. But then I thought about it and since the chicken has simmered for a good hour then of course the skin was delicate and when I turned it over to see if the other side had a tear I then proceeded to tear half the skin off the back of the chicken. But I realised that I needed to not just make pretty pictures but real pictures that show readers what their dishes will look like. 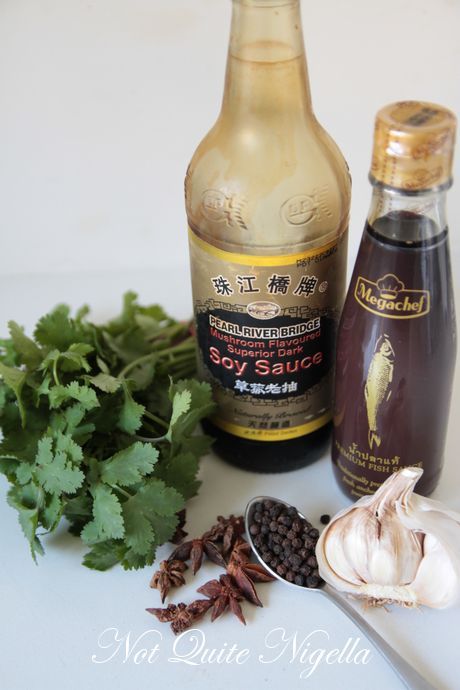 This chicken dish was out of the new cookbook by Masterchef Season 2 contestant Marion Grasby that I was sent to review. She is a lovely lass that I have met on a couple of occasions. This recipe is a family recipe and she told me "My Dad always used to tell me that my Mum's Beggar's Chicken was one of the dishes that made him fall in love with her. So weird to think of parents as 'courting' but Mum certainly got Dad's attention with this recipe way back when. Maybe Mum should have called it her 'Man Catcher Chicken' :-p Jokes aside though, it's one of those iconic childhood dishes for me and even the smell of that chicken simmering away in the deep, dark star anise broth gives me comfort and makes me smile." Marion says in the book that the chicken needs no carving as it is so soft and you simply reach and tear off the piece of chicken that you want and I loved that idea of sharing things with family like that, extended or not.

So what did the Assman and the Elliotts think of the cake? Well clearly it didn't end too badly as I became a member of the family. But I kind of knew I had chosen the right people (even if they do drive me a bit spare at times) because their reaction was to ask why I was looking so upset and that the cake looked beautiful (don't you just love it when they lie?). Mr NQN's uncle Seppo was utterly kind about it and said that it tasted wonderful and people asked for seconds.

And I'll always remember it as the vivisection pavlova ;)

So tell me Dear Reader, do you get upset when something doesn't turn out as it does in the picture or not as prettily as you want it to? And have you had any recent cake disasters? 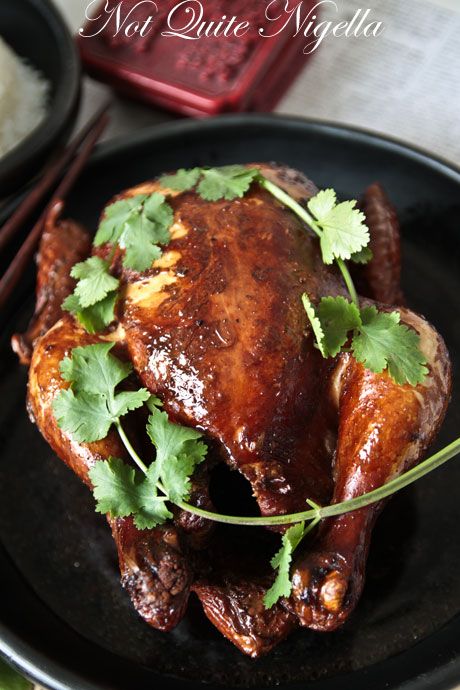 Adapted from "Marion: Recipes and stories from a hungry cook" by Marion Grasby published by Pan Macmillan $49.99 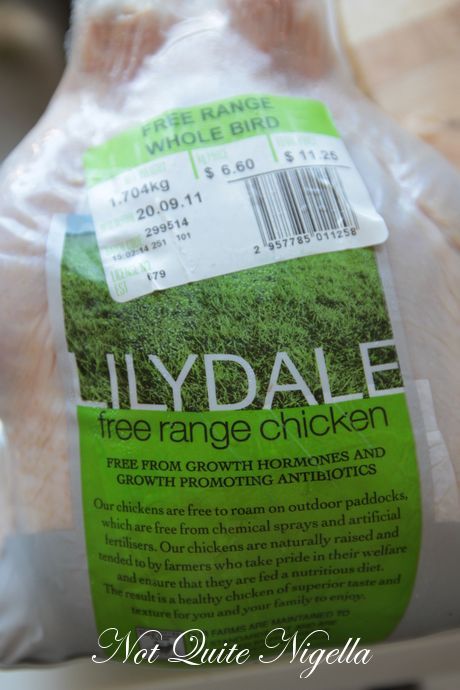 Step 1 - Cut the coriander about 4-5 cms or 2 inches from the root end. Rinse the coriander roots thoroughly under running water making sure to pull back the stems as a lot of dirt hides inside the roots. Reserve some leaves for garnishing. Place the roots in a mortar and pestle along with the peeled garlic and peppercorns and bash away to make a paste. You can do this in a small food processor but you will need to grind the peppercorns first as the food processor will not blitz them. 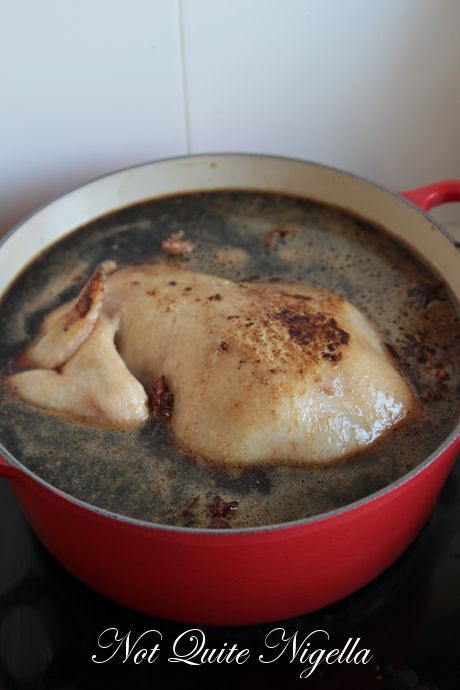 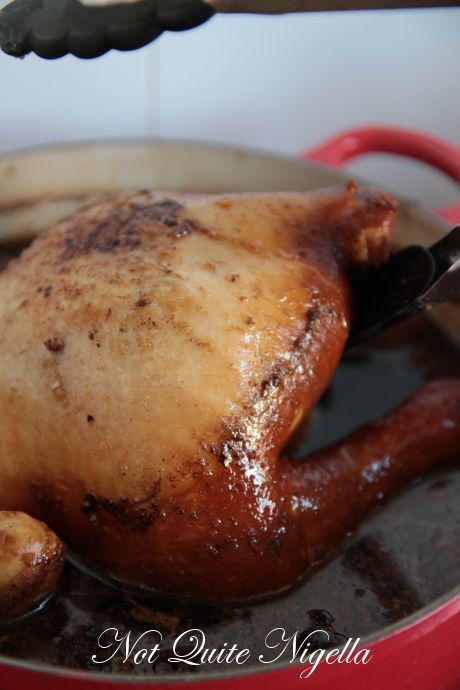 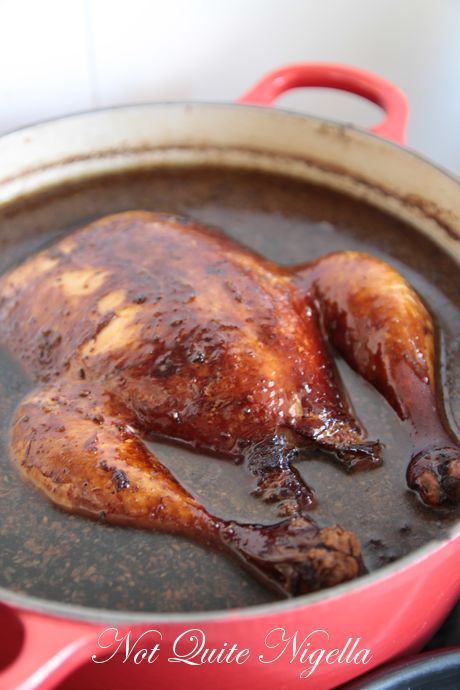 Step 3 - Once done, carefully lift the chicken out of the stock and place on a serving plate. I let it cool down for a bit and used a pair of tongs in my right hand and a dishwashing glove on my left and that seemed to work just fine. Serve with steamed rice. Taste the stock and add more salt or soy if necessary (although the dark soy is strong stuff so go easy on it). Spoon some stock on the rice or you can use the stock as a base for noodle soups. I also found that I had so much of the leftover stock that I used it to make a flavoured rice. I just used the same amount of stock in place of water when boiling the rice and it came out a lovely glossy brown rice with a nice, mild flavour. 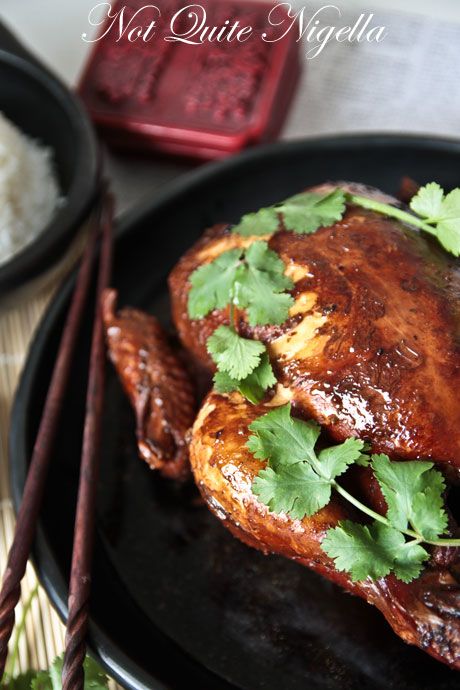