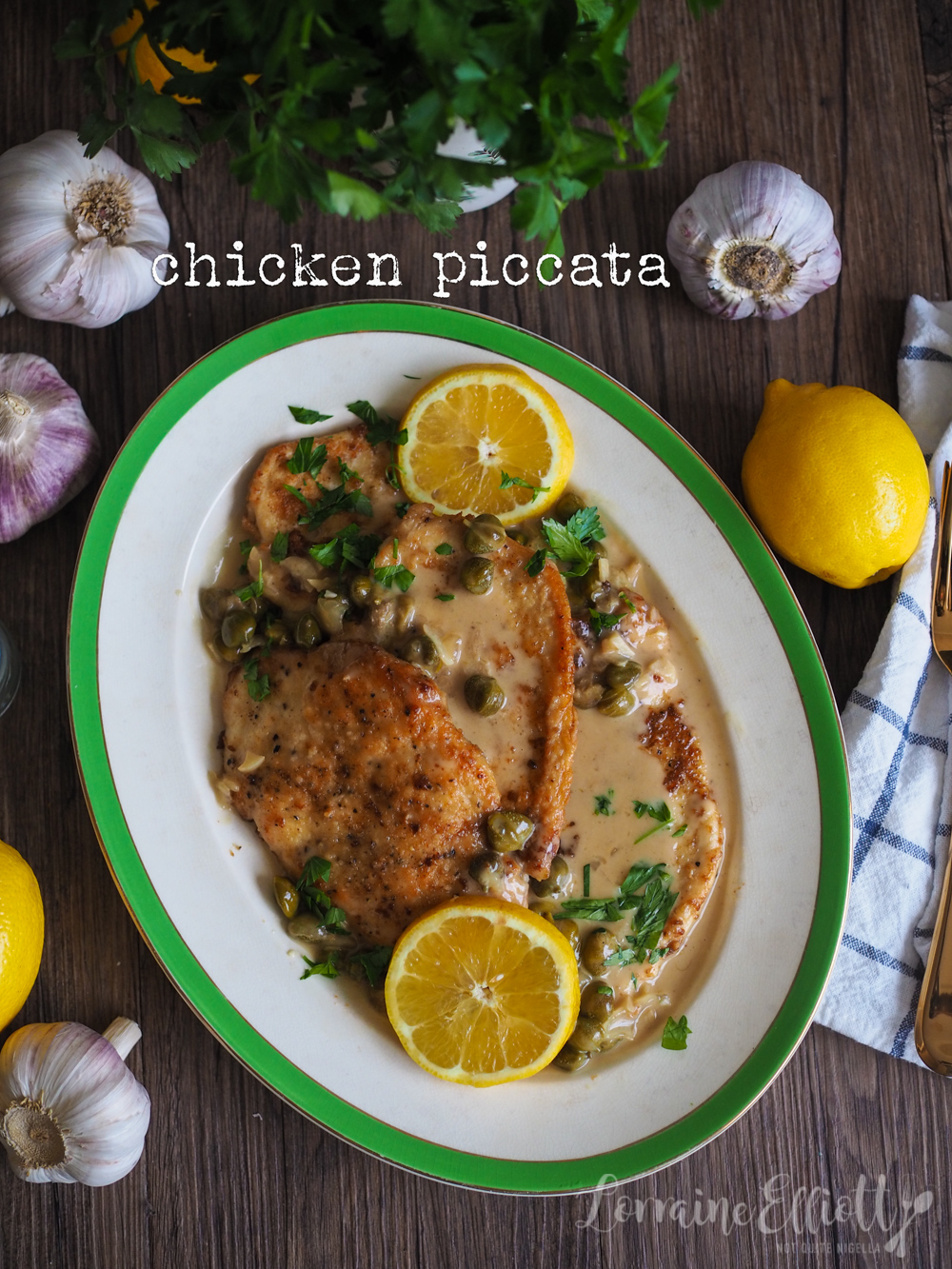 Chicken piccata is a delicious Italian American dish that is based on veal scaloppine. Tender chicken breast fillets are pounded, floured and then pan fried and then a delicious lemon and caper sauce poured on top. It's perfect for a week night dinner but so delicious you'll want to make this every night. This is a pushy recipe Dear Reader!

Chicken piccata is an easy dish that doesn't require a lot of time apart from pounding the chicken breasts. The sauce is very simple: butter, garlic, chicken stock, capers and lemon juice are all you need for the sauce so chances are you have most of these ingredients ready to make the sauce already. I decided to make chicken piccata this week because I had lots of lemons and parsley. I always have capers and this recipe is a great one if you're looking for something amazing but want to rely on what is seasonal and what you may already have in the fridge or freezer. I added some white wine to it as I like the flavour that it adds to a sauce but you can omit this. Or you can also use marsala or brandy for a richer flavour. 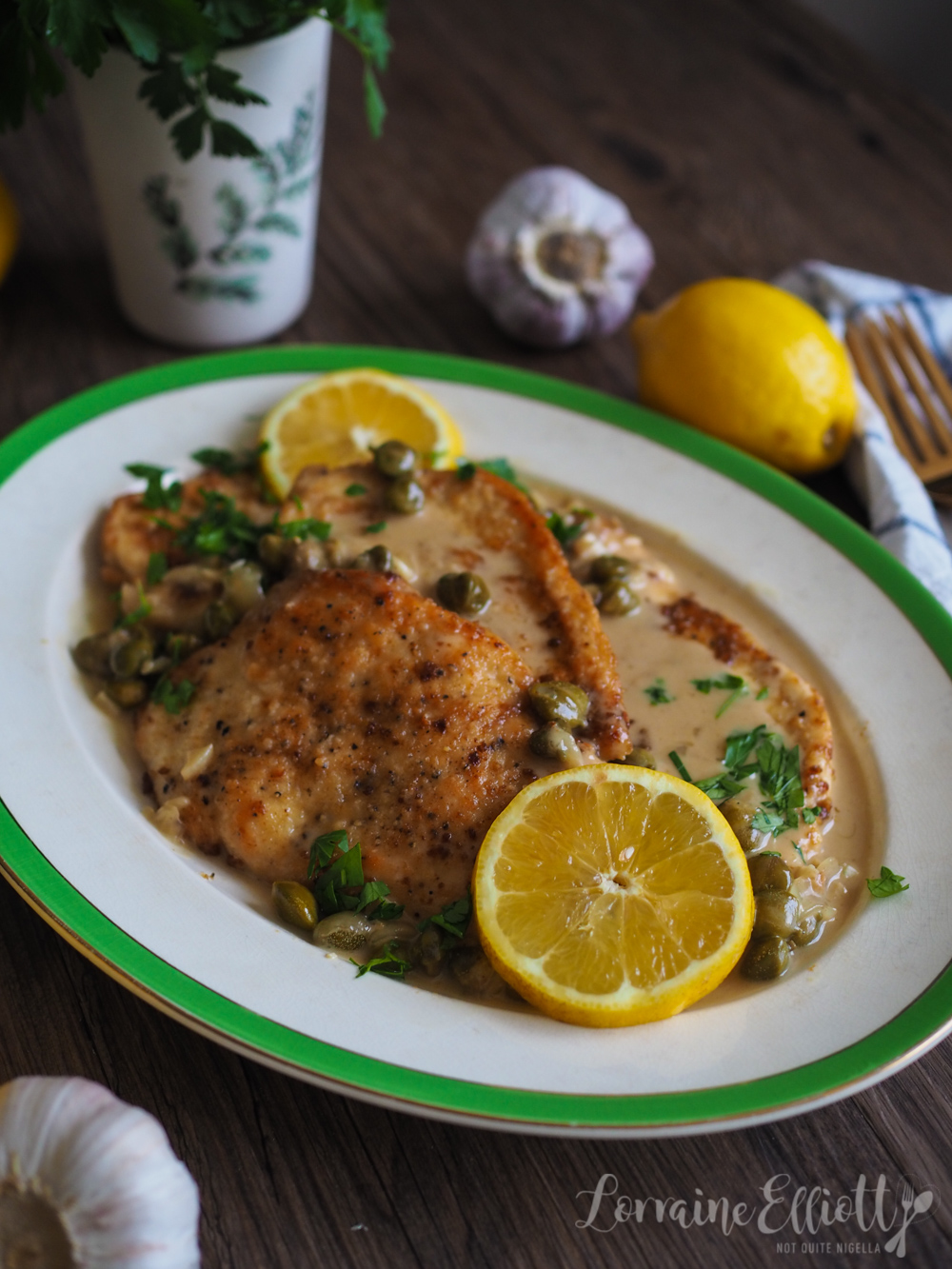 Chicken piccata was first seen in the 1930's in the United States. It was said to be brought there by Italian immigrants who originally used veal as it is similar to veal scaloppine which is pounded thin, floured and pan fried veal fillets. Some chicken piccata sits or is cooked in a thinnish sauce but I prefer my sauce a bit thicker in texture because I like the chicken to retain a bit of the texture from pan frying in it. To make the chicken a bit crispier I add a teaspoon of baking powder which is optional. I also make sure to season the chicken breasts before flouring them because I don't like under-seasoned crumbed food. 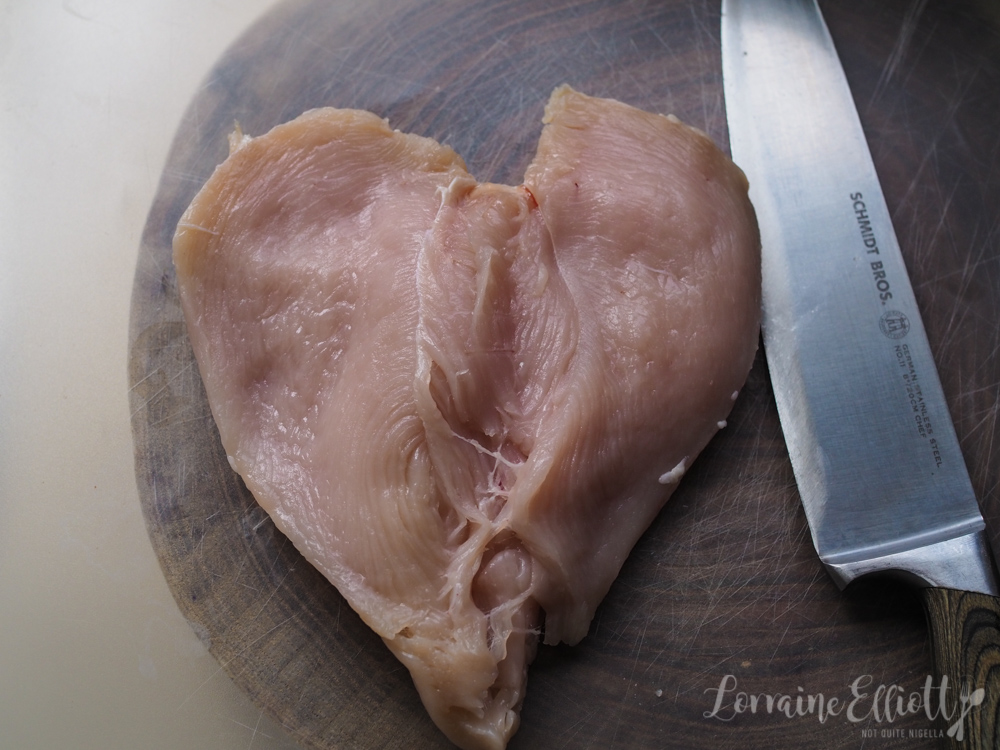 The chicken breasts that I used were quite large at 300g/10.6ozs each and could easily be cut in 2 or 3 slices. To me there wasn't much difference cutting it in two or three although cutting it in half made for a slightly neater looking scaloppine (see pics below). Cream isn't usually added in piccata sauce but I really loved how this made it a bit milder. But if you love flavours like capers and lemons then please omit it. I suggest trying it as is and then adding the cream if you want. 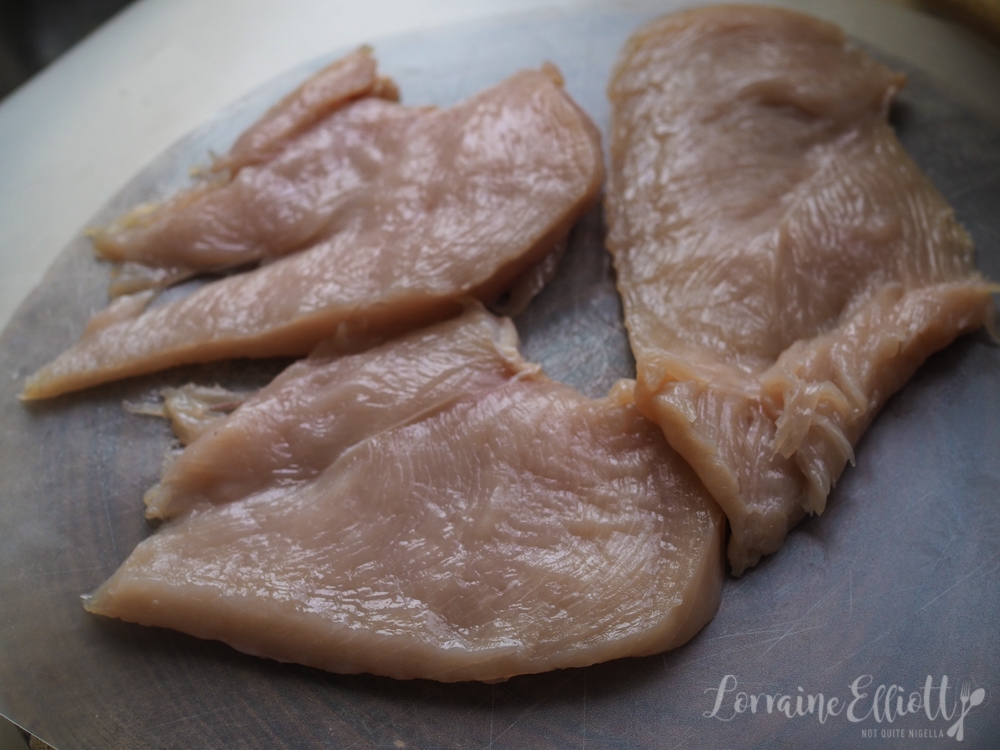 Or cutting into three scaloppines

What to serve with the chicken piccata? Some people serve it with pasta noodles and if you do, I'd double the sauce quantity. I liked it with garlic bread to mop up the sauce and some salad or sauteed greens. 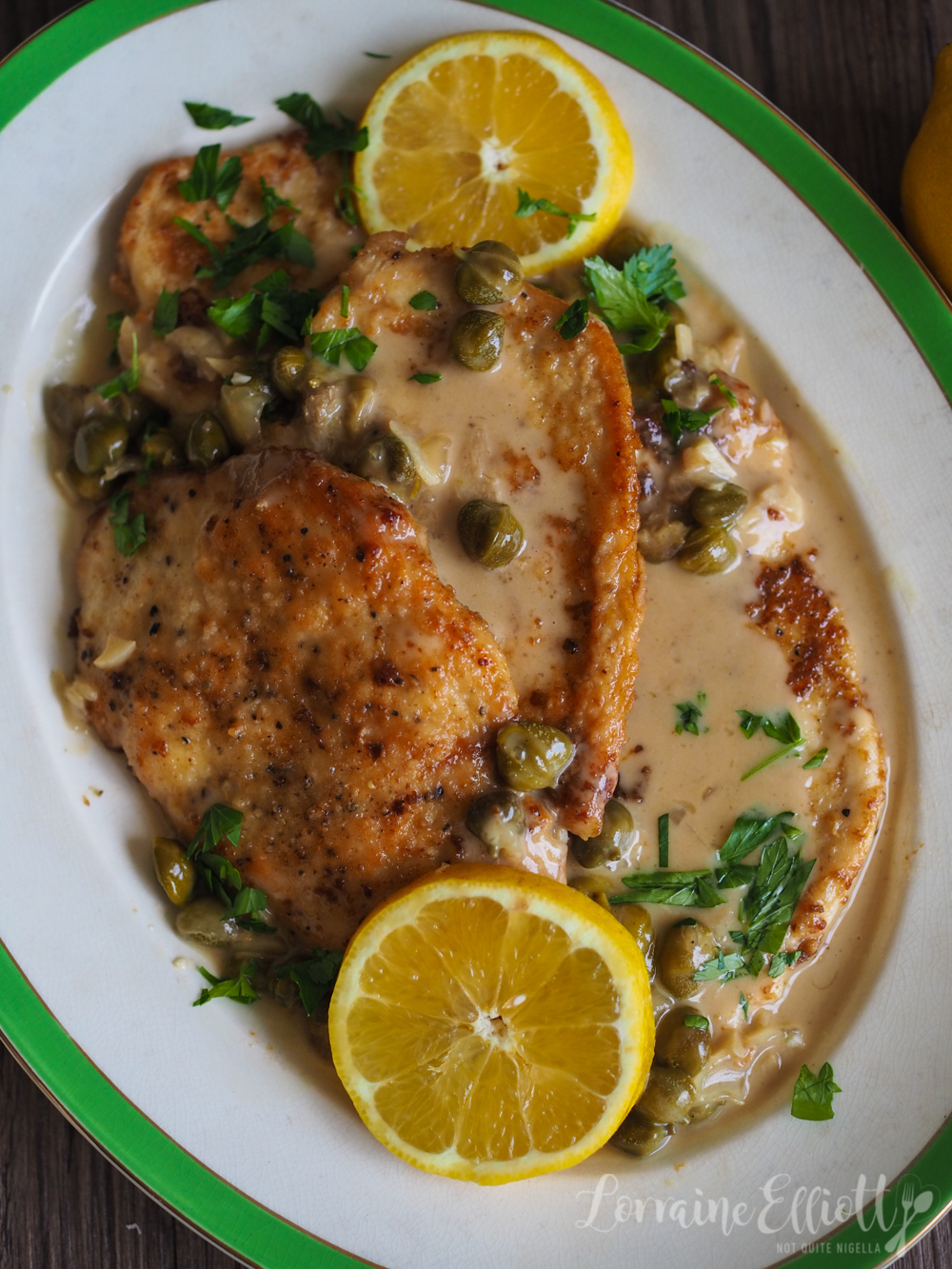 Normally I'd say to serve 2 scaloppines per person unless they happen to have a smaller appetite. One chicken schnitzel is usually one whole chicken breast so two scaloppines but lately Mr NQN has just been having just one piece. You see something unexpected happened.

"I popped a button," said Mr NQN to me the other day.

"You what?" I asked distractedly.

He was looking at my mournfully and was wearing a pair of shorts. The top button was missing and he looked a bit shocked.

It turns out that lockdown has made my normally very lean and tall husband put on some kilos. I only say that it was unexpected because I think as a life-long skinny guy he thought that he was immune to putting on weight. However it was a triple whammy with lockdown, winter food and a 5kms radius that meant that the only place he could windsurf from was Double Bay (which apparently isn't the most ideal location to sail from because there's not enough water). Actually it's more a quadruple whammy as he also has a wife that can't stop cooking food for him or feeding him.

"Maybe you could make my meals smaller?" he suggested. He loves fruit so it was easy to change his desserts to something healthier. I made his breakfast a small glass of fruit salad topped with a bit of yogurt. I made his lunch a vegetable filled sandwich and I made his dinners lighter with only one piece of chicken piccata! And now I don't quite know what to do with all the food I make...

So tell me Dear Reader, have you ever tried chicken piccata? How many pieces do you think you could eat? 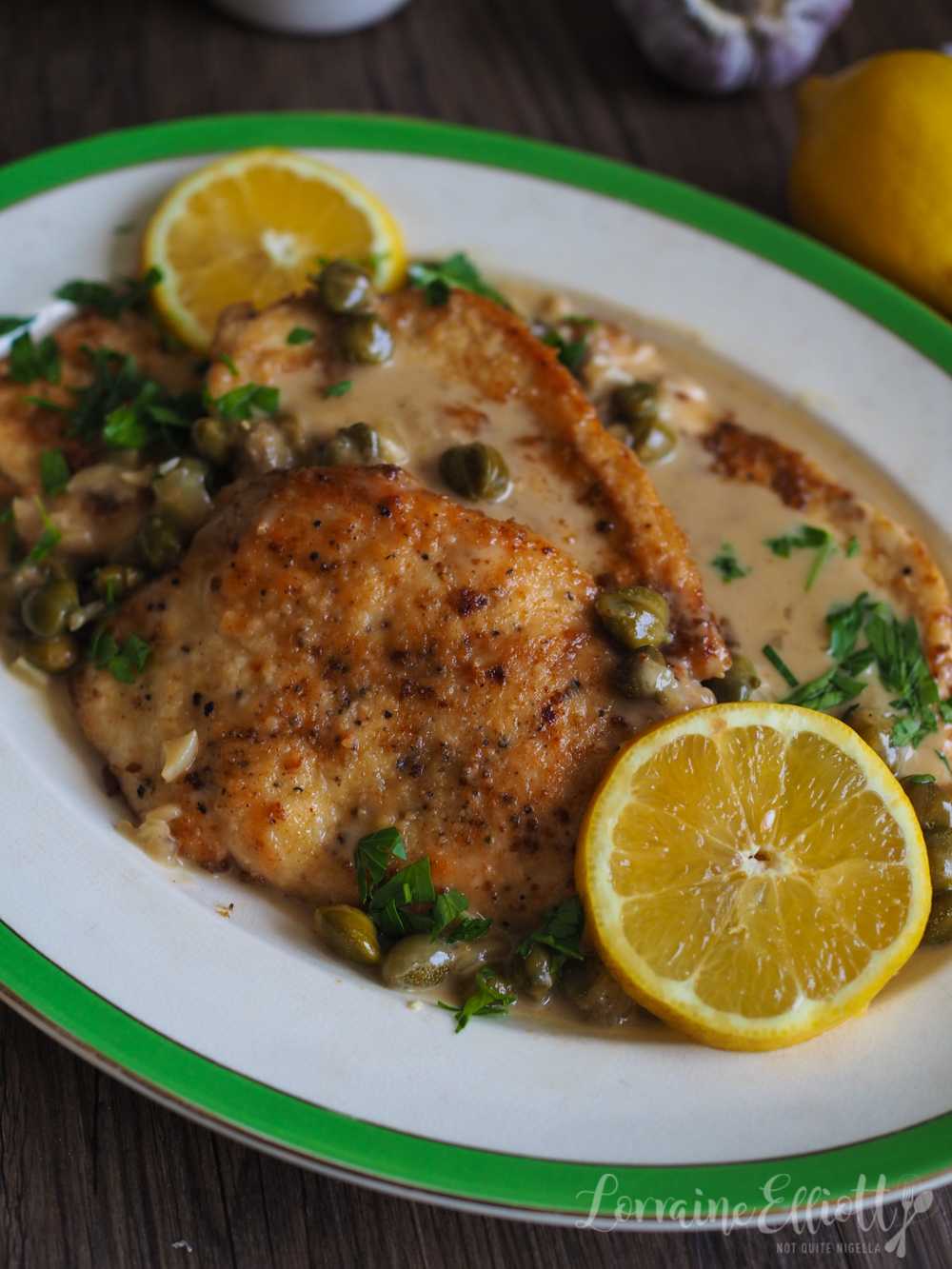 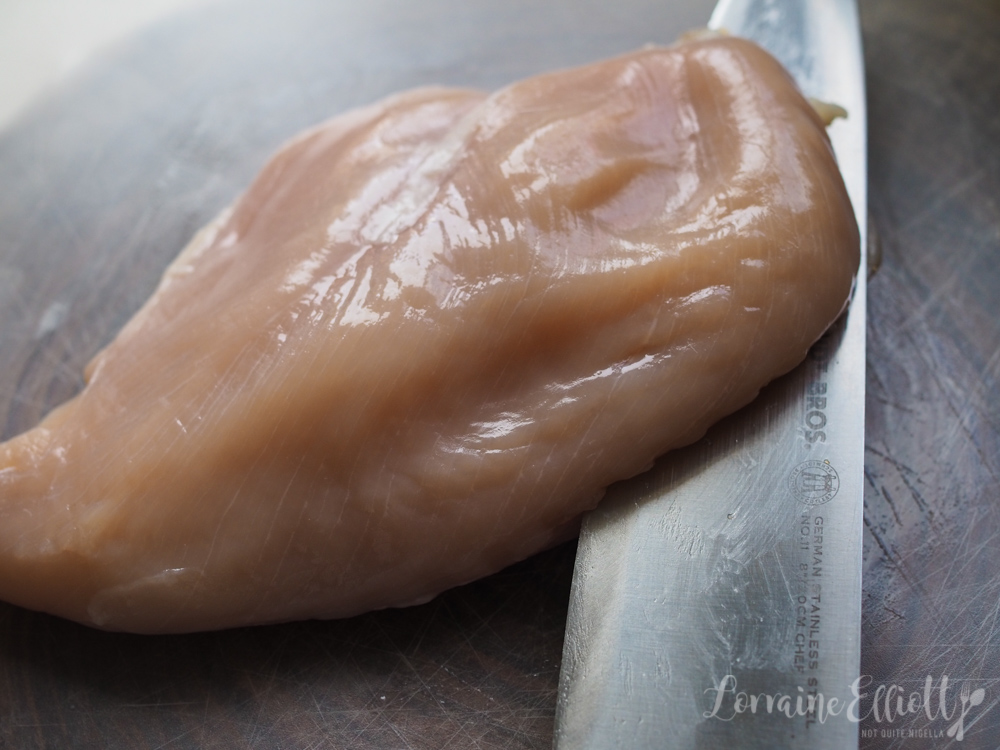 Cutting through the thickest part of the chicken breast 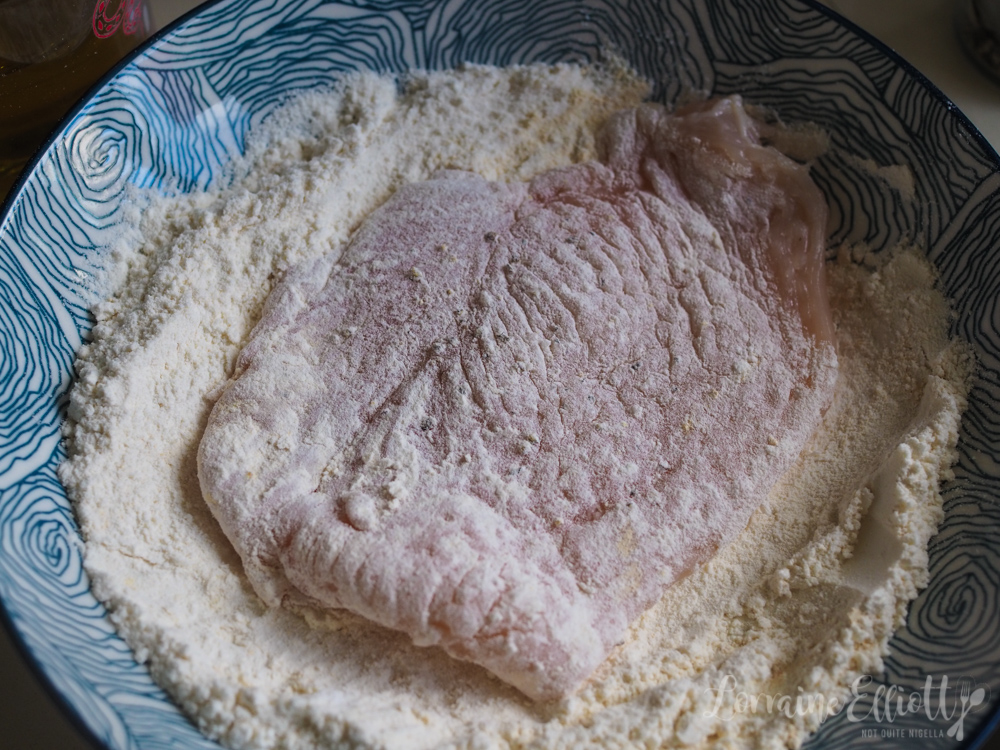 Step 2 - Place the flour, baking powder and garlic powder in a bowl and whisk together. Heat a large frypan on medium high heat and add some oil. Dredge the chicken fillets in the flour mixture and fry the fillets until golden on one side and the side facing up starts to turn white at the edge. Turn over and fry on other side. You want the chicken to be completely cooked through. Add more oil as you need it. Set aside. 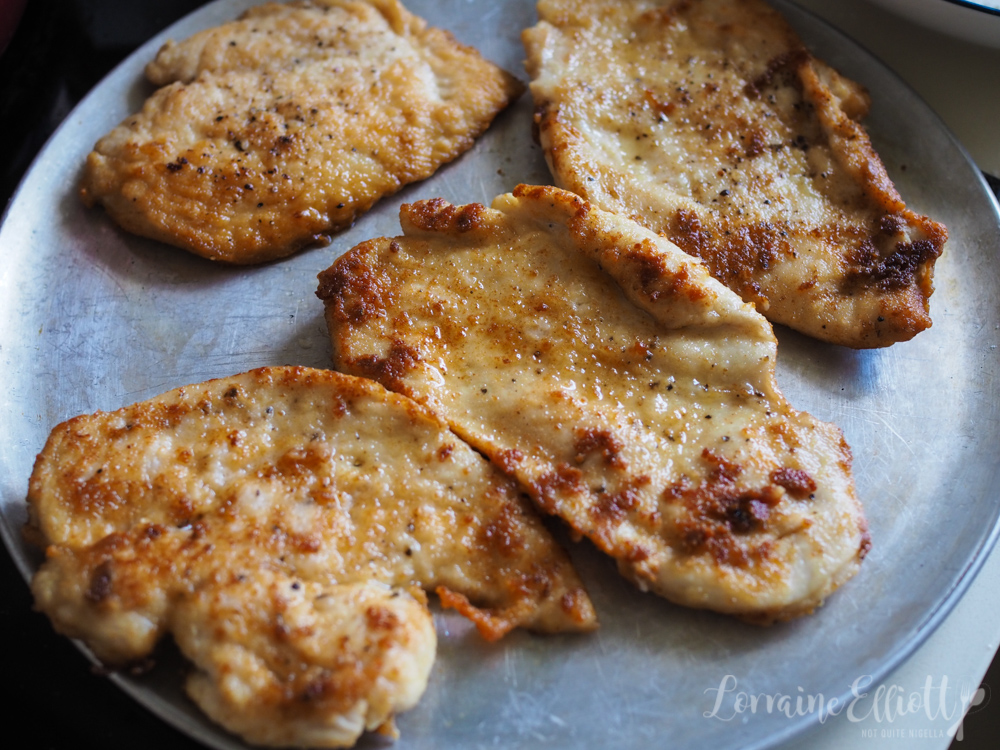 Step 3 - In the same pot (there shouldn't be much oil left in it) add the butter and garlic and cook until it smells nutty and fragrant (like browned butter). Add the chicken stock, white wine, lemon juice and capers and allow to simmer for 5 minutes reducing a little and cooking off the alcohol in the wine. Add cream and heat through. If you want the sauce to be thicker turn heat down to low and add the cornflour slurry and stir to thicken. 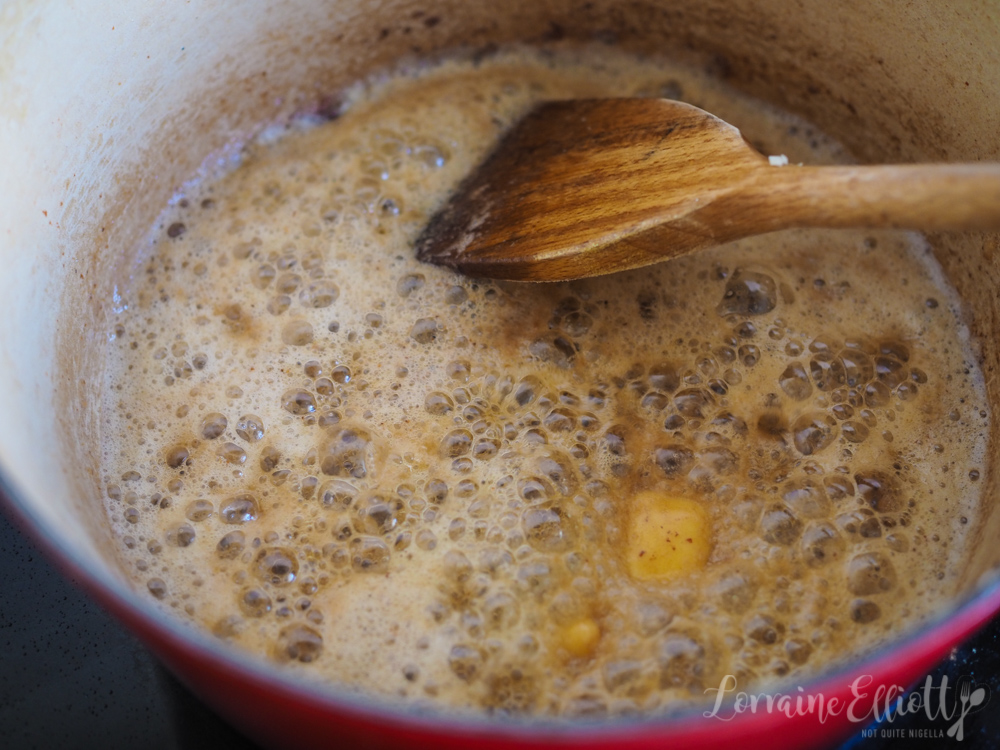 Browning the butter and garlic

Step 4 - Place the chicken fillets on a platter and pour sauce around the chicken-I like to leave some bits uncovered for crispiness. Serve with lemon slices and chopped parsley. 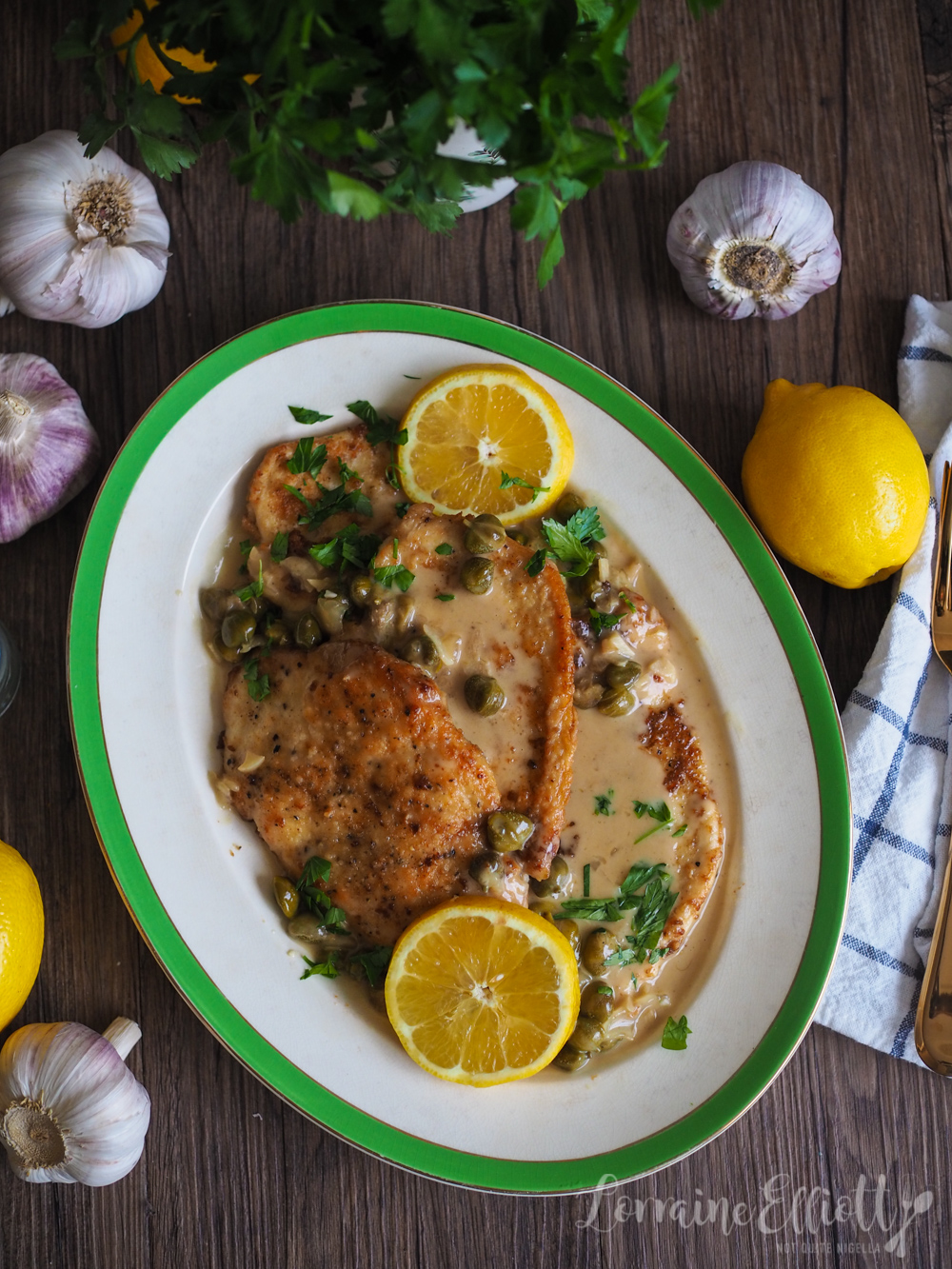