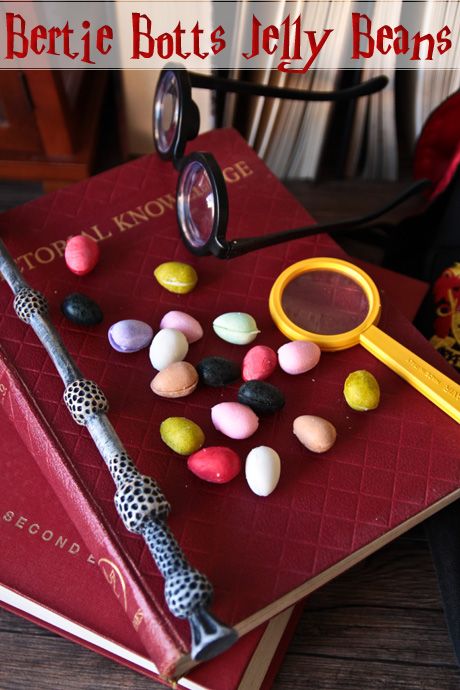 I used to work for a man who didn't mind when I called him Voldemort, Harry Potter's dark lord of evil. That kind of gives you an indication of how strange and twisted he was. Having said that, he wasn't 100% awful, he definitely had moments of being kind and nice but mostly, and until he got married he was a strange tyrant that you could hear demanding things like a petulant baby his loud vice roaring across the room "All I want is...." was a frequent cry.

"Expecto Patronum!" I used to mutter under my breath during this time. Luckily he only had the vaguest understanding of the Harry Potter series. These two words in the book were what Harry or other wizards would say when needed a protector and a weapon against predators and Dementors. I was hoping that the spell would work to appease tyrannical bosses. 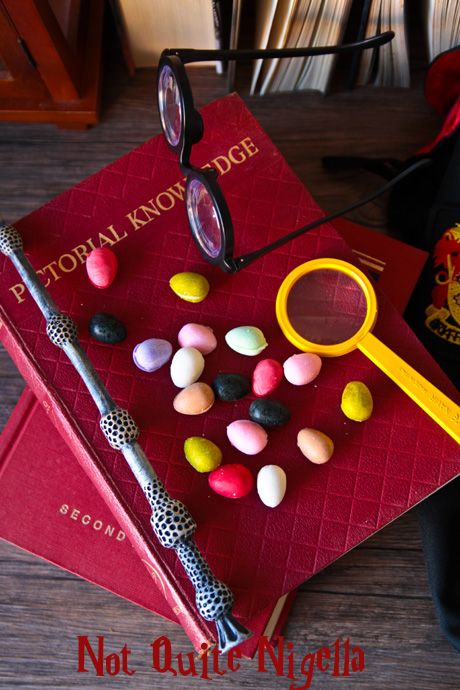 The Harry Potter series is one of my favourite series of books, ever. I'm not much into the fantasy genre but there was something that immediately grabbed me (and millions of others). I love the way the author J.K. Rowling's mind works and how imaginative she is. And like with many of my favourite books there is also an element of food. One of the foods that she created was Bertie Bott's Every Flavour Jelly Beans. These are like muggle or non magical jelly beans except that there is a huge range of flavours good and bad. Alongside more regular flavours there were ones like earwax, bogey, vomit and dirt. As such they were marketed as "Bertie Bott's Every Flavor Beans - A Risk With Every Mouthful!"

And I woke up one day and said out loud in excitement "These would be _perfect _for Halloween!"

I didn't quite have any inclination to replicate a vomit flavoured jelly bean but I decided to make jelly beans in a variety of flavours including some not so nice or non traditional jelly bean flavours mixed in with your regular flavours. Having a look in my spell cupboard... ahem pantry I took out the following flavours: coconut, chocolate, pear, black pepper, lemon myrtle, vindaloo curry, violet and strawberry and paired them with colours. 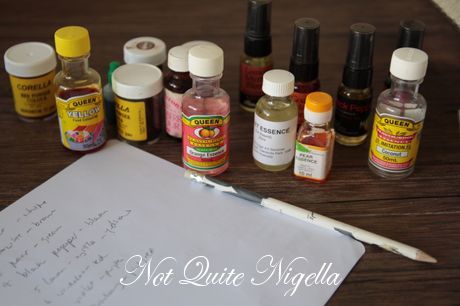 Finding a recipe for jelly beans was hard-very hard indeed. What I realised is that nobody really makes jelly beans because they are easy and cheap to buy. But because I was under the Confundus charm spell I paid no heed of the warning and made a batch without having any molds and they just melded into one and didn't look even vaguely jelly bean shaped. I regrouped and bought some molds that in truth look more like mini Easter egg molds than jelly bean molds although they were sold as the latter, and made them again. The flavour of these jelly beans was  distinct. Clear and quite scary for people picking up a red jelly bean and expecting a hot cinnamon or strawberry jelly bean and instead getting a mouthful of garlickly vindaloo!

I gave these to Mr NQN who was actually quite excited about dressing up for Halloween for a change. Every year he says that he wants to come as Dexter Morgan (that is, the pants and a polo shirt wearing Dexter-not much of a challenge) and we always end up buying a costume at the last minute. This time I bought a Harry Potter robe, a Dumbledore wand and some glasses for him ahead of time. With much excitement the evening that they arrived, he went off practising spells in our lounge room. Then on the night of the Halloween party I gave these to him to carry around to offer to guests-the cheeky monkey emerged and he especially loved offering his sister a jelly bean and seeing her reaction.

Alas it was poor Miss America and Alison whose first two jelly beans were the black pepper and the vindaloo. Being brave souls however they tried other, less unsavoury flavours and got a taste of coconut, chocolate, violet and strawberry. Alison even said that she liked the black pepper one!

So tell me Dear Reader, do you like the Harry Potter series? And would you have made any strange flavours and if so, which ones? 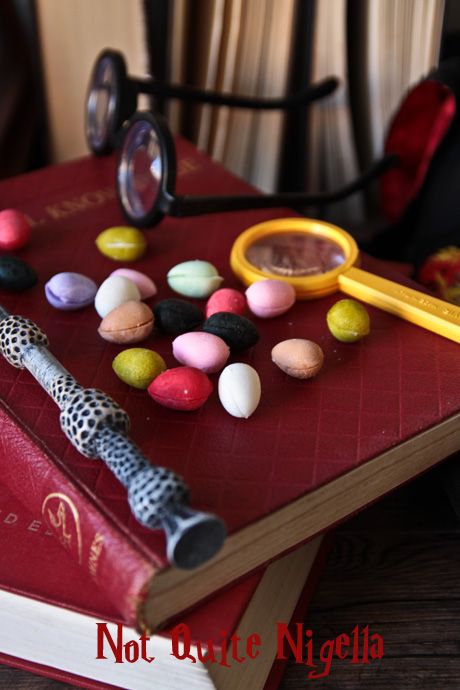 You will also need jelly bean molds, a heavy based large saucepan and a sugar thermometer and as many bowls as you have flavours and small spoons. 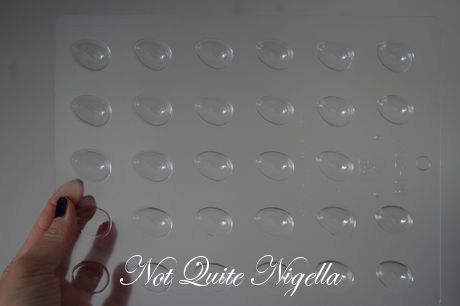 Step 1 - If using gelatine leaves, soak in cold water. If using powdered gelatine, you don't need to do anything else. In the heavy based saucepan add the water first and then the sugar on top and stir gently until sugar is dissolved making sure to brush down any stray sugar crystals on the side with a wet pastry brush (as this will cause your sugar to crystallise). Once the sugar is completely dissolved add the gelatine powder or squeeze out the gelatine leaves from the cold water and add this to the sugar syrup. 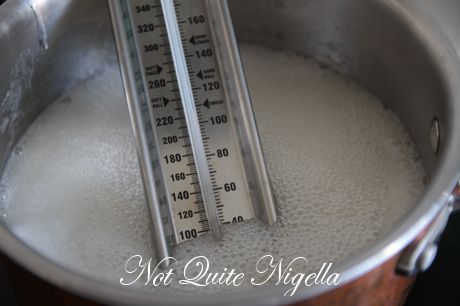 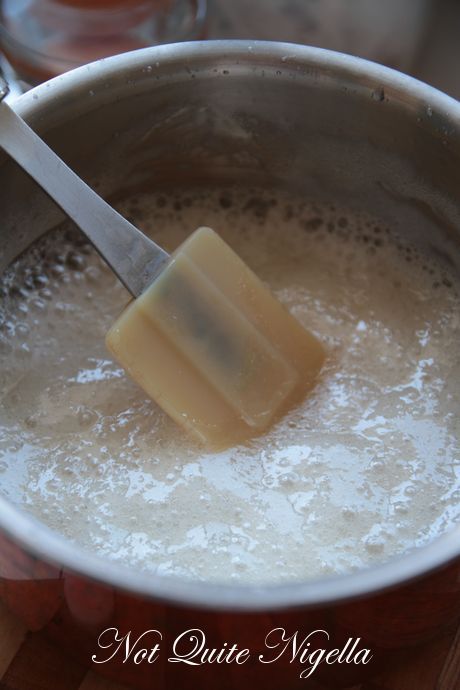 Step 2 - Add the sugar thermometer and bring to a boil until it reaches a soft ball stage of 110C or 230F. It takes about 20 minutes or so to do this and the mixture will swell and recede-be sure never to leave boiling sugar unattended. My pot just fit the mixture and I've made several batches of these and it has not overflowed-yet! ;) 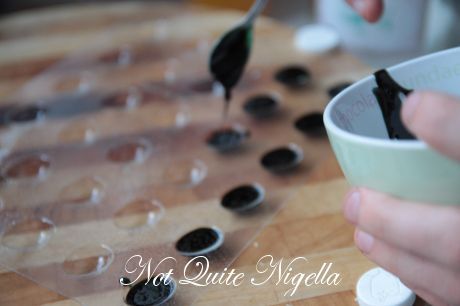 Step 3 - While it is boiling away spray the jelly bean molds liberally with oil spray and get your bowls, spoons and colourings ready and enlist the help of someone else as the key to this step is working quickly as the sugar sets fast. When it reaches the desired temperature divide the mixture into the bowls and flavour them-I made four flavours at a time and flavoured two bowls at a time and left the pot on the stove to keep warm and therefore not set as quickly. Stir them well and vigorously to ensure that the colour and flavour are mixed in and start dropping them into the molds. It sets faster than you would think! 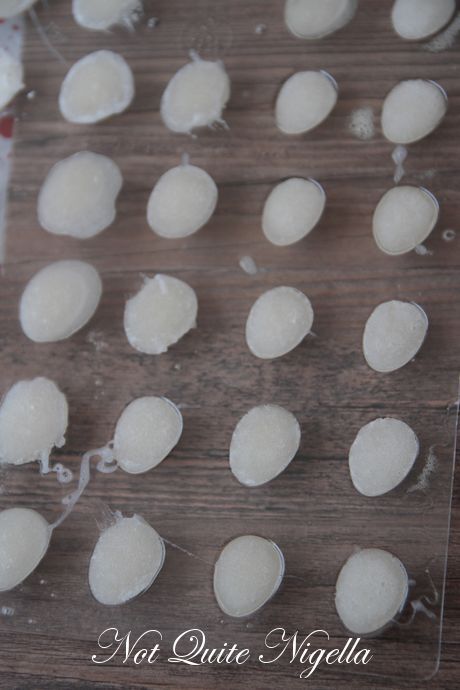 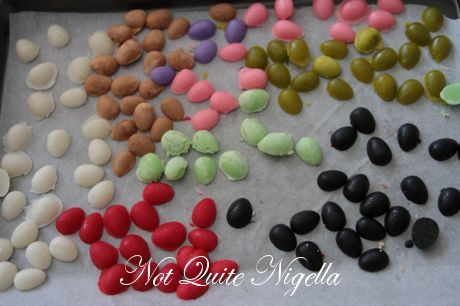 Step 4 - Allow to dry overnight and once they are firm, release them from the molds. Glue halves together with the simple icing mixture. 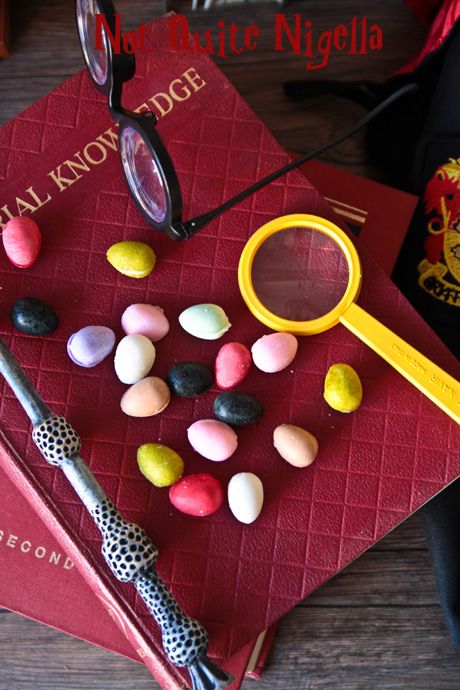