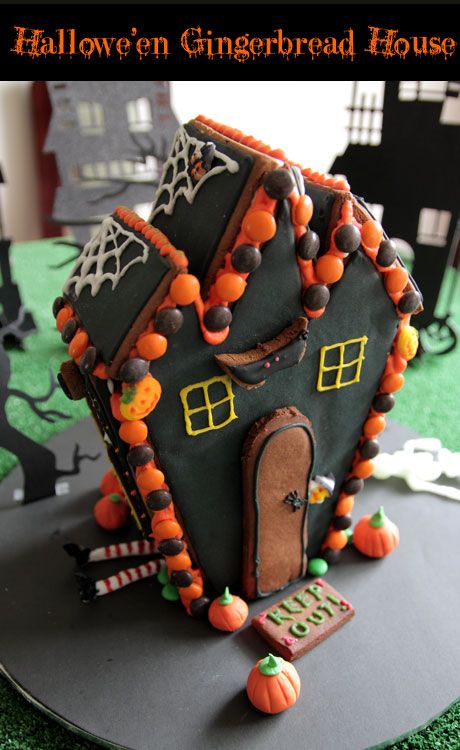 I have to admit that my habits of late are changing. Apart form the occasional movie which I enjoy if it's not too commercial and "Hollywood blockbuster", I watch much more television than I do movies. I think it's because I often find myself disappointed in a movie whereas with  a television show, I know roughly what I am going to get. Mr NQN thinks it's this same creature of habit status that means that OCD trance-like, I repeat songs over and over again and it is why I don't really listen to the radio as I want to know what song will be on next. I hate to think of myself as predictable but then again, all evidence does point to me winning the Miss Predictability award at the pageant. 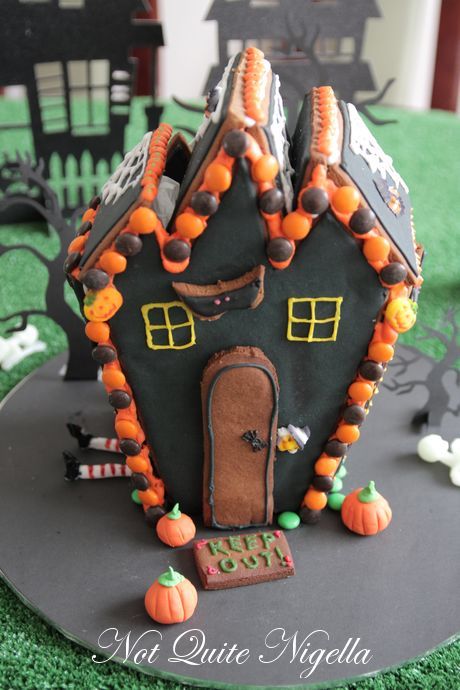 When I do watch a movie, however, it is much more likely to be a movie that I watched when I was younger. I hate to sound like a whiner, but they really don't make movies like they used to. My two favourites when I was young were E.T. and The Wizard of Oz. My favourite part from the Wizard of Oz were the parts with the Wicked Witch of the West. She scared me a little but I did like the music that they played whenever she came on the screen and the fact that she could ride a bike in the sky. As someone that a) cannot ride a bike or b) fly she seemed to be somewhat of a superhero (did I mention I wasn't quite a normal child?). 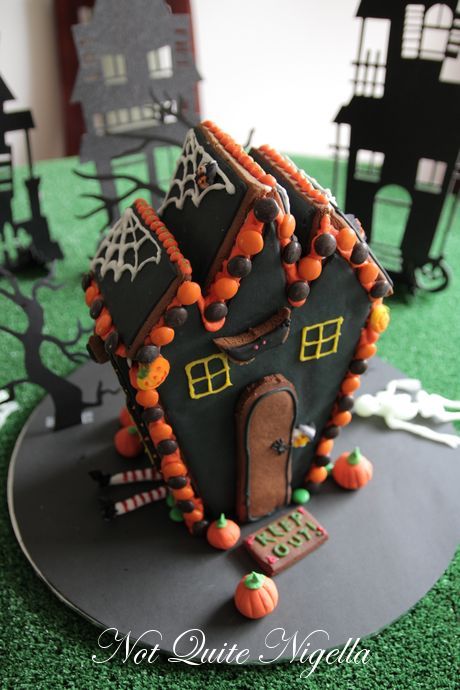 Regular readers will know how much I love Hallowe'en for it allows me to invite goblins, demons and witches into my house. And this year I wanted to make a gingerbread house with a difference. Rather than being nestled in the snow and possibly have Santa Claus as an inhabitant, I wanted the owner to be a witch. I wanted there to be cobwebs, spiders and pumpkins and I also wanted it to be dark as the night as would befit a witch. 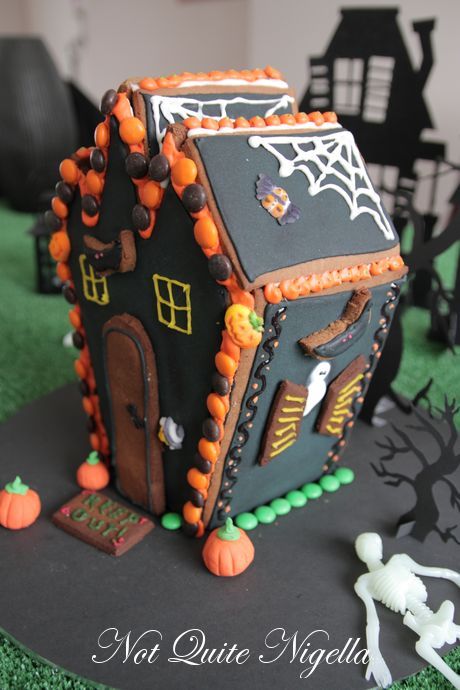 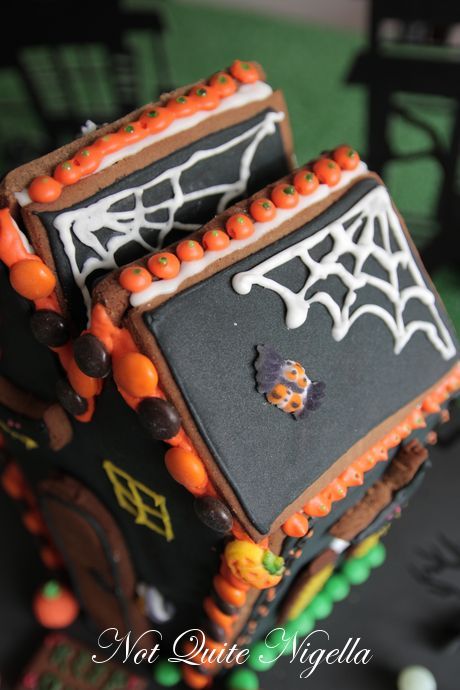 I won't lie, it did take me ages to make but I always feel an odd sense of satisfaction when making a gingerbread house-it's like a miniature version of building your own house. I also wanted to pay a little homage to the Wizard of Oz-can you see where that is Dear Reader? ;) 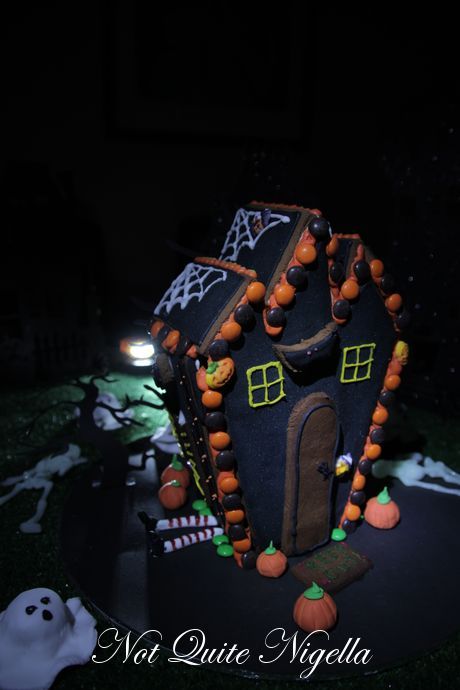 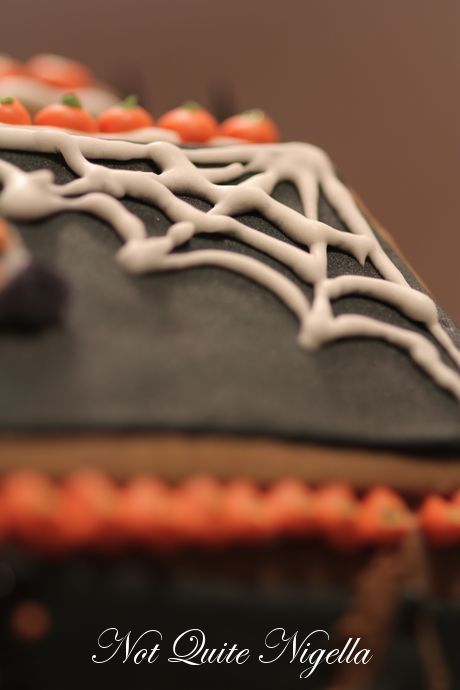 This is also my entry for my friend Faith's and Nutmeg Nanny's All Through the Year Cheer Hallowe'en Event!

So tell me Dear Reader, are you afraid of ghosts? 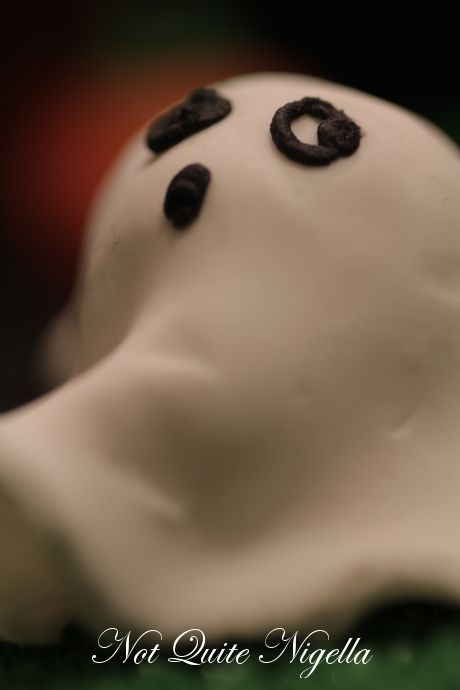 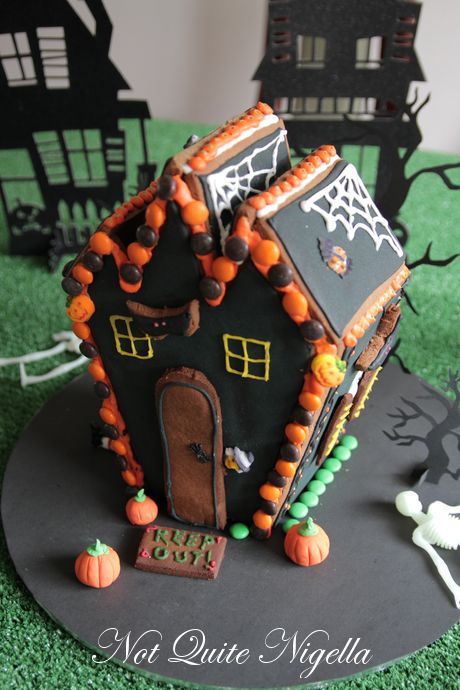 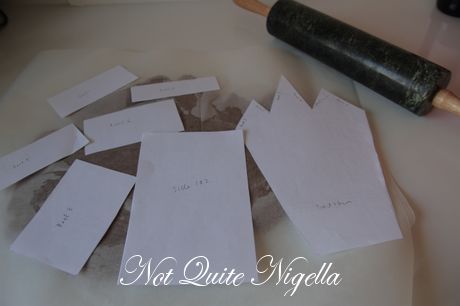 Step 1 - Line 3 or 4 baking trays with baking paper. Have your house template ready. I also made an extra door, shutters and a door mat. I just measured one up on paper although if you're smarter than I am, and I hope you are, you may have printed one out from the internet or bought a set. It is around Christmas time and there should be gingerbread houses a plenty. 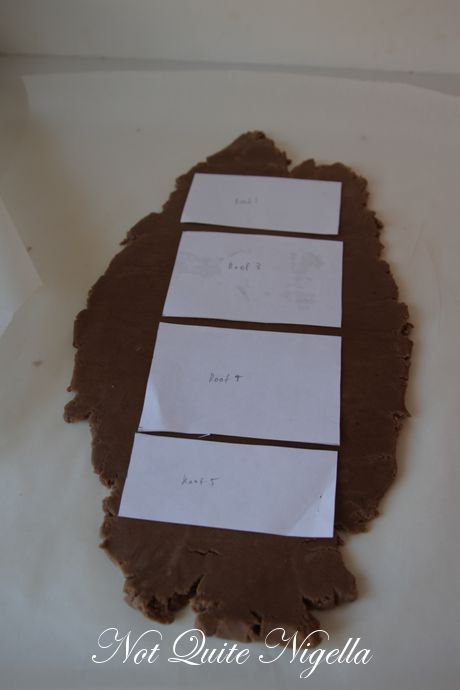 Step 2 - Use an electric beater to beat the butter and sugar in a bowl until pale and creamy. Add the golden syrup and egg yolk and beat until combined. Stir in the flour, ginger, mixed spice and bicarbonate of soda. Turn onto a lightly floured surface and knead until smooth. Press dough into a disc. Cover with plastic wrap and place in the fridge for 30 minutes to rest. 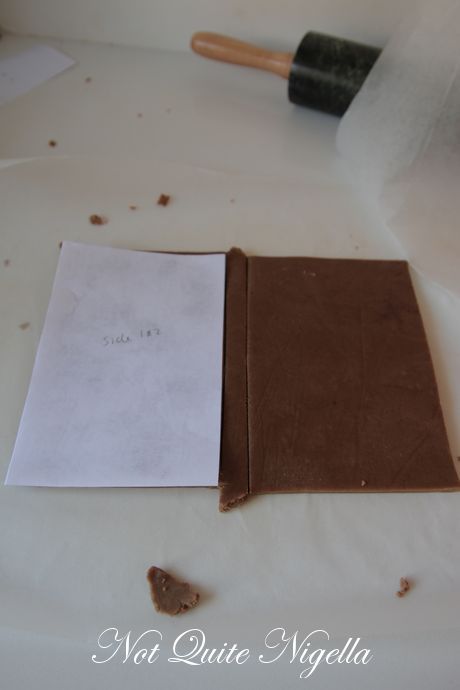 Step 3 - Meanwhile, place egg whites and lemon juice in a clean, dry bowl. Use an electric beater to beat until combined. Gradually add icing sugar and beat. You want the icing at this stage to be able to hold a line as you will start off drawing an outline in this stiffer icing (I'll just call this stiff icing) and then filling it in with slightly more liquidey icing which you make simply by adding water to the royal icing later. Divide icing into separate bowls depending on the desired number of icing colours you want including one white for the cobwebs-you'll use most of the royal icing on the black outside. Set aside. I find that when I make black royal icing using powder, it's best to let that icing sit overnight and re mix it again as it can get little green specks otherwise.

Step 4 - Preheat oven to 180°C. Place the dough between 2 sheets of baking paper and roll out until about 4mm thick. Use cutters to to cut out shapes. Place on trays about 3cm apart. Repeat with any excess dough. This dough re-rolls very well. 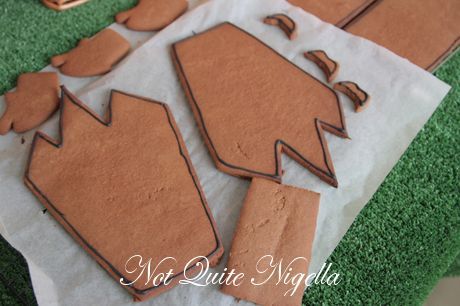 Step 5 - Bake in oven for 10 minutes or until brown. Remove from oven. Transfer to a rack to cool completely. 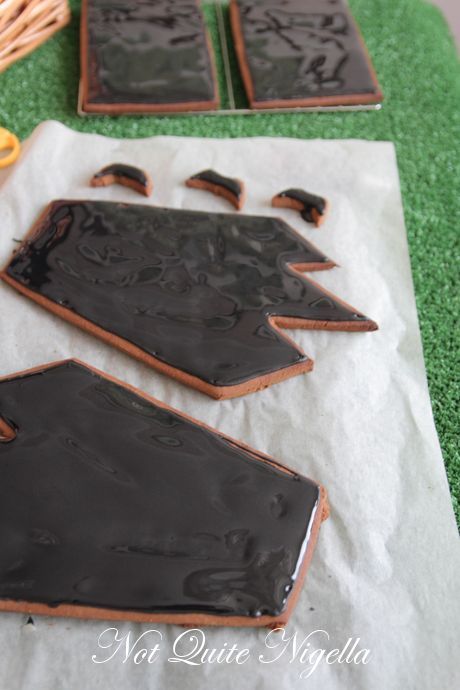 Step 6 - Place some of the prepared icing in small plastic bags (about a quarter to a third). Cut a small hole in a corner of each bag. Pipe an outline around the pieces of the house. Allow to set for 30 minutes or so. Then add a few drops of water to the royal icing and mix well and using a small spoon, fill in the outline around the cookie. Allow to dry completely and resist the urge to touch it as it will spoil the smooth finish. Trust me, I've left so many fingerprints behind. 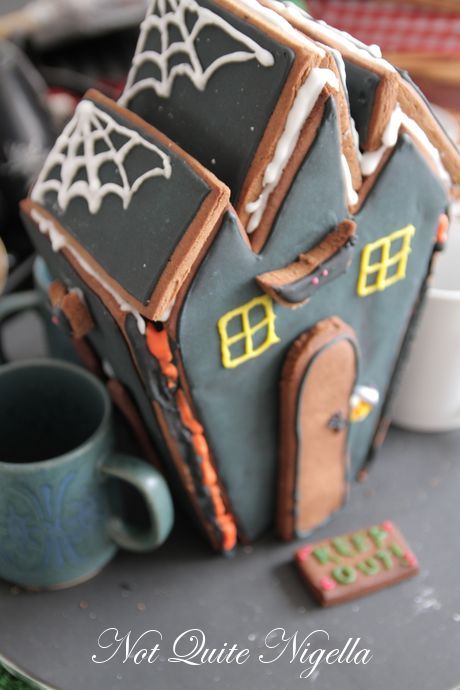 Step 7 - Once dried, it is ready to assemble using the stiff royal icing as glue. Get a cardboard round and cover it with black cardboard and adhere it securely. Take some cups as you will use them to support the house while the royal icing sets. Take the first piece and add royal icing on the bottom and place it on the spot where you want it to sit on the  cardboard. Use two cups on either side to hold it up. Then using the royal icing glue the sides to the front and back of the house. Use extra royal icing if it feel tenuous. You can always cover it up with some piping later. Leave to set overnight. Then add roof and allow to set. 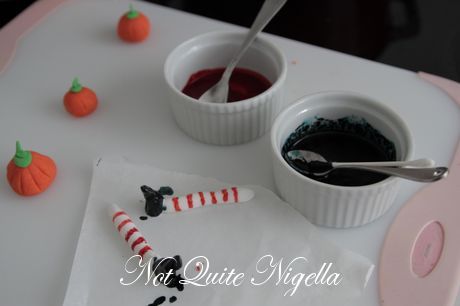 Step 8 - Then comes the fun bit-the decorating! Pipe some stiff orange royal icing to cover up the joins and add m&ms. Then draw "Keep Out" on the doormat. Draw windows using a yellow pen. Draw cobwebs using the stiff white royal icing. Draw slats on the shutter and draw a ghost in each window. 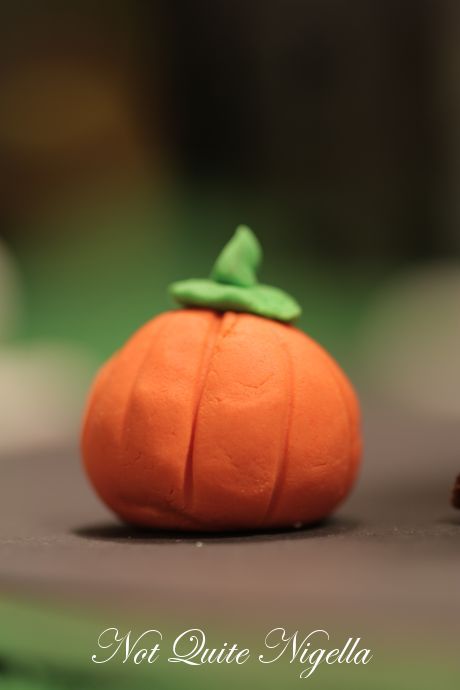 Step 9 - To make fondant pumpkins, shape the orange fondant into small balls and using a skewer, draw lines down the pumpkin. Then top with a little green fondant. To make witch's legs roll out small sausage shapes (always start with a ball shape when using fondant) and then draw them in with an edible red pen. Affix all pieces with royal icing. 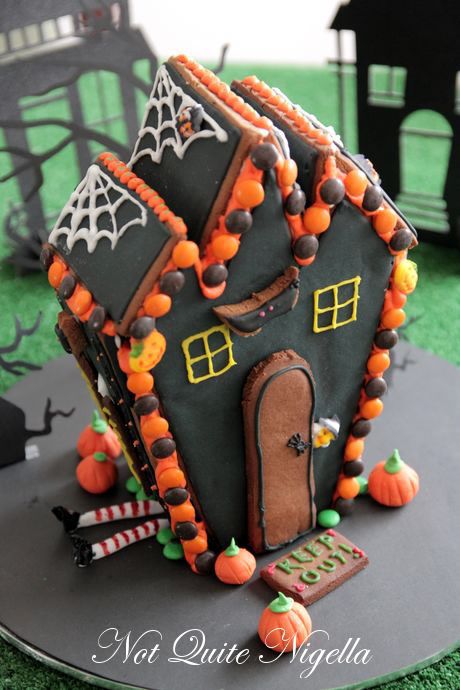