Born To Be Wild Werewolf Cupcakes! 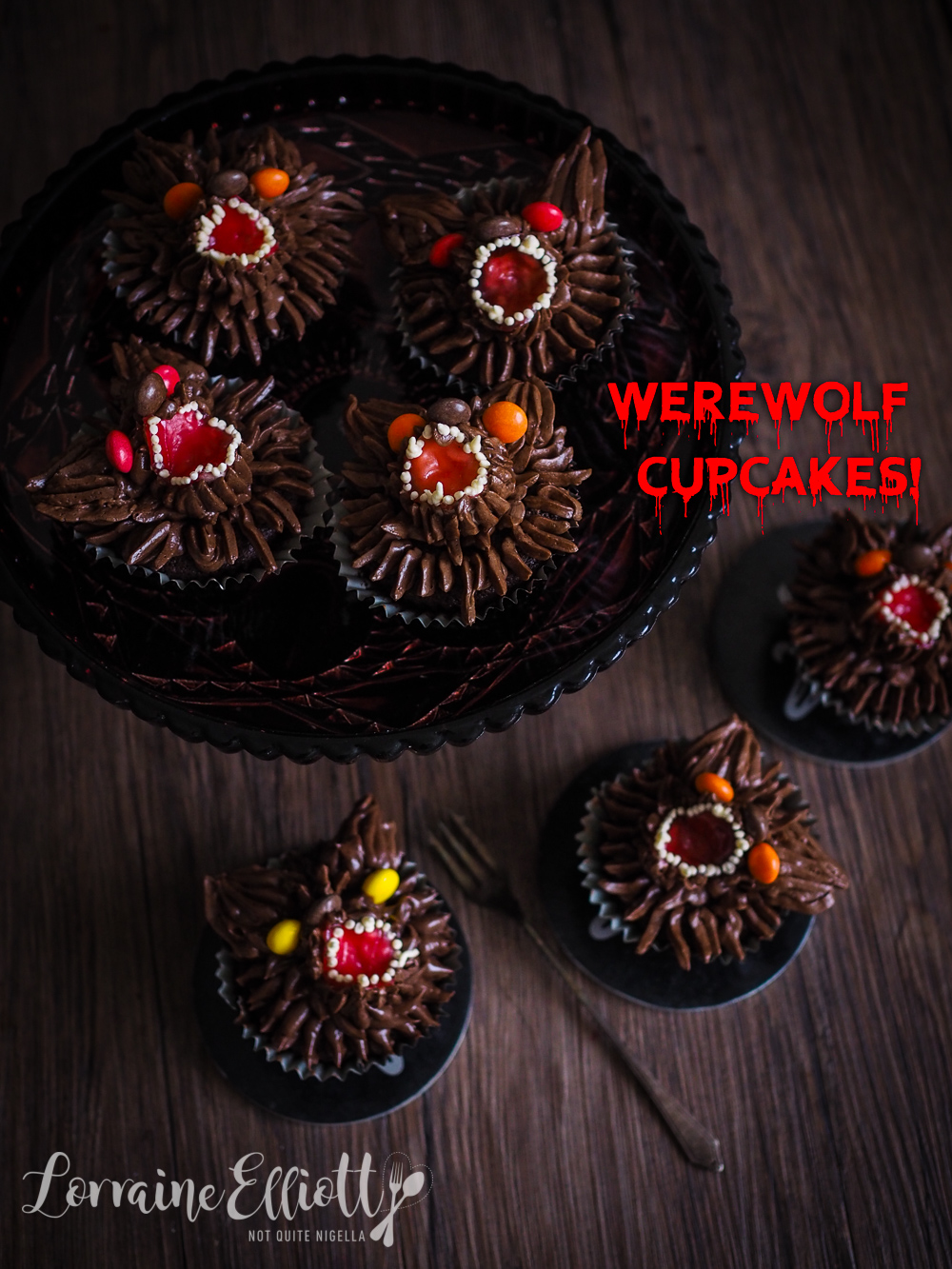 Looking for a scary idea for Halloween that is effective as it is tasty? These werewolf cupcakes were born to be wild! With a chocolate studded cupcake base and a silky buttercream frosting the werewolf features are shaped with marshmallows, fruit leather and m&ms and are entirely edible!

The idea from these came from one of the most fun cupcake books Hello Cupcake although Zombie Cupcakes is my absolute favourite cupcake cookbook. Their version uses pre bought chocolate and vanilla frosting which you can of course use if you don't have the time or inclination to make frosting from scratch. But I like using this silky buttercream because it is easier on the hands to pipe so you don't end up with hideous hand cramps by the end of making 15 cupcakes. 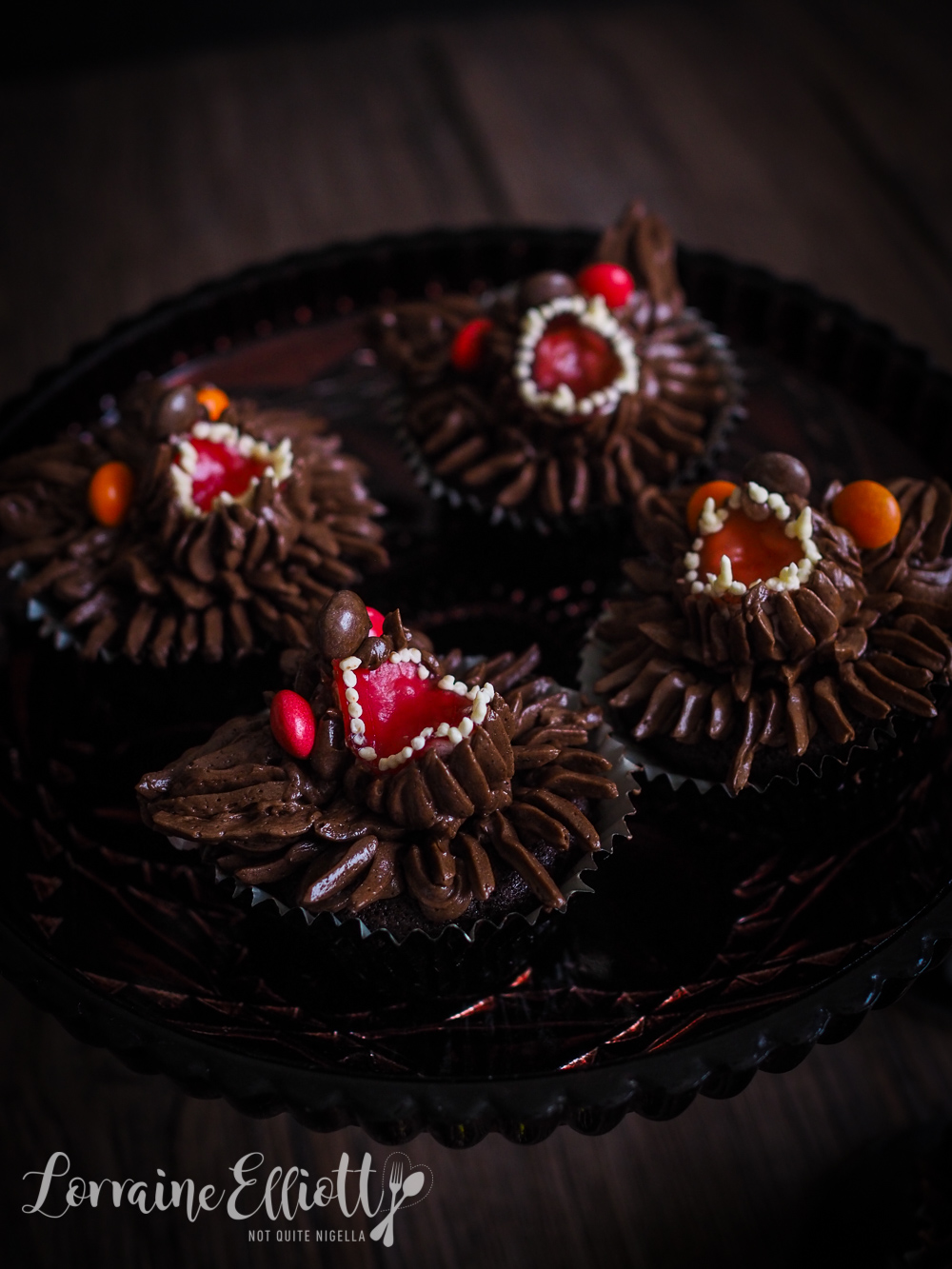 Are we still making cupcakes today? I feel like the answer is yes although it has been a while since I made a batch. But for a Halloween party where they are already portioned up, cupcakes are perfect.

I'm counting down the days until my party. It's getting weird here at Chez Elliott with a whole bunch of oddities like human teeth lying around the apartment (I promise there is a method to this particular madness). And then I woke up the other day with a most interesting message. An Instagram follower @tcb87 messaged me to let me know that Ryan Phillippe (yes the actor) had put my creepy face pie on his Instagram stories!

Alas there was no credit but I was still excited to see my creepy face pie up there in lights (so to speak). And I have to say that all of your reactions to my creepy creations are so lovely. 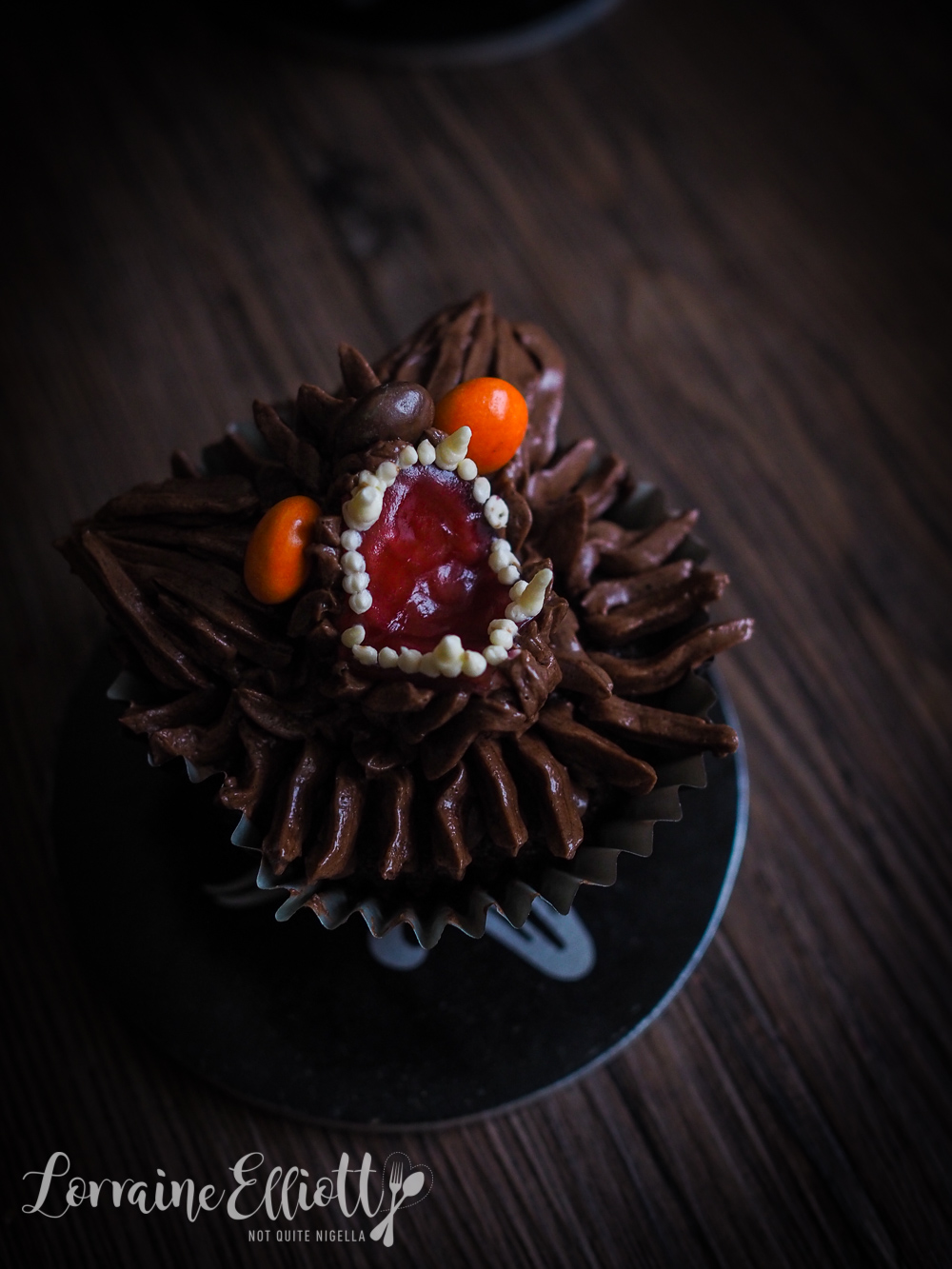 I really do appreciate how you understand how much this holiday means to me and that you weren't negative about the strange things that I make even if you aren't into Halloween yourself. In fact the only negative reaction was actually from a friend Girl Next Door who answered with a single "NOPE!" which made me realise that she was not as exciting or interesting as I thought she was!

So tell me Dear Reader, are you still making cupcake? And have you had any little brushes with famous people (this is albeit a very, very little brush) like this? 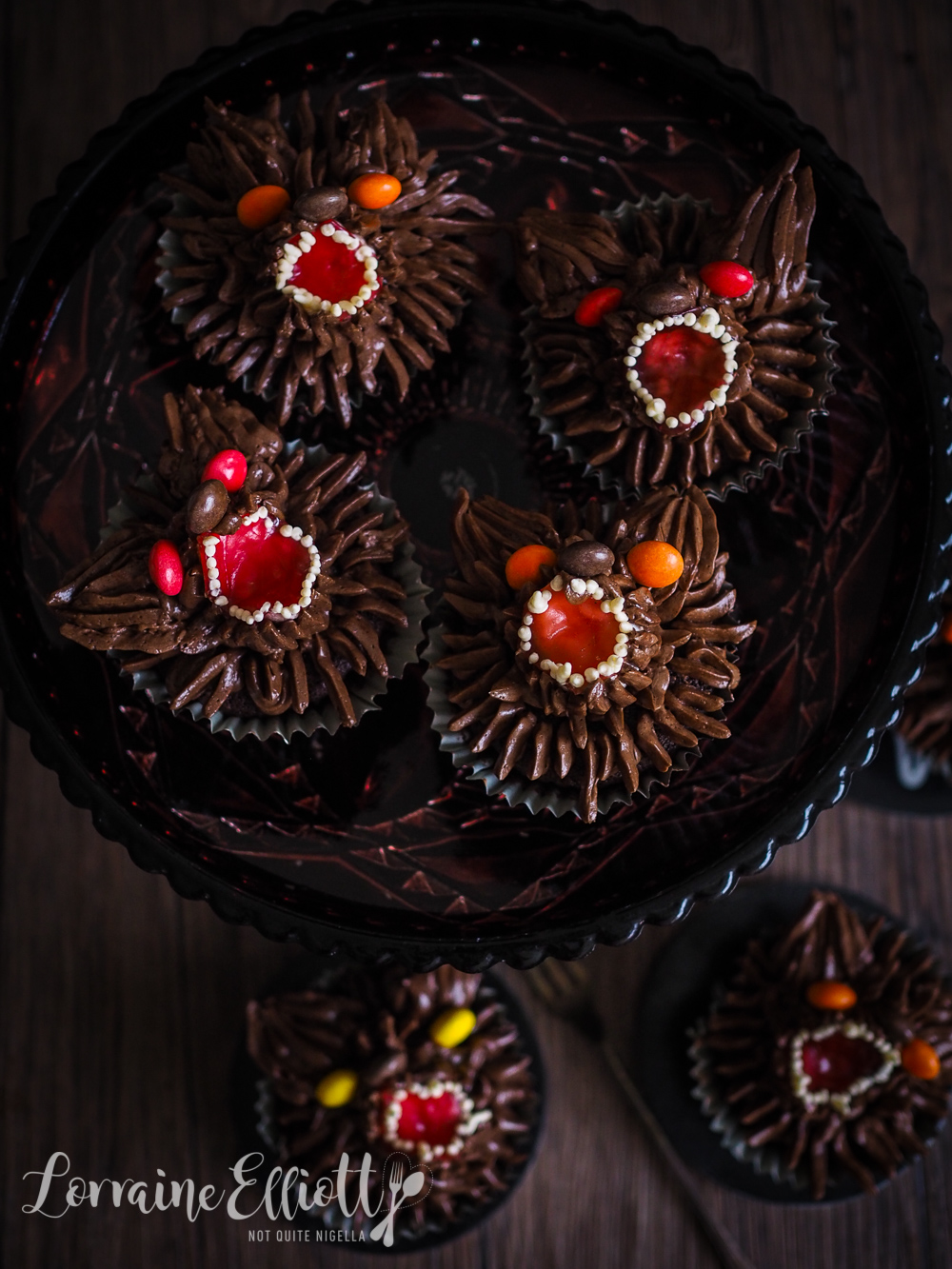 For buttercream (can you vegan spread if desired)

Step 1 - Make the cupcakes first. Line muffin trays with 15 cupcake cases and preheat oven to 180C/350F. In a large bowl whisk the flour, brown sugar, cocoa, bicarb and salt until mixed well. In a jug measure the water, oil, vinegar and vanilla and whisk to combine. Add the wet ingredients to the dry mixture along with the chocolate and stir with a spatula until just combined. 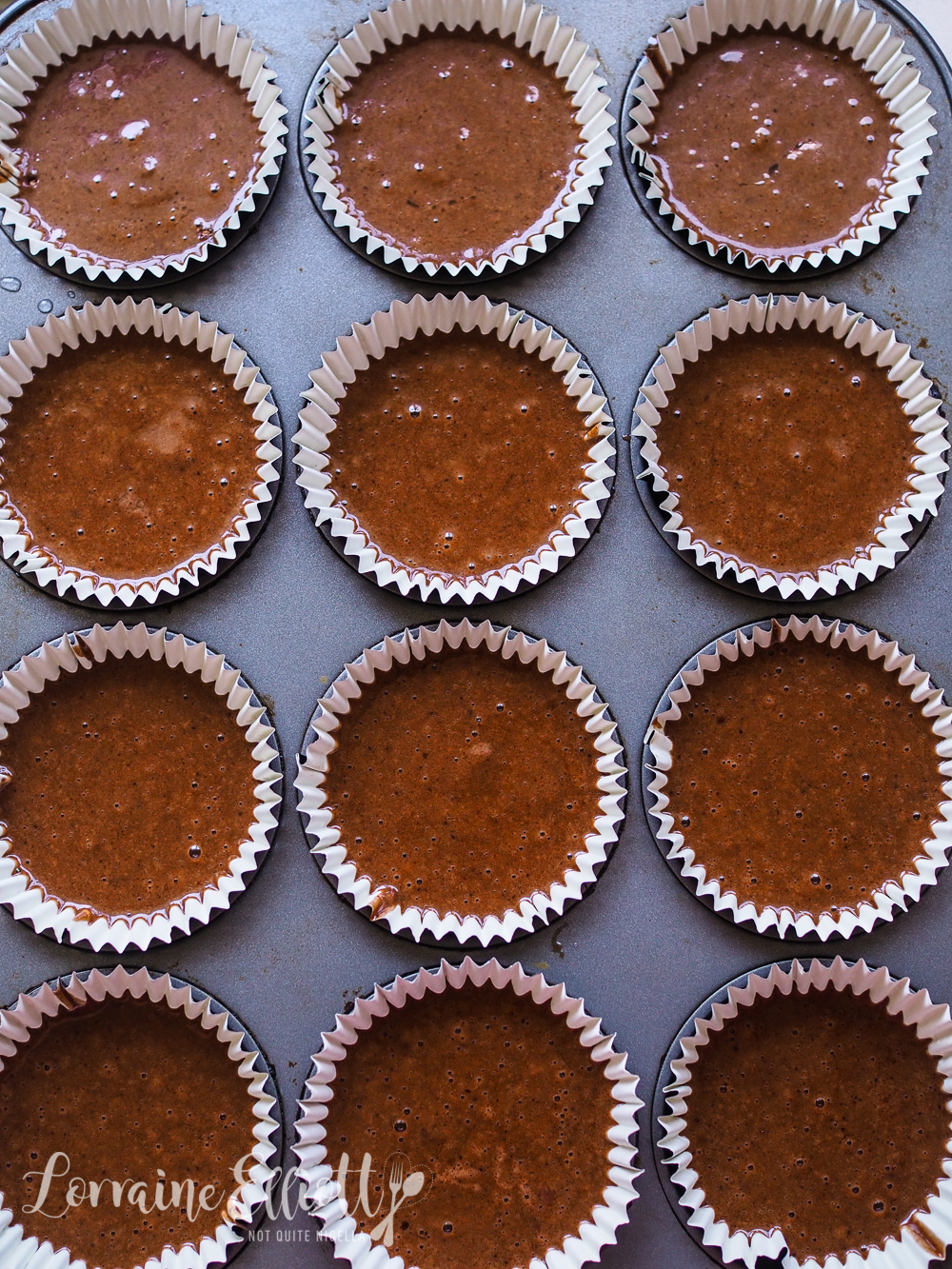 Step 2 - Pour into a measuring jug (same one you used before is fine) and then pour into the cupcake liners 3/4 of the way up. They will rise a little but not an enormous amount. Bake for 20-25 minutes or until the centre springs back when touched. Cool completely.

Step 3 - Make the buttercream. Fit a mixer with a beater attachment and beat the butter on a low speed (3 out of 10 where 10 is the fastest) until smooth. Add the sugar and water on low speed until combined then increase to 3 out of 10 and beat for 8-10 minutes or until you can't feel the sugar between your fingers. Set aside a couple of tablespoons of the white buttercream. Then add the cocoa powder mixture and black food colouring until you get a brown colour. 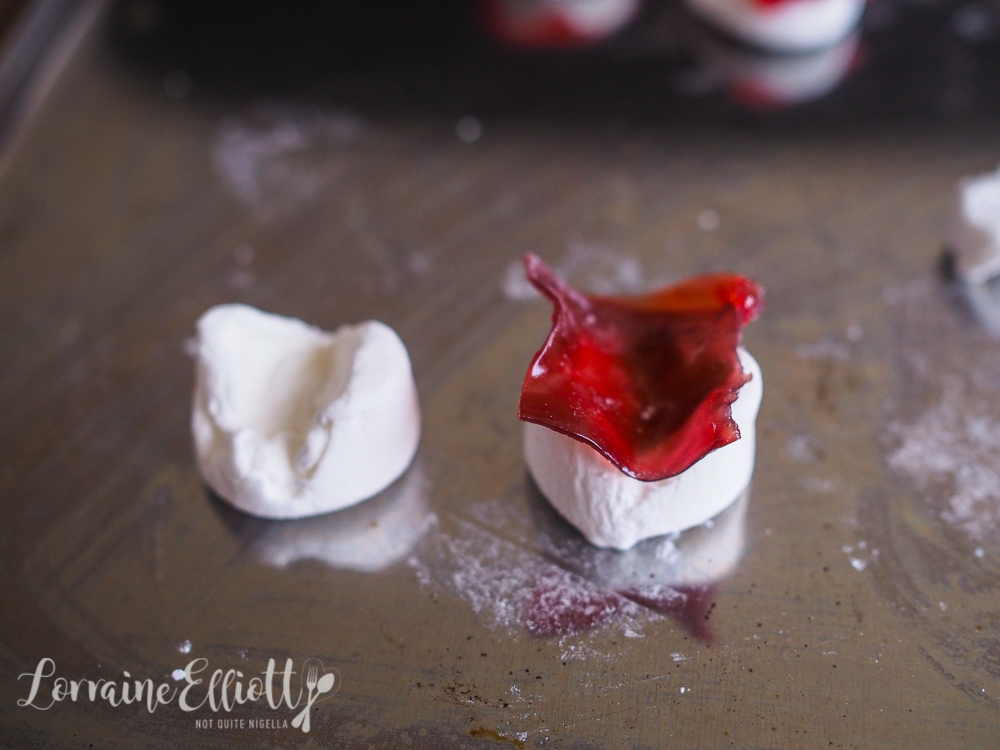 Step 4 - Take a marshmallow and cut a v into it (as shown). Place a square of red fruit leather on top (this is the inside of the mouth). Repeat for 14 more marshmallows. Then cut out 15 sets of pointy ears using the marshmallows. 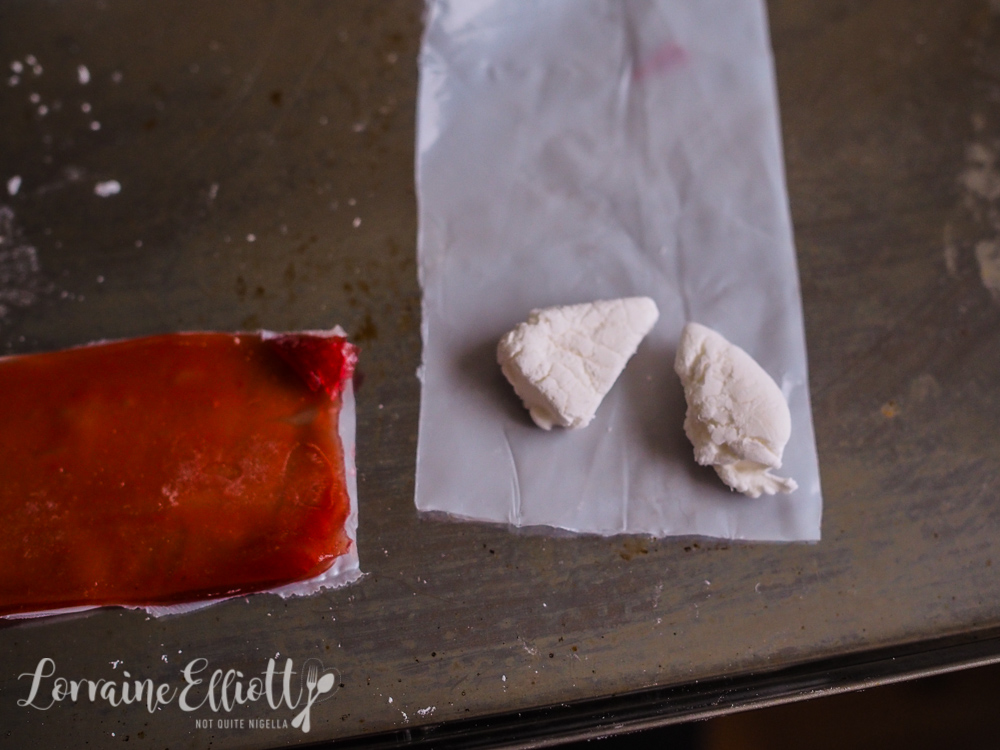 Step 5 - Fit a piping bag with a #352 tip and fill with some of the brown buttercream. Pipe lines around the cupcake and then flip the piping tip the other way and pipe "leaves" in the centre. Place the marshmallow in the centre and the ears above it and pipe icing on the ears and around the snout. Pipe a couple of small rounds to sit the eyes on and then add two eyes and a brown snout using the m&ms. Repeat with the remaining cupcakes. 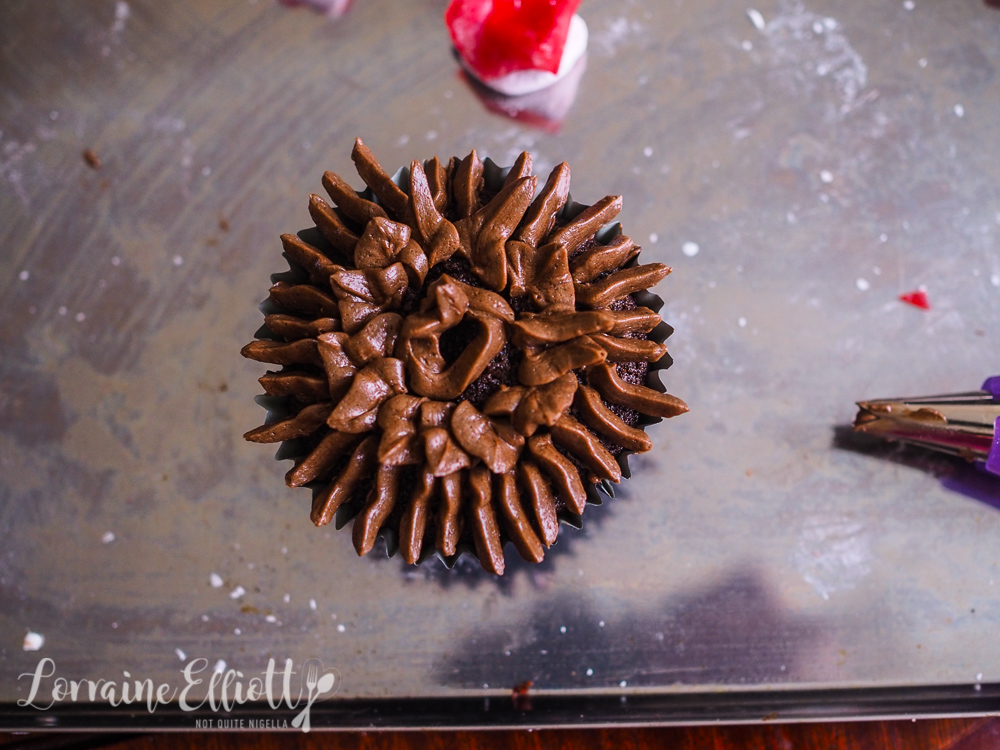 Step 6 - Place the #3 tip in a piping bag and add the white buttercream to this. Pipe little teeth and fangs on the perimeter of the fruit leather. The buttercream will set if refrigerated making it easier to transport them. 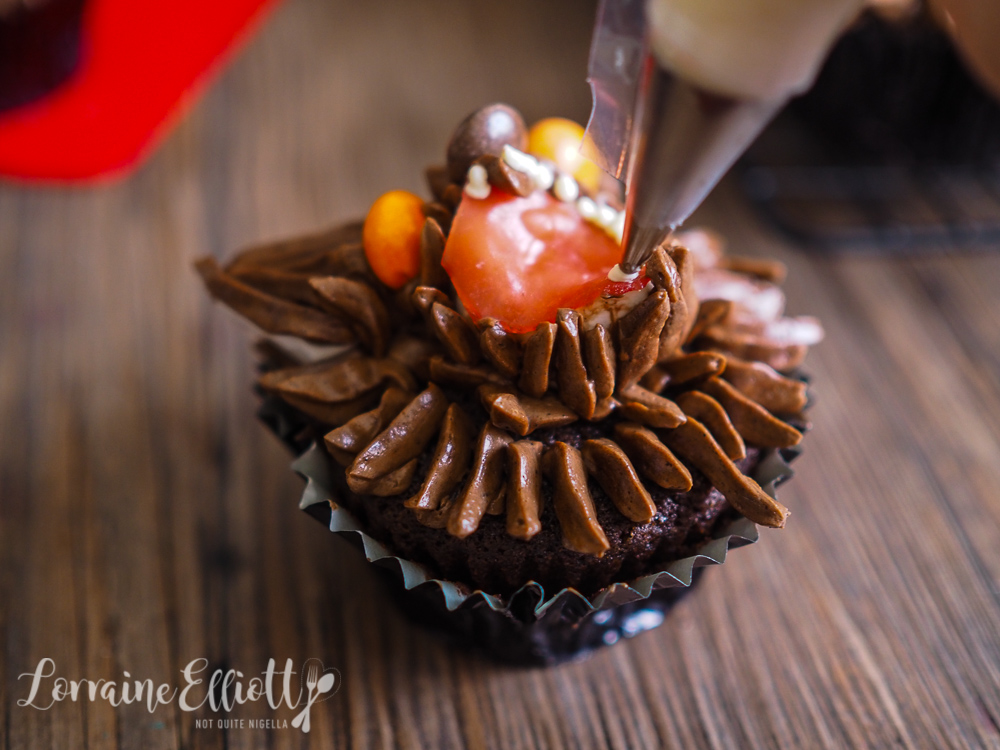 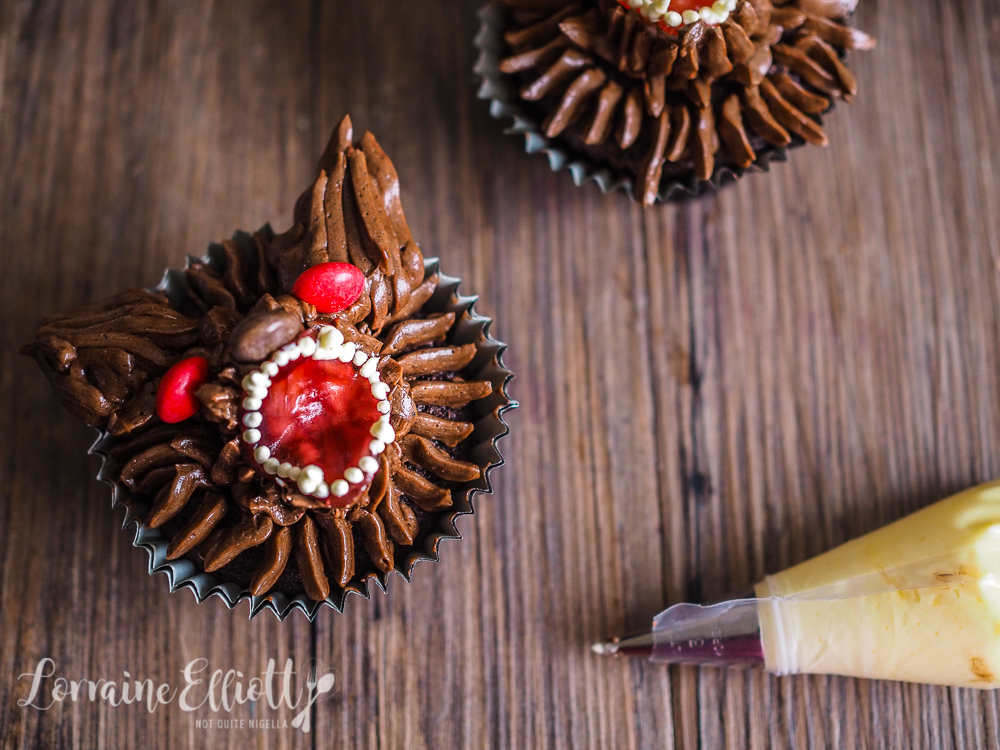 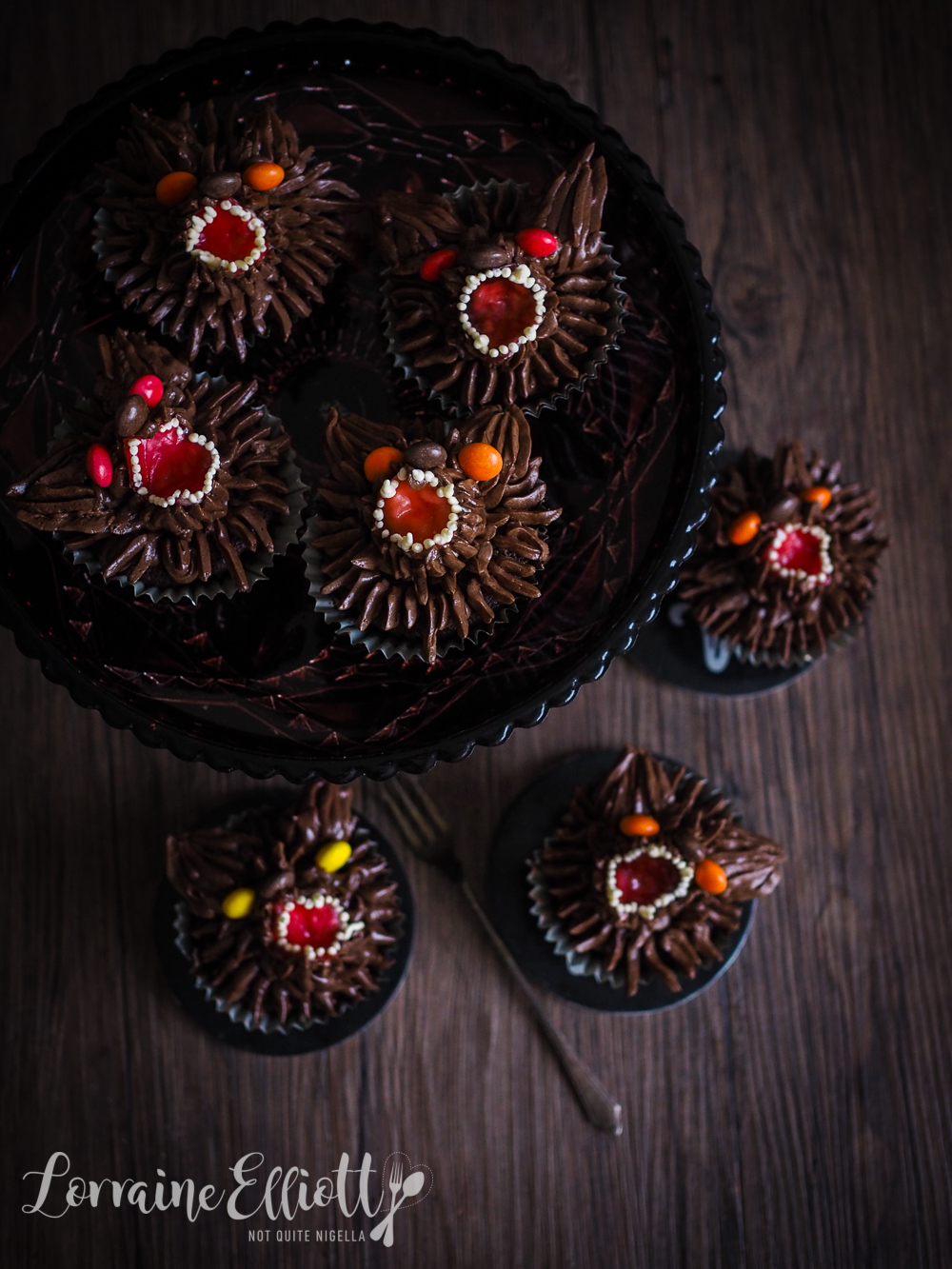