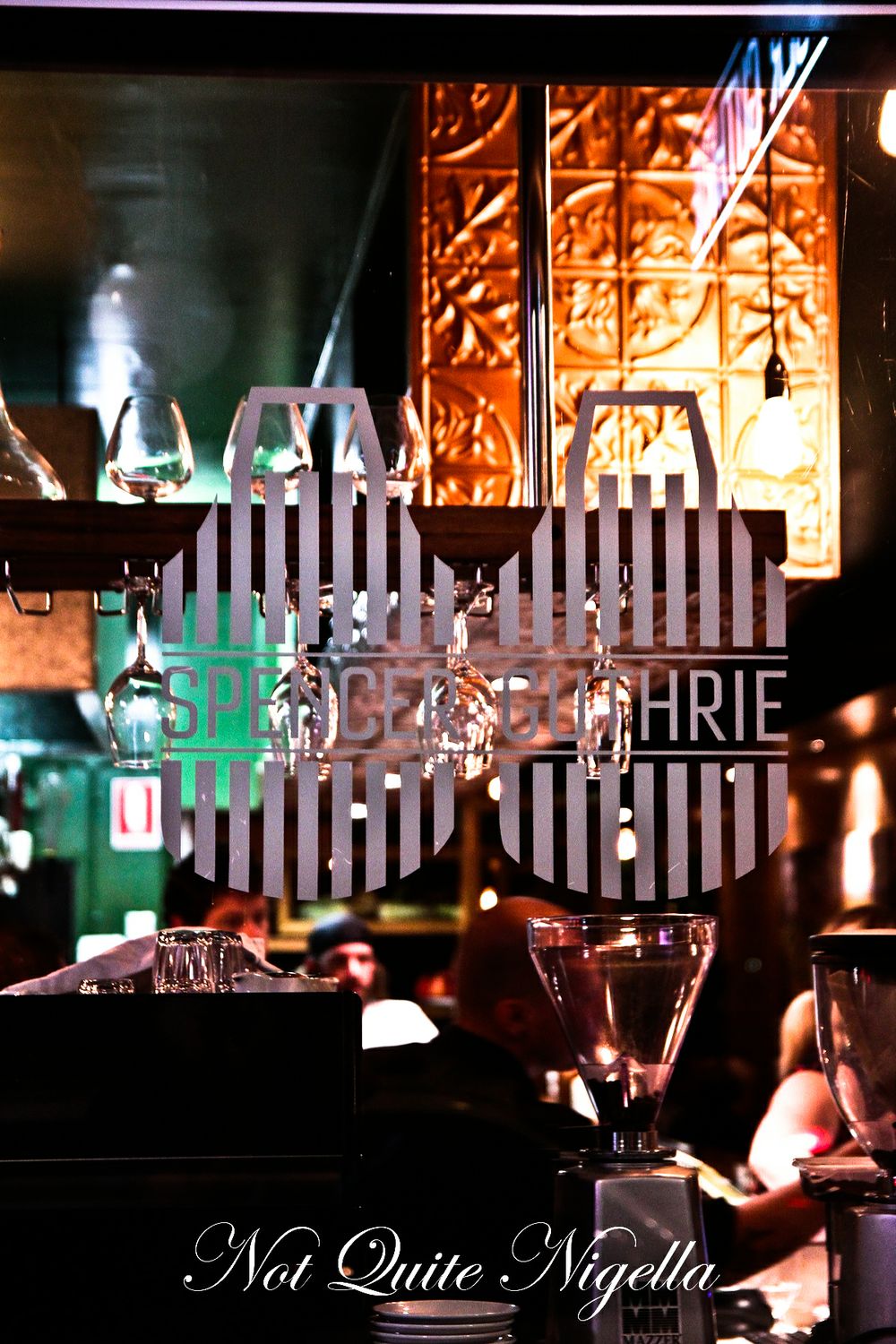 "I don't think I want to be called Assman any more" Mr NQN's brother said to us one night.

"Fair enough" we answer, after all he was only called this because he loved Seinfeld and was in Asset Management. Since his vocation change it seemed less relevant so he requested that his nom de plume be changed to Manu (also nothing to do with the chef). 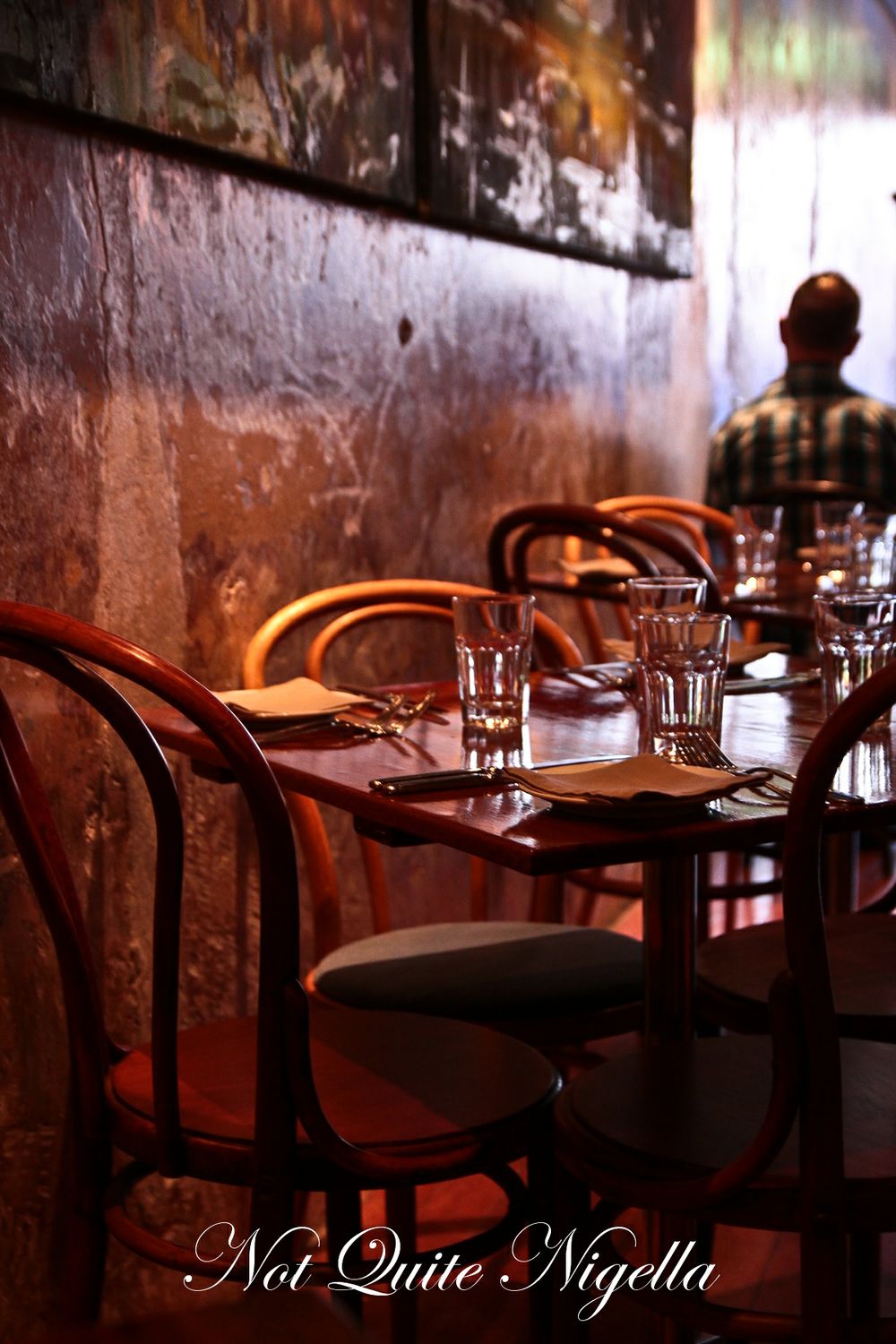 Mr NQN, Manu and I are in the car on the way to Spencer Guthrie where we are to meet Queen Viv for an early dinner. The restaurant is attractively decked out with polished concrete walls, greenery to emphasise the environmental aspects of the menu (sustainable, eco-conscious) and the kitchen where the two chefs (Spencer and Guthrie) cook is at the front so you walk past them to get to your table or take a seat at the bar seating in front of them and watch them cook. The toilet door is completely covered in astroturf and at the back of the restaurant sits some box arrangements of plants. 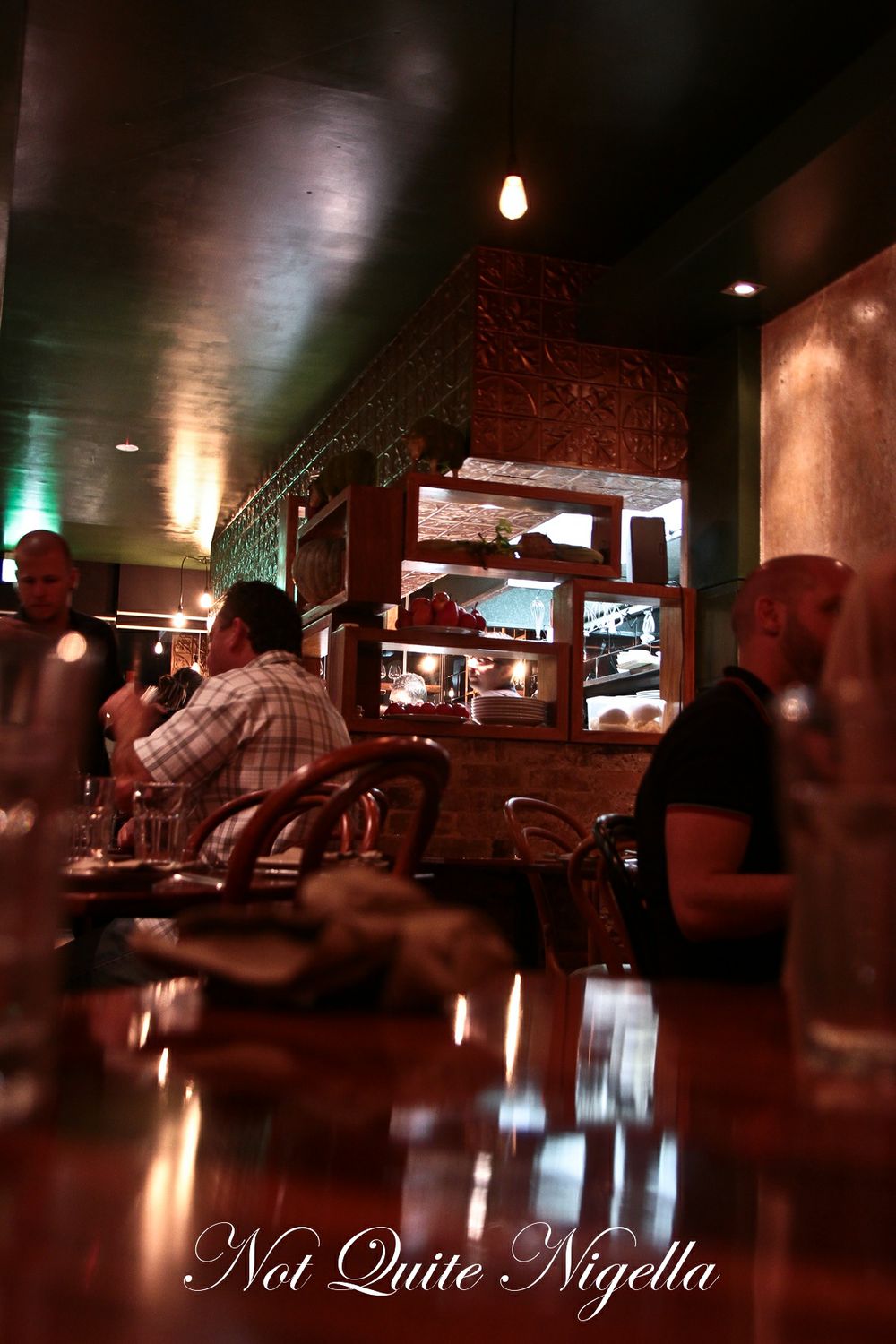 The menu is compact with five entrees and mains and four desserts to choose from. It is given to us as a single sheet of paper folded in three and is said to change regularly. Our waitress is very friendly as are the rest of the wait staff and she tells us that at the moment it is BYO (a bottle shop is nearby). Fittingly, they are participating in the Earth Hour initiative so at 8:30pm, if we are still here, the lights will be turned off and people and food will be lit by candles. Complimentary bread is brought to the table with around of butter and salt. It's a sun dried tomato and black olive bread with a thin crust and a soft interior. 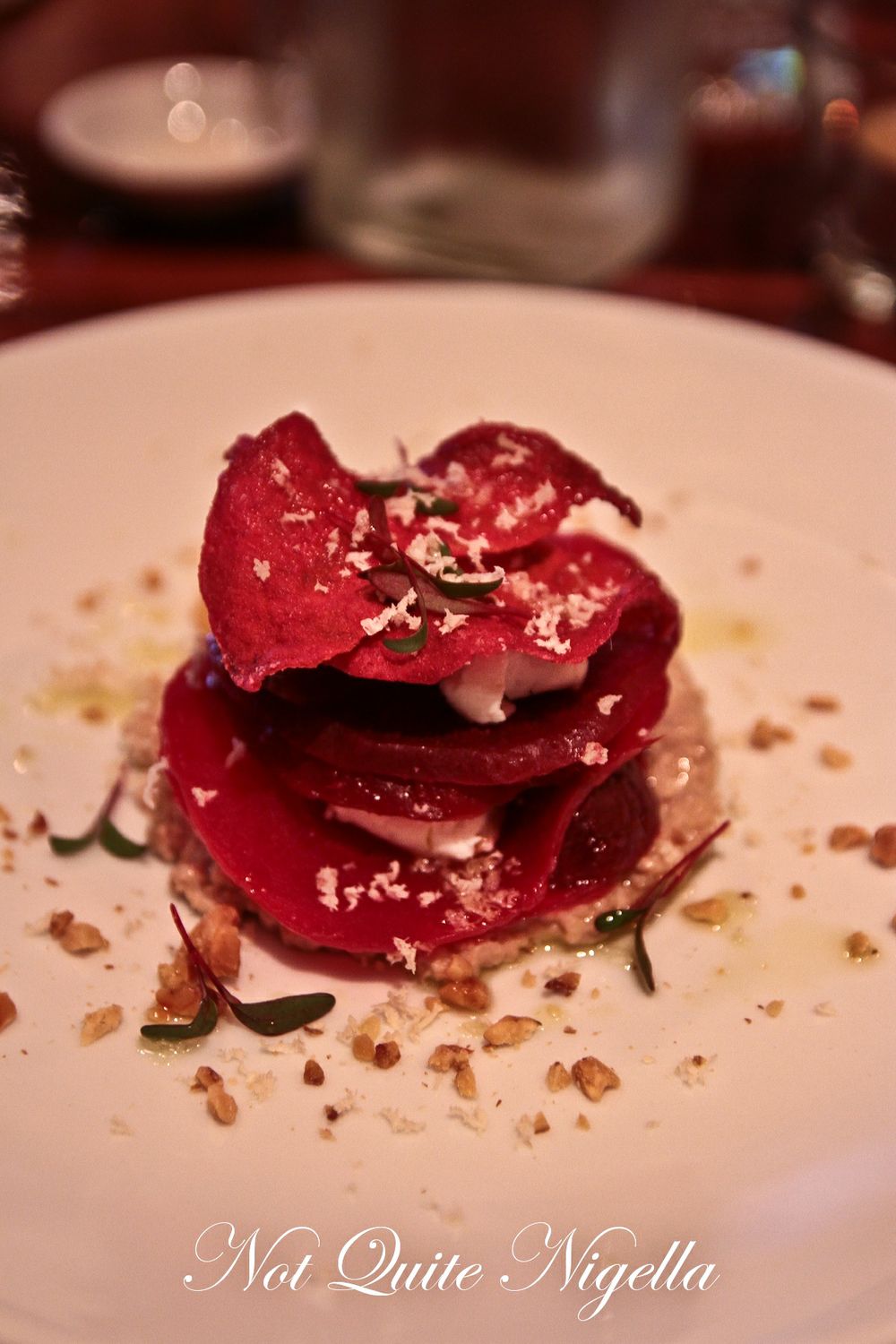 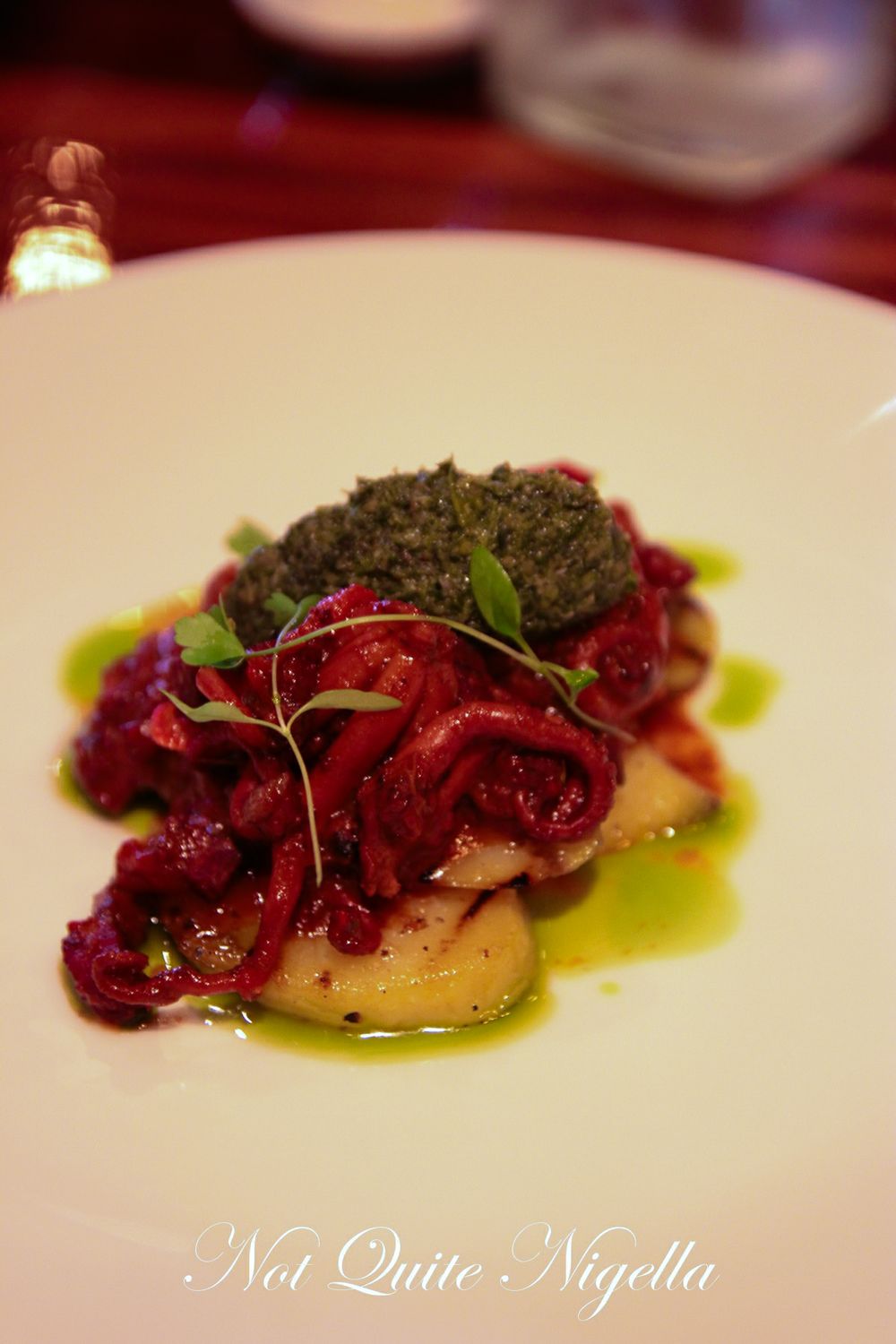 Queen Viv found this a bit too spicy but I like the heat of this dish. The squid, a little resistant, is served with chorizo, grilled sliced kipfler potatoes and a "green sauce" which is redolent in herbs and sits as a quenelle on top. It's bold and full of flavour and spice. 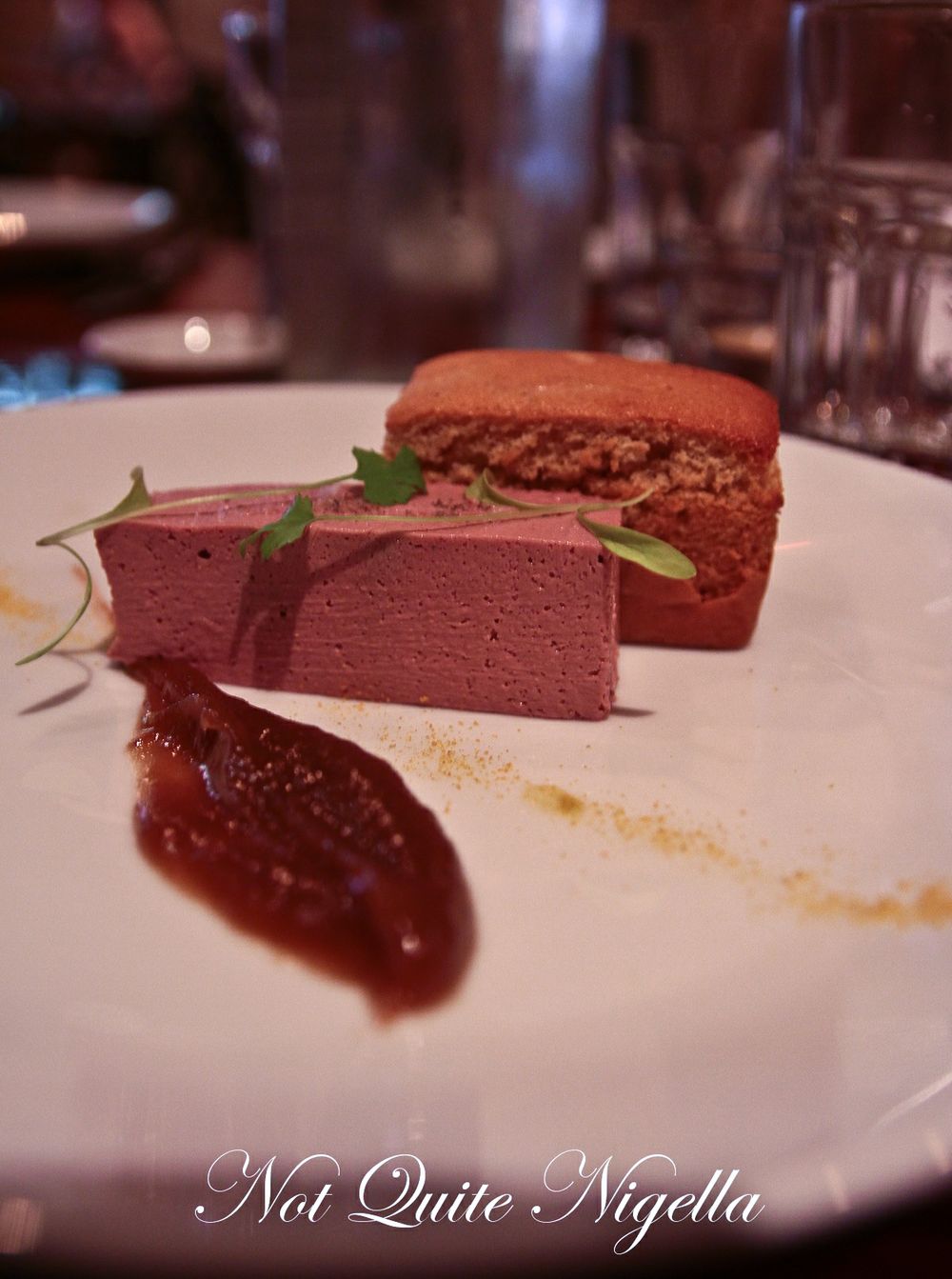 However, my favourite entree along with the beetroot was the parfait which was light as air and so smooth it was like slicing into whipped butter. It was served with a delicious and not too sticky fig jam and a neat little loaf of gingerbread. 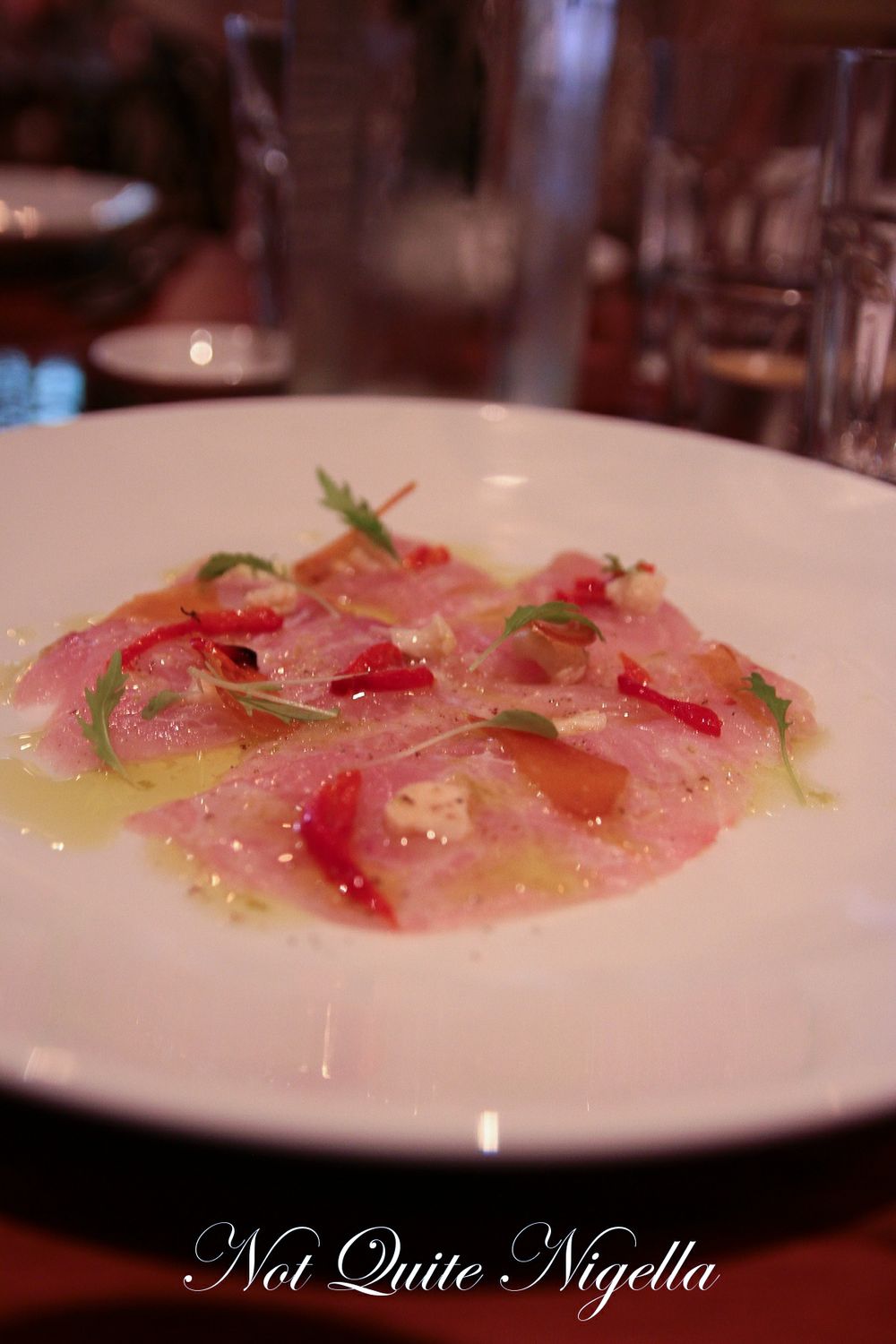 The ceviche was tangy with fresh flavours and the olive oil and lime were particularly strong with the roasted chilli light and lingering in the background. 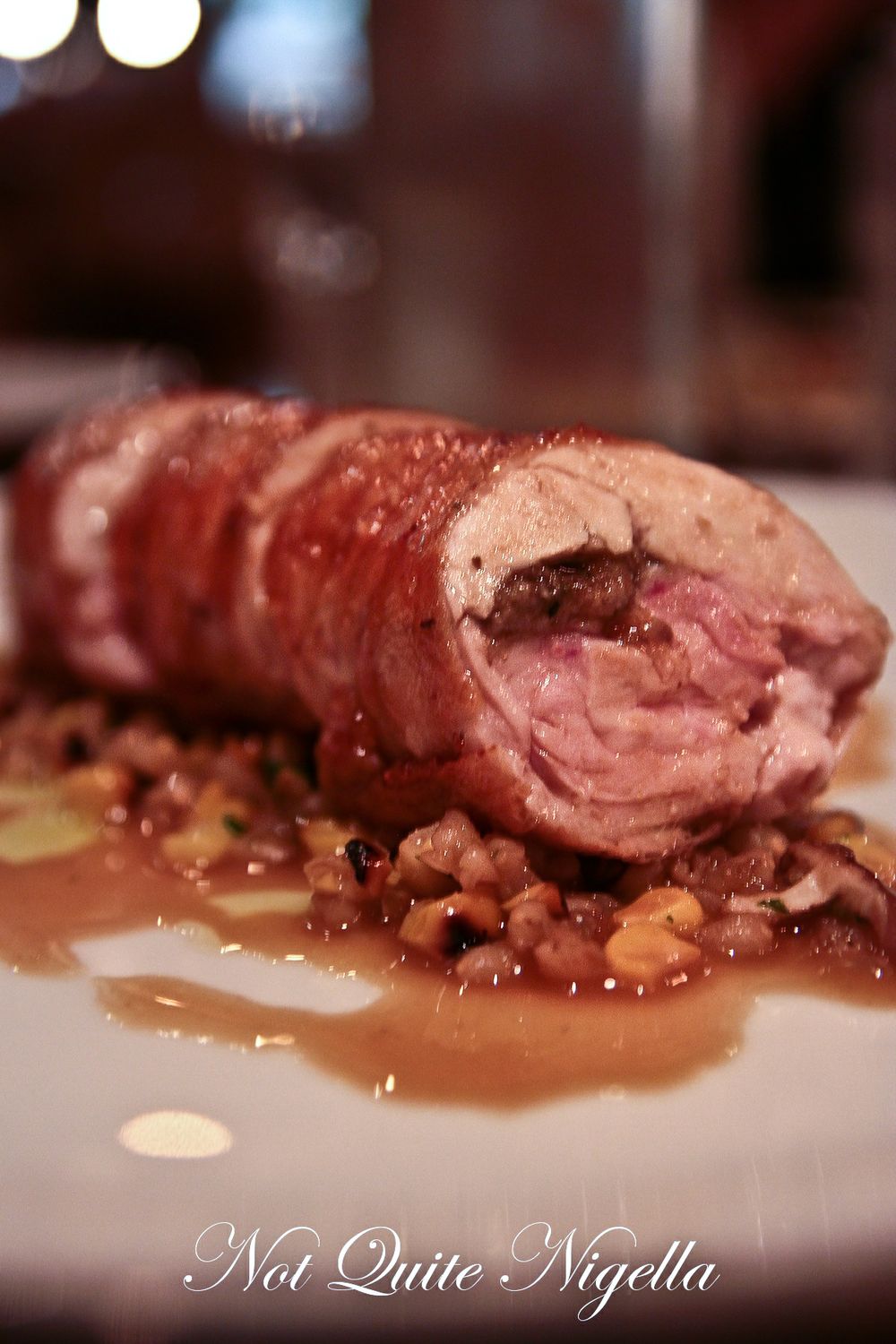 Then came time for the mains which considering the size of the kitchen, we didn't have to wait long for. The spatchcock was tender although it needed some seasoning. It was served on a bed of sweetcorn and barley which gave it some textural contrast. 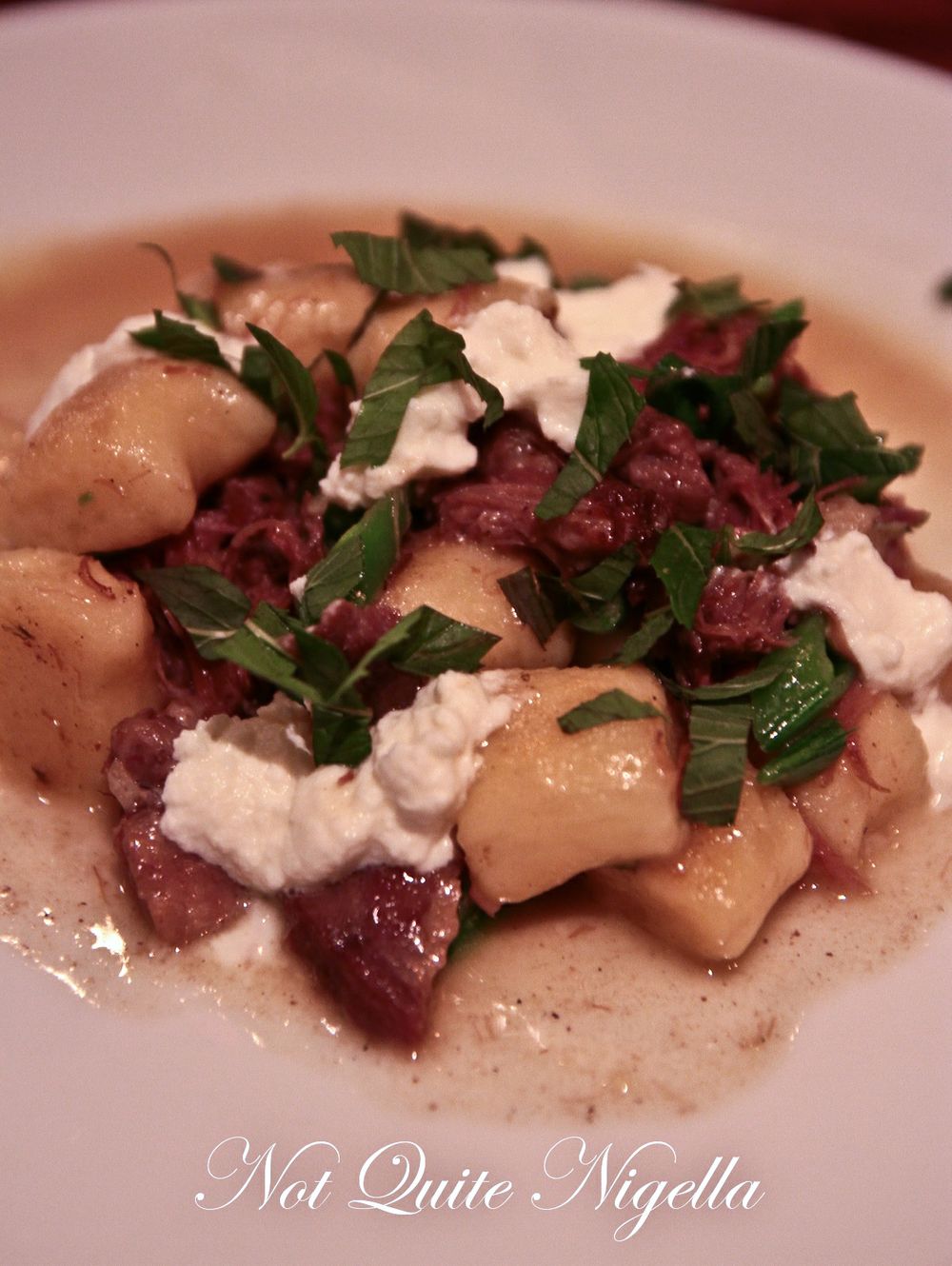 I liked the company of the potato gnocchi which were soft bite sized morsels of soft potato gnocchi with slow cooked and pulled apart lamb accented with clouds of ricotta, diagonally sliced green beans and mint to lift. 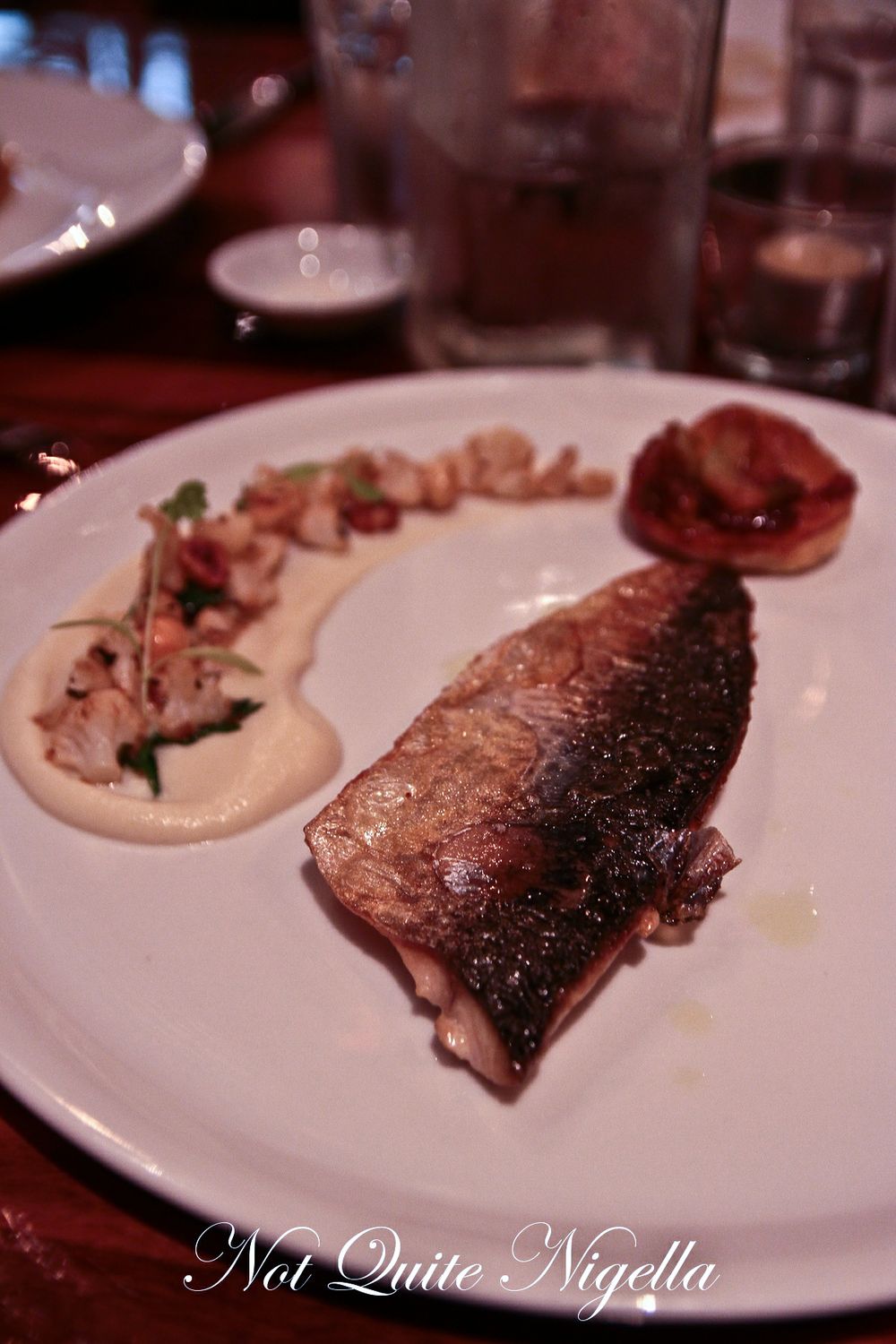 Mackerel is really a fish for people that love fish like sardines as it is strong and fishy. Since I'm not a huge sardine lover I don't really go for this main preferring others, although if you like oily, strong fish this would be the order. Prettily plated it comes with a cauliflower puree, halved toasted hazelnuts, tiny cauliflower florets and a sweet and savoury pearl onion tarte tatin. 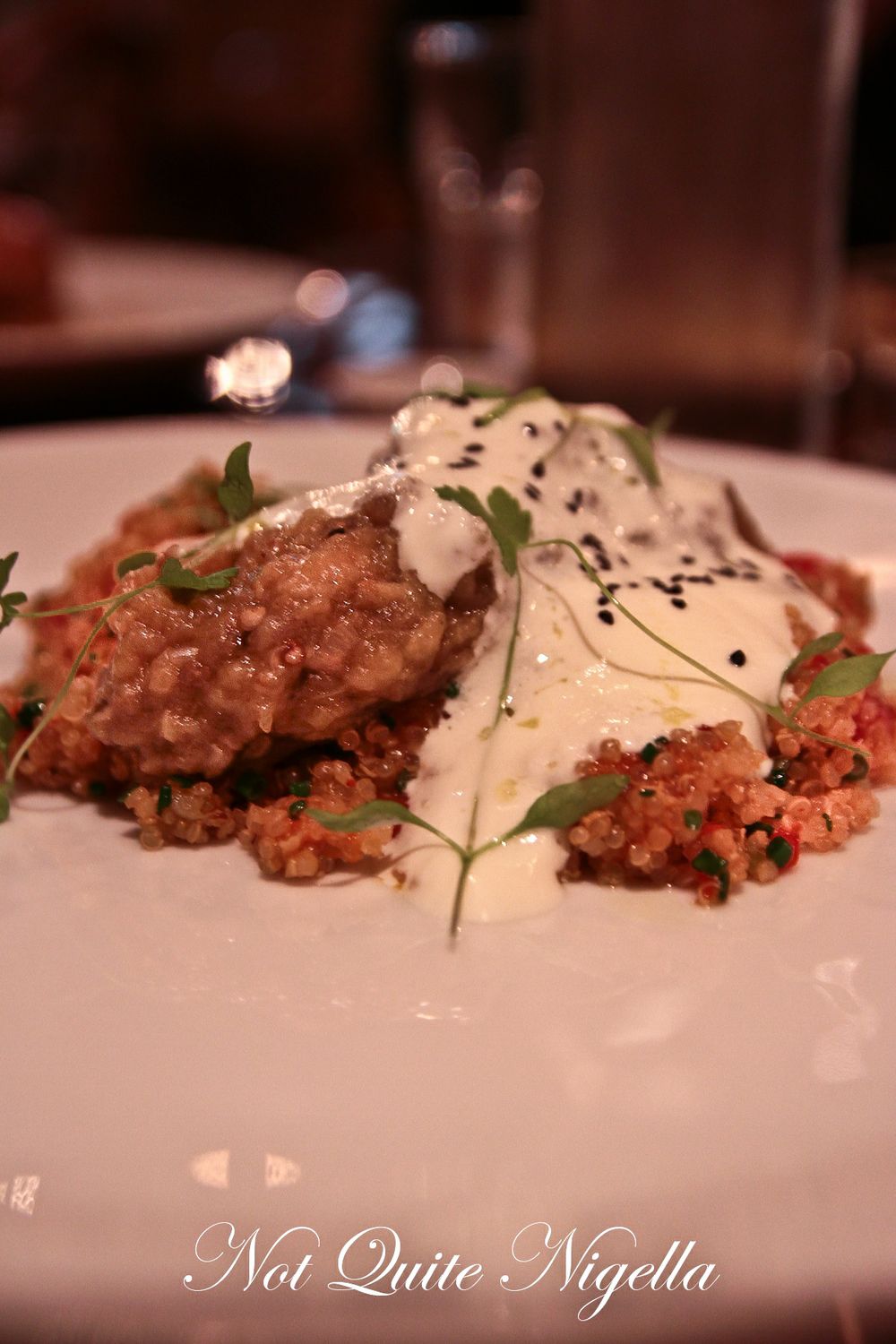 I try a little of Manu's grilled eggplant with spicy romano pepper and quinoa and the textures are soft and nubbly with a nice heat from the romano pepper. 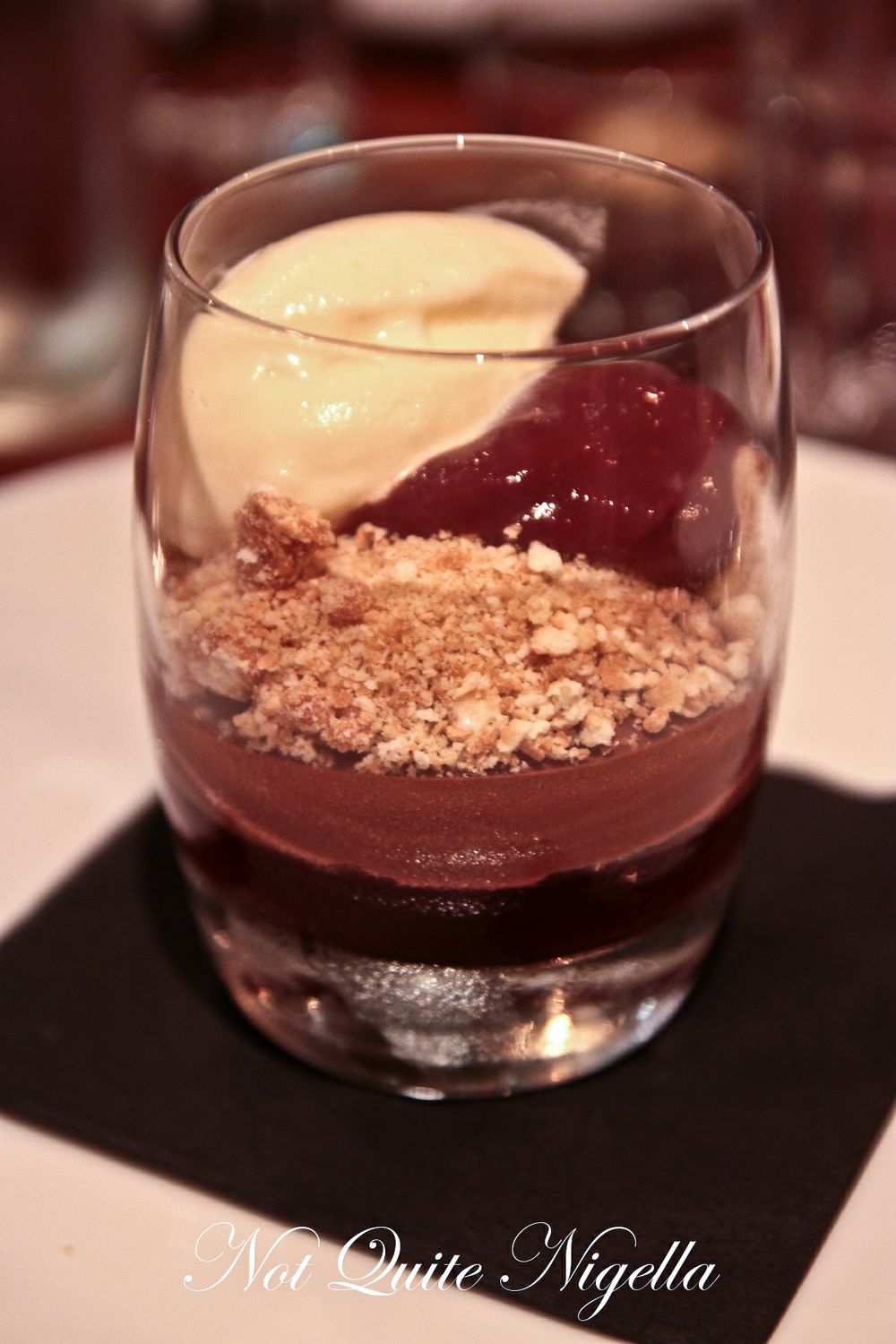 And with four choices for dessert it seemed that it was destined that we would try all four! The first dessert is served in a glass and at the bottom there was a layer of strawberry jelly which tasted of fresh strawberries, a layer of soft chocolate on top and then some lightly salted biscuit crumbs and a scoop of buttermilk ice cream and another fruit puree that I didn't get to try. 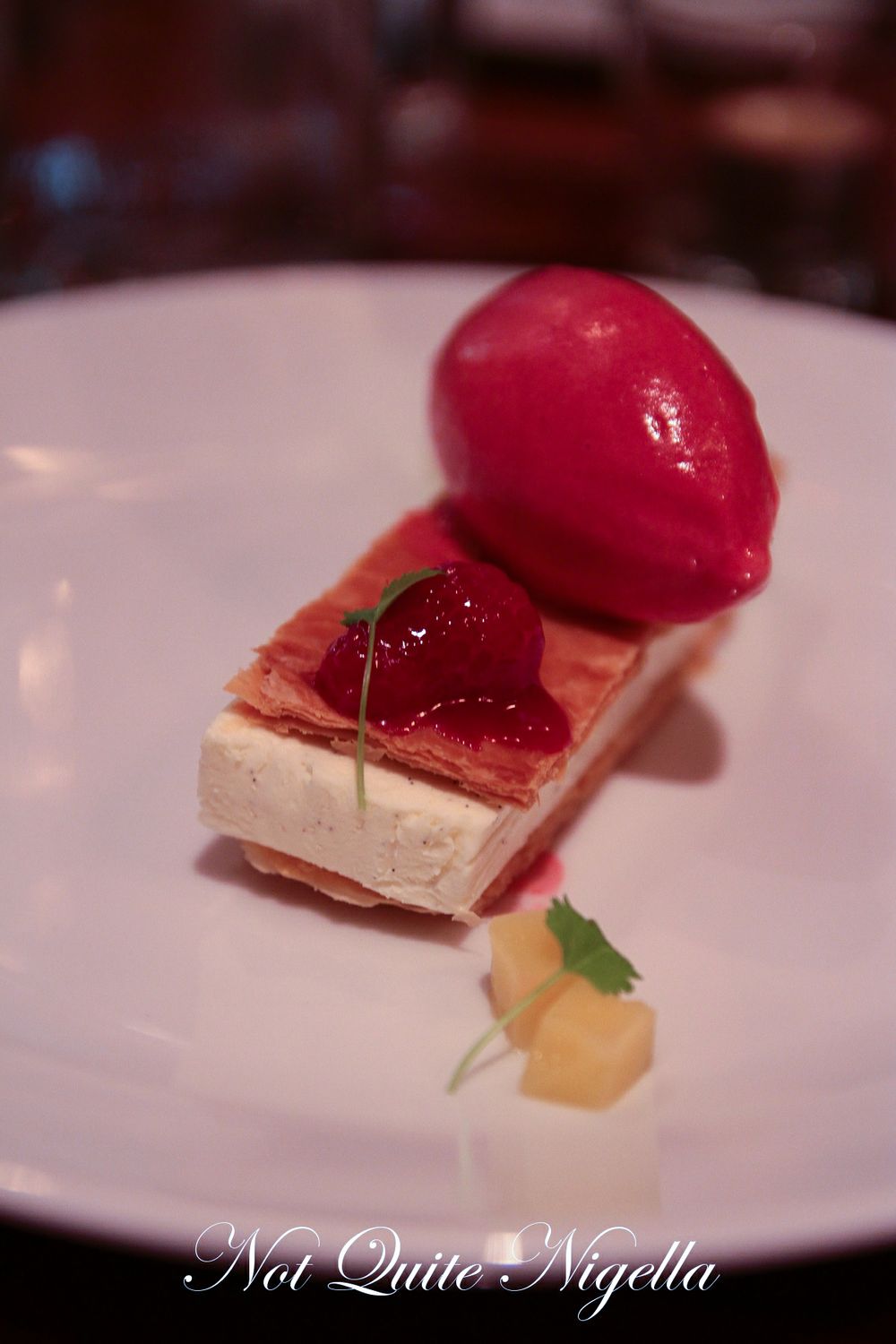 With filo pastry rather than puff the parfait was aromatic with vanilla and had small drops of tart lemon curd and a smooth, silky raspberry sorbet. Most of the desserts we found weren't overly sweet and balance tartness with the sweeter elements. 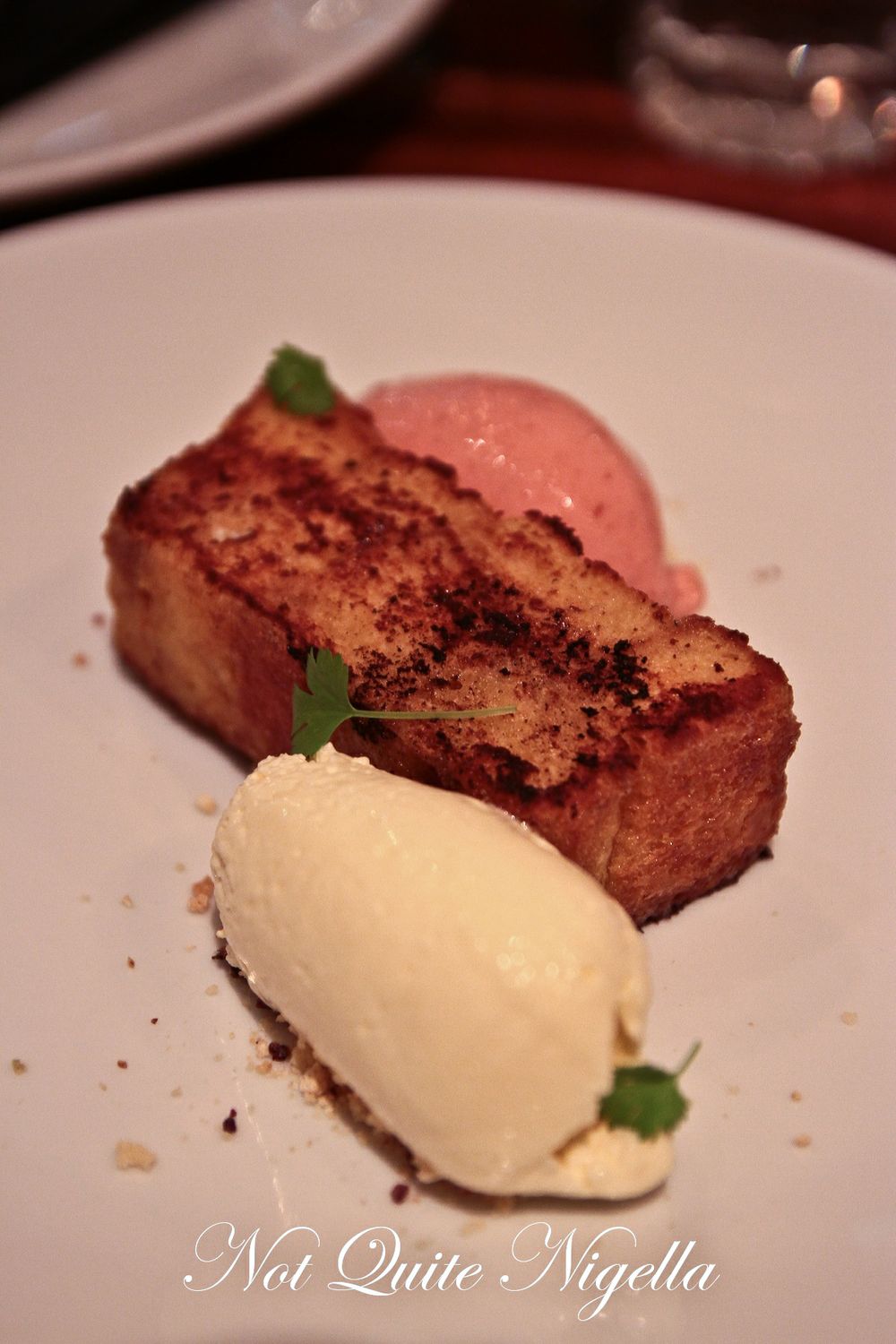 The warm French toast had an almost savoury aspect to it and the yogurt mousse was very tart although I really liked the plum sorbet and the texture of the French toast with its lightly toasted, crispy outer. 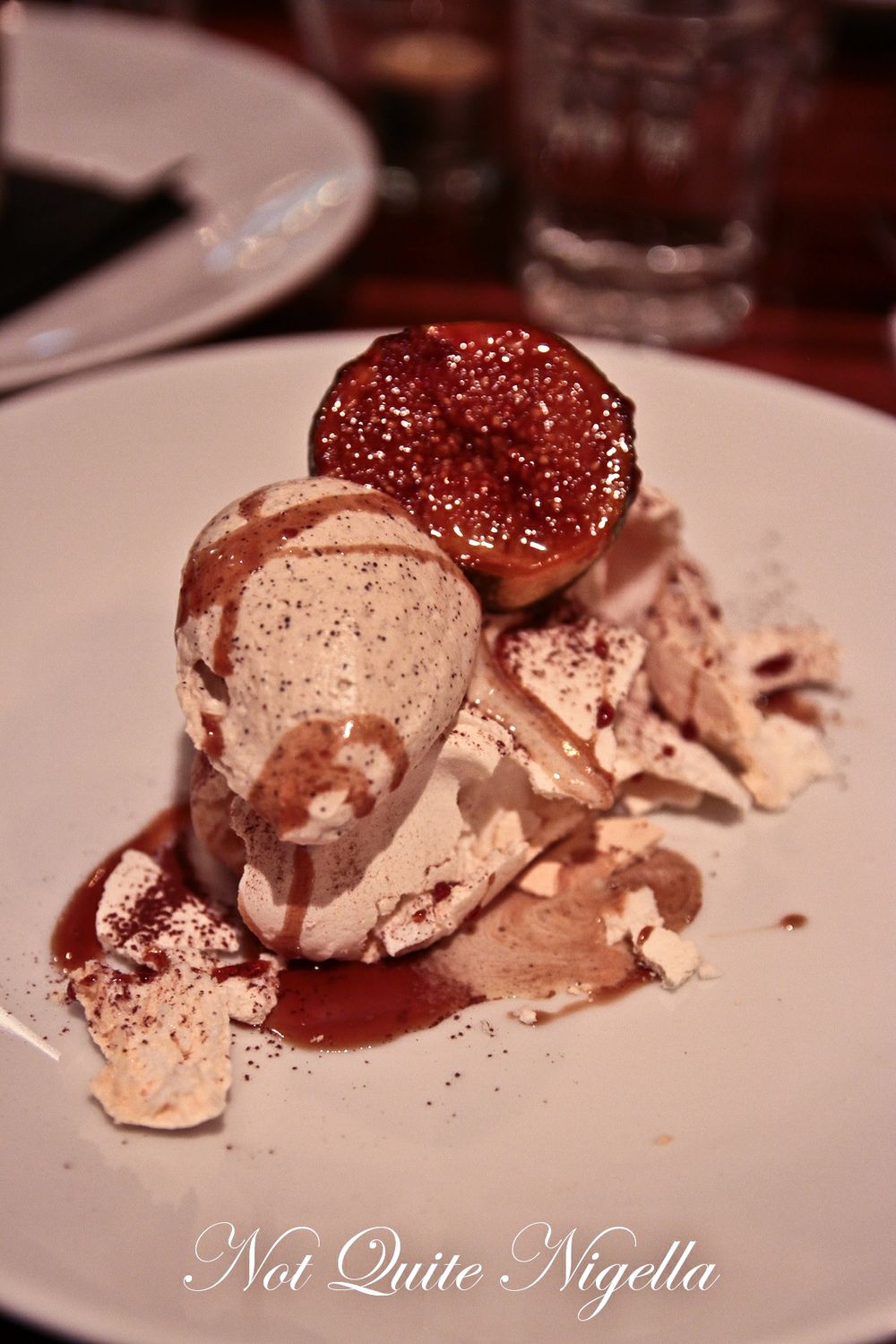 Queen Viv loves the meringue (slightly chewy but pretty much like a regular meringue) with a quenelle of unsweetened ground coffee cream on top and half a plump black fig that had been caramelised. The dish was finished with a syrupy port.

It's just 8 o'clock  so alas we miss the excitement of Earth Hour. The bill is a reasonable $50 per person so we wander off into the night to seek some candlelight elsewhere.

So tell me Dear Reader, did you take part in Earth Hour this year or in past years? And do you like strong flavoured fish like sardines or mackerel? 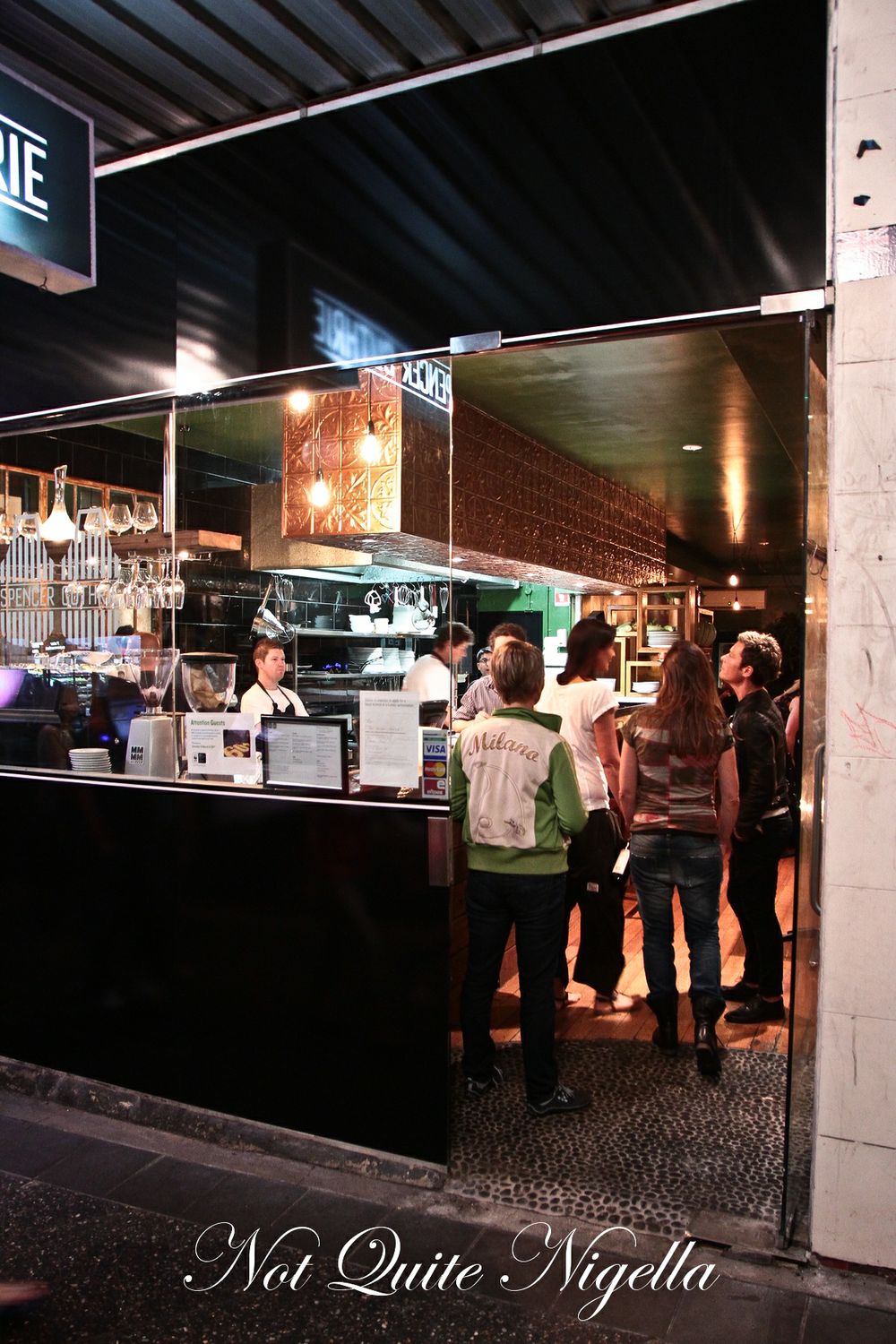