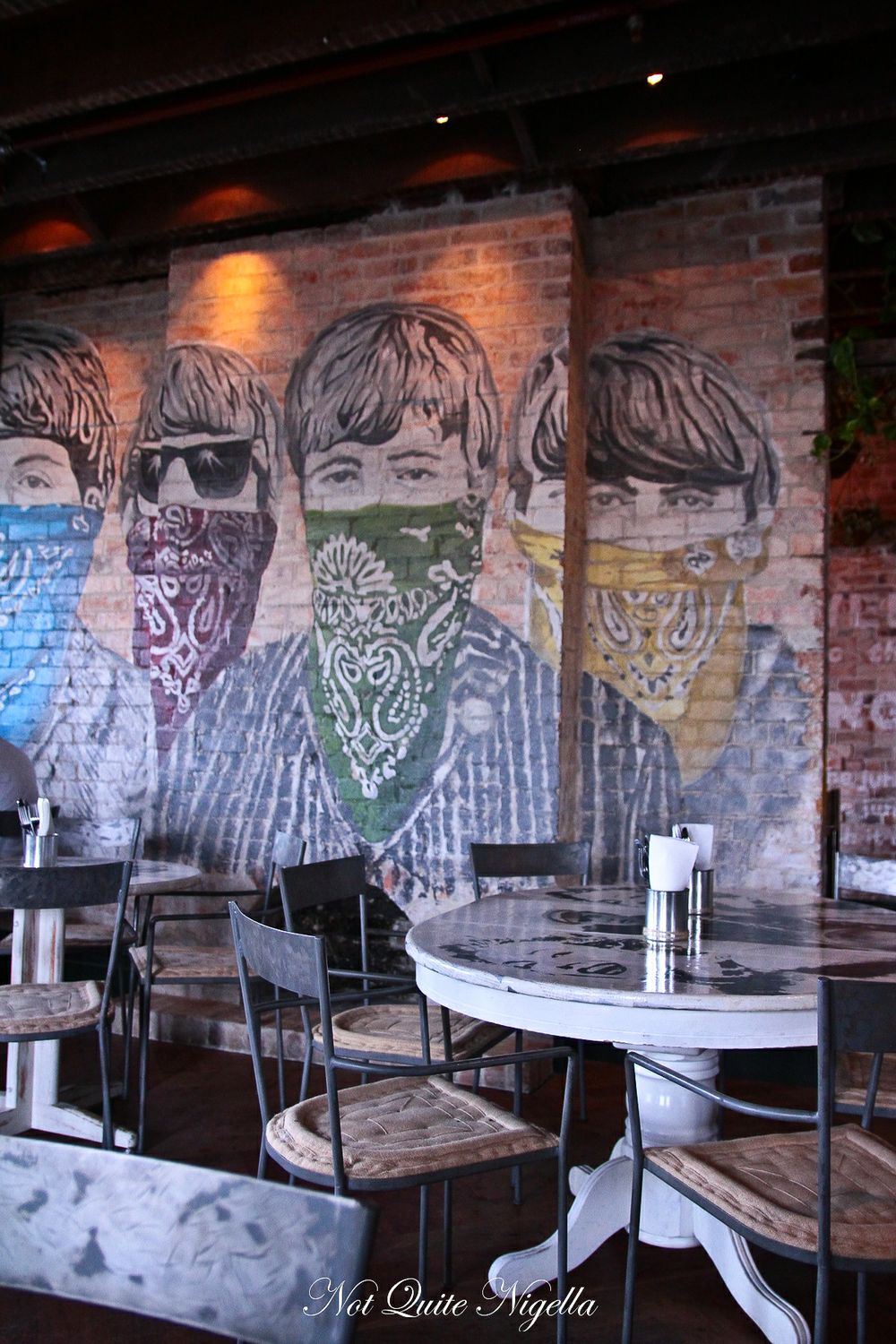 I thought that I might have a bit of an uphill battle pitching a place called "The Animal" for a girl's weekend lunch. But of course I should underestimate my friends who won't even ask why a place is called "The Animal" or politely suggest that we go to afternoon tea instead. The Animal restaurant in question is part of the 130 year old Newtown Hotel on King Street in Newtown. The menu has Greek influences from executive chef George Diamond's Greek heritage. The hotel itself is newly renovated and we make our way upstairs to the Animal which is on the first floor and open for lunch and dinner seven night a week. I'm lunching with Brydie, Celia and Tania. 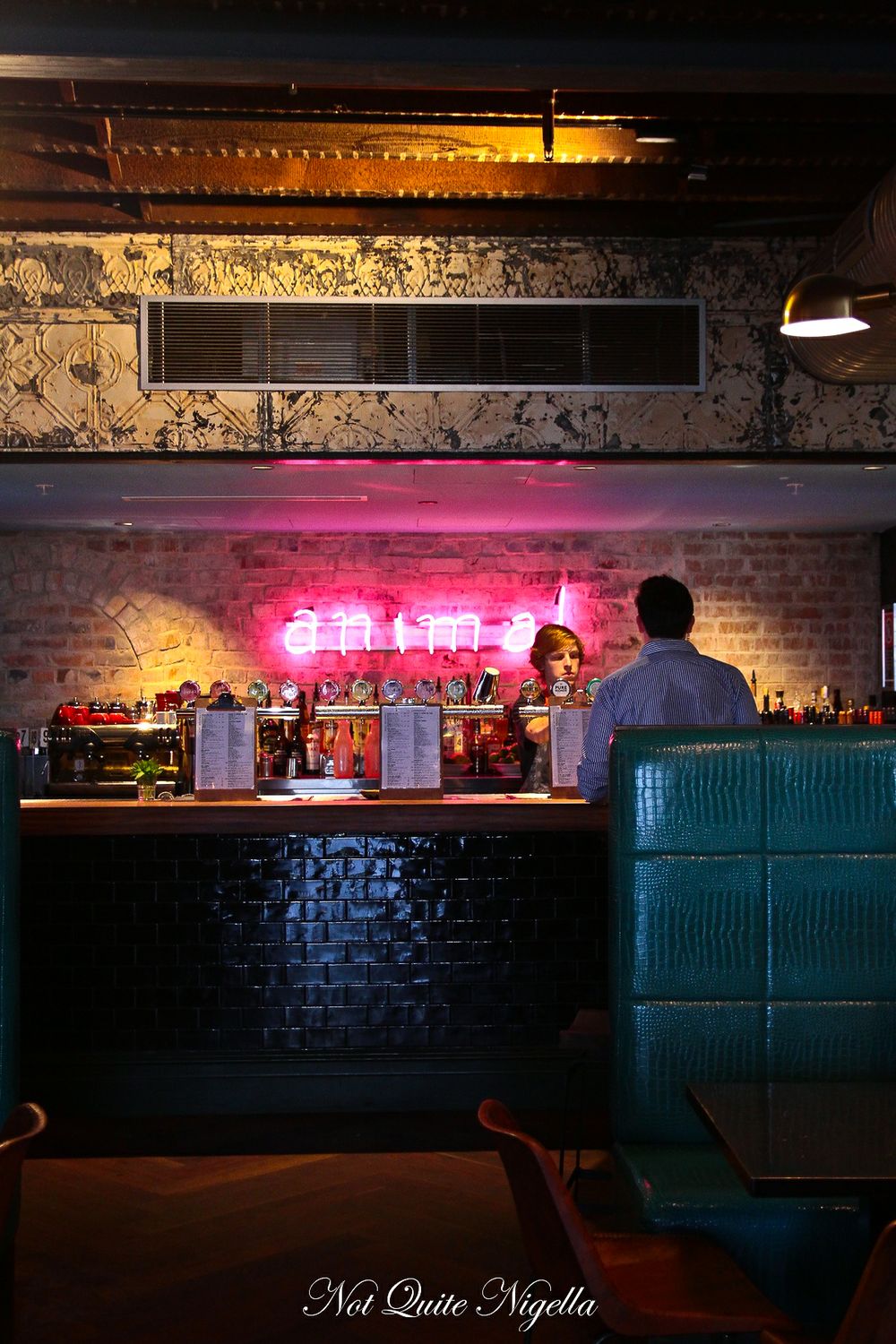 I'm not sure how to describe the decor, it's eclectic at the very least with a converted "purple onion" caravan for the private room. Some of the murals suggest Americana while there are booths, a large table has a comfortable looking couch at one end and chairs surrounding it. Other tables have black and white pictures of Marilyn Monroe printed on them. 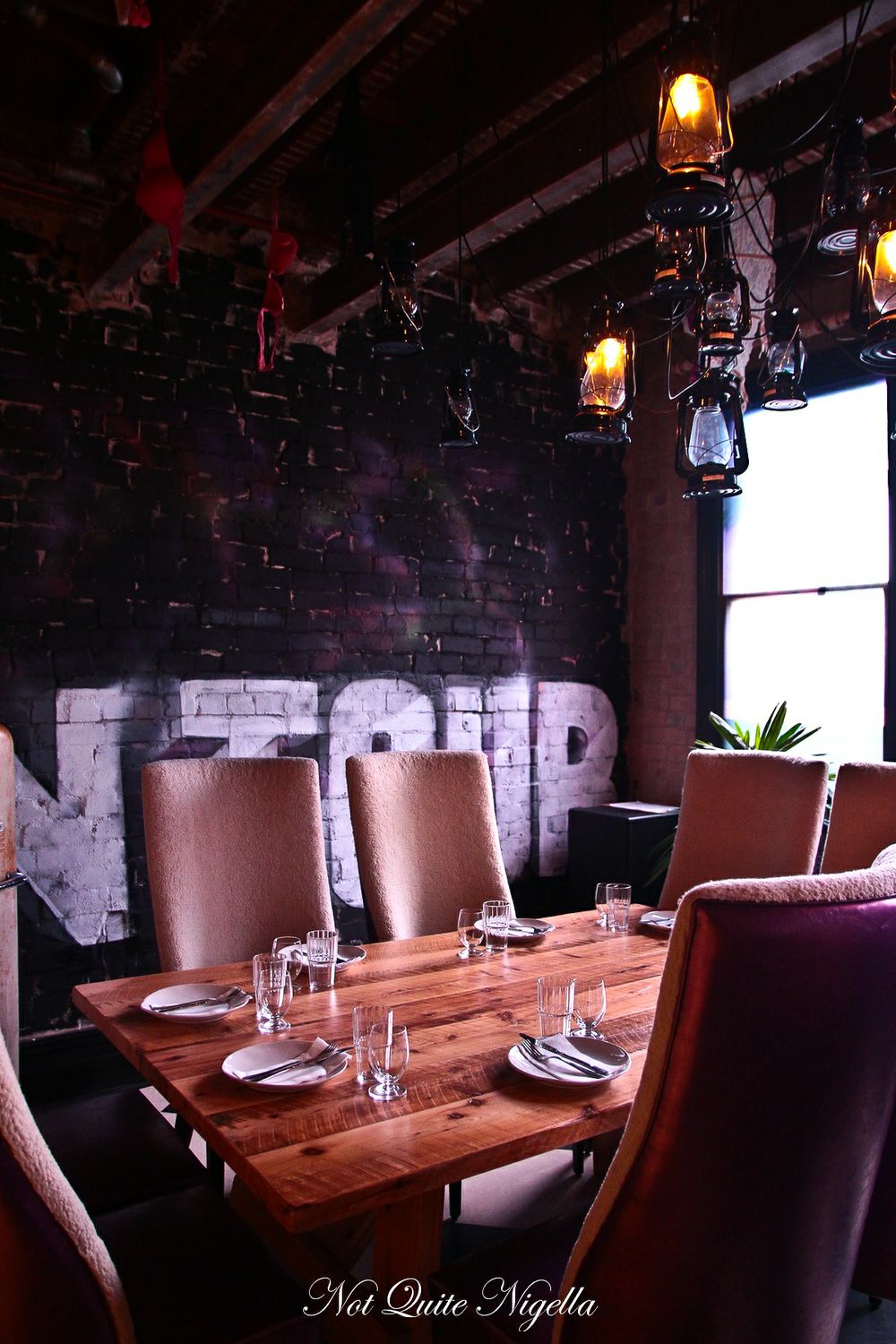 Cushions have pictures of tigers on them and "Welcome to The Jungle" is spray painted on one wall.  The open kitchen has beasts on a spit roast. Upstairs, there's also a theatre that seats eighteen people where you can order food. Although I'm not drinking as I'm driving, I take a quick peek at the drinks menu which has a sense of humour. There's a cocktail called "Keith Richards' Coconut Incident" and "Better Than Jesus." 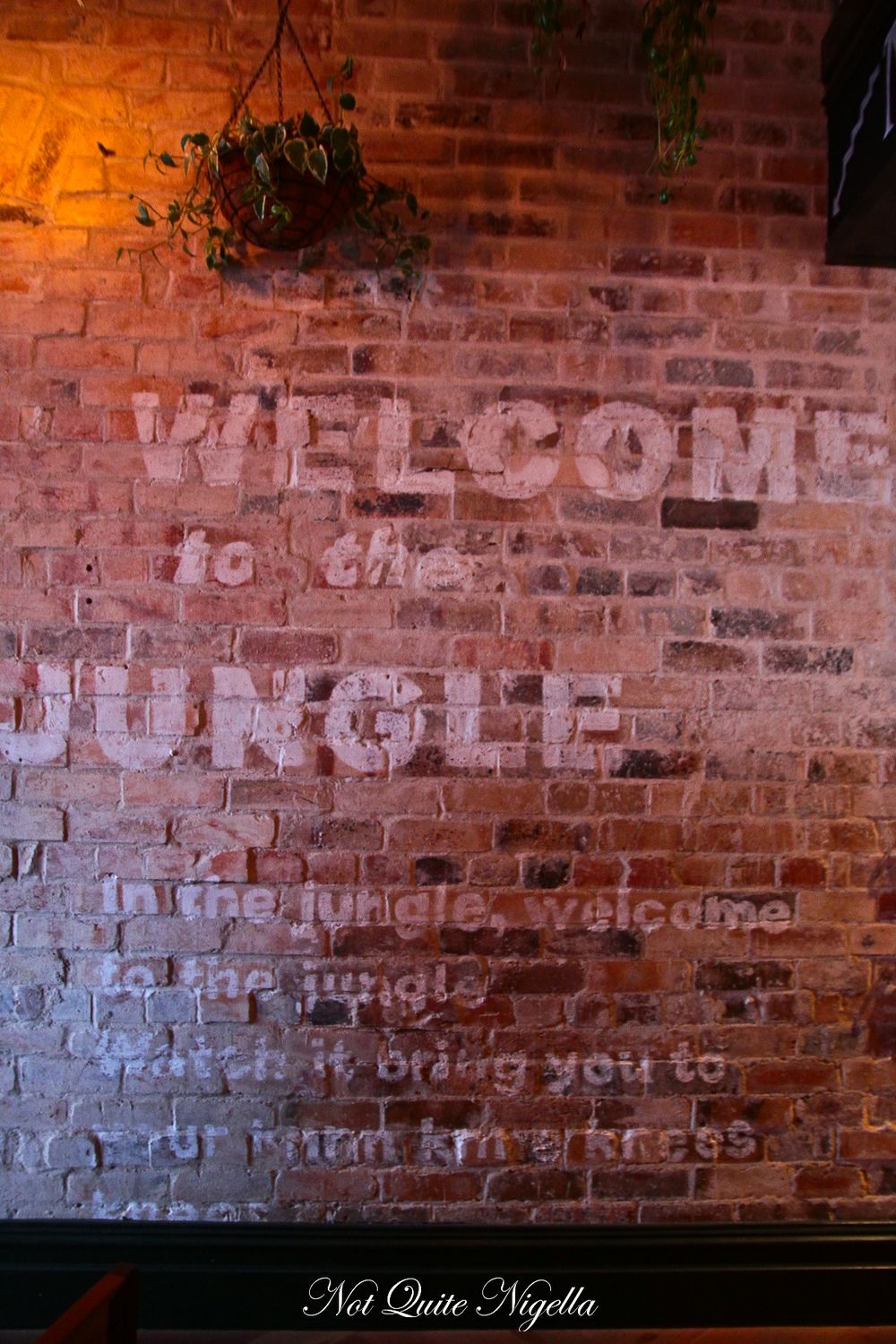 We ask for the recommendations from the waitress. Despite the fact that it's really quite busy this Sunday afternoon the food arrives quickly. 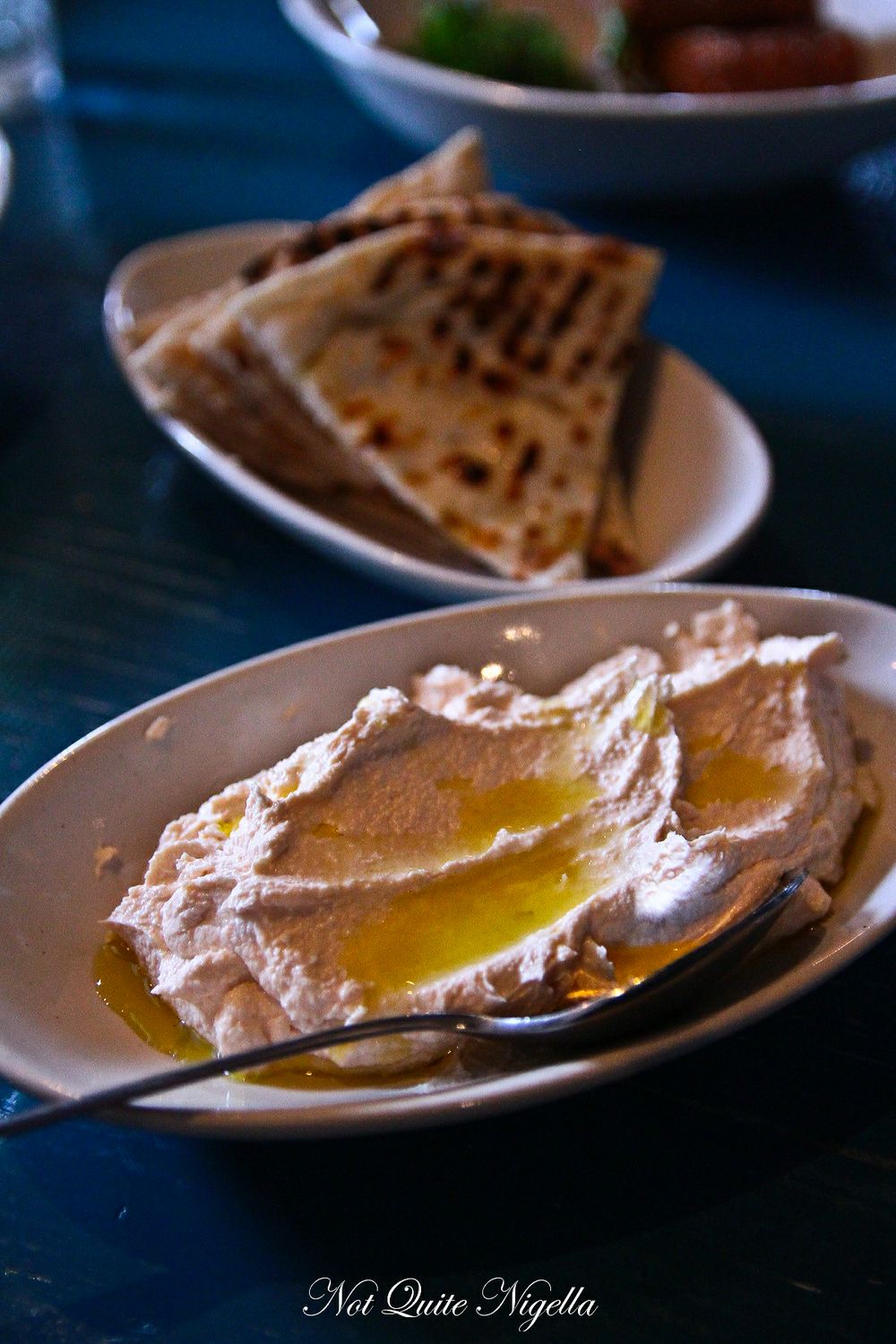 I adore taramosalata, the cod roe dip that is creamy and rich with a touch of roe flavour. This is served with warm, grilled flat bread and is an unbeatable combination. Not quite as strong in tarama as I've had, it's thick and creamy and meant for spreading or scooping on the soft triangles of bread. 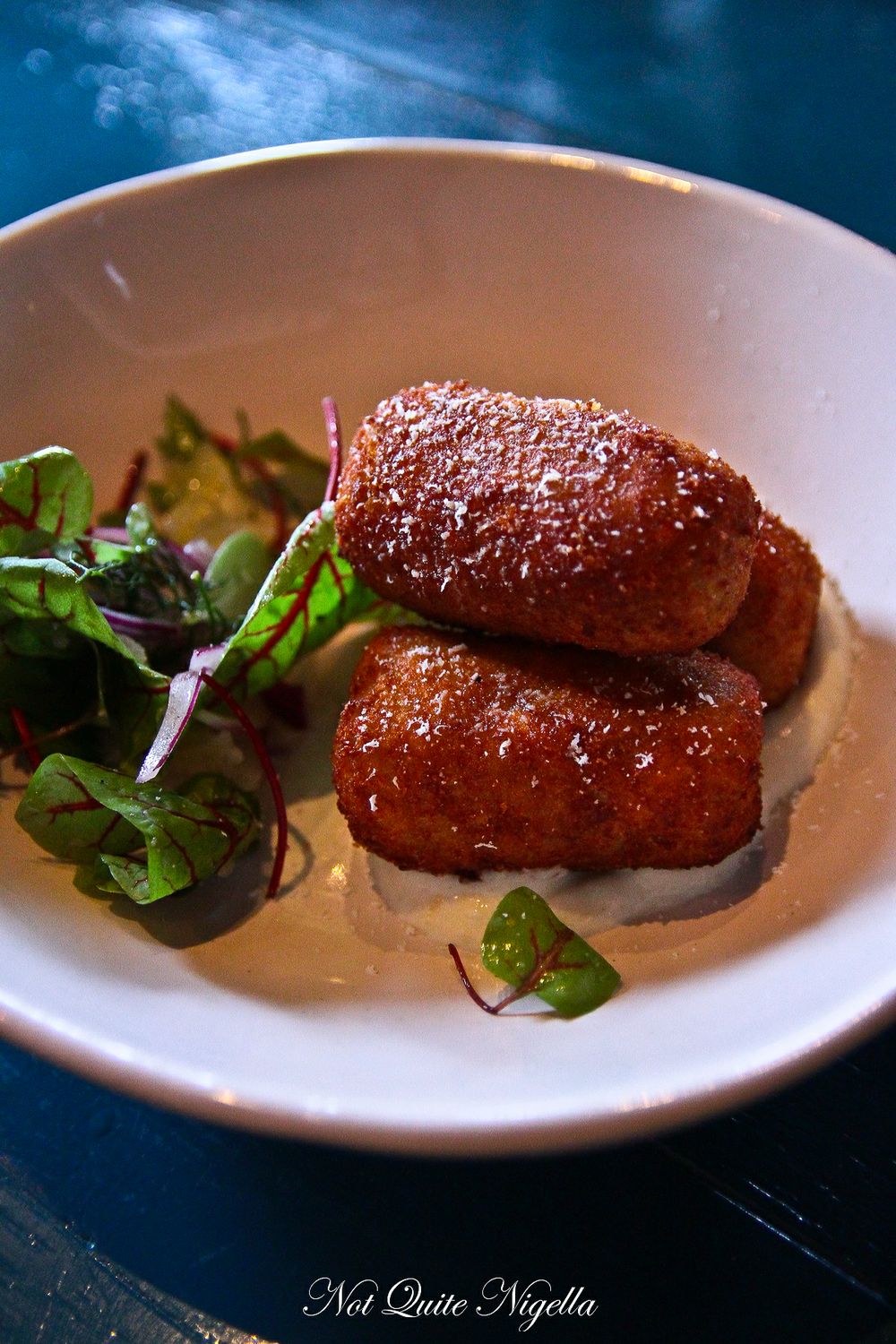 The salt cod croquettes came as three to a serve and although our waitress was very enthusiastic and friendly, we wished that she had pointed this out so that we could order four of them (quantities weren't mentioned on the menu). The croquettes were potato based mixed with salt cod, coated with breadcrumbs and deep fried until golden. They were served with a cauli?ower garlic puree as well as burnt butter (although I didn't really see this) and a salad with greens and red onion. 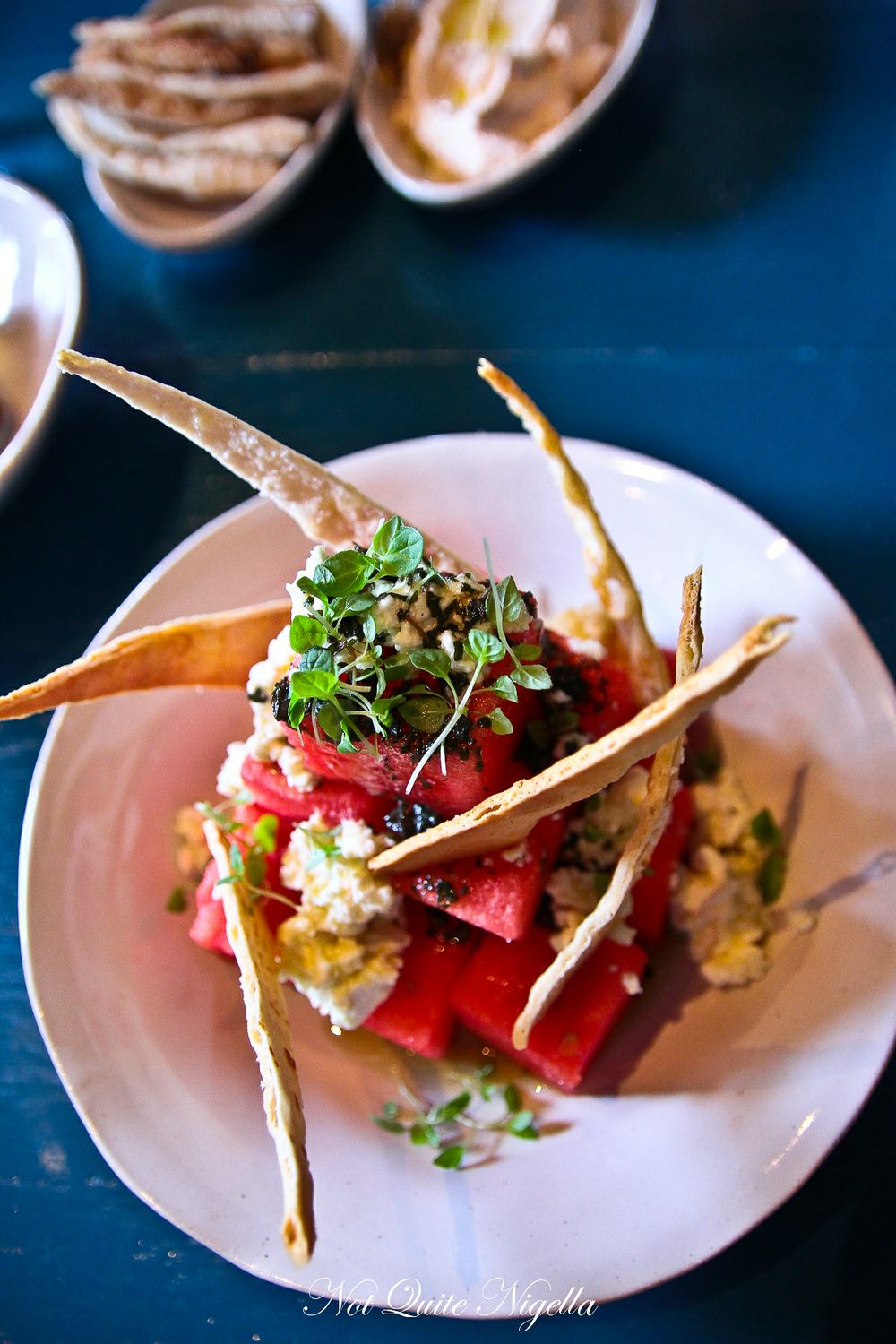 I really liked this salad which was prettily presented with cubes of watermelon stacked on top of each other, crumbled feta and mint and sharp and crunchy pita croutons. The topping of oregano also gave the super sweet watermelon a floral aspect to it and for a hot, humid day, this refreshed quite nicely. 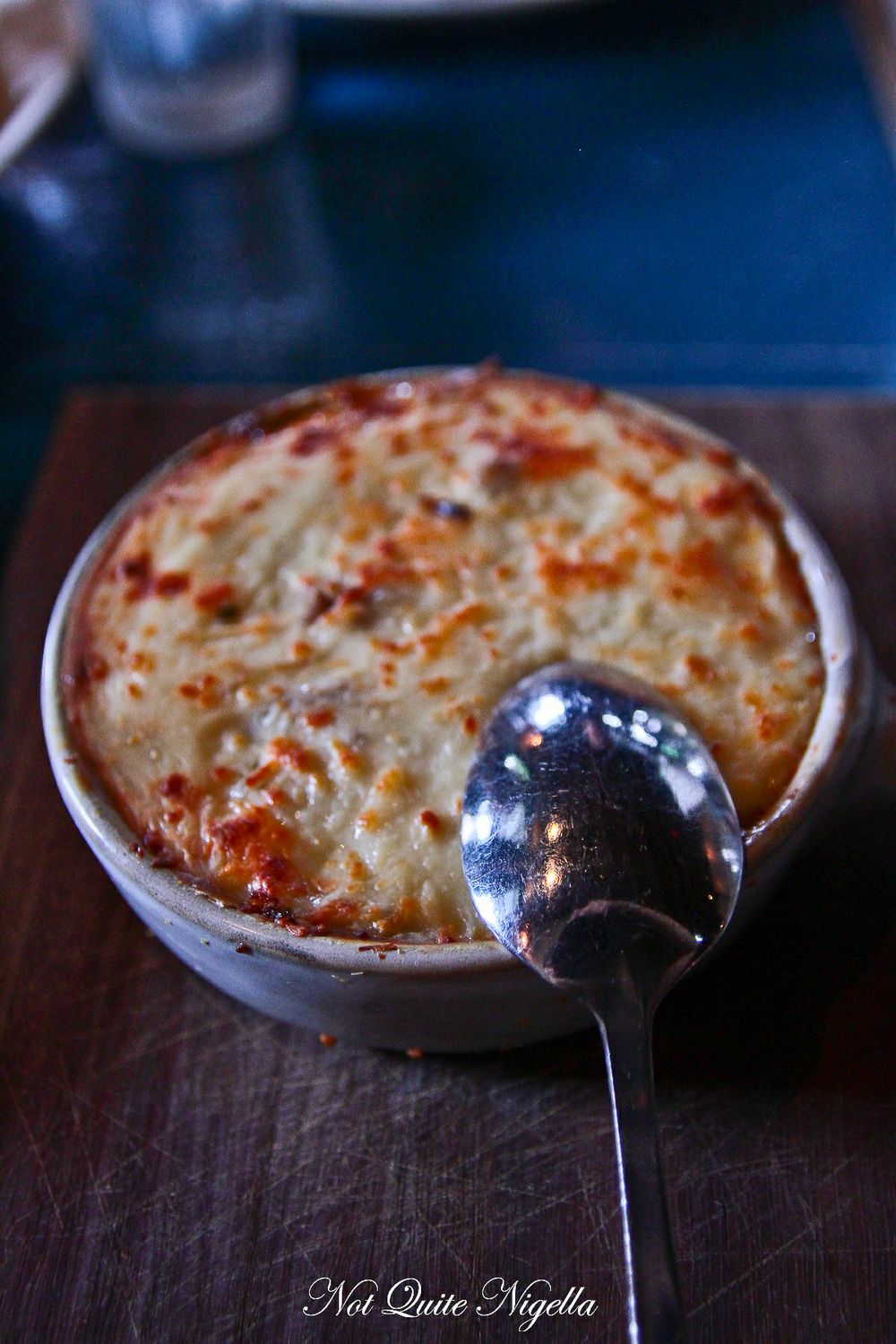 The moussaka is very generous with slow cooked shredded lamb. It's rich and unctuous and layered with bechamel on top and eggplant slices on the bottom. It's the kind of dish that I think really suits winter. 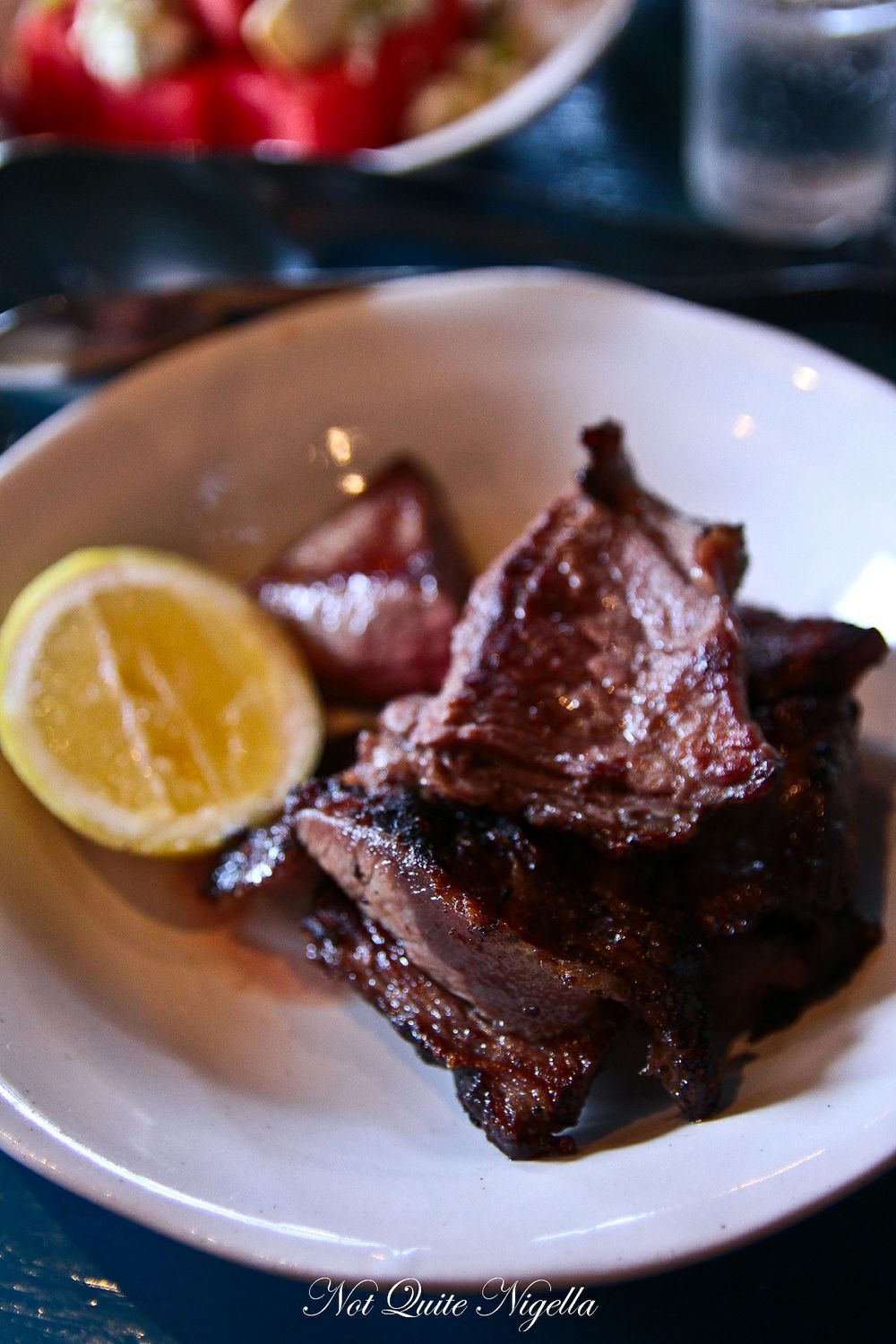 I was hoping for Greek lamb, I mean when you have Greek food, spit roasted lamb and lemon potatoes come to mind first. Instead, the spit item was Wagyu bolar blade. And try as I might, apart from the first bite, I just hit gristle at every turn and I try about four pieces before giving up. When the waitress asks us what we thought of it and we told her that we enjoyed everything but this dish and showed her the bits that were inedible she seemed a bit lost for words and just offered to take the dish away. If any of us were up for it, we would have asked for the dish to be taken off the bill as there was just so much that we couldn't eat but I don't think any of us were in the mood to discuss it. 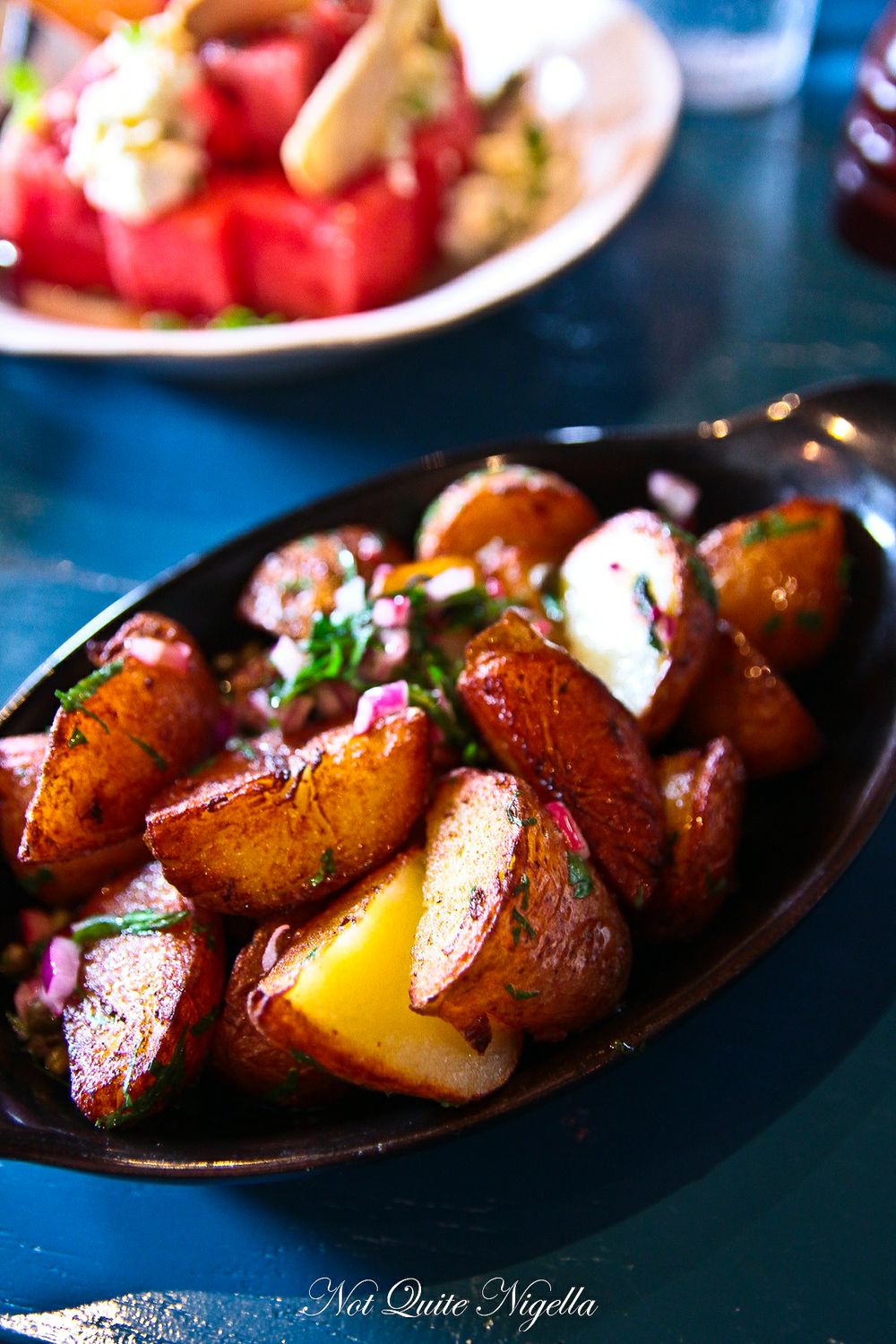 Said to be cooked backyard style these potatoes with a drizzling of red onion, lemon and capers were moreish  and were the meat more easily eaten, they would have been perfect partners. 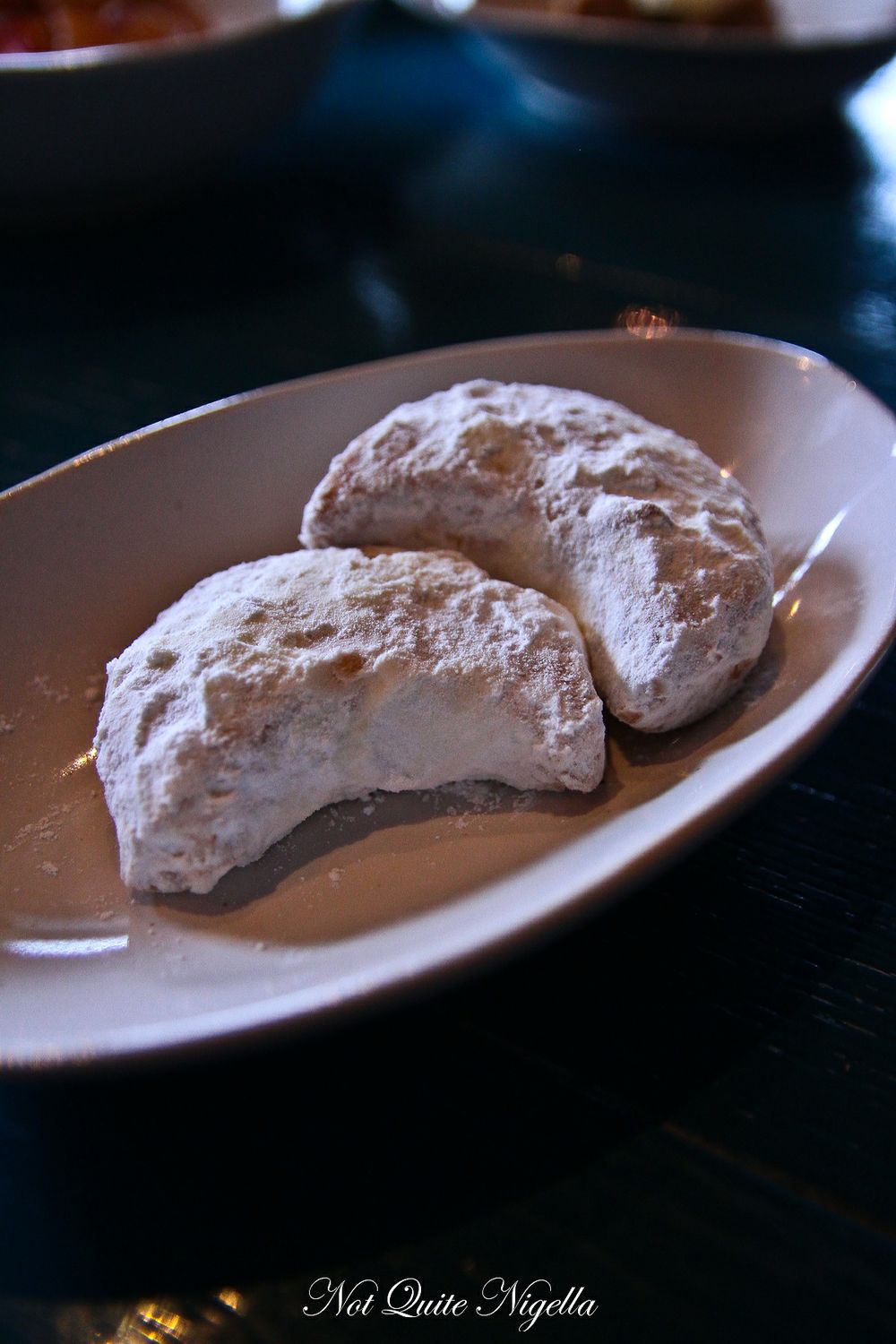 I'll have to admit, I grew up with a neighbour whose mum made the best almond shortbread biscuits. So I measure all against hers. I've come across a couple that are just as good and whilst the rest of the girls liked these, I still think that Felicity's mum makes the best ones ;) 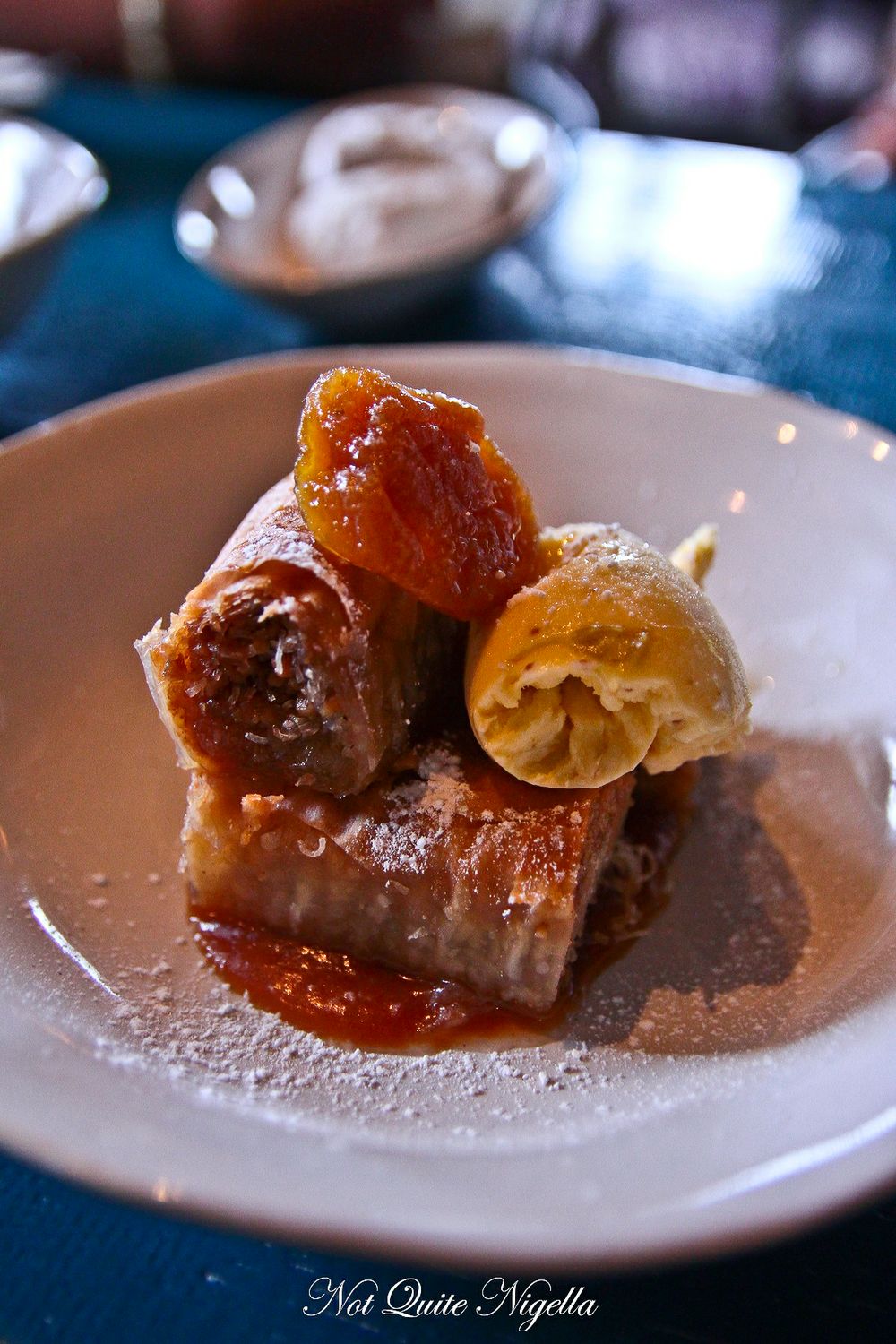 The baklava rolls are strong in cinnamon, a little too strong as you don't really get the nuts and honey, and the pastry isn't as crisp as you'd like. It's served with a thick fig cream, a dried fig and a layer of salted caramel, the latter which was nice but I don't know if you needed it given how sweet baklava is. 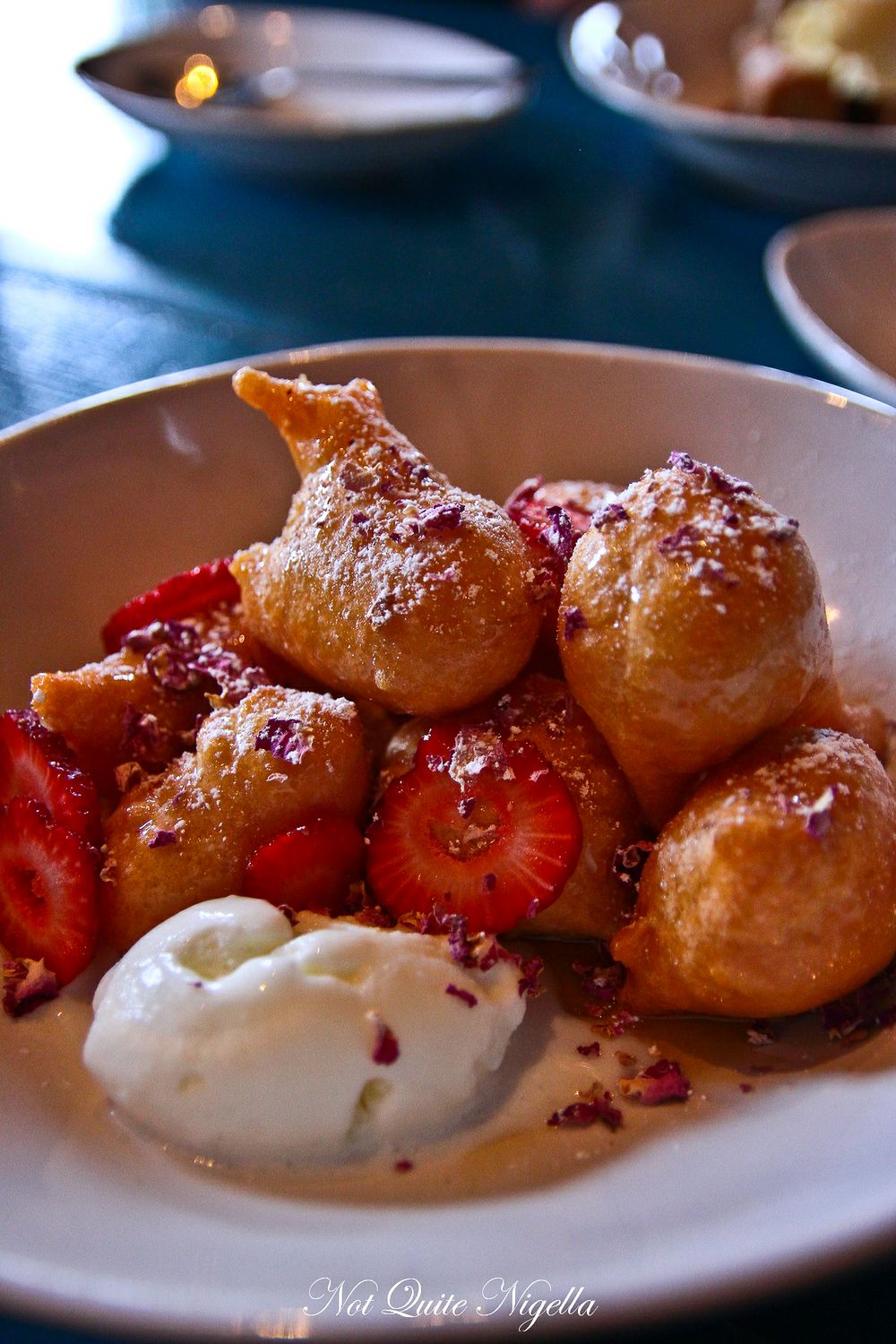 We were recommended these by our waitress and they come out in a generous serve. They're  a bit tough to eat, quite different from regular donuts. We're told the honey and herbs are from the rooftop garden area. It comes with strawberries, yoghurt ice-cream and rose petals and the yogurt ice cream is my favourite component with just the right amount of sweetness and tartness.

The bill is reasonable, about $40 per person including tip. We've been too busy talking to notice that the time is up and once we do, we make a mad dash in our respective directions in the mad summer rain.

So tell me Dear Reader, have you ever asked for a dish to be taken off the bill? And do you ever speak up when something isn't to your satisfaction or do you prefer not to say anything? 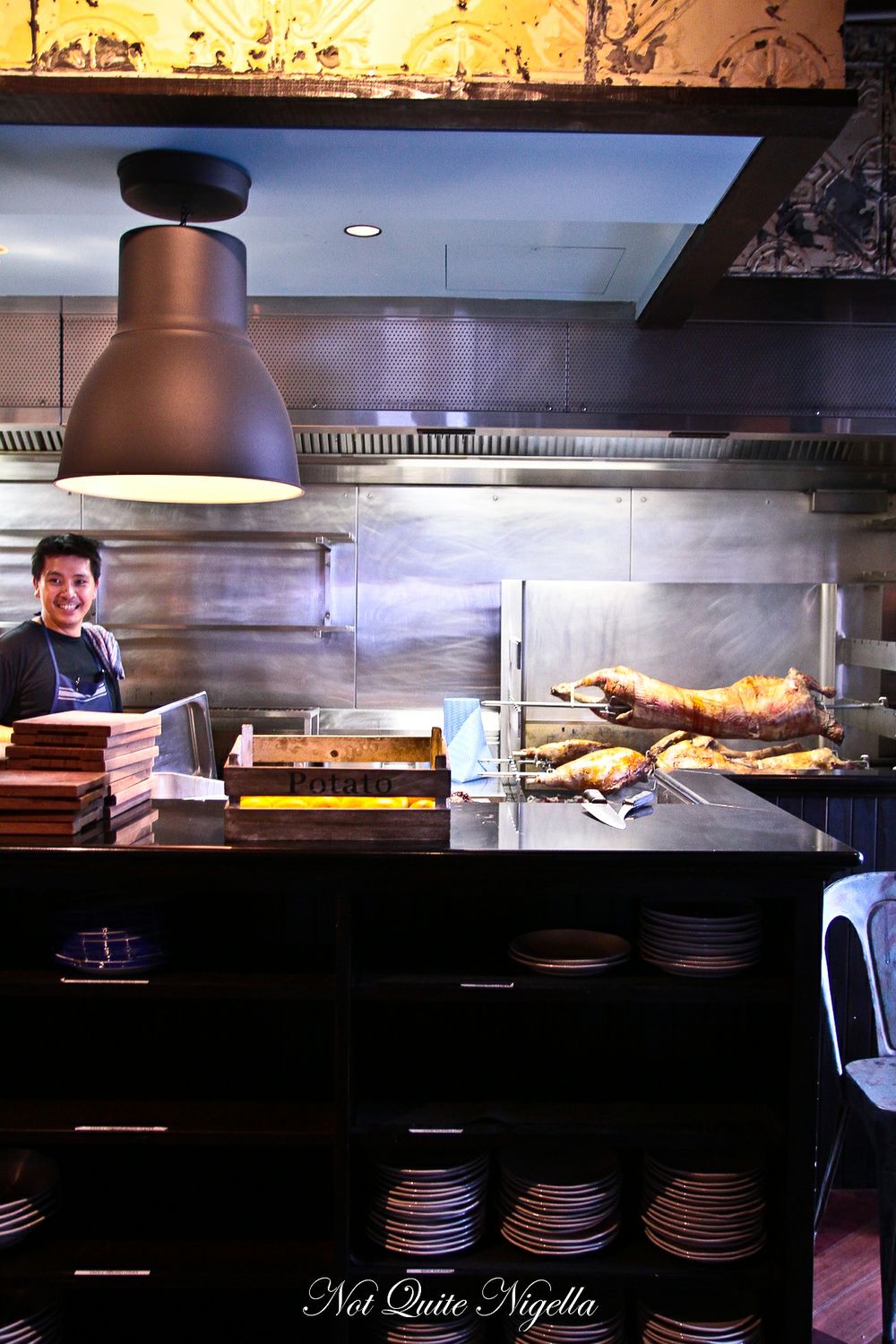 Open 7 days from Noon until late 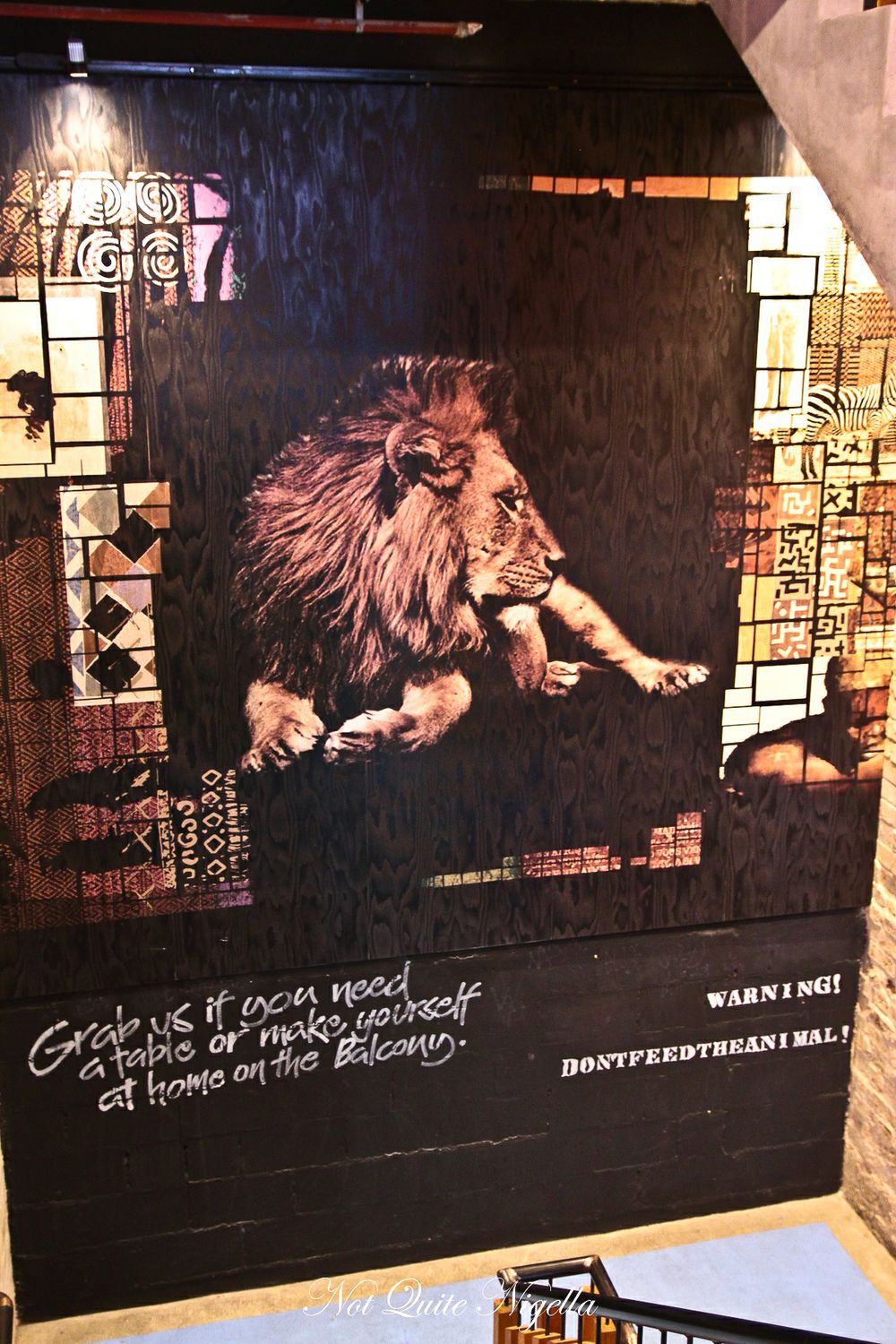