Four Easy Soups To Get You Through Winter 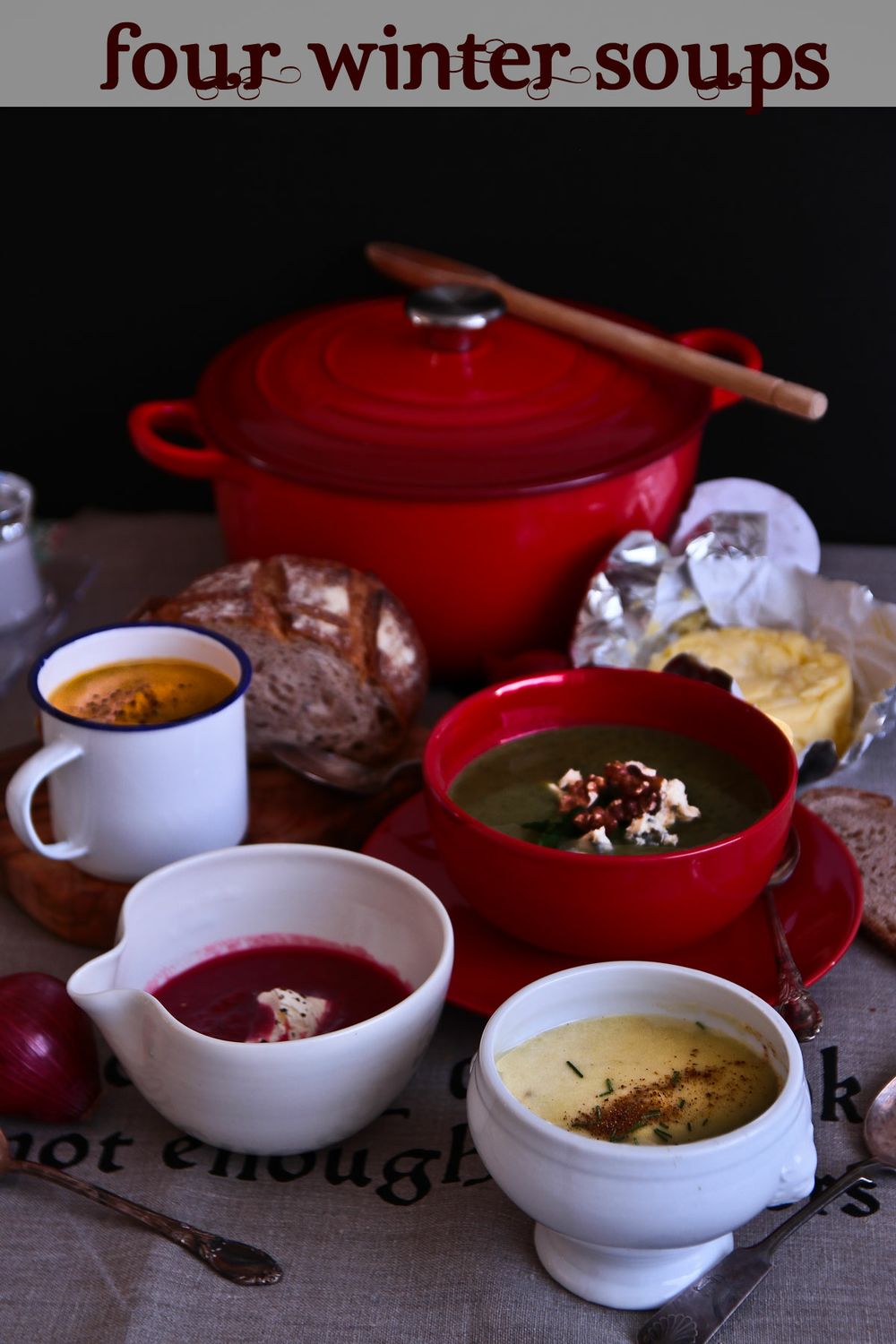 I used to be wary of beautiful people. I make all sorts of assumptions about them, mostly that they probably wouldn't be interested in having a conversation with something that wasn't as perfect as they are. When I was at university I worked at a market research company where I first met my friends Queen Viv and Miss America. One day an absolutely gorgeous young man walked in and everyone's heads swivelled around and their jaws dropped. Men and women fell in love with him. He kept to himself, his luminous blue eyes downturned most of the time. I guess he was shy, something that we later realised. But many of us assumed that he just couldn't be bothered with us. He was just too beautiful.

Queen Viv is one of those people that doesn't really give a hoot about that sort of thing. She will walk up to someone if they look interesting and start talking to them no matter what they look like. She befriended Alex, insofar as someone could as he was a shy soul, and one reward was that he furnished her with his family recipe for borscht beetroot soup. 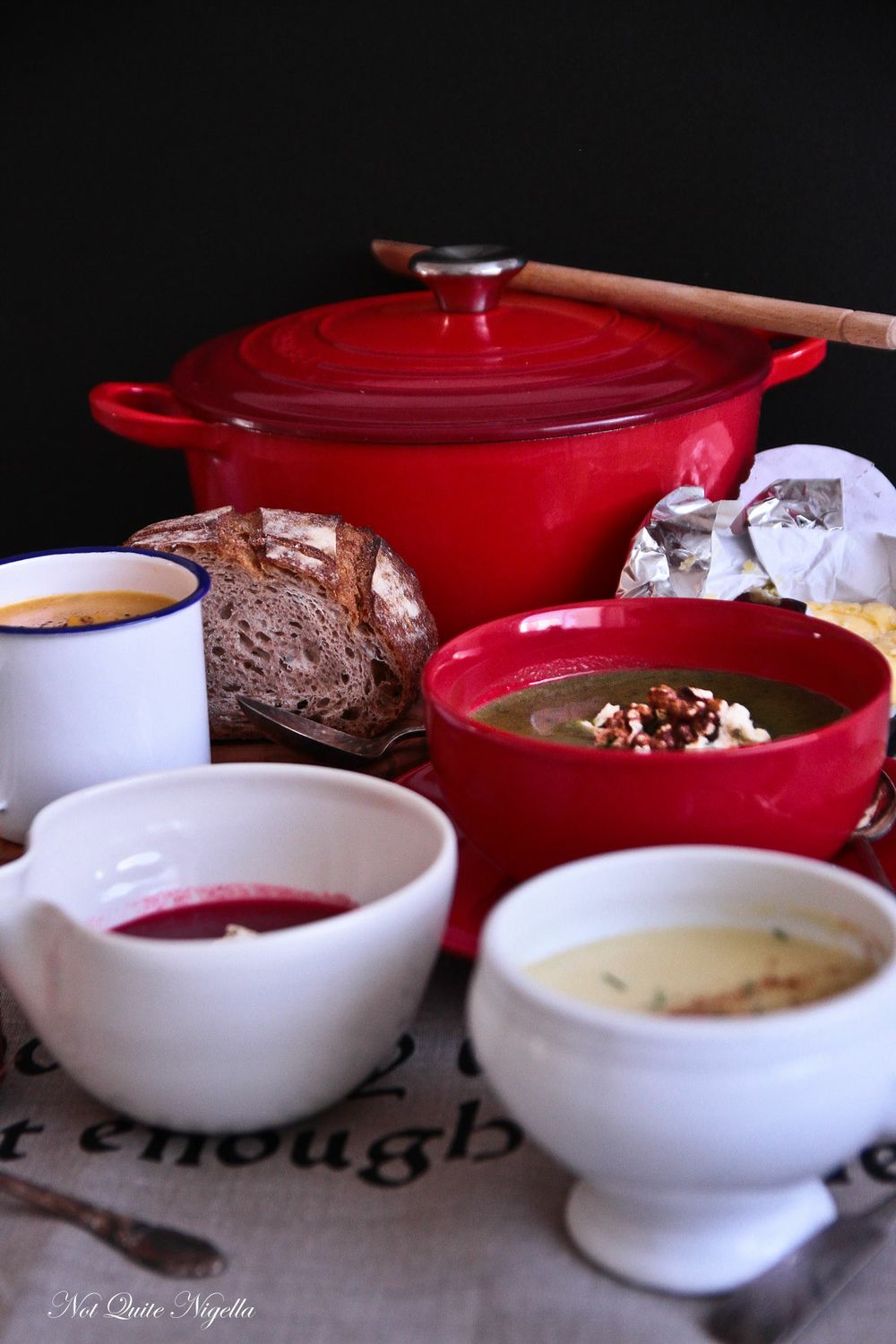 While she lost contact with him, she still remembers him fondly through this recipe. Soups have that effect on you. They offer you warmth when you are cold and are great to make in vast quantities and freeze. When you rush in from the cold reheating a creamy soup seems like the best way to stave off the winter chills. Whenever people would ask what I was doing the other week, the answer was invariably "I'm making soup." So I offer you four soup recipes, all very simple but quite different from each other, in an effort to stay warm.

I've since revised my opinion of beautiful people because some of the most beautiful people are just as lovely on the inside as well as out. Some I've learned are just shy like the rest of us and some also hold wonderful family recipes. The four recipes start with Alex's borscht beetroot soup which is full of wonderful winter vegetables and is finished off with a swirl of sour cream (non negotiable unless you are dairy intolerant because it adds so much to the soup). I also give a recipe for Vichyssoise, the rich and creamy French and leek soup served cold although you can bet we served it hot (where it tastes like buttery mashed potato). Third is one of my favourite soups, a broccoli and baby spinach soup which is hussied up with the addition of blue cheese and crunchy roasted walnuts as croutons. Lastly is a creamy, easy pumpkin soup where you let the oven do most of the work for you.

So tell me Dear Reader, do you eat soups as a whole meal or a starter to a meal and then you eat something more substantial afterwards? And what was the last soup that you made or ate? 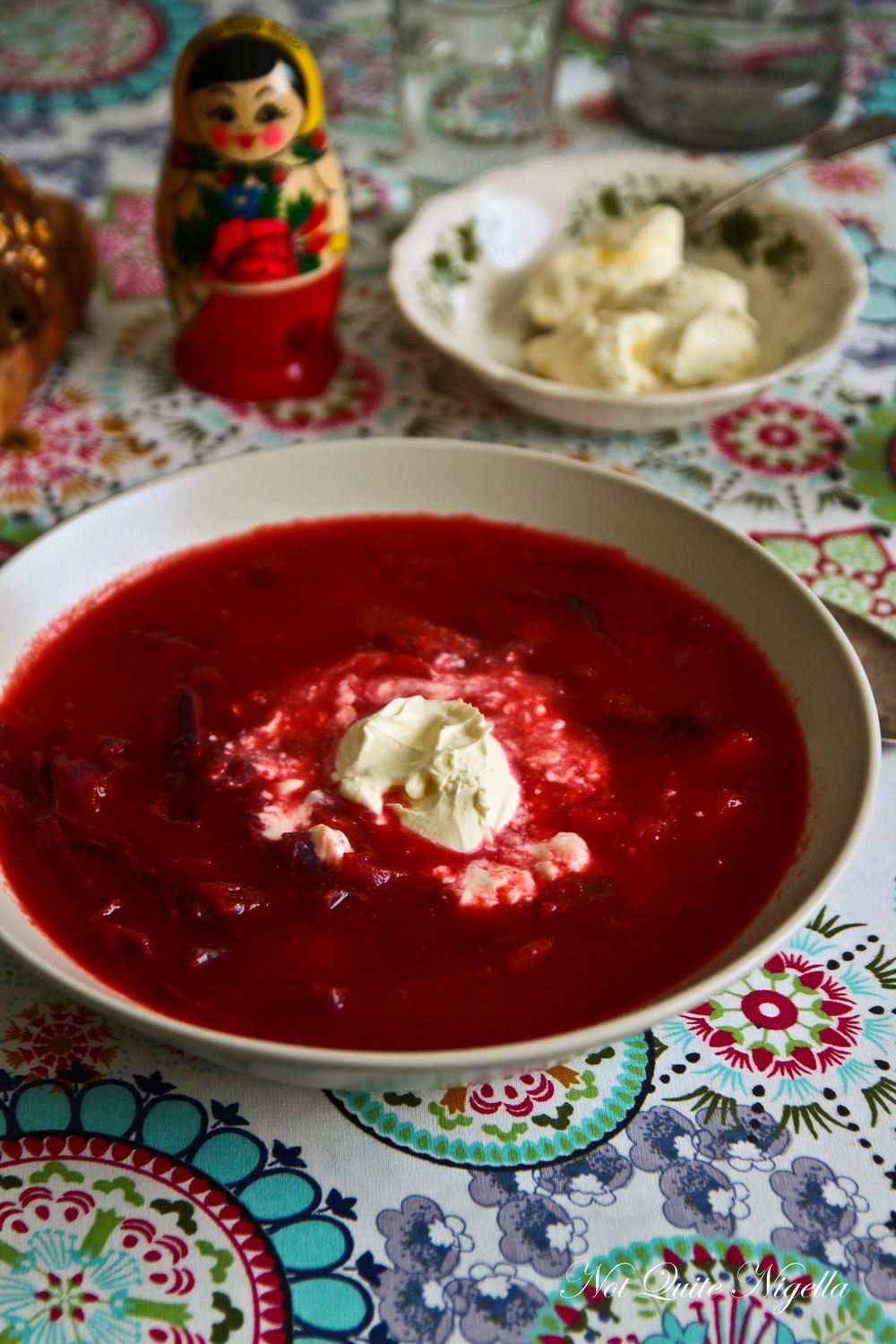 This recipe is based on Alex's but I adapted this to be similar to the borscht that I ate growing up with a Russian best friend. Her mother's borscht had a wonderful texture from the red cabbage and potatoes. If you want a smooth soup, you could blitz the whole thing. The wonderful thing about it is that it is packed with vegetables and with the exception of the sour cream (and absolutely use low fat if you want to), there is no fat or oil added. It makes use of fantastic winter vegetables and makes an enormous amount of it-enough to freeze or to provide soup for lunch for the next few days. I don't want to be fussy but I really don't eat this unless there is sour cream in it. It's just a wonderful ingredient and adds so much to the soup balancing the flavours of the rest of the vegetables. 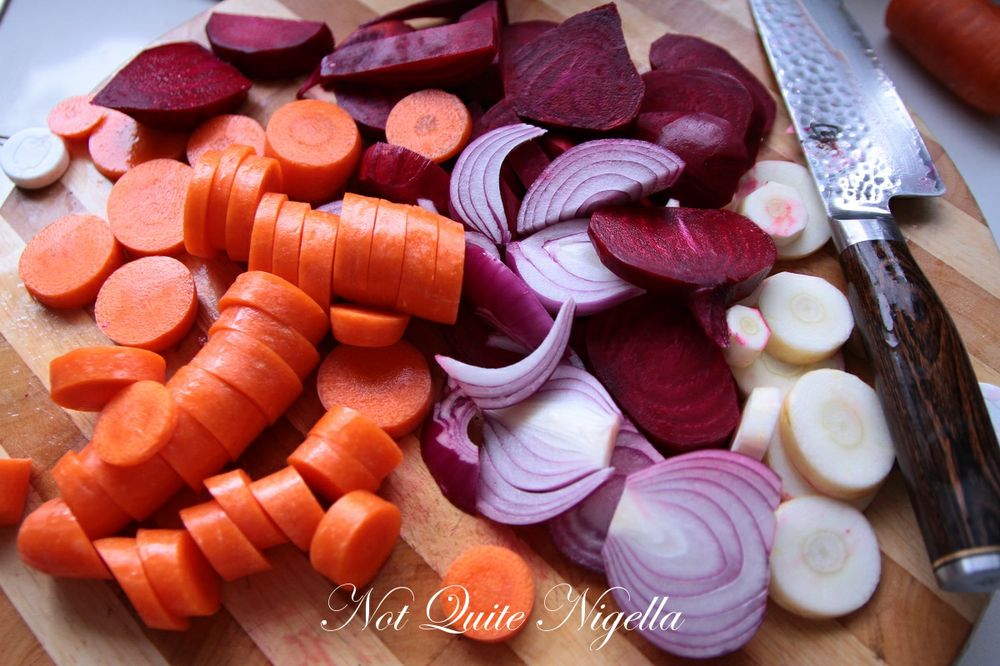 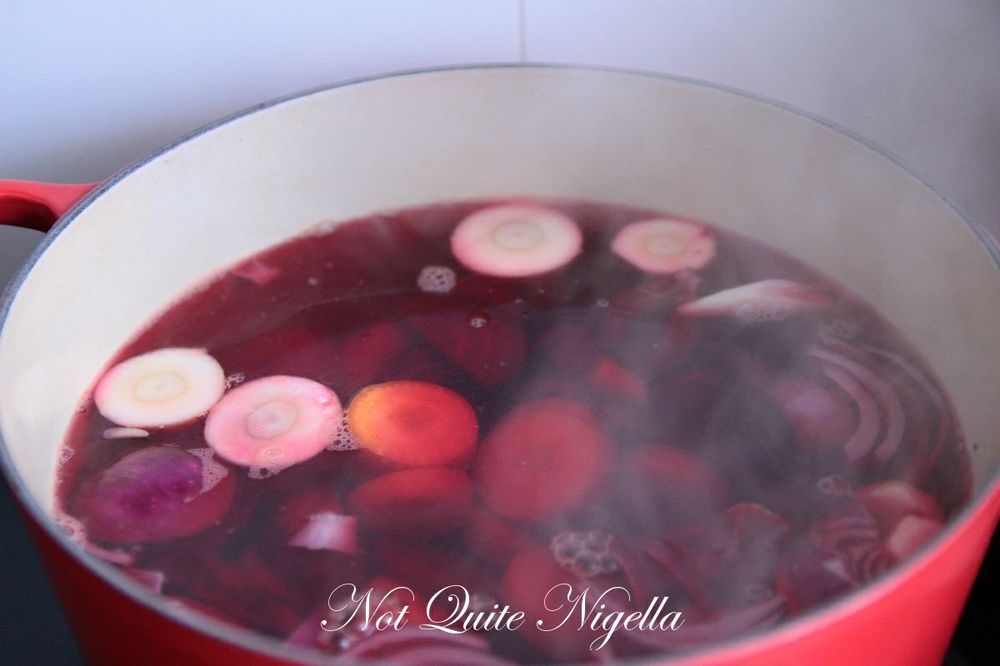 Step 1 - In a large pot, add the water, onion, carrots, beetroots and parsnip. Simmer for 40 minutes. Blitz with an immersion blender until smooth. 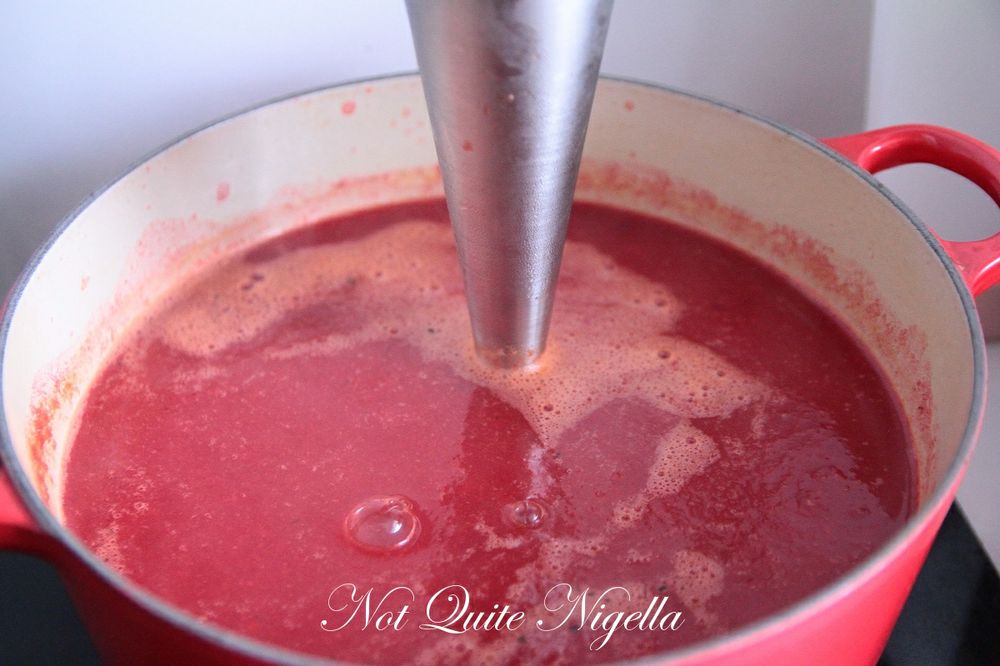 Step 2 - Add the red cabbage, potatoes and tomato puree and season with salt and pepper to taste. Simmer for 20 minutes and serve with sour cream and sprigs of dill, if using. 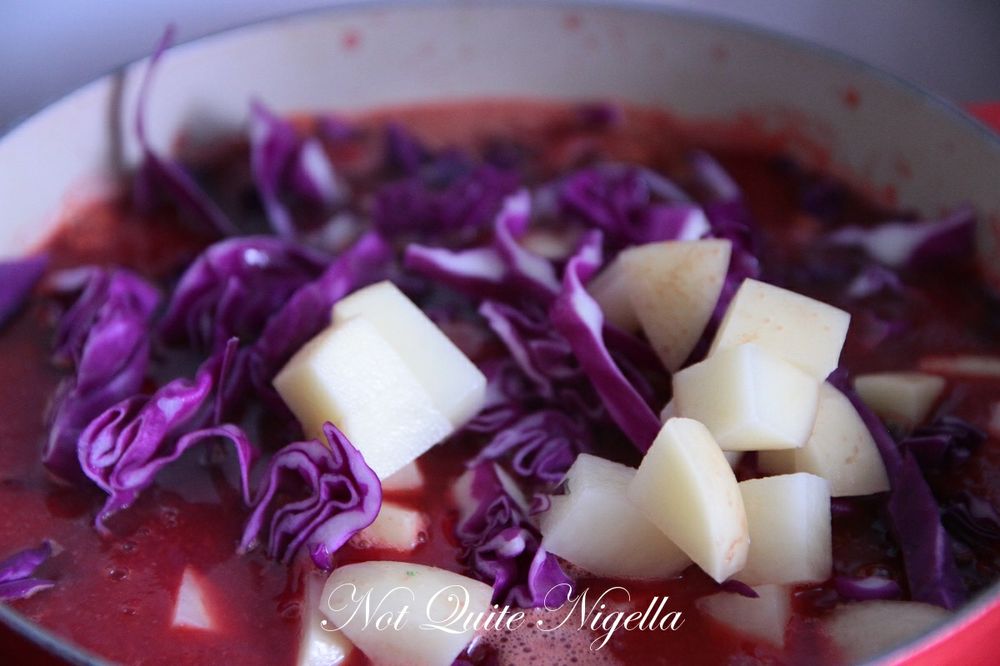 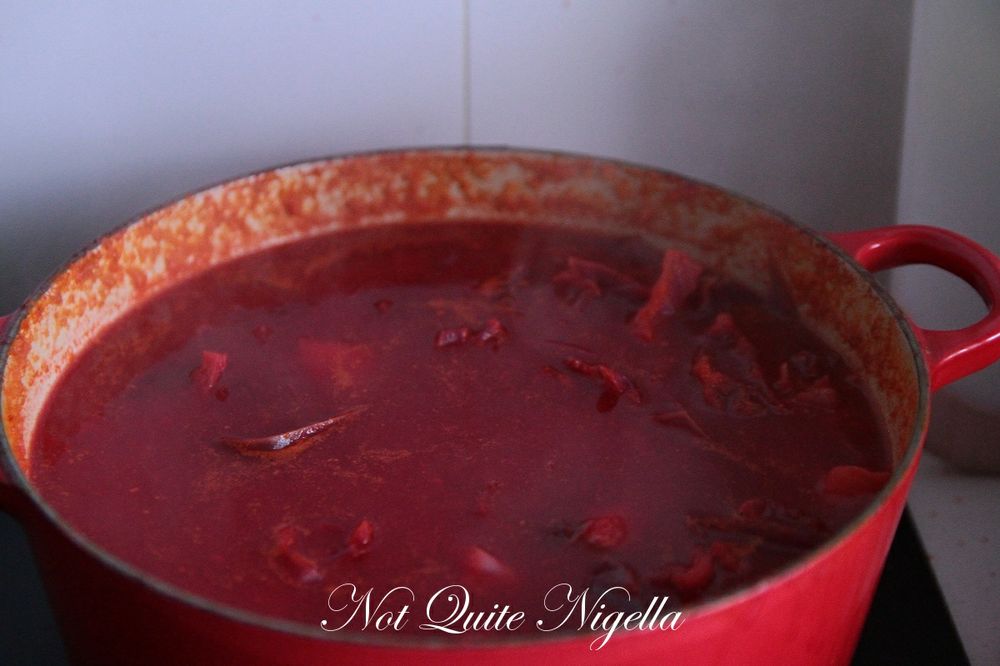 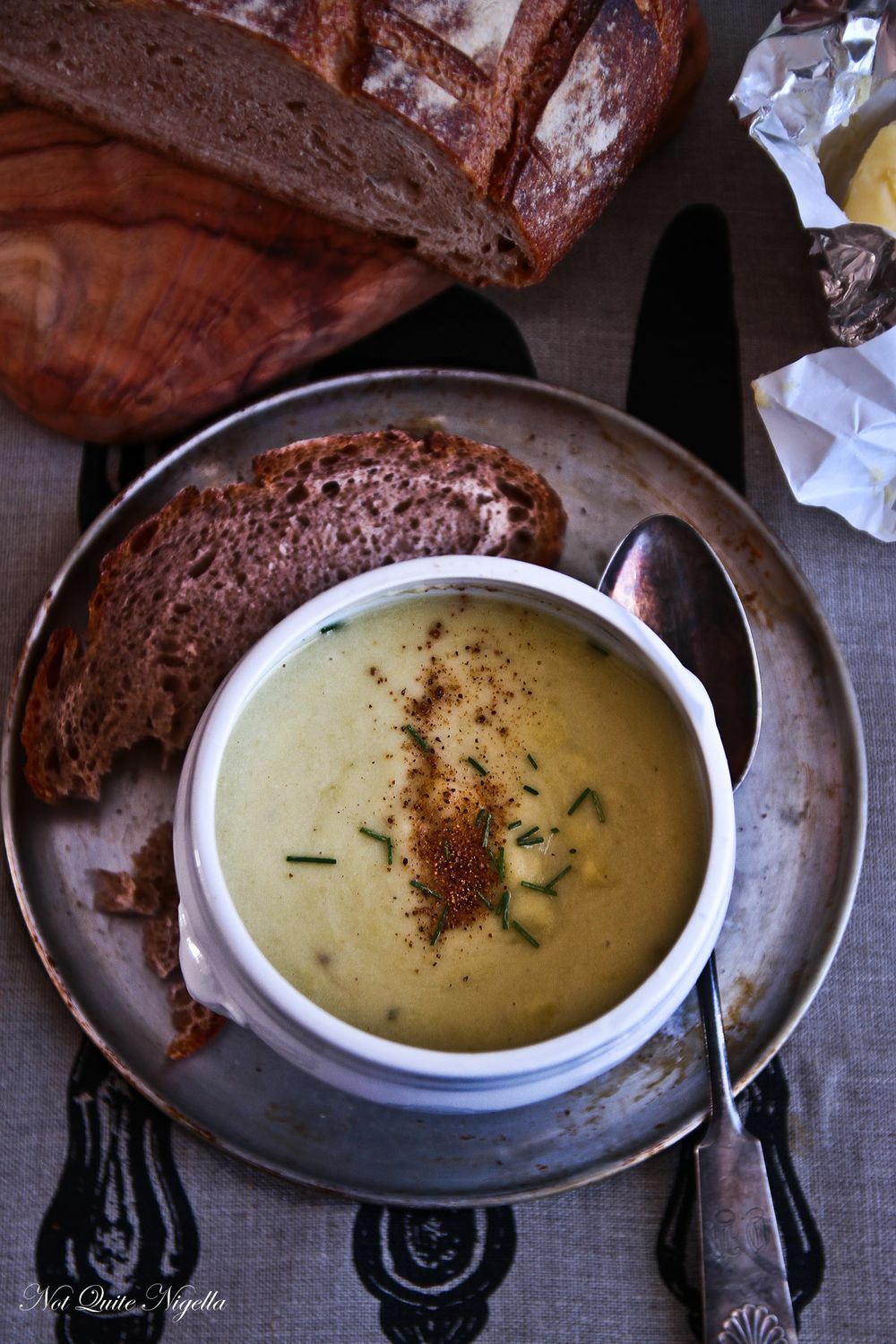 OK is it silly to put up a recipe for a cold soup during Winter? Northern Hemisphere readers may be sweltering over an air conditioner while we huddle in front of the heater with fur lined boots so this is for both hemispheres waiting for the moderate Spring and Autumn months to come about. Vichyssoise is a French potato and leek soup that is usually served cold but is just as delicious served warm. Out of all of the soups, Mr NQN loved this one the most. 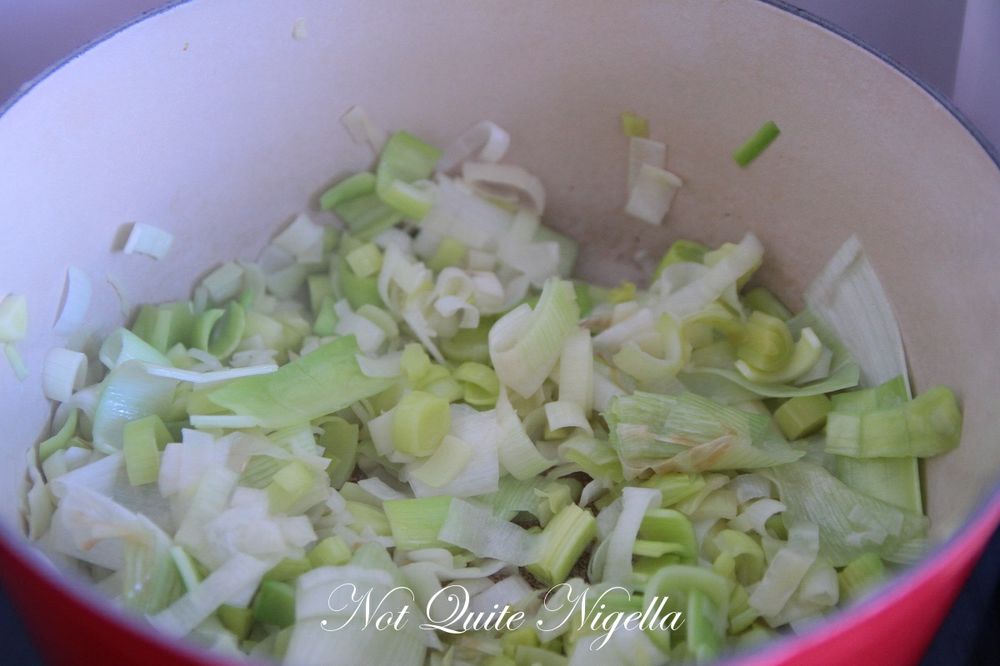 Step 1 - In a large pot, on low heat sweat the leeks in the butter for about 15 minutes-make sure they don't caramelise but they must be softened. 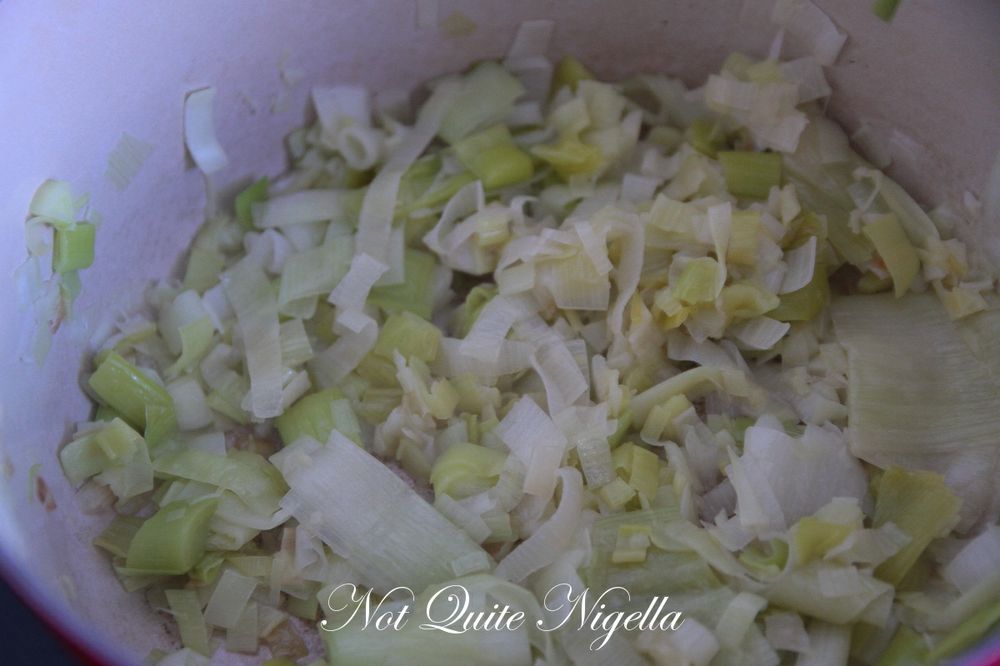 Step 2 - Add the  potatoes and stock and simmer for 25 minutes. Cool slightly and then using an immersion or stick blender, blend the soup until smooth. Add the cream, salt, pepper and nutmeg and allow to cool and then chill. Serve chilled (or this is lovely served warm too). 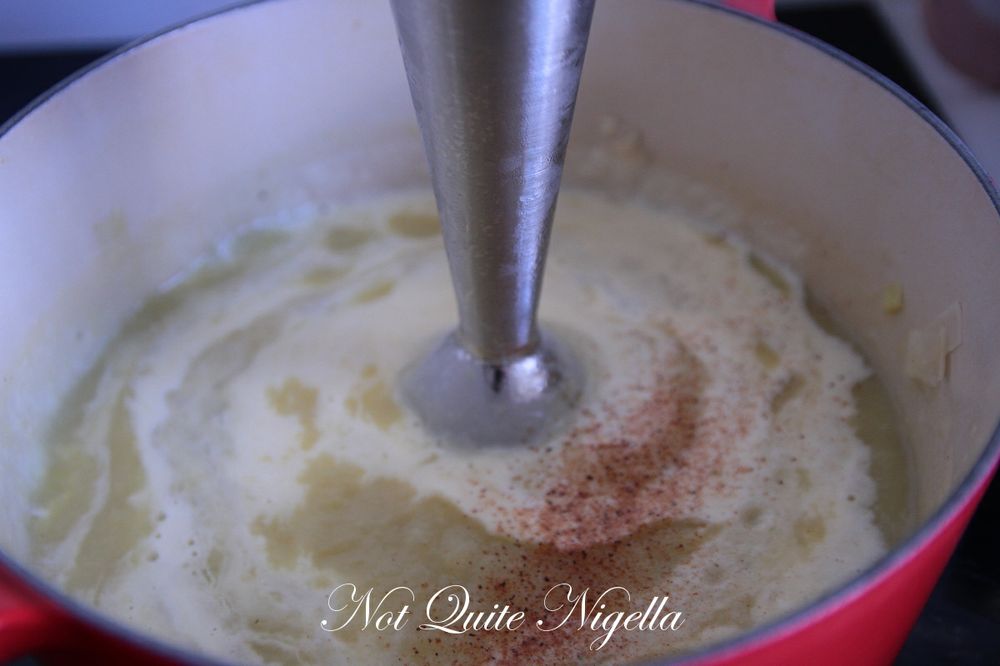 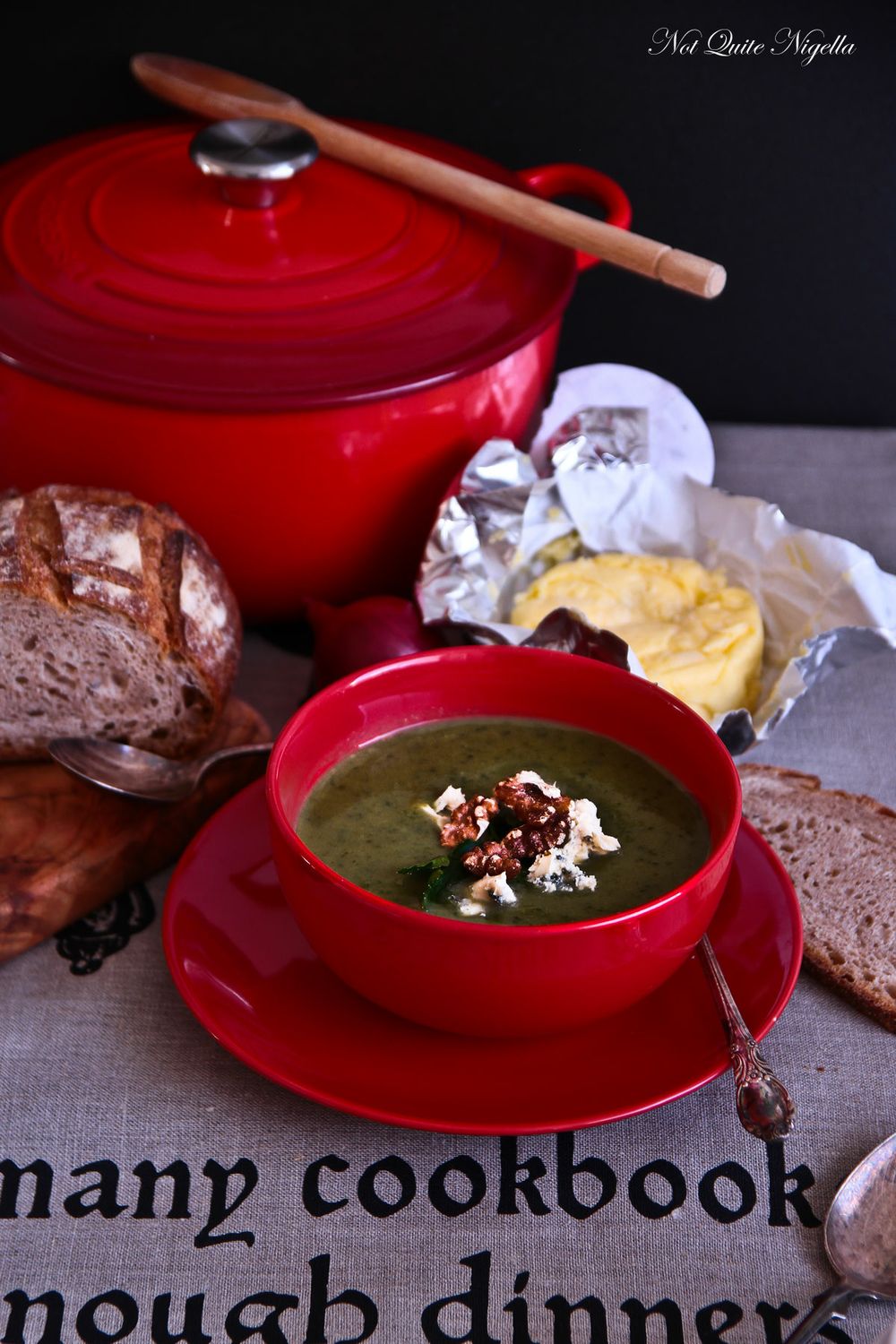 I'm a complete broccoli and baby spinach freak. So much so that if I had that blood clot condition that meant that I couldn't eat green leafy vegetables, I would crave them as I do cake. I know it's perverse and this may have rendered my opinion somewhat invalid. I enjoyed this soup without the blue cheese and toasted walnut croutons but adding those means that you can serve this at a dinner party or to friends that like things a bit fancy. 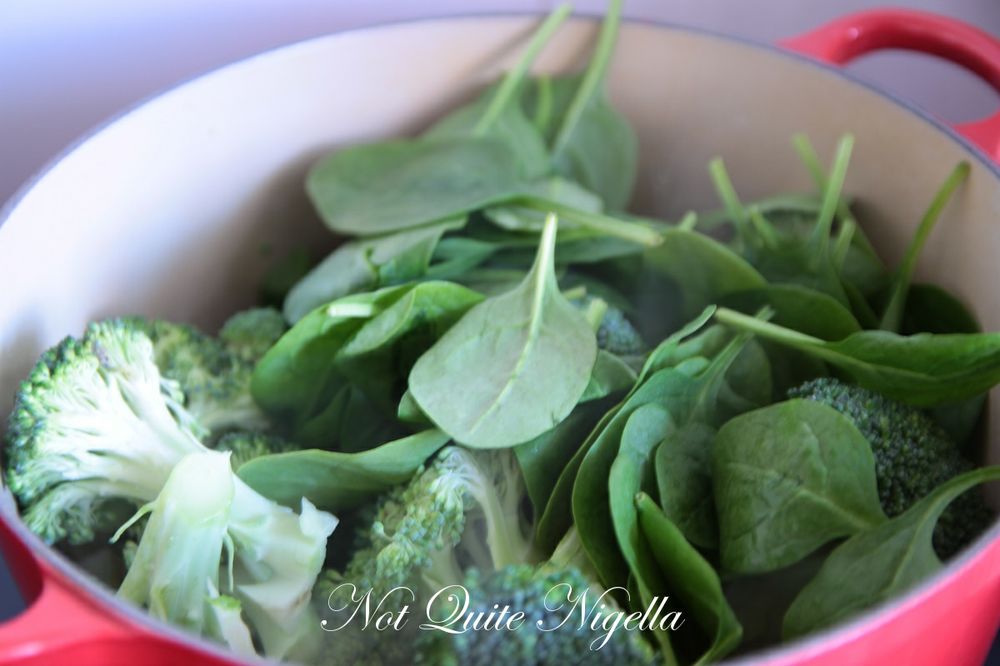 Step 1 - In a large pot, saute the onion in oil on medium heat. Add the potato, broccoli, spinach and vegetable stock and simmer for 25 minutes until vegetables are soft. Blitz until smooth with an immersion or stick blender. 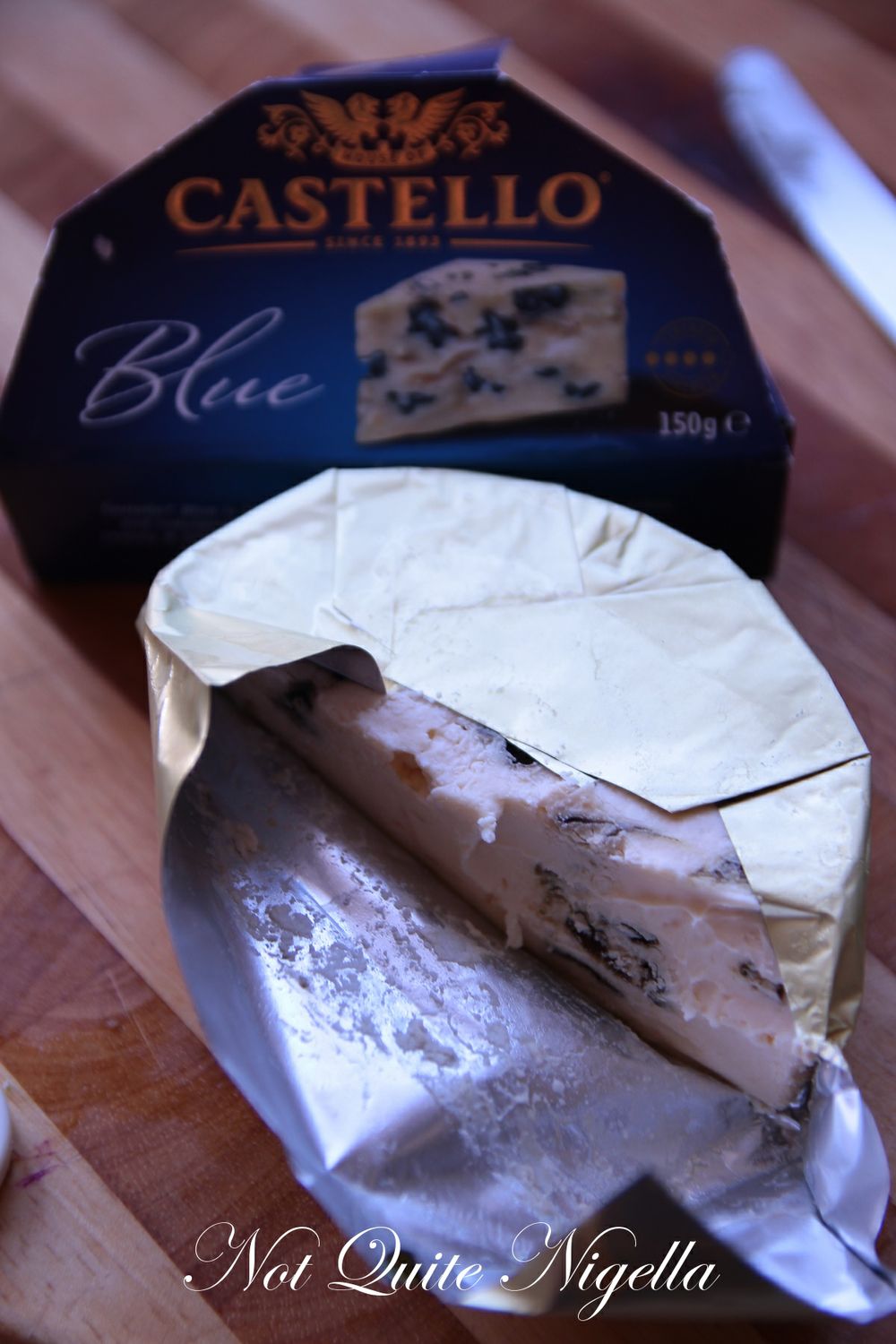 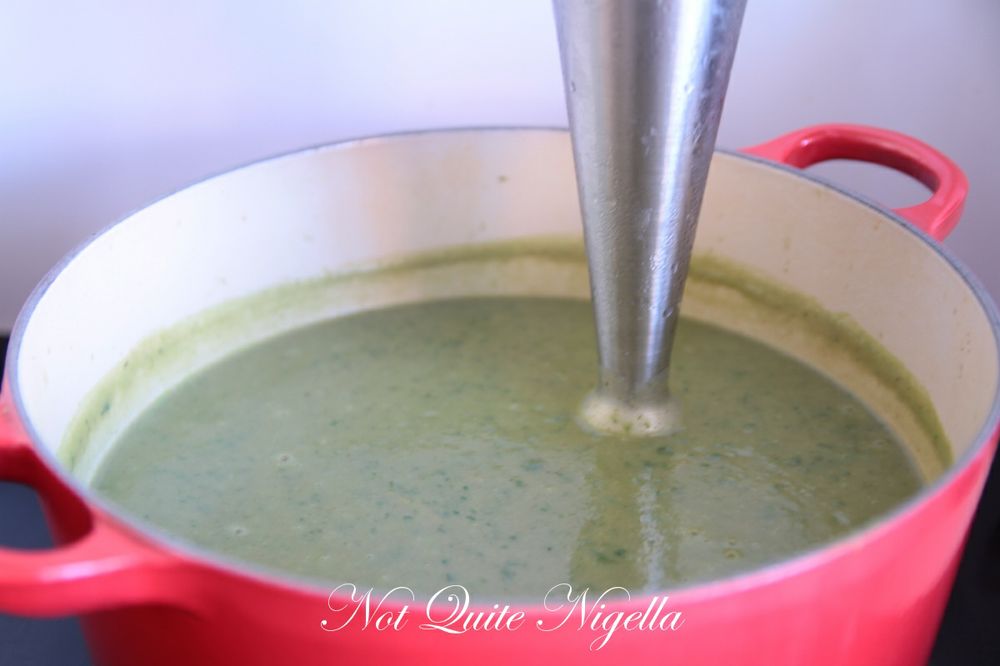 Step 2 - Meanwhile, roast walnut pieces in a 180C/350F oven for 10 minutes to make them crunchy like croutons. Ladle soup into bowls and sprinkle with blue cheese and walnut "croutons". 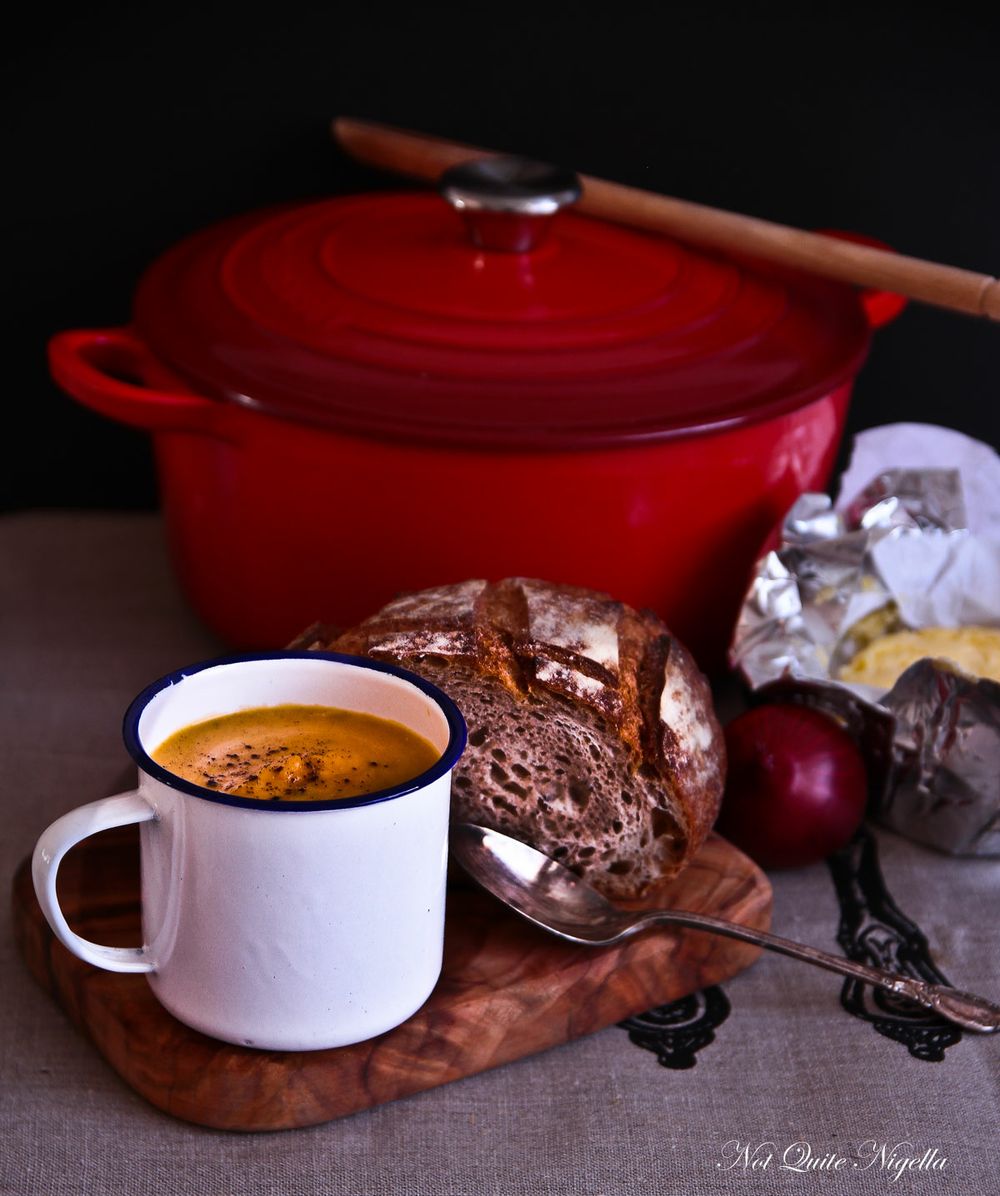 Australians are somewhat obsessed with pumpkin soup. This is apparently different to the way that the British feel historically about pumpkins as they were traditionally used to feed pigs and livestock. The idea of eating pumpkin to many Brits is not second nature like it is to us. This is the simplest pumpkin soup recipe I can think of and I keep whole butternuts in the kitchen and just bake them whole when I need them. There is no awkward peeling and cutting here and the baking tip actually comes from Mr NQN's mum Tuulikki. She used to feed Mr NQN and his siblings whole cabbages for dinner where each child would break off a leaf and eat it raw. Hail to the queen of shortcuts in cooking!

Step 1 - In an oven preheated to 180C/350F, roast the pumpkin whole for 1 hour until soft. Cool until able to touch and remove the seeds and skin, they should slip off.

Step 2 - In a pot, heat the stock and add pumpkin. Using an immersion or stick blender, blend the two together until smooth. Add the sour cream or cream and salt and pepper.