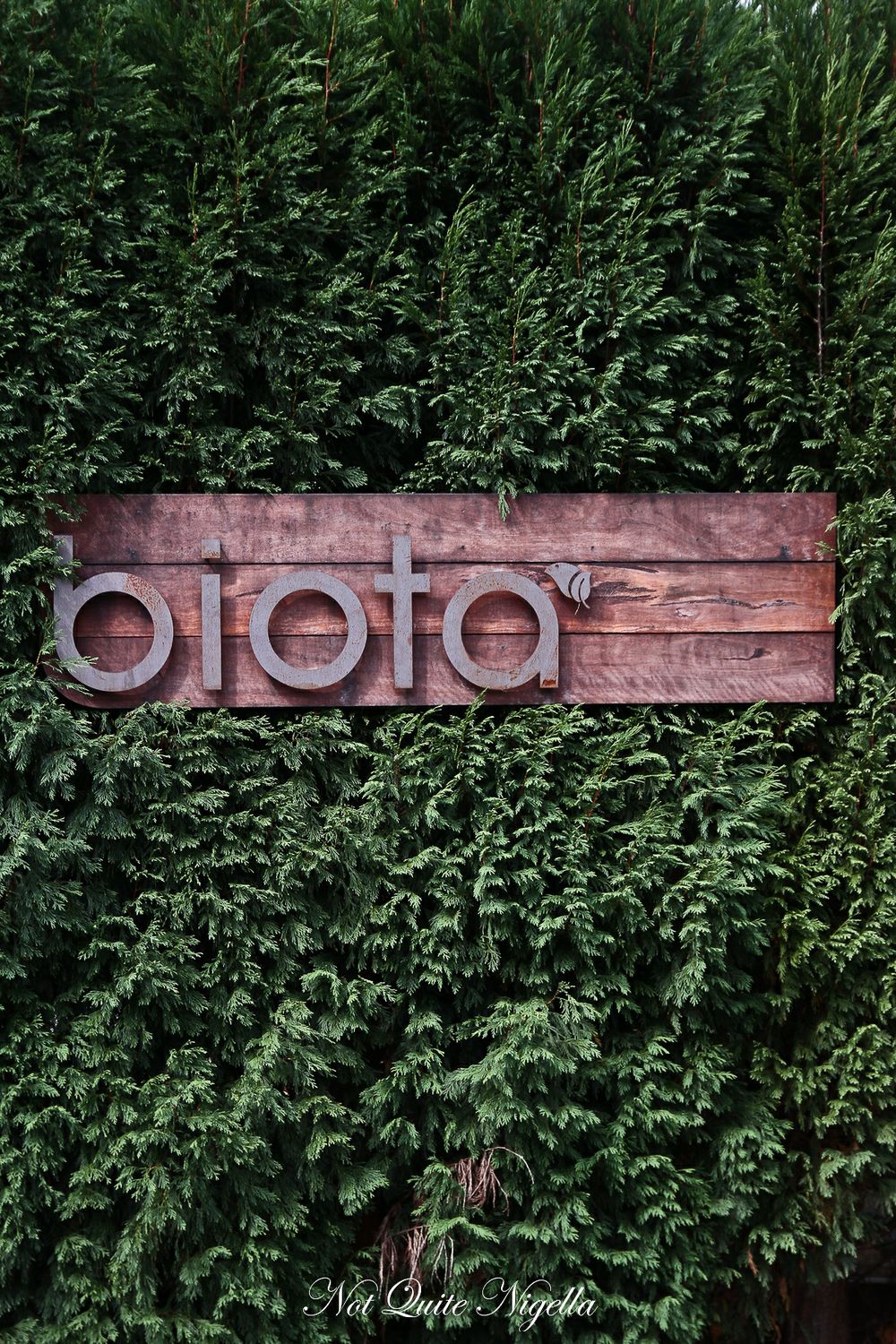 It used to be that only surgeons held metal instruments, concentrating on the task at hand below them, pulling down lights for better views with a qualified team behind them. A single word uttered was enough to tell their assistants and nurses what they needed before it was quickly handed to them. 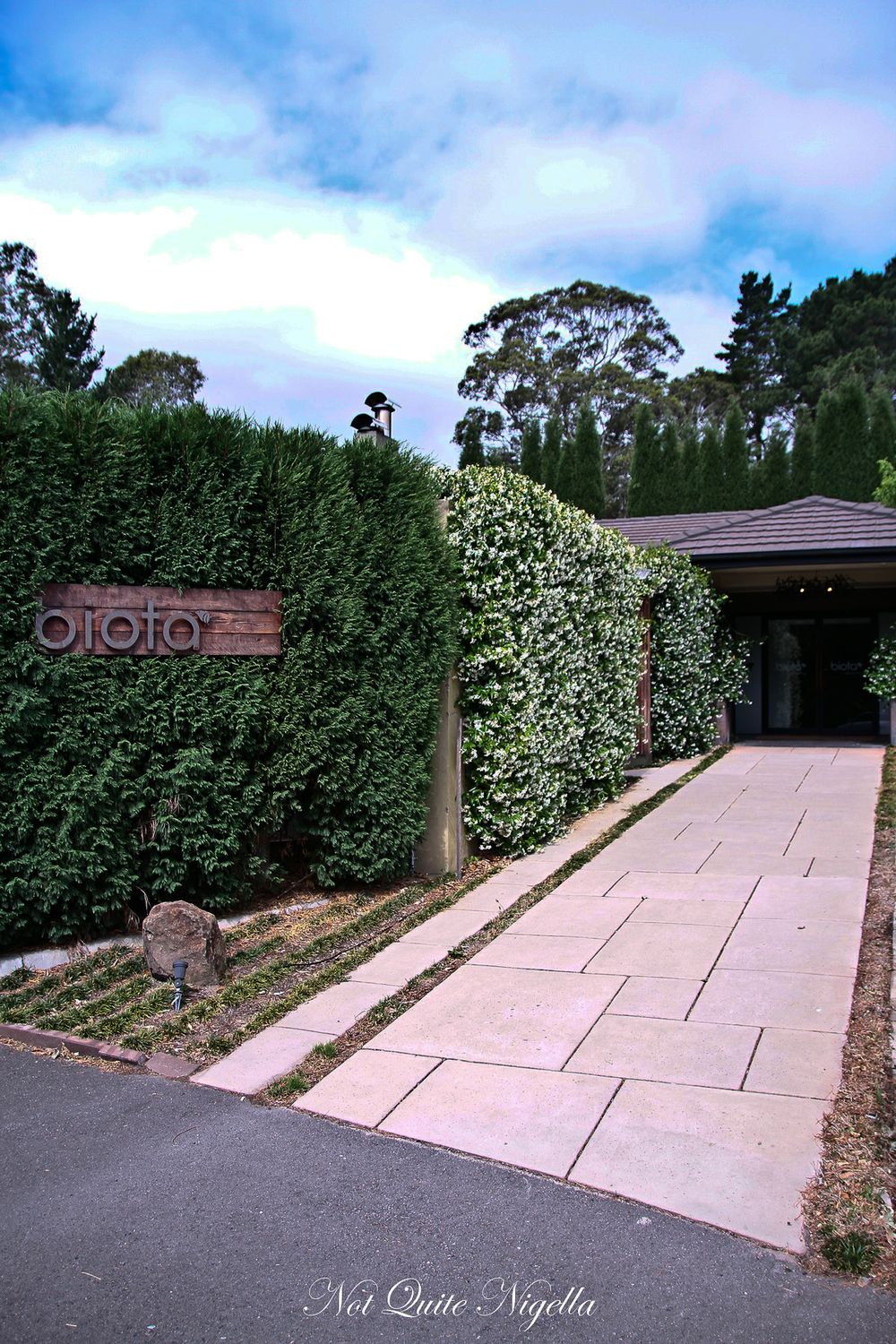 But not anymore as I sit in front of the open kitchen of Biota Dining watching chef James Viles and his team plating up food. The whole restaurant watches the concentration and how they place ingredients just so. Some hold tweezers, others carefully clean up plate edges and when the dish is ready, there's a soft clap to the staff to let them know that they've completed their operation...I mean dish. 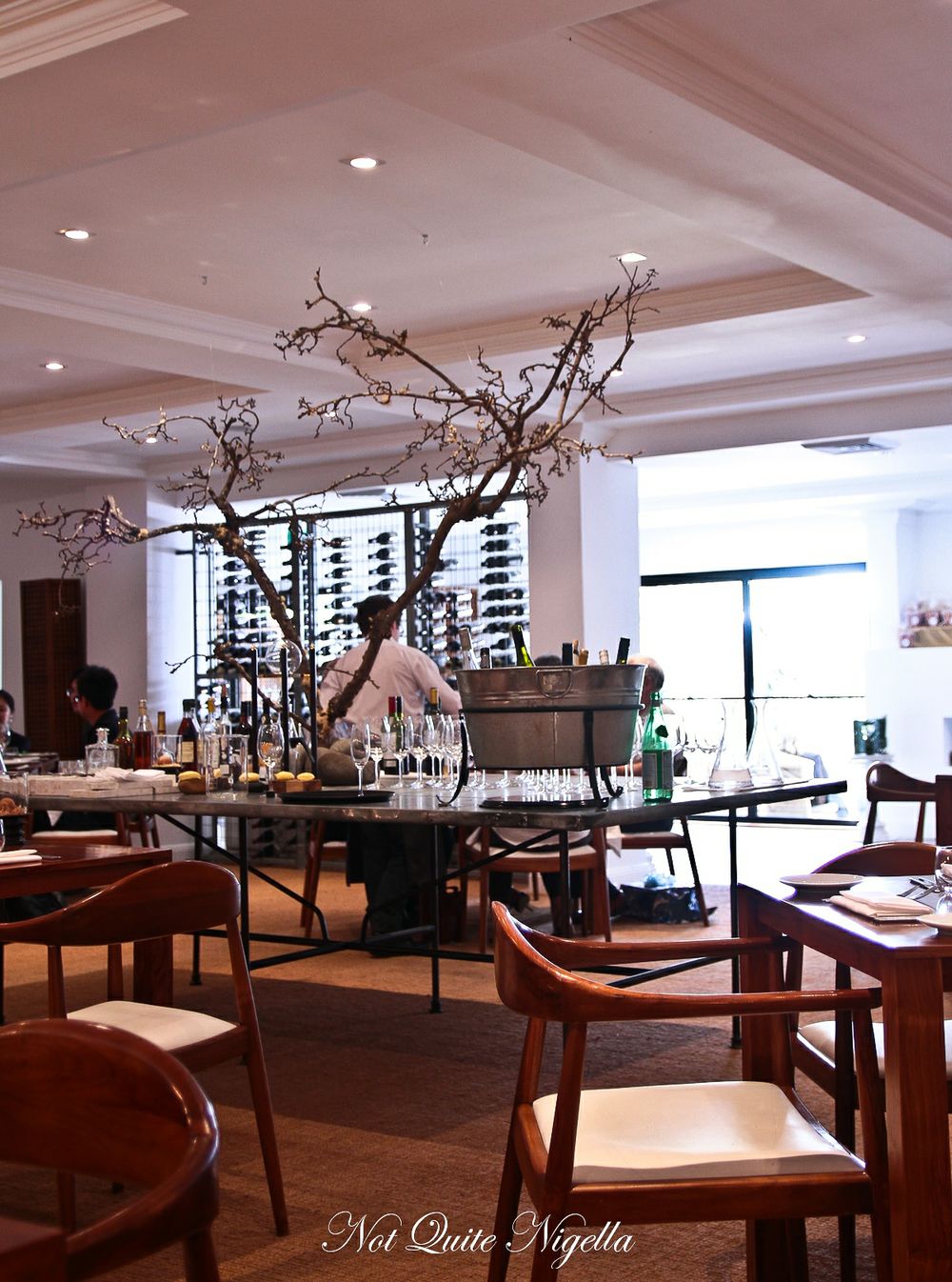 We're here at Biota Dining, on our way home from our weekend at Berry. The drive to Bowral from Berry is about one hour and to get from Bowral to Sydney after lunch, it takes about another hour. The space at Biota is beautifully verdant with Scandinavian touches. Divided into a more casual area, bar area and more formal dining room which sits right in front of the enormous open kitchen window, even diners that sit in a private room get a view of the kitchen antics via a flatscreen television (including a large poster of a girl's g-string clad torso covered in seaweed). It's also situated right next to a motel. 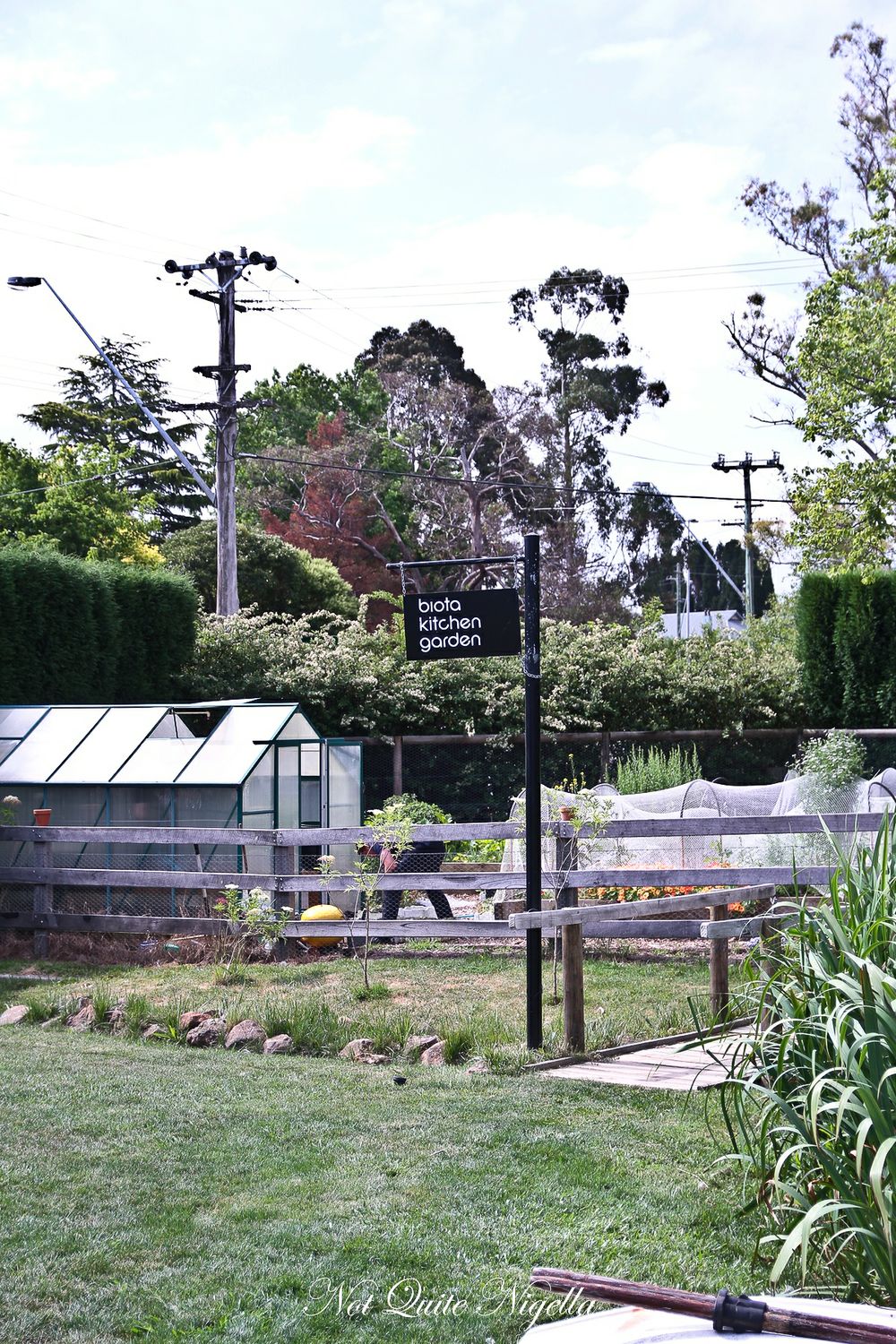 Outside there is a kitchen garden and about 60% of produce used is from the local area. On the last Sunday of every month, they hold a farmer's market where farmers through to home gardeners with excess produce can sell items. It started with 8 vendors and the last market featured 21 vendors. None of the vendors are charged to sell there. 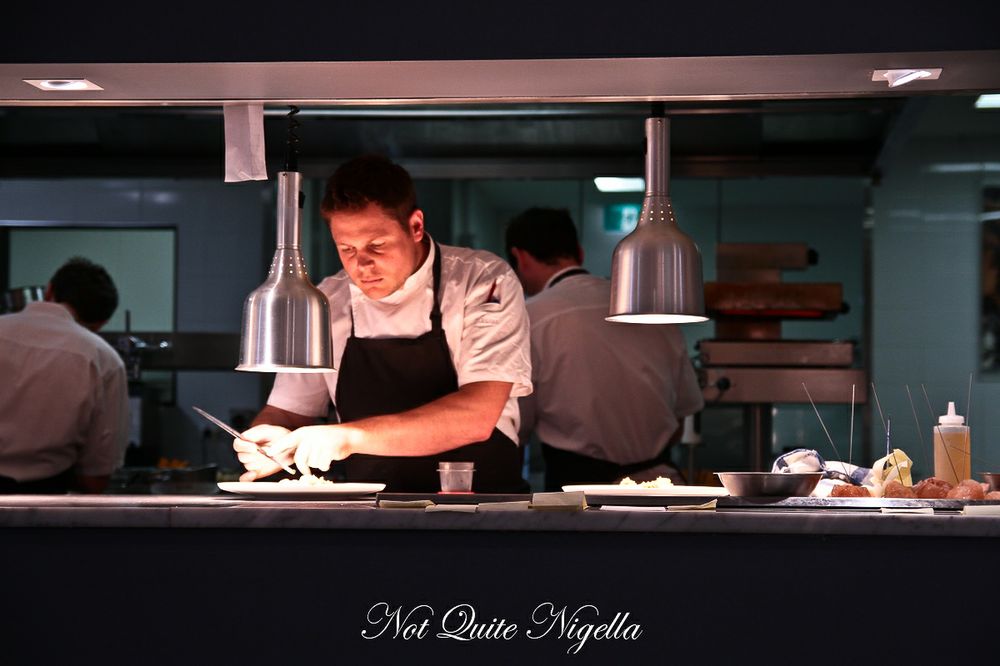 At the Biota restaurant, diners can choose from two courses ($46), four courses ($84) or chef's selection of seven courses at $124 per person which we chose or $188 with wine. Executive chef James Viles has worked around the world in the Middle East, London and Hong Kong and at young age of 23, he was awarded one chef's hat. Biota Dining now has two chef's hats. 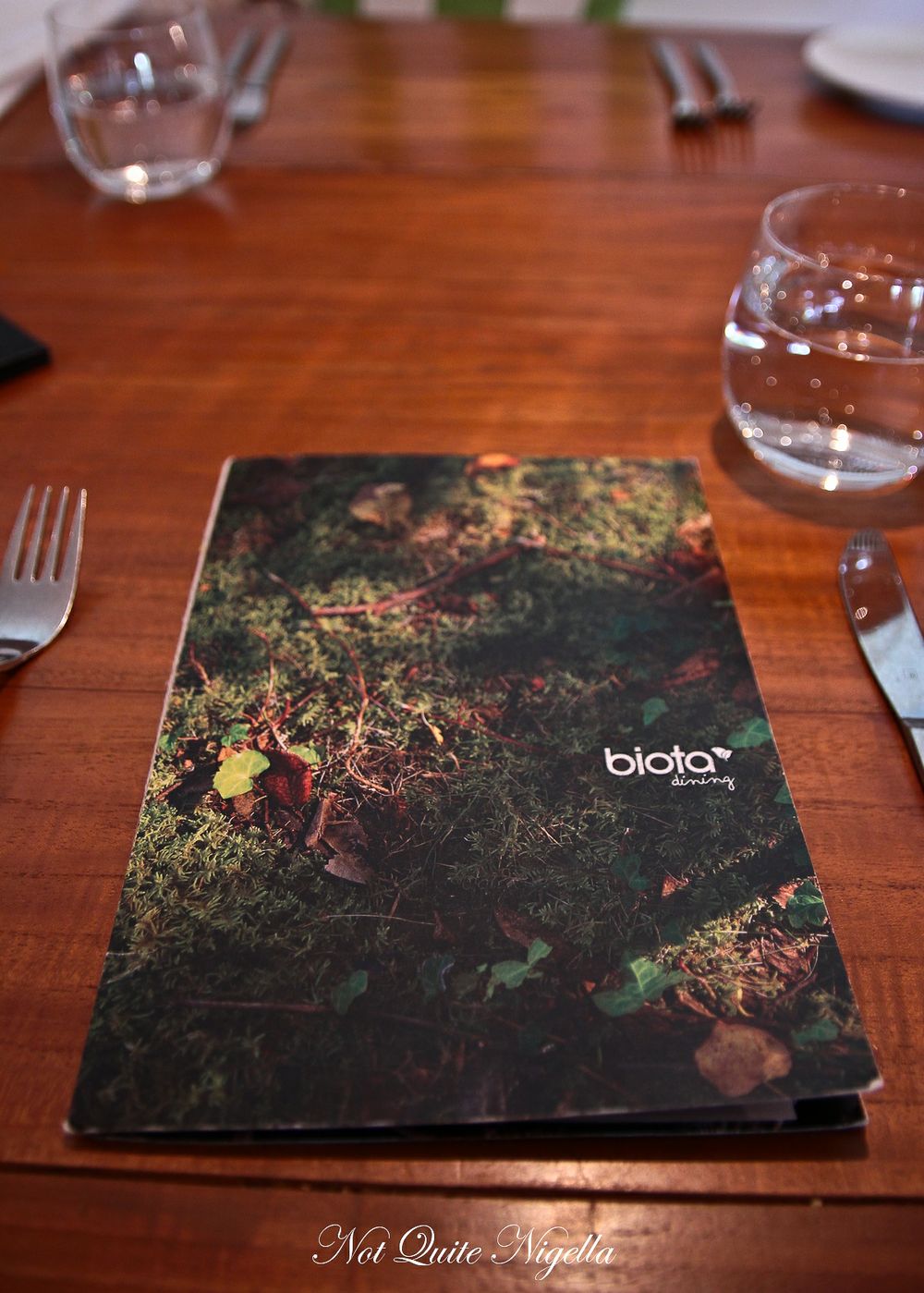 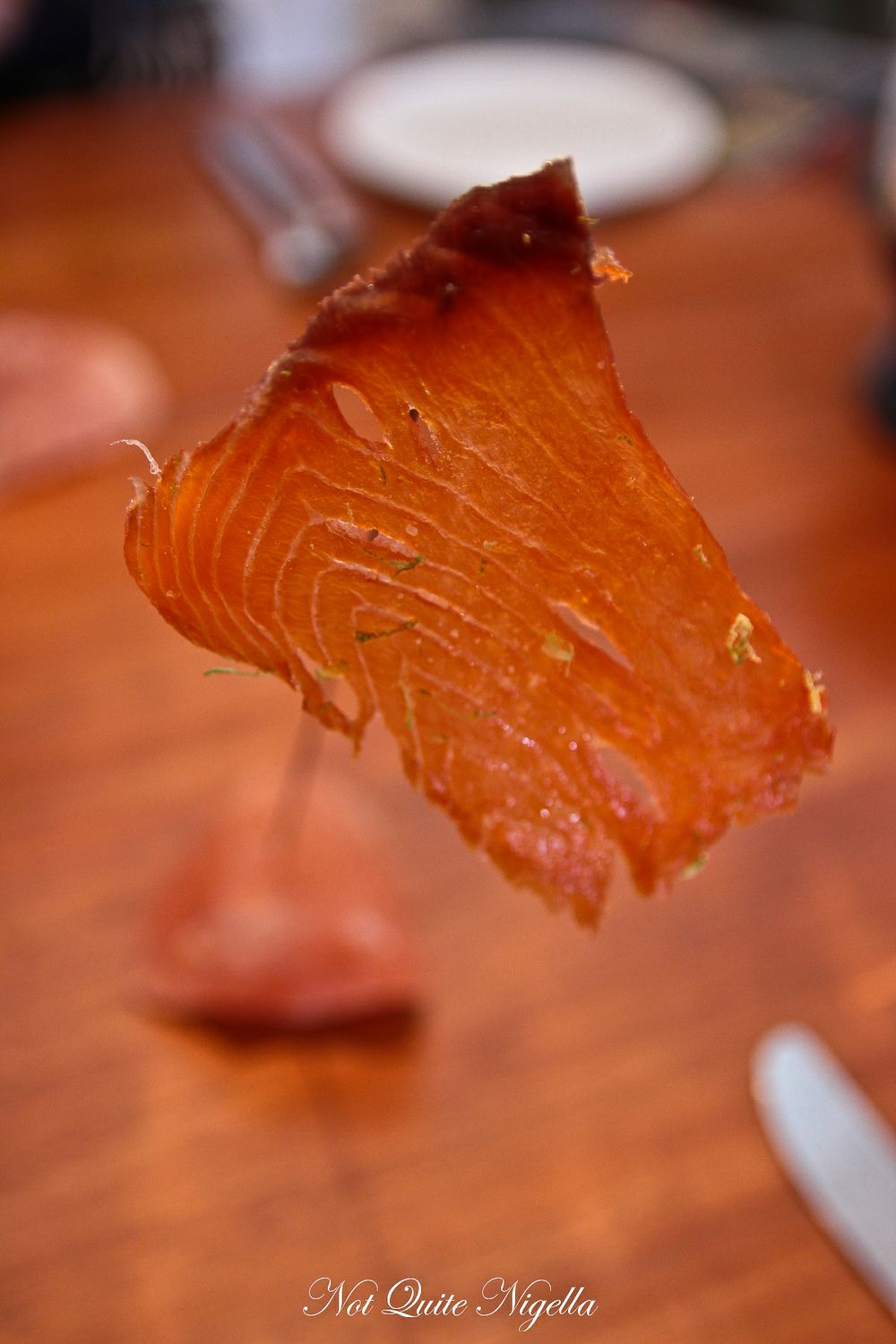 The first bite comes out and it is a sheet of semi translucent ocean trout jerky on a slender stick anchored to a Himalayan salt rock. It's divine, with a touch of lime salt sprinkled on top and I eat it slowly savouring the flavours all the while wondering why we can't buy ocean trout jerky. Service is smooth, deferential and knowledgeable. 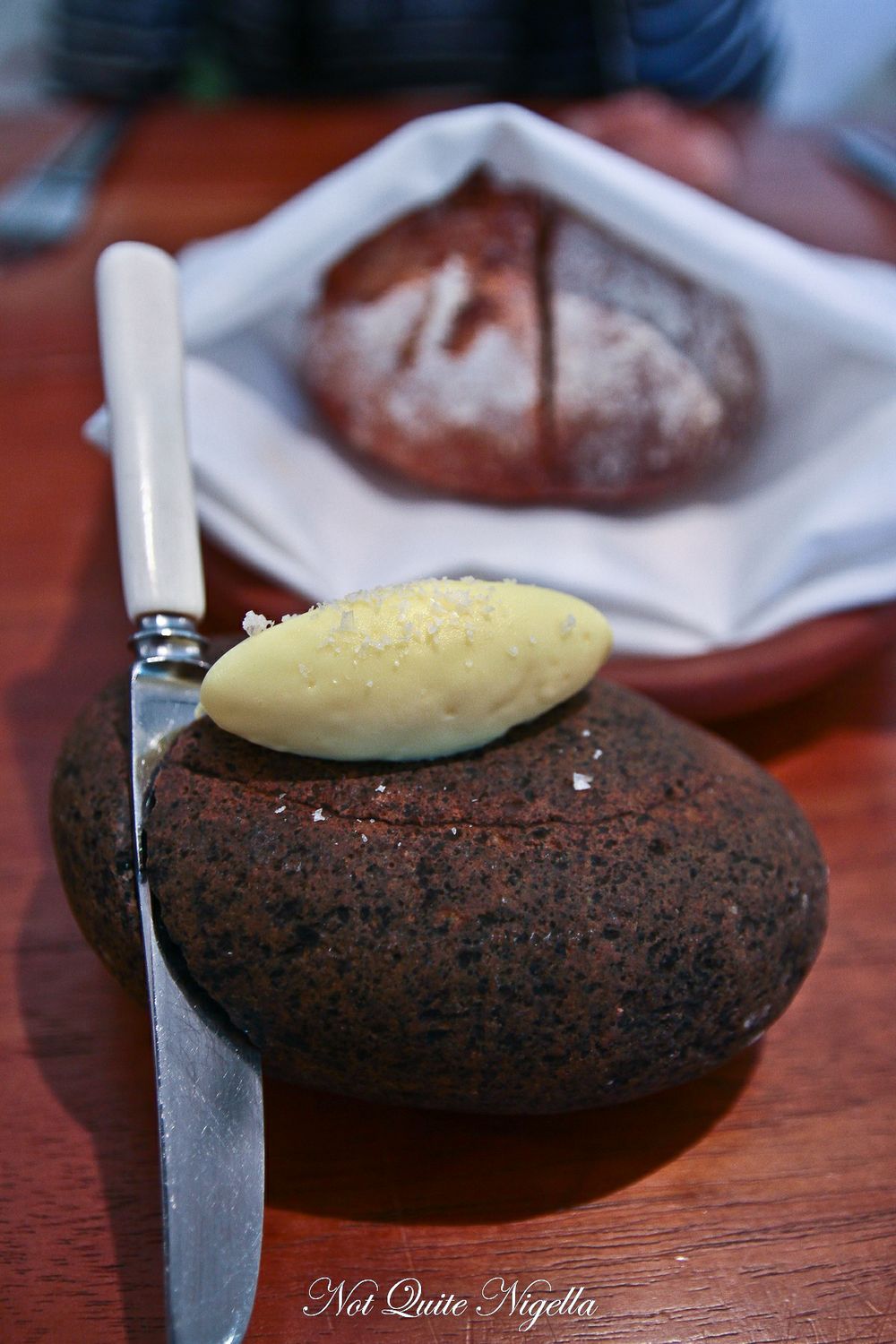 The bread is a house made whole wheat sourdough served with light smoked, cultured butter. We both love the quirky presentation of the butter on the rock. 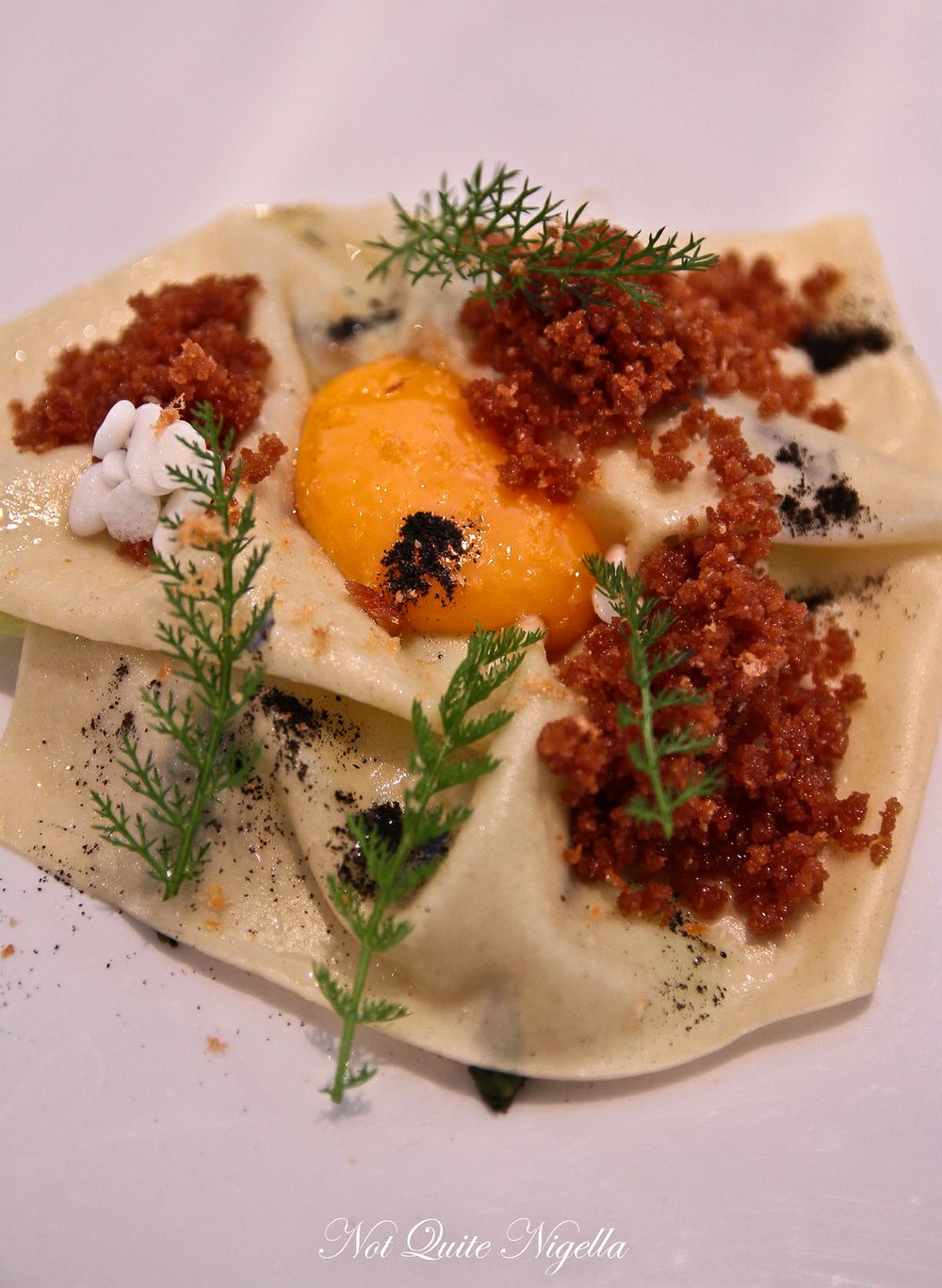 Our first menu course arrives and we watched James as he lowered one of the lamps onto the plates to use the heat to cook the top of the egg yolk. The dish is made up of paper thin silky pasta, neat piles of divinely crunchy smoked rye, tiny little balls of egg white, thinly sliced asparagus all draped on top of a soft mound of sheep's milk curd. There are also little dark patches of ash and the aroma of truffle. It's delicate and a textural delight especially when you break the creamy yolk on top of the rest of the dish. 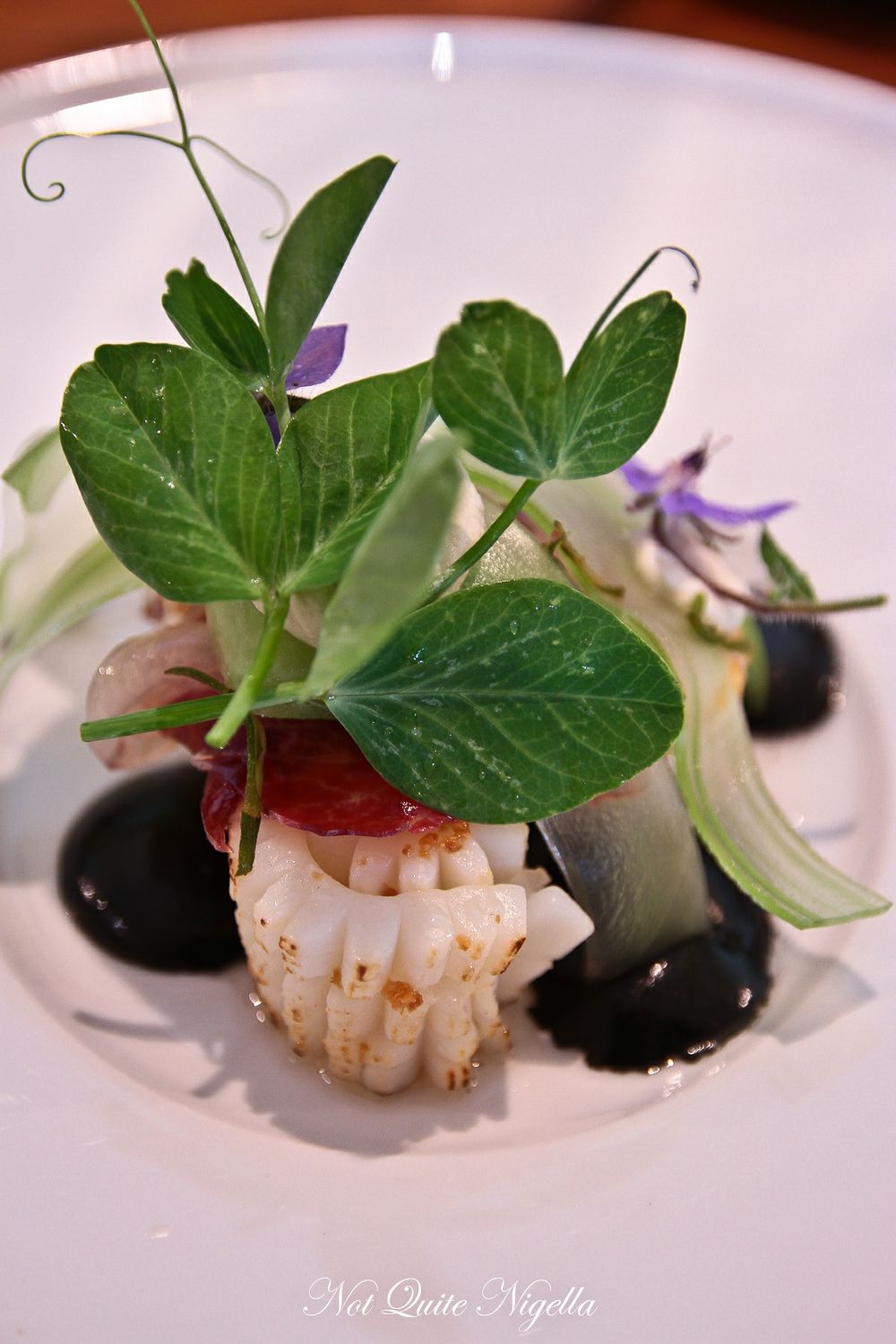 This dish has three curls of tender cuttlefish, thinly sliced celery and dabs of chilled oyster creme, squid ink and a fold of jamon added to it to give a salty burst of flavour. Borage flowers from the garden completed the dish and again, it's another one that's almost too pretty to eat-almost! ;) 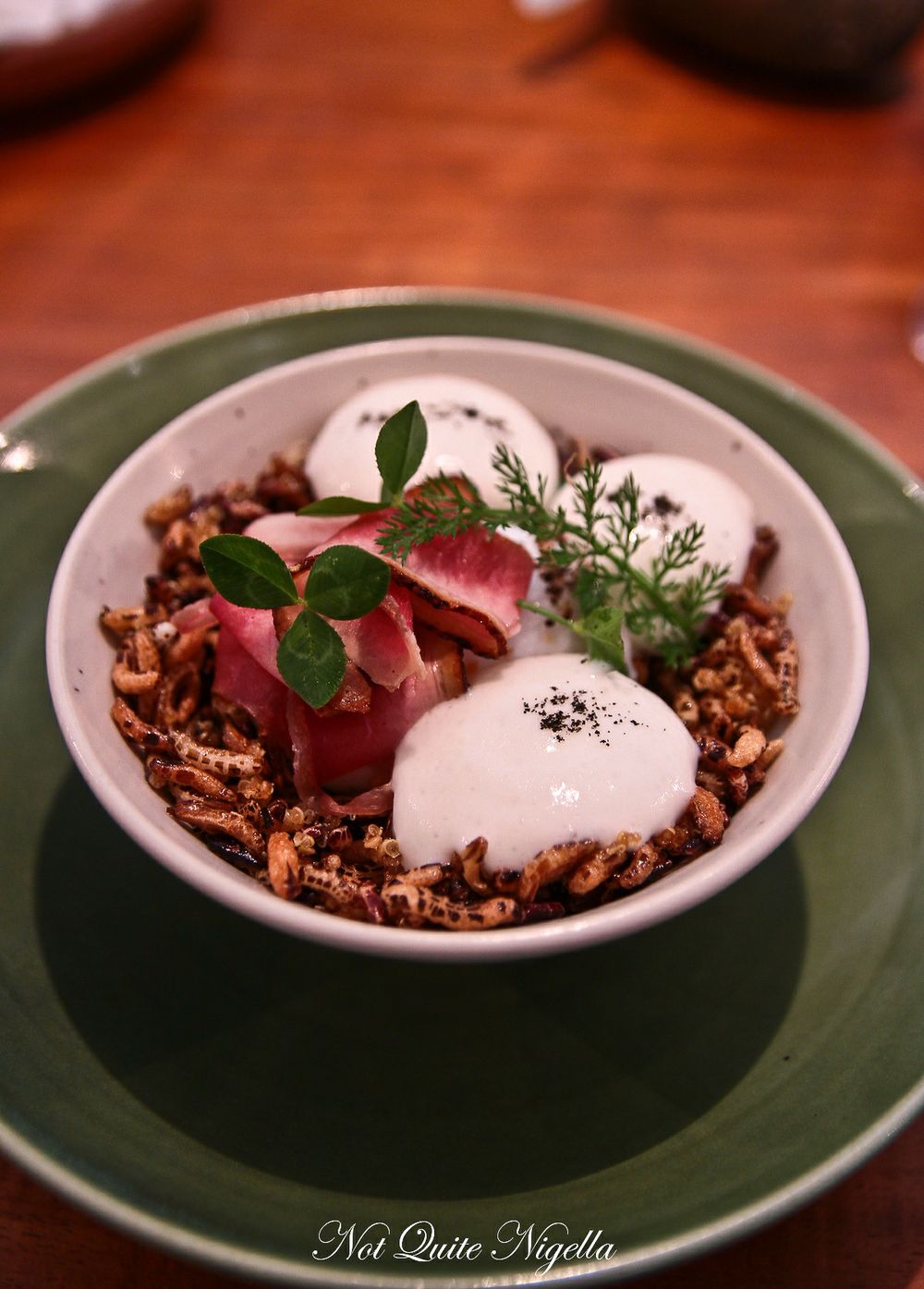 In the absence of a better description, this course reminded us of breakfast. First, there was the slow cooked duck egg with the enormous yolk hidden underneath amongst the crunchy puffed grain. The shaved duck ham was thinly sliced like prosciutto (which makes you also wonder why we don't get duck ham more as it is divine) and there were also cloudy puffs of celeriac cream. It's a strong, flavoursome dish that is incredibly rich-the giant duck egg yolk takes care of that. 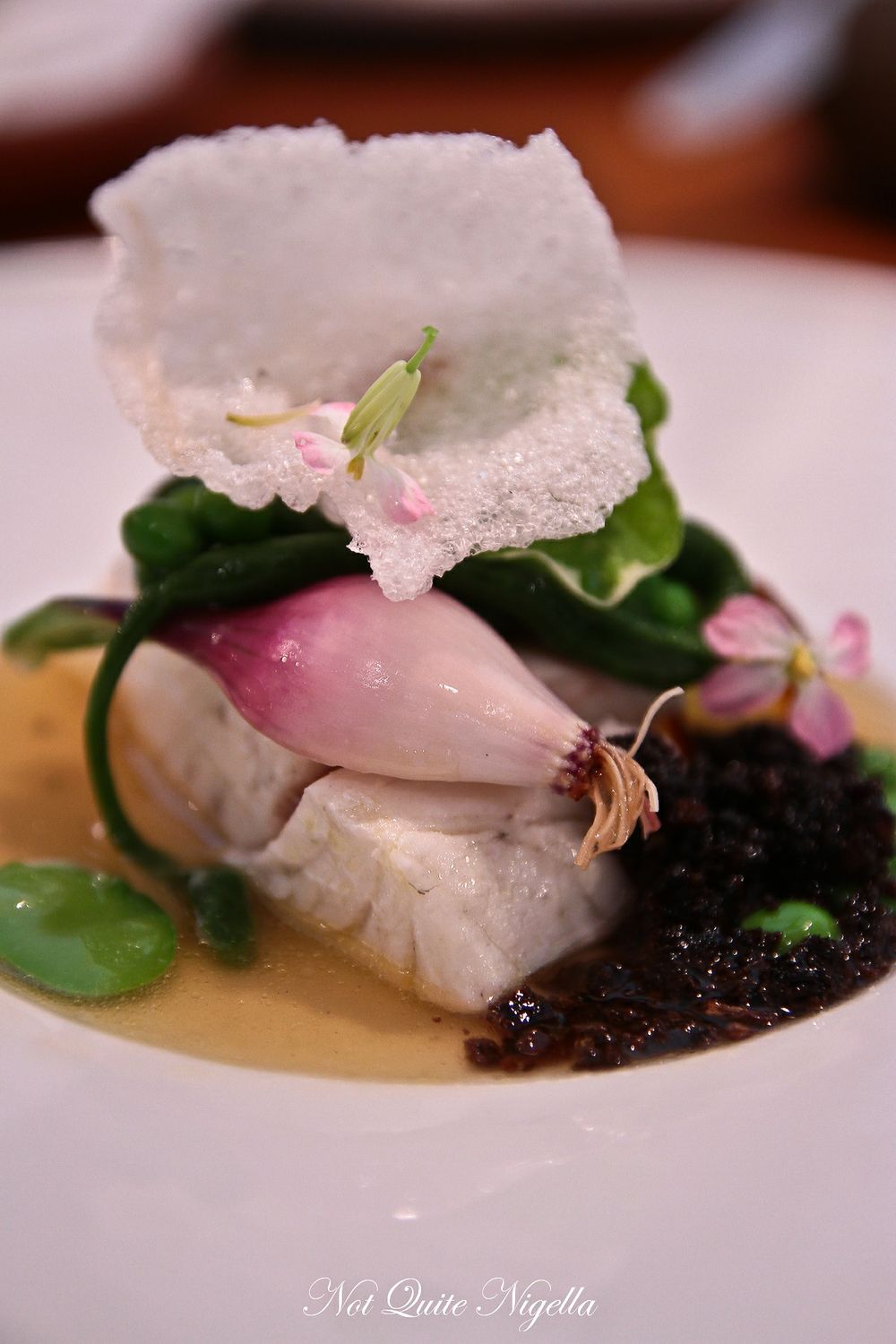 We both thought that perhaps this dish should have come before the above dish as the duck egg and duck ham dish was a strongly flavoured dish and this ebbed straight into delicate again. The mulloway was perfectly cooked and served with sweet, small garden peas and broad beans. A green pasta resembles snake beans and there's a neat portion of morcilla to the side that adds a lot of flavour. Serving this dish also with a spoon would have been great to try the fried bone stock too. 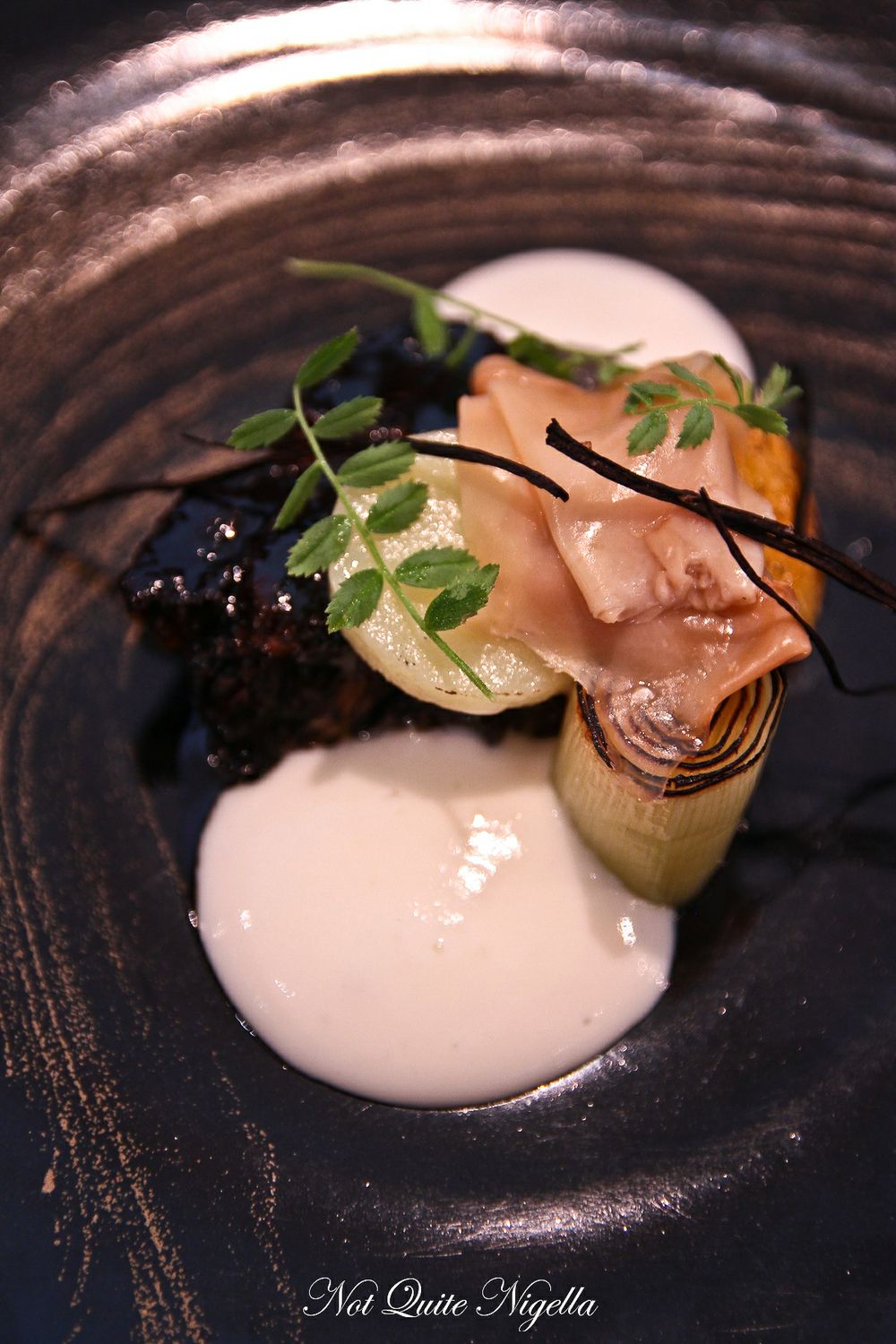 Our last savoury dish is the pork neck and by this stage, we are getting rather full. The course sizes are the same as if you were ordering the two or four course menu so they're substantial and we both thought that the chef's menu was definitely the best value (we couldn't even imagine the effort that goes into putting a plate like this together when you break the cost down per course). The pork neck is gelatinously soft, smokey and slightly sticky with cooked down sweetness. There is also potato cream, sliced potato with the texture having a little bite back and charred leeks. Along with this are marinated oyster mushrooms which have an almost Asian flavour to them like Chinese rice wine as well as charred blood orange. The whole dish is rich but well balanced too. 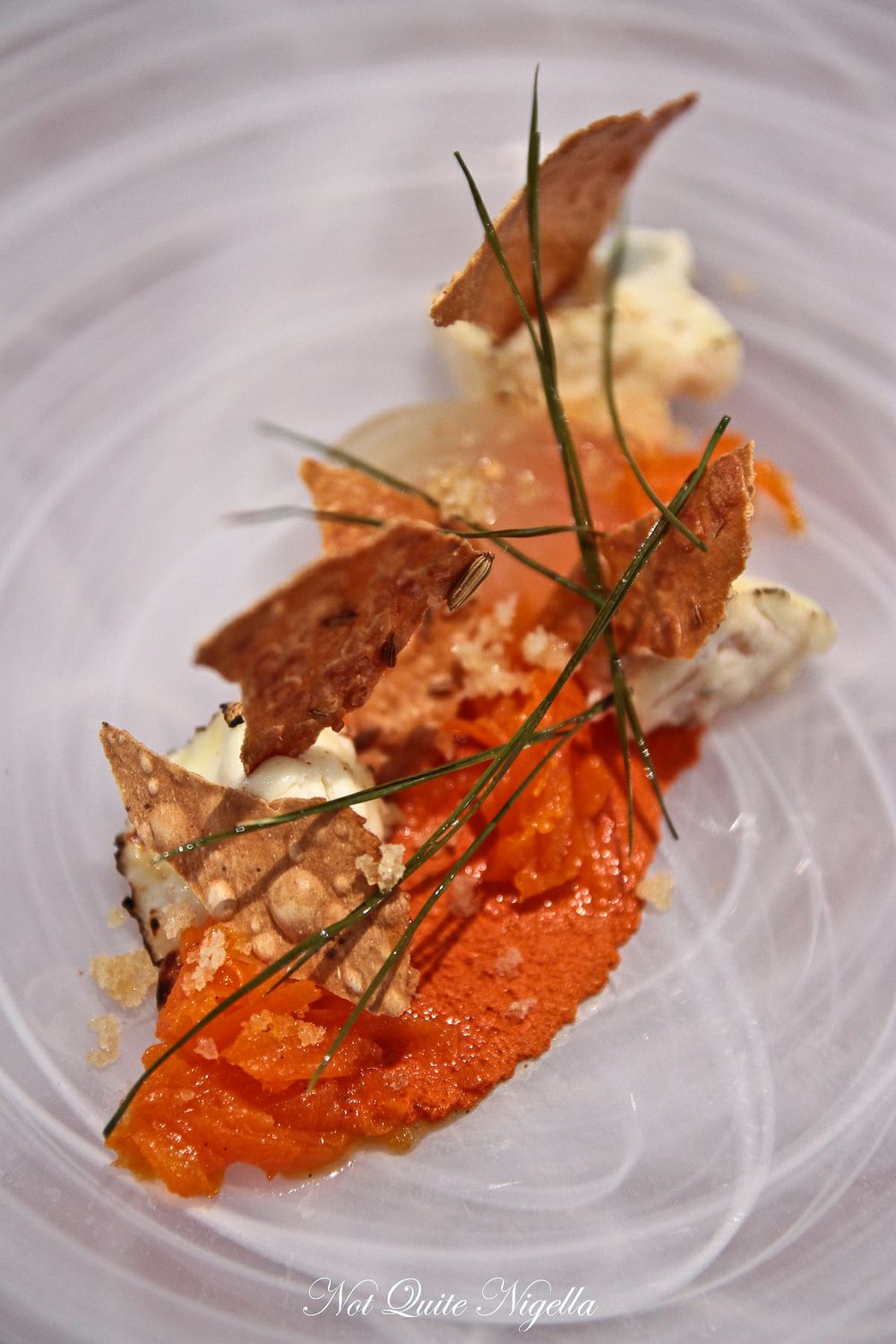 We're quickly learning that cheese isn't just cheese here and there's no serving of a wedge of cheese and some dried fruit. Here, the local Pecora Dairy bloomy cheese is lightly torched and served with apple gel, carrot marmalade. It sits on a thin layer of carotene and is topped with pine needles. I'm curious about carotene as I've only known of it as a vitamin, and they tell us of the many steps that they've taken a carrot through to arrive at the concentrated carrot flavour and colour at the bottom of the plate. 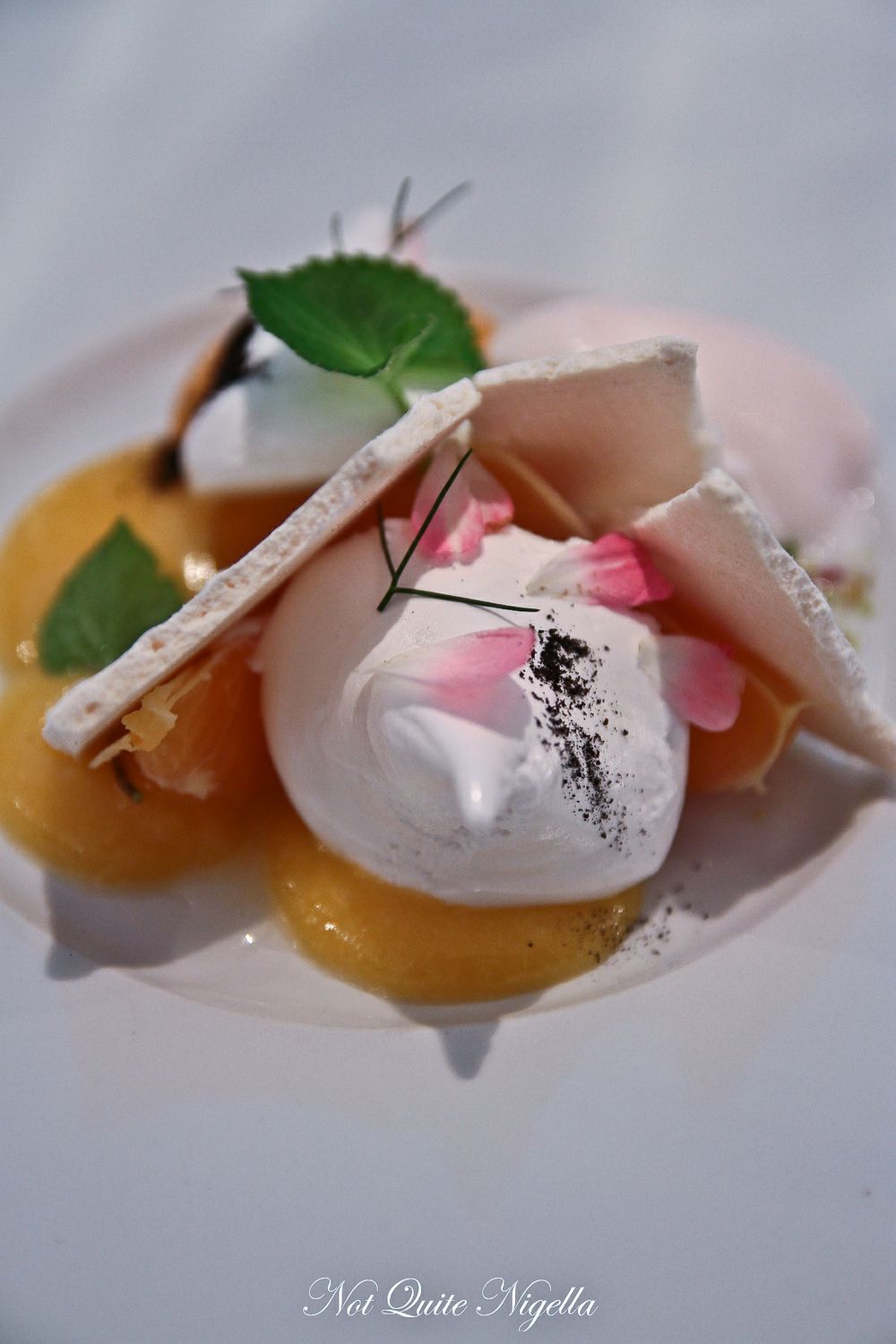 Our last course was a pretty one which involves two soft squirts of rose and champagne marshmallow on top of lemon curd and mandarin jelly, mandarin sorbet, slices of fresh mandarin, pistachio crumbs and thin sheets of meringue. It's like a mandarin meringue pie deconstructed and the slightly tart fruit goes well with the sweet, perfumed marshmallows and crunchy meringue. 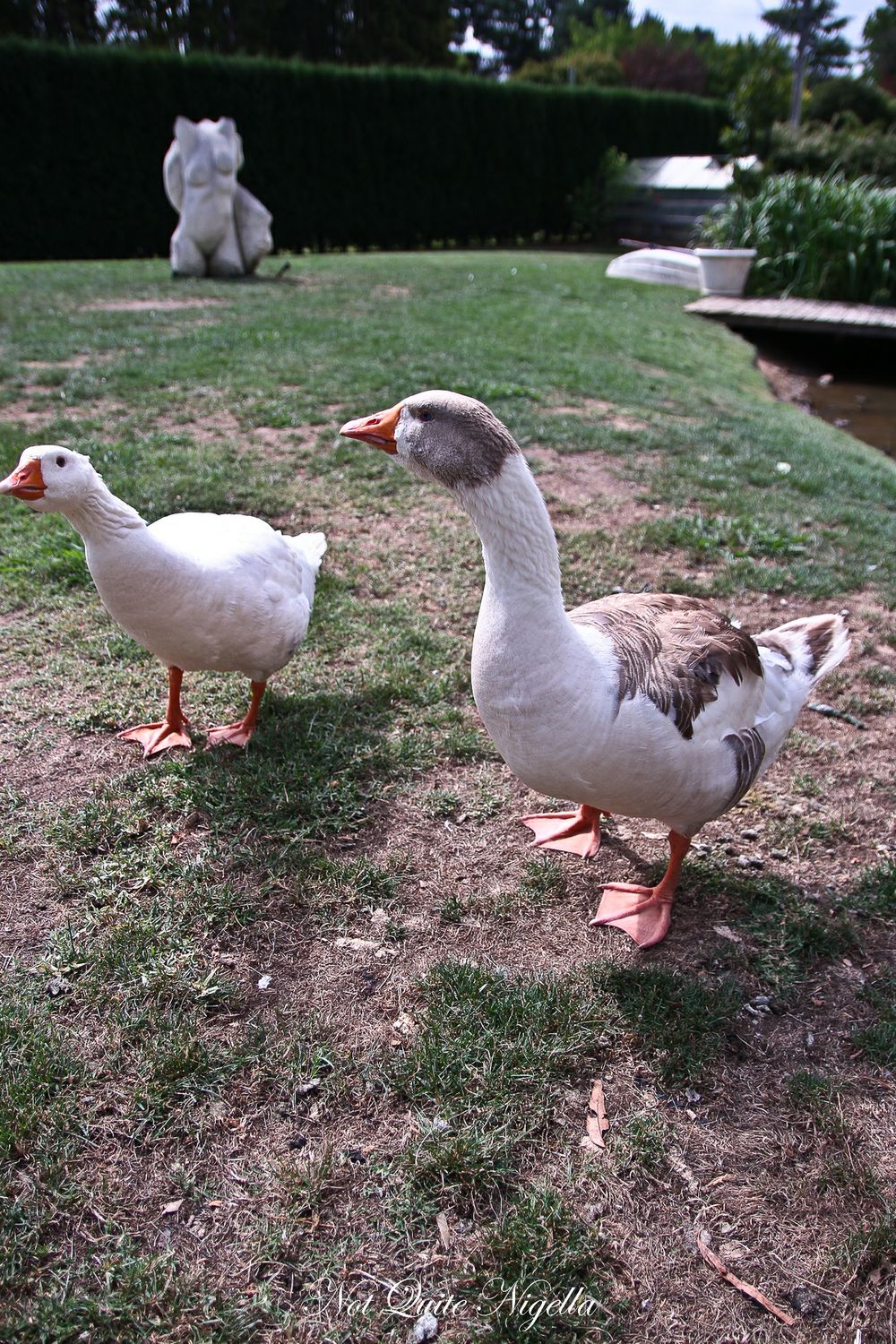 We can't leave without a walk through the kitchen garden where a chef is busy cutting items for the kitchen. Along with ducks, there are two geese-one called foie and the other gras! We head towards Sydney all the while plotting about whom else we can make the return drive here with...

So tell me Dear Reader, do you like open kitchens where you can see what the chefs are doing? And would you or have you ever asked to go into a kitchen to talk to a chef? 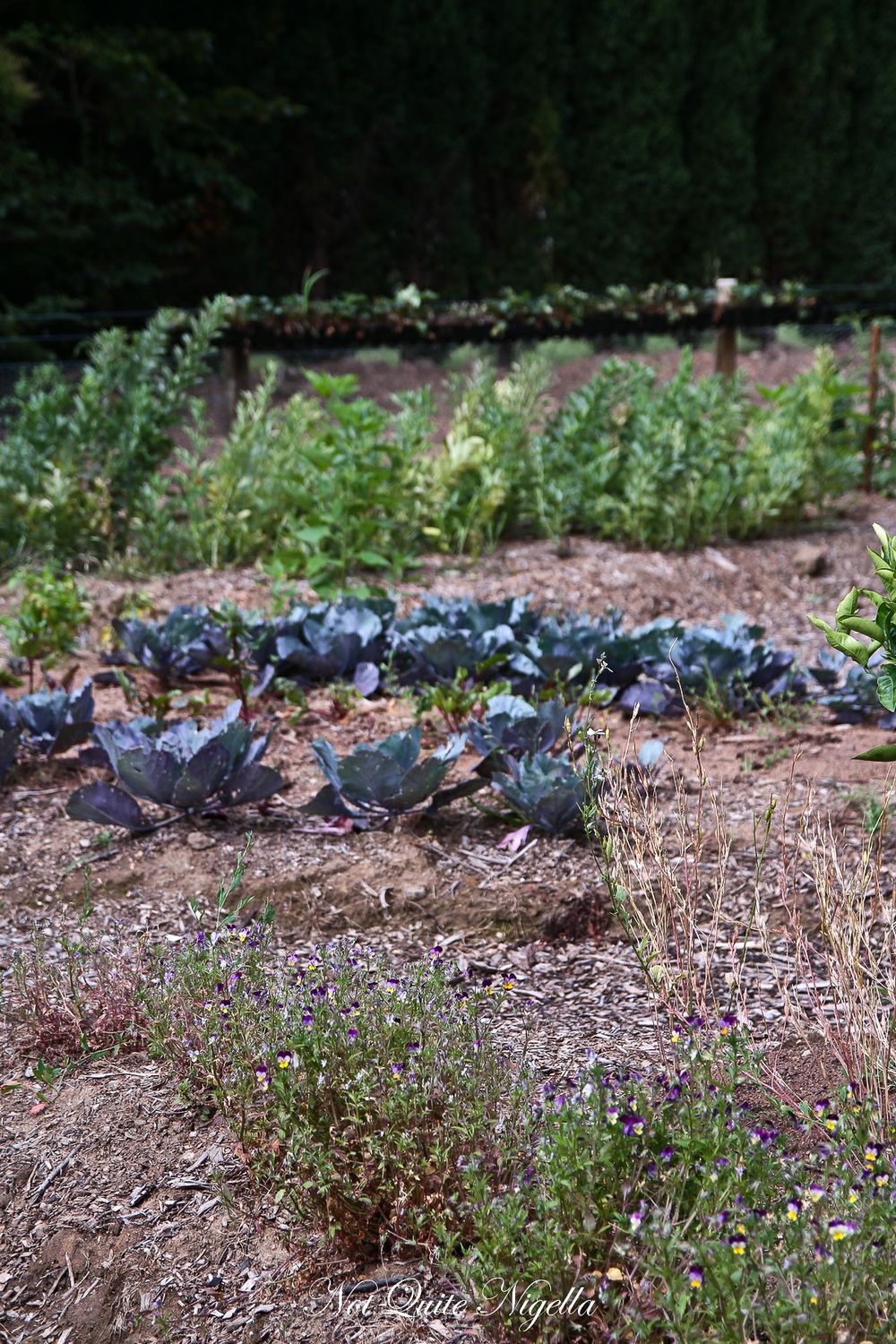 NQN and Mr NQN dined as guests of Destination NSW 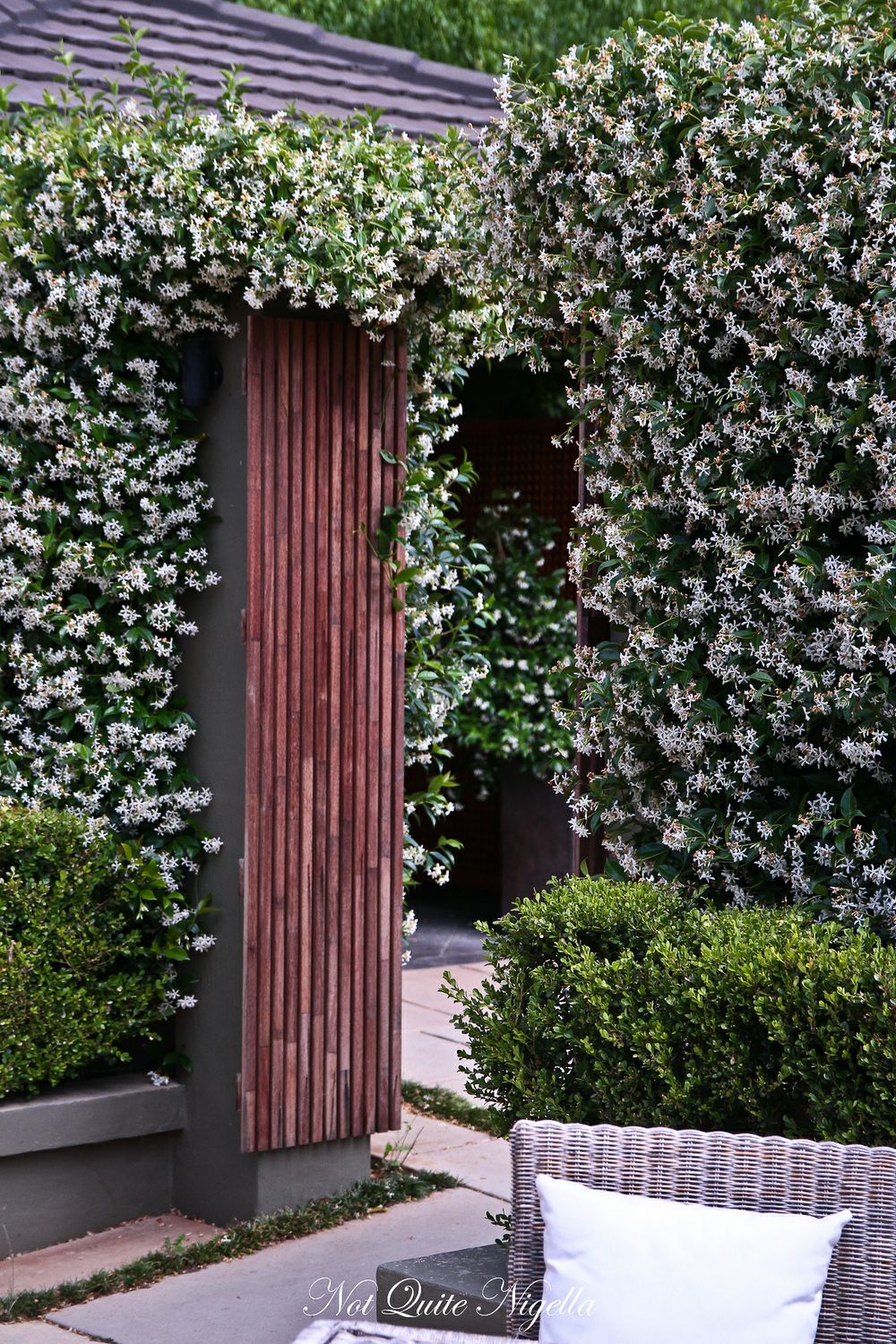