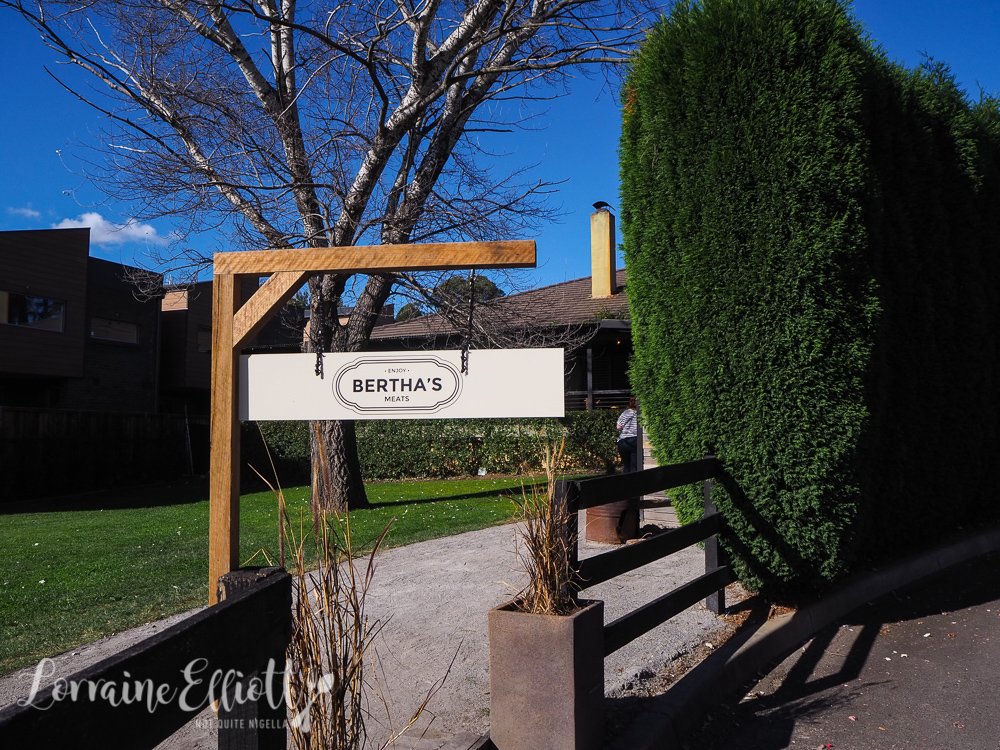 Bowral's Biota has a new baby sister. Bertha's Meats is a brand new venture located adjacent to Biota that serves up American style barbecue meats from brisket, ribs, steaks, burgers as well as pies and puddings! 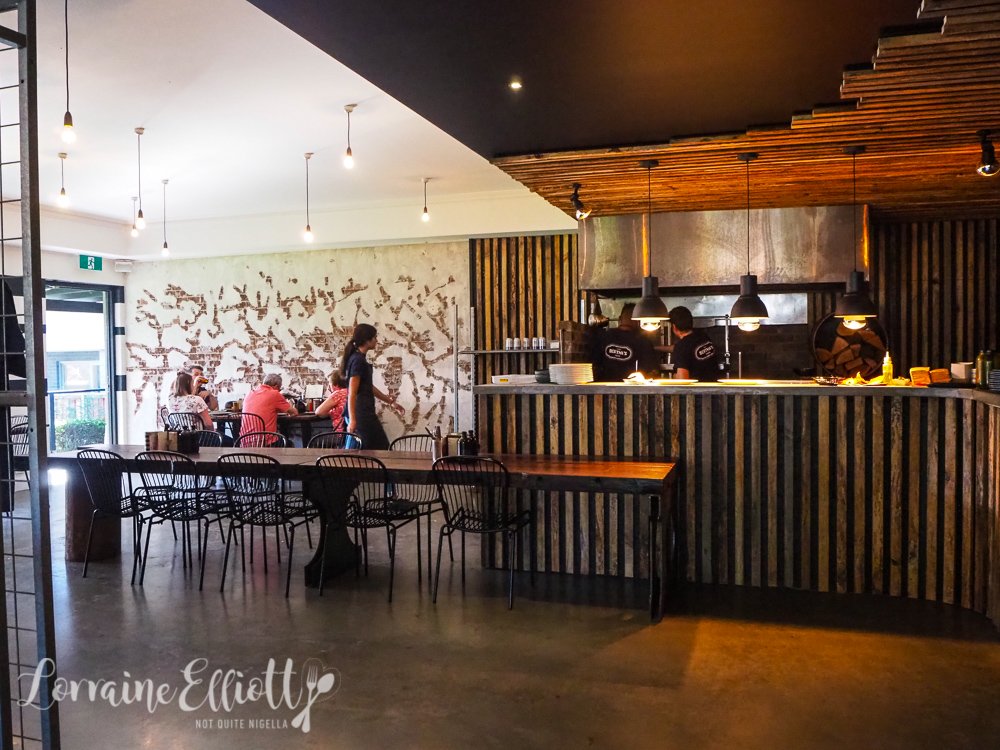 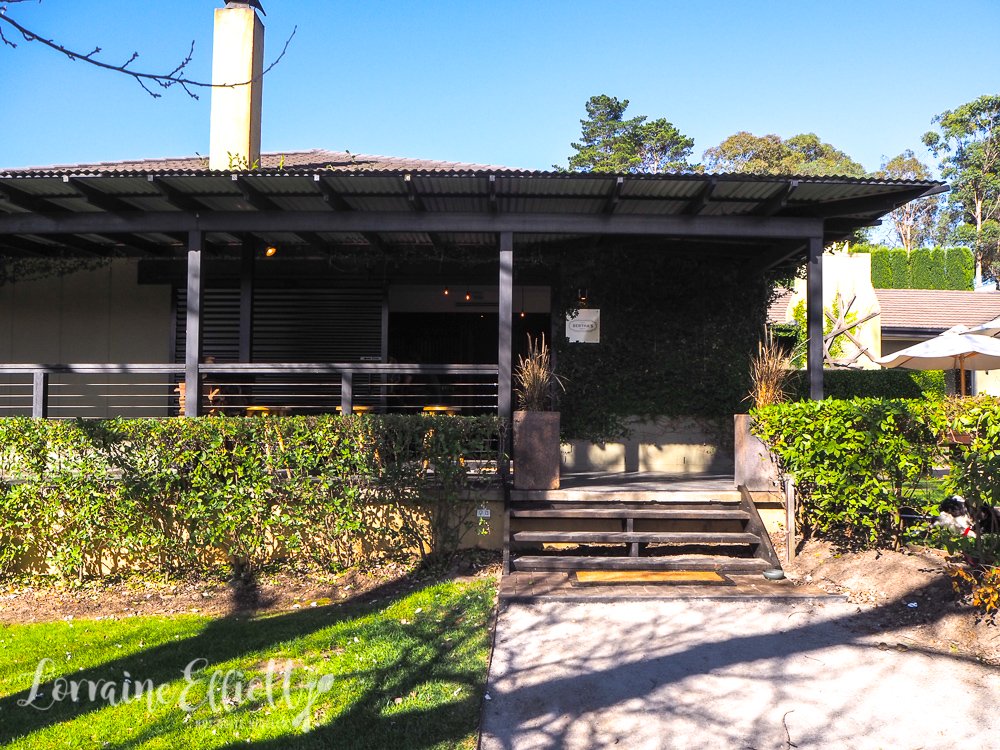 The eatery's name Bertha comes from Big Bertha, the name of their smoker which seems a very apt name for a smoker. The menu at Bertha's is about American style meats - brisket, sausage and ribs but with the addition of beef cheeks and a mix of sides. There are also four steaks on offer and desserts. 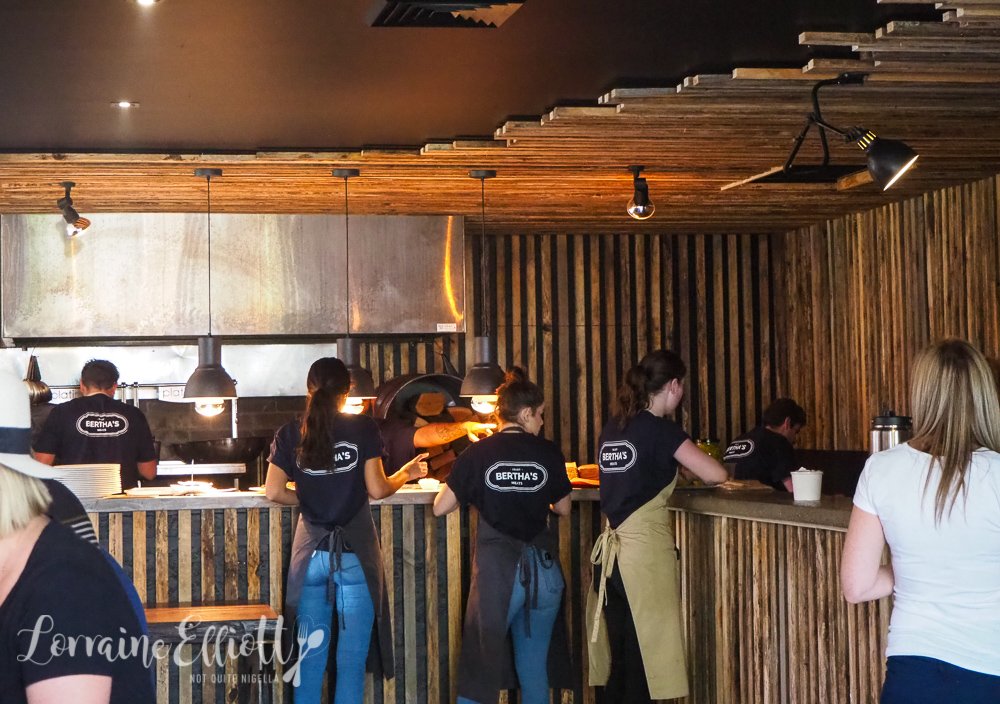 This Easter long weekend they are also a victim of their own popularity. Our waitress has to recount what has already sold out during the long weekend. The bad news: the pork ribs and beef cheeks are gone. But some good news: the brisket and sausage are available. They also have wines, beer, cocktails and soft drinks. 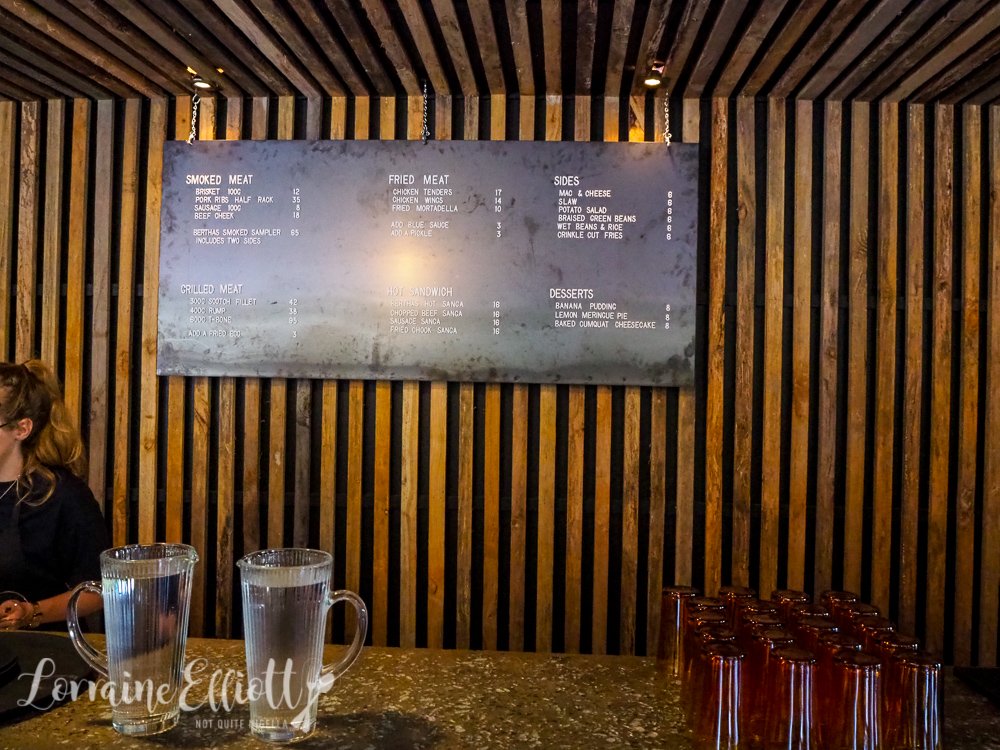 As they've only been open a week and had not anticipated this level of interest, systems are yet to be smoothed out. Chef James Viles is busy pouring drinks while wait staff bring trays of food to customers. 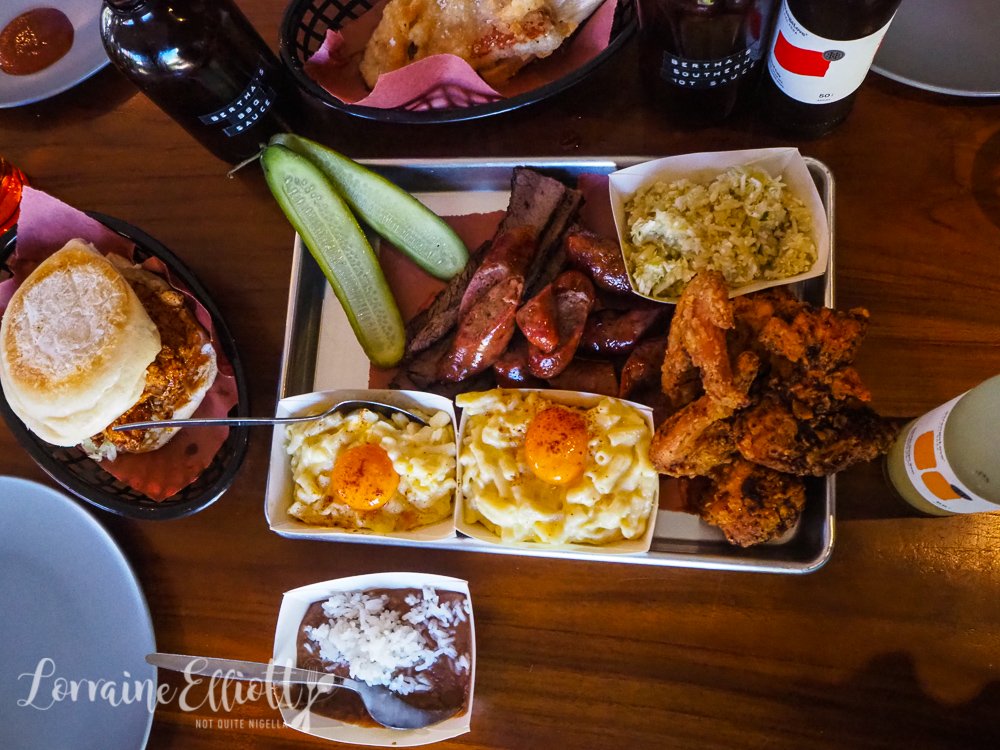 The chef is Ryan Kovac of Biota and some staff are from Biota so you get that fine dining level of service which is an unexpected but pleasant surprise in a casual barbecue joint. 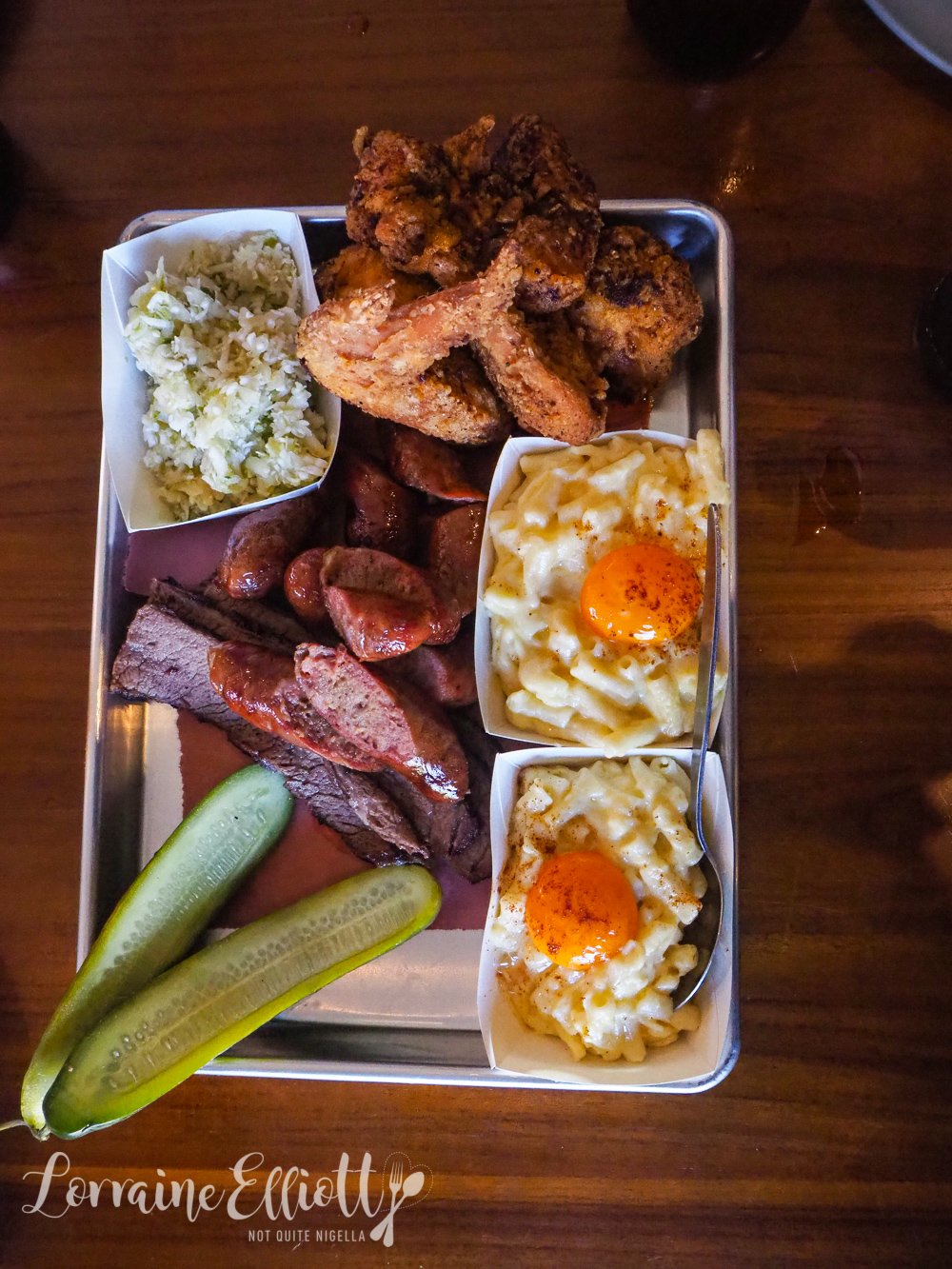 You can either order with the wait staff or at the counter but drinks have to be ordered at the bar counter which is slightly confusing. 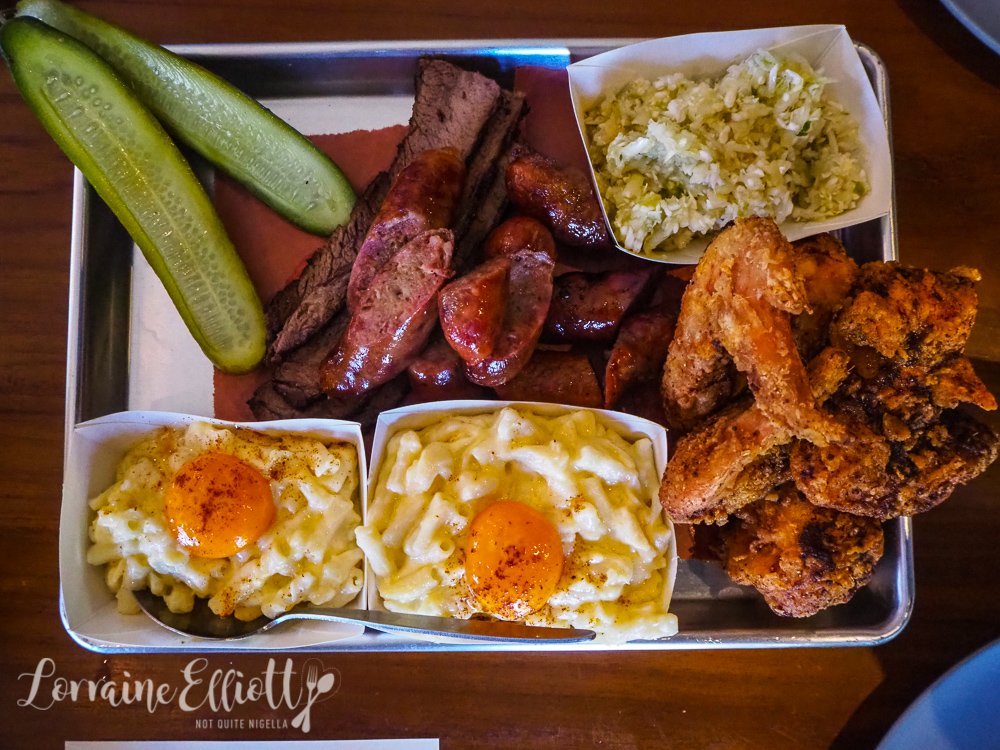 The tray with the smoked meat is the first to arrive. We have ordered 200g/7ozs. of brisket and 200g/7ozs. of sausage. The brisket is tender and served as four thinnish slices with a little bit of fat in it but mostly lean. I think I personally prefer the burnt ends and a bit more fat but it doesn't seem like a common offering in Australia although it is in the United States. The sausage is chunky with a bit of spice but not overly spiced. In America I love the jalapeno sausage which has a nice kick of spice. And oddly the pickle isn't very pickled or vinegary in flavour. 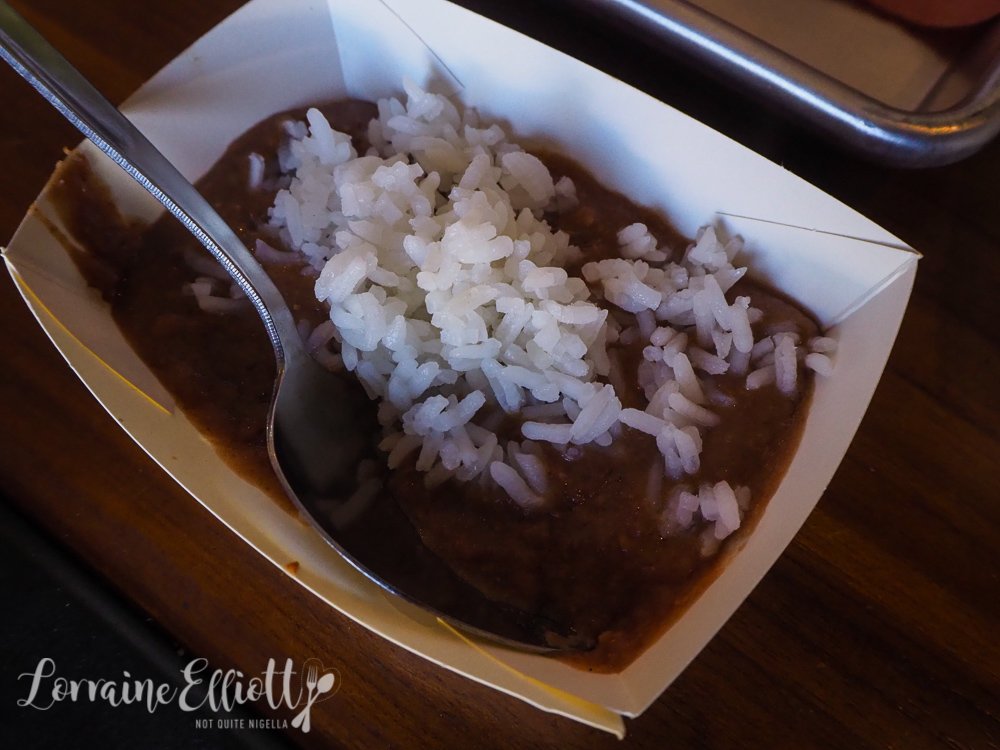 The sides come out on cardboard trays which do get soft quite easily so you have to eat them fairly quickly. The surprise favourite is the wet beans and rice which is kidney beans and white rice. It's definite comfort food. 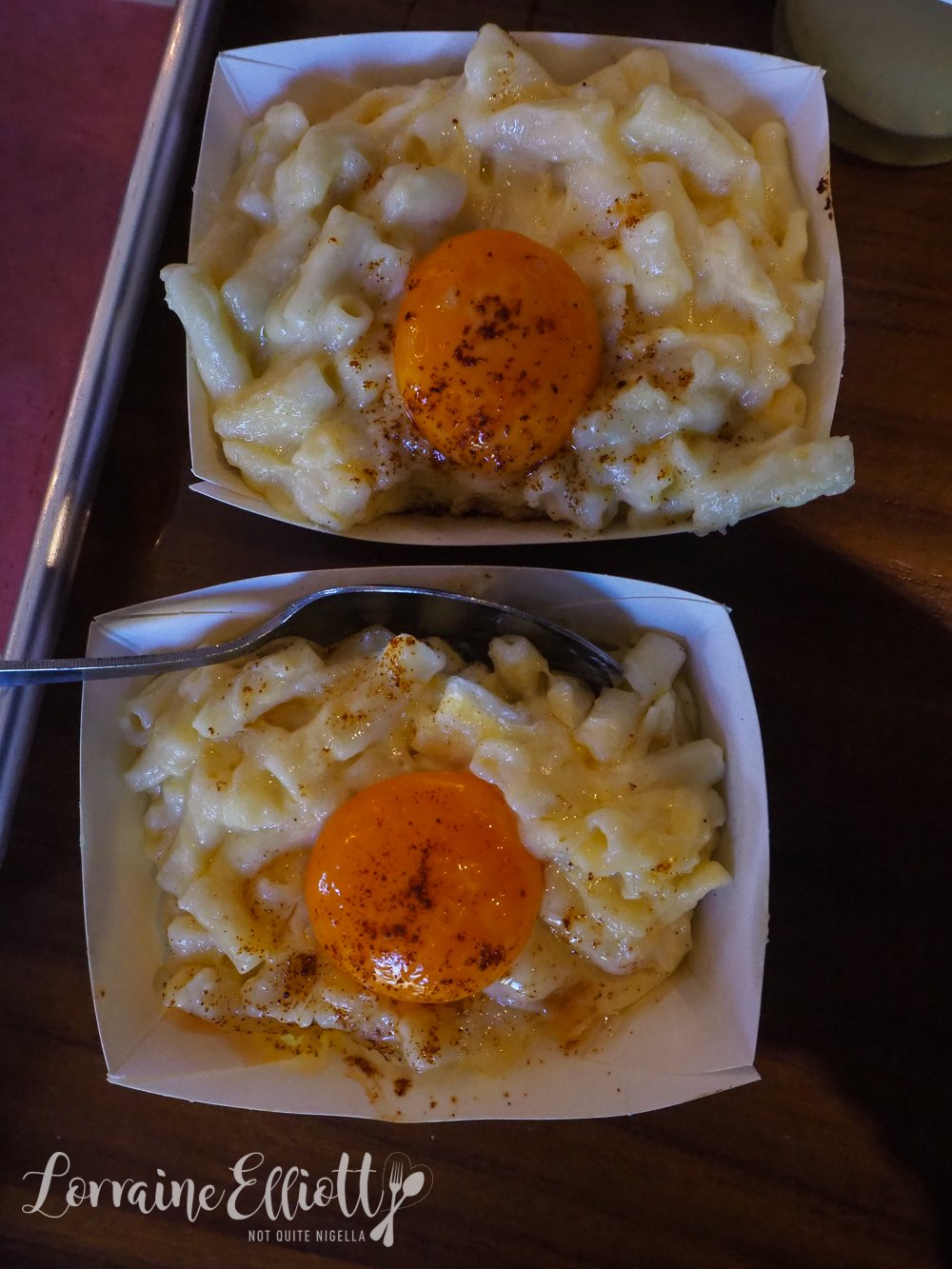 Mac and Cheese $6 each

Another favourite is the Mac and Cheese with a surprise egg yolk on top. None of us were expecting this as it wasn't mentioned on the menu but it's a nice addition as it ends up making it creamier than normal. 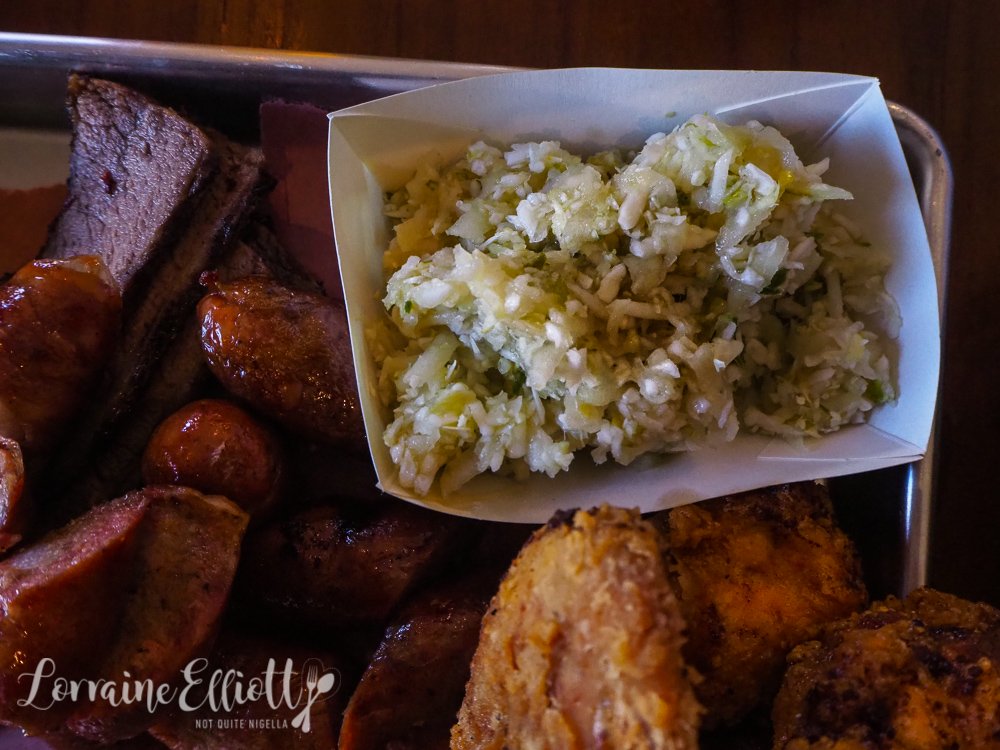 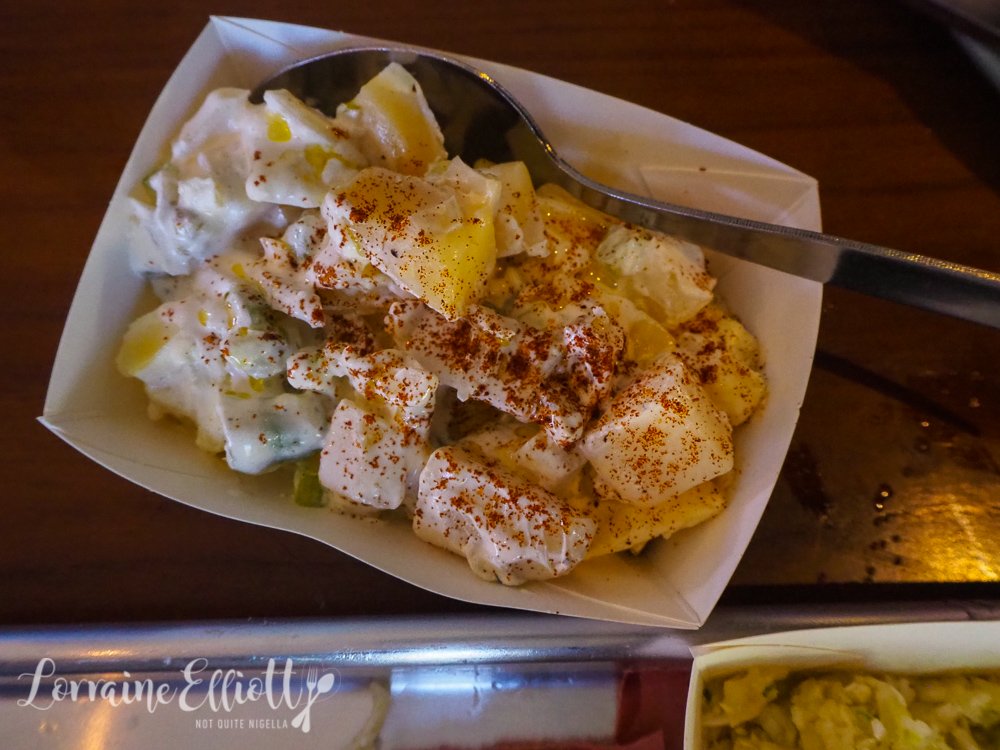 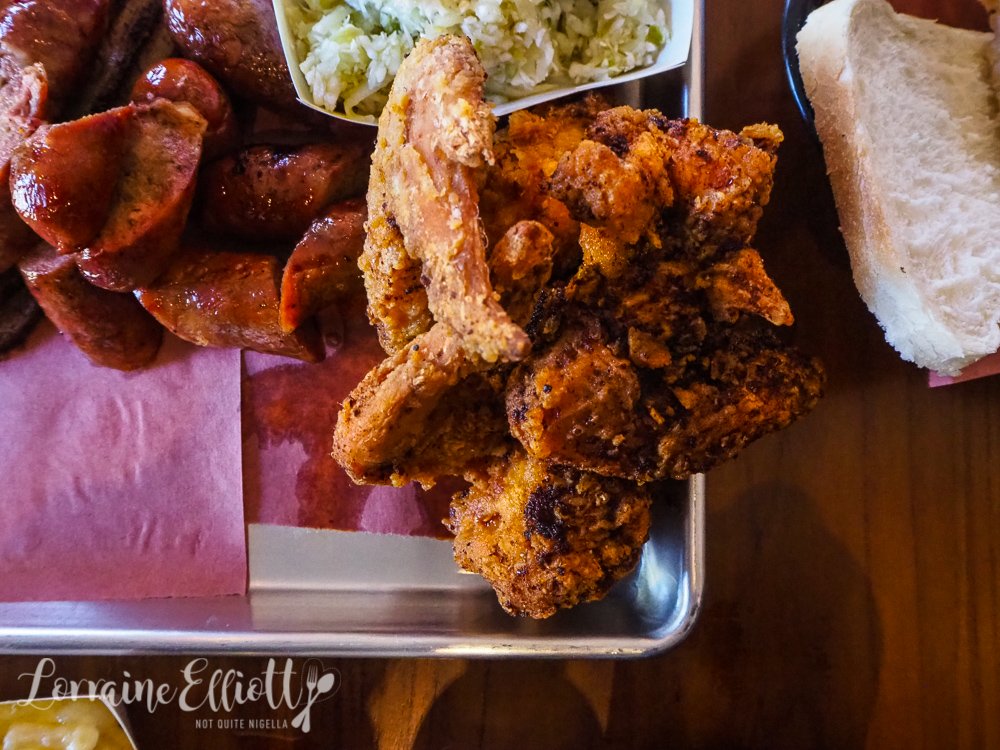 The chicken wings would normally come with the blue cheese sauce which you pay extra for and I think it really needs that because they need a little shot of flavour. On the plus side they are juicy, crunchy and enormous. On the tables are house made hot and barbecue sauces which are both good, the hot sauce being the favourite. 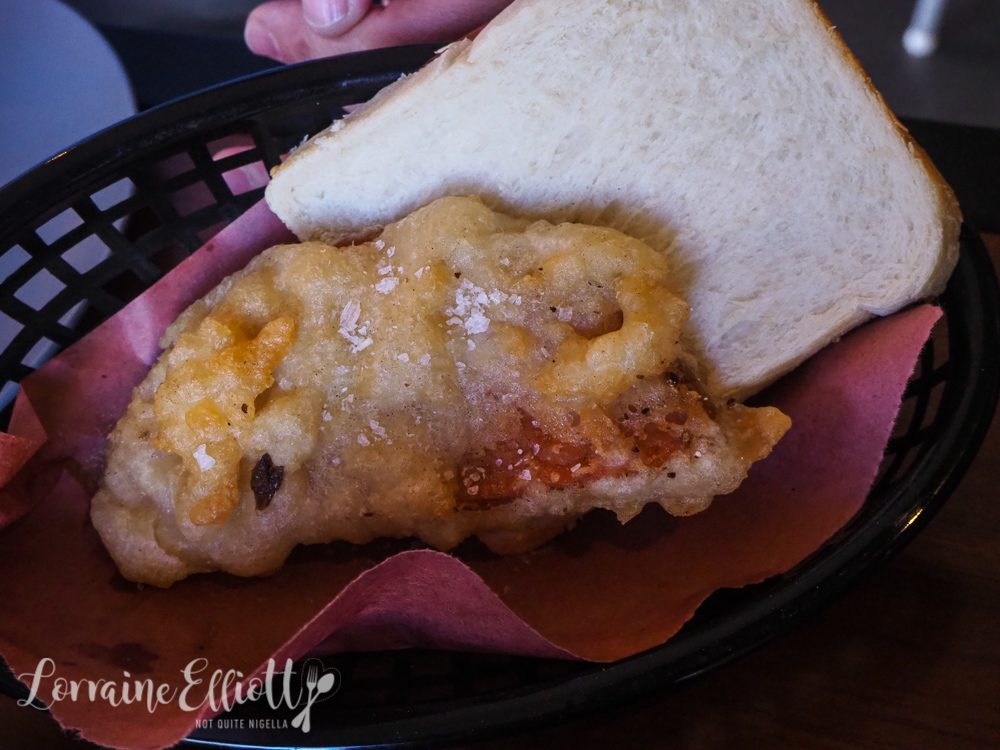 We ordered the fried mortadella because I have grown to appreciate this lunchmeat after visiting Bologna and I actually love it although I can't say I've seen it at many Southern American barbecue places. It's battered and deep-fried and sits on a slice of white bread and they are both just damn moreish together. 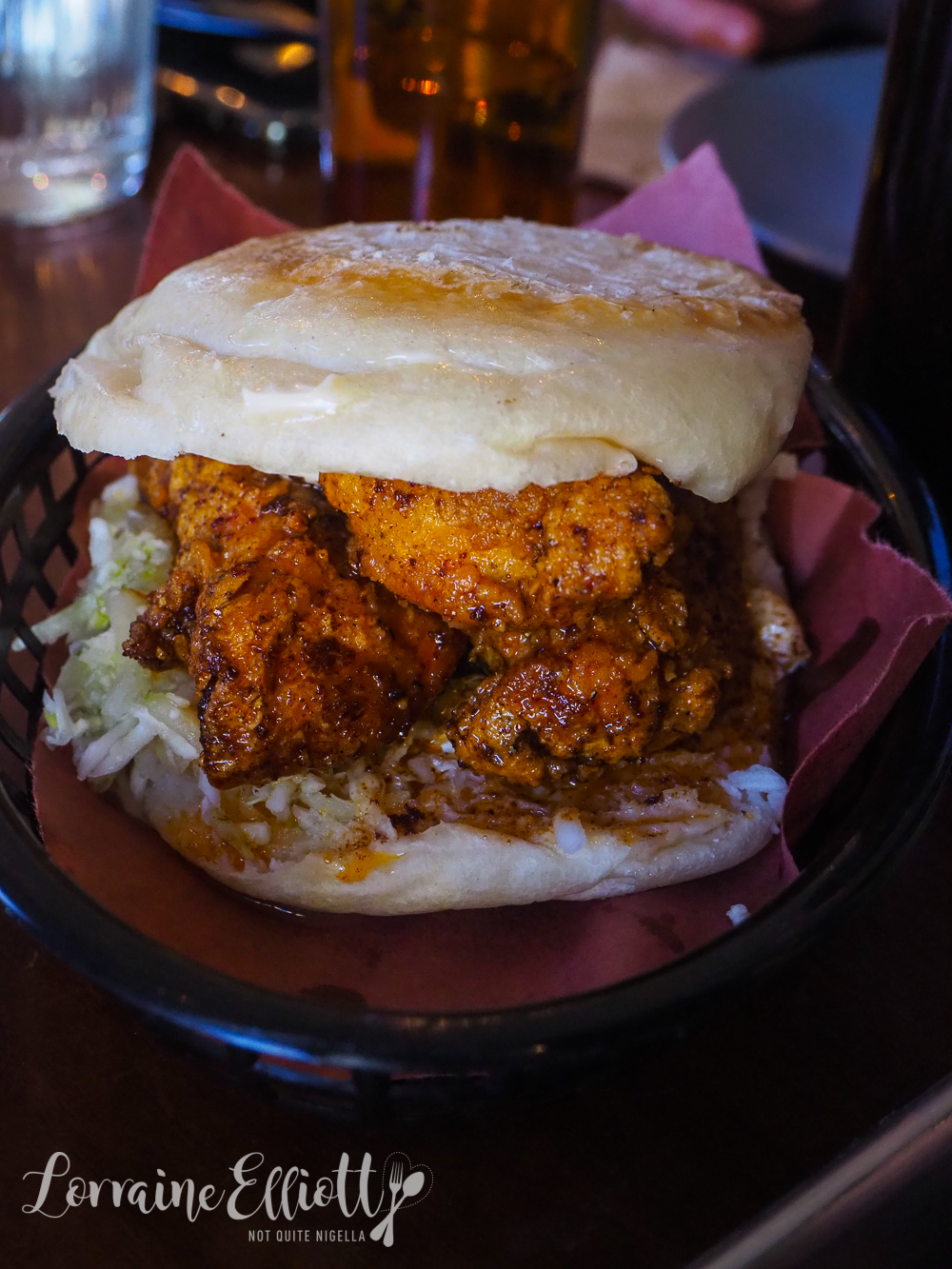 They recommended we try fried chook sanga which is a fried chicken sandwich. It is very generously stuffed with fried chicken and has some coleslaw on it too. I think again I would've rather had a bit more seasoning on the chicken and bit more creaminess to the coleslaw. 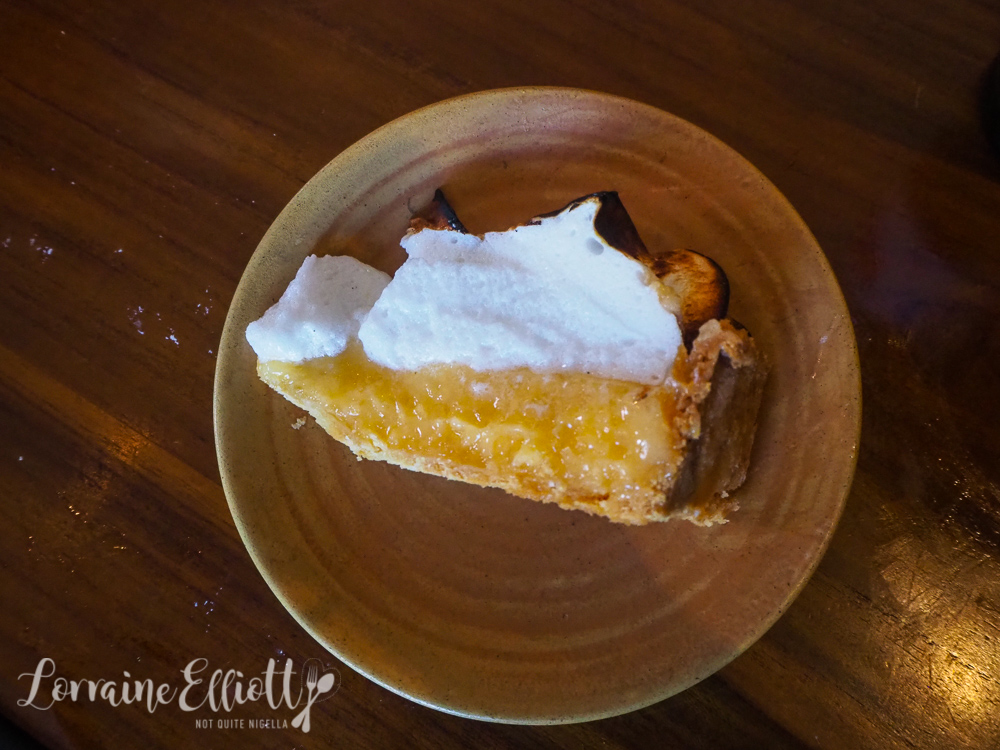 It's dessert time and since they had run out of a lot of things Ryan made sure to put the banana pudding and lemon meringue pie on hold when we ordered our mains. The lemon meringue pie is warm out of the oven and has a lovely crust that is crisp and a tartish lemon filling and a very light meringue. I think we all agree that this is nice but would've been better cold and we all prefer the banana pudding. 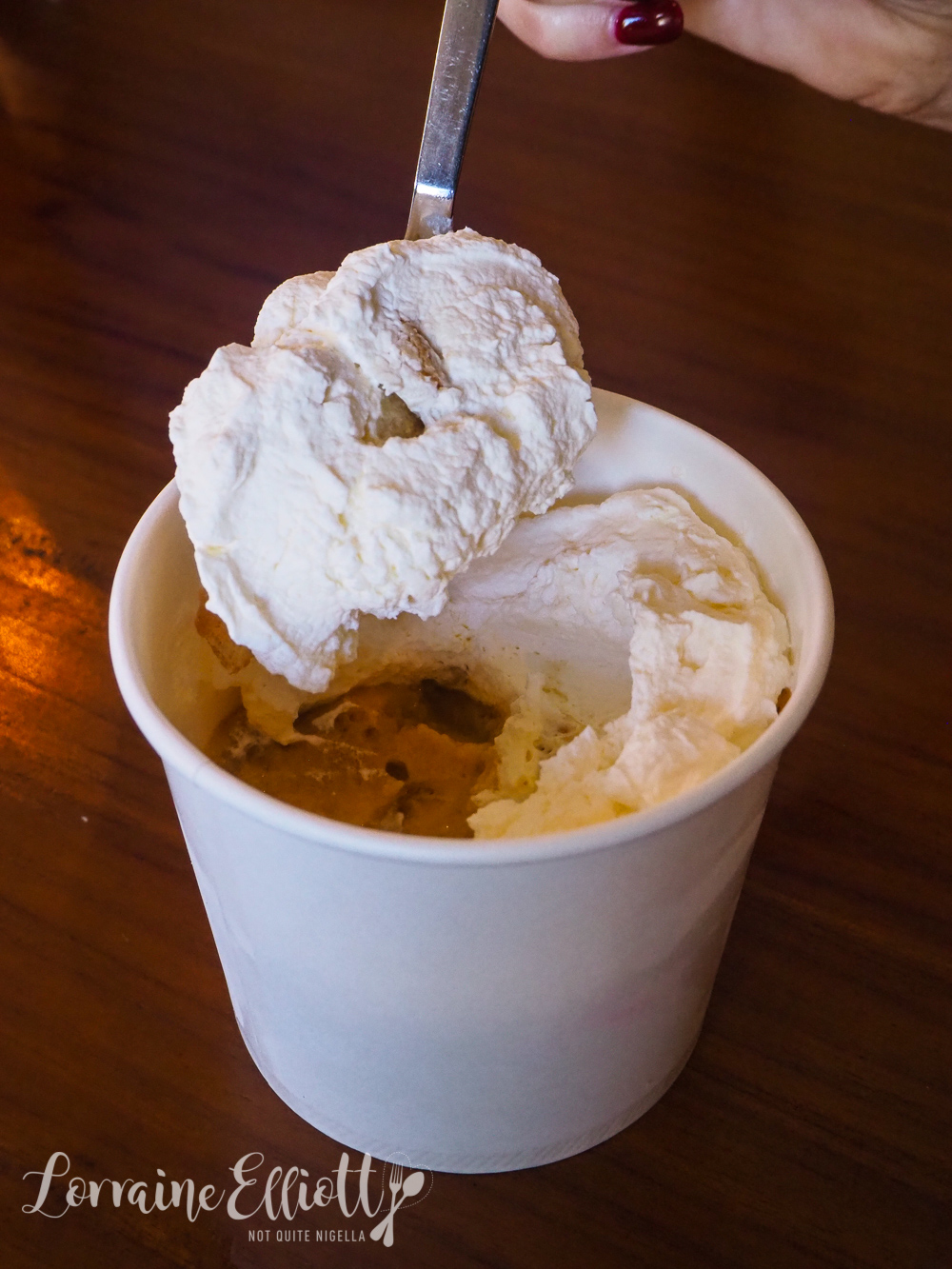 The banana pudding comes in a large cup. It does not have the Nilla wafers that an American banana pudding usually does. However everyone loves it, especially the two Americans Ivy and Ryan. There's a blanket of whipped cream hiding a layer of banana custard and slices of fresh banana. "This is damn good," says Ivy.

So tell me Dear Reader, do you have a favourite barbecue meat? Do you give your appliances names?