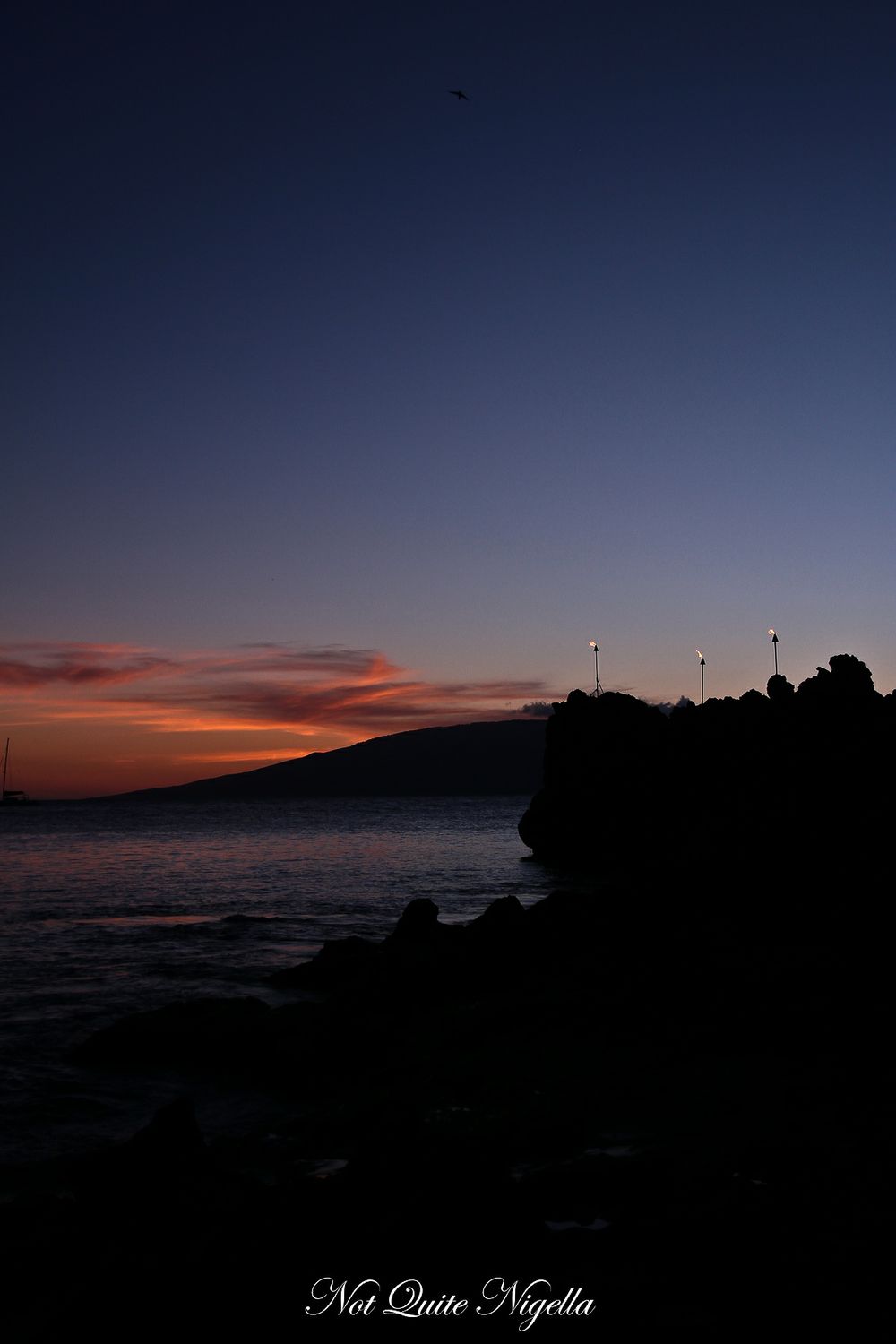 It's a very unlikely setting. In the middle of an industrial estate, Mr NQN and I wonder whether we're going the right way. The only hint that we are is the other car that is driving purposefully so we follow it disappearing further up into the maze of industrial buildings. And suddenly, we turn the corner and we see the sign for Star Noodles and then the queue of people outside that tells us that we've arrived at the right place. 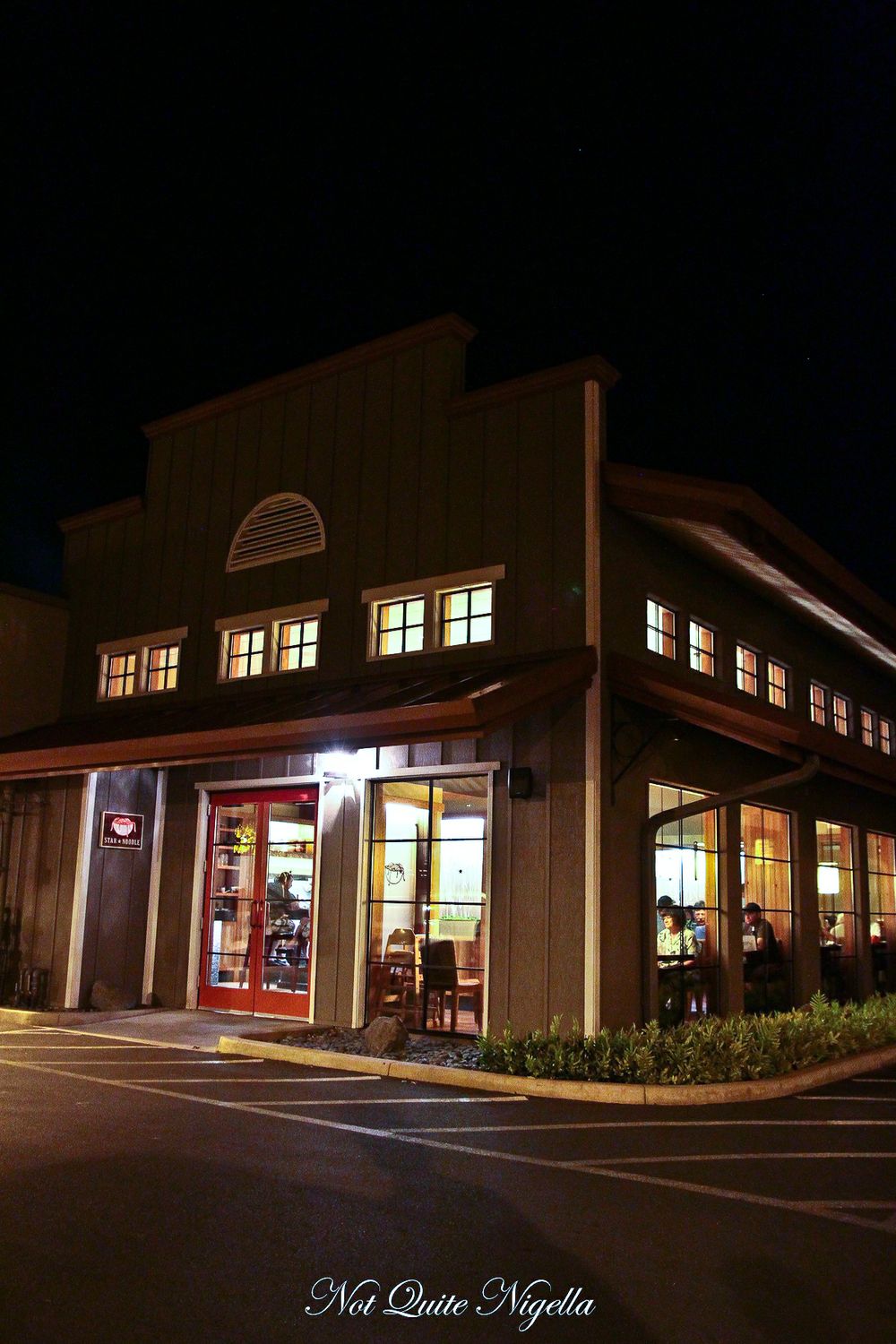 There's a sizeable crowd at 6:30pm and they're all waiting for a table. We put our name down and are told that the wait could be between thirty to forty minutes. It's quite small inside so we take a seat in the car park outside and wait. Forty minutes later, they call our name and we enter. The interior has touches of Japan with grey stones and bamboo coloured wood. 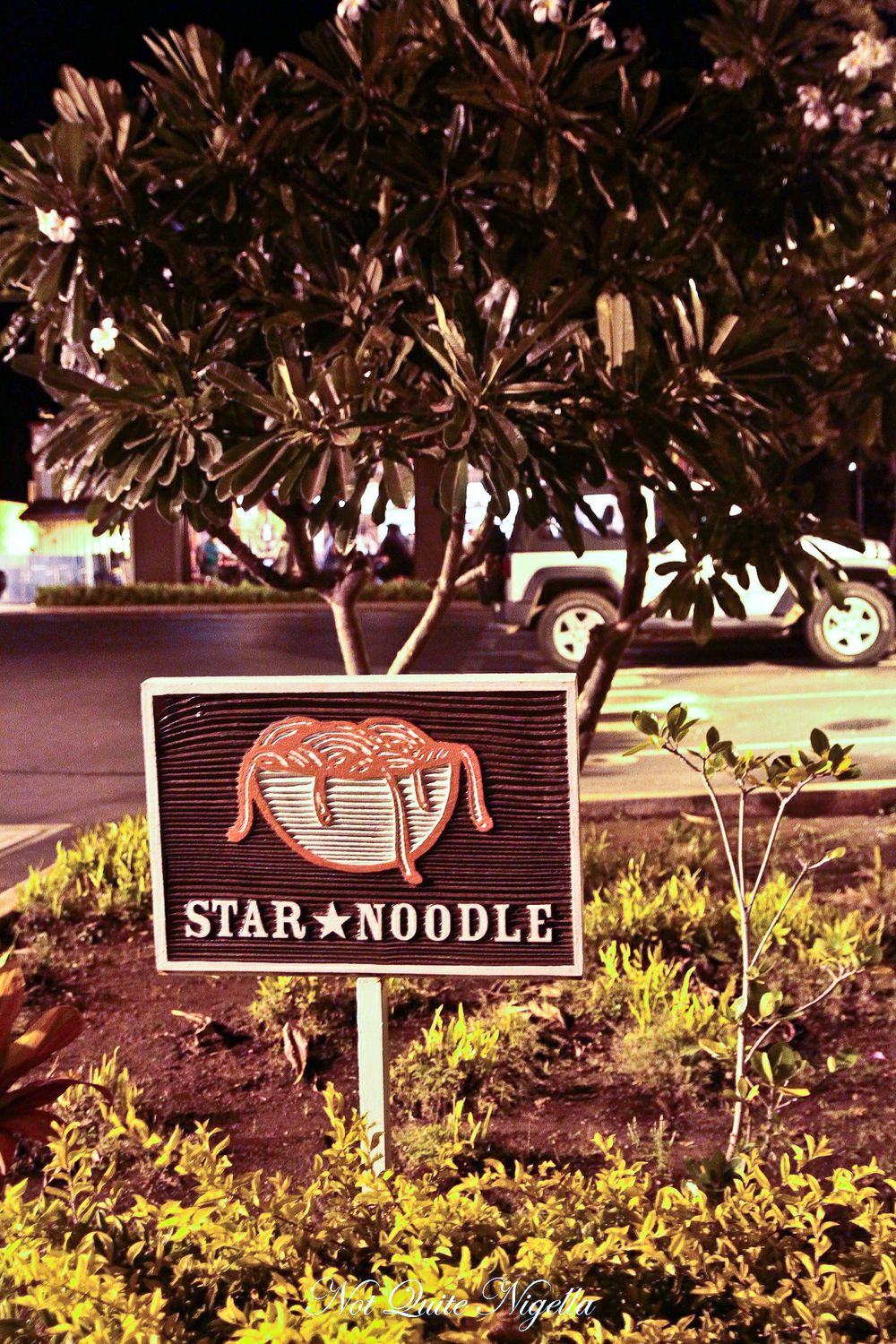 Chef Sheldon Simeon is currently appearing on Top Chef and diners appear to be excited about that as we overhear snippets of conversation. Prices are very reasonable here and there's much to choose from including Vietnamese, Philippino and Japanese dishes. We place our order with our fantastic waiter and a few minutes later, our first dish arrives. 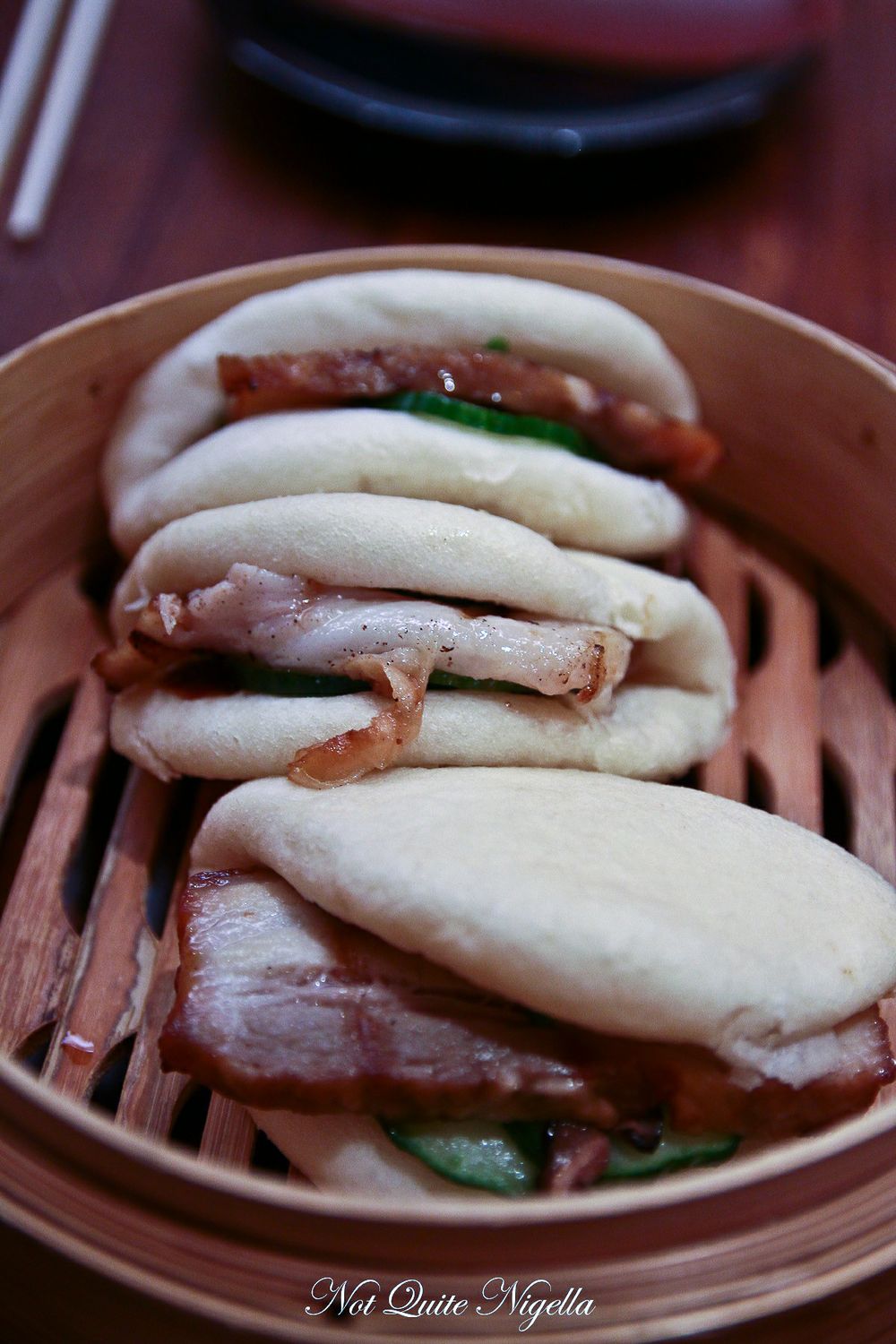 These are those softly steamed white buns, folded over and filled with a slice of pressed pork belly, hoi sin sauce, shiitake mushroom and cucumber. I love the softness of both the pork belly with the unctuous fat and hoi sin. And from her apron pocket, our waitress produces two mini squeezy bottles of sauce: more hoi sin and a mustard. I added a little more hoi sin but neither of us were taken with the mustard. 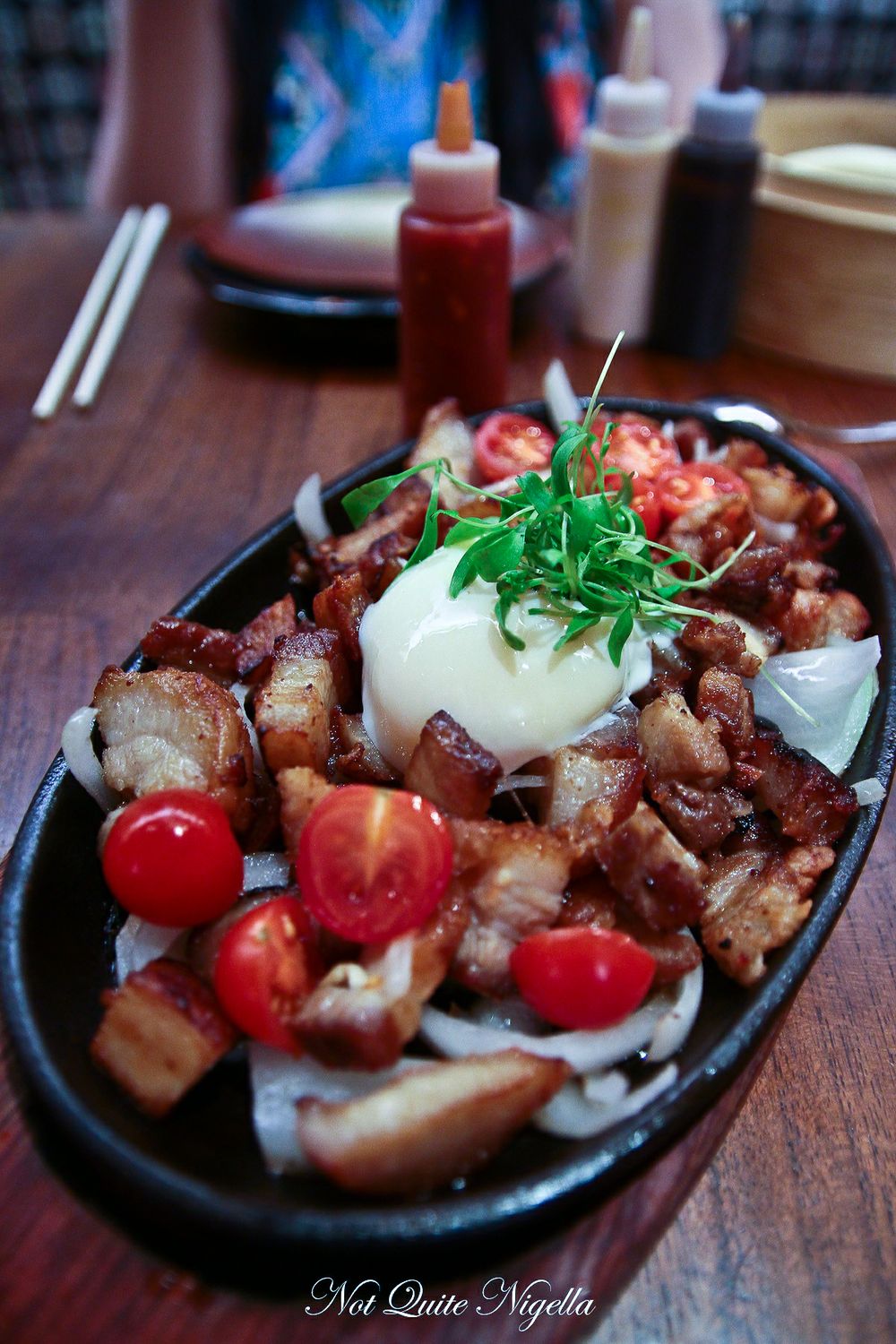 The Filipino style bacon and eggs came out on a sizzling plate with an enormous amount of crispy edged pork belly, halved cherry tomato, onions and a 62F/16.66C egg which was almost liquid throughout. We were instructed to break the egg and stir it about which we did. With this came a sambal to add some heat to it. It's good,especially with the sambal and we find the serving large and rich. 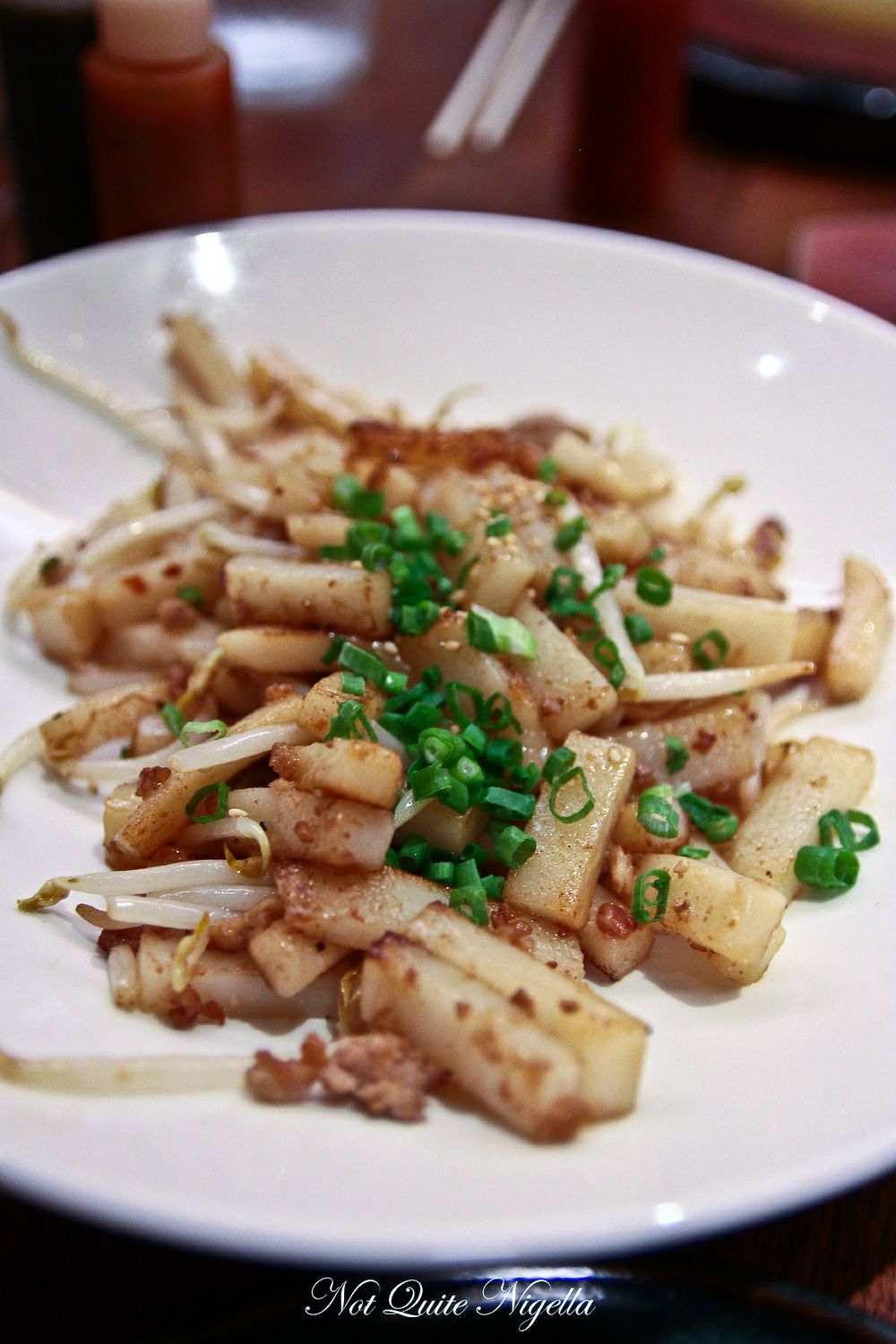 Mr NQN was more a fan of this than I. Not really a soup as such, it's tapioca noodles sliced up and pan fried and topped with pork, bean sprouts and green onions. I would have loved a bit more time on the pan for this so that it got crispier. It too comes with its own DIY sauces: a soy sauce and sriracha and is apparently a local's favourite. 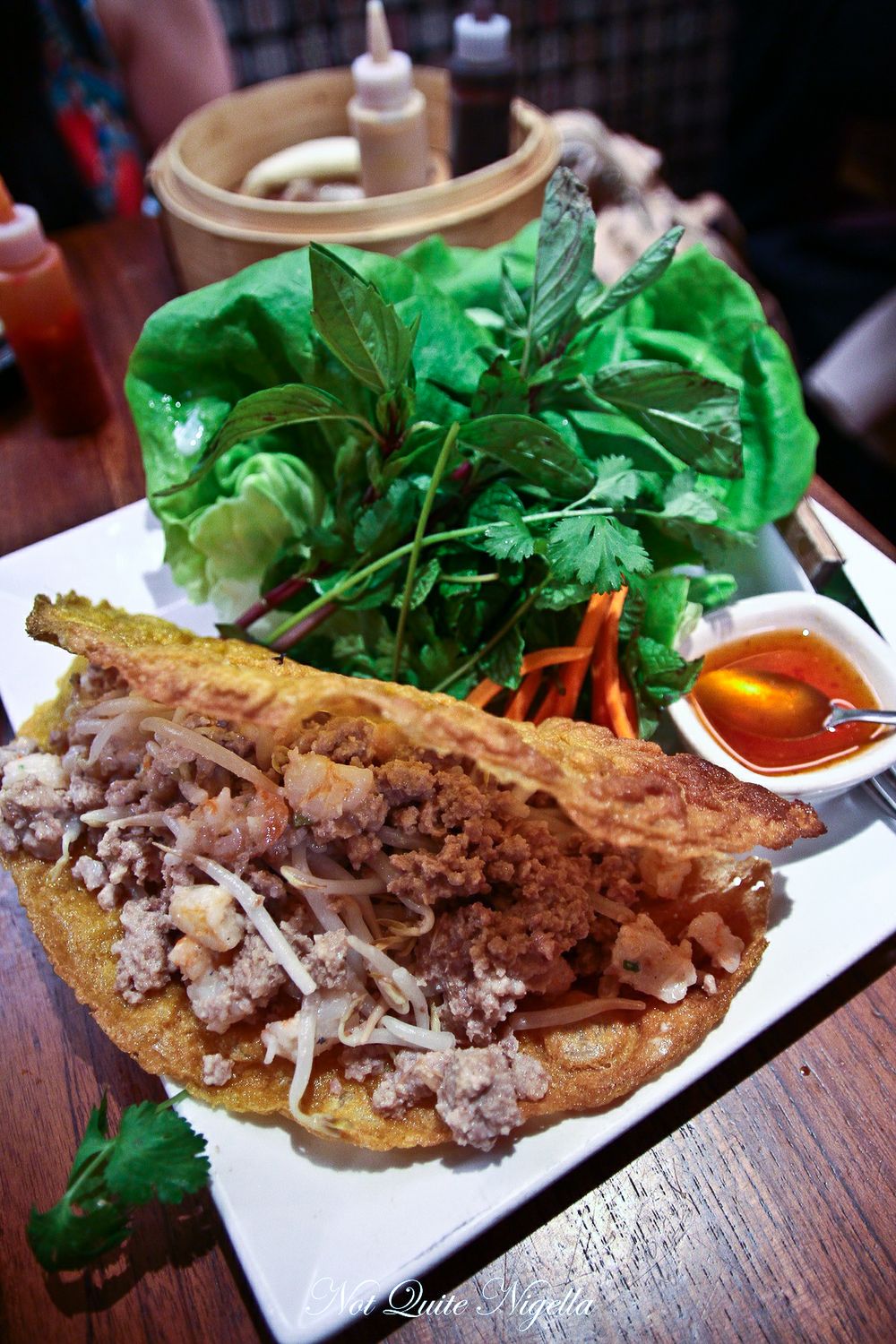 The crepe was definitely the most ordered dish as we saw plate after plate of this go past us. The crepe was filled with pieces of prawns or shrimp, minced pork and bean sprouts and comes with soft butter lettuce leaves, mint, coriander, carrot and Thai basil and their own Thai sweet chilli sauce. We do have so many versions of this back in Sydney and this one is different. The crepe is deep fried and tastes like a spring roll wrapper rather than the divinely soft, pliable mung bean flour and coconut crepe.

Their instruction was to fill a lettuce leaf with the prawns and pork and then add the herbs and sweet chilli sauce to it whereas at home, we fill the crepe with the herbs and salad and add nuoc cham, a less sweet Vietnamese chilli and fish sauce. I preferred the filling without the addition of the lettuce and herbs and just seasoned with the chilli sauce rather than filled as a lettuce wrap. In fact, I liked the flavour-laden Filipino pork and eggs added to the lettuce leaves with the sweet chili better in the lettuce wraps. 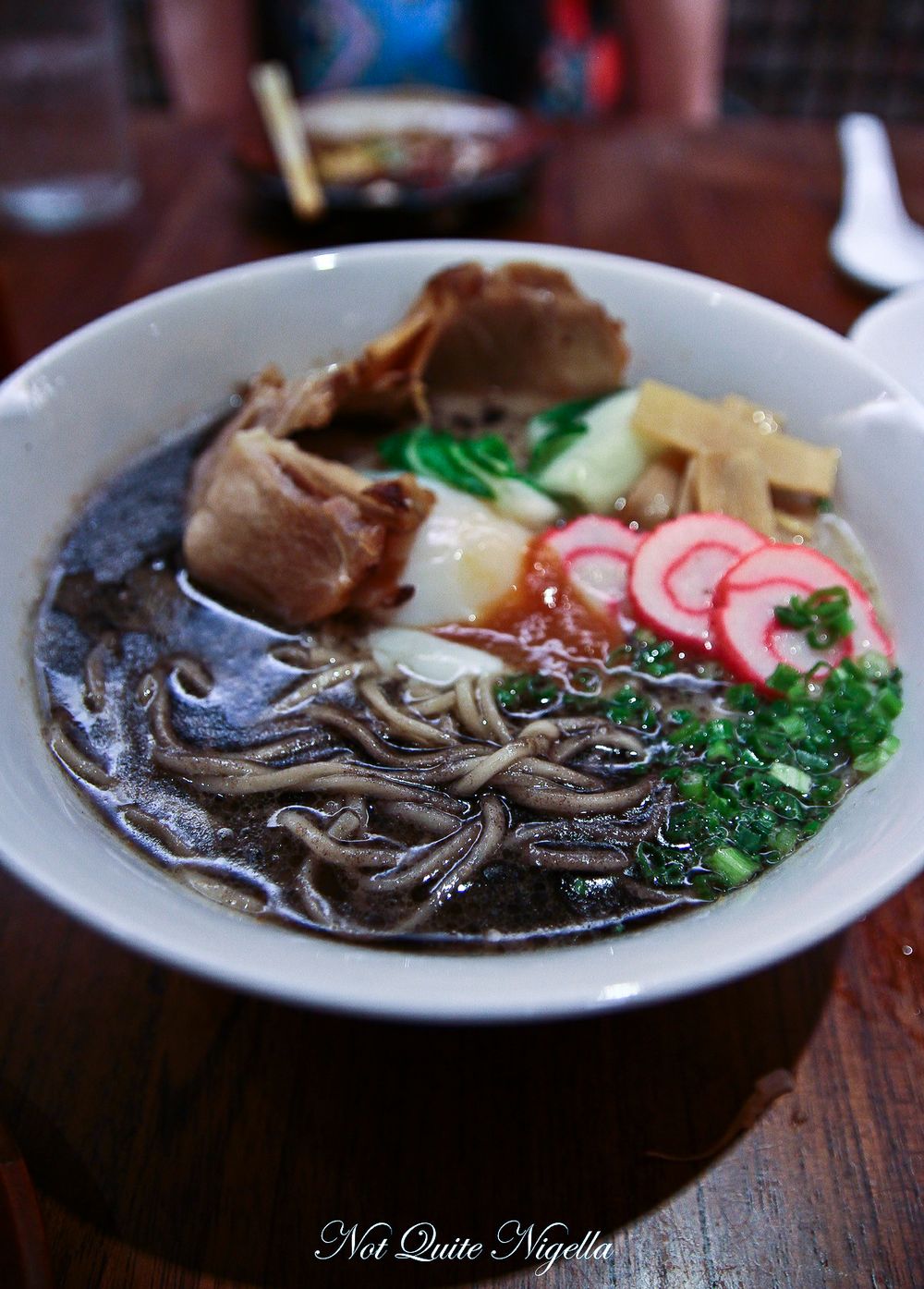 The Hapa Ramen ("hapa" the term for Hawaiians that are mixed race or half/half) comes out with a thick broth. Our waiter tells us that the soup is made from bones that they get daily from a pig cooked in an imu (much like a hangi). The broth is rich, thick and good and comes with a poached egg, pork slices, bamboo shoots, kamaboko (that pink and white Japanese seafood stick), crunchy baby bok choy, mayu and spicy miso (although this isn't really spicy at all). The noodles are also house made and they've got a nice springiness but once Mr NQN adds some sriracha, the flavour really comes alive. 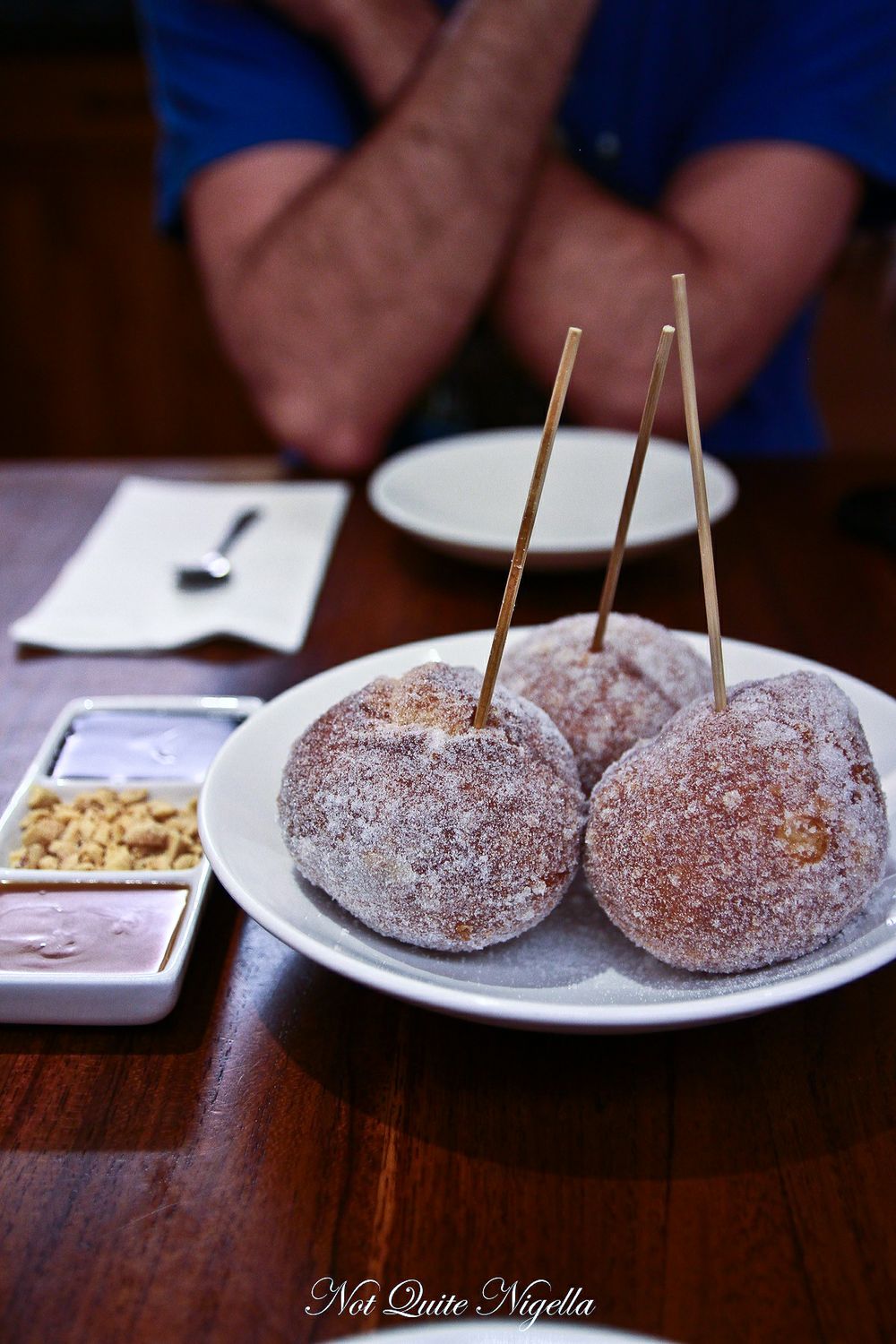 We couldn't resist but try the Malasadas which are Portuguese donuts. The serve is large- three enormous deep fried donutty balls served with a chocolate and butterscotch sauces and chopped roasted peanuts. They are made to order so they take about ten minutes from when you place your order until they hit the table. They are fresh and large but their size makes them impossible to finish, and we both preferred them with the butterscotch caramel sauce. 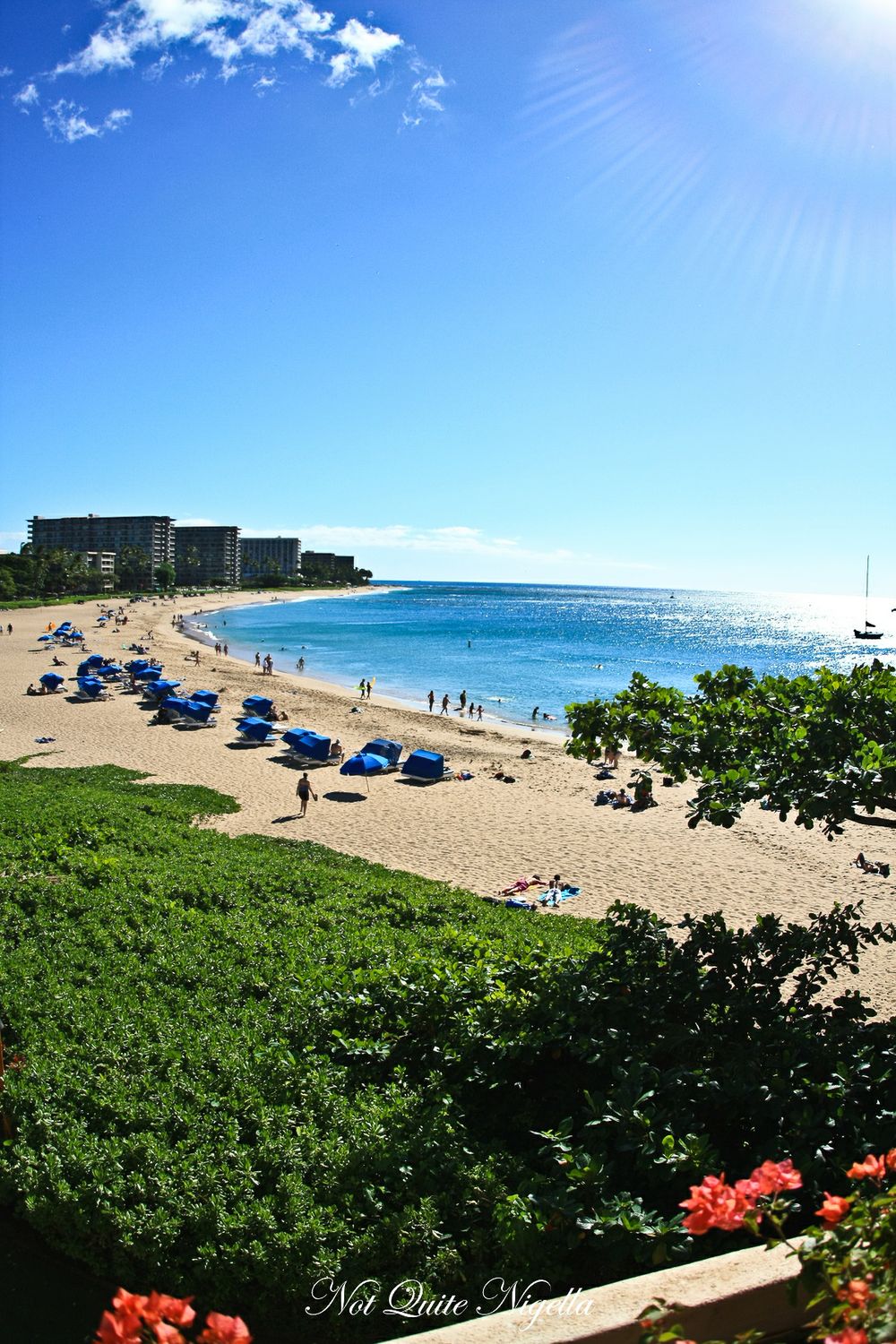 We have now moved to the Sheraton in Maui, just a few doors down from the Kaanapali Beach Hotel and near the Westin. It is the last hotel on the beach stretch and its beach stands alongside Black Rock where their famous cliff diving ceremony occurs every evening. 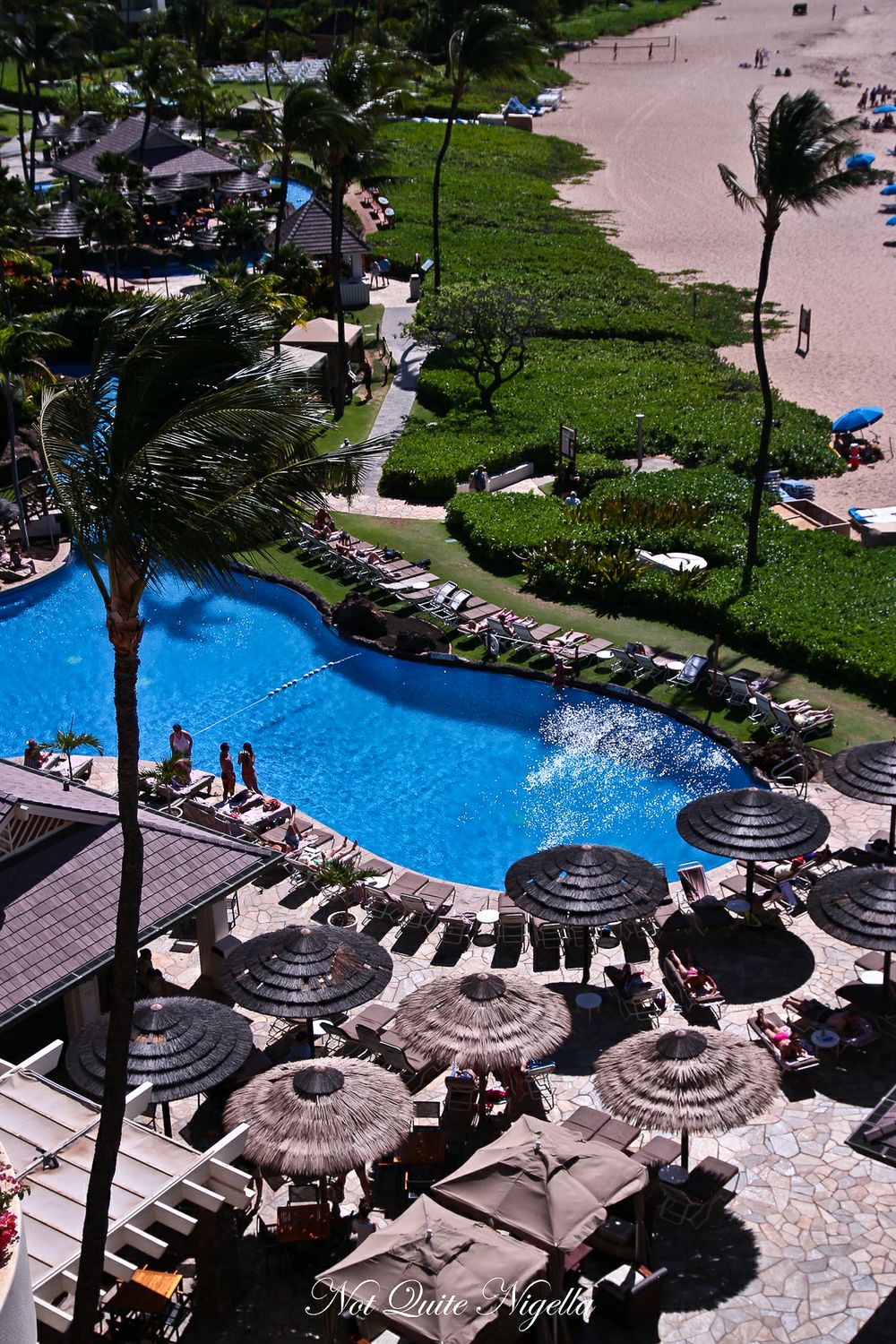 We have an Ocean View room (#4314) on the 23 acre resort with 508 rooms. It was the first hotel to be built on Kaanapali Beach and we are in the section which is actually built into black rock. Our room is right at the end of the hotel and the balcony faces black rock for a superb view of the cliff diving ceremony. 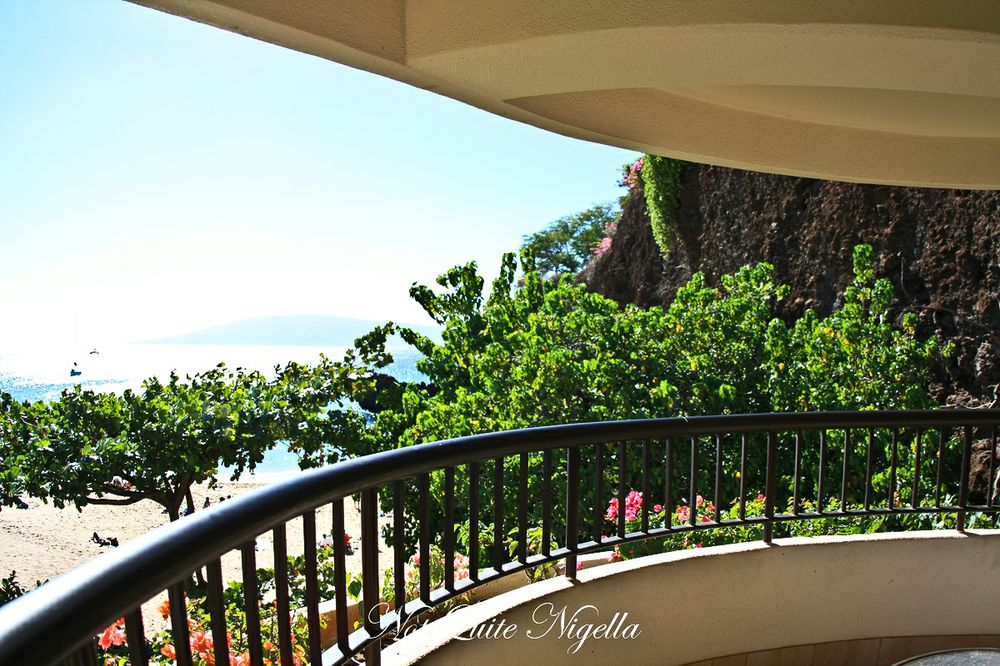 The building built against the black rock

They have free internet in the lobby (hooray, a rarity in Hawaii!) and the resort charge ($30 a night) covers wireless internet all through the resort, valet parking for first night and self parking for the remainder, island telephone calls, adult pool floats and cultural activities. 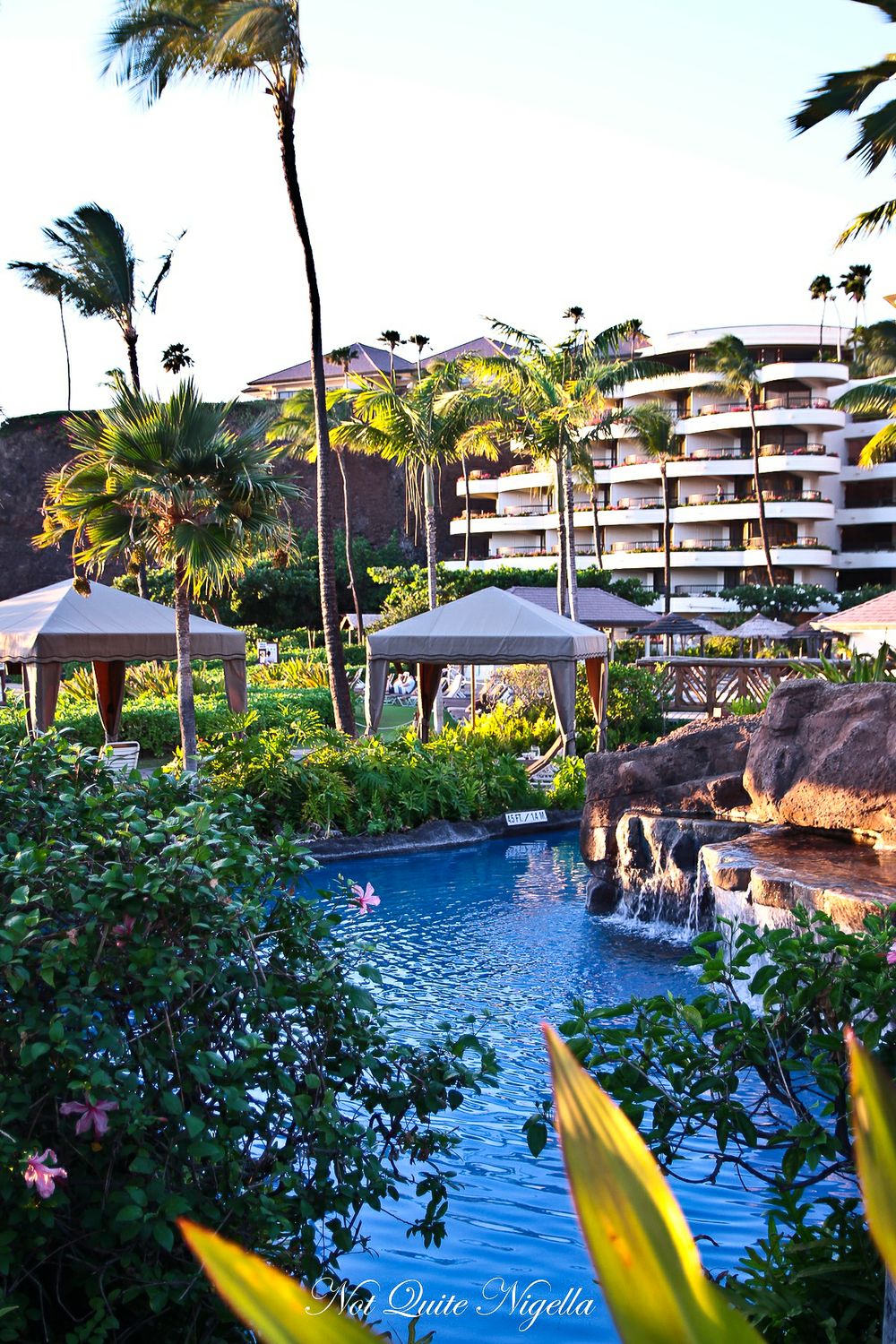 Our room has a balcony and a king bed with comfortable pillows. The bathroom has a bath and shampoo, conditioner, body lotion, shower gel and soap and a separate bath. A drip coffee maker has two sachets of Kona coffee, and two tea bags. There are sachets of sugar, sweetener and non dairy creamer as well as little pods of half and half (half milk and cream) and the cups are takeaway coffee cups with lids. I prefer to drink a cup of tea at leisure time permitting, but perhaps people are more "on the go" here. 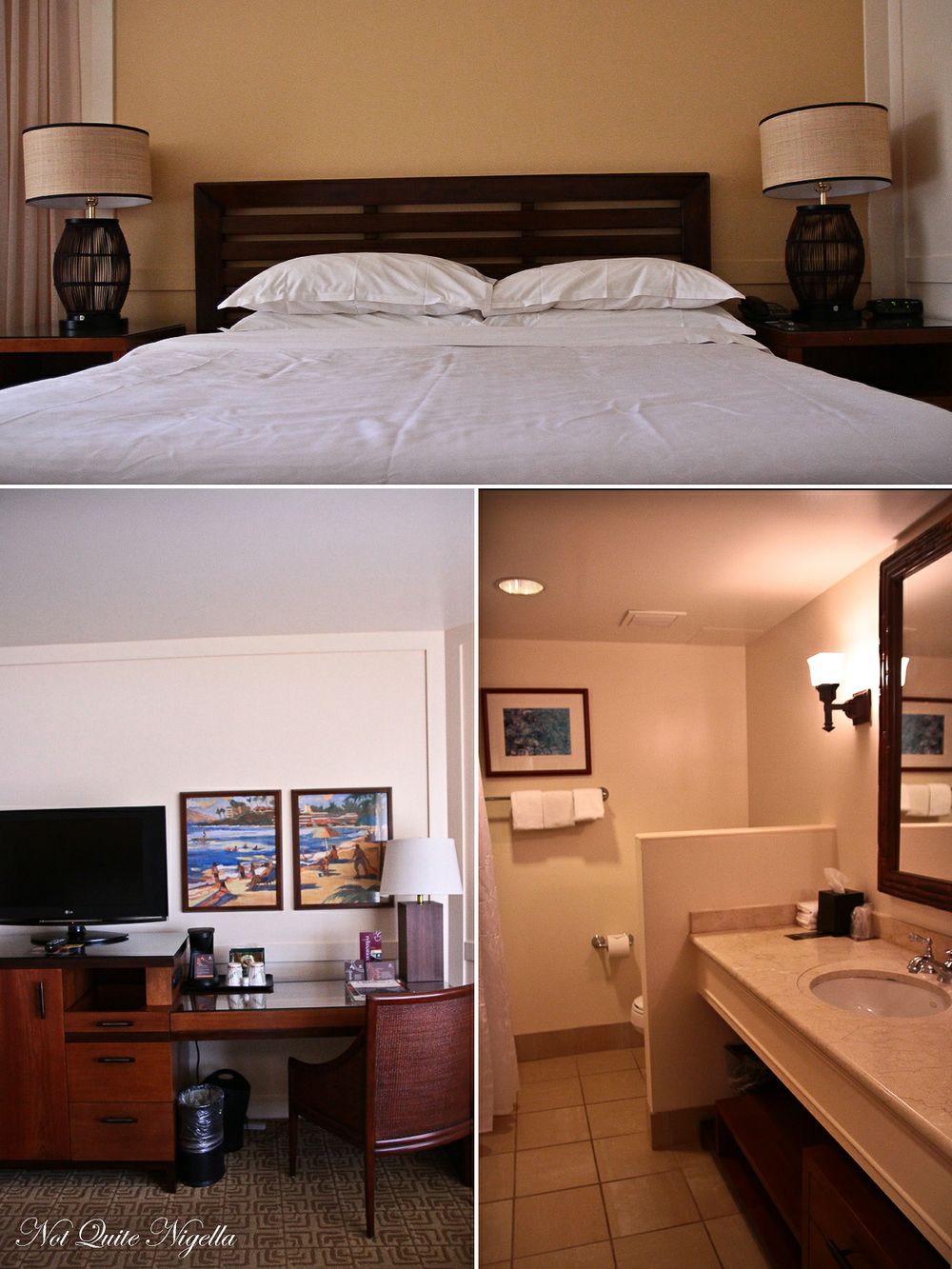 Interestingly, none of the hotels seem to provide shower caps (I guess it's hot so your hair dries quickly) and both mini bars appear to be empty so perhaps that's how they do things here. There's a large television and they have Showtime (doh, just missed out on the episode of Dexter :(! ). We did find that the housekeeping here was quite basic and just consisted of just making the beds and there was no work done on any other areas including clearing the bins, replacing toiletries or straightening up, even if a tip is left. 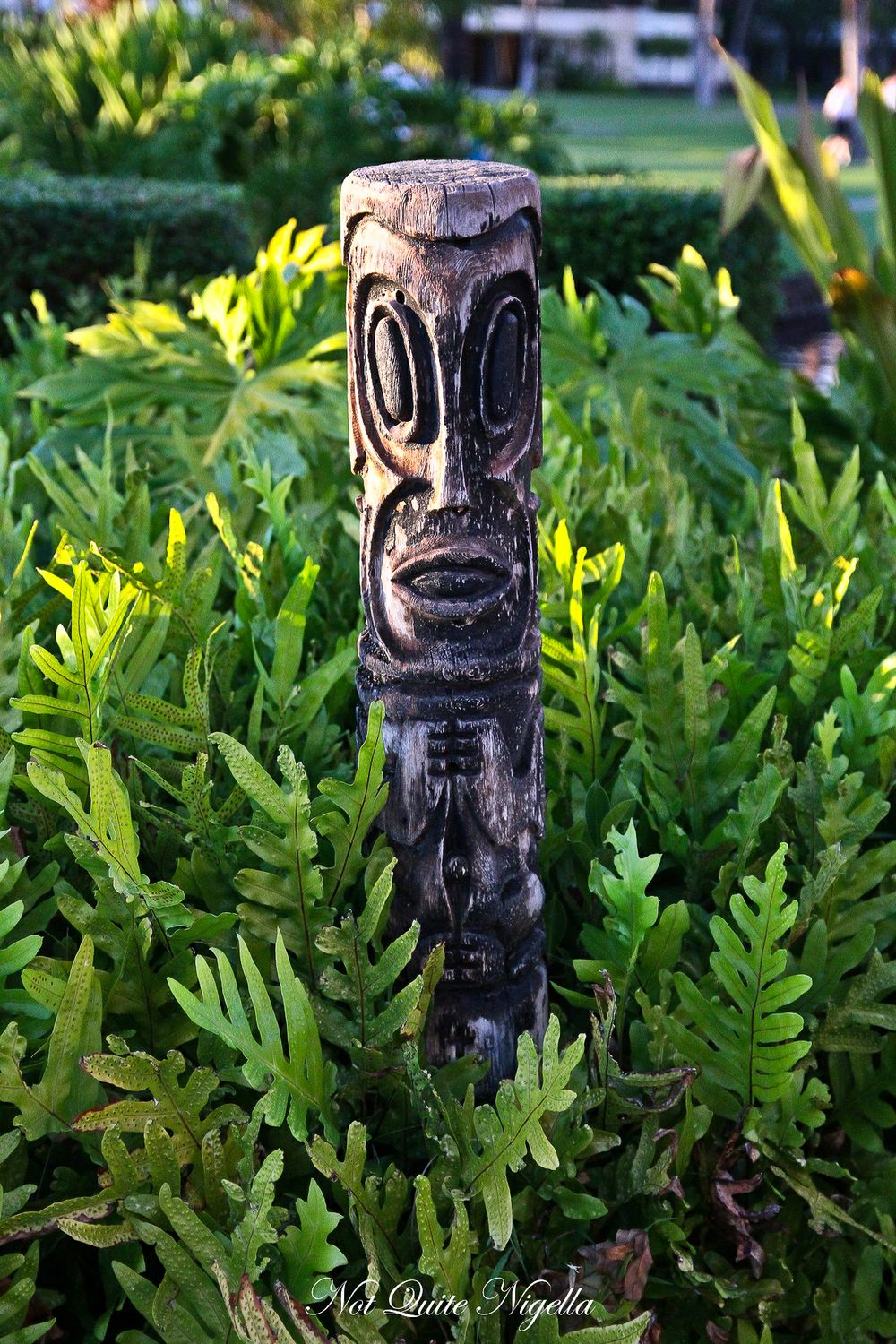 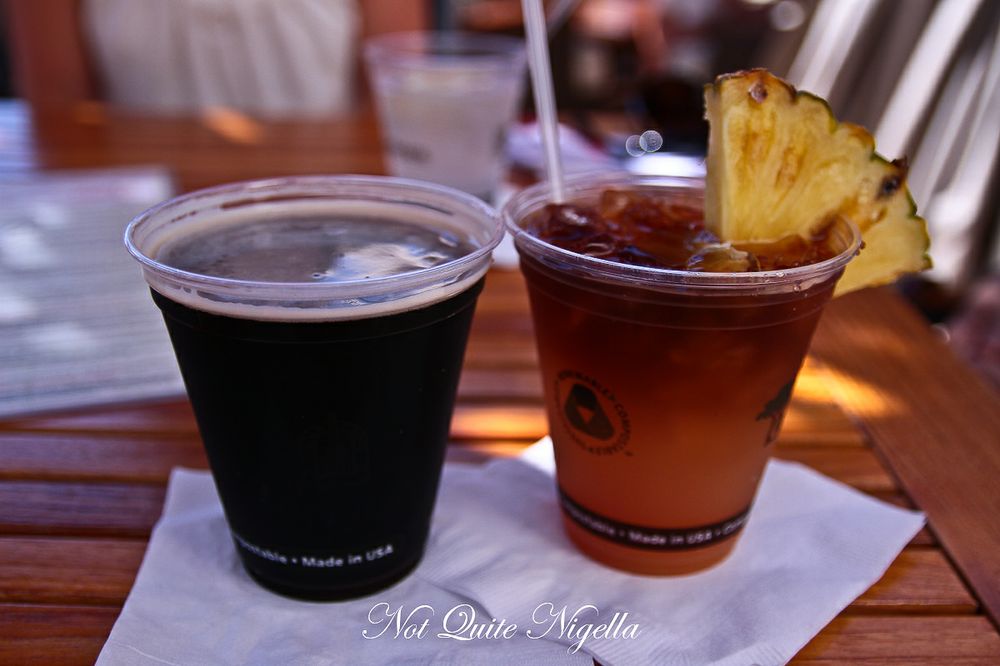 The next morning, we head downstairs to have lunch at the Mai Tai bar. The hotel buildings were apparently built so that none rose above the height of a palm tree. I choose their 4th of July contest award wining Ciso passion fruit Mai Tai-there are four Mai Tais on offer and this is sweet and drinkable with a potent kick to it. Mr NQN tries one of the Black Rock beers, brewed specially for the Sheraton by Maui Brewery which looks deceptively dark but is quite nice indeed. Everything from the cups to the trays are plastic and perhaps that's because of the nearby pool. 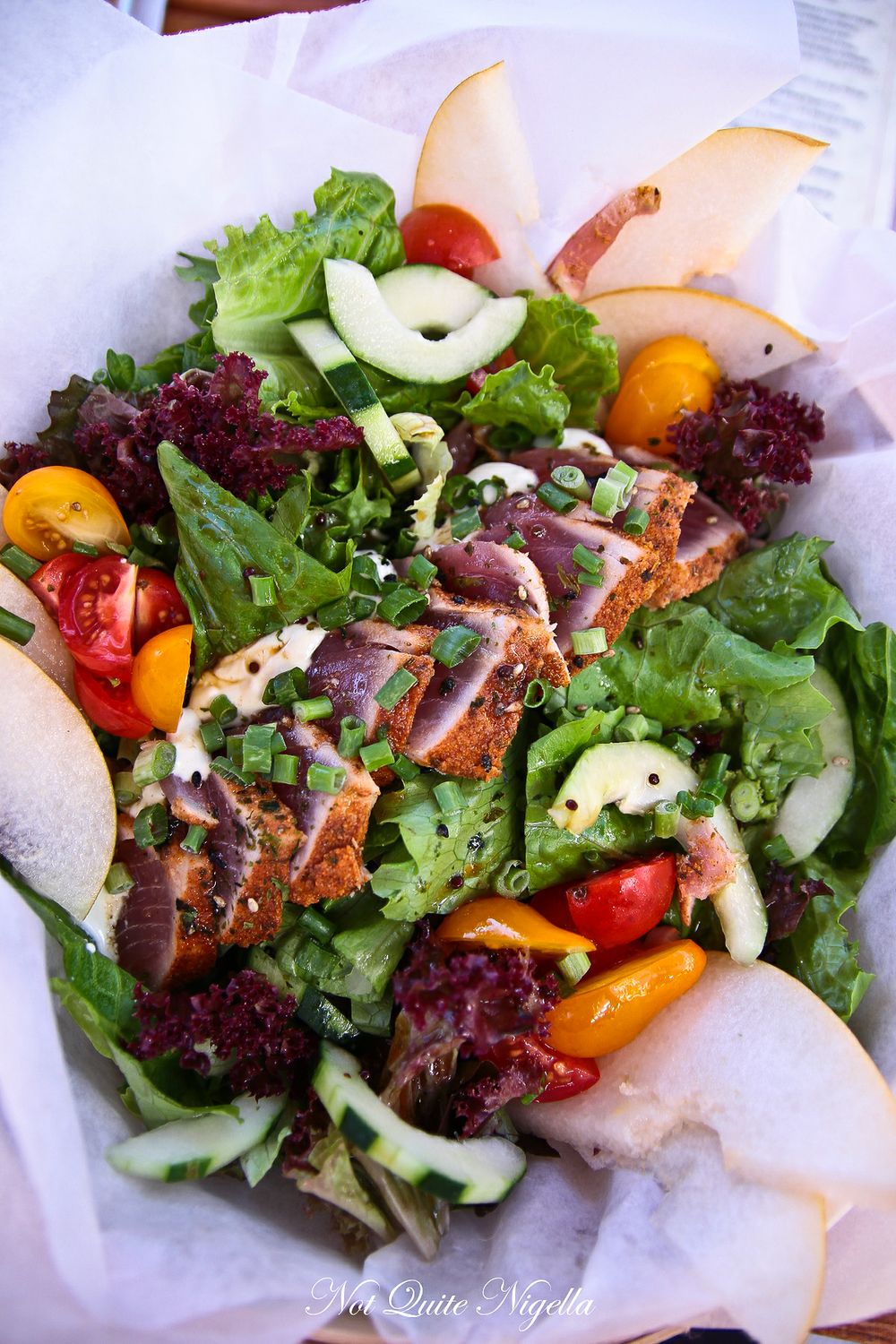 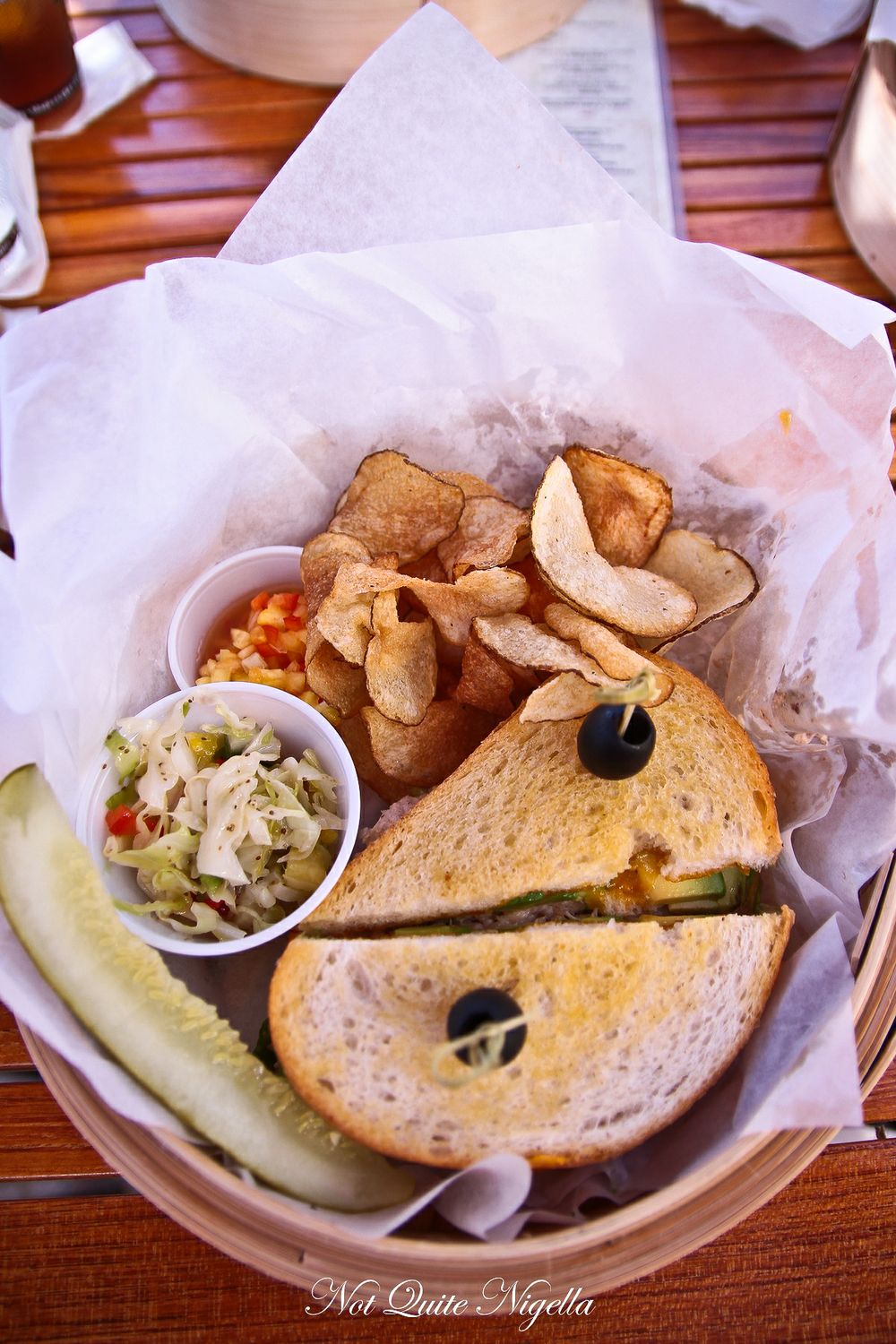 I was watching Ina Garten on television making crab cakes half an hour before lunch so I had to go for the crab cheddar melt on toasted sourdough bread with avocado. The crab filling has a very generous amount of crab, about a centimetre's worth and it's rich and indulgent. The pineapple and papaya salsa comes as a little container to the side but my favourite to add to the sandwich was the coleslaw with a non creamy dressing. The sandwich also comes with a small serve of Maui kettle chips. 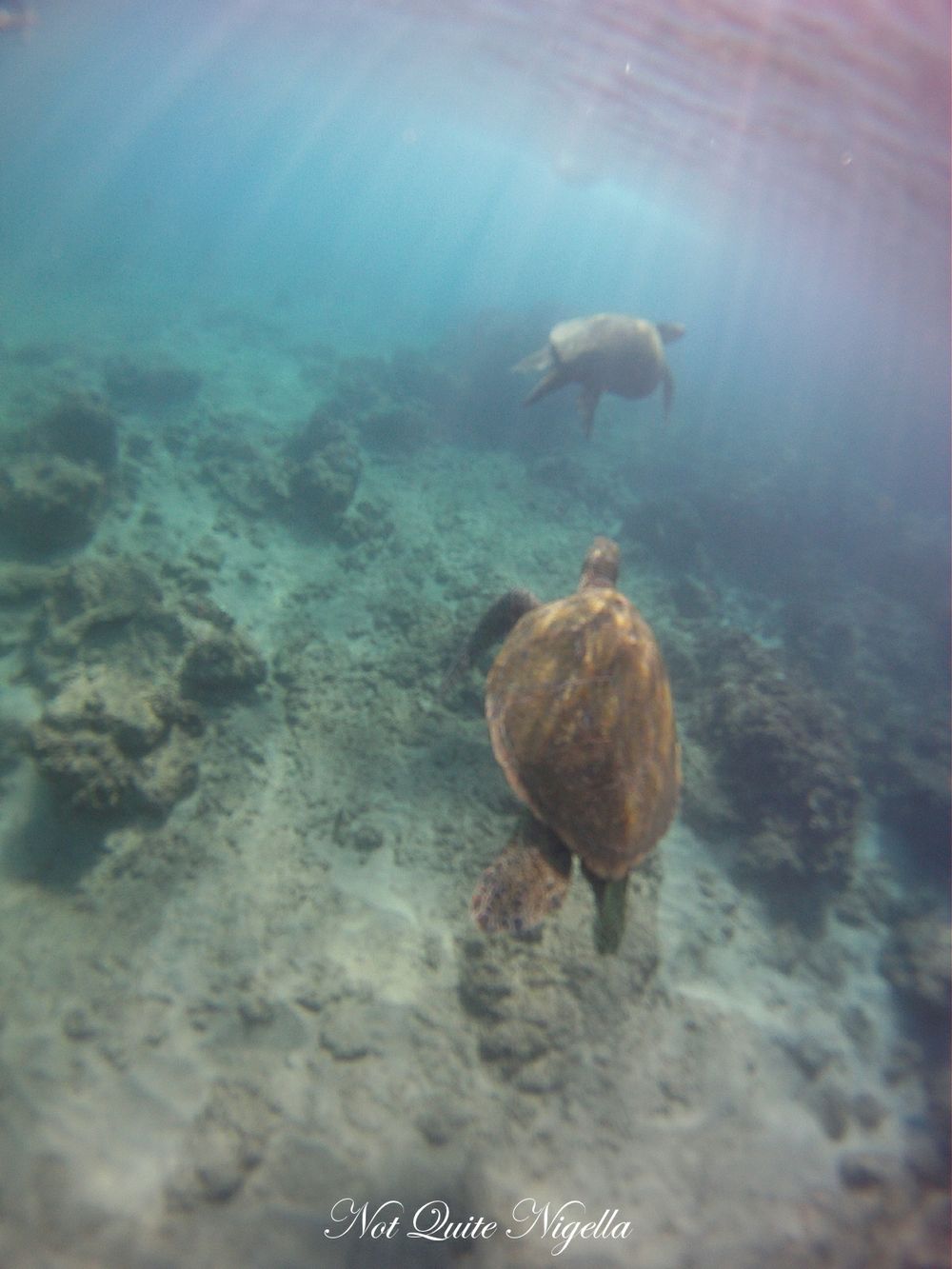 "Aren't you coming snorkelling?" Mr NQN asks me. "I don't have my shark shield thingy" I answer so he goes off to snorkel. Snorkel equipment can be hired for $8 an hour or $20 for 24 hours. About ten metres from the beach, there's a school of fish and then he comes across two turtles. He follows one for a while and comes back excited to share his photos. 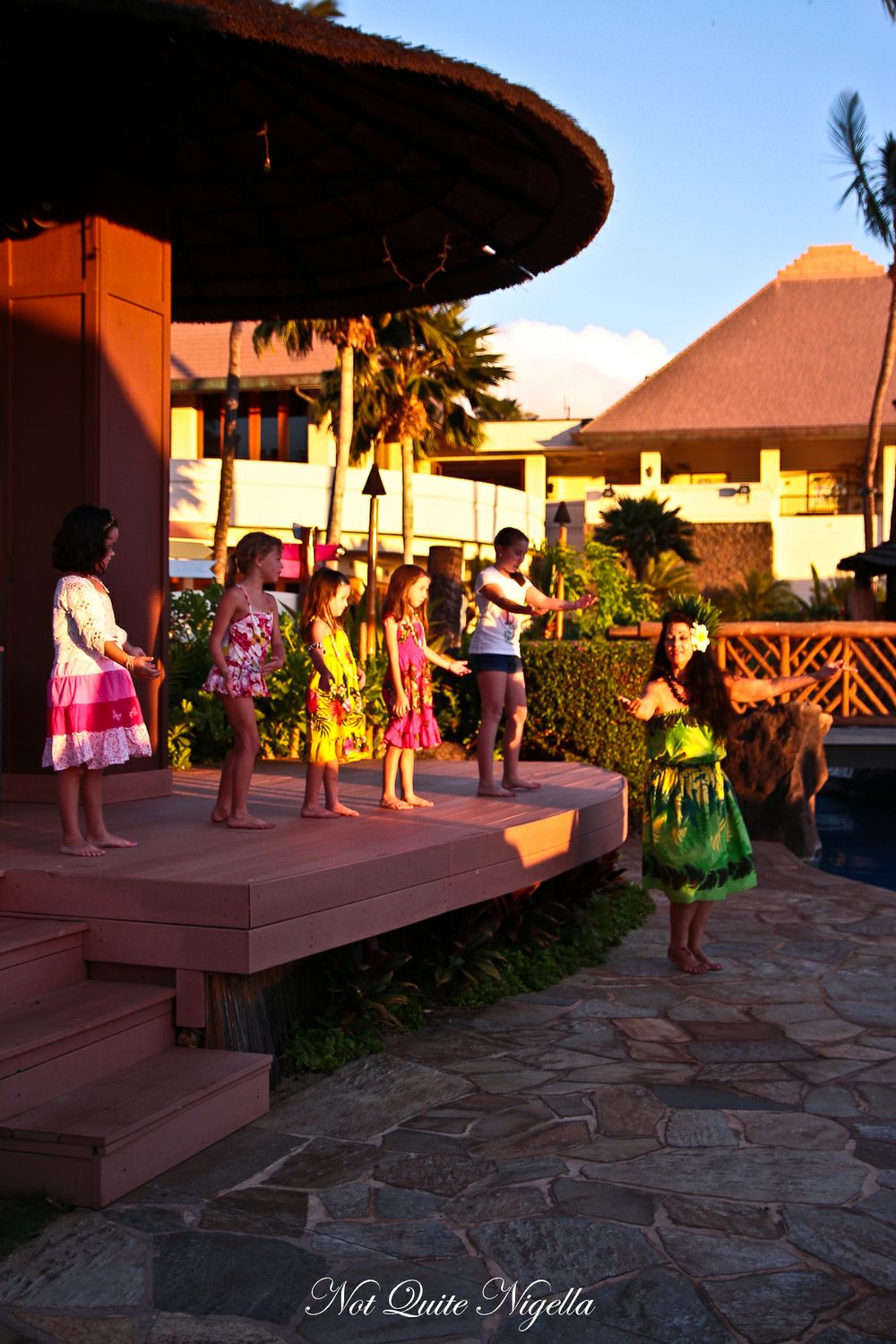 Later that evening, we watch the Cliff Diving ceremony which The Sheraton is famous for. Every evening at 5:45pm, a young man traces the steps of the revered King Kahekili who was an admired warrior that loved to indulge in the sport of Lele Kawa or cliff diving. It was said that to dive from Black Rock was to take the path of your ancestors and the dive honours him. 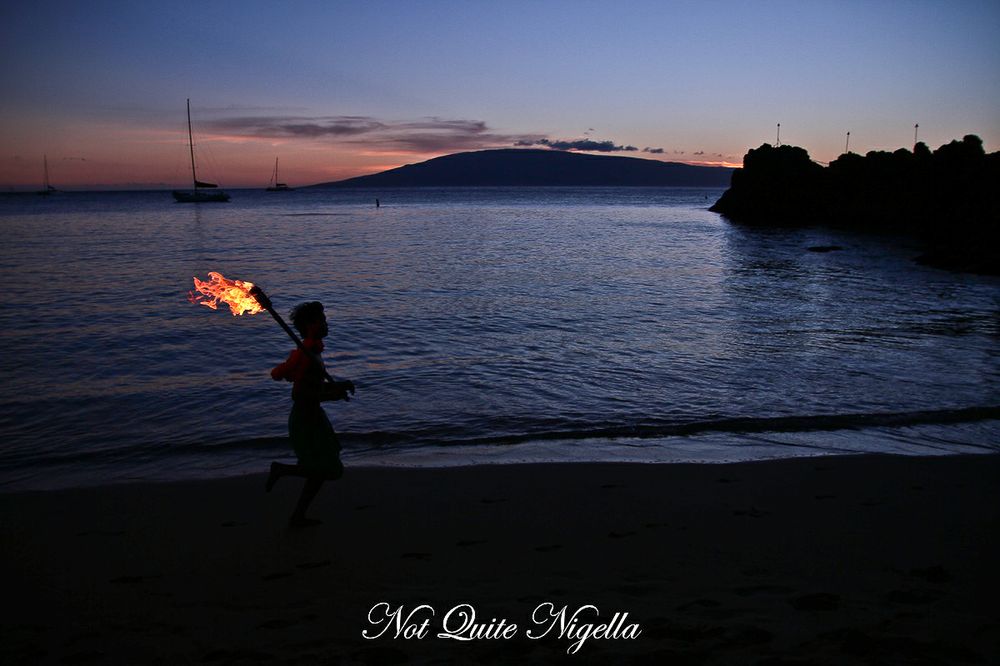 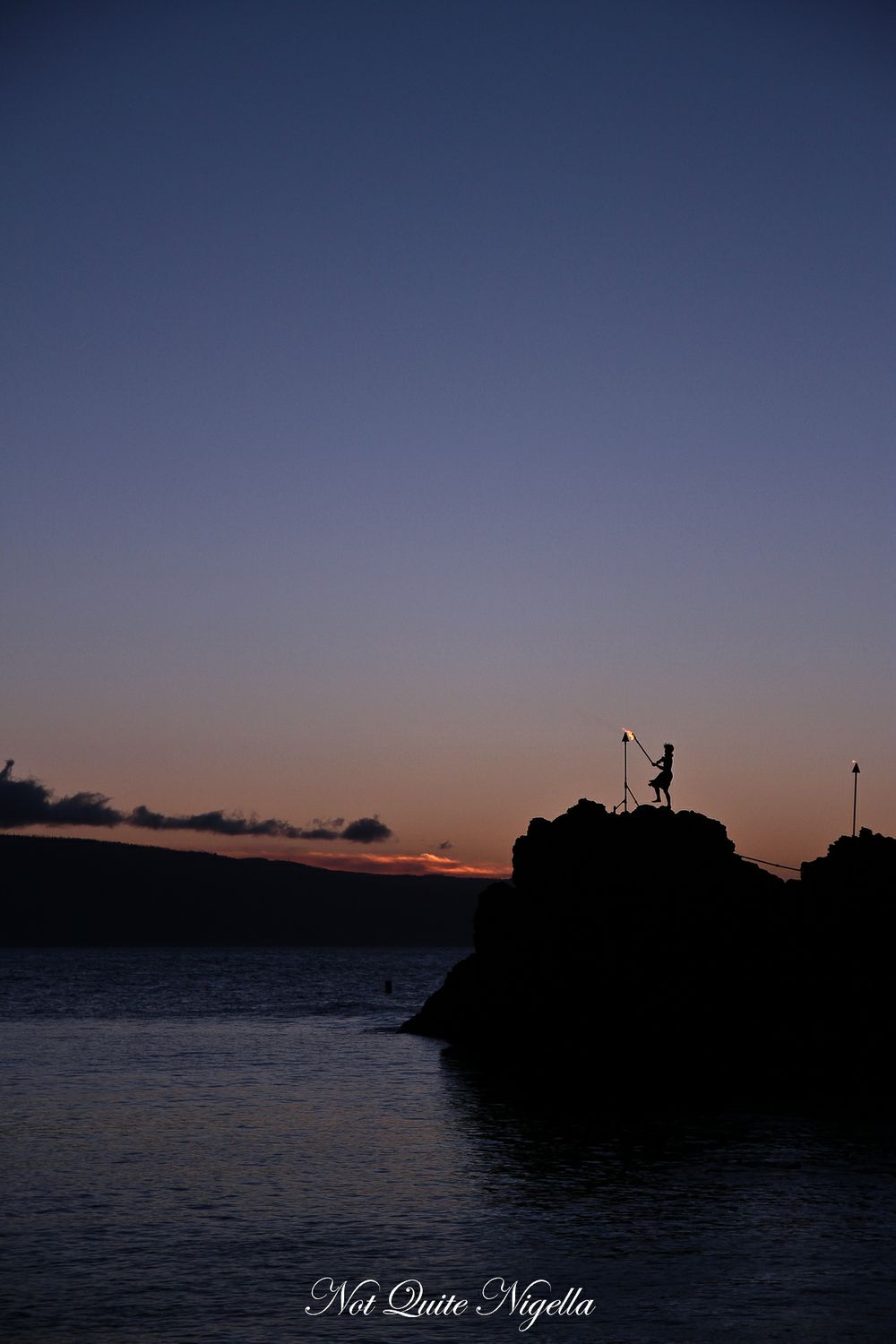 We watch as a young man lights the torches around the grounds before running along the sand. He climbs up the rocks towards Black Rock, with seeming ease (although it can't be easy to scale it holding a torch). He reaches the top and lights the three torches there. Throwing the lit torch into the water, he then removes his lei and holds this above him. This too goes into the water and then seconds later, he takes a graceful dive into the water.

So tell me Dear Reader, do you try and visit restaurant of chefs that are on television? And do cooking shows make you hungry? 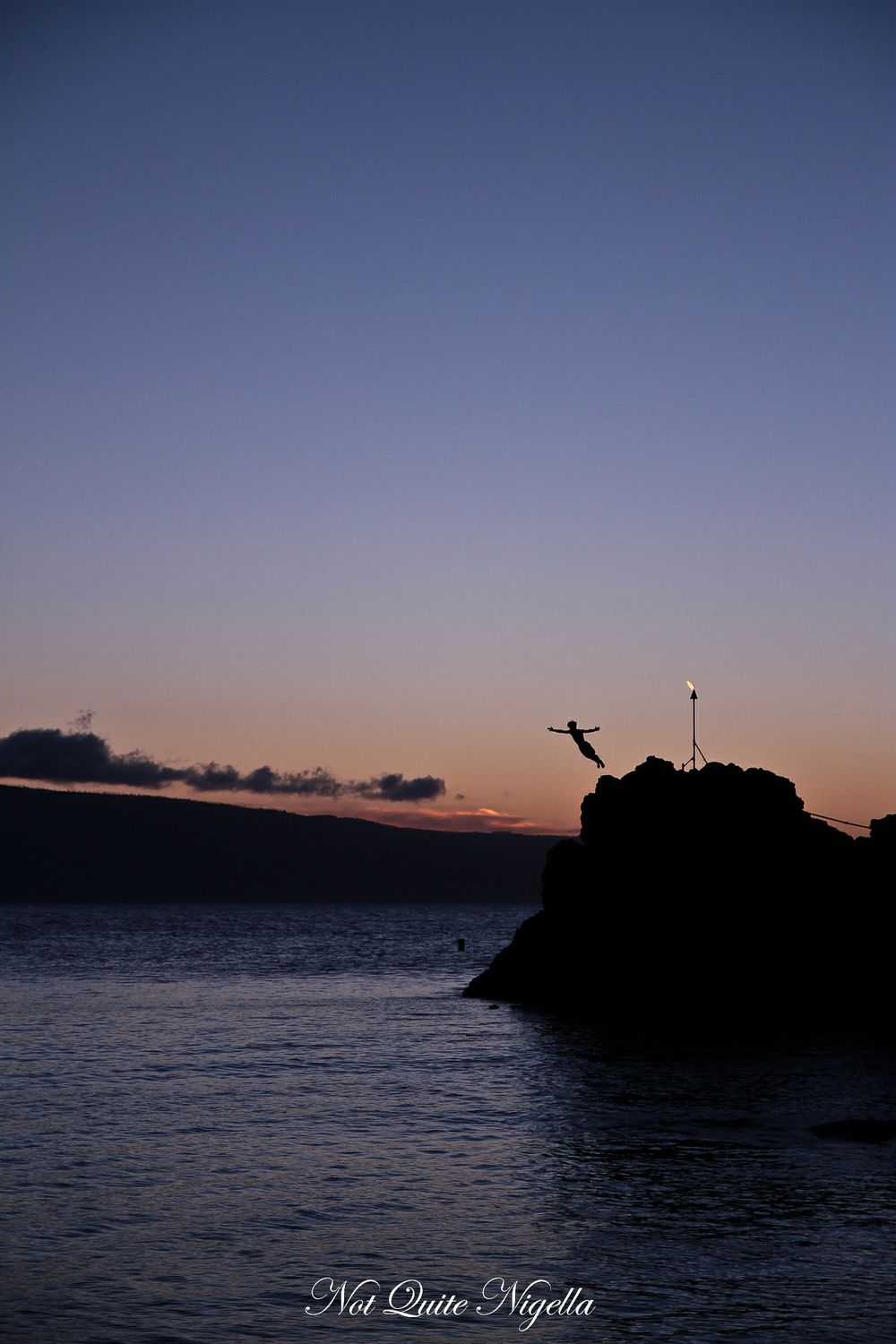 NQN travelled to Hawaii as a guest of Hawaii Tourism. The meal at Star Noodle was independently paid for. 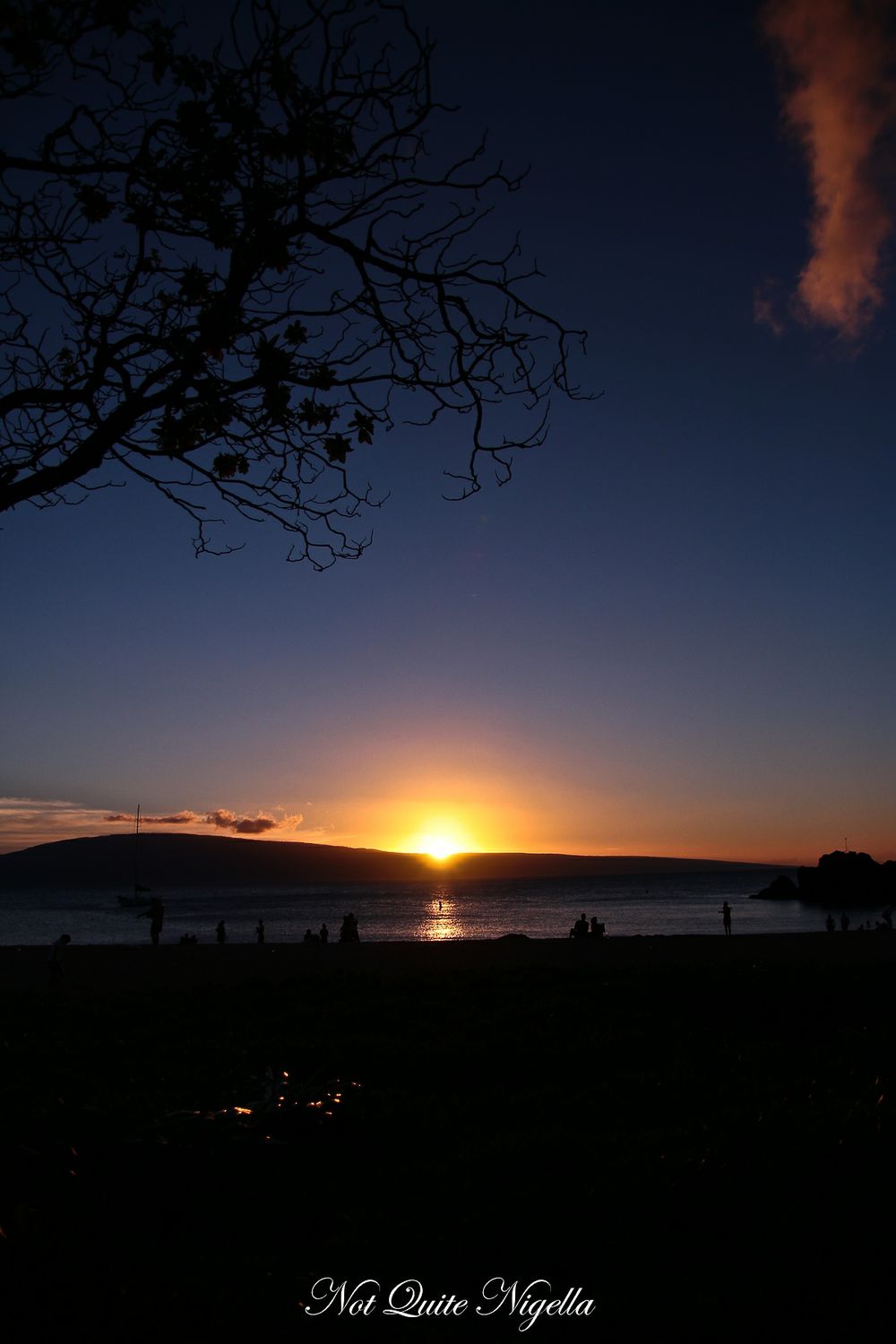