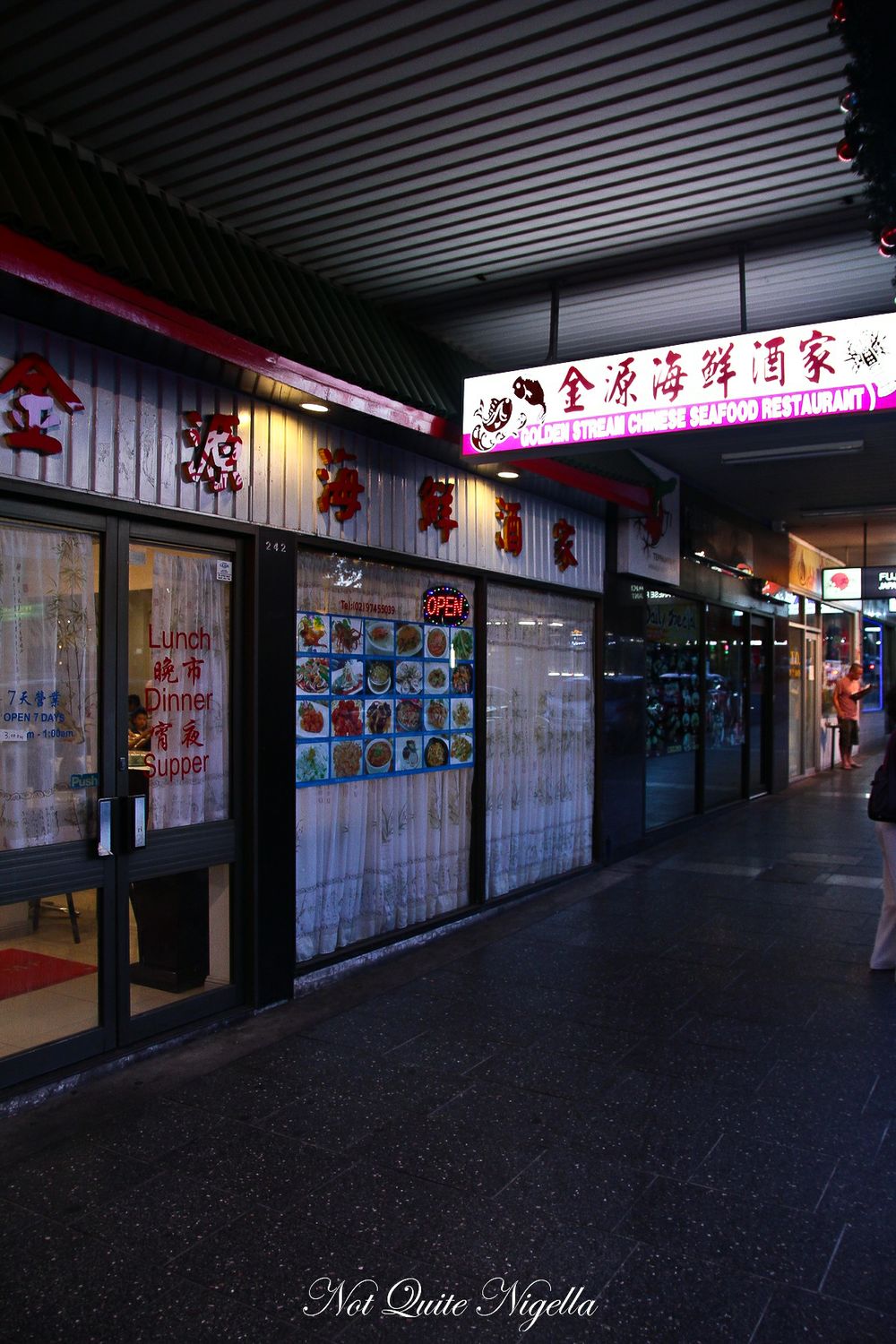 While my sister and I were growing up, my mother was a teacher. Every day we'd get reading comprehensions and she'd take out her red pen and correct them. It was always a relief whenever a paper would come back without lots of red squiggles on it. 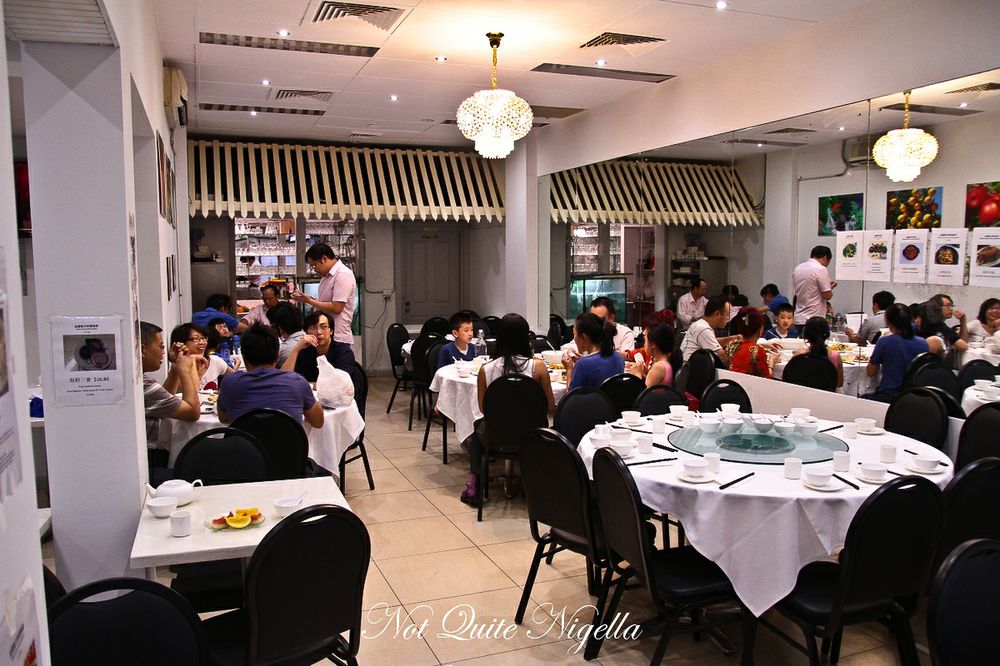 So when we're sitting down at Golden Stream and the menu cover catches my eye and hers, I can practically feel her fingers getting ready to grab the red pen. Instead of saying Golden Stream on the cover, it says Golden Strean. "Don't say anything" I whispered to her and we simply opened up the menu and pretended that the error didn't exist. Not the easiest thing for a teacher I must say! ;) 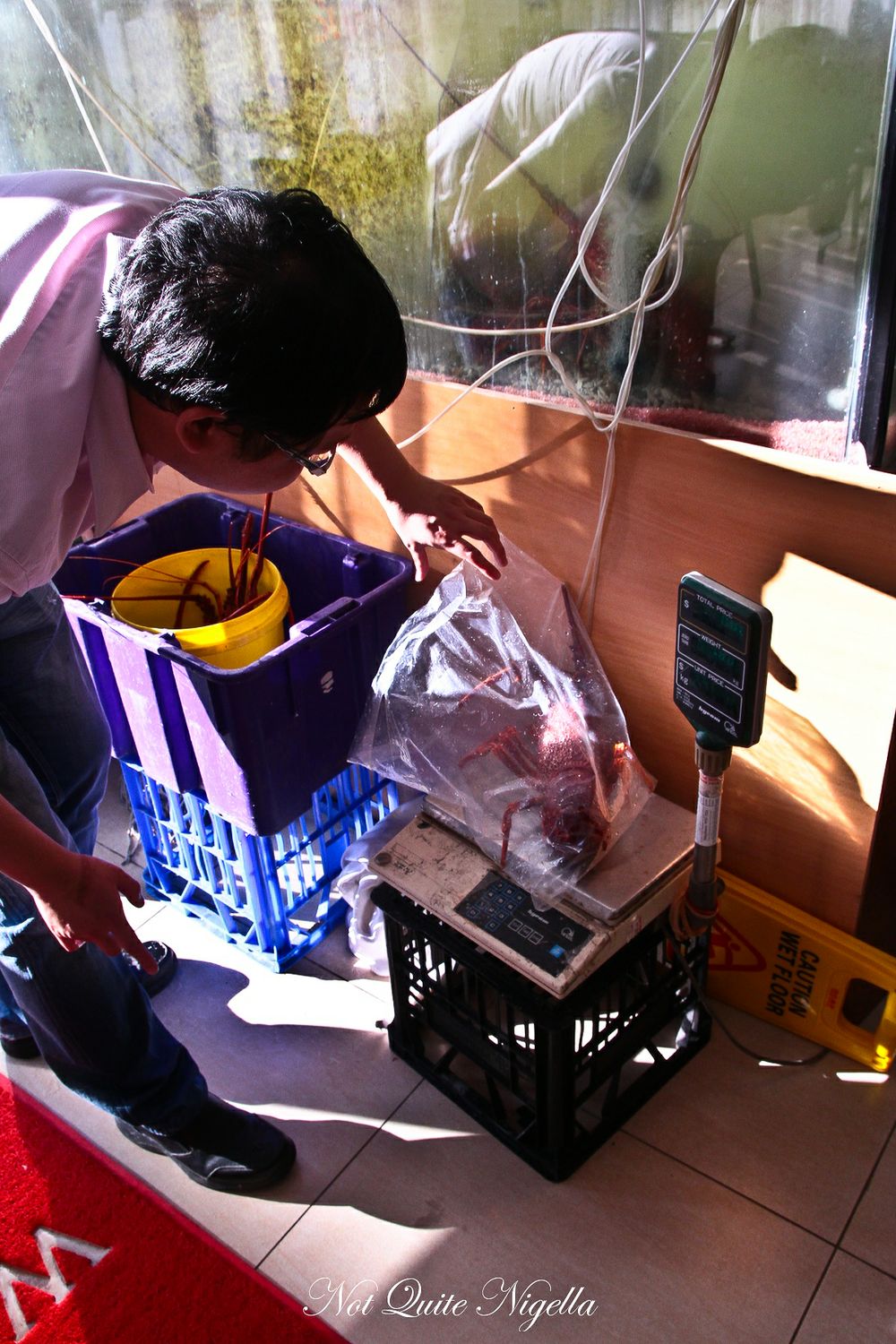 It's almost Chinese New Year and we wanted to try a new Chinese restaurant. Golden Stream on busy Burwood Road seemed a good candidate as it has seafood in the tank. An unassuming place, it's simply decorated with slightly random photos of fruit, a chicken and a golden light crossed with a spinning disco ball, there are also two tanks. One holds the lobsters while another holds fish and eel. As it isn't the best season for crab, we opt for lobster and watch as they fetch a medium sized one from the tank. It's quite small looking and after seeing a larger lobster in the tank I enquire about that one. 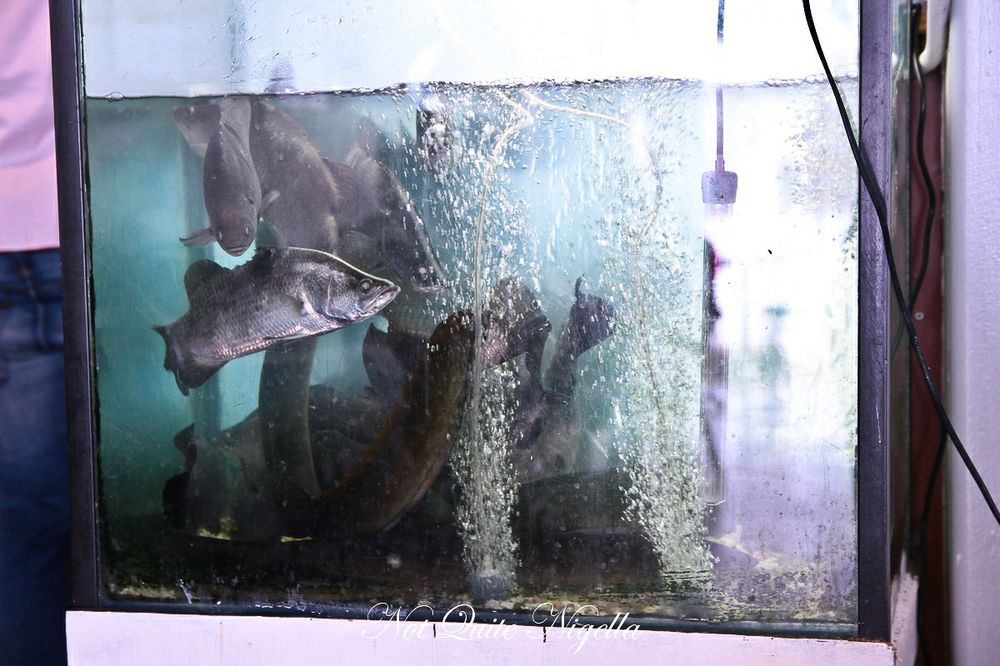 I'm told that it's a special one reserved for sashimi. For the price of $69 for 500grams, you have two course, one of lobster sashimi and the second with the lobster cooked with noodles. I tell everyone at the table and we quickly call the waiter over to see whether we can order that one instead and he quickly calls off the other lobster who is quickly deposited back into the tank to live another day. 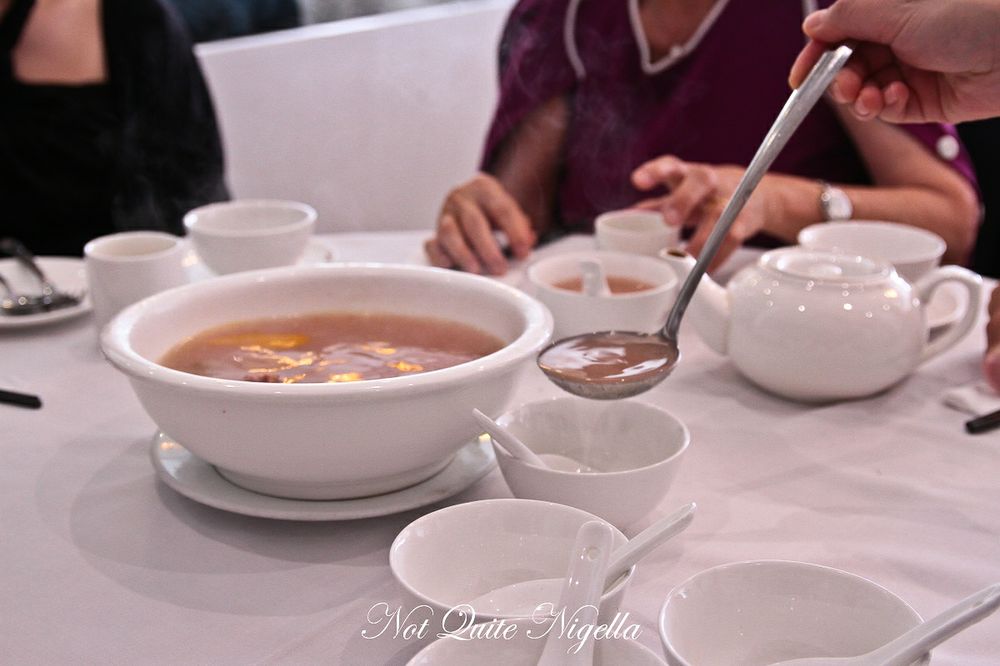 The hot soup arrives first and it's one of those nice complimentary courses to get the taste buds going. This pink hued soup is sweet with sweet potato and pork bone broth. 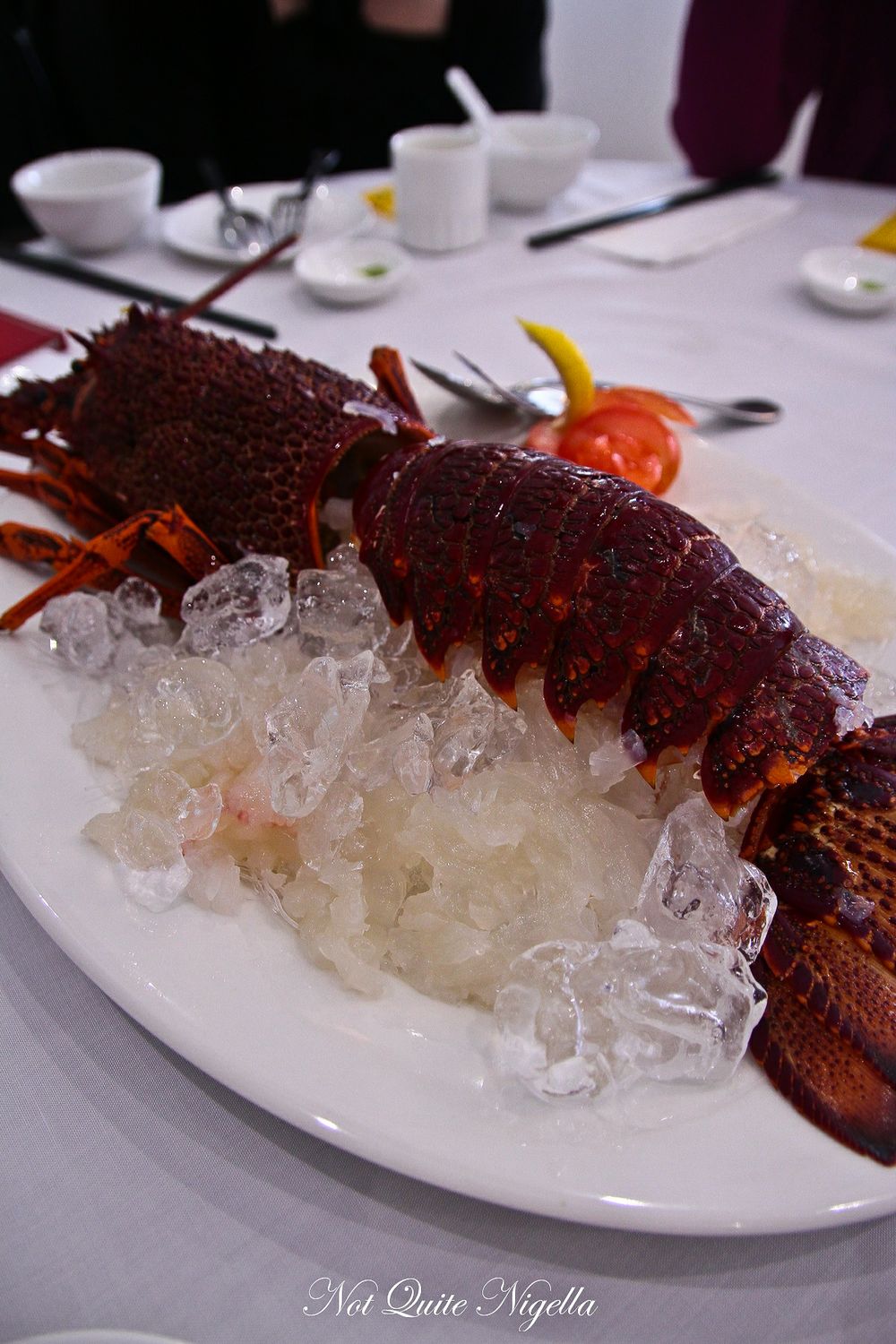 Now I know that this is daft but I didn't realise that they were going to bring out the top part of the lobster along with the sashimi. And one of the eyes and one of the legs was moving which I found creepy. Admittedly the lobster wasn't alive, nor looking at me with pleading eyes as I thought it was, but it was the nerve endings moving. The meat itself is quite different from other sashimi. With fibres along the meat, a bite has a bit resistance and wasn't as soft as other fish. It isn't served as smooth slices as with other fish, here it is served as long, patches of meat. Would I try it again? To be honest, I prefer cooked lobster and other sashimi like salmon, kingfish, tuna and scallop much more than lobster but I'm glad that we tried it. 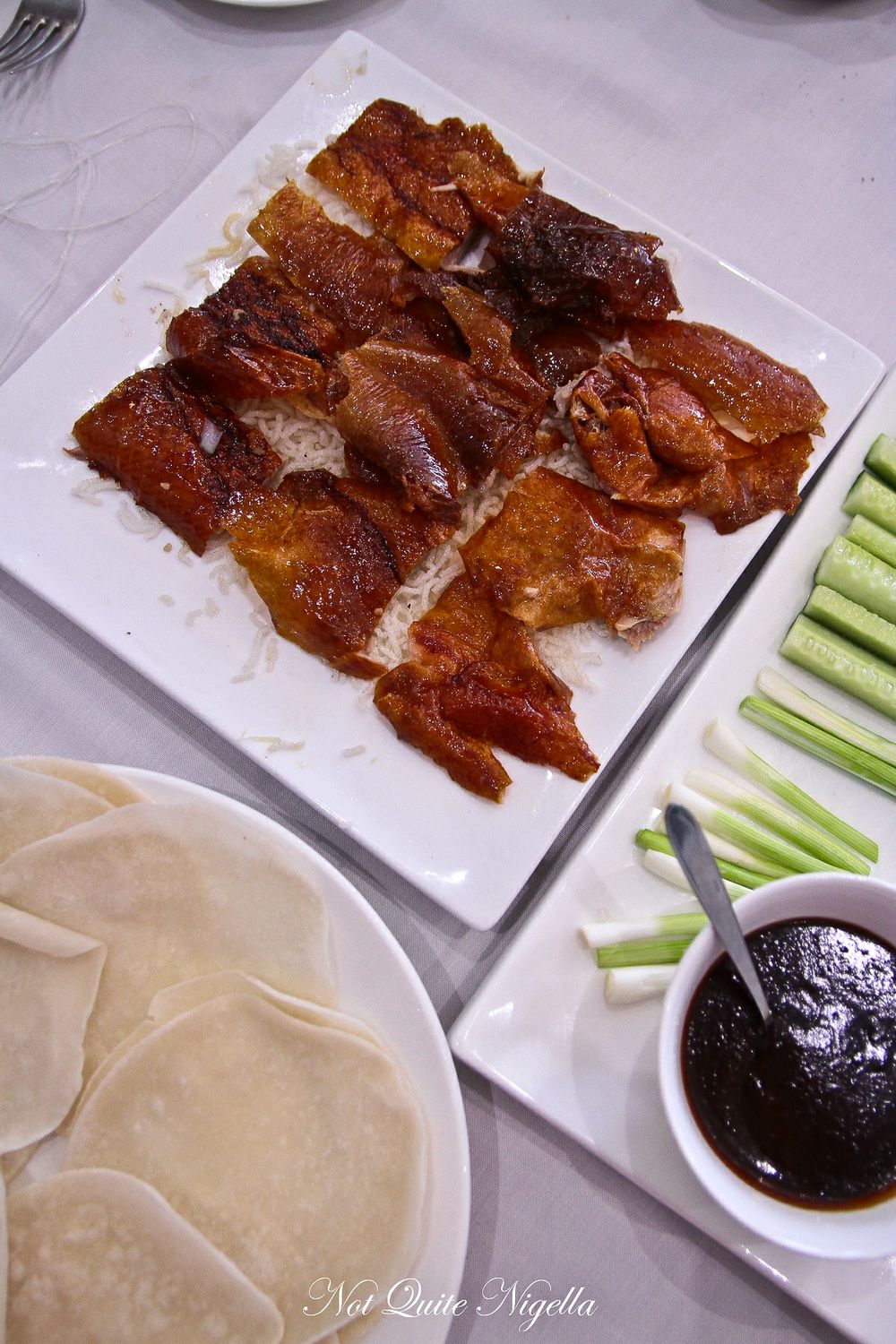 Our Peking Duck arrives and we assemble it all ourselves. The duck has quite a bit of meat attached to the skin whereas I prefer it with just the skin. We assemble the requisite pieces: the cucumber, spring onion and hoi sin sauce on the pancake and eat. 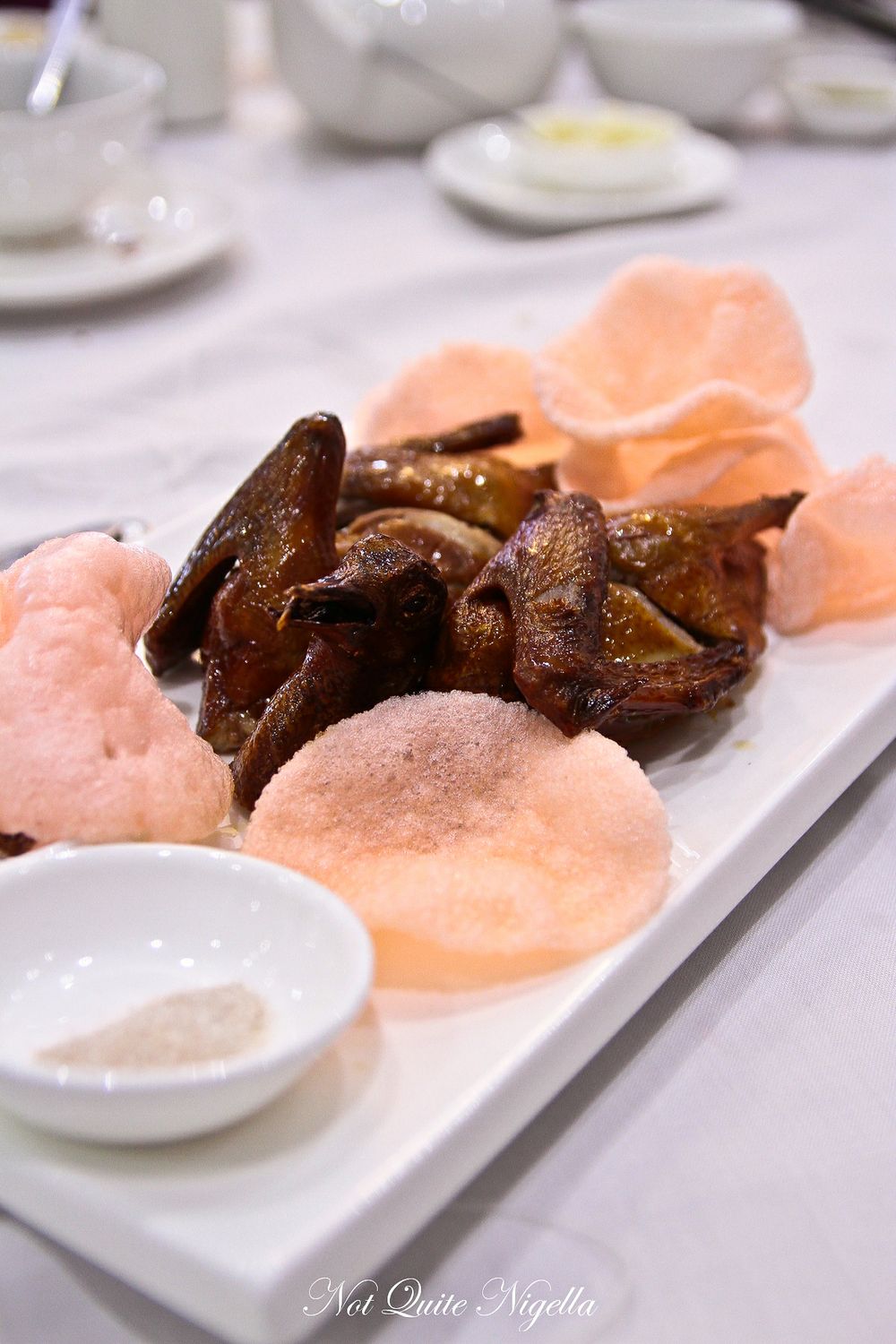 "Our meal is really...confronting tonight isn't it?" Mr NQN says as the pigeon is laid down on the table, its head facing us. The pigeon is a specialty of the house and it ends up being everyone's favourite of the night. The pigeon is crispy skinned, the small portions tender including the breast. There is a vinegar sauce and a salt and pepper dip, the latter giving it much flavour to the crispy skinned meat. 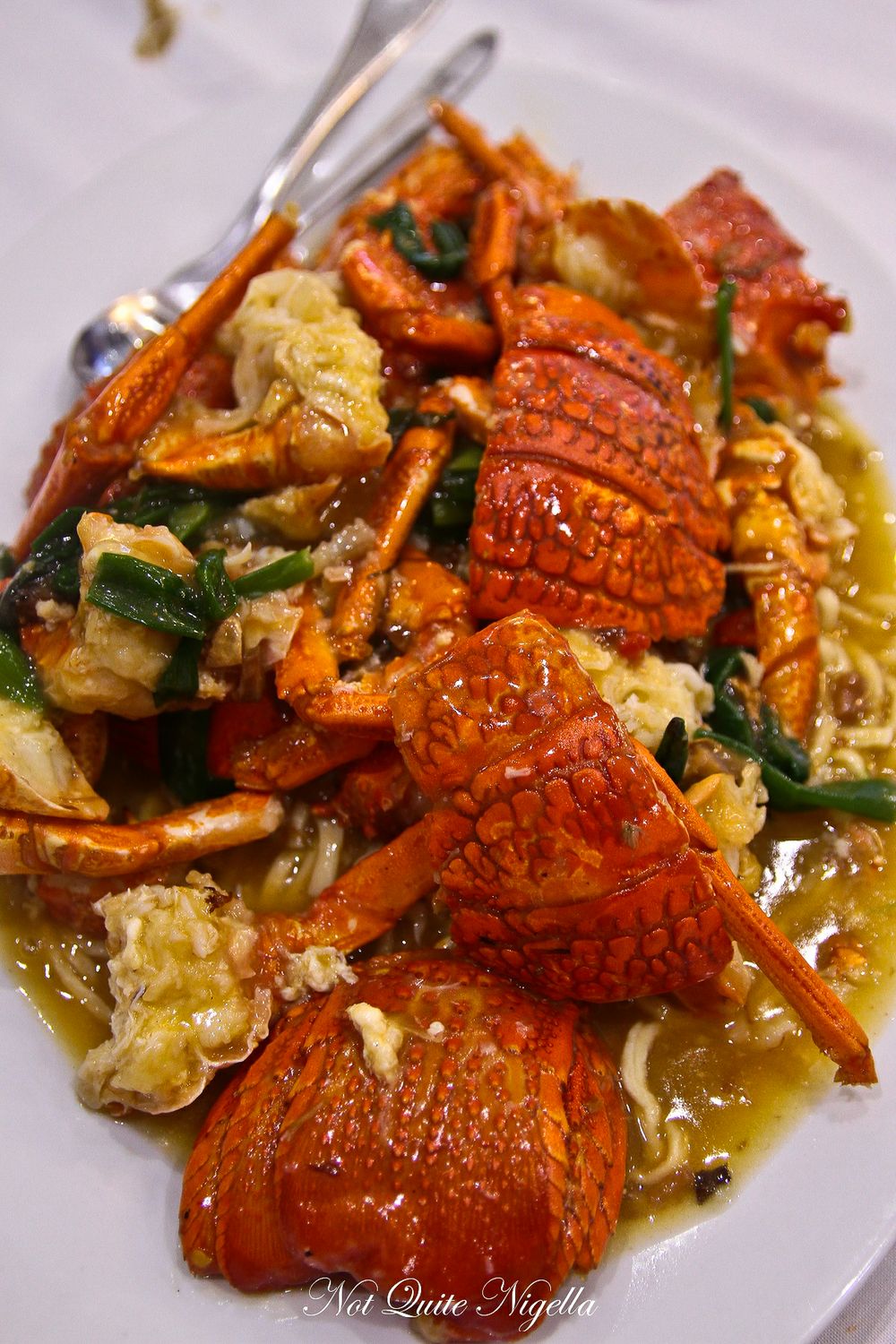 Time to get our fingers dirty! Remissly, we forgot to ask for a double serve of noodles as we usually do but we did request extra sauce. Said to be XO sauce, ginger and shallots, there wasn't much XO sauce taste unfortunately. The lobster was a tad dry but the noodles were springy. 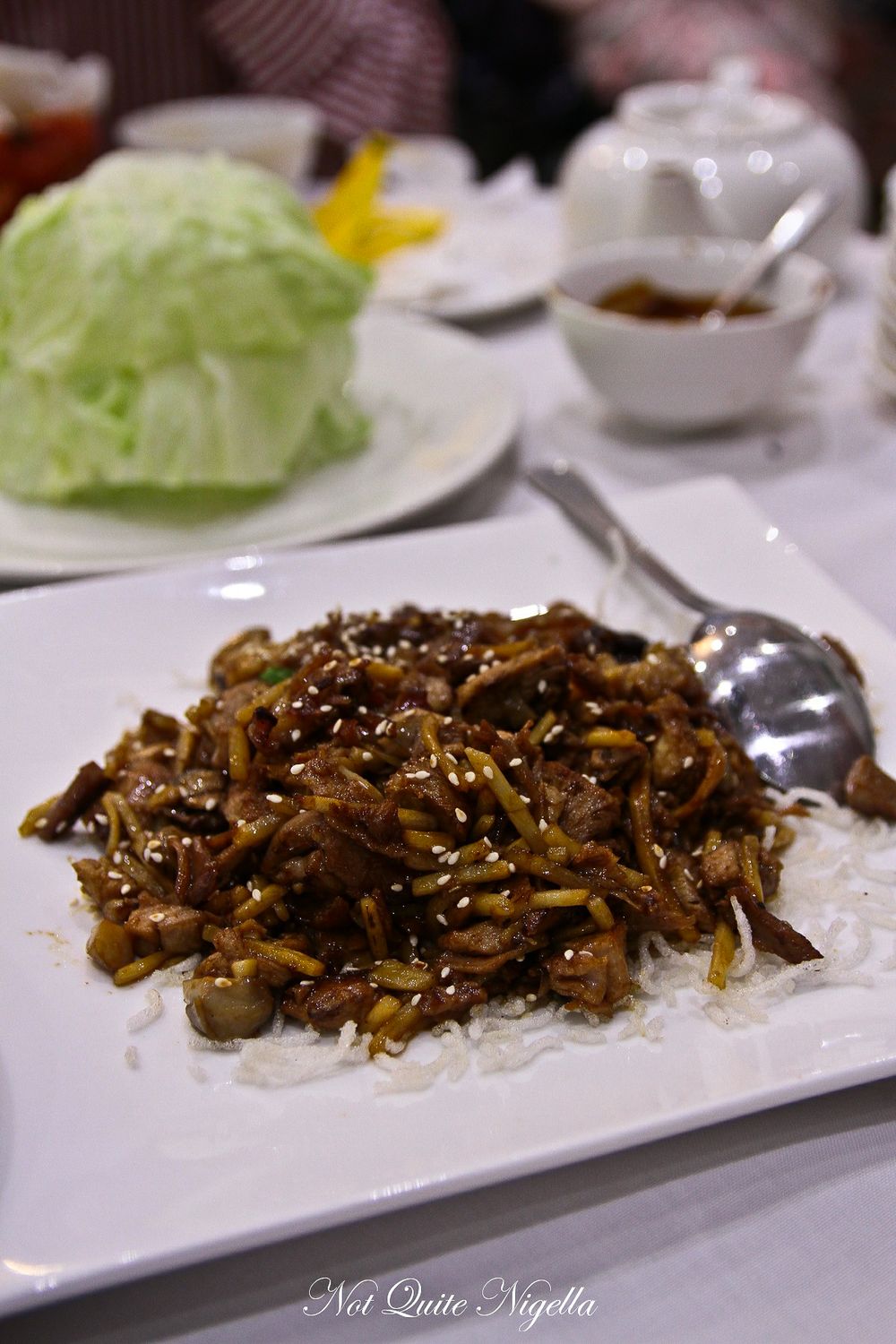 My favourite dish after the pigeon, the Peking Duck Sang Choi Bao is full of flavour and texture. 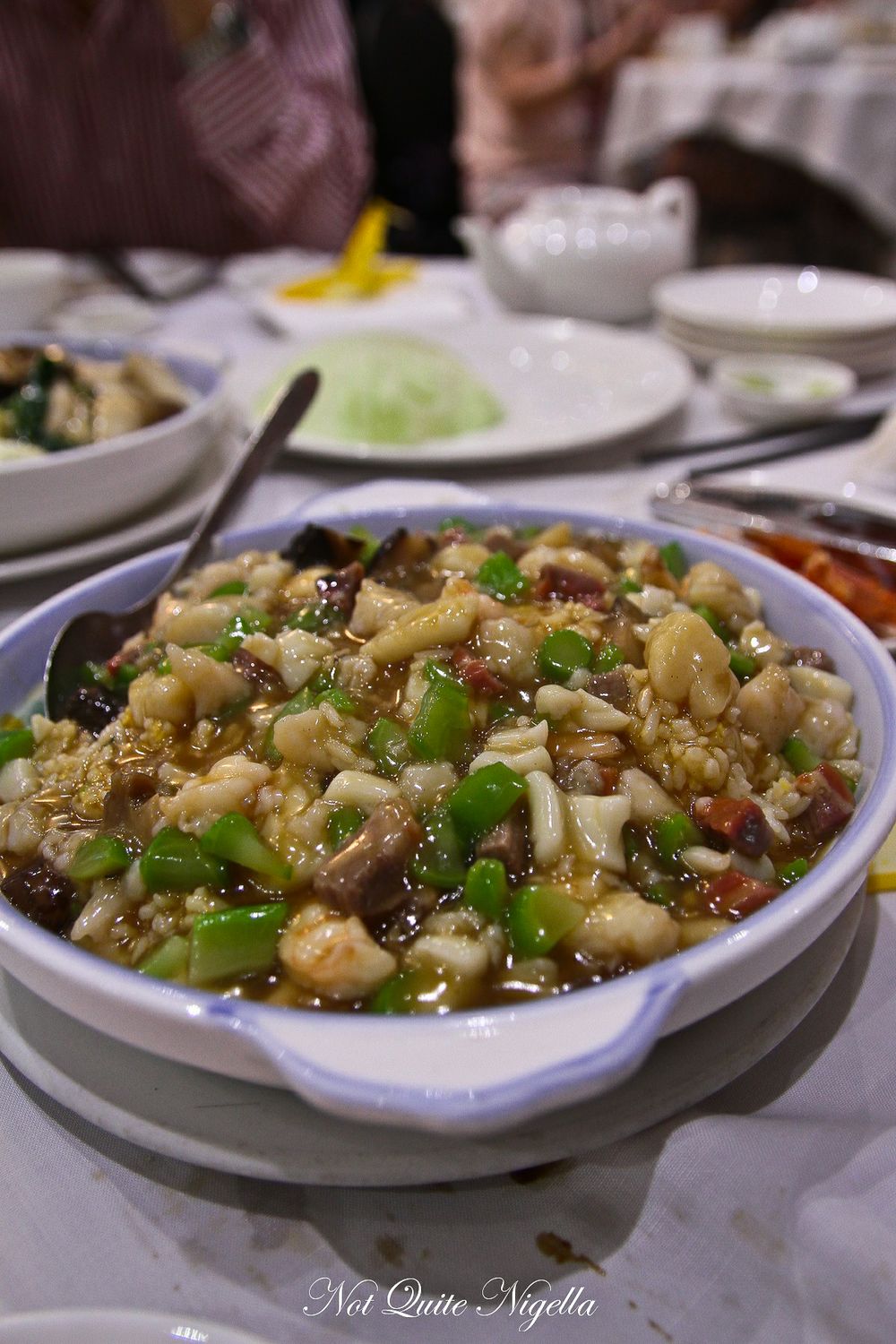 The last two dishes arrived much later than everything else even though we had requested the rice to come earlier. The Fukkien fried rice comes with a topping of prawns, char siu pork, squid, scallops, mushrooms and green and on top of this was a blanket of mild sauce that kept the rice moist. Alas, by this time we were quite full to really enjoy this. 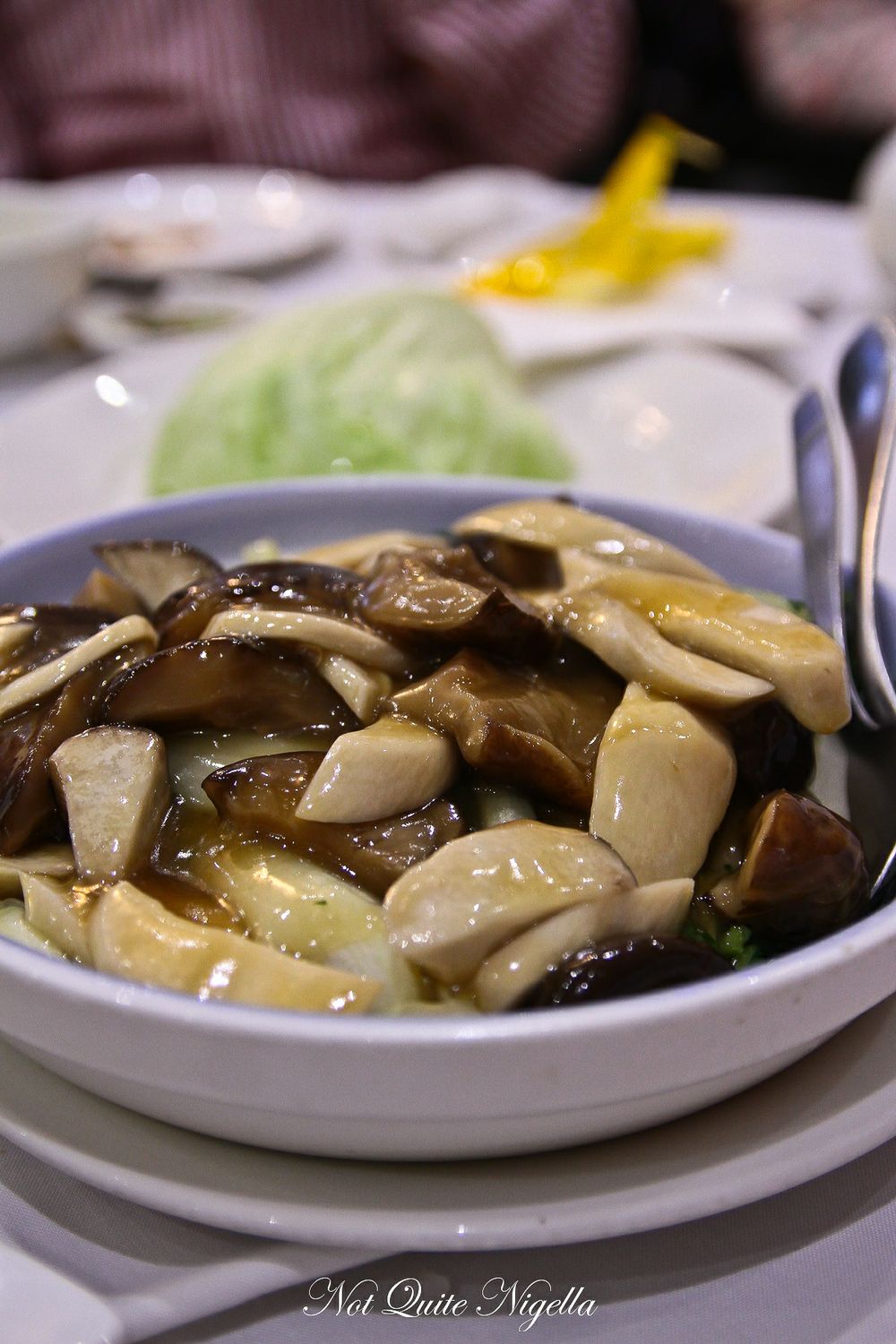 The mushrooms were shiitake and king oysters and they were mild in flavour, especially after the full flavoured sang choi bao. The sauce for this dish was very similar to the sauce that topped the Fukkien fried rice. 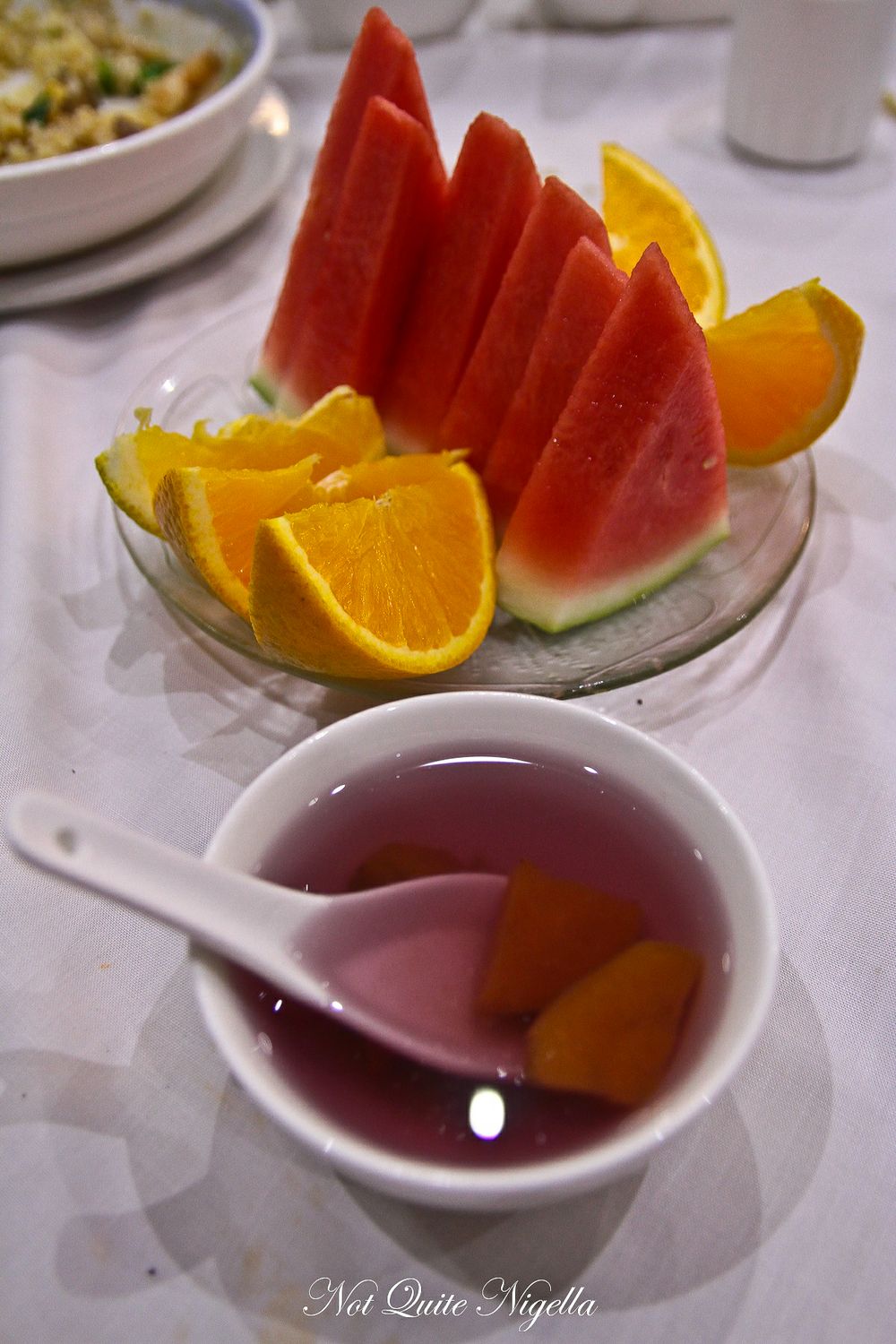 The menu has no dessert section and that's fine because they give out complimentary orange and watermelon as well as a sweet soup with ginger and sweet potato in it.

So tell me Dear Reader, will you be celebrating Chinese New Year? And do you know your Chinese astrological sign?