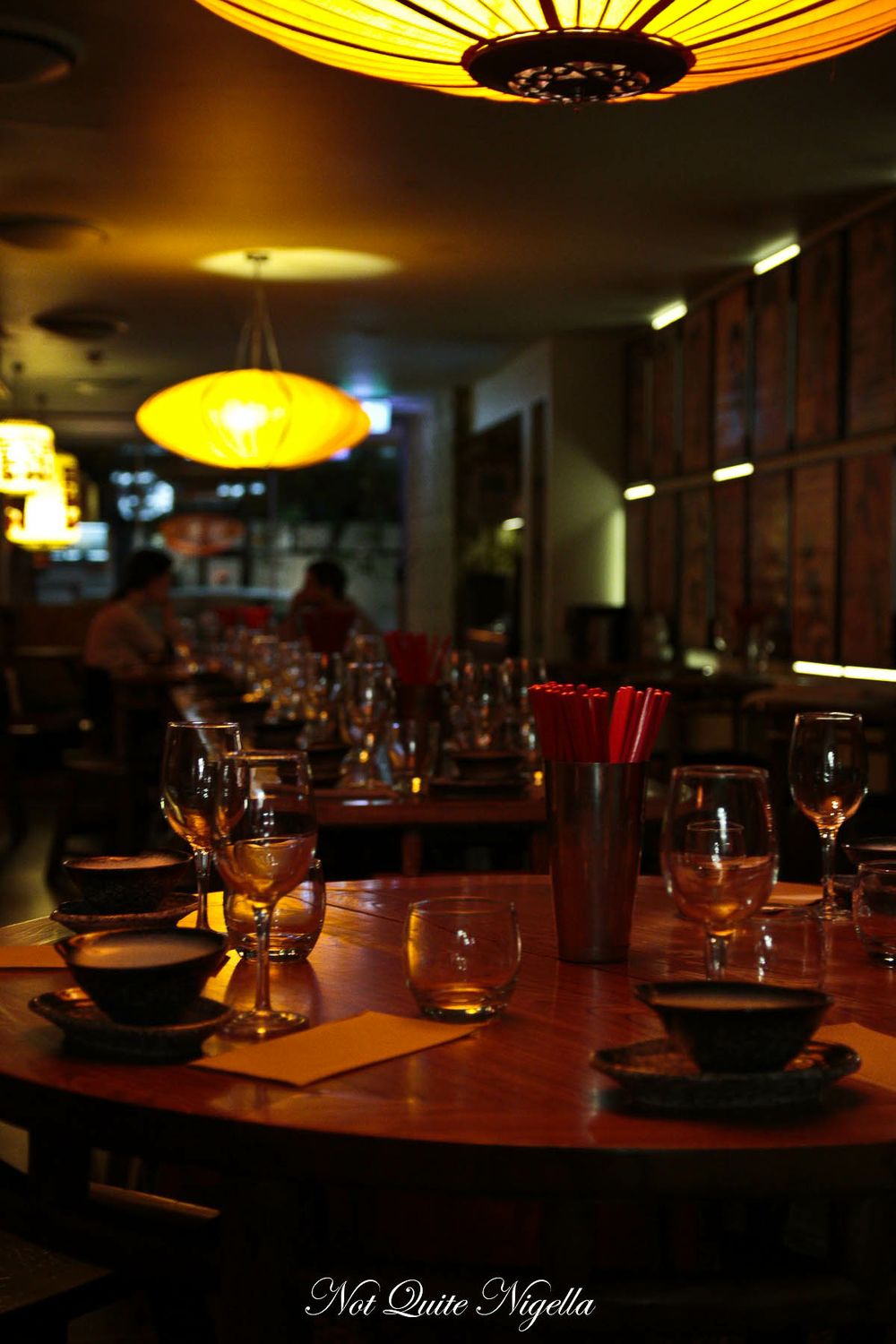 Our record for a family dinners out at a restaurant is thirty five minutes because when my parents and I tend to eat out, we eat at such an early hour and it's usually Chinese cuisine. These are two things that can often mean that a meal isn't dragged out for hours and we arrive back home just in time for my father to retire as per his normal custom at 8.30pm. He's happy and we get an early night in which is a serendipitous surprise. This evening, Mr NQN drops my parents and I outside Fu Manchu and goes off in search for one of the more elusive things in Darlinghurst: a parking spot for more than one hour. 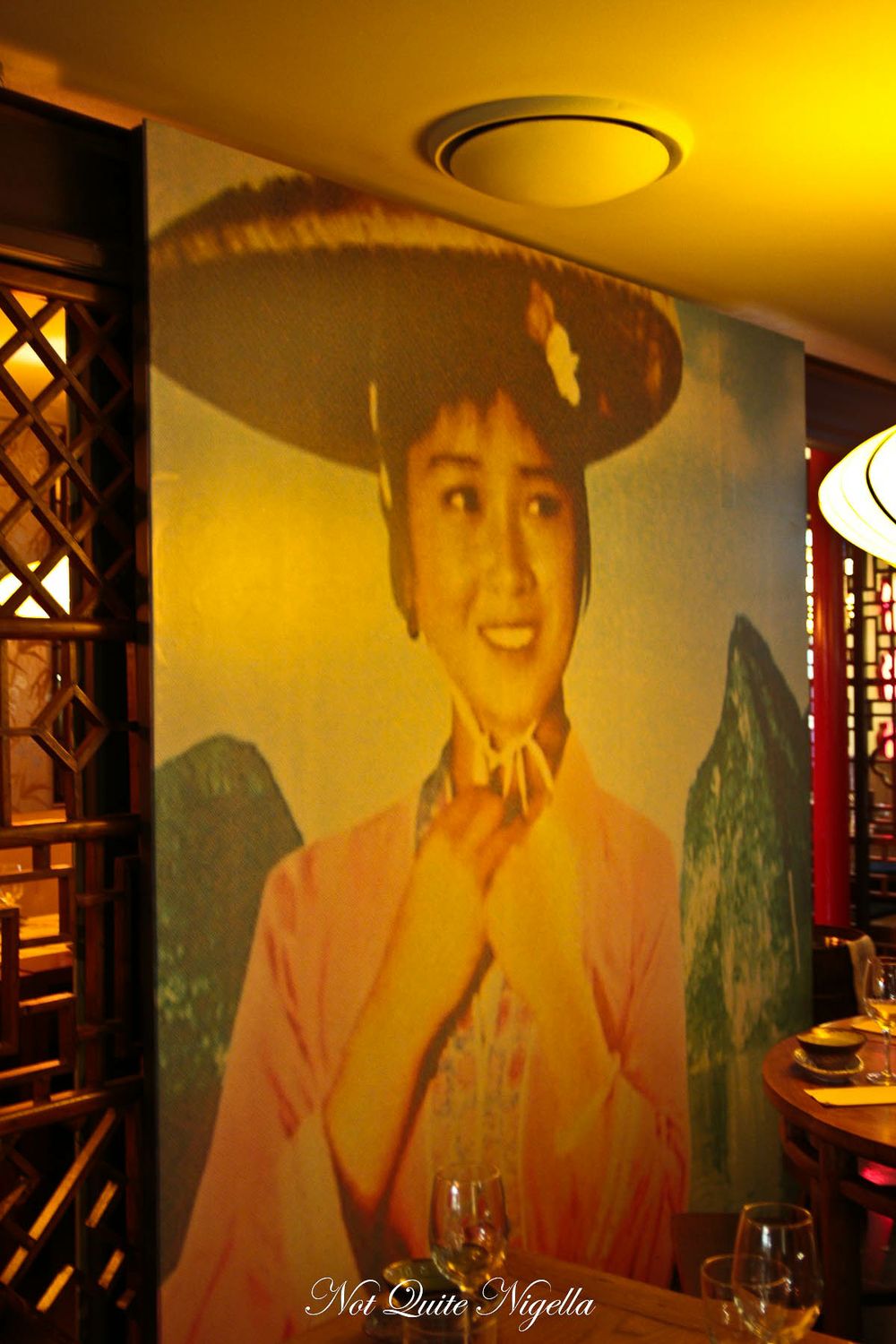 We sit down in Fu Manchu, the restaurant that recently moved from Victoria Street to the parallel Darlinghurst Road next to the Kirketon Hotel. We are told that the decor  is all from the owner's buying trip in China and includes paintings, lights, chairs and cushions and even the gorgeous bowls and cups which we all instantly covet. As we're dining so early, the restaurant has about five other tables occupied  in this long space and the kitchen is situated at the end with the chefs visible through a glass partition, their camaraderie lightly audible. Our waitress is lovely and helpful with her suggestions although we're handed just a regular a la carte menu. There is a separate banquet menu and a menu for vegetarians and a gluten free one although we weren't offered these. 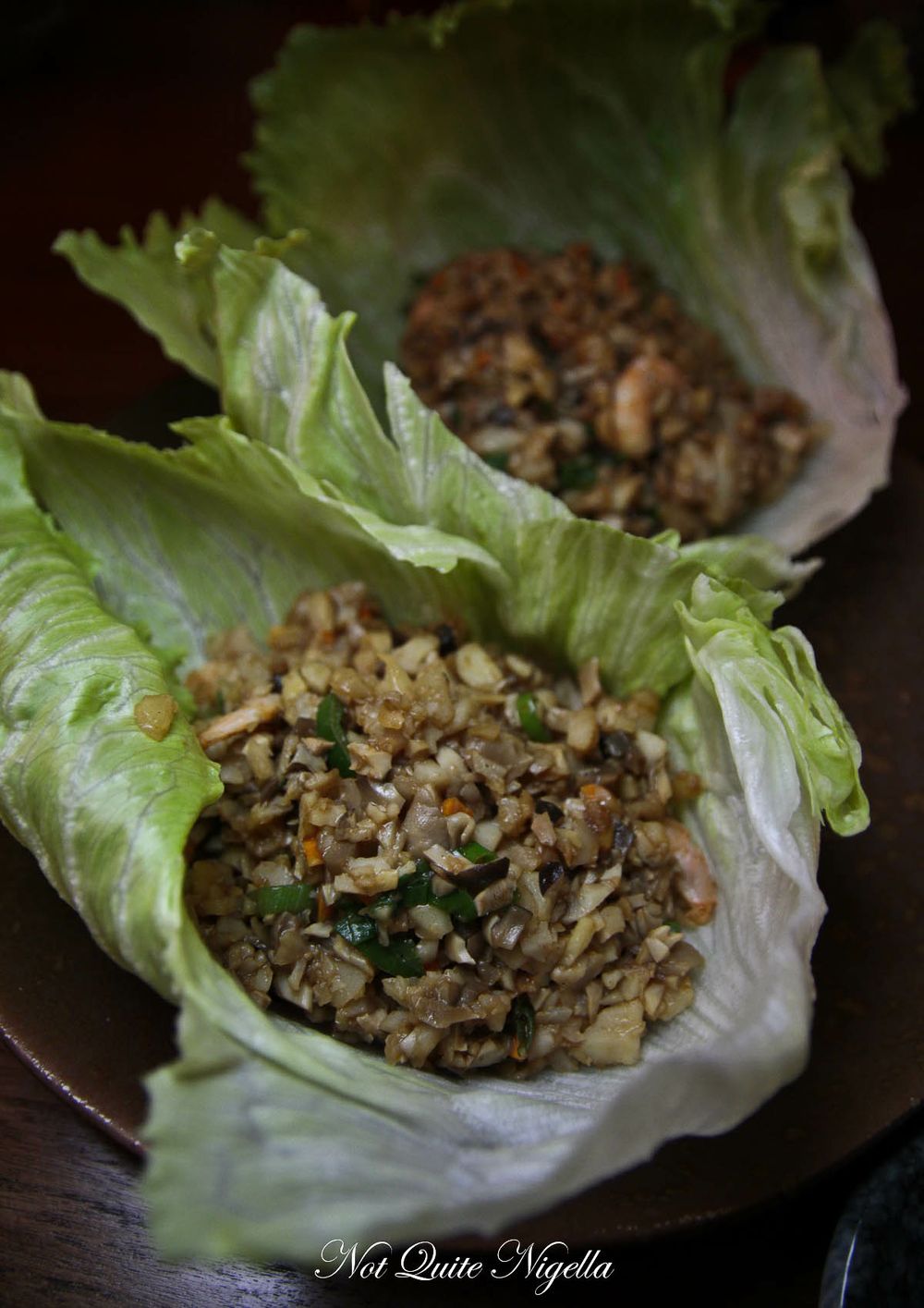 The food arrives quickly and the prawn sang choi bau arrives in less than five minutes after we ordered it. There's the occasional small prawn but it's mostly a mixture of vegetables with a lot of crunchy water chestnut. It's actually really very tasty indeed but if you're looking for a prawn laden dish, this isn't really it. 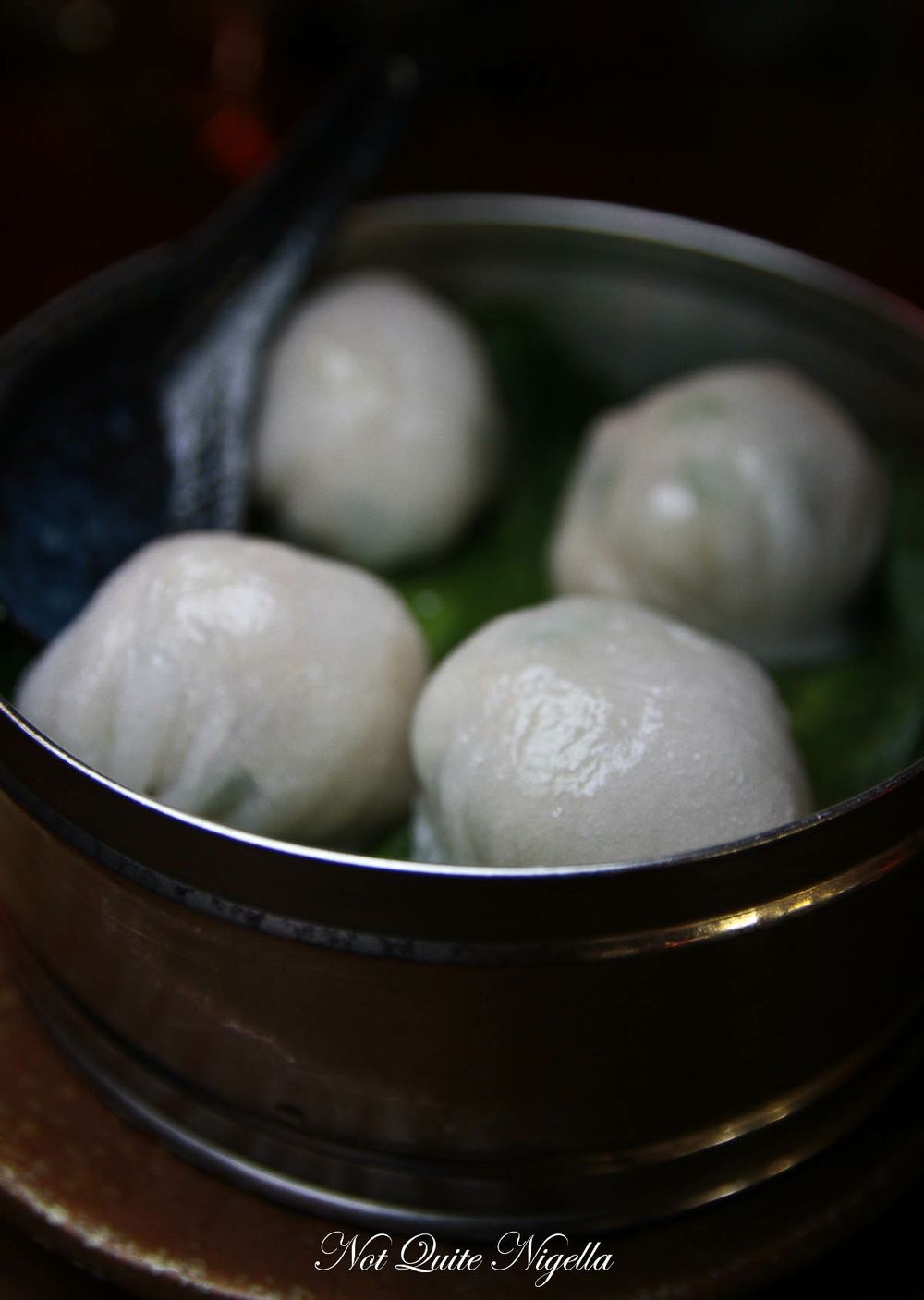 There were two types of gow gees, prawn & scallop or pumpkin on the regular menu and our waitress let us know that the prawn  and the seasonal  menu lobster dumplings are extremely popular and both sell out by 8:30pm every night. We would have gone for the lobster ones but they were two for $10 and she urged us towards these more as they came in a serve for four. They're slightly different from the thin skinned dumplings filled with prawn that you get at yum cha. Here the dumpling skin was stickier which I loved and the filling was tender chopped prawns and scallops, white pepper and ginger which went perfectly with a tiny dash of soy sauce and a deep dunk in the chilli oil provided. If I had these at yum cha, I would have stopped the trolley for more. 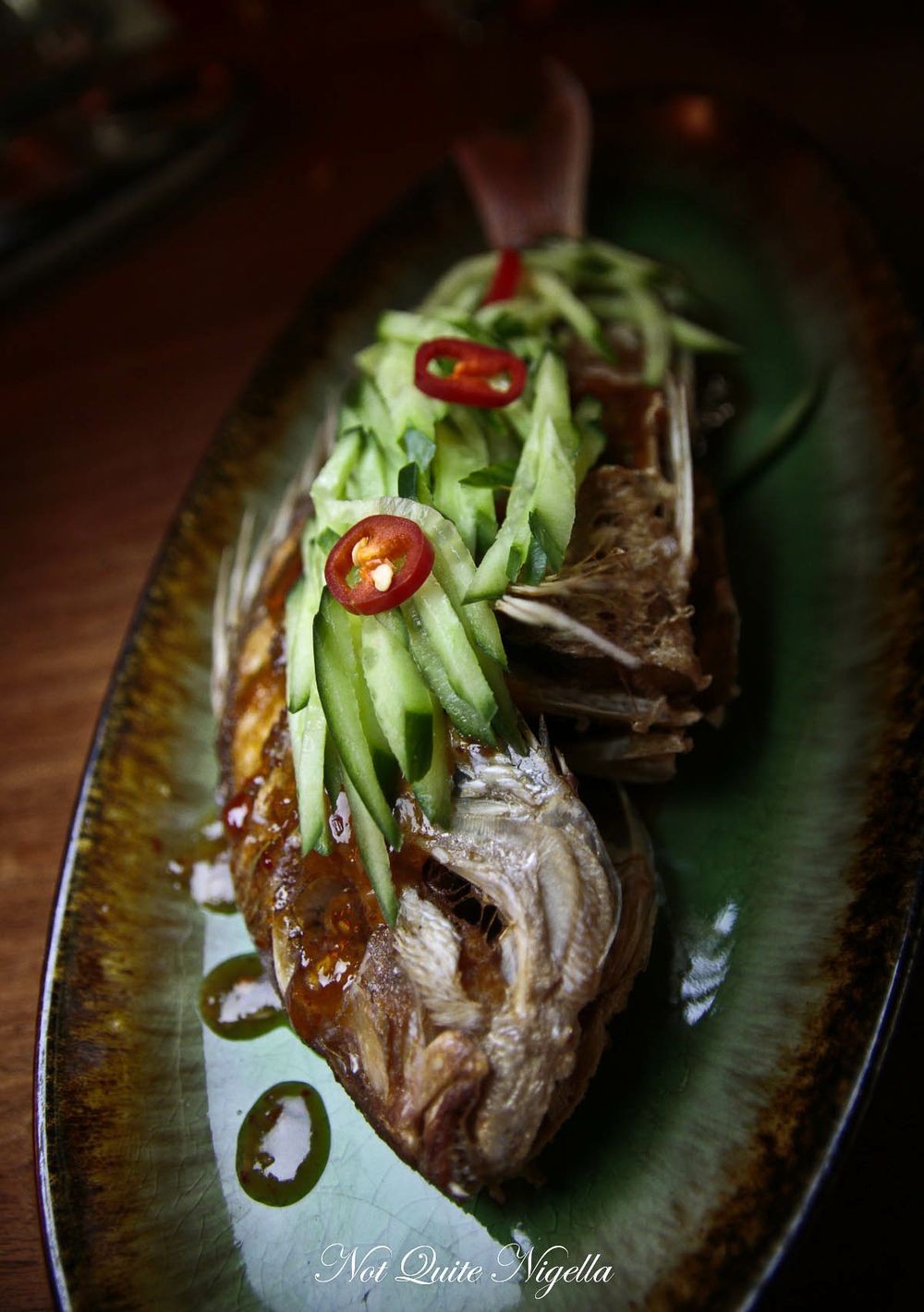 Sometimes places take apart the fish for you but here they lay it down with a fork, knife and a spoon and you do it yourself. The snapper was a smallish one but beautifully presented with cucumber and chilli on top. It is deep fried until very crispy and comes with a sweet rock sugar dressing which was like a sweet and sour sauce-just a bit more of the sauce would have been better. 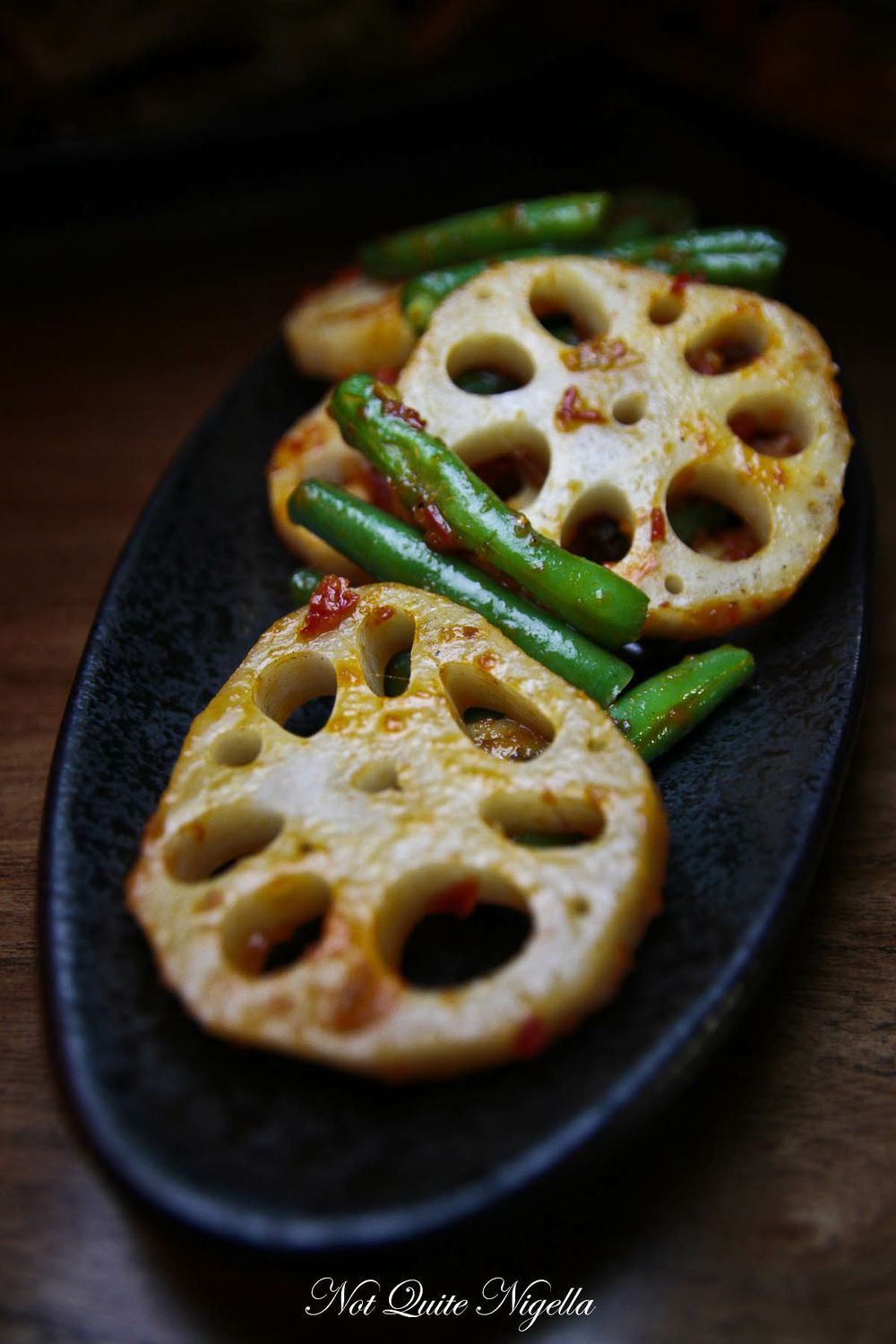 It may sound odd that a lotus and green bean sambal is one of my favourite dishes. I only say that because it was mainly ordered to get our vegetable quotient in but the sambal is spicy and full of flavour from the small dried anchovies and I could spoon it on everything if I had a jar. This was one of the waitress's recommendations and both vegetables were perfectly cooked and the sauce plate lick worthy. The only gripe? It was a small dish (like most of them here). 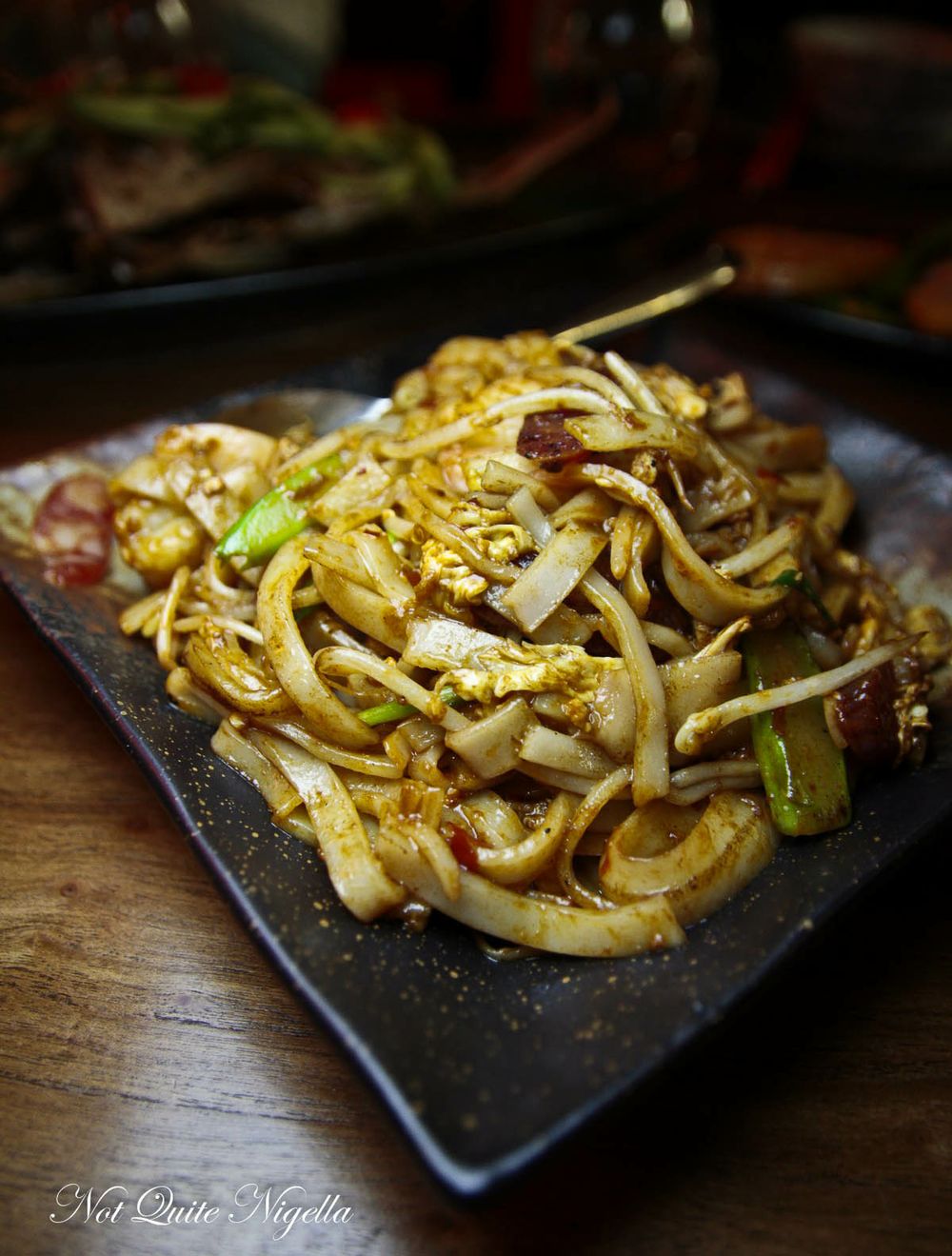 We were told that the chef was Malaysian so that's why items like Char Kway Teow and other pan Asian ones pop up on the menu. The Char Kway Teow is lighler in colour than how we usually have it. There isn't much of the caramelised breath of the wok on the noodles but it isn't a bad dish although again, it is quite a small one. 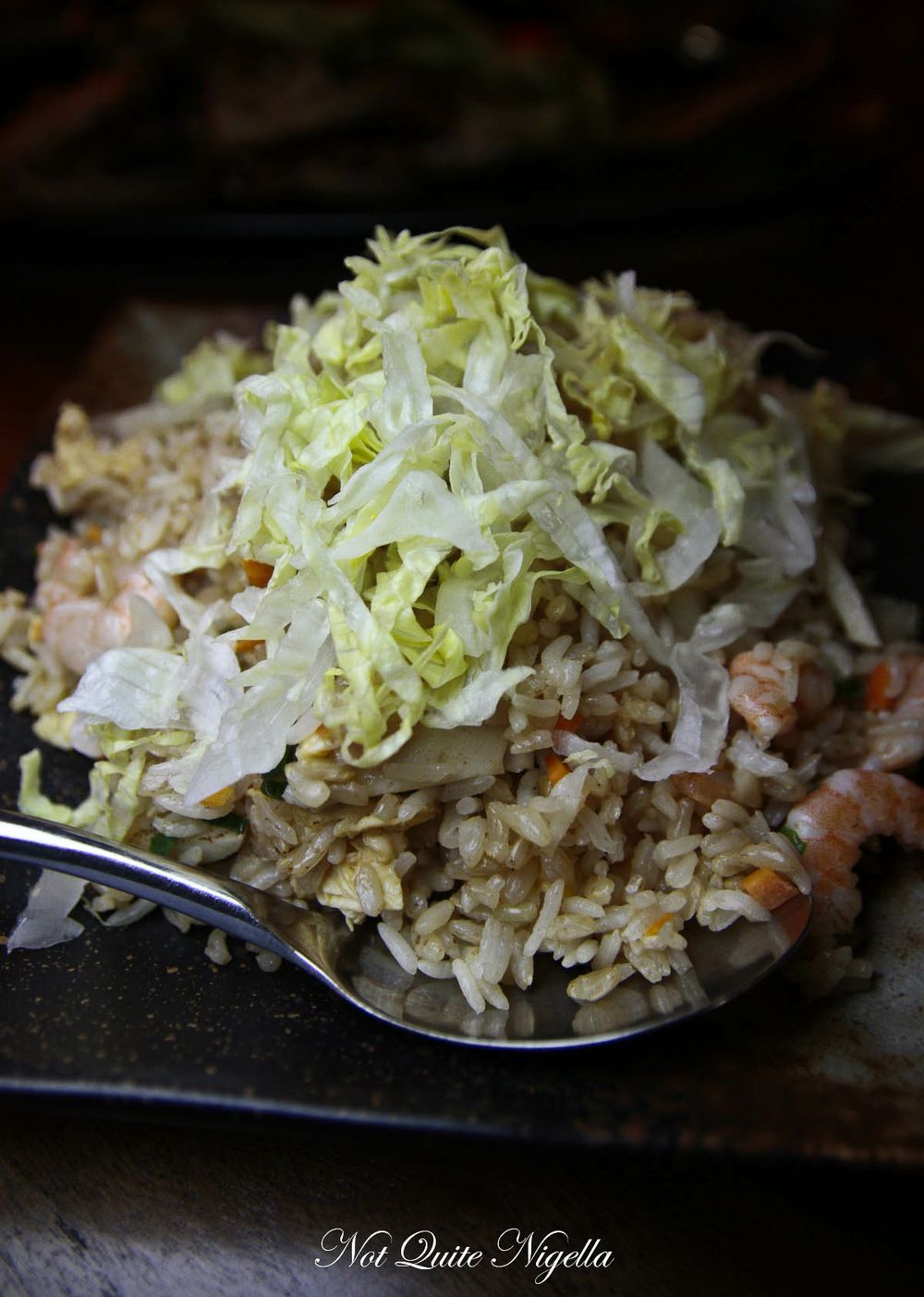 We opted for brown fried rice instead of white and it's a good fried rice topped with shredded lettuce. In it are rice, prawns, scallops, vegetables and egg. 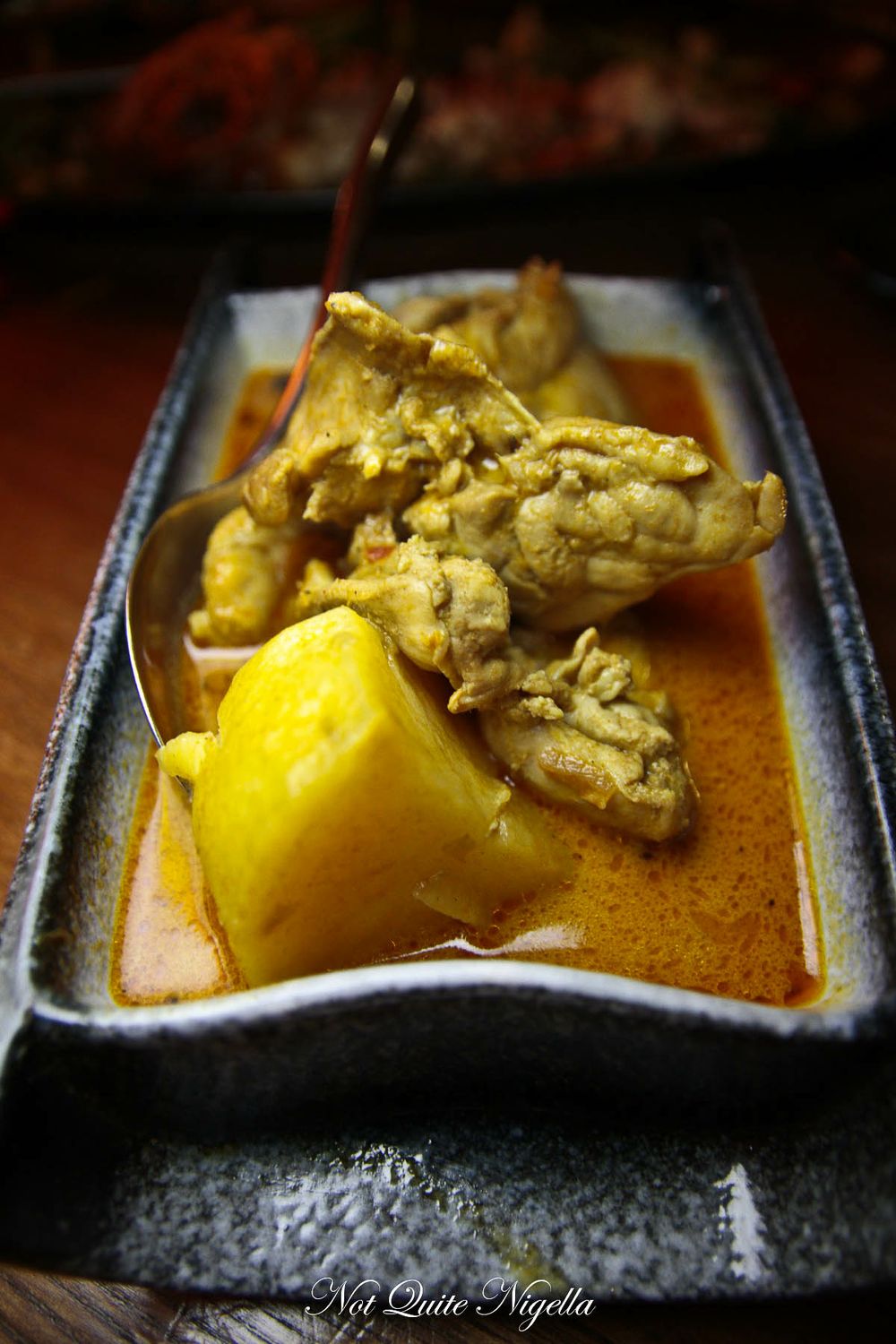 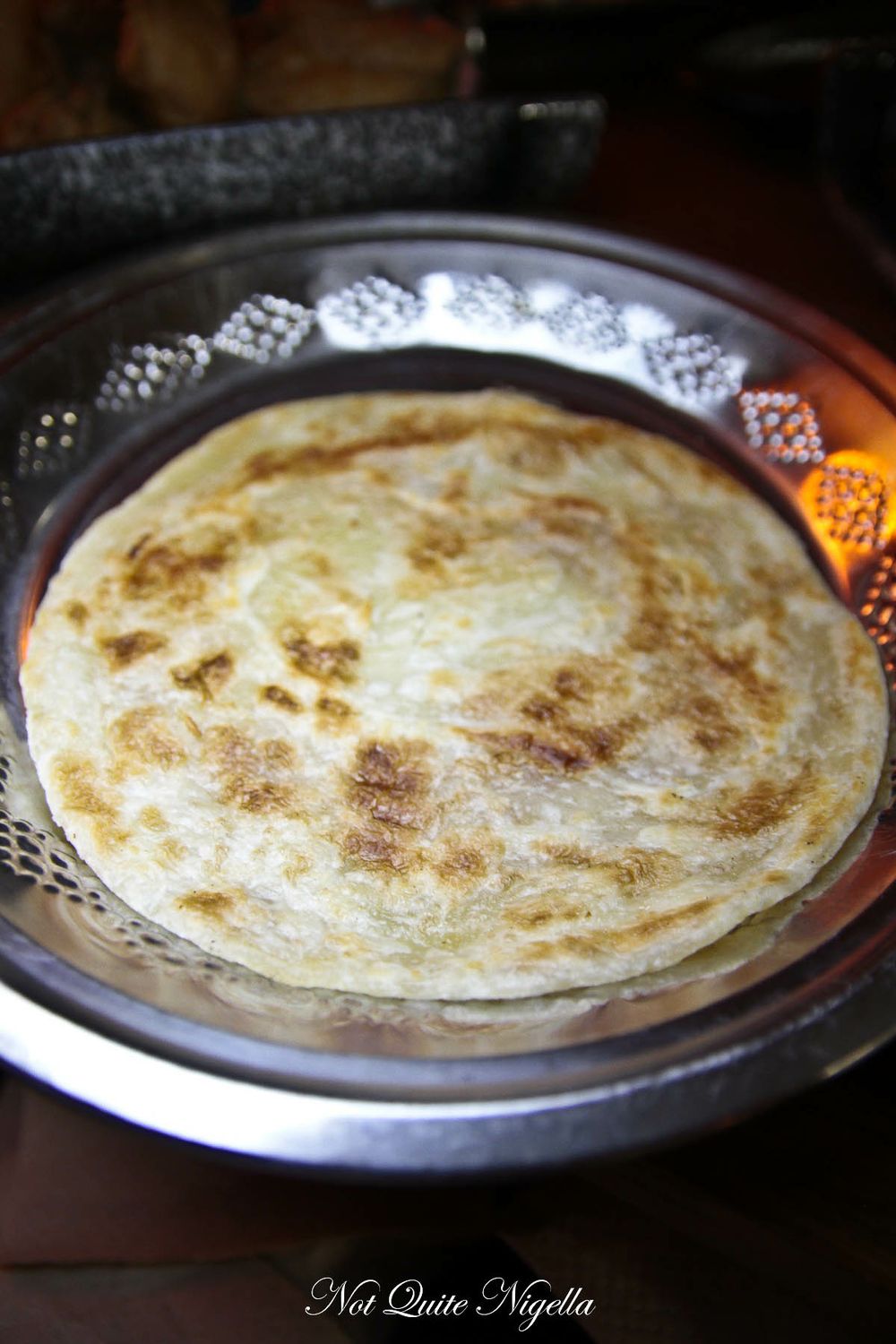 Our two curries came last and the first one was the nyonya chicken potato curry which had four large pieces of boneless thigh fillet and a fragrant curry sauce and is another of the table's favourite dishes. It came with one single roti, I think perhaps two might be a bit more generous when sharing or perhaps they're meant as serves for one but the single roti seemed a bit lonely on the plate. 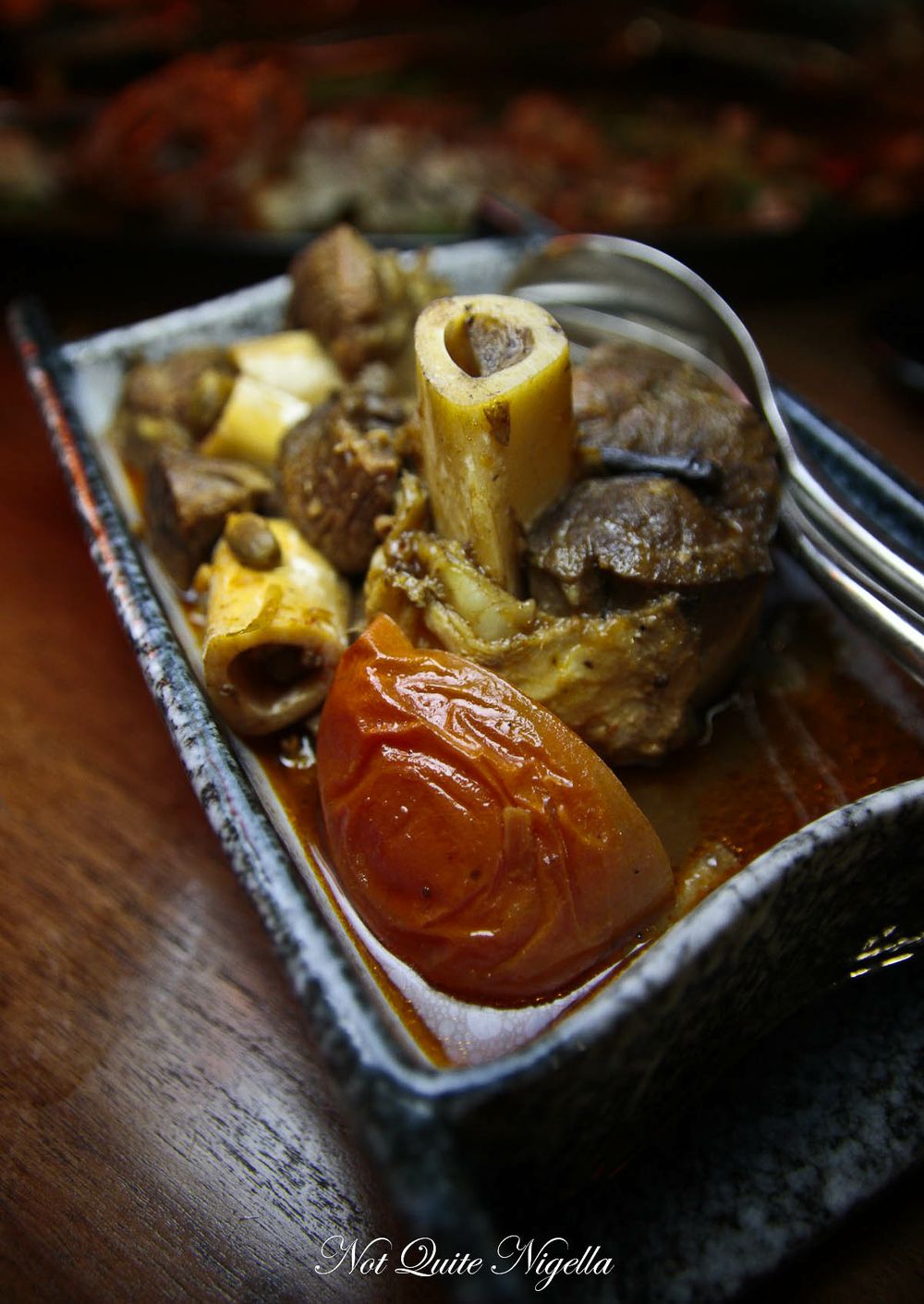 In comparison the Malay Indian lamb shank curry isn't bad but it doesn't have the spectrum of flavours that the Nyonya curry had. This one predominantly tastes of star anise and it has a thin sauce with it. The lamb is soft and falls off the bone but compared to the full flavour chicken curry, it's a bit of a second place runner up. 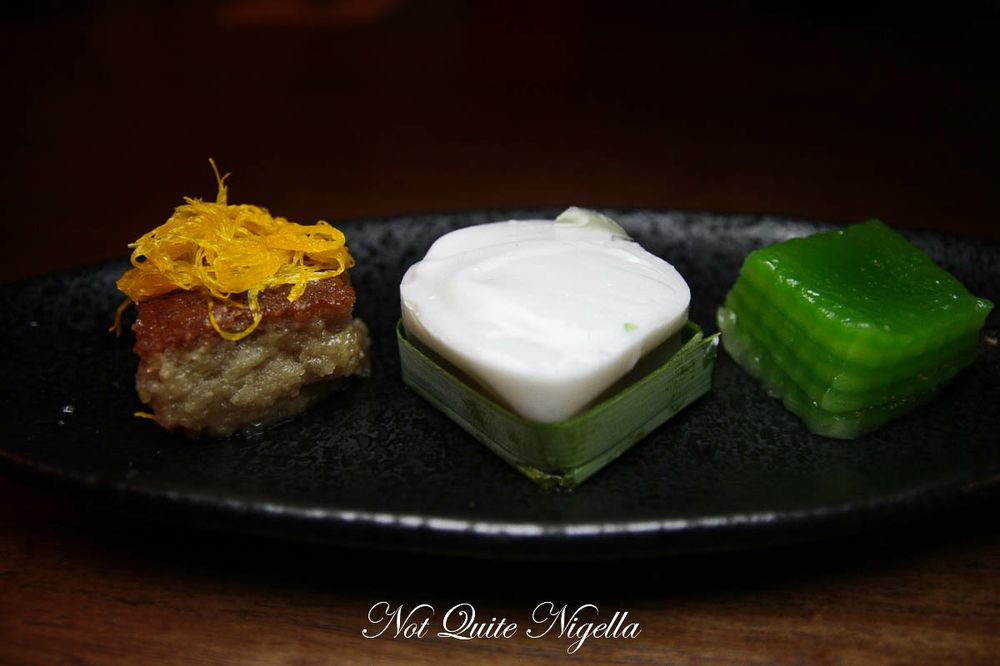 There's just one dessert on the menu and it's a three parter consisting of a warm steamed taro cake, a water chestnut and coconut cake served cold and a warm pandan agar layer cake. The last two were divine with the water chestnut and coconut having a crunchy, sweet base underneath the creamy coconut and the pandan agar layer cake so interesting with it's slightly stretchy, warm jelly texture. The taro cake wasn't bad and it was an intense sweet hit.

We look at the time and it's just under an hour although we didn't feel rushed or anything. I see my dad's face light up with a sigh of relief as he checks his watch and he'll make his bed time curfew.

So tell me Dear Reader, when you go out on a Friday or Saturday night, how late do you stay out? And how often do you dine out with your parents? 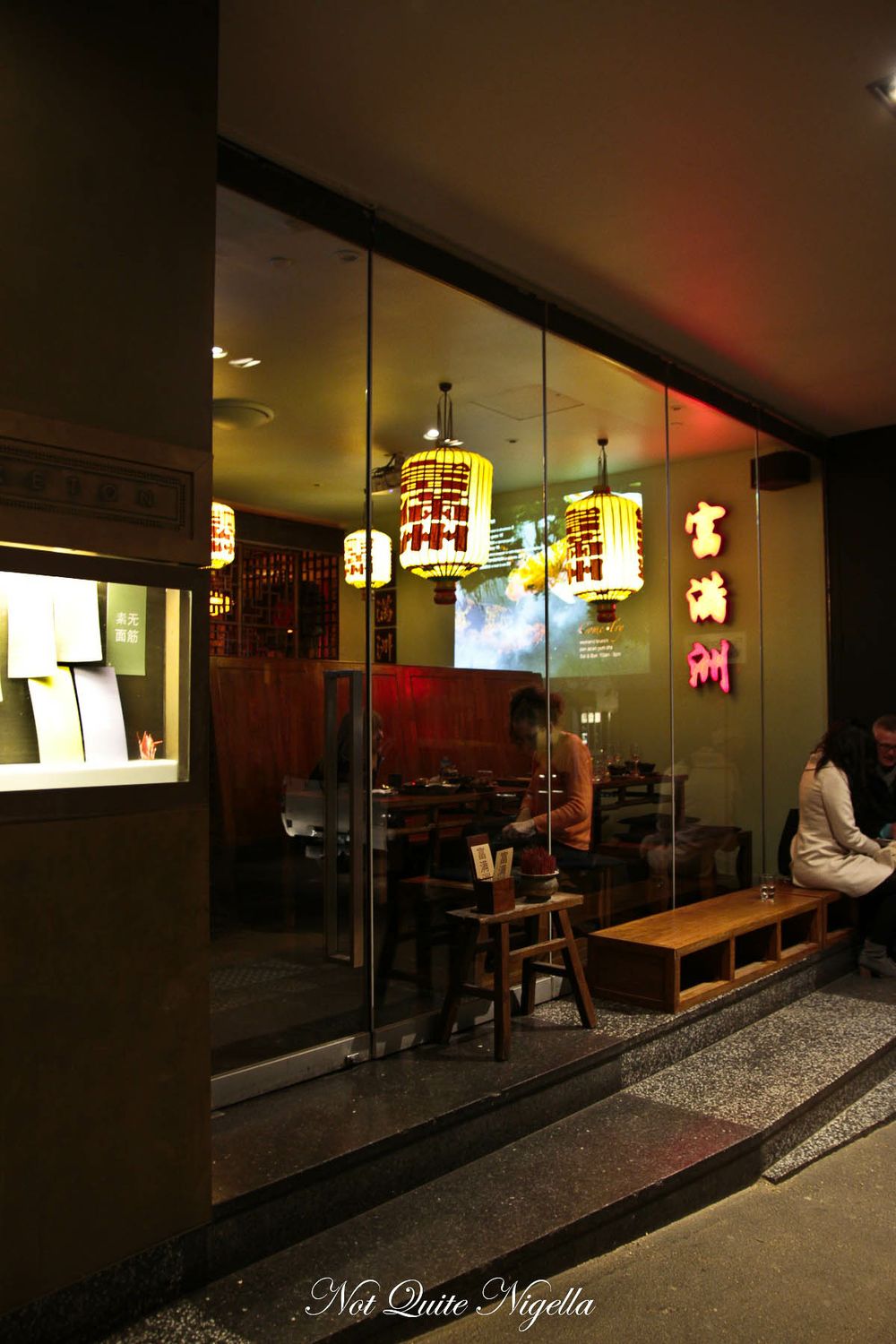 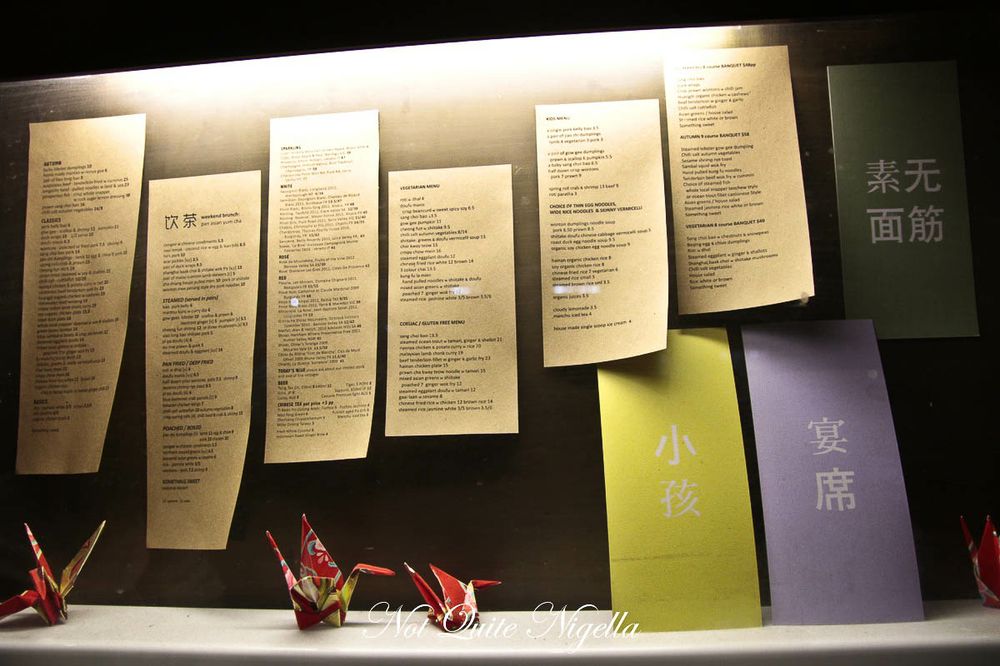