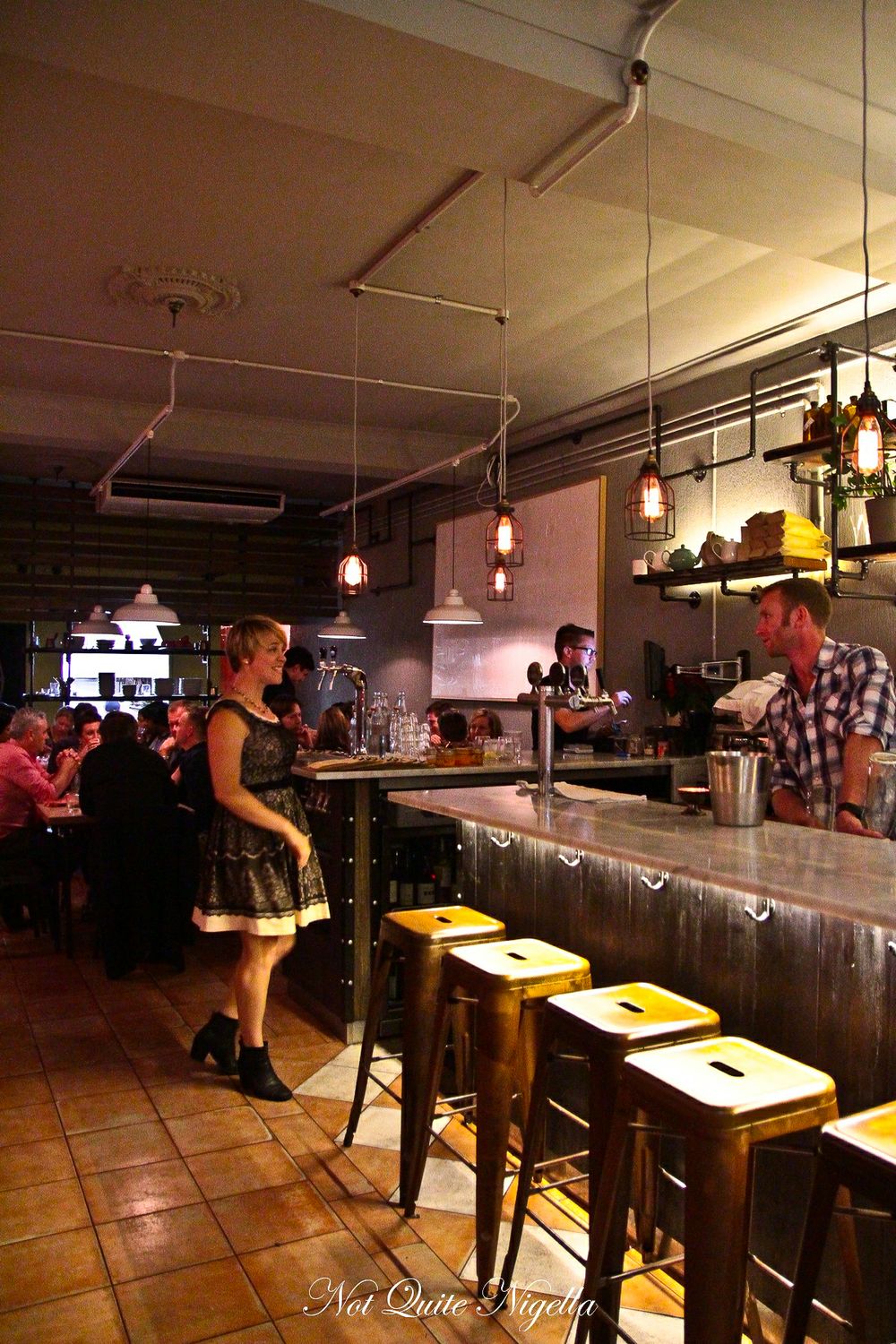 I have a list. It's frequently updated and broken up into five sections: City, East, North, South and West. It's my "to eat" list and I consult it on a regular basis when friends ask me where we are going to eat. Hartsyard has sat on that list ever since it opened. 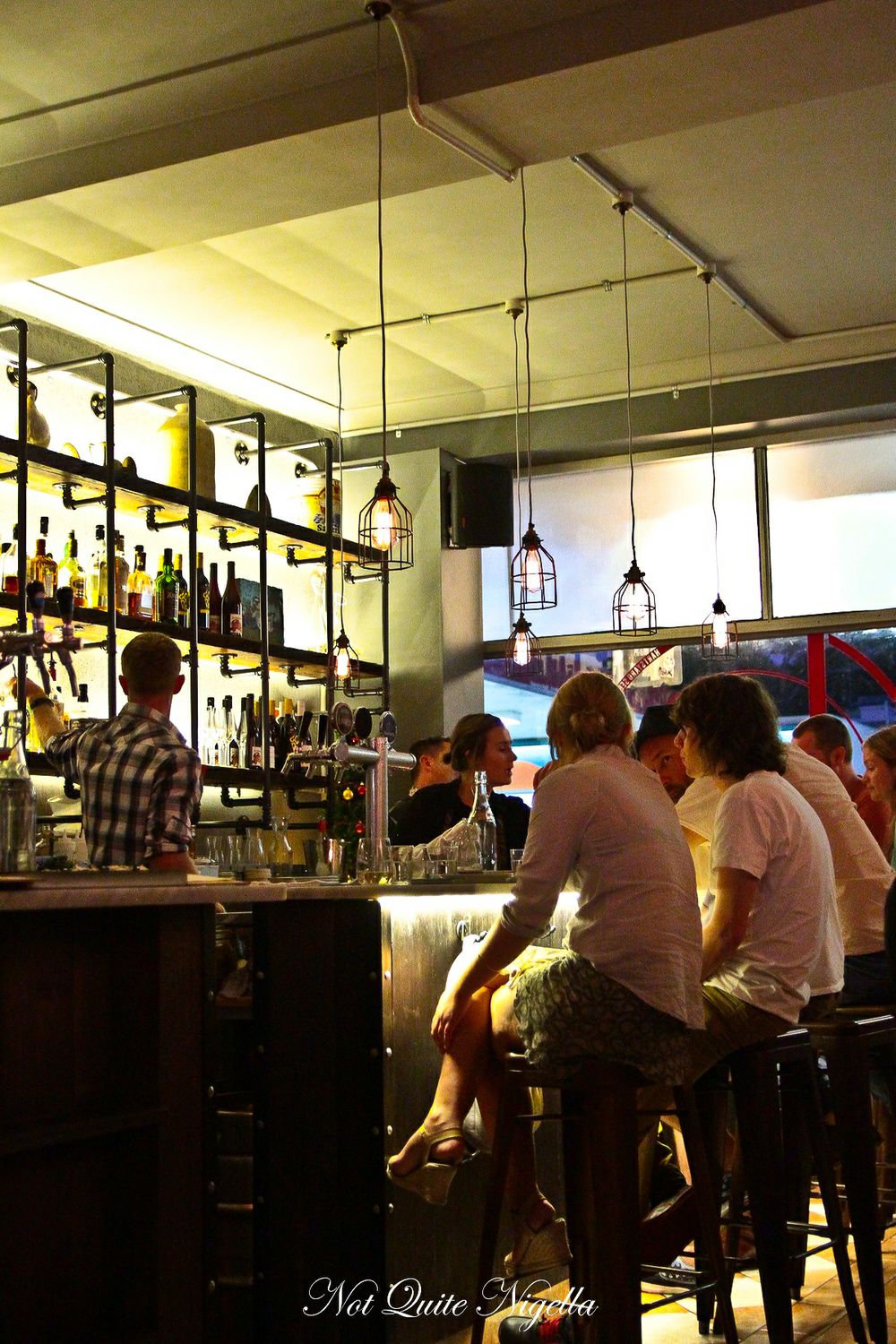 Hartsyard sits on Enmore Road, slightly away from the madness of King Street but that seems to matter not one jot as it has been buzzing since it opened. There is a front bar area and the restaurant itself has painted pipes, topographical maps of the Mid West of America graduating from most densely crowded to least. It's masculine enough but not overtly so. The service is knowledgeable and warm and they bring us our drinks menu. Craft beer enthusiast Mystery Guy goes for the honey beer while I go for the Pisco Punch because I love Pisco. American born chef Gregory Llewellyn and his Australian wife Naomi Hart are the duo behind Hartsyard. 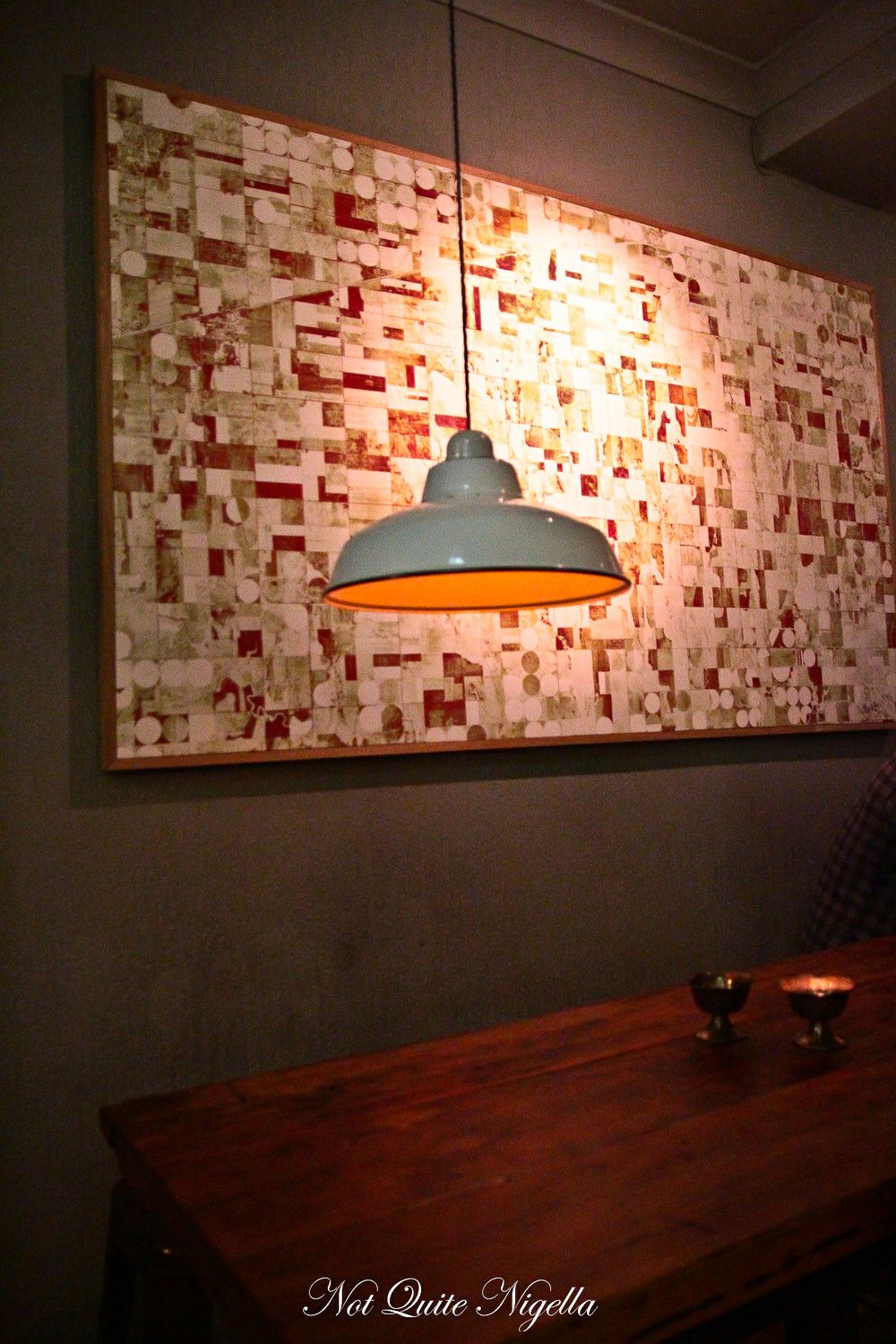 The menu shows that there is a sense of fun too with items like roulette peppers where one pepper out of the ten is hot. Our friendly waiter (called "Sparky Sparrow" on the bill) tells us that the menu is broken up into seed (the lighter meals) and feed (the heavier) and surprisingly, suggests starting with two seeds and one feed. A surprise as it sounds restrained and usually one is encouraged to order a lot. However after discussion and because we were unable to decide, we opted for two seeds and two feeds. Prices are reasonable with no main over $31. A nice touch is the price of $4 per person for unlimited Hartsyard sparkling or still water. 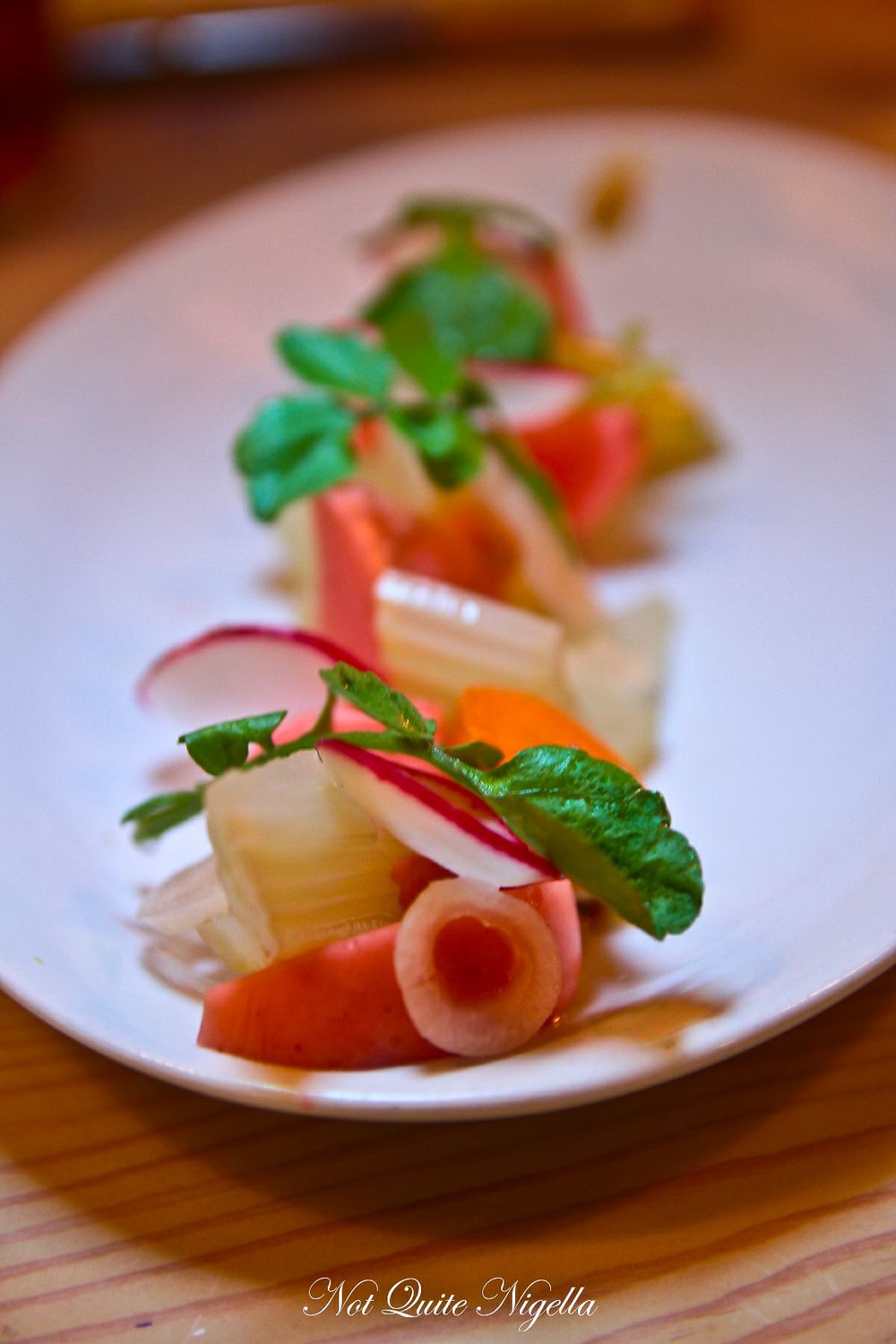 A plate of pickles comes out first and they've got a nice burst of salty pickling flavour to them and the celery is a favourite amongst the carrot, onion and paper thin slices radish. 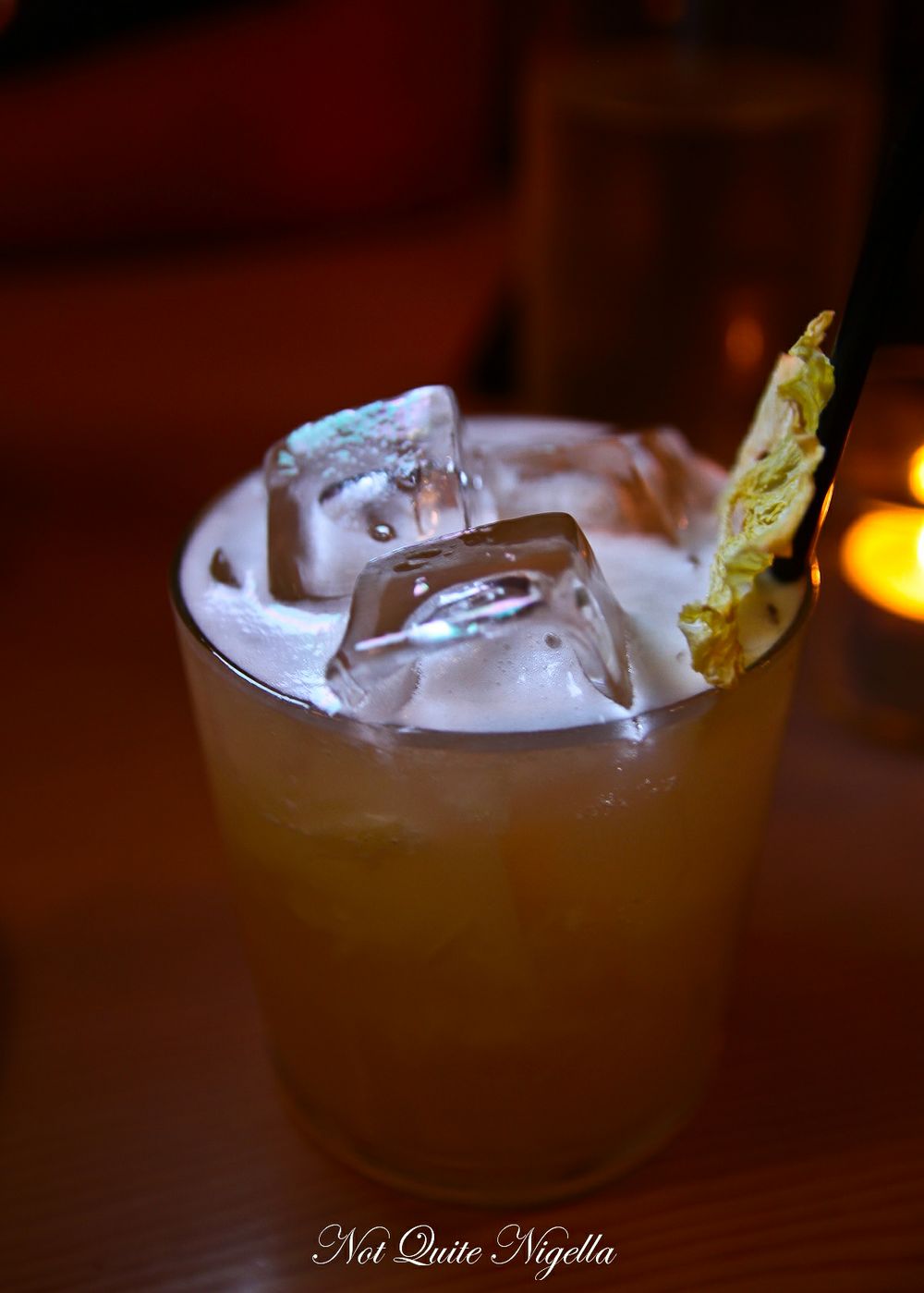 The Pisco Punch is a refreshing mix of Pisco, smoked pineapple, lemon juice and tiki bitters and I cocktails like this because they're refreshing without being overly sweet, much like a fresh squeeze lemonade would be. 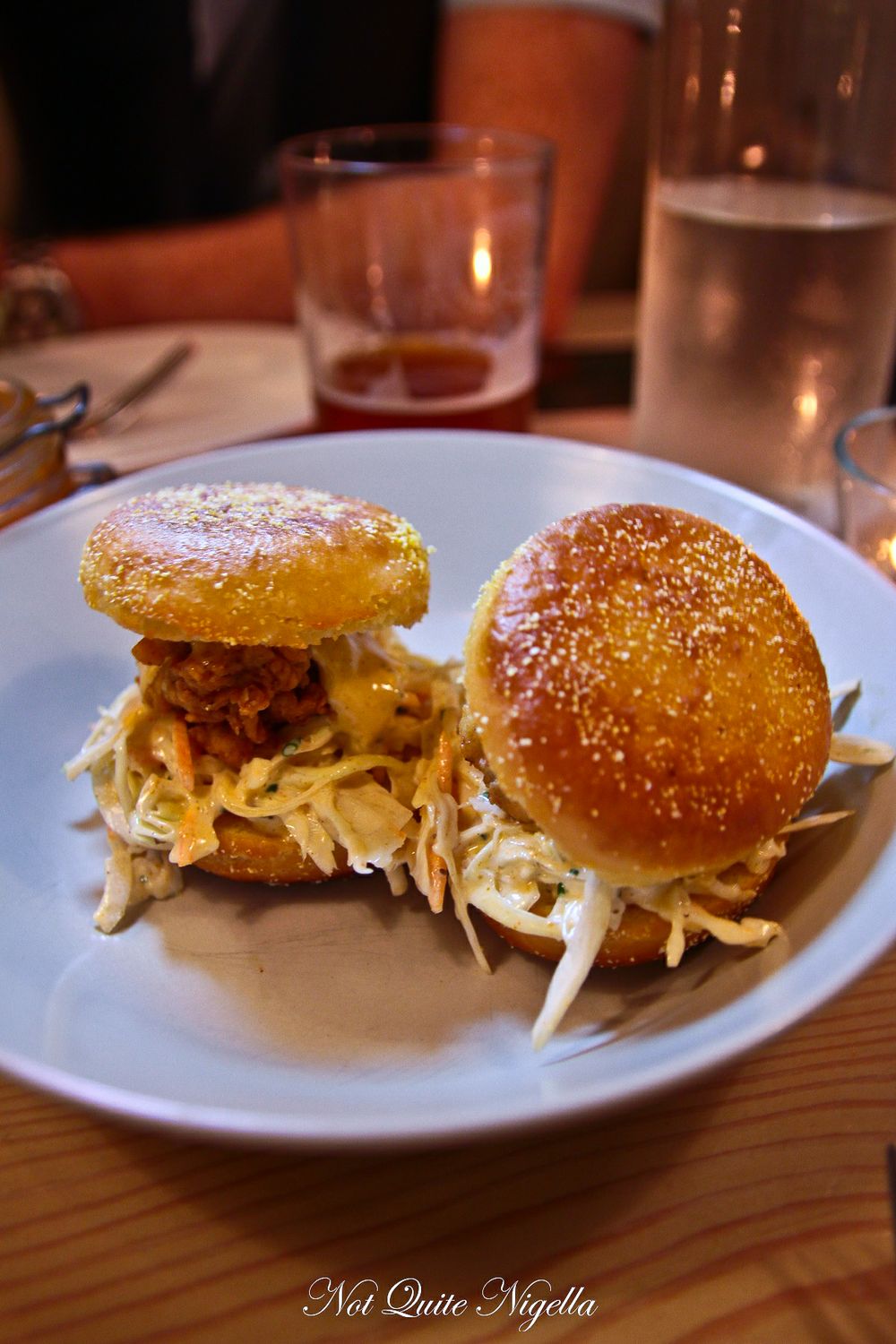 Mystery Guy is a travel writer and one that was besotted with New Orleans so I asked for his opinion of the oyster po' boy and he gave it a big thumbs up. The deep fried crumbed Tasmanian oysters were served in soft cornmeal dusted house made English muffins. Underneath the oysters is a creamy Old Bay coleslaw (and this gives me ideas with the Old Bay seasoning that I bought on my recent trip to the U.S., an ingredient often used in crab cakes among other foods). Oh and a plate of these are not safe around me. It comes with their hot sauce and I enjoyed the po' boys both with and without it. 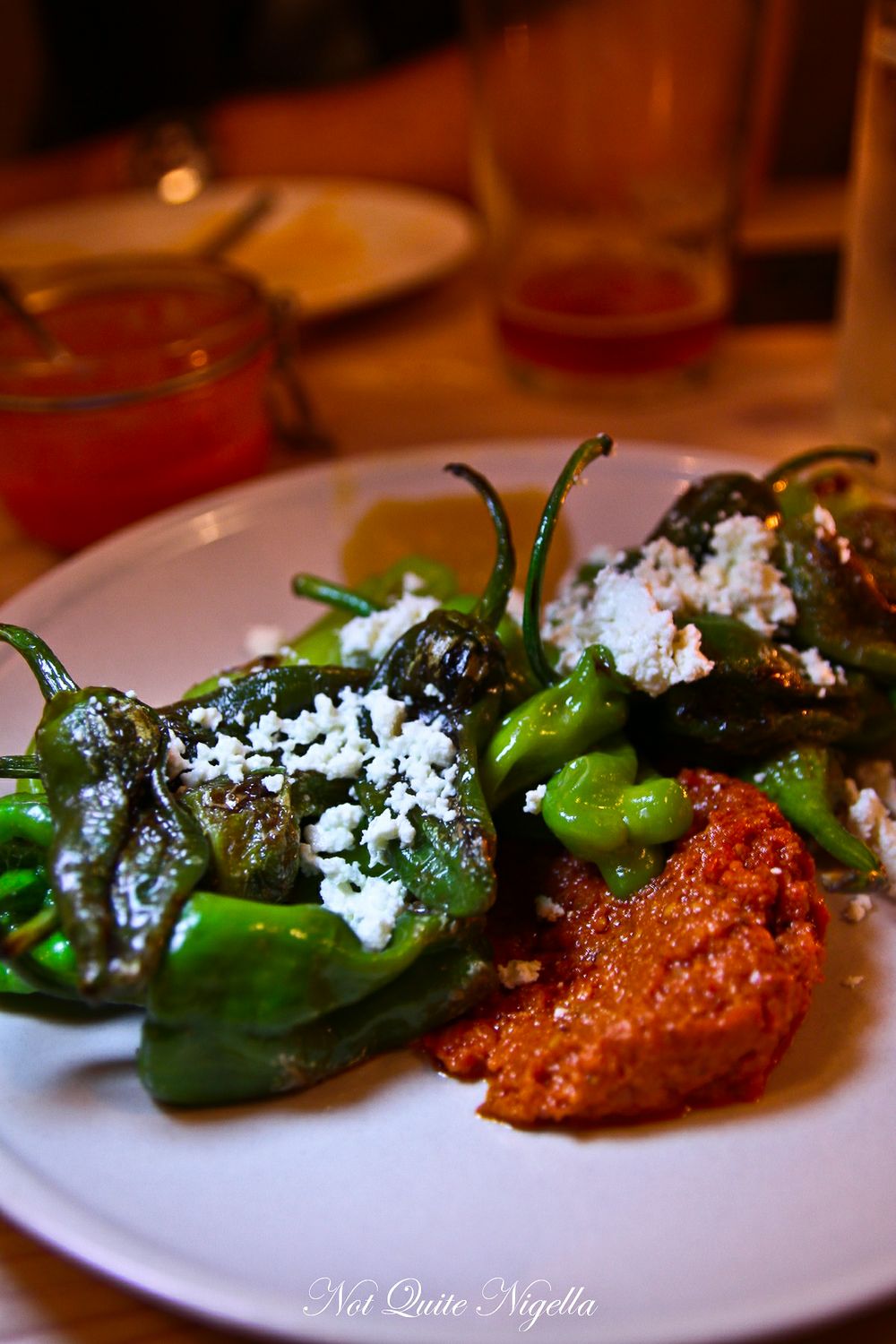 We survey the roulette peppers, some burnished darker in a two layered pile along with Bulgarian fetta, some terrifically good romesco sauce and holy-heck-what-is-this-lemon-jam-because-I-need-to-make-some? It's a new item to the menu and there are several kinds of peppers including Shisito, Rocoto, Stavros and d'Anglets. I pick up one and bite into it. "Umm is your pepper really hot?" I ask Mystery Guy because after my first bite, I am huffing quite a bit. "Nope" he answers forking bites of mild peppers into his mouth. It turns out that my first pepper was indeed the hot one. The rest are fine, they're good especially when paired with the garlicky Romesco and sweet lemon jam. "What are the chances that your first pepper would be the hot one?" Mystery Guy muses aloud. 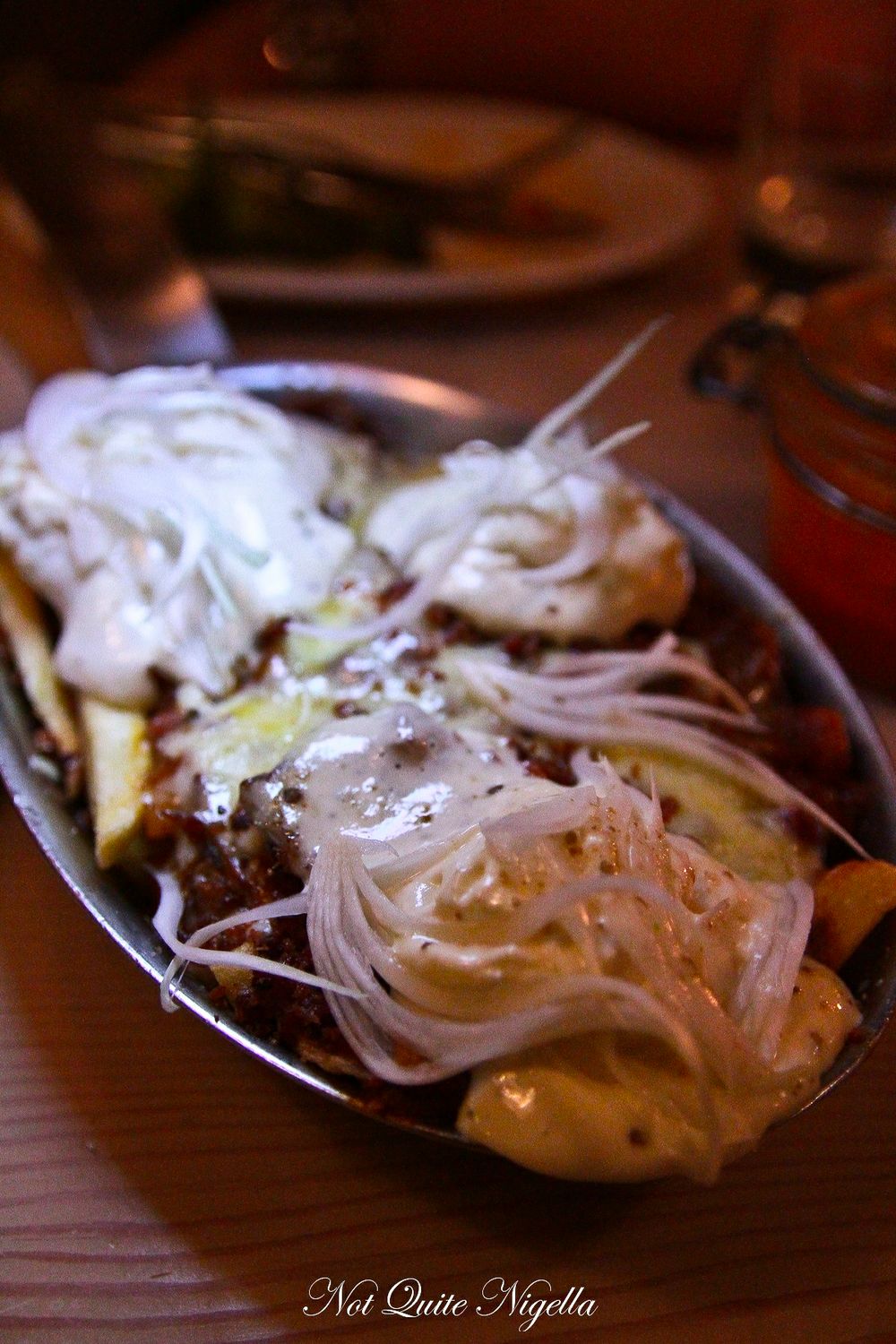 There are some meals that when brought to the table, cause a bit of a sensation. This was one of them and our dining neighbours craned their necks for a closer look. It's no secret I'm a nut for poutine after my visits to Canada and this is an homage to poutine. The base is layered with a bechamel and then the fries are seasoned in coriander, citric acid and lime zest. On top of this is chilli made up of chunks of diced beef shin (not mince), onion, tomato and chilli, three Mexican chillies (Cascabel, Ancho and Guajillo).

On top of this (and you can see why it caused such a sensation as it was enormous and multi layered!), was melted cheddar, smoked bacon powder, clouds of ranch dressing and onion on top. The whole shebang is something that you just have to attack with abandon and vigour. There are layers upon layers and it is obviously rich but oh so moreish. Whilst you may not eat this on every visit on doctor's advice, it may as well be one like this. 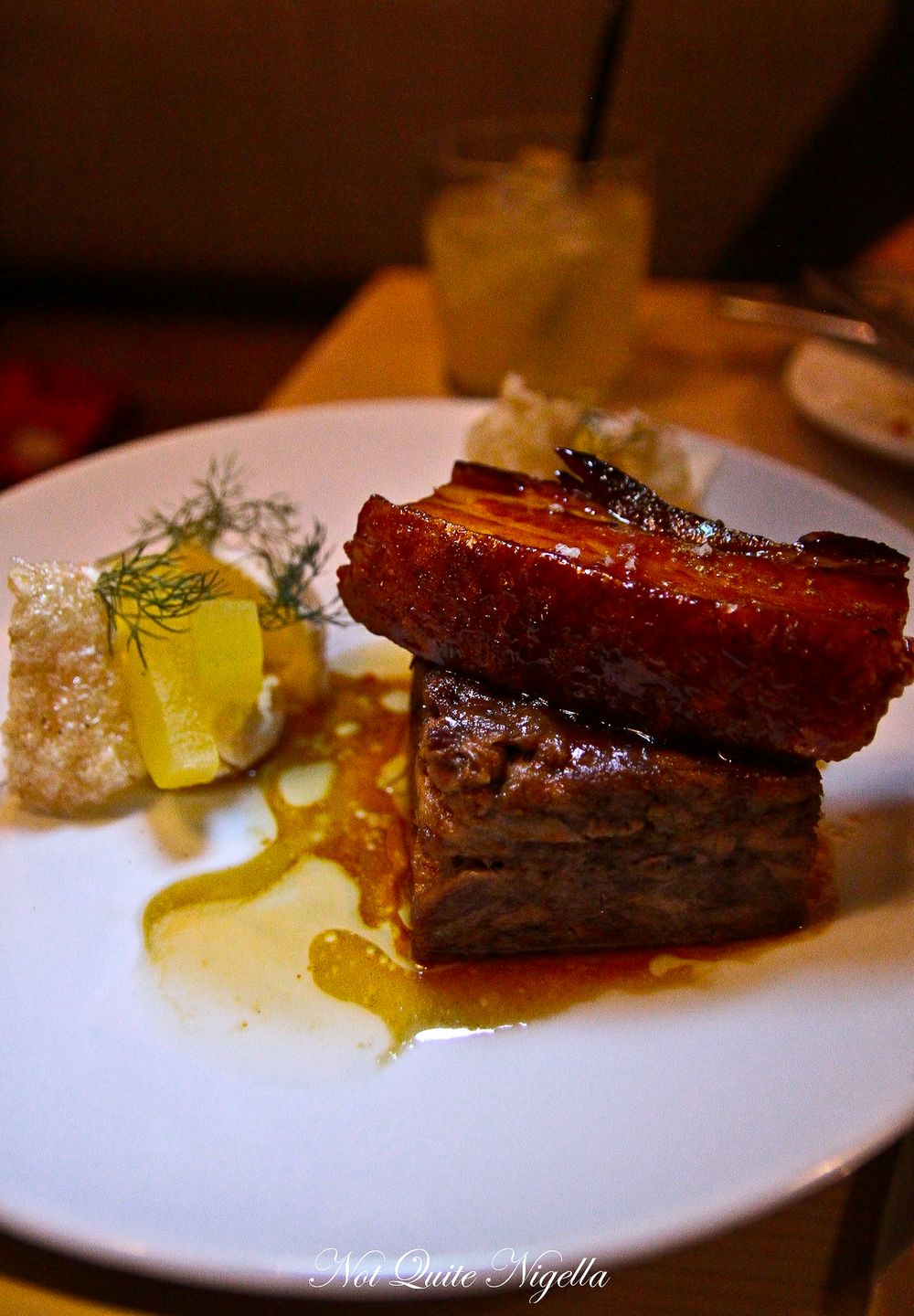 We were tossing up between this and the beef brisket and although we ended up with two rather meat heavy dishes, we saw some lighter fare-it was just going to other tables and not ours! ;) The pulled pork has been brined for 24 hours and then hickory smoked for 10 hours and is served as a square of soft, fall apart meat. It comes with smoked maple glazed bacon cut as a thick pork belly slice, all sticky and sweet and melting. To the side is labne (yogurt cheese) with chilli cider soaked apple pieces which still retains a good texture to it and is the perfect counterpoint to the rich meat. On top of that is popped pork rind. 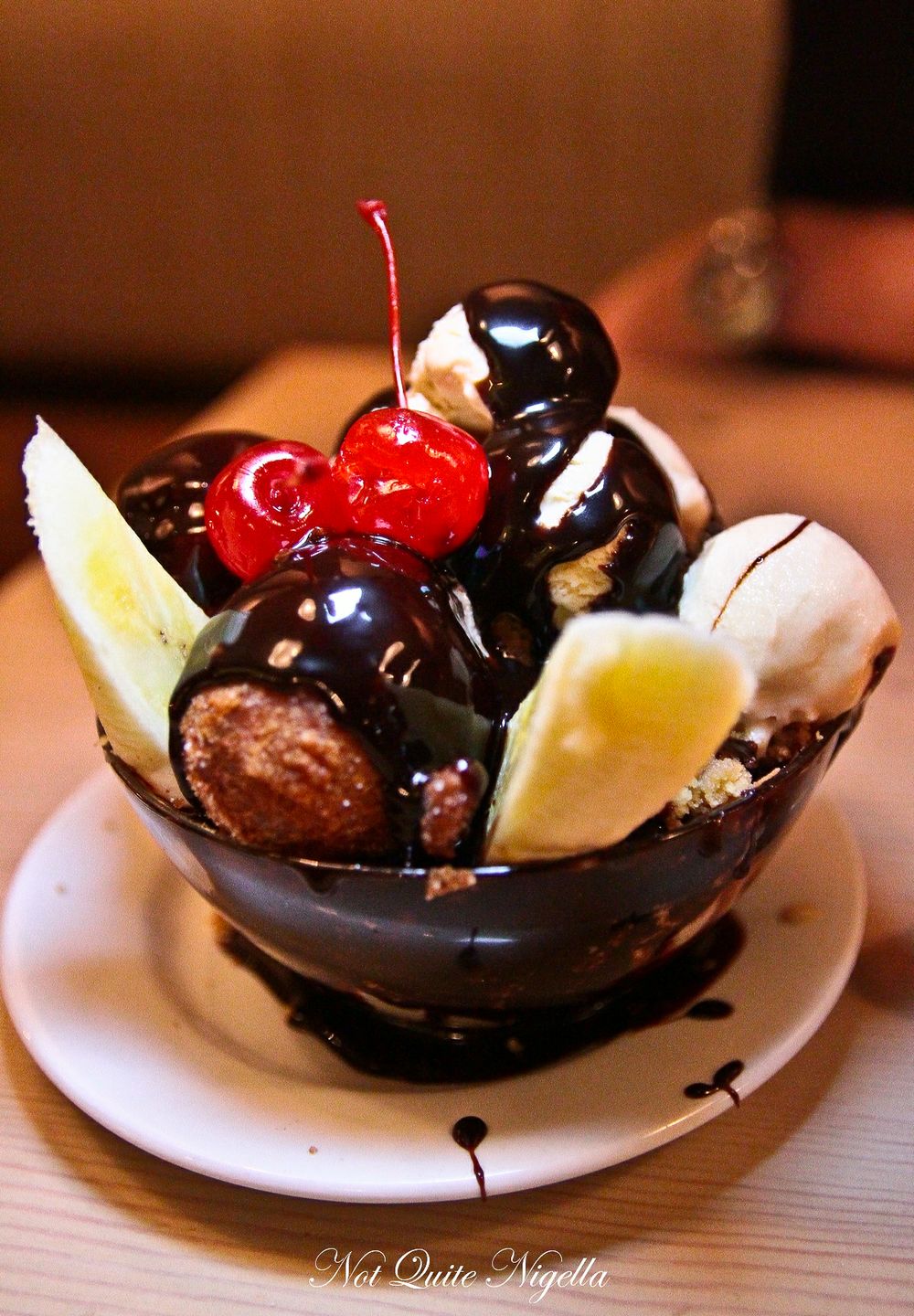 A saner person would have had a rest and chosen a digestive herb tea with leaves picked from the Hartsyard Greenhouse but it was getting late so we decided to share a dessert. Having been here before, Mystery Guy suggested that the Peanut Butter and Banana Sundae on the basis that it was absolutely epic and that sounded like a good enough reason for me. When it was brought to us, the front of house manager goes through it blow by blow and layer by layer and if ever there was a dessert equivalent of the poutine, this would be it. It's pure Americana with banana cream filled doughnuts, pretzel ice cream, salted chocolate fudge and crunchy crumble topped with two maraschino cherries. Every spoonful gives you a generous topping of glossy, thick chocolate fudge-the bowl is even anchored to the plate below with the fudge. Madness undoubtedly, but in a good way and I think it could feed at least three or four people. 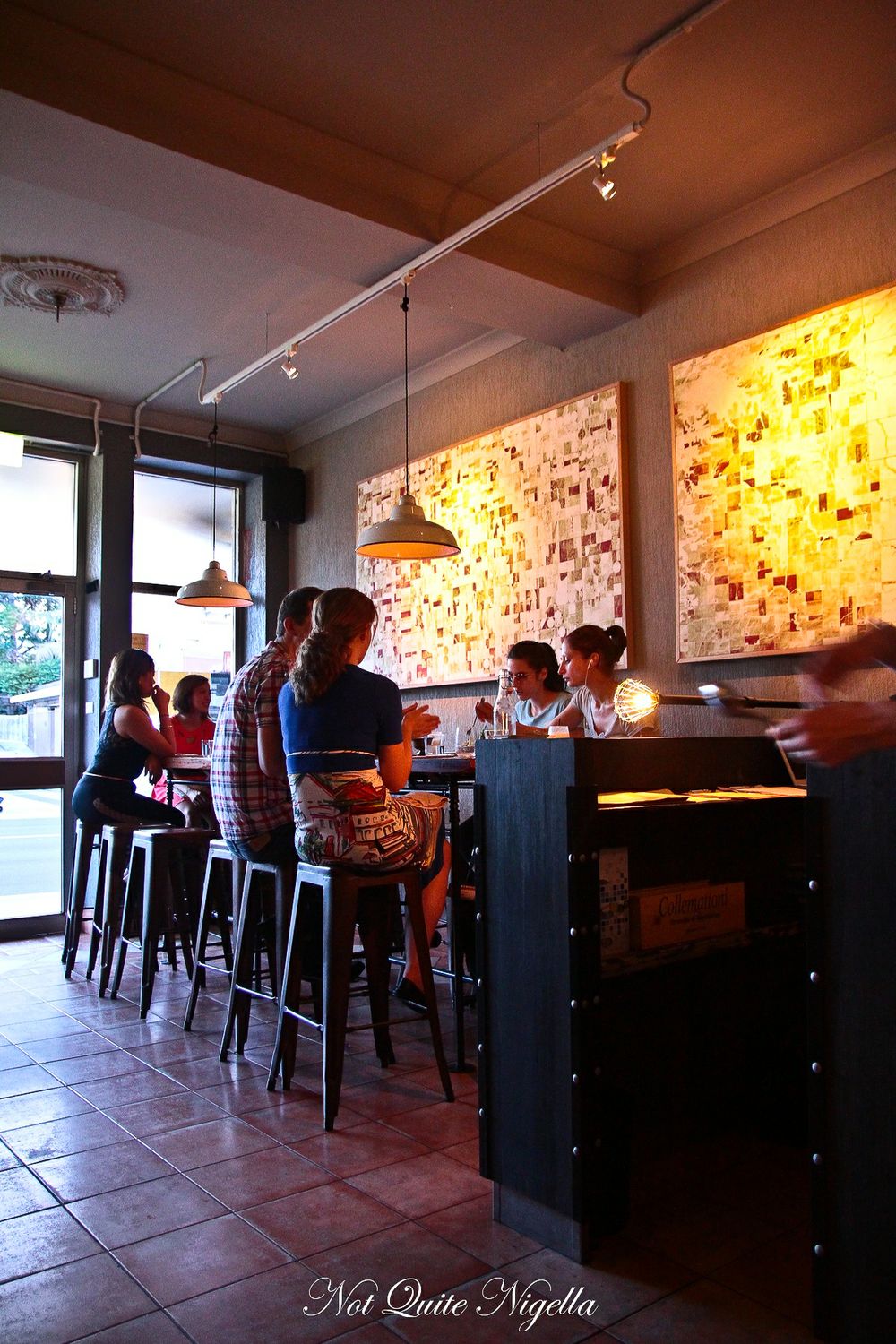 I returned a few weeks later with friends Teena and Gina. Just because sometimes, you bang on about a place so much that your friends insist on visiting. Teena booked online and we had a seat at the front of the restaurant. It was a hot evening so salads and lighter foods were on the menu. 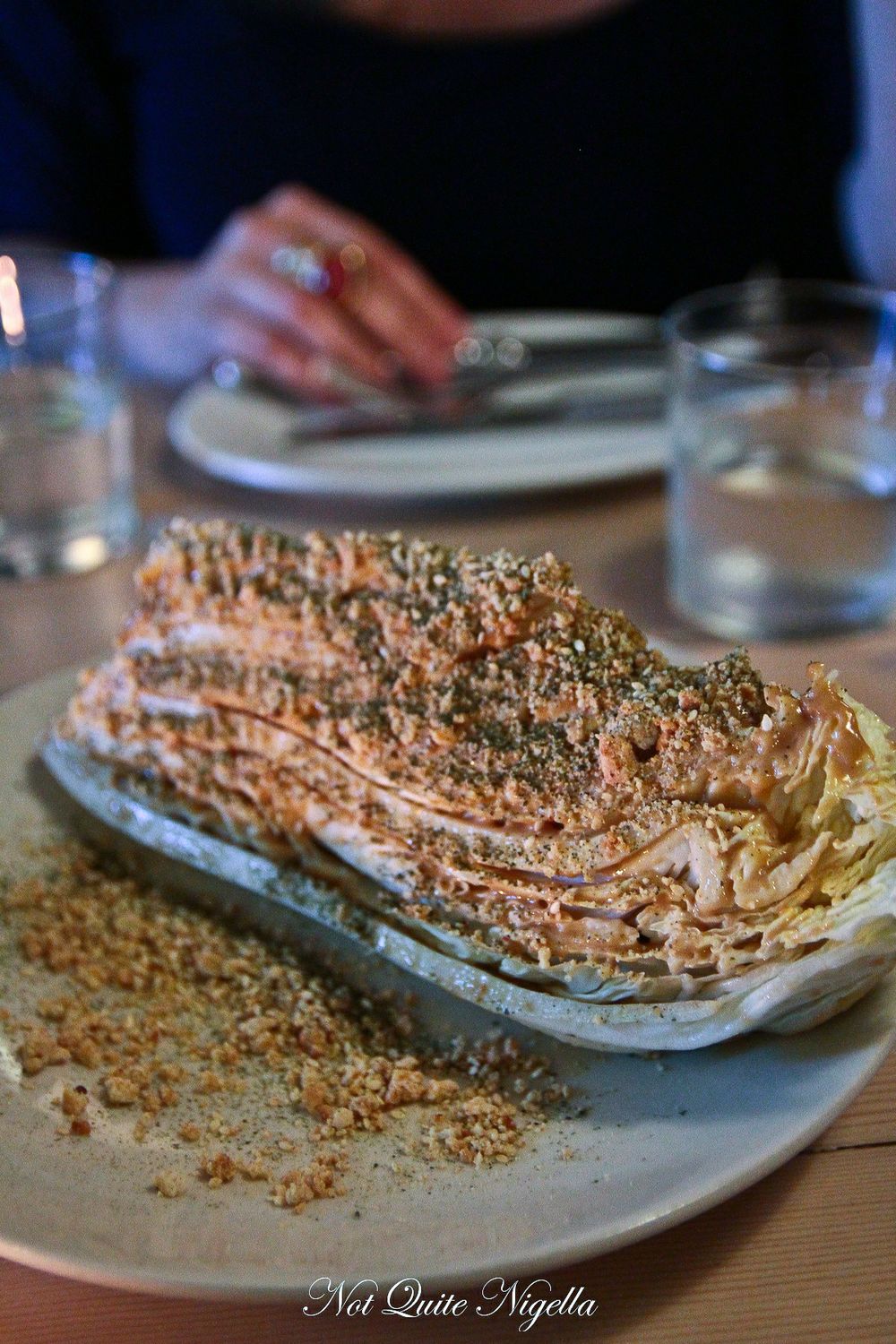 This was the item I had seen brought to other tables. It was a wedge of nappa cabbage or wombok dressed between each layer with a tahini, soy and cashew butter dressing. Sprinkled on top of it were sesame seeds and dried seaweed and the whole dish has a distinct wasabi flavour to it. It was crunchy and fresh although I must admit that I'm not a huge wasabi lover so I left this mostly to the other gals. 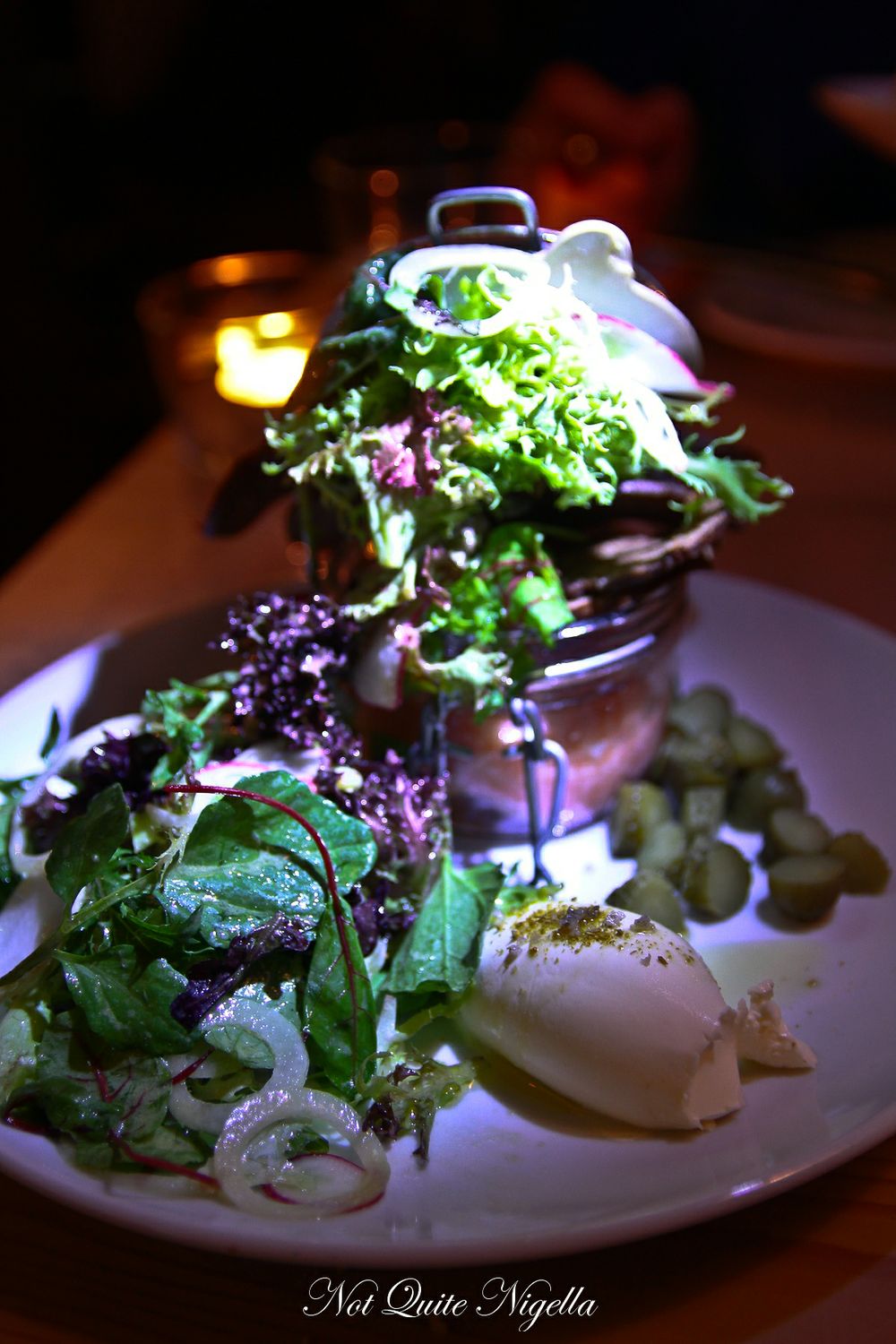 The salmon was my kind of dish. It was a filleted piece of salmon cooked in a jar set in a water bath for forty five minutes. Underneath the salmon is a piece of serrano ham and the salmon itself is so soft and light that you could spread it like a pate. To go with this are home made rye sourdough crackers, home made cornichons and an assortment of young lettuce. To finish it off is some crème fraîche with fennel seed salt. I particularly liked the lighter option and the fennel crème fraîche, crackers and salad are crunchy against the silky salmon. 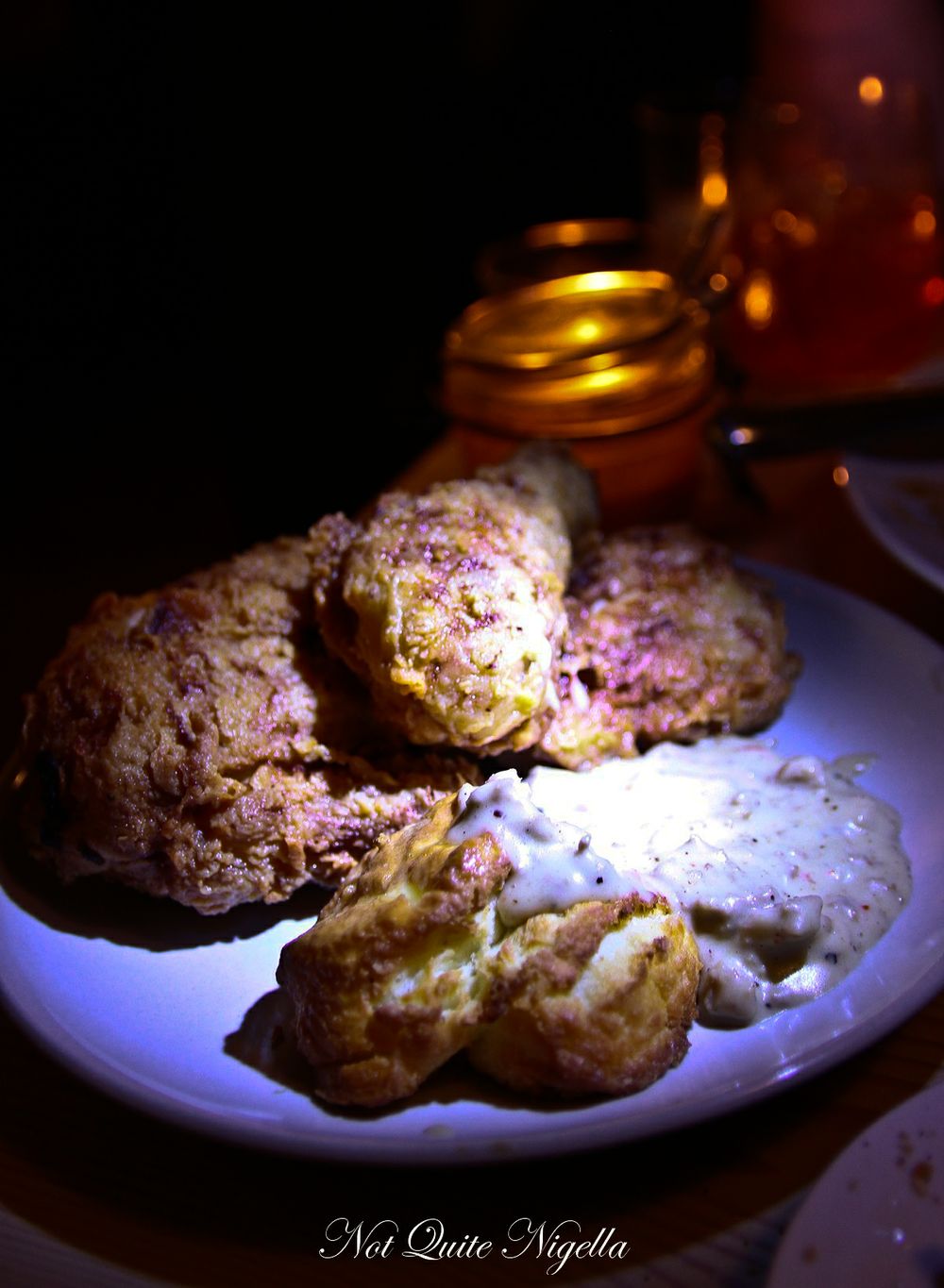 I couldn't resist the fried chicken. Oh how I love it so. This serve has a rib, thigh and drumstick coated in the crunchiest batter. The process for this chicken is long and involves a water bath, something I don't really have the patience or bench space for so I figure to order it here is prudent. It comes with a low country sausage gravy which is like a white sauce gravy with sausage mince in it and a hot buttermilk biscuit. It's served with their hot sauce and I think that I ate most of this! 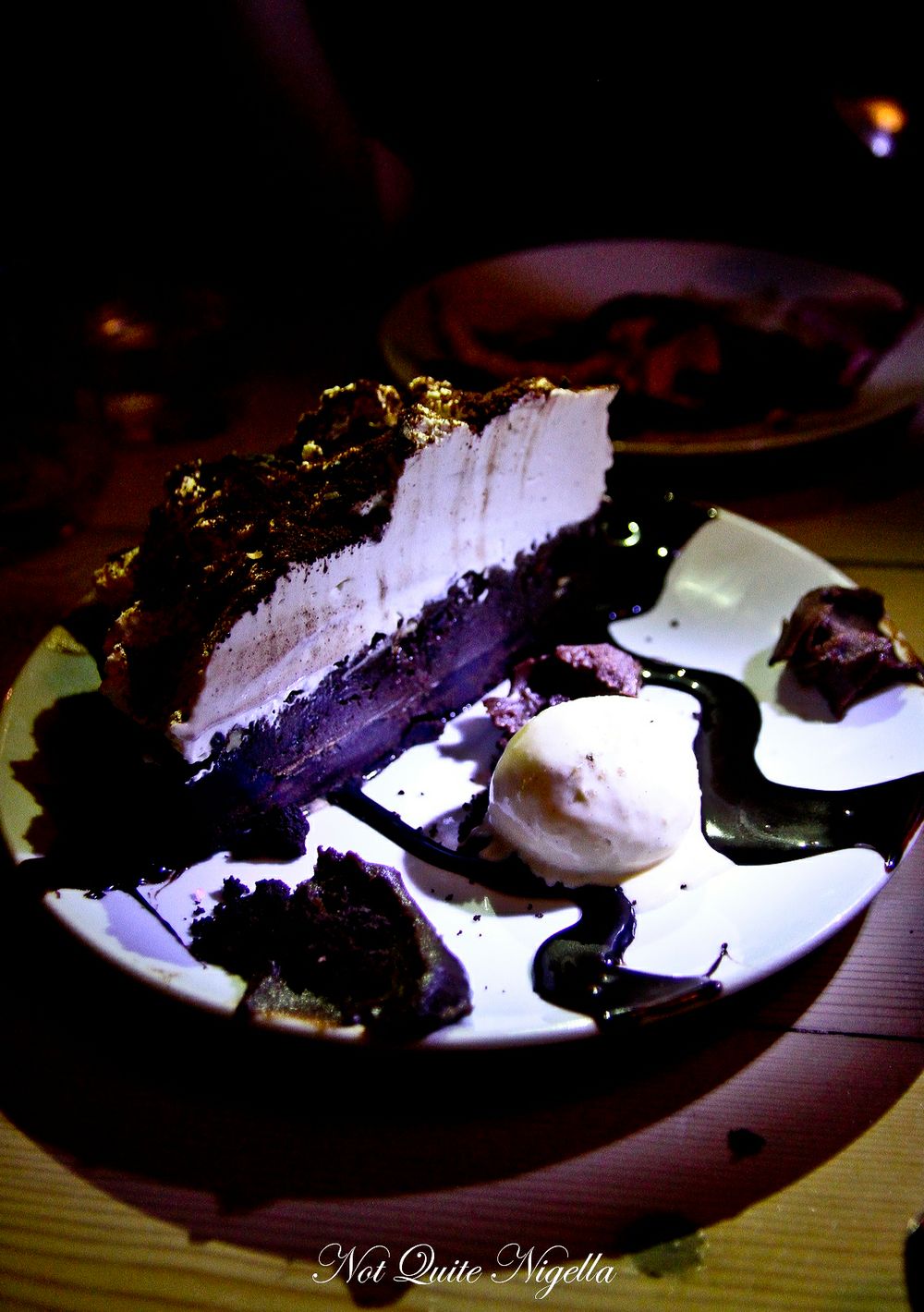 Forget the id and the ego fighting, there was a part of my brain that was fighting itself. Do we go for the Pie of The Week or the deep fried Oreo? Neither are going to do my diet any good and if we know Hartsyard servings, they're hearty, especially the desserts which could feed a small family. But given my previous career baking pies, I was swayed more towards the pie and when it was described as a chocolate on chocolate crust pie with chocolate sauce and salted caramel then well, of course you go for it. There are small chunks of candied pecans inside the pie which comes out as a gargantuan slice drizzled with chocolate sauce with a scoop of ice cream and little pats of thick salted caramel. It was rich, decadent, sweet and undeniably chocolatey. 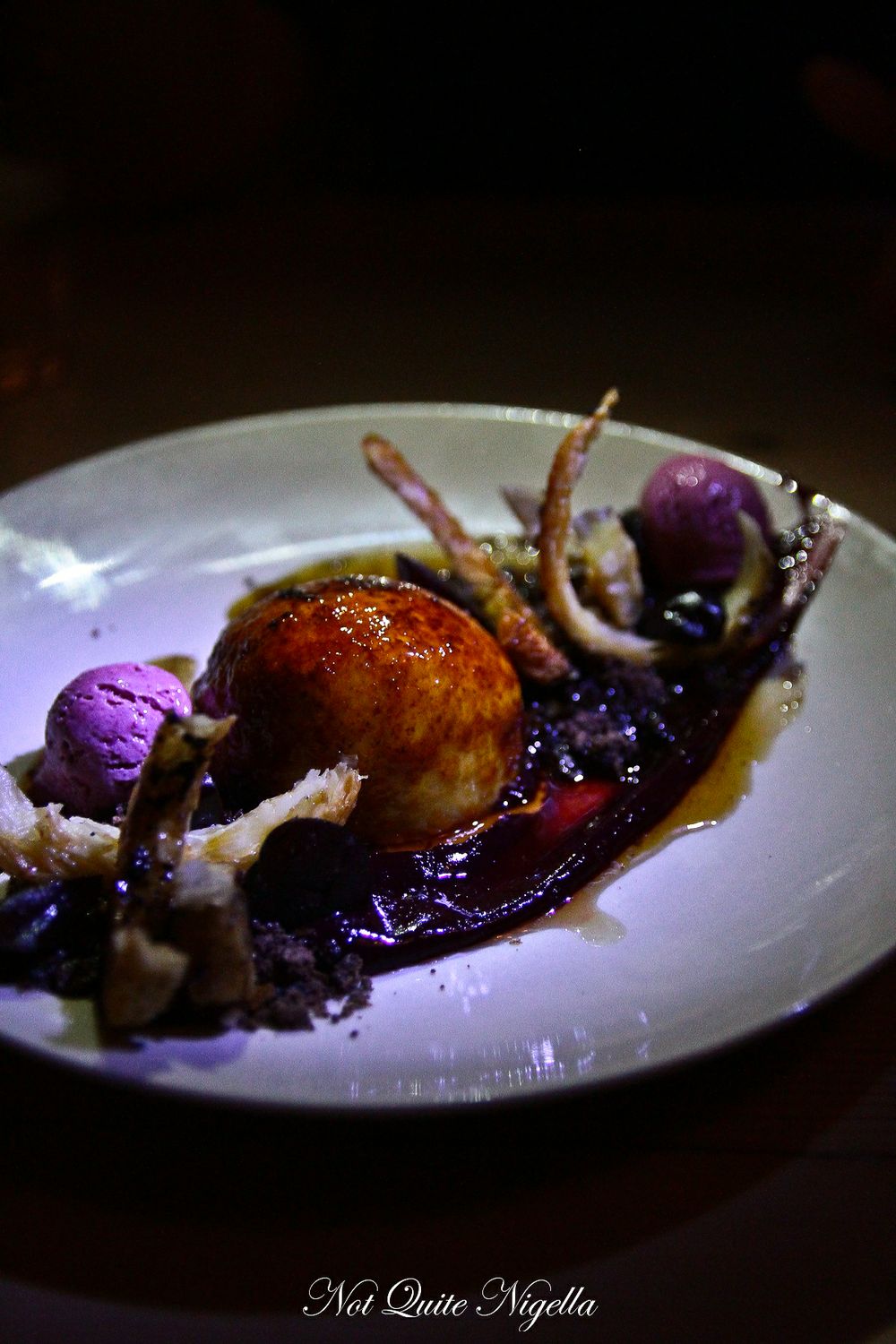 By comparison the maple brulee was more modest. Gina's choice (she's a Canadian eh! ;)), it appeared more as a half orb with a crunchy layer on top, a sweet, strong maple flavour to it and with crunchy deconstructed palmier crescent moons. It sits in a rich chocolate and dark cherry ganache with two petite scoop of cherry ice cream.

So tell me Dear Reader, what is on your list of "must eat" restaurants? And have you ever tried poutine? 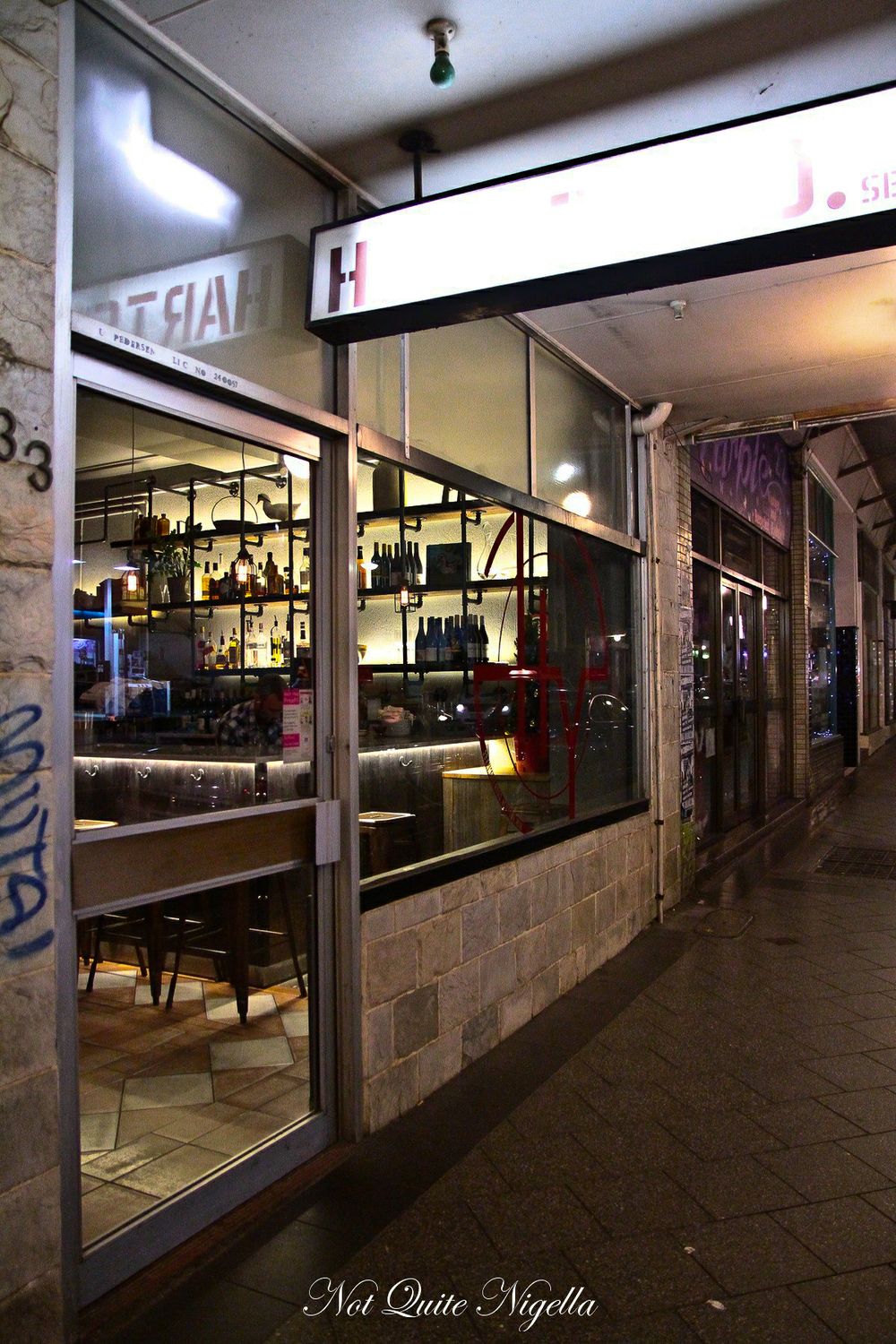