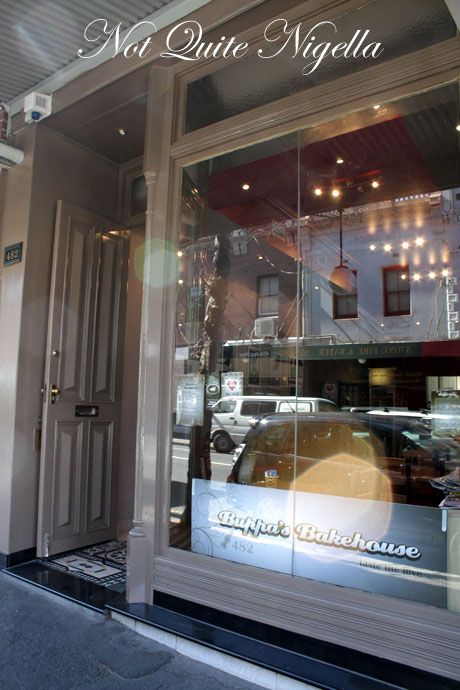 I realise the title of this story sounds like one of those wonderfully magical children's tales (and there is a little bit of a tale of a small child for you here too). The Ugly Cake that I speak of from Buppa's Bakehouse in Newtown is not very ugly at all, despite the name. Buppa, a childhood nickname that stuck, contacted me a couple of weeks ago asking me if I would like to come in and taste her home baked goodies at her American style bakery, all made by her and her alone. I was in the throes of the flu (and no, not Swine Flu) and despite wanting to try them straight away, I begged off until my taste buds were back. They came back shortly after and I was looking forward to my visit. 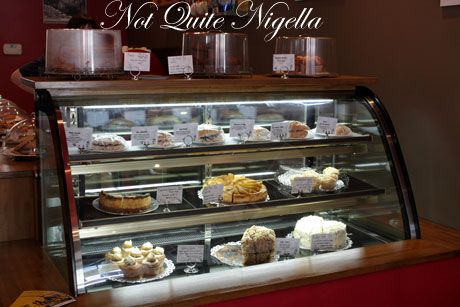 Open for a mere 5 weeks, Buppa's Bakehouse (Buppa rhymes with Papa) is on the quieter end of King Street in Newtown.  In an elegantly hued building, it has a sparkling shopfront but you'd have to know it was there to find it amongst the jumble of shops. Buppa shows me her range of items and they're certainly American in theme with peanut butter, chocolate and cream cheese featuring in many, cookies in many forms, all manner of American cakes and of course _real boiled bagels _- the New York way.

"My baking philosophy is that things should contain real ingredients, look delicious and be highly edible rather than just decorative. I am hoping that my homemade style catches on and people start to remember what real cheesecake tastes like rather than the ones you can get that came out of a box, shipped from a warehouse etc." she says. She's more West Coast low key (actually San Franciscan) rather than the forward driven East Coast type. 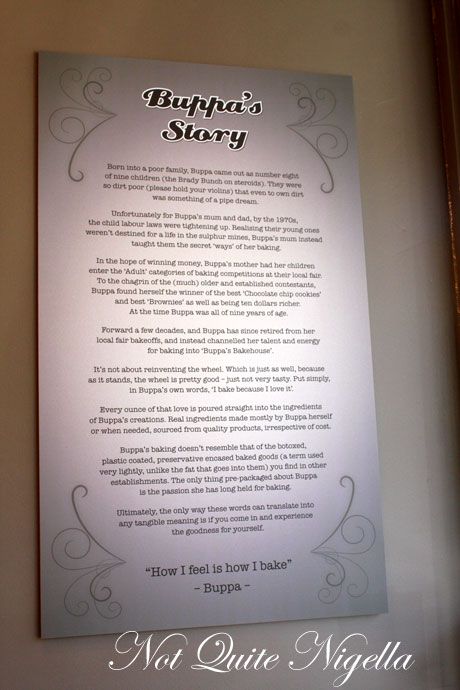 Her story is interesting too - as the story goes she grew up very poor and to supplement the family's income, her mum would enter baking contests but as there was a limit to the number of entries she could make, she entered under her children's names. Buppa however was one of the 9 children that could cook so she entered her own goodies and ended up winning many prizes. The $5 for the children's division and $10 for the adult's division would prove a windfall for the family and set off a baking obsession for decades on and would urge her to quit her teaching job at an international school to open the bakehouse. 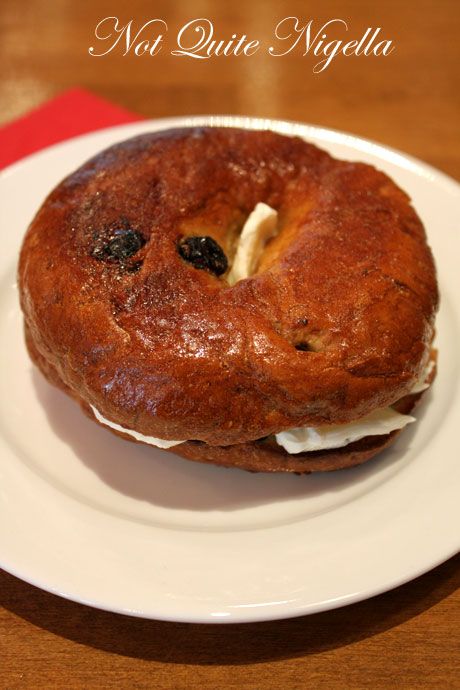 I started with a blueberry bagel with cream cheese. She brings it out toasted and it's generously spread with cream cheese. "It's American style!" she says. "You've been to America right so you know that everything there is over the top and very generous in size" she says. The bagel is indeed a real boiled bagel with real blueberries (and her trick is to use dried blueberries which are costly but fresh ones are too soft). The cream cheese is thickly spread and some falls out as I bite in but it's delicious. And yes it's a bit more home made looking than bagels you may see which are made on a machine but that's the point. 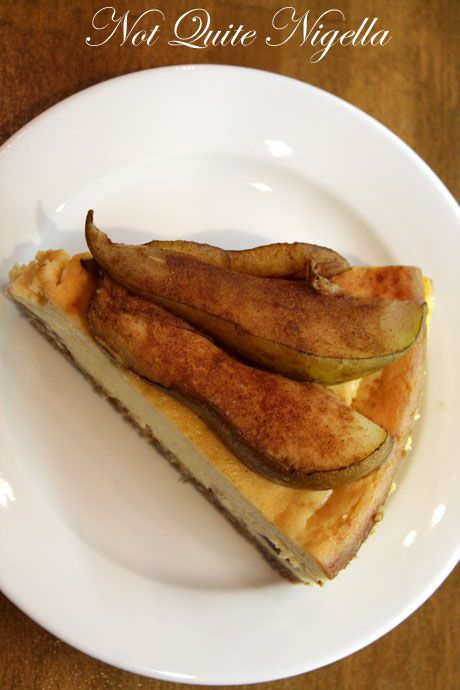 The baked cheesecake has small chunks of stewed cinnamon pears and plum and is topped with Beurre Bosc pears and cinnamon sugar. The filling is beautifully creamy and yet light. The buttery, crunchy crust is fantastic - possibly my favourite cheesecake crust ever and never discount the power of cheesecake crust. Get the wrong biscuit and it won't be nearly as good. 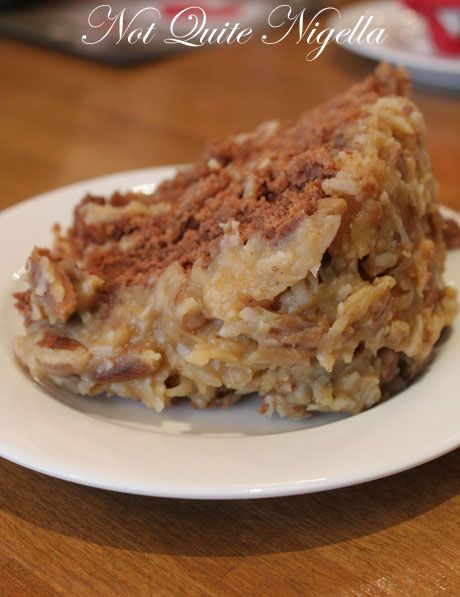 The fabulously named Ugly Cake is a milk chocolate cake much like a German Chocolate Cake (a very American cake despite the name) with pecans, caramel and coconut frosting. Whilst I adored the coconutty and nutty frosting the cake inner was a bit too dry for me. But ugly it aint. 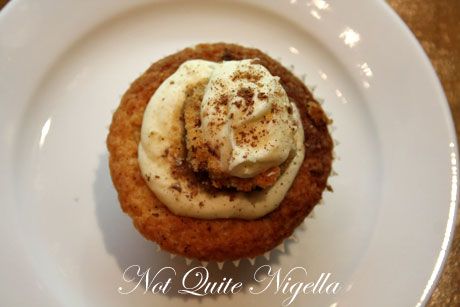 The Tiramisu cupcake is a butter cupcake soaked in espresso and kahlua syrup and cream cheese frosting dusted with cinnamon sugar. Unfortunately I didn't take a cross section photo but it would have revealed the centre of a butter cupcake (with a fantastic crunchy top) cut out and filled with a cream cheese filling that is just the right level of sweetness, just the right amount of coffee so that it's not bitter and it's rich, moist and mouthwatering at the same time. 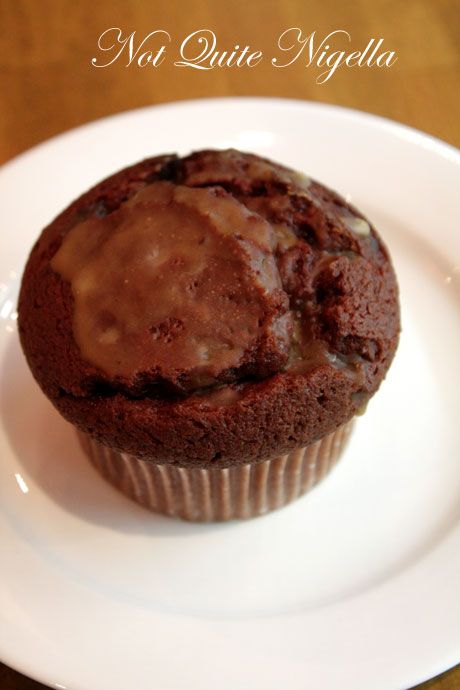 The Drunk Man's muffin is a chocolate muffin with a hint of vodka and kahlua with kahlua glaze. It is so moist and soft-wondrously so and with that distinct note of kahlua and vodka. It's plain chocolate inside so if you want a bit more filling the Tiramisu is yours but this one certainly does well as a muffin. 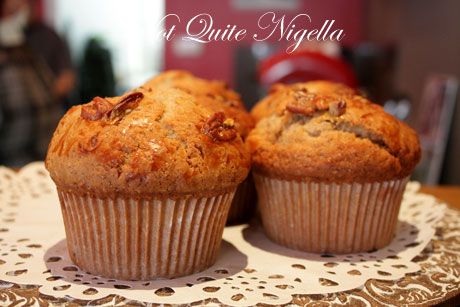 We try the Banana, cinnamon and pecan muffin which is full of fresh bananas. It's best heated up and slathered with some butter as it can tend to a bit too dense and on the dry side otherwise. 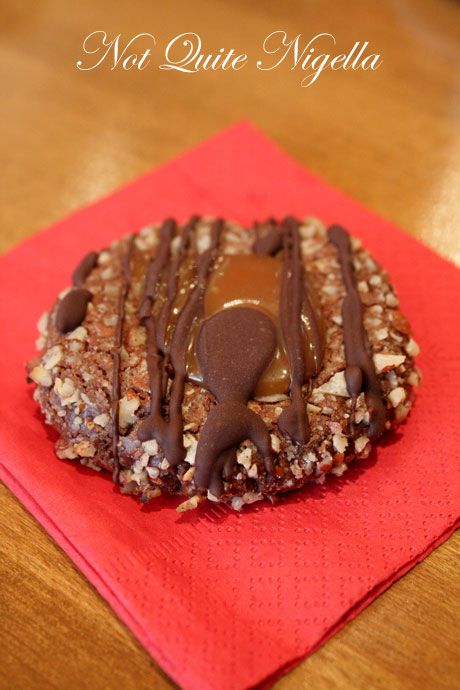 Onto the cookies! This chocolate cookie is coated in pecans with melted caramel and chocolate drizzle. And did I mention in the centre of this is a pool of melted caramel? Have you any idea how genius that is? Yes? Ok good. Not surprisingly this is one of the best sellers with one woman requesting a spoon to scoop out the caramel. 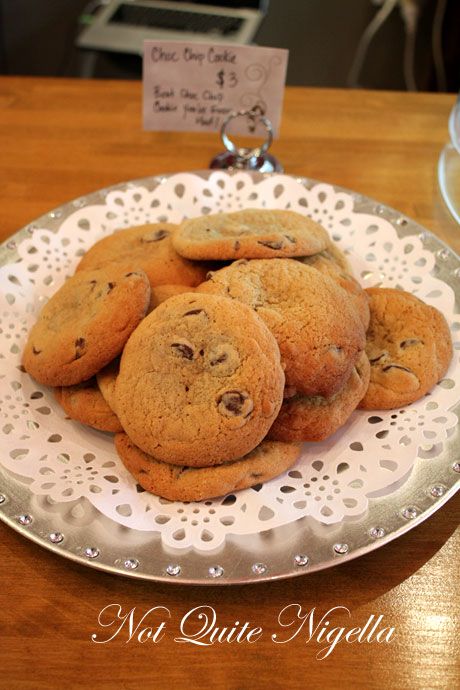 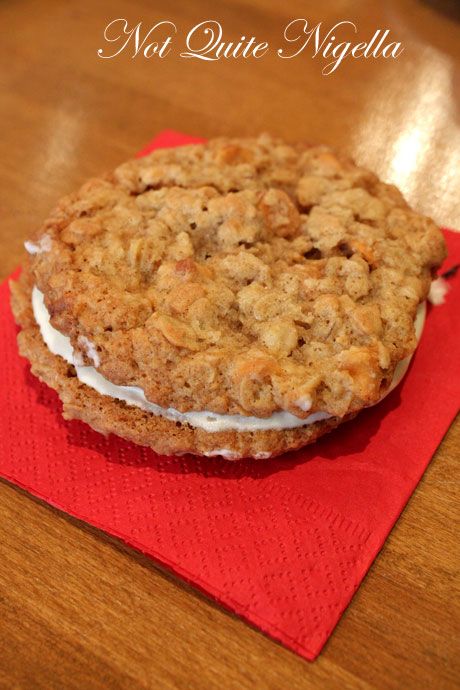 My favourite cookie however is the oatmeal sandwich cookie. I have a complete love of oatmeal cookies and cream cheese frosting and this one has butterscotch chips and cinnamon in it and is fused together with cream cheese frosting. So you can see how despite the fact that it is two large cookies with icing, I cannot resist its buttery, crunchy goodness. 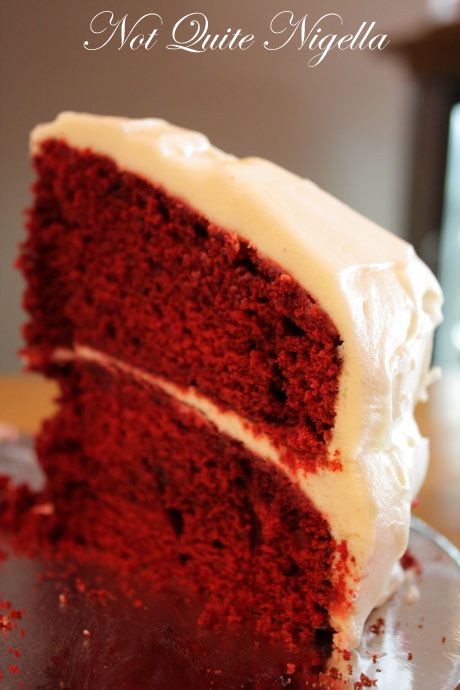 I had to go back to Buppa's another day and she had some new cakes in the cabinet. Including... you guessed it, a Red Velvet Cake! We had Red Velvet cake for our wedding cake so I love this cake. I like the flavour to this although I do prefer them a smidge more moist and with more frosting. But you know me...cream cheese icing monster. 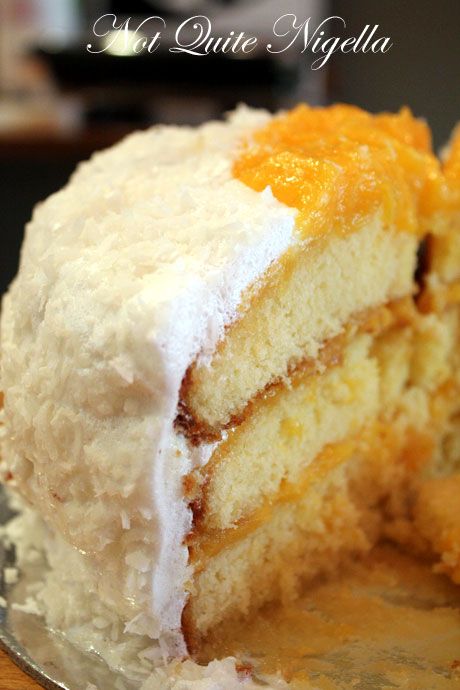 The Sunny Side up is a huge slice of a light, large crumbed moist lemon cake with a sweet lemon curd with a boiled coconut meringue frosting which I'd describe as a cross between a homemade marshmallow and meringue. It's an unusual twist on the lemon meringue pie and nicely moist. 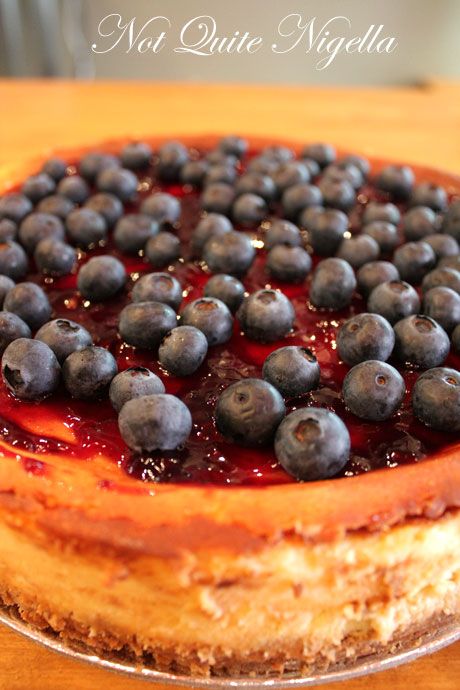 I've said how much I love the cheesecakes and the blueberry one somehow managed to be light yet creamy. Even though I rarely eat a whole piece of cheesecake, this lightness enables me to scoff entire slices of this and yes it comes with that buttery, crumbly aromatic biscuit base - a mix Buppa has experimented with to try and make her own version of a Graham cracker crust. 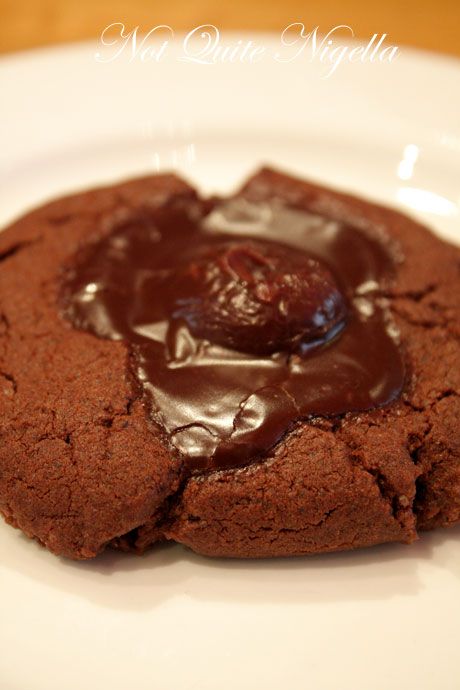 The Cherry Chocolate Cookie is a rich chocolate cookie with a pool of melted chocolate and a marschino cherry in the centre which is gooey and soft when you bite into the soft cookie's centre. 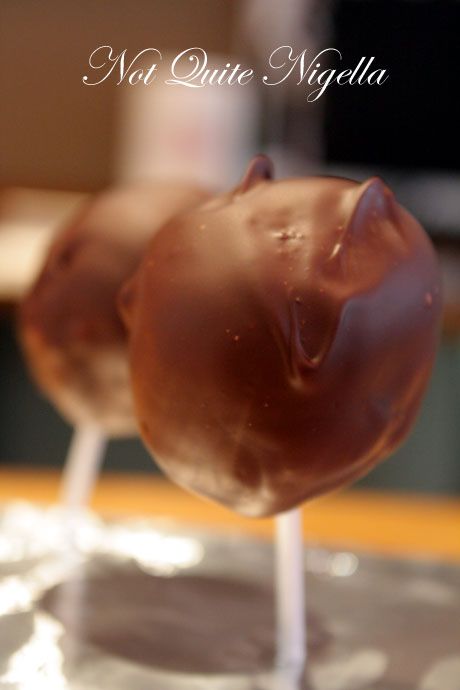 One of the cutest things that I talked to Buppa about on my first visit was the Cake Pop which she is now playing around with making. I sampled her first go at them and it's a wonderfully  moist and rich cake crumbled up and shaped into a ball with frosting and then coated in milk chocolate. Think of a rumless rum ball but made with fresh, soft cake. "I'm going to play around with the sizes and rework it" she says._ 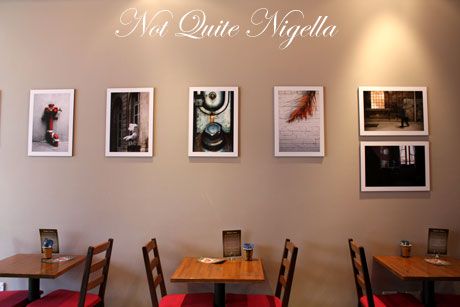 Buppa also tells me "I am constantly rotating my items because I dont want to become bored with something I love to do" and promises many more American style cakes possibly a 7 layer cake! I supress an internal squeal. 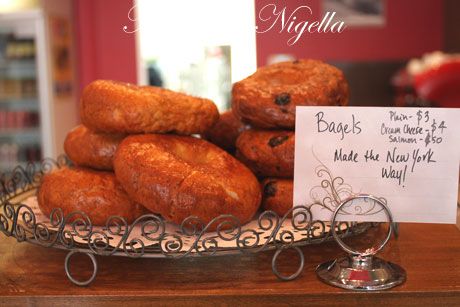 OK so it's in the quieter end of Newtown but for all American home baked goodness and some home baked love, it's worth the trip - and not an ugly cake in sight. And after my second visit when I brought home the cake box and greeted my Mother with it, her eyes lit up and she enquired hopefully "Buppa's?".

And if you needed another reason to visit, Buppa's will also be one of the select delis that will stock Ben & Jerry's Ice Cream when it comes out in October! 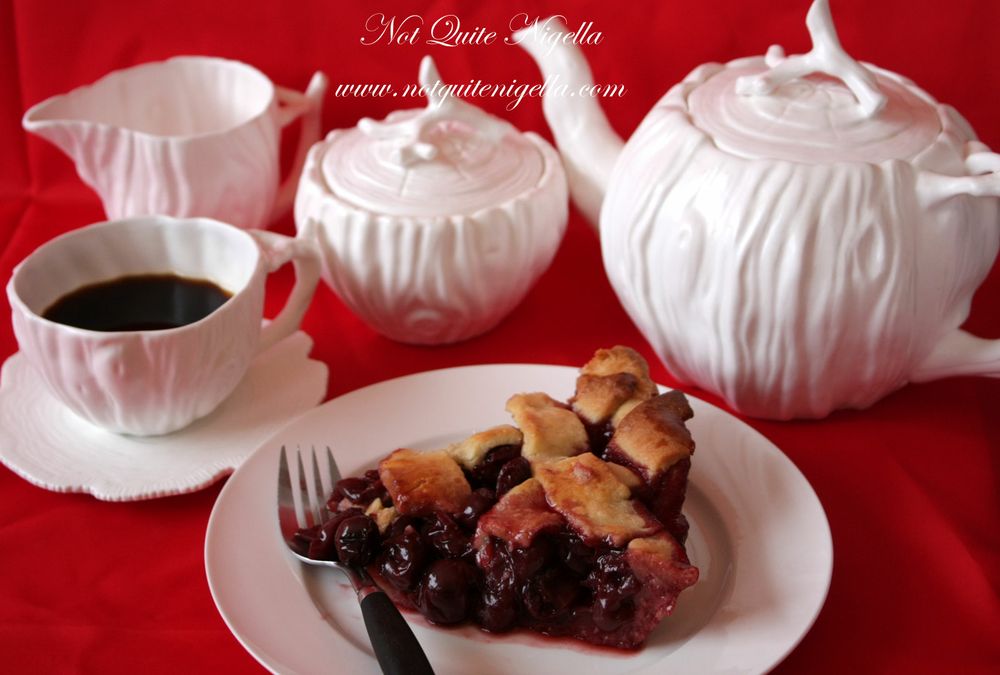 And while we're on the subject of American food, forgive my tardiness but here's your Wallpaper Wednesday wallpaper. Agent Cooper's Cherry Pie!