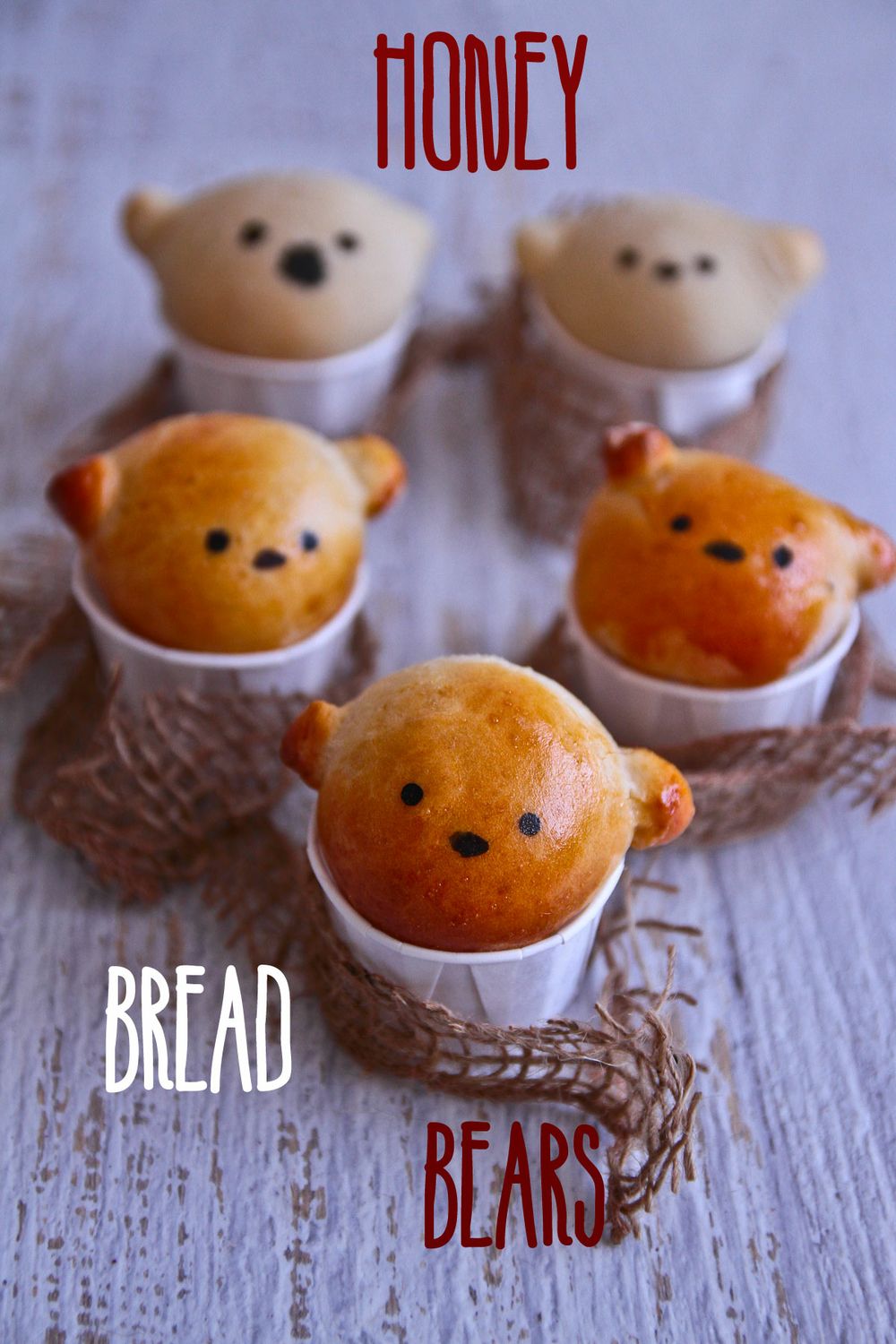 When I was a child, I was in a television advertisement. My mother's friend had whispered to her that they needed Chinese children to film an ad for Kan Tong and that each child got paid $100. Back then, $100 was pretty good for a couple of hour's work and all we had to do was turn up wearing white t shirts.

They took a quick look at us and our China Doll haircuts and gestured for us to go through. Along with hundreds of other children, we sat down at long tables and were given bowls of Kan Tong sauce with spoons. All around us were other Chinese children with similar haircuts (a version of a bowl haircut really, except my mother never used a bowl). 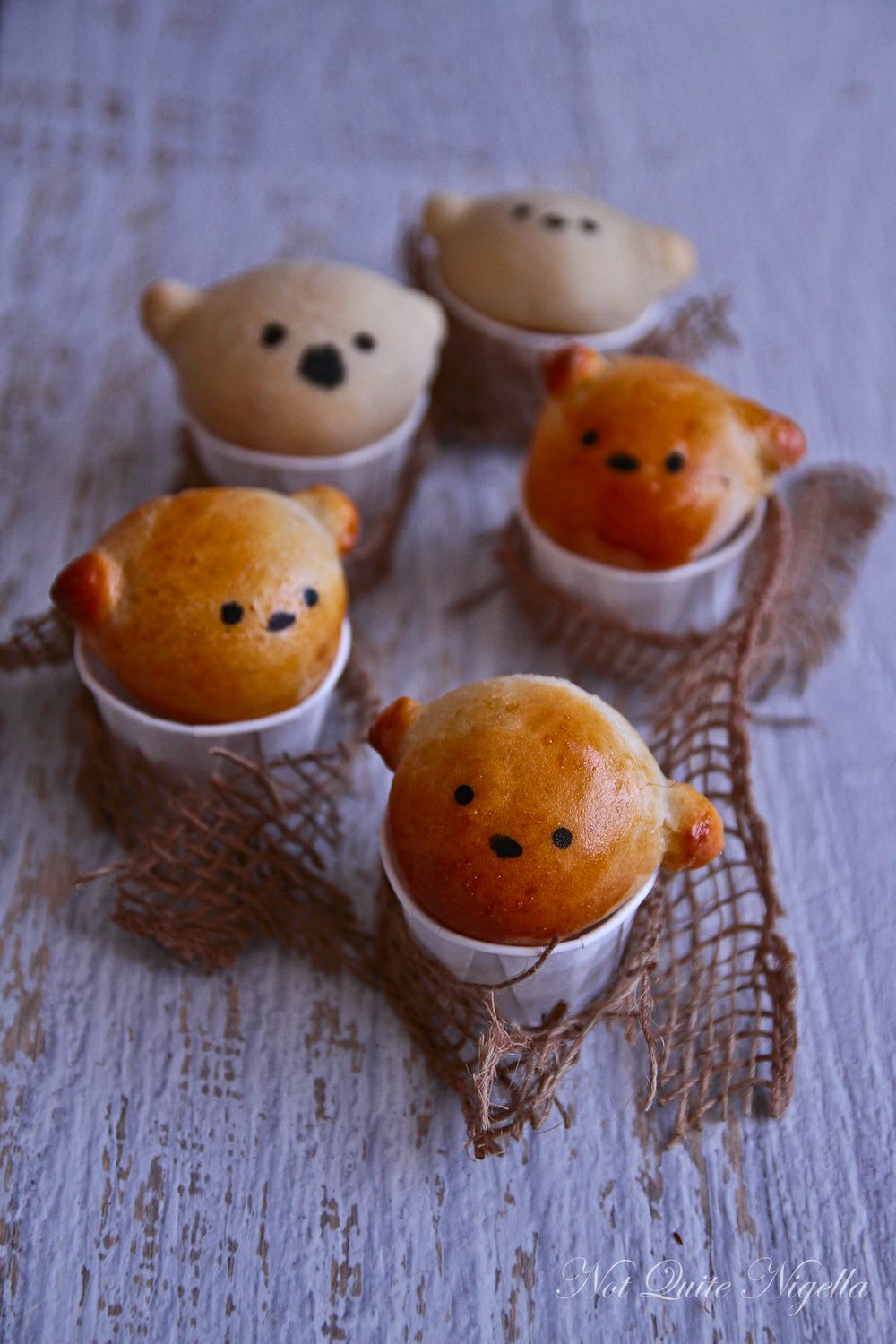 "Look as though you're having fun eating this!" the director said and we picked up our spoons and dug in. "Yuck" I said and my sister followed suit. The sauce was absolutely dreadful and not a patch on my mother's home made sauces. My mother came over and I told her that I didn't like the sauce but she implored me to behave as there was the fee at stake and future stardom. There would be the food item of my choice if I behaved.

So I did what I thought was the next best thing. That was not to fake it entirely but hide behind the larger child sitting next to me. Whenever the camera would pan towards us, I would take a spoonful of the bright orange sauce (I think it was sweet and sour) and pretend to put it in my mouth but instead of eating it, I'd duck behind the boy next to me.

That was of course, my first and last commercial.

My reward was a sweet bun from Chinatown. Those strange little coconut dusted buns with mock cream that seemed awfully fancy at the time. Had there been honey bread bears instead, I would have gone for those (and doesn't the range of food for kids seem so much broader nowadays?). 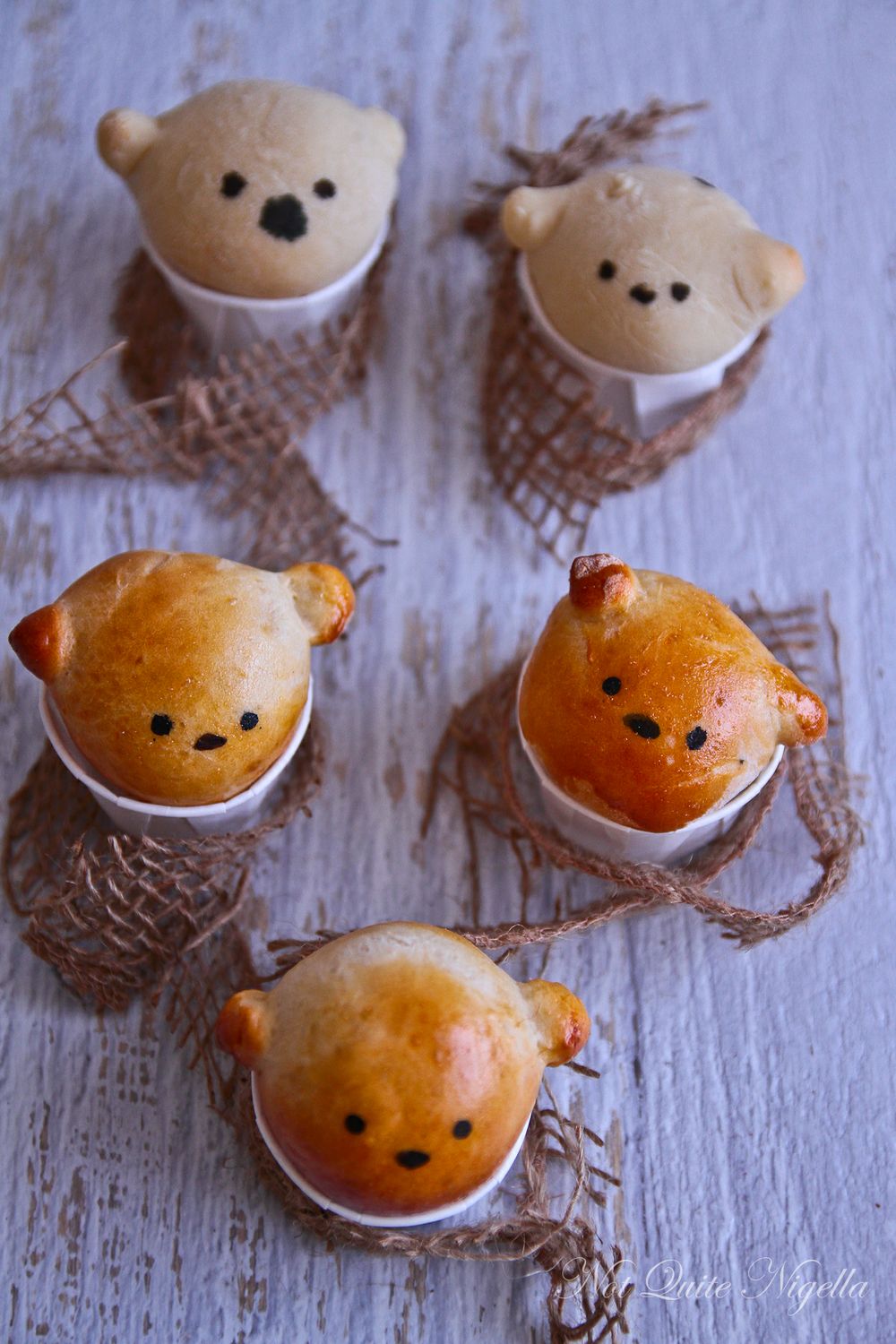 These bread bears were first seen on the Japanese site Happy Rainbow and since then they've popped up all over Pinterest which is where I found them. They are actually no harder than making actual bread from scratch, instead all you do is shape them into a ball and add ears and pop them into a cup. The buns themselves are really quite good, I promise you it's not just a novelty and Mr NQN happily enjoyed bear shaped buns for lunch for a whole week. If I had children or had to feed children, I'd pop them in a cup filled with some tasty dip or spread and they could dip the bread into that. Just don't make it that lurid orange sweet and sour sauce ;)

So tell me Dear Reader, what was your reward food when young? And what do you think of Pinterest? Have you found anything interesting on it?

Step 1 - In the bowl of an electric mixer fitted with a dough hook, mix the flour, yeast and water together. It will be quite shaggy and look like a bit of a mess but allow to sit for 10 minutes. 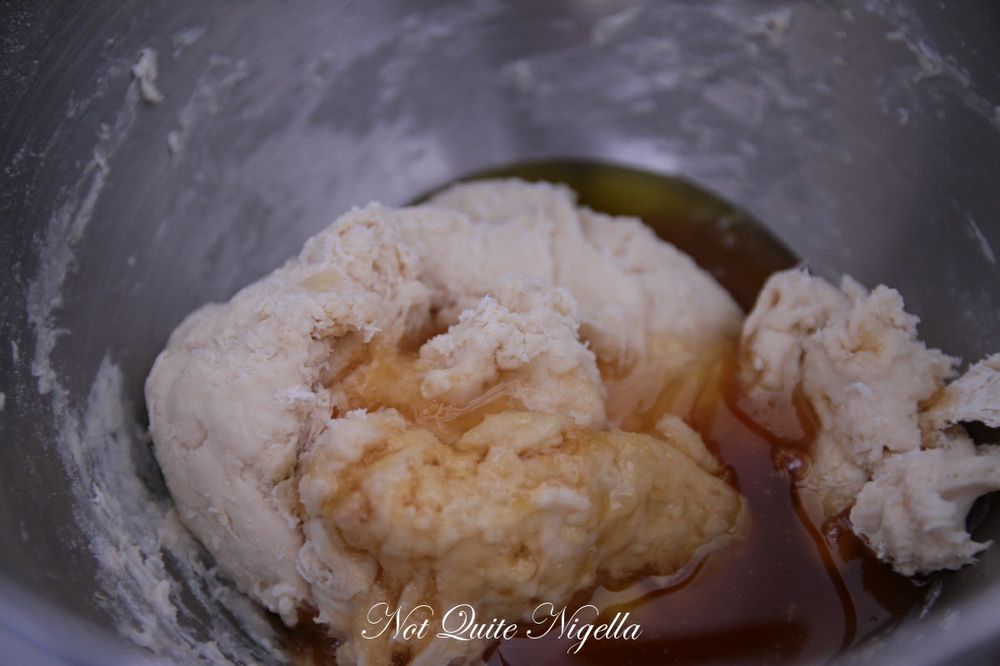 Step 2 - Then add the honey and oil and knead for about 4-5 minutes if using a mixer, or 8-9 minutes by hand until the dough becomes elastic. 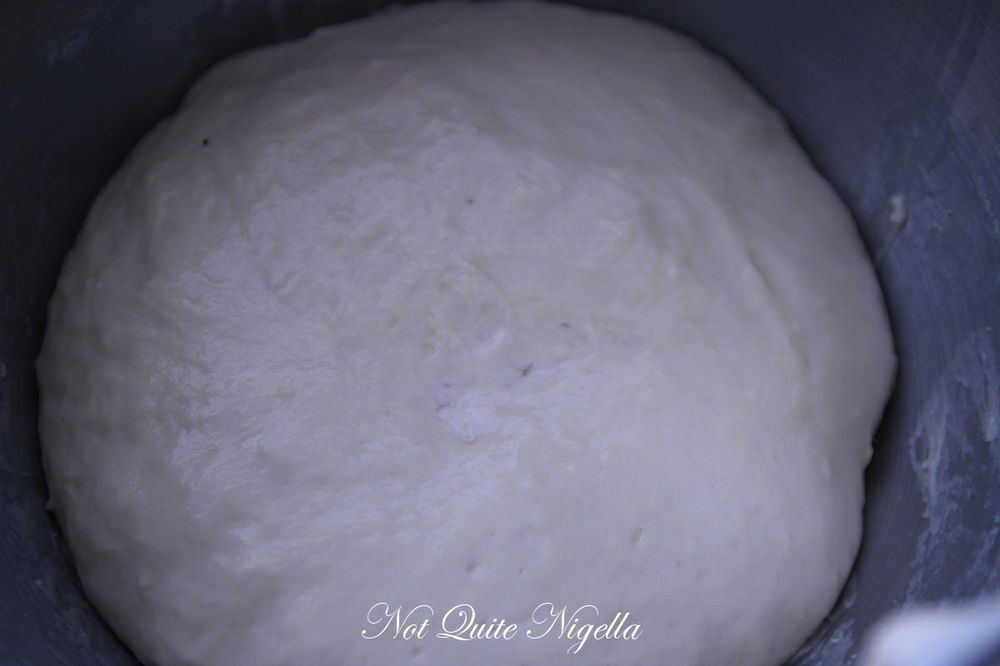 Step 3 - Shape into a ball and cover with cling wrap and sit in a draught free place for 30-45 minutes until risen and double in size. Punch down and knead for a minute. Line a baking tray with parchment and preheat oven to 180C/350F.

Step 4 - Shape the dough into small balls-be careful to not use too much flour or the ears will not stick onto the heads. I made them in a variety of sizes. Pinch small pieces of dough for ears and affix to the side of each head. Allow to rise for about 20 minutes or so. 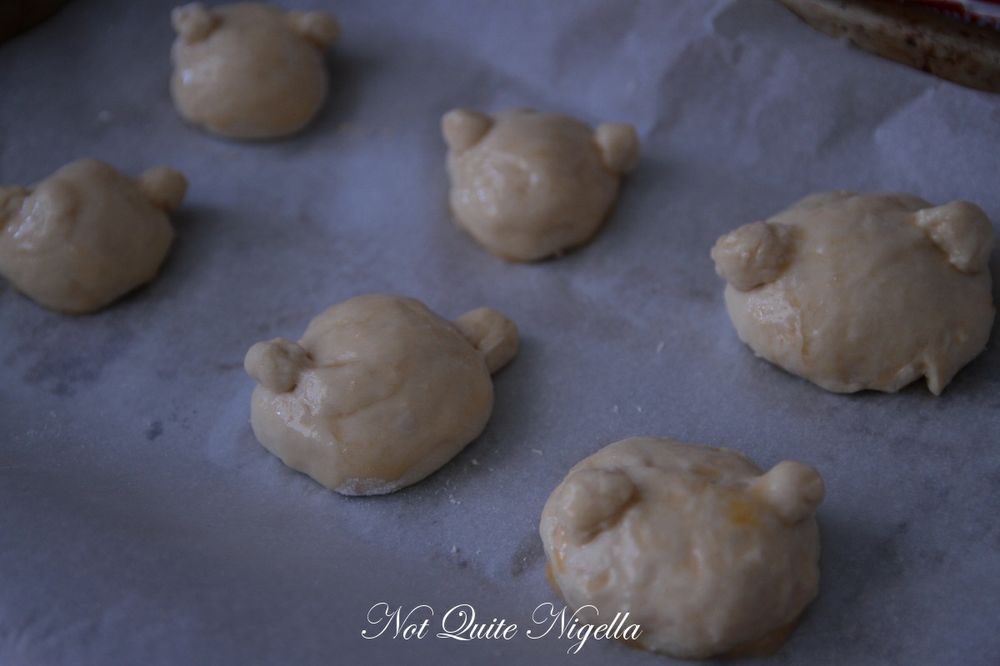 Step 5 - For brown bears, glaze with a beaten egg-be sure to try and glaze quite evenly as they will be patchy in colour otherwise (a couple of mine were-be sure to get under the "chin" of the bear). If you want the pale bears, leave them unglazed. Bake for 10-15 minutes. 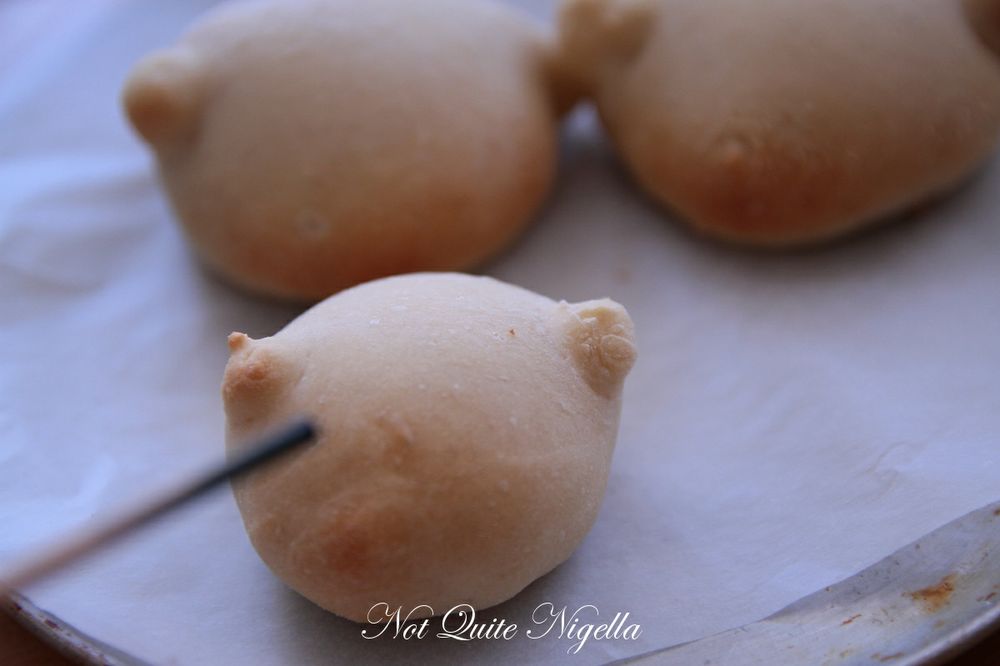 Step 6 - To decorate, I added some black food colouring to a small amount of water and used the end of a wooden skewer for the eyes and nose. You can also use an black pen with edible ink to draw these on.