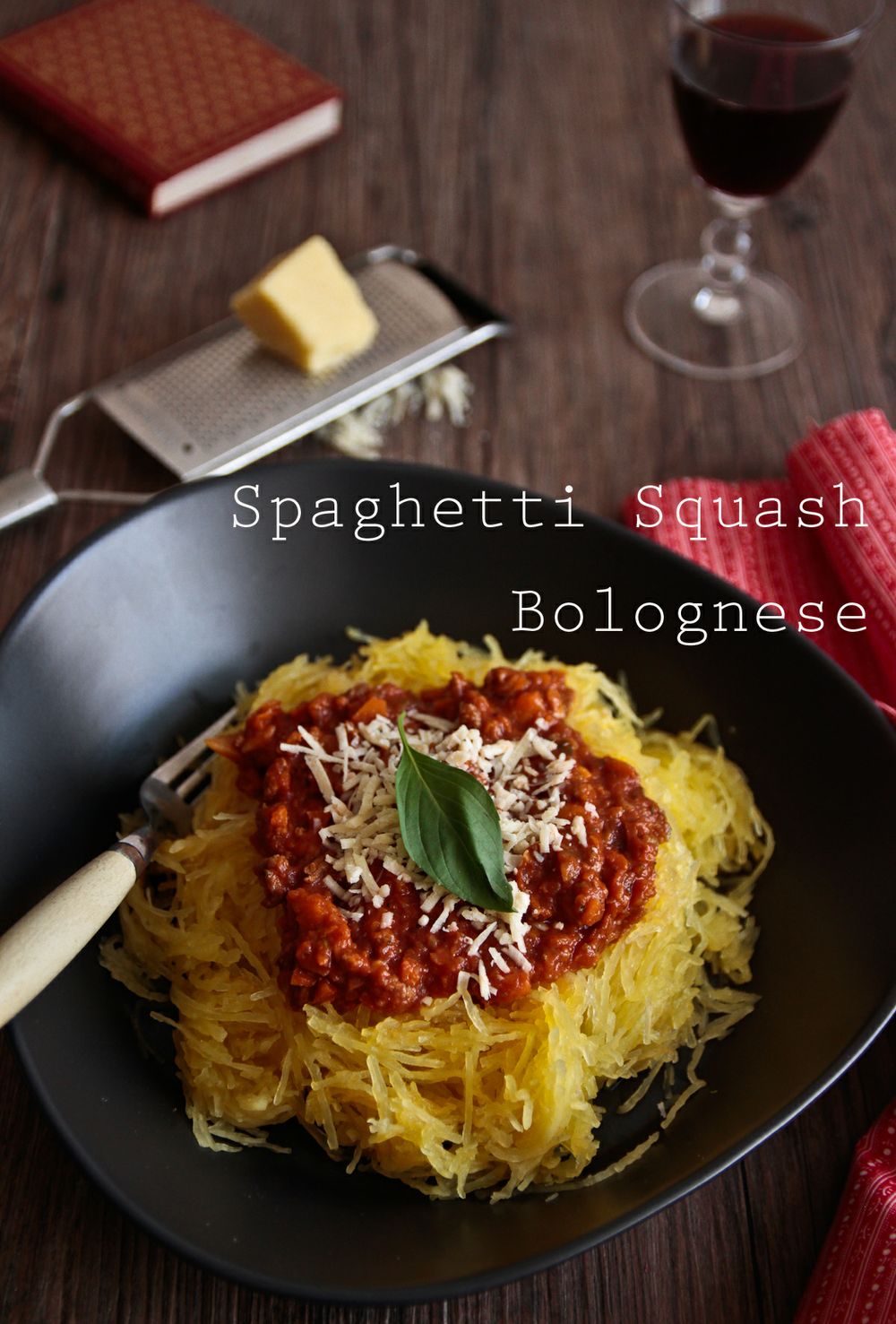 I was recently chatting to travel writer and music historian Glenn A. Baker. The subject of Australian musicians came up and we got onto the topic of the band Men At Work who came up with the 80's anthem Down Under-perhaps you remember that? They had had some success overseas and he told me that that the singer Colin Hay told him that there was a difference in attitude between Americans and Australians.

Colin used an example of getting in a queue outside a club as he had experienced it first hand. If you happen to be famous in America and join a night club queue, American queuers will tell you to go up to the front because you're famous and you've earned it. But in Australia, if you try and jump the queue, I think most Aussies would know that you would probably get told off by more than one person for the same behaviour and someone would probably say something about you being up yourself. He had experienced this first hand apparently! 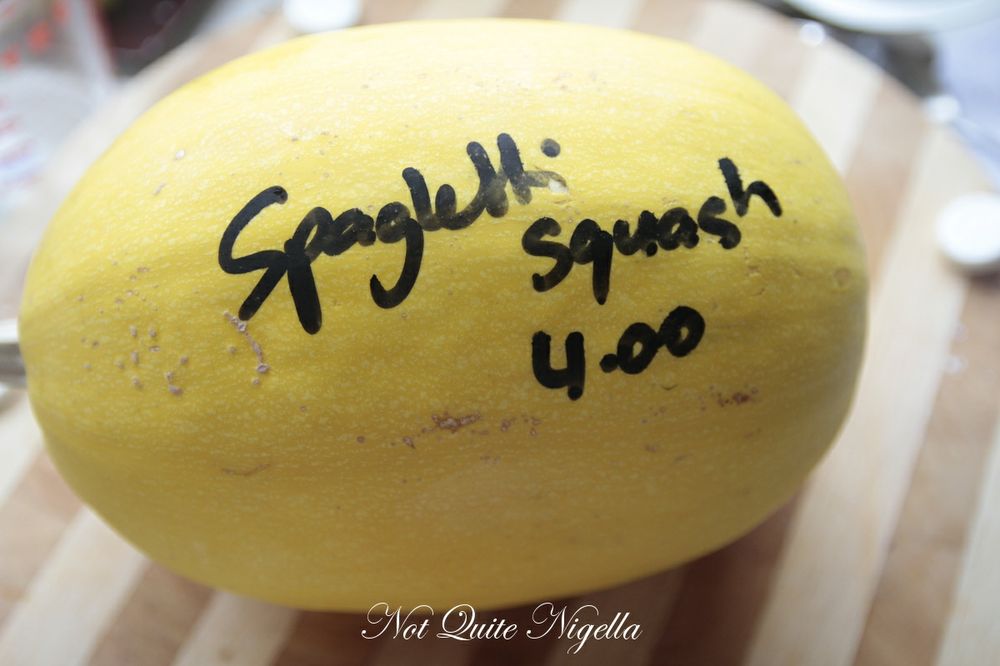 What's this got to do with spaghetti squash? Well people have two types of reactions to this vegetable-for some it's a brilliant substitute for pasta, for others, it tastes just like ...well squash. I've gotten a little ahead of myself and I should really introduce you to the spaghetti squash first. I had first seen this on American blogs (along with kale chips) and it was touted as a great way to eat spaghetti without incurring the calories and carbs of pasta. It's a curious yellow creature, best eaten when bright yellow in colour. It is long rather than round and inside it has tendrils curling around the squash in a circular pattern. To cook it, you can either bake it in the oven or microwave it. After that you take to it with two forks separating the strands which at first look like yellow uncooked rice vermicelli strands and serve it with your favourite sauce.

A lot of people are curious about it here and what it tastes like. Well it tastes like squash so if you don't like squash, I don't think that you will like it. It actually doesn't taste like spaghetti at all but it has strands somewhat like spaghetti. But it is very filling and if you like the taste of squash, it might be a good substitute if you are eating low carb. I paired this with my bolognese sauce, one that I've been making for the longest time. This time, I wanted to make the sauce a bit healthier so I omitted the bacon and added more vegetables and used extra lean mince. The rich flavour is from the red wine, bay leaves and tomato paste and the sauce cooks down to a rich, thick sauce relatively quickly.

So tell me Dear Reader, what would you do if you saw a celebrity queuing? Suggest the head of the queue or should they queue like everyone else? And have you ever tried spaghetti squash? If you could invent a low calorie substitute for anything, what would it be? 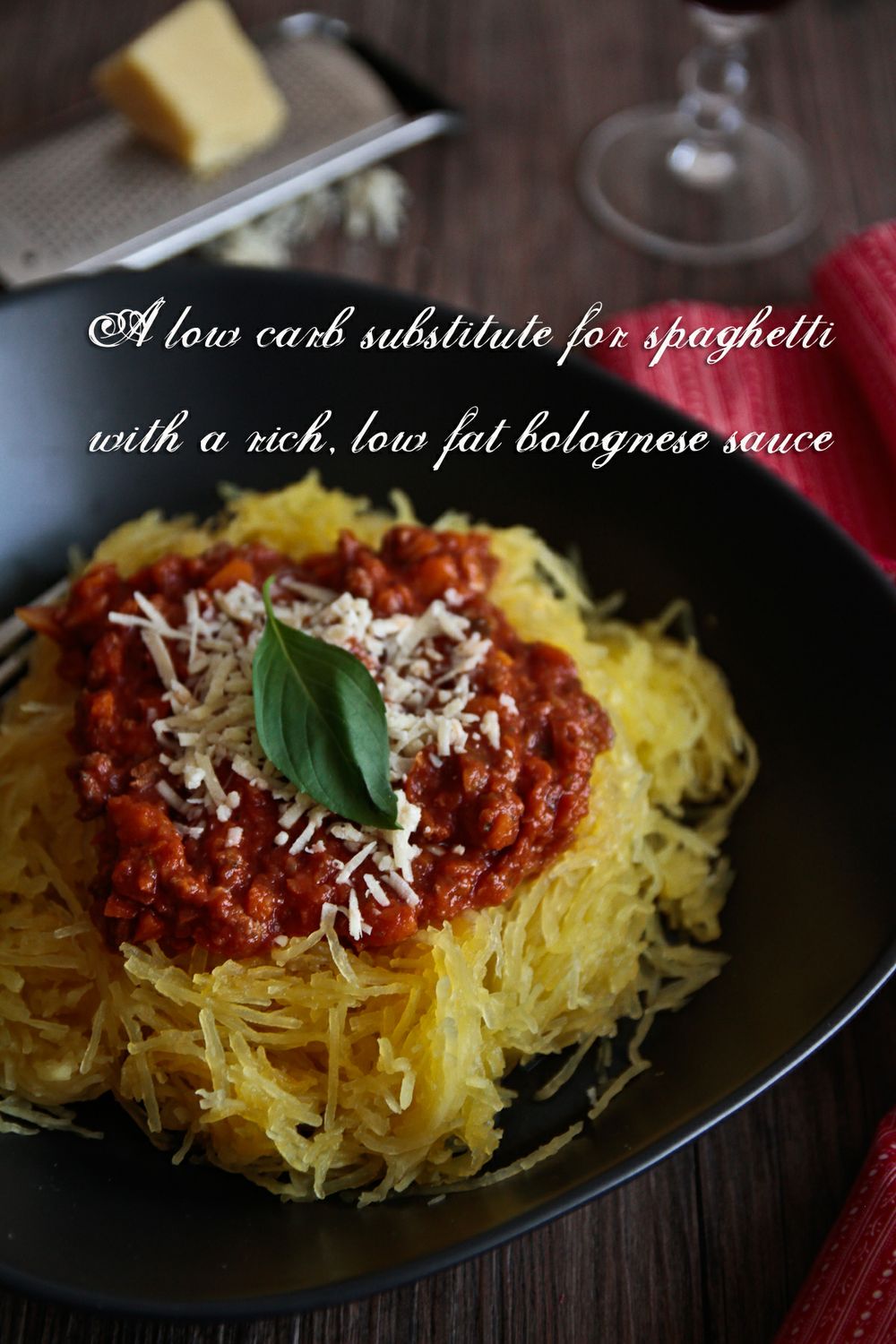 Serves 4-6 (there's enough sauce to serve six to eight people but this recipe depends on how big a spaghetti squash you use). I reserve the extra bolognese sauce to use in a lasagne.

Step 1 - Saute the onion and garlic on medium heat in olive oil. Turn the heat to medium high heat and brown the mince, breaking it up. 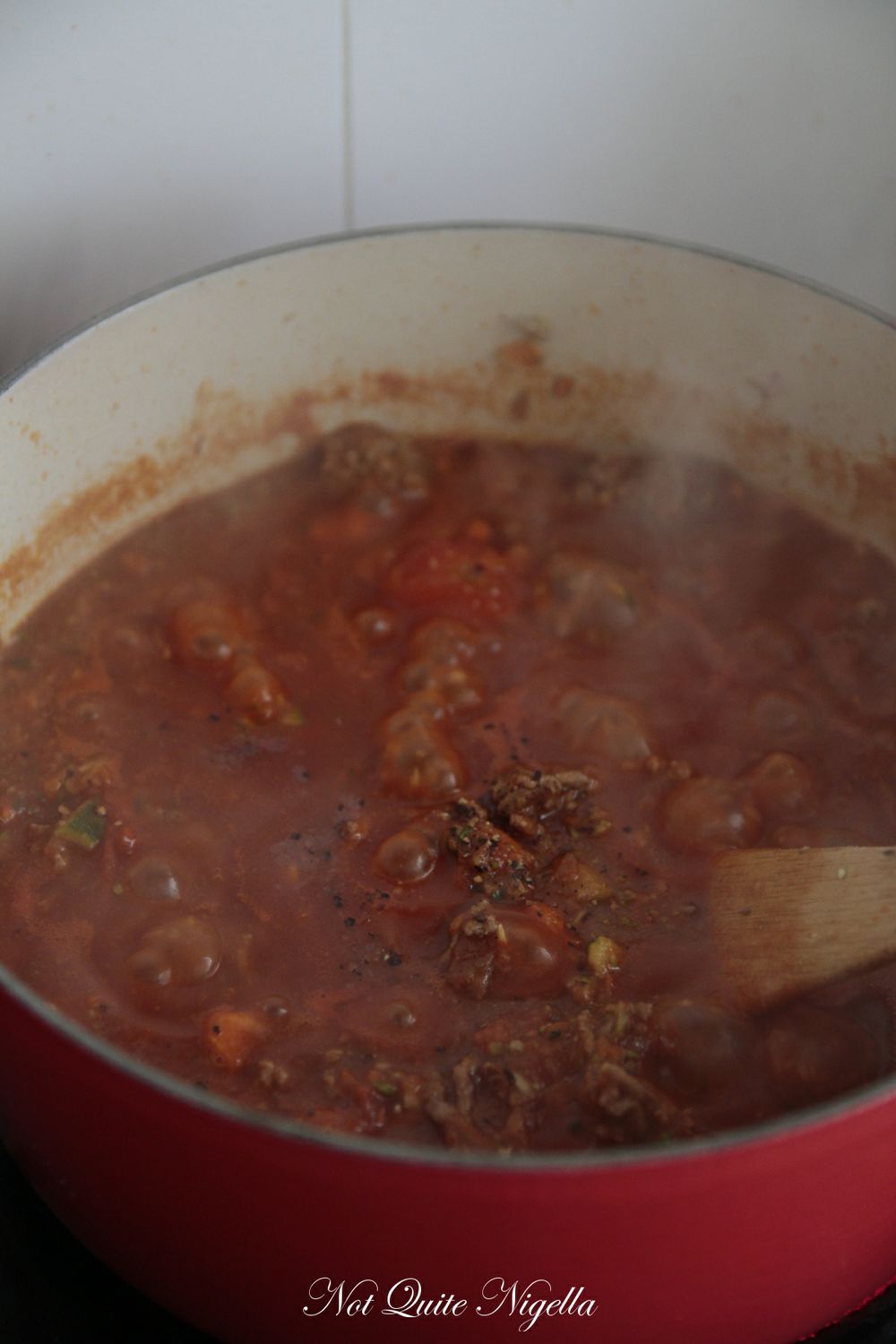 Step 2 - Add the carrots and zucchini and tomato passata, tomato paste, red wine and bay leaves and simmer for about 15-20 minutes with the lid on until the flavour intensifies and the raw carrot taste has disappeared. 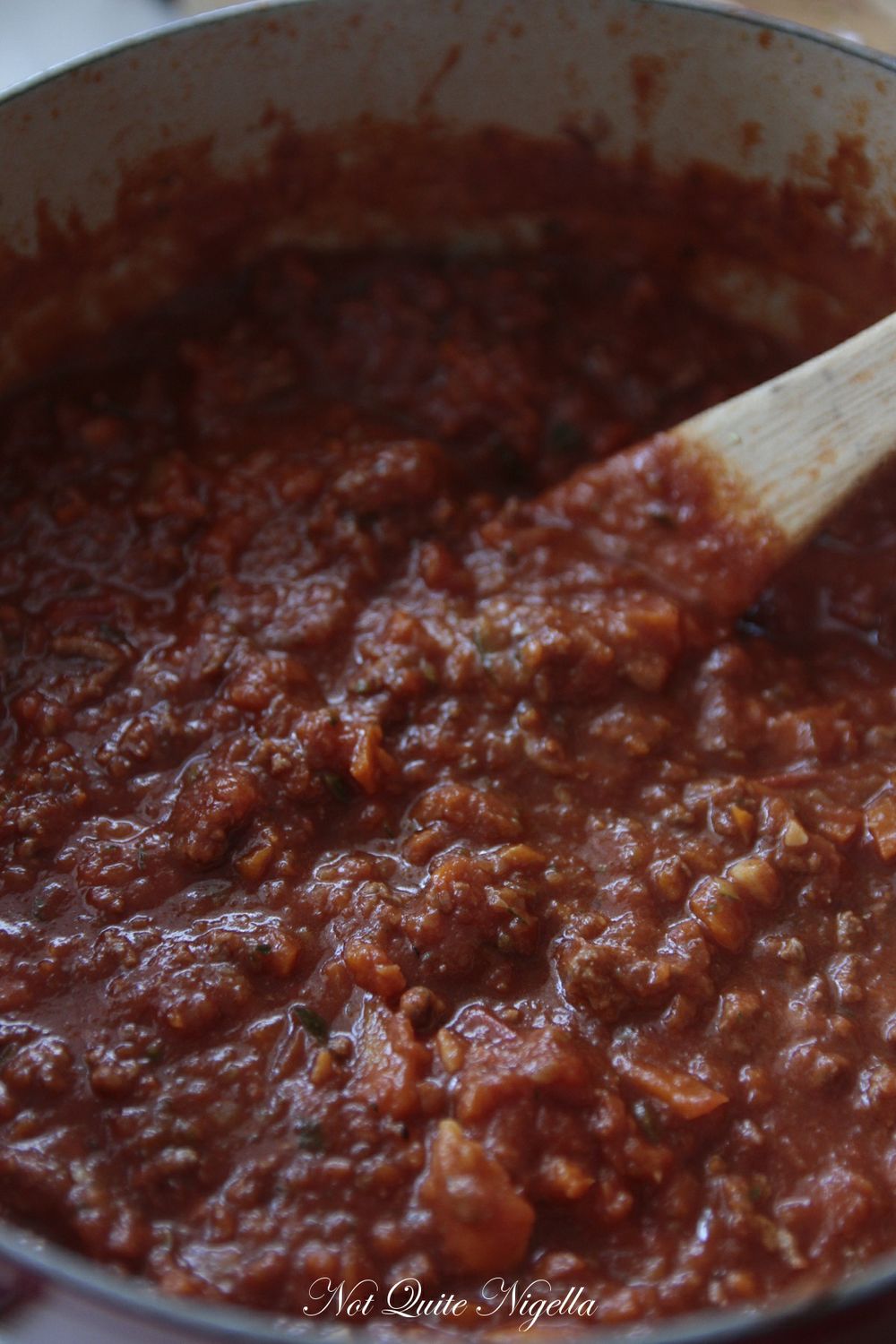 Step 3 - Season with sugar, salt and pepper. Remove from heat and stir in milk. 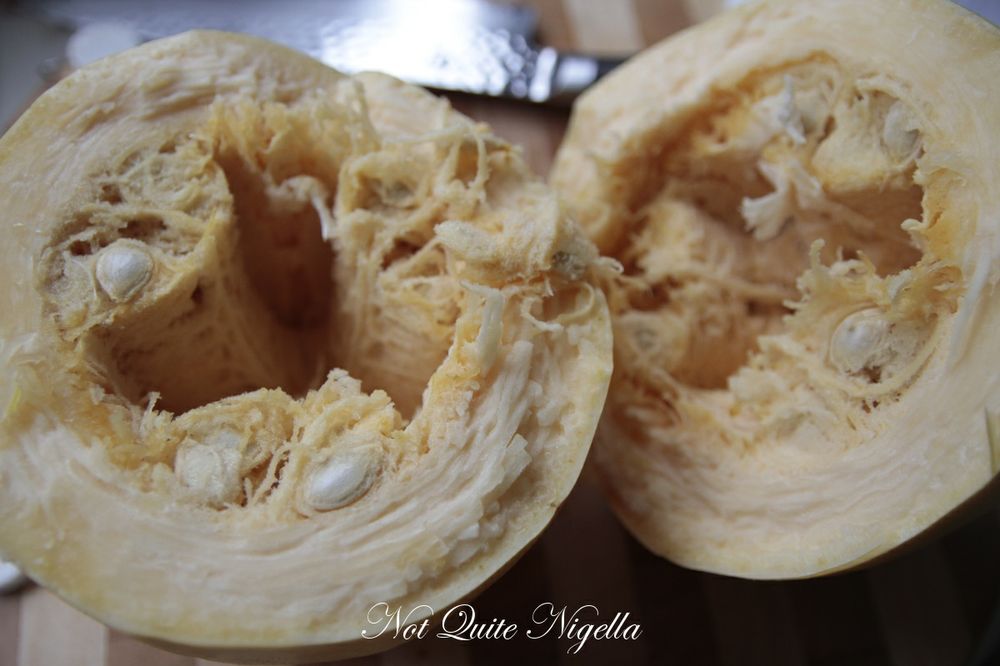 Step 4 - Prepare the spaghetti squash while this is cooking. Split the squash in half cross ways (the strands curls around the squash so this helps keeps the strands long). I find the quickest and easiest way to make this is in the microwave one half at a time. 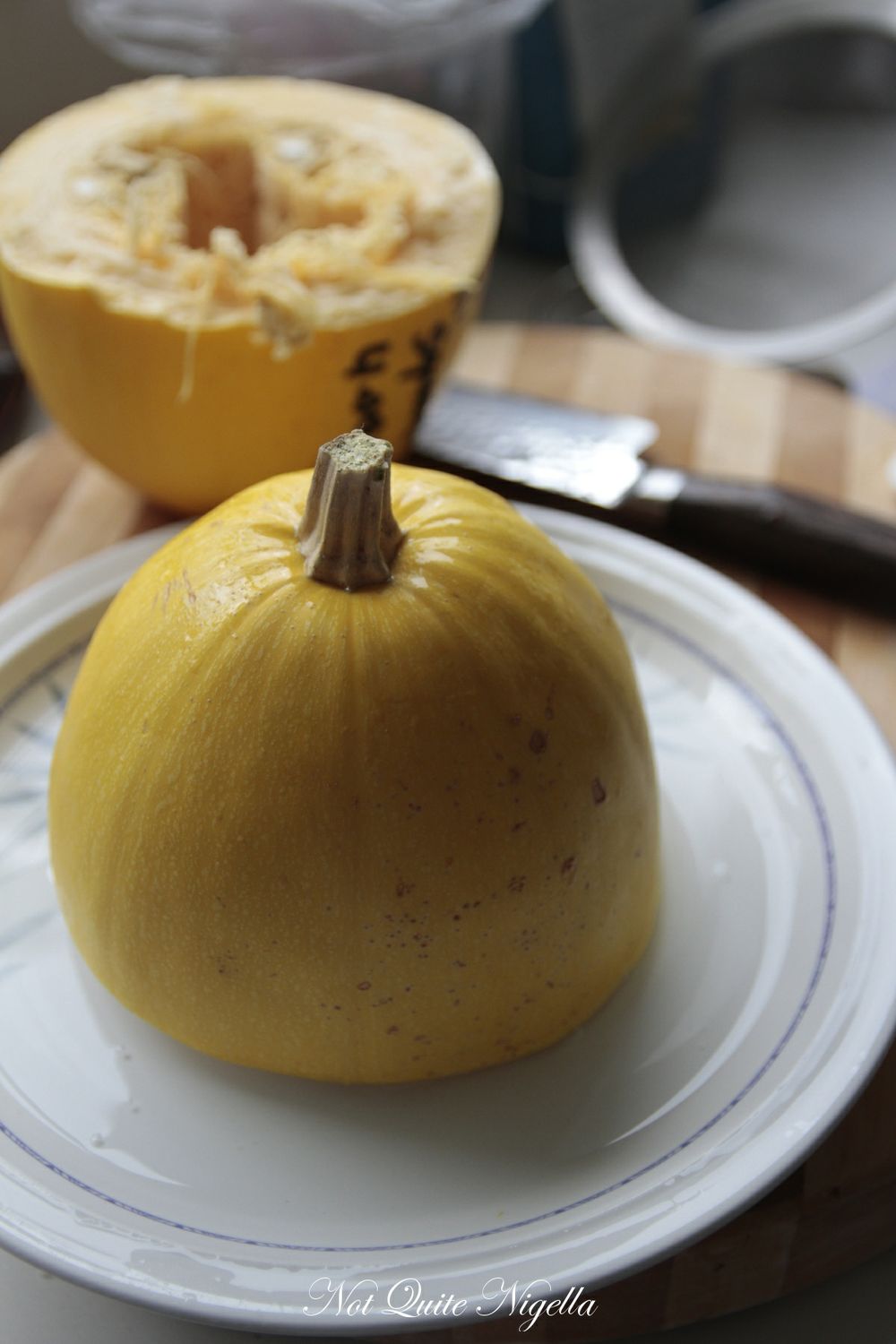 Step 5 - Place it cut side down on a plate with a rim, add about 1/2 cup of water and cover with cling wrap. Microwave on high in 5 minute bursts-to cook one half it took about 10 minutes-each microwave is different so just test out the texture of it. Also some people like this slightly undercooked so that it has a little texture rather than soft. Be careful when it comes out as it will be very hot. 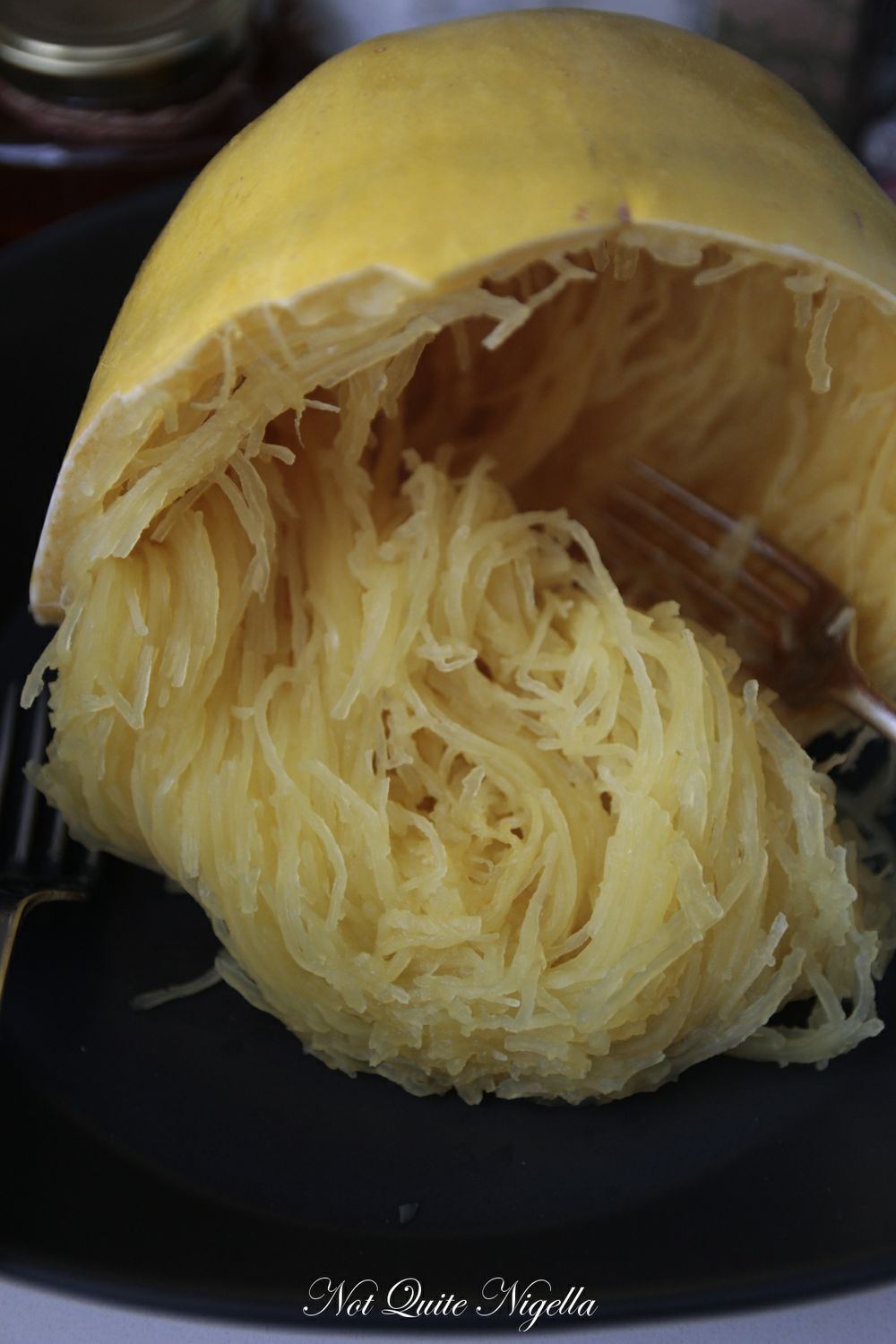 Step 6 - Scoop out the seeds and discard. Take a fork and separate the strands from the side of the squash, You should end up with a thin yellow hollow shell once you get all the spaghetti squash meat out.

Step 7 - Place the spaghetti squash on a serving plate and ladle over with the sauce. Add a generous amount of reggiano cheese on top and serve. 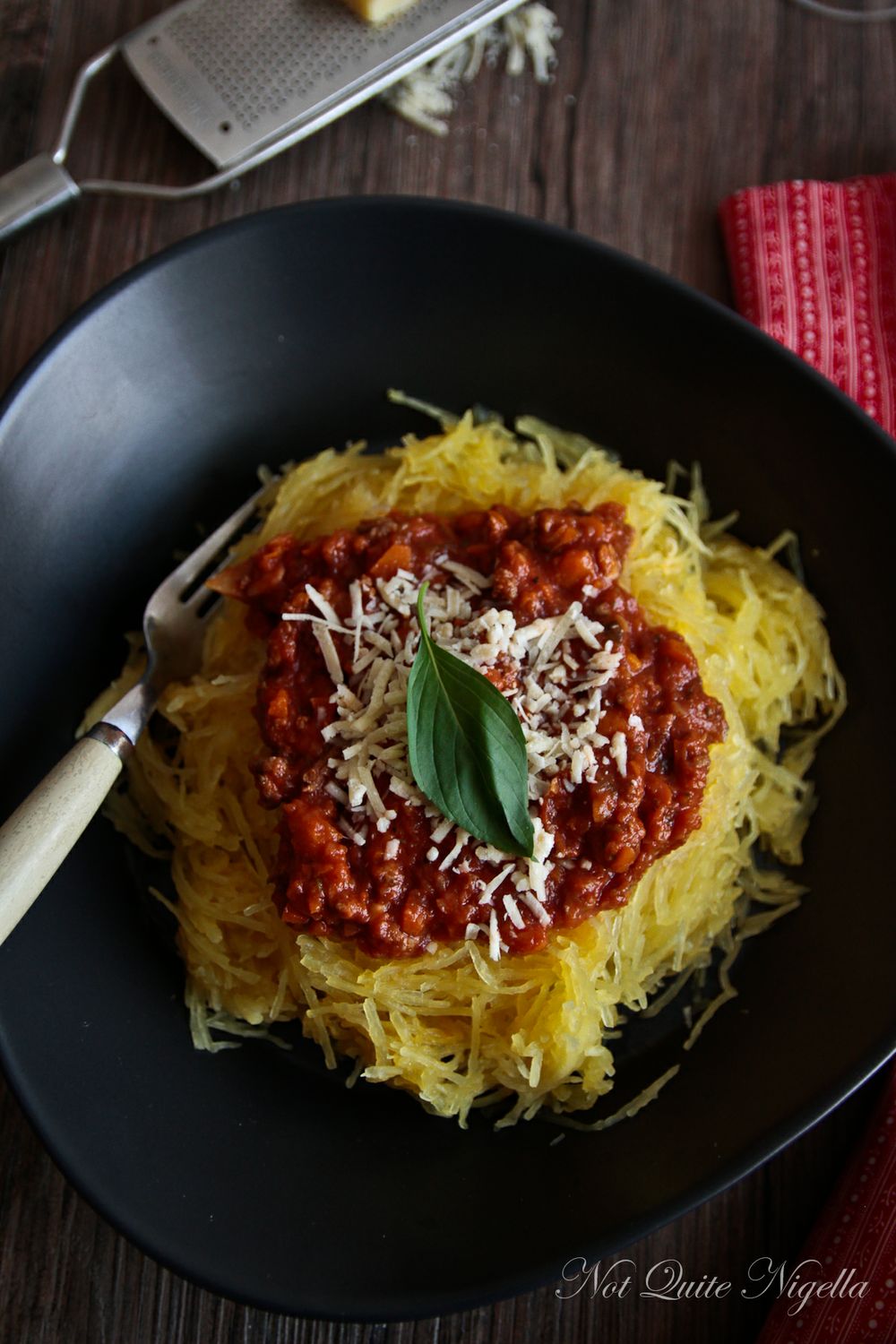