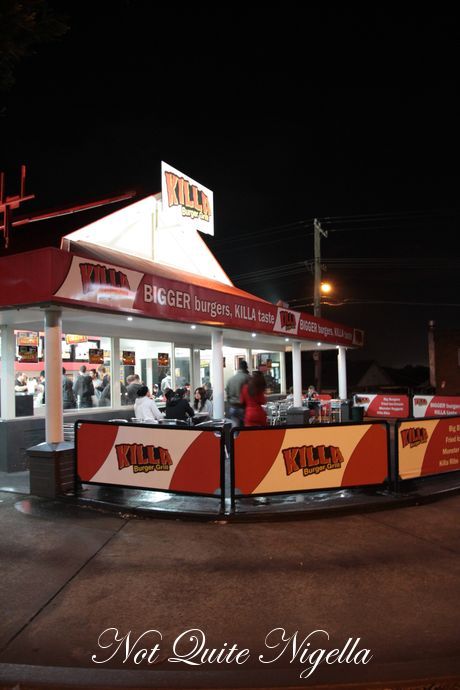 Picture this: a full moon night. The three of us have driven a distance and frost blankets the car. Shivering as we alight the car we pull our coats tightly around us. Dave whispers "I'm a bit scared and a bit excited." 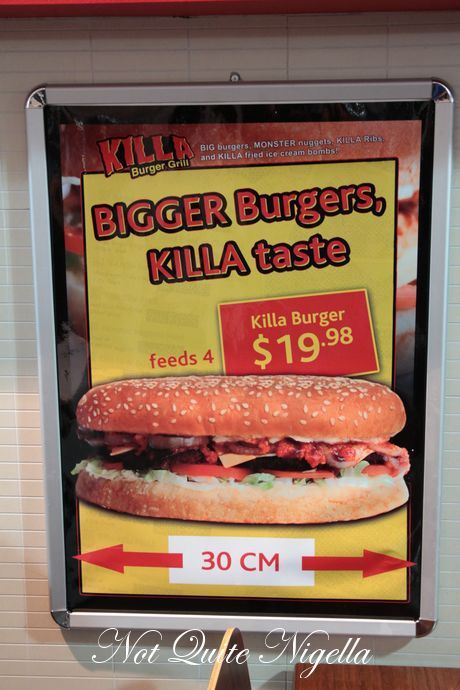 We walk through the doors and see the "cage" to our right. Blood drips down from each post suggesting that many have been impaled in their efforts to meet the killer. And what is the killer? Well it's not your ordinary monster, but a 30 cm or 12 inch diameter burger. How do you slay it? Well the challenge is to eat this 30cm burger along with a box of chips with gravy, a 1.25 litre bottle of drink and a large tub of soft serve. Of course this is after signing a release form essentially saying that its your own damn fault if you feel sick or have health problems afterwards. 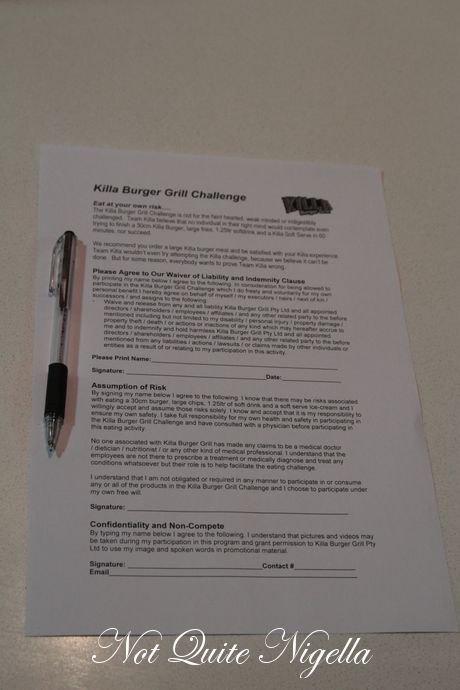 Over 4,000 people have tried to slay the Killa challenge and of that number only a mere 22 have succeeded. There is no prize but instead there is your name up in lights along with the time taken to consume the beast. Perusing the chart we see one brave soul has taken as little as an incredible 23 minutes to finish their burger challenge although many take almost the whole hour at 58 minutes. And they're all boys, no girls have done this. They tell us that about a dozen people a day try the challenge and we watch two very young boys with Justin Bieber like builds try to conquer it (sadly to no avail). 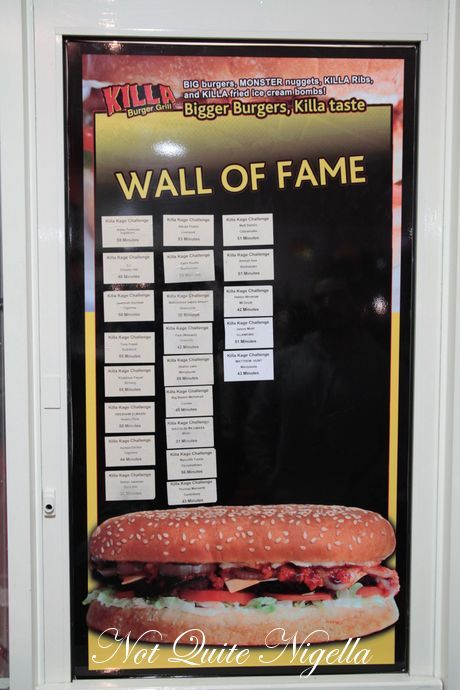 Dave was inspired by Takeru Kobayashi, the world eating champion who recently downed 69 hot dogs with buns on the rooftop of a Manhattan bar. From what we had seen, Kobayashi's technique is to not only eat quickly of course but also dunk the food in water to help force it down. We assess the challenge. Each burger is 1.6 kilos with 800grams of meat and you can choose any burger you want. Swallowing gamely Mr NQN and Dave decide to give it a go. Mr NQN goes for the chicken while Dave goes for the "Smack burger". I go for a more modest but still slightly alarming meal-the booty burger which has a beef patty, coleslaw and chips already on it-this presumably helps one put on a booty worthy of a Kardashian. 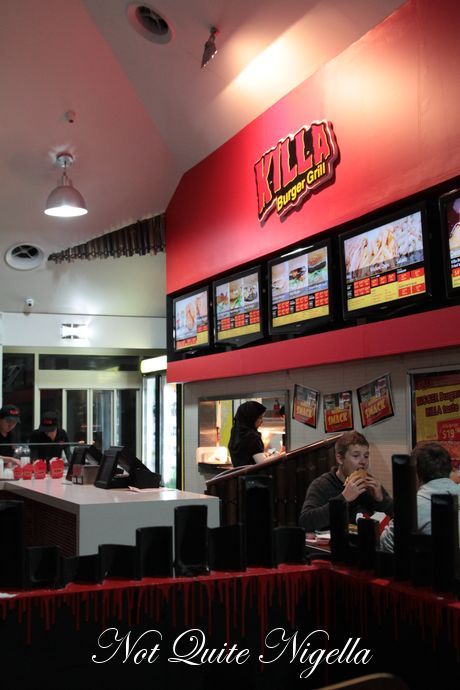 The sauce selection has a few more offerings than most. I like having my fries with gravy and on the drive here we were waxing lyrical about pepper sauce and mushroom gravy on fries. I choose the Killa special sauce, Mr NQN the pepper sauce and Dave the mushroom sauce. The price for the challenge meal is $29 while mine is a more modest and less dangerous $7.20. 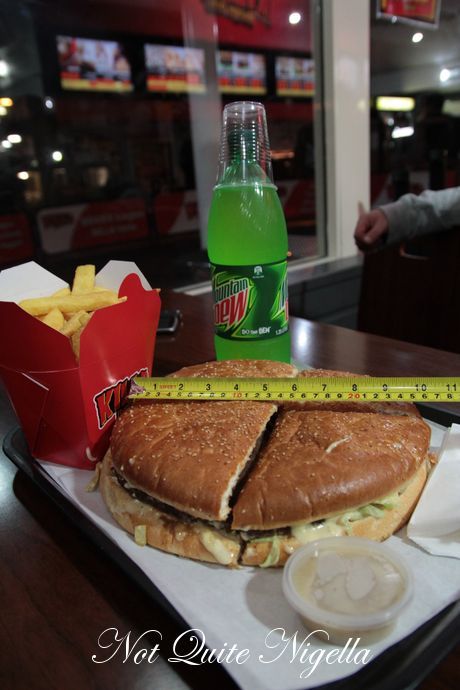 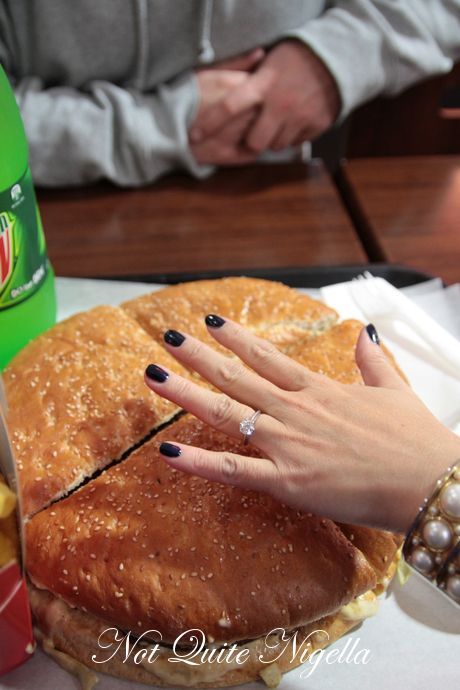 We take a seat in the cage and await our order. "You take me to the best places" Dave says clocking the faux blood drippings, the slightly sticky floor with squashed chips, detritus from the many other customers that have tried and failed. We're not waiting long. They bring Dave's first and ask if they would like to start together. 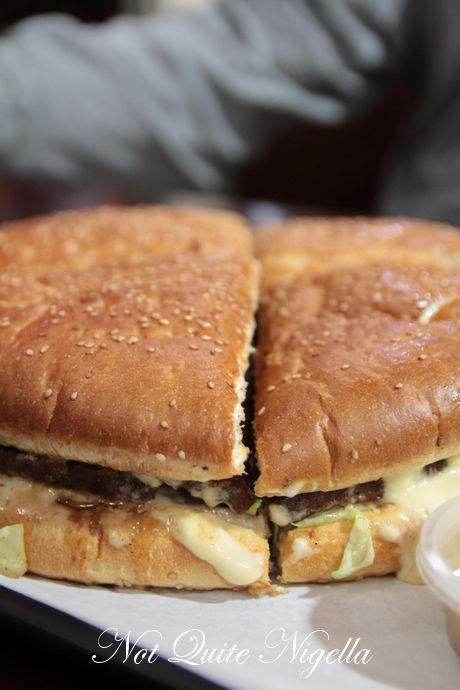 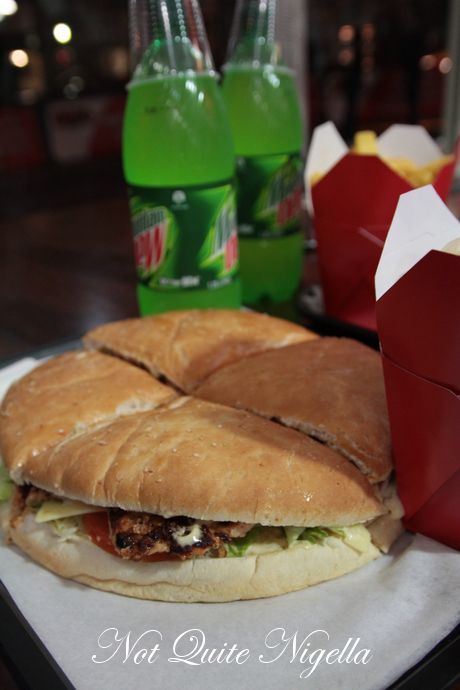 A few minutes later Mr NQN's order arrives. They've both lucked out slightly saving in diameter as the measuring tape shows a 26cm burger diameter. The staff write down their start time and show it on a mobile phone. I can sit there with them but I'm not supposed to help them. I've got my own burger to contend with actually. 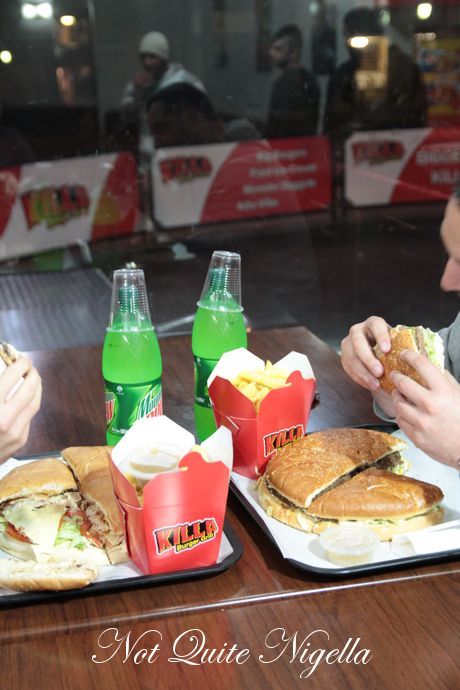 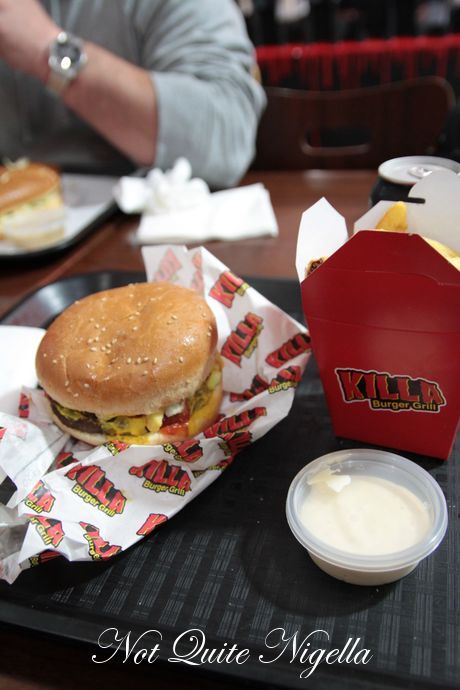 I was asked if I wanted a regular or large burger and my answer was an unequivocal "regular please". I was there to lend moral support and to photograph Mr NQN and Dave's adventures.  My booty burger is modest sized, looking even more dwarfed when I compare the size to the 30cm burgers. There is tomato ketchup, mustard, coleslaw, chips and a beef patty. 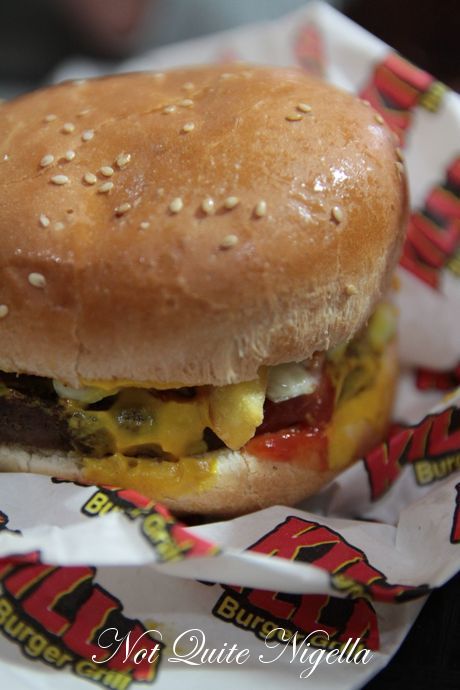 The bun is soft but the ratios aren't quite right as the beef patty is too thin for the bread and the quality of the beef isn't anything to write home about.  I take off the whole top of the bun and try eating it with just one bun. Mr NQN seems to be doing better with his chicken which is chicken breast and I think for a filling that would be better than the beef. Perhaps I'm spoilt, I've had many excellent wagyu and really beef burgers so the patty is disappointing. 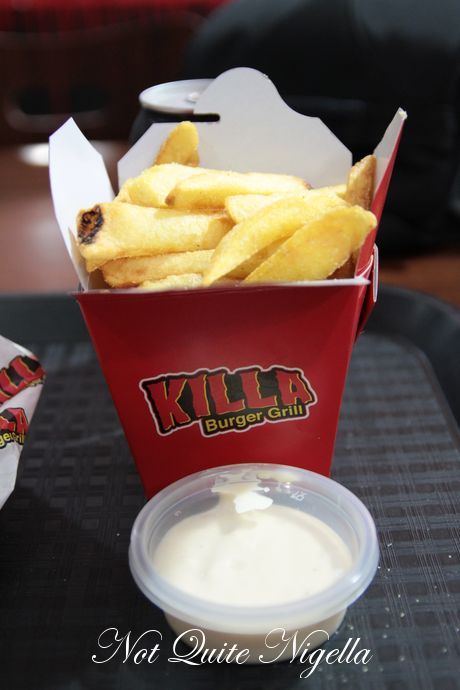 The chips are fat, crunchy and liberally salted with that most umami of seasonings, chicken salt. I have mine with the special killa sauce which is like a tangy mayonnaise, not unlike Big Mac sauce. The chips are moreish especially as the burger didn't do much for me. I steal a bit of Dave's mushroom sauce which is peculiar, there's not much mushroom in it and it is quite sweet. Mr NQN's pepper sauce is better as it tastes like ground black pepper. 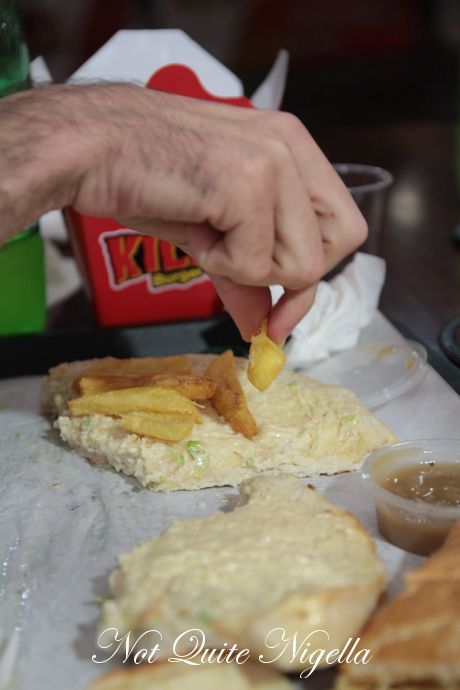 But enough about me and my burger meal. We are fifteen minutes into the challenge and Mr NQN and Dave are going full force into their burgers. They've both quickly polished off their first quarter and are now slowing down into their second quarter. Mr NQN's tactic is to ditch the bread and eat the filling. Both aren't big fans of the bun which is out of proportion with the filling. They try all sorts of tactics . One of Mr NQN's was stuffing the burger with some chips because there is a large serve of chips to demolish along with a 1.25 litre bottle of drink (I suggested a diet drink and got a "look"). 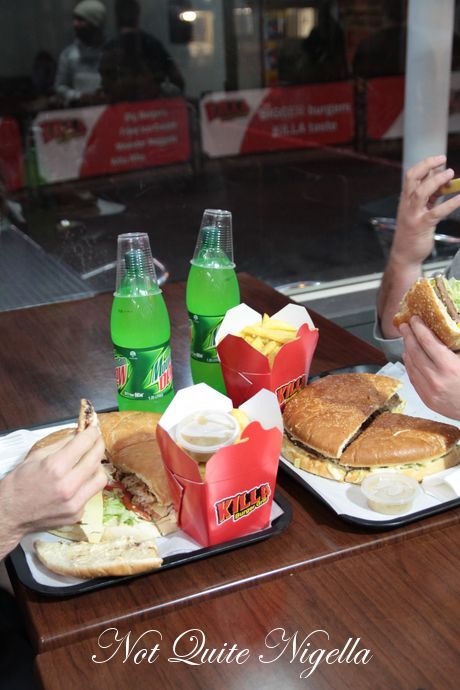 It is now about twenty five minutes into the challenge and Dave gives up halfway through his third quarter. He tells us that he would have had more luck if the burger weren't so much quantity over quality and says that he would perhaps have a better chance if the burger were better and Mr NQN agrees and says that if the proportion of filling to  bun was better he would too. Mr NQN surveys his tray and there's just bread left. He tried using Kobayashi's tip of soaking it in water or in this case Mountain Dew which he pronounced "yummy" although I think he was being sarcastic.

About a few minutes rest we are now 40 minutes into the challenge and they look like they may ready to resume eating. "Don't forget about the dessert" I tell them. A look of utter horror crosses both of their faces! 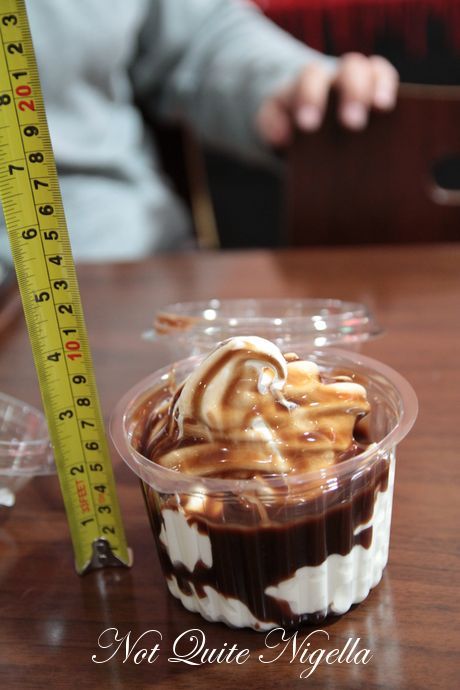 They bring over two huge tubs of soft serve ice cream. Mr NQN chooses caramel topping and Dave chooses chocolate (it's a commercial Cottees or something along those lines according to Dave). They try a few bites, perhaps to give their tastebuds a bit of a break but they can't manage more than that. 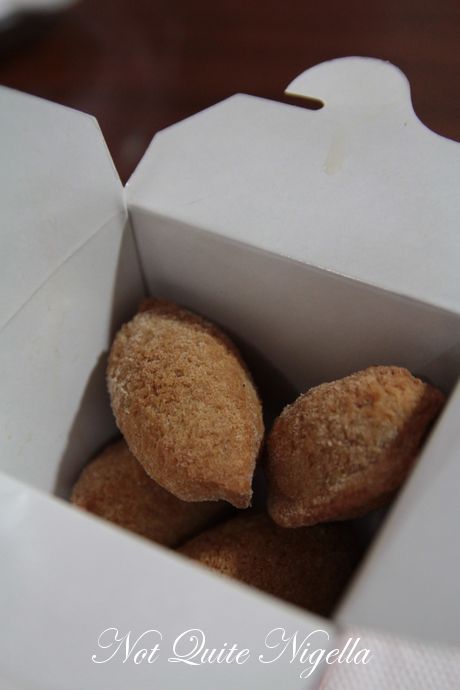 It's my dessert time so I order a small serve of apple bites. There's a reason why the average age here is about 16 and that is because the prices are very cheap. The apple bites are four deep fried apple filled morsels covered in a pie crust dusted with cinnamon and sugar. They end up being one of my favourite parts of the meal when dipped in the soft serve. 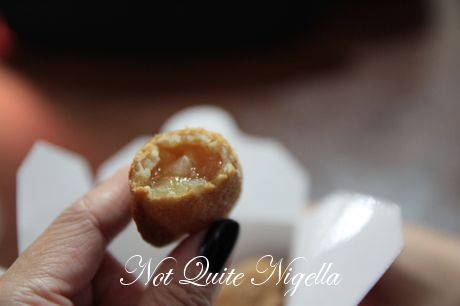 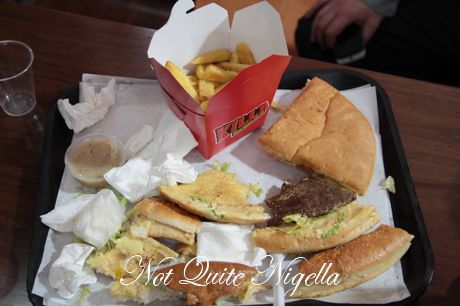 "That's it" Mr NQN and Dave say pushing the chairs away from the table. They both give up shaking their heads just as the clock strikes 60 minutes. Time is up and there's still just too much on their trays. Sadly they won't be joining the 22 punters that have already succeeded in consuming what is probably a week's worth of calories in a single meal. We look around and see some other brave or crazy  souls attempting the challenge. The two Justin Bieber sized boys have adjourned outside to get some fresh air, looking slightly dazed and nauseous. They have come just for this burger and this is their first time. And they look like they may regret having signed up for it! We also see some groups of people sharing a 30cm burger among four which is probably the more sensible option. And whilst the burgers themselves didn't end up being a drawcard for us, they do seem to be for the young crowd and by the time we leave the ordering area is packed with teenagers. 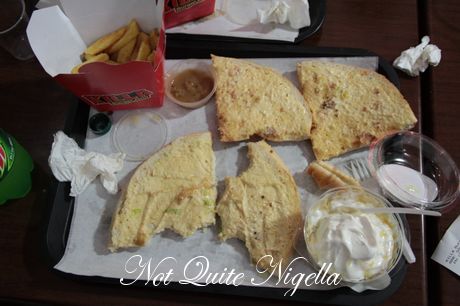 And I don't mean to be inelegant but our curiosity is peaked. I ask the girl behind the counter if anyone has how do I say...regurgitated their meal. She laughs and nods and says "Yes! yes!" and she tells us of one day where two people threw up in front of the counter on a busy day - apparently it happens a lot. The other girl rolls her eyes and shakes her head laughing at the memory. I suggest putting a clause in the contract that people need to clean up any mess that they make ;)

And were there any side effects? Well for the next few hours Mr NQN said that he "didn't feel very well" but around 11pm, about 3 hours after the notorious act he actually started to act a little like he does when he is drunk. Perhaps he was just happy but he said that he felt a little bit drunk without being drunk. But unusually enough later that evening, Dave and Mr NQN report having a nice peaceful sleep-I envisaged having to kick him out of bed to sleep on the lounge but he slept tight. And both boys report that there no there were no dreams...or nightmares involving gigantic 30 cm burgers.

So tell me Dear Reader, would you ever do this challenge or know someone that would? And what is the most you've ever eaten in one go or the food you can eat a lot of? I can eat an untold amount of baklava! :) 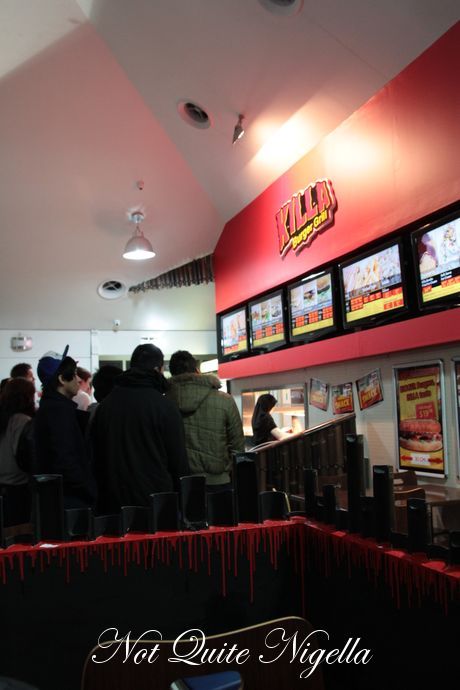