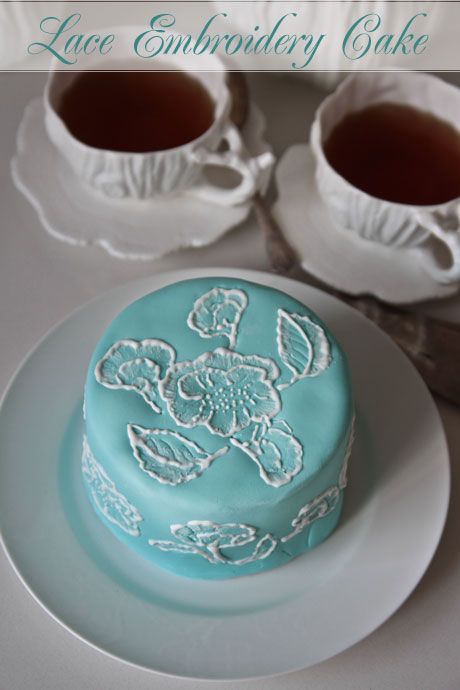 My parents will testify that I've had strange tastes ever since I was small. Even though small children are supposed to want to be like everyone else, and of course I did to an extent, I still had certain odd tastes. One example was that I didn't want a school bag that every one else had. One year I latched onto this strange bag that my mother was given. It was a large embroidered tote bag and open at the top. While everyone else had lovely hard cased school bags I decided to take this bag to school for several months for reasons that totally escape me now. I must have looked like a pint sized embroidery enthusiast or nanna. No wonder people gave me a wide berth...

For a child anything out of the ordinary from the boring school day is exciting and one day a student reported seeing a gigantic huntsman spider in the bag room adjacent to the classroom. The teacher himself was too scared to do anything about it although huntsman spiders are harmless they move very quickly and look gruesome. And so he carried on with the lesson with not a single child listening instead quivering in excitement and anticipation should the spider come round the corner. By this stage the spider had morphed in our minds into a 1 metre wide beast with glowing red eyes and hairy legs. 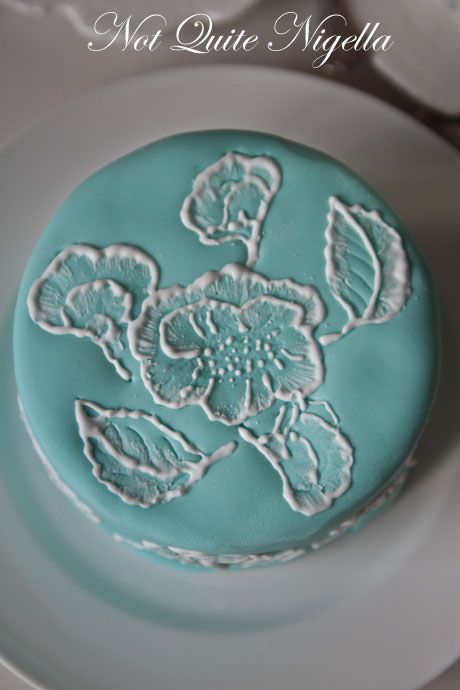 His assistant teacher kept an eye out for it from her corner of the room. Suddenly she startled in her seat and we followed her eyes follow the beast from the top of the ceiling down to the bottom before she yelled "It went into a bag!"

We all rushed up to take a look at the bag room. And of course don't you know it but she was pointing at my bag. Having this open tote bag meant that spidey had decided to seek refuge in my bag of all bags. And then she shook out my bag with the sandwich and pencils and books and all I could think was "Of course it was my bag".

What does this have to do with today's cake? Well the first thing I think about when I see embroidery is that bag and that spider. Which is unfortunate because I don't happen to love huntsman spiders but I do like this cake effect. It's a floral effect that is certainly doing the rounds on the internet and whilst it looks awfully complicated I was told in no uncertain terms that it was easy. 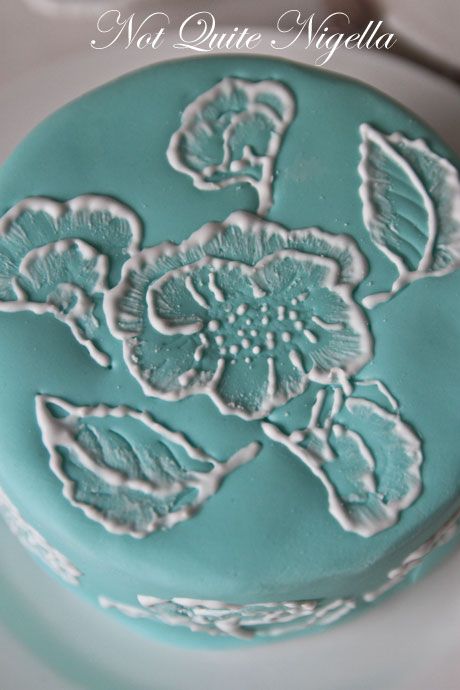 I used some of the tricks I had learnt in the Faye Cahill cake decorating class last year to do the ganache and the fondant on the outside. In fact if I hadn't found a floral stamp I would have used her clever tip of tracing a design in paper on parchment and then rubbing it against the fondant to create an imprint. But as I often do I'm lazy and took the easy route out (after ganaching a chocolate mud cake and covering it in fondant I had little energy).

The white chocolate mocha mud cake itself is wondrously moist and has the added advantage of not needing any beaters, just a saucepan where the butter and chocolate is melted. As for the embroidery pattern, I was given some tips from the man who owns An Iced Affair which is where I got the floral stamps from. Evan advised me to use a damp but not wet paintbrush and to do one flower at a time as the icing sets quickly. He also advised tracing the edge and then tracing a double line again and then dipping your paintbrush lightly in the double line and lightly pull it towards the centre of the flower.

I did a practice one and by George it worked! And it looked like a flower too! Buoyed with confidence I brushed away and more flowers appeared. And don't feel intimidated by the cake recipe instructions. You could certainly do the same for a cookie and decorate baked cookies in the same way if you don't want to pfaff about with ganache and icing. You know I'm in full support of the easy ways out of things ;)

So tell me Dear Reader, do you find that strange things happen to you or anyone that you know? 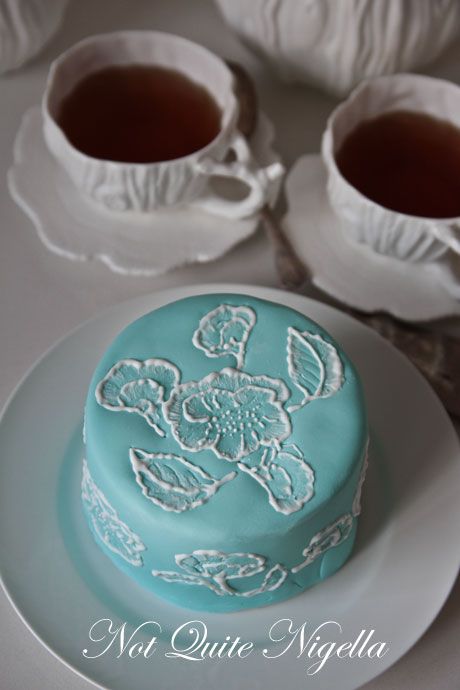 For cake-makes one small double layered cake 11cms in diameter

For the fondant and royal icing 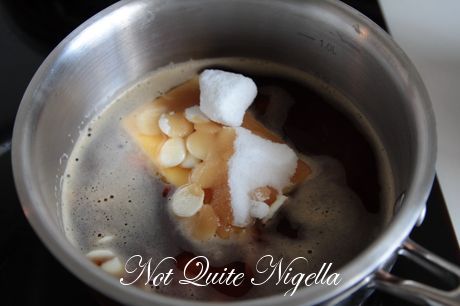 Step 1 - Make cake first. In a saucepan, place the butter, chocolate, sugar and coffee and stir until melted. Cool for 15 minutes. 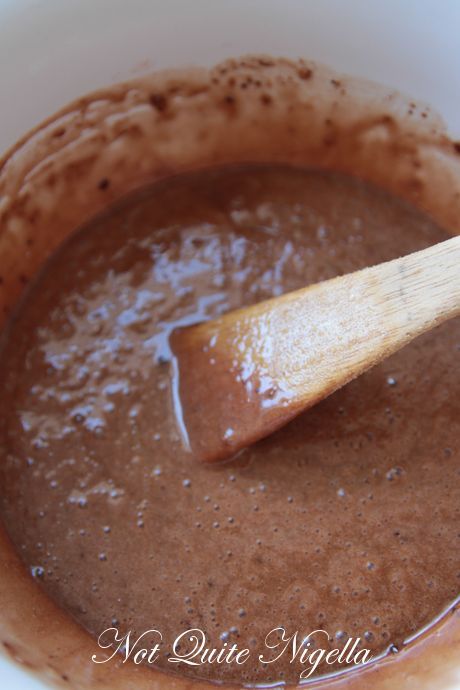 Step 2 - Preheat the oven to 150C/300F and line two small round tin 11cms in  diameter with baking parchment. In another bowl add the flour and cocoa and mix to combine (you can sift it but I loathe sifting and it's a dense cake anyway).

Step 3 - Add the cooled chocolate mix to the flour and then add the beaten eggs and stir until well combined. Pour into the tins and bake for 1 hour or 1 hour 15 minutes until a skewer inserted comes out clean. Allow to cool and refrigerate until needed just to make it a bit firmer.

Step 4 - Make the chocolate ganache. Combine chocolate and cream in a small heatproof bowl; stir with metal spoon over pan of simmering water until melted and smooth. Cool in fridge a little until it reaches a spreadable consistency. Spread the ganache all over the cake and with a palette knife smooth it. The best instructions I have for this are in this story and they go into a lot of detail. 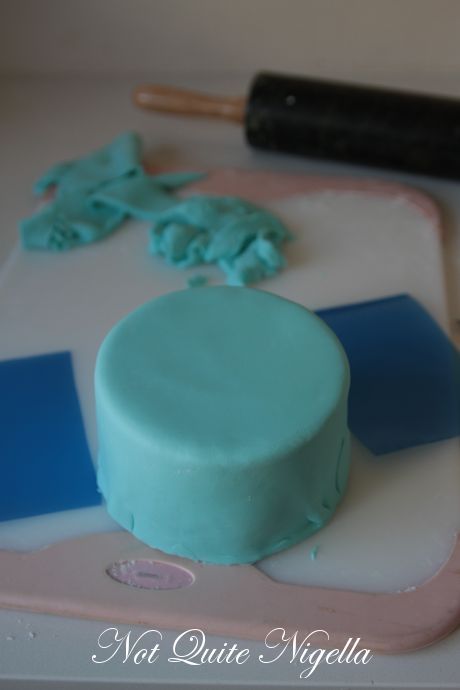 Step 5 - Colour the fondant icing the colour that you want-a contrasting colour will show up the floral detail the best. Roll it out onto a lightly cornfloured board and drape the cake in the rolled fondant. You can typically use a smooth jam to adhere the fondant to the cake but this cake was so moist I didn't need to. Smooth down the fondant using two rectangles of the overhead transparency film. This will take some time and you will have to snip off some excess fondant but gently rubbing it with the film will eventually get rid of any lines. Take the imprint and gently press down firmly to ensure that the imprint appears on the fondant. 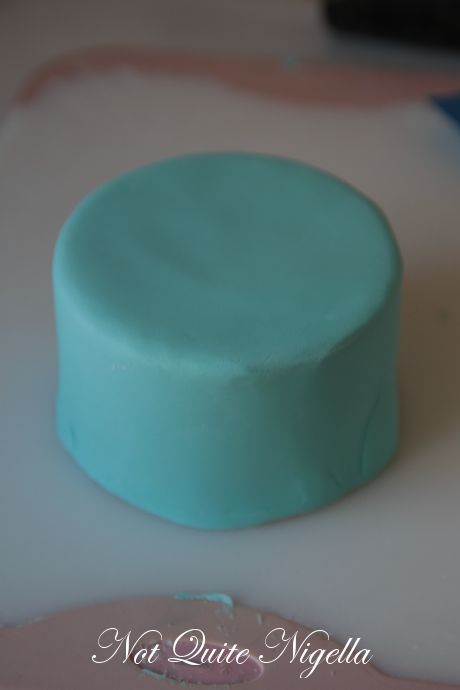 Step 6 - Make the royal icing. I do it a very quick way in my cordless Braun mini blender. I place the unsifted icing sugar in the container and blitz this for about 20 seconds until the lumps are gone. Then I add the egg whites and lemon juice and then blitz it again until it is smooth. I check the consistency by drawing a line and if it holds well without blurring then it is ready. If it is too stiff add a few drops of water, if it is too soft, then add some more icing sugar to achieve the consistency. Then fill a small piping bag with the royal icing (I usually make a small cone using a square of parchment). 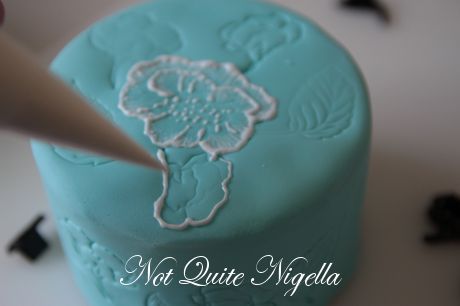 Do two outlines in the royal icing 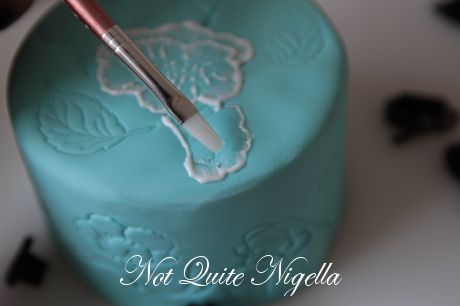 Then drag your paintbrush towards the centre

Step 7 - Have a glass with a small amount of water and a clean teatowel ready. Dip your brush into the water and blot on the teatowel so that it remains damp. Trace around a flower twice and then using the damp paintbrush lightly drag the brush from the line to the centre of the flower. Repeat this doing each flower individually as the royal icing sets quickly. 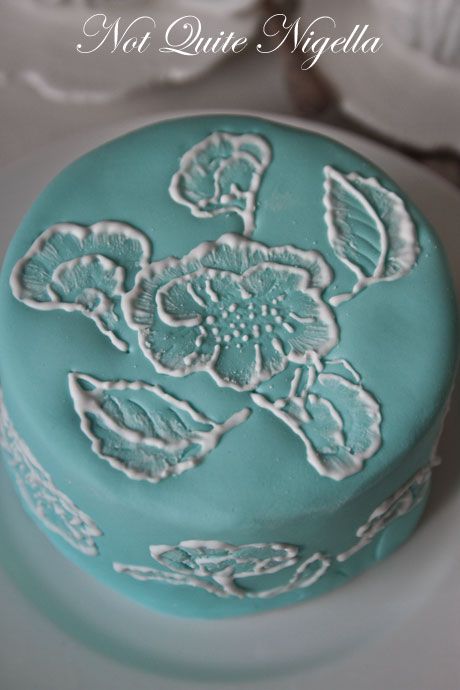