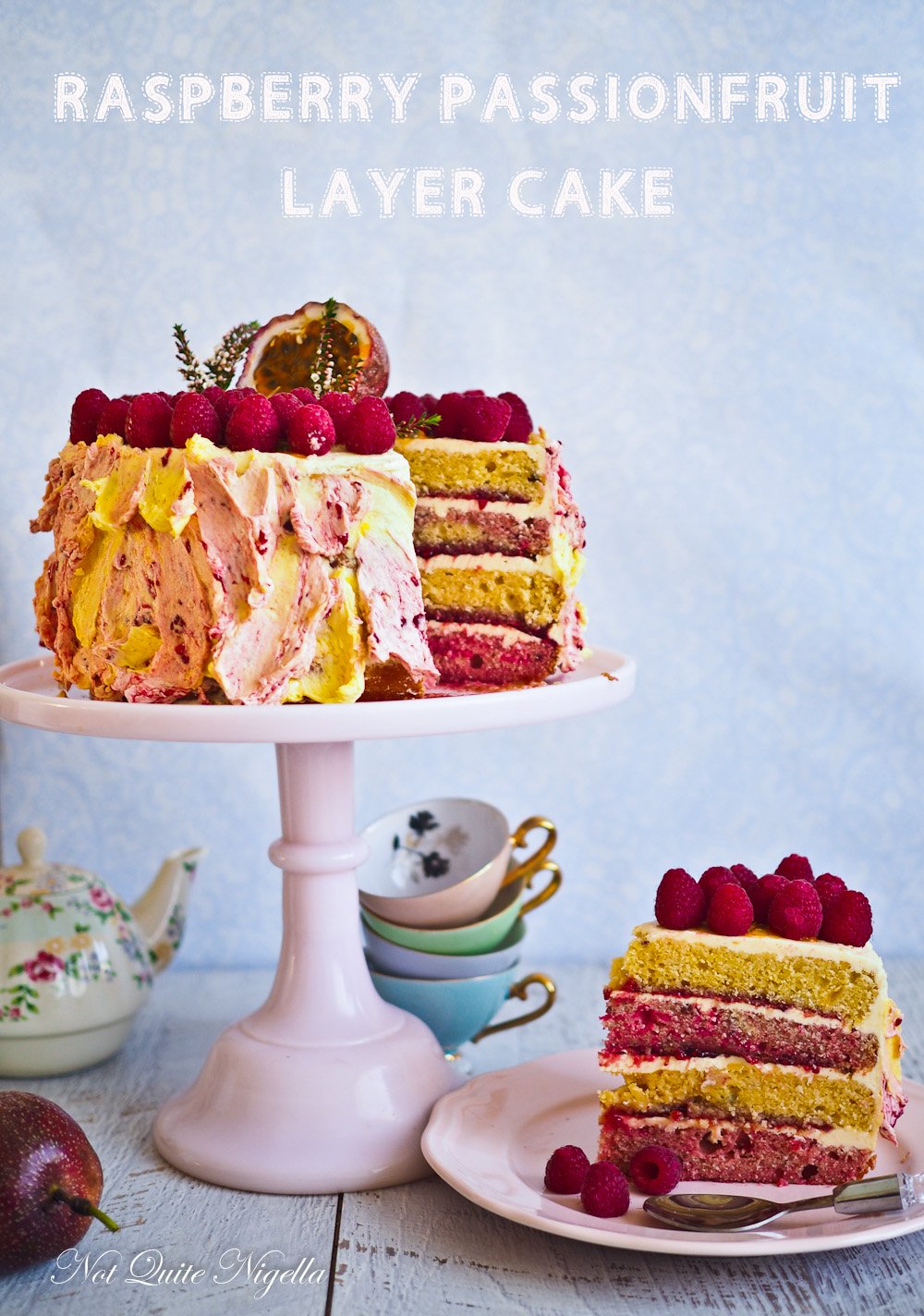 When I was little my favourite ever ice cream was a simple ice cream in a cup. It was called a Twister and it was vanilla ice cream swirled with raspberry sauce and passionfruit. Except nobody really knows what I'm talking about because apparently I was the only customer of the Twister and when I talk to my friends about it they talk about other ice blocks. The Twister has since been replaced by a much fancier version that is nothing like the original. But because I have the food memory of an elephant, I still love the original Twister mainly for the combination of flavours. I think it was the tartish passionfruit and raspberry and the creamy vanilla that I adored so much.

I was thinking about this combination when I saw some raspberries on sale recently. They're usually $8 or $9 a punnet but when I saw 3 boxes for $10 I knew that I had to grab them and recreate some childhood memories. Not through the actual ice cream (although thinking about that, that makes more sense) but through a cake. I had the cake in my head immediately. It would be a four layer buttercake flavoured with passionfruit and raspberry. On the outside would be a painter's dream of buttercream splodges coloured with fruit and it would be topped with fresh fruit. And I would call her Penelope. And even if you didn't want to ice and make this a layer cake, I have to say that leaving this as a simple butter cake is also a great idea. This is one of the moistest butter cakes I have ever had and it is perfectly tender and buttery. 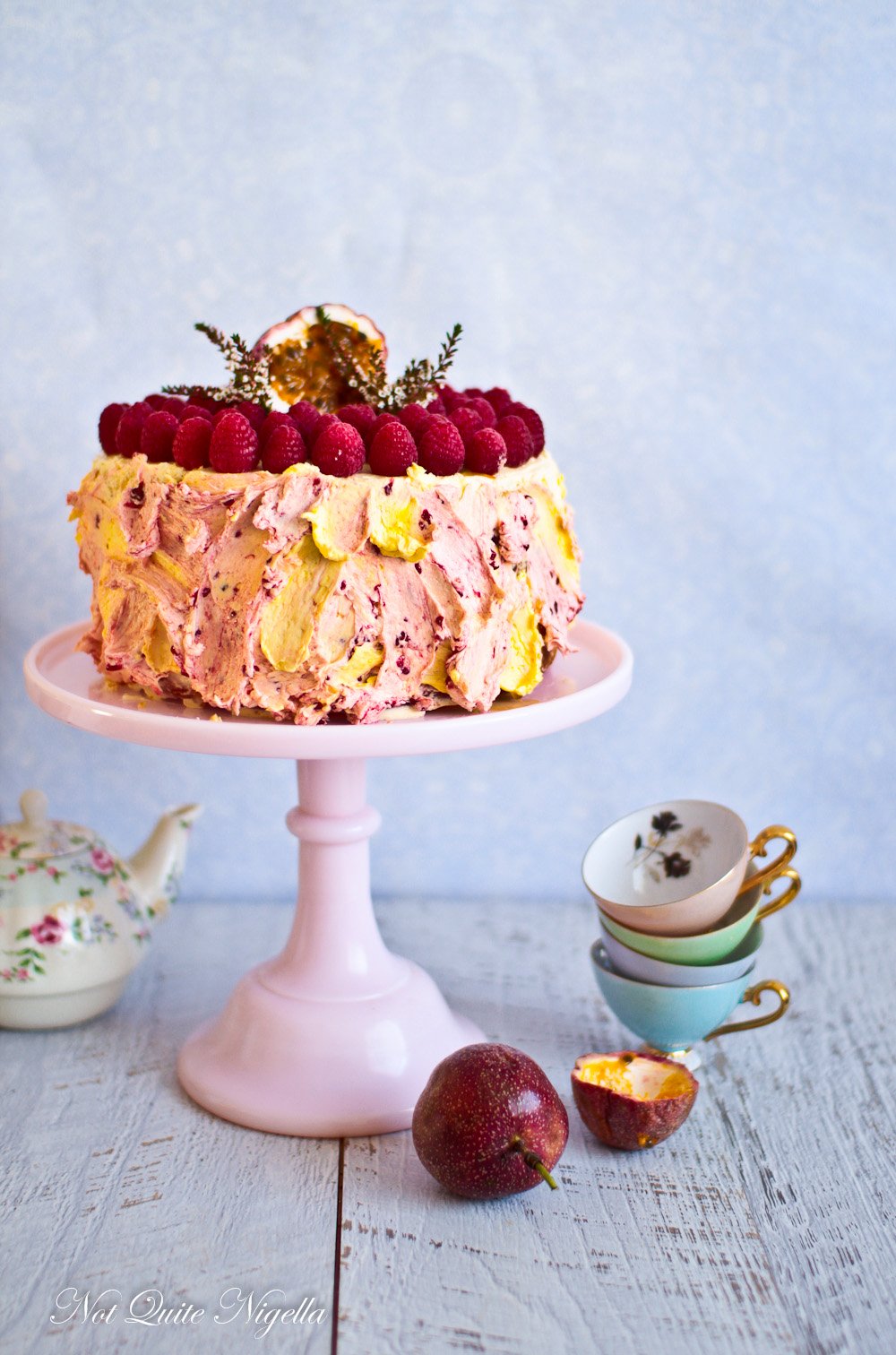 Speaking of childhoods, I had my birthday in May and I've discovered a little hobby that we love to do. They're called escape rooms and they are basically like playing pretend with your friends like you did when you were little. Essentially you get locked up in a room with your friends and then have to guess your way out of them by deducing clues. I knew not all of my friends would be up for it so we planned a dinner afterwards. We ended up with five of us doing an escape room: me, Mr NQN, Louise, Viggo and Miss America. It wasn't Queen Viv's sort of thing nor was it Nick's and Belinda was supposed to come but she misjudged traffic and didn't make the start time.

So there we were, getting briefed on what we had to do. And if you're planning on doing one, the rest of the story is full of little spoilers so spoiler warning! We were all chained up and blindfolded for the first few minutes while they led us to our positions. I was separated from the rest of the group (the perils of being the birthday girl) and I was chained to a table while everyone else was chained up in another room. We had 80 minutes in which to solve the puzzles.

We managed to unchain ourselves - well actually I told them how to unchain themselves and they let their own sweet time unchaining me and the only person that seemed to feel bad about that was Viggo (haha thanks Mr NQN!). Poor Miss America realised that he was out of his depth a little and did the equivalent of curling up in a foetal position on the ground. "What's happening?" he'd occasionally ask. 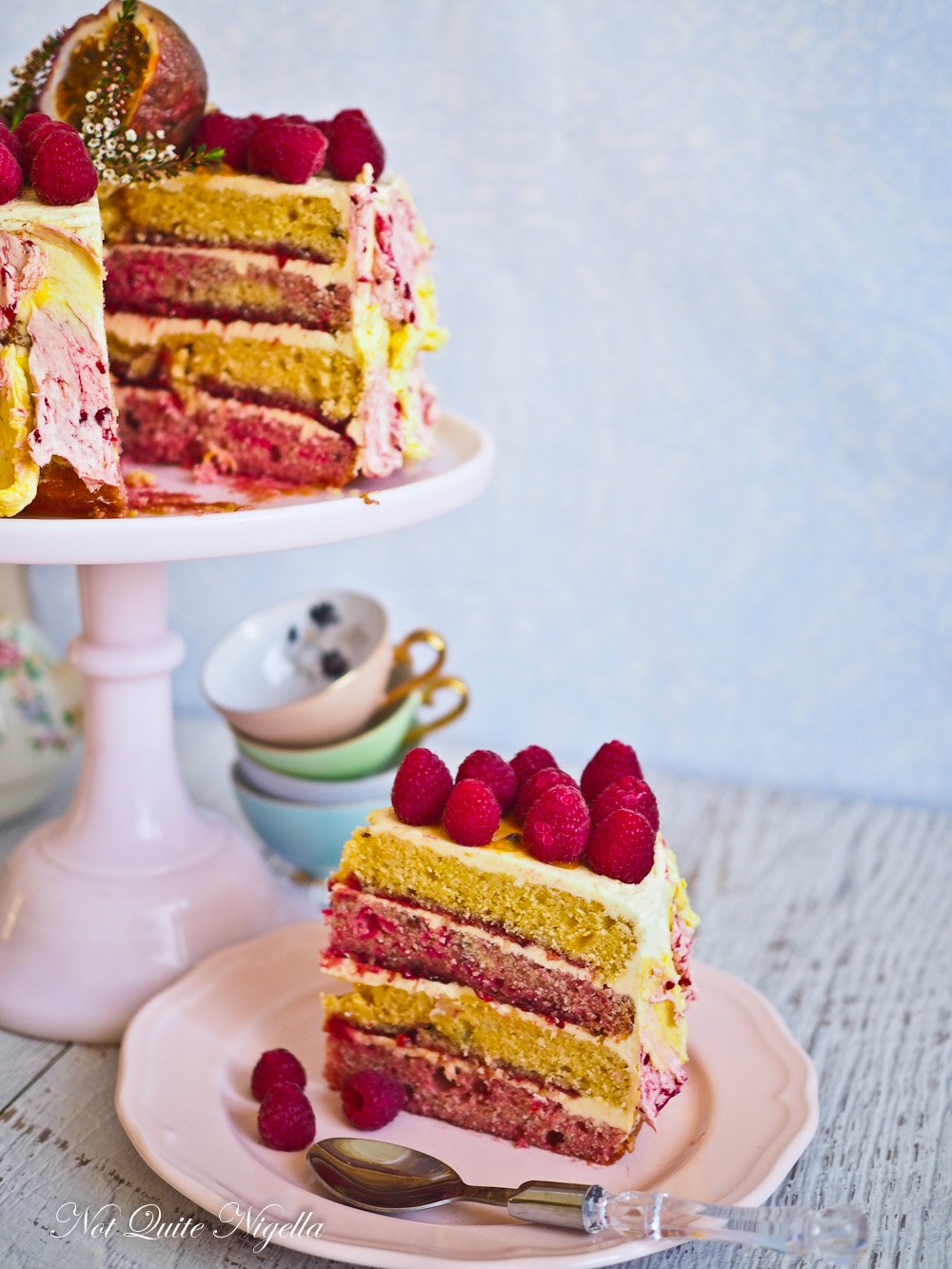 We made it through the first room and then the second room held lasers pointing in every direction. Channelling our inner Catherine Zeta Jones we snaked through the lasers on our bellies arching our backs and extending our legs like ballerinas. "Extend your foot 2 centimetres...no, stop!" they'd say coaching Mr NQN and I as we tried to pass through the lasers. Tall Mr NQN managed to hit two points with his super long arms while Viggo and I hit one each.

We tried the read the clues before realising that we had not just one room left but two rooms to solve. We interpreted riddles on the walls and joined hands to reveal clues, our bodies conducting a signal to open doors. It was very high tech and we raced against time to try and solve the puzzle and get out of the rooms. Alas, we didn't make it and took 10 minutes longer than we needed to. But we're all (including Miss America) rather smitten with escape rooms and have planned many future escapades together. Because being an adult is great but sometimes you want to play like you did as a kid. And eat the same sort of things too like this cake!

So tell me Dear Reader, does anyone remember this ice cream? What was your favourite ice cream as a child? Would you enjoy an escape room and have you ever done one?

*To make 1 cup of cake flour, add 2 tablespoons of cornflour or fine cornstarch to a measuring cup and fill to the 1 cup measure with plain flour.

Step 1 - Preheat oven to 130C/260F (yes very low). Line 2x 20cm/8inch round baking tins on the base and sides. Beat the sugars and butter together until very pale (about 3 minutes on medium speed). Then add the eggs in one at a time beating well after each addition. 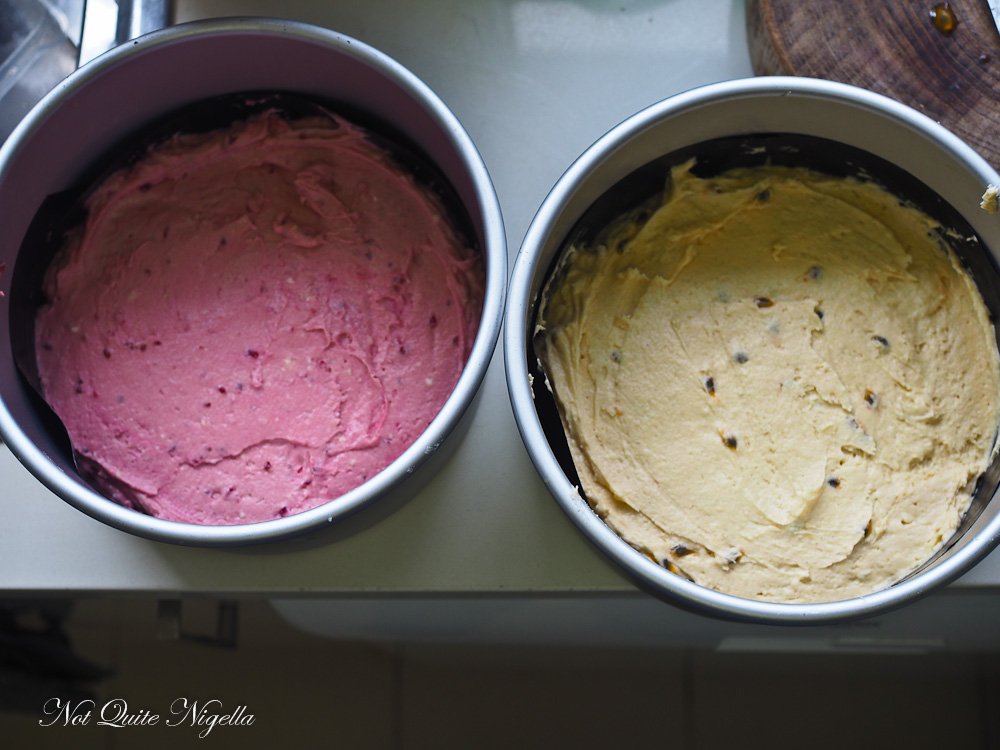 Step 2 - Mix the lemon juice with the sour cream. Fold in the cake flour, baking powder and salt in two batches along with the sour cream mix until only just combined. Divide the batter into half and add the passionfruit to one lot and stir until just combined (do not overwork the batter). And add the raspberry jam and pink colouring to the other batter. Spoon into the prepared tins. Bake for 1 hour 10 minutes or until a skewer inserted comes out clean. I realise that this is a long time to bake at a very low heat but once you taste the cake, you'll be converted to baking at this heat as the cake is incredibly moist and not dry on the outside. Cool completely in the tin. Cover with cling film and you can leave this overnight or place it in the freezer until you need it.

Step 3 - Strain the passionfruit and set it aside. Using a beater attachment fitted to an electric mixer beat the butter on speed 3 out of 10 where 10 is the fastest. Beat for 5 minutes until white and smooth. Add the sugar and water in two lots and beat on the same speed for 10 minutes. It will be done when you rub the icing between your fingers and you don't feel any sugar crystals. 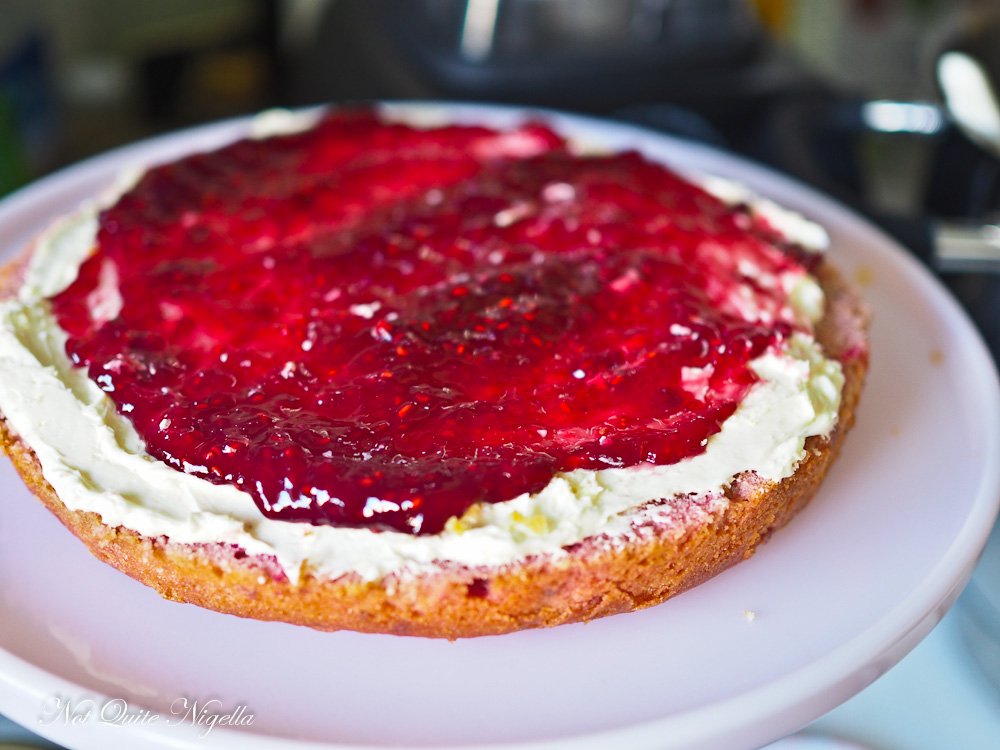 Step 4 - Divide the icing into a 2/3 lot and 1/3. With the larger lot, use that to ice the cake so leave it white. Cut each cake in half horizontally and spread 3 tablespoons of frosting onto each layer and then a couple of tablespoons of raspberry jam. You don't need too much between the layers. Repeat until you have four layers sandwiched together. 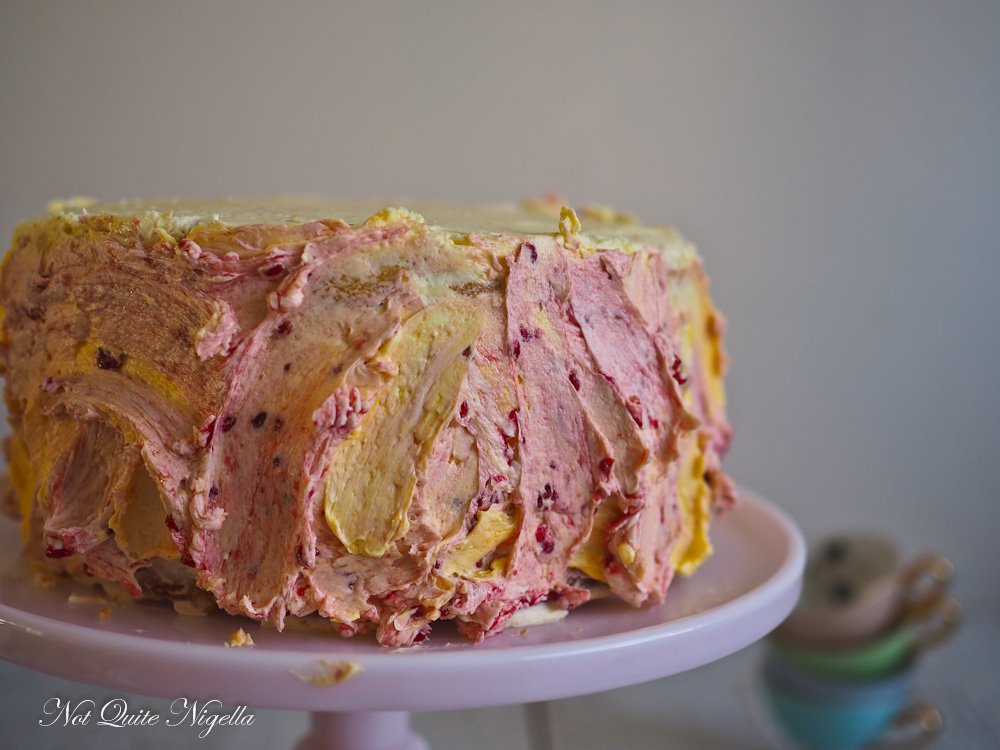 Step 5 - Spread a thin crumb coat on top of the cake. Refrigerate for 30 minutes to firm up. Then with the remaining 1/3 of the icing, split it in two and add the passionfruit to one (you'll need to beat this in) and the raspberry jam to the other). Using angled spatulas, dab icing onto the sides. Spread the seeds from a passionfruit on top and then decorate with fresh raspberries and passionfruit.