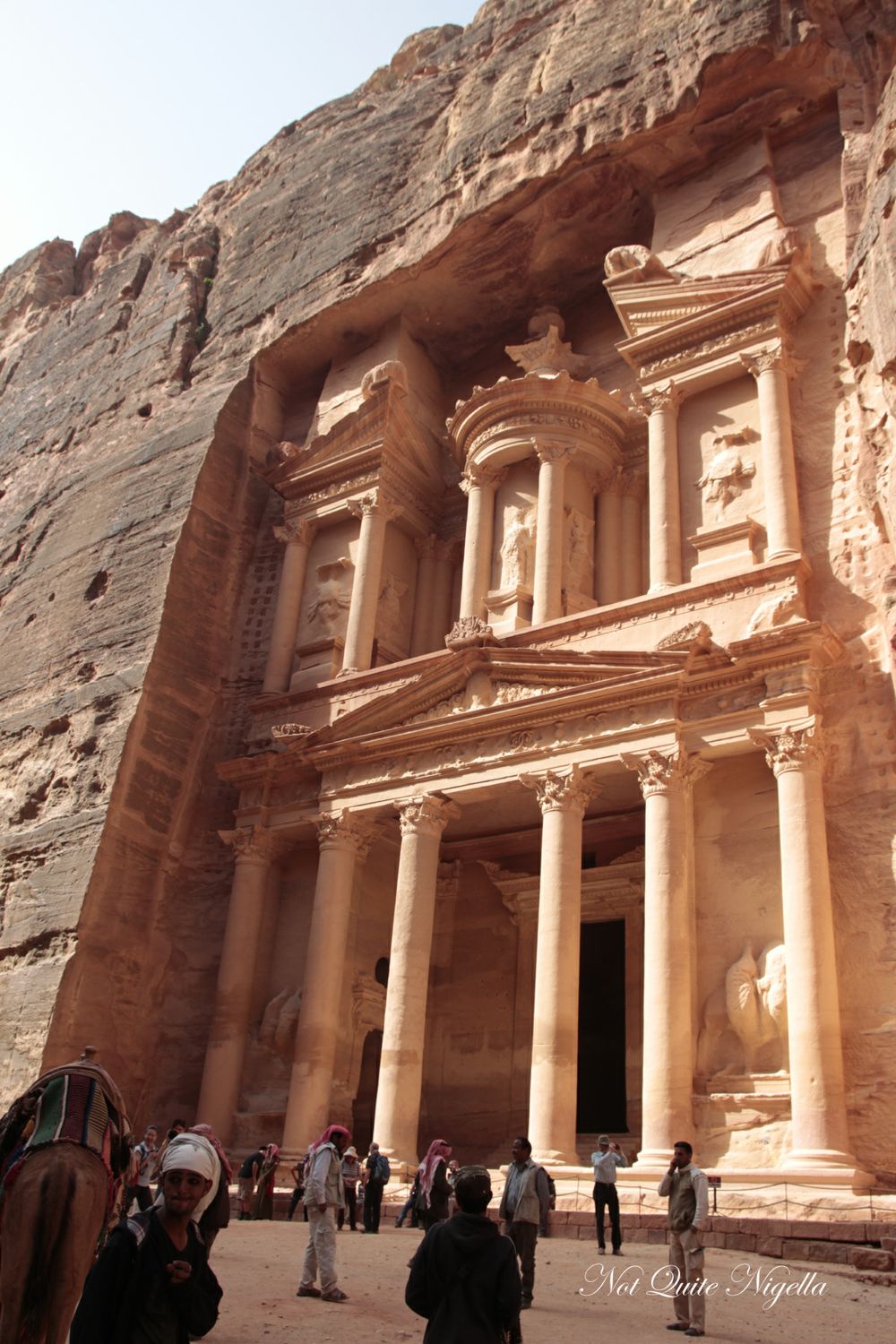 Travelling overseas with twenty five odd travel writers is always an interesting experience. People break off and form groups while others wander off by themselves. In our circle we were  discussing how travelling in a media group, which is how a lot of travel journalism is done, means that because we are busy dashing from place to placeand we often miss out on spontaneous interactions with locals. 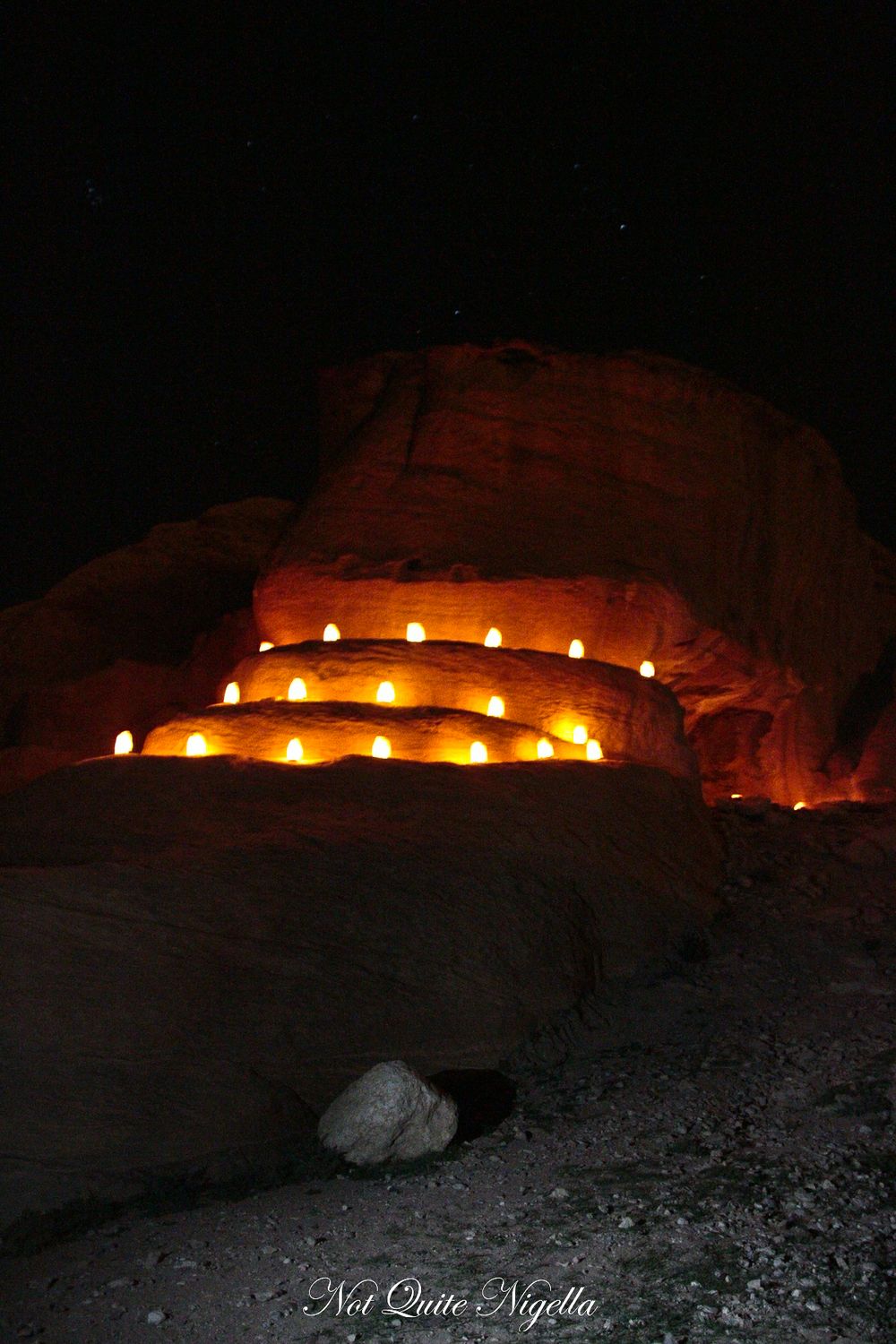 That situation changes that very evening. We have arrived at Petra, location of one of the world's most incredible sights and regular feature on traveller's must visit lists. UNESCO World Heritage listed since 1985, the rose coloured city was discovered by the Western world in 1812. It was the home of the Nabatean kingdom who were traders and warriors. Well preserved, the area was often subjected to flash floods and they took advantage of this and cleverly controlled the precious water supply via a system of dams, water pipes and conduits. 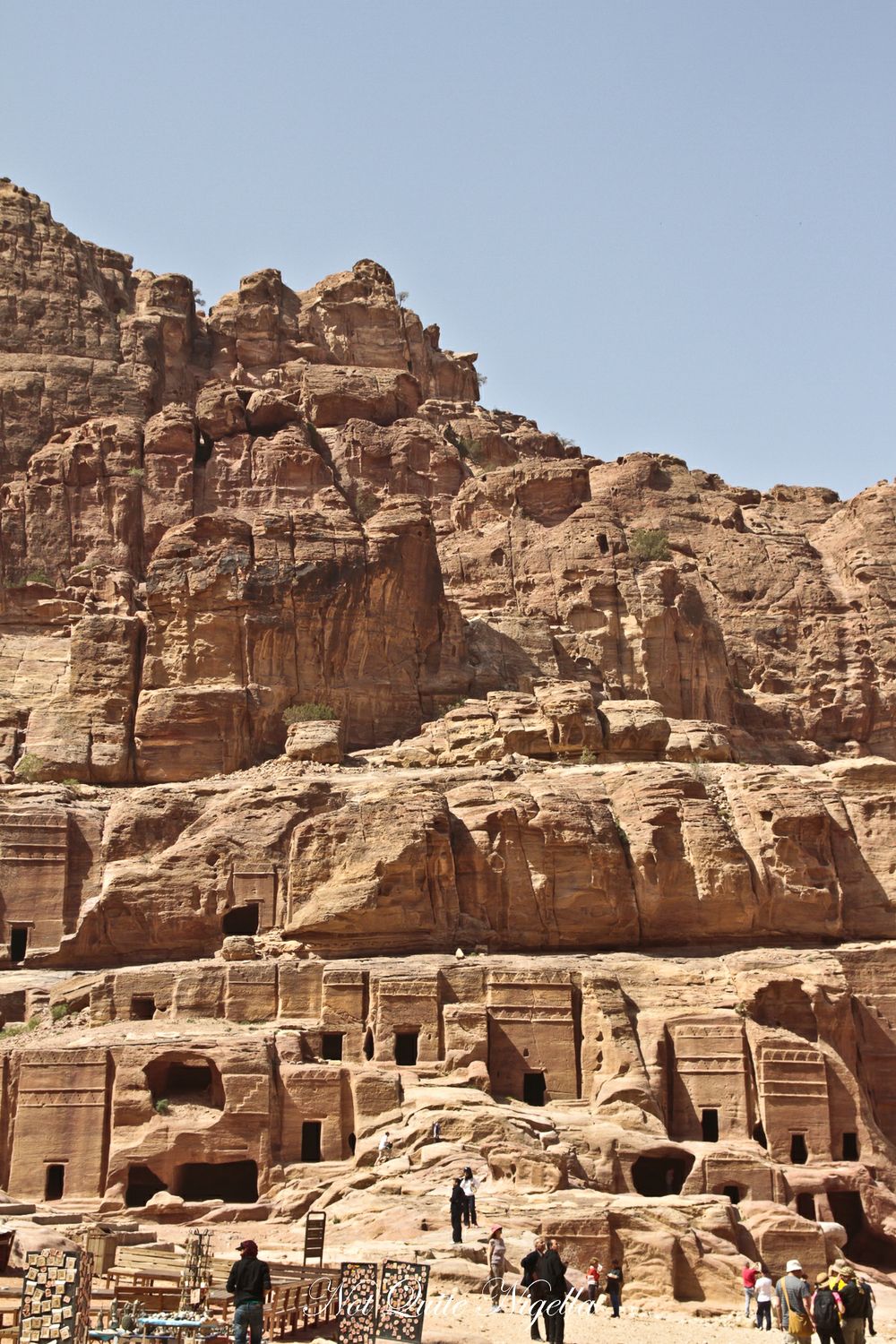 Because of everyone's fascination with Petra, it is also considered one of the most threatend landscapes. The biggest threats are unsustainable tourism, collapse of structures and erosion among others. Still, people can't help but flock in droves to catch a glimpse of the facades that reveal so much about ancient life. During the evening, there is a Petra by Night event which starts at 8:30pm. People take the all terrain walk towards Al Khazneh or the Treasury building, the path consisting of sand, smooth stones and rubble lit by glowing red paper bag candles.  The one and a half kilometres walk takes around 45 minutes and is downhill towards the Treasury.

What greets us at the end of the walk is the sight of countless candles all giving off a faint illumination of the intricately carved Treasury building. Everyone takes a seat on the mats and are offered cups of sweet tea. A man sings plaintively. They're classic, traditional songs and he greets us warmly first before he sings with his rababa. A ney pipe player then plays five pieces. If only the people around us would stop talking. Conversations are being had all around us even though the singer had firmly asked for no talking. People get up in the middle of performances and crunch gravel heavily moving away. Petra by Night is for some a spiritual and beautiful performance. However for others, even among our group, it is not. I even overhear someone from our group say "If I had known this was it, I wouldn't have bothered." 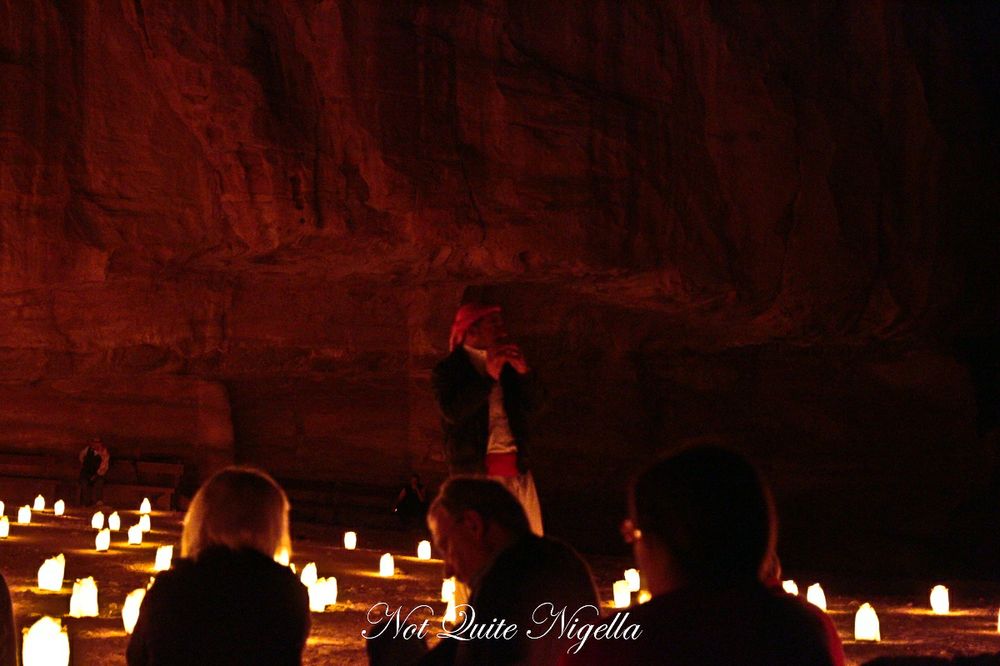 After the performances we are invited to walk around. Because of the UNESCO world heritage status, the Treasury building cannot be illuminated so visiting during the day will provide much more detail. A man approaches Vanessa and I. He tells us that he is a supervisor there and we talk to him about the Petra by Night show. He is young but walks with a cane and is very friendly. He tells us that tonight, almost 1,500 candles were lit starting at 5:30pm (usually about 800 candles are lit). They hold these Petra by Night shows three days a week and sometimes have private shows for wedding couples where the staff stand off to the side and the couple are given the area to themselves while being treated to these beautiful performances.

We suddenly realise that our group has disappeared. We thank the man and make our way back rushing because the crowds have dispersed and the long sandstone passages of the Siq still lit with candles seem almost eerie when there are just the three of us. He appears beside us and I'm surprised at his speed given the cane. "Come over here" he says. "I want to show you something secret" and he points to an area of rock where the ancient Nabateans had carved a caravan of camels and a single trainer into the rocks. It's a little like a 3D image and it's on close, concentrated inspection that you catch glimpses of the camels and their faces and shapes. 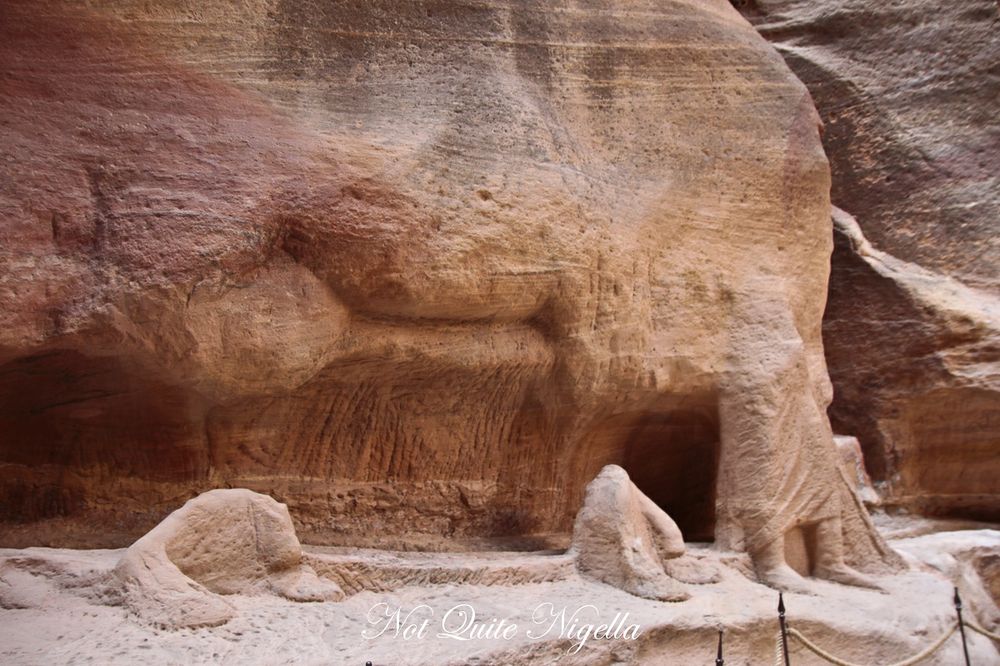 The caravan of camels and their trainer by day-can you see the trainer's boots on the right?

Thanking him, we pick up speed as we want to make sure that everyone isn't waiting for us-it's late and everyone is likely to be tired and possibly cranky. "But I want to show you something else" he says and we look at each other. A part of us loves this special tour but another part knows that people must be wondering where we are and the siq is getting more isolated and dark. "It is very quick. Give me your water" he says to me and he splashes into a small hole in the sandstone wall.

"Sometimes guides have up to 50 people in the group" and he massages his fingers in the small wet hole. "This is like blood or henna" he says and then shines a light onto his fingers. It looks just like blood and then puts three dots on my cheek. "The guides sometimes put this on the people's faces so they know who is theirs" he explains.  The sudden reference to blood and touch does make me nervous and if the siq looked foreboding and lonely, then it looks even more so after this. We rush as fast as we can and he keeps up with us telling us that he has his car not far from here and he will drive us to the entrance so that we won't be late. 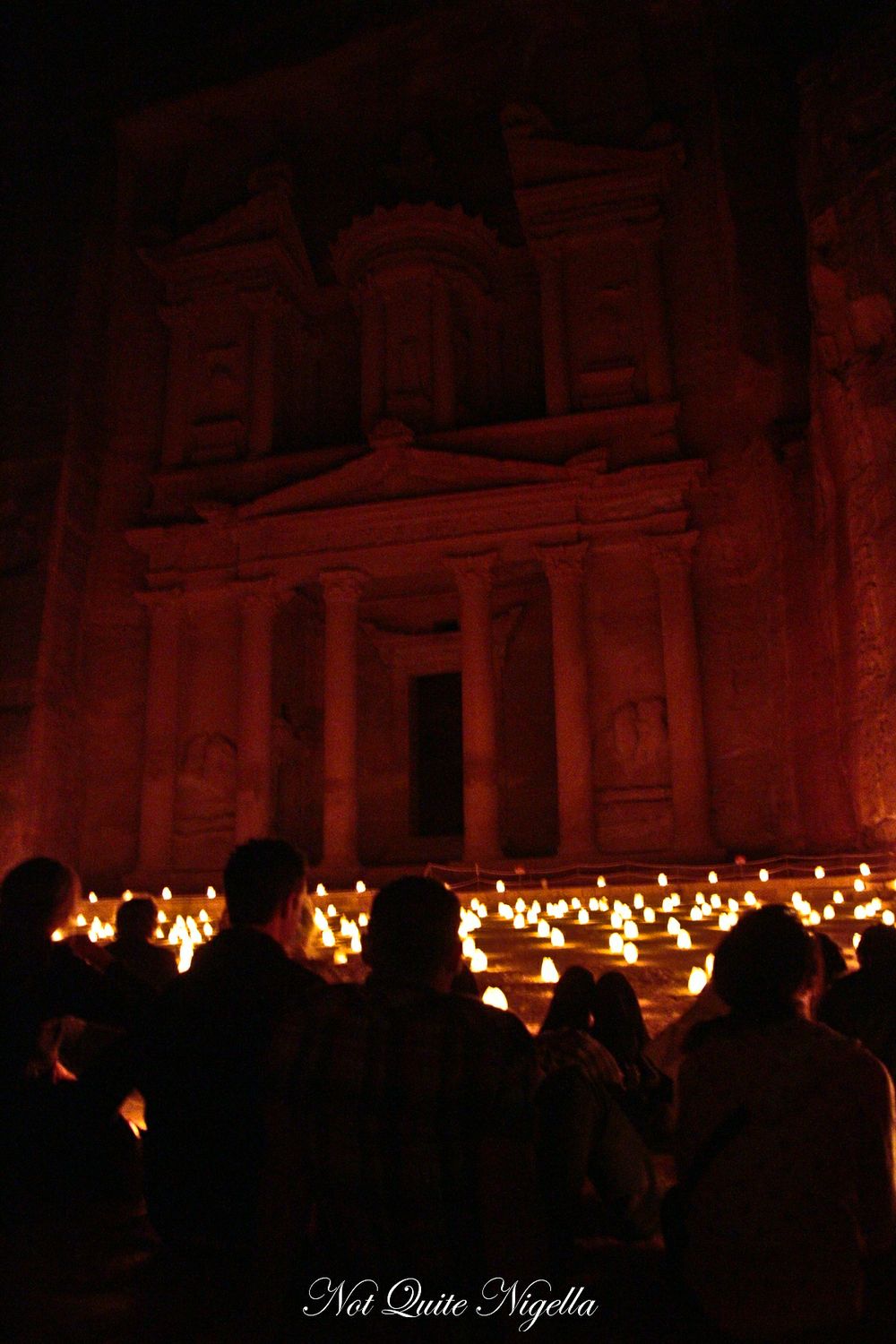 The walk back is harder because we are walking uphill and he offers to take my camera. There's a steep, rocky, rubbly hill and he holds out his hand to help me. I take it and shortly we are at his car. Vanessa takes the front seat and he starts the car and drives slowly through the rocky area. We spot Glenn who is struggling with the walk and give him a lift. Before long we are passing other members of our group and some elderly Japanese tourists who stare at the car as if an apparition and then try to hail it. Everyone looks exhausted by this last section and I wish we could give them all a lift back. We farewell our friendly, unexpected guide. 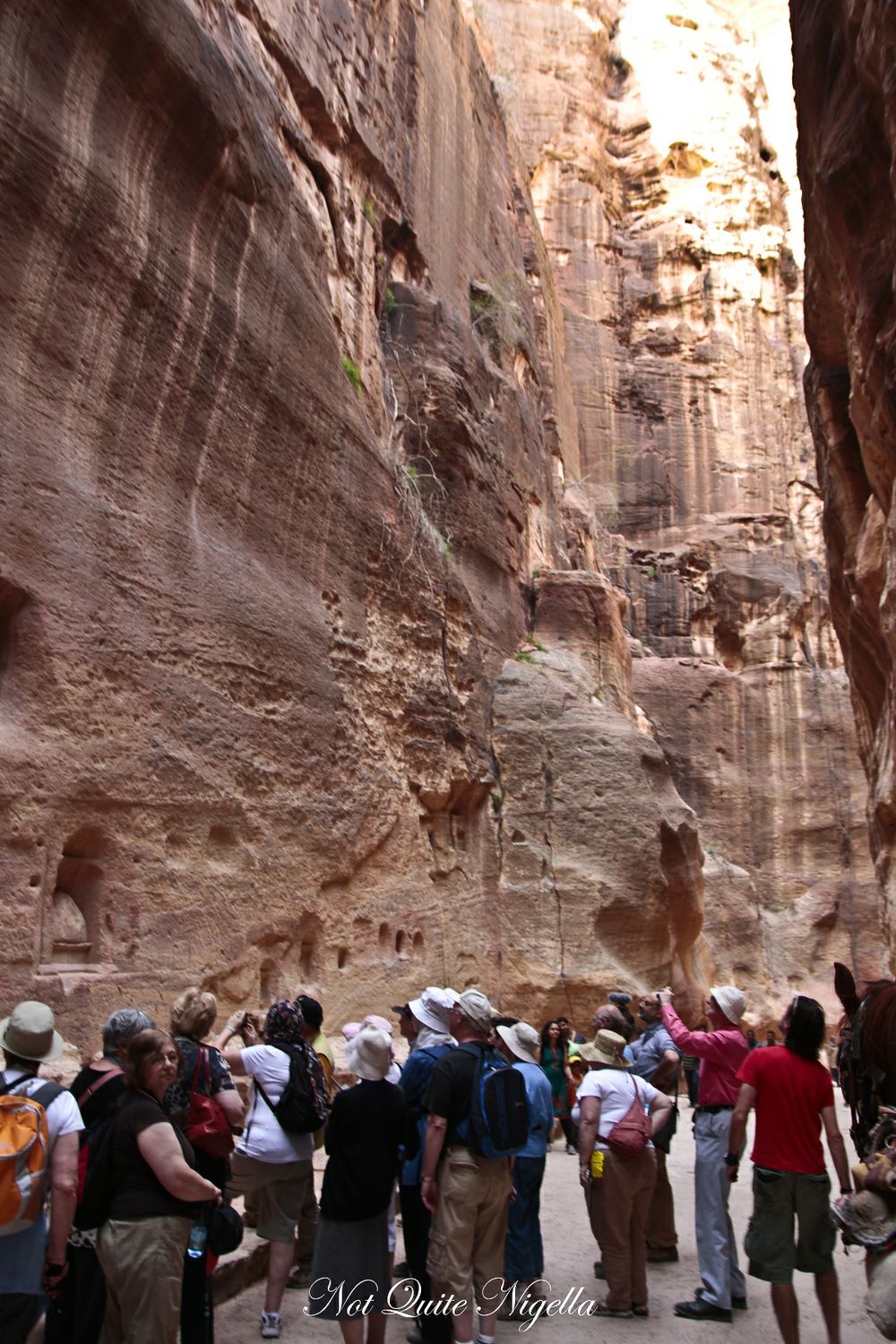 Petra by night is a stark contest to Petra by day. During the day the sandstone siq walls reverberate with the chatter of hagglers, sellers and the sound of metal horseshoes on rock. Horses and carriage make their way up and down the narrow pathway which at its narrowest is only four metres wide. The next day when we reach the Treasury building below, the touts are ready and proffer all range of items from jewellery, donkeys, drinks, postcards and camel rides as well as an astonishing range of accents. 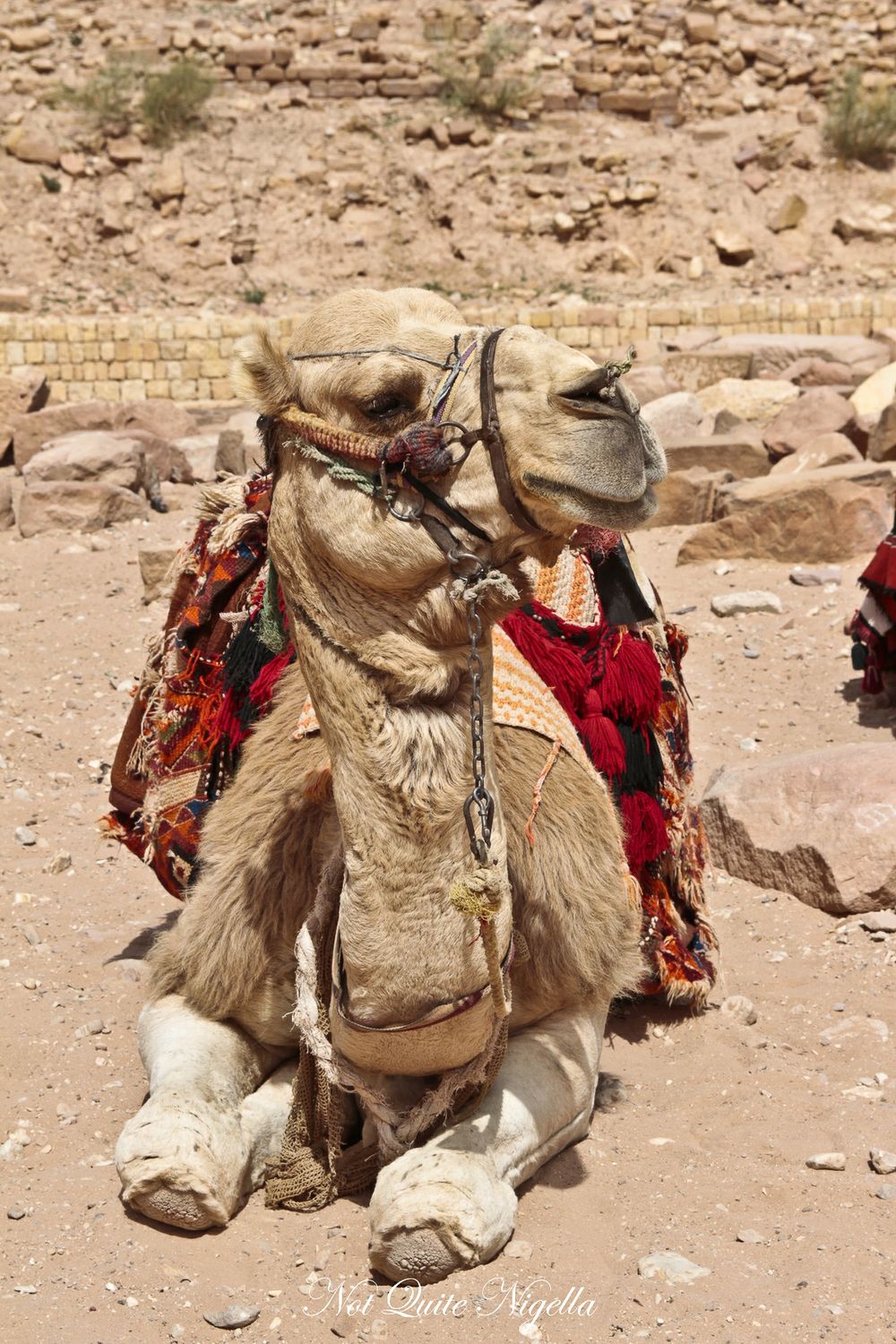 "Where you from?" one asks us. "Lovely jubbly!!! " he says when hearing us answer that we are from Australia. "No woman no cry!!" and he then sings a strange mish made of lovely jubbly against the melody and beat of "No Woman, No Cry." You two sisters?" another one asks Gwen and I although she is Irish American and I'm Chinese so we don't look anything alike. "You two sisters from another mister?" he quips. A young girl pats a light ginger one eyed cat and Gwen asks her whether it is her cat. "Yes her name is Angelina Jolie" she answers. Someone else gets a donkey ride from a donkey called Monica Lewinsky. At this point I truly wonder what they think of Western culture! :) 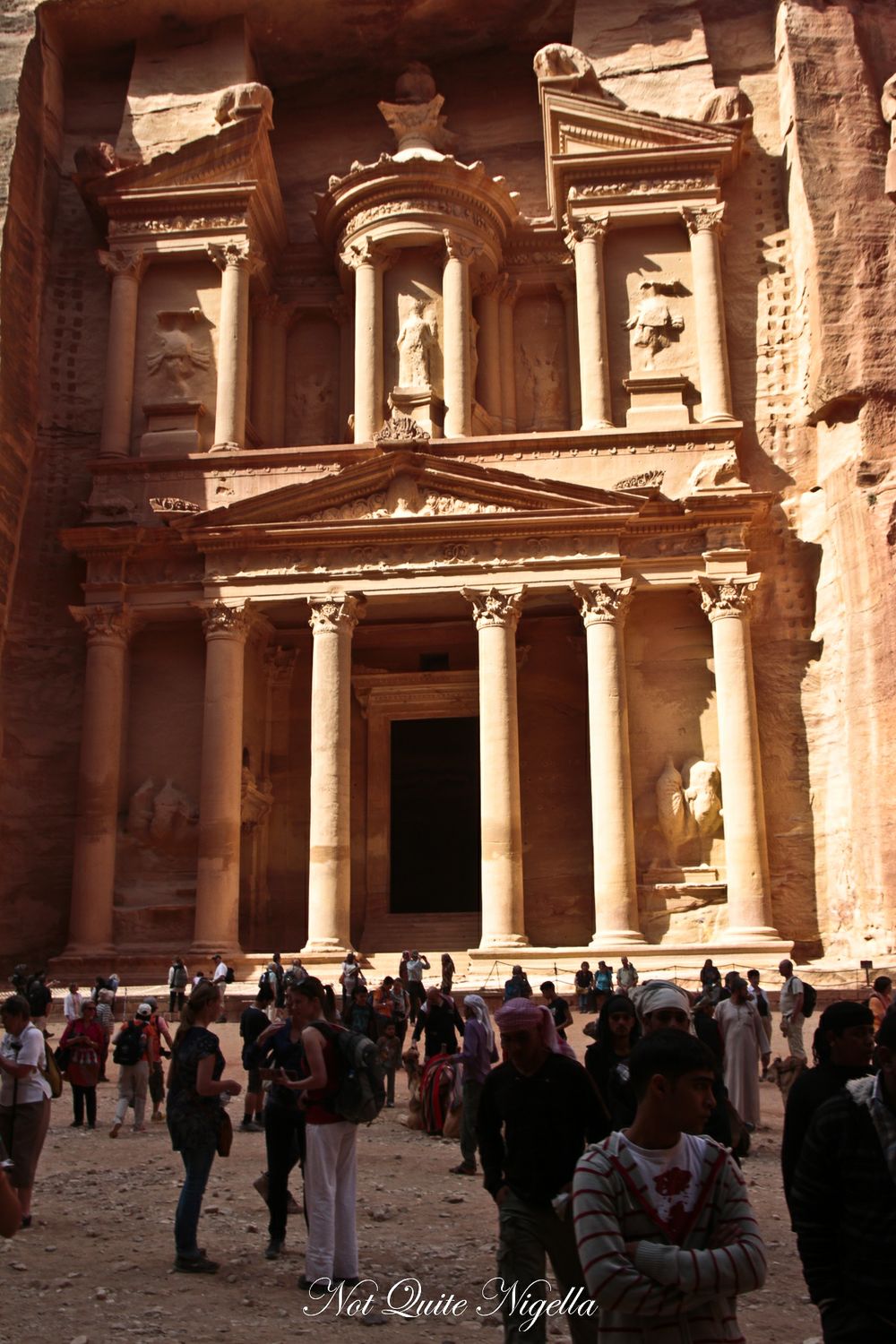 The carvings in the sandstone of Al Khazneh or the Treasury are illuminated by the sunshine and are so detailed although the wind has blasted some of edges until dull and the identities become obscured. The Treasury is still a spectacle in the cool morning light. It was discovered by the western world by Swiss Johann Ludwig Burckhardt in the 1800s.  A legend helps to explain what some of the items are that are carved into the 150 feet tall structure which includes various mythological creatures.

Interestingly, Salam points out that there are twelve columns to match the number of months in a year and there are seven goblets of wine for each day of the week and thirty flowers for each day of the month. You can also see bullet holes in the urn from where it has been shot at-the urn was said to hold the treasures of the treasury but it is in fact solid sandstone. 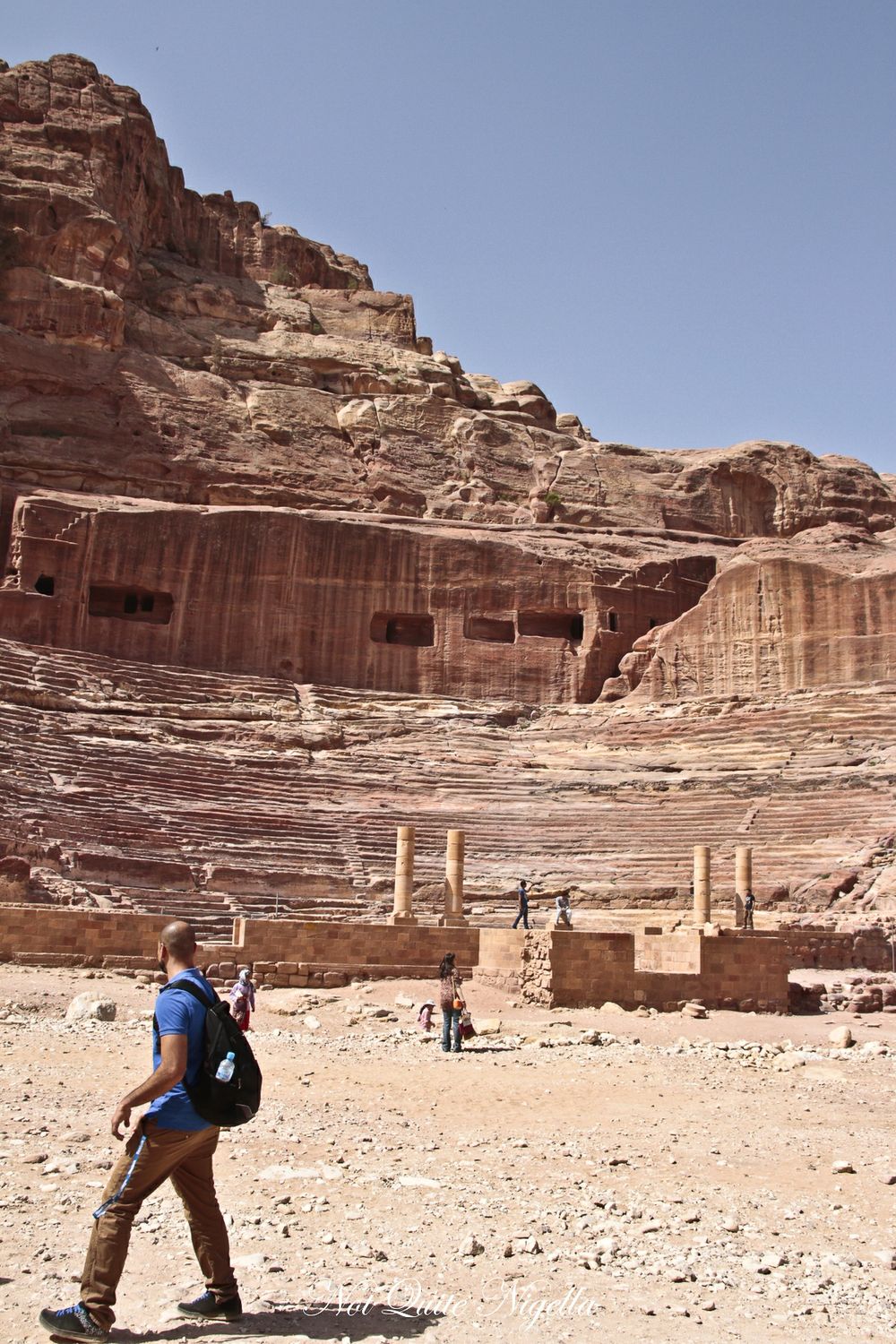 We take the walk around and pass the open theatre. We pass intricate facades while young boys pass us shouting "taxi!"  which actually refers to the donkeys that they're guiding. While some areas are shaded by the tall structures, a lot of it is exposed to the sun and even in winter when we are visiting, the sun beats strongly so we are careful to wear hats and sunscreen. 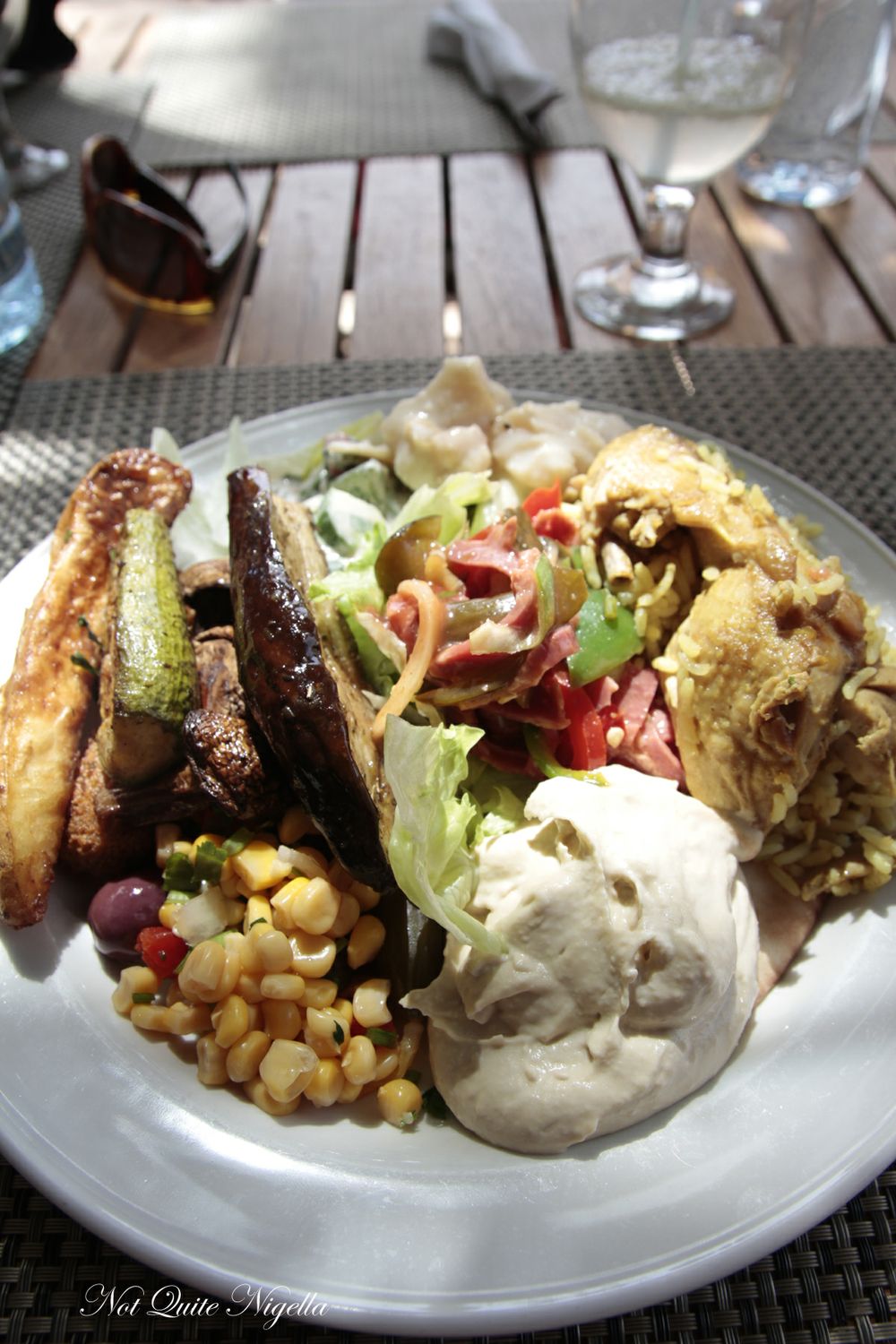 There is restaurant in the middle of the ancient city called Restaurant Basin and this is an average sort of buffet run by Crowne Plaza. The best idea is to stop is for a drink or to enjoy the breeze on the terrace or air conditioning inside. The walk back is hot in the afternoon sun and the offers of donkey rides is tempting. 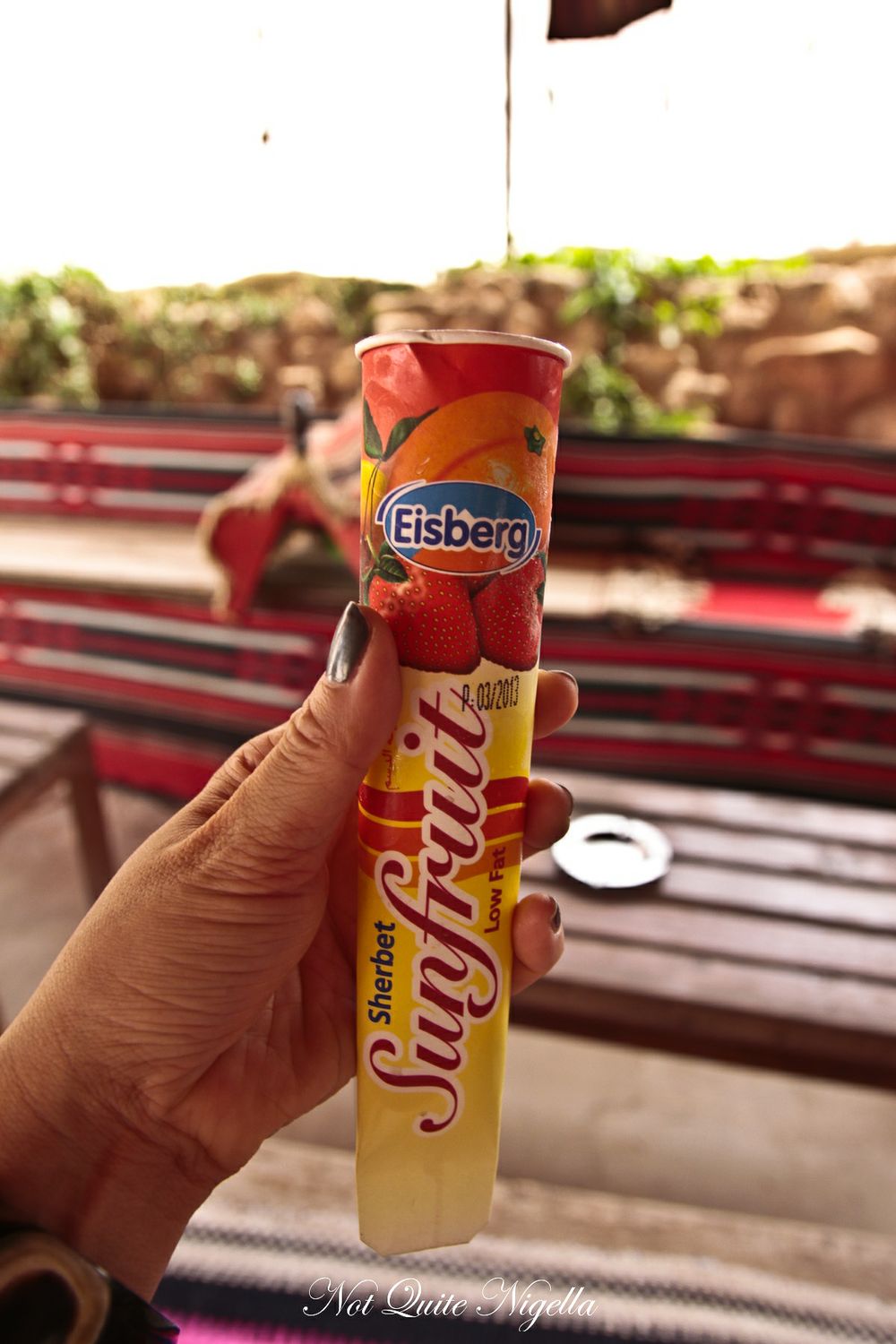 We stop for an ice cream. On the way back, we have been booked in for a horse and carriage ride and we wait for our driver holding our assigned ticket. He is late as he has been double booked. "I will be back. Twenty minutes I promise!" he tells us. 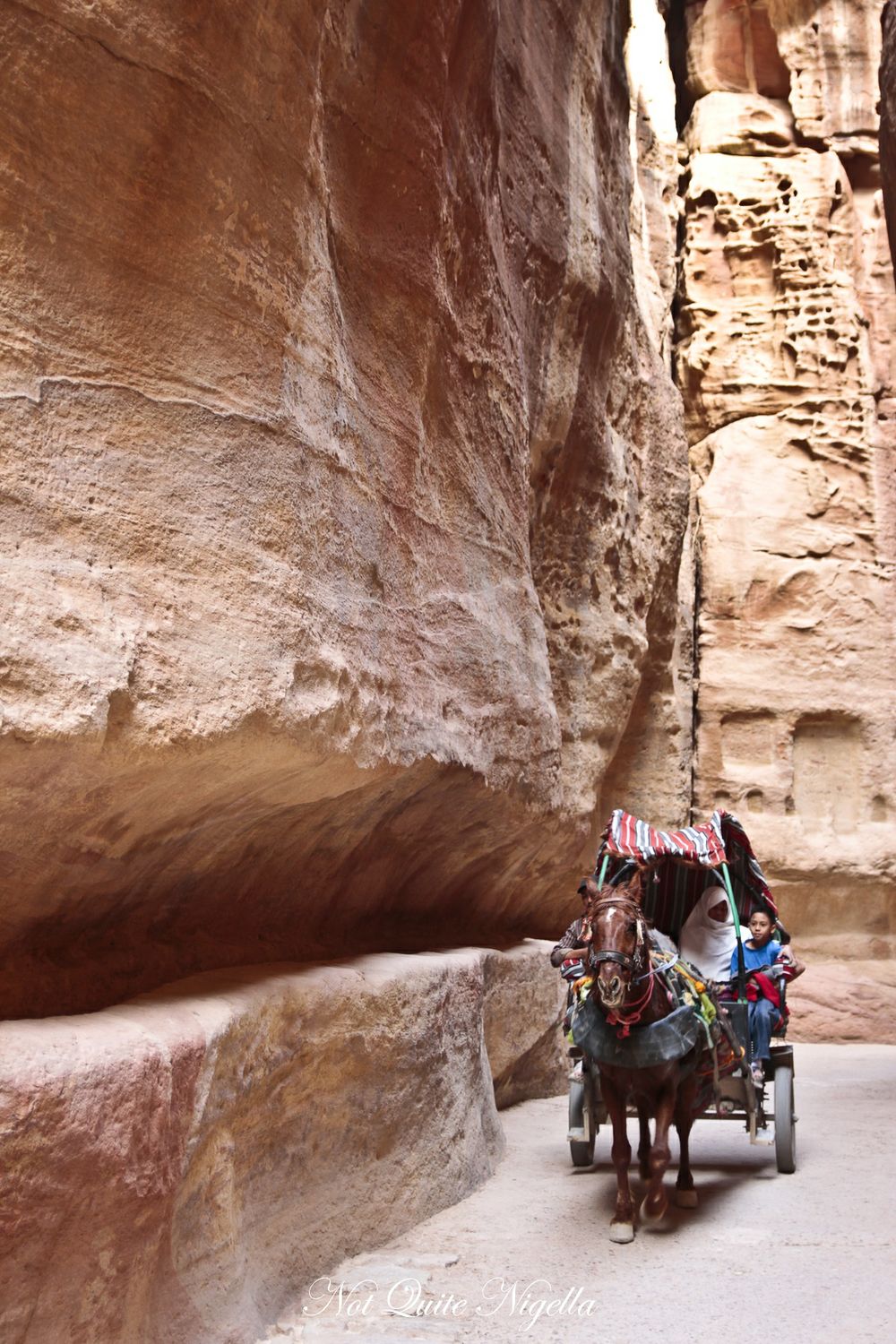 Twenty minutes later there's a commotion and loud whopping coming from the narrow entrance. Our driver and carriage burst through the crowd that disperse quickly and he's whooping loudly and the horse kicks up sand and stones. "NUUUMMMBER TWO!!!" he bellows triumphantly riding at speed towards us and the horse makes a last minute turn. "I promised you twenty minutes didn't I?"

We depart with leaving trail of bystanders staring. The ride is bone shaking and the young driver relishes the speed and I hear someone else in another carriage yelling out "I forgot to wear my sports bra!!" 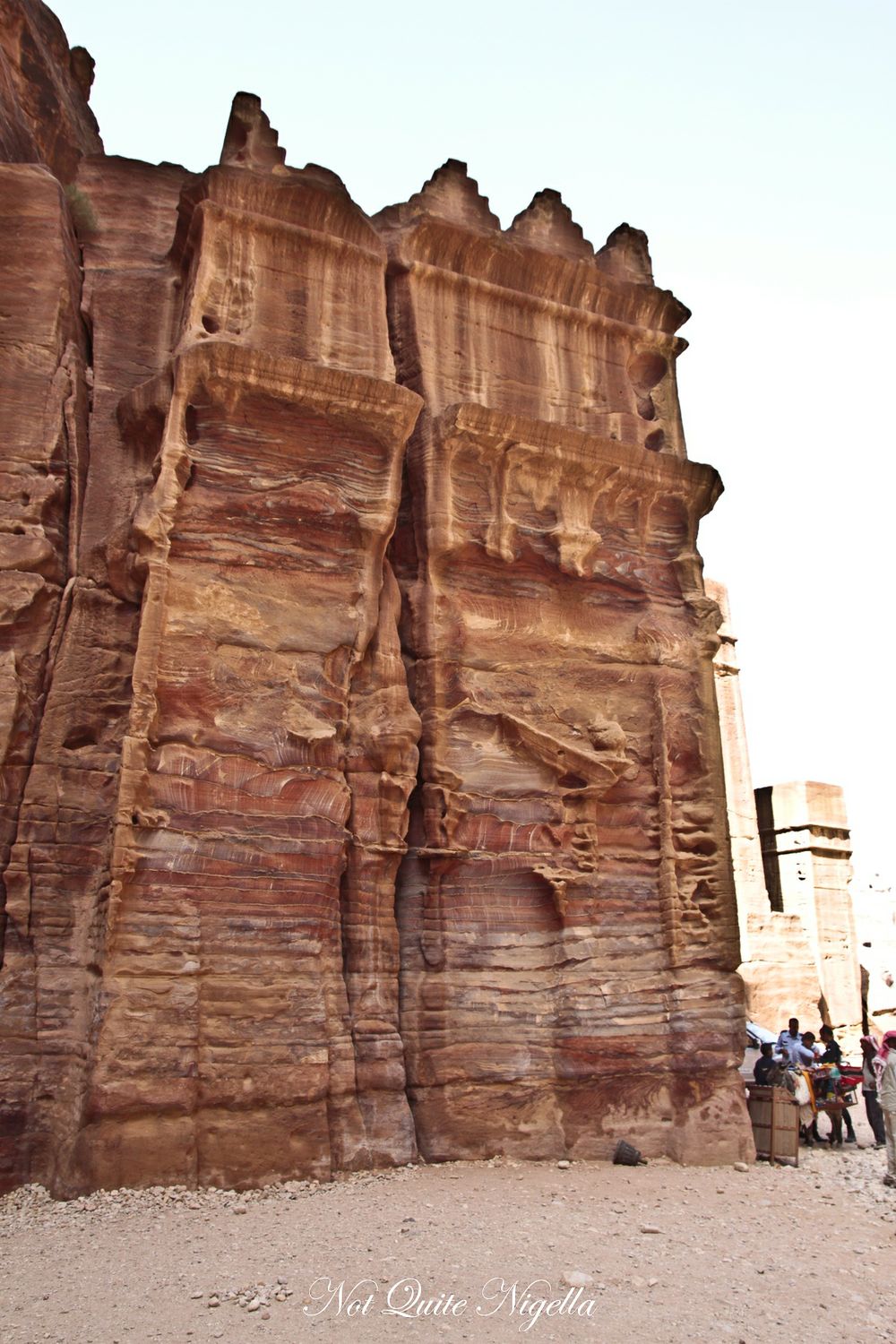 "Are you married?" he asks me and Gwen. I answer yes and Gwen answers no. "How many camels for you?" he asks Gwen, his kohl rimmed eyes sparkling with humour. "She costs many camels!" I tell him negotiating on behalf of Gwen. "And you'll need to throw in three donkeys too!" I offer. He counters with quite a portfolio of livestock. "I give you three camels, a donkey and a chicken for your hand" he tells Gwen laughing.

So tell me Dear Reader, when you travel, do you try and meet with local people? And what do you think of visiting endangered or threatened places? 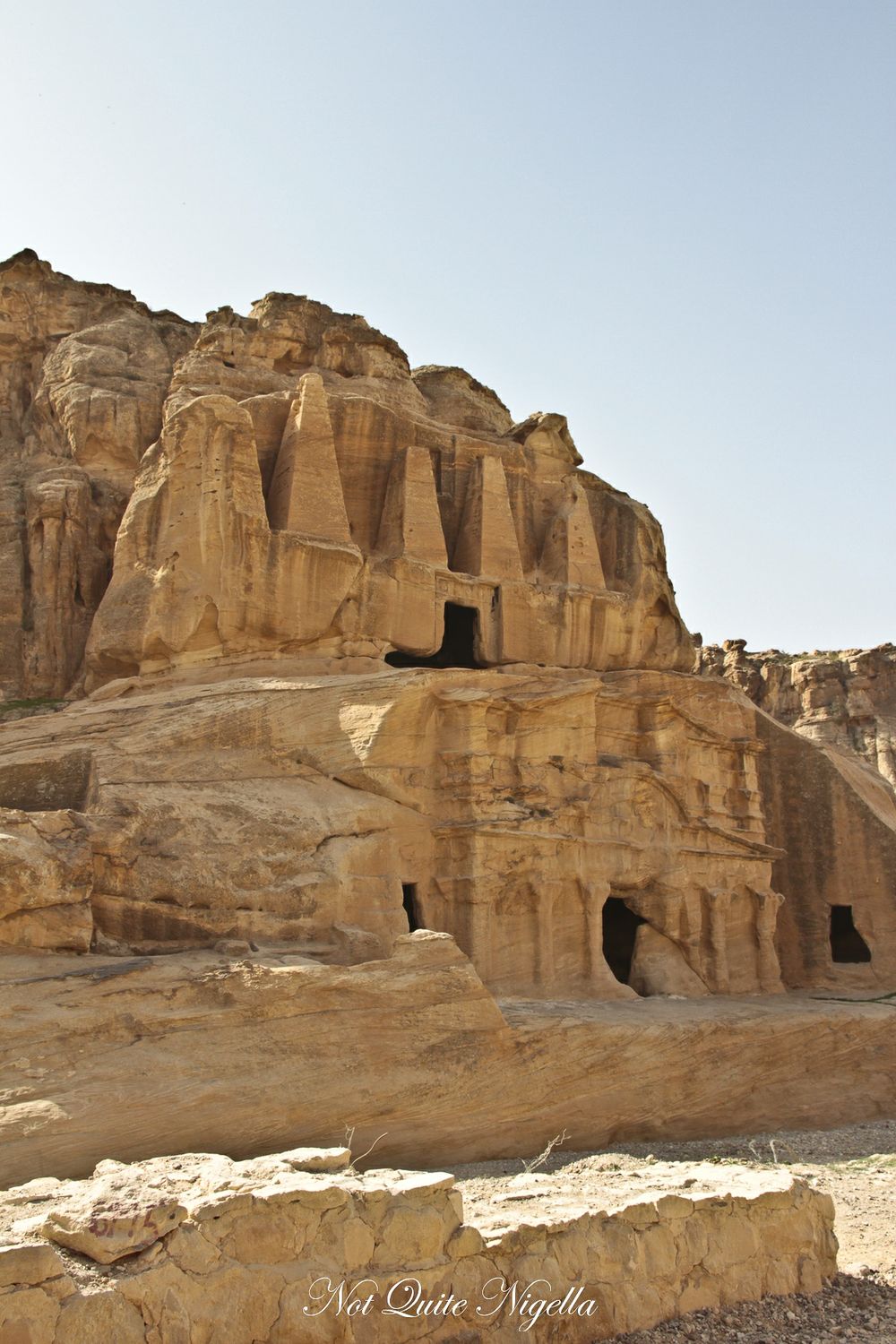 Petra is three and a half hours drive from the capital Amman, Jordan

Within the archaeological site of Petra