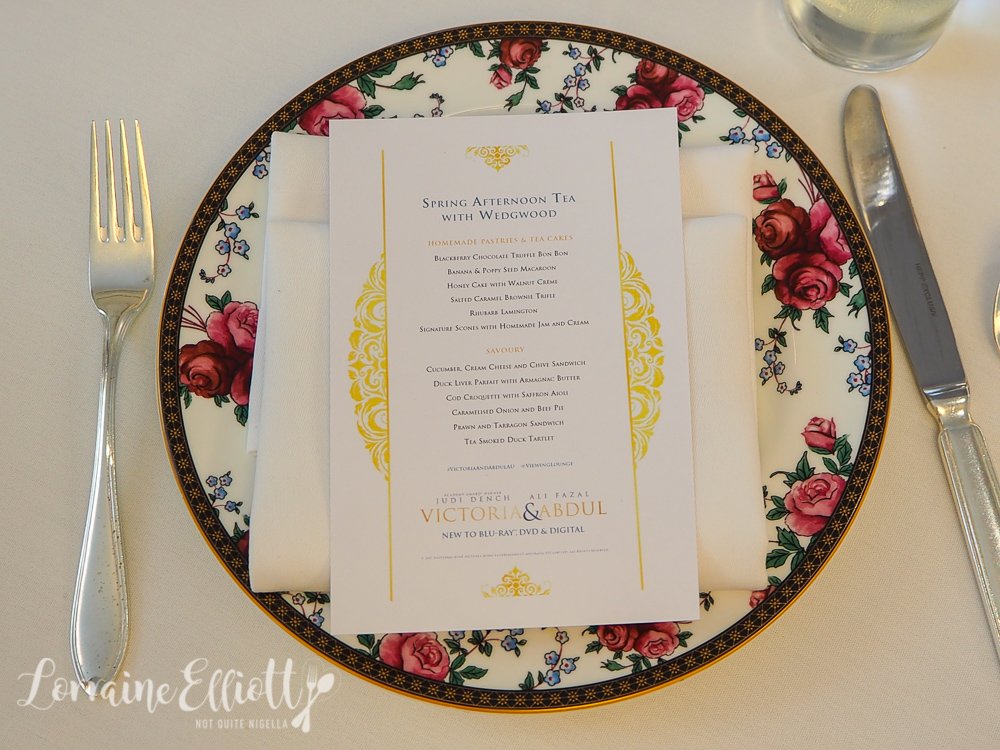 Are you really prepared for the etiquette minefield of afternoon tea? Etiquette expert Zarife Hardy of The Australian School of Etiquette teaches us how to be a royal and how to conduct yourself at afternoon tea, should you say find yourself in the unexpected company of the Queen.

Royals are in the news now. I've never seen so many people glad to hear of the upcoming royal nuptials between Prince Harry and Meghan Markle. Meghan has no doubt gone into an intensive training program to train her for royal life. And as for an event such as afternoon tea, there are a whole lot of rules to follow for that.

Zarife starts by explaining that it is not supposed to be called a high tea as it is commonly referred to in Australia. In the 18th century, high tea was for workers and labourers who finished work at 6 o'clock. High tea was a hearty meal. However afternoon tea was a lighter meal served between 3-5pm. It came about as there was a long period between lunch and supper which was typically eaten at 9-9:30pm. According to Zarife, it started with Queen Victoria's bed chamber lady Anna Marie Russell or the Duchess of Bedford. She would eat bread and butter in the afternoon which is a tradition that Queen Victoria liked the sound of. She in turn made it into a formal event where ladies would wear long gowns and gloves. 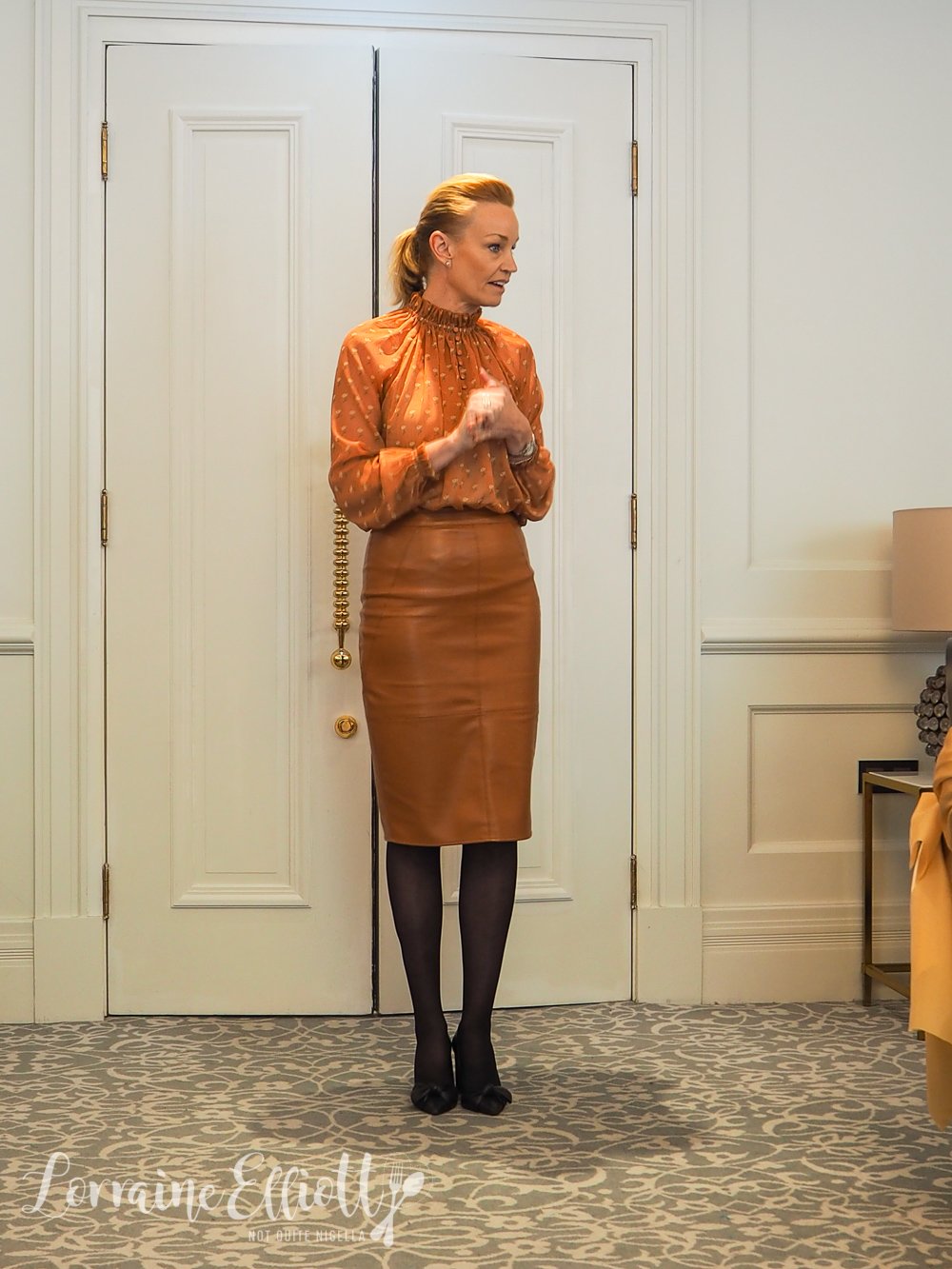 Zarife explains that Queen Victoria was a tea connoisseur and if the tea wasn't to her liking she would throw the cup across the floor. Her favourite tea was Earl Grey, (which is incidentally also Queen Elizabeth II's favourite tea).

Queen Victoria was a strong willed woman who also liked a daily outing in the fresh air. It didn't matter about the weather and she and her servants would leave no matter what the conditions. The servants would have to find an area to make her tea while she sat in the carriage. 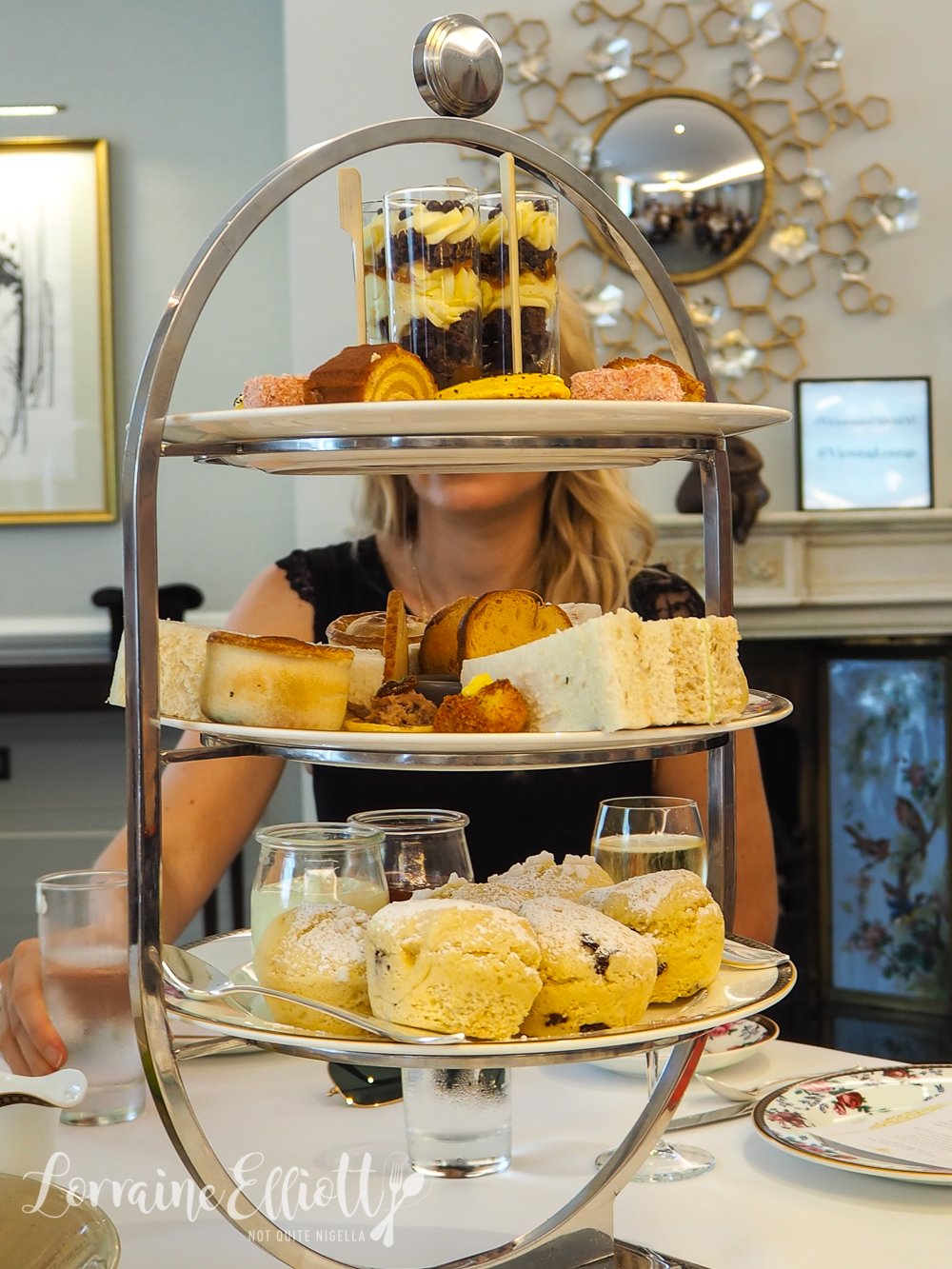 Once you sit down, you place your napkin on your lap. The fold sits closest to your body. Always keep our napkin folded and make sure that other people never see the napkin. If you need to use it, take the corner and dab it to the corner of your mouth. When you leave the table, the napkin should be placed on the back of the chair. When you are finished the meal it goes to the left of the setting.

Posture is also important as it shows confidence and polish. An old trick was to place a boiled egg at the back of the bottom. Your bottom sat at the spot where the boiled egg sat. This way you were never to use the back of the chair. Zarife explains that when we use the back of the chair we become sloppy. "We need to use our core strength," she says. The royal position for legs are knees together, ankles together straight down or there is also the "Duchess slant" where your legs are positioned diagonally across.

For afternoon tea you are typically given a fork, knife, spoon, teacup and saucer. Bases of the cutlery are placed on the table 2cm from the edge. Once cutlery is used, never place it back on the tablecloth. Usually they don't use cutlery for afternoon tea as it should be bite sized but if the pieces are too big you can use the knife to cut through them.

And to pinkie or not to pinkie? Absolutely no pinkies up says Zarife. The reason for the pinkie was that in Roman times when you ate finger food, you were only supposed to hold the food with three fingers, thumb, index and middle fingers. Using five fingers made you a commoner. To pick up a teacup hold your index finger and thumb go through the handle and make sure there is no hooking.

And is it milk or tea first? Tea is the correct way. In Queen Victoria's time the servants drank from clay cups but if you poured hot tea in a clay cup, it would break so they used milk as a coolant. 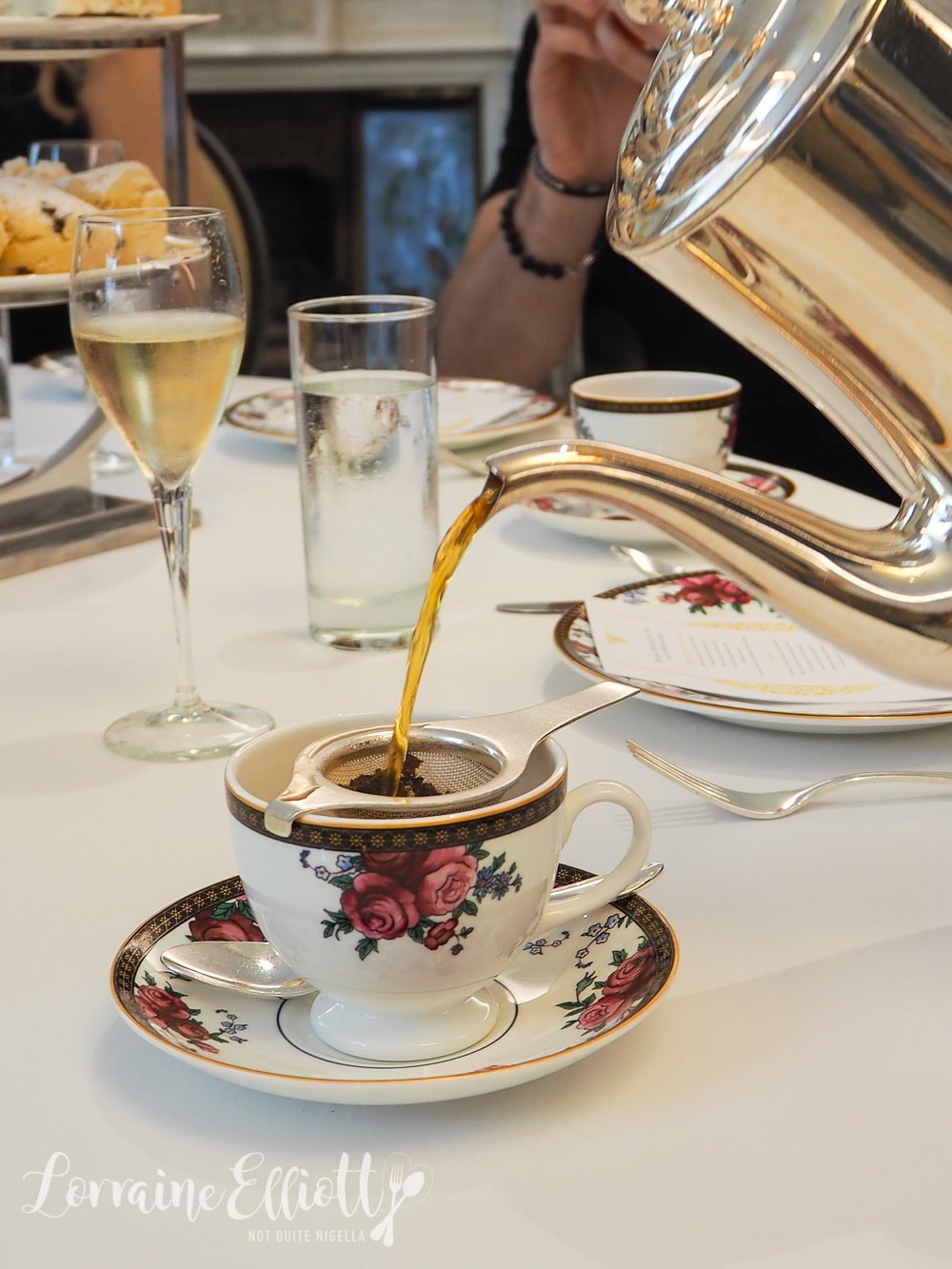 To make tea with milk and sugar, place your sugar cube and then the tea and milk to your liking. Let the tea brew for 3 minutes up til 6 minutes maximum. If you add lemon, then add that first then tea and no milk.

The correct way to stir the tea is to gently move the spoon backwards and forwards in 6 to 12 clock position with no swirling. After that, you give the spoon a gentle shake and then the teaspoon sits at the back of the plate. However at The Langham the teaspoons are on the right side which is the French way.

There are three types of teas: 1. Cream tea which is scones and tea 2. Afternoon tea with a selection of sweet and savoury and 3. Royal tea which is the afternoon tea served with champagne.

If you are the host, you pour the tea for each person individually around the table. Do not line up the cups and fill them, go up to each person. And when you drink your tea, look into the teacup, do not gaze over at someone over your teacup. 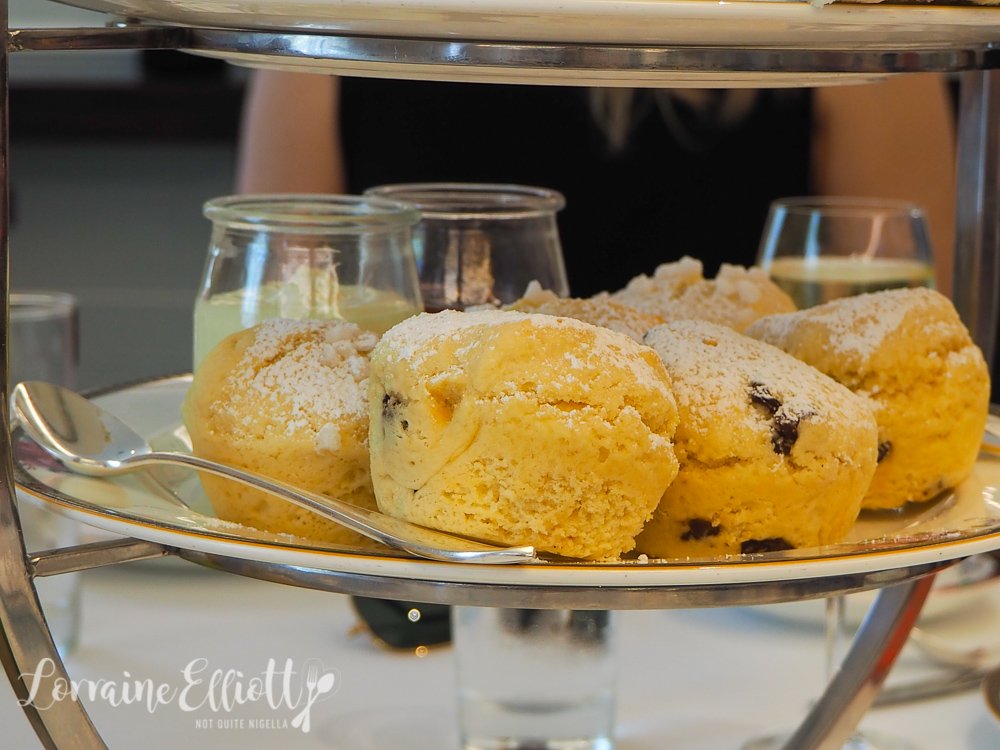 Now onto the food! Traditionally at afternoon tea you would start with savoury, then cake and then scones. But Zarife explains that some people like to eat the scones warm so they eat them first and that is perfectly fine. Queen Victoria's favourite accompaniment to her tea were shortbread biscuits. She openly loved all types of food and admitted that she was morbidly obese. She also ate incredibly quickly. A rule of royal etiquette is that you are not to start eating until the Queen starts and you must stop as soon as she finishes. In the film Victoria & Abdul there is a scene where guests ate very quickly to keep up with the monarch. You were also not allowed to leave until the Queen left.

Scones are not to be cut, you twist them in half and pull them apart. If you are sharing your tea, put some cream and jam on the side of your plate. Cream vs jam first? Whatever you prefer. Queen Victoria preferred cream first and then jam. You never sandwich them together. And by the way, it's pronounced skon, not skoen. 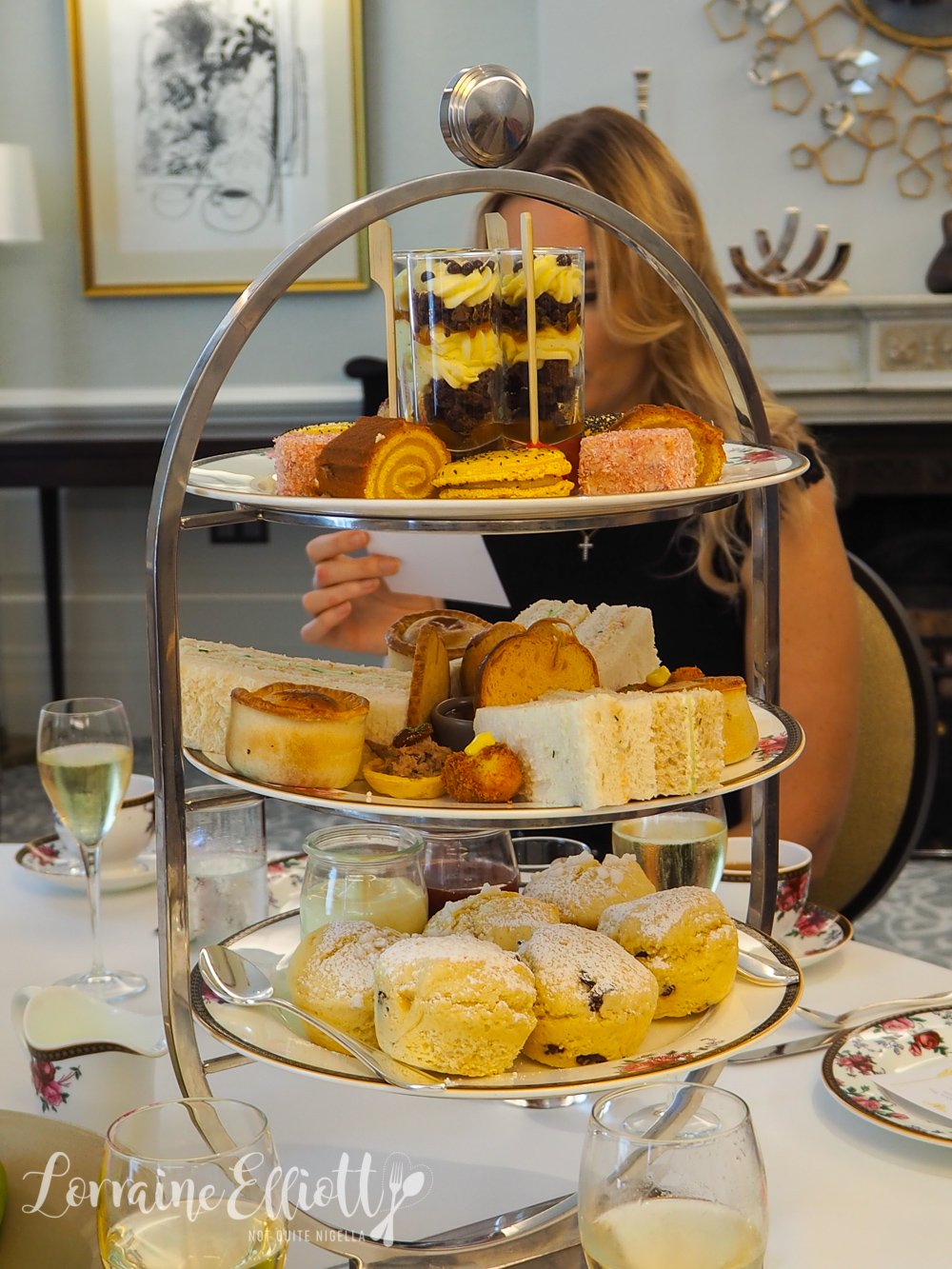 And what is the best thing to do if you don't like the food? The rule is you must try it, even one or two bites but to leave the food untouched is considered rude.

Food is also about conversation and Zarife suggests asking questions like "What was your highlight of the day?" as it's a positive question and makes people think. Don't ask too many questions and conversely, don't give one word answers. Always listen to the answer and conversation should flow from there. When conversing, use micro expressions and eye contact to communicate interest. Things like raising eyebrows and nods lets the person know that you're listening and engaged.

That brings us to a modern modern day malady: the mobile phone. Zarife says that she is interviewed at least once a week about the subject of mobile phones. Phones should always be put away when you're face to face with someone. If you have forgotten to turn your phone to silent and it rings, say "excuse me" and turn it off, don't answer it. If you are expecting a very important call let your fellow diners know beforehand that you may have to step away and if the call comes, take it outside. Zarife explains that part of the reason why people are so annoyed at others taking calls is that one speaks three times louder when on a phone.

As for the newest and sparkliest royal Meghan Markle, she has entered life as a royal with all of its etiquette rules. She has no doubt learned that royals are not allowed to sign autographs or shorten their names. They must also give up their jobs. They must also always travel with one black outfit in case of a death and they must look immediately respectful.

But of course the whole point about etiquette is to make people feel comfortable and not anxious. When Queen Victoria had overseas dignitaries as guests, some Asian dignitaries used the finger bowls to drink from. So she followed suit to make her guests feel more comfortable!

So tell me Dear Reader, do you think etiquette is important? Are there some rules that you follow and some that you break? And what do you think of the upcoming royal wedding? Will you be following it?

NQN attended afternoon tea as a guest of Victoria & Abdul but all opinions remain her own.