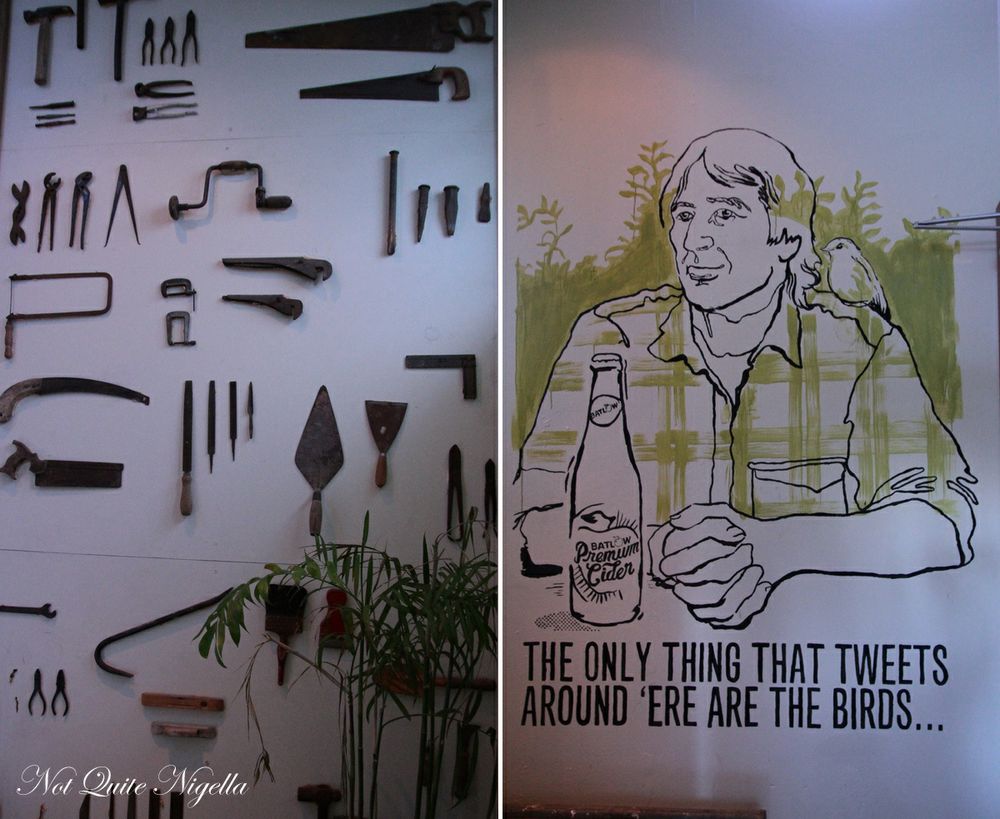 I was in unusual territory. Not Bondi, that's familiar enough. Not a Hardware store, although that is one type of shop I find confusing, but I was in unfamiliar territory doing a little mischievous matchmaking. It occurred to me one day while getting ice cream with my hairdresser, the gorgeous Elly from Stevie English Hair, that she'd be a good match for Mr NQN's brother Manu. She was sporty, easy going and also from the country and it seemed almost too good to be true. So we arranged for a double date at Bondi Hardware. 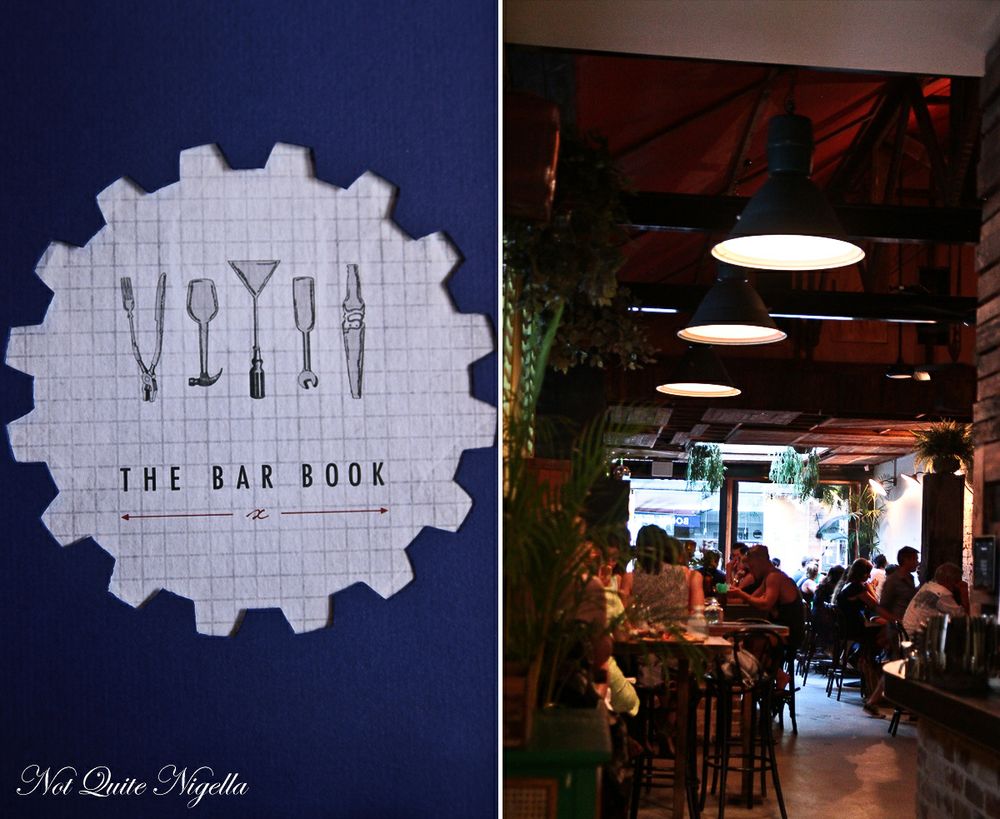 Even though it's a Monday night, things on Hall Street are busy with people but I guess that's Bondi during warmer weather for you. Bondi Hardware is themed, all of it referencing its earlier incarnation of a hardware store. Tool boxes and tools line a wall while on tables wooden boxes house cutlery. There's a skylight at the front and a bar on the right and there's a lot of timber everywhere and menus are clipped onto wooden boards. The menu items are marked vegetarian and gluten free where appropriate. 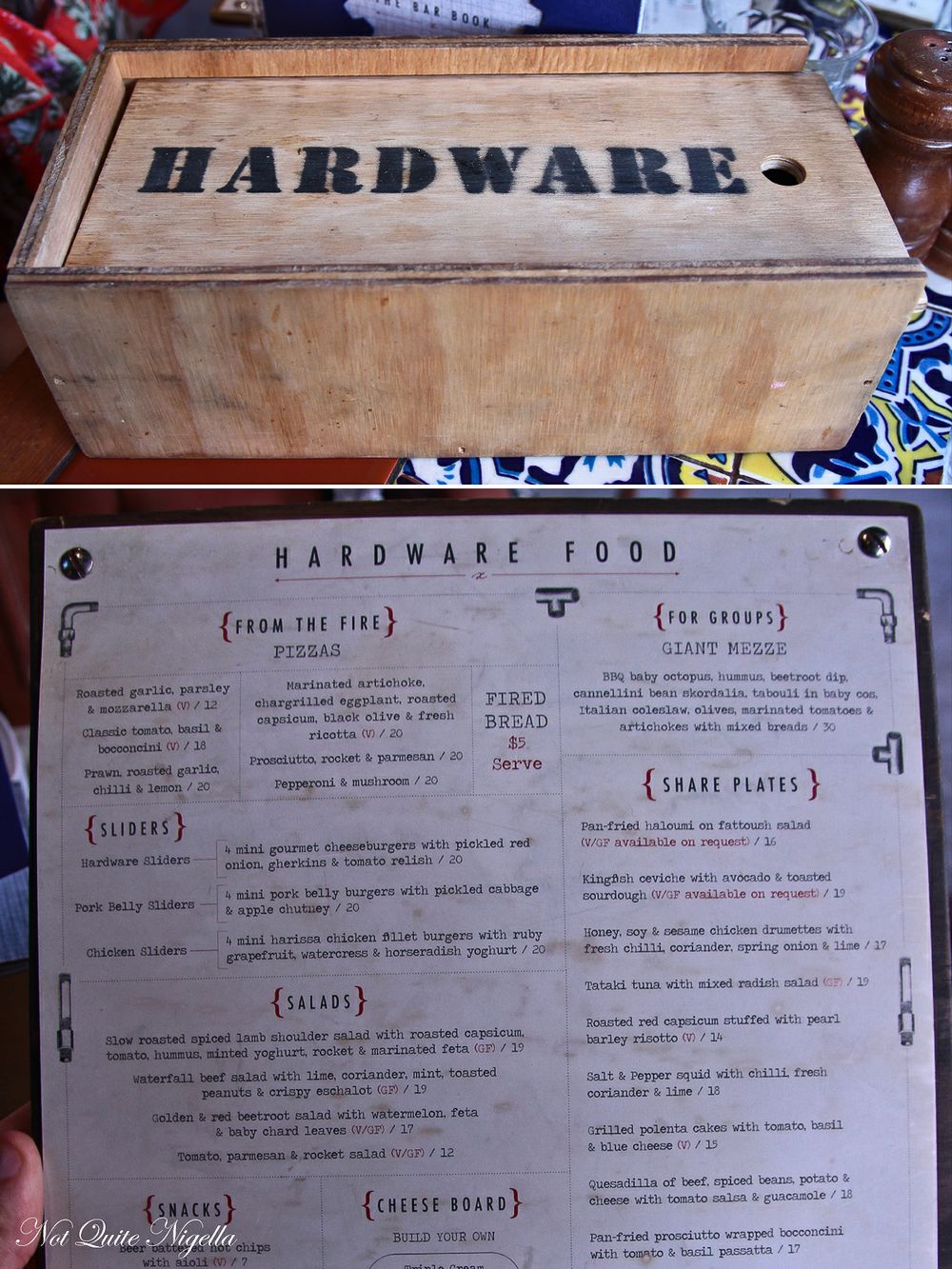 We're too busy trying to encourage conversation between Elly and Manu to look at the menu and the poor waitress comes back three times for us to get our order. I've never been part of a double date with a blind date by the sleight of my own hand so I feel just as nervous as these two might! 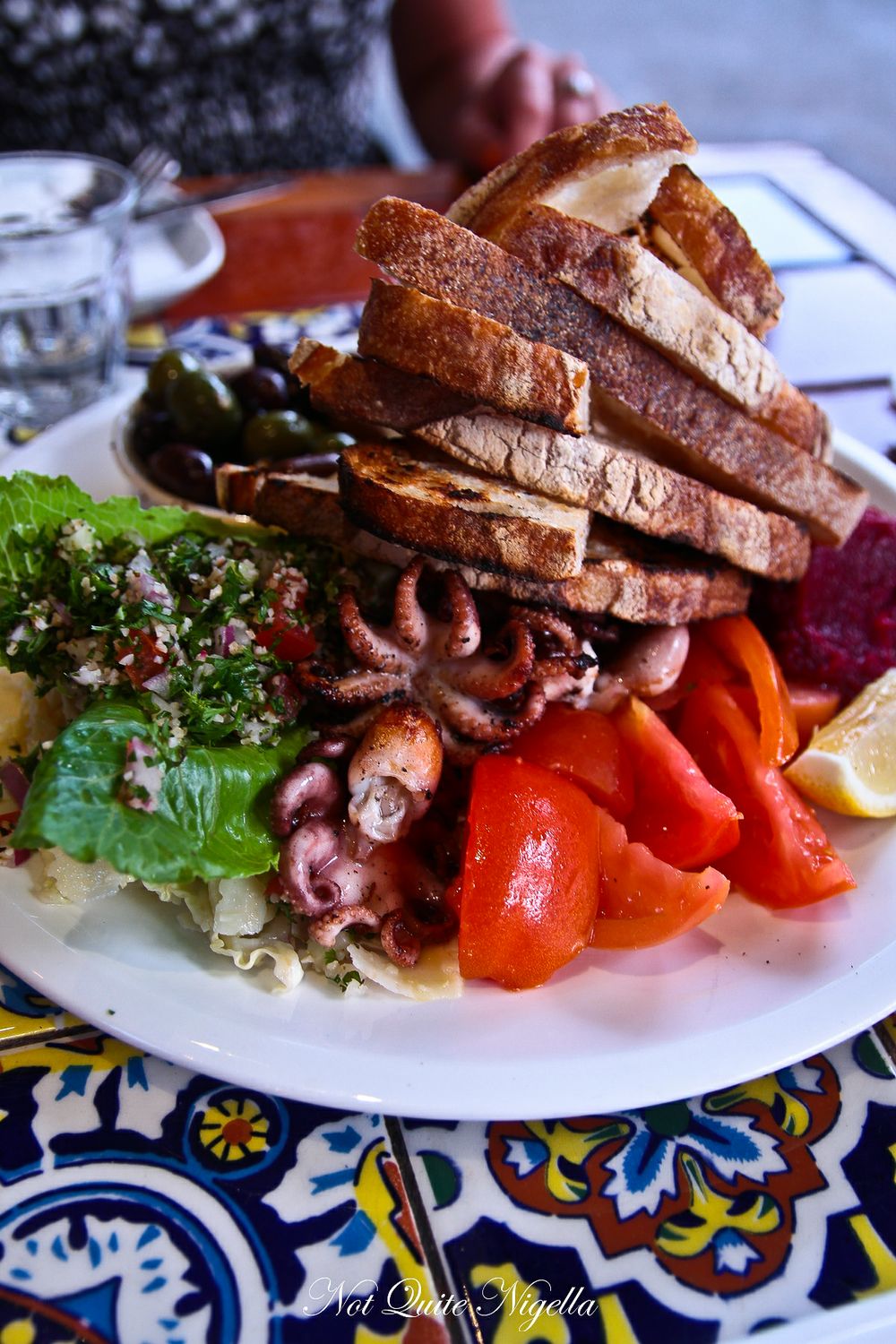 Manu is a vegetarian with a big appetite so we order some items that he can have and will fill his hungry self along with some for the rest of us omnivores. The giant mezze was ordered to fill that yawning chasm but this and the other food has quite a long wait. When it arrives, it is really very large indeed and it's hard for even the two hungry boys to finish.

There is a nicely charred bbq baby octopus, beetroot dip, red capsicum dip, cannellini bean skordalia, tabouli in a cos leaf and an Italian coleslaw that is tangy and dressed in an olive oil and vinegar dressing rather than a creamy one. There is also plenty of lightly toasted bread, olives, tomatoes and marinated artichokes. The selection is good and mountainous and even by the end and having been nibbled at by hungry boys, they're still unable to finish it. 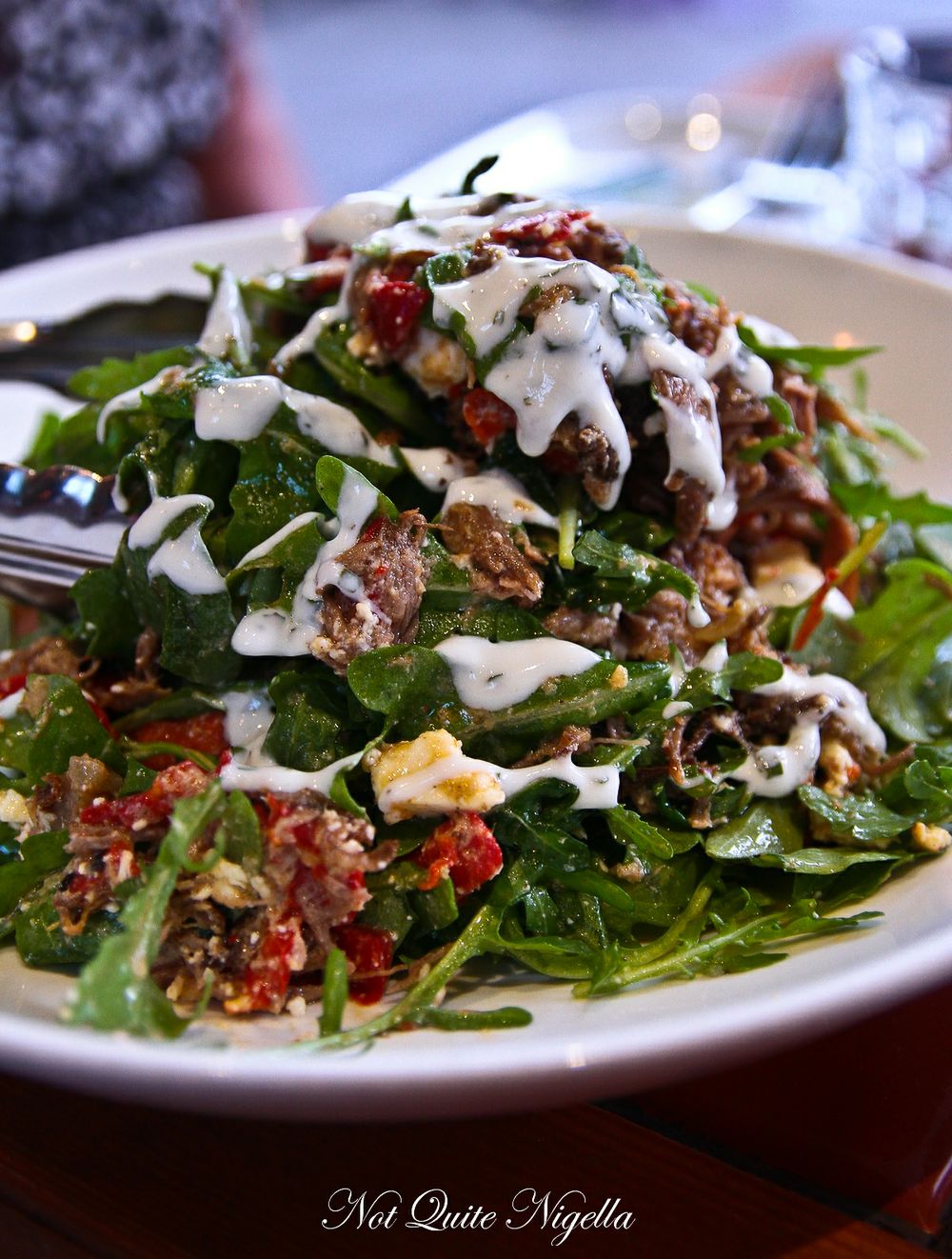 This was the waitress's recommendation and we really enjoyed this salad which was a tumble of shredded slow roasted spicy lamb shoulder, tomato, roasted capsicum, hummus, minted yogurt, rocket and marinated feta. It was all tossed together well and with just enough of each ingredient. Half way through, it's really quite rich though and I was hoping for some acidity to balance the salad's richness, particularly if you weren't sharing this (although all of the dishes are designed to share and come with tongs). 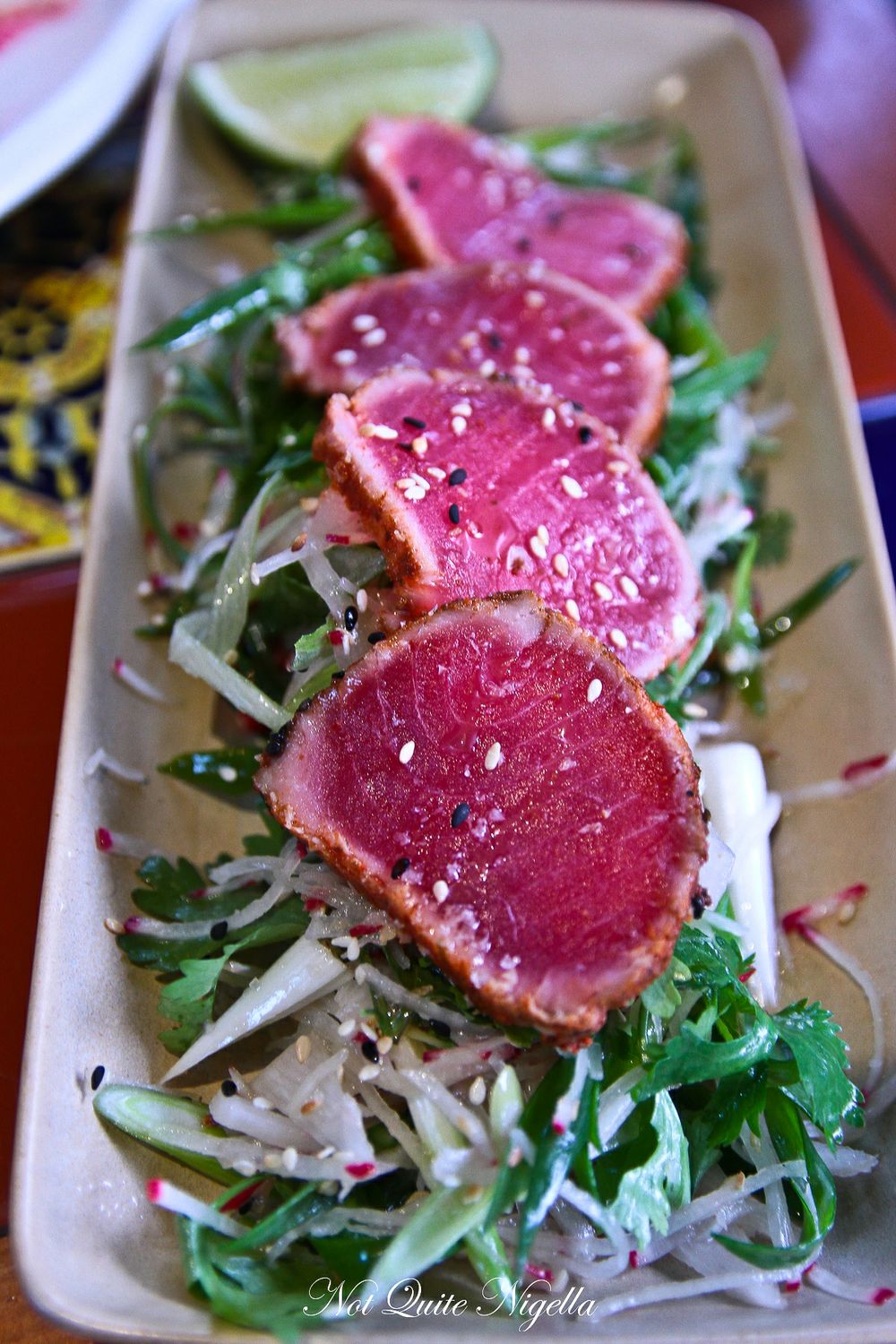 Smaller and more delicate than the lamb salad was the tuna tataki which was seared and crunchy on the outside and soft and pink inside. It sat on a dressed radish and shallot salad which was dressed in a Japanese style dressing which suited it so well. 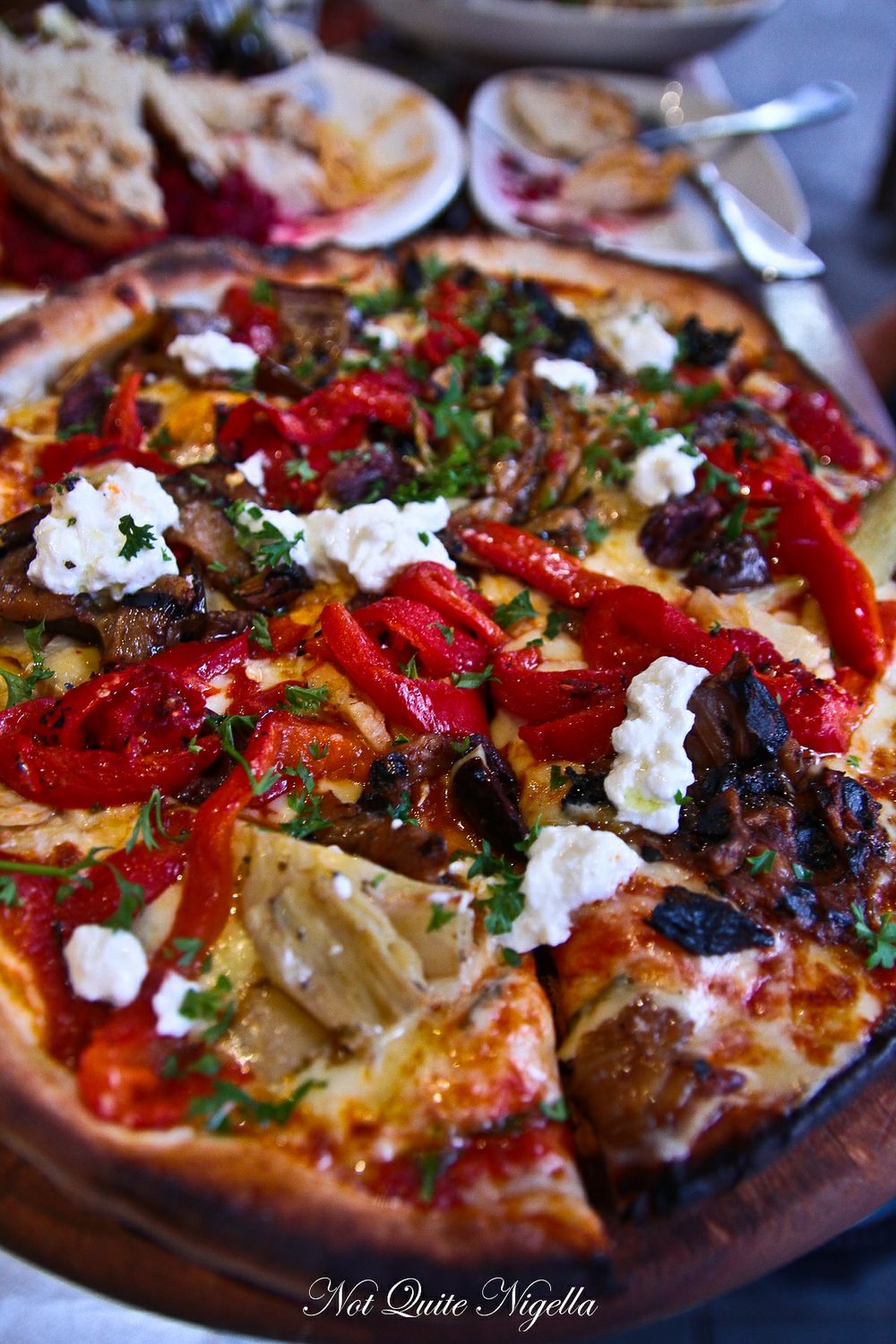 Half of the pizzas on the pizza menu are vegetarian and this one sounded like it had a good mix of vegetarian toppings. The thin crust is excellent and the topping plentiful but not too much or too wet. I should have asked for some garlic on this though as I think that it really peps up vegetarian pizzas. 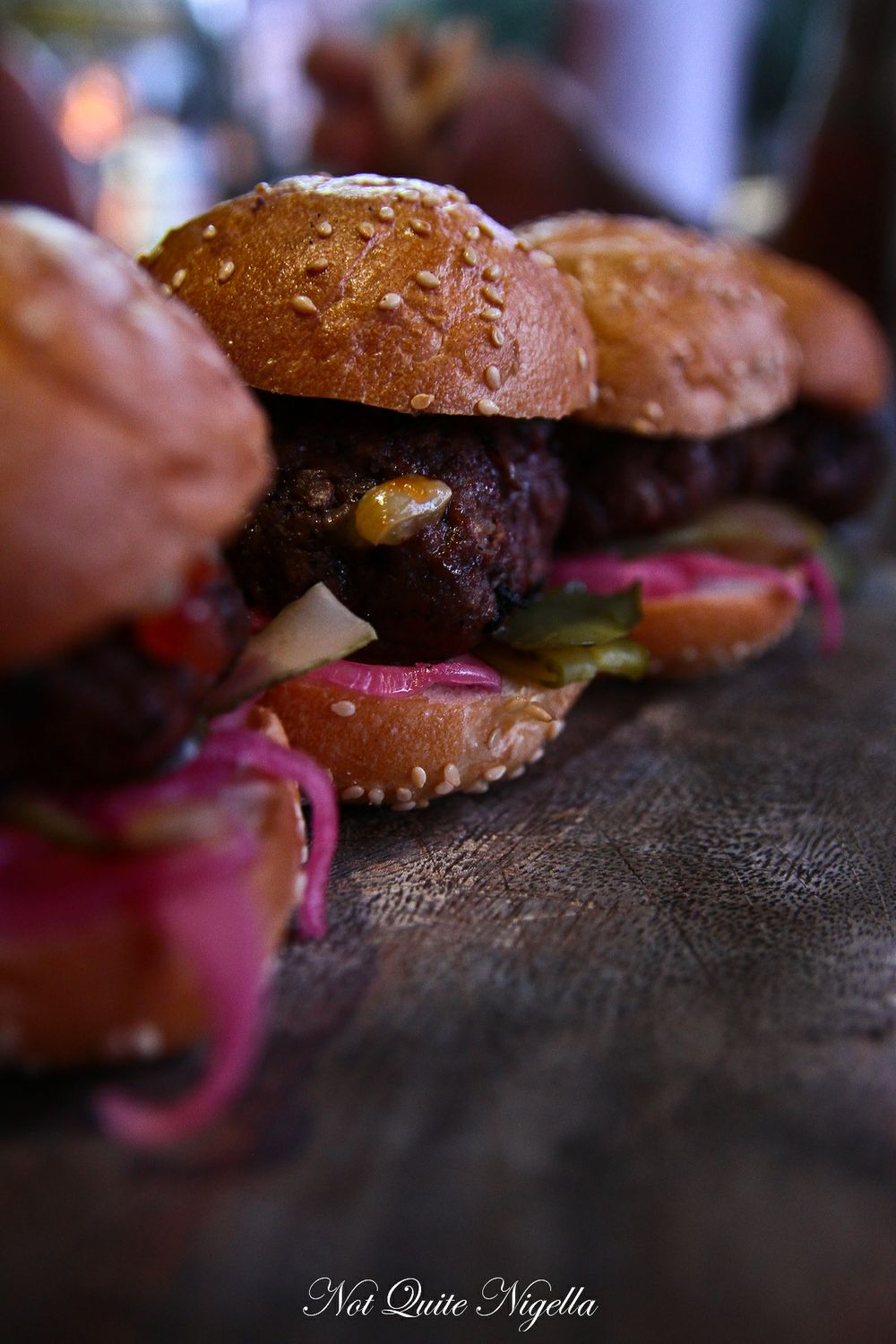 There are three types of sliders: pork belly, chicken and the house slider called the Hardware sliders which is a beef burger. They come four to a serve and take a bit longer than the other food to come out. When they set these down on the table, I think all of us had forgotten that we had ordered them. They're cute little mini burgers and whilst I like my burgers a bit saucier with a bit more salad, the buns are soft and the pickled gherkins, pickled red onion and tomato relish give it much flavour and texture. 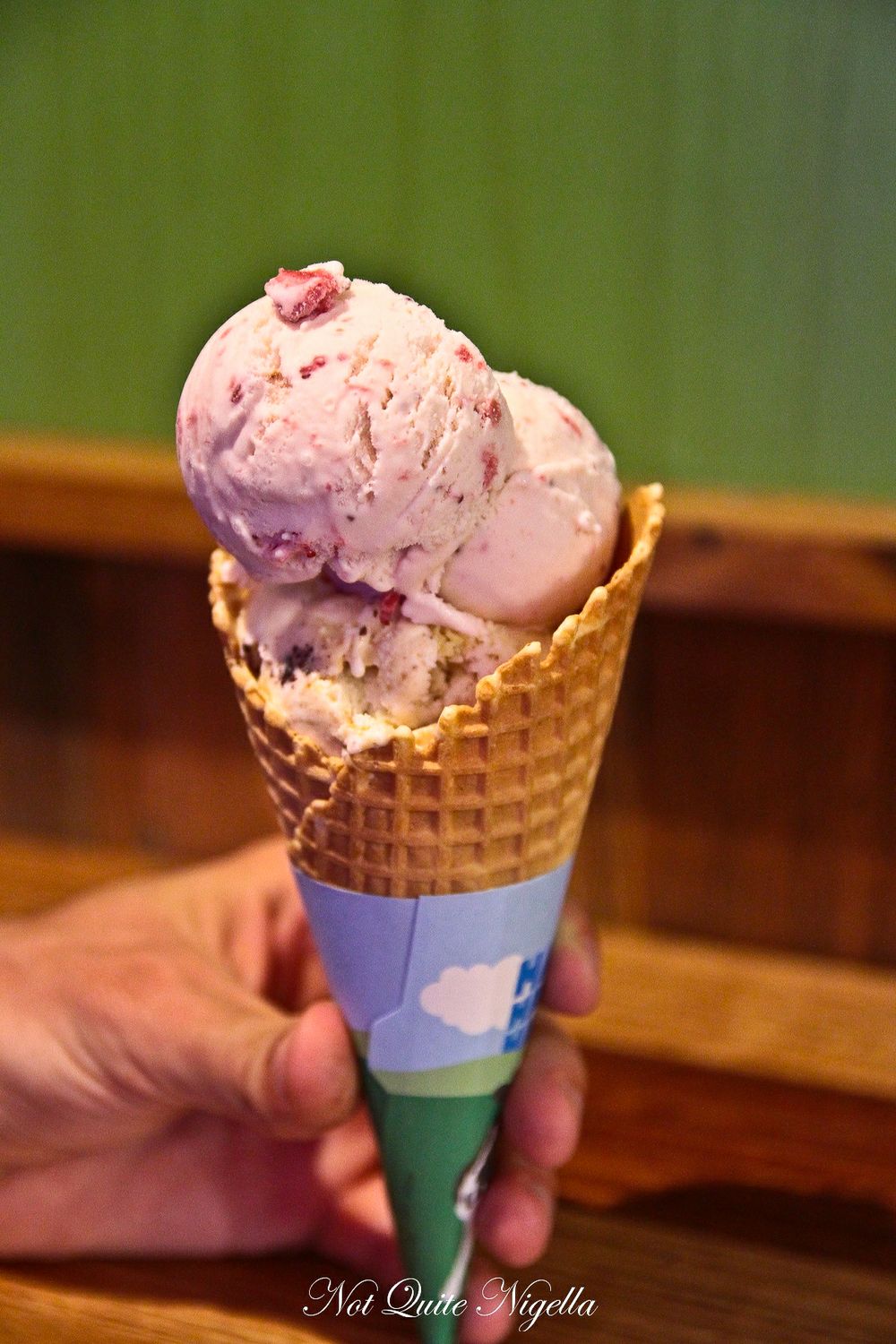 Alas, it was so hot that whilst we'd normally dive for the salted caramel baked brownie, we were just thinking of ice cream. We're pleasantly surprised by the bill-even though we didn't have dessert, it ended up being $30 per person including a tip. And two very stuffed boys! But of course being Bondi, we couldn't let the opportunity pass to have ice cream so we meander down to Ben & Jerry's for some ice cream-strawberry and seven layer coconut bar for Mr NQN. I was going to try the deep fried Mars Bar next door as I've never tried one (I know!) but alas they were closed by the time we finished, they're shut! I guess my deep fried Mars Bar opportunity will have to wait...

Edited to add because readers were curious, Elly and Manu got on well and went on another date but are now just friends :) I'm still looking for a sister in law and girlfriend for Manu! 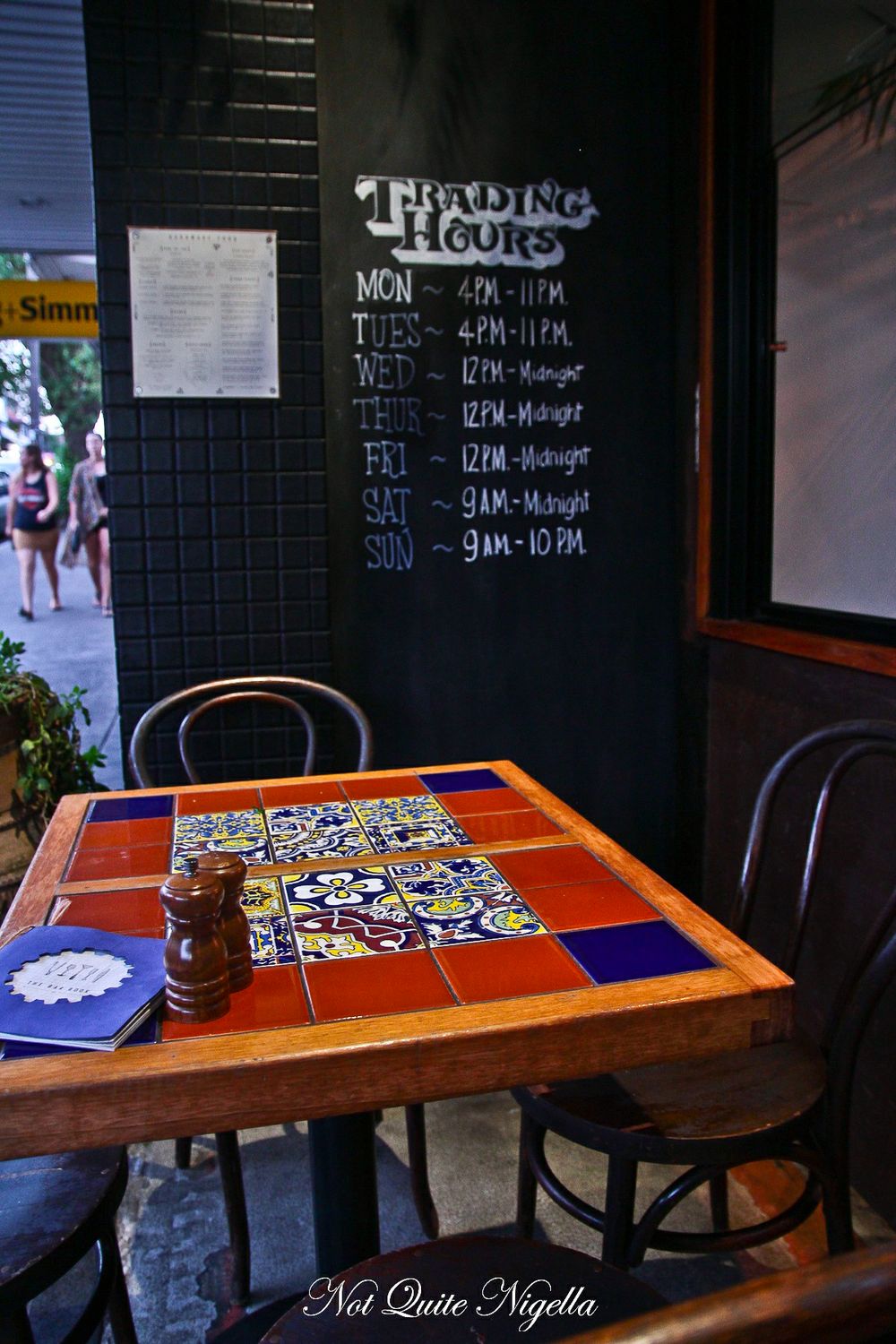 Saturday 9am to midnight