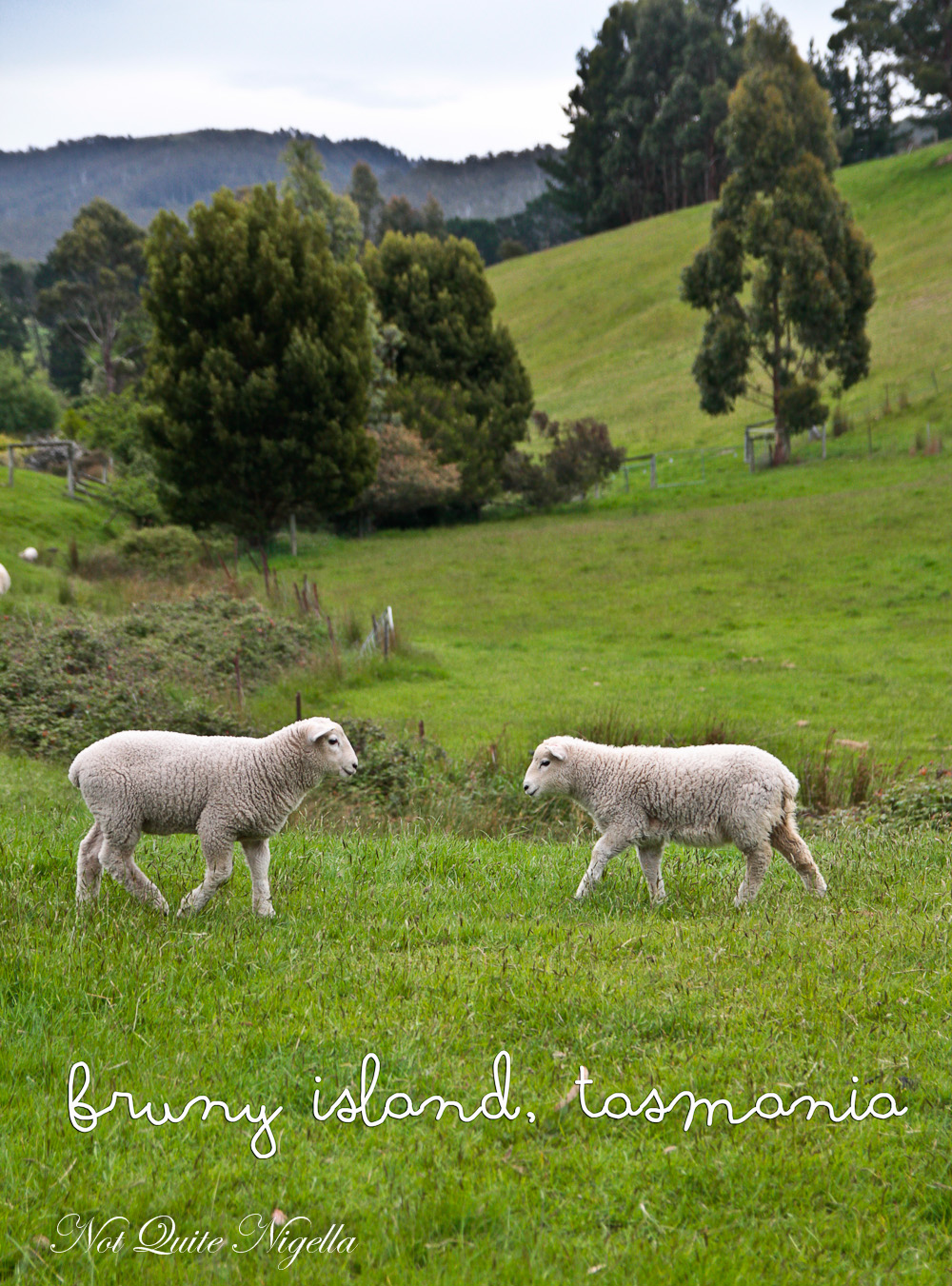 The mother sheep stands by her tiny, woolly baby lamb. They both stare at us unblinking and behind them, other mother and lamb pairs strike similar poses against the green grass. Later that afternoon, an echidna quickly waddles across the road while a family of ducklings make the same crossing several streets away. The flora is made up of rugged surfaces, eucalypts and rolling green pastures. We are on an island within an island - Tasmania's Bruny Island. 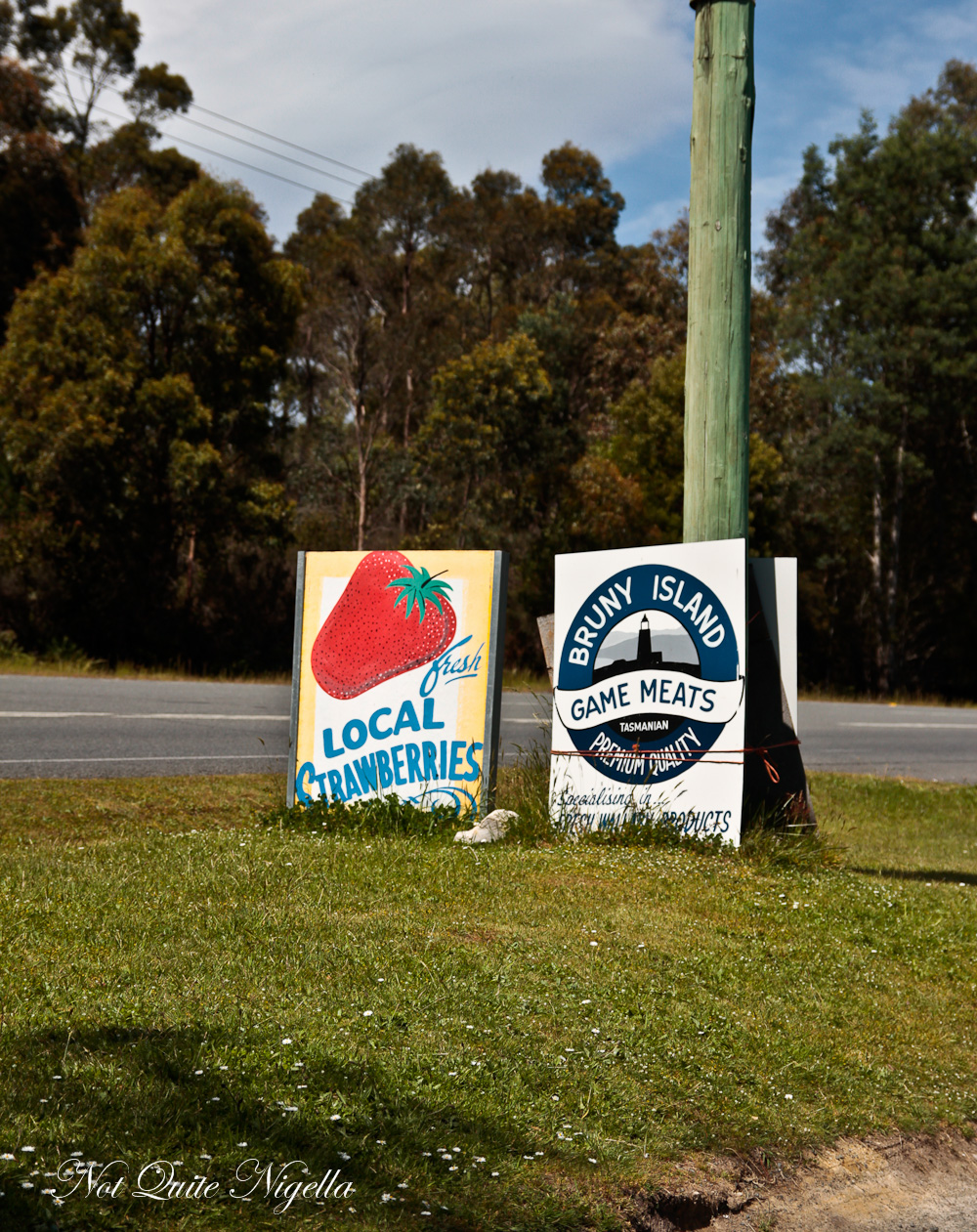 The island is set south east of Tasmania and has just over 600 residents but during Summer season the population swells to the thousands with visitors and holiday home owners. Named after French explorer Antoine Bruni d'Entrecasteaux it is separated by the d'Entrecasteaux channel. Bruny Island is actually two land masses called the North and South Bruny joined by a narrow piece of land called "the neck". 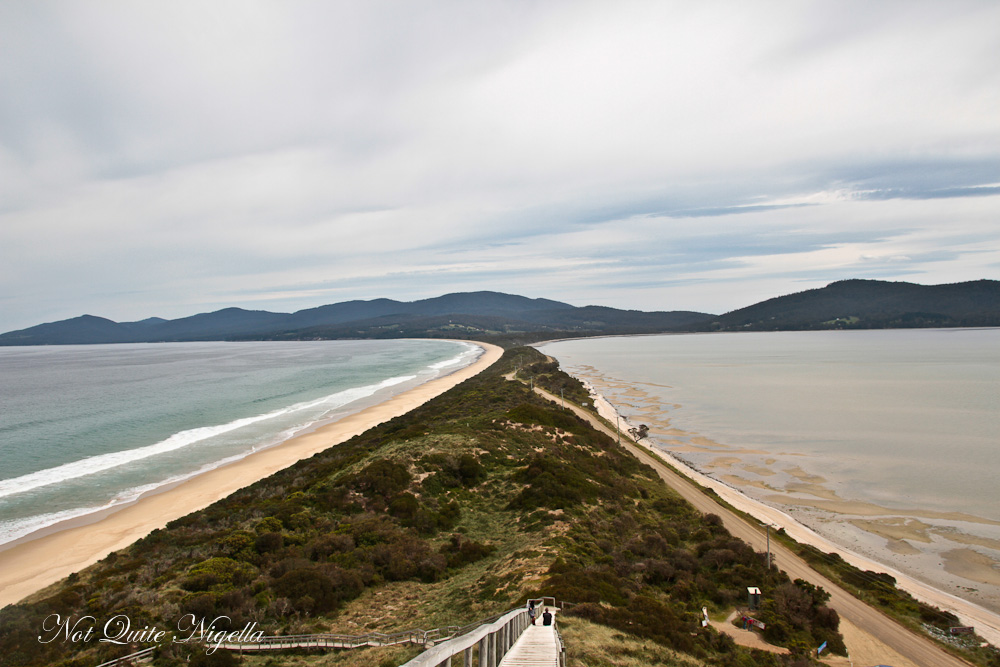 Life on Bruny Island is its own little community with its own ecosystem. An impressive array of food is harvested here including oysters, pork, lamb and the island also boasts a cheese factory and smokehouse. 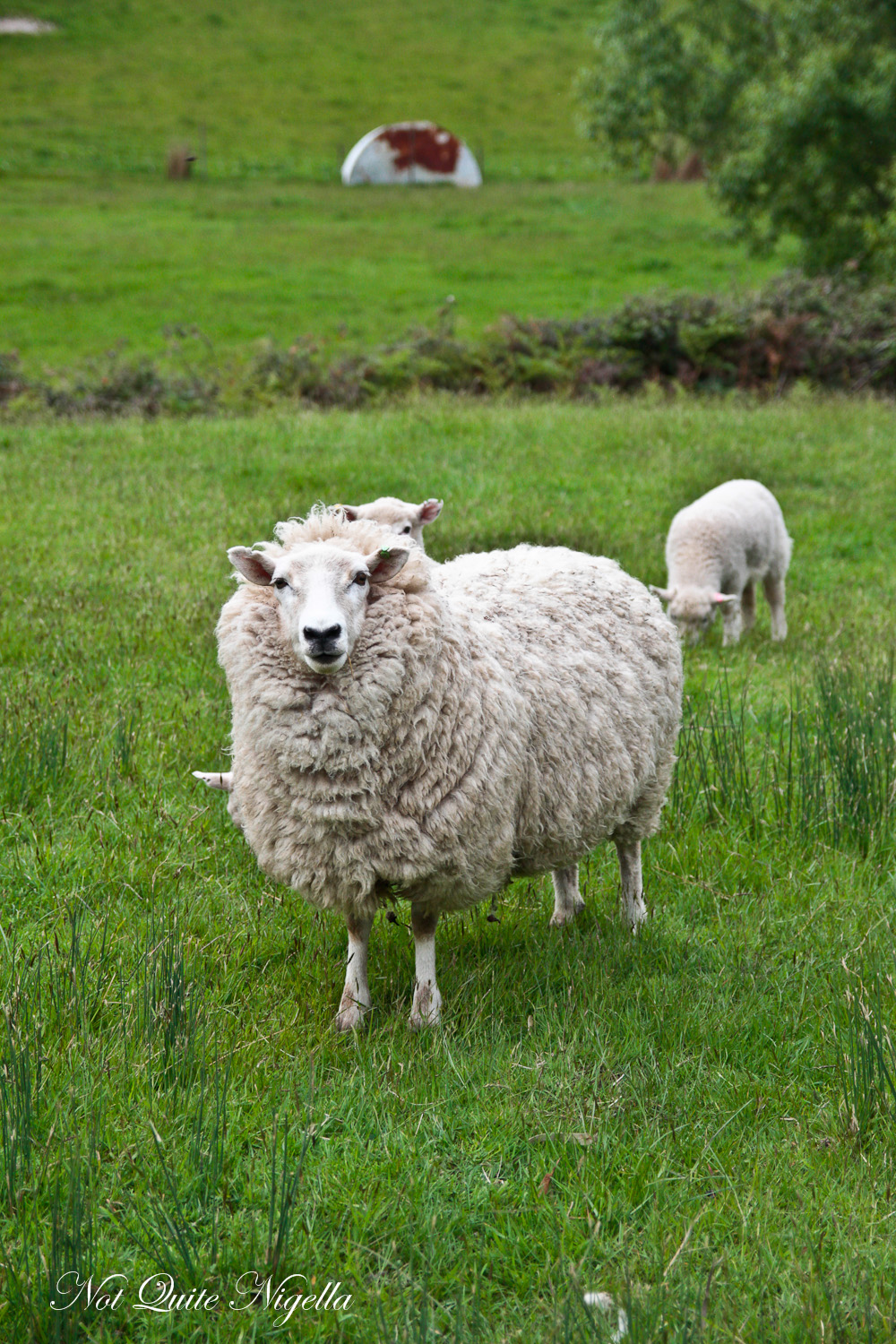 The journey to Bruny Island starts by ferry at Kettering, about 30-40 minute's drive from Hobart. These leave roughly every hour with the last ferry departing for the return journey back to Hobart at 7pm. If you arrive earlier than expected, a drive around the Peppermint Bay area and beyond is scenic. Most visitors drive their cars onto the ferry and drive off half an hour later and explore the island by car - it's too large to navigate or explore on foot. 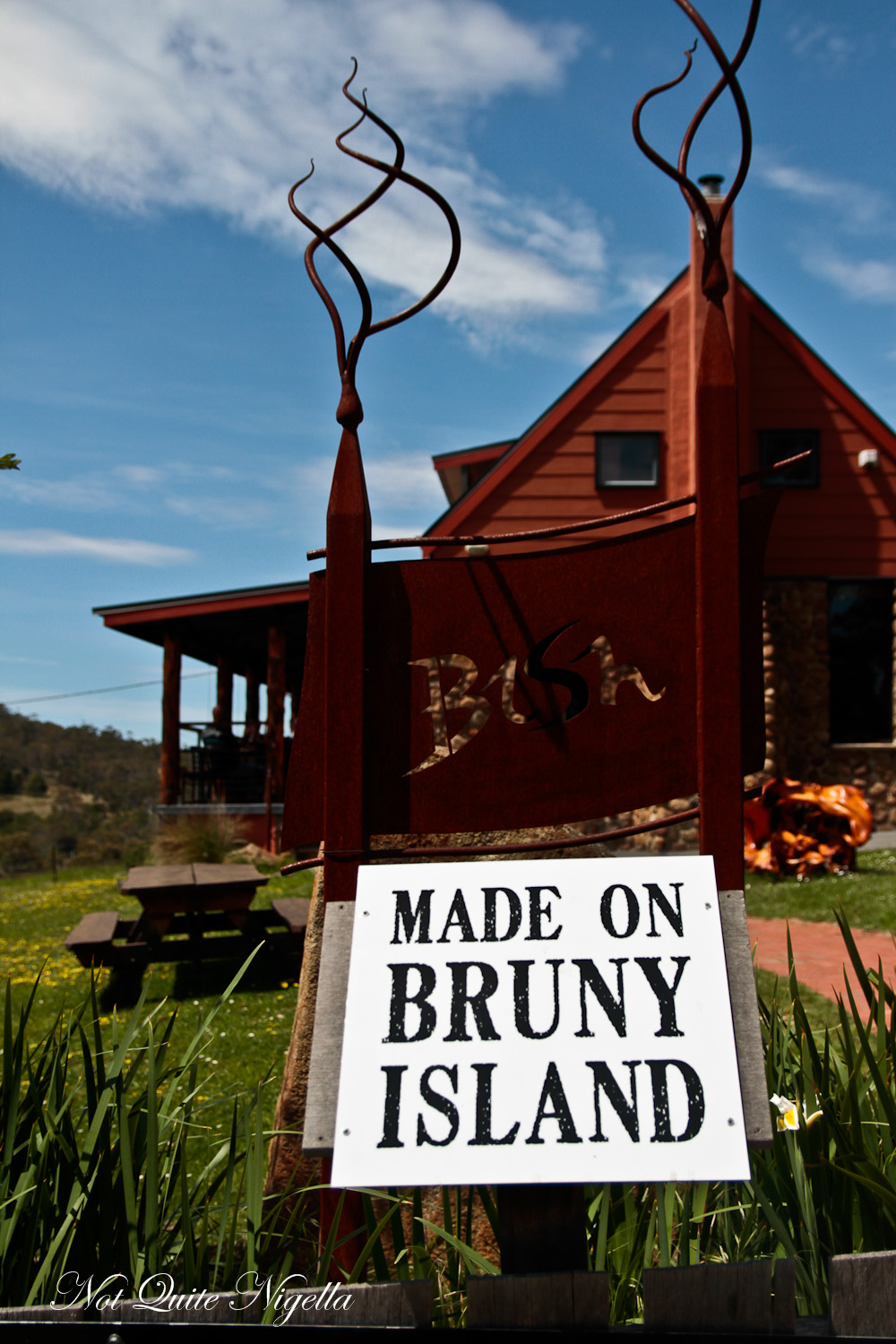 We're meeting John Bullock, who is the island's baker who also works at the cheese factory. My visit with him came via one of my fabulous readers Jaqi whose sister is John's partner. Her descriptions of Bruny Island convinced me that I had to go and she helped facilitate the meet up. But before we meet him, we pick up some provisions of Bruny Island produce. Our first stop is at the Bruny Island Smokehouse (or BISH), just a few minute's drive from where the ferry docks. Customers here can try a range of their smoked trout or salmon, dips, chutneys, whiskies and meads. 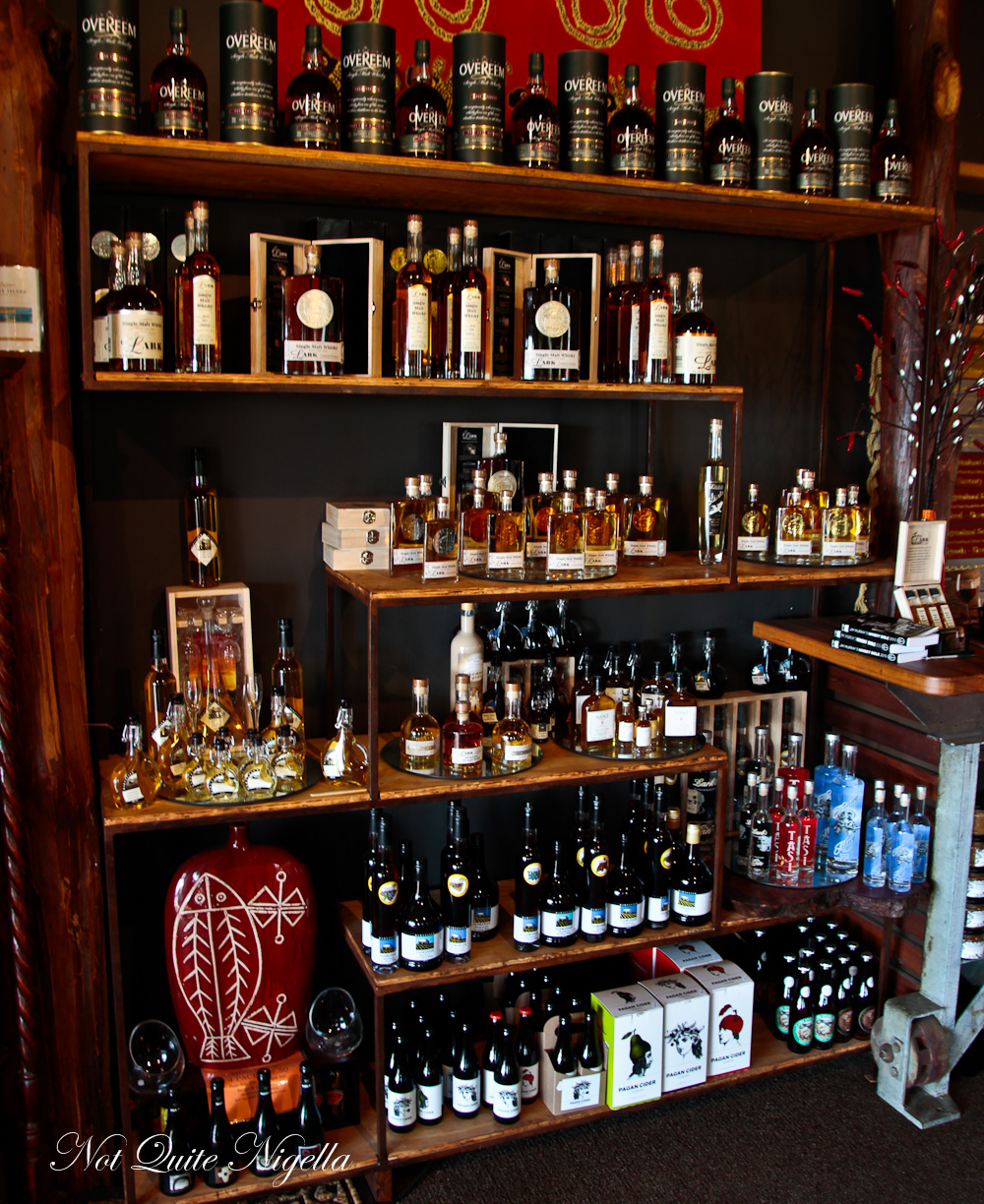 We sample everything and the standouts are the salmon dip which we buy for $12.50 and the spiced apple honey mead is a lovely drop too. It's sweet certainly but with a swift kick at the end. 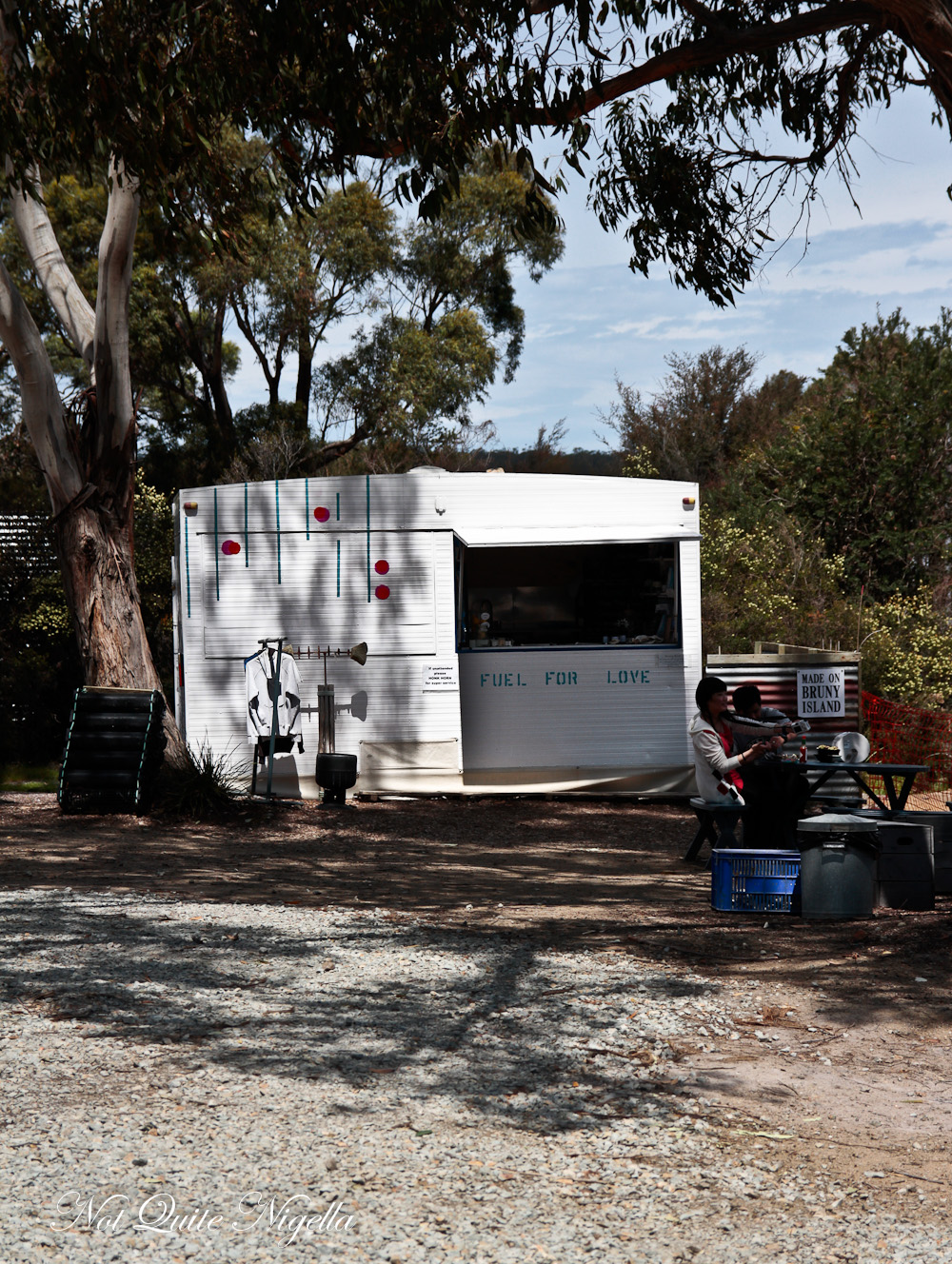 Our next stop is at Get Shucked Oyster Farm which is currently a rustic looking caravan whilst construction looks to be underway for a new retail area. Here the slogan "Food for Love" makes perfect sense for these supposed aphrodisiac bivalve molluscs. 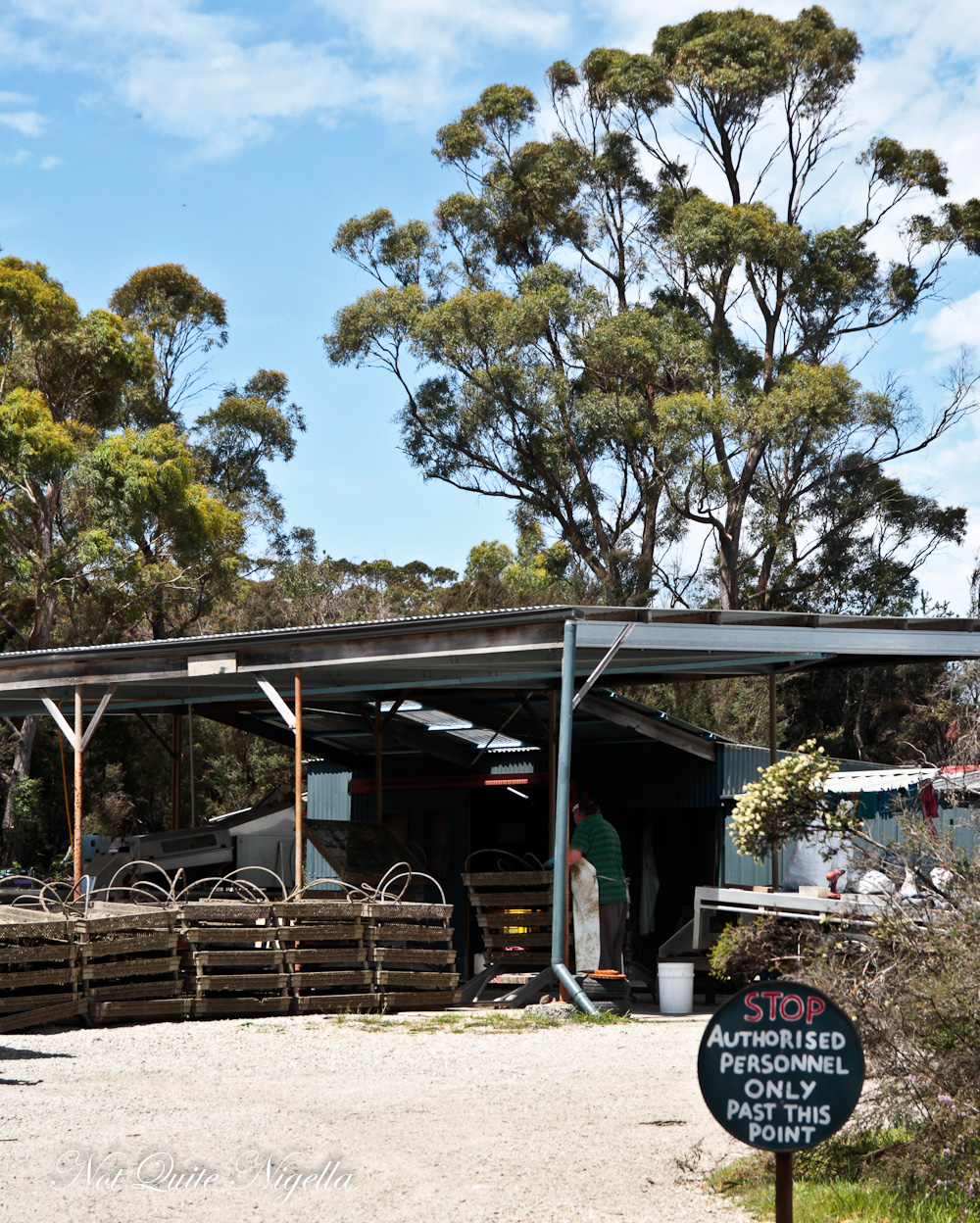 Here you can buy them either shucked or live and unshucked. Shucked are $12 per dozen while unshucked are $8 per dozen and we order two dozen live unshucked oysters which they pop into a plastic bag for us. Oyster knives and other acoutrements are also sold as well as a range of flavoured beers in chilli, ginger and lime. 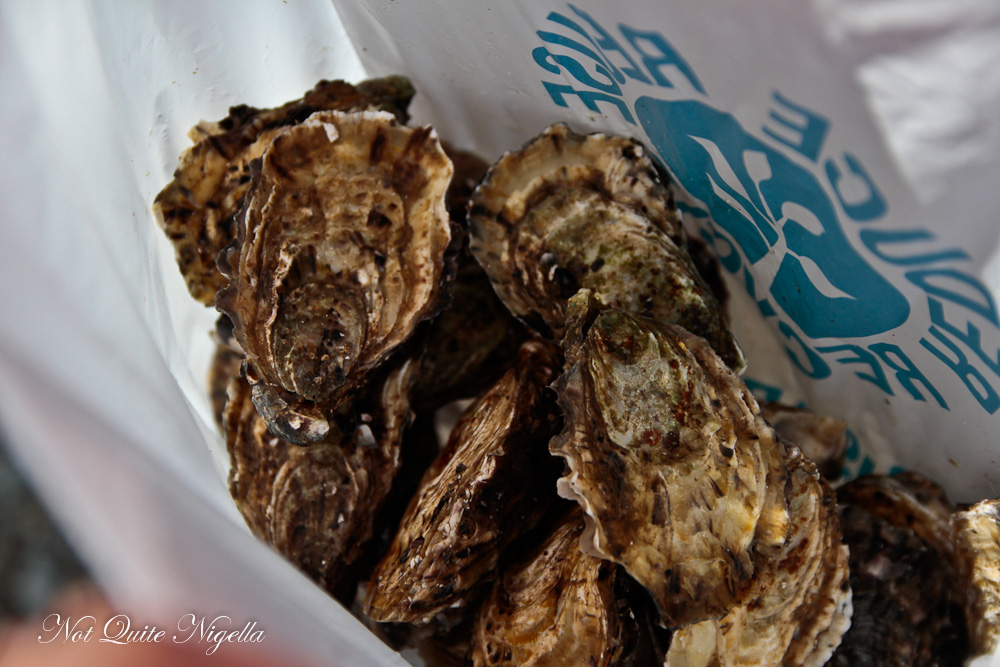 We meet John at the cheese factory where he is busy conducting tastings. The Bruny Island Cheese Co. with its distinctive gumboot logo is the only legally recognised company in Australia that makes raw milk cheese. To achieve this, they've partnered with the Tasmanian Dairy Association and produced a hard cheese using raw, unpasteurised milk called Raw Milk C2. 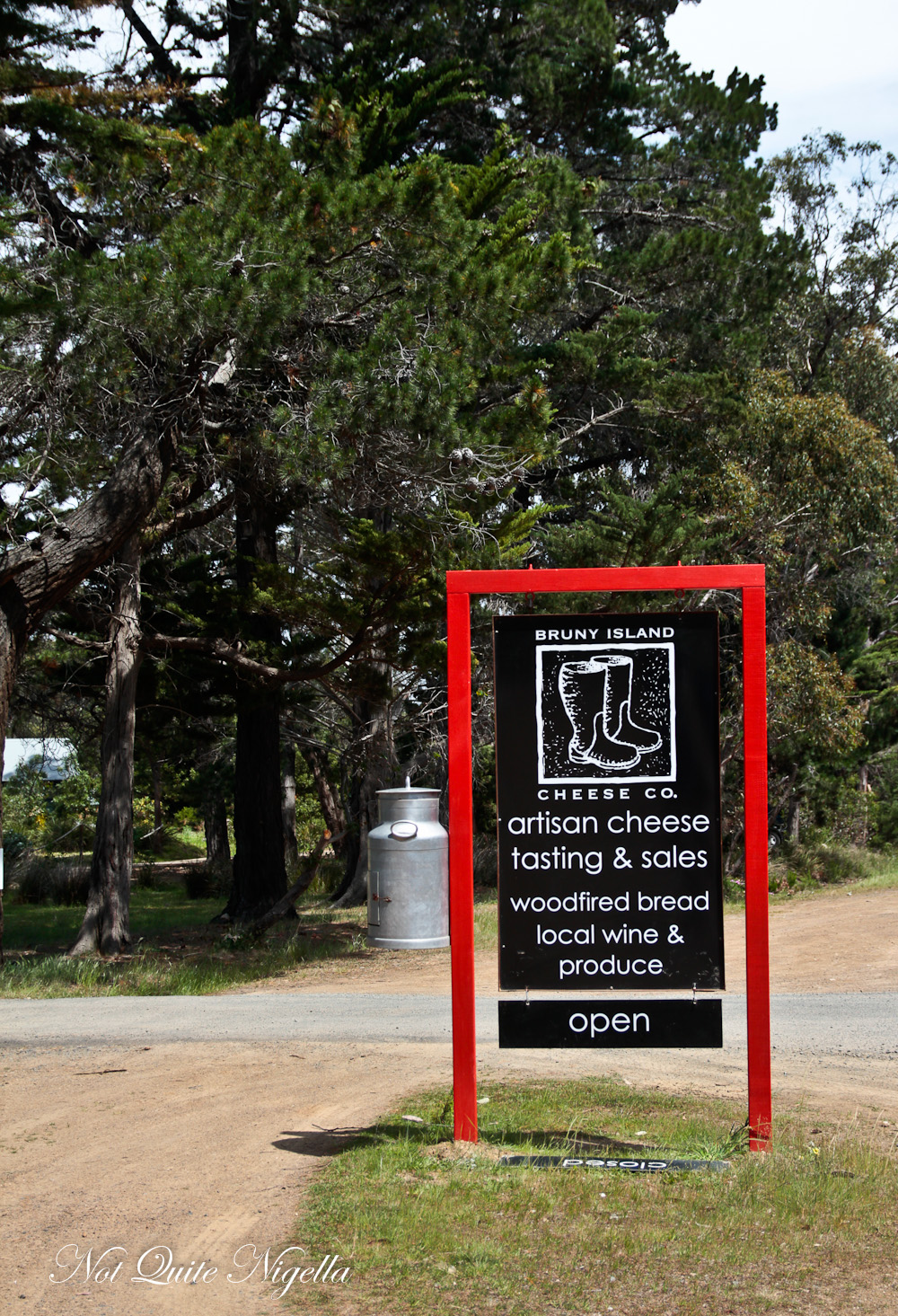 They have two farms near the Derwent River that supply them with 100% of their milk. Founder Nick Haddon seeks to create a relationship between the company and the consumer so they do markets, shows and a cellar door rather than sell through a middle man. 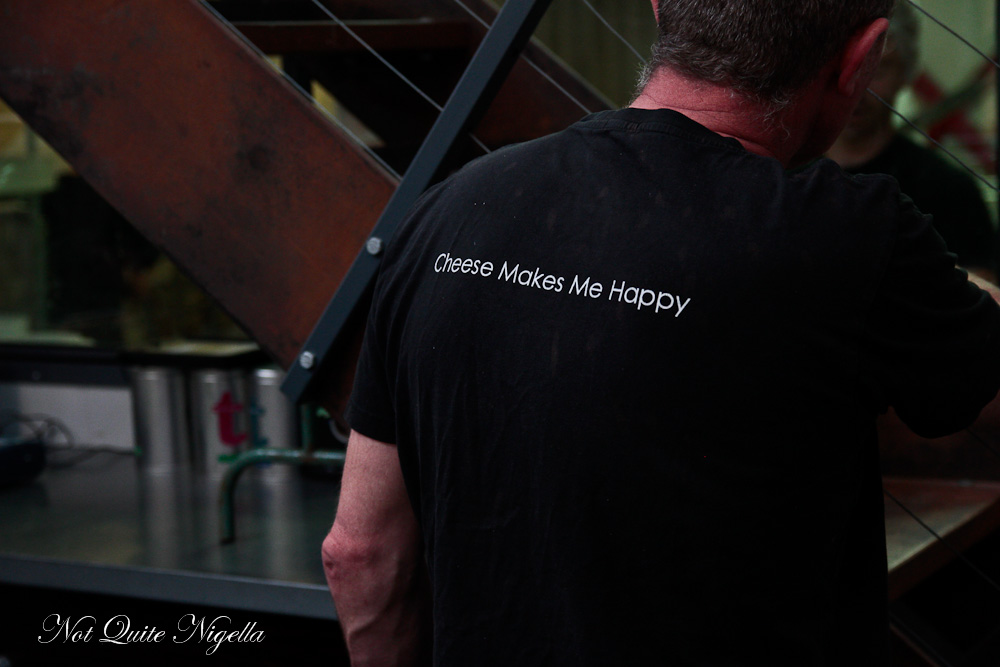 The cheeses range from a pungent washed rind cheese called OEN from the word *oenology * to Saint cheese to the pungent 1792 (when the French first set foot on Tasmania). We watch them hooping a milder flavoured cheese called the o.d.o. or the one day old which is best eaten with ripe summer tomatoes or on pizza. Tom is based on the Tomme cheeses of France and is sold as a single wheel. The light grey rind on the outside and the hand written "Tom" on the outside designates this five month aged cheese. 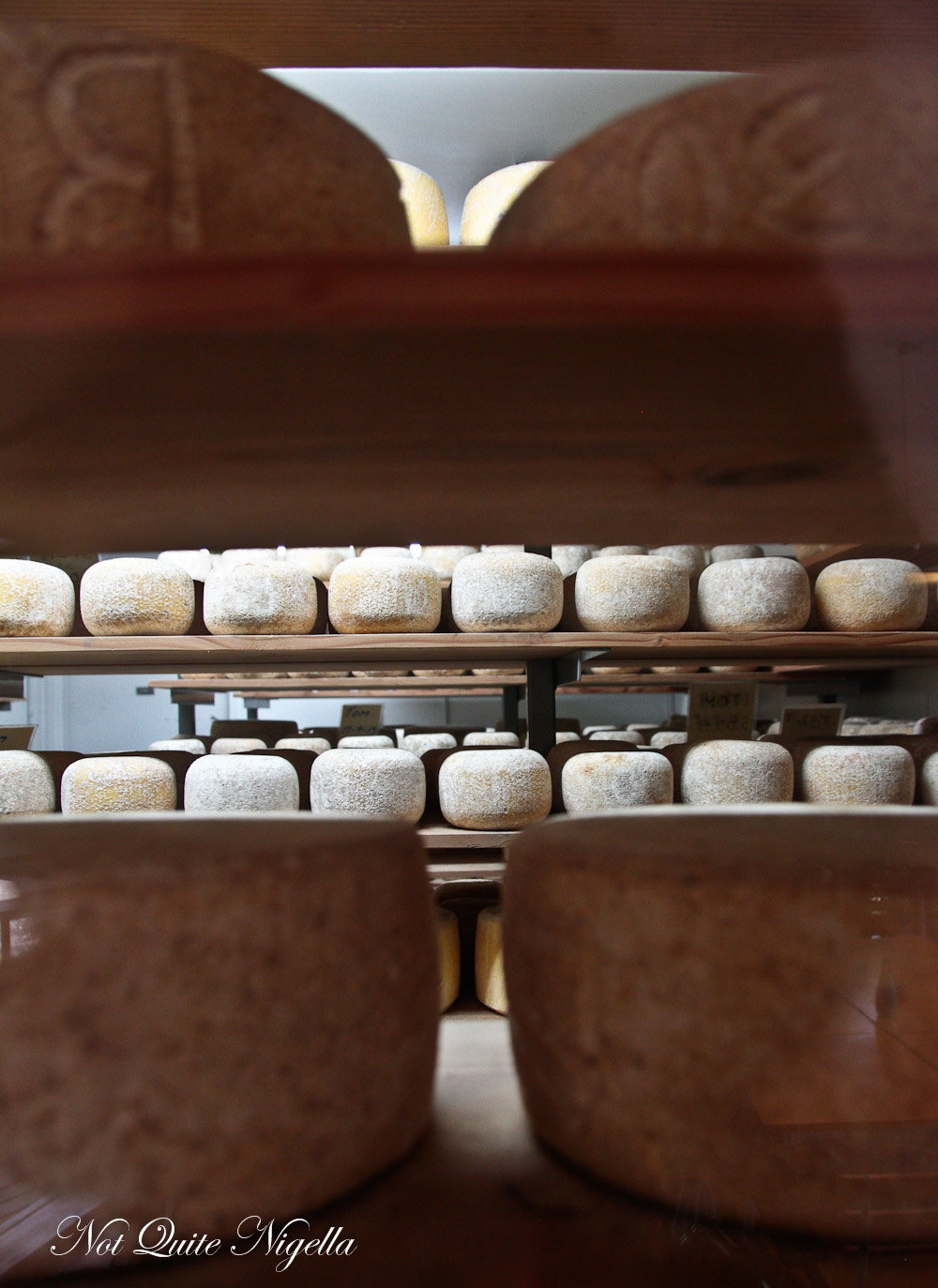 So what is the raw milk C2 like? It is matured for 6-12 months and is modelled on cheese found in mountains through France and northern Italy. It's a cooked cheese made in large wheels and the rind is wiped every week to encourage the desired surface bacteria. It's a strong, salty cheese, not unlike reggiano. 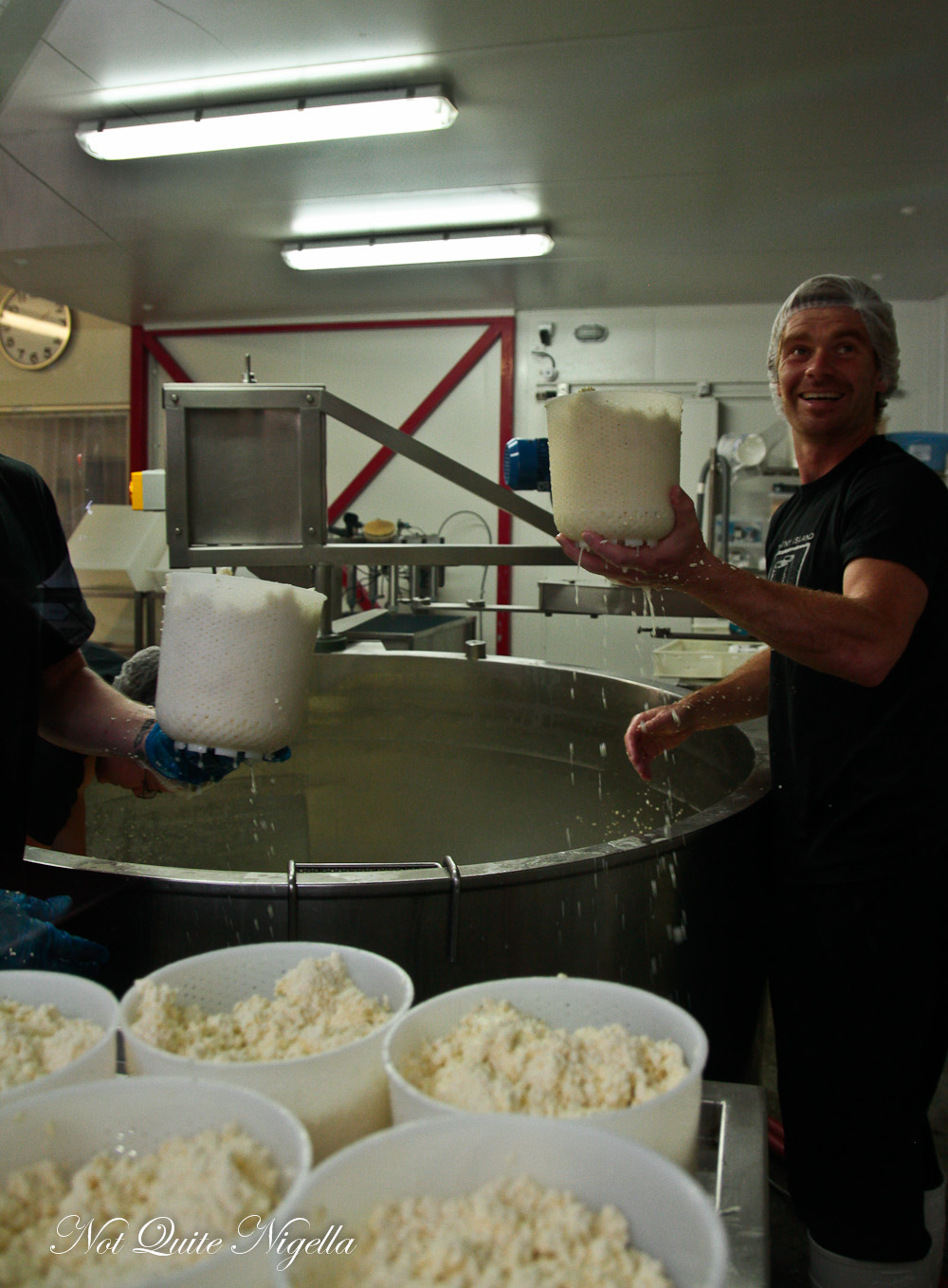 Packing up some cheese for our travels, John takes us on a special visit to watch the goats, pigs and emu roam free on pasture. John is originally from New Zealand and arrived in Bruny Island four years ago. This farm is one in which the animals see the sun, rain and play and act as animals are meant to. 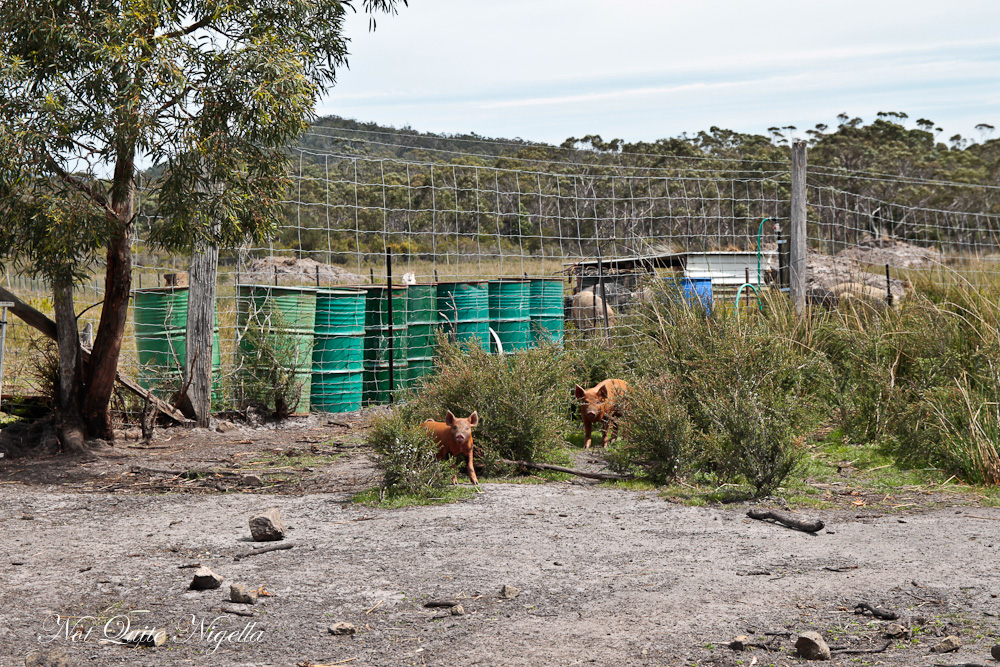 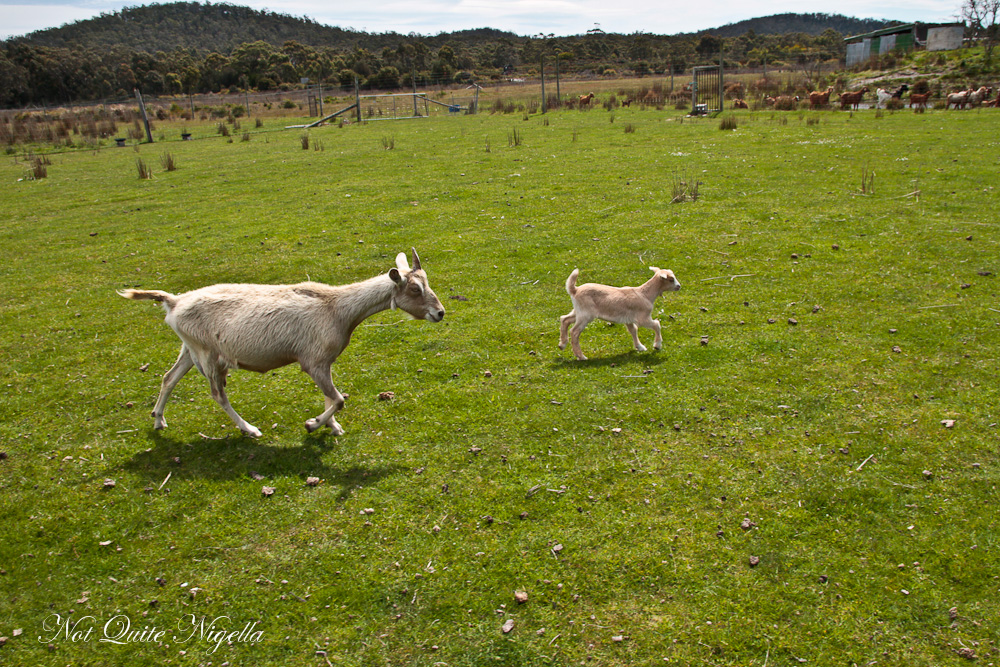 The little brown "Tamworth" piglets steal our hearts as they run away from us as soon as we arrive but then run back towards us eager to find curious about our presence. The goats are bolder and hopeful that we are carrying food for them. They're insistent and known for being pushy. 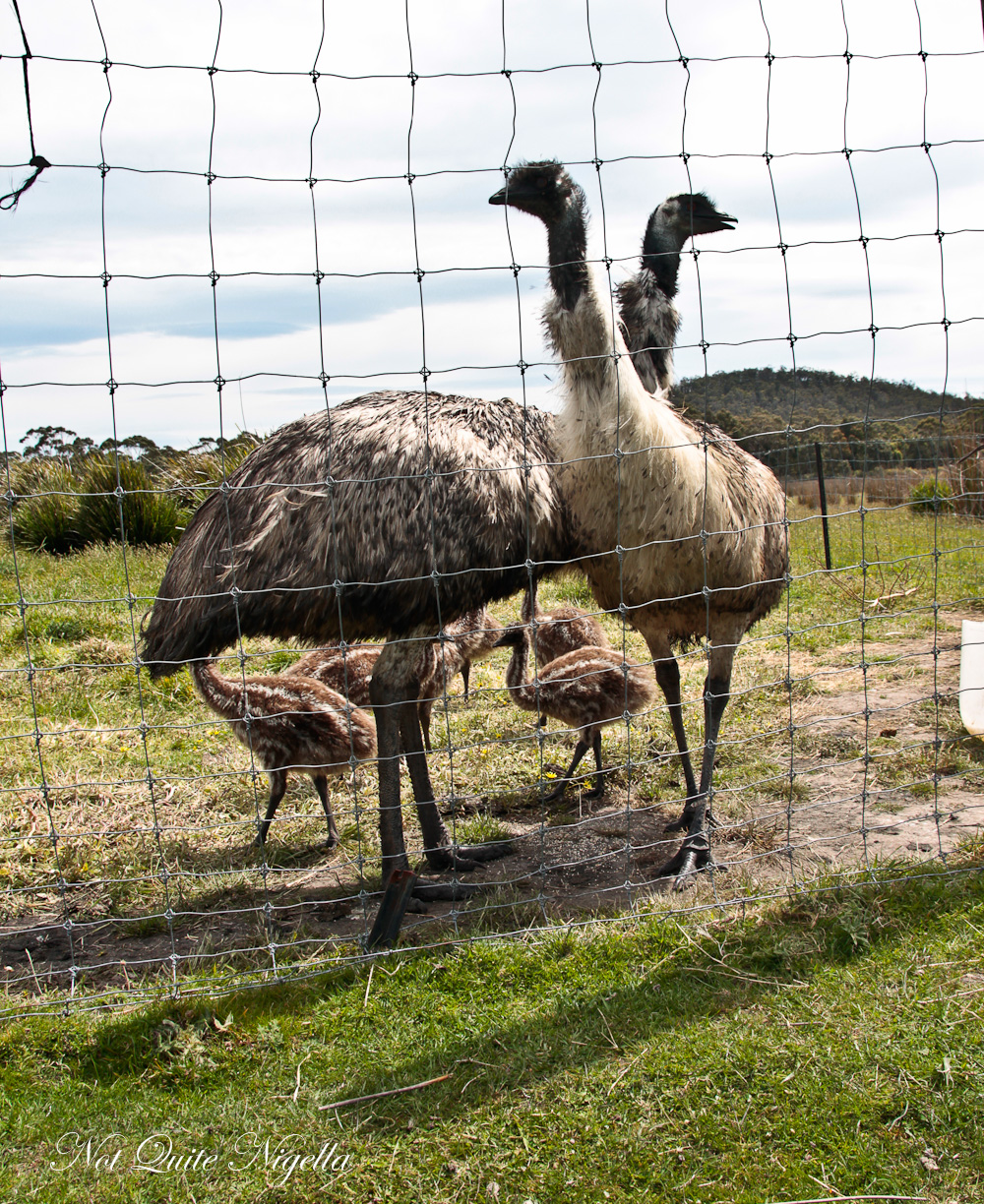 Fluffy striped baby emus hide timidly behind their large strong necked parents. Spring with its bounty of babies is the time to see the animals at their most endearing. To see them frolicking around to the gentle soundtrack of their bleating and snorting is delightful. 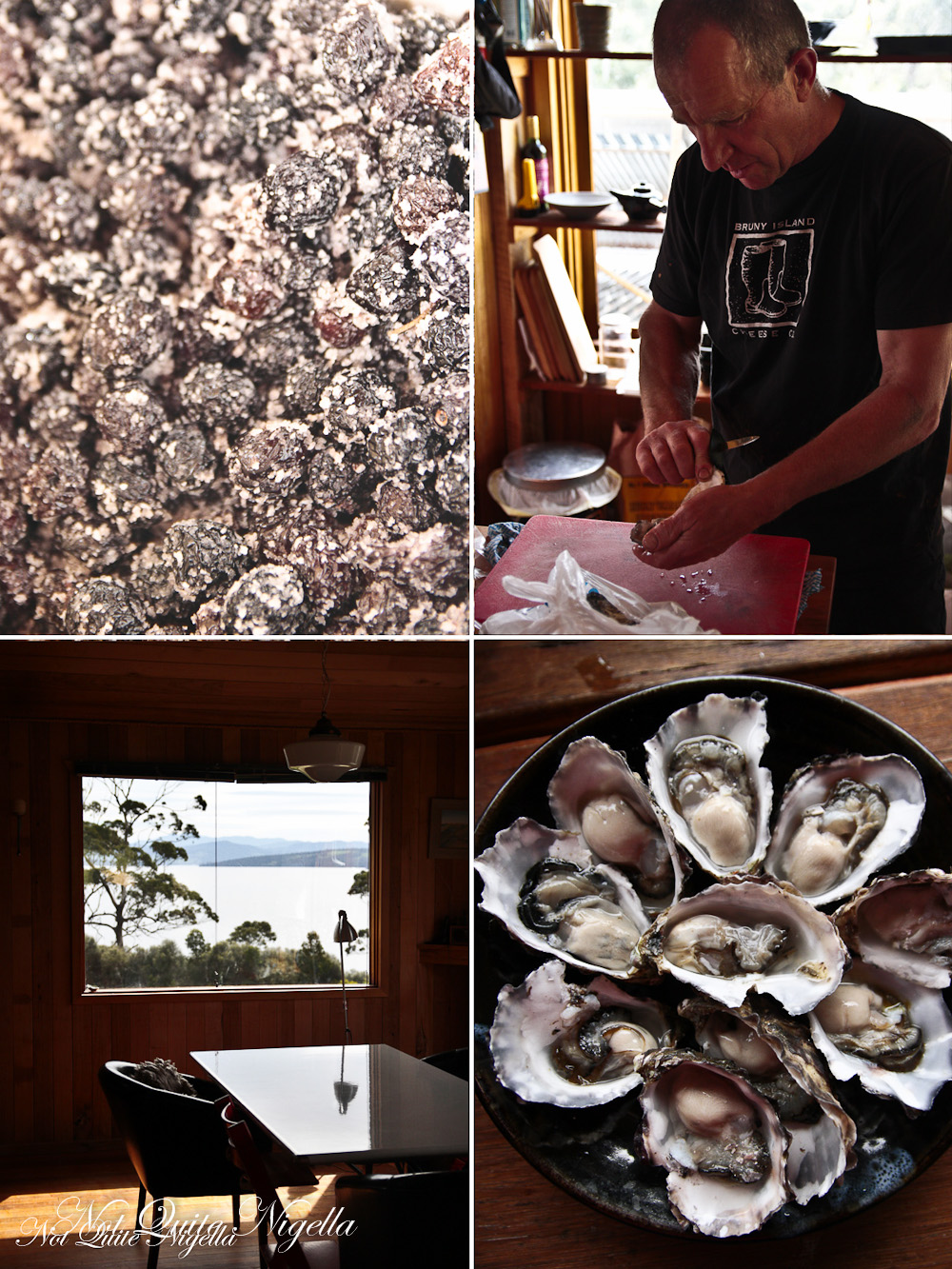 Back at his house, off the beaten track, John expertly shucks some oysters. He shows us the olives that he is salting and the sea lettuce which is sun drying which he will use in place of salt to season the food. There are plans to build accommodation on the site with uninterrupted views of the channel. 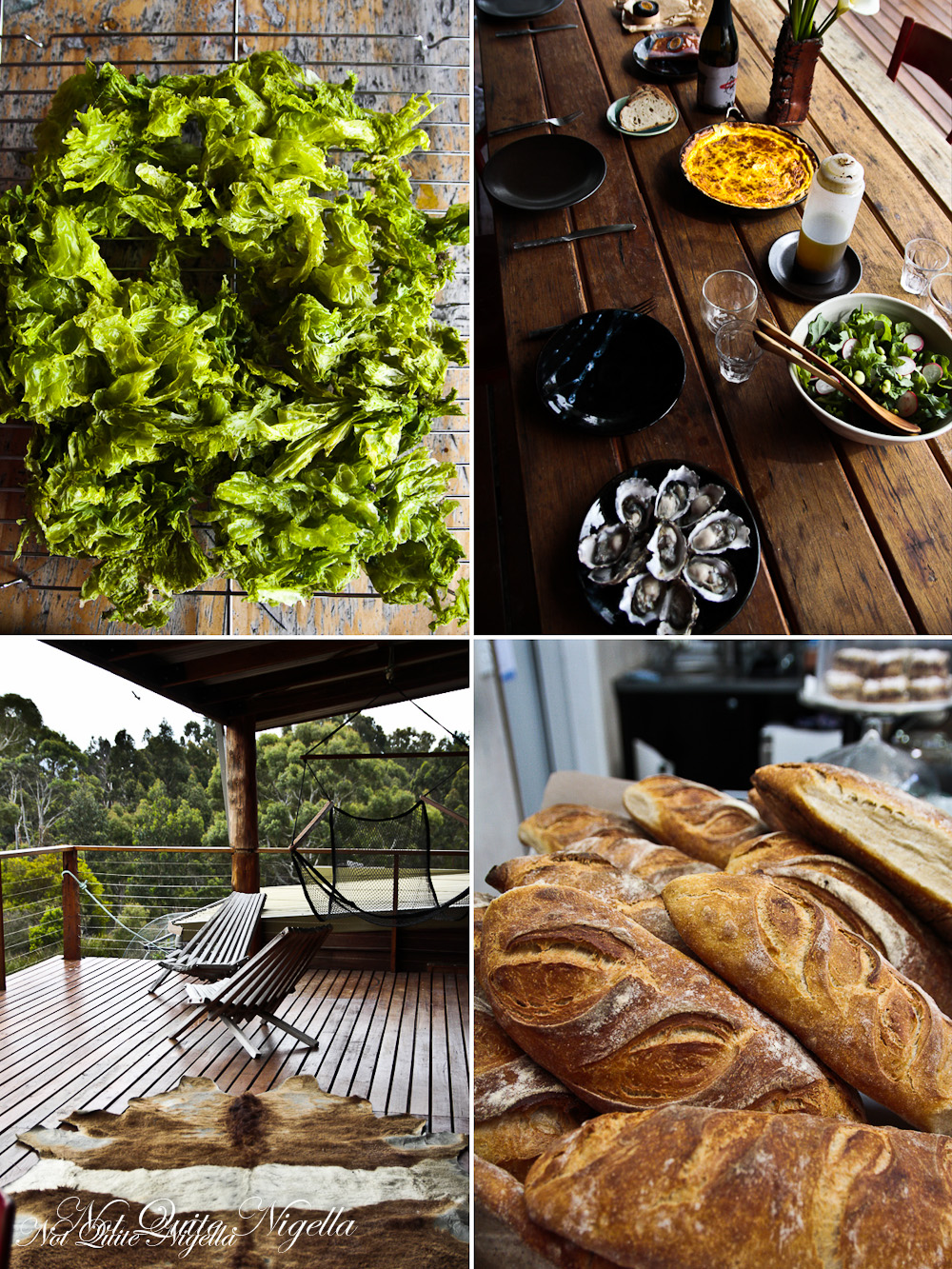 The chickens walk past their heads nodding back and forth. Wilbur the rooster keeps watch over proceedings and his thirty strong group of girlfriends. Sitting in the sun dappled porch watching the D'entrecasteaux Channel, drinking Tasmanian wine and eating local cheese, quiche and freshly shucked oysters is spell binding. Perhaps next time we'll stay the night.

So tell me Dear Reader, would you like to live on a small island? And have you ever tried raw milk cheese?

NQN travelled to Tasmania as a guest of The Federal Group. Purchases made on Bruny Island were independently paid for.

Bruny Island is accessed from the ferry wharf at Kettering, Tasmania. 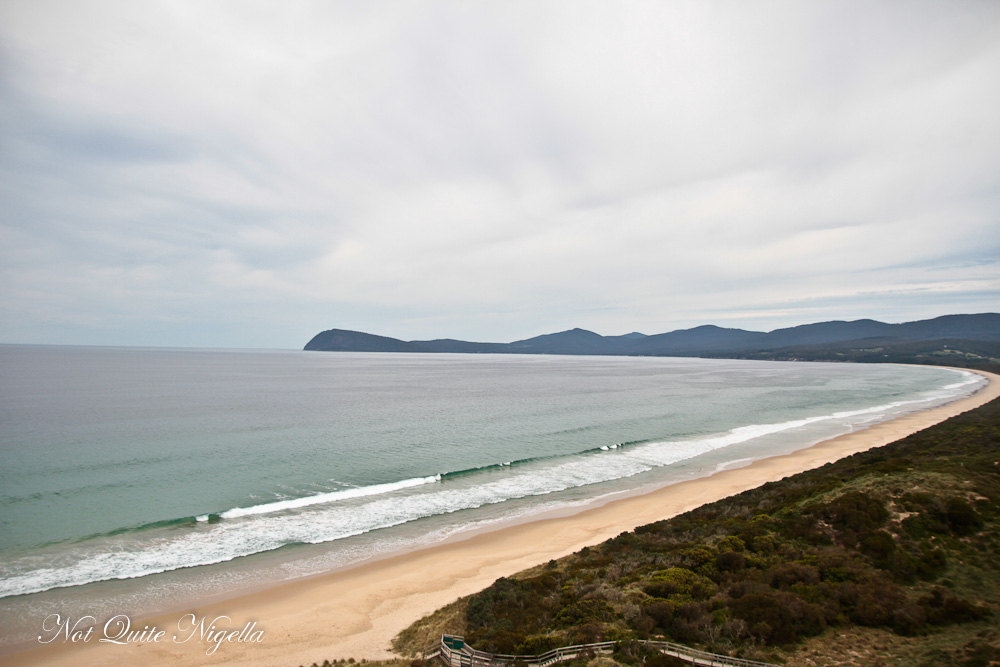