Eating Our Way Around Tasmania 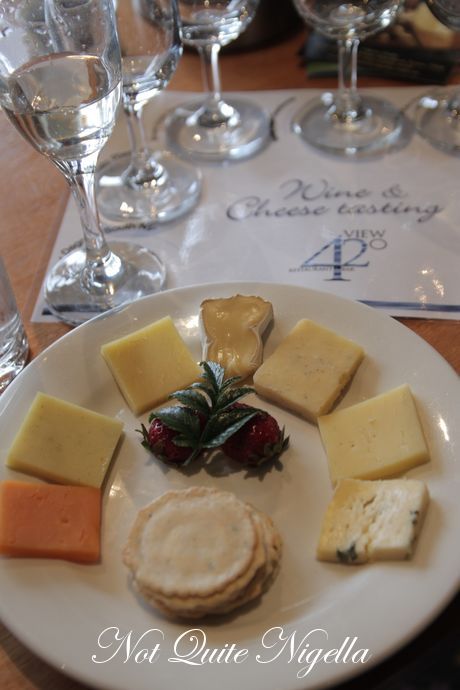 I take eating quite seriously. What I mean by that is that should you ever try and skip a meal past me there will be howls of protestation and anxious pawing. There will be a severe loss of concentration and my mind will wander. I may even look at you like you might be a tasty morsel to eat. 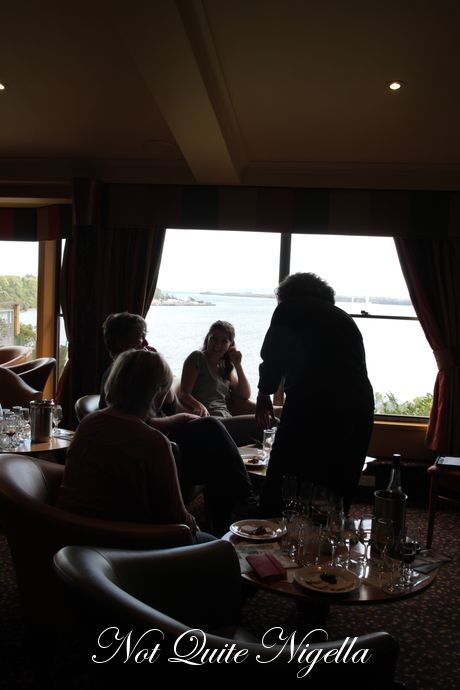 Wine tasting is all very fine but for me, wine is infinitely more enjoyable when it is combined with food. And today when we're in the climatically chilly area of Strahan in Tasmania (an opposing force to Sydney's 35-40C humidity at the time), we are settled down to partake of a little wine and cheese matching. 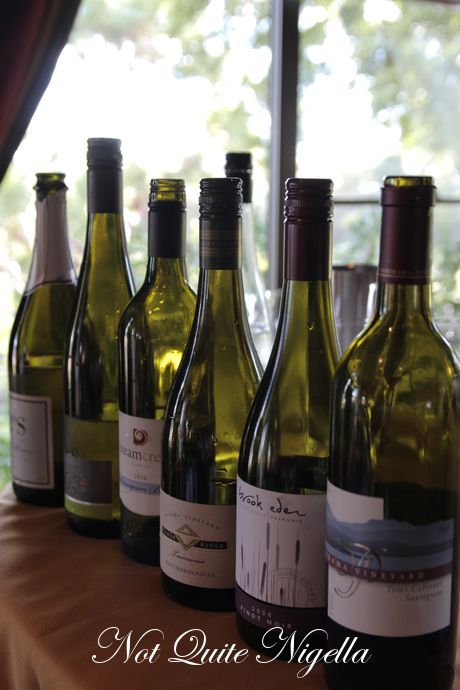 Rebecca who is holding the cheese and wine tasting is lovely. There are two cheeses from King Island cheese and the rest are the Ashmore cheeses which are produced in Tasmania. Some of the matches were absolutely sublime, particularly the King Island Cape Wickam double brie and the Tamar Ridge Chardonnay and the dessert wine and cheese combination of Frogmore Creek Iced Riesling with the King Island Roaring 40's blue whilst some of them matched less so. Some of the journalists that I travelled with made loud objections to one match. 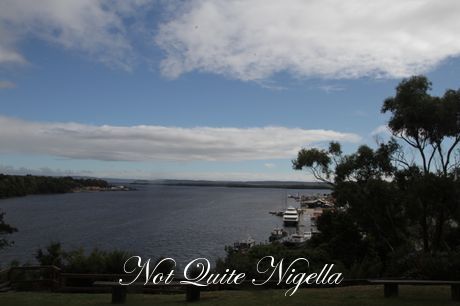 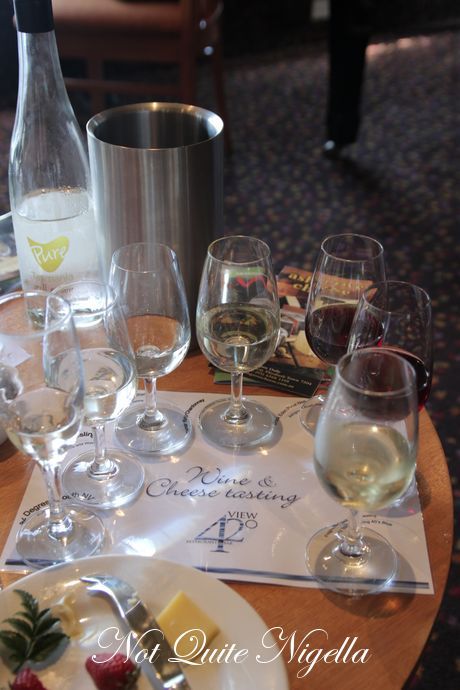 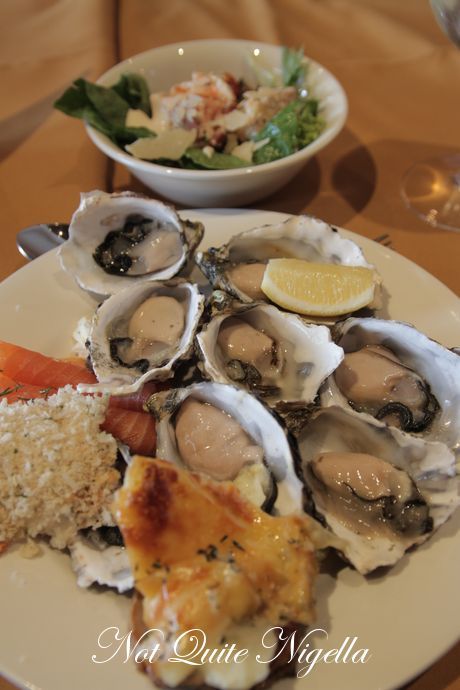 A little while later we help ourselves to the Strahan Village buffet. I'm not a huge buffet gal but a seafood buffet, well that's an entirely different creature you do see. There are fresh Tasmanian oysters, ocean trout, smoked salmon as well as a crumbed fish. There is even a scallop waldorf salad! Sadly every time I tried to get a shot of the display it looked a bit depleted despite the fact that they were refilling it in a timely manner. A half helped to buffet makes for some not so pretty pics. 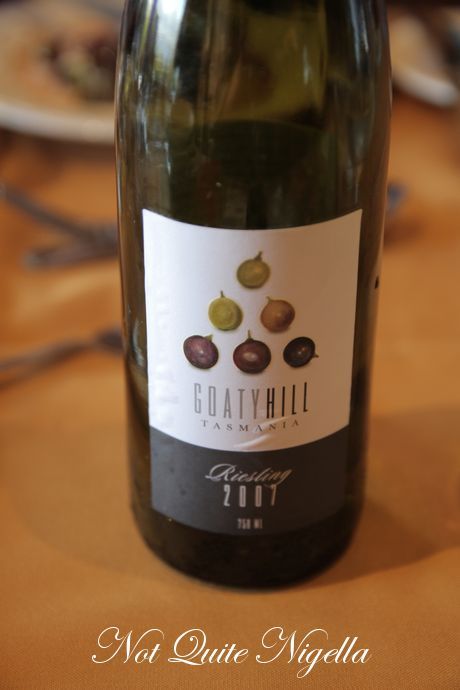 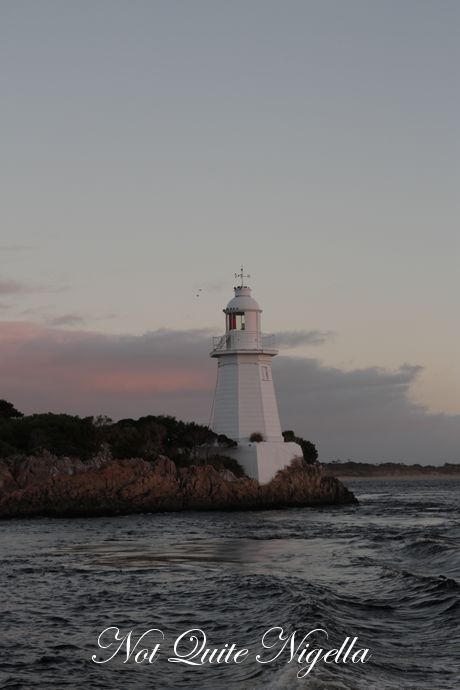 But dinner is had quickly as we have other plans later tonight. I have a bit of a thing for lighthouses. I always think that they look so magnificent and unlike a half eaten buffet display, are very photogenic. And tonight we are headed to Bonnet Island for some little penguin watching. We board the boat and head towards Hell's Gate which conjures up all sorts of images. 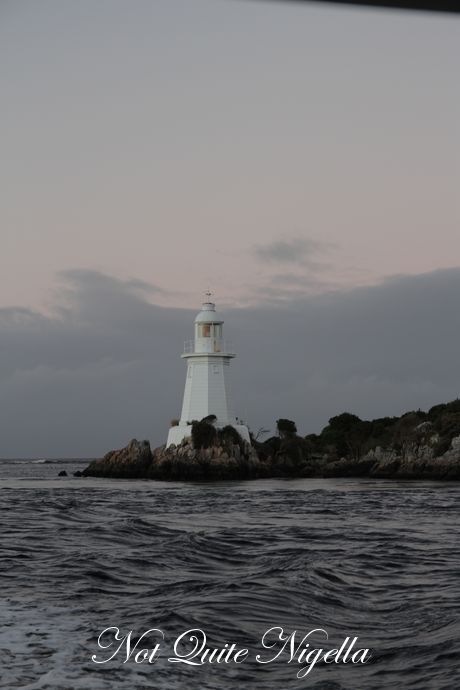 Yes another lighthouse-I must have a fetish...

Our well informed guide Kath takes us through the history of the area and imparts on us the legends of the lighthouse keepers. I don't want to ruin the surprise should you want to take the tour yourselves but the story of the longest serving lighthouse keeper is an interesting one. OK I'll tell you because saying something like that is like saying that you know a secret but won't tell, it's annoying!

One lighthouse keeper lived there by himself for a number of years and had quite a few provisions sent to him. He grew increasingly bored on this small island by himself (amusingly they sent him a dining table that seated six people) and bored with the same sort of food to eat he sought to go fishing one evening. He rowed out a little too far and when a passing ship's captain reported that there was no light the inspector was alerted. The lighthouse keeper rowed back quickly hoping that  he wasn't spotted but the next morning the inspector rowed up to the island and dismissed the lighthouse keeper after his service of many years. There were no second chances as a lighthouse keeper as the possibilities for failing to do their job could be catastrophic. 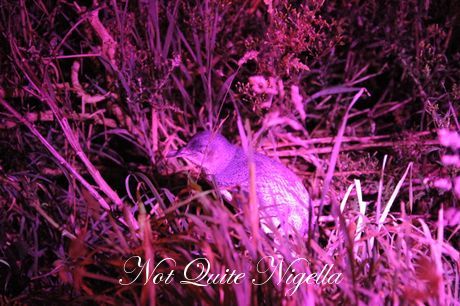 We make our way around the island while the sun is setting and then climb back onto the boat for drinks and cheese, dips and crackers. Once darkness falls, we take our red coloured torches which are gentler on the little penguin's eyes and do our best penguin spotting. They're tame and curious and not scared of humans at all and come right up to us. They also have sharp beaks for beware! 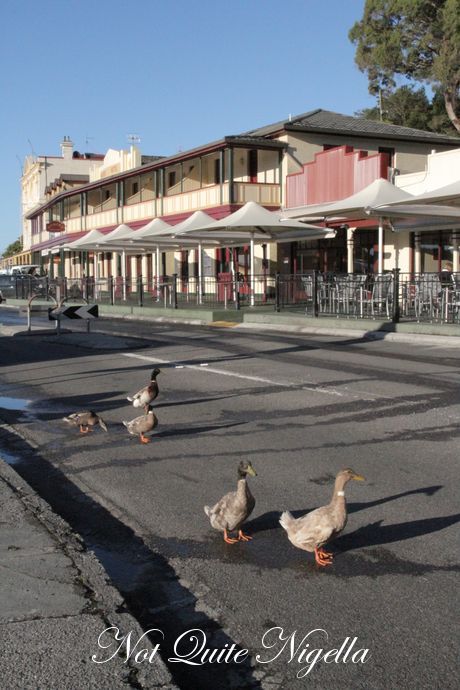 The next morning we rise to the sight of...ducks on the main road? Yes apparently this happens every morning in the quaint village of Strahan. I don't often partake of hotel breakfasts. I'm usually still digesting the meal from the evening before but you know what was calling me don't you? Scallop pies! 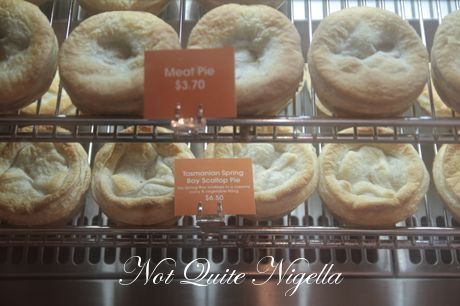 Tim from Petuna buys us each a pie from Banjo's bakery of our choice-I mean what better way to wake up than with a Tasmanian Spring Bay scallop pie. I know you're curious as to what it's like inside... 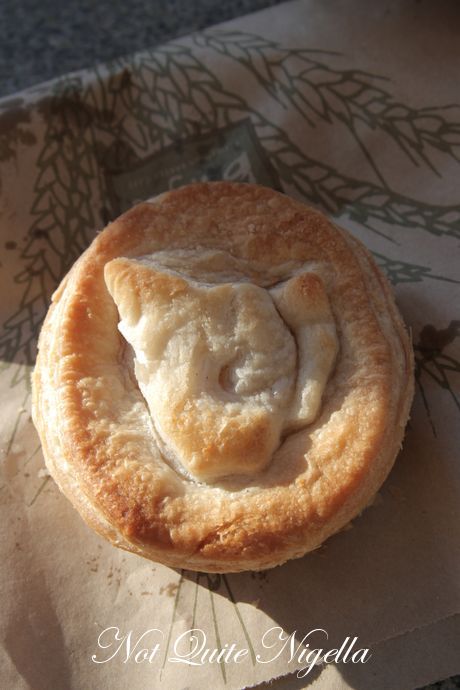 But I need to show you the top first-of course it has a map of Tasmania. 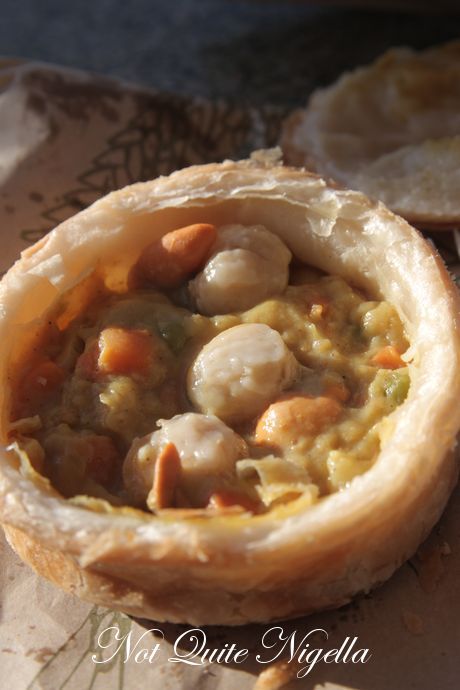 Inside there's are three scallops, roe on, with a mix of carrots and peas and other vegetables in a creamy, curry sauce. The base and top are both made of puff pastry. Not bad for a breakfast! 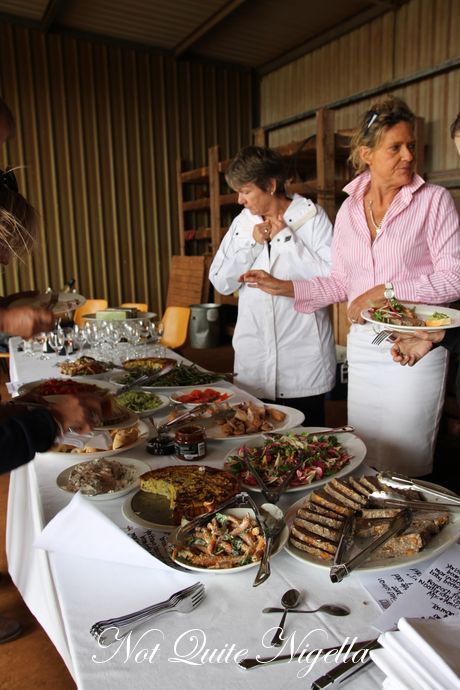 Fast forwarding til lunch (and yes this was a furiously packed itinerary which went from 7am til midnight ever day) and we're at a farm in Devonport for lunch. There is a gorgeous spread of local fare with a particular emphasis on vegetables as we're here to visit Tasmania's vegetable producers. There is 41degrees south hot smoked salmon, broad bean and pea puree, Yorktown baby carrot and artichoke salad (so good!), a bean, feta and pine nut salad, marinated "hothouse red peppers", baby beetroot, parsley & parmesan salad, zucchini picnic pie, Rannoch farm hot smoked quail (lovely!), Woodbridge cold smoked ocean trout and an Alps & Amici farmhouse terrine which is lovely and nubbly and coarse in texture with carrots throughout it and a divine Elgaar smoothie. I ate myself silly but knew that this was a healthy lunch with lots of vegetables and lean meat. 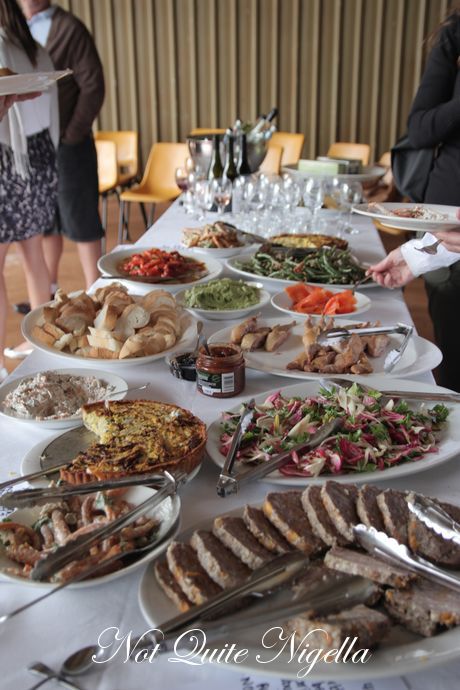 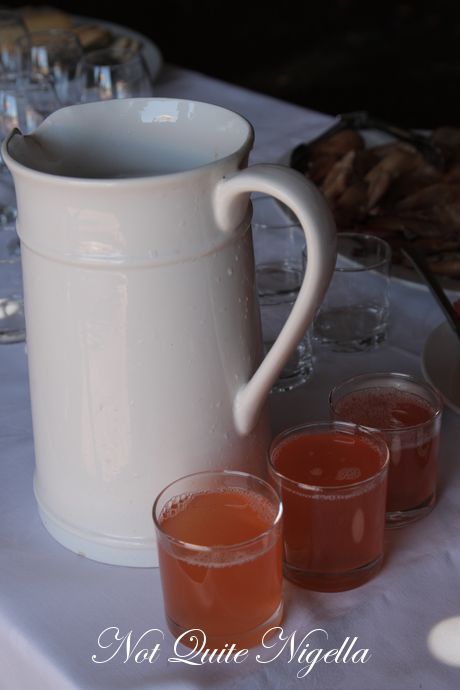 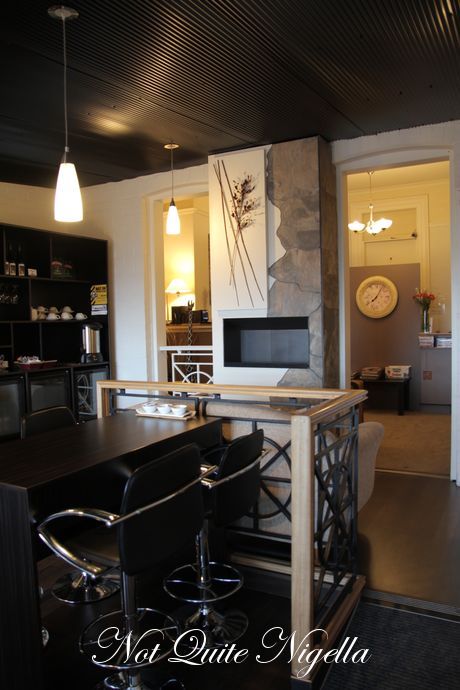 The breakfast room and lobby 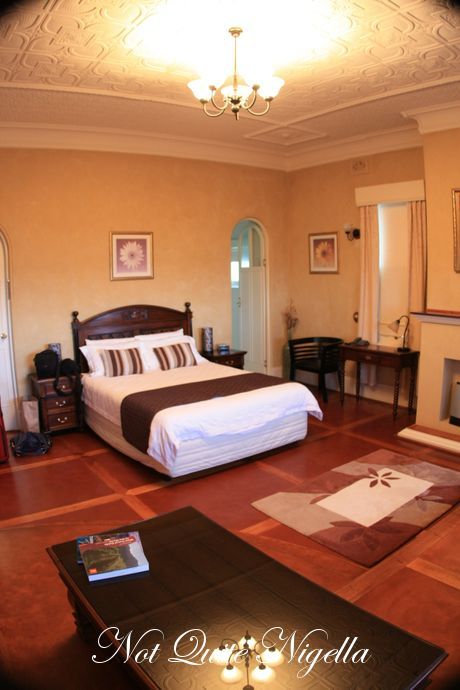 About half an hour's drive from Devonport is the cute little town of Penguin . We are then off to check into our accommodation and we are staying at the Madsen Hotel which was formerly a bank. I'm assigned room #4 and when owner Richard opens up the room I am momentarily stunned. It's very cutely retro but good retro and not outdated retro if you know what I mean. Cute! 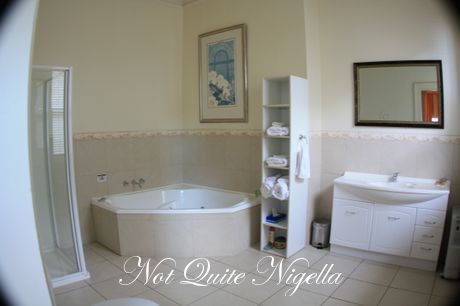 The view is right of the beach from the bed and the room is huge with an extra single bed. There is a spa bath (sadly there is no time  to test this out). The walk in wardrobe room was actually a bank vault (no late night deliveries of money I'm afraid, now wouldn't that be nice!). I fall upon the high speed wifi with gratefulness. And the owners are very welcoming and obliging which is nice when you're feeling tired and frazzled. 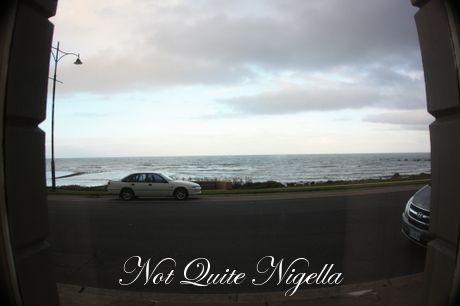 The view from my room

But no time to check this out as I am running late for dinner! I have just enough time to get changed and I rush over (well rush as much as I can wearing heels) to the Wild Cafe which is on the main beach street. It borders a train track and is cosily fitted out in warm reds and artwork. We sit down at our assigned seats and I'm sitting with farmer Justin who grows the peas that are packed in the Birds Eye packets (so it's very likely that I have eaten some of these very peas) and Anthony who grows tomatoes including the Perrino variety which I have also eaten! I suppress the urge to say to them "I have eaten your peas and tomatoes!" 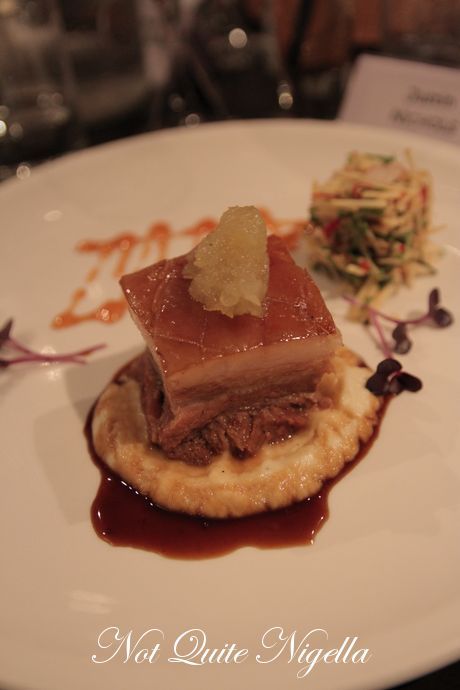 Our food starts to arrive and my entree choice of the pork belly comes as a square piece of pork belly with a lovely, wobbly "look at me" quality when set down. It sits on a bed of sauteed Asian greens and a ring of creamy, smooth cauliflower puree and a neat stacked cube of apple and radish salad which reminds me of waldorf salad without the walnuts. Patterns of sweet, thick balsamic glaze remind me of plum sauce rather than the sticky deep balsamic glazes. The pork is well done and yielding easily to the knife although the skin is soft and slightly sticky rather than crisp and earth shattering. 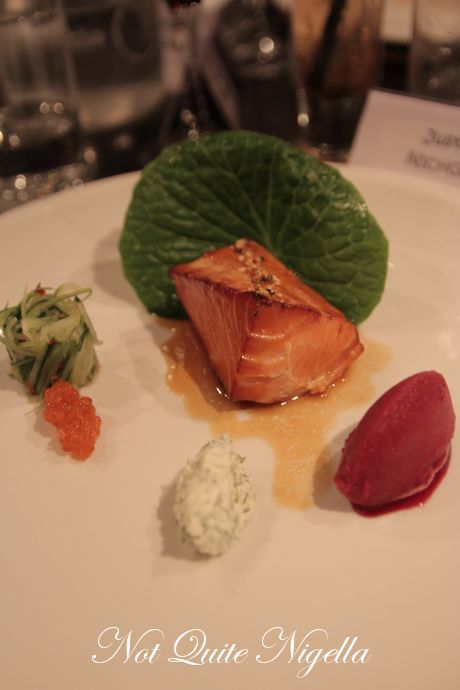 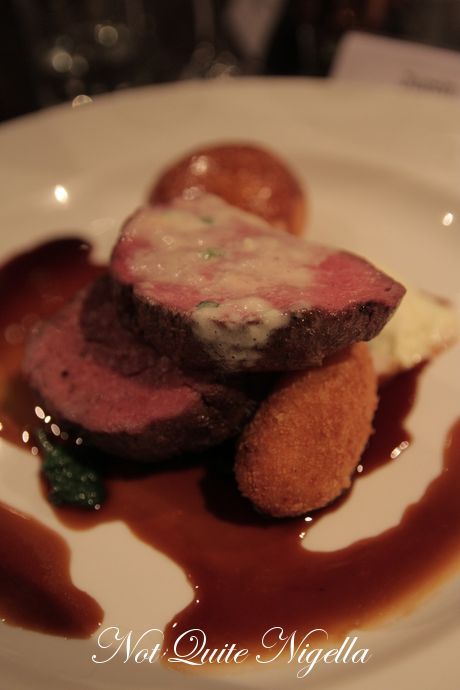 Now the story goes that many years ago in the Circular Heads area near King Island, a ship washed up to shore and contained within the ship were mattresses stuffed with straw. These mattresses washed up onto land and the straw from them comingled with the grass and produced a better quality grass. I don't know how much of this legend is true but it's a good story anyway and perhaps helps explain why King Island products are so highly regarded. The beef comes with a light scoop of wasabi cream fraiche and a gorgeously buttery herb brioche and steamed spinach. And legend or not, the meat is gloriously tender and moreish. Due to the ingestion of much rich food I can't finish it all and when I look around and see everyone on my table has finished theirs I feel terrible. I'm sure they're looking at me and saying "Mainlander!" ;) 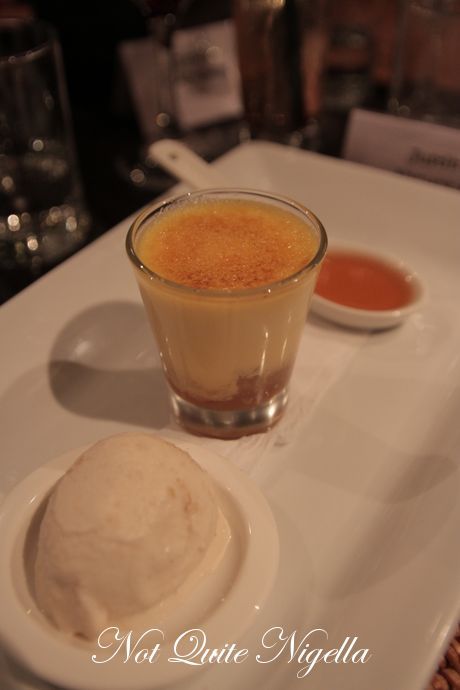 The brulee starts off with with a thin toffee crust  and an apple compote at the bottom but the custard and apple are both very liquidey at the bottom which is a shame. Those at the table lament and say "That's not a brulee". It comes paired with a spoonful of apple syrup and a very unusual tangy frozen yogurt with apple chunks.

As it is getting late and dessert is served around 11:30pm I sneak out a little early to catch up on some sleep. It's a fast paced lifestyle here I tell ya!

So tell me Dear Reader, do you ever skip meals? 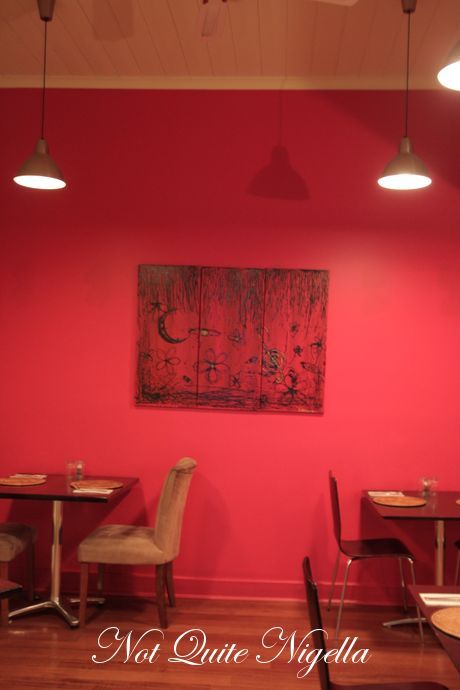 NQN travelled to Tasmania as a guest of Pure Tasmania, Brand Tasmania and the food and wine industry of Tasmania 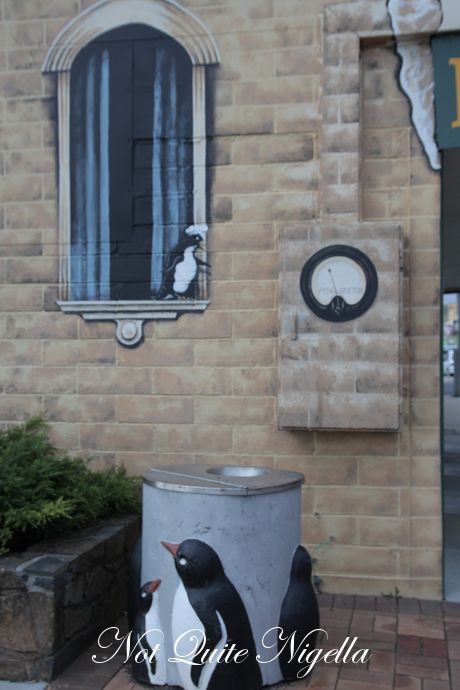