Xitang and the Search for Stinky Tofu 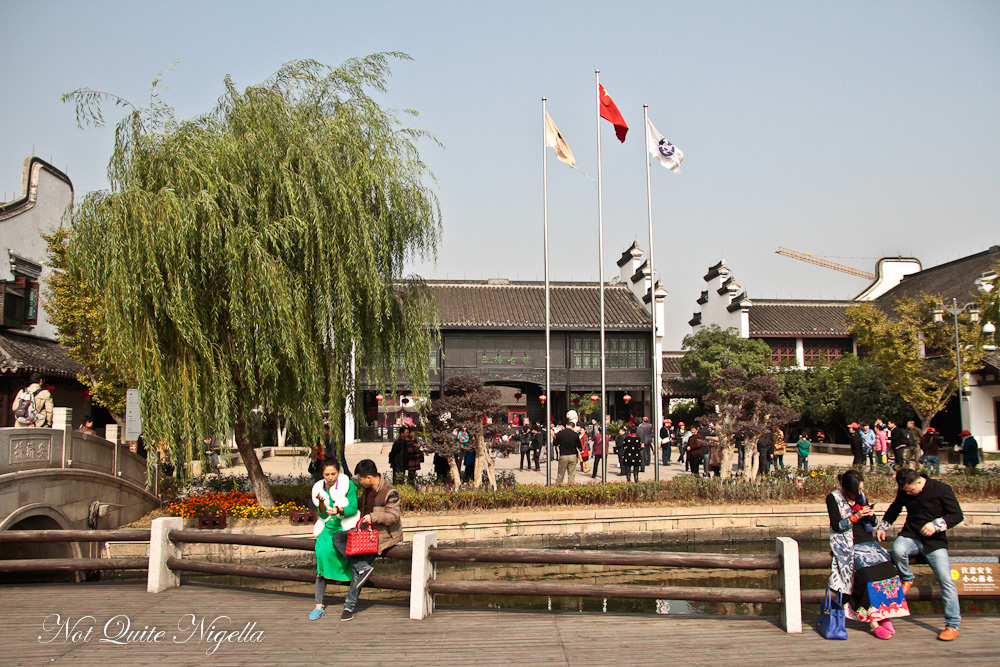 Coming from a relatively young and modestly populated country like Australia, sometimes the numbers in China boggle the mind. For instance, the population of Shanghai alone is 23 million which is about the same as the entire population of Australia. There are also towns in China that are 1,000 years old giving new meaning to the term "ancient town." 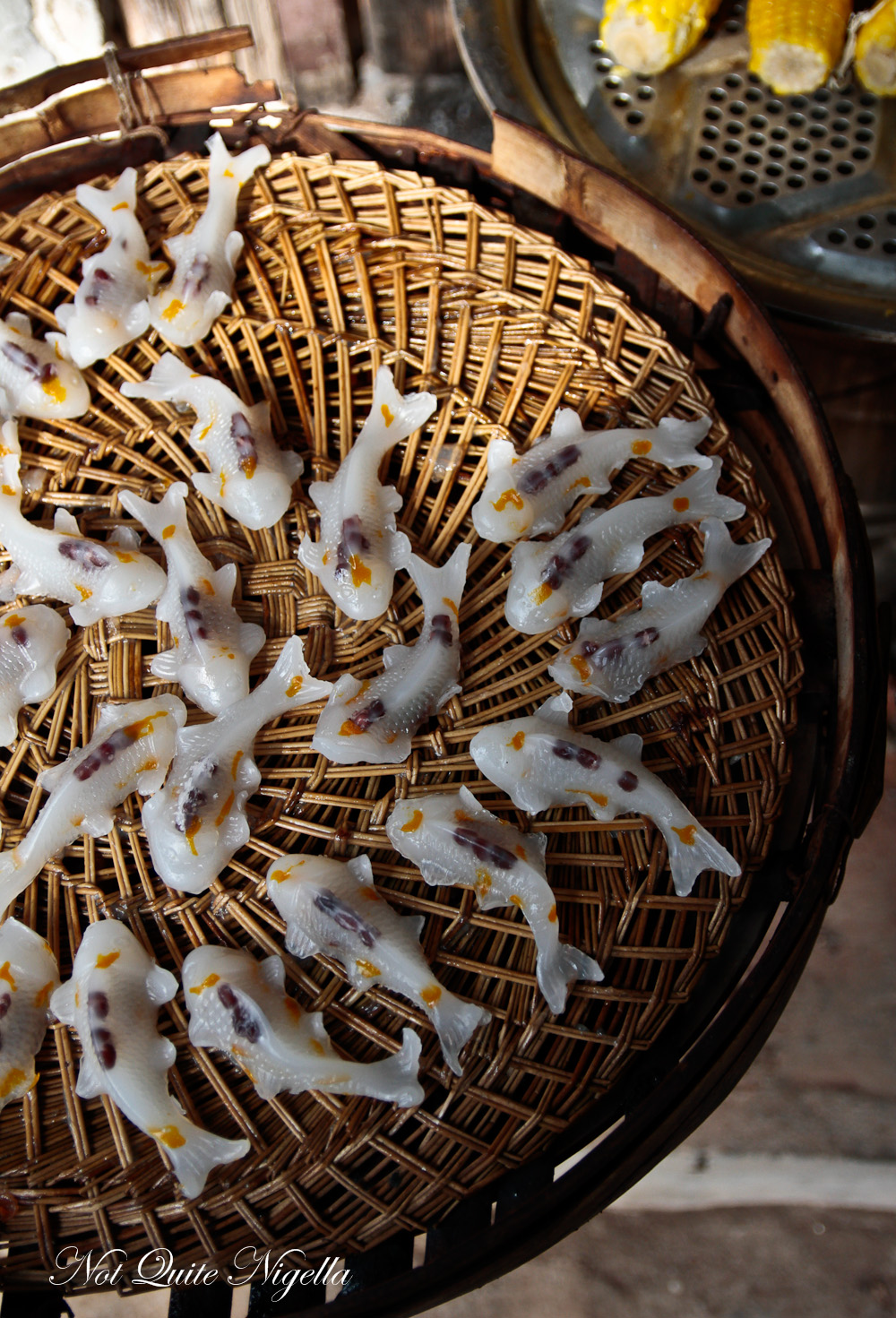 Dubbed the Venice of China, Xitang town is located in Jiashan County, Zhejiang Province about one and a half hour's drive away from the centre of China. Our tour guide Heidi from Shanghai Pathways points at the mind boggling number of high rise apartments that we see on the drive. 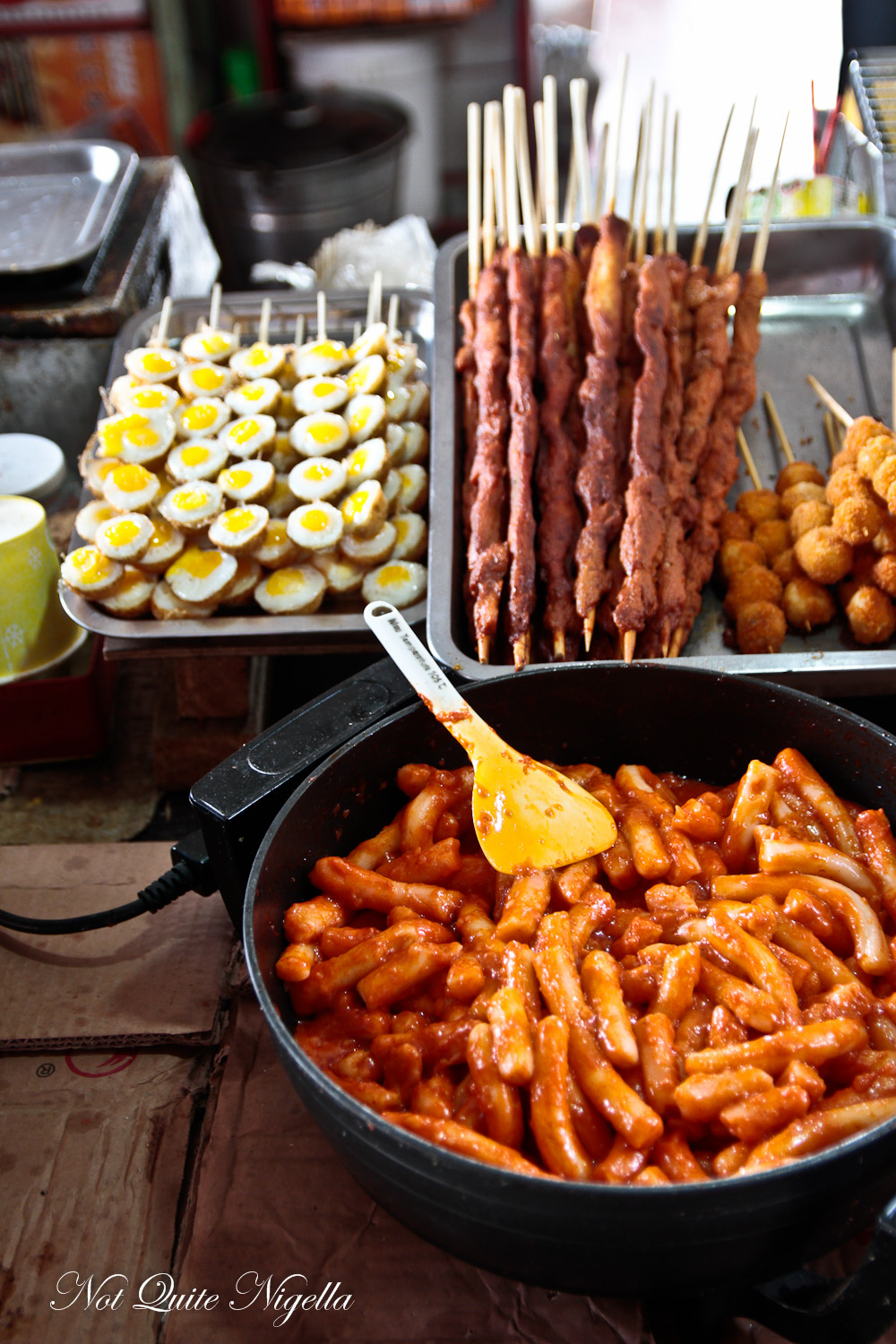 These apartment are in the Pudong (eastern river side) area of Shanghai or are regarded as the less fashionable area to live as opposed to the Puxi (western side of river). It's astounding to see the number of apartments blocks. She tells us that it is part of the government's attempts to lure people from the desirable Puxi side to Pudong. Nearby, enormous industrial chimneys spew smoke clouding the sky for thousands of miles. 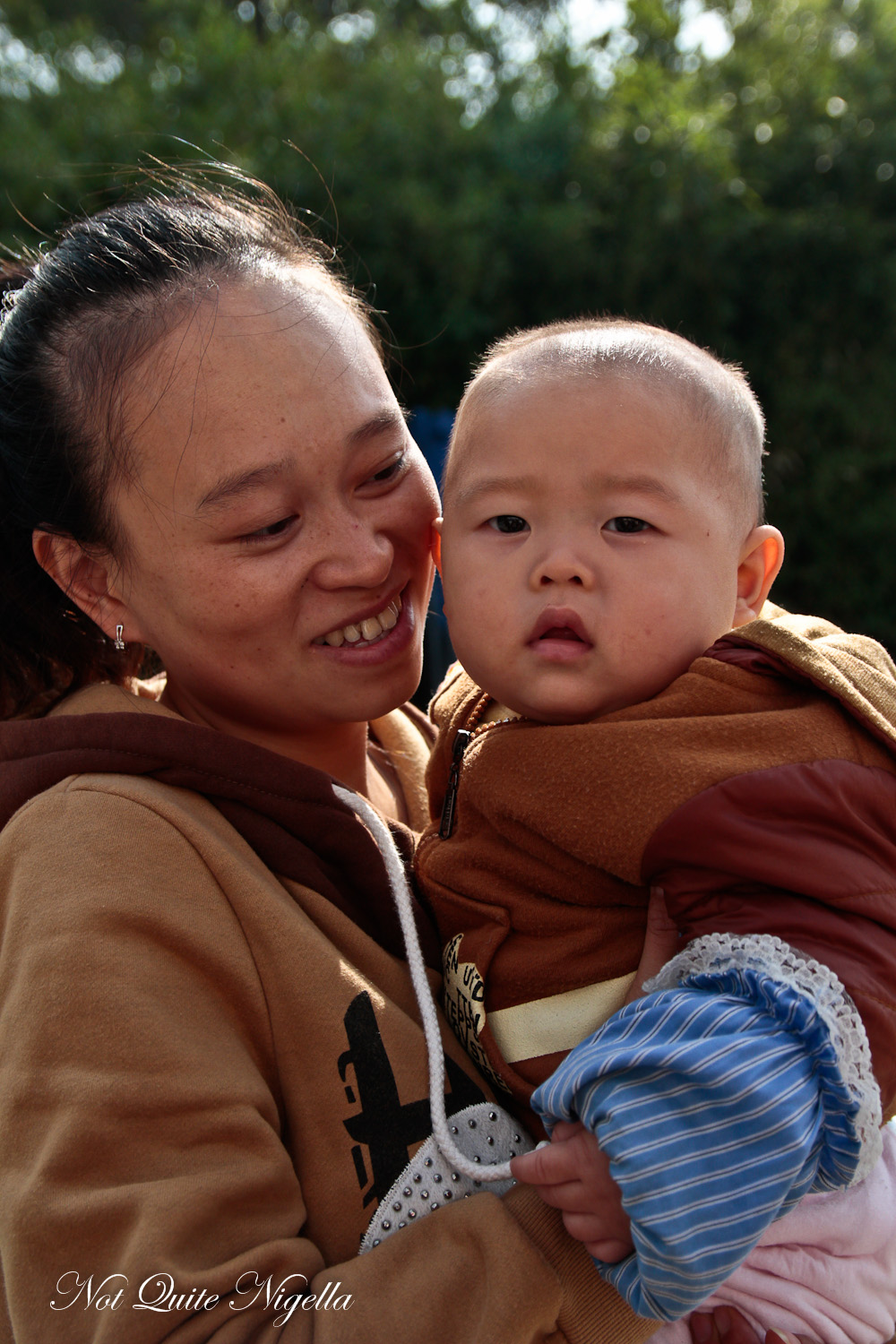 We reach Xitang and buy our tickets and make our way through the town. Xitang is a water town that crosses nine canals or rivers with eight areas of water. A typical water town will have a stone bridge, little canals and small low level buildings. It's a popular place to visit made even more so after scenes from Mission Impossible 3 MI3 was filmed here. 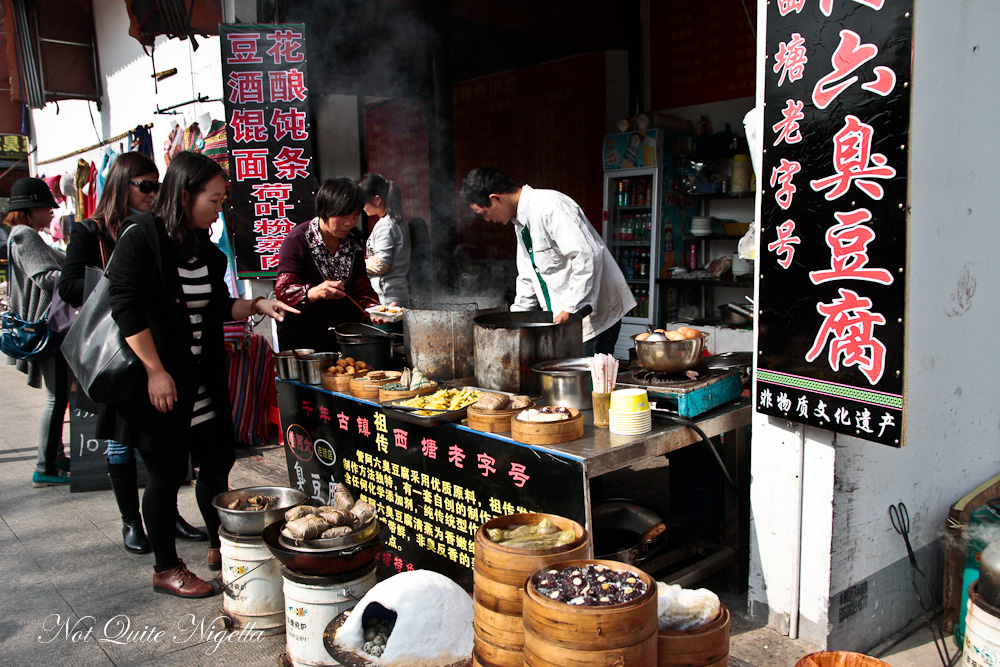 Laura and I shriek with happiness when we come across some food in steamer baskets. Having missed breakfast, we're hungry. A salt igloo holds quail eggs and steamer baskets hold foil cups of black sticky rice topped with half a dried lotus seed and green tinted dumplings filled with pork mince.

The man behind the counter is friendly and allows us to try some items like the potato chips which are coloured yellow from turmeric. We buy a selection of items totalling 30RMB/$5.23AUD and take them to the table to try. 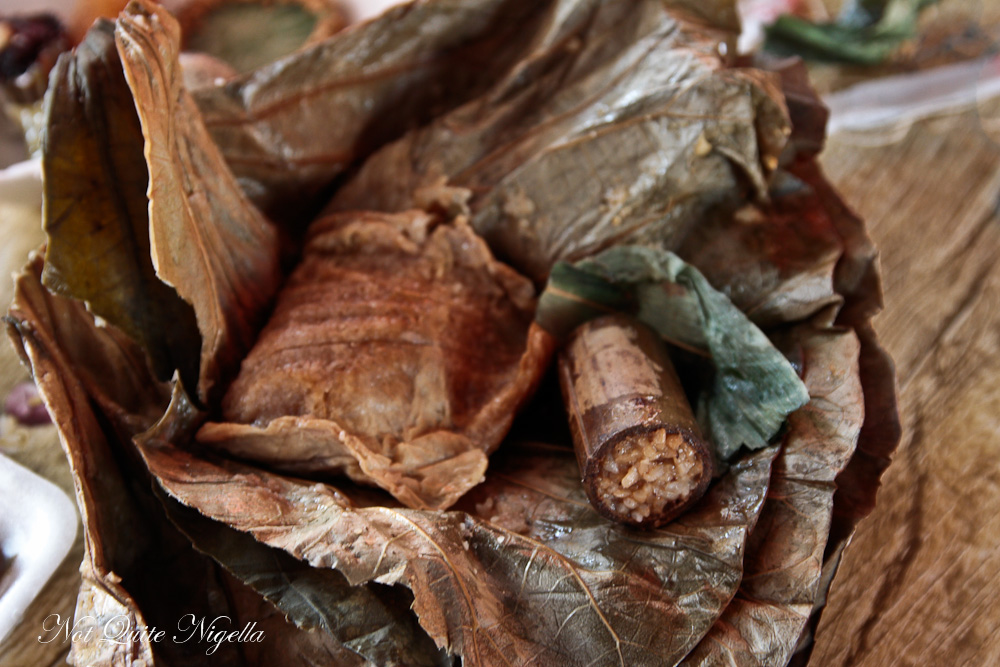 The Feng Zheng Rou, literally translated as "flour steamed meat" are similar to the zongzi that my grandmother would make for me every afternoon as an after school snack. Made with flour instead of glutinous rice they're stuffed with juicy seasoned pork and lup cheong sausage. The short length of bamboo is filled with sticky, slightly sweet glutinous rice. 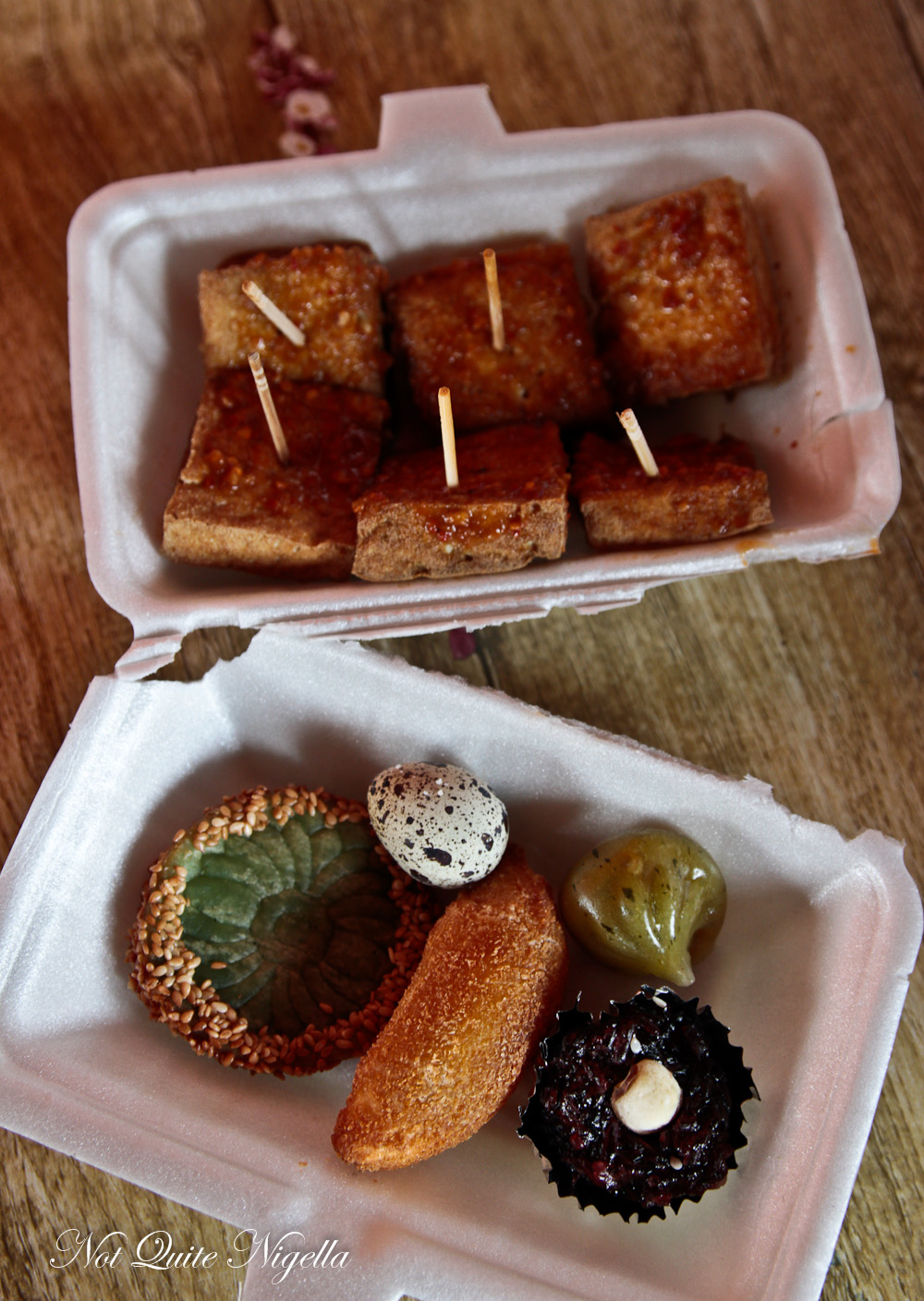 The green biscuit is edged with sesame and filled with bean paste - it's on the dry side while the deep fried crescent is banana flavoured. The black sticky rice is lightly sweetened while the dumpling has a smooth, slightly firm coating and is filled with pork mince.

The tofu however is fantastic. We've been searching for stinky tofu and this is said to be a version of it but it's not stinky at all. It's seasoned with spices and chilli and is packed full of flavour. China takes tofu to an art and there's none of this bland, tasteless stuff that you can get elsewhere. 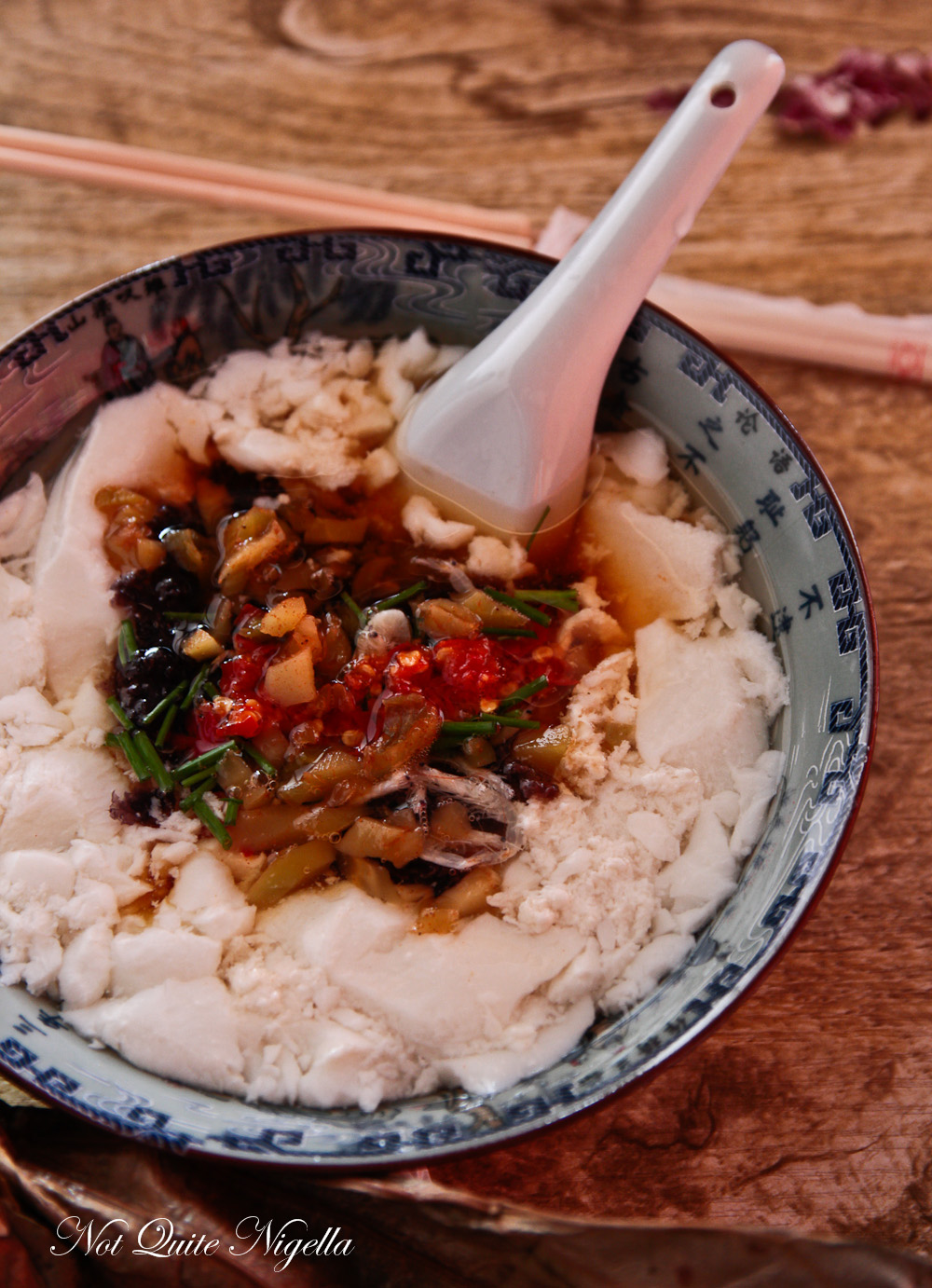 Heidi, perhaps seeing our excitement and what appears to be our unassailable hunger brings over a bowl of what has become one of our favourite dishes on the trip. The salty tou fou soup is a flavoursome broth with chives, seaweed, chilli, tiny dried shrimp, pickles and mouthfuls of soft, silky tofu. She explains that this is a popular breakfast to eat alongside a vegetable or red bean bao steamed bun. 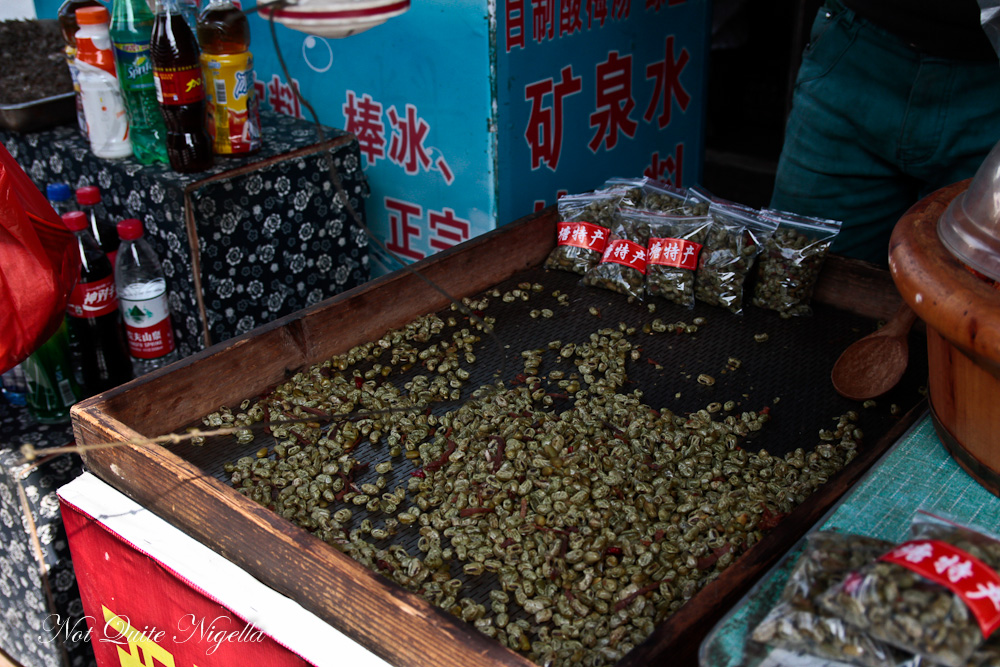 A boy sells green beans seasoned with chilli and tofu and offers us a sample. They're actually delicious so we buy a bag to eat while walking not realising just how much food we will encounter. 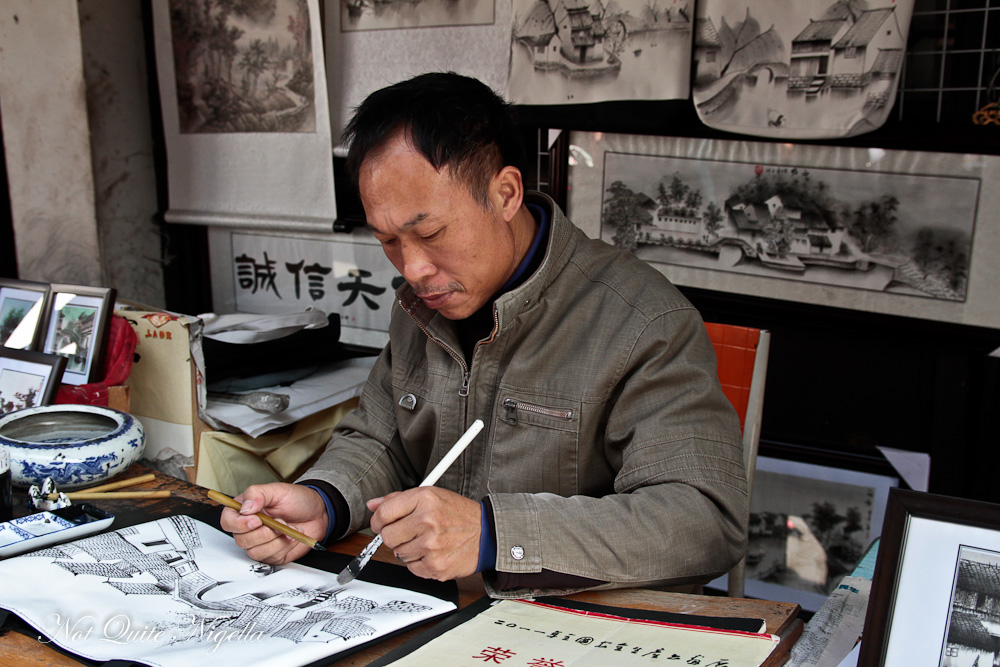 Another stall vendor offers us tastings of peanut and sesame sweets, all delicious gifts to bring back home. Toffee coated fruit are sold at one stall and the vendors have a wheel that you spin and whichever animal it lands on is what they will create in a toffee version. Another artist paints Xitang's scenes on bags. The prices for souvenirs at this market are very reasonable especially compared to shops within the heart of Shanghai. 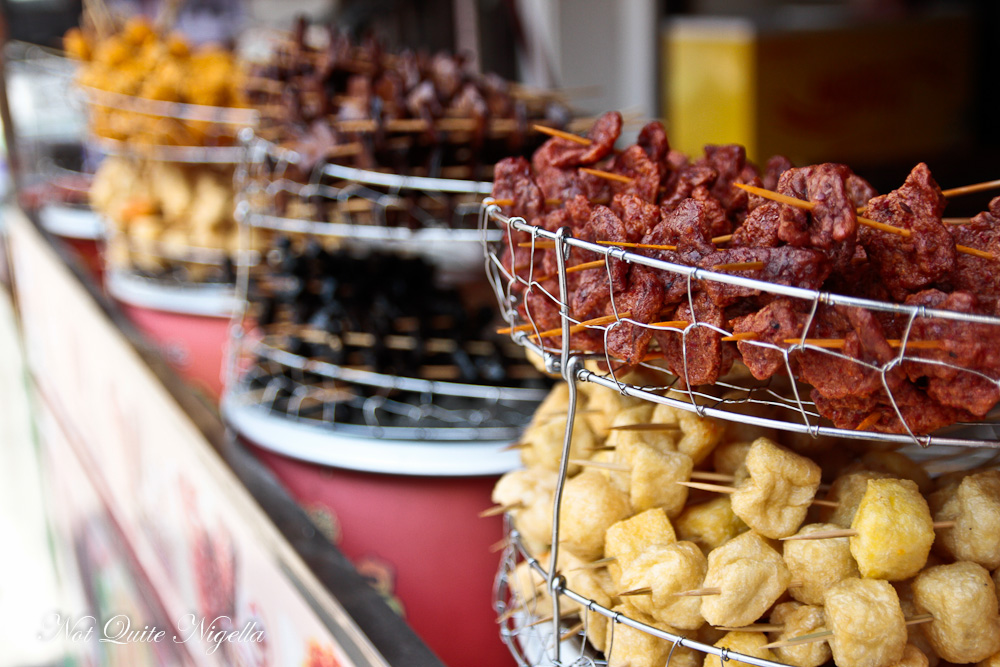 There is one stand that sells just tofu and fried chicken. For 10RMB you can buy 5 sticks of tofu with different flavours. There is a soy sauce, spicy, deep fried and fish tofu. We try them all and they're fantastic, some thin and chewy, others spongey and soft. 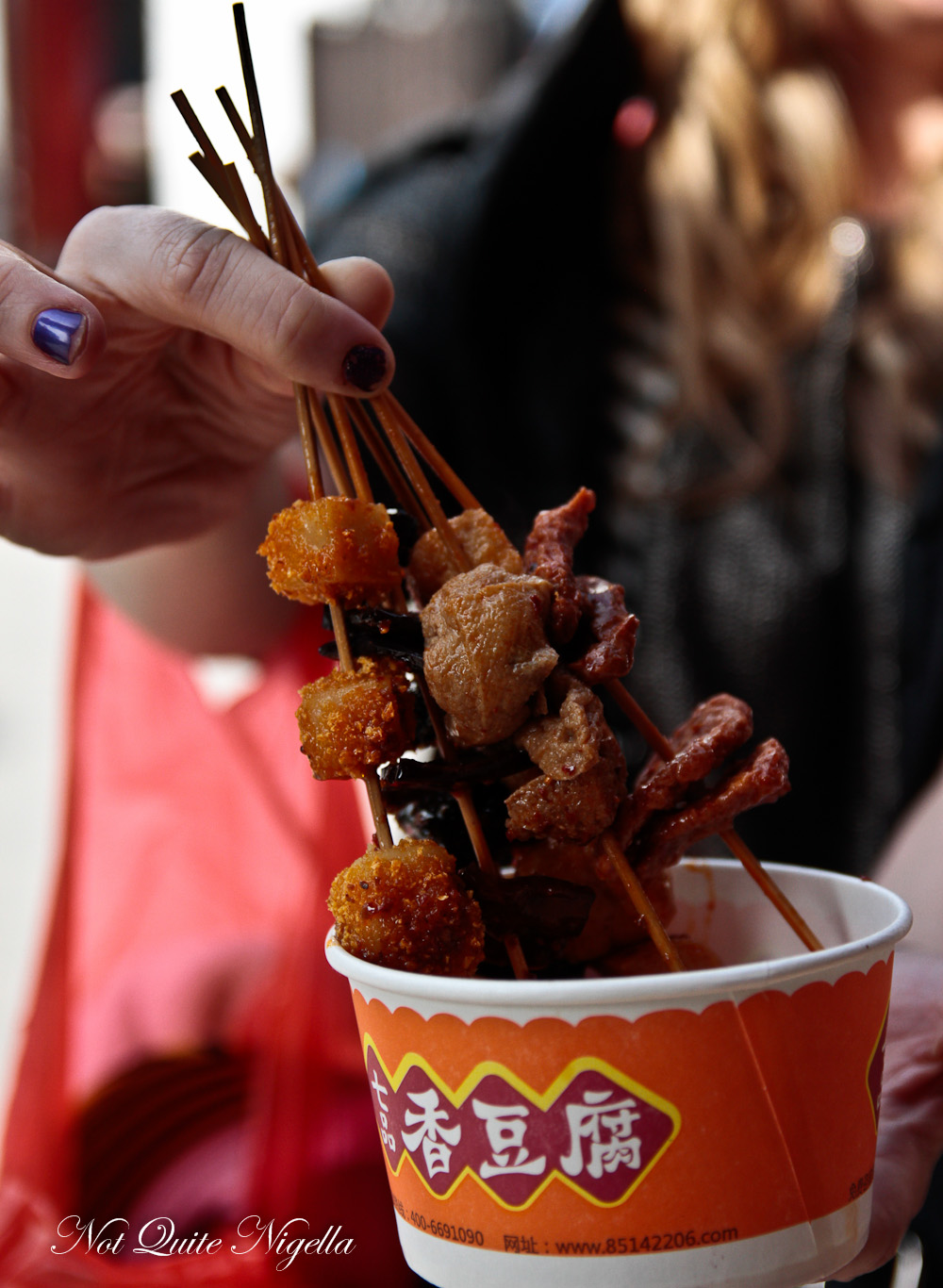 We watch Heidi's brow furrow with concern and she tells us that we should hurry because for all of this eating, we haven't actually even reached the famous gate to enter Xitang - oops! 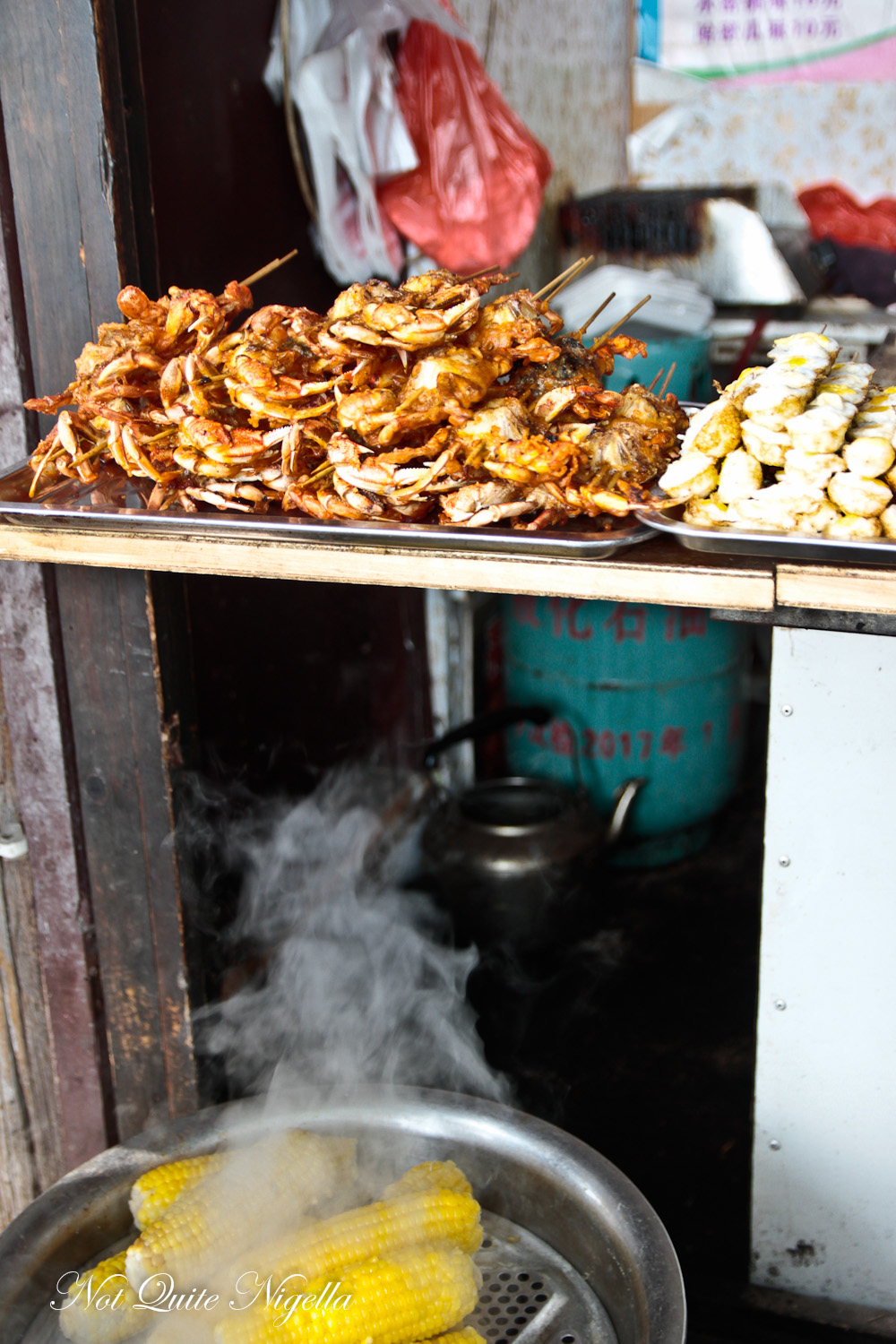 We hustle but not before our eyes catch a glimpse of crab on sticks and glutinous rice fish filled with red beans. I buy a crab skewer and for the princely sum of 10RMB ($2AUD) I get two crabs on a skewer, both dusted on their upturned bellies with seasoning. 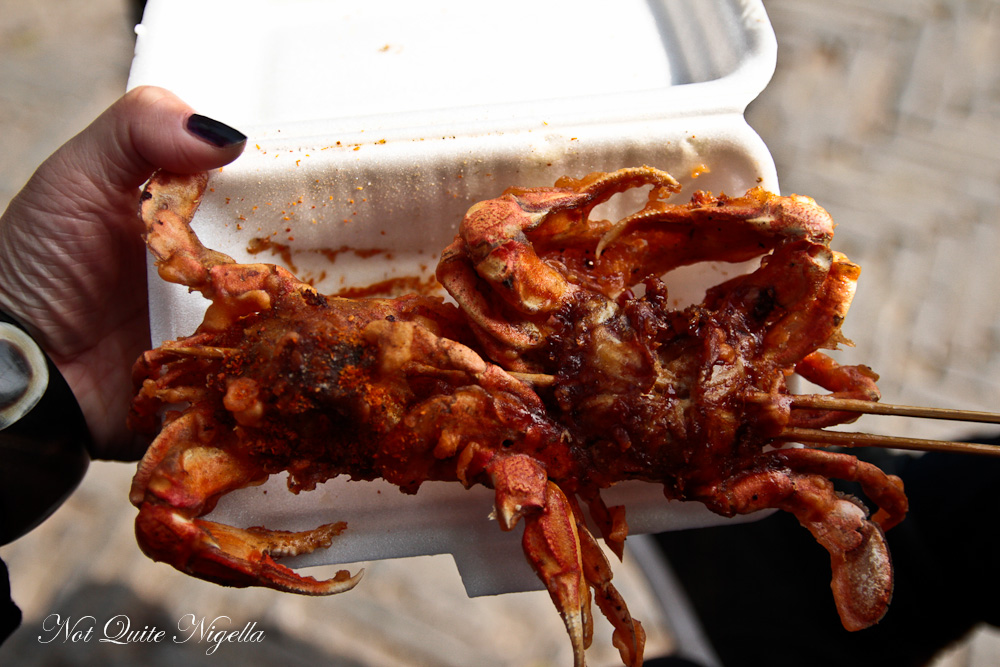 On the left is a spicy seasoning and the right is a sweet, salty seasoning. The legs are good and you eat them shell and all but the bellies hold the prize of soft, flavoursome meat. We sit down and watch the river and a man passes by scooping algae from the water which he will later sell. 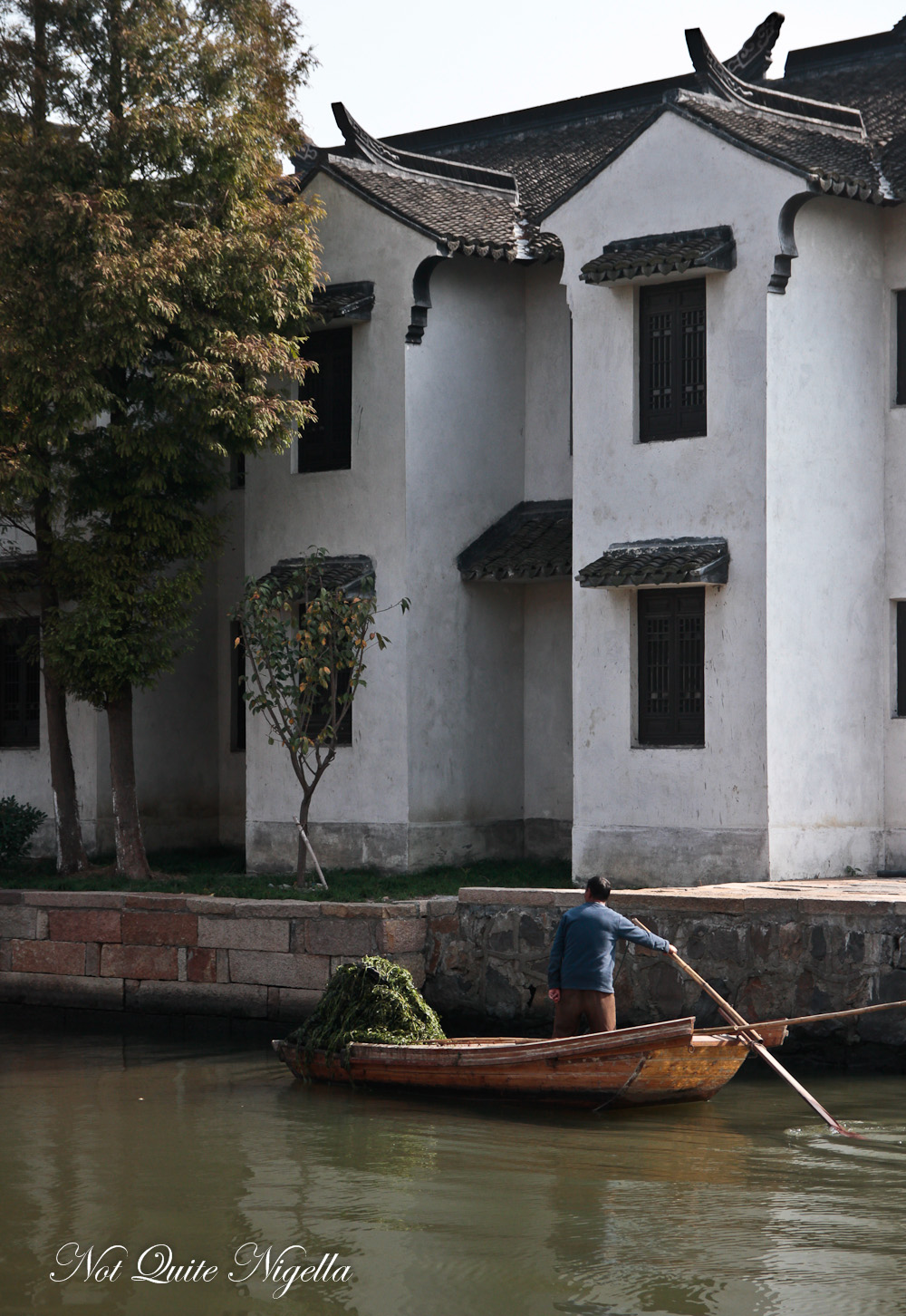 We try some freshly pounded mochi rolled in a fine peanut powder. It's so soft and melts on the tongue and the peanut powder is delicious. 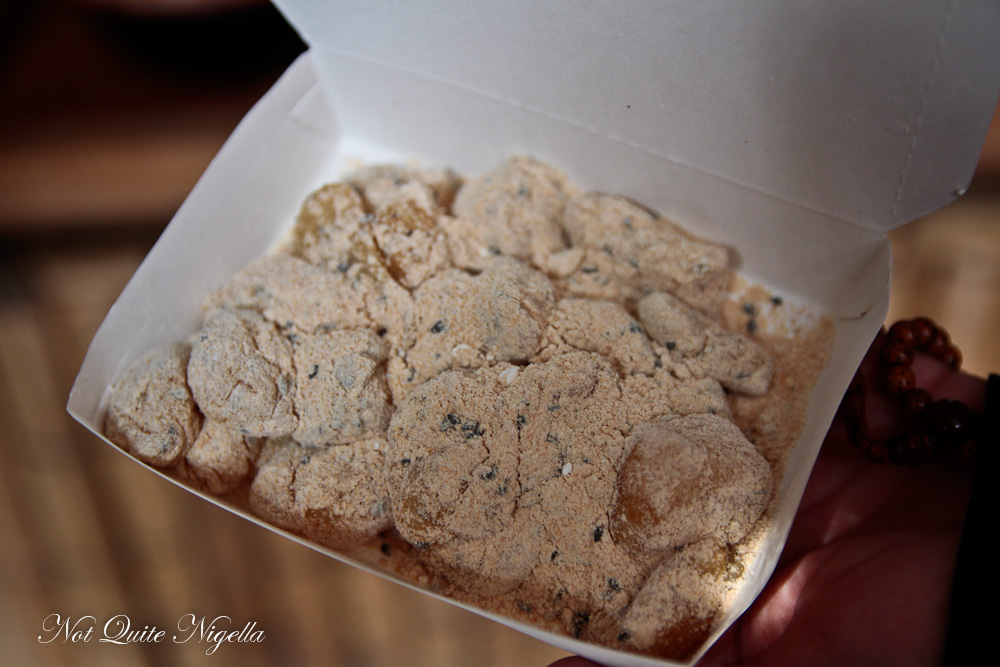 Stopping for a liquid refreshment we try some coconut milk and it's literally just that, served without sweetener. A complete surprise is the wheat roti filled with preserved vegetables. We didn't expect much but we all loved this flavoursome flatbread. 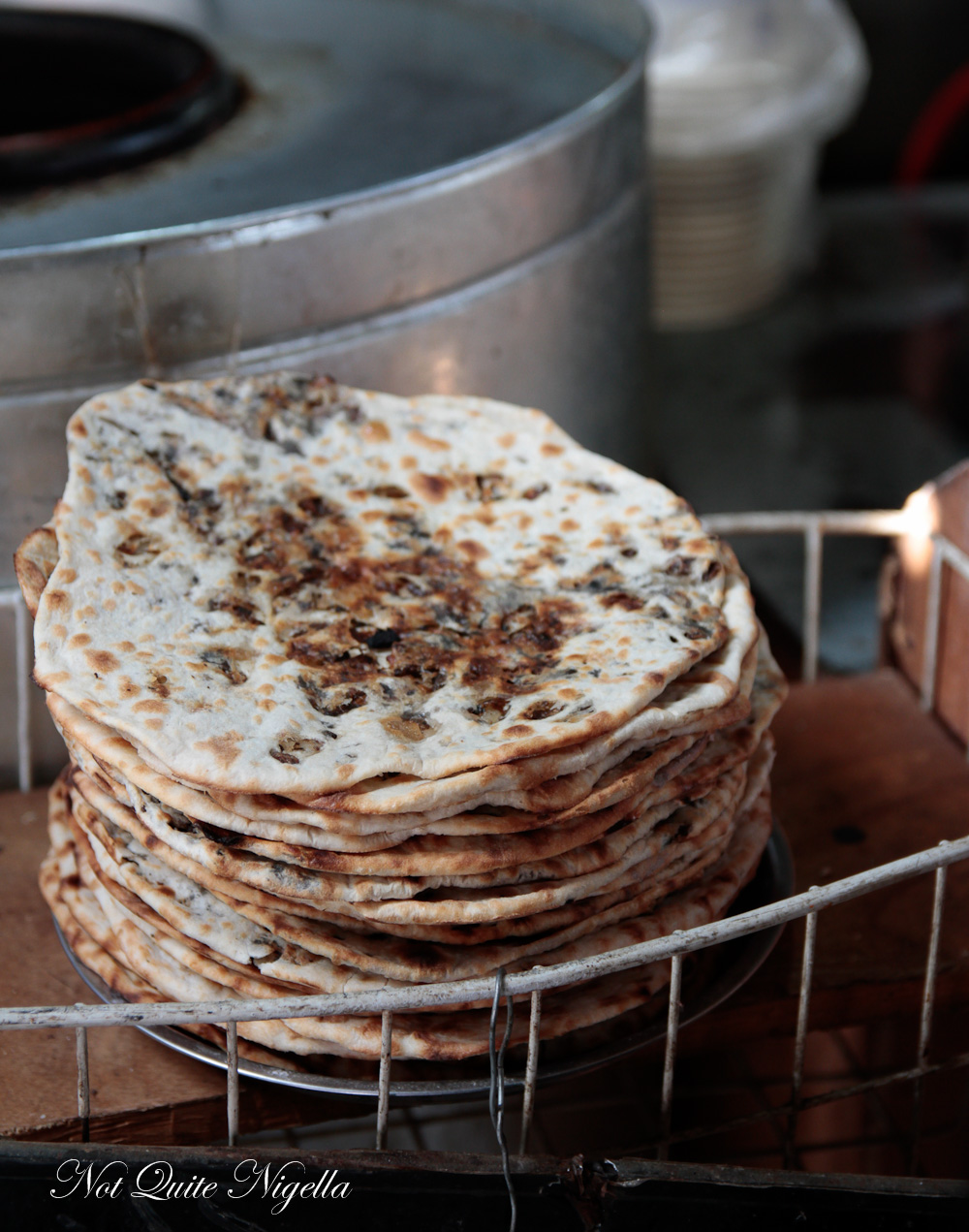 I see giant crispy rice cakes and we also pass slightly unusual offerings like deep fried pupae. We try a thin tofu skin wrapped pancake and it is filled with egg and rice - it's like fried rice in a different form. 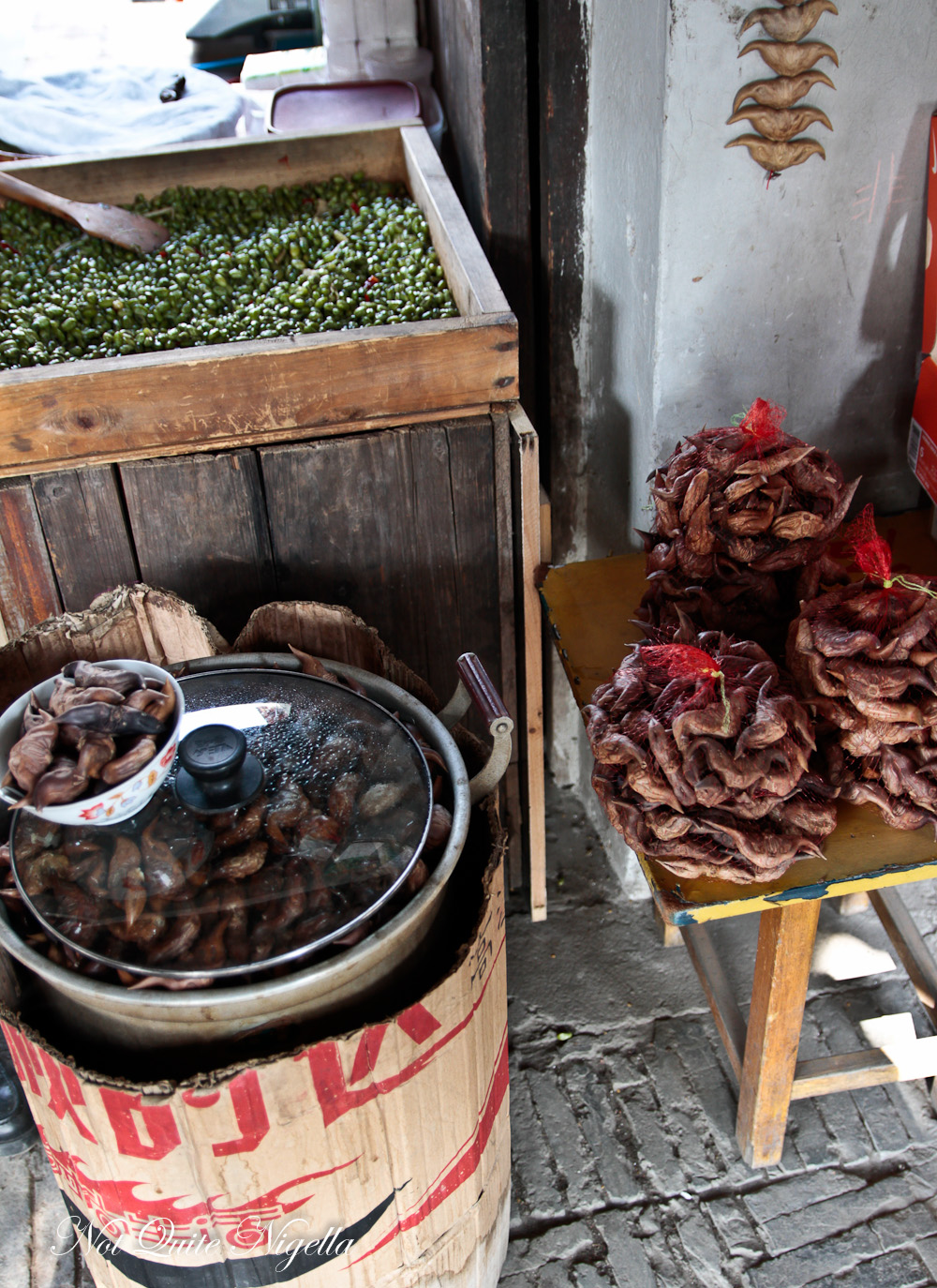 Heidi asks if we have ever tried this vegetable and we admit that we haven't. In fact I thought that they were bird heads at first. They're shaped like a moustache and they serve the young ones raw or the older ones steamed. To eat them you break them open in half with the weakest point at the centre and suck the floury meat out. The smell is a little like garbage while the flavour is a little bland. I don't think I'd rush to eat these again. 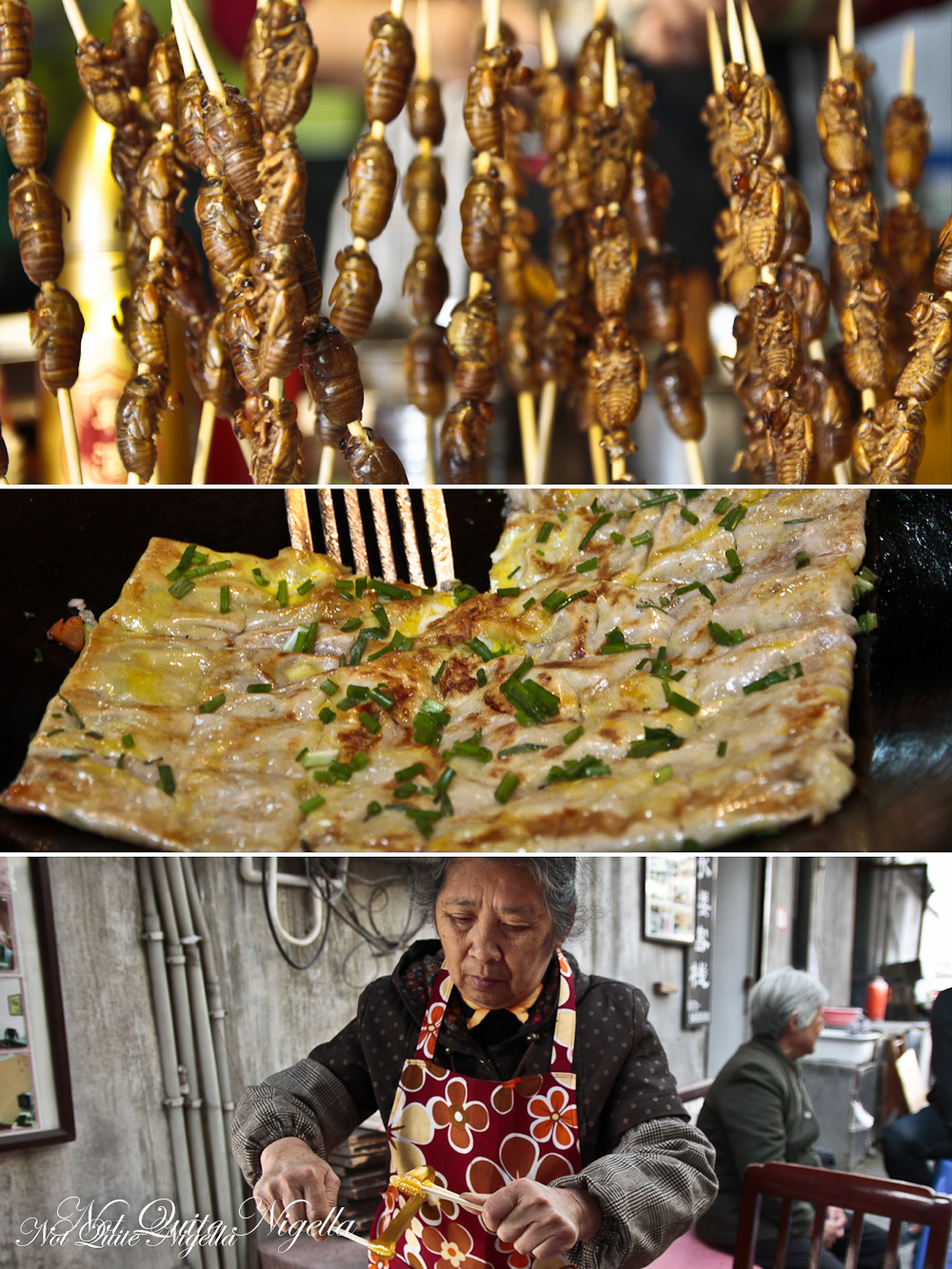 We see lots of people holding candy sugar toffee, a woman warns us that we need to keep twisting the sticks together and we buy one. 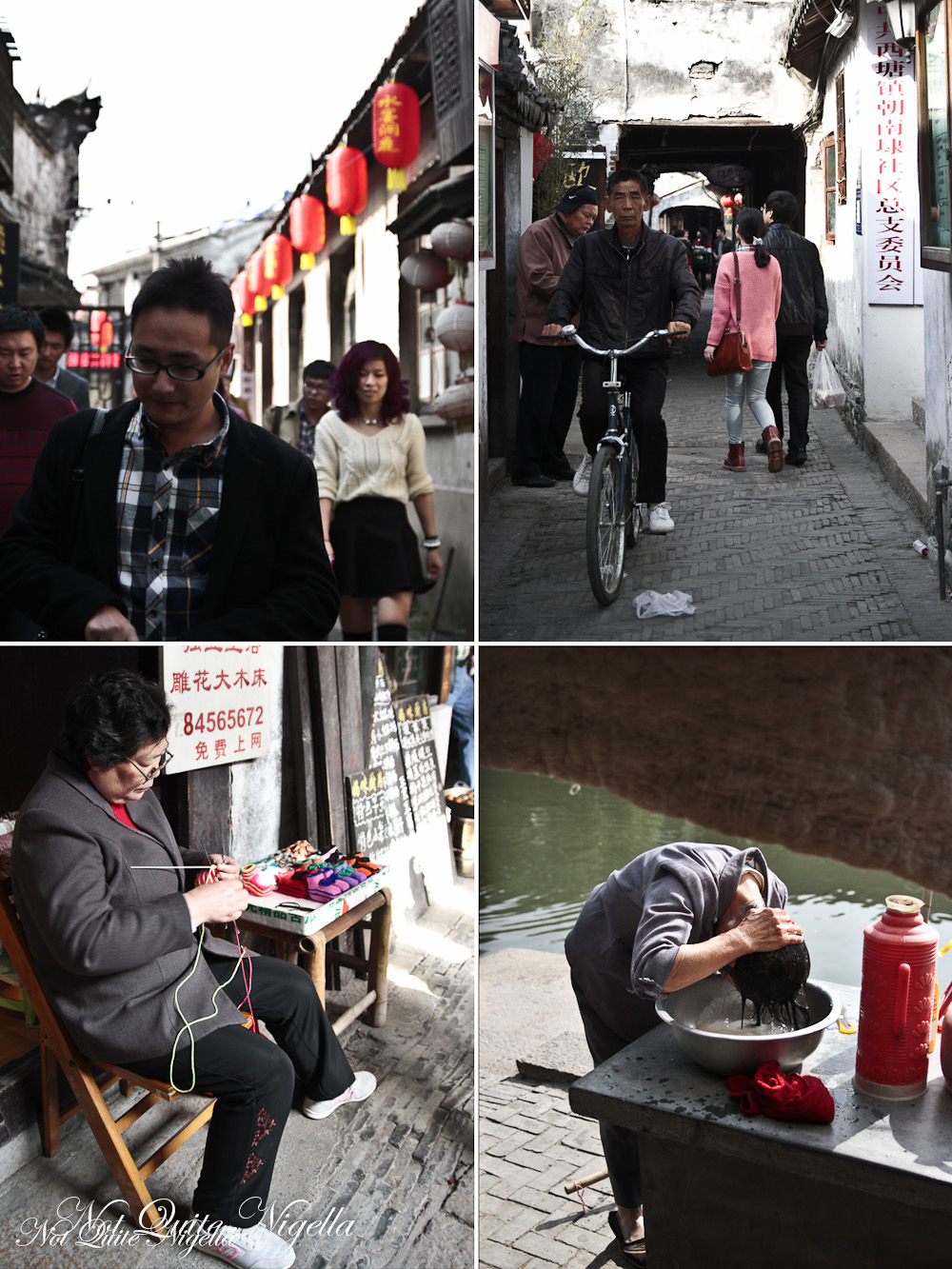 The town life goes on all around the tourists and a woman washes her hair in a bowl. Those seeking tranquility stay overnight at one of the many lodges once most of the visitors have left. During the day it is densely packed with tourists jostling elbows and shoulders. 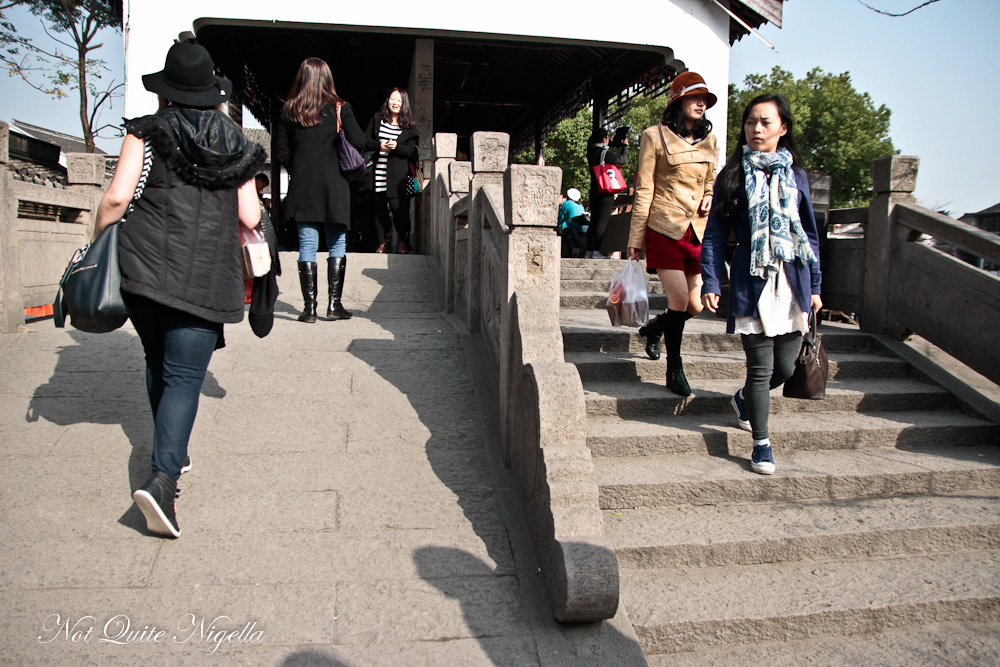 We cross the bridge which once divided genders. On the left is the side that women with their bound feet were to cross and on the right are the stairs for men. 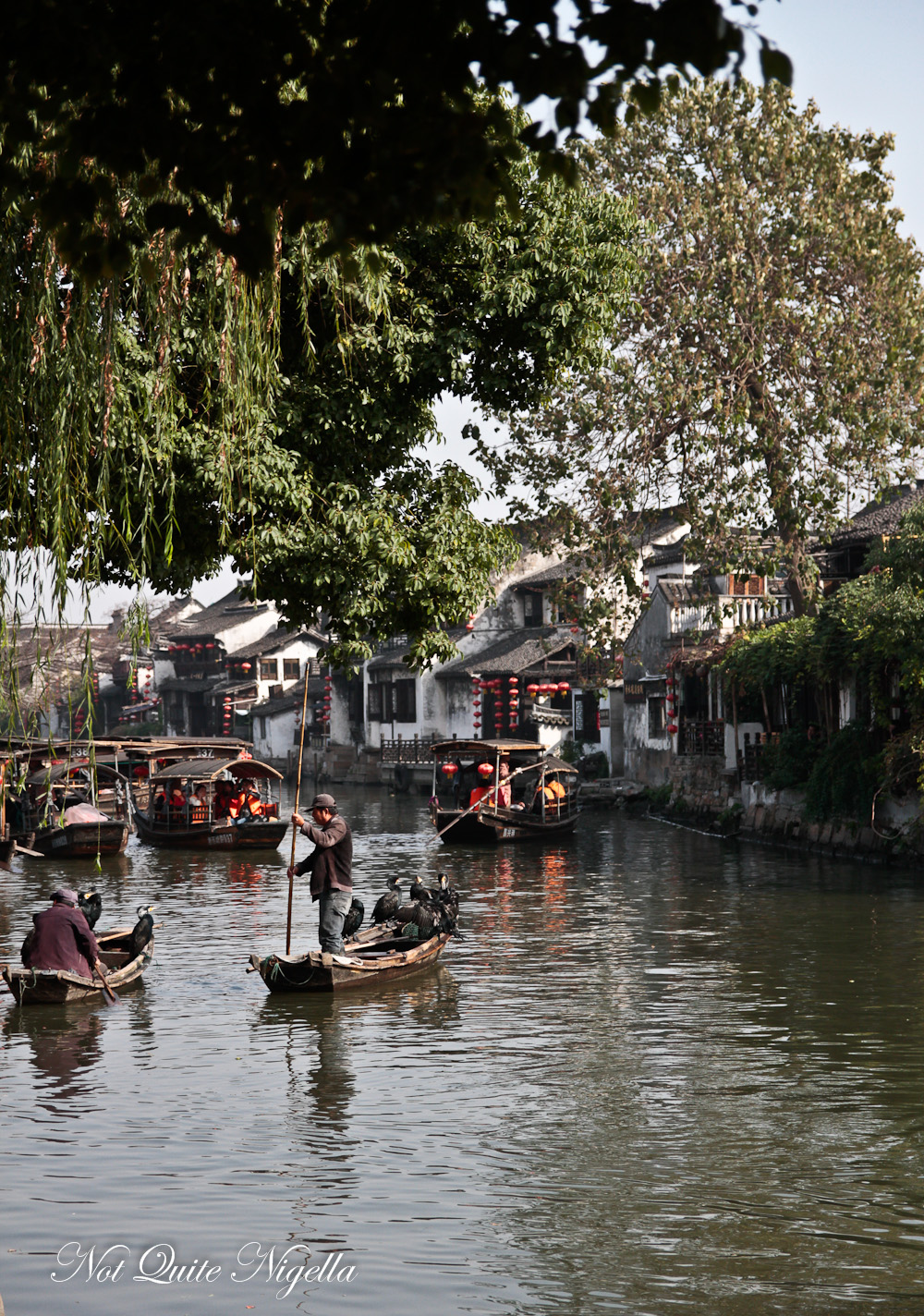 By now our legs are weary and we stop at a cafe for a drink. We go upstairs and it's a strange little room with nothing on the walls and other people are eating fruit that they've brought. Julio Iglesias's "To All The Girls I Loved Before" plays on repeat and after the third time playing it in a row, we wonder if they'll keep playing it all day. We finish our drinks and get up to leave when it comes on for a fourth time. 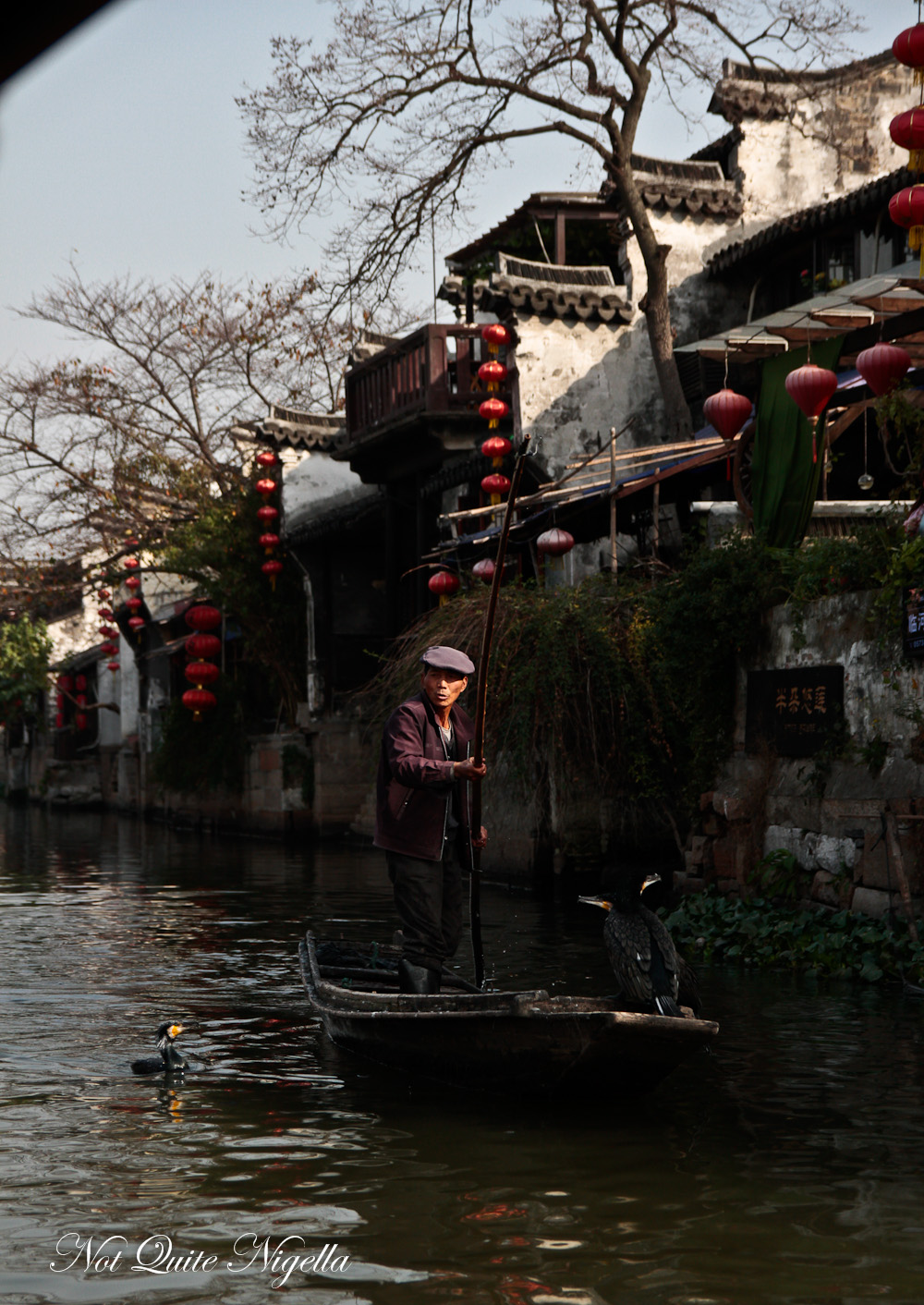 It's time to hop onto one of the boats for a leisurely cruise down the river. A ride is 150RMB/$26AUD per boat but it's a nice way to avoid the crowds on land. It is so leisurely that for much of it, it's really drifting down the canals. And like a version of Groundhog Day, we hear the faint strains of Julio Iglesias singing "To all the girls I loved before." 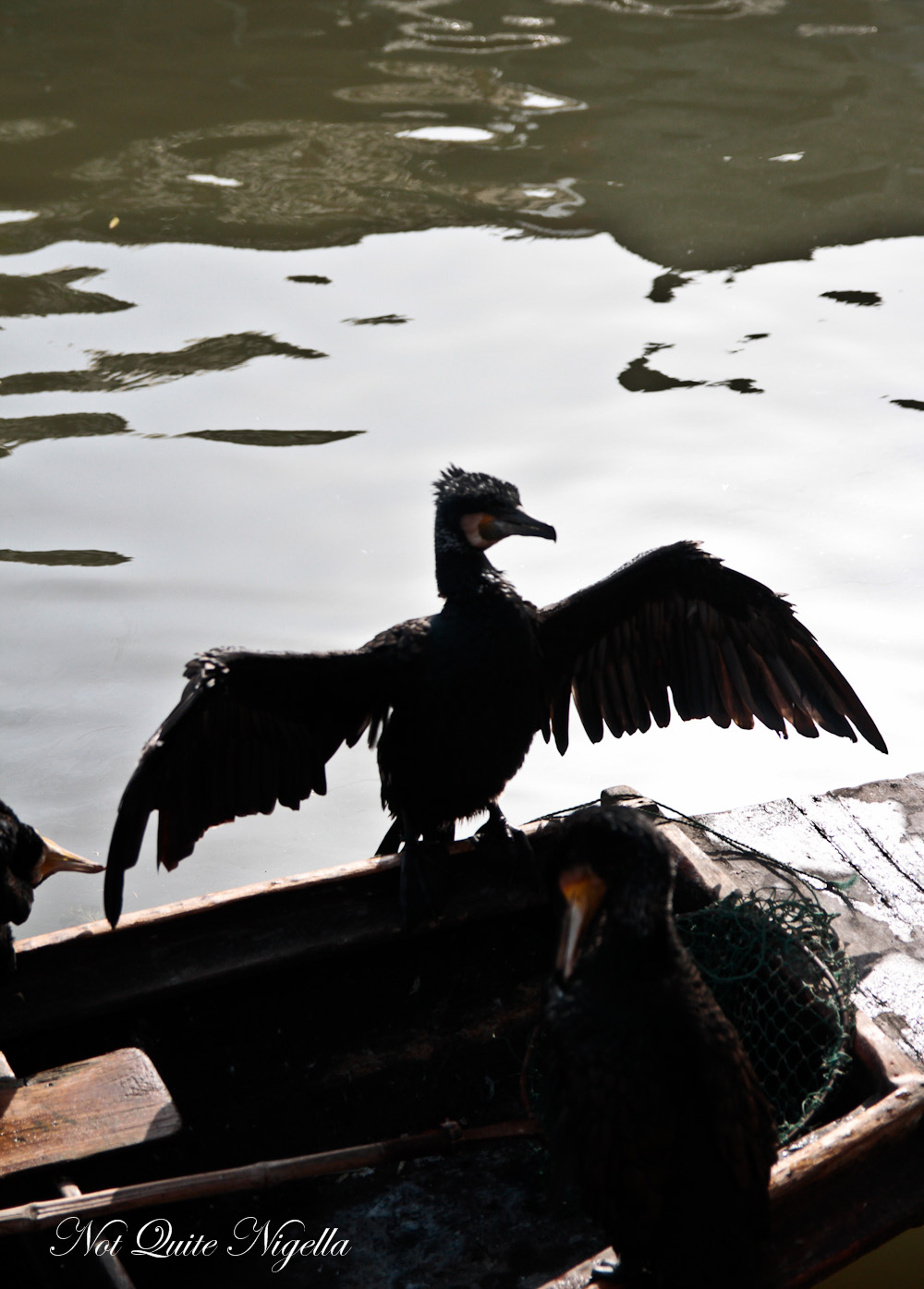 We pass a boat where a man has five cormorants that are trained to catch fish. Sadly, their throats are constricted so that they can't eat the fish. The fisherman taps the water with the stick and the birds dive in to catch fish. 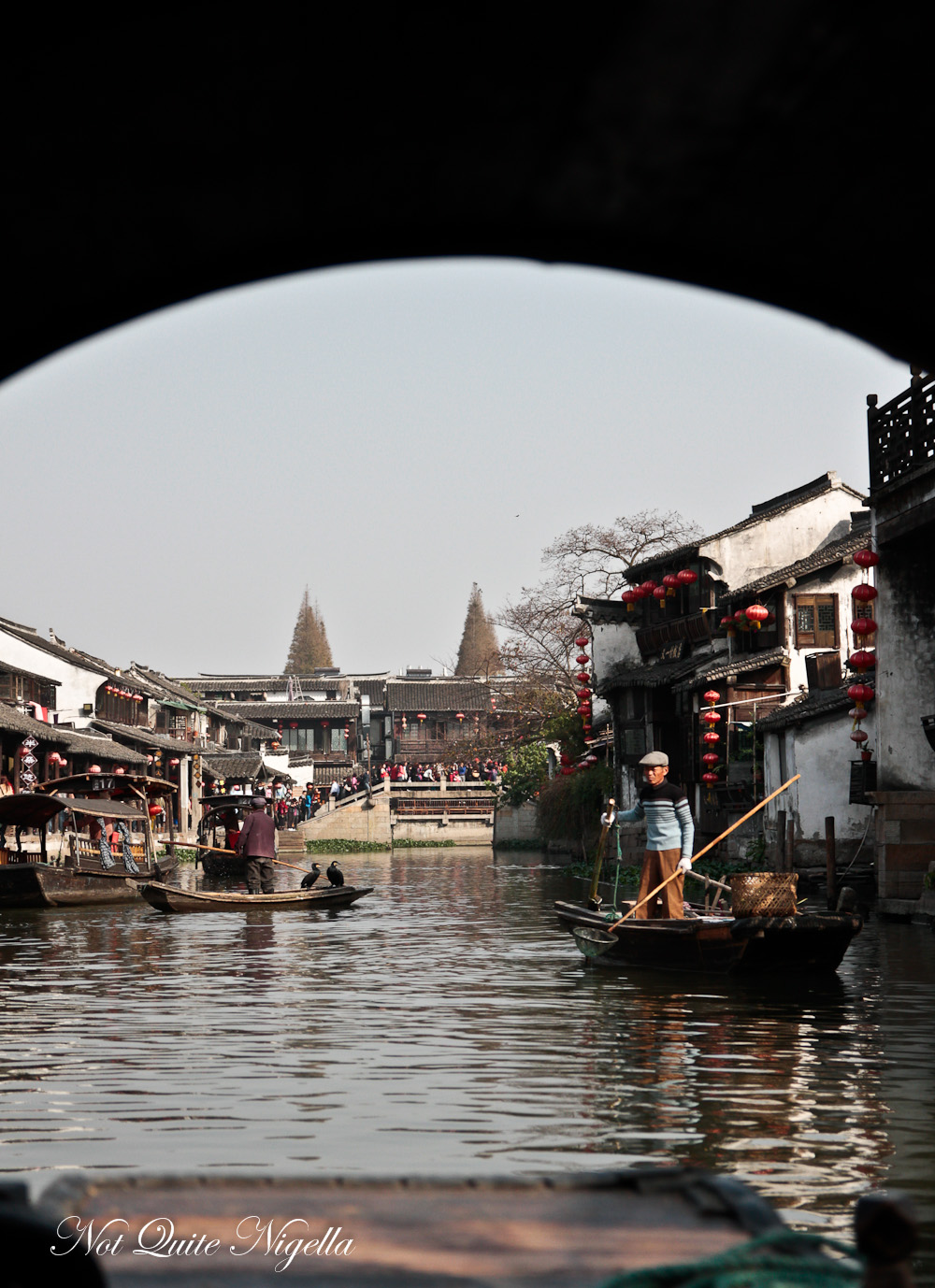 We drift under stone bridges - Xitang has 27 of these stone bridges. Our gondolier drops us off at a wharf and we make our way back to the car park following Heidi and Chu because quite frankly Laura and I have no idea where we are going. 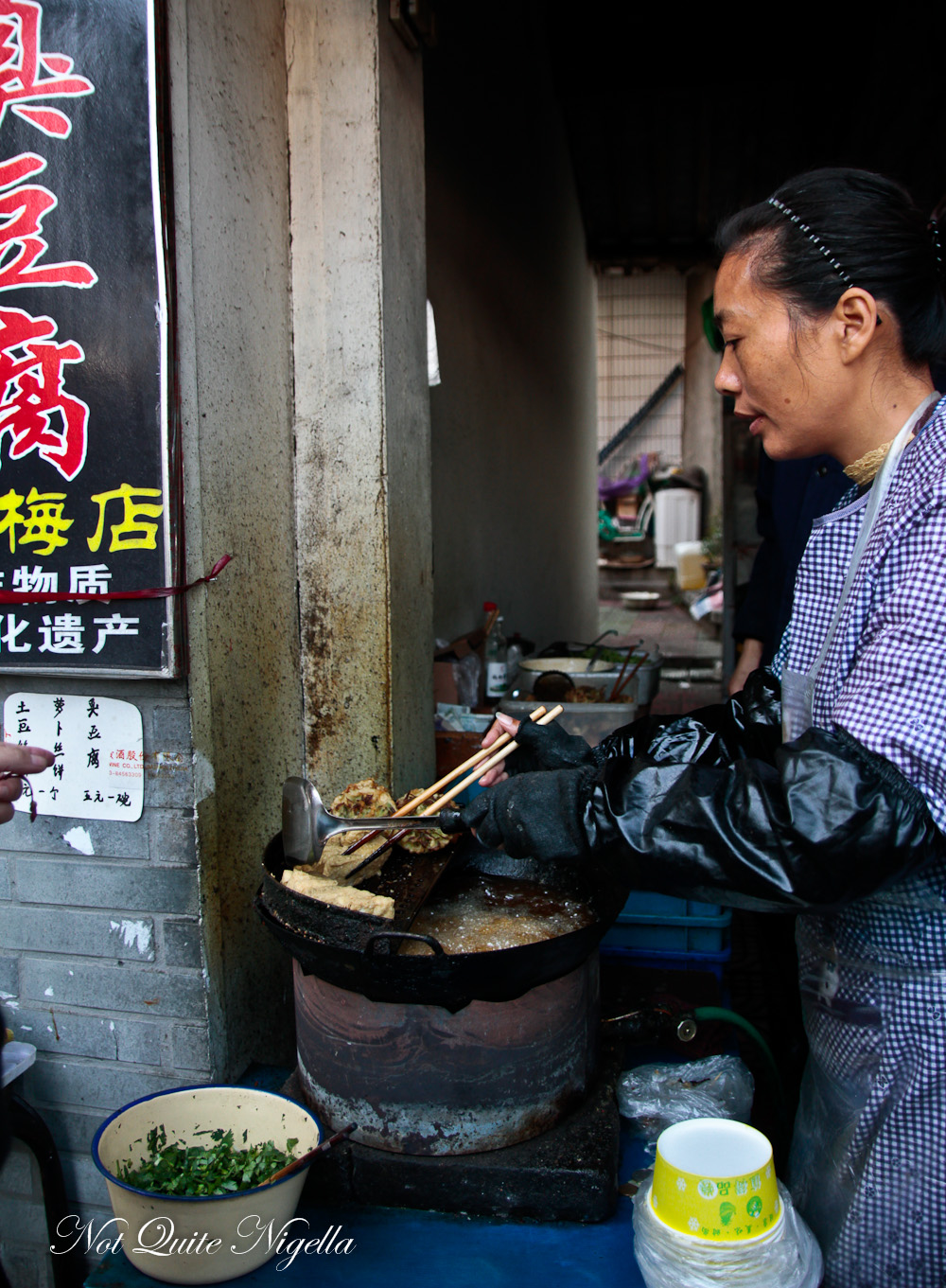 And then we come across it. The stinky tofu. The smell of garbage and sewers wafts in the air and I exclaim "It's the stinky tofu!!". Stinky tofu derives its smell from the fermenting liquid which is made up of fermented milk, vegetables, dried shrimp and meats and can be marinated for weeks or months. The squares of tofu are deep fried and sauce brushed on top. I gingerly take a piece speared with a toothpick. I sniff - there is no smell except the aromatic spices and it actually smells delicious. 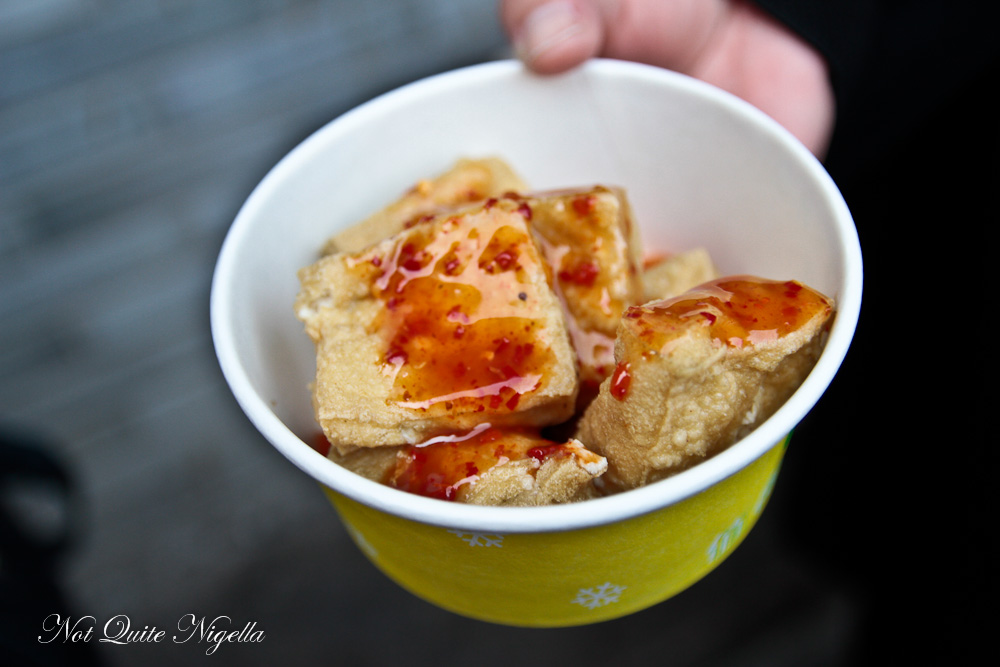 Heidi tells us that today, stinky tofu doesn't smell anywhere as stinky as it used to and they're all quite mild. I take a bite and then another. It's delicious and despite how scary it sounded initially, absolutely delicious.

So tell me Dear Reader, would you try stinky tofu? And how do you feel about smelly food like durian? 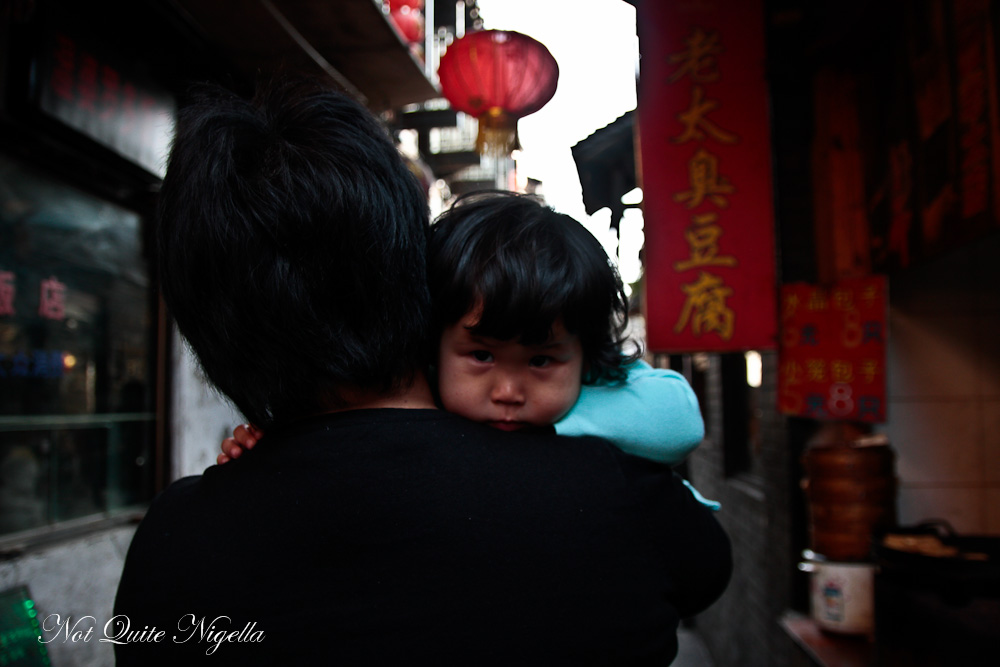 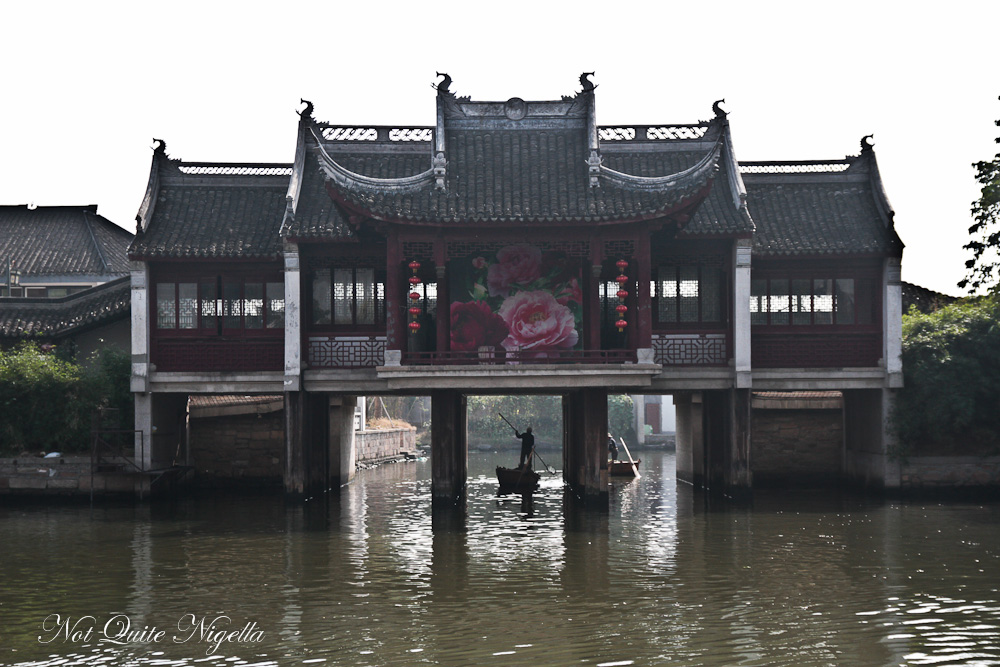