On The Eve of Mid Autumn Festival, Guilin, China 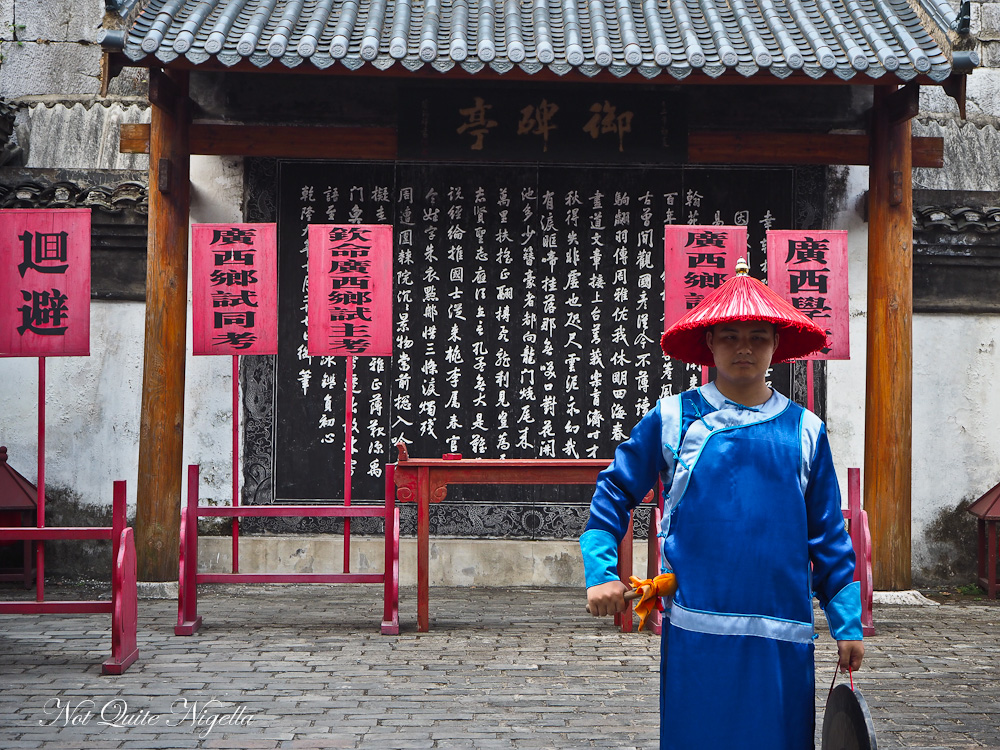 The name Guilin means Osmanthus Forest and the mountains and trees form an disarmingly beautiful backdrop to the city. The mountains or karst topography abruptly rises up from the ground with craggy, creviced, well worn surfaces, a palette of greys and greens. Come Spring the smell of the yellow blossoms of the osmanthus trees perfume the streets. 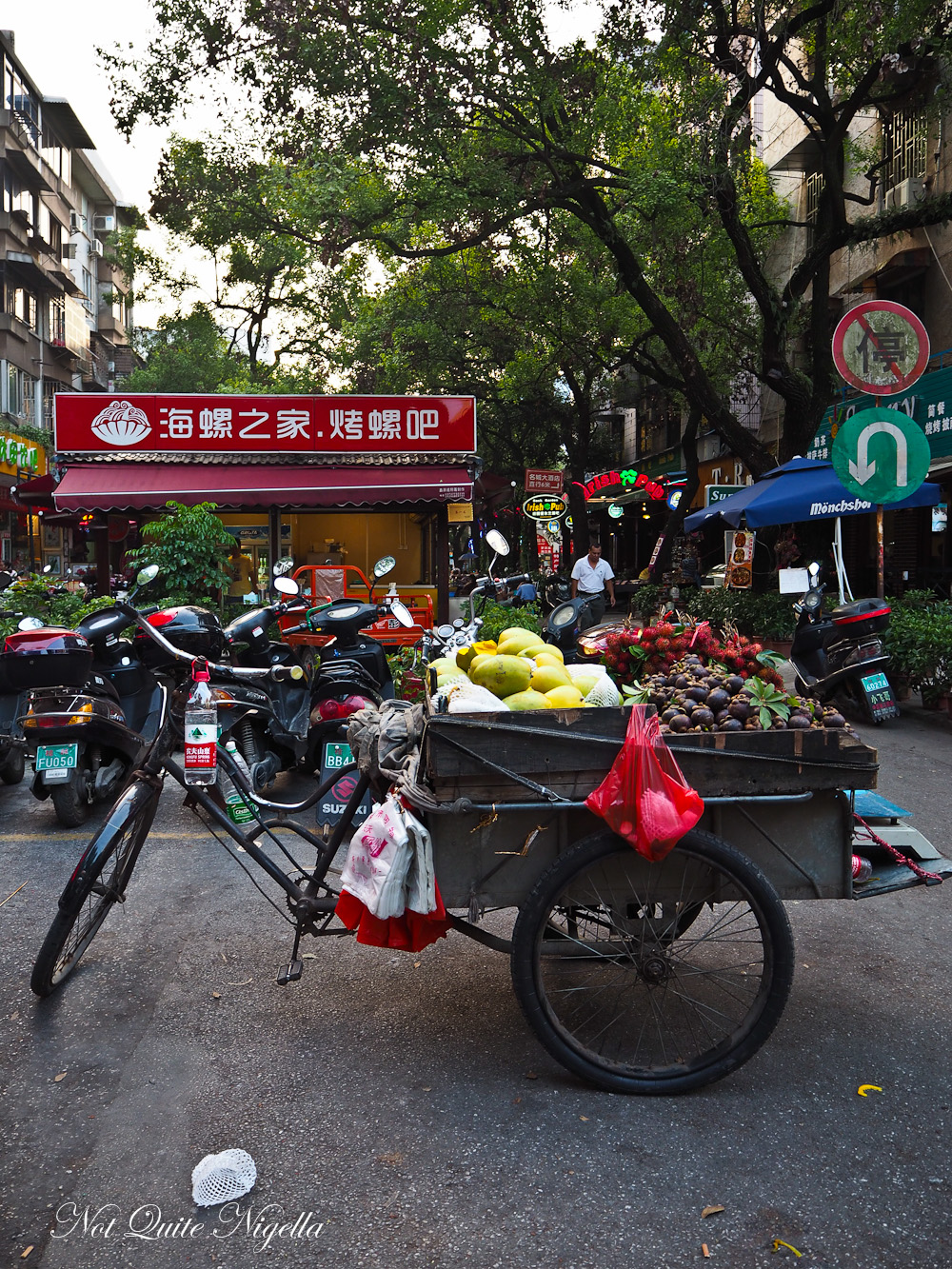 For a country as populated as China, Guilin's urban population of 800,000 in the city area must appear Lilliputian compared to megalopolises like Shanghai with an urban population of 21 million. But Guilin is just as bustling as any other enormous city in China. 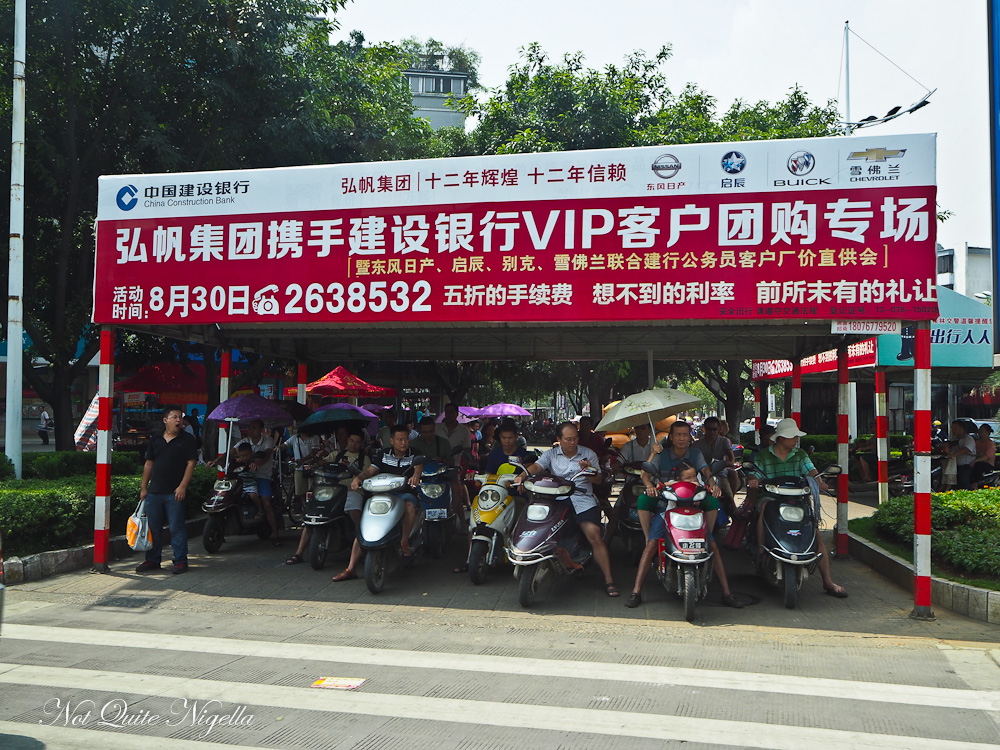 You see it's the eve of Moon Festival and everyone is busy getting to or coming from their other homes to visit family. We watch as families speed past on electric scooters-they're the preferred transportation in this small city. They're in the same class as bicycles here and are permitted in areas where motorcycles and cars are not. 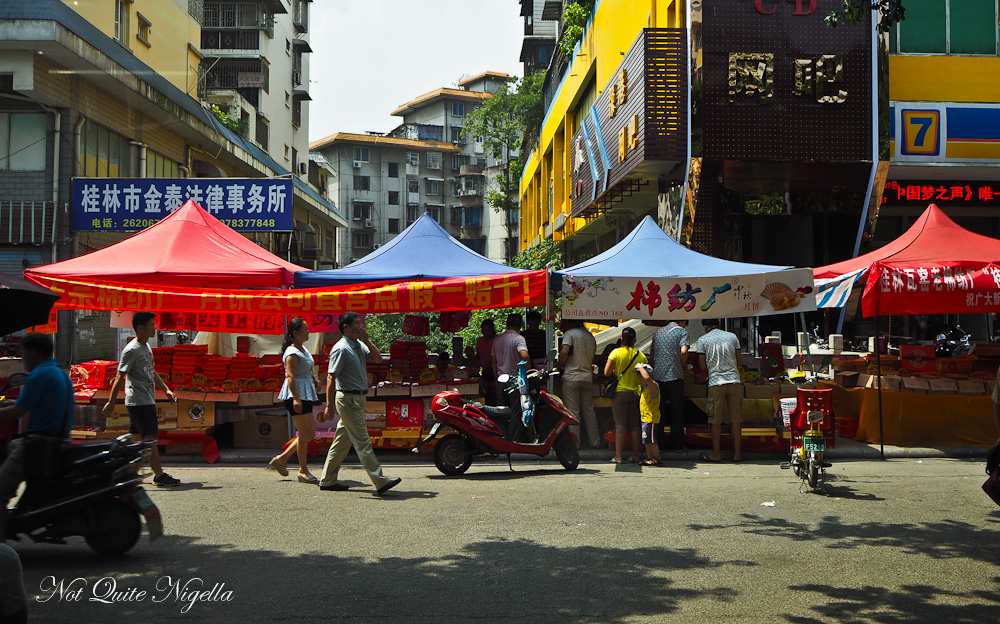 Mums wear hats or carry umbrellas and shade their babies from the strong sun. One woman has a live duck cradled in one arm, the other arm around the driver. We pass cages full of ducks loudly protesting their caged punishment. I wonder if they can feel the public holiday feast to come. Duck is an popularly eaten item at the mid Autumn festival. 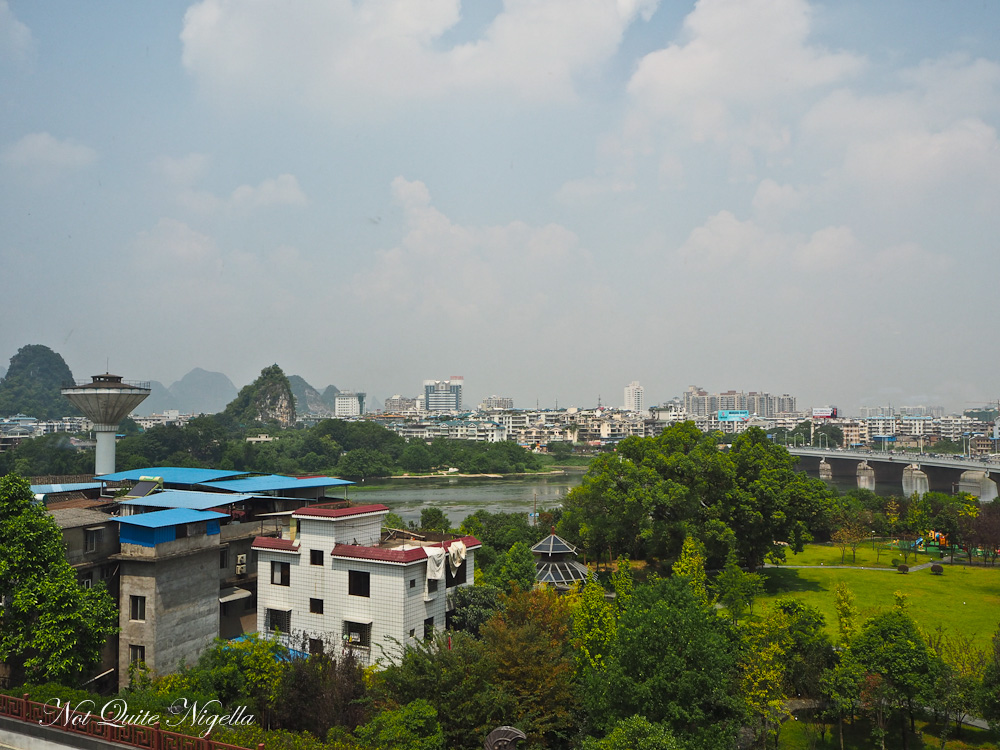 I'm travelling through Guilin, Yangshuo and Longji with Wendy Wu tours and experiencing a mixture of their different tours. Our hotel for our stay in Guilin city is the Shangri-la. It's a gorgeous hotel with spacious rooms. My room #507 has a view out to the Li River and the busy bridge scene is peppered with the faint beep of horns. 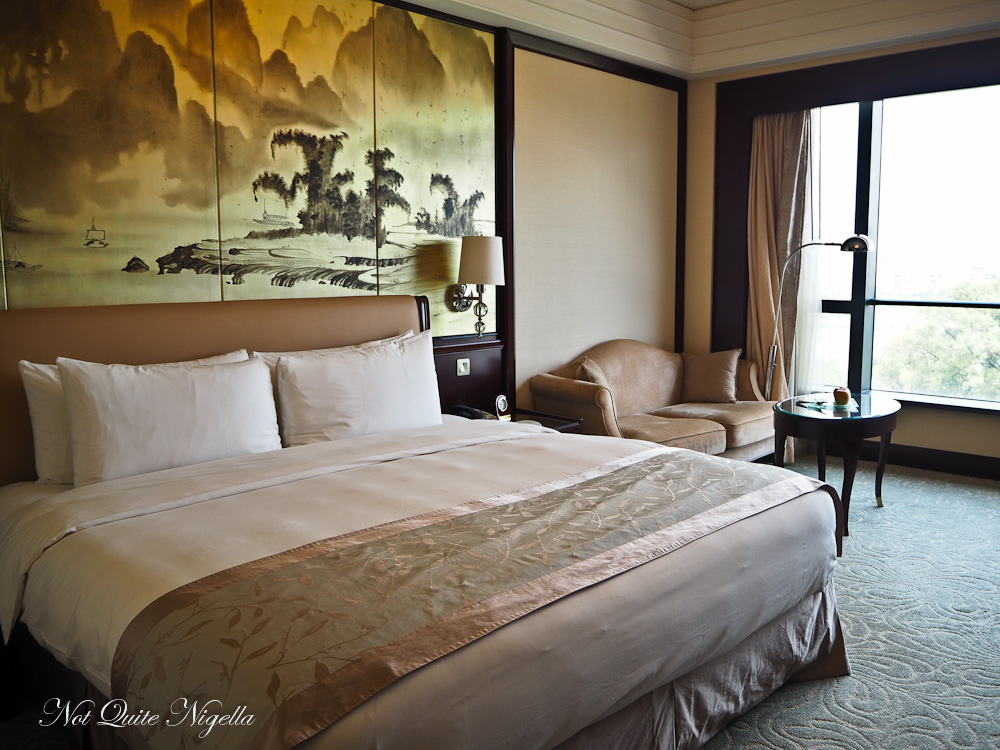 The king bed is comfortable and there are all of the luxuries that one comes to expect with Shangri-la hotels. A bath calls to me in this humidity and all I can think about is chilling my limbs and lying back. Whilst the facilities are good, the free internet is patchy and service whilst friendly often lacks follow through. 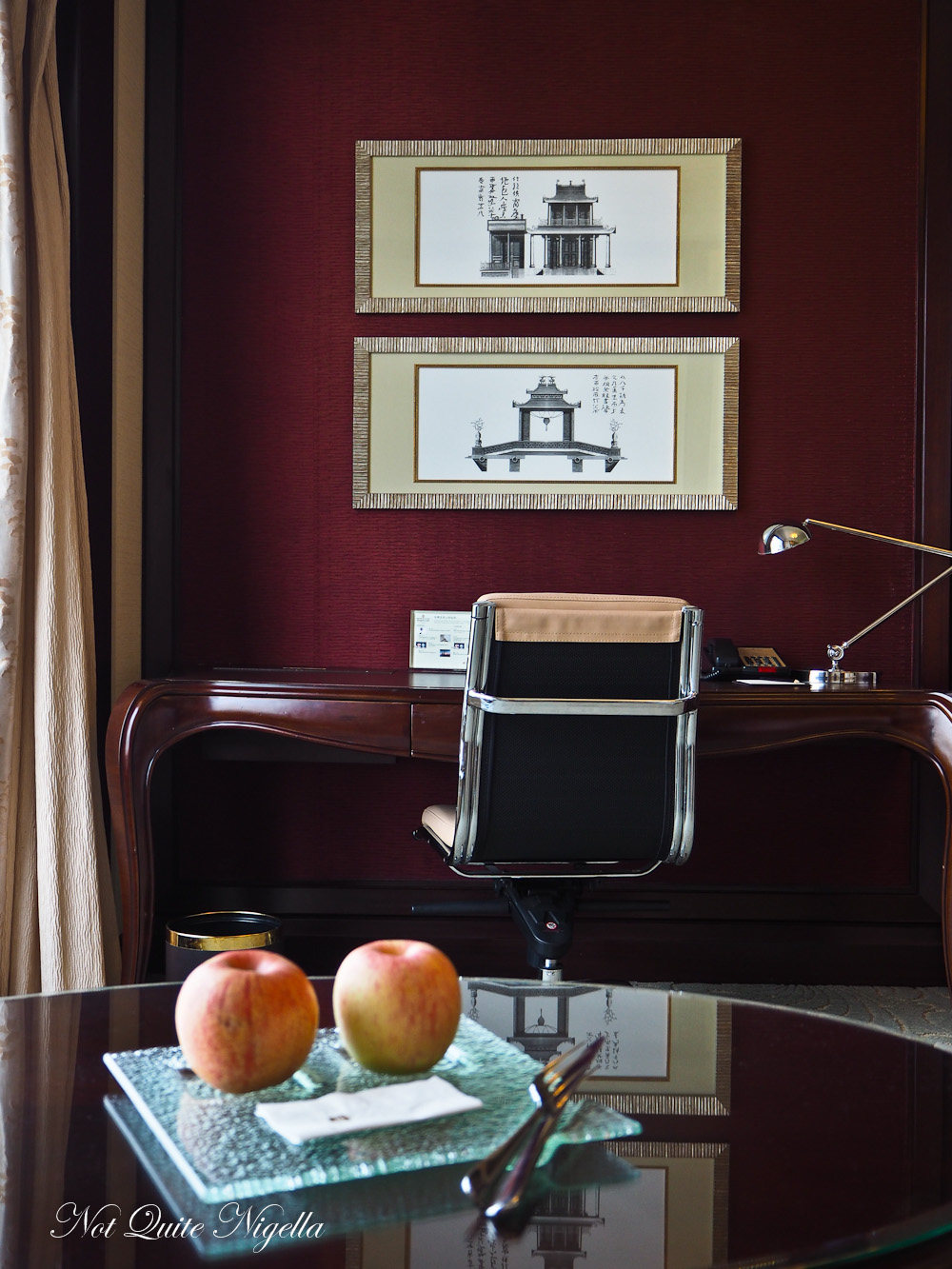 So what is food like in Guilin? In greater China there are 55 ethnic groups that make up 8% of the population. One of these ethnic tribes is the Yao people many whom have settled in Guilin. The food that is said to represent Guilin is the rice noodle which is said to have been invented by the Yao people since the Qin dynasty. Our guide Maggie explains that when Qin Shi Huang sent troops to the region they were unaccustomed to the local food and rice noodles were prepared to satisfy their rice cravings. Rice flour was also easy to transport. 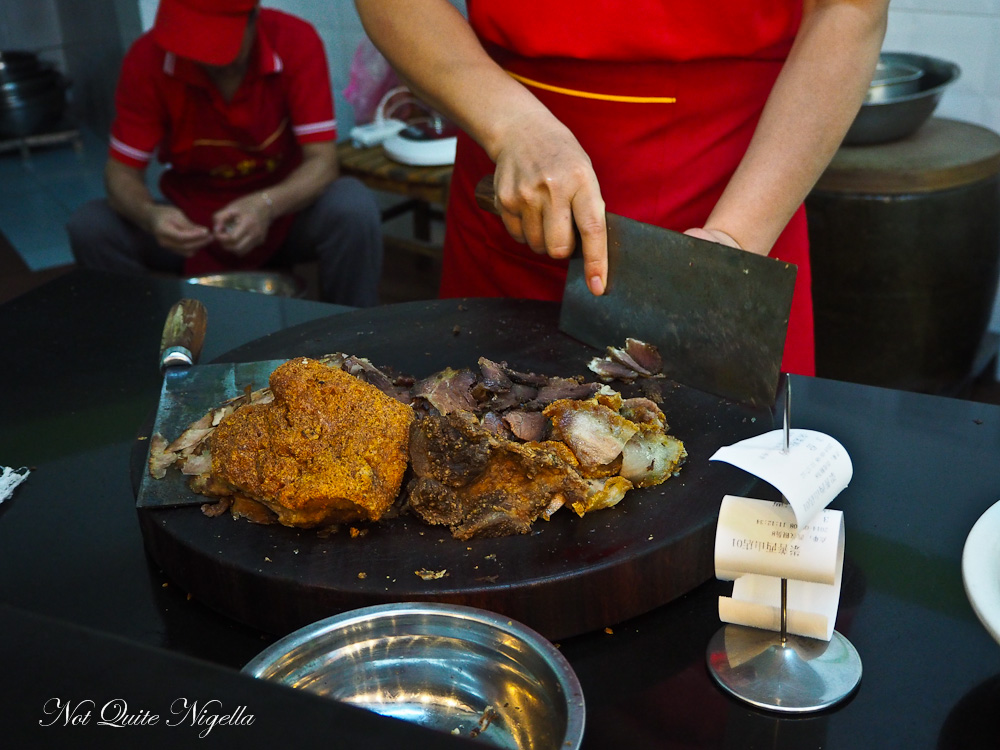 Nowadays Guilin's rice noodles are a very popular breakfast staple but can also be enjoyed for other meals. And one of the most traditional ways to eat it is topped with horse meat. We stop by Chong Shan, a small simple restaurant where we order some. 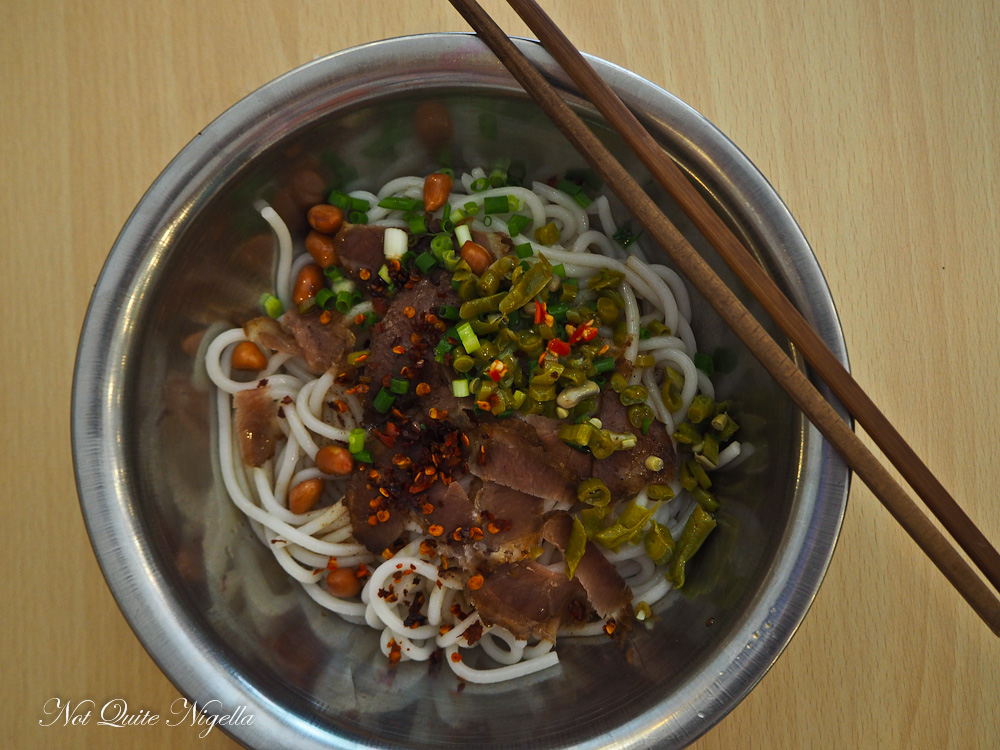 The woman cooks some rice noodles in boiling water quickly and then rinses them. After topping them with freshly sliced horse meat she adds shallots, pickles, peanuts and chilli to the noodles. They're delicious - the horse meat not unlike dried beef. 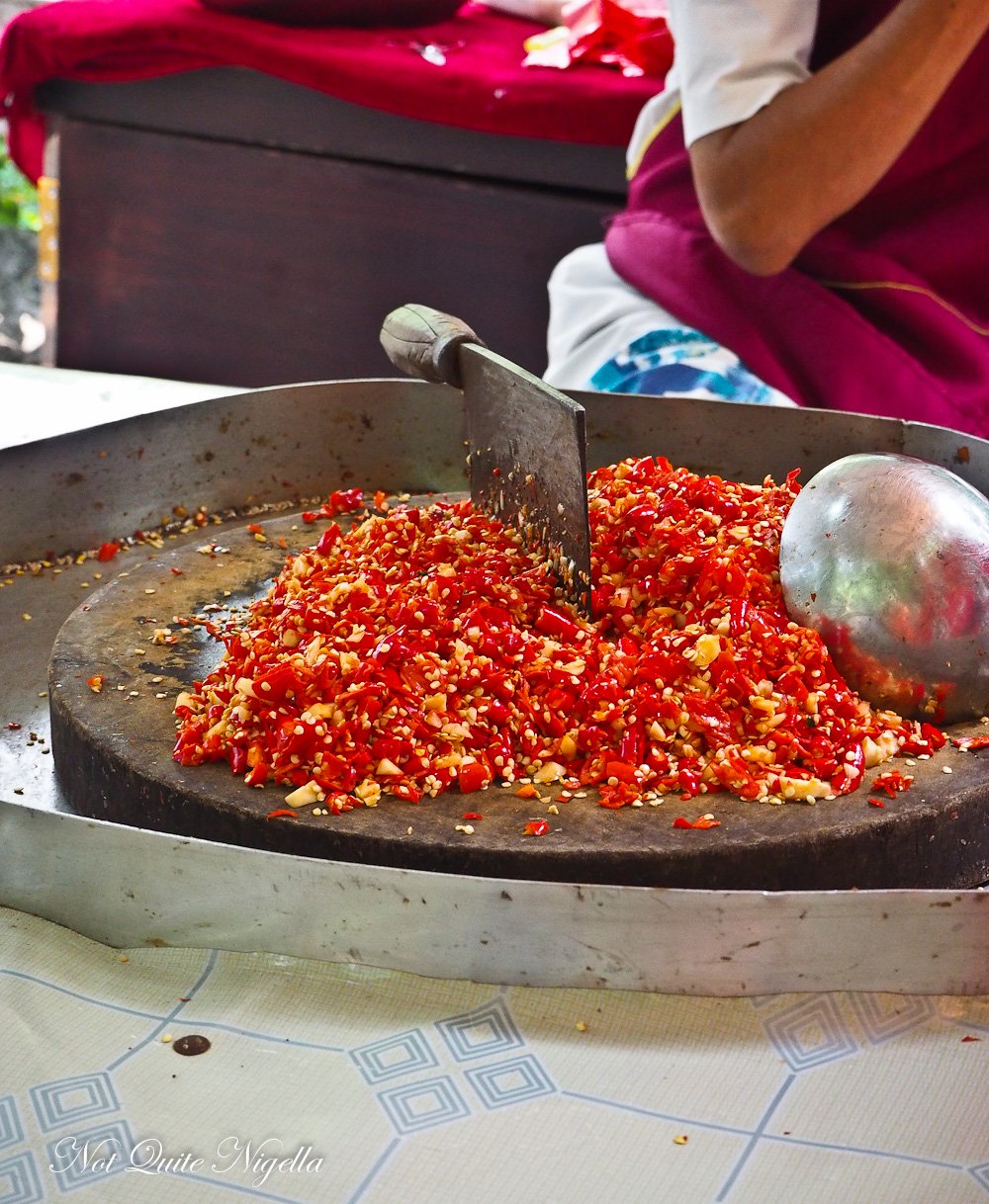 Guilin's chillies are also famous for being hot and is a mixture of chillies, garlic and fermented soybeans.We also try rice noodles at "Wei Xian Guan" which means "Taste, Fragrant Restaurant". The restaurant has been operating since 1947. We are dining in a private room upstairs but downstairs is also busy with a large array of rice wine barrels.

A pot of tea is set down at the table and there is an array of ingredients from red dates, fresh jasmine petals, rose petals, gingko nuts but the main ingredient is a fruit called luo han guo. Named after the buddha's head that it resembles it gives the tea a natural sweetness. This is followed by large bottles of Liquan, a Guilin based beer which is mild and drinkable if not small in size. 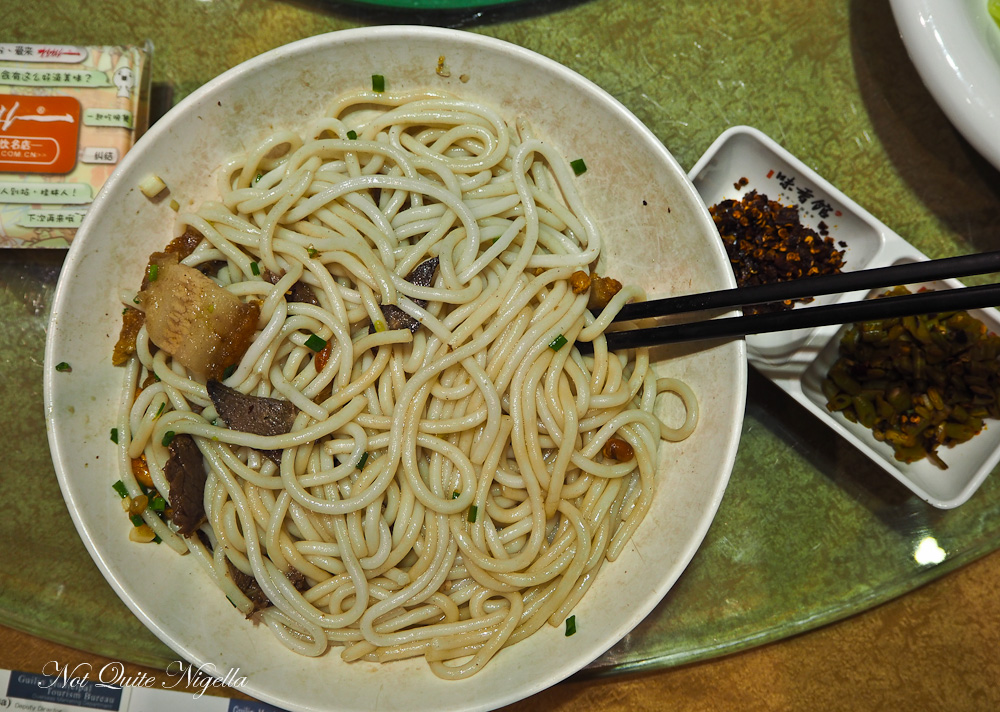 An array of Guilin's most popular dishes arrive starting with the famous rice noodles. These are served either in soup or with a small amount of soup with dried chili and pickles to the side. The noodles are wonderful - their texture is unique and the flavour is mild but comforting. 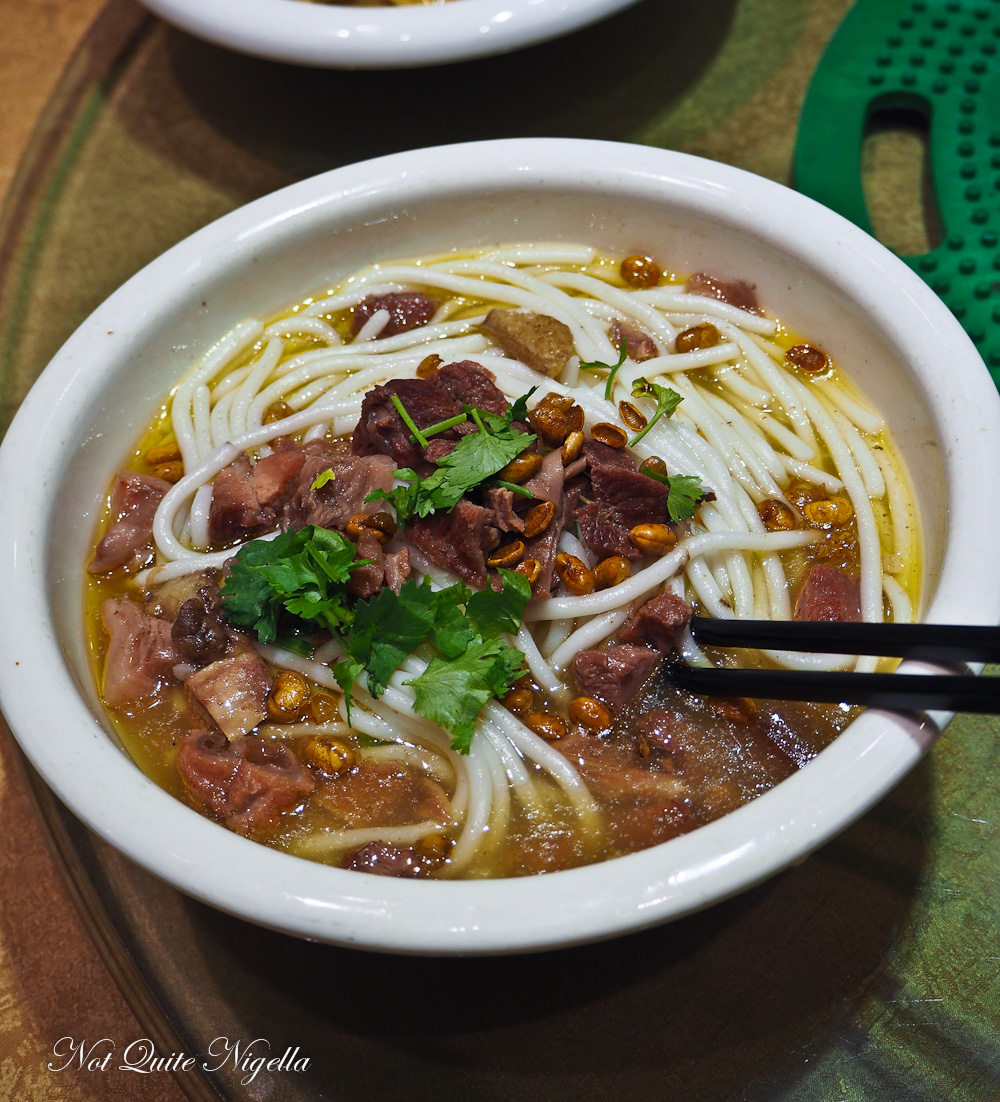 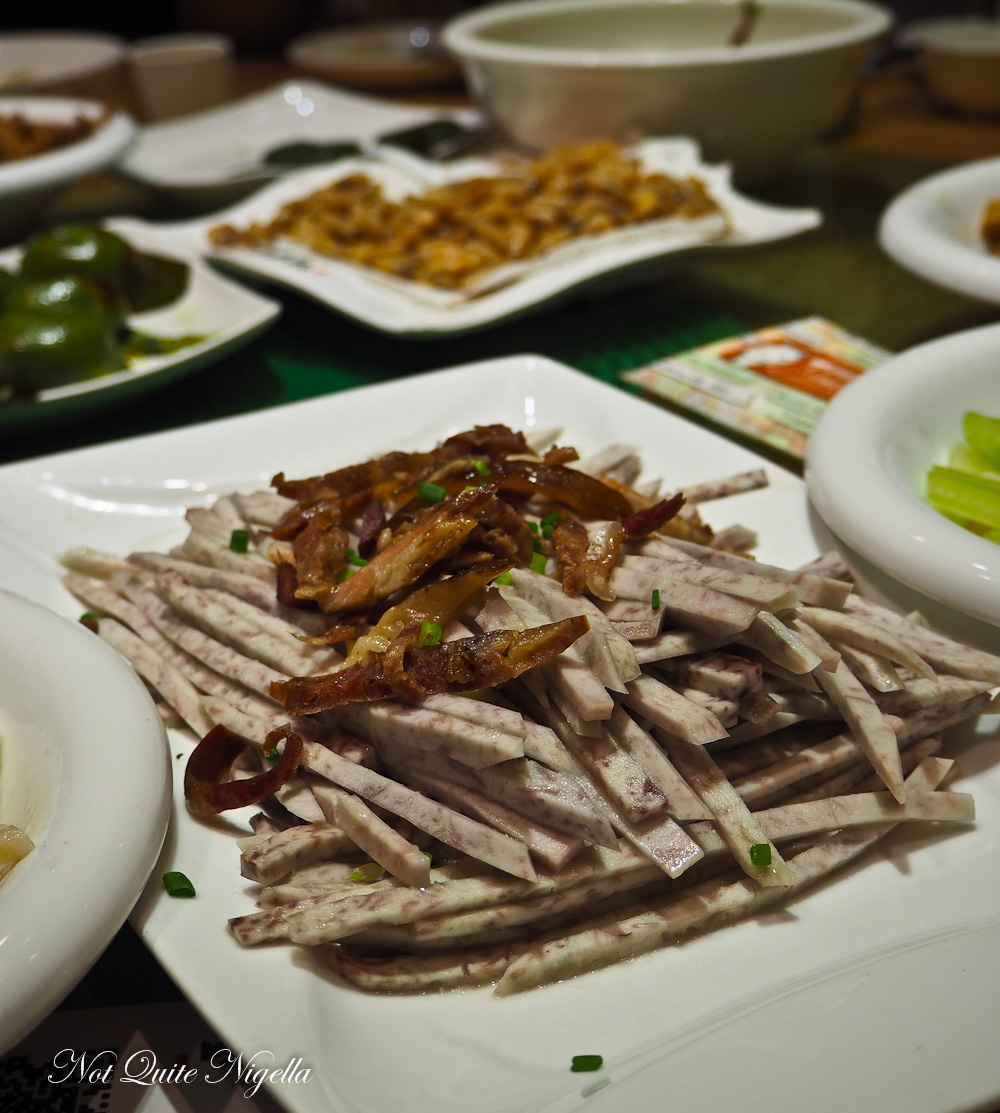 Another popular item is taro with pork. The taro is from the Lipu county and is served as thick matchsticks. The taro is topped with pork belly and this taro is some of the best taro I've eaten. 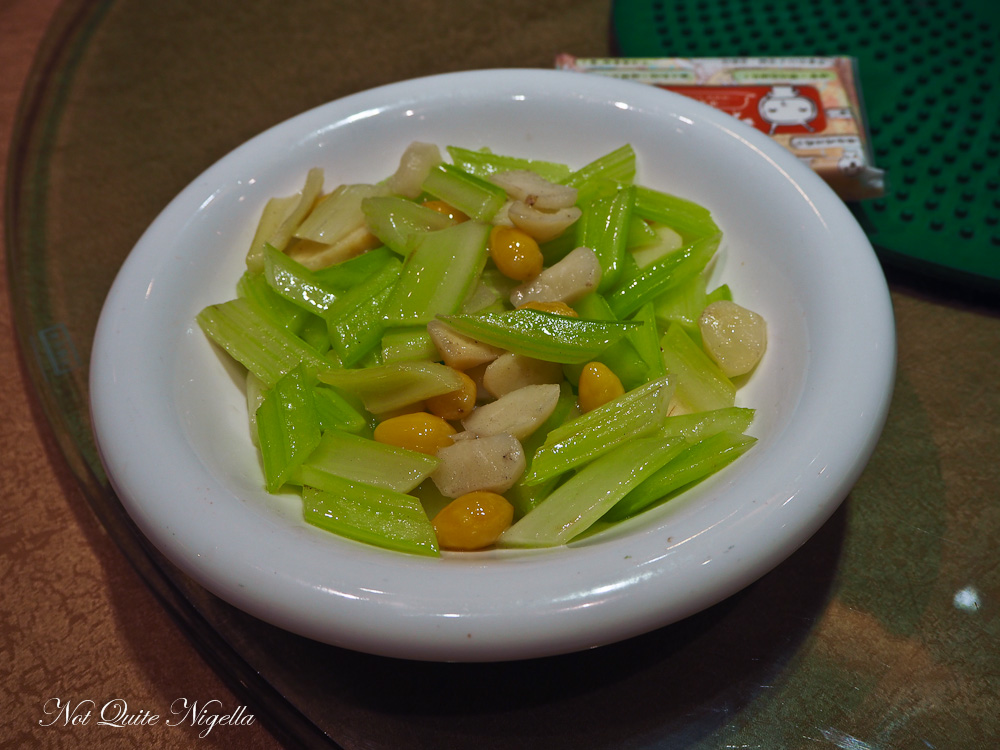 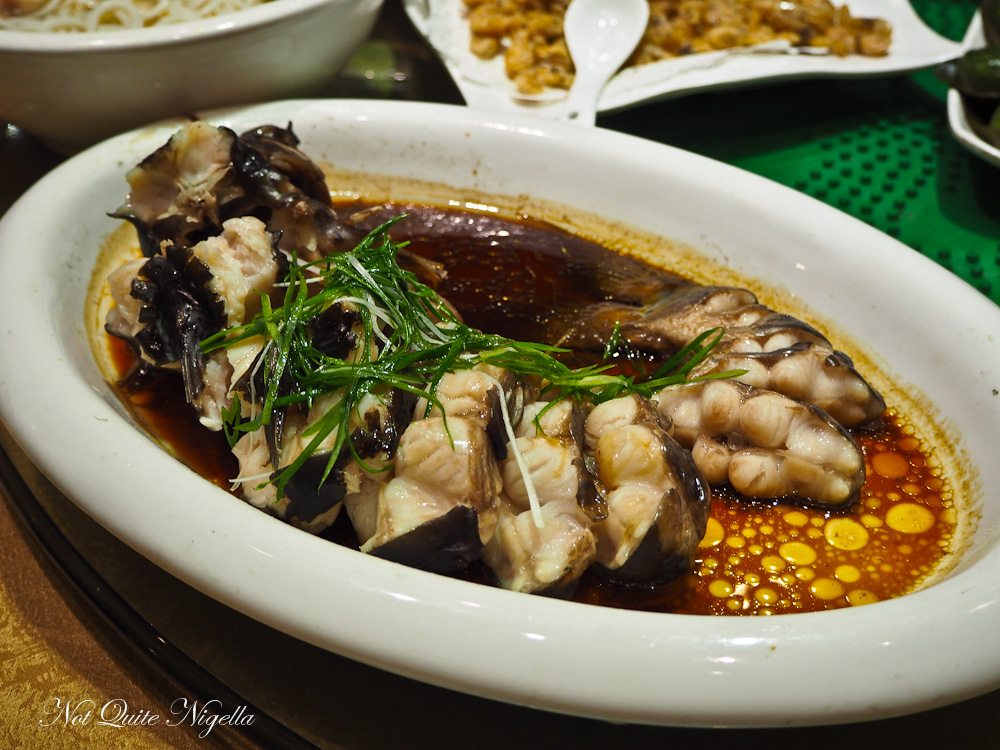 Our Wendy Wu guides Maggie and Lily have specially chosen a fish for those that don't like a lot of bones to contend with. The texture of the river fish is fantastic and this simple steaming treatment brings out the flavour and texture of the fish. 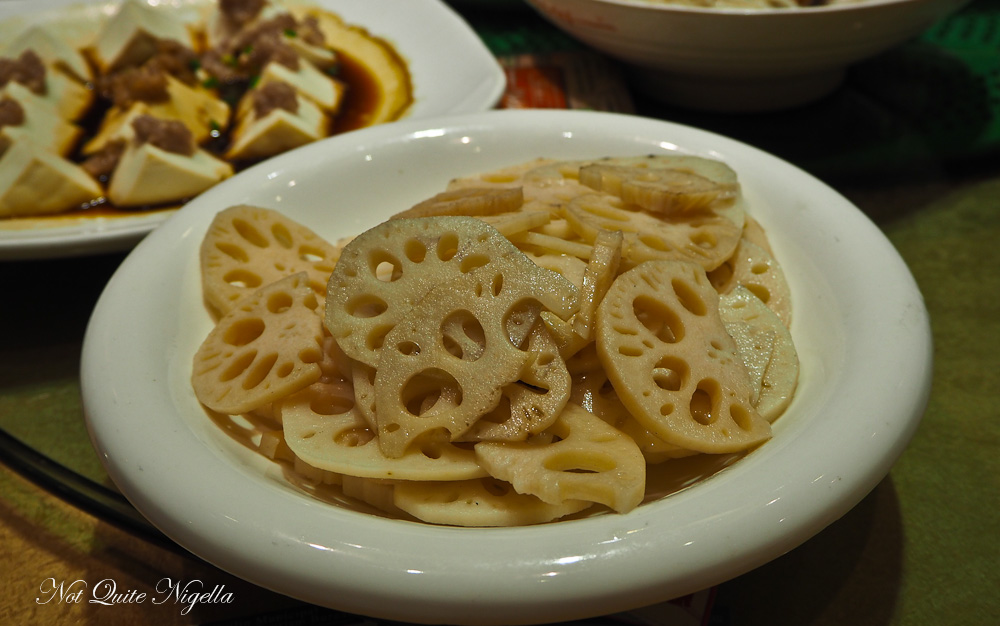 The lotus root too looks as if it wouldn't have much to offer but it is incredibly good with an appealing crunch. 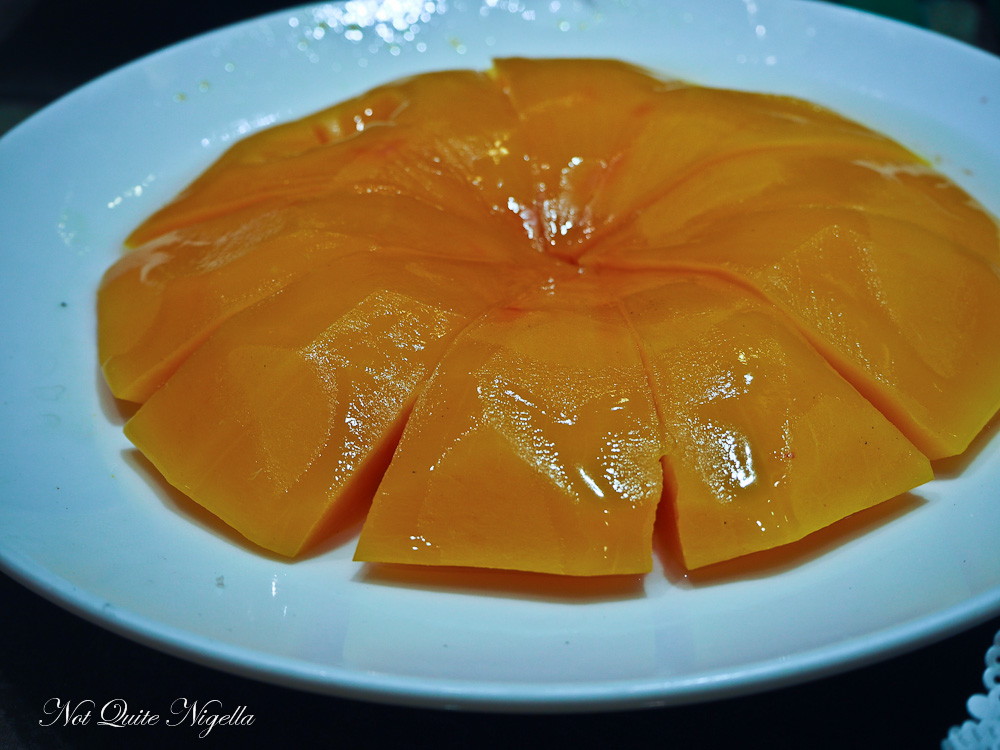 The pumpkin is steamed and almost resembles mango slices - it is full of sweetness.

For good measure as it is the mid Autumn festival tomorrow, we have duck soup, another popular Guilin item. The broth is sweet and the duck pieces on the bone are tender and there are also gingko nuts in the broth to give it texture and flavour. 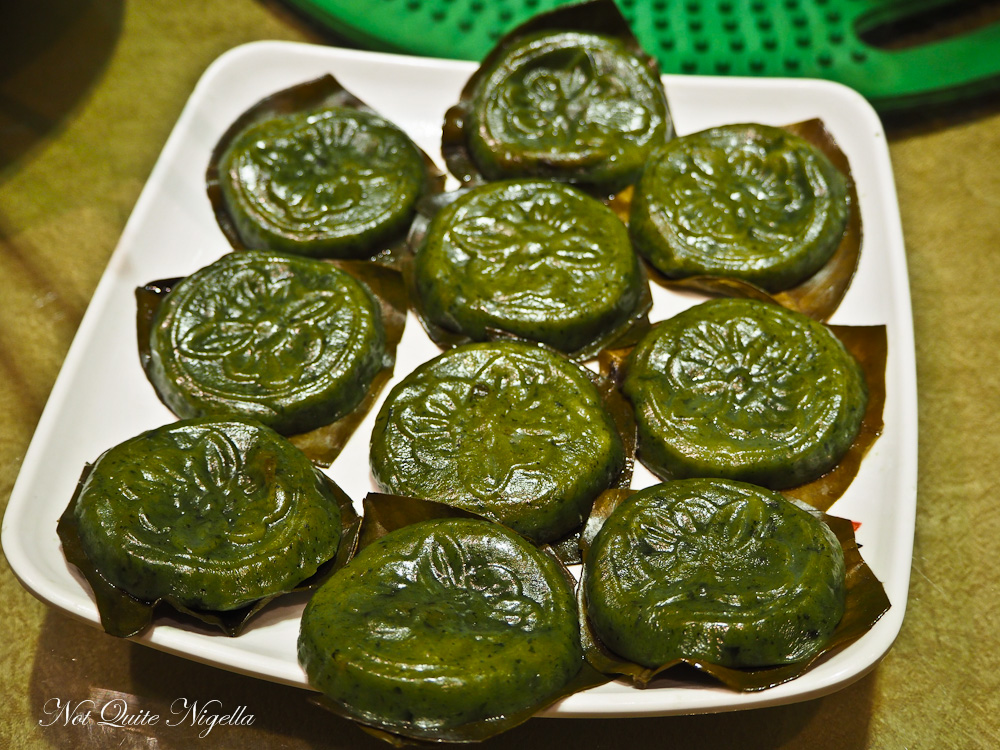 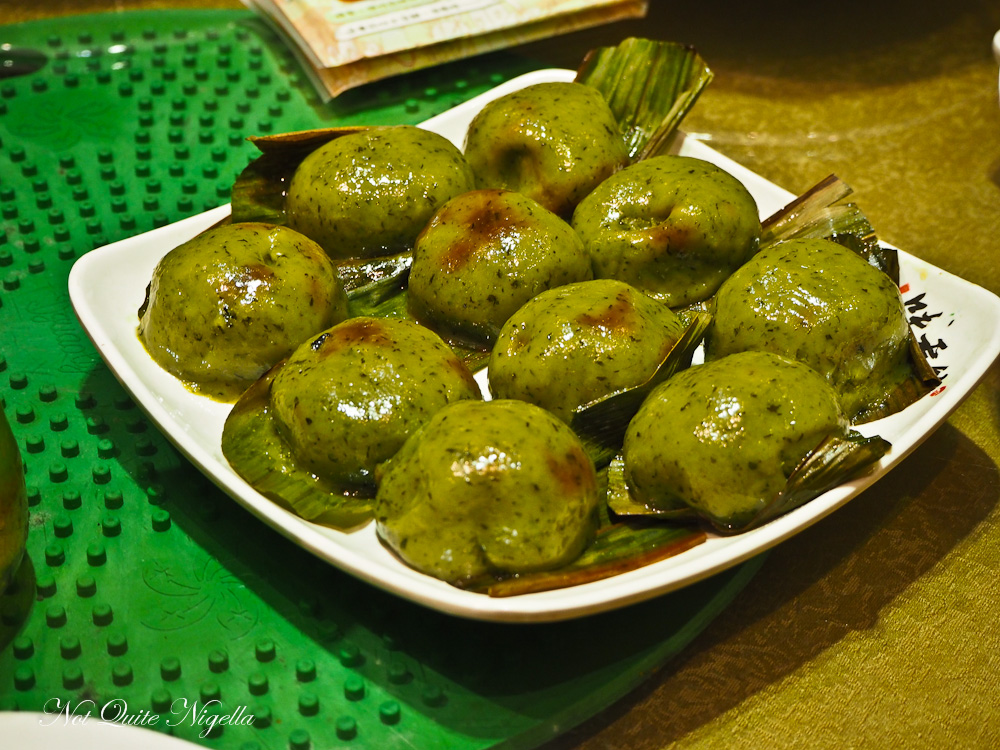 Also set down on the table at the same time as the mains are the sticky rice dumplings for dessert. Both are filled with a sweet black sesame filling and the round ones are served on a square of pomelo leaf. 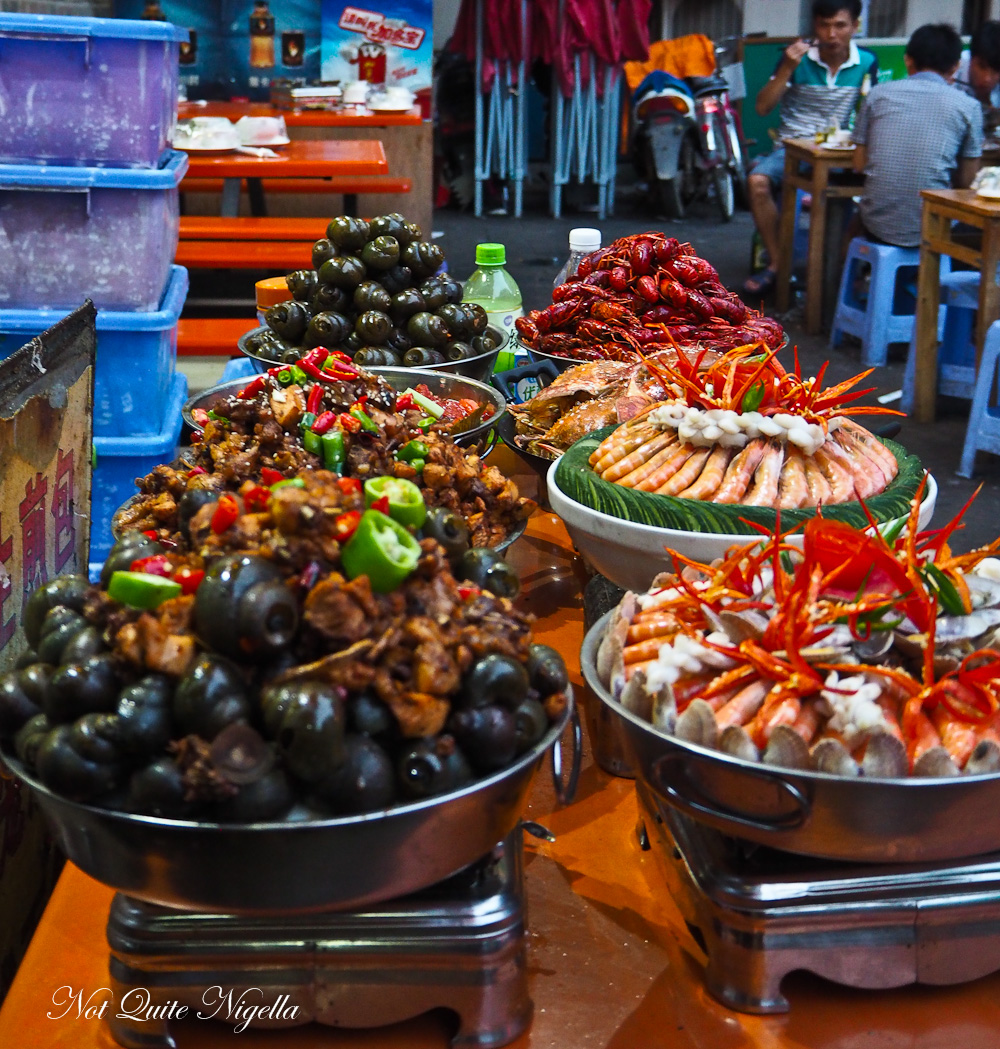 Outside, Guilin's main shopping street has plenty of souvenir stores as well as fashion boutiques and street stalls. This is where the young people of Guilin gather to eat and there are stalls with fresh juices, fruit and dumplings although undoubtedly the most popular items are the wooden skewers. 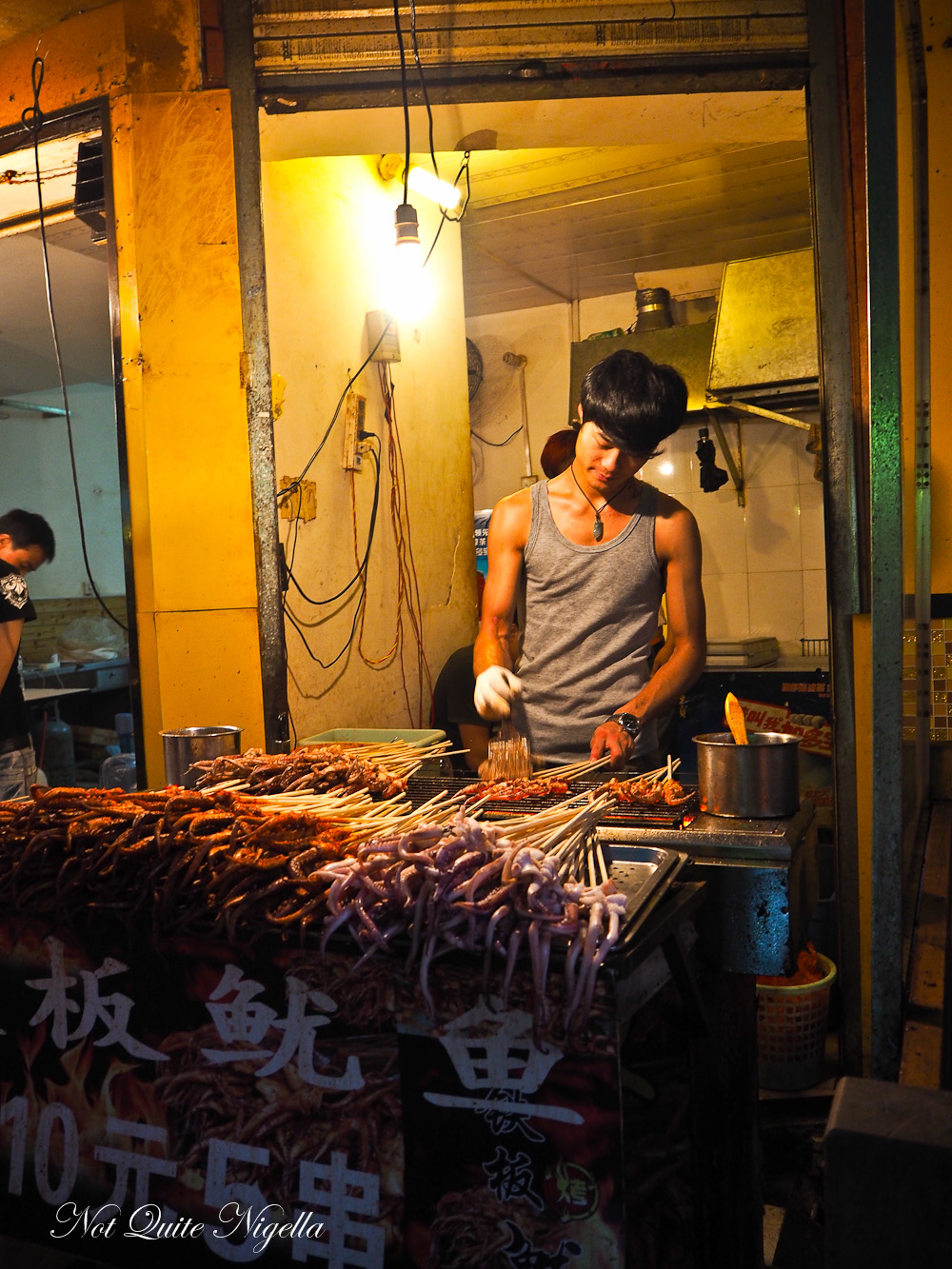 These are enormous in length and thicker than regular skewers and can hold anything from squid tentacles to whole fish. People nibble on their hot, pronged items while walking and shopping. 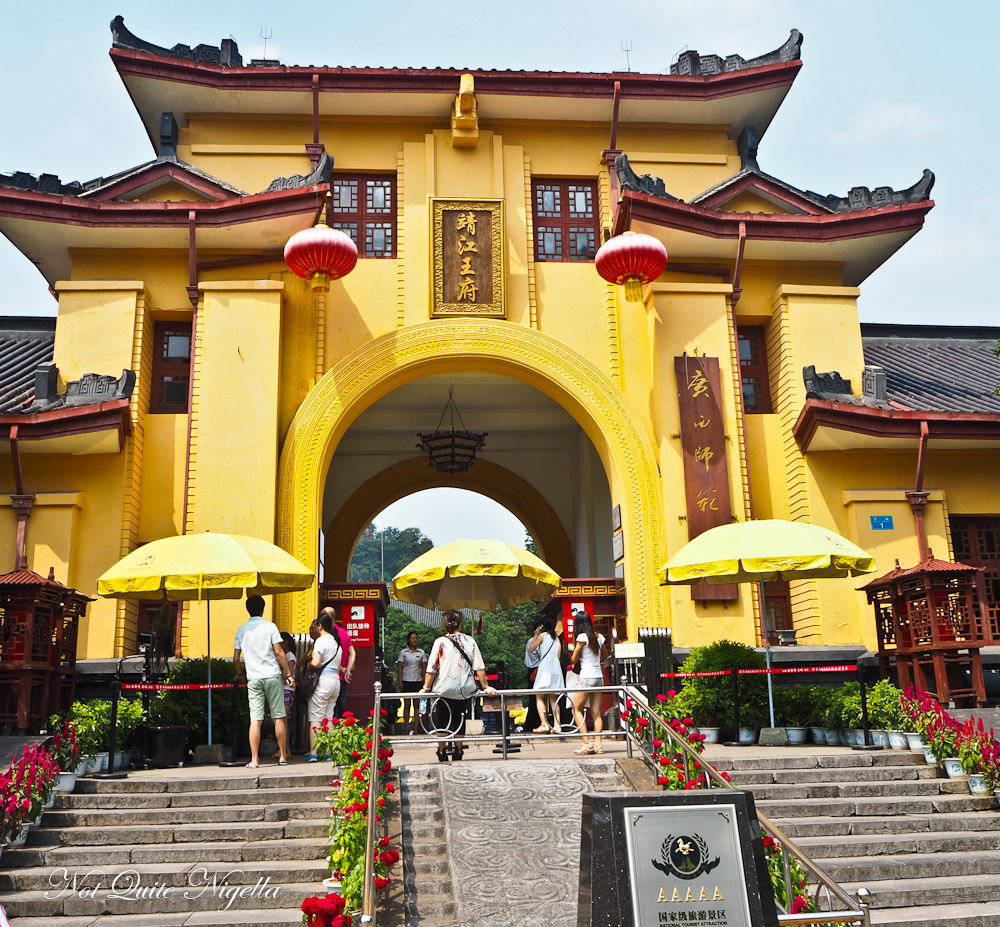 As part of the tour, we stop by a popular tourist attraction. JianJiang Prince Palace constructed in 1372 during the Ming Dynasty. It is said to sit on the centre axis of Guilin and those brave enough can climb one of the mountains there called Solitary Beauty Peak. Fourteen princes made this palace their home and now it serves as a university and a tourist attraction. 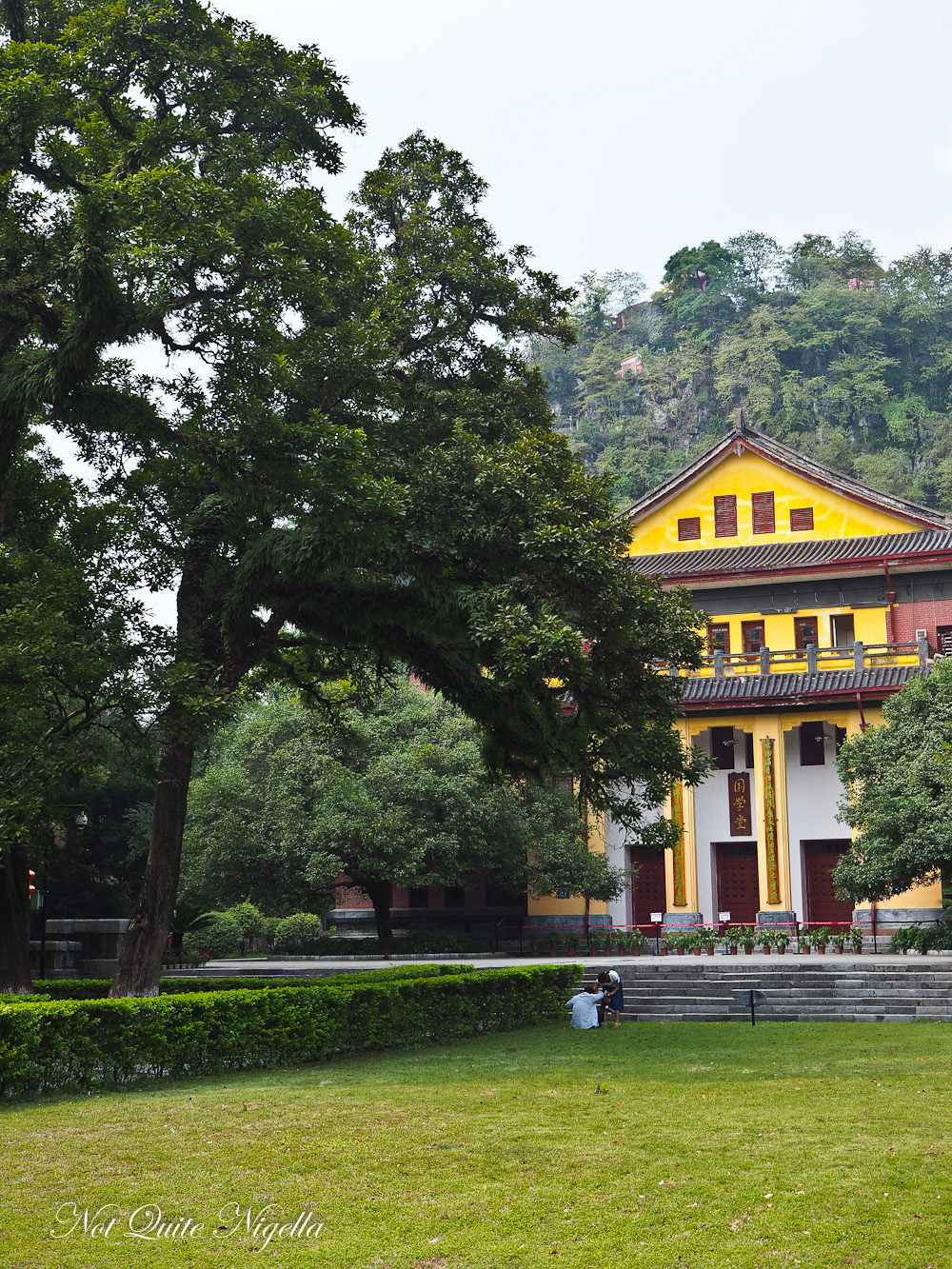 Romantics might enjoy the notion of the couple tree-a lotus tree and banyan tree intertwined. There is said to be a dragon's head at one side and a tail at another and it is good luck to rub them. You can also watch a mock recreation of the exams that people undertook to nab a prestigious government job - cheating during the test earned people a week in a cage. We get the chance to practice our calligraphy too. 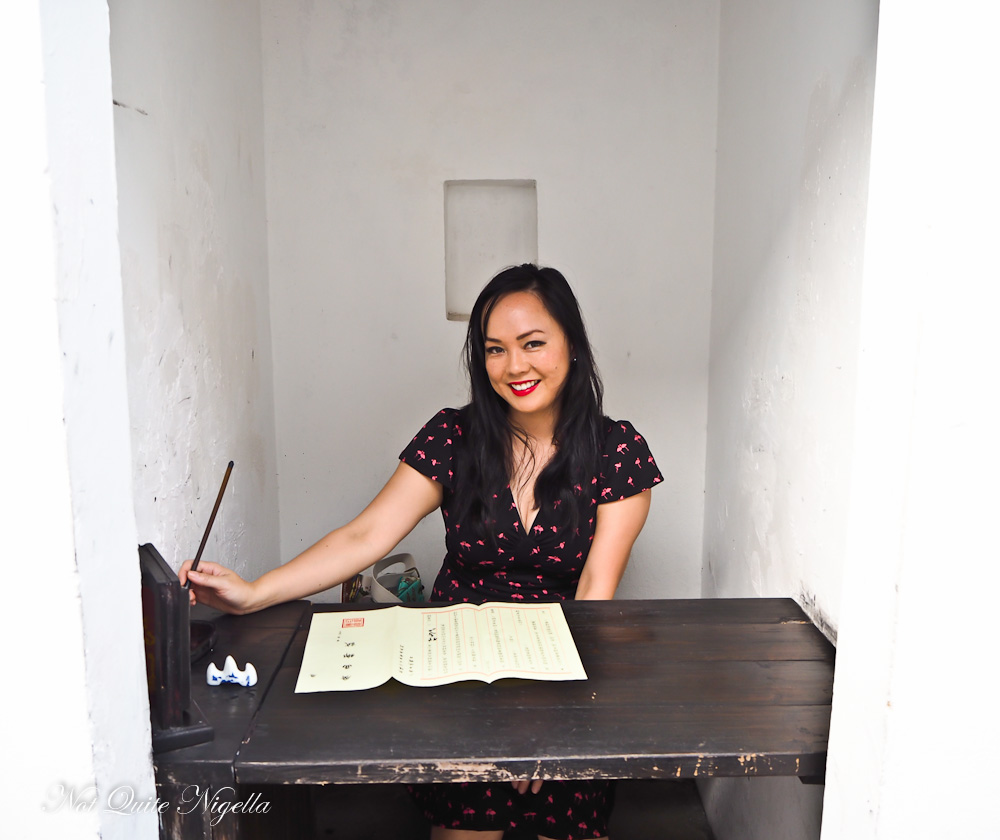 At night the cool river breeze is deliciously welcome as we board the two rivers, four lakes cruise. There are plenty of photogenic sights starting with the temples and the cruise also combines, somewhat surreally, a range of performances that strike up as you meander across the four lakes and two rivers. 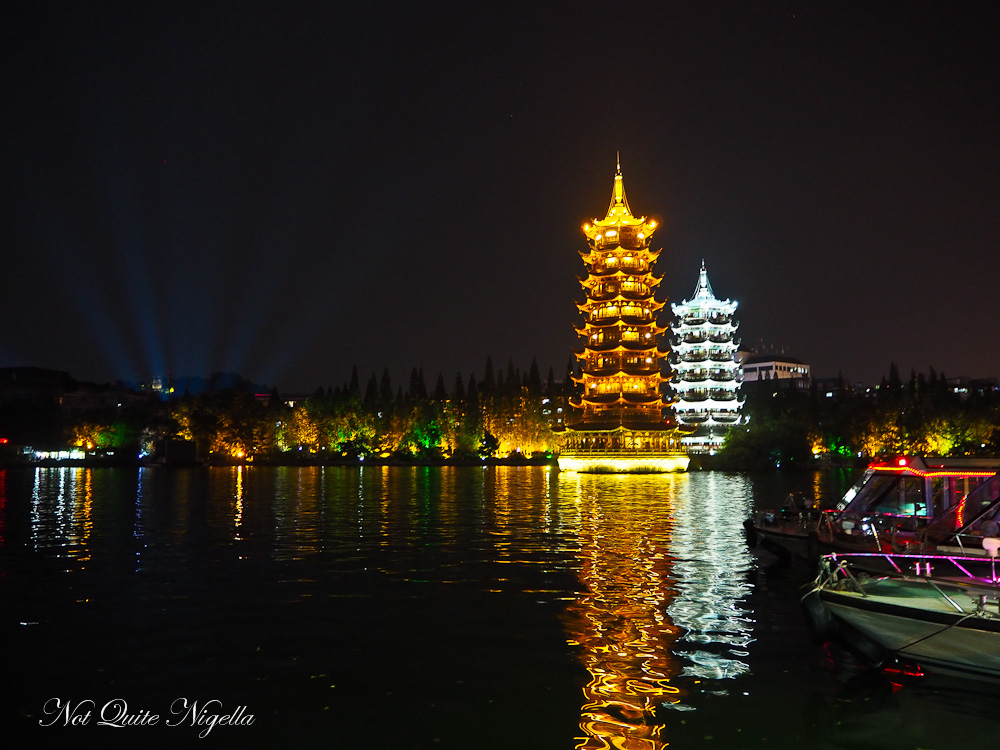 The performances range from a band of girls with instruments to a woman's bathing ritual to completely choreographed numbers with tens of people involved. As your boat pulls up in front, they spring into action ready for a live performance. 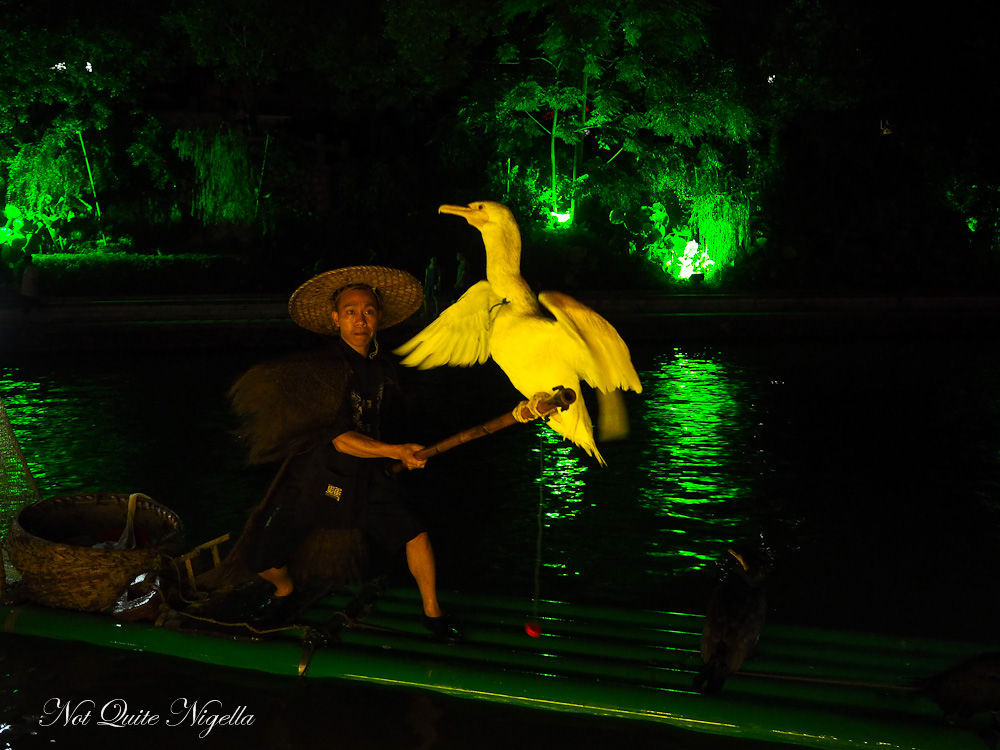 Mid way through is the cormorant show where trainers on bamboo rafts shout "Bah" as a command for their cormorant to dive under water and catch a fish. The cormorant has a ring around its neck and can't swallow the fish. Instead the fisherman grabs it by the neck and takes the fish out. It is an echo of how fishing used to occur and our guide Maggie says pragmatically "Life is cruel."

So tell me Dear Reader, would you try horse meat noodles? Have you travelled to much of China or regional China? If so, what have your experiences been like? 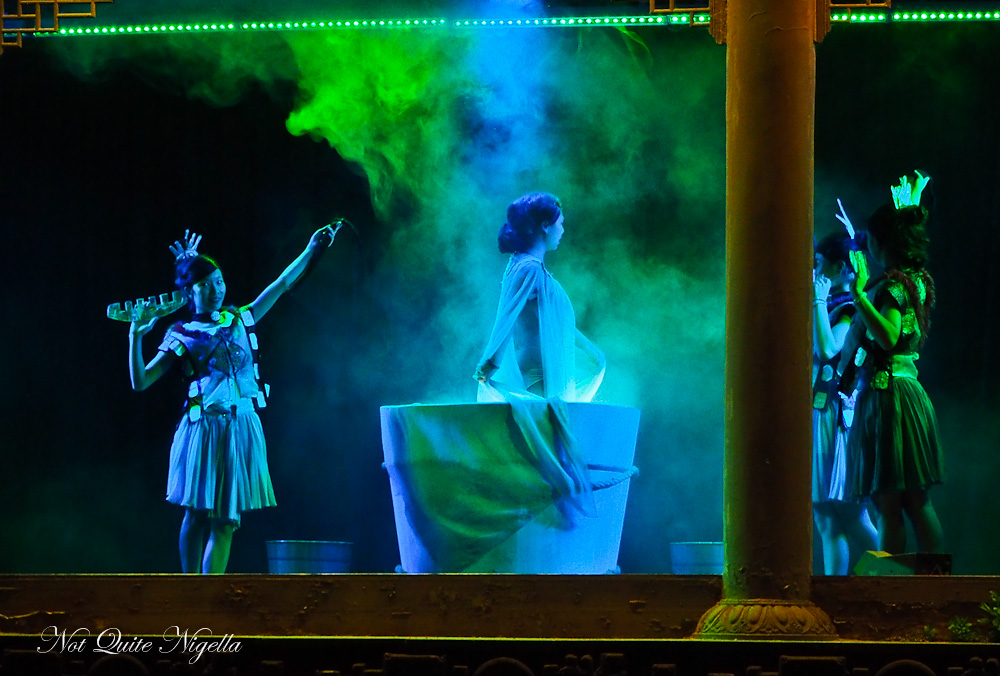