Get Me To The Greek Gyro! 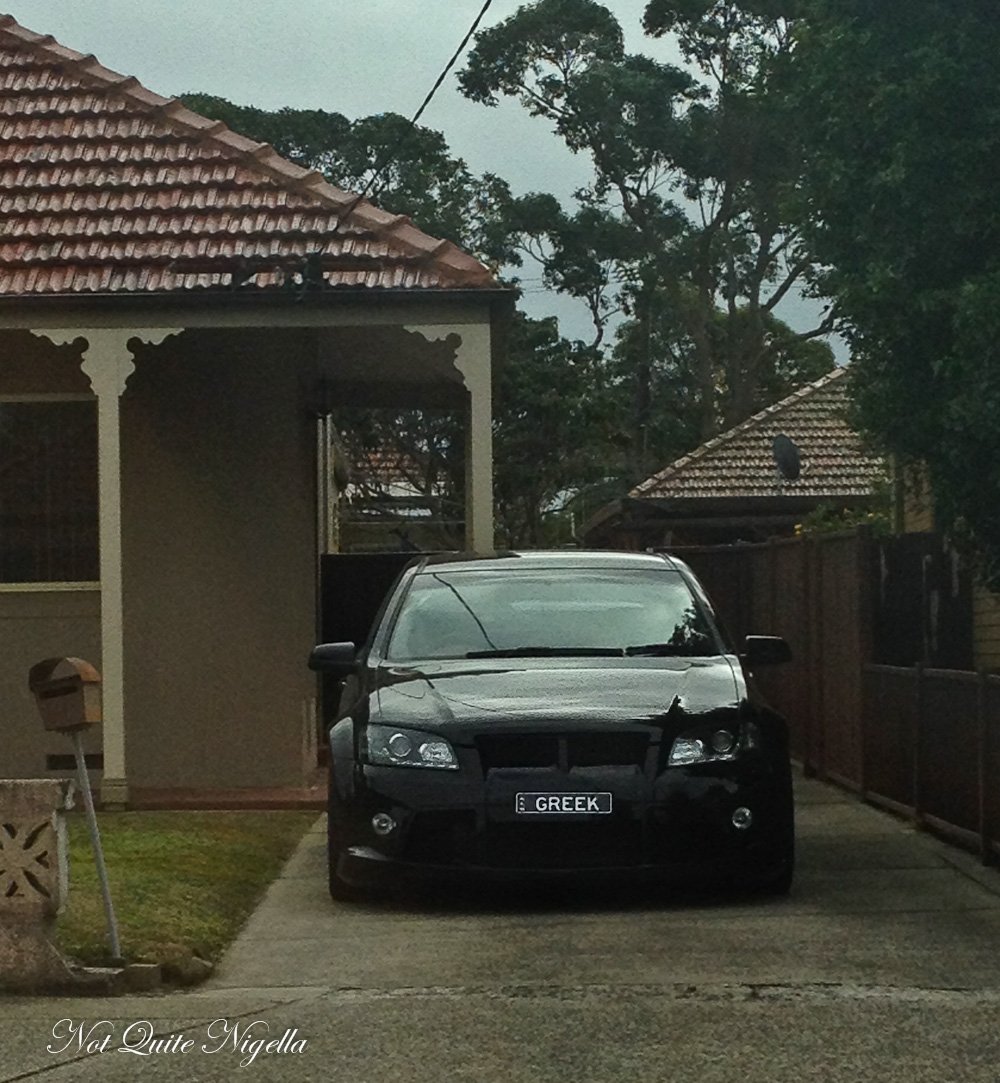 Definition of Gyro: 2. a sandwich especially of lamb and beef, tomato, onion, and yogurt sauce on pita bread. From Greek; from the rotation of the meat on a spit. First Known Use: 1971 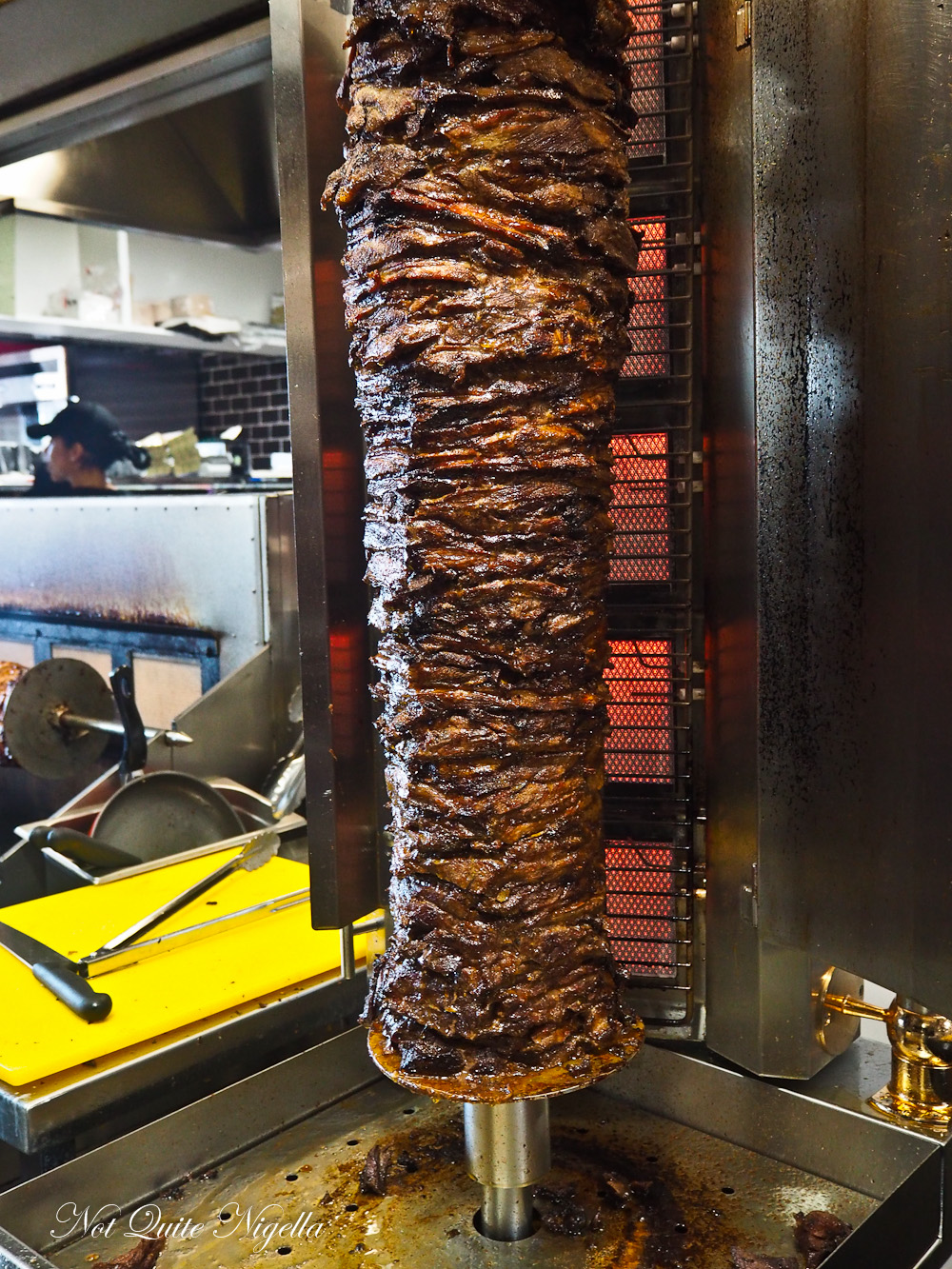 One of the benefits of having Nick, my Greek brother is that I can cajole him to introducing me to Greek food. For the last few months he has been telling me about a mini wave of new gyro (pronounced yee-ros) places on his drive from work to home. Apparently the queues at each were astounding day in and day out never letting up even late at night. So just yesterday I asked Nick to take Mr NQN and I to all three. And that Dear Reader, is how we ate eight gyros in one day at three of Sydney's newest gyro stores (and why I'm working out furiously today! ;)). 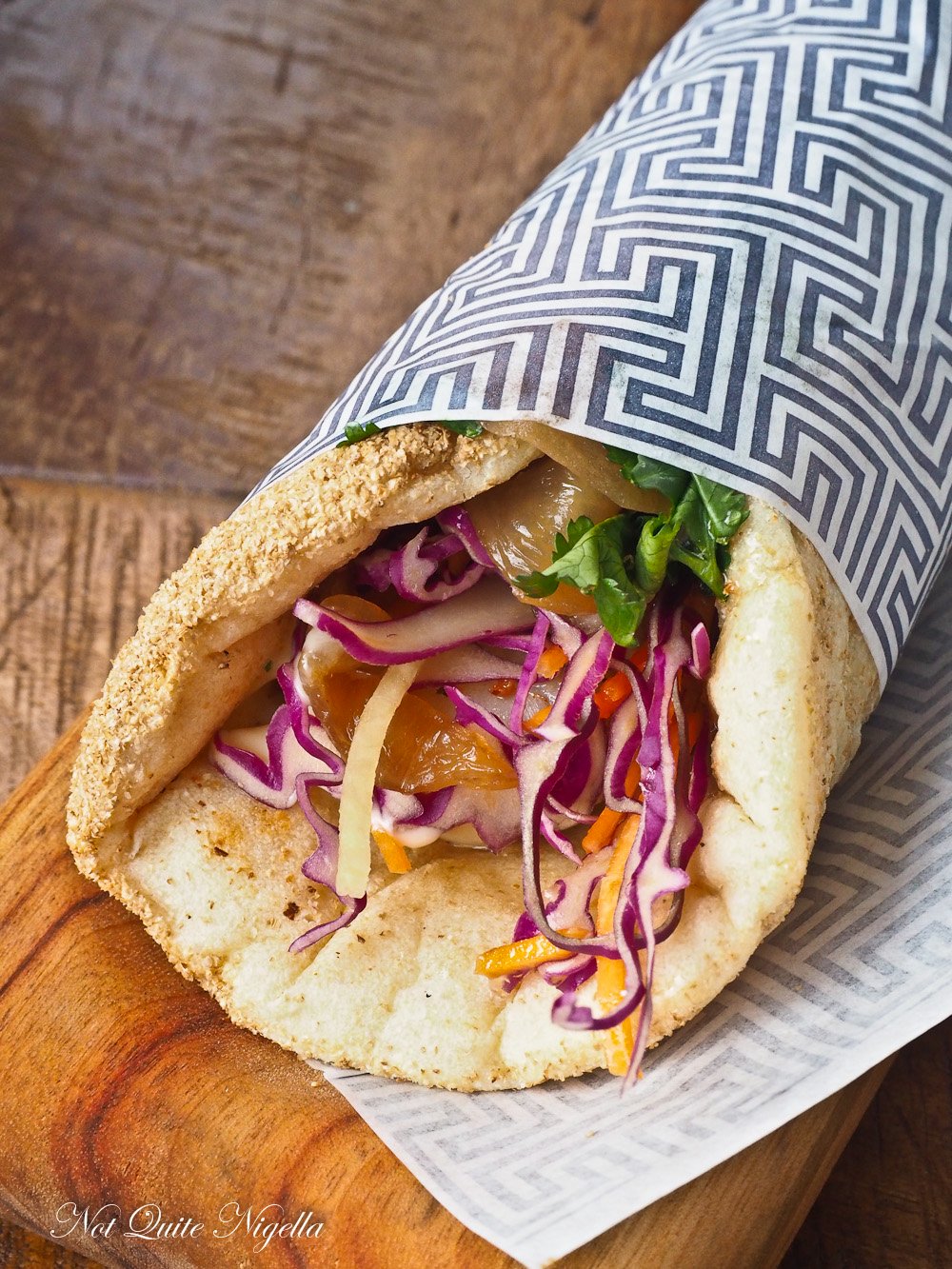 Many of us know of Gyro via its cousin the Doner Kebabs. These are the Turkish version stuffed with shredded meat sliced from a rotating spit and filled with tabouli, hummus and salad. Greek Gyros are different - the pita is softer and fluffier and served warm from a light toasting on the hot plate. These are typically filled with sliced meat, pork is traditional along with tzatziki, tomato and onion and served rolled up in paper. It's a simple dish but if the queues are any indication, hugely popular too. 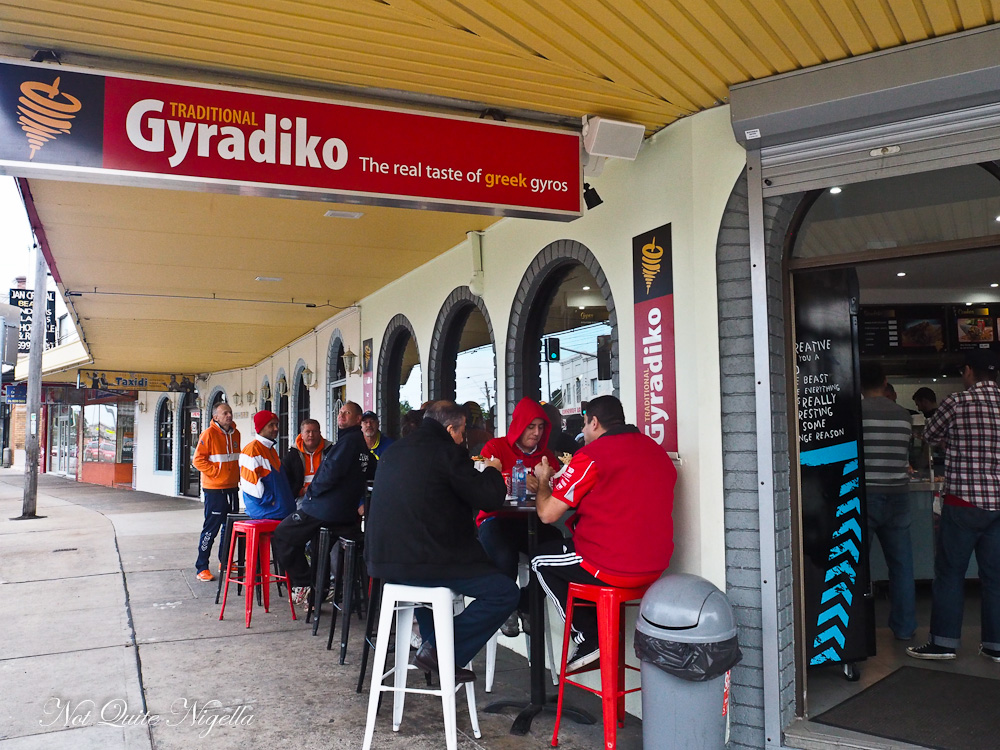 It is 12:25pm on a Sunday and Mr NQN and I are on our way to Bexley in Sydney's South. We stop at a light and see a car parked in the driveway with a "Greek" number place. There's no mistaking the strong presence of the Greek community here. 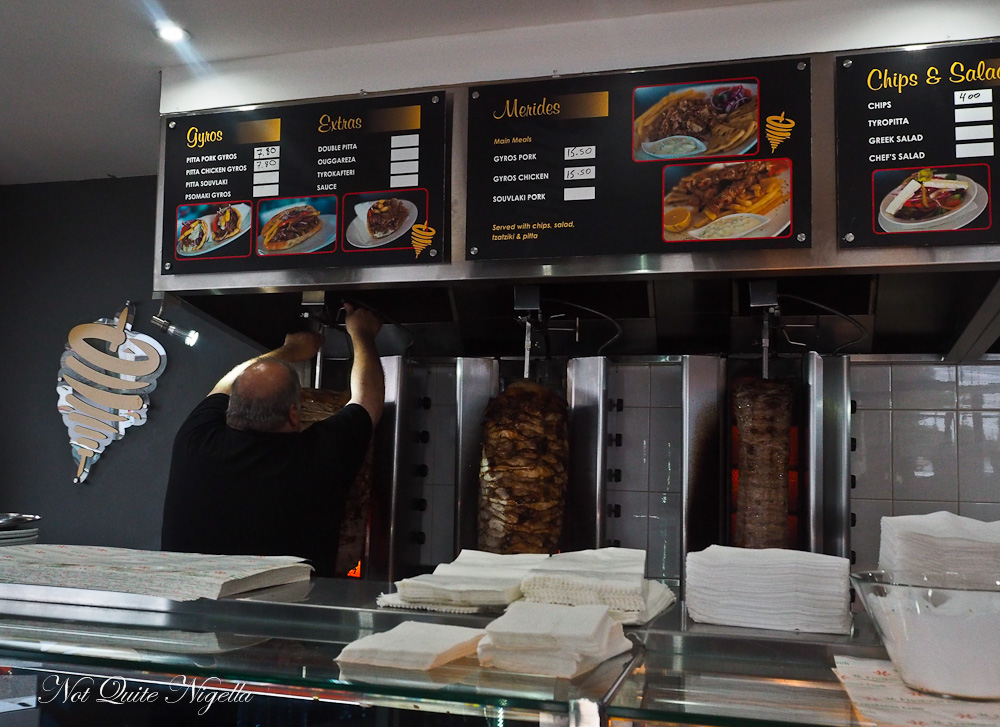 At Gyradiko on Forest Road, there's a large contingent of workers sitting outside lunching on their gyros and a steady stream of customers inside. Gyradiko meaning gyro shop, has been open since April 2014. The menu is simple and there are two types of gyros: chicken and pork. Some come with an extra serve of fries on the side and I watch as each patron makes their way down the counter sprinkling chilli powder, pepper and oregano onto their sauce coated fries. At this proudly traditional gyros store, they also use an Athenian touch with potato fries wedged in each gyros cone. 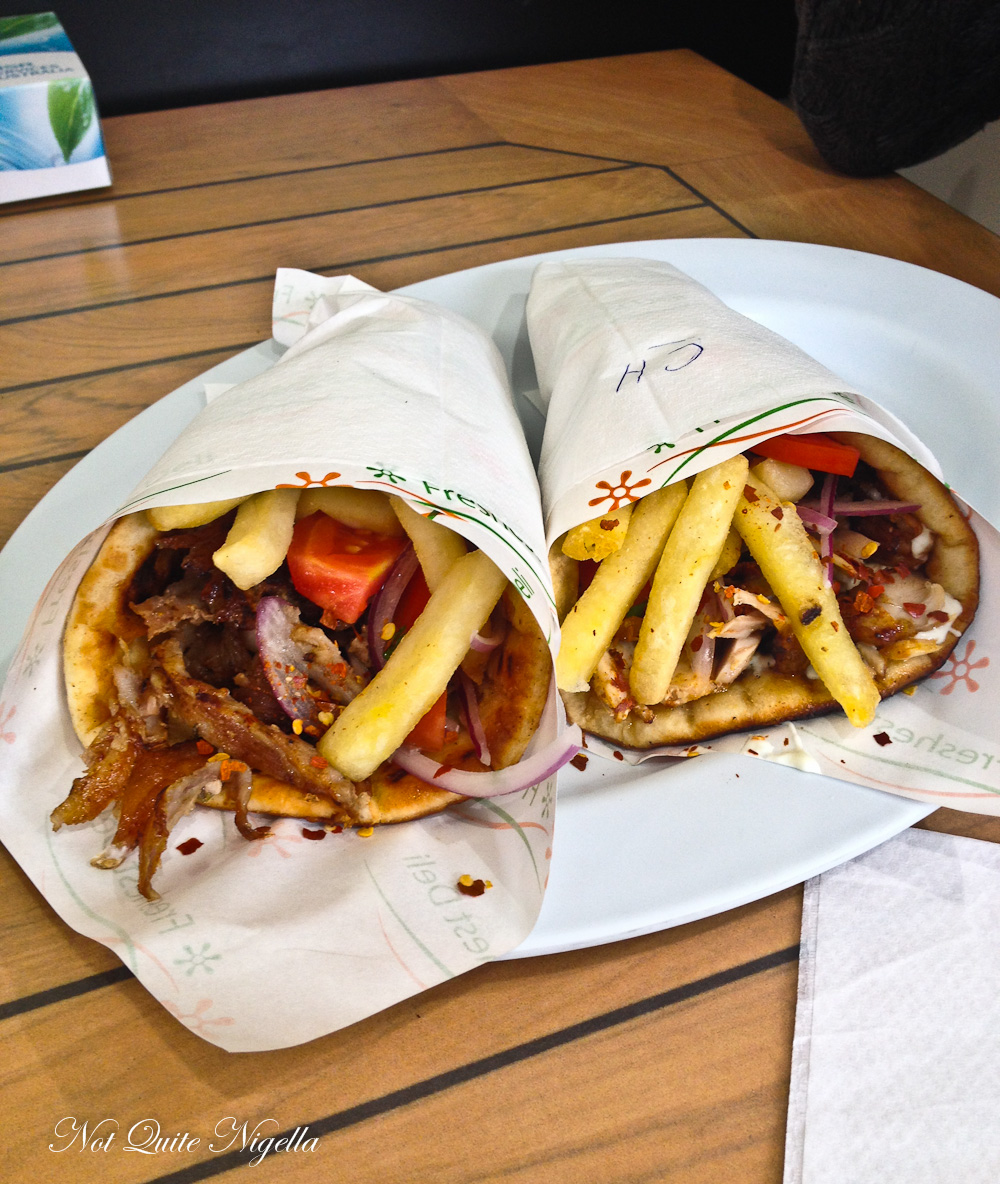 We take a bite of each gyro. There is a good amount of sauce, onion, tomato, tzatziki in each one. The pork comes in larger slices whereas the chicken comes more shredded which gives each a different texture. The soft pita is warm and I slightly prefer the chicken one as there is more sauce but both meats are tender and flavoursome. I have to stop Mr NQN from devouring them as I know that we have more gyro to go! 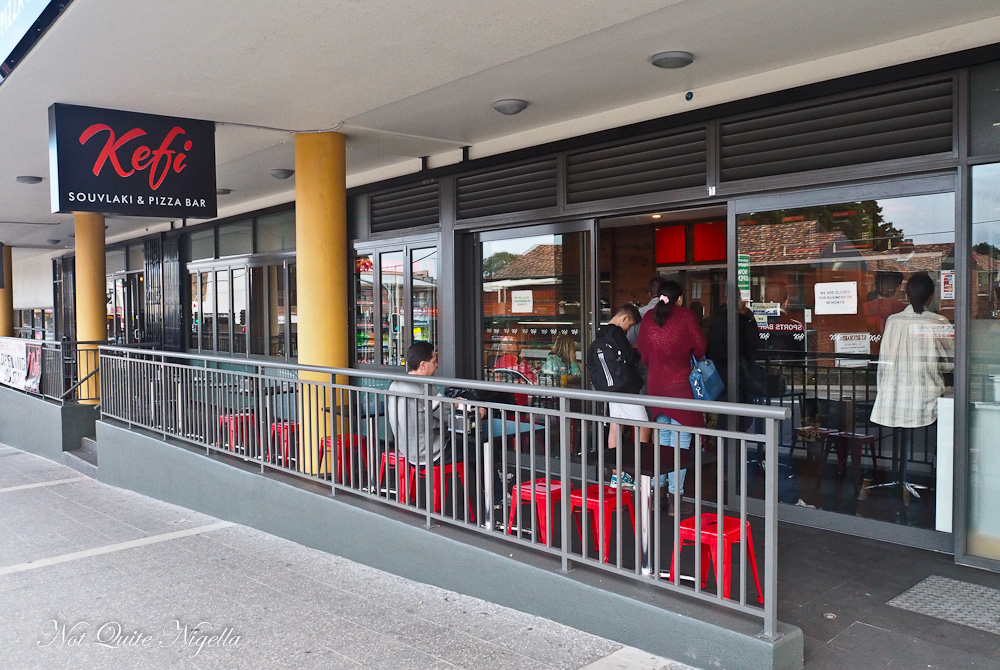 From traditional to the modern gyros, we make our way to Kingsgrove to three week old Kefi (meaning "in the mood" in Greek). Here chef and friend David Tsirekas formerly of Perama and Xanthi has been giving the humble gyro a chef's touch. His touch is seen immediately on the menu offerings. The two specials are soft shell crab and pork belly baklava gyro, the latter one of his signature dishes at Perama but brought to life inside a pita. 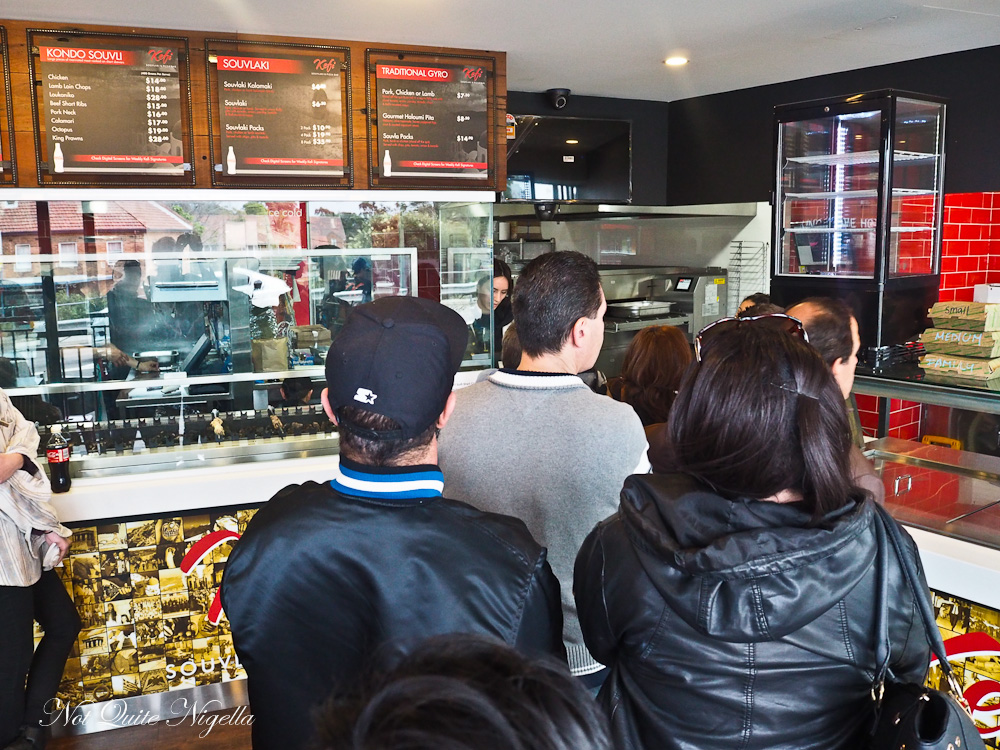 There is a carpark for Kefi customers and this takes you into the dining room. The other entrance where one places an order is on busy Kingsgrove Road where there is already a queue of customers waiting and ordering. While waiting they watch the open kitchen with staff cooking souvlaki over coals or wrapping and putting together the gyros. We go for a traditional pork and lamb as well as the two specials. There is some slight confusion with processes when customers go to the dining room to wait - presumably this is just teething problems. 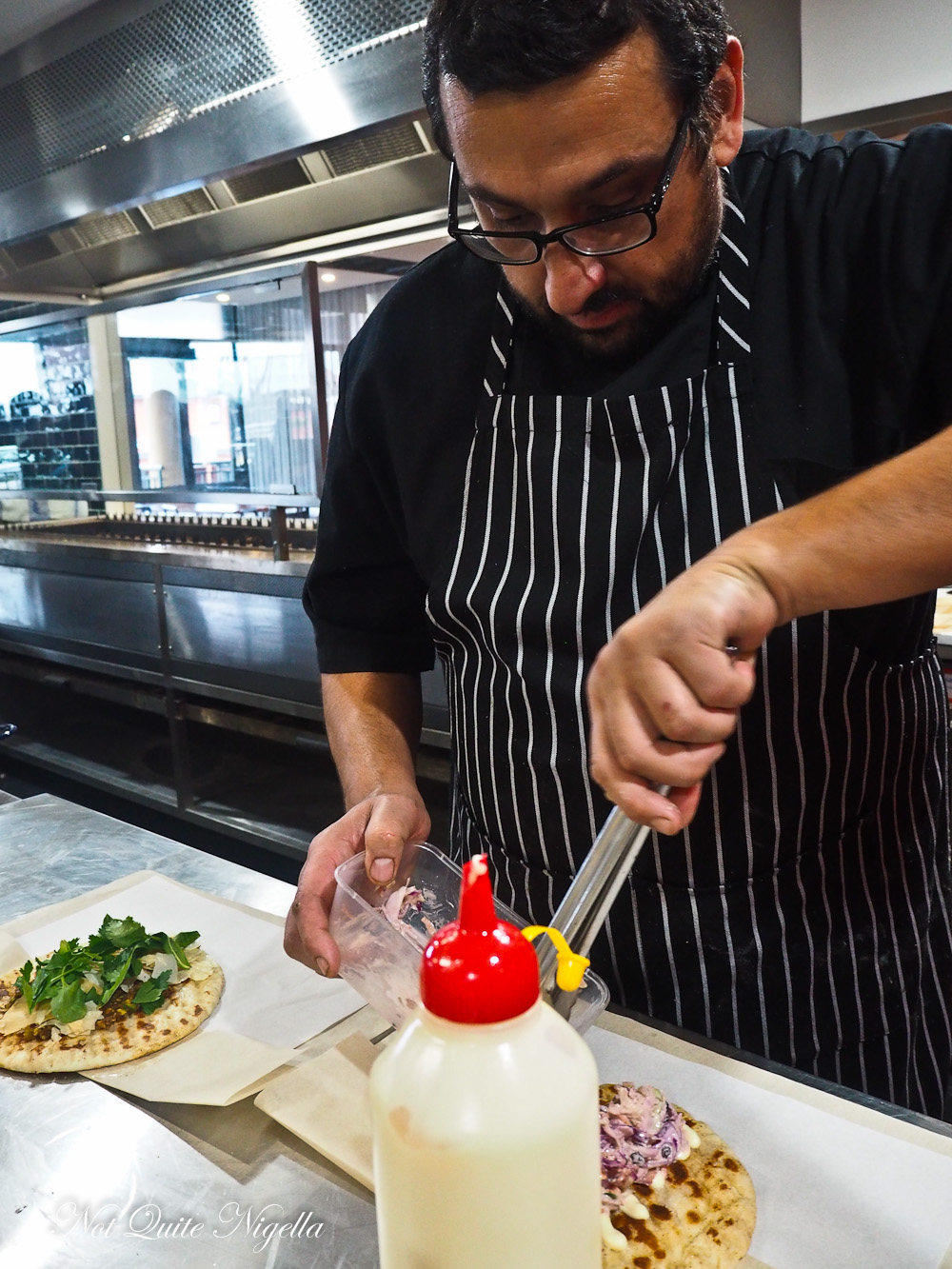 The taverna side of the business is set to open up within two weeks and will feature classic Greek dishes as well as delicacies like Kokoretsi made with lamb caul fat, intestines, kidneys, heart, sweetbread, liver and lung. 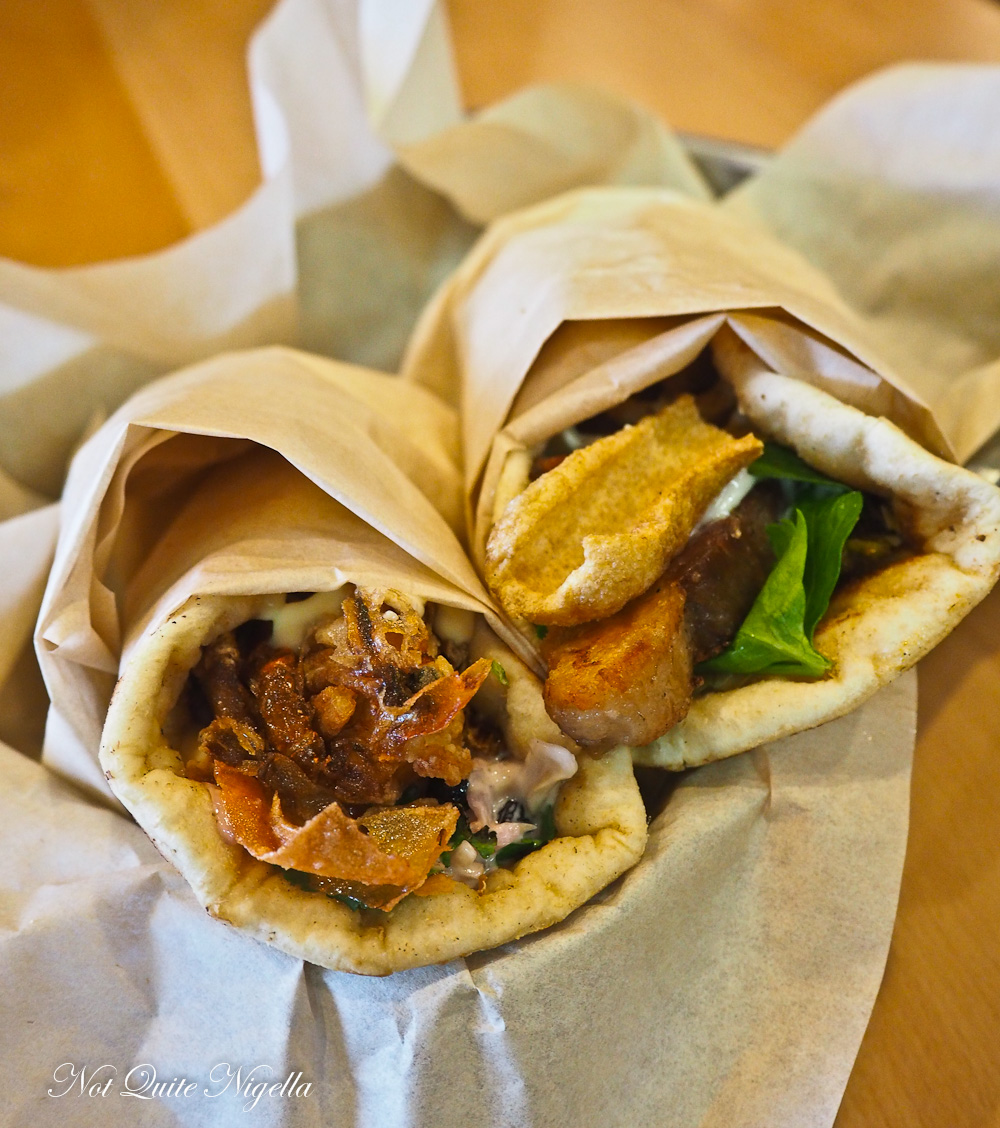 David is busy tending to the two specialty gyros and we watch him heat a pita bread on the hot plate and then top it with a date and pistachio paste, filo pastry shreds, pork belly, crunchy crackling, parsley, coriander, mint and an apple mastic mayonnaise. We take a bite of ours and it's sweet, crunchy and juicy all at the same time. It reminds us instantly of his pork belly baklava and the delicious interplay between the sweet and savoury.

David also makes the soft shell crab gyro where freshly fried soft shell crab is paired with his signature Greekslaw made up of purple cabbage, green apple, carrot and herbs as well as coriander and mustard mayonnaise. It's fresh and crunchy at the same time and Nick is in raptures over this. 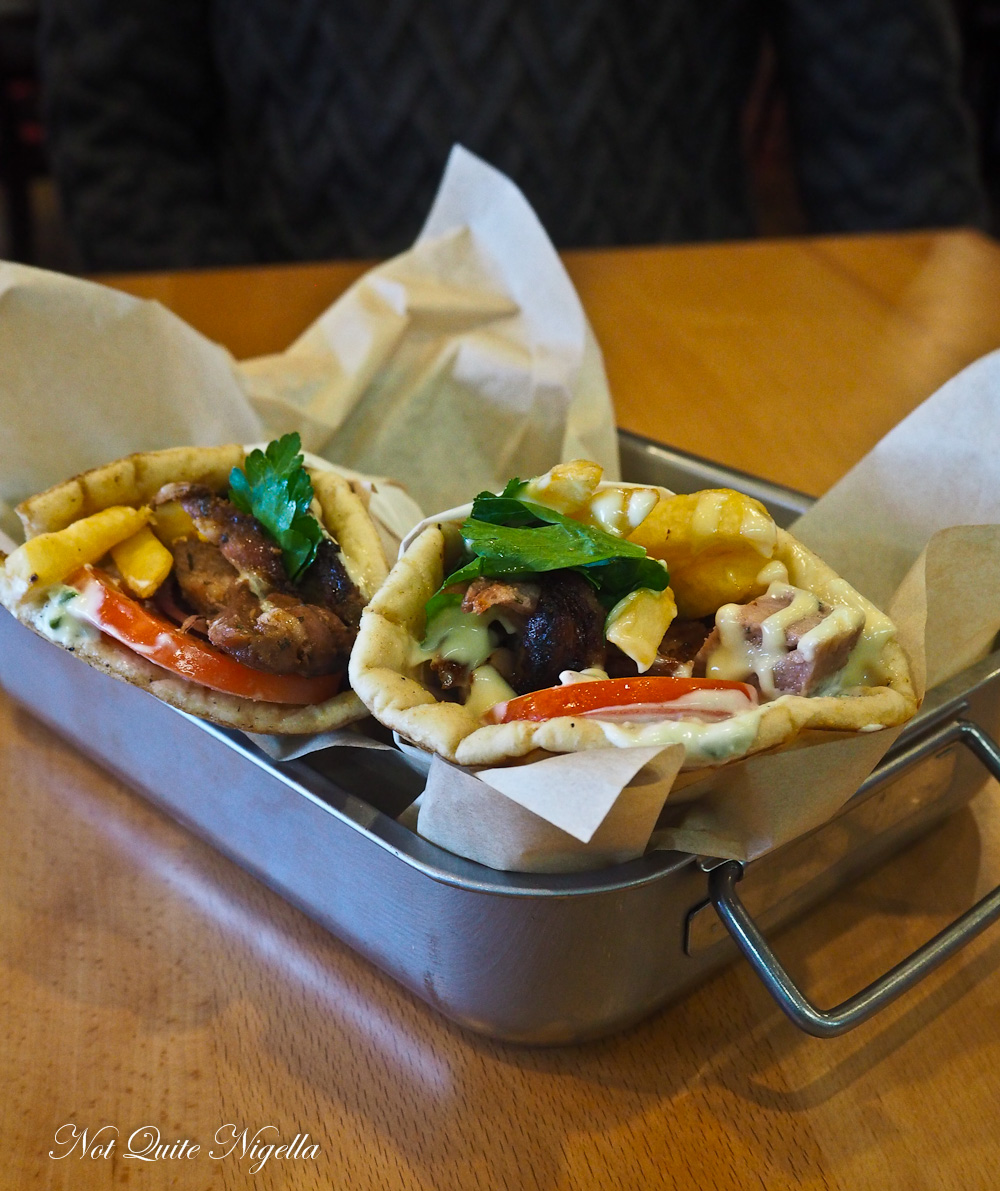 Next to come out are the traditional gyros with pork and lamb. I find myself smitten with the pork gyro, all smoky, delectable goodness with a generous serve of both tzatziki and mustard mayonnaise sauces and salad. There are no fries in either of the special gyros but they appear in the traditional gyros along with tomato, onion and parsley. The lamb, always a favourite at a Greek barbecue is expertly cooked and moist but I find myself going back to the pork gyro with its succulent, burnished meat. 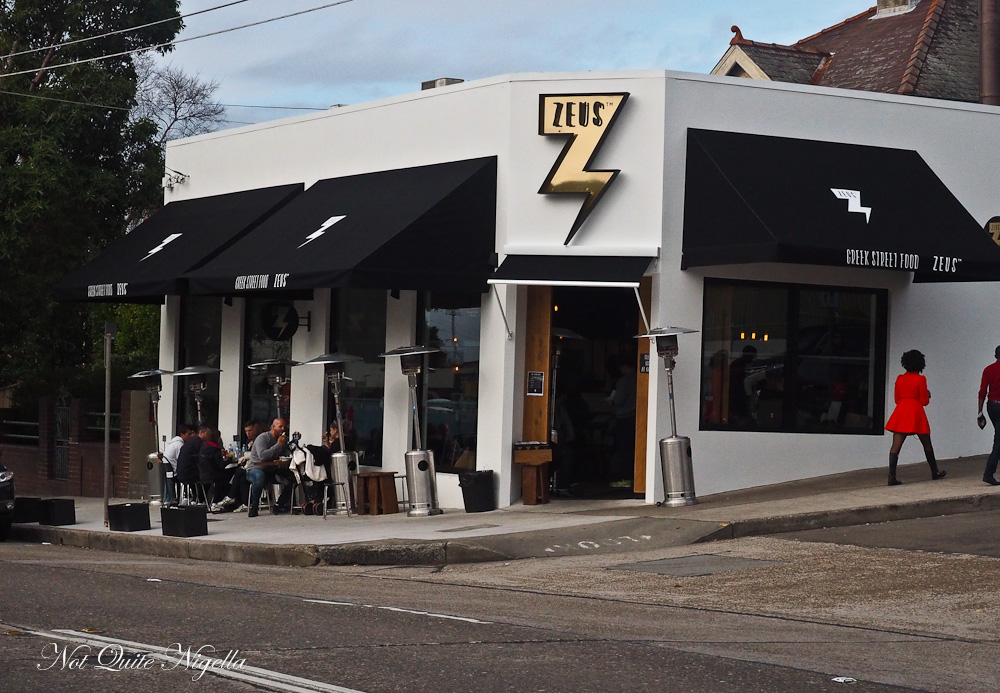 First of all there's the enormous gold lightning bolt. There's no ignoring Zeus on Lyons Road in Drummoyne with its striking gold, black and white exterior. Zeus resembles a fashion boutique in L.A. rather than a gyros shop. And it seems to have caught many an eye if the queues are any indication. 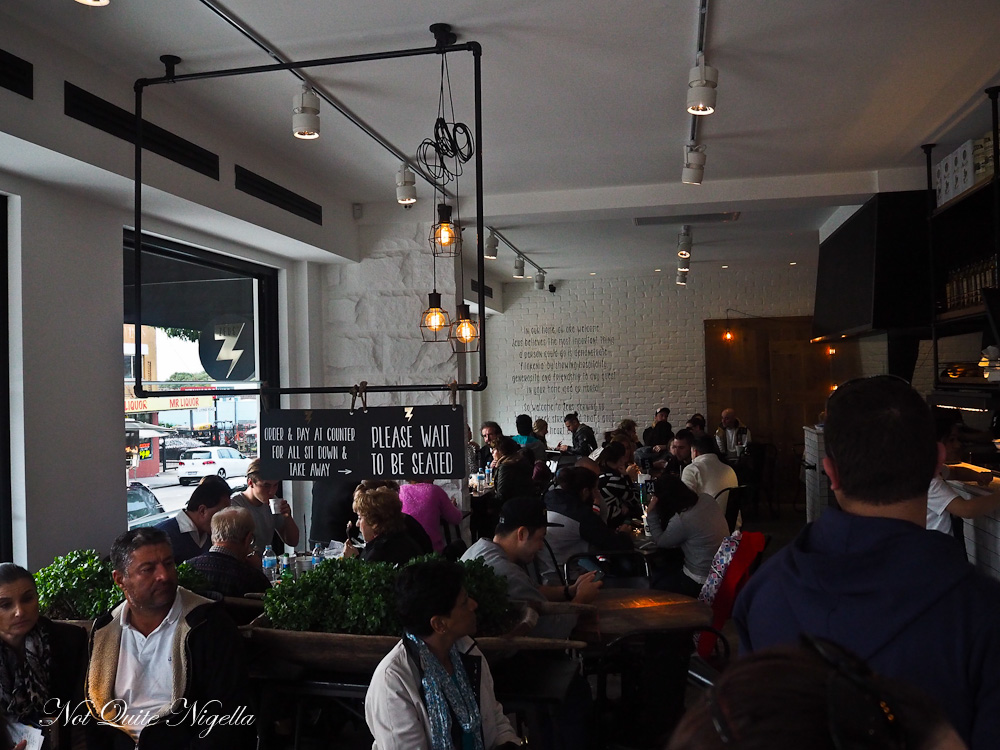 Although we have arrived at 3pm there is a small queue for tables so we pull up some stools outside and order takeaway bringing a bucket of cutlery and a number to our makeshift table. There are six gyro fillings available as well as a "Nude Zeus" menu without the pita bread. Prices for the gyros are higher than the other two places ranging from $9.50-$11.50. 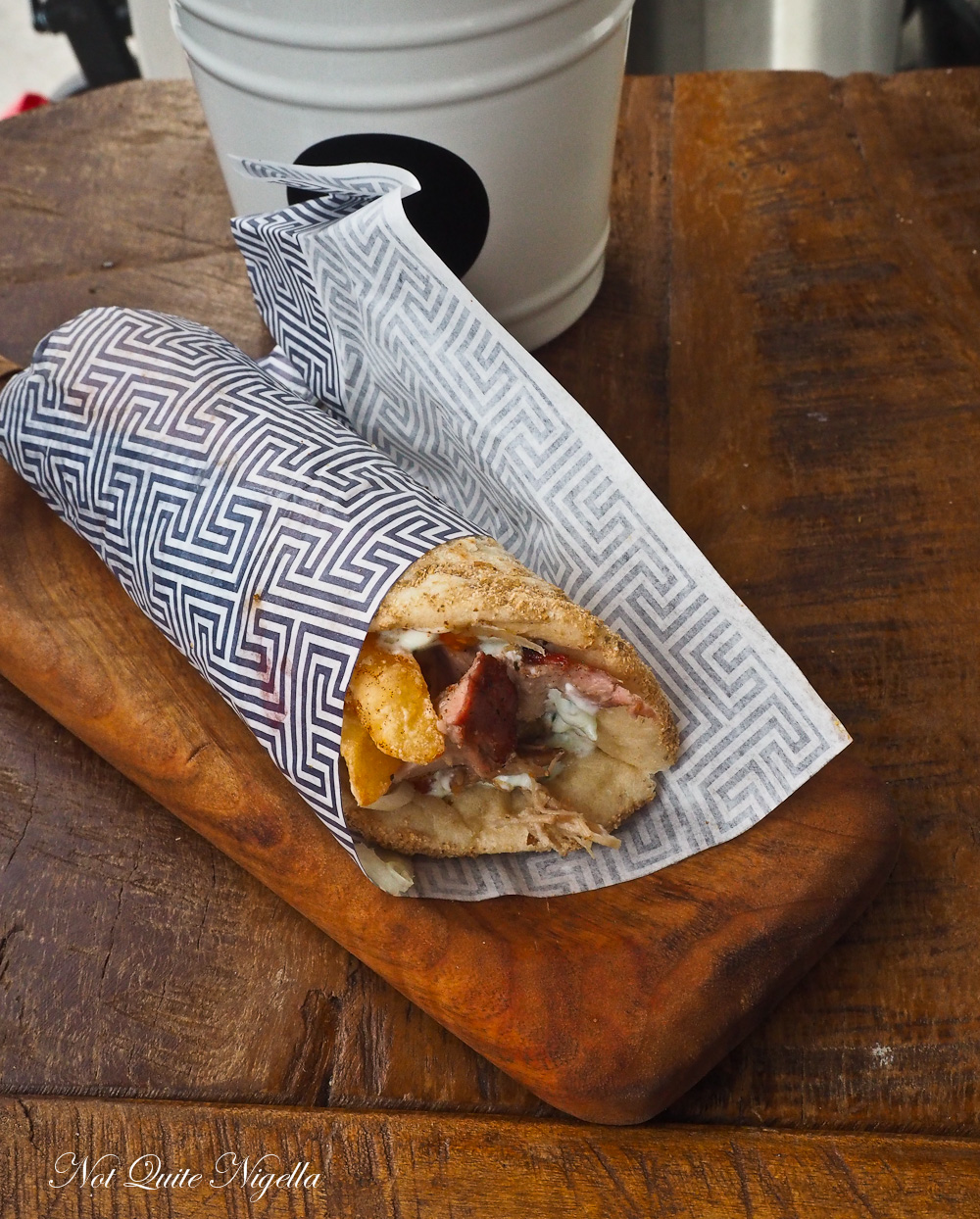 The pork gyro comes out first on a stamped wooden paddle. Things here are merchandised well and presented attractively. The house made pita here is different with a soft spongey finish and a slight texture from a light polenta dusting. There is a generous amount of pork inside and this is a thinner, more cylindrical gyro but it's a little dry inside. A little more Aegean slaw and preserved lemon mayonnaise would have been great. 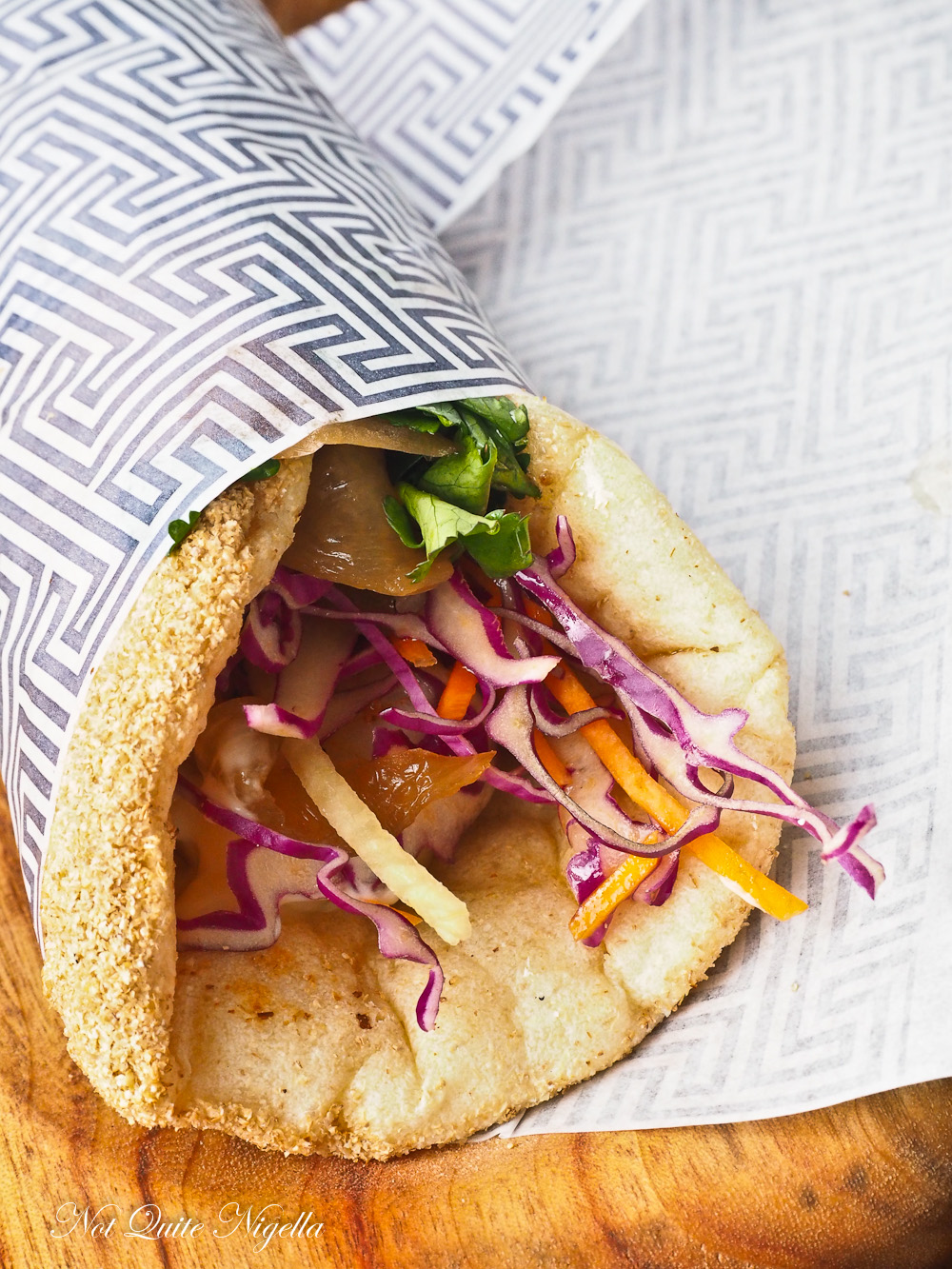 Our prawn gyro arrives a few minutes after and it is filled with succulent fried prawns with Aegean slaw, preserved lemon mayo, caramelized onion, honey and coriander. The honey is strong in this reminding us of honey prawns and with the coriander it reminds us of a banh mi. This is my favourite of the two.

We watch as another table receives their order of loukoumades, five plates in total the honey drenched donuts perfuming the air with their sweet scent? I look hopefully at Mr NQN and Nick but alas it is not to be. Looks like it might have to wait for another day. One in which we don't eat eight gyros...

So tell me Dear Reader, do you have a favourite gyro filling? And what do you think of the idea of fries in the gyro? Do you ever put fries in your burgers or sandwiches? How many gyros do you think you could eat and would you visit all three in one day?

All meals were independently paid for.