Knafeh Bakery, Strathfield (for the moment!) 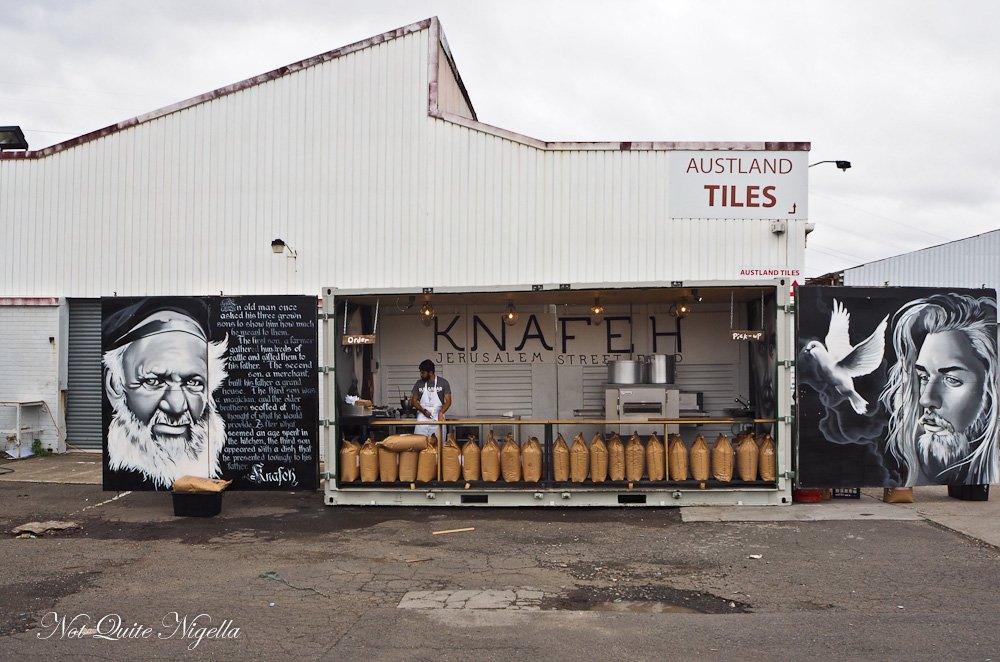 Like a proud son, 31 year old Ameer El-issa introduces his mother Nabila. She moved to Australia from Amman, Jordan in 1972. Importantly, she came with her own recipe for knafeh. 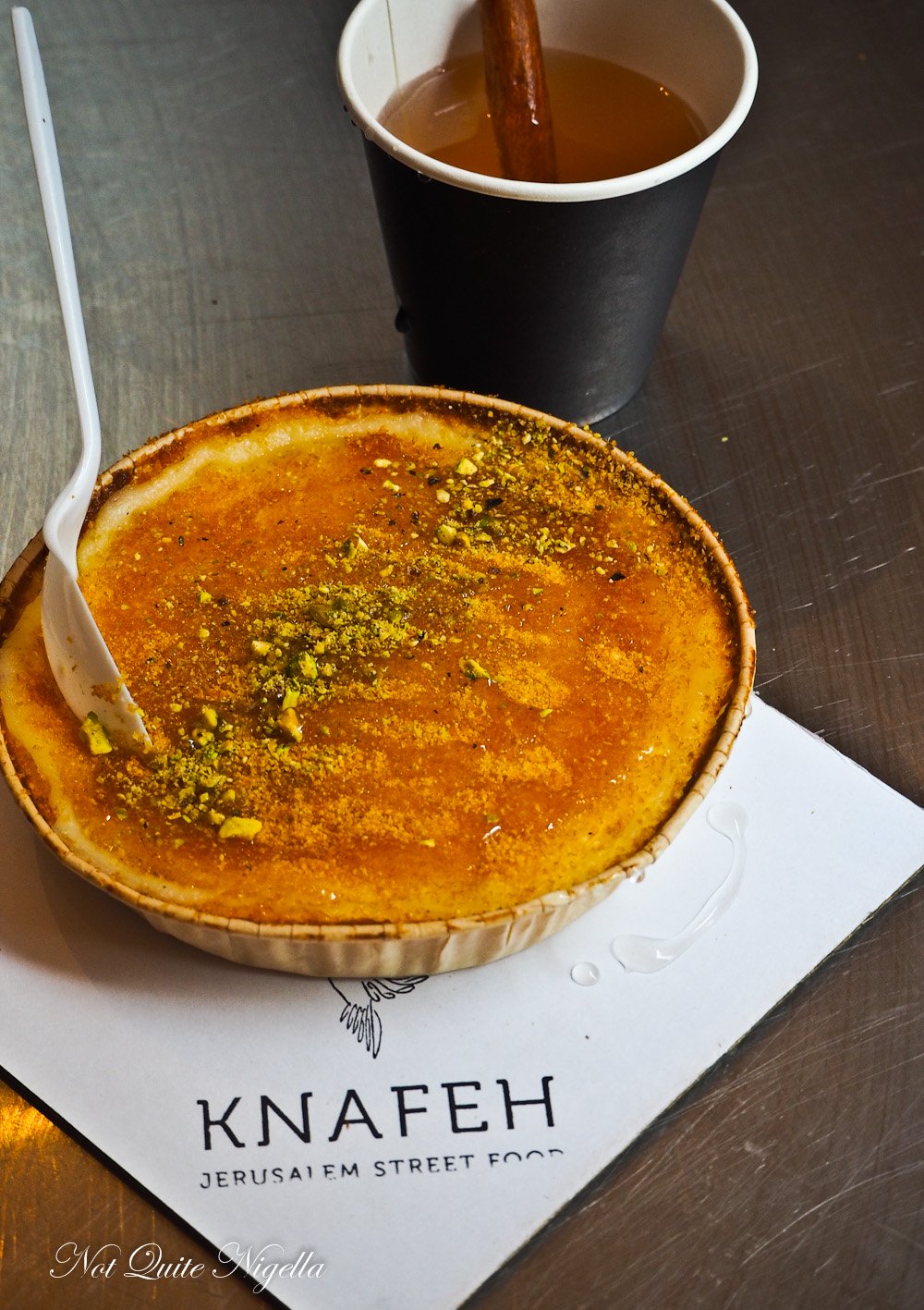 You'd be forgiven for not knowing what knafeh is. It's a Levantine dessert that doesn't often appear on menus. I first had it in Amman where a slice of the thick, rich semolina enriched syrup soaked pastry was served. Filled with stretchy cheese, not unlike a mozzarella it was blanketed in a sweet syrup and then topped with pistachios with a crunchy pastry top. I found it rich and very sweet but it's not until I ate it recently on a visit to Shisha Bar in Croydon Park that I really appreciated it. 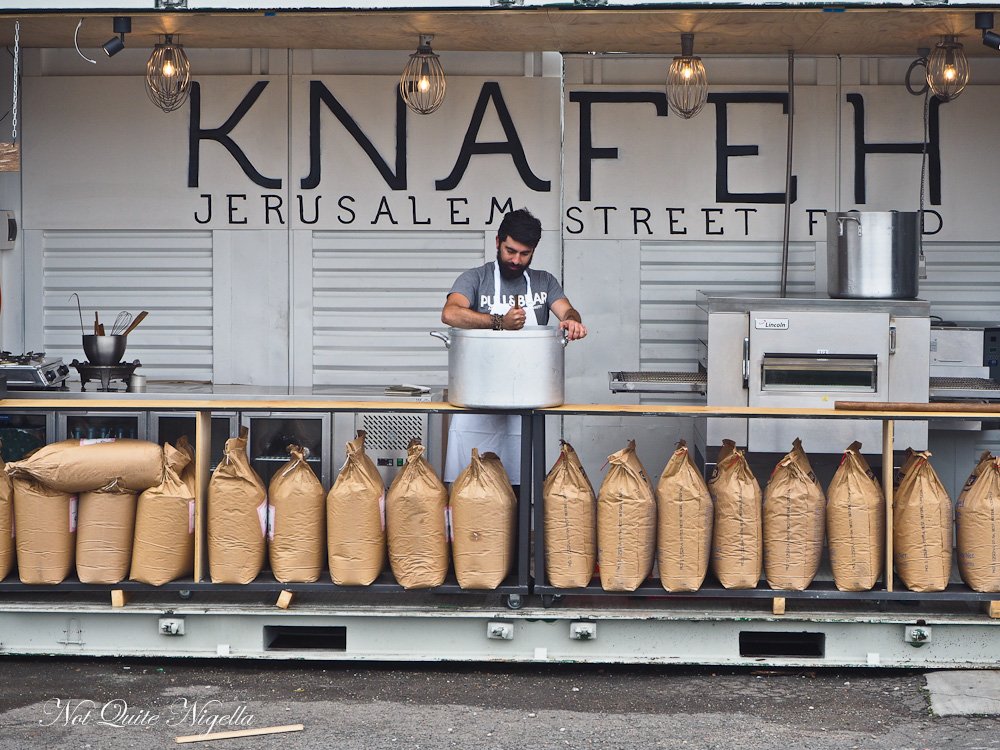 There are two types of knafeh: ashtar (clotted cream) knafeh and jibne or cheese knafeh - Knafeh Bakery's falls somewhere between the two. A third type is also made with kataifi pastry. The version sold at Shisha bar is different-lighter, creamier and less intensely sweet. In fact it is almost like rice pudding or creme brulee as distant cousins. 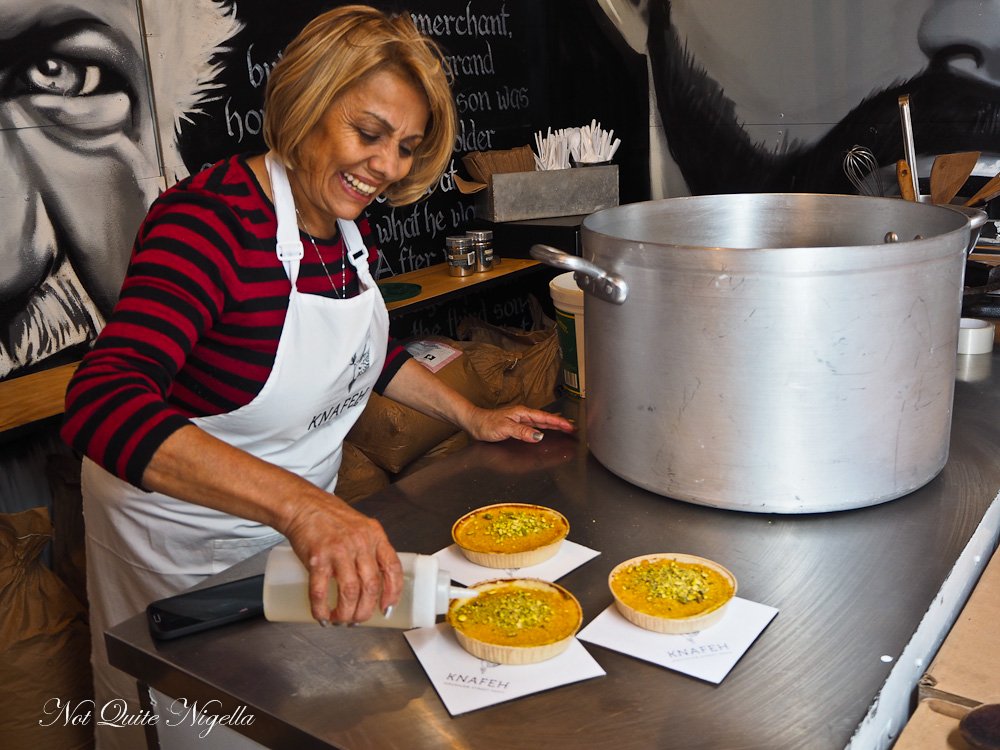 It took Ameer and his mum two years of experimenting to get it right - it needed to be light enough to follow a meal. At Shisha Bar, the dessert became so popular that it was eclipsing the rest of the food. All people could talk about was the knafeh and they would go into the restaurant and ask for an order takeaway. The four family members mum Nabila and son Ameer, daughter Mouna (with a background in finance) and Joey (background in hospitality) decided to open up a standalone Knafeh only bakery - but this time it would be housed in a shipping container and it would move around Sydney and NSW. 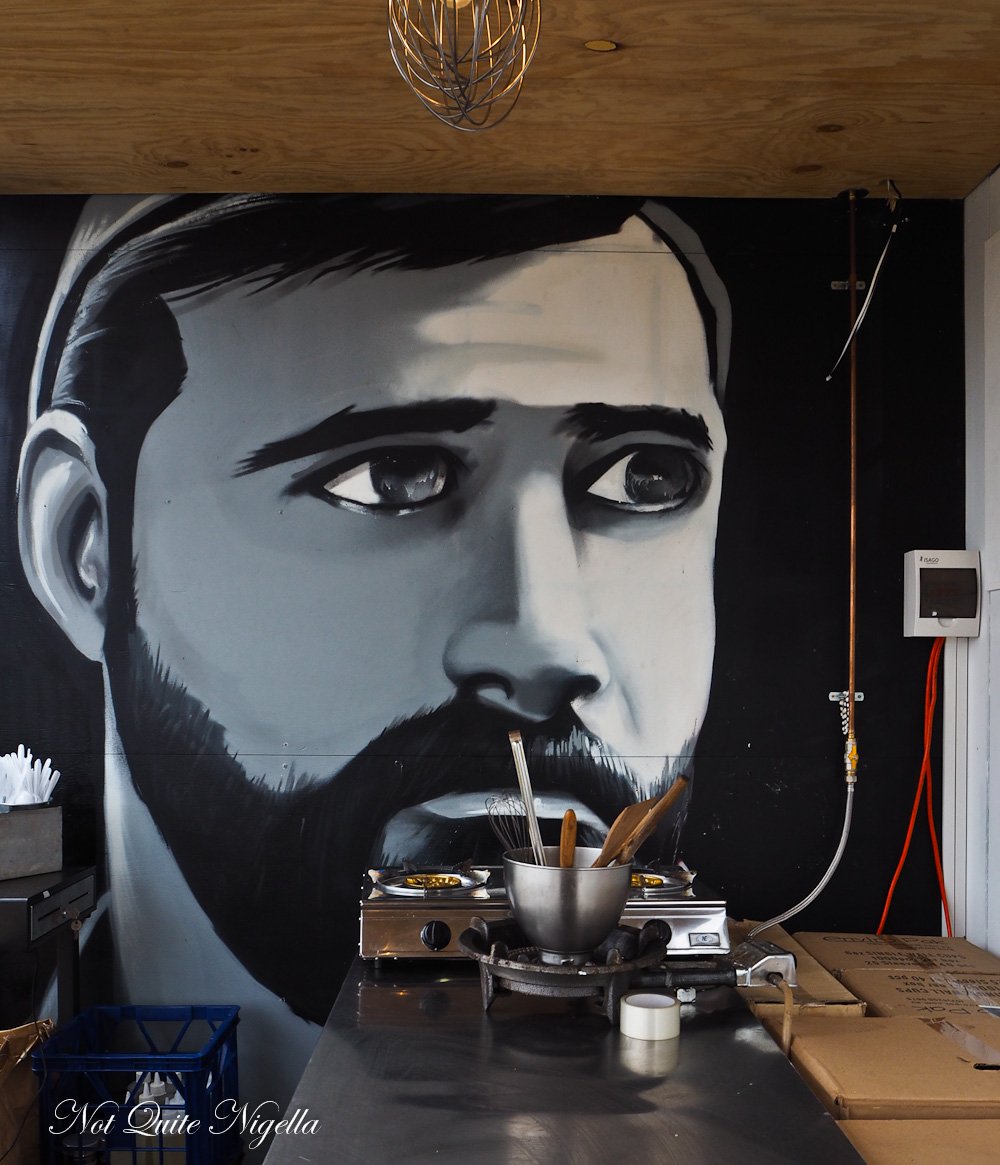 Ameer's background in architecture saw him repurposing a shipping container for the task. He sees knafeh as street food, casually eaten as much of the food in his father's homeland Jerusalem is. Artist Warwick McMiles painted the four figures of a father and his three sons with a fictional legend attached to the drawings. The lighting fixtures are whisks and there are bags of semolina and sugar at the front. 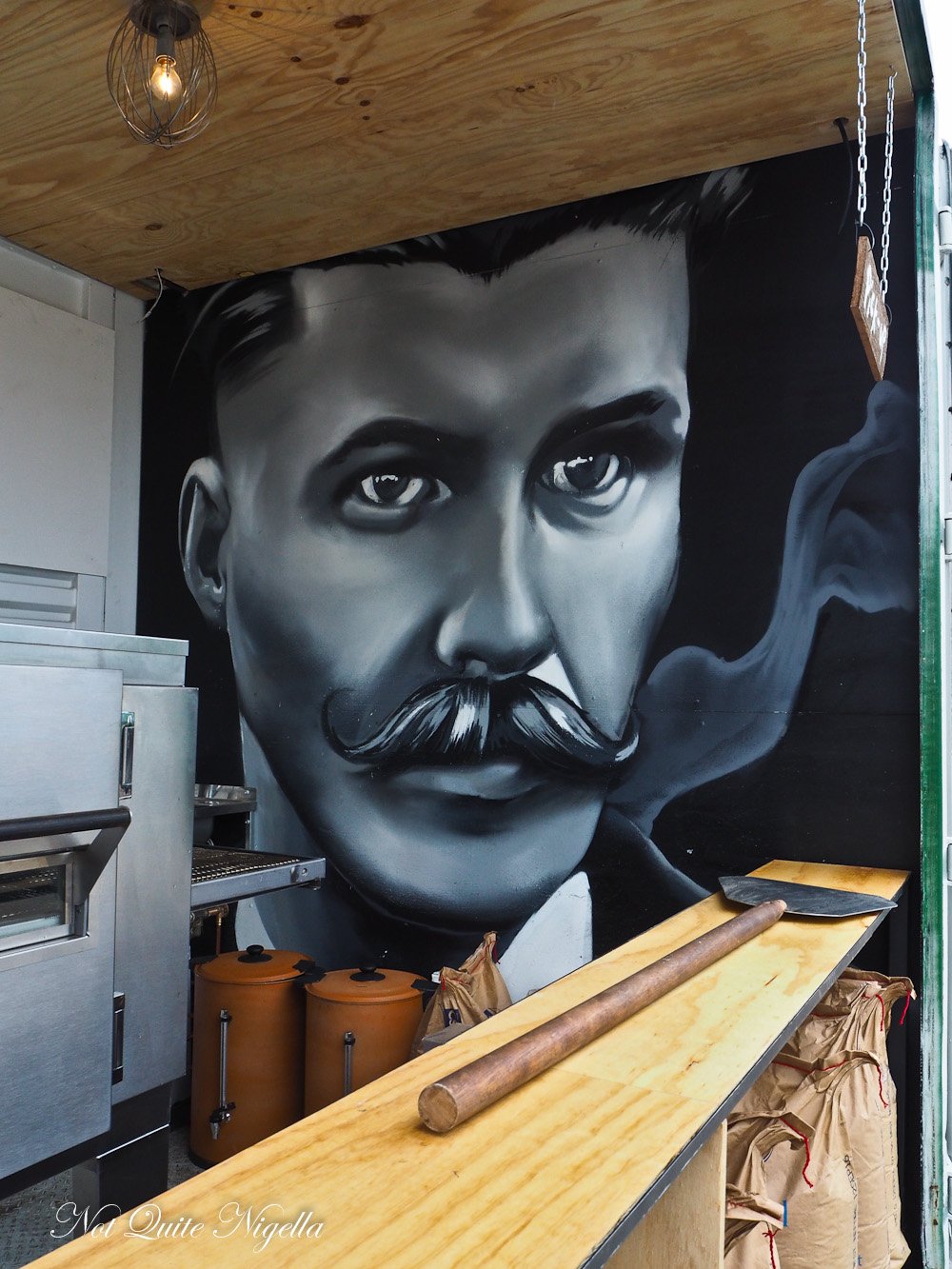 The key is to make each knafeh fresh to order. The base is made in a large stock pot and is then ladled into shallow bowls. The bowl is then passed onto the next bearded chef (it was a conscious decision to have bearded men in the kitchen) who tops it with a crunchy mixture (made up with crushed cornflakes among other family secrets) and these are then baked in the conveyor oven for just over four minutes before being given their final dressing with a light orange blossom syrup and a trail of crushed pistachios. The cheese used is a special cheese made for them by a Lebanese cheesemaker but people can also use mozzarella, halloumi or even tasty cheese in knafeh. The cheese taste is relatively mild, it certainly doesn't give you the impression that you are eating sweet cheese although the long cheese strands are the giveaway. 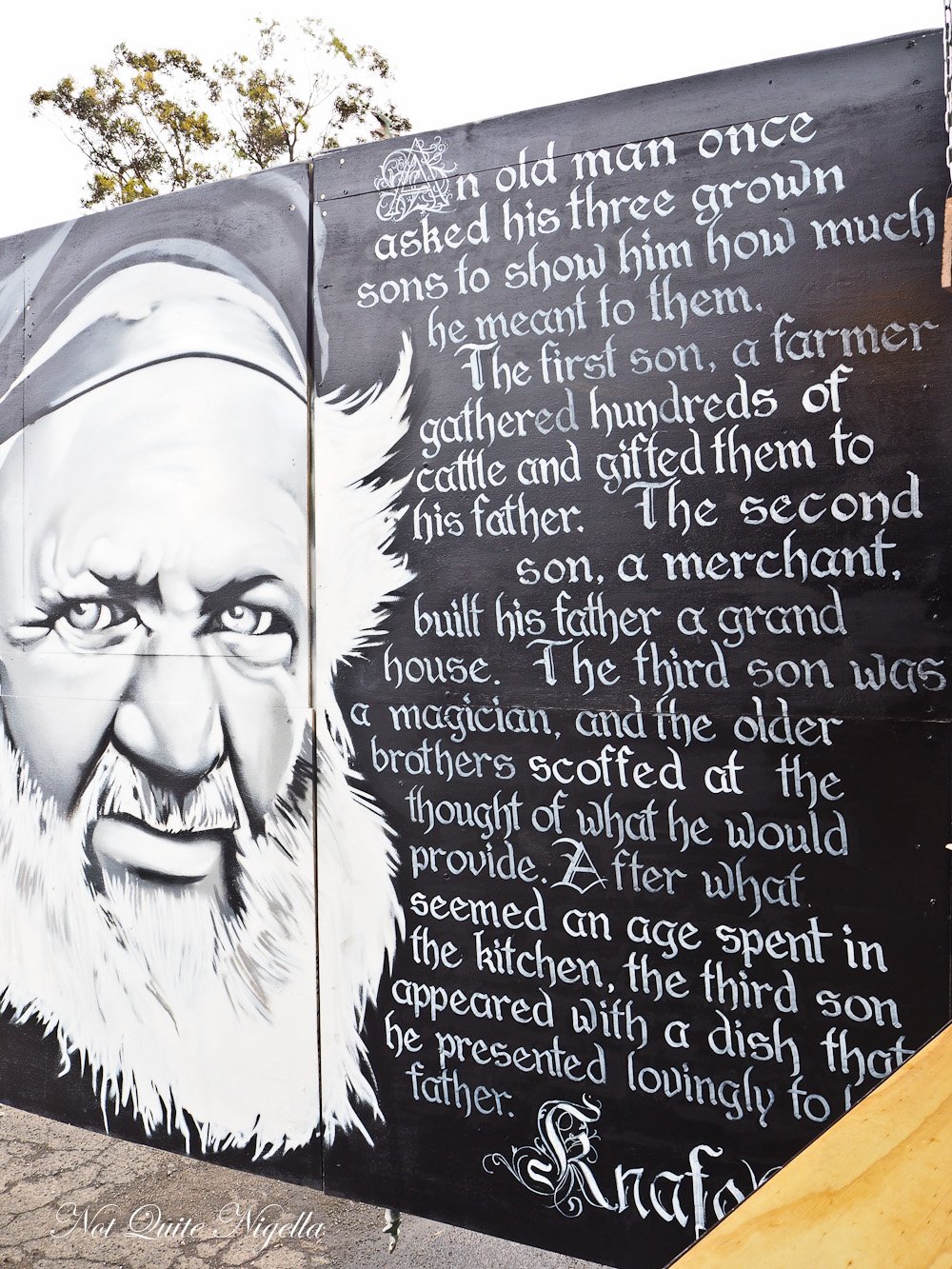 For food lovers, there is no question about travelling for a single dish and here the dish that Ameer describes as "simple and humble" is served with Moroccan cinnamon and mint tea. The success of the first two weeks in Botany has given Ameer impetus and drive to start this in Brisbane and Melbourne with overseas outposts in the clouds. Locations are easy to come by in fact, "Locations choose us," he says. The power of social media means that people tell him where they would like them to pop up and they do a two week stint in each location. 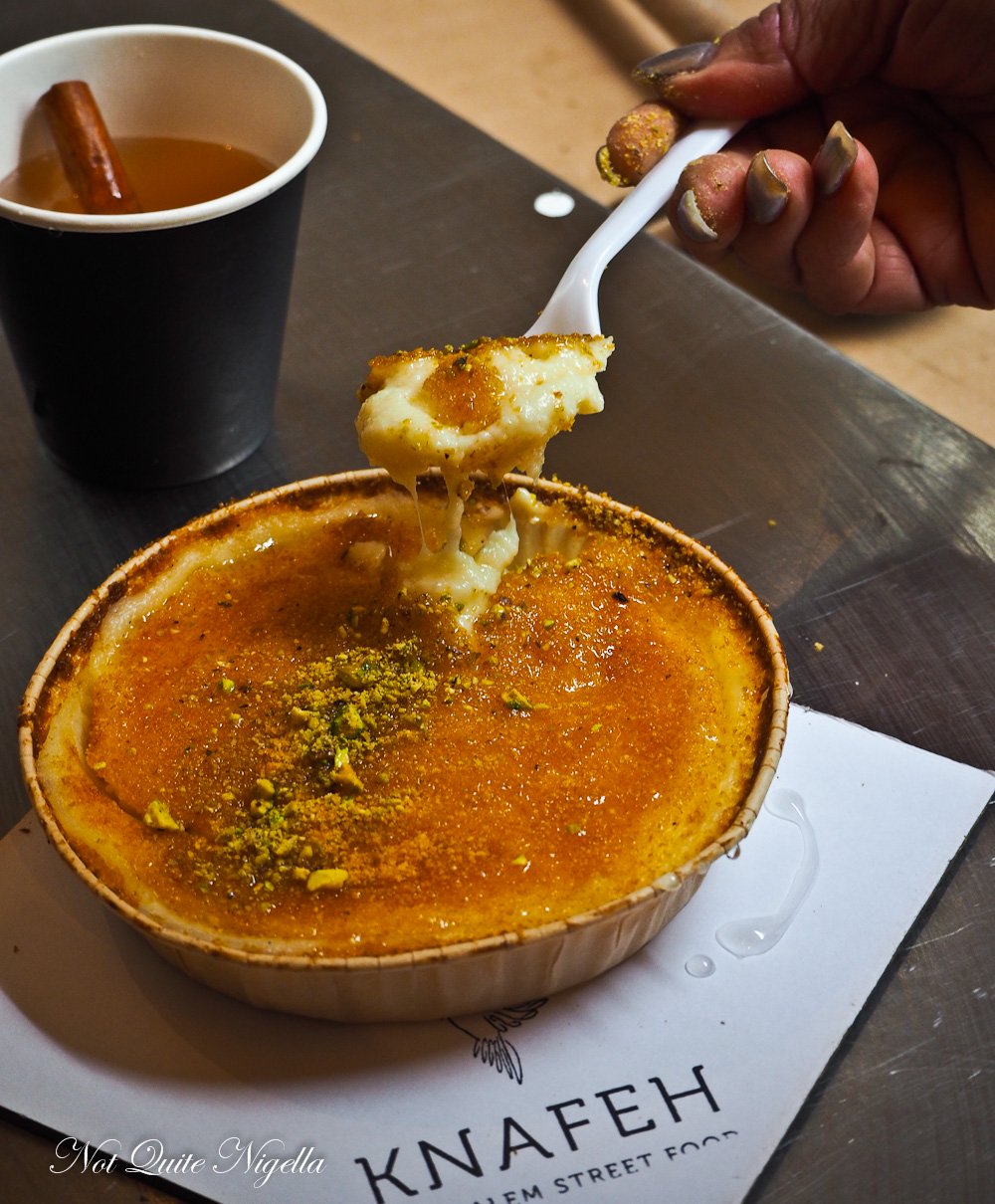 In Botany, they sold from 600-700 knafehs a night from when they open at 6pm at night until late. The plan is to open as late as 3am for the ultimate late night food. Each knafeh is $8 and a cup of sweetened or unsweetened bottomless Moroccan tea $3.

"I'm surprised nobody has done it here...But we're not just a passing fad," says Ameer.

So tell me Dear Reader, would you travel far and wide for a bakery? Do you use social media to follow chefs, restaurants and bakeries? And how late would you want a place to stay open for food? 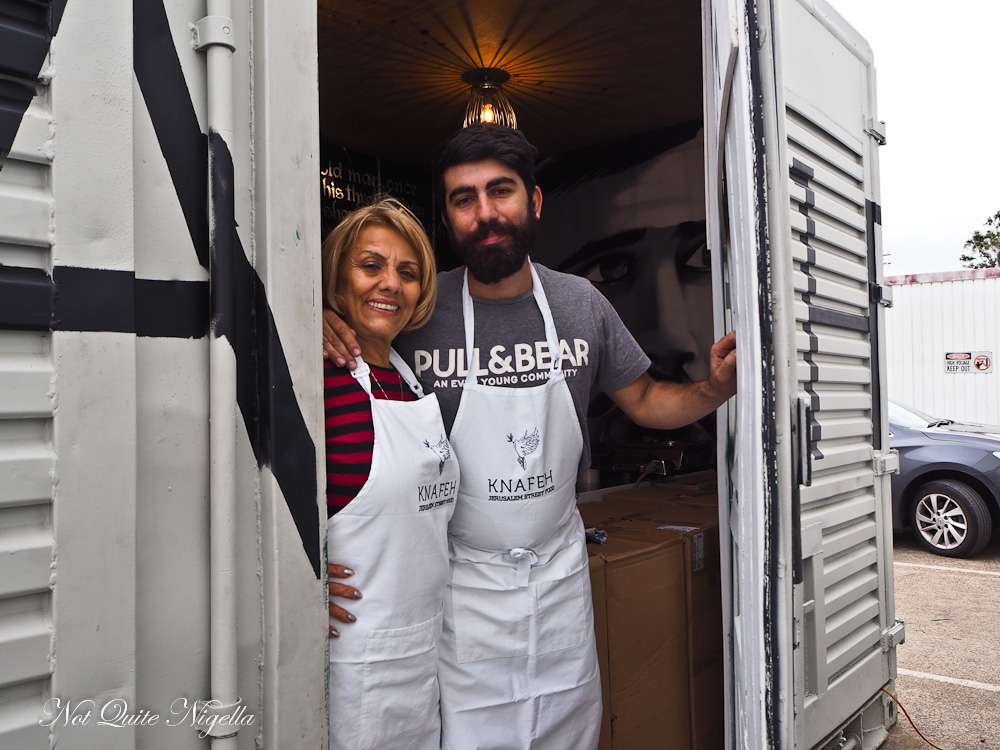 Located at 50 Cosgrove Rd, Strathfield for a limited time from Thursday to Sunday after 6pm til late http://knafeh.com.au/
https://www.facebook.com/knafehbakery