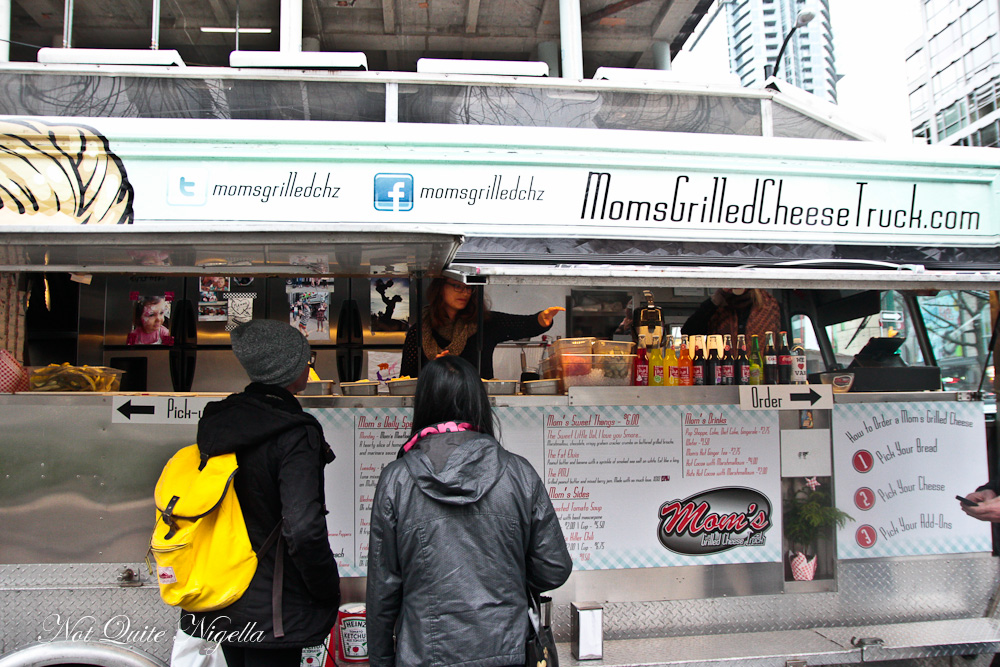 As Christmas draws near in the Northern Hemisphere, the cold and snow starts to set in in Canada. But what is the best part of the cold weather? Cold weather food of course. And even outdoor cold weather food has flourished in Canada. Since 2010, Vancouver's food trucks have multiplied and a smartphone app helps you locate each one.

It's a cold, rainy day when we set out to sample the food truck scene. We look at the choices and given the location and chill we decide to breakfast on a classic dish to give comfort in the cold and wet: grilled cheese or in the case of this food truck, "Mom's Grilled Cheese". It's a simple idea but well done with pieces of lightly toasted bread sandwiched together with the fillings of your choice (ranging from tomato, bacon and several types of cheese) to the "Grilled Cheese Of The Day". 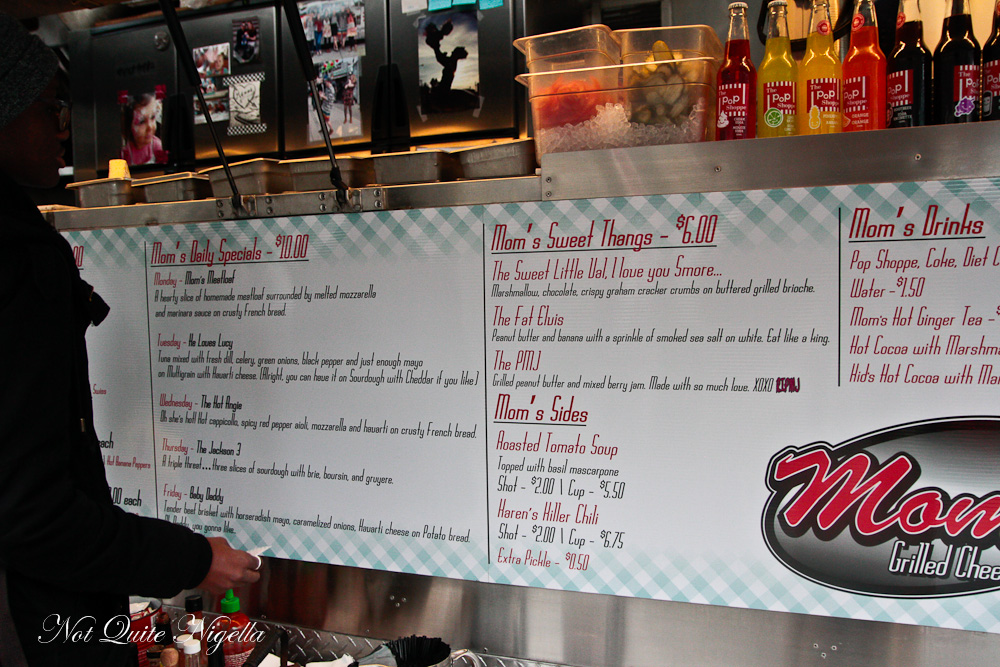 Today's choice is the Jackson 3 which they describe as a "triple threat" with three slices of sourdough with brie, boursin (a soft garlic and herb cheese) and gruyere. There are also sweet grilled sandwiches including "The Fat Elvis" which is filled with peanut butter, banana and smoked sea salt (but no cheese or indeed bacon).

We order the Jackson 3 with a custom made one with cheese, tomato and bacon. They're not inexpensive for grilled sandwiches at $10 each but each sandwich comes with half a dill pickle and potato chips (crisps). Also interestingly, Canada has a dairy tax which means that dairy products are noticeably more expensive than in other countries. 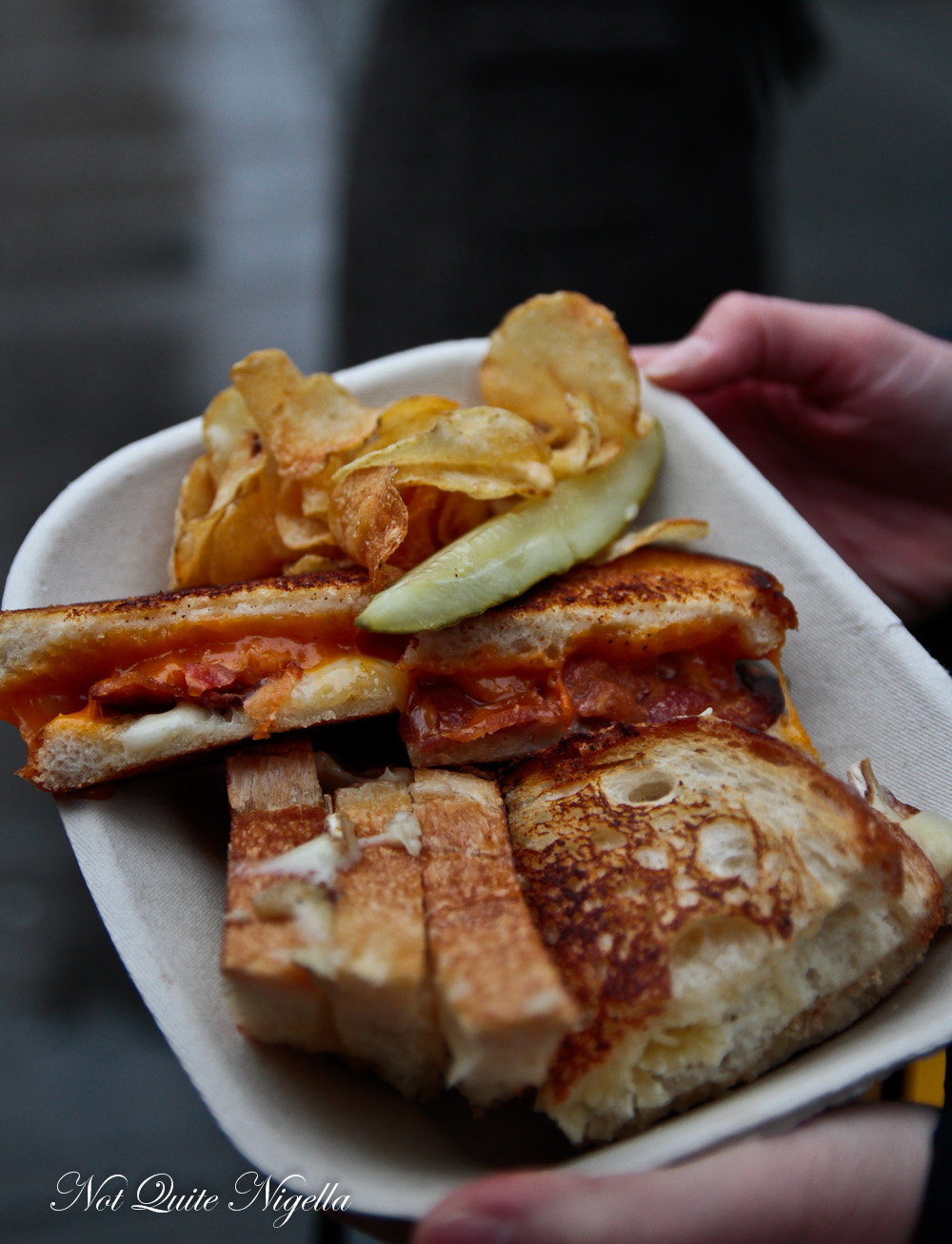 A short while later they come out on paper plates and we dig into them the rain falling lightly around us making the task seem all the more urgent. The custom sandwich is good although I don't get a lot of bacon in my quarter which provides much of the flavour. The Jackson 3 however is fantastic. It's a triple layer sourdough with each cheese layered separately. The garlicky bourson dominates and I eagerly take bite after bite of it. 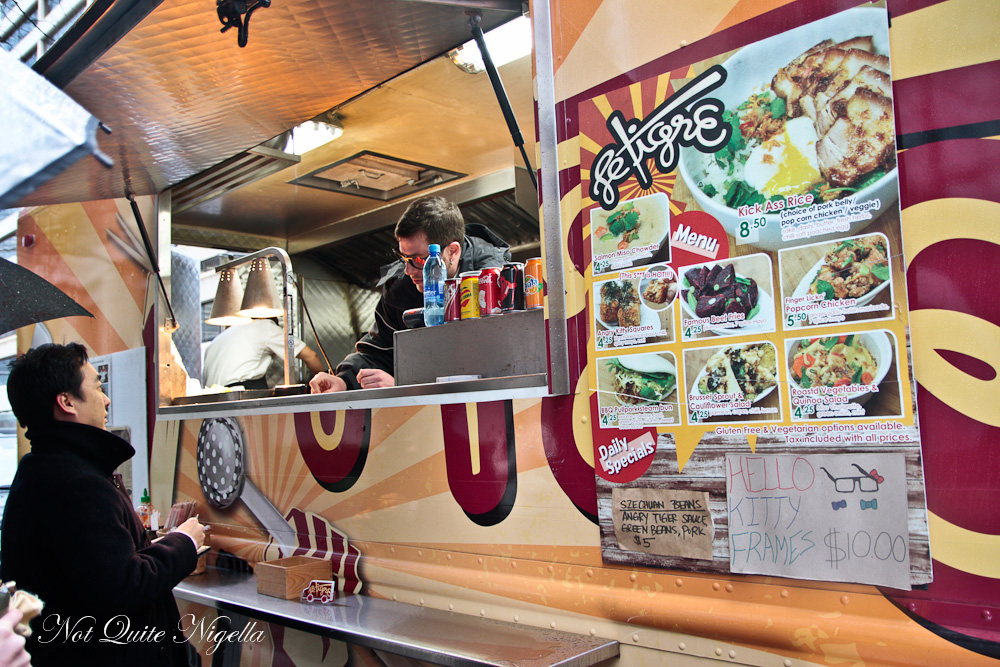 Now that our hunger is truly awakened (and it takes much restraint to not go for another corner of grilled cheese), we make our way to La Tigre, a food truck where the all male staff wear Hello Kitty frames. The chef Clement Chan wearing white frames with a red bow competed on Top Chef recently but he is now back in the truck making "Kick ass rice" and "Angry Kitty Squares." 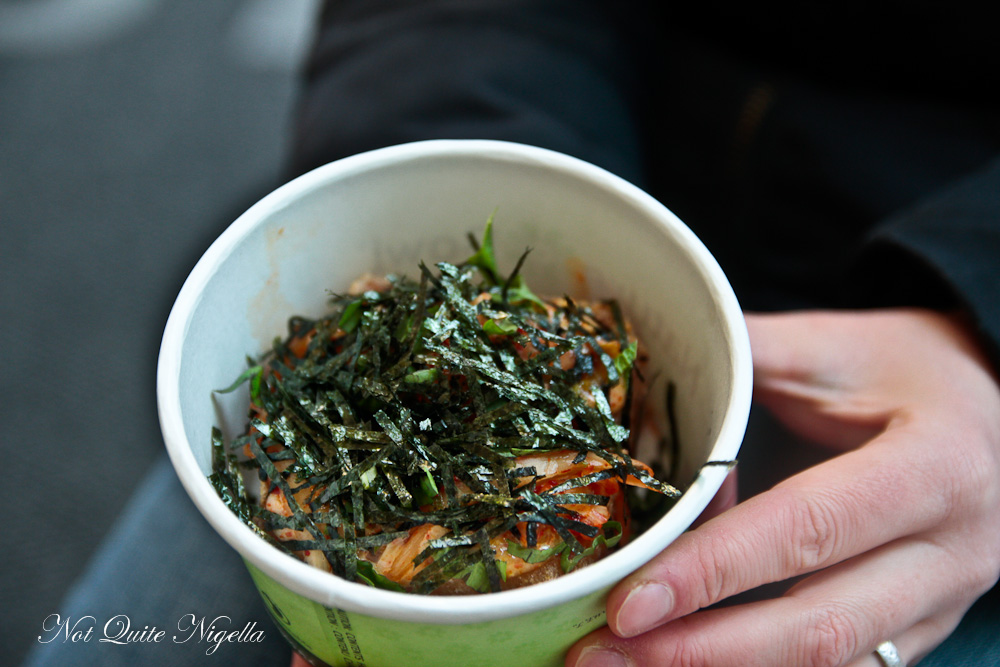 The Angry Kitty squares are four cubes of crunchy kimchi rice squares with basil and chili topped with spicy mayo and nori. They're piping hot but oh so good and they're like a square shaped Asian arancini ball. 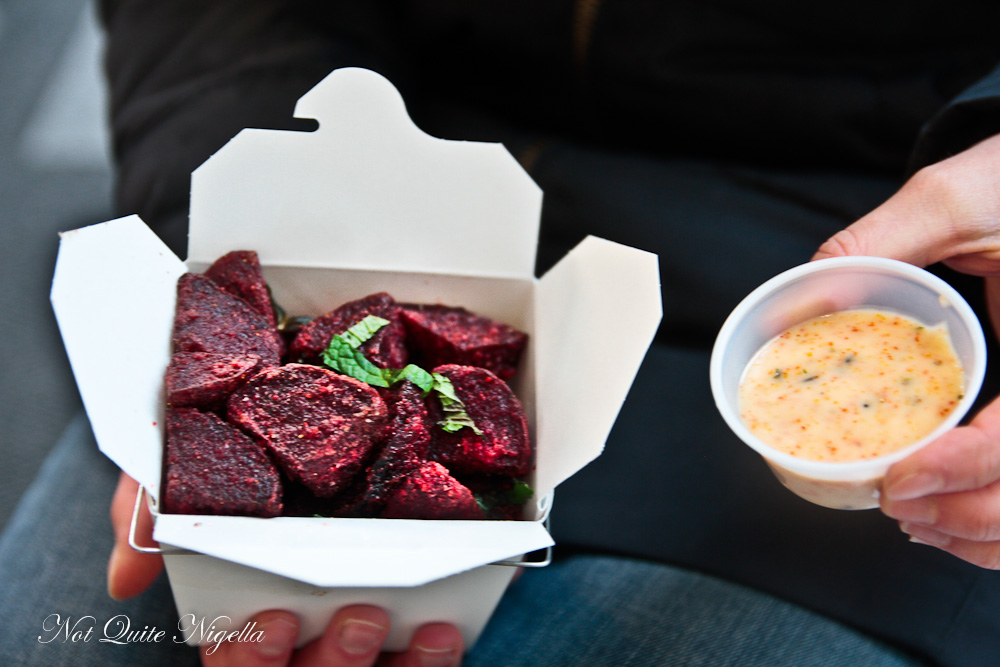 The famous beet fries are beetroot pieces covered in plum powder and deep fried so that they're sweet with a crunchy outer with a thin coating. They come with a 7 spice mayonnaise. 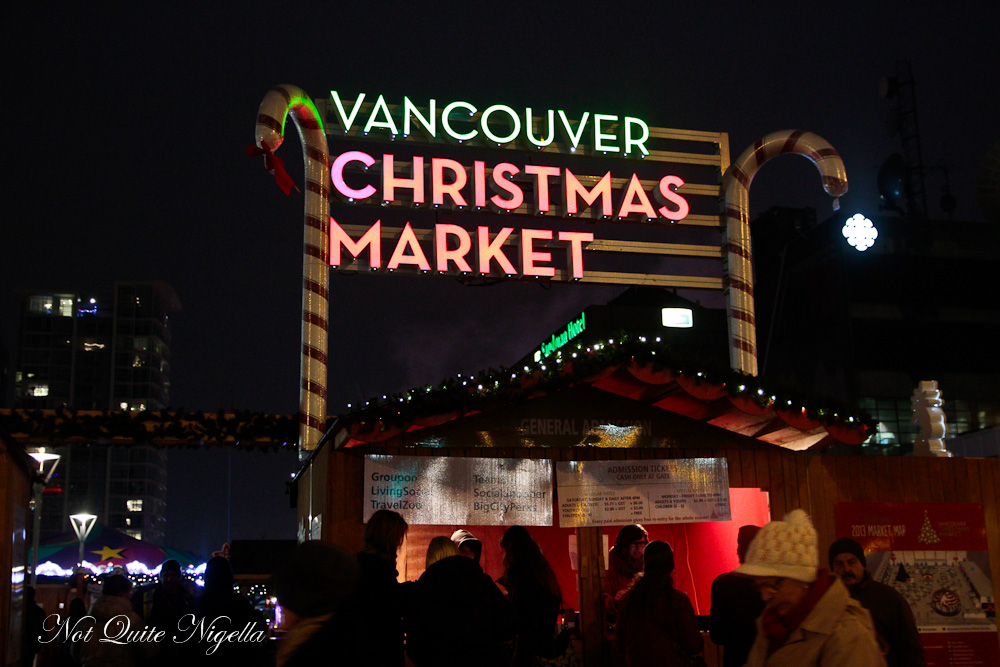 During the month of December, Downtown Vancouver also plays host to the Vancouver Christmas markets which are projected to host 180,000 people through it's doors. The vision of a German Canadian Malte Kluetz, it has run for four years and has about 45-50 stalls of German food, wine and trinkets. There is a small entry fee and this entitles you to enter the markets while food, drinks and rides are extra. 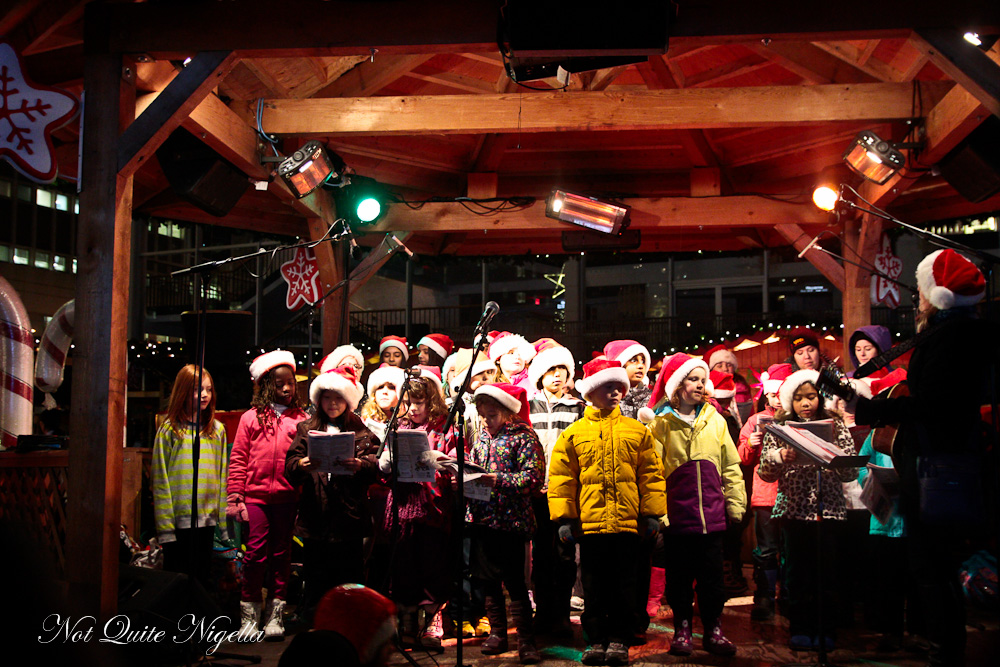 Apart from a customary mug of Glühwein (sold in a mug that you can buy to take home or just rent for the duration of your time there), there is also Feuerzangenbowle a rum based mulled wine that is sweeter. To make this they drench a large sugar pyramid with rum, set it aflame and add it to the punch mixture. 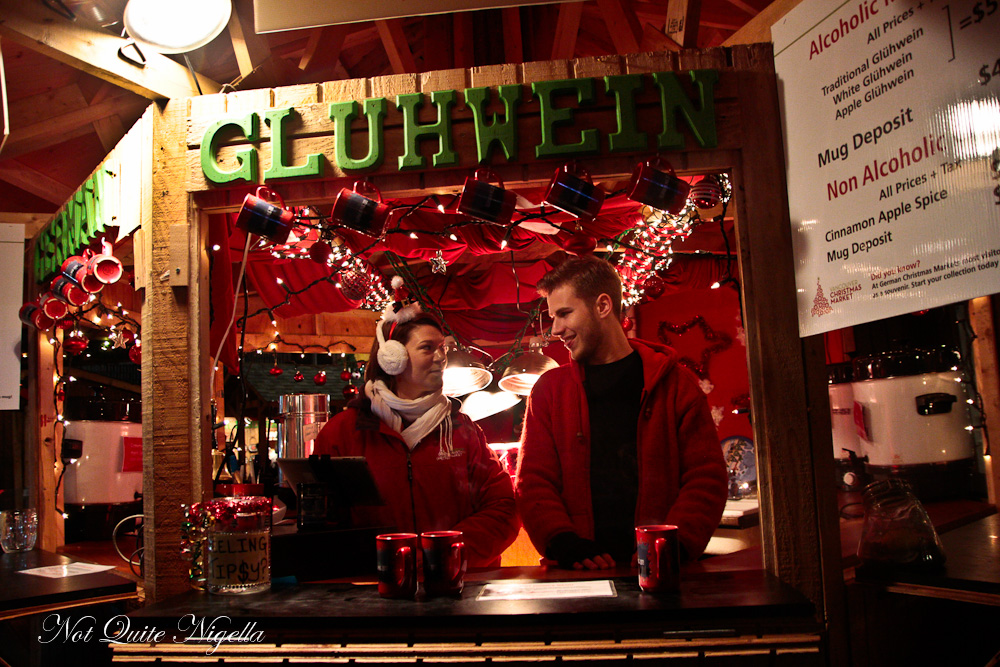 Kids line up for the carousel while groups of friends and couples on dates try waffles, schnitzels, baked apples and kartoffeln and flammekueche (similar to a pizza). A children's choir sings the gamut of Christmas tunes imbuing the air with a festive spirit and the chilly night air seems a little bit warmer once you get some Glühwein into you. 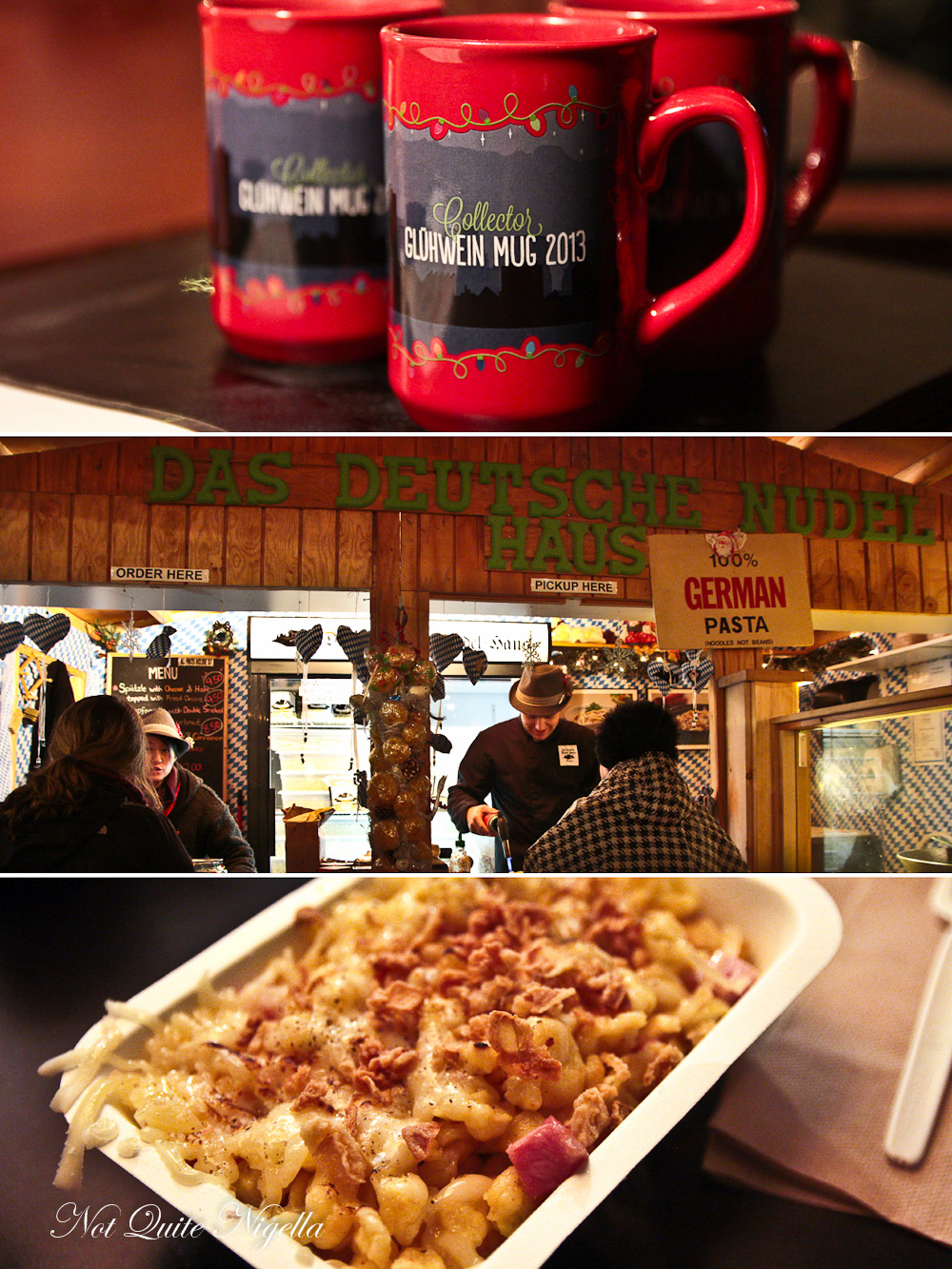 Spatzle with cheese and ham $9.50CAD

At the spaetzle stand we try a serve of spaetzle served with ham and cheese - there is also a sweetened version with sugar, cinnamon and apple sauce. The spaetzle is given a final blowtorching to crisp up and melt the cheese and we eagerly say yes to the fried onions which give it additional crunch. It's just what we need to warm us up. 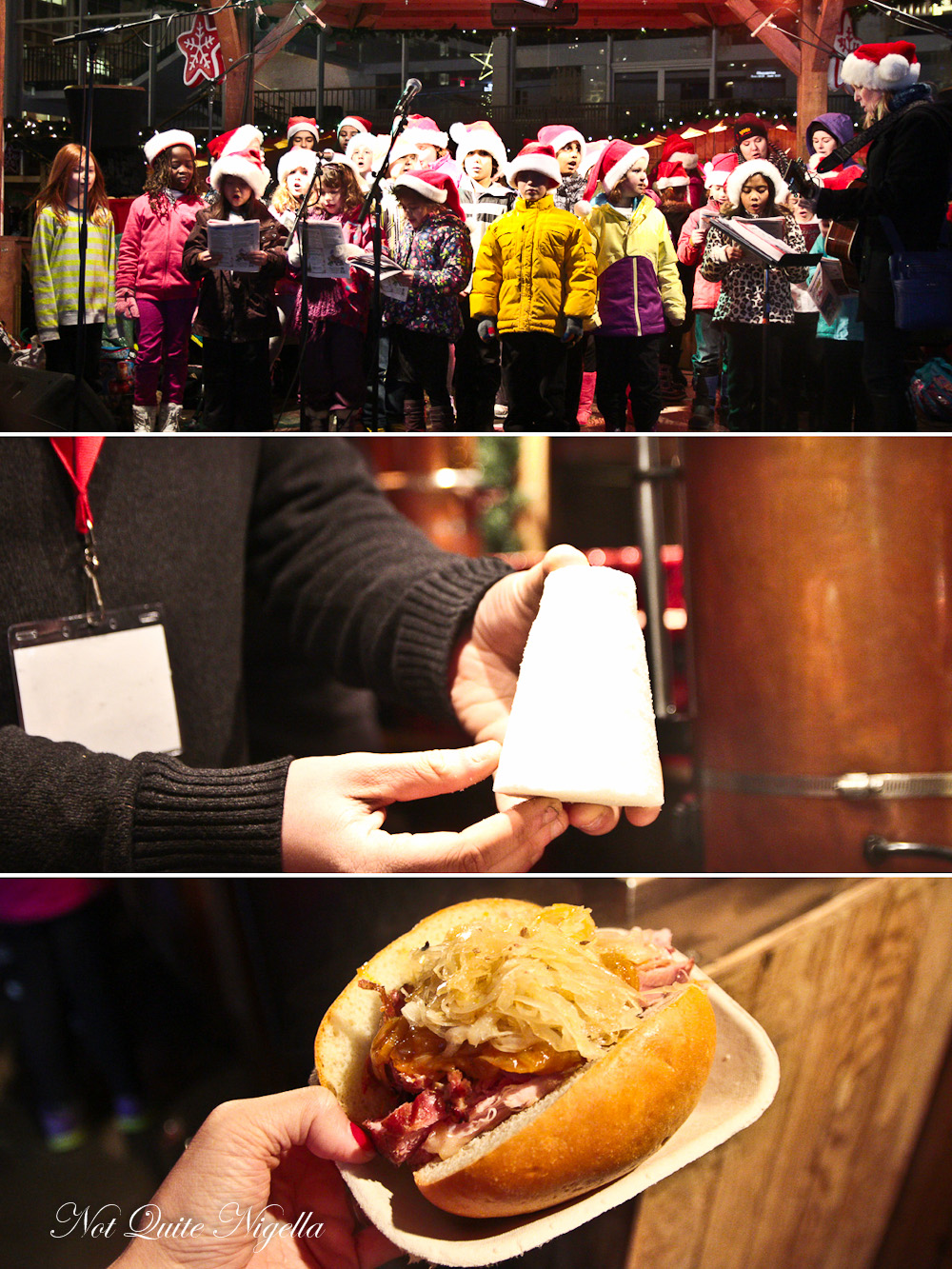 We also stop by the Haxn Haus stand that sells pork knuckle. You can either order the whole pork knuckle or they can halve one and place it on a bun with some sauerkraut. The pork knuckle is deliciously soft and the sauerkraut fabulous. By now the rain is falling in heaving sobs and we retreat to seek shelter. 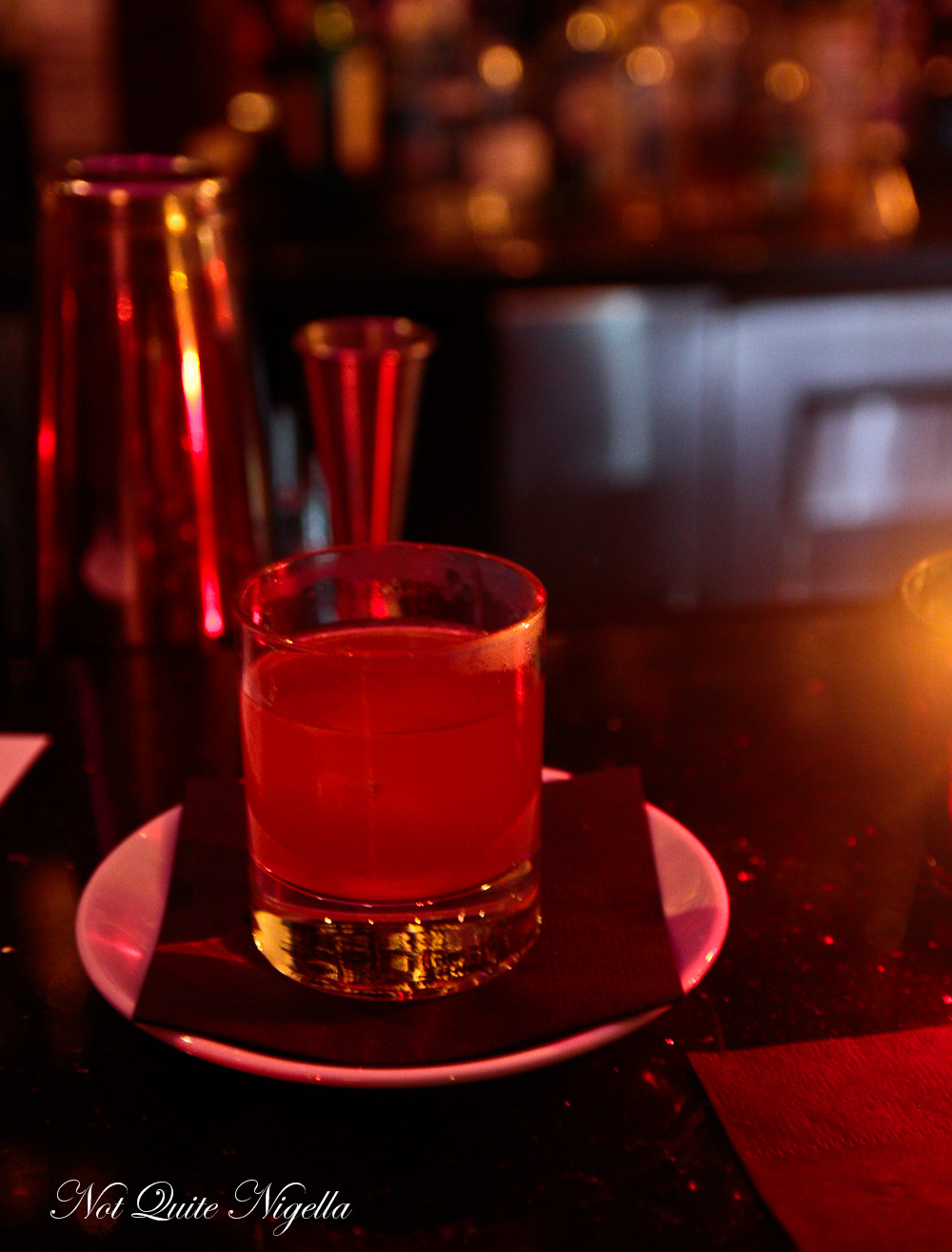 A few blocks away is Uva bar which is run by bartender and bitters creator Lauren Mote who tends the bar with skill, efficiency and warmth. She's contending with a group of post work Christmas party people who offer up a loud shriek every minute or so and she responds with cool drollness. Customers can order the "Bartenders special" where Lauren will choose a cocktail based on your preferences. Cold and wet, I order a hot spiced rum that does its job quickly. 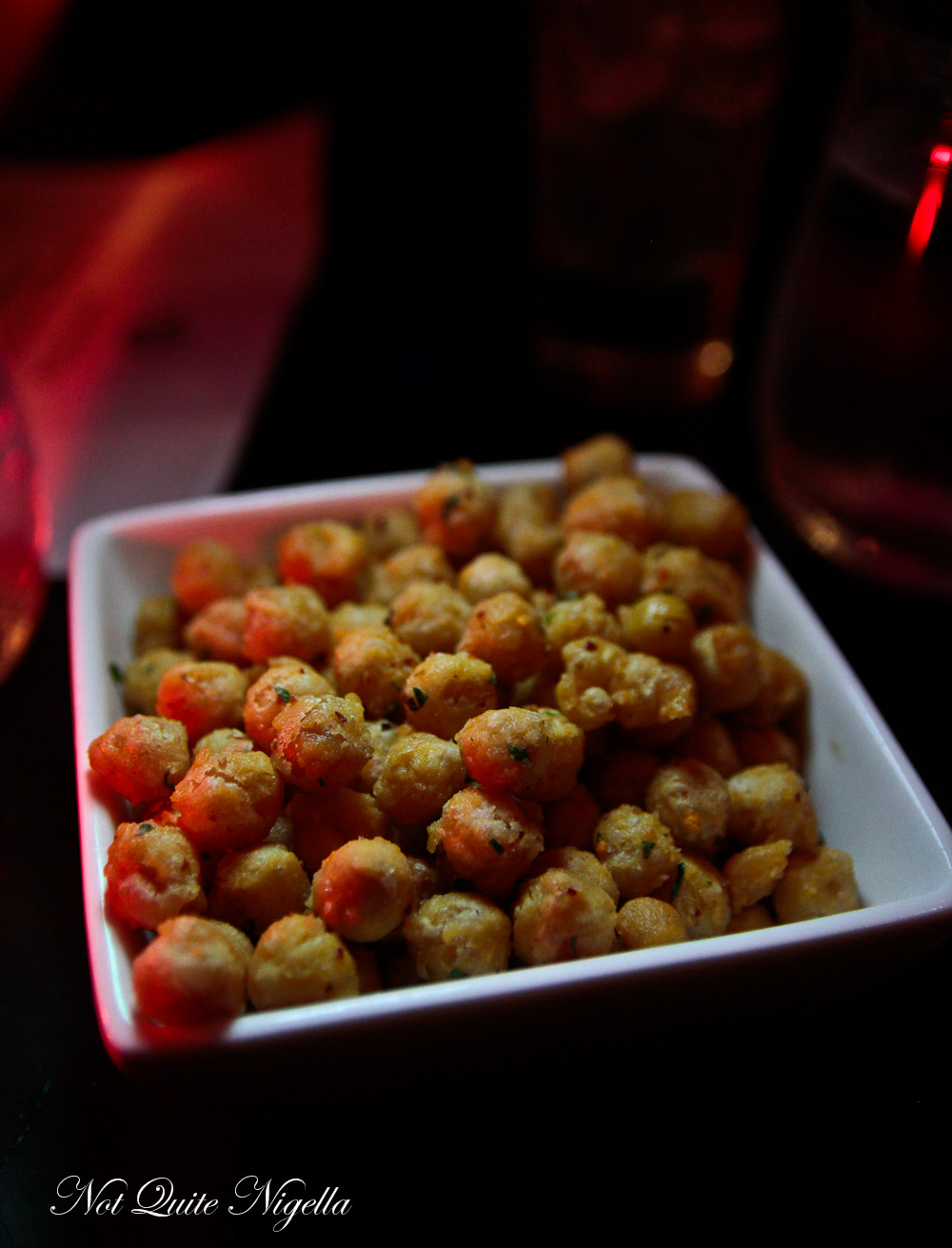 Lauren's baby, her Bitters extracts range called Bittered Sling is a range of aromatic bitters to add into cocktails, drinks or cooking. They're designed to shine through and add aroma to even the most complicated spirits. A range of seasonal bitters also follows throughout the year released according to the fruit or ingredient's season. She gives me a Malagasy Chocolate Bitters which can be used as a substitute for a vanilla extract or in a finishing sauce as they contain no sugar. 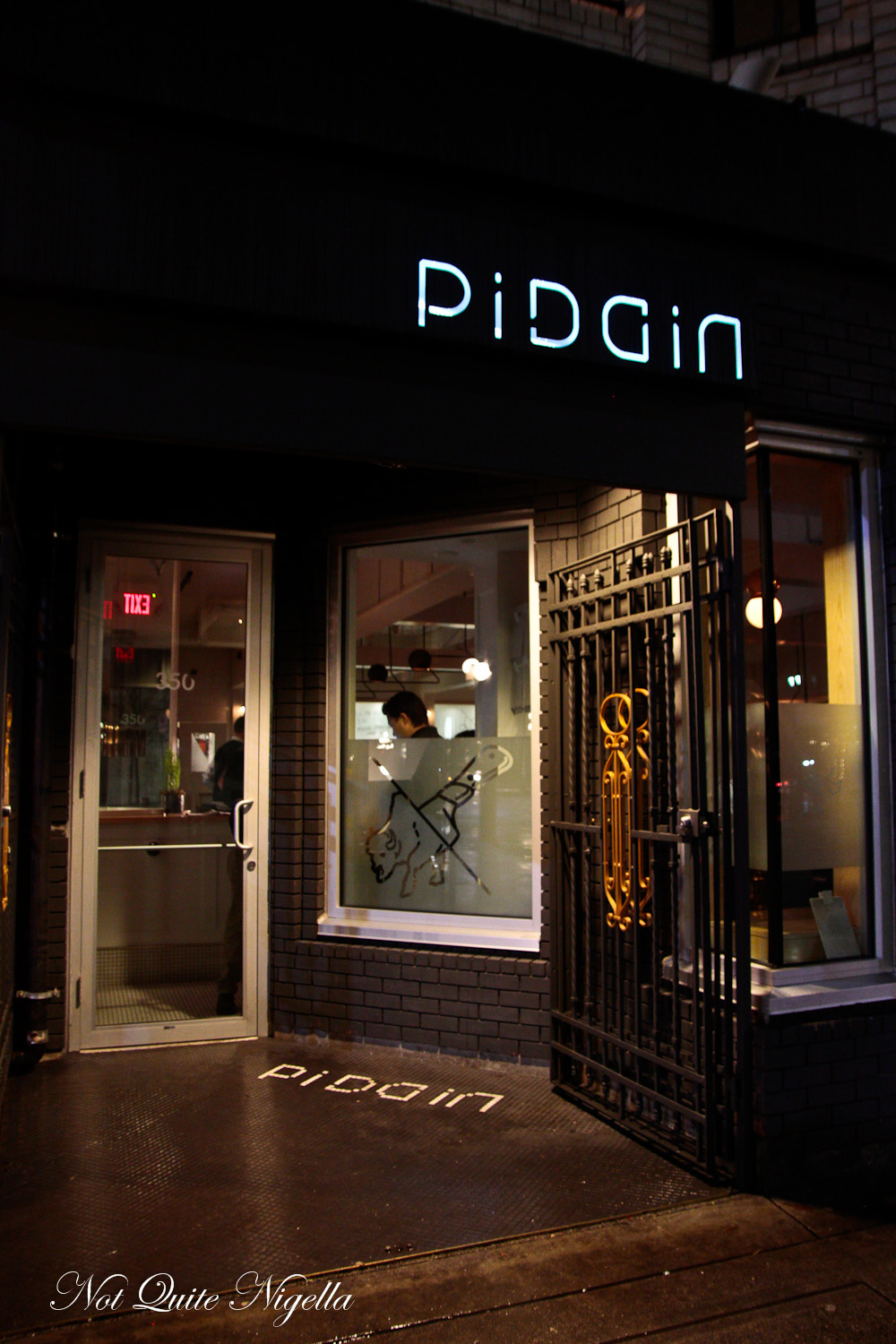 With our cheeks rosy and warmed up, we cab it to our final destination of the evening: Pidgin in Gastown. It was recently voted one of the top restaurants in Canada. Here Winnipeg raised chef Makoto Ono creates his very unique dishes that are a mix of East and West - hence the name Pidgin. The restaurant is located in an area of Gastown with a homeless population. Two homeless men walk past the restaurant. 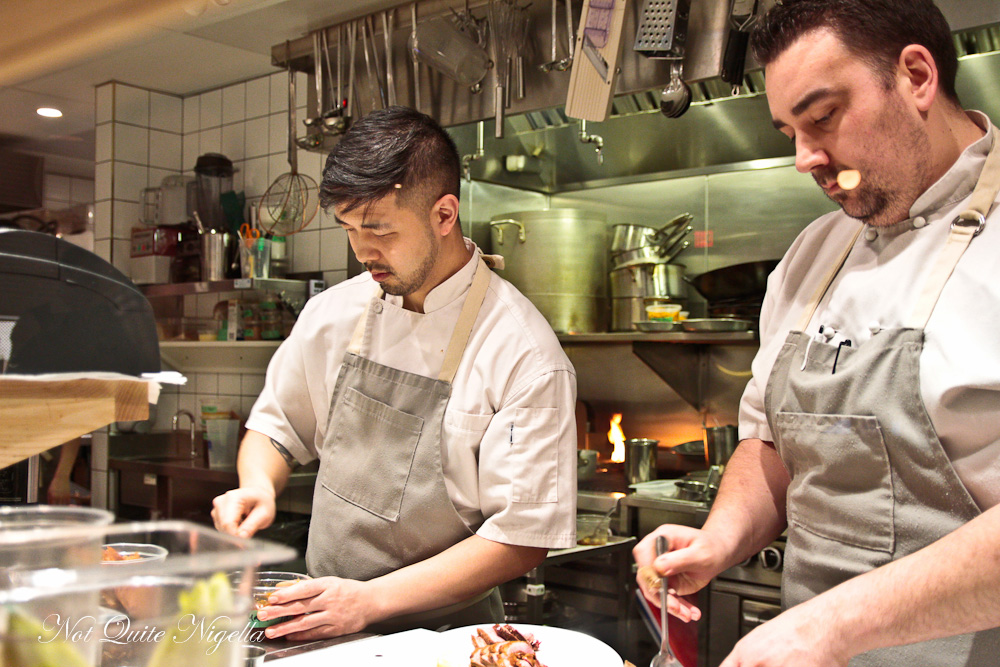 The best table in the house is the chef's table right in front of the open kitchen behind glass. Makoto and his team work quickly and without fuss sending out dish after dish. Two lobes of foie gras sit on the counter along with two upturned duck legs, claws pointed skyward. A squeezy bottle of red curry oil sits closeby to him on the bench. Lou Reed's "Walk on the Wild Side" plays and the restaurant is completely full this evening. 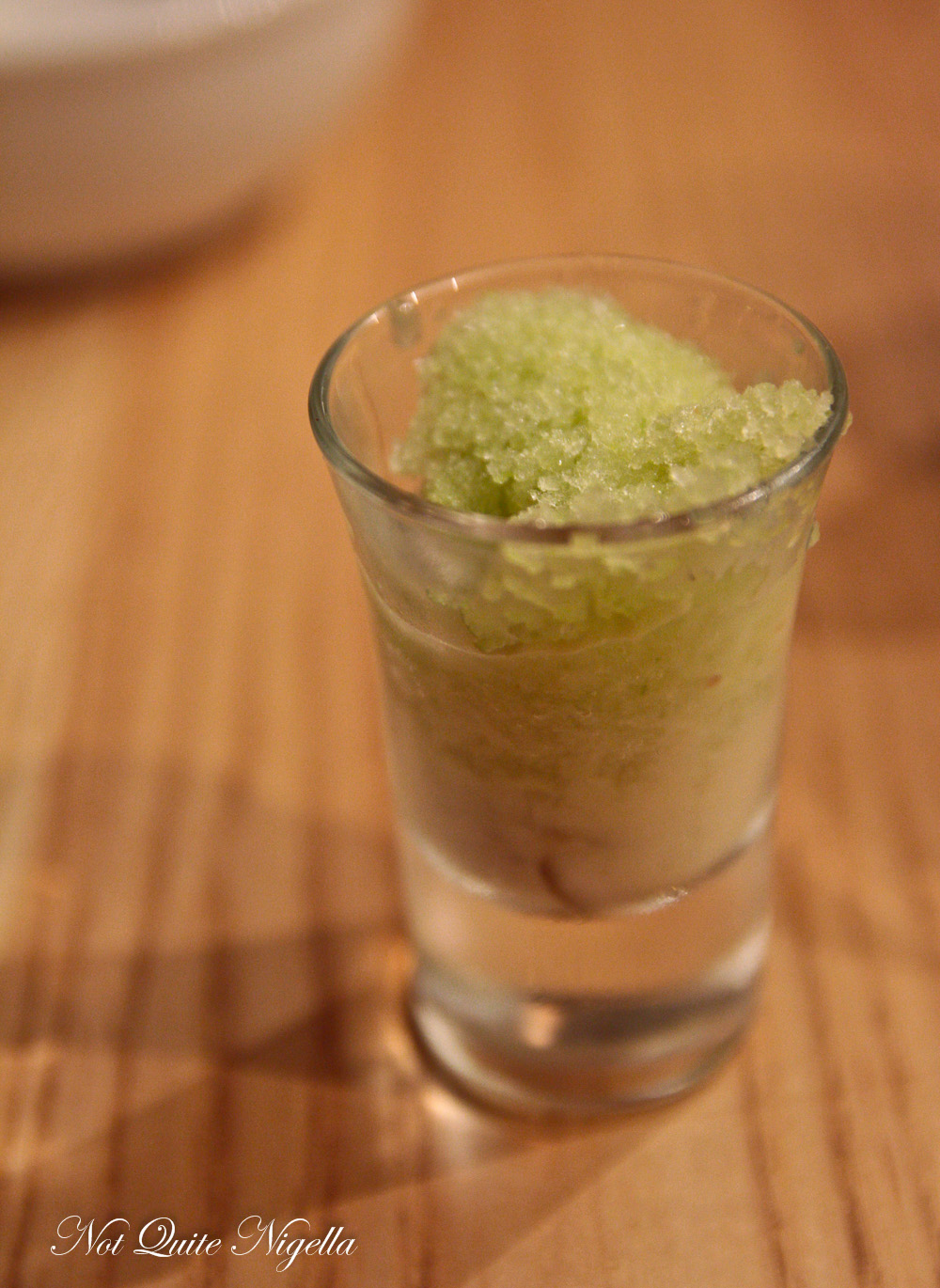 If anything will awaken the senses for a meal, it's an oyster shot with oysters from Read Island. They're served in a shot glass with a horseradish emulsion and apple granita. It is hot, cold and creamy at the same time! 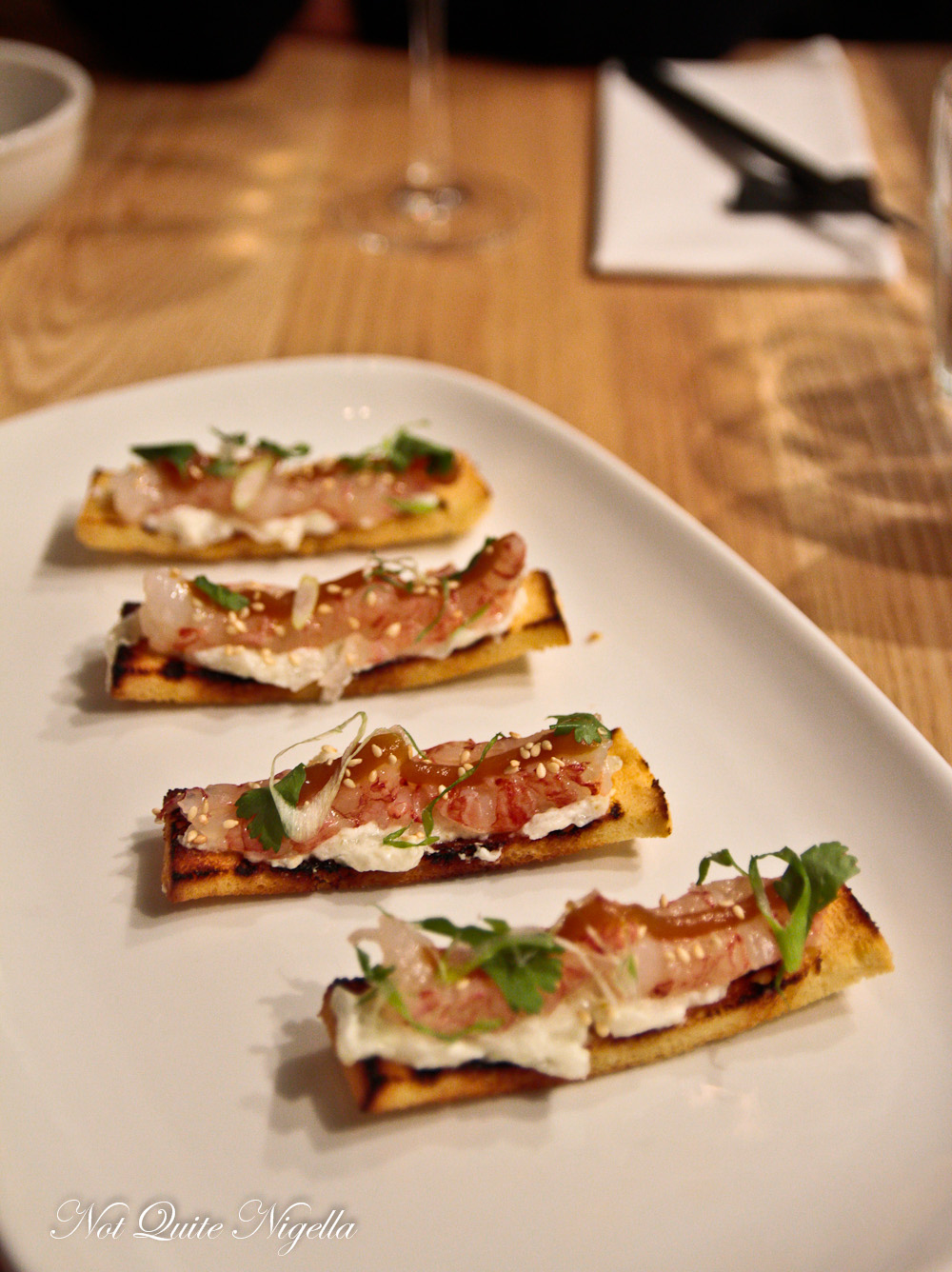 I was curious about the humpback shrimp as B.C. is known for shrimp or prawns. I am told that the humpback prawns are similar to spot prawns except that there is more texture to them. Thin pieces of toast hold a creamy daikon slaw with a peeled prawn in the centre and a stripe of the bisque gelee made from the shells of the prawns down the centre of the prawn. Ahem shrimp ;) 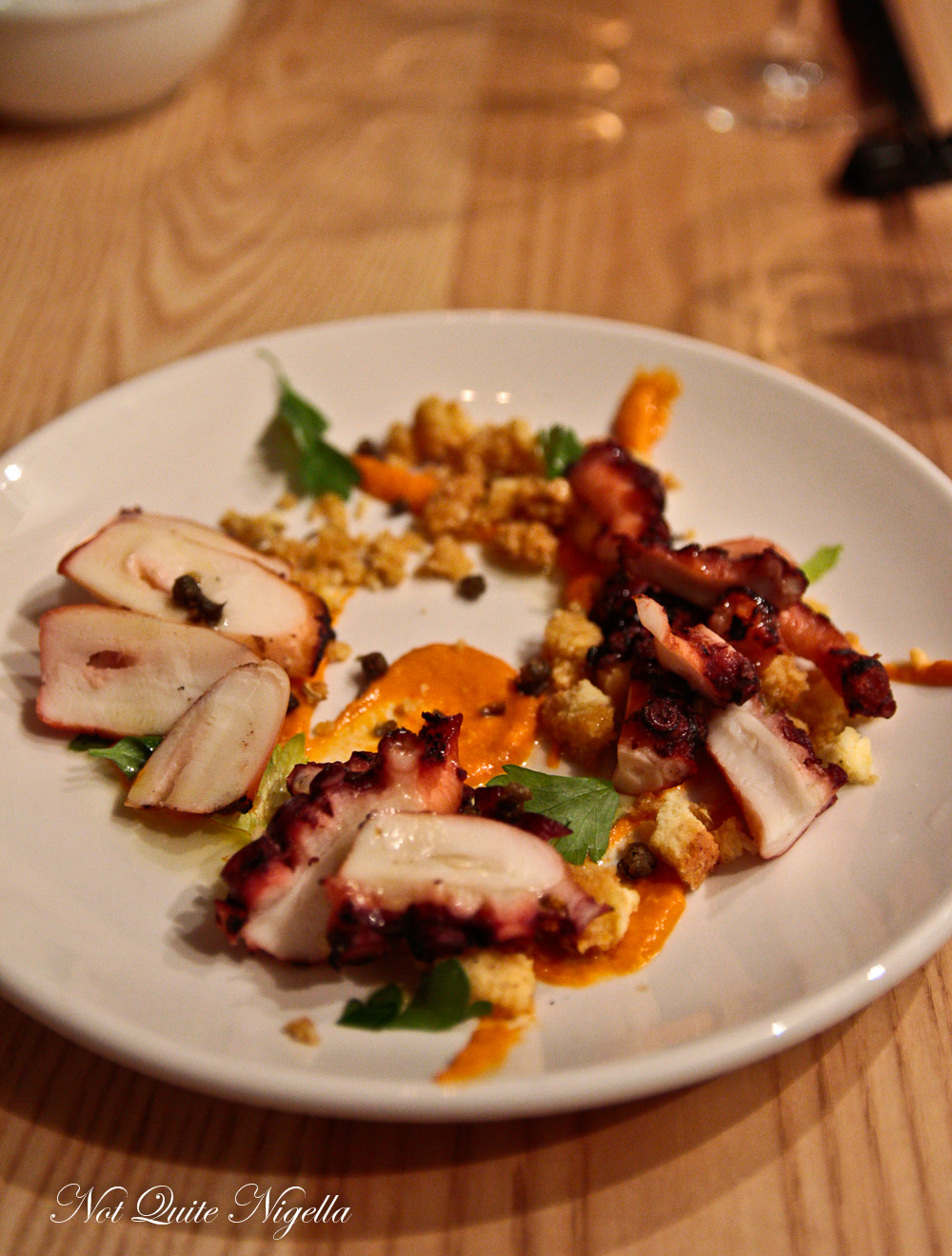 One of my favourite dishes is the tender octopus, sous vided in olive oil, lemon and sake served with a romesco sauce and sweet, crunchy crumbs of aniseedy fennel biscotti. The textures and flavours are delightful and the olive oil has a distinct flavour shining through. 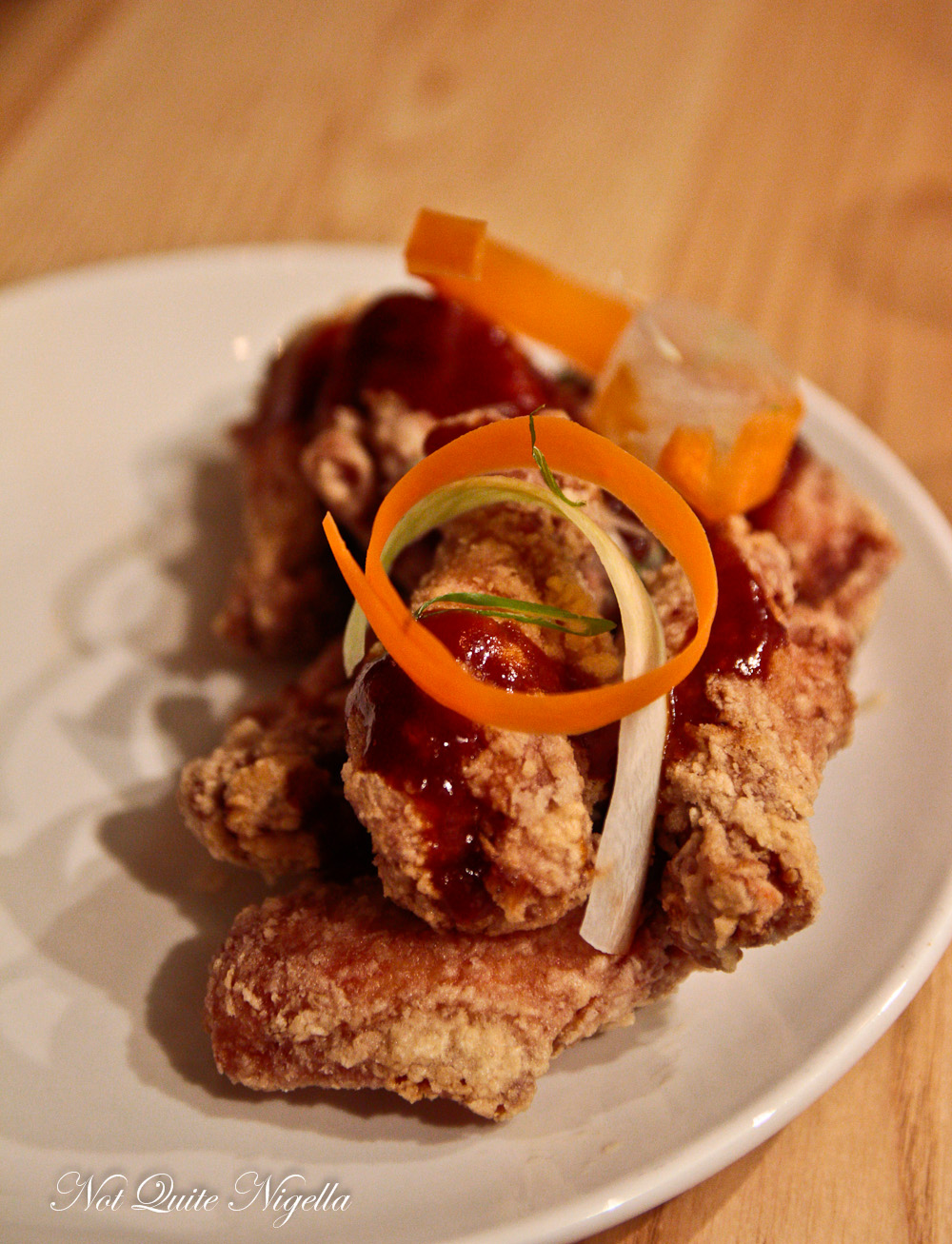 Okay who ordered the fried chicken? Yup that was me -and that was also me that dropped my bag under the table and necessitated a broom sweep to retrieve it. Back to the fried chicken wings, they're crunchy and piping hot with a bubbled texture to the skin (actually just like my mum makes them!) and are served with a gochujang sauce. 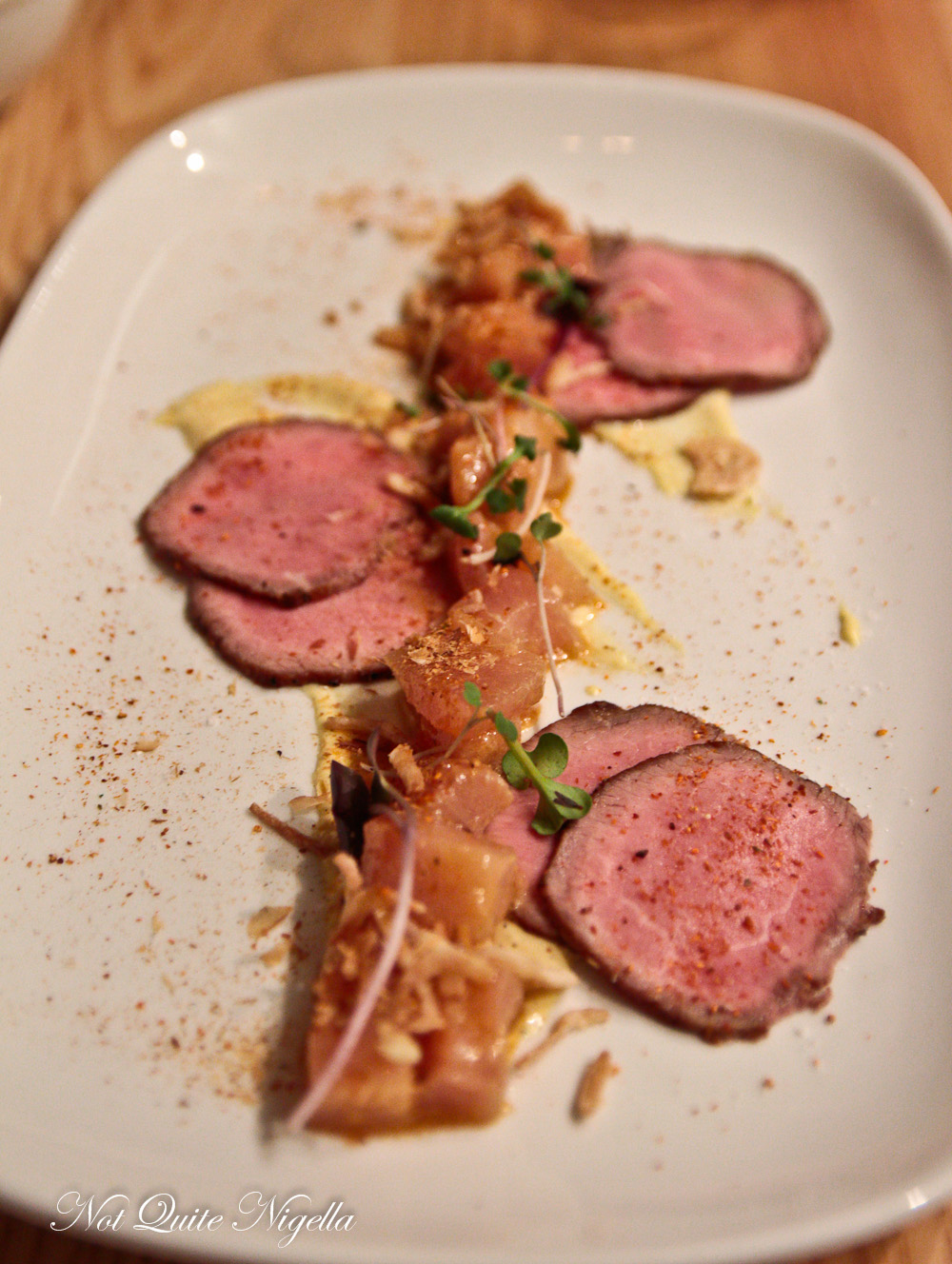 The vitello tonnato is a classic example of east meets west and it is suggested that it is perhaps a tribute to his Italian business partner Brandon Grossutti who runs the floor. There are thin slices of veal topped with cubes of albacore tuna. On the base is fried egg emulsion that is salty and rich. It is finished with a sprinkling of togarashi Japanese red pepper. The dish has a creaminess from the tuna and the pink centered veal melts on the tongue. 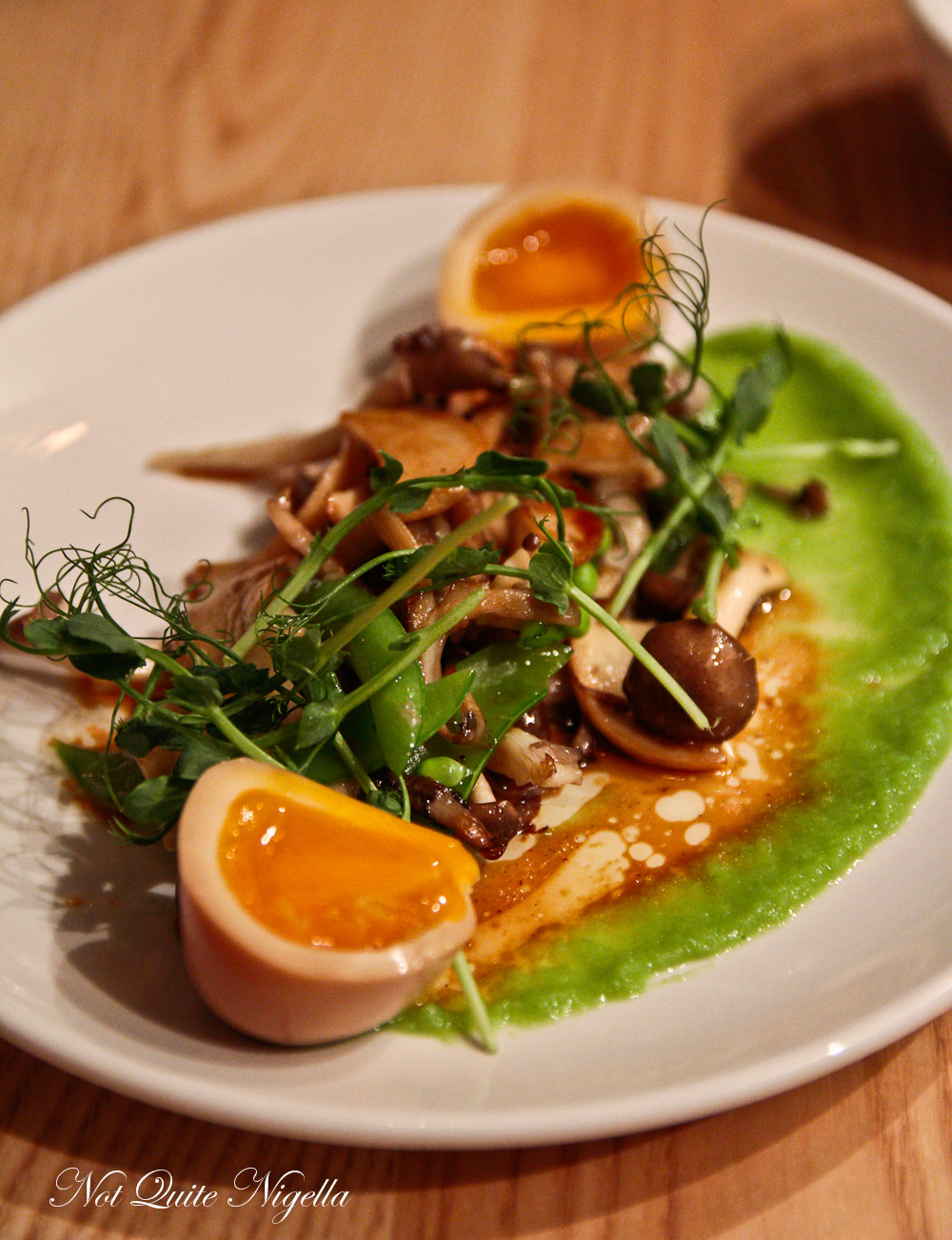 The wild mushrooms arrive with a yuzu dressing, a sugar snap pea puree and a halved 5 minute egg that has been peeeld and marinated in soy, mirin, garlic and ginger. We are to dip the mushrooms in the runny egg yolk. It's delicious but it's a little difficult to get the sugar snap puree and mushroom on the chopsticks and dip it into the yolk. 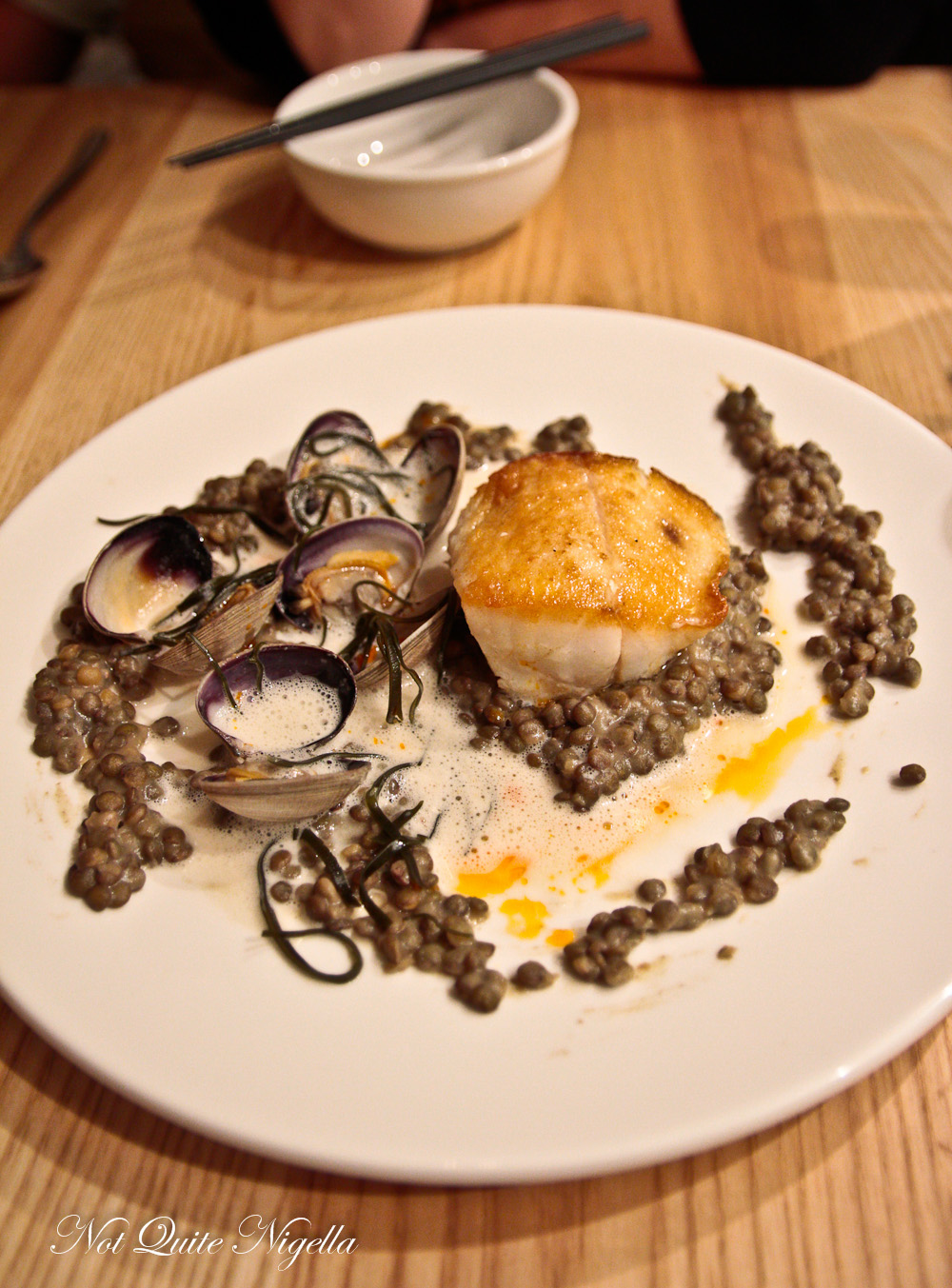 The smoked ling cod is smokey and served on a bed of Puy lentils with clams and a bacon dashi velouté foam and fine straws of kombu. I really loved the lentils but the fish's chewy texture is a little challenging for some. 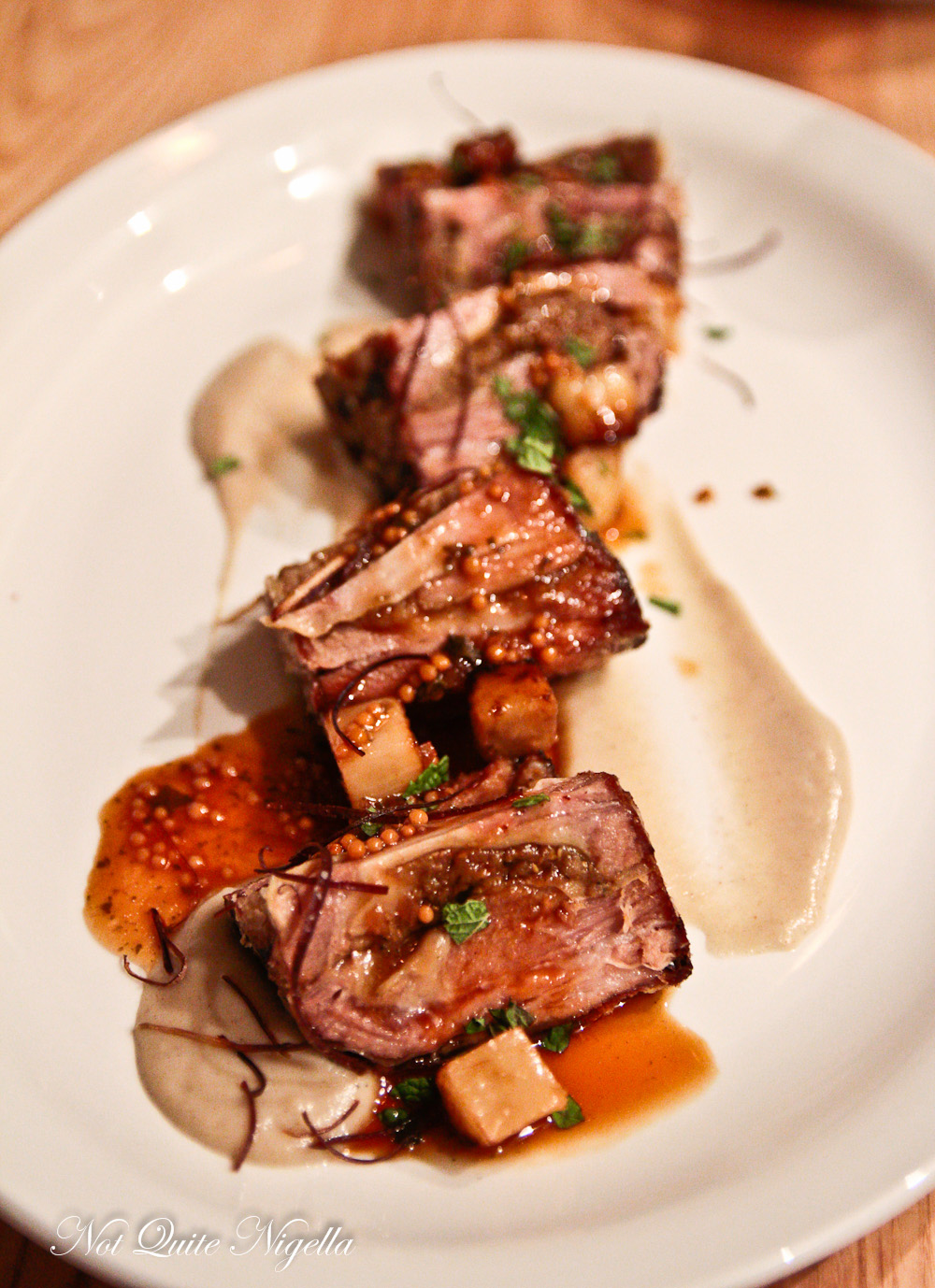 We saw plenty of the lamb belly go out to the tables - that's one of the fun things about sitting at the chef's table. The lamb belly is roasted and then rolled in cornflour and then pan fried to give it a crispy edge. It's a lamb belly version of porchetta as it is stuffed with herbs and rolled. It sits on a smoky eggplant puree and the soft meat is given a flavour burst with the eggplant mostarda. 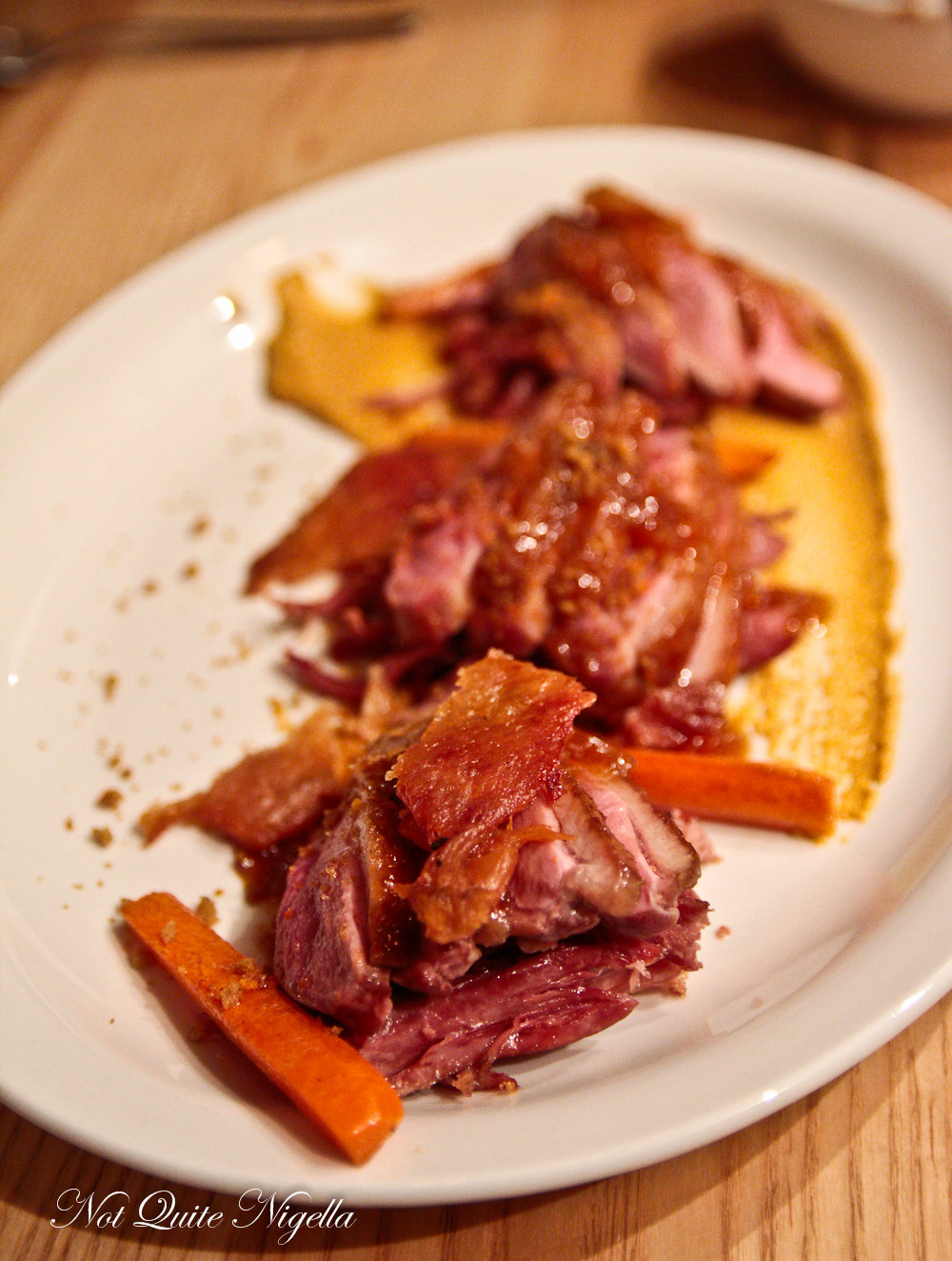 We see one table next to us who is not sharing their meals and instead they have a large plate of meat in front of them. The meals here are absolutely made to share and we watch as one woman takes to this entire dish by herself. It's a duck prepared three ways: with pink duck breast slices, duck confit and a crispy duck skin on top. This is served with a carrot cake puree which is literally carrot cake that has been pureed up into a creamy form and a house made marmalade. The sweetness of the marmalade goes well with the duck. 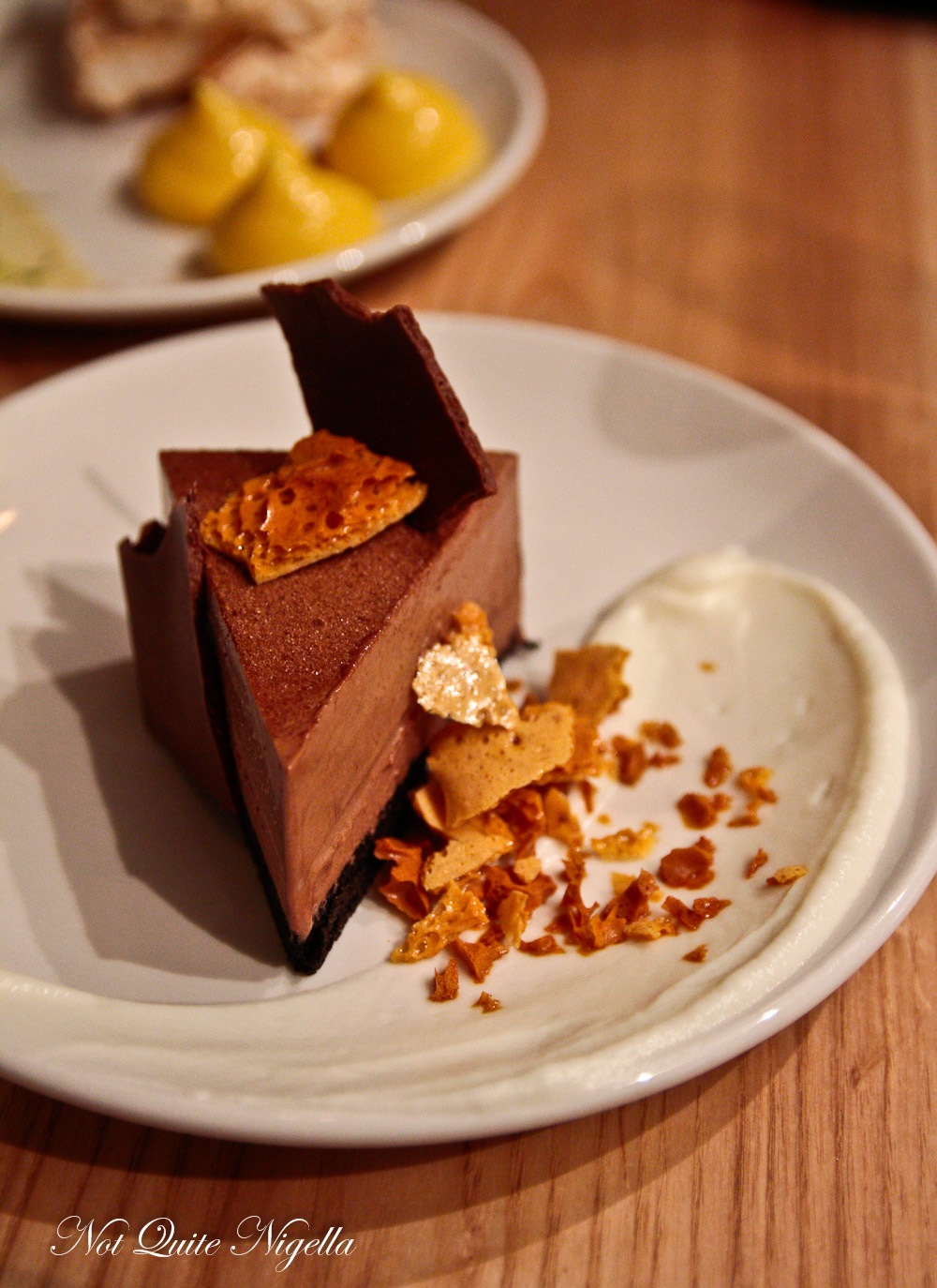 The dessert chef is Makoto's partner Amanda Cheng and her desserts are lovely and light. Even the milk chocolate Ovaltine mousse isn't overly sweet and it sits on a dark chocolate crumb base and is served with orange blossom yogurt and crunchy honeycomb as well as crunchy chocolate pieces. 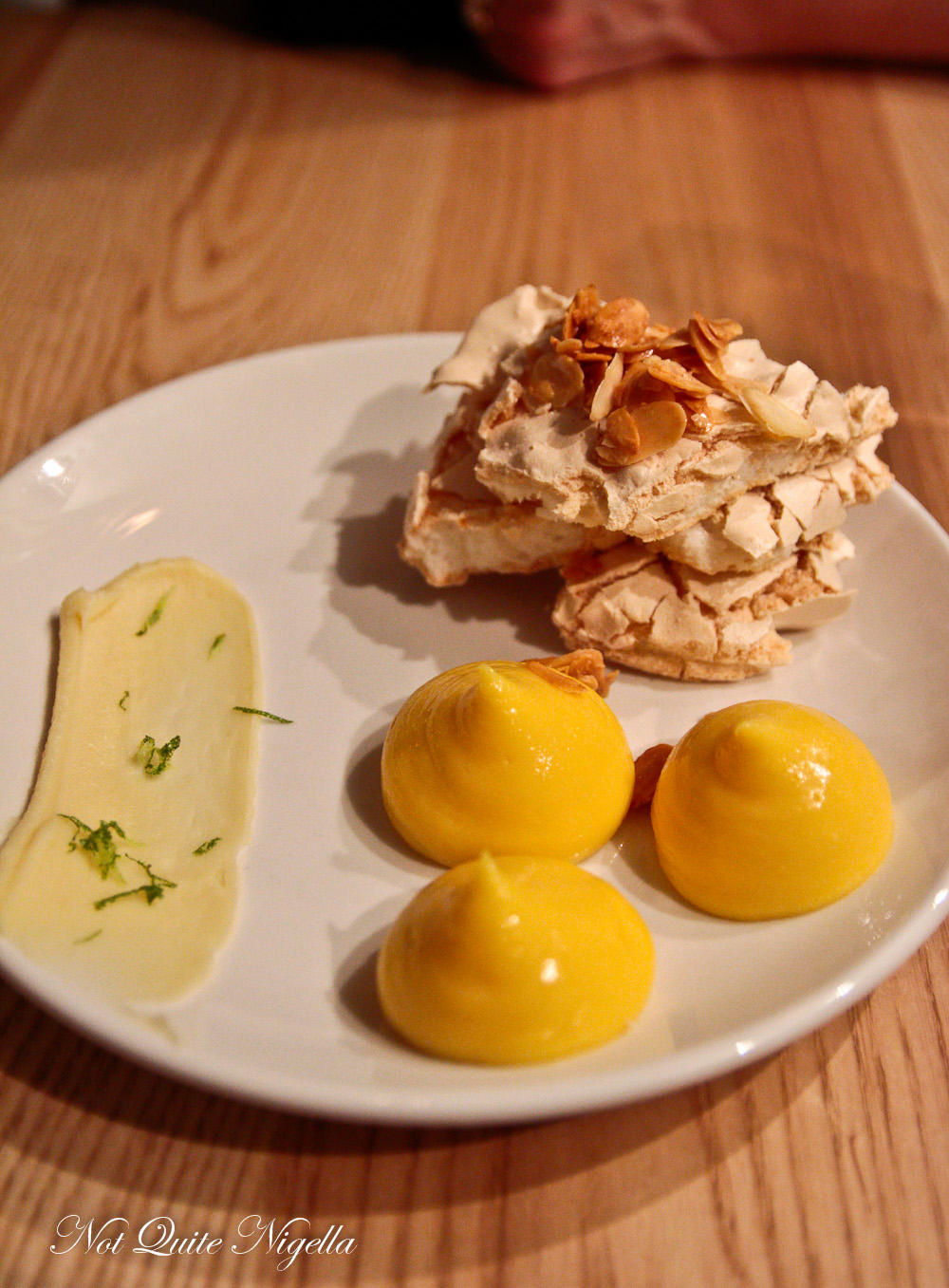 I couldn't decide which I liked better, the passionfruit curd dollops with the gorgeously chewy almond meringue with the slick of lime white chocolate or the other fruit dessert. This is all about balance and texture and despite fullness, one cannot help but go back for another spoonful...or three. 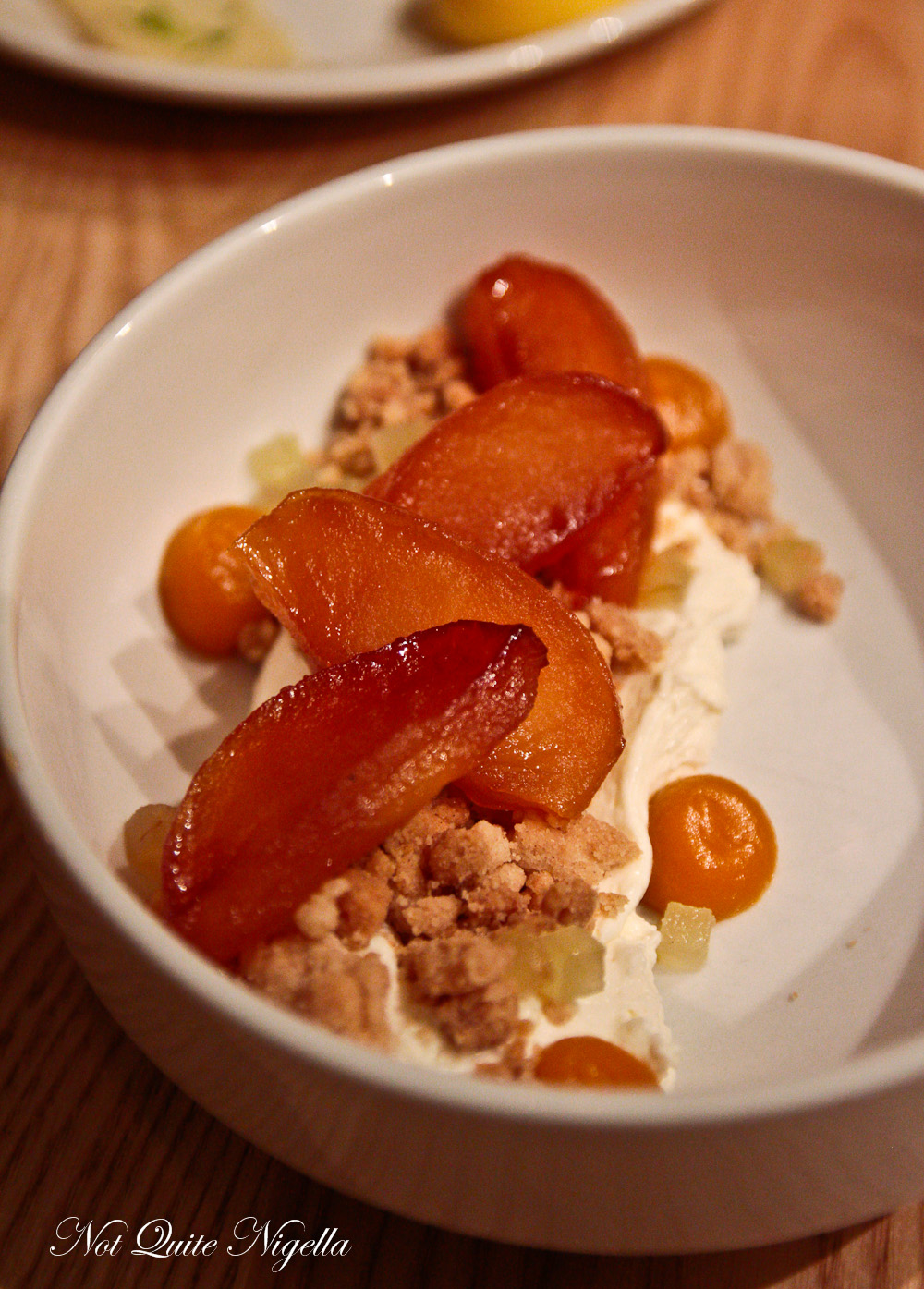 The caramelized and ginger apples look simple enough but they are a perfect balance of freshness with just enough creaminess. The cinnamon streusel is buttery and crunchy and plentiful while the kobacha squash drops provide a hit of sweetness. The mascarpone mousse gives the whole thing enough creaminess to tie it all together perfectly.

It's when I have my last spoonful that I realise with a measure of sadness that this will be my last meal in the city but I'm excited about my next stop also in Vancouver and you'll never guess where it is!

So tell me Dear Reader, do you have many food trucks in your city or near you? Have you tried them and do you have a favourite? And given the choice, would you rather sit at the chef's table or a regular table?

NQN visited Canada as a guest of the Canadian Tourism Commission 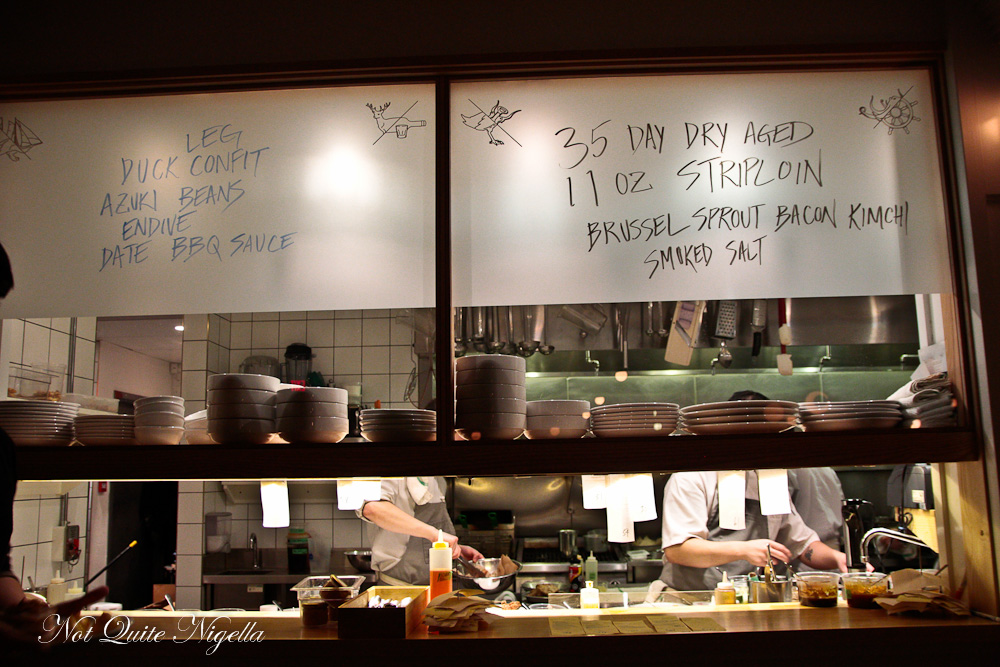