The Moon Festival in Guilin 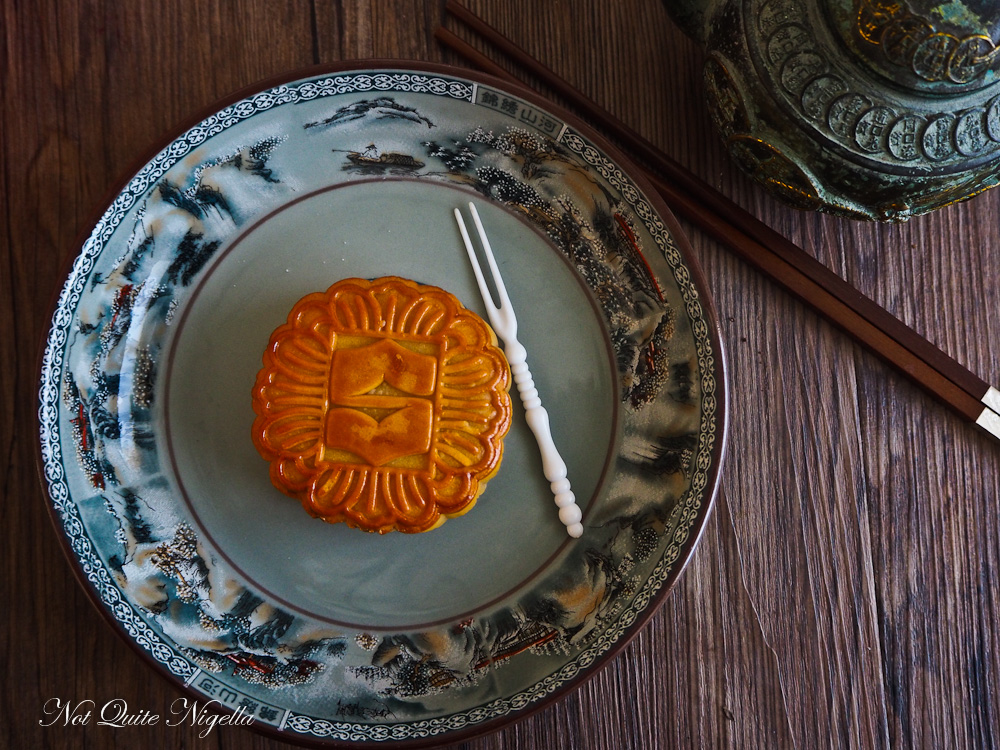 For Chinese people, there are several important times of the year. The Chinese Moon Festival or the Mid Autumn Festival is one of the most important on the Chinese calendar. Every year it is held on the same date on the Chinese lunar calender - the 15th of August. It is said to be when the Chinese ancestors found the moon to have shone the brightest during the year. 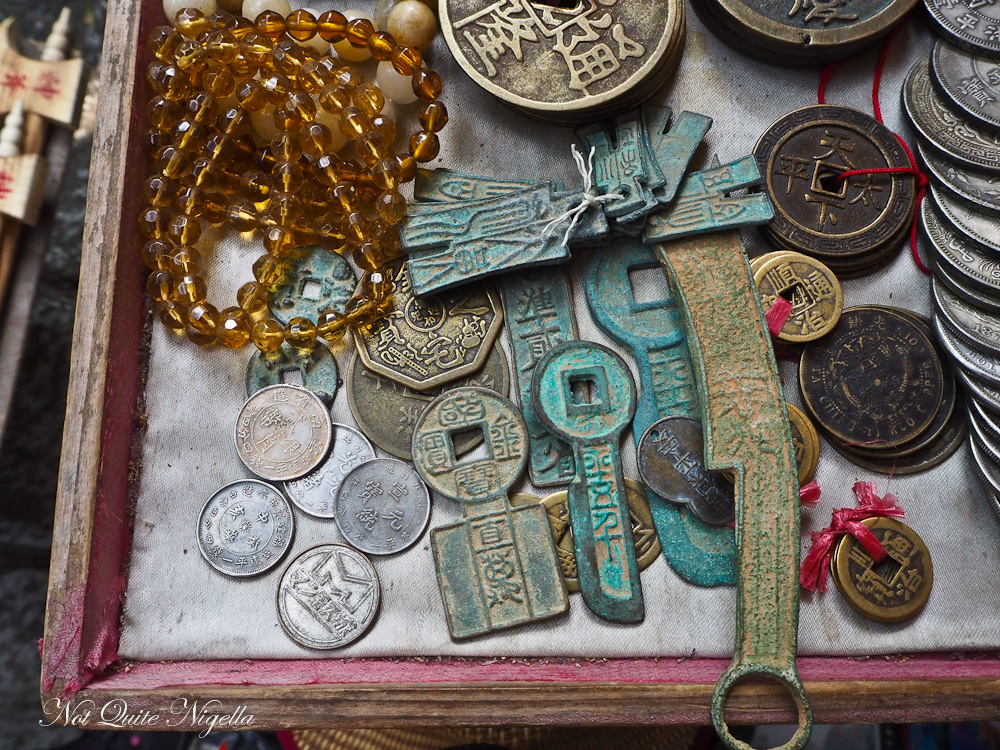 It is a time of movement as large numbers of people make their way back to their families. The moon festival originated in 2170BC and a quixotic legend says that it started when the most beautiful woman in the world who married the strongest man in the world. They were happy and wanted everlasting happiness and were given a herb to take for longevity but were warned that if only one person took the herb they would fly to heaven. 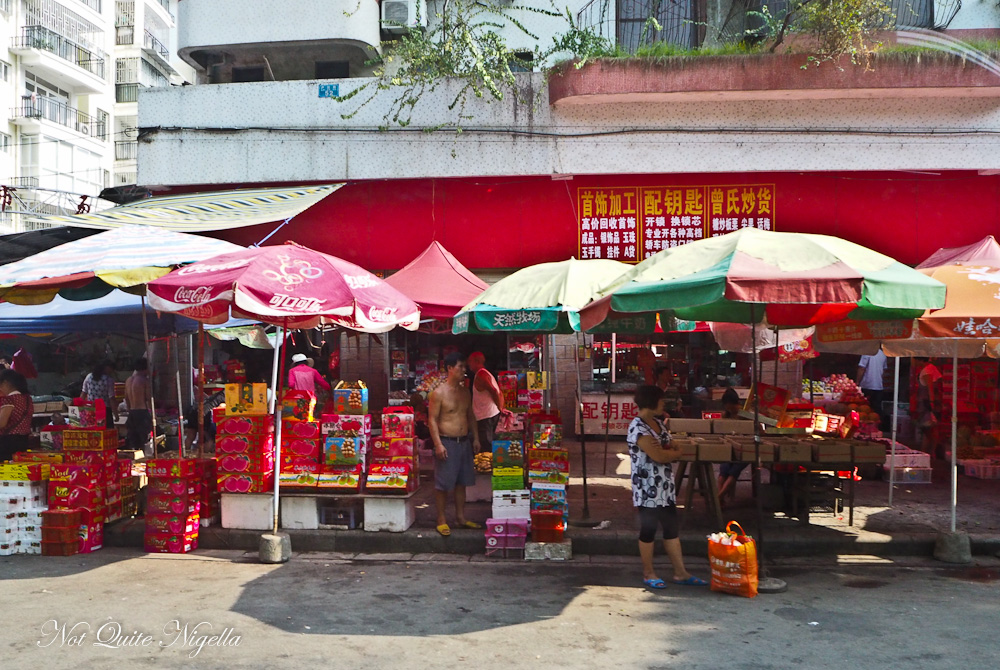 The woman stole the herbs and when she arrived in heaven she was banished to the moon to be by herself. There is a second legend related to the moon and that is of the woodchopper Wu Gang. Having displeased the gods he was banished to the moon where he was told that when he was able to cut down the osmanthus tree then he would be returned to earth. Every day the tree returned as the sun and moon appeared and he was in effect banished for life. As a result the osmanthus tree is regarded as a noble tree and osmanthus wine is drank as part of the moon festival celebrations. 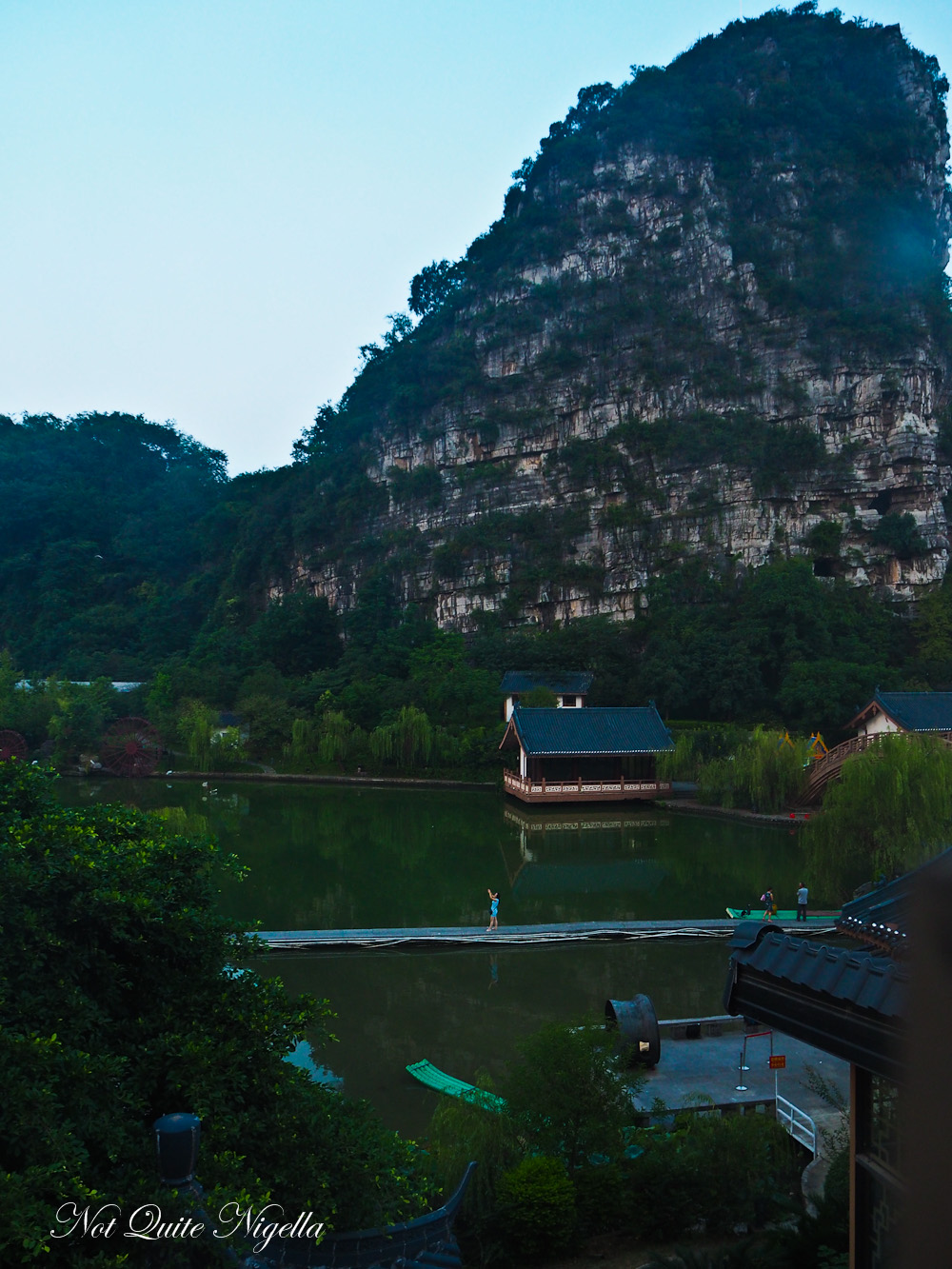 Others say that the origins of the Moon Festival are based on agricultural reasons as farming is traditionally related to the seasons. In spring they prayed for a food harvest and in Autumn they pray to thank them for the spring harvest. As a result, praying and thanksgiving and feasting with family became a part of the moon festival celebrations. 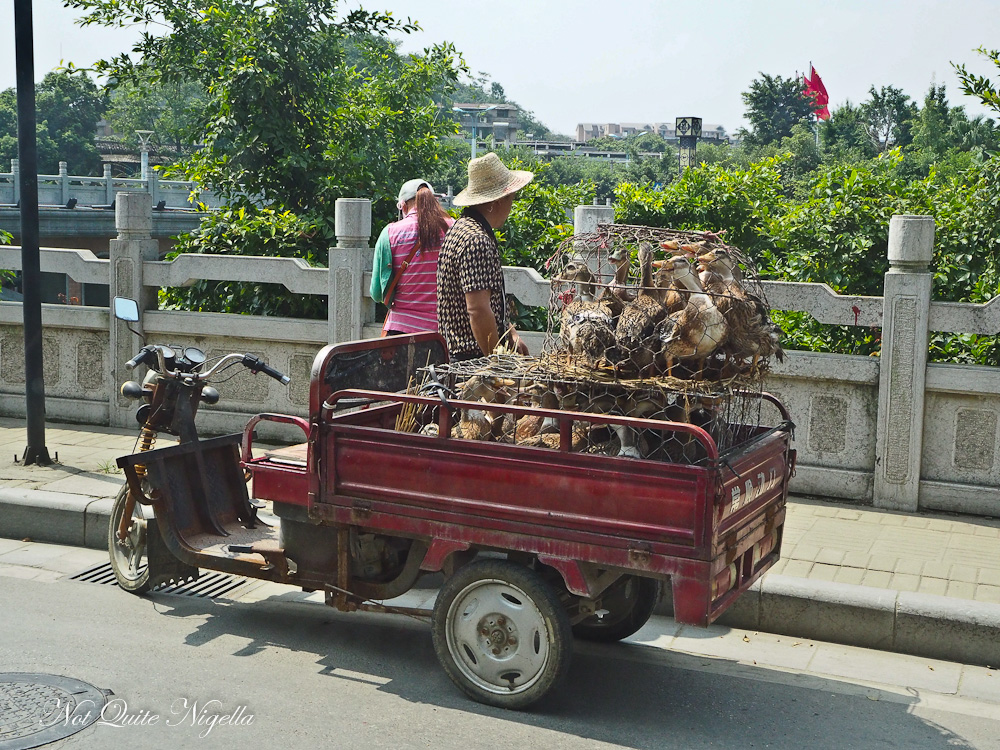 Along with reuniting with families, it is a time for romantic rendezvous and renewing friendships. The moon is considered auspicious because it is a round shape and the perfect circle with things coming together. Traditional moon cakes are usually round to represent the moon but modern versions are square. These moon cakes are sweet confections completely different to Western cakes. They have a sweet, thick filling and imprinted with fortunes like longevity, good fortune and prosperity. Fruit like pomelos are popular as they resemble the moon while food such as duck is popular as it is considered "Yin". Autumn and Winter seasons are considered "yin" while Spring and Summer are "yang." 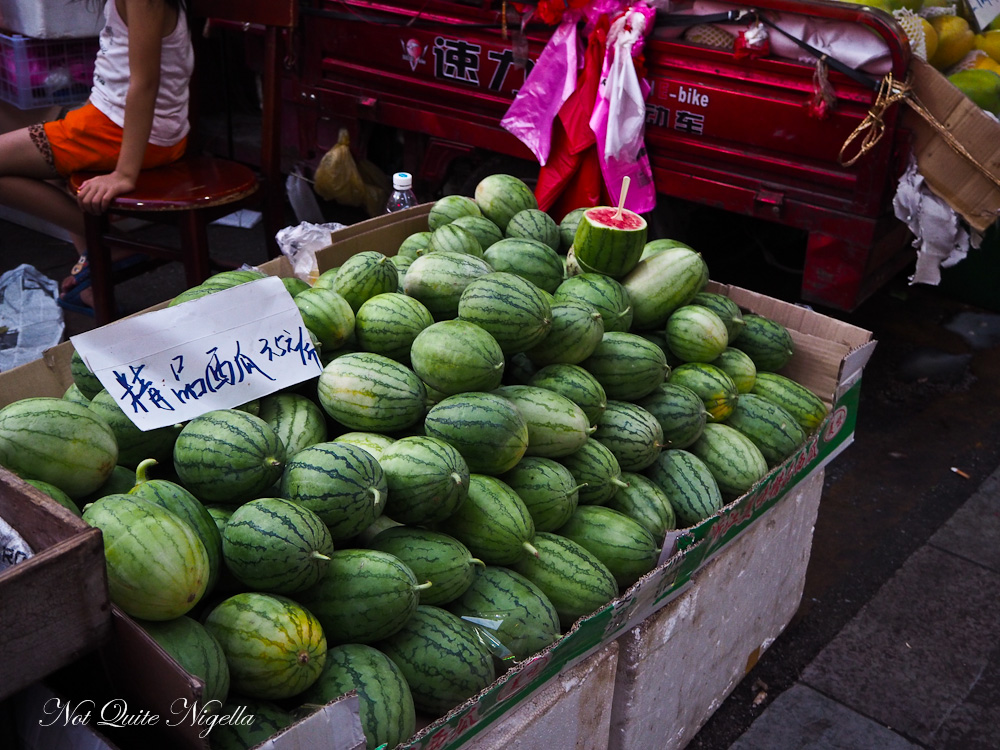 There's a sense of excitement in the colour and colour on the streets. The people of Guilin are busy on this much anticipated day and vendors are busy selling fresh fruit, plump mangosteen, green skinned mangoes, apples, watermelon and pomelos. They will eat this food and along with moon cakes together with family during moon viewing gatherings. 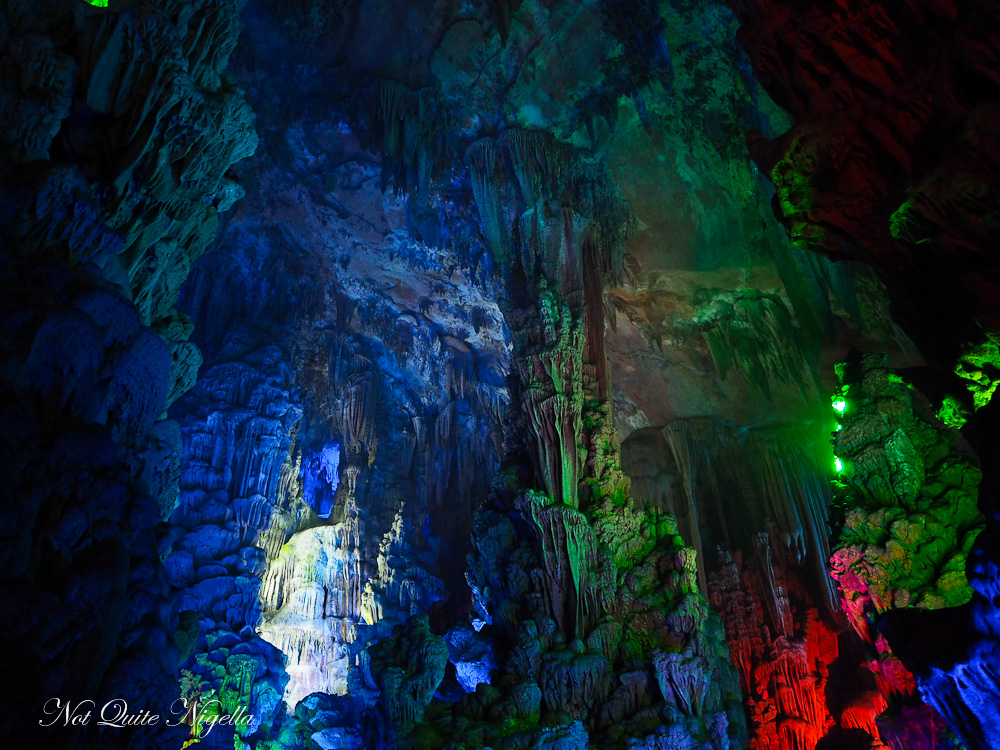 We start the day visiting the Reed Flute Caves with its magnificent stalactites and stalagmite formations. The caves and mountains were formed at two times, 300 million years ago and 100 million years ago when movements in the earth's crust and limestone produced these spectacular caves. They were only discovered in 1958 and opened to the public in 1962. 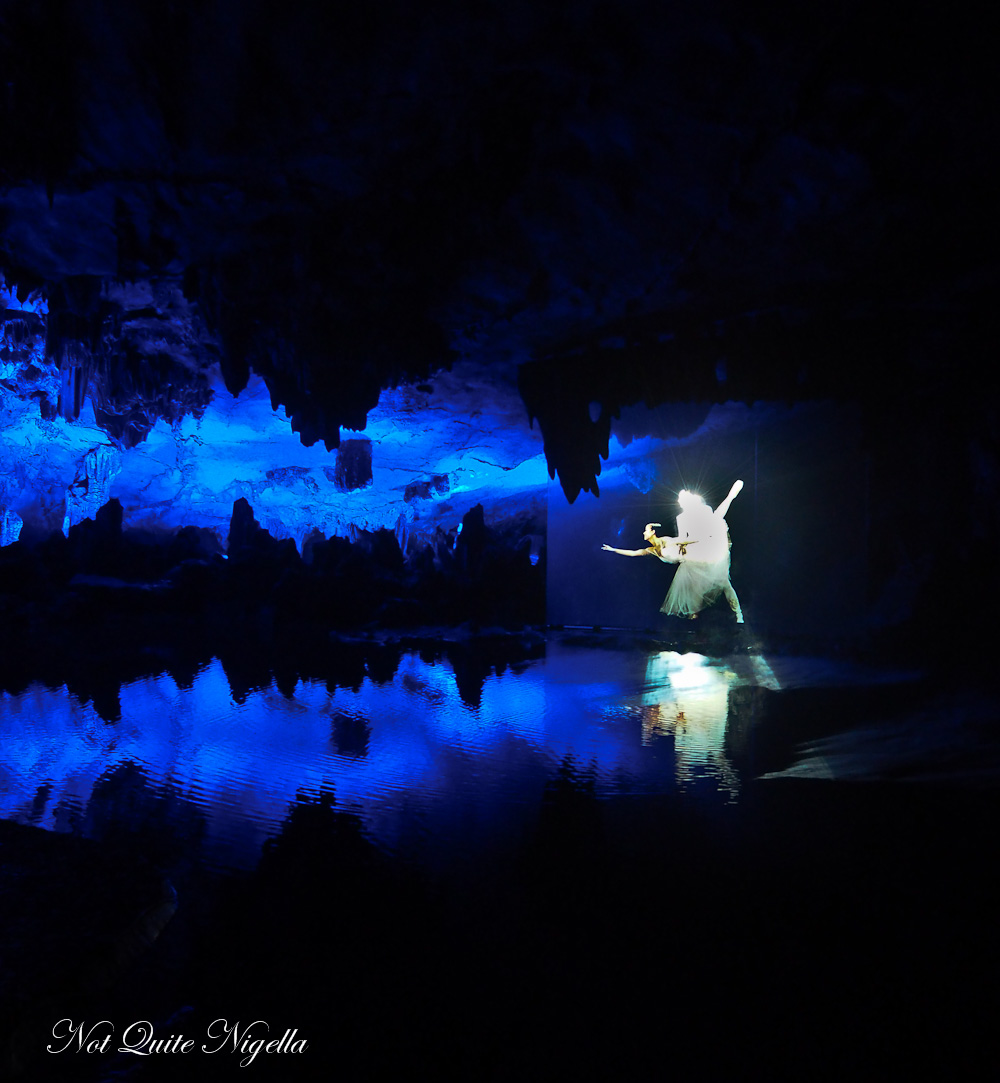 There are 3,000 caves in China. Wendy Wu guide Maggie points her torch at different formations - their namesakes become suddenly apparent once she names them. There is also a video showing how the caves were formed as well as a ballet piece projected onto the rocks. 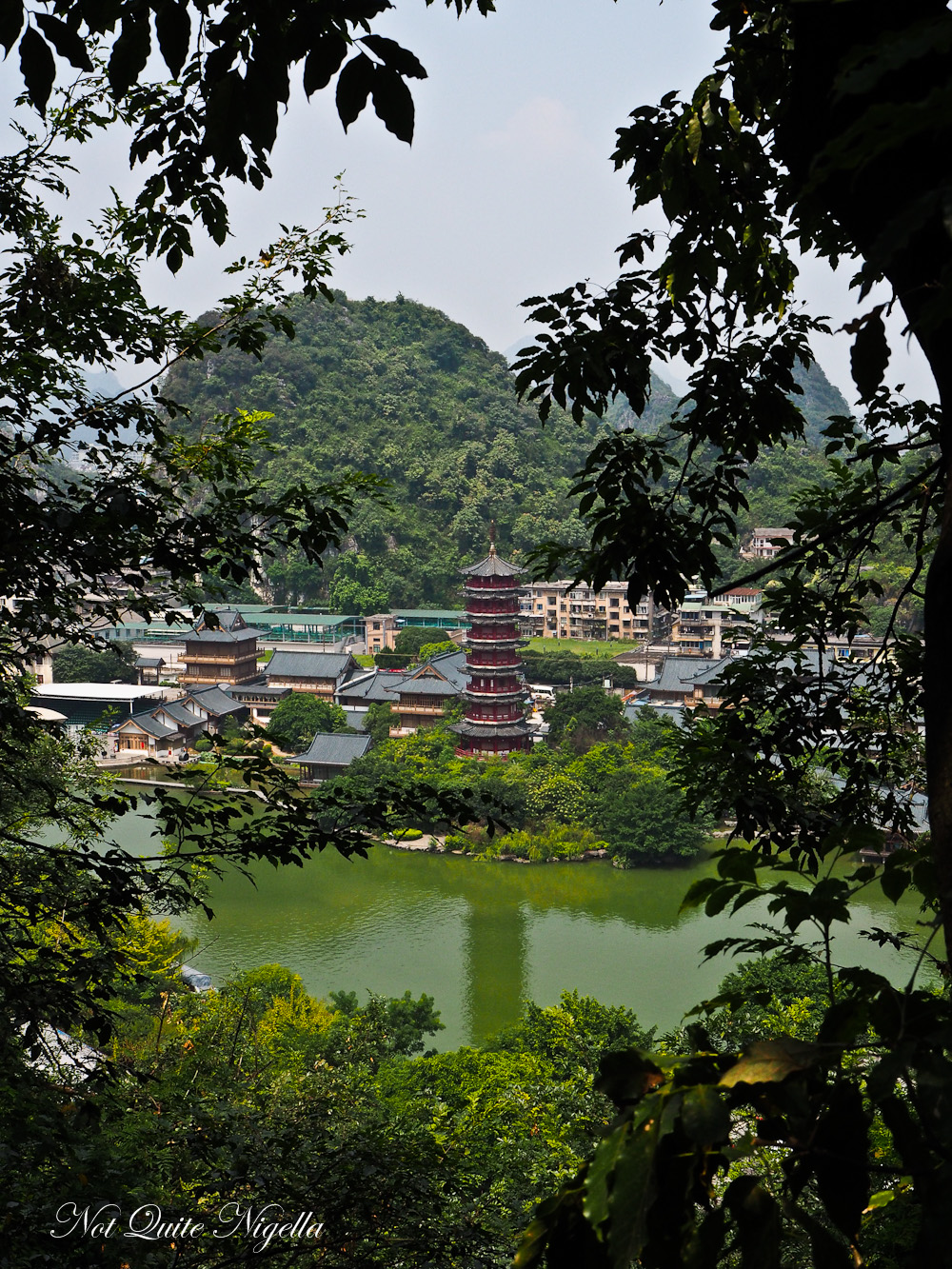 Nearby is Diecai Hill which is said to offer one of the best views of Guilin. We climb the 300 steps up the 70 or so metres. In the heat is is draining but there is a reward at the top for those that climb the mountain. It's a toboggan slide all the way down to the bottom. They give you gloves and a cloth tied around your bottom and legs to slide all the way down. 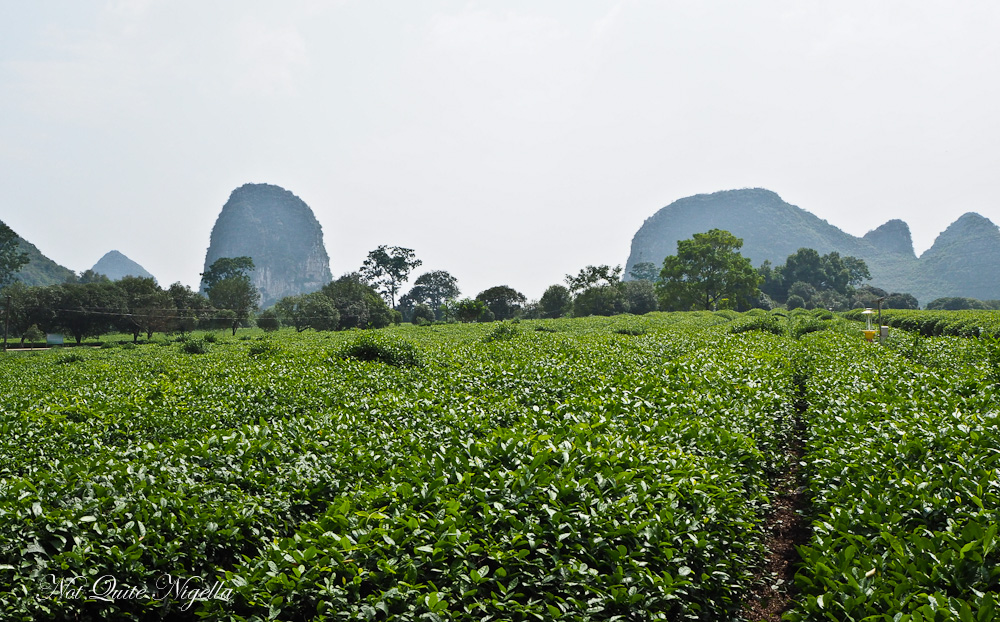 Our next stop is a tea plantation. "To drink a cup of tea in one sip you are said to drink like a water buffalo. To drink it in two you drink like a donkey but to drink it in three sips, you get to taste the real tea," says 36 year old Guilin tea master Nico.

We are at the Guilin Tea Research Institute. Here they grow tea for research and for sale and it is the only location in the world that grows and sells yellow mountain tea. 90% of the yellow mountain tea is given to the Chinese government to be given out as gifts for state visitors and VIPs while 10% is sold here. 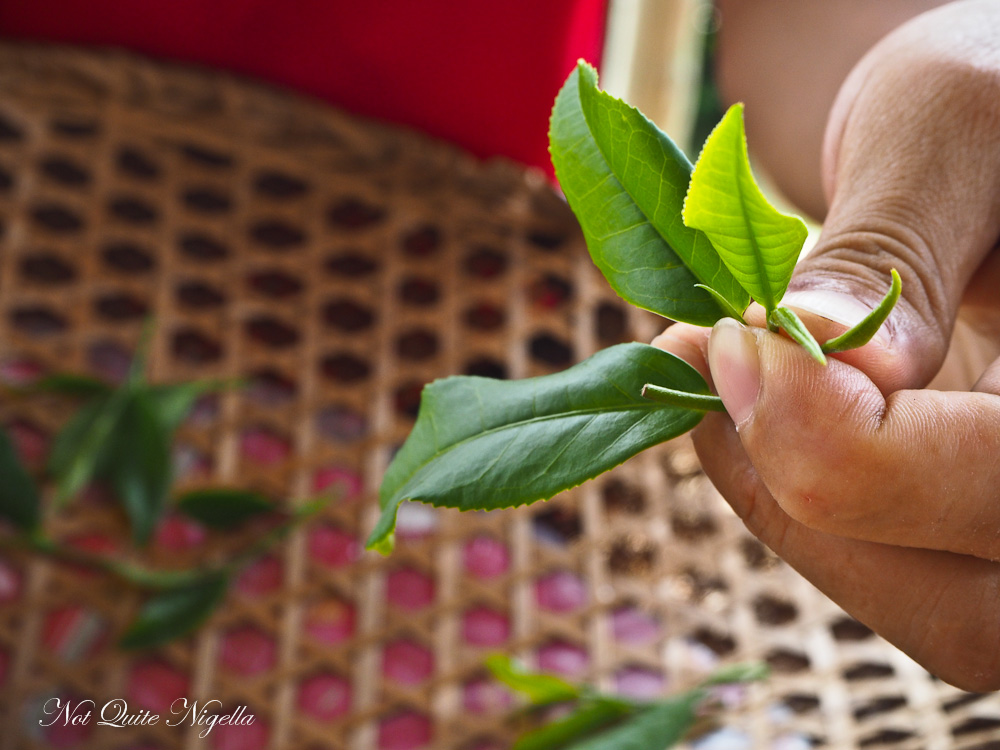 We start our tea plantation tours donning hats and looking out to the tea fields that sit in the base of the Yao Mountain. The ground is made up of a yellow soil base on rocks that have eroded into the ground and the pure mountain spring water is said to contribute to the high quality of the tea here.

Tea is harvested in Spring, Summer and Autumn but never in Winter and each year they produce 42 tonnes of tea. At this plantation 95% of the tea pickers are women as they are said to possess the necessary patience for the task. There are 250 types tea bushes here and each is hand picked. 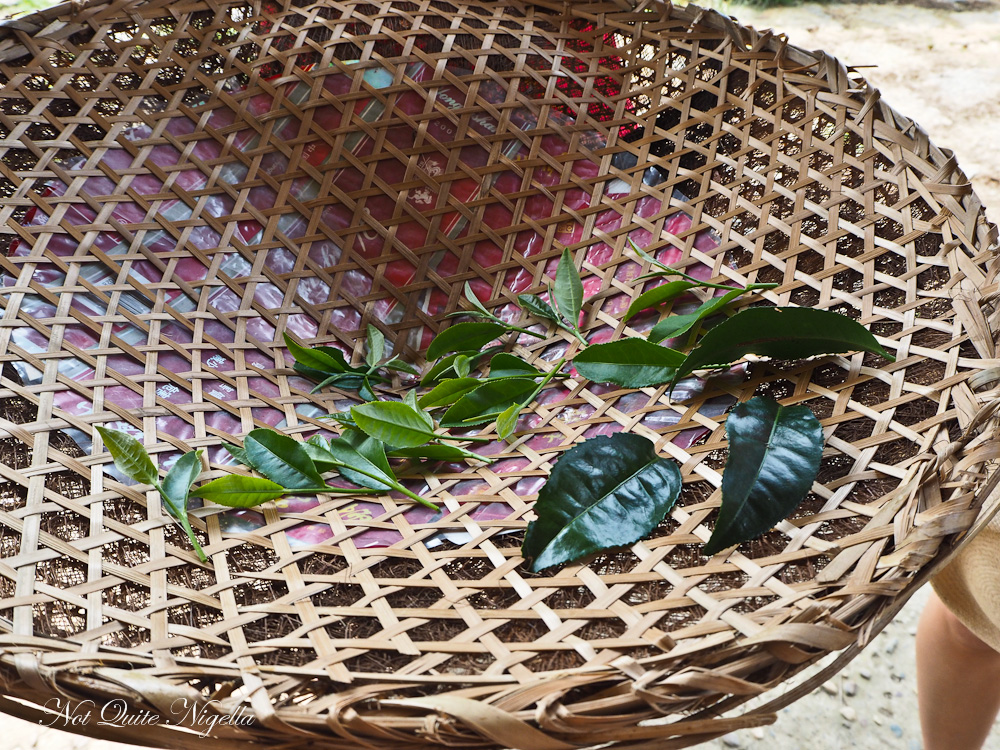 Tea is also used medicinally. According to Chinese custom, green tea is "ying" and therefore better for hot days when you want to cool down. Black tea is "yang" and better for cold days while fermented oolong tea is said to be a mixture of both. 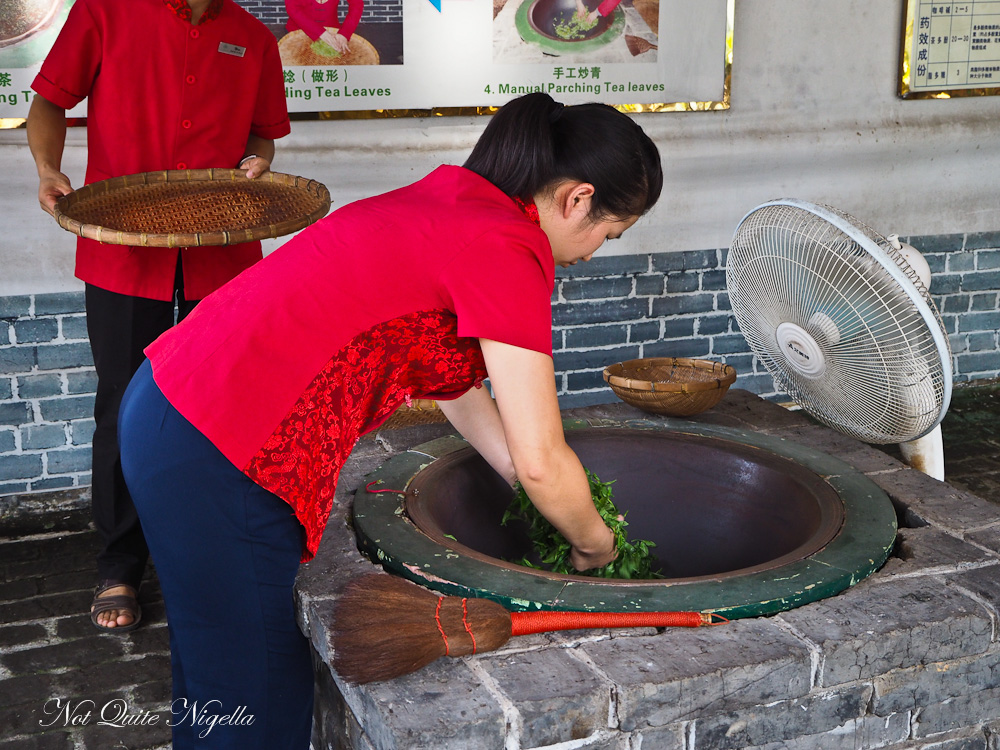 We watch green tea being roasted by bare hands. They take the picked leaves and toast it all over using bare hands over a 250°C/482°F heat. Although dangerous given the high heat, bare hands allow them to feel when the leaves are ready. They are then kneaded and then shaped. 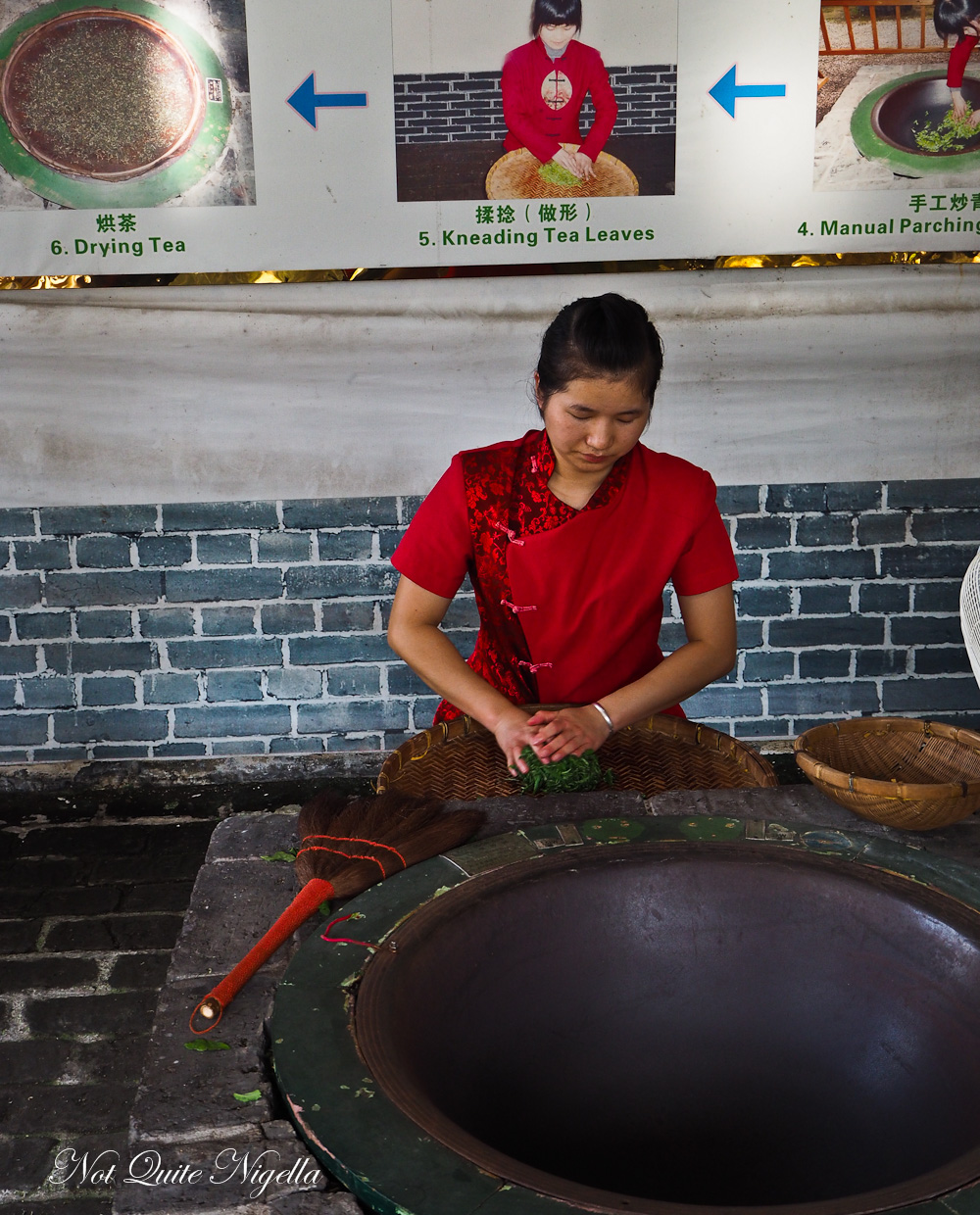 We adjourn upstairs for the tea ceremony. Nico explains the different temperatures at which tea should be made. Compressed and oolong tea can be mad easing boiling water but white tea should be made with 70°C/158°F water and green tea with 80°C/176°F. He shows us the various implements used in a tea ceremony. Clay tea pots are ideal because they absorb the flavour of the tea and after 3-4 years use, simply adding water to the pot will result in a tea flavour. Porcelain however is practical and is good for keeping heat in. 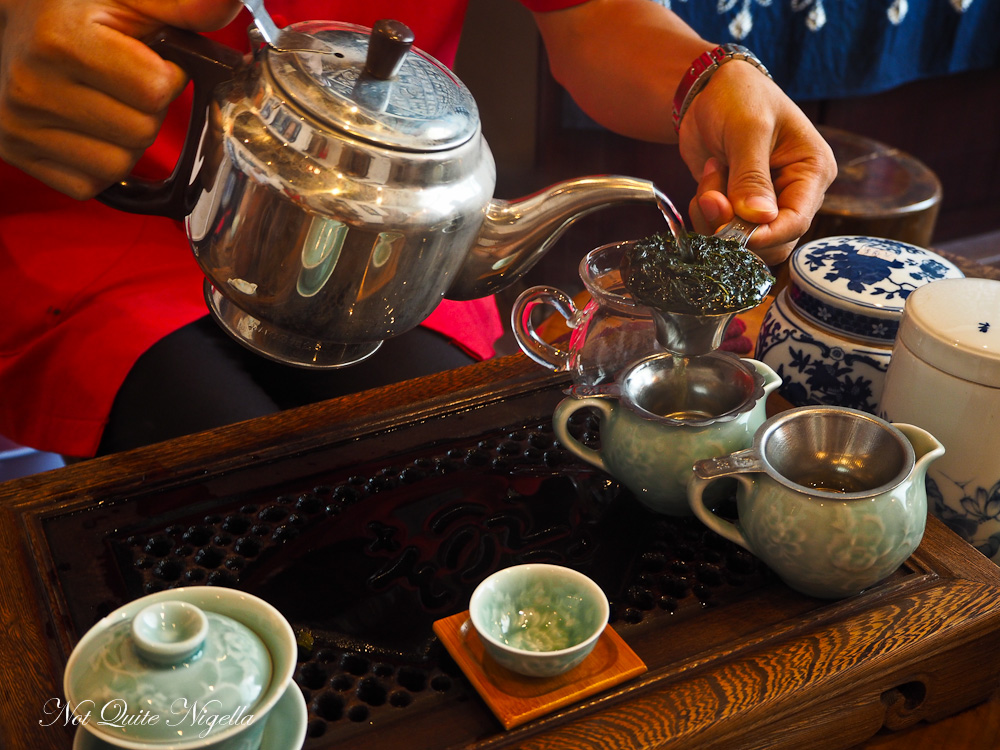 We are trying four different tea today: an oolong tea, high mountain yellow tea, green tea and the most expensive tea, a compressed "six treasures" tea. He brews tea in the clay teapots while he makes others in the porcelain. I'm intrigued by the yellow mountain tea with its distinct yellow colour and sweet taste that accounts for 8% of the total tea harvest. This special tea is said to be good for liver, kidneys, insomnia and headaches. The six treasures tea is very pronounced in sweetness and complexity, a result of the six tea types that it contains. 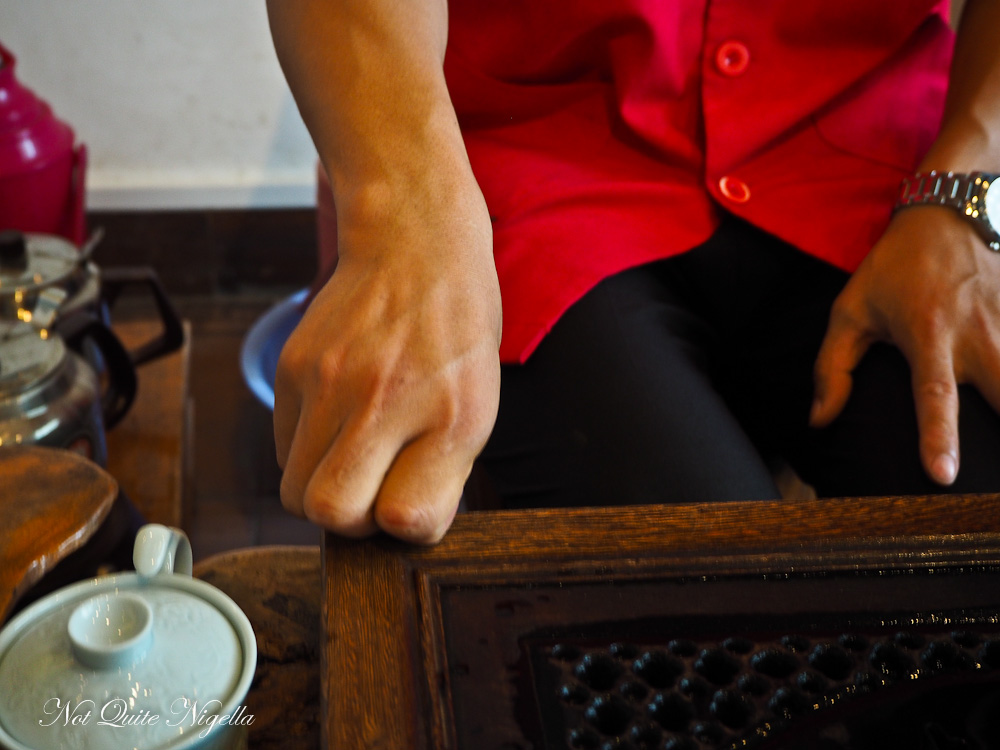 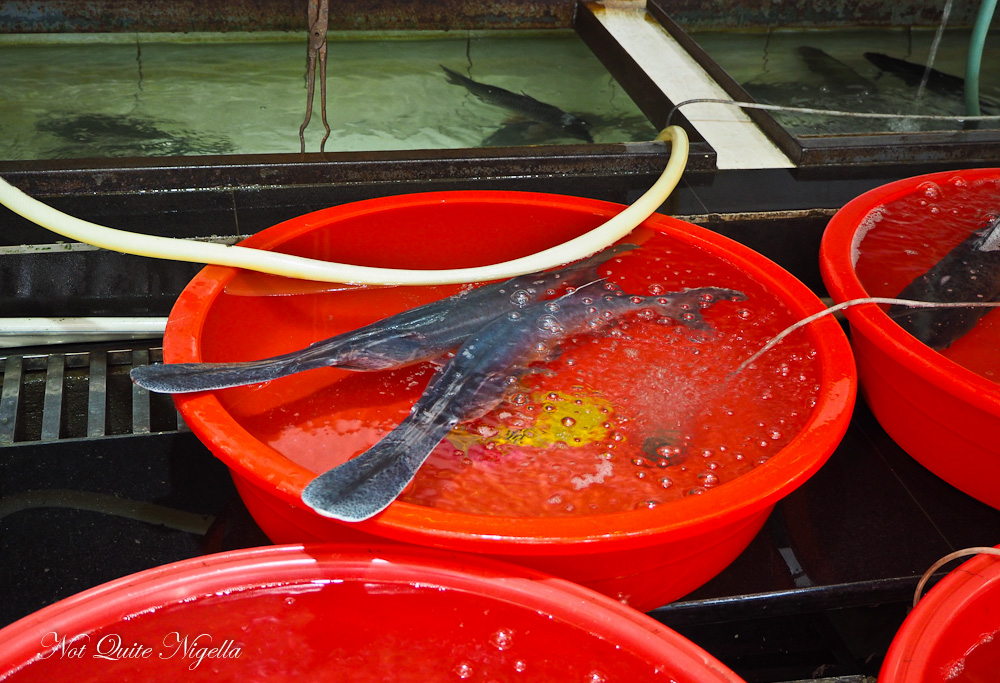 We make our way to He Pan Mei Shing Fan for our Moon Festival meal. There are already customers gathered outside to pick the fish that they want. Many of the fish are from the Li River and include an intriguing Duck Nose fish whose nose resembles a platypus or a ski. There is also tortoise and bamboo pig, the latter a small rodent that resembles a hamster or guinea pig so named as it feeds on bamboo. 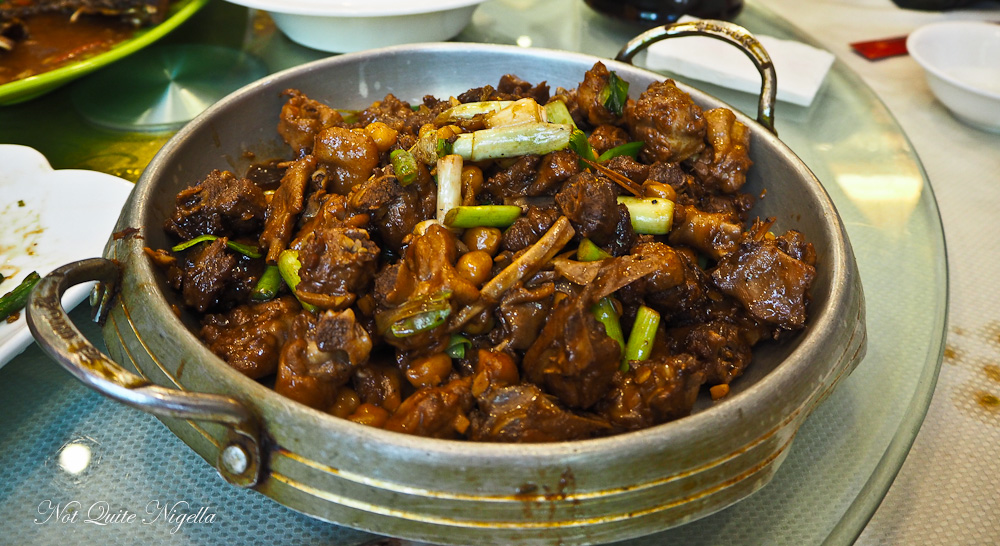 As it is the Moon Festival, we have to try duck as that is customary and here is served as beer duck. The bone-in pieces of duck are chopped into bite sized pieces and cooked with shallots, garlic and a beer sauce. Whilst it doesn't taste of beer it's delicious the flavour soaking into each piece. 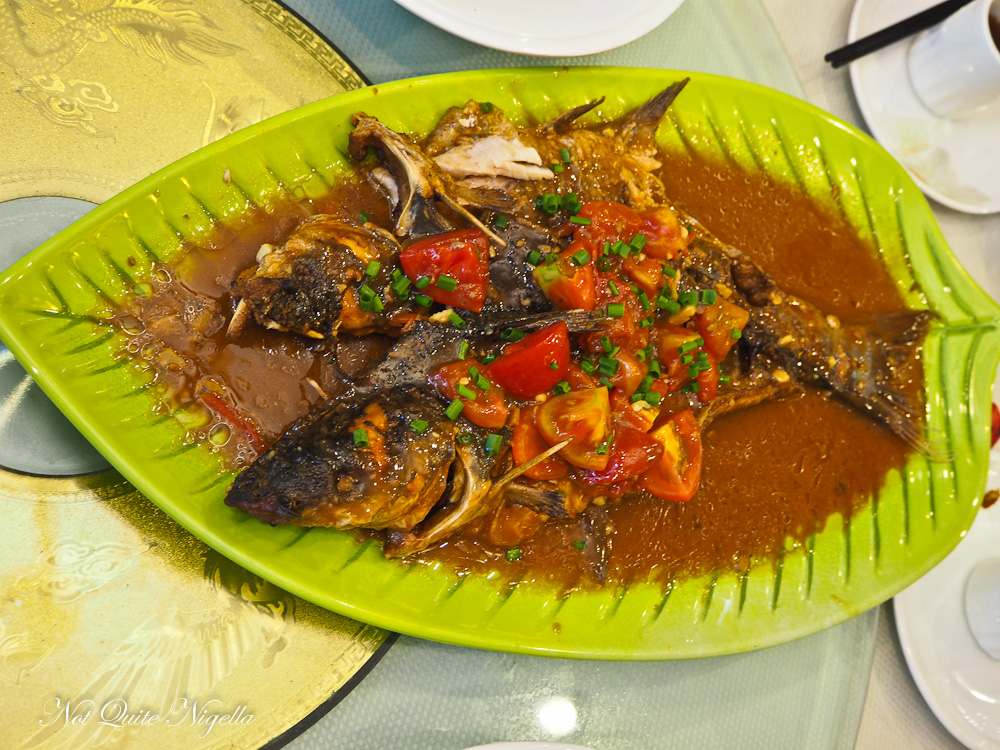 Another famous dish in the area is Beer Fish. This is a slightly different dish from the duck as there is a lot of sauce. They have chosen a fish without too many bones for us and pair it with tomatoes and an abundance of chilli. The beer fish sauce is ambrosial and one I've made it at home many times. 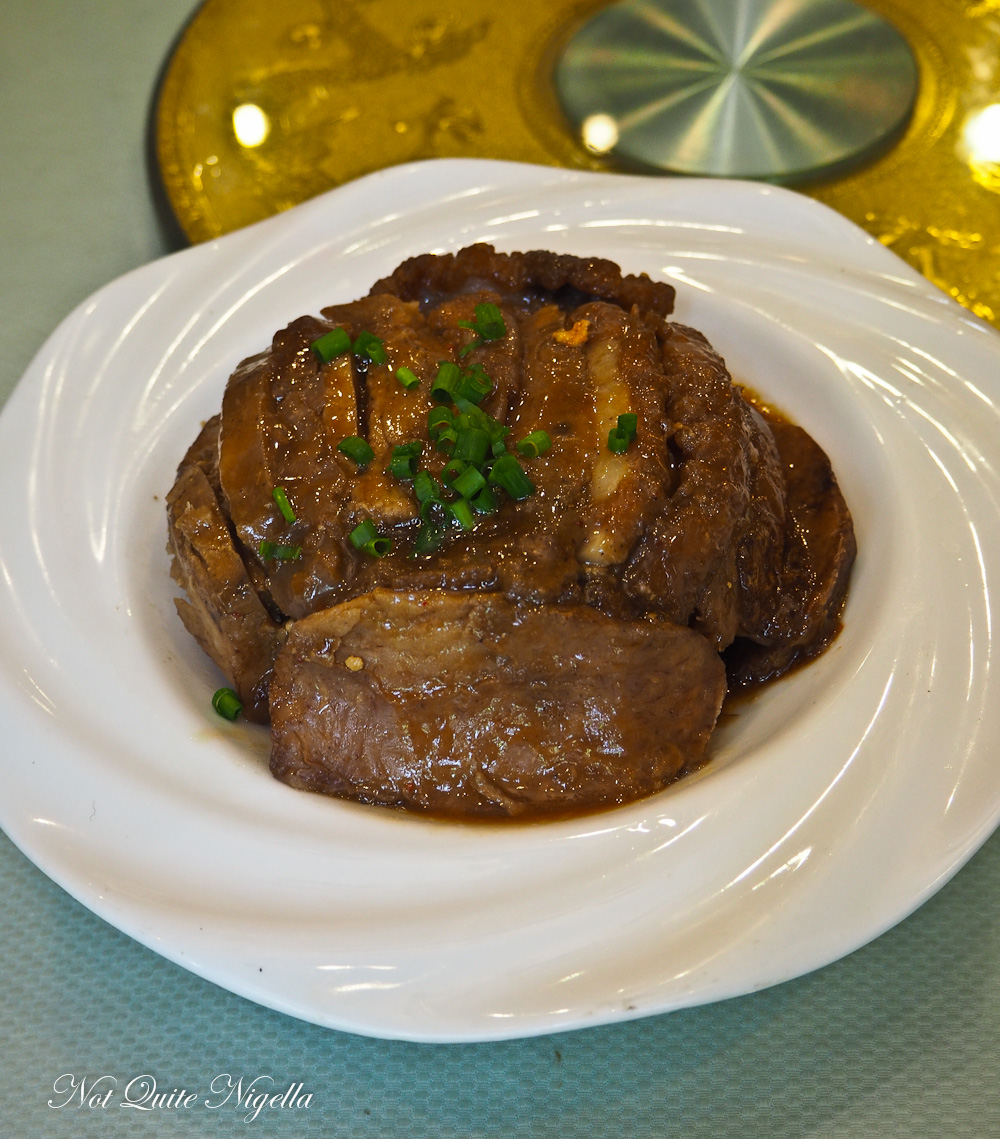 We also try more Lipu county "looped meat" taro with pork belly but served in a different way to the one we ate the night before. There is a slice of pure pork belly fat alternating with a slice of taro in a sweet soy based sauce. It reminds me of the filling of zongzi rice dumplings and although my fellow travellers are less smitten with the pork fat, I find it absolutely delicious. The taro itself has so much flavour and is better than other taro that can often suck the moisture from your mouth. 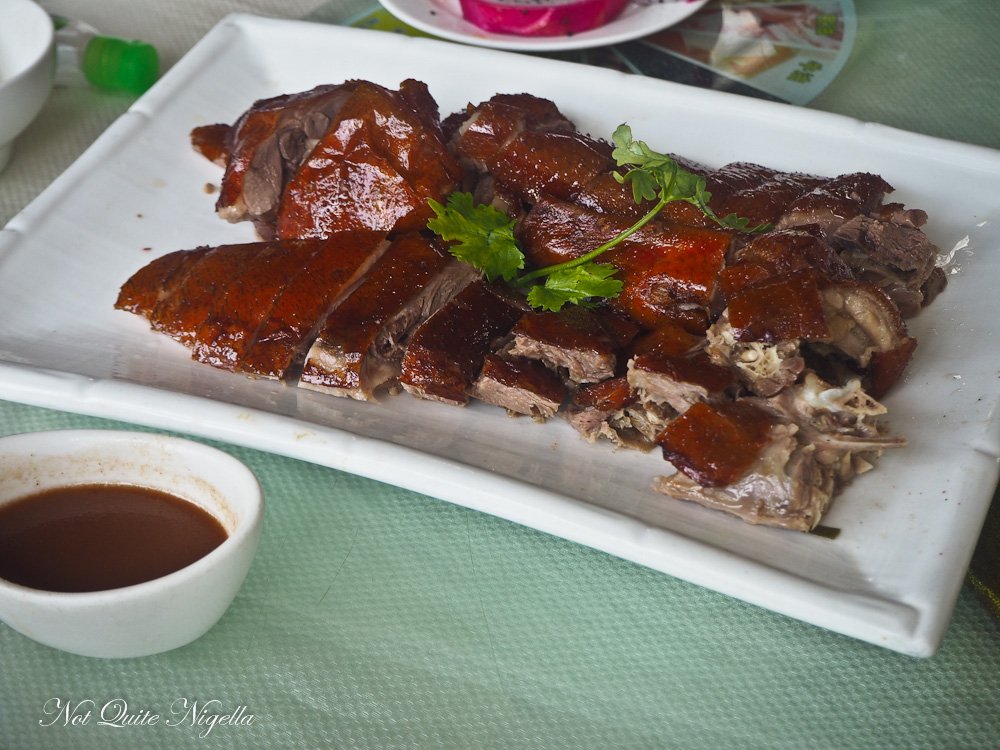 Although duck is popular at Moon Festival, we also try one of Guilin's restaurants that specialises in roast goose. Chunji Roasted Goose restaurant is a large restaurant where we watch large tables of people toast each other with glasses of wine. Some light up cigarettes while at the table - smoking in restaurants is permitted in China. 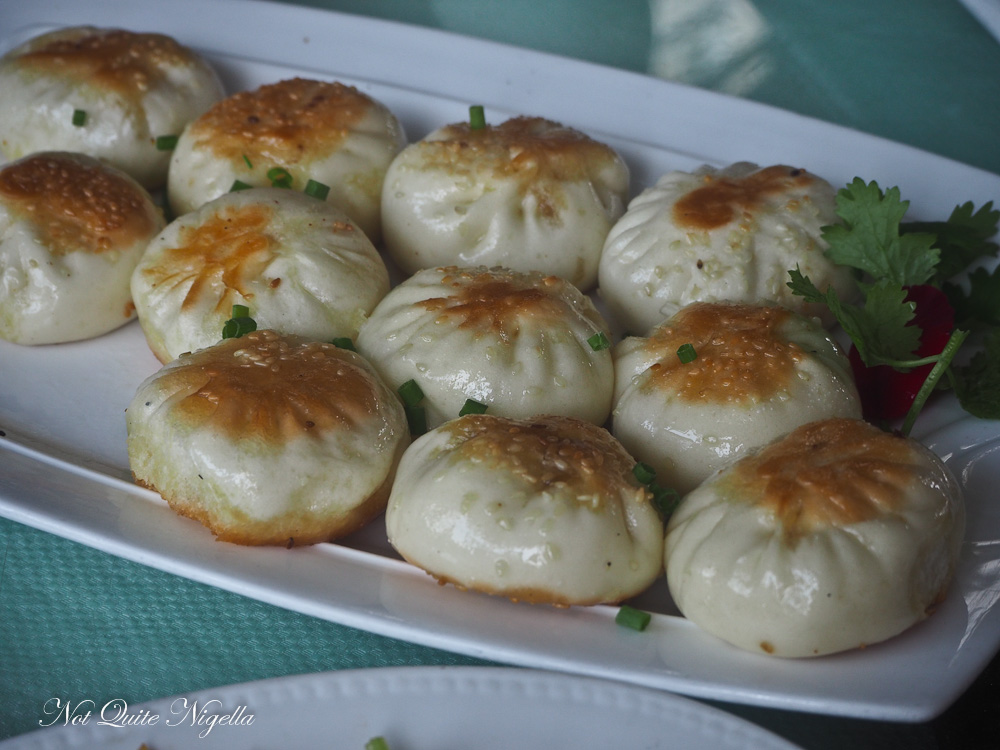 So what is the difference between roast goose and duck? I find that goose meat is stronger in flavour with more dark meat. The roast goose at Chunji Roasted Goose restaurant straddles a balance between crispy, sweet and savoury and is utterly delectable - easily one of the best roast goose I've eaten. 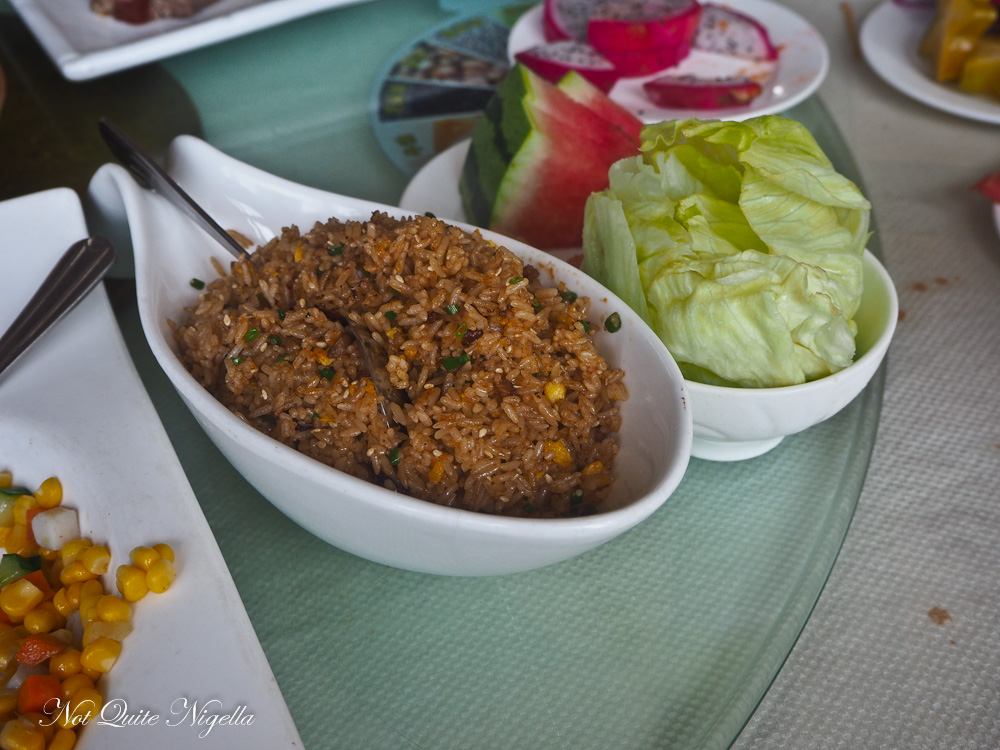 They also serve the goose in pan fried dumplings, the meat shredded in the sweet milk bun outer. The goose fried rice has small pieces of goose in it and comes with a lettuce leaf cup which adds a freshness to the slightly sweet rice. There is also goose liver and intestines on the menu if you are so inclined. 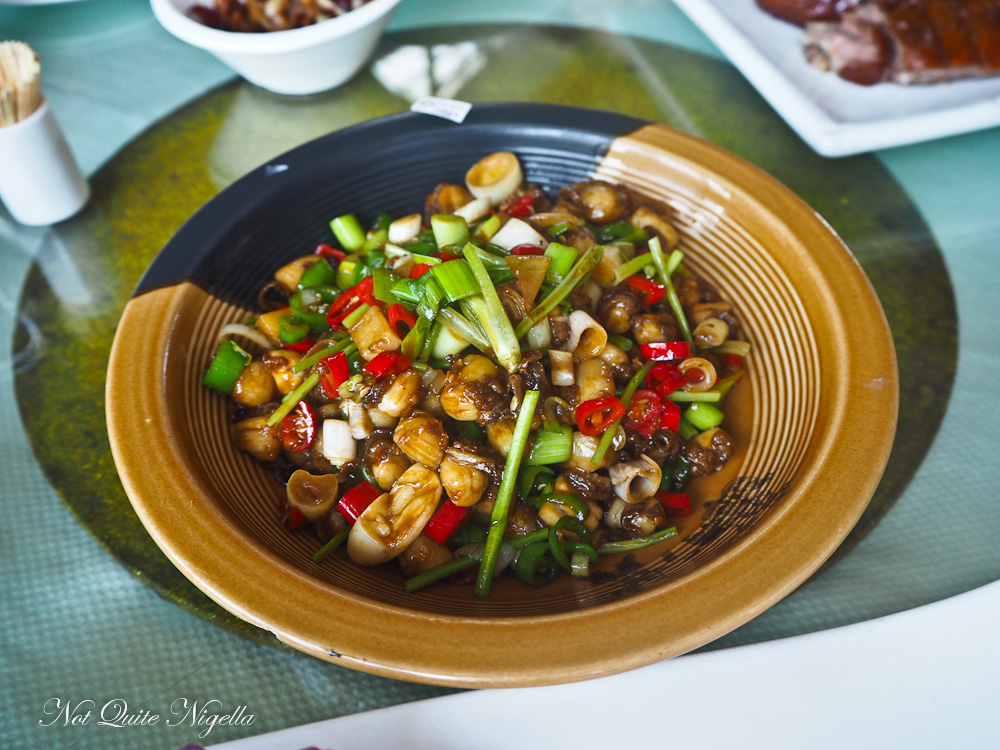 River snails are a Guilin specialty and here they are served outside of the shell, resembling tiny scallops. They are fried with a mix of red and green chillies as well as plenty of coriander. The result is a sweet and hot mixture of plump snails, herbs and chillies. 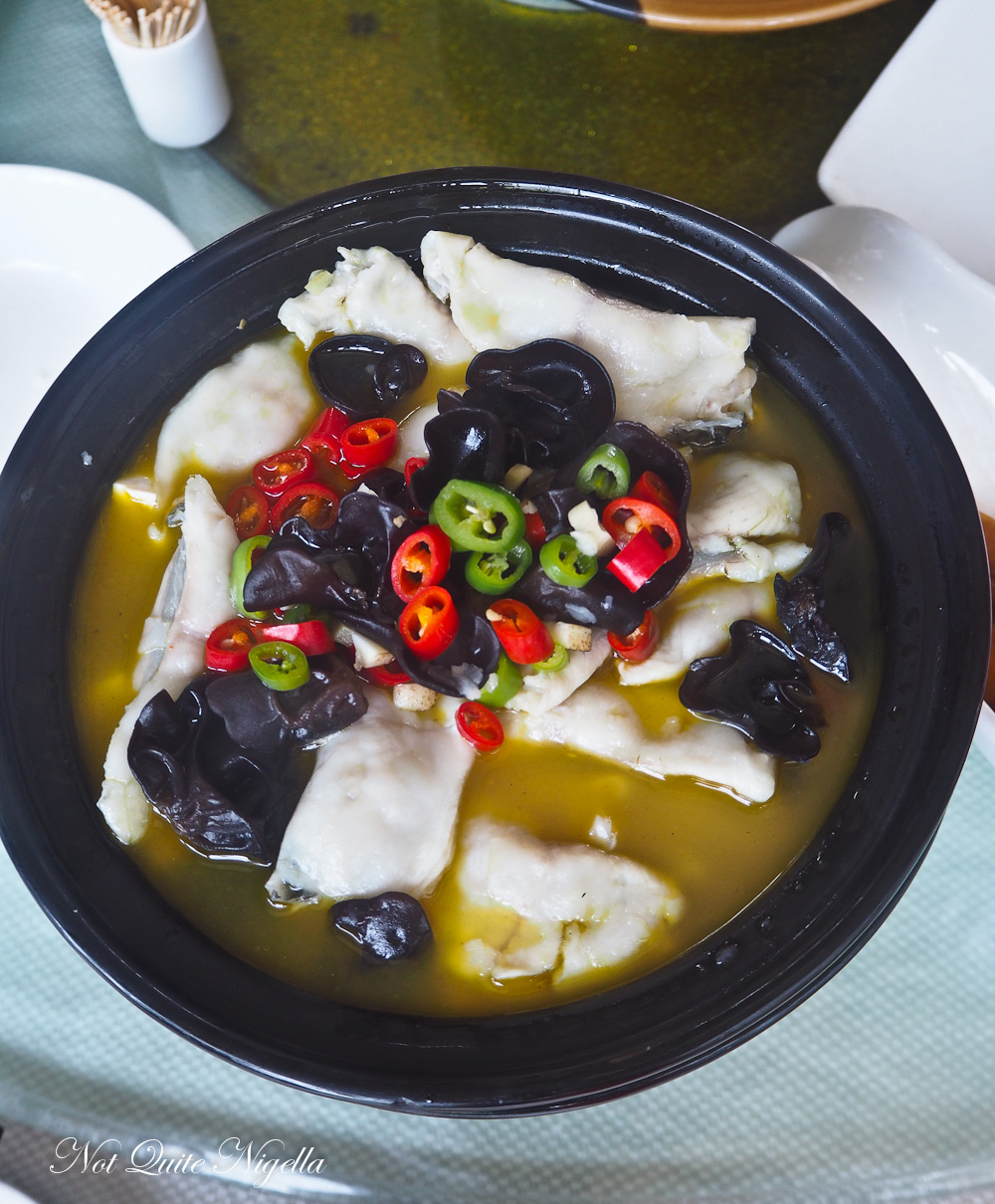 One of the favourite dishes is the fish dumplings, paper thin cases enclosing tender fish fillets with wood ear mushrooms and chillies. As promised, the soup is slightly sour and flavoursome.

One of the features of this restaurant is the complimentary fruit that you can help yourself to. Dessert isn't a huge item in Chinese cuisine and they often finish meals with dragon fruit, papaya and watermelon. 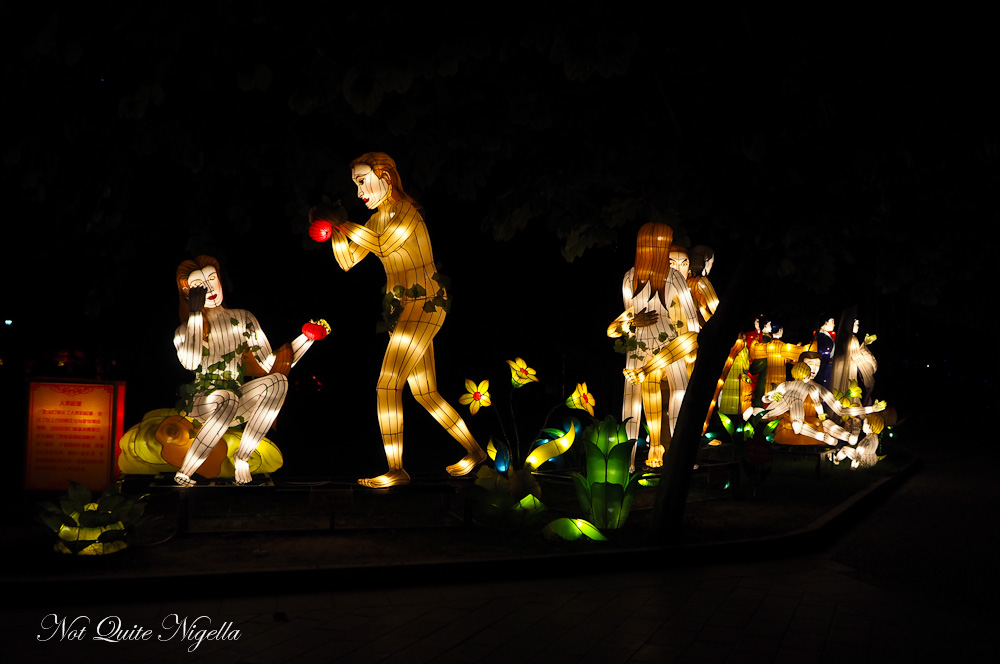 That evening of the Mid Autumn festival crowds gather to Xiangbishan Park to view a colourful lit display of lovers. Couples of almost every iteration and contortion intertwine limbs and touch lips. There is a display of Adam and Eve and a traditional couple on their wedding night with the groom lifting the bride's veil. 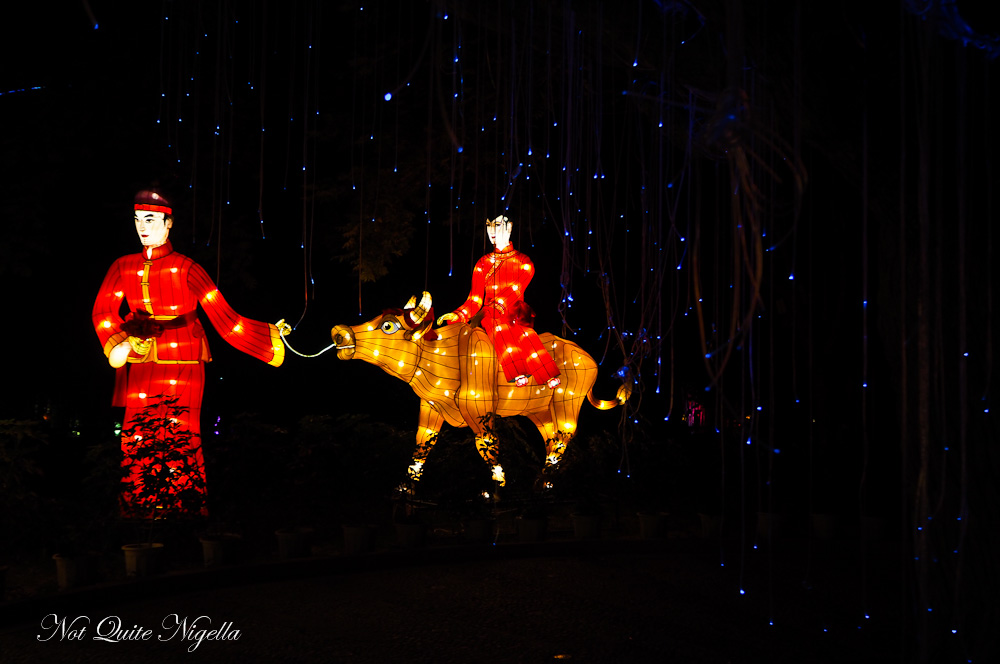 The night then moves on to nearby Elephant Trunk Hill and Water Moon Cave. Locals like viewing the moon from this aspect as they can see three views of the moon: in the sky, between the vague elephant formation and this moon reflected in the water. 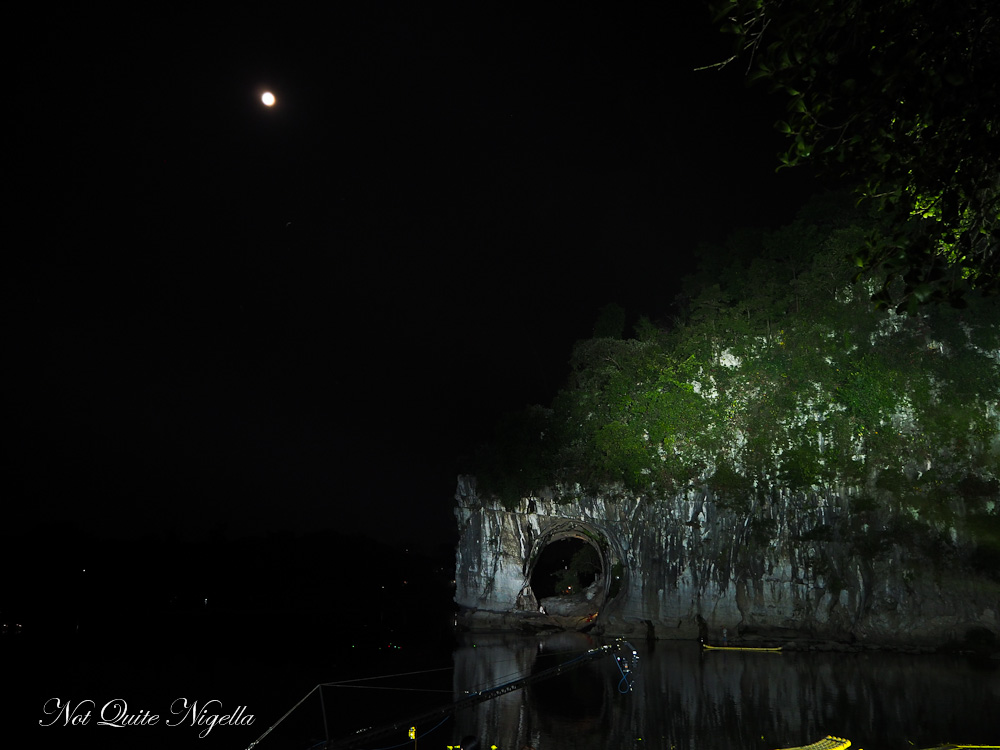 Later that evening they release lanterns into the air-the aim is to release these kongmingdeng red paper lanterns as high as possible. They're named after KongMingDeng said to be a clever man who lived 1,800 years ago. People dance and sing a sweet love song called "You are my little apple."

I watch the sight from my hotel room window as it goes on for hours and nibble on moon cakes and sip on my tea.

So tell me Dear Reader, do you like Chinese moon cakes? And what is the biggest holiday or occasion for you in the year?