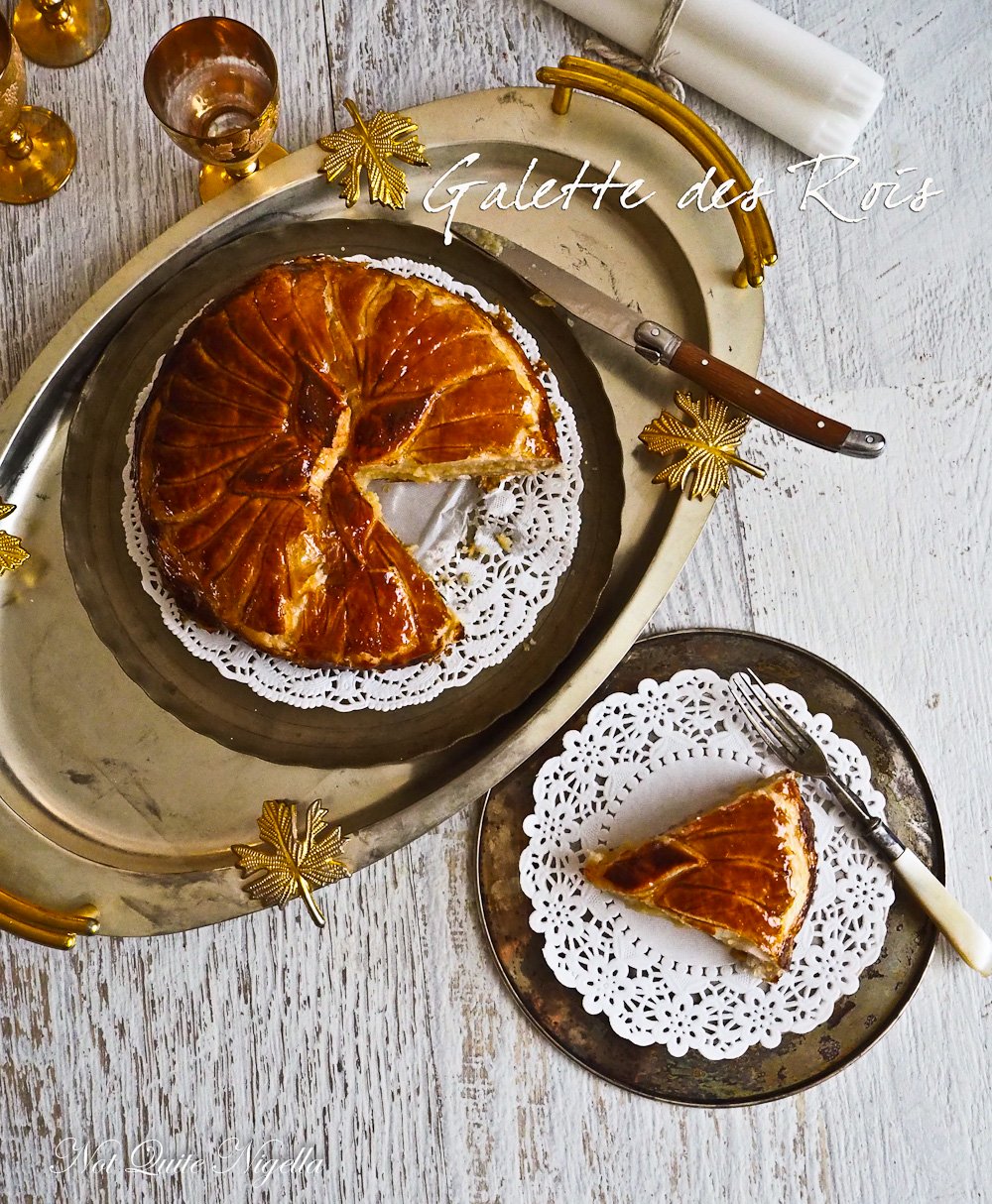 A traditional French pastry created in honour of the epiphany, the Galette des Rois or the King's Cake is a puff pastry round cake filled with almond cream. Inside each galette is a tiny figurine or a dried bean. Whomever gets the slice with this in it is crowned king (or queen) for a day and must also procure next year's Galette des Rois.

Everyone has their own image of their father. Mine has always been quite different from other fathers, an essentially disparate combination of a scientist that is also an artist. My father is also completely disinterested in the social aspect of life. Gatherings, socialising and talking to people are low on his priority list. If he can extricate himself out of a social situation, he will and we will find him painting. My father is also utterly reliable and always there. No matter how strange the request, even if he doesn't understand the request itself. Need astroturf? An Obama pizza? No problems.

A couple of days ago he came by to drop off the mail during his daily constitutional. We live in the same suburb as my parents although it's a large suburb so we don't live underfoot. I said to him, "I'll see you tomorrow okay?" and he looked at me puzzled. "What for?" he asked. "For your birthday!" I laughed. I knew he wouldn't have even remembered that the 1st of January is his birthday. It's just not a big deal. 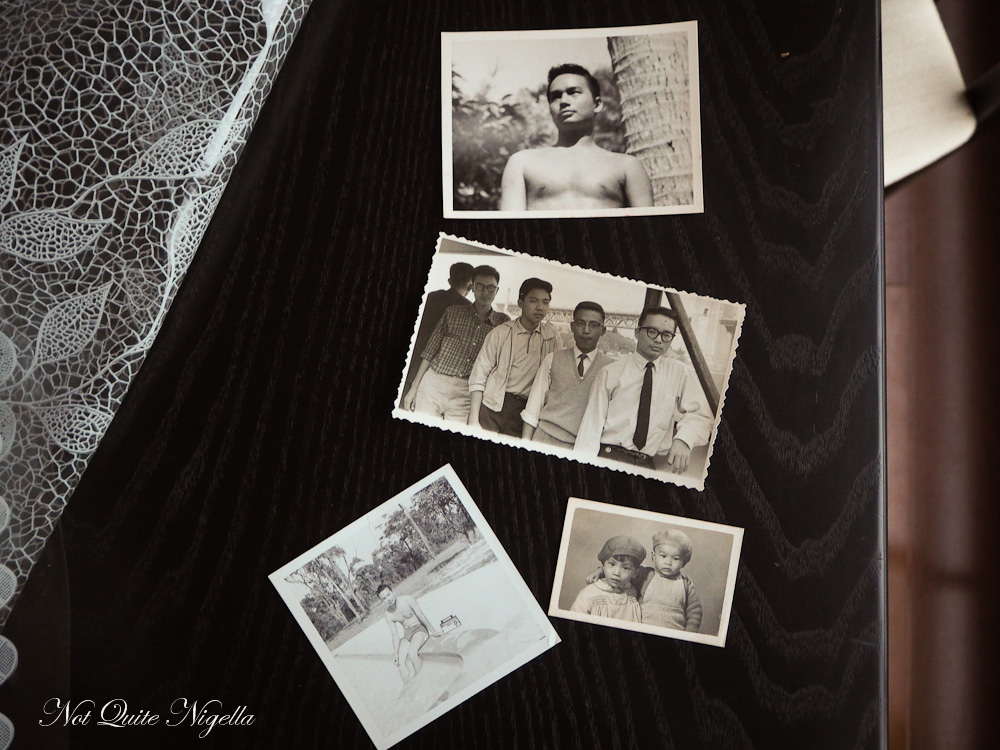 But having a family that loves birthdays means that we rarely forget a birthday (okay they forgot my birthday one year). He never really goes for sweets but there is one thing that he goes cuckoo for and that is Portuguese Custard Tarts. I usually make him a batch every year for his birthday or Father's Day. But I wanted to do something a bit different and I looked at my calendar to realise that a Galette des Rois would probably be the perfect thing for him. 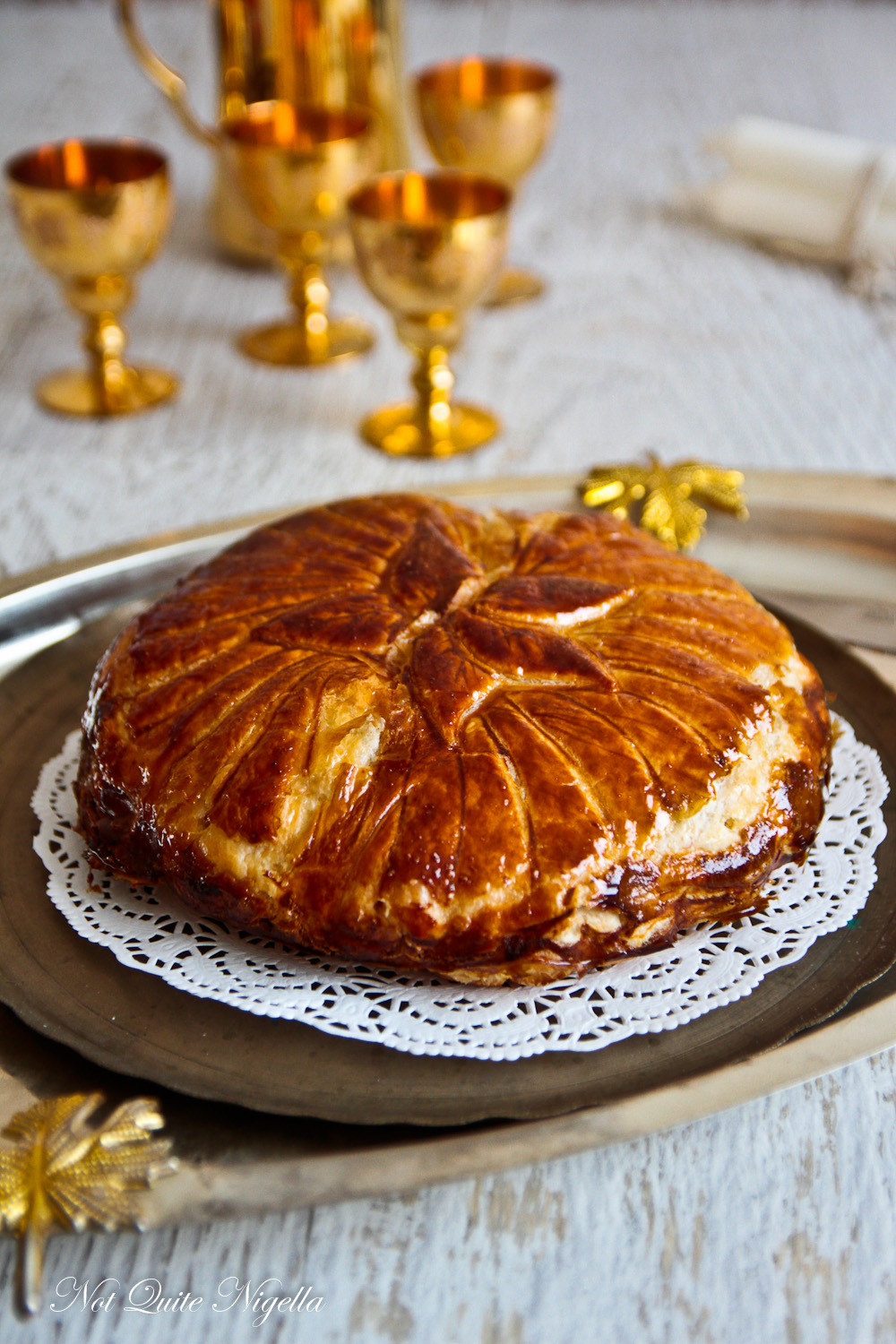 So what is a Galette des Rois? It's a cake popular in France during the months of December and January to celebrate the epiphany. Known as the "Kings Cake" it is usually served until the first Sunday of January (the 4th of January this year) but is so popular that it is consumed until the end of January. The "king" was determined by whomever cut the slice of the cake that contained a fève or a bean with the lucky recipient getting to wear a crown for the day. It later became popular to bake little ceramic figurines into the cake now with some becoming very collectible.

I first tried a Galette des Rois when a friend Myriam offered it to me and described the tradition. It was a large round puff pastry cake filled with an almond cream inside, baked until golden with patterns scored on top. There is also obligation for the winner as they have the role of procuring or making next year's Galette des Rois! 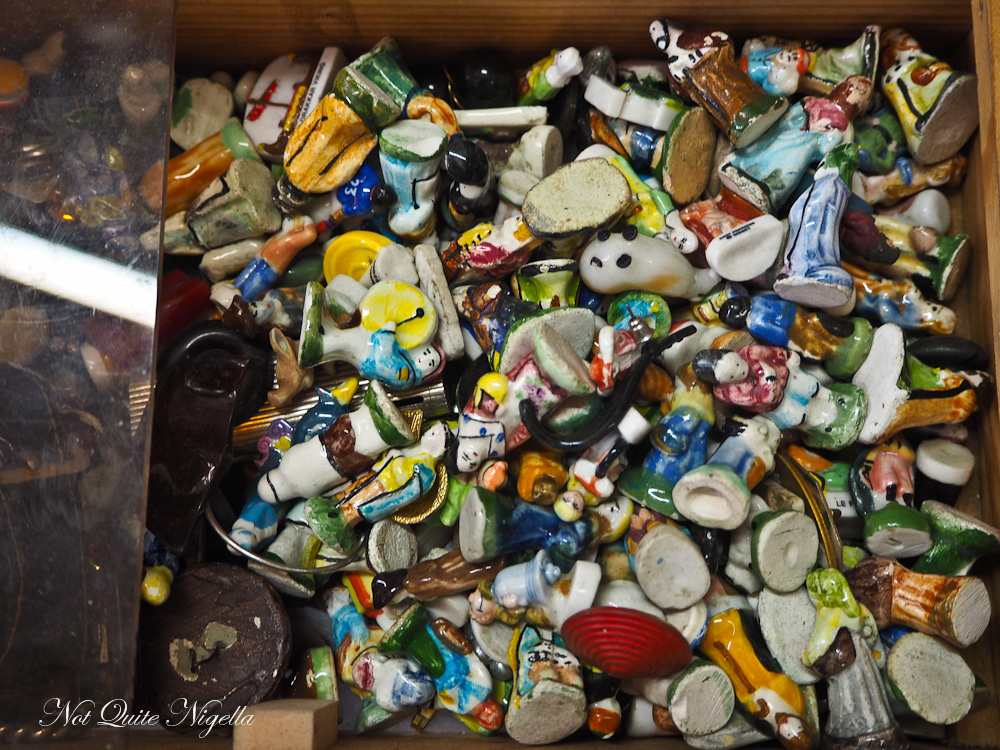 If you have concerns about people accidentally eating something ceramic, a dried bean is the best idea but I love the idea of a tiny ceramic object. When we visited Nice in November last year we happened upon a small antique fair. The gentleman that owned a store there was lovely and when I expressed delight at finding a bowl full of Galette des Rois figurines he smiled and popped one into my bag. I found that little figurine recently, nestled in the deepest crook of my handbag in a pocket that I never knew existed. It was fate really that I should make this as I had meant to make it every year since Myriam first introduced it to me. 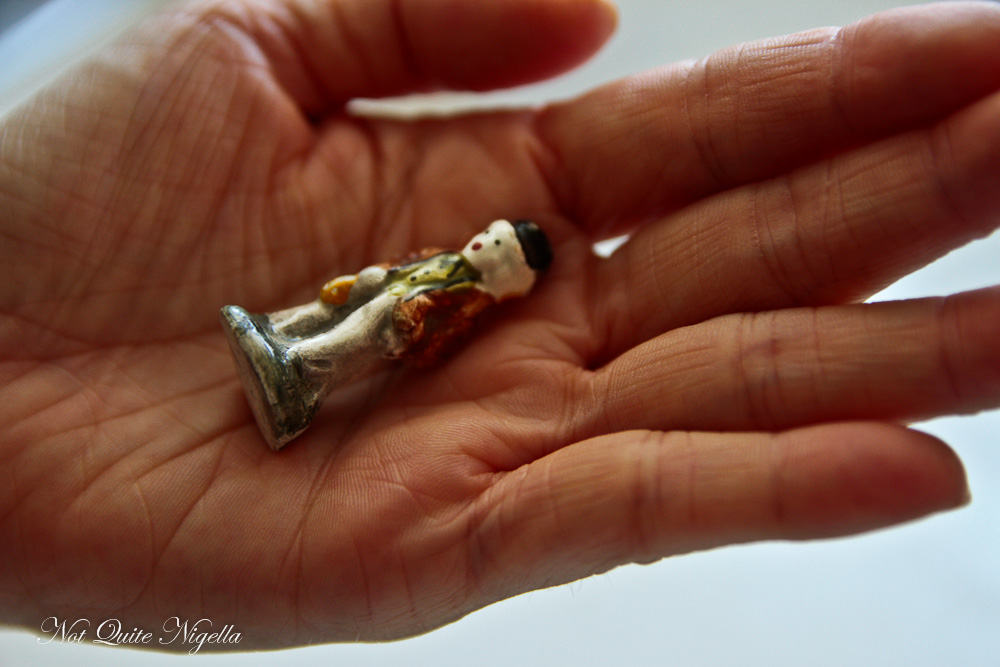 I ended up making two of these. First I made my own all butter puff pastry but found that it was a bit too challenging due to the hot weather and the high amount of butter. I got a better visual result with the store bought but taste wise, nothing could beat the home made puff pastry. All you have to do is cut some rounds of the pastry and fill it with an almond paste filling. I added some more eggs because I wanted it to be close to the pasteis de nata or Portuguese custard tart filling.

And as for who got the figurine? It was my sister Blythe who if challenged to procure next year's Galette des Rois, would perhaps buy it!

So tell me Dear Reader, do you care about things like birthdays? What is your father like? 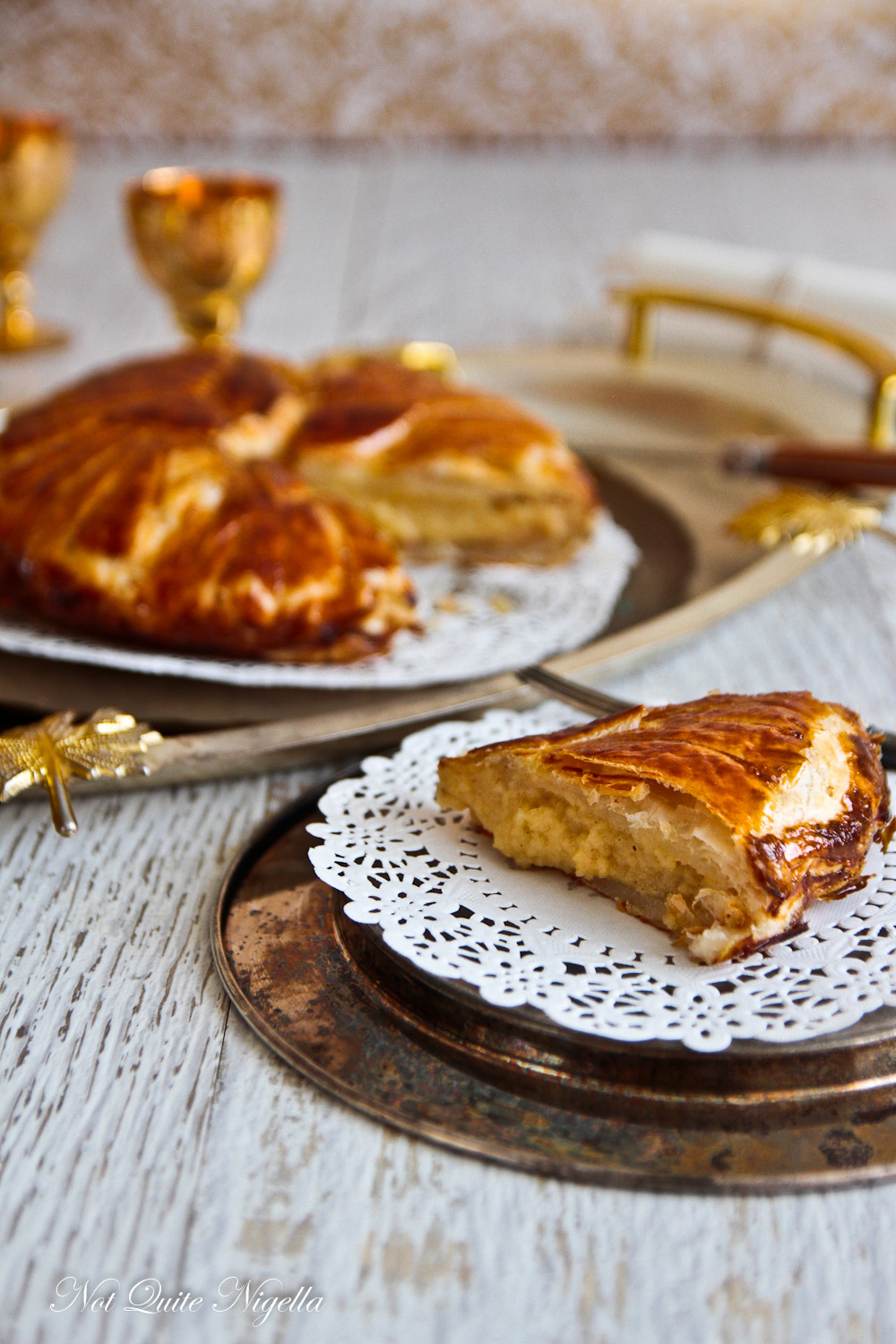 If you want to make your own puff pastry, see recipe here

Step 1 - Make the filling first so that it cools. Whisk the eggs and sugar in a jug and heat the cream until almost boiling. Whisk in the eggs, cinnamon or vanilla and knock the heat back to low and stir to form a custard. Mix with the almonds and place a sheet of cling film on the surface and allow to cool completely. 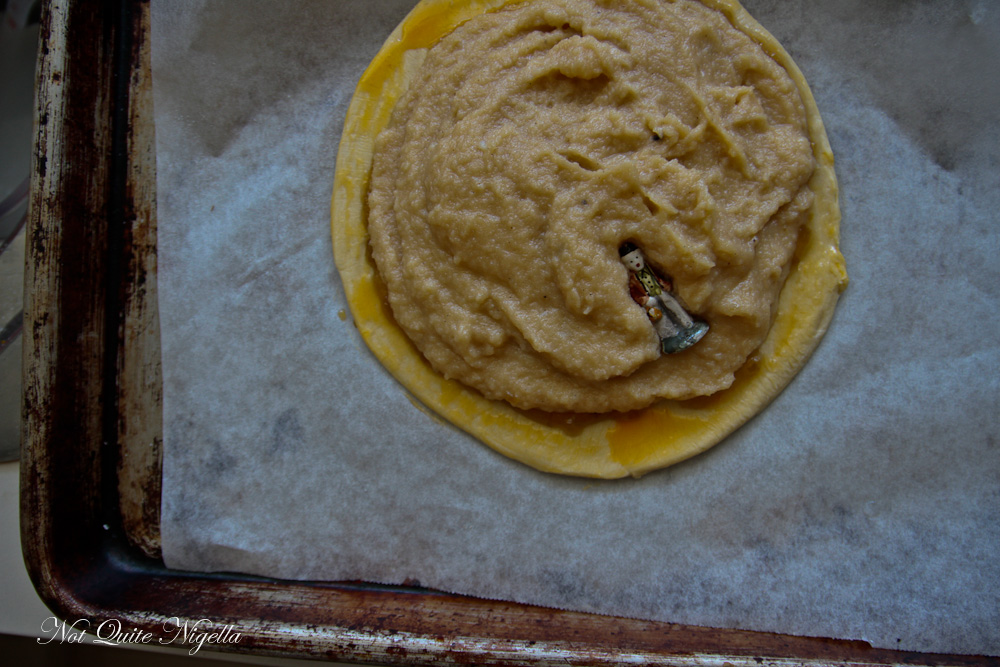 Step 2 - Preheat the oven to 220C/440F. Line a baking tray with parchment. Thaw the pastry partially and cut out four 24cms rounds. Place one on the parchment and brush with the egg yolk. Place another round on top. Then spread the jam on the base leaving a 1 inch border. Spread almond mix on top and then place the little bean, nut or ceramic ornament in the filling. Place the third round on top of this. Brush with egg and then place the fourth and final round on top. Press down to seal the edges. Using a paring knife, make patterns on the edge and on top making sure to cut deeply but not through the pastry. Poke plenty of holes in the pastry to allow air to escape. Brush with egg yolk and place in freezer for 10 minutes. 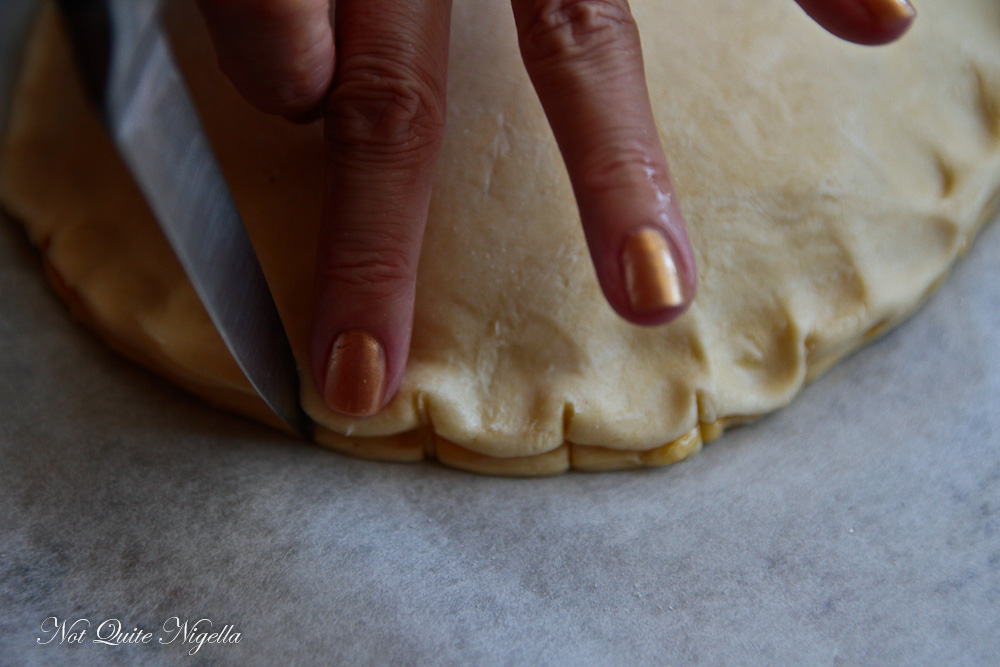 Step 3 - Make the sugar syrup by boiling the 1/4 cup of sugar and water in a small saucepan. Cool in an ice bath and place in the fridge until needed. 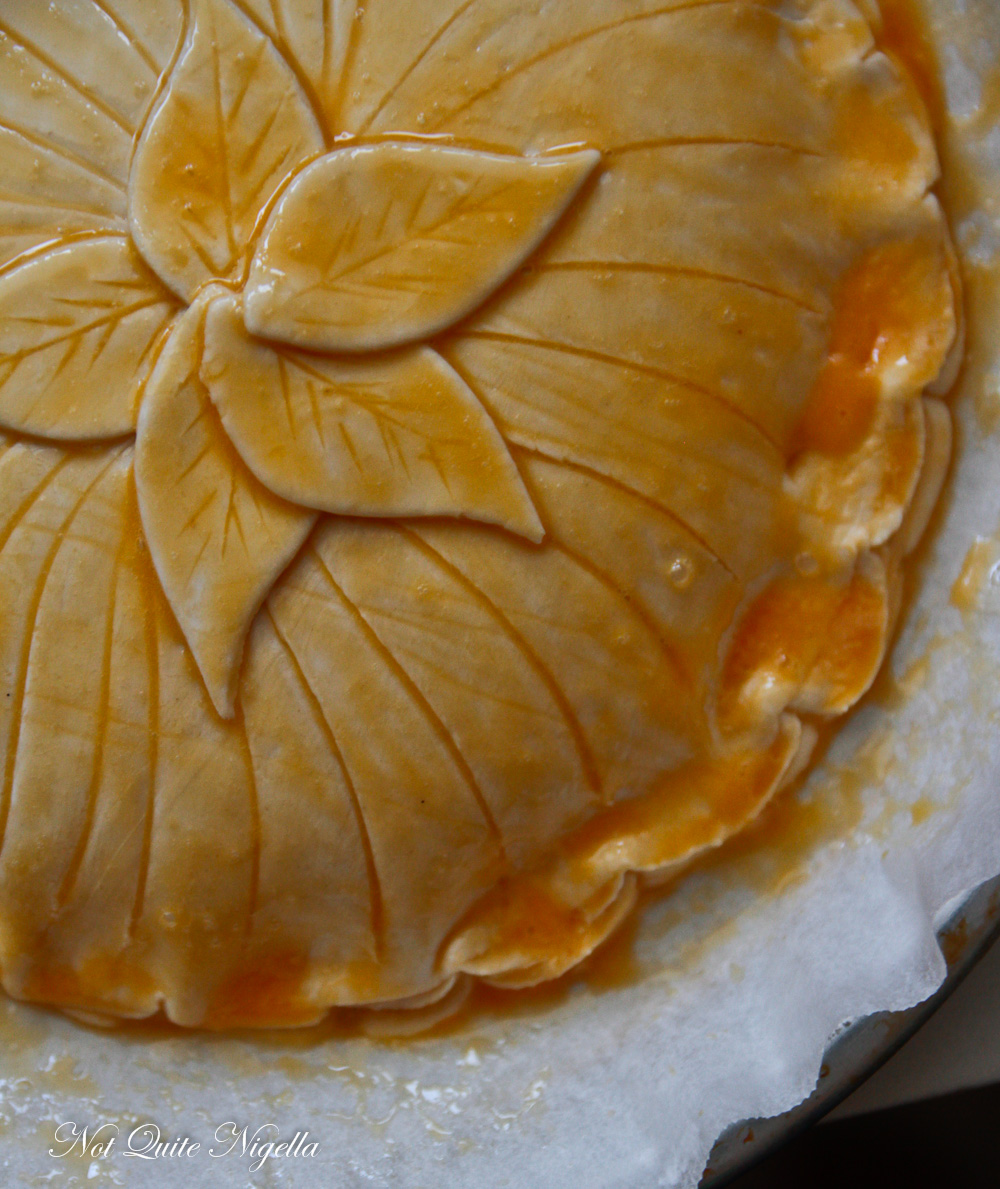 Step 4 - Bake the galette in the preheated oven for 25 minutes or until golden brown. Brush the hot galette with the cold sugar syrup to give it a glossy finish.