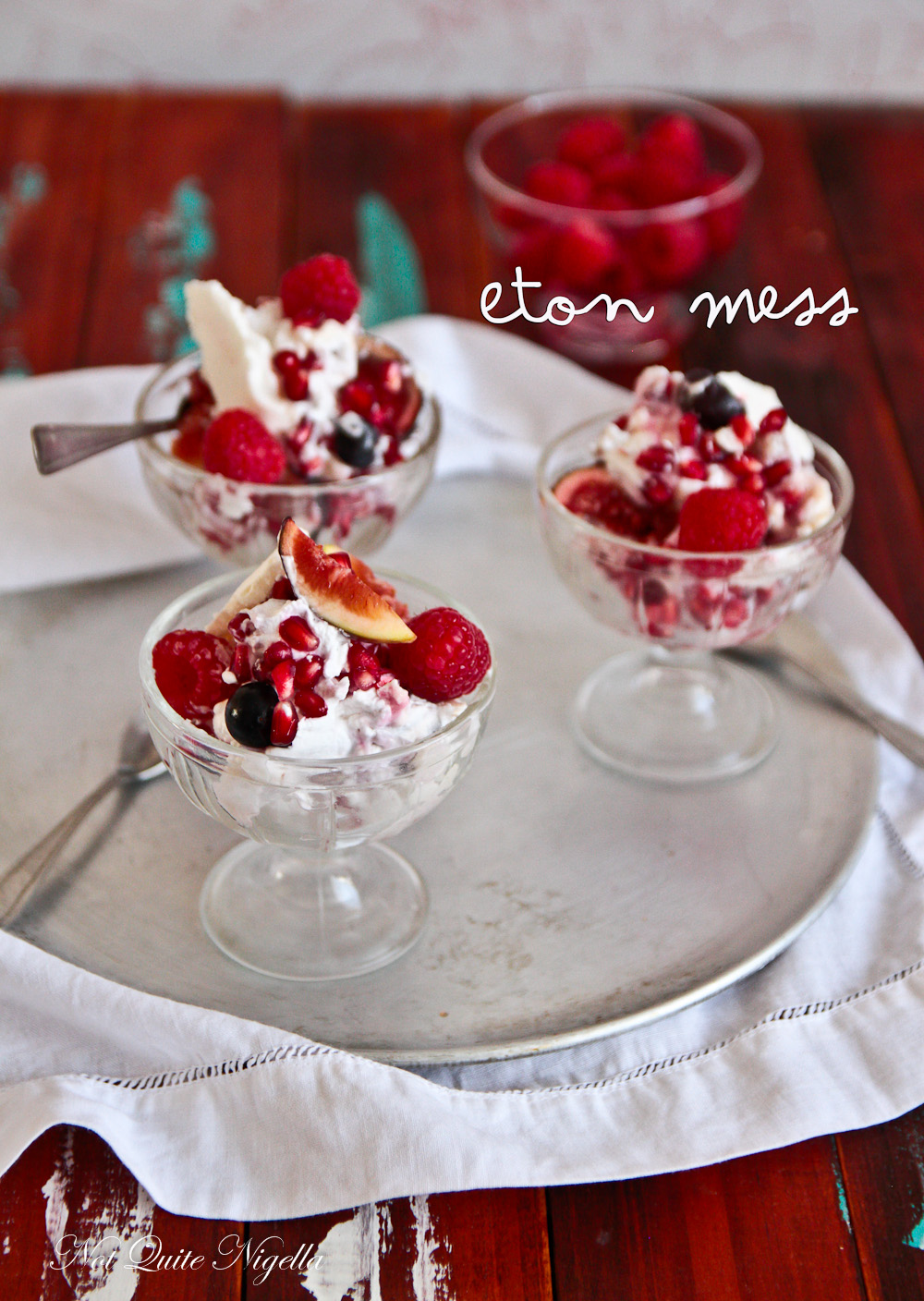 For vegans, a meringue or an Eton Mess is off limits for a few reasons: eggs provide the base for a meringue and cream binds the dessert together. But what if you could make a meringue out of something quite different? Something that is vegan and something that you would ordinarily throw away? Read on for a most interesting recipe!

Long time readers know that one of my favourite people in the world is my friend Queen Viv. You would need to meet her to know that she is a great lady that can cast a seasoned eye across things and people, sum them up quickly and draw an accurate conclusion. It's her inquisitive and journalistic instincts. She is also one of the most open minded people I know.

The other day she said to me, "Well you know that I had a friend who was a very accomplished stripper...". I knew I was in for a good story. She explained that she used to put a mobile phone in her hooha and it would ring and she would fetch it out and hand it to the nearest gentleman in the audience and tell him, 'It's for you!'.

She's a woman who is friends with people from all walks of life. She knows that a job doesn't define you and she can see beyond to the actual person. But she will always offer an honest perspective on things. 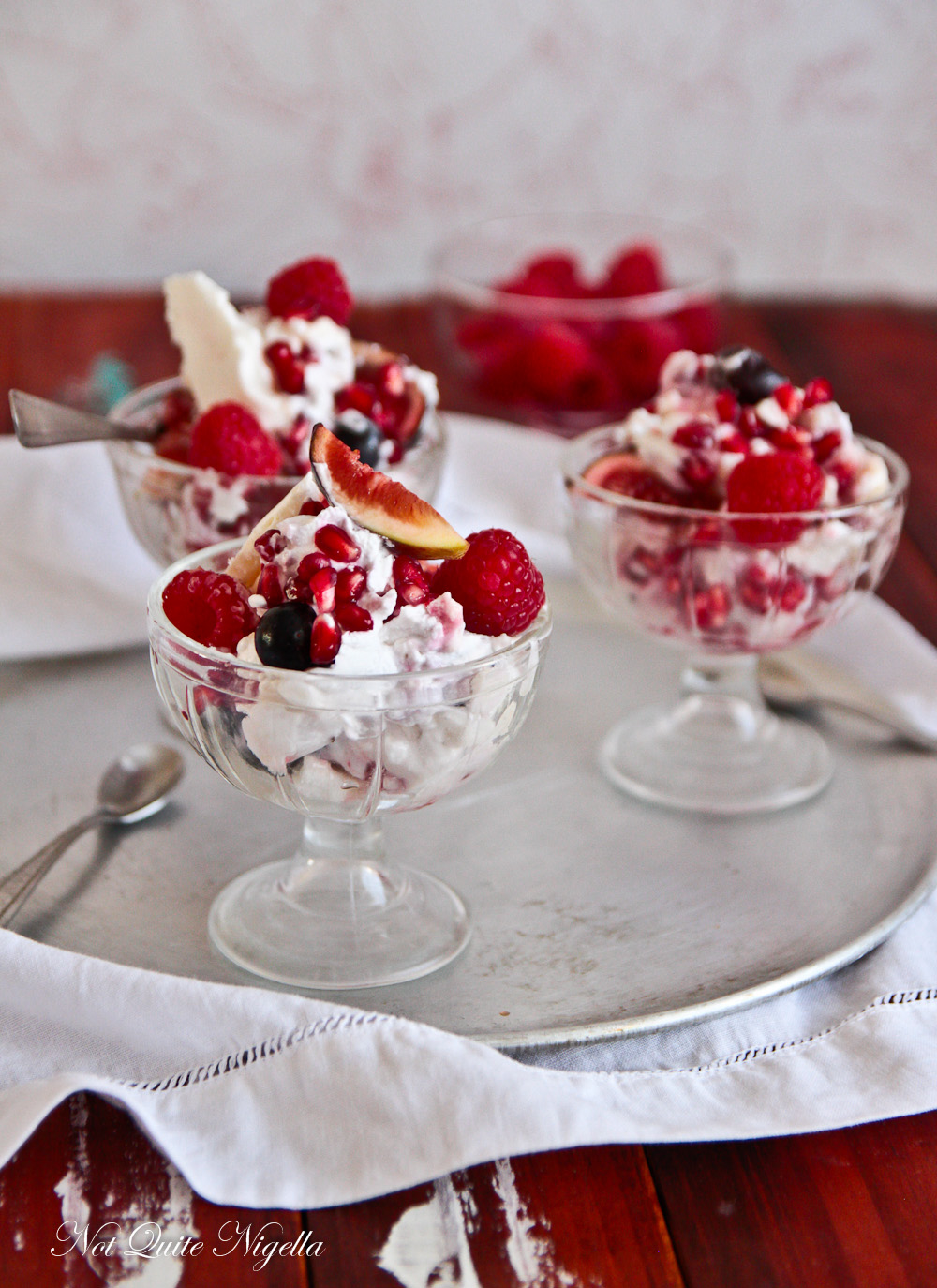 She rang when I was in the middle of making this recipe. When I told her what I was making she quickly said "Ugh!" and questioned why anyone would make it. A fair enough point. Although this was the woman who introduced me to the idea of the Ritz Cracker Apple Pie where apples are replaced with Ritz crackers. And up until a few weeks ago, I didn't know that you could make an eggless meringue. It's really a crazy recipe where the eggs in meringue are replaced by of all things, the liquid in a tin of chickpeas.

Yes, the liquid from a tin of chickpeas.

Whaaat? I know, who even came up with this idea? People be crazy!!

We eat eggs so we are more than happy to have a traditional meringue but it was curiosity that got me to make it and it was for no better time that for Mother's Day. This year we went to Mr NQN's sister's apartment with both families. There would be vegan (Mr NQN's brother Manu) and then almost vegan (his mother, sometimes, it's like quicksand, always shifting). So what better audience to make this for that the Elliotts? 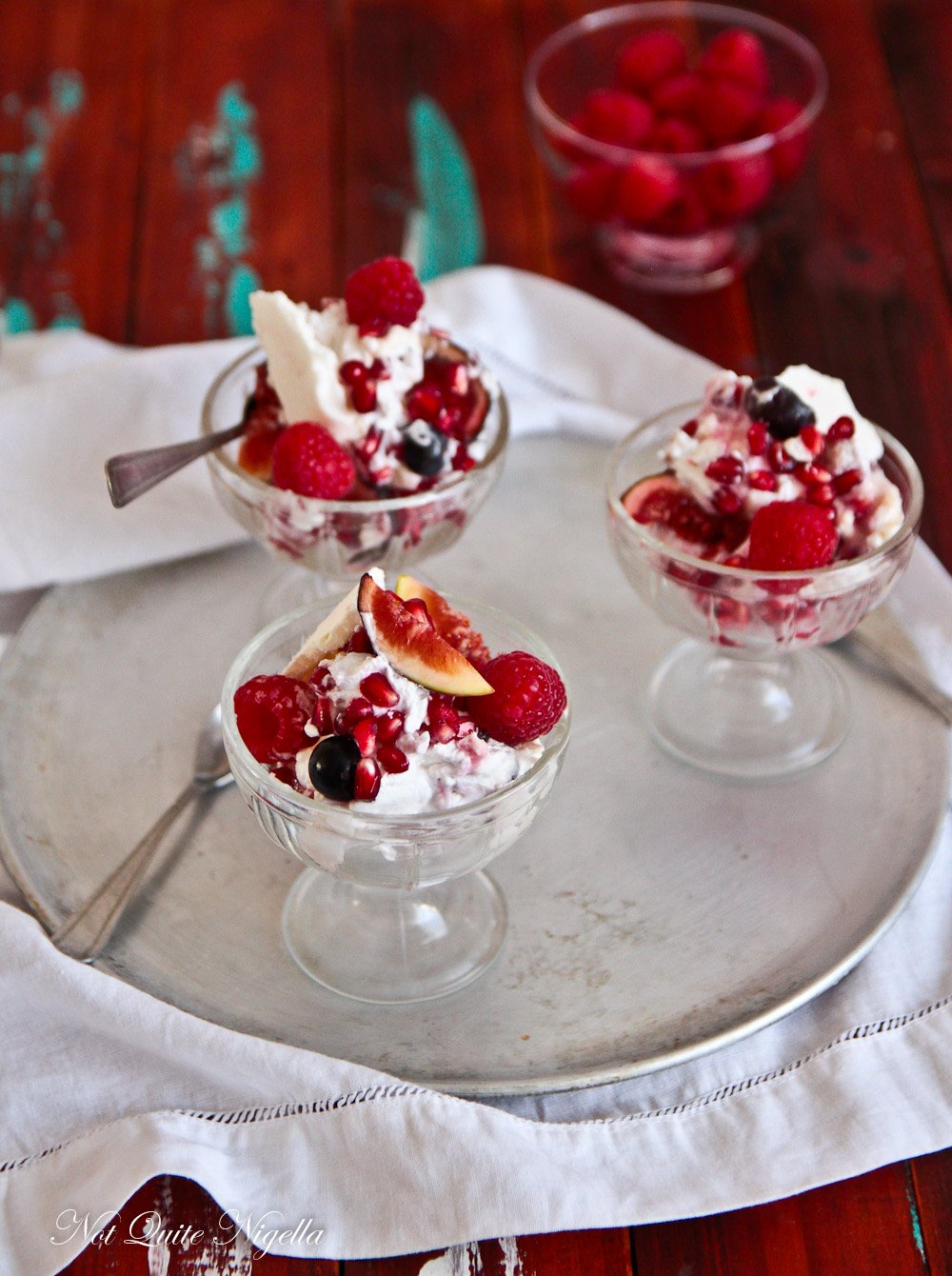 Mr NQN helped me make it as he was just as curious as I was. At first the liquid looks absolutely hopeless. I mean really who made this for the first time? It's crazy! But slowly, as we added cream or tartar and sugar, it started to take shape. It's slower than a regular meringue to develop but whip this on the highest speed and be patient. It will get there against all doubts - trust me, I was all doubty too. There's no chickpea taste or any taste really just like when you use egg whites.

The thing about this is that you cannot really make a pavlova out of it reliably. I tried it twice and both times it melted into a puddle of syrup underneath a meringue top. But you can successfully make smaller meringues for Eton Mess. I used the shards from the first one to make an Eton Mess for Mother's Day because I didn't want the whole thing to go to waste and kept to the vegan theme by using whipped coconut cream which is made by whipping up the thick, top portion of a container of coconut cream and whatever fruit was good at the market that day. 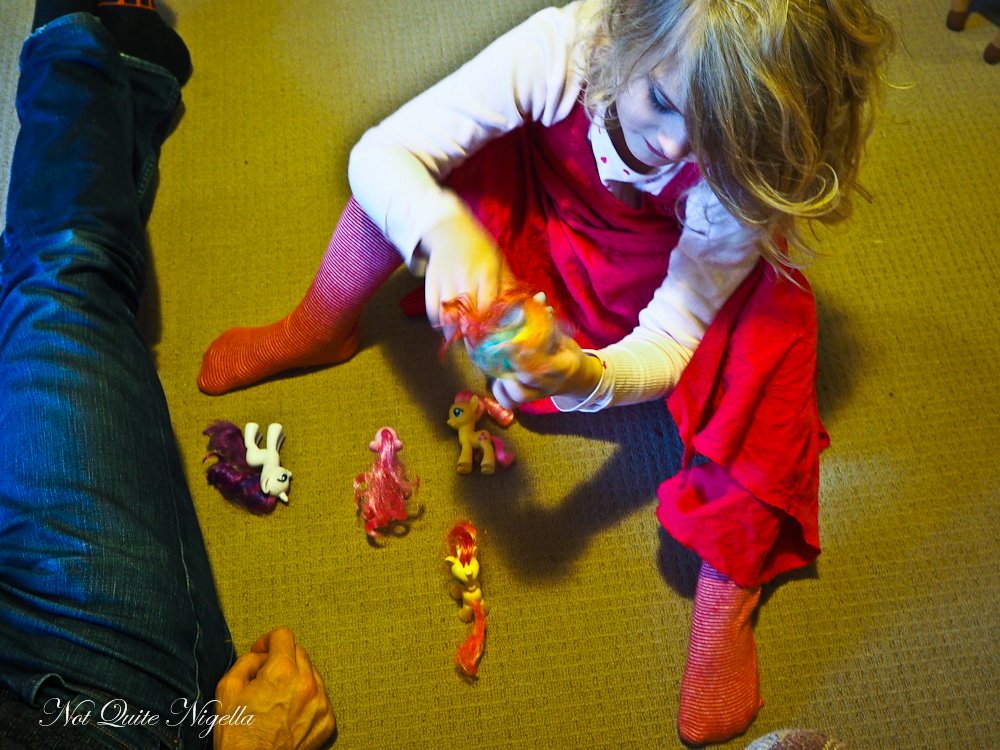 Mr NQN playing with Aura Lily. The pony world is confusing and there are so many pony names!

The Mother's Day afternoon tea went well. There was a preponderance of sweets, my fault really. Alas Manu didn't make it until everyone had almost left so I never found out what he thought of the Eton Mess but everyone else really enjoyed it, even Tuulikki who happened to be full vegan that time! I've given you the recipe for the vegan and non vegan version below.

So tell me Dear Reader, would you go for the regular or vegan version of this? Do you ever have to cater for vegans and do you have a repertoire of recipes to do so? And is there anything that you take out of your diet for allergy or other reasons? 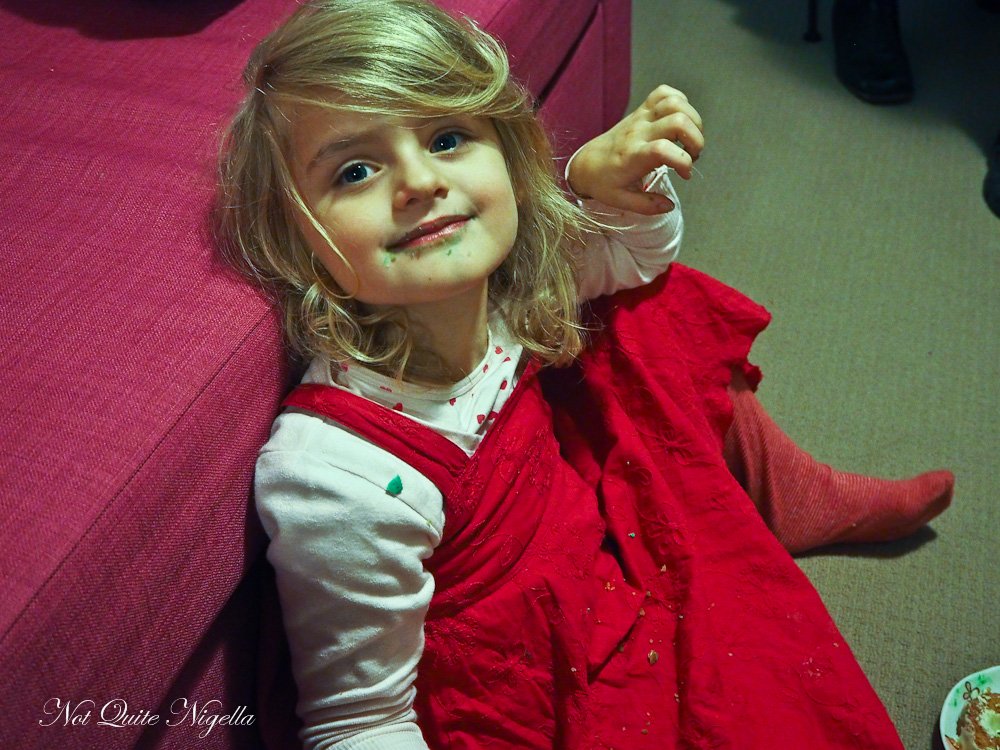 A green frog donut all gone! 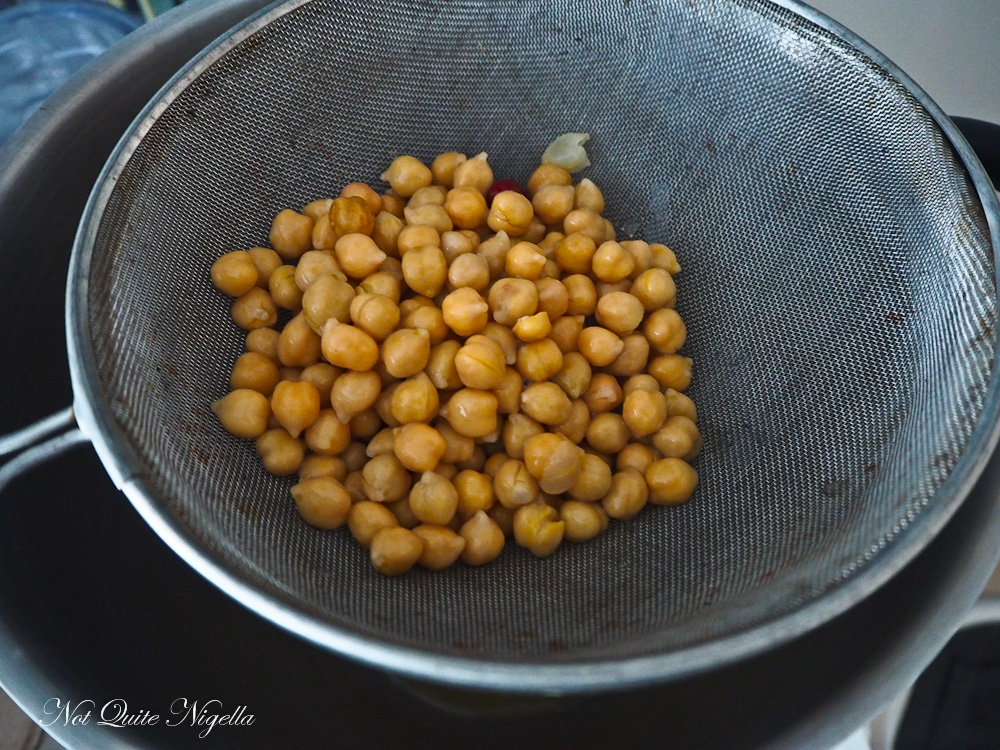 Step 1 - Preheat oven to 130C/266F and line 2 trays with parchment. Place a strainer on top of a mixer bowl and empty out the chickpeas leaving the liquid in the bowl. Affix a whisk attachment. Start whisking on a high speed until it starts foaming. Add cream of tartar and sugar gradually and whisk until it becomes thick - it takes longer than with egg whites. The finished product should be glossy, firm and spreadable. If you can tip the container upside down without it moving then it is ready. 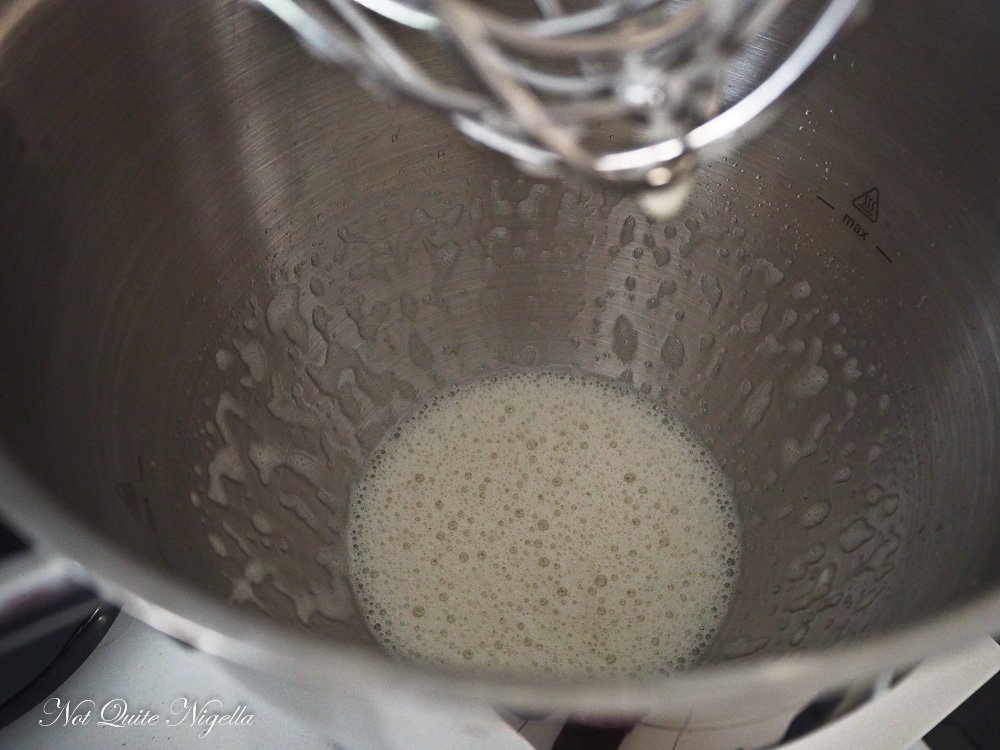 Step 2 - Pipe or dollop small rounds onto the lined tray. Bake in the oven for 1 hour or until they are set. Cool. In the meantime, wash the bowl and put it in the fridge to chill. 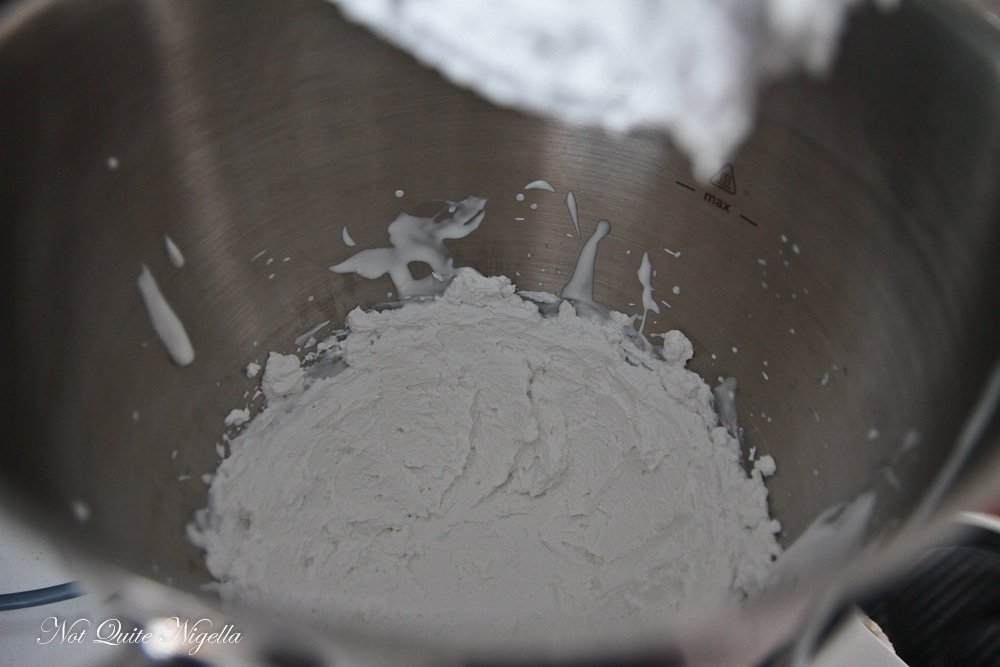 Step 3 - Place the chilled coconut cream in the bowl and whip until creamy and fluffy. Just before serving, assemble the Eton Mess by folding the coconut cream with the meringues and fruit. Reserve some of the fruit and meringue to decorate. 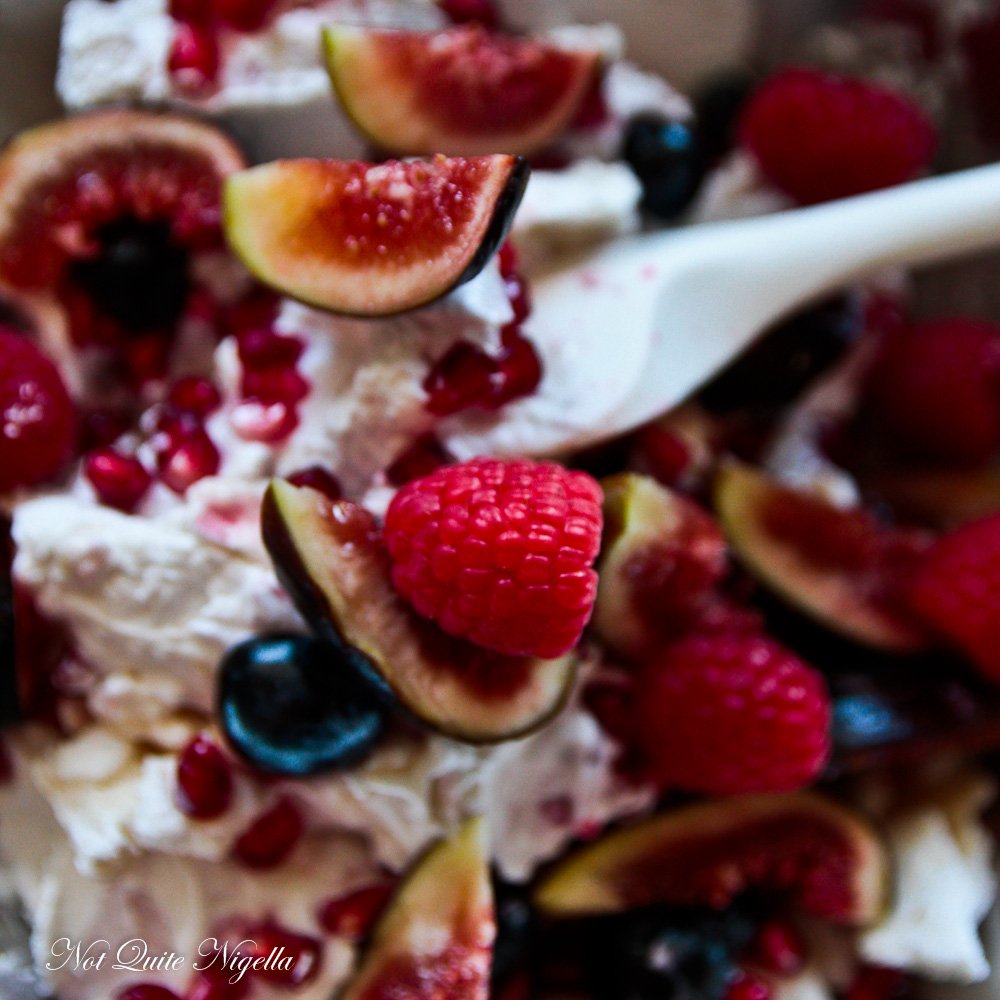