Five of Sydney's Most Talked About Sandwiches!

The humble sandwich has changed from a humdrum lunchtime offering to something that people actively seek out. From soft, fresh bread, a range of fillings from crunchy fried chicken, poutine, artisanal pastrami and five cheeses and truffles, eating a simple hand held item has never been so delicious. Here are some of Sydney's most talked about sandwiches!

I can't speak for the whole world but I can attest to the fact that I have a lot of Liz Lemon in me. It's half of the reason why I watched 30 Rock. I could relate to Liz's clumsiness, awkwardness but most of all her obsessions with food (it's only a matter of time until I do a table flip, try stealing my lunch). And one of Liz's very favourite foods was sandwiches. Yup the humble sandwich. For the last few weeks I've been sneakily trying sandwiches all across Sydney! All in the name of research. Without further ado, please allow me to bring to you five of Sydney most talked about and Instagrammed sandwiches!

1. Katsu Sando at Cafe Oratnek, Redfern - Or Is It? 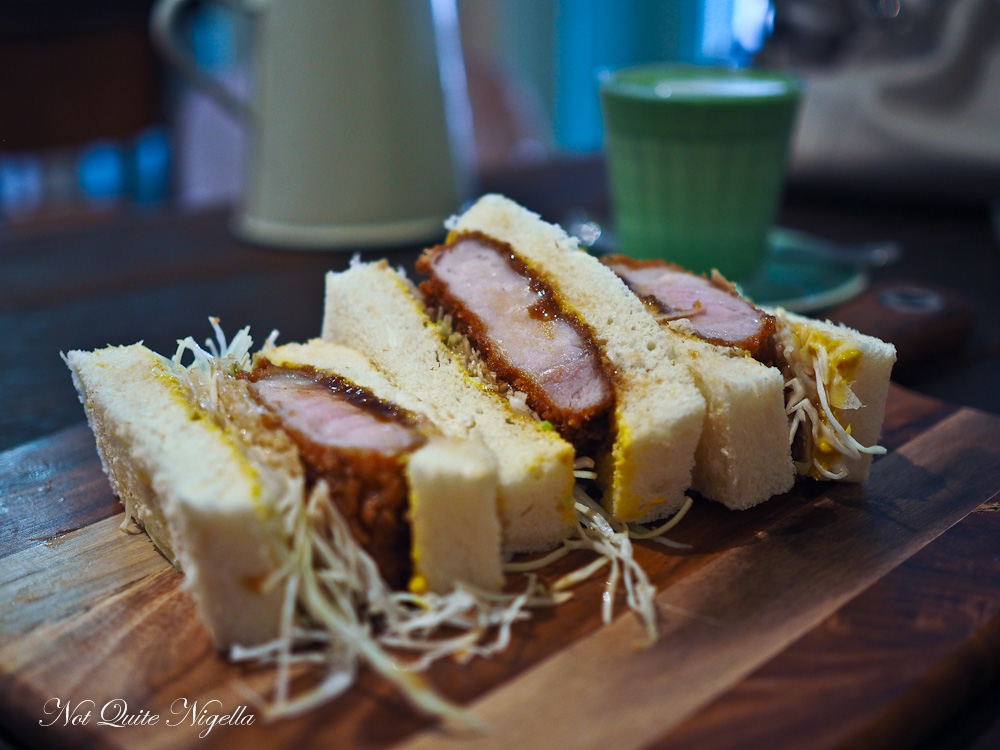 If a Sydney sandwich were to "win" Instagram, surely the katsu sando at Cafe Oratnek would be one of the hottest contenders. Oratnek is Kentaro spelled backwards, Kentaro or Kenny Takayama being the chef here, formerly the head chef at Bill's. The Pitt Street Redfern eatery sells 400 of these panko crumbed and fried pork fillet sandwiches a week. Certainly the bread is super soft white bread, there is finely sliced cabbage and mustard and the juiciest, crunchiest pork fillet inside. Sando is Japanese katakana for a shortening of the word sandwich. 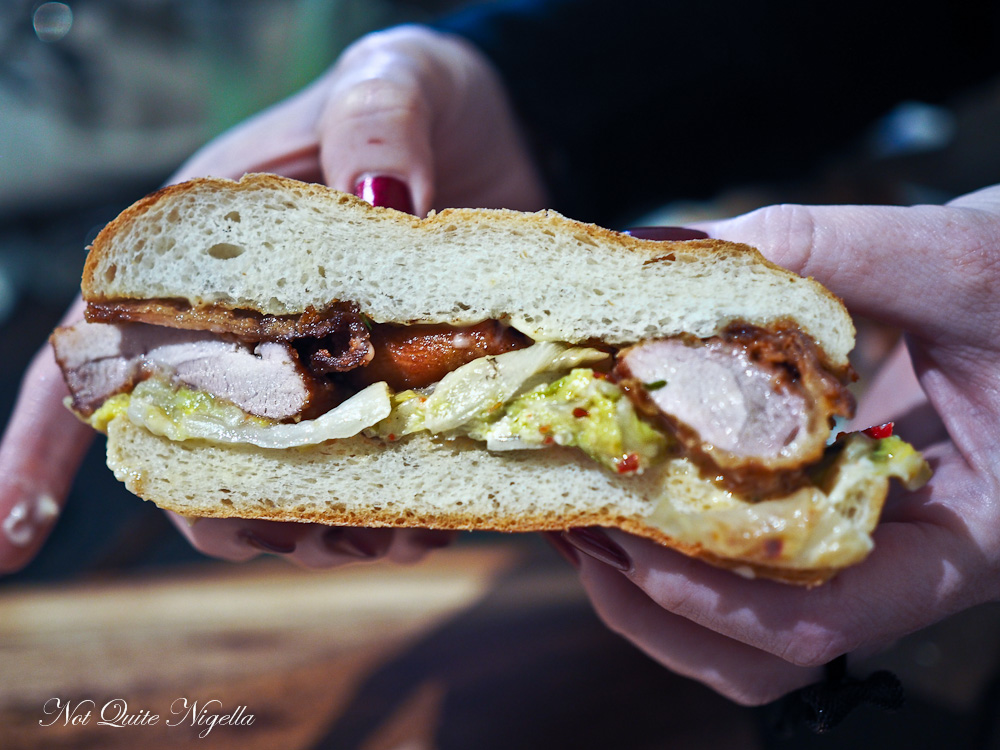 But ask any of the staff and they will point you towards another sandwich. While countless katsu sandos breeze past on wooden boards, the staff choice is the Japanese fried chicken served in a fresh soft roll and with mayonnaise and kim chi. Kentaro makes his own kim chi and it's brilliant. The chicken is soft, gingery and garlicky (bring mints) and the bun soft and the kim chi spicy. Perfection.

There are two kinds of Reuben sandwiches at Reuben Republic, an East Coast version and a West Coast version the differences being whether you want it on light or dark rye and with warm sauerkraut or Funky Slaw. Most people go for the classic East Coast with the warm slaw. The pastrami here is slow cooked beef brisket and chef John Bogiatzis slices of thick soft, slices and places them in soft, fresh light rye along with sauerkraut, Swiss cheese and Russian dressing with some halved piquant pickles on the side. 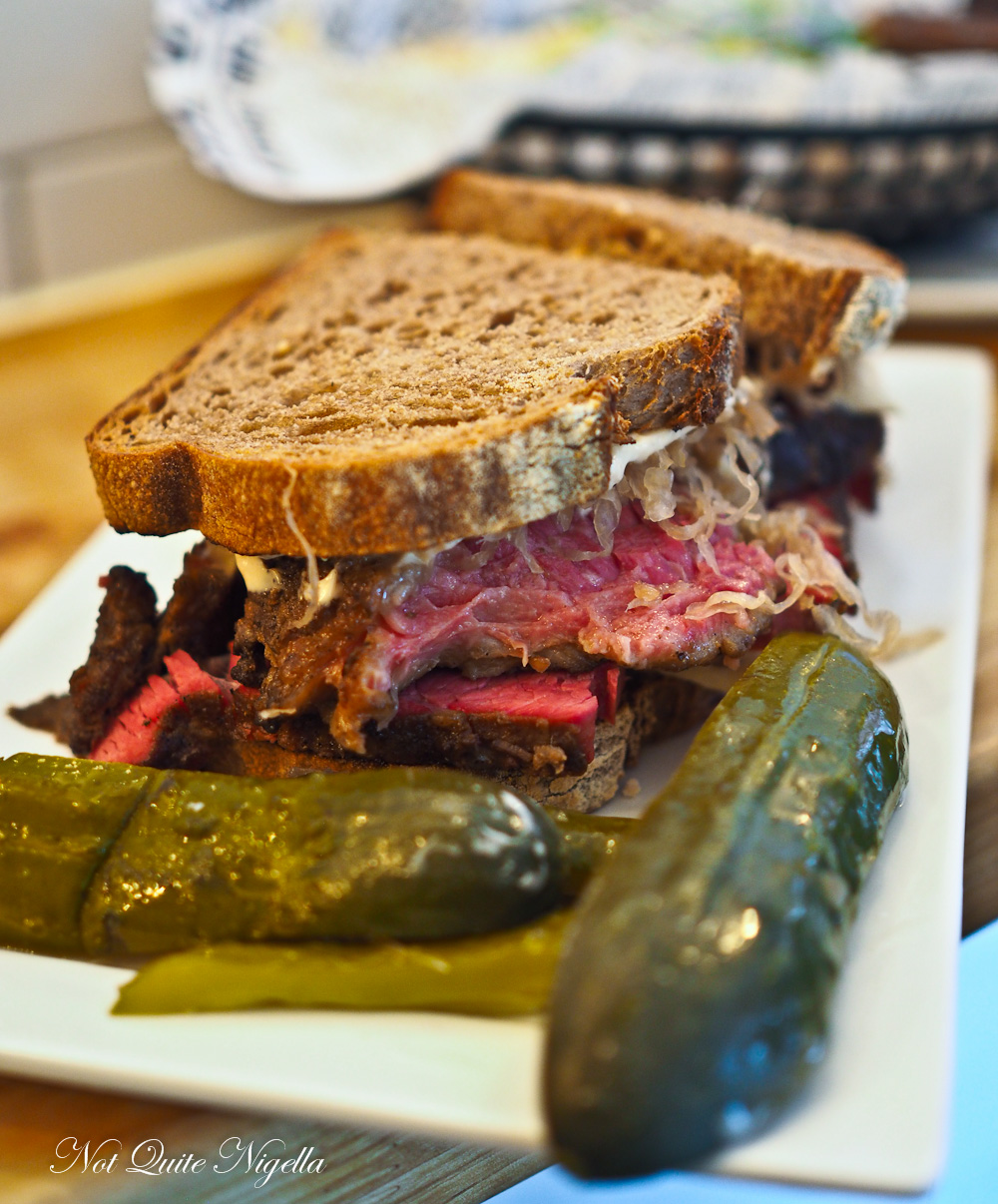 One sandwich is enormous although not those hulking enormous ones that are made famous in New York. Here is it all about balance and quality over quantity. The warmed bread and soft brisket are a match made in heaven. 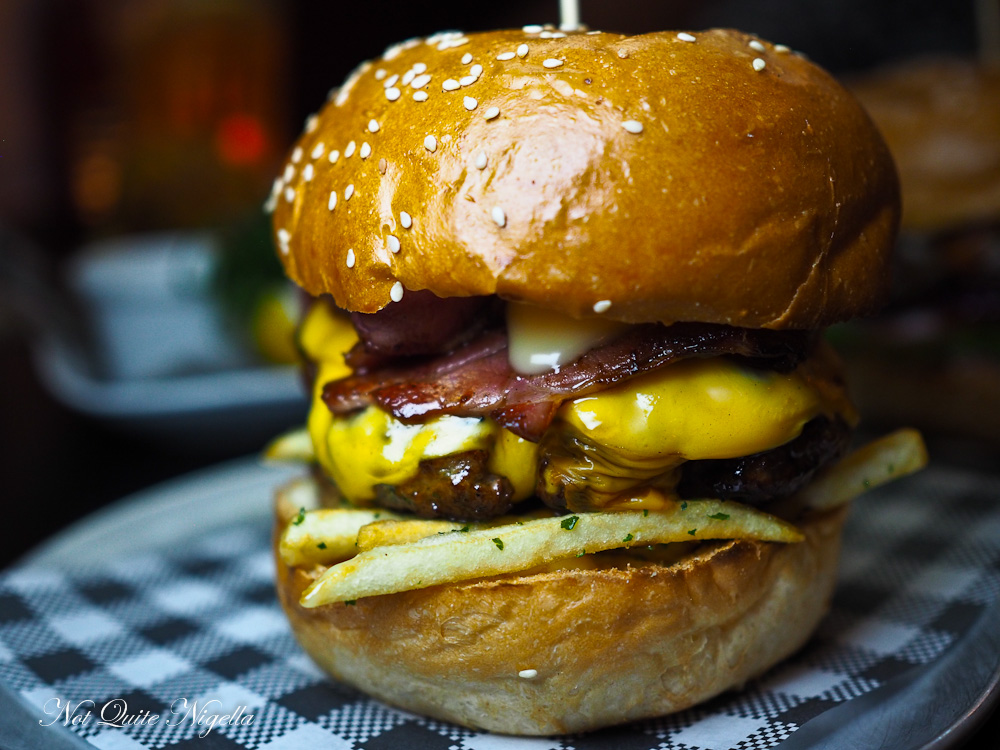 Okay so a burger isn't technically exactly the same as a sandwich but the Blame Canada burger at Bar Luca near Circular Quay has garnered quite a reputation and is the bar's most popular burger selling between 400-500 a week. Where does the Canadian reference come from? Why it's from the addition of poutine on a burger. Yep take a minute to let that absorb - poutine (chips and gravy) on a burger. And Canadians I know what you might be asking next - there are no cheese curds (because they are hard to find) but they use bocconcini. According to chef Sarah Robbins, "Inspiration came from a love of bacon and maple syrup! We originally put it on as one of our weekly specials but it was so popular we decided to add it to the menu, also so no one else could claim it!". 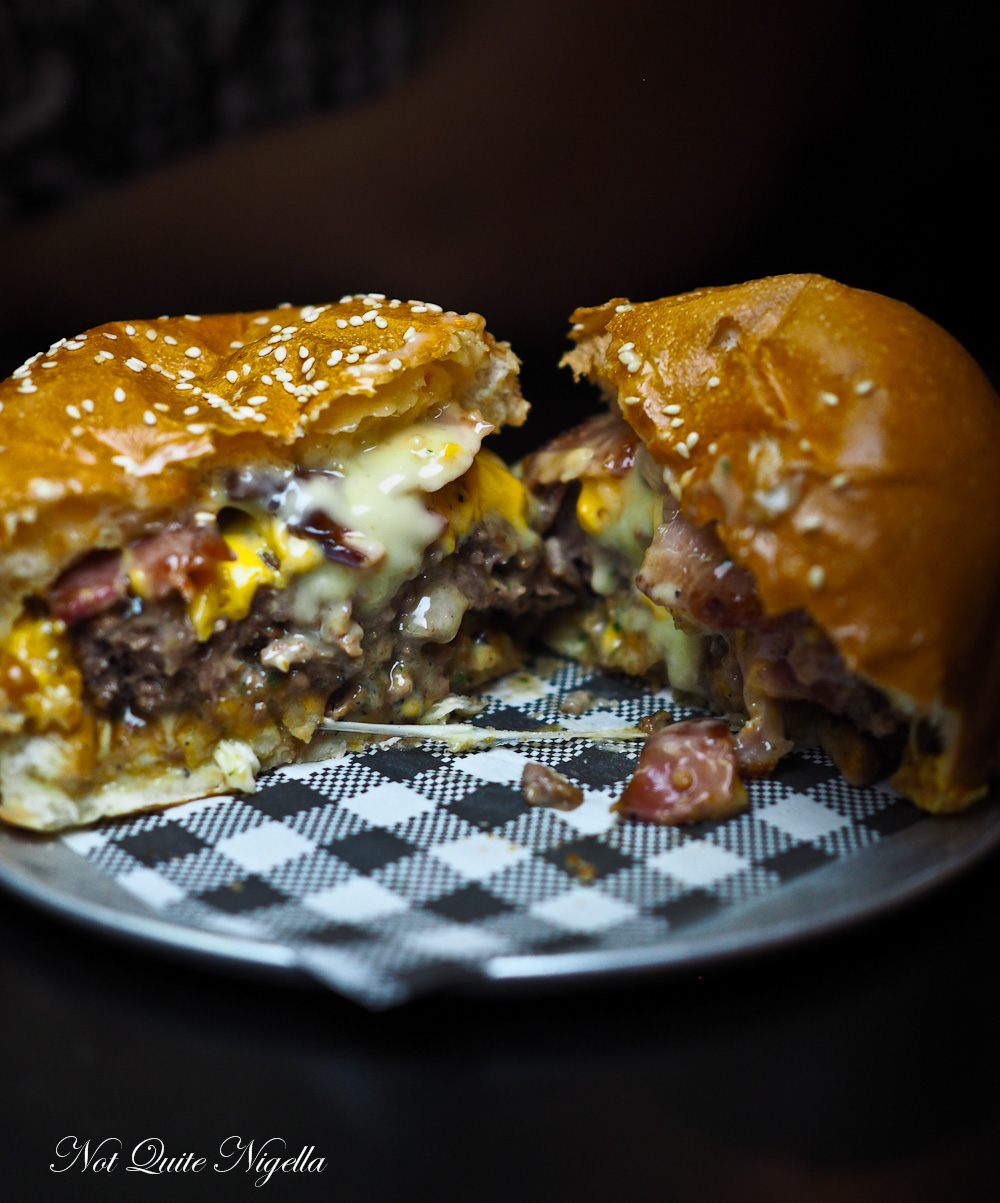 The Blame Canada isn't quite as crazy as it sounds. It's really a 200g/7oz. wagyu beef patty that is glazed with maple syrup on the grill with maple glazed streaky bacon, French fries, beef gravy, bocconcini & maple aioli. It's sloppy, it's drippy (the gravy and aioli), it's super rich but it's also absolutely delicious. Don't wear white while you eat it. If you spill anything apparently you can Blame Canada ;) 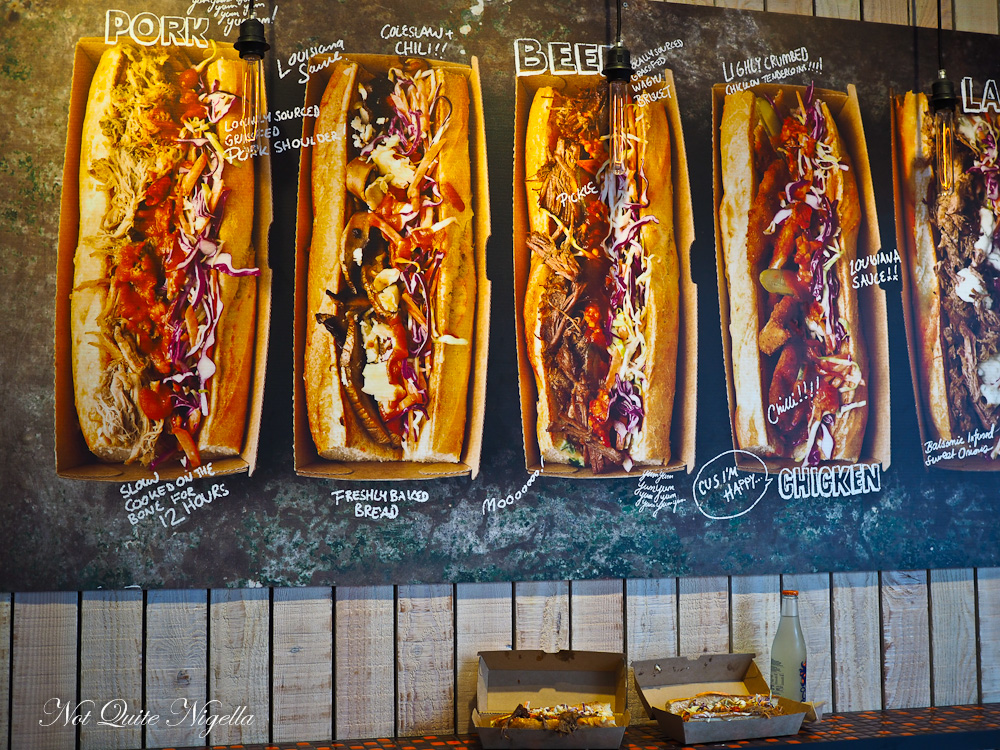 It may look like a fast food takeaway at first but then you notice little things like the Le Creuset pots that they carefully ladle things out of, the feedback signs and the cuts like grass fed beef brisket and pork shoulder. Monster Rolls used to be solely a food truck but has now found a permanent home on the corner of Oxford and Crown Streets in Darlinghurst. "If you give us feedback that the meat was too salty, we'll all have a meeting about it that evening," says one of the owners Sam Dargon. 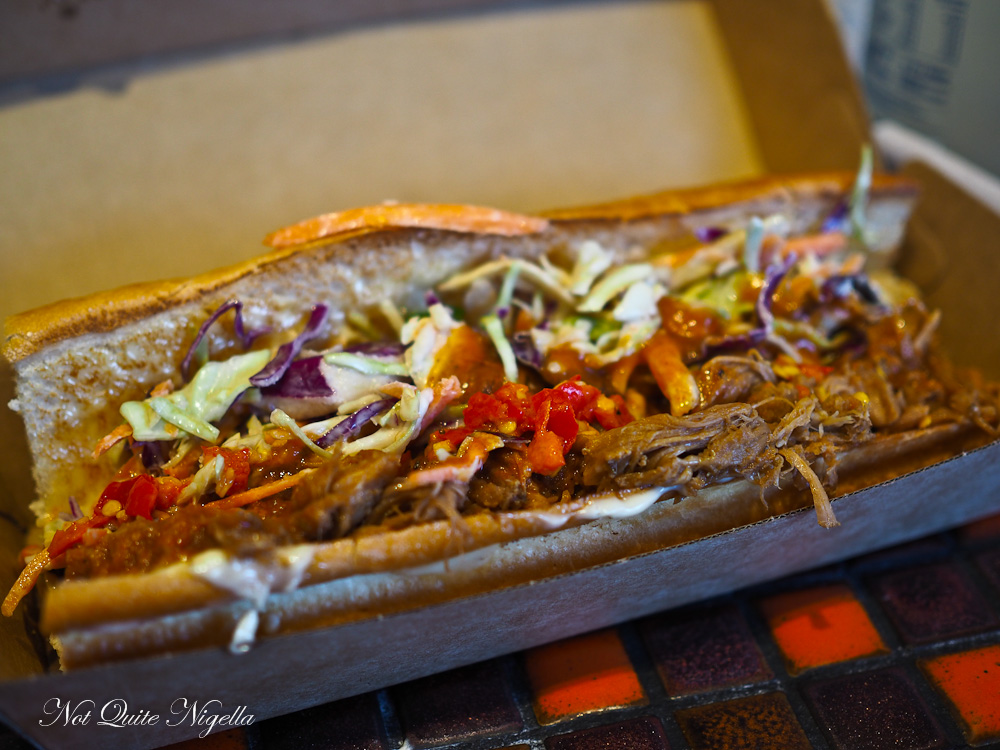 The two most popular are the beef and the pork but our favourite is the pork. The pork shoulder roll is served on a fresh baguette (par baked elsewhere but then finished on the premises so that it comes to you warm), whole egg mayonnaise, slow cooked pork shoulder, louisiana sauce with fresh coleslaw and chili sauce. It's a little like a banh mi with the spicy chilli and mayonnaise but the meat it is pure American pulled pork.

5. The 5 cheese and truffle toastie at Bennelong's Cured and Cultured Bar, Circular Quay 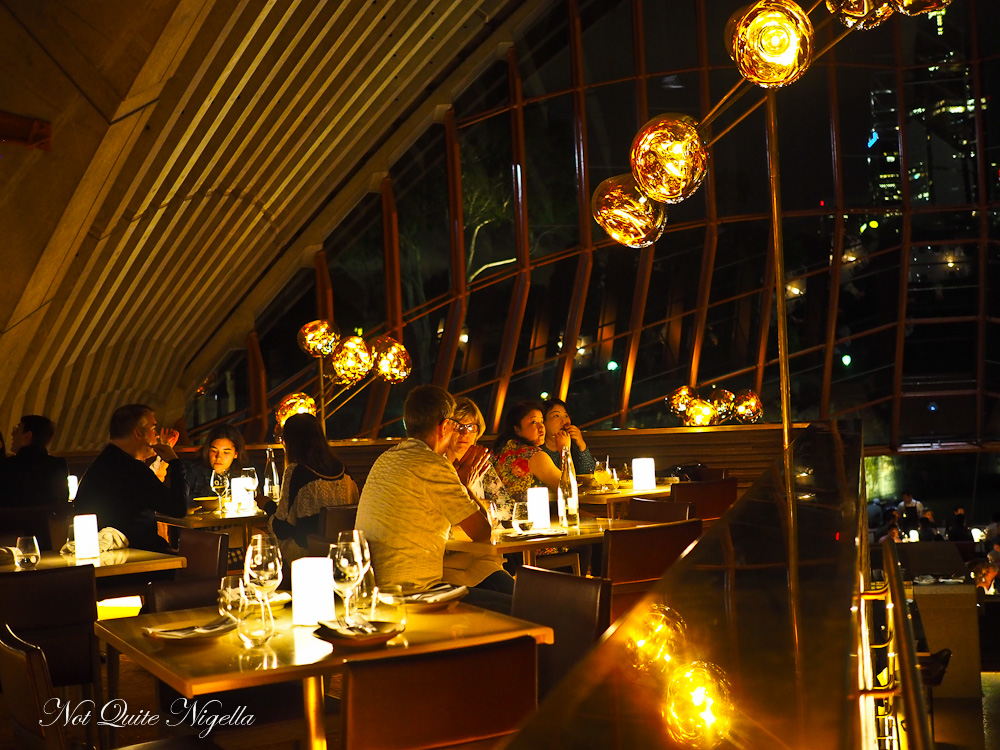 There were questions when Bennelong's bar debuted a cheese toastie for $22 but I think most people knew that it wouldn't be an ordinary toastie. Bennelong's Cured and Cultured bar has become so popular that tables have branched out onto the "circle" area and it seems every table around us is just ordering the toastie. 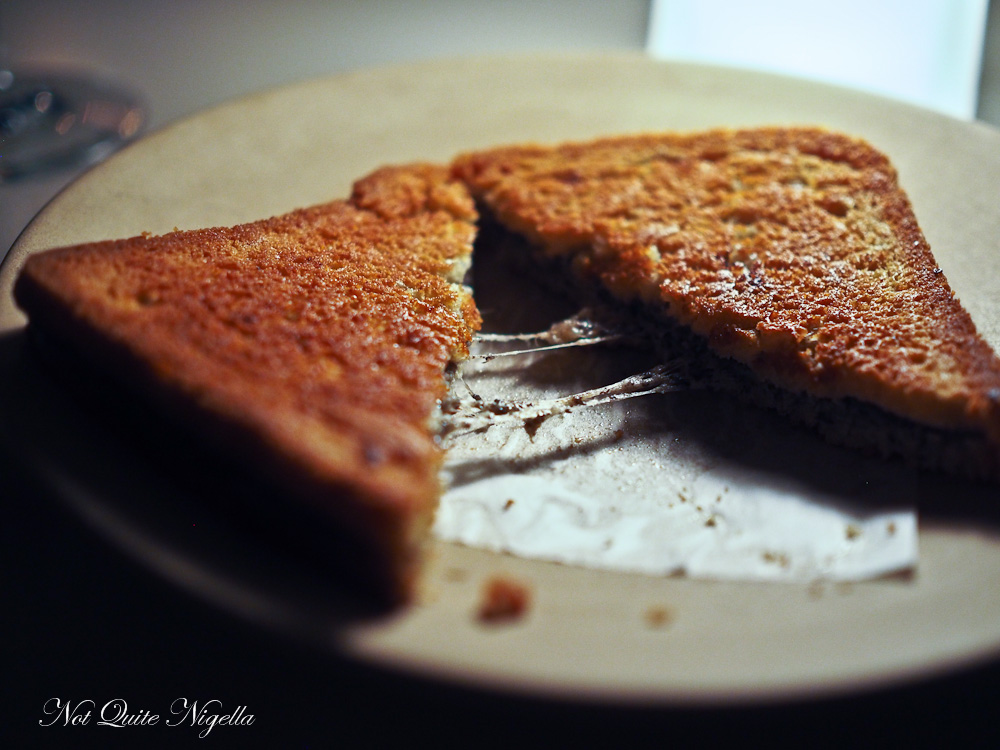 So what is the toastie made up of? Well the five cheese are Shaw River buffalo mozzarella, Heidi gruyere, Mountain Man L’Artisan washed rind, C2 raw cheddar from Bruny Island and Paesanella ricotta. These are paired with Manjimup truffles and a savoury brioche made with cultured cream and less sugar. When it arrives Belinda remarks that it looks thin. But it is rich and satisfying with enough gooey cheese factor and truffle to thrill. The bread itself is curious with almost a crumbly, fall apart texture with often just the cheese to hold it together.

So tell me Dear Reader, have you tried any of these sandwiches? Which one appealed to you the most? And would you pay $22 for the cheese toastie? And do you have a favourite sandwich place and or favourite combo? And what makes a great sandwich for you? For me, it has to start with fresh, warm bread.

Still craving sandwiches? How about these?

Burnies, Clovelly for a steak sandwich

Fine Food Store, The Rocks for a doorstep chicken sandwich

A gyro dash across Sydney for gyros

Tartine, Mascot for tartines and jaffles