Jack's Newtown (aka the Burgers That Ate Sydney)

Sometimes an eatery will unintentionally capture the culinary zeitgeist of a city. From the first few days after Jack's Newtown opened on Missenden Road, long queues have formed. There was talk that his burgers were like the much loved Shake Shack burgers from New York. Jack's menu is simple, three types of burgers, fries and shakes. But he just wants one thing from Sydney-siders... 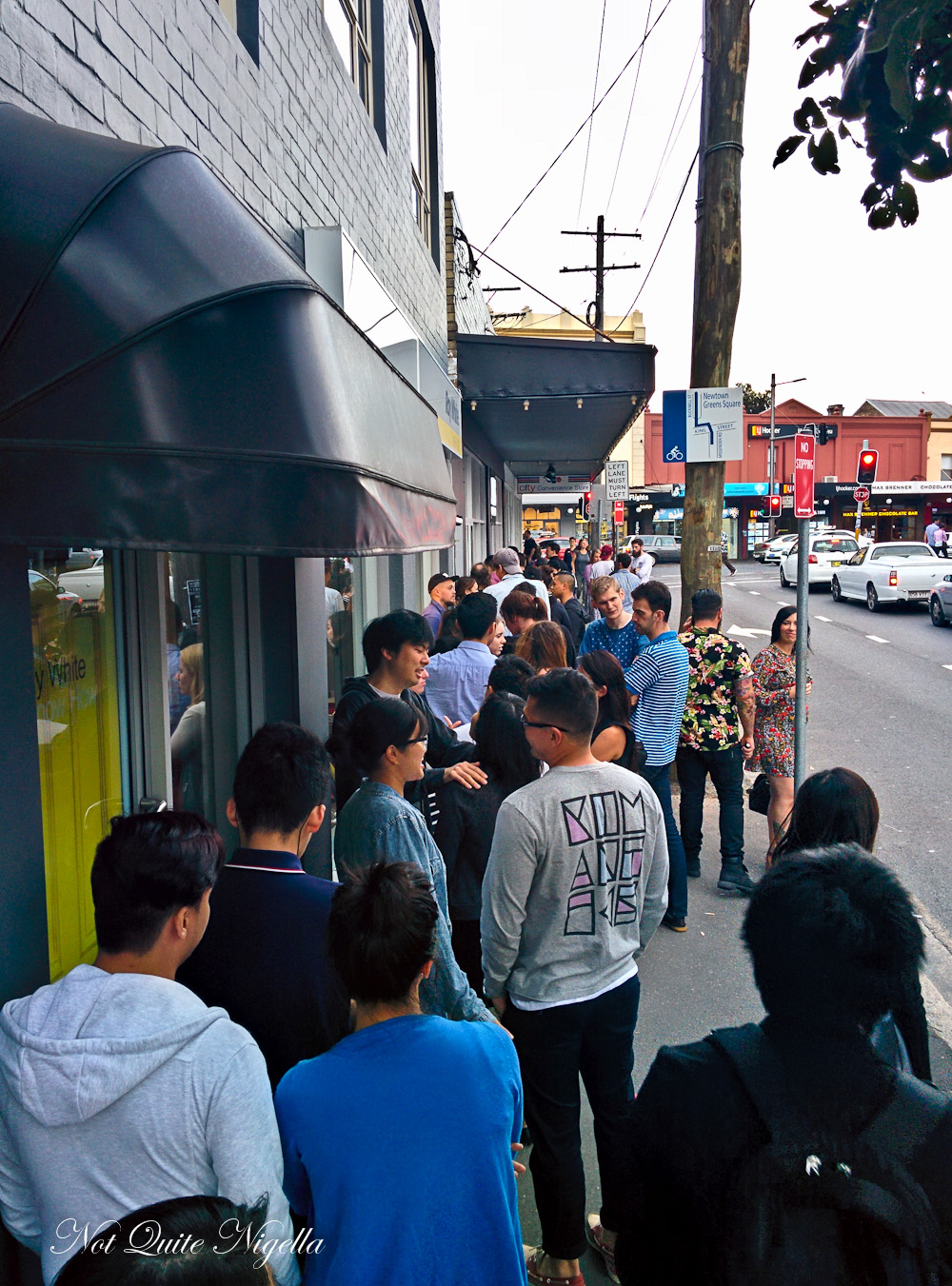 Jack Fonteyn is a man with a message. He really wants Sydney-siders eager for a taste of his burgers to wait a week or two before they visit. He's dead serious too. The payoff he says will be a better, more tested burger.

It's a Friday night and the queue for burgers at Jack's Newtown lasts about an hour. Mr NQN and I arrive at 6:45pm and burger and Shake Shack enthusiast Nick arrives at 7:15pm. Nick had hopes of just gliding into a seat, taking an Instagram shot of his watch and a burger and then chowing down on a burger. 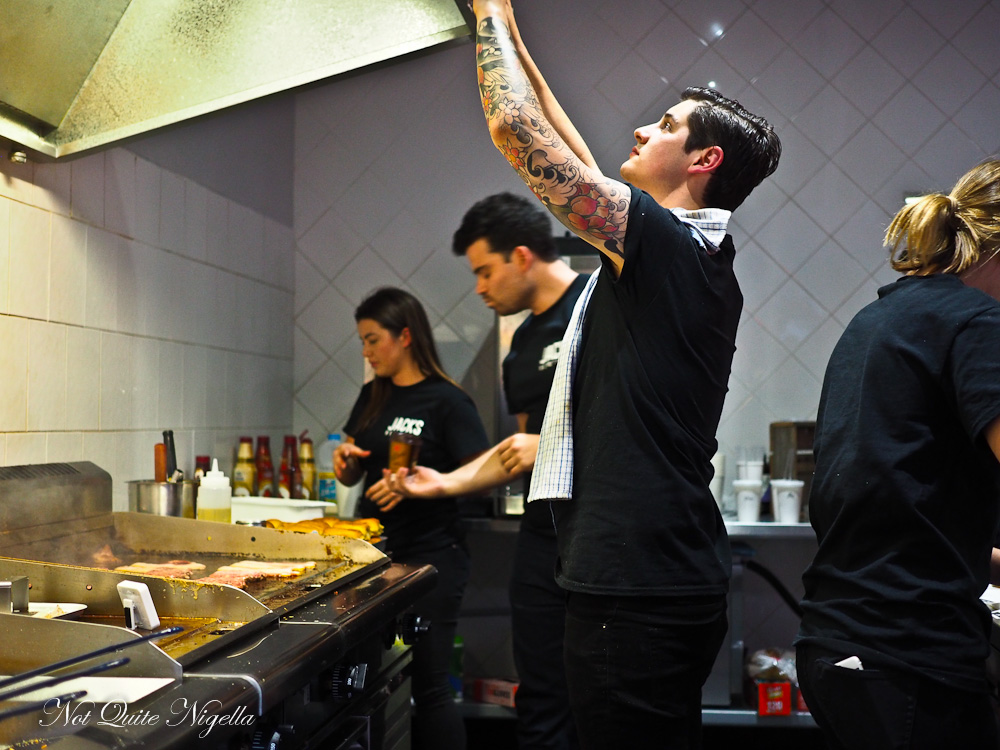 Jack's Newtown had been open for just 10 days and already it has caused a sensation. After a write up proclaiming it to be Sydney's answer to Shake Shack people queued and queued and queued. Some left, like the six people behind us vowing only to return when the lines subsided. For Jack Fonteyn, the article was almost like a curse with a bit of a blessing on the side too. They hadn't anticipated the queues and the processes had not been ironed out. They were not ready for the crowds. "We weren't expecting this," says Jack. Indeed there was no PR agency, famous friends or favours in Jack's first food endeavour and if anything, he seems genuinely perplexed by the place's rapid trajectory as well as mindful of inflated expectations when people queue for an hour. 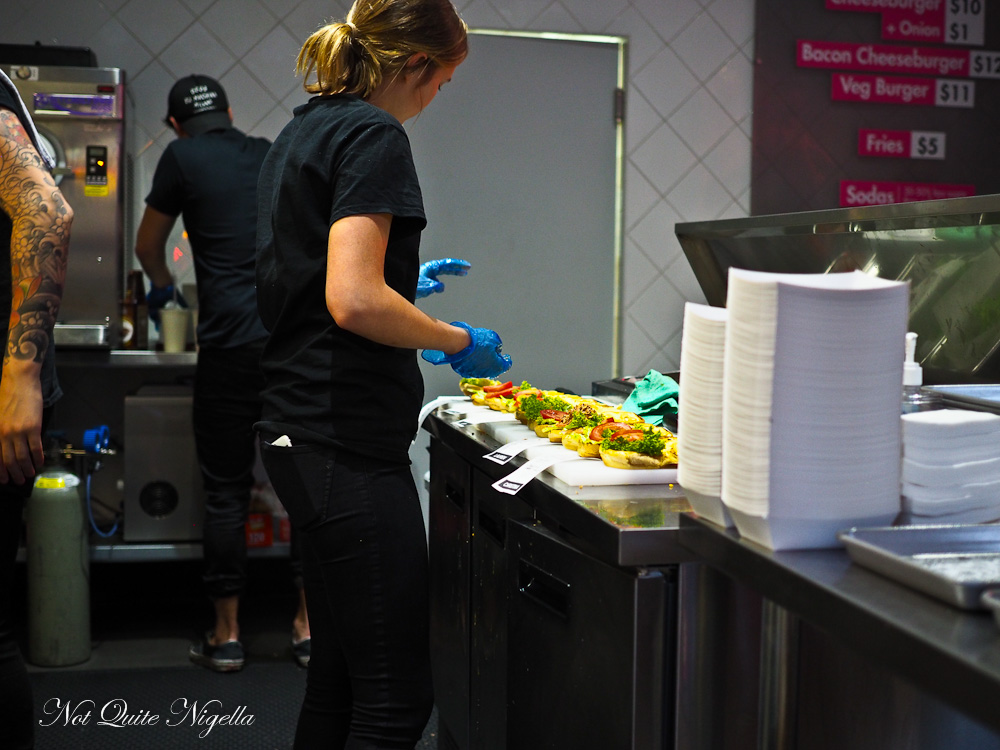 60 minutes into the line we reach the front of the queue. People can eat in or take away and the menu has three burgers on offer: cheeseburger (with onion), bacon cheeseburger or vegetarian burger. There are fries and shakes and sodas and an item called a concrete (the latter not available yet). 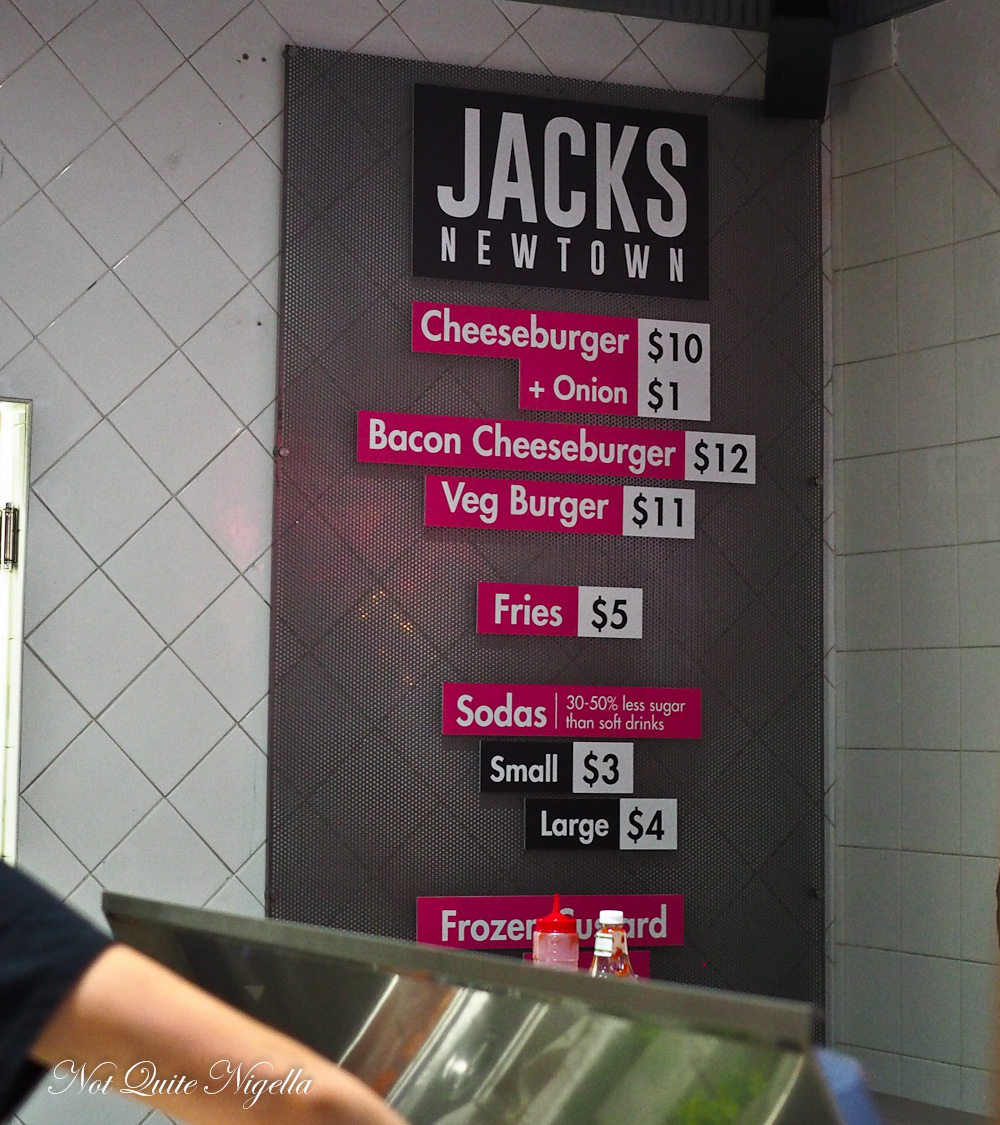 The boys are hungry so it's two of each type of cheeseburger and one vegetarian burger and a double serve of crinkle cut fries. We ask about the shakes and they come in chocolate, vanilla, strawberry, caramel and pistachio. We ask for a recommendation and Jack, who is behind the counter taking orders offers to give us a sample to try which is very nice. It's an Italian pistachio syrup so we go for that an a caramel shake. We order and Jack physically takes the dockets to the chef at the griddle in an effort to slow down the pace and we wait our turn for our burgers which is another 10 minutes or so. 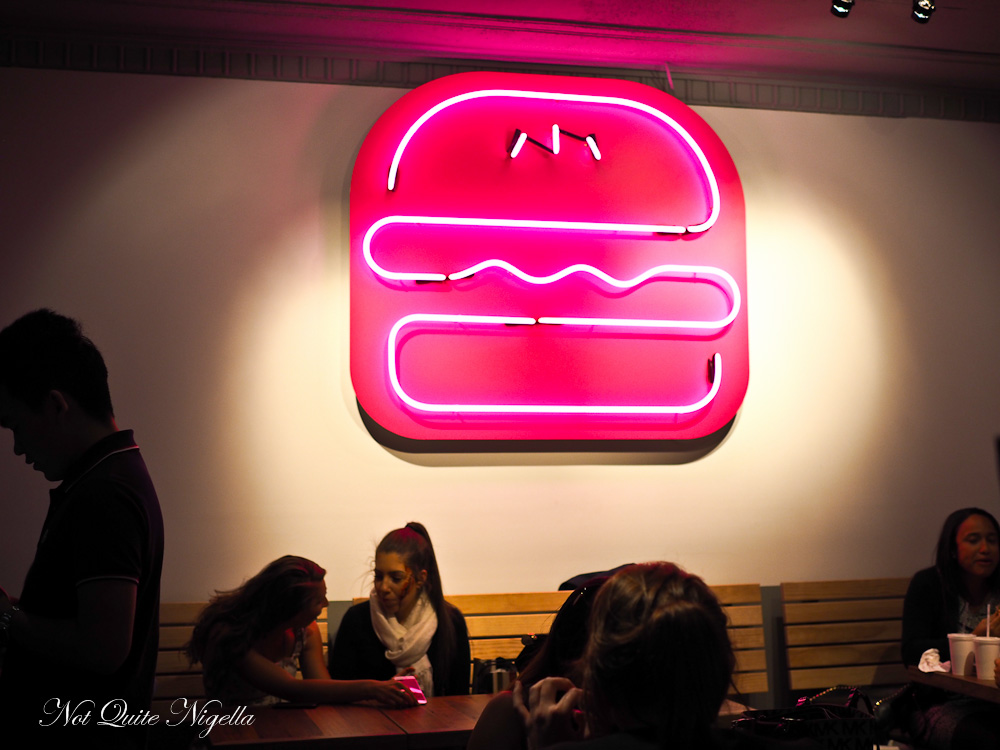 Mr NQN has been assigned seat duty and he had found two friends Dianne and Felix who he sits chatting with. It's lucky that the dine-in area has enough seats because I don't think we could have dealt with another delay eating our food. "Rick!!" they call out meaning Nick and they slide our silver trays across. We take them to the window seats where curious passersbys blatantly stare at our food trying to reconcile the ever growing queue with what we are eating. 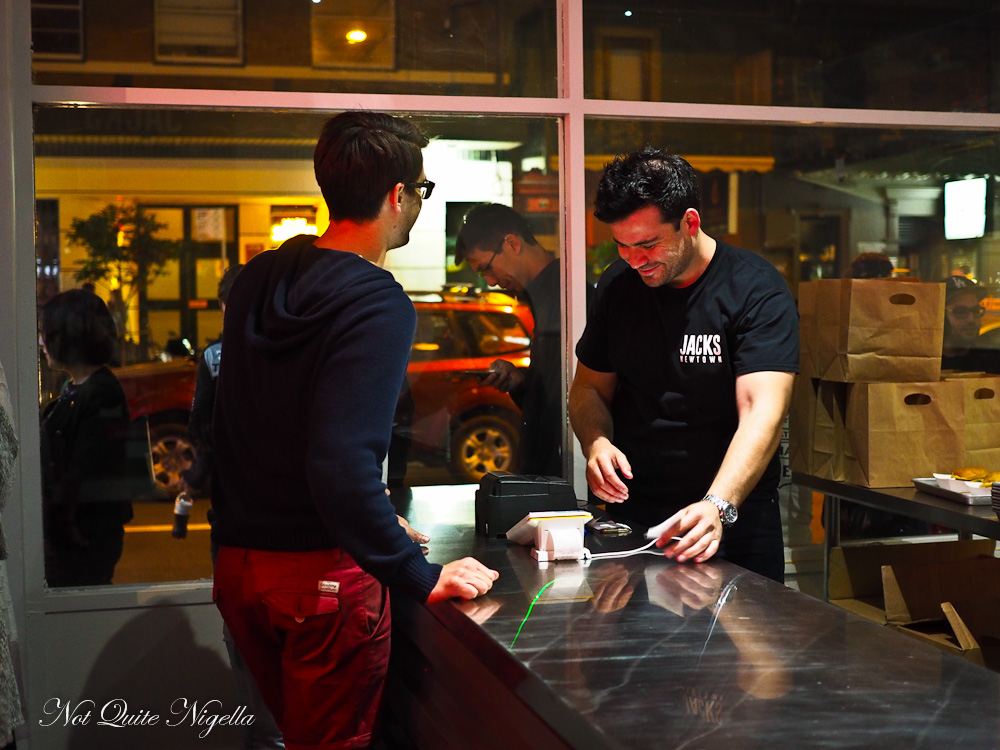 Nick helps out with the photographs. "Look sis, go for this angle..." he says pointing at a direction. "You sound like a p*rn director," I comment and he obliges with an "Arch your back," command to the burger. He touches the buns. "They seem semi caressed and soft," he says to much eye rolling. 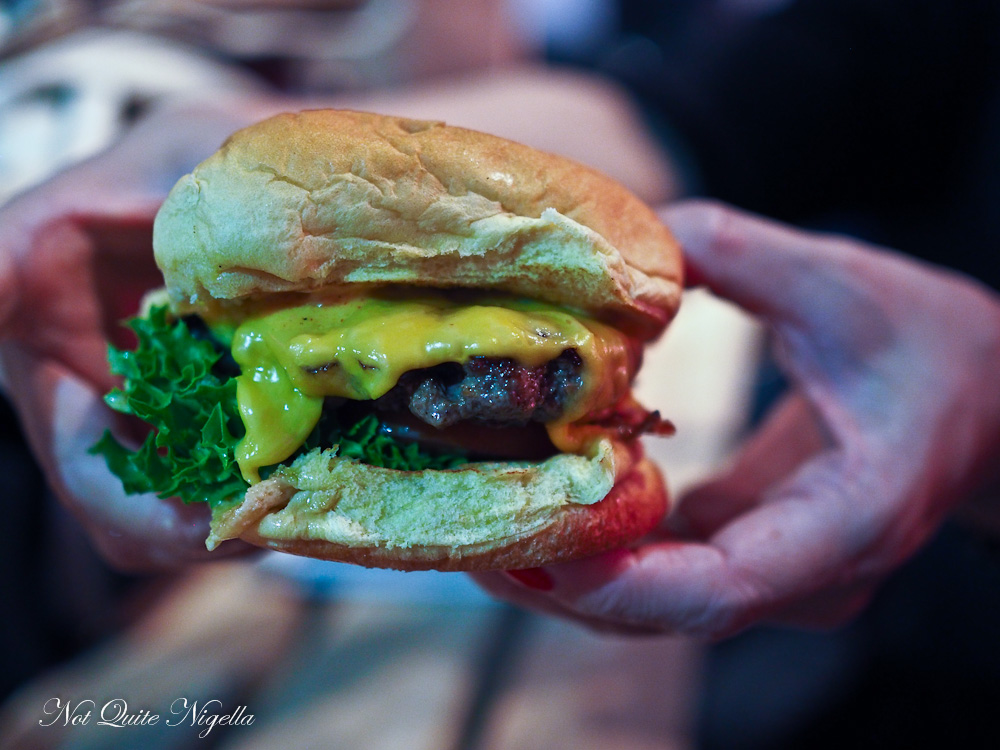 Cheeseburger with onion $11 ($10 without onion)

So what are the burgers like? And the million dollar question, are they like Shake Shack? Starting with the regular cheeseburger. I like this burger a lot. It's got a soft bun, great patty, melty cheese and the right amount of salad and sauce. Is it like Shake Shack? Well it does look just like a Shake Shack burger but it's tough to expect them to be making Shake Shack burgers just ten days in. But it could definitely could get there. 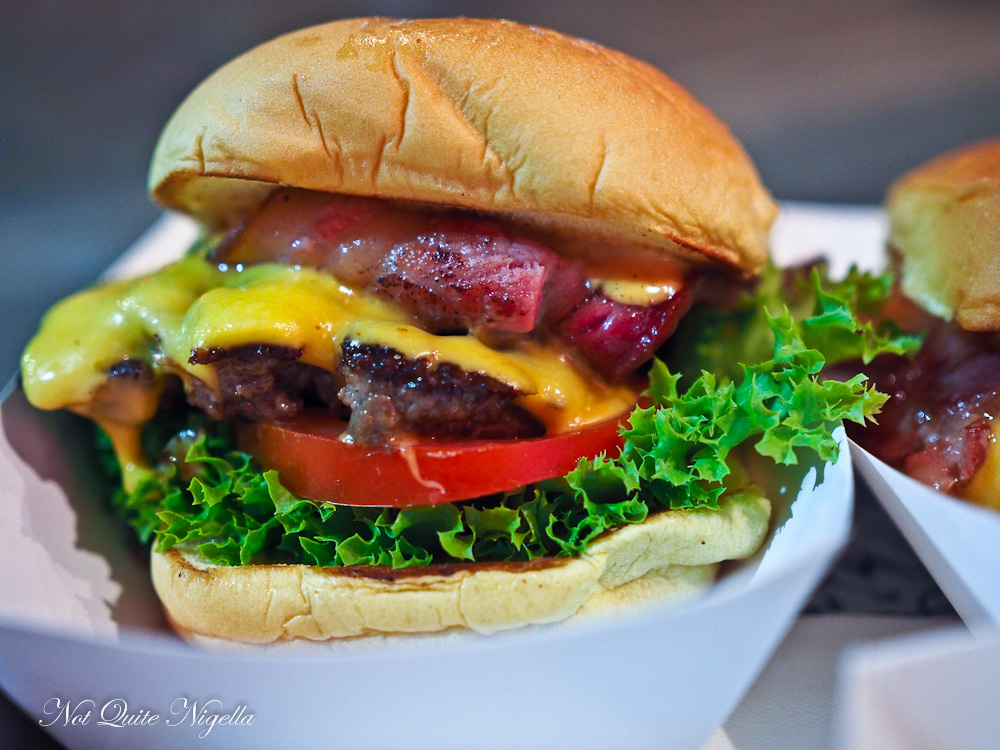 The bacon cheeseburger does however seem to be more popular just from doing a cursory poll around us. This one is much oilier due really to the bacon. Mr NQN notes that the bacon could be less fatty, more like American style streaky bacon and he's probably right as the grease does end up soaking some of the bottom patty. I do like the smokiness of the bacon though. And Jack says that they are rethinking the bacon to make it thinner and crispier. 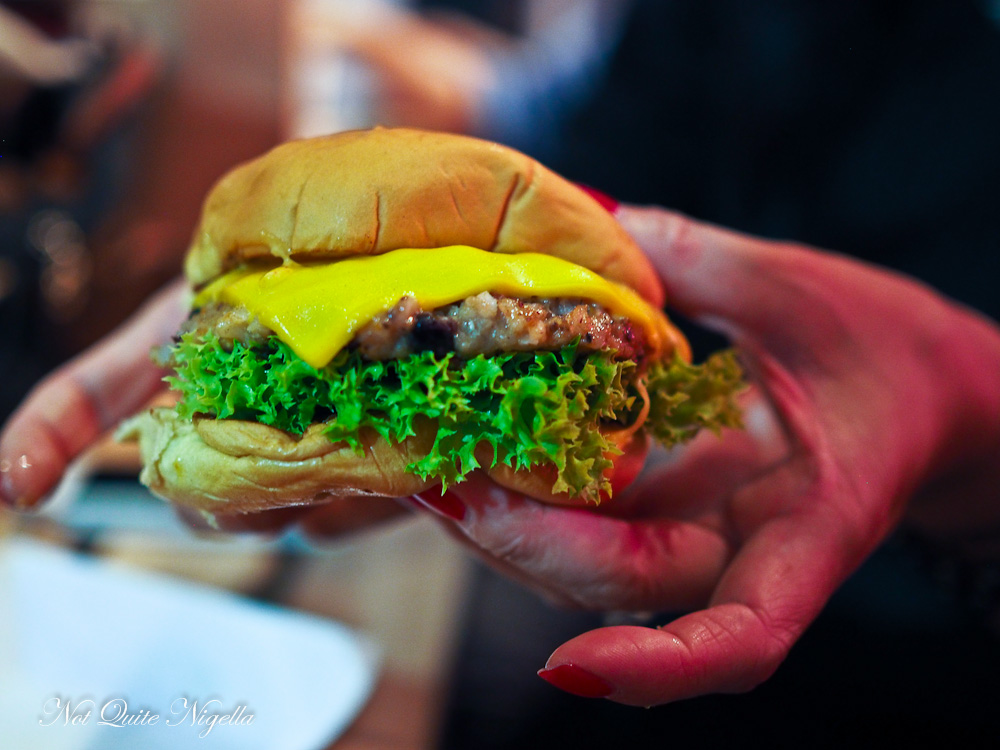 And the vegetarian burger is a soft patty with black beans. Mr NQN is a fan of this but for me, despite W.H.O. warnings, I prefer the beef burgers. 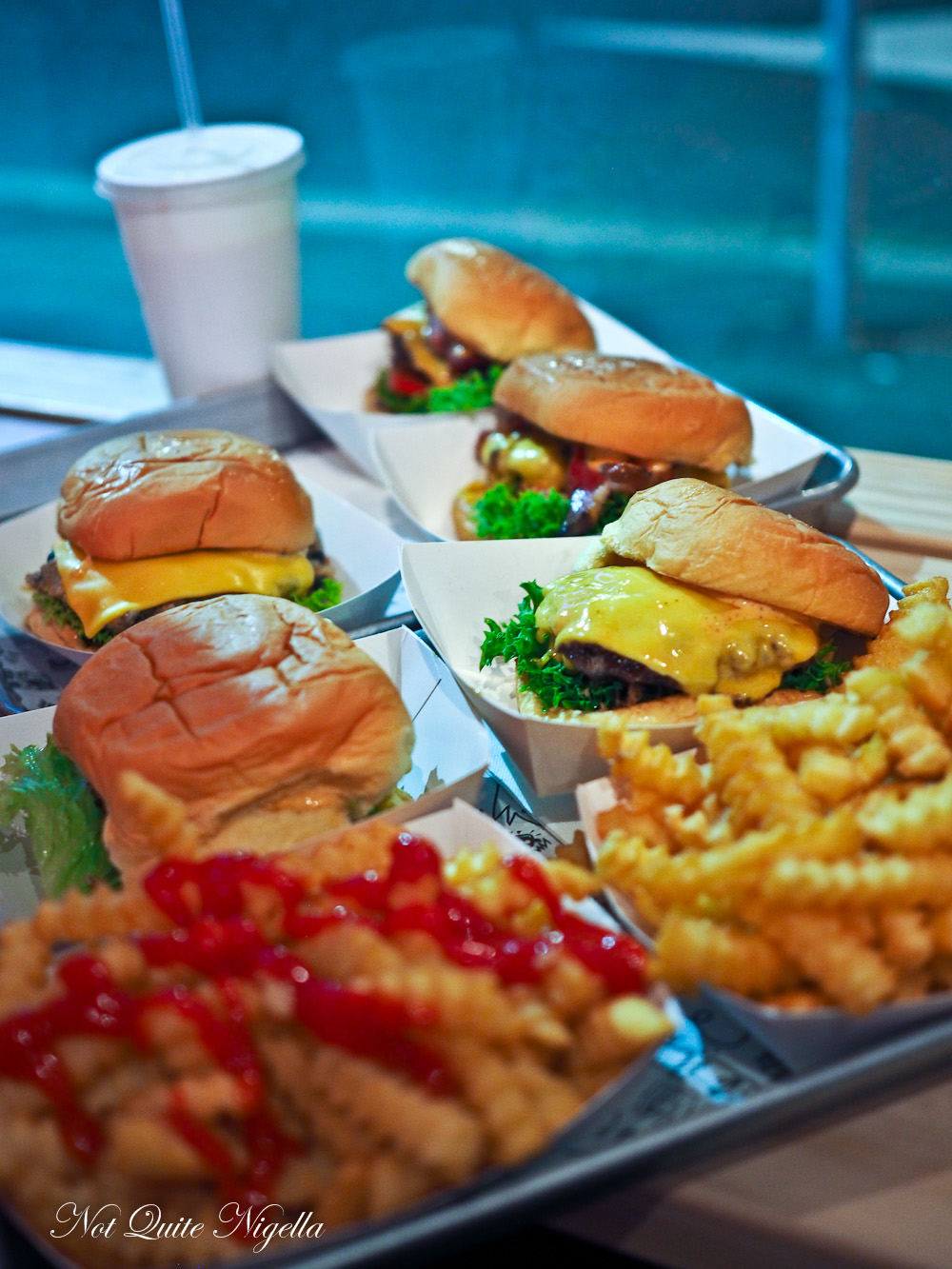 The crinkle cut chips are excellent-cooked and seasoned to perfection really and they don't really need the tomato sauce on them. If you need it, it's best to just squeeze some into a cup because the chips are simply seasoned with salt and nothing needs to be added to it.

The caramel shake is really good, nice and creamy without leaving a film on the tongue. The pistachio flavour is mostly concentrated at the bottom of the cup reminding us all of pistachio kulfi. 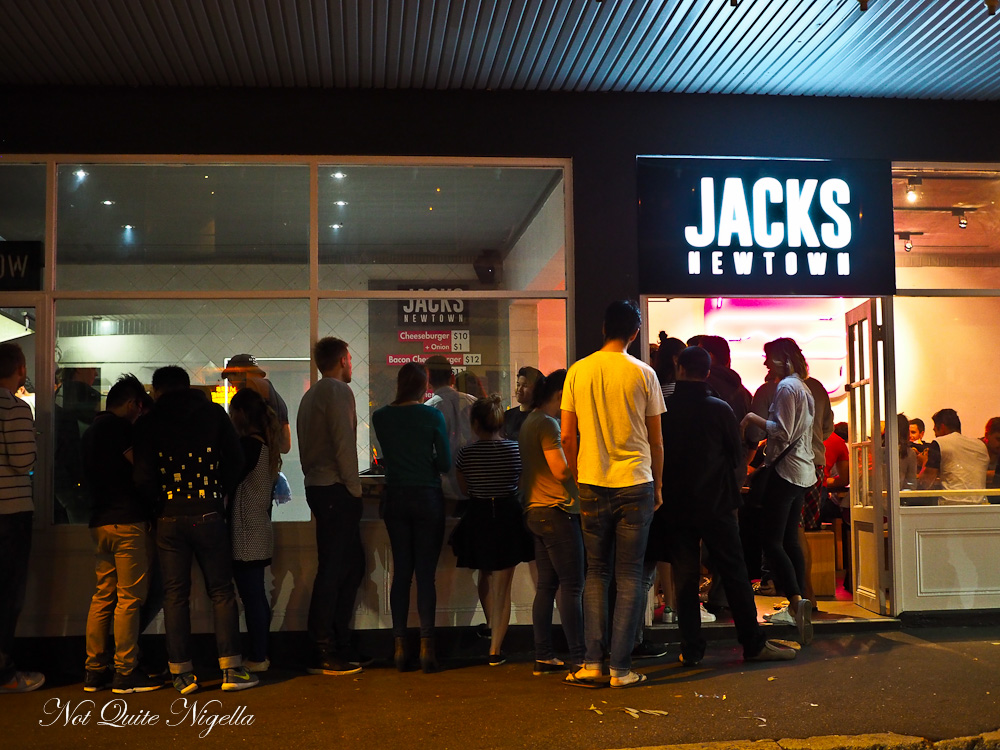 It's two hours after when we first lined up and our parking is up so we get up to leave knowing that our table will be taken up soon. As for Jack, we leave him while still deep in customers with a large crowd still snaking down the street and clustered by the door.

So tell me Dear Reader, do you try to get to places when they first open? And how long would you wait for a burger? Have you tried Jack's burgers or Shake Shack burgers? What are your thoughts?