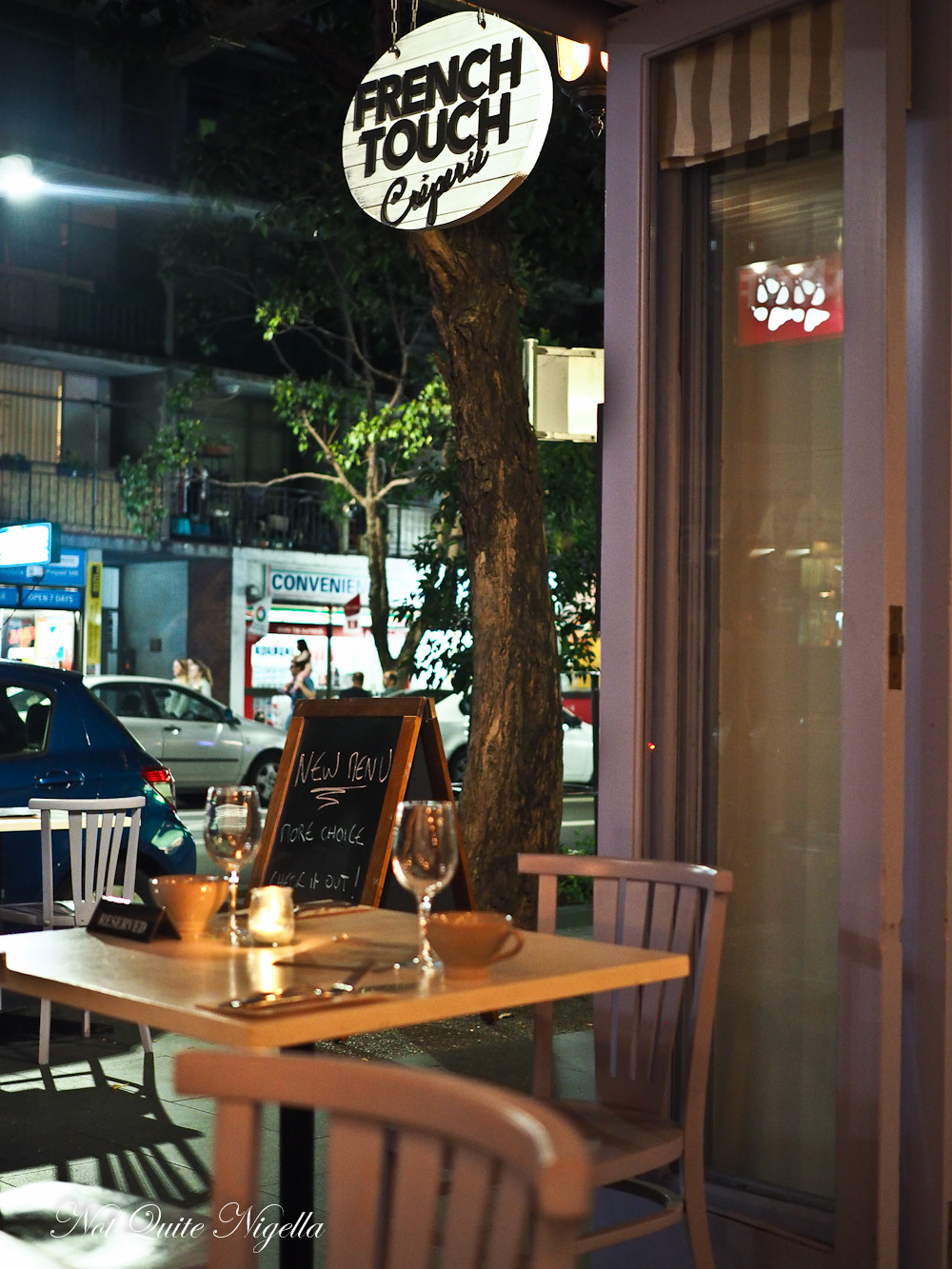 When is a coffee or tea cup not a tea cup? When you're at a French creperie where they do not hold coffee or tea but instead cider! These ceramic boules are the traditional way that the French serve cider at creperies. It's a Friday night and Mr NQN and I have a rare date alone on Surry Hills' Crown Street. It's the beginning of spring and the weather is proving co-oprative. French Touch Creperie's French style doors are open and the passing food and car traffic on the busy street passes by. 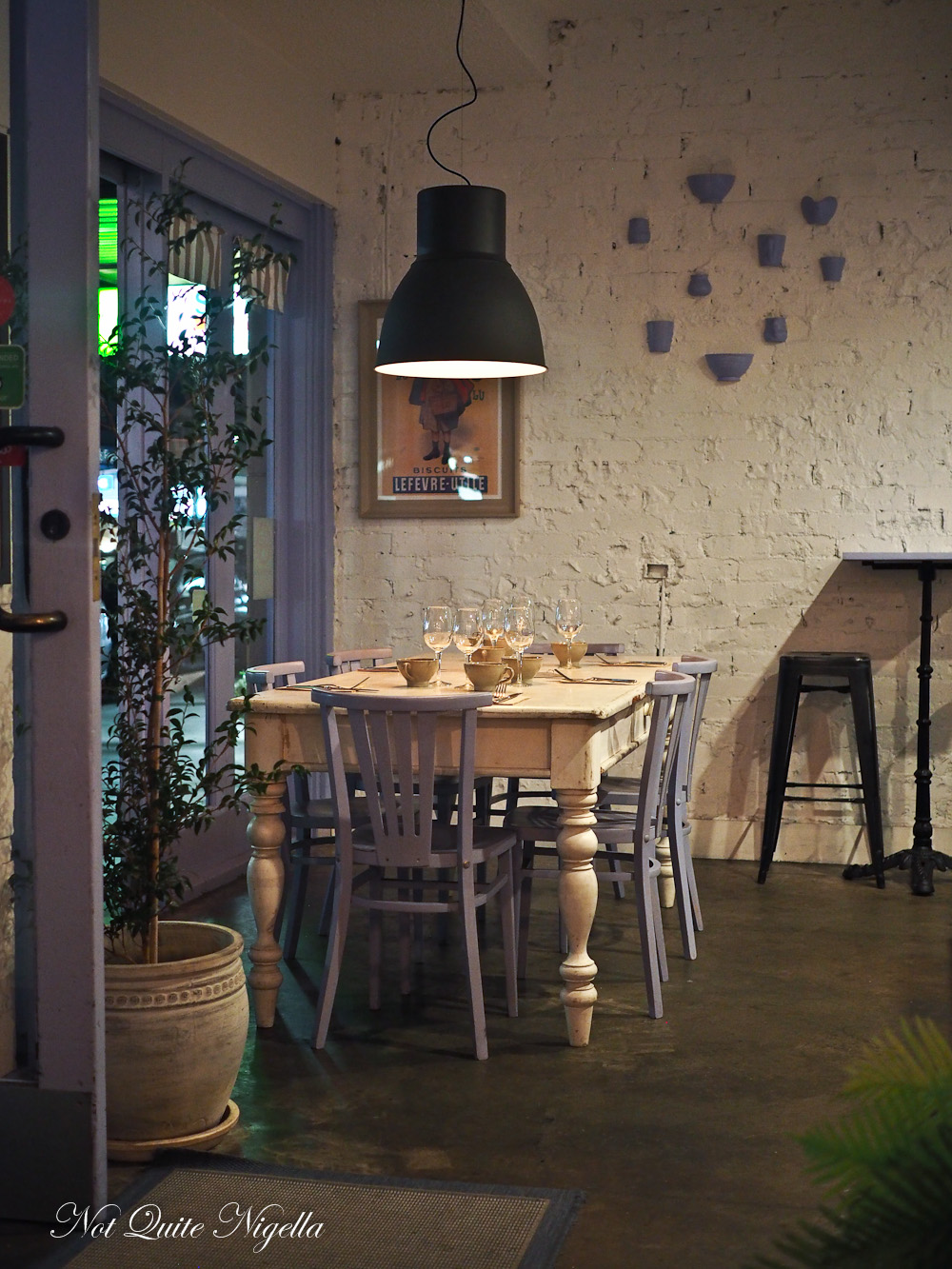 The decor at this surprisingly spacious cafe is French countryhouse design with lots of washed white tables and chairs. Framed pictures of Saint Nectaire and foie grass geese line the walls and the staff wearstriped navy tops, berets and red kerchiefs around their neck. 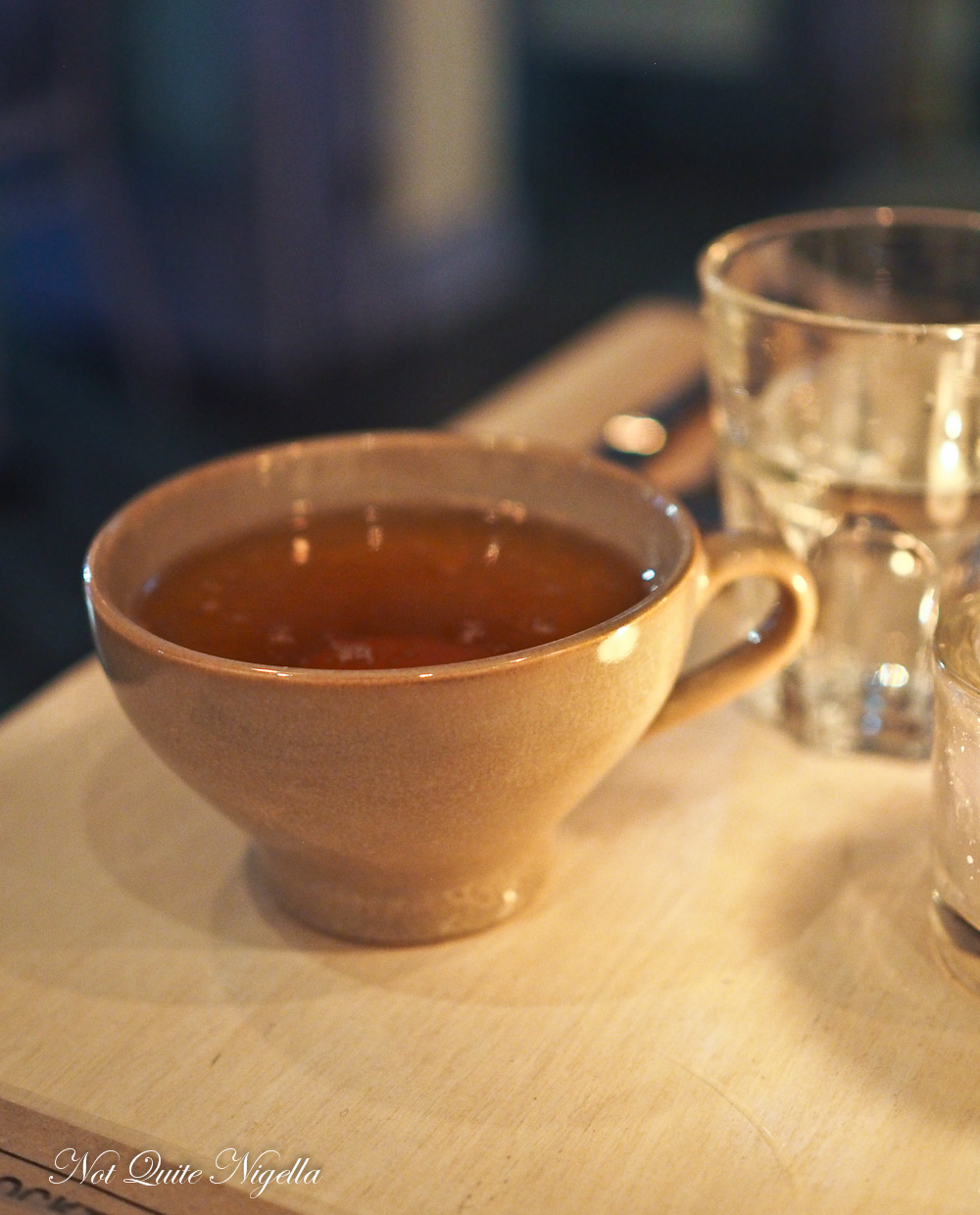 The menu isn't just crepes, there is charcuterie and duck confit but I'm a big crepe fan so I tend to go for those. Mr NQN orders a French pear cider and they pour it in the wide ceramic cup. Other ciders are sold by the bottle but this is sold per 250ml cup serve. Galettes are savoury crepes made with gluten free buckwheat while the savoury crepes are made from wheat flour. 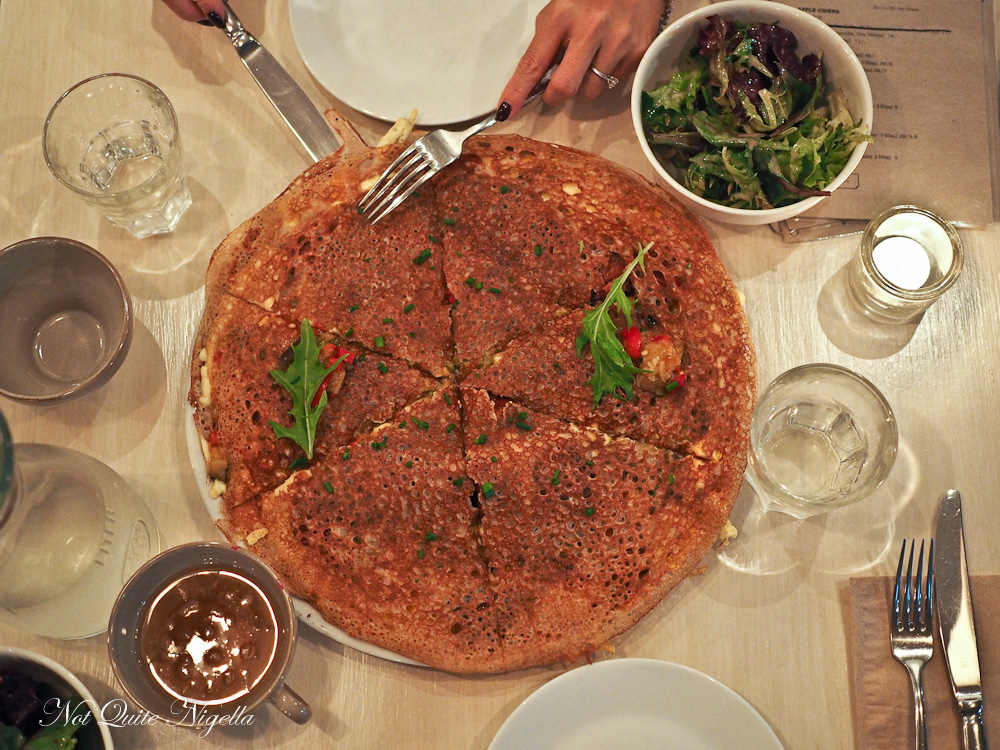 French Touch serve a carousel crepe. This is a flat crepe that is topped with filling and then sandwiched with another crepe and served like a pizza in slices. We go for the Oh Bonne Mere with chorizo, homemade ratatouille, free range egg and Swiss cheese. It needs a little seasoning or spice as the chorizo is very mild and some salt or pepper on the table would have been nice. Because of the ratatouille it is a little soft and there aren't any of those lovely crispy edges. 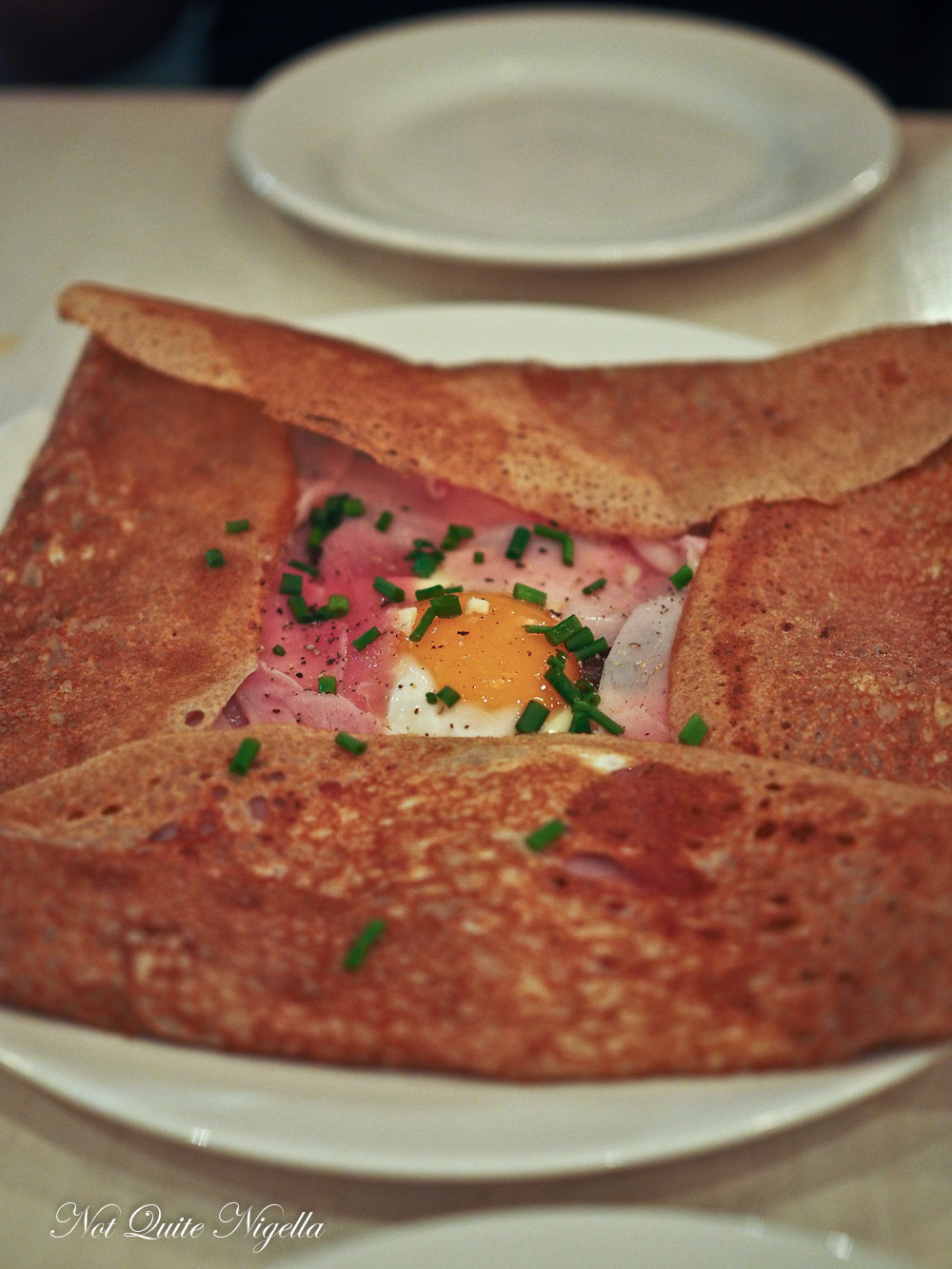 We both prefer the La Parisienne, apparently what most of the French customers order. It is a thinly sliced double smoked ham, mushrooms, Swiss cheese with a free range egg and soft yolk in the centre. This is satisfying and well seasoned and the buckwheat crepe has a good crispy edge to it. 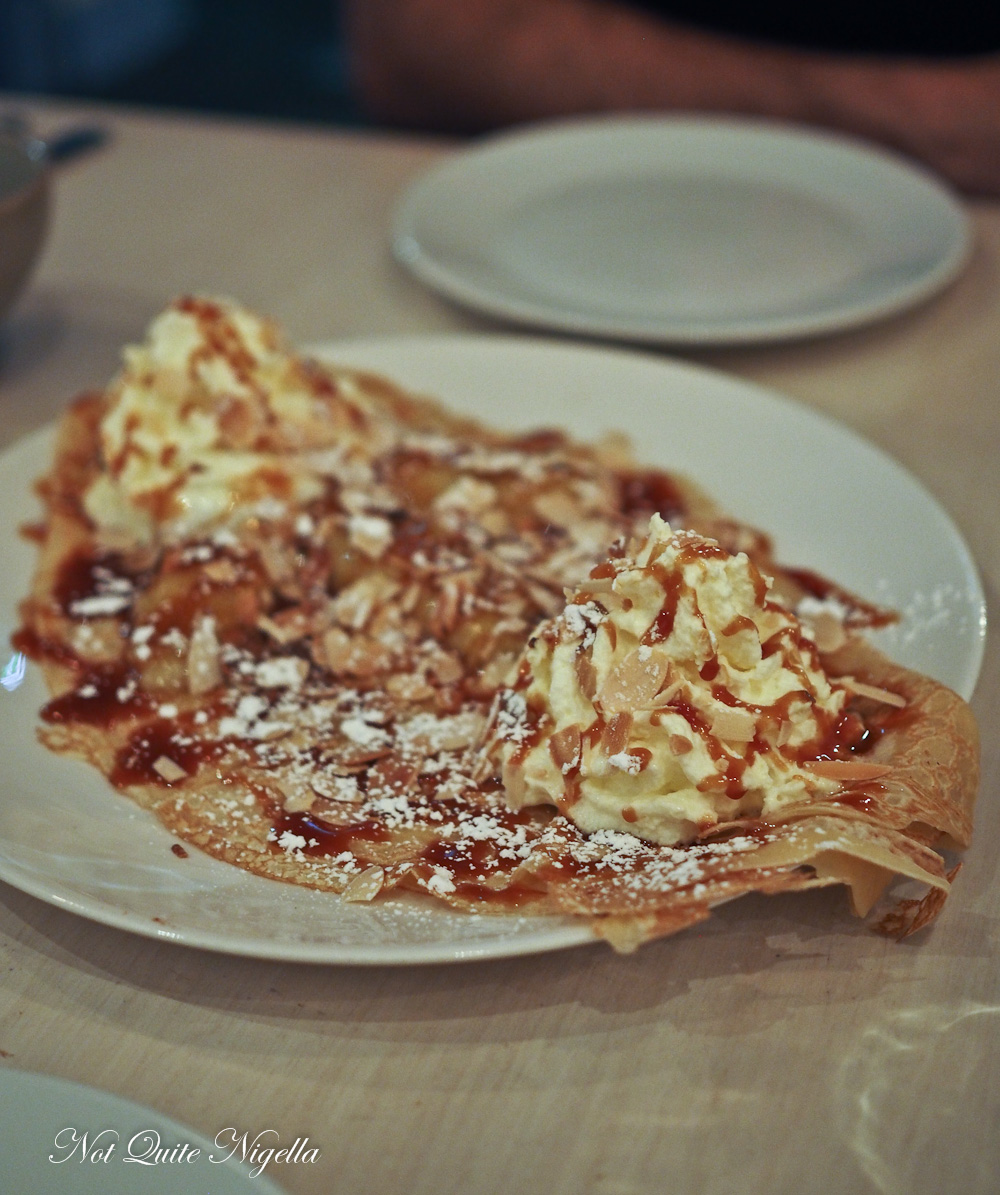 Mr NQN's pick for a sweet crepe is the La Bananarama (which starts the song "Robert De Niro's Waiting" in my head. It is made up of caramelized banana, homemade salted caramel, homemade Chantilly cream and grilled flaked almonds. The banana is buttery soft and it's a great combination of flavours. 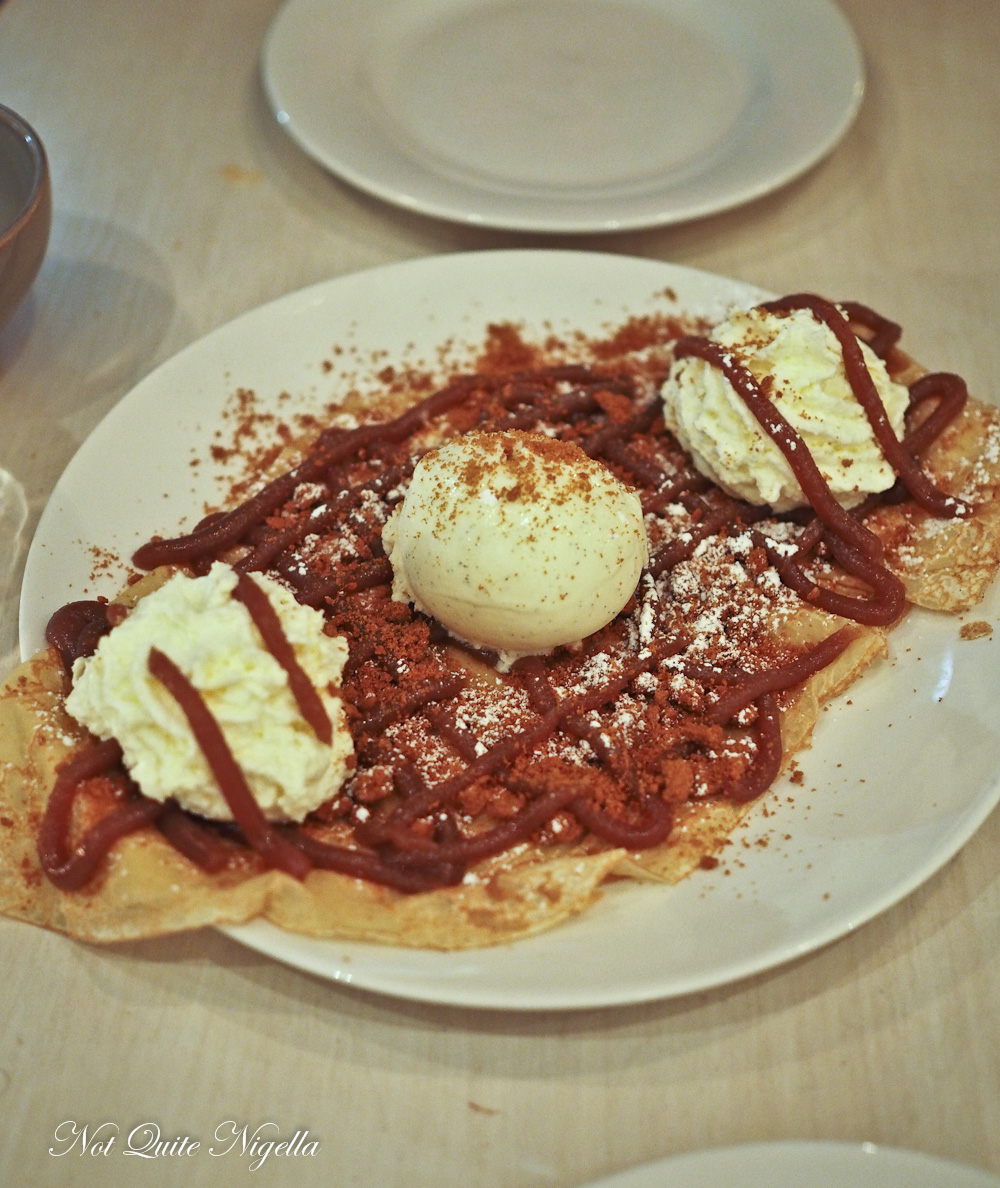 I am rather obsessed with Mont Blanc crepes, the sweet crepes with a mountain of sweetened chestnut puree and whipped Chantilly cream. This goes one better with chestnut purée, vanilla ice cream, homemade chantilly and speculoos crumbs. The crumbs are aromatic with spices and form large rubbles of chunks. They do take over the subtle flavour of the chestnut but it's a great idea to add to the crepe.

So tell me Dear Reader, have you ever drunk cider out of a cup? And when you hear names does a song pop in your head? 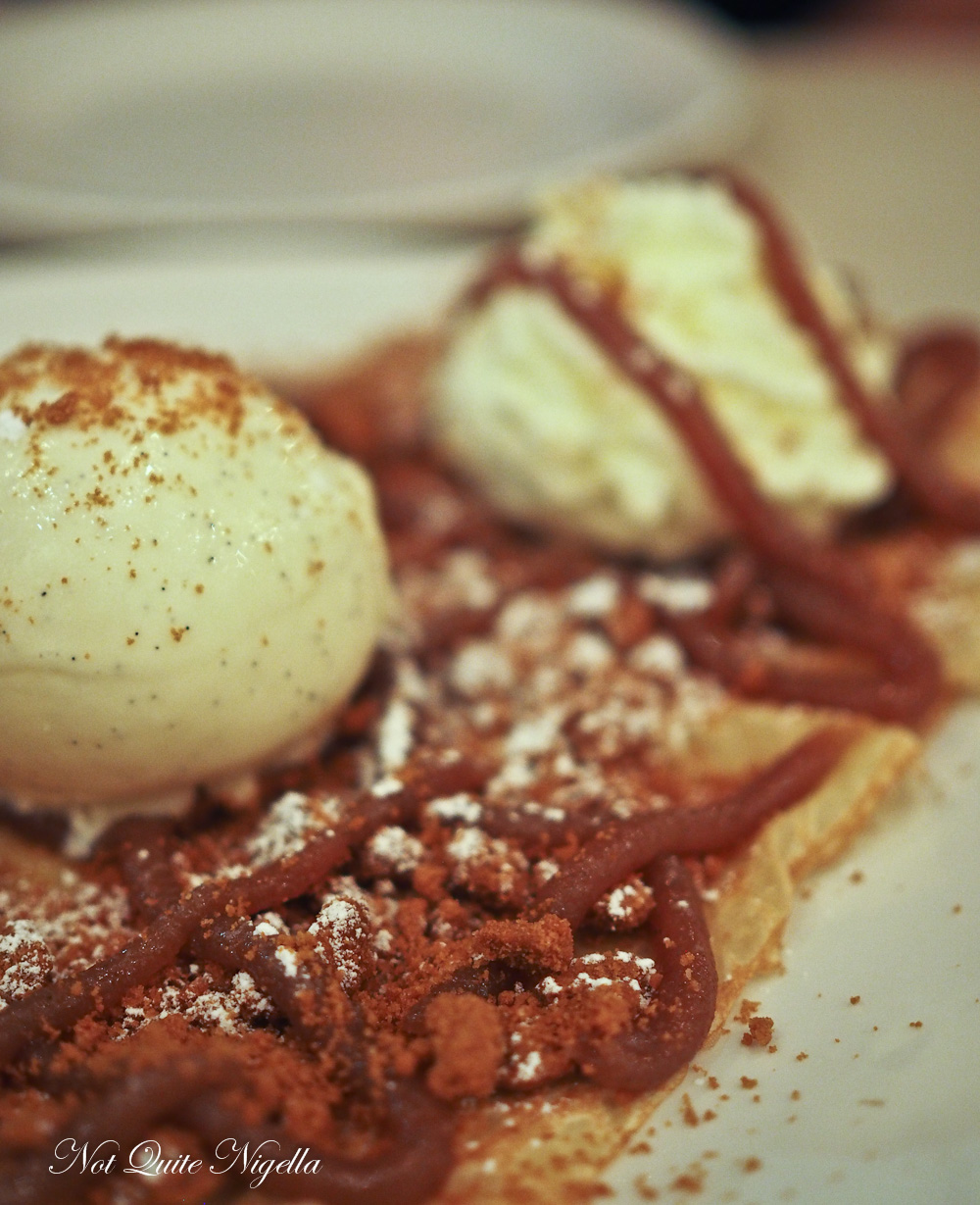