To Ramen and Back: Salaryman, Surry Hills 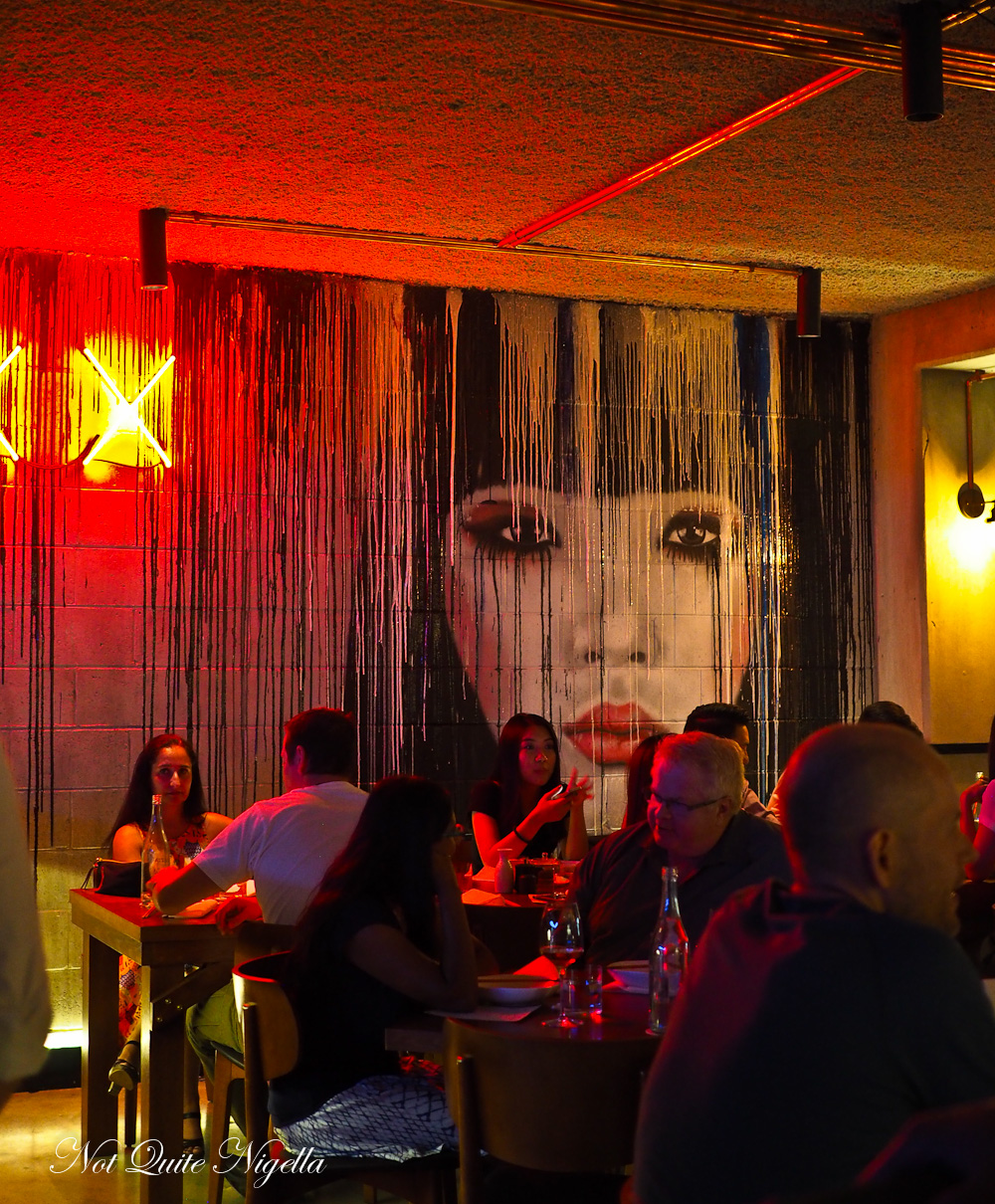 The concept of a Salaryman in Japan is based on one of the many drone workers who populate the city colouring it various shades of grey from their suits. They work hard, they party hard and they go out drinking all night only to catch the train home and fall asleep and do the same the next day. It's the concept of this hard working hard partying worker and the synergy with chef life that inspired Flying Fish's Stephen Seckold for his newest venture Salaryman, located on Albion Street in Surry Hills.

"I remember my first trip there (to Japan) and I was sitting on a train and this guys gets on and he's just immaculate in this immaculate suit...On a trip to Nagano to Tokyo for three hours he proceeded to sit there and look completely composed and then drink seven beers. I kind of see a bit of synergy there with chefs. We work ridiculous hours but we still find time to knock off work and then consume copious amount of alcohol and then come back to work the next morning and then push on and then put on a show for the guest again and I think the salaryman thing is not so Japanese-y, it's more cheffy to me. It's very hospitality based," explains Stephen. 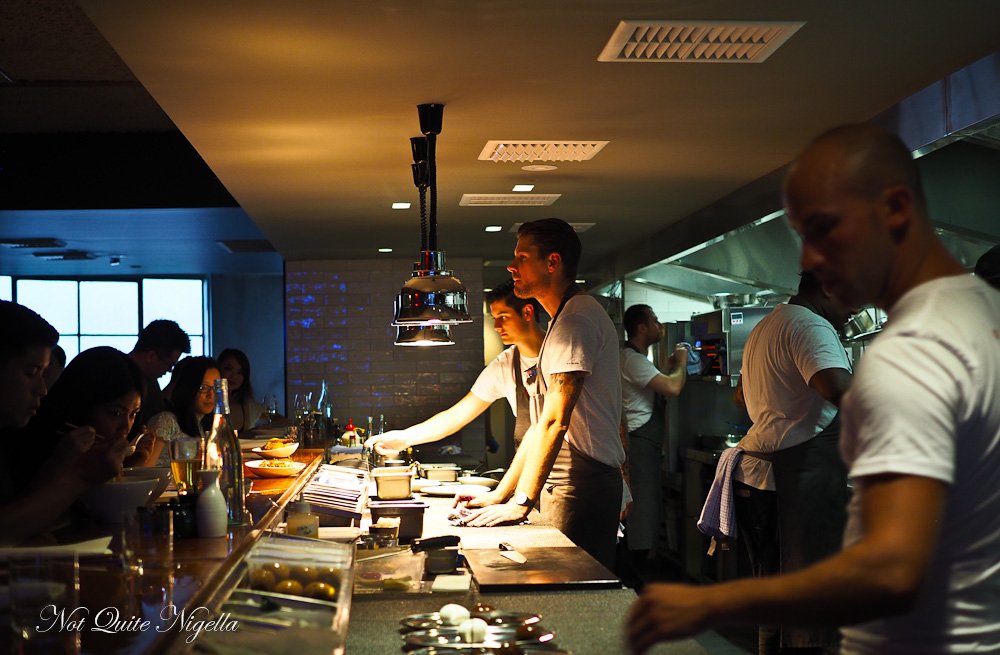 The space located on Albion Street at the Central Station end is very sleek, dark, futuristic Tokyo. There's a bar on the left and the main open kitchen on the right. The prize spot is really at the bar overlooking the chefs preparing the food although these seats can't be bookedand you'll have to try your luck. On one wall is "Pandora" a lush lipped beauty partially obscured behind paint drips. But don't go expecting a casual, cheap and cheerful ramen-ya. It's a fusion ramen bar with high end service and technique.

It is also a chance for him to create something of his own. Stephen says, "Flying Fish for me was always like I had inherited Peter's restaurant. I just felt like, even today after about six years of Peter not being there I still have people walking through the door asking where Peter is. When you put that sort of time into it and people still seeing you as the secondary sort of chef I guess Salaryman was my chance to be my own chef."

I'm dining with the JY aka the Black Widow (remember the tiny gal who demolished 5 rolls?) who is wearing a dress where a button can be undone if need be and her boyfriend Ben who is for all intents and purposes, a Salaryman. 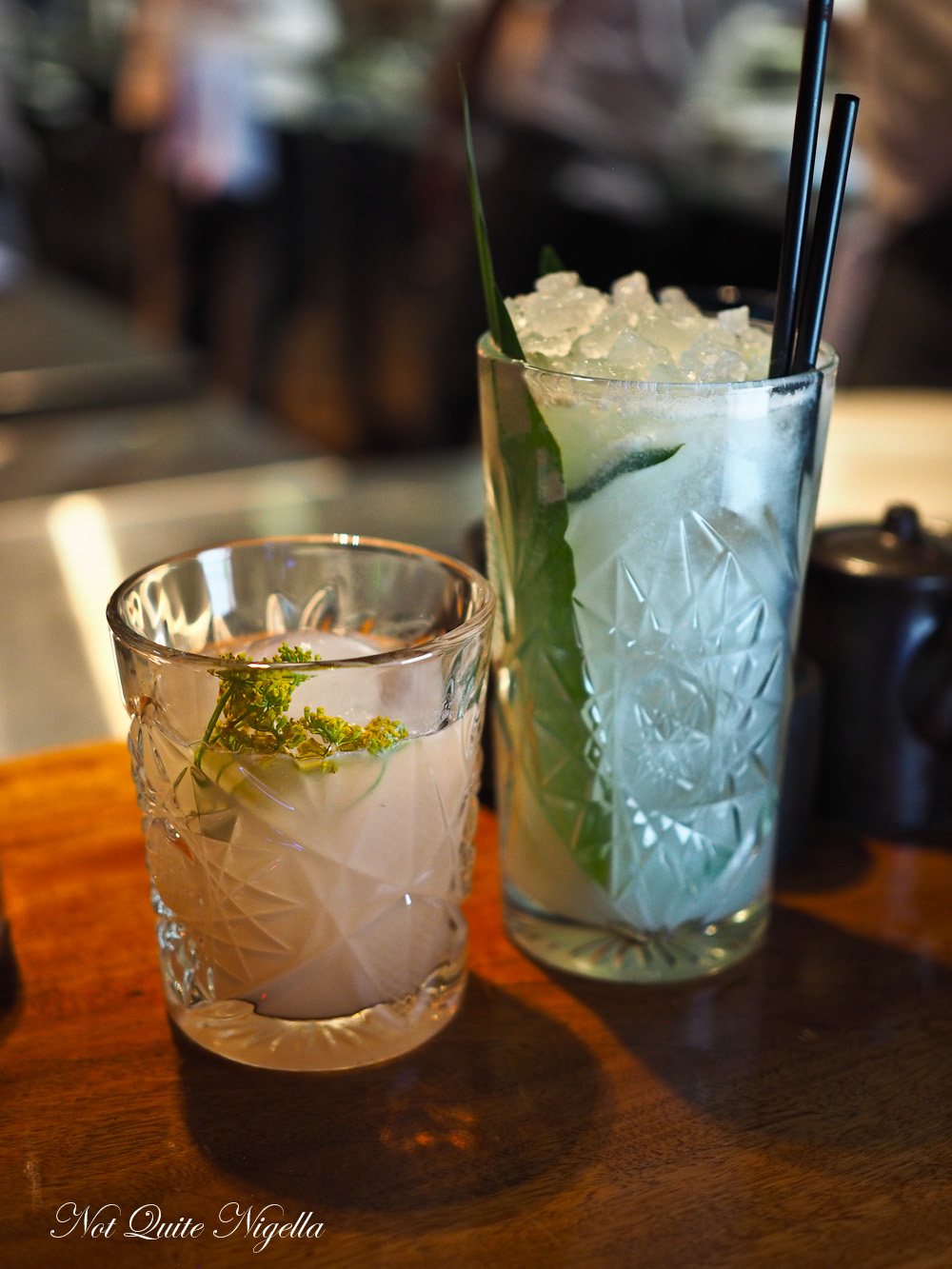 But first: cocktails! There are several original creations devised by bartender Marzio Lanzini the former pastry chef at Flying Fish that has now turned his skills towards mixology. Out of the choices I'm most intrigued by the cocktail made with artichoke syrup called "When in Rome". The cocktail itself is pretty and perfectly balanced with flavours of artichoke gin, mint, lemon and artichoke syrup with a hand chipped ice ball. Marzio applies the same principles of dessert to the cocktails with everything being made fresh from scratch from juices to the spirit infusions. 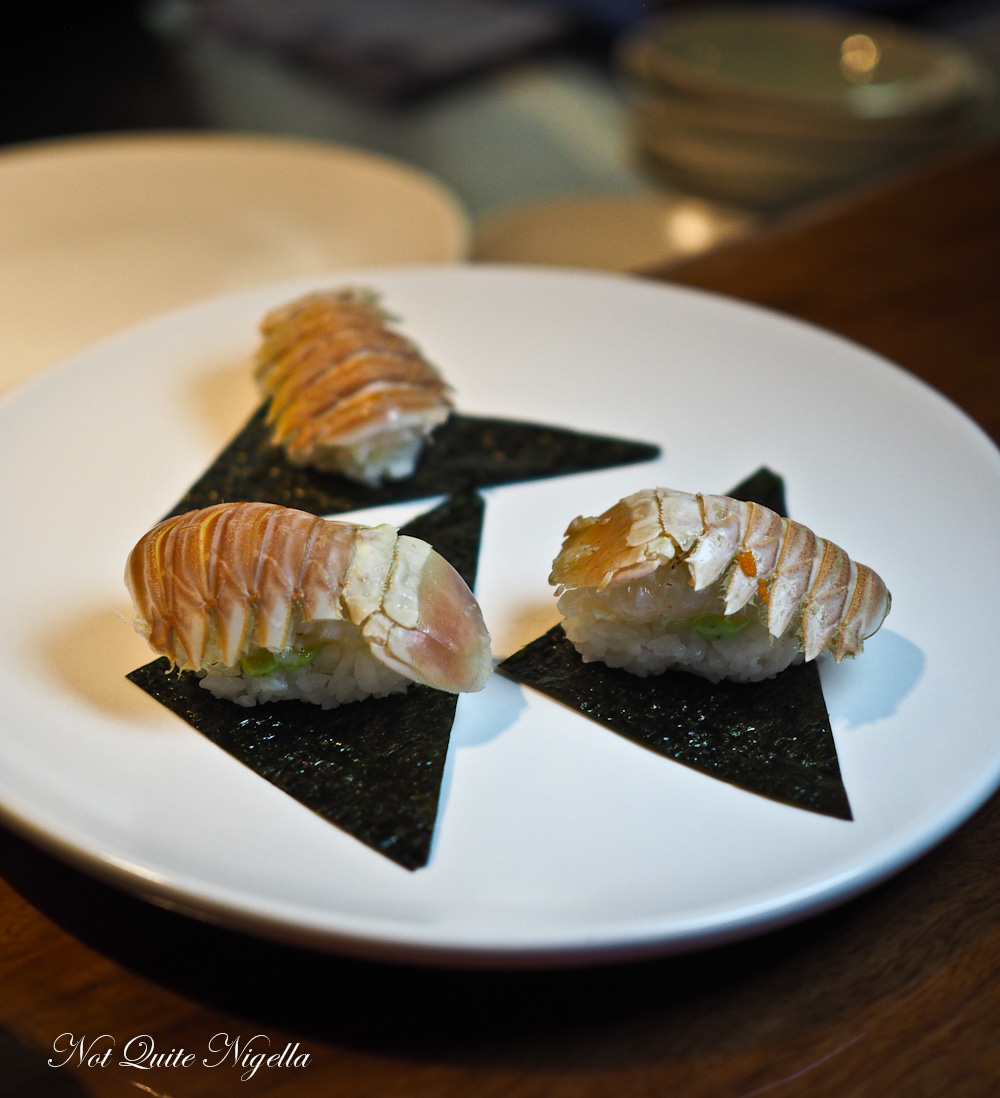 The food comes out quickly. Our first bite from the "Treats" menu are the torched honey bugs on rice with avocado and white soy. You lift the shell off and wrap around the triangle of nori and take a bite. It is succulent, creamy and divine and the white soy is delicate enough to not overwhelm but still flavour the bug meat. (Dear Overseas readers, bugs are not bugs, but Balmain bug meat is similar to lobster). Ben hits the jackpot with one with roe, "Deal with it suckers!" he yells. Sigh, honestly what is with Salarymen... But to his credit, he did hand it over so we could get some roe. 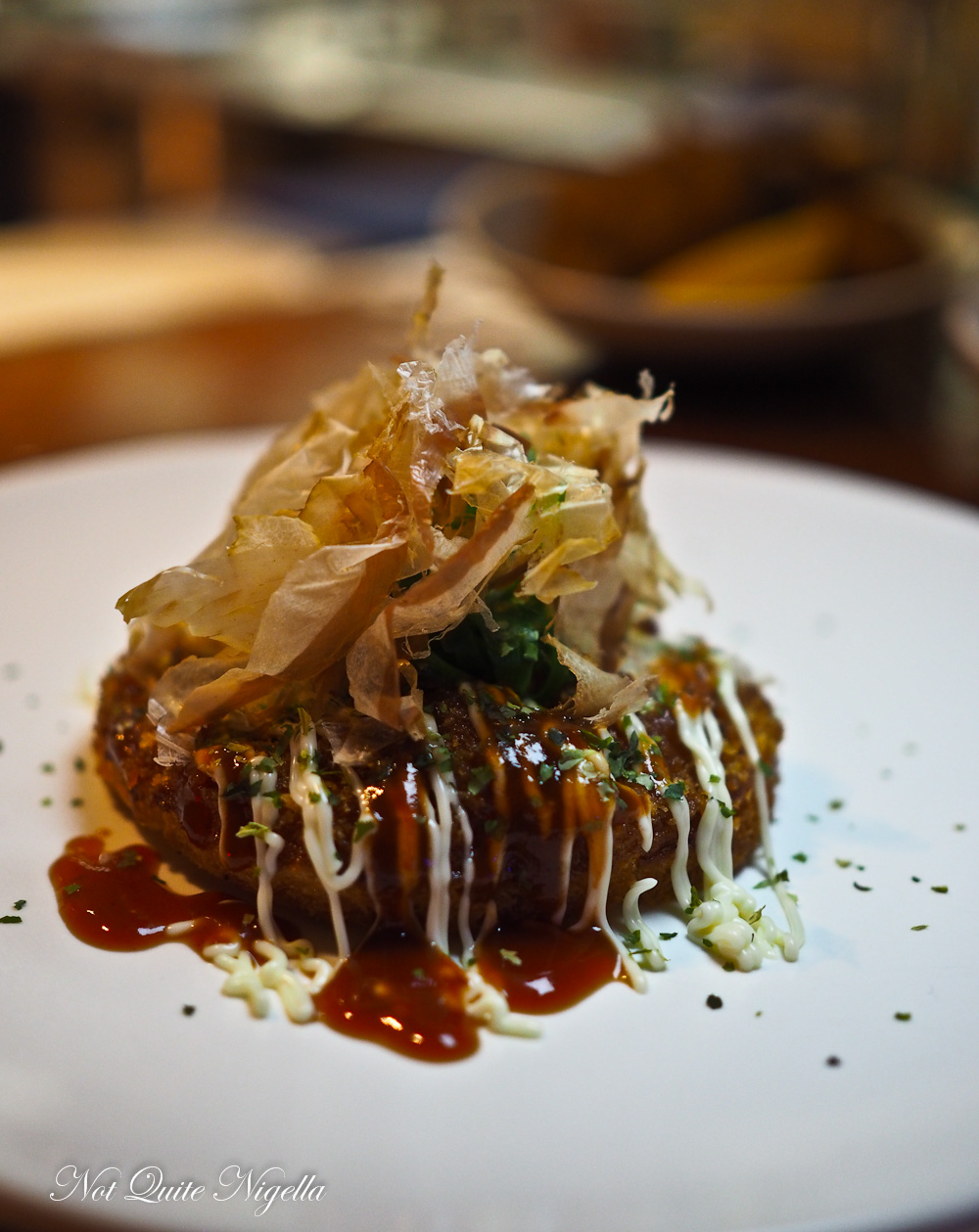 Prawn toast okonomiyaki? Woah, two of our favourite things in one! We watch as they prepare a round prawn toast, quarter it and then give it the okonomiyaki treatment with mayonnaise, okonomiyaki sauce, spring onions and bonito flakes. And you know what? It's brilliant. The crunch of the prawn toast, the sweetness of the bulldog sauce and the creamy mayo and spring onions are so good together. "I just need for this to be bigger," says JY. They don't call her the Black Widow for nothing... 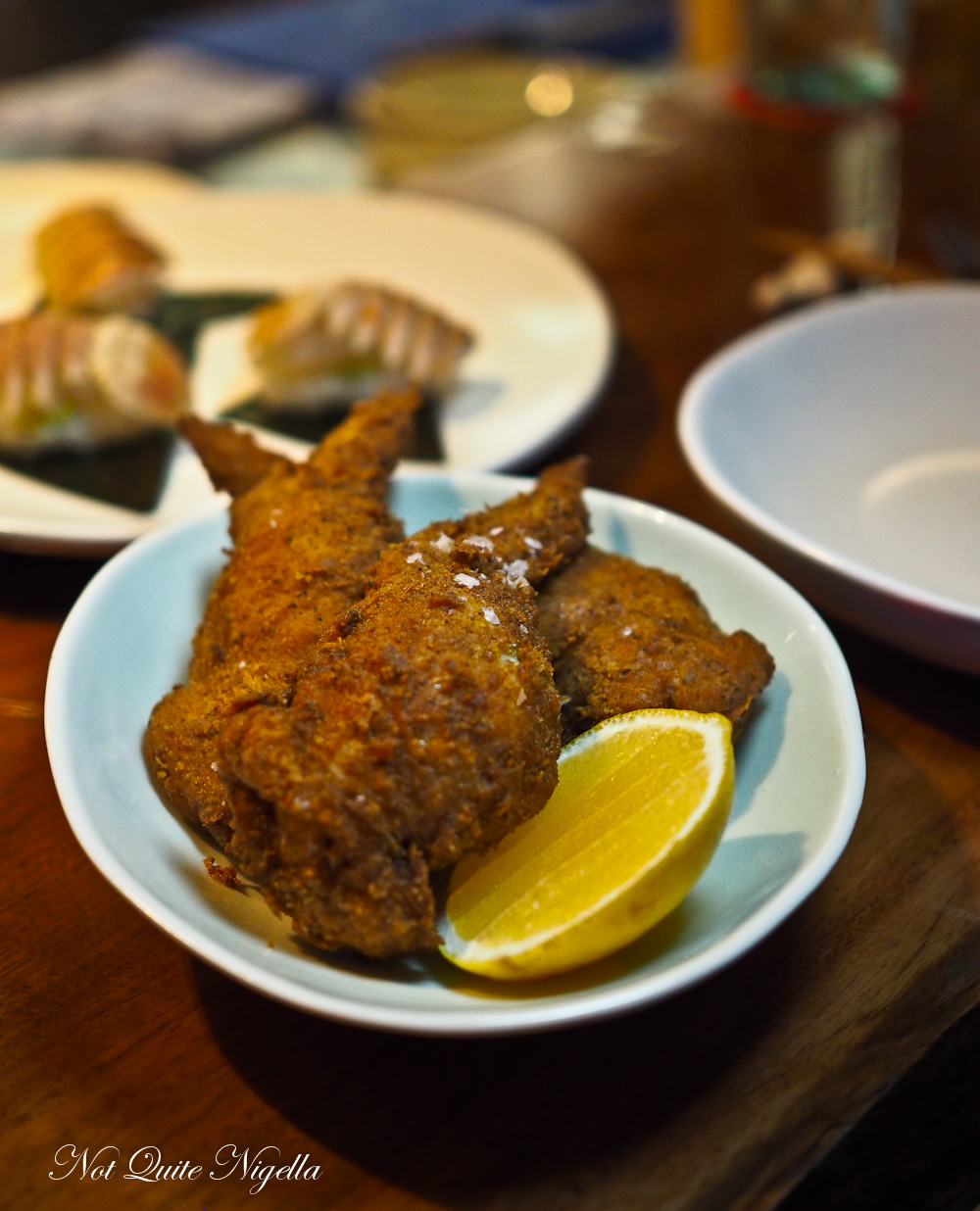 Stephen explains the process of the crayfish chicken wings, "We bone out the wing and we pipe the seaplant butter in the bottom (samphire and lemon juice) and then we put the lobster on top and then a chicken mousse. It's sort of like a chicken kiev." They're good but there feels as though there is perhaps something missing, maybe a sauce or a different seasoning. As it is we dip it in the prawn toast sauce. 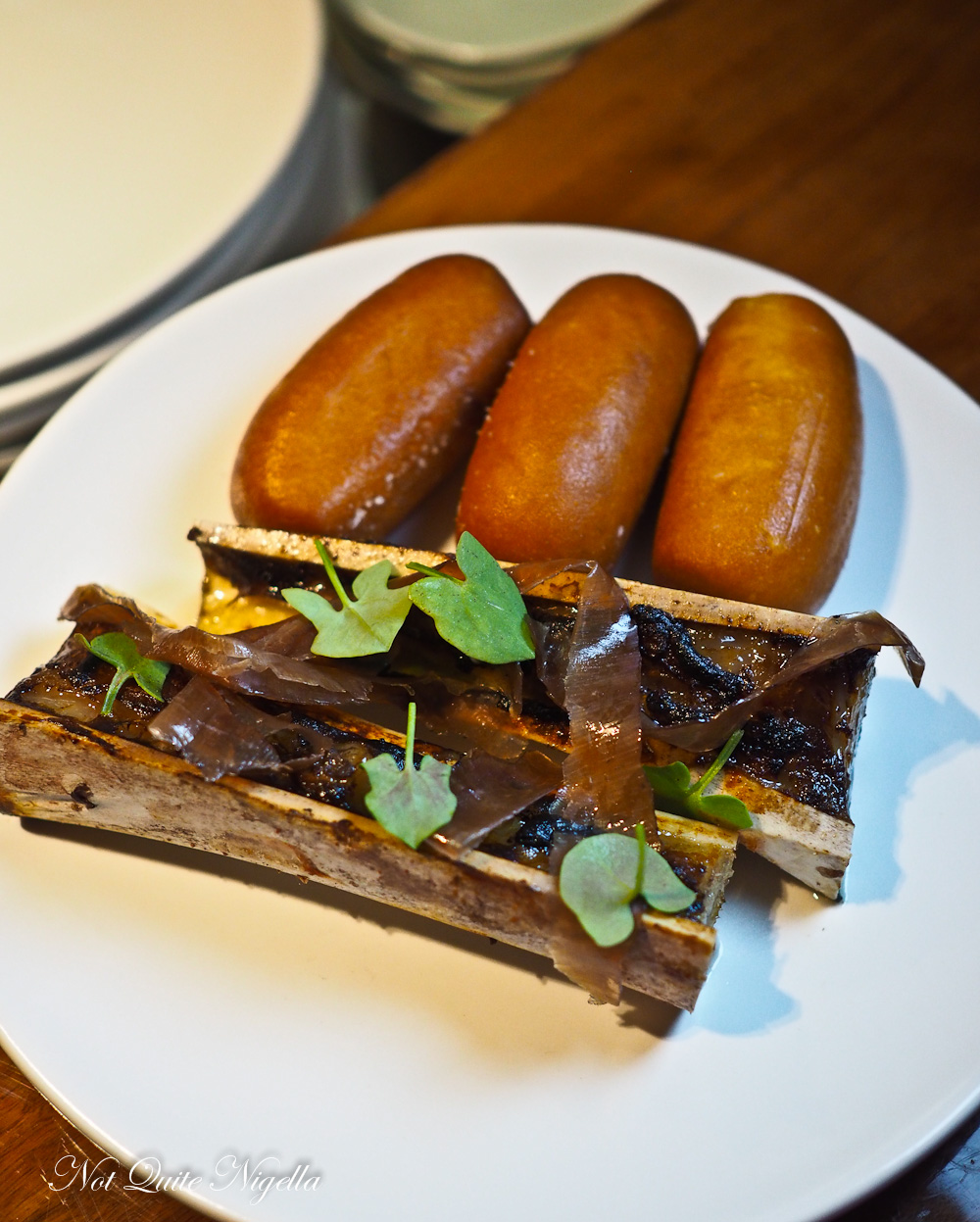 Most of the meals are portioned for two but they are nice enough to give us an extra bun for this. And good thing because JY is in love. Sorry Ben! She is totally smitten with this luscious bone marrow with paper thin slices of duck ham, seasoned with miso and three sweet, deep fried but not greasy milk buns. A little marrow spoon would be great to prise the precious marrow out but other than that we all loved this.

A visit to the bathroom yields a slight shock. I inadvertently choose the darkest cubicle and nearly jump a foot in the air when I enter and hear a man's voice talking. Thinking that I have company I stare wide eyed trying to find the man but it's just a recording of "The Twelfth Man". It was Stephen's idea as a cricket lover. One of his favourite restaurants in Copenhagen called Geist has a recording of a thunderstorm and Muhammad Ali's fight of the century in the facilities and he was inspired to do something fun with theirs. 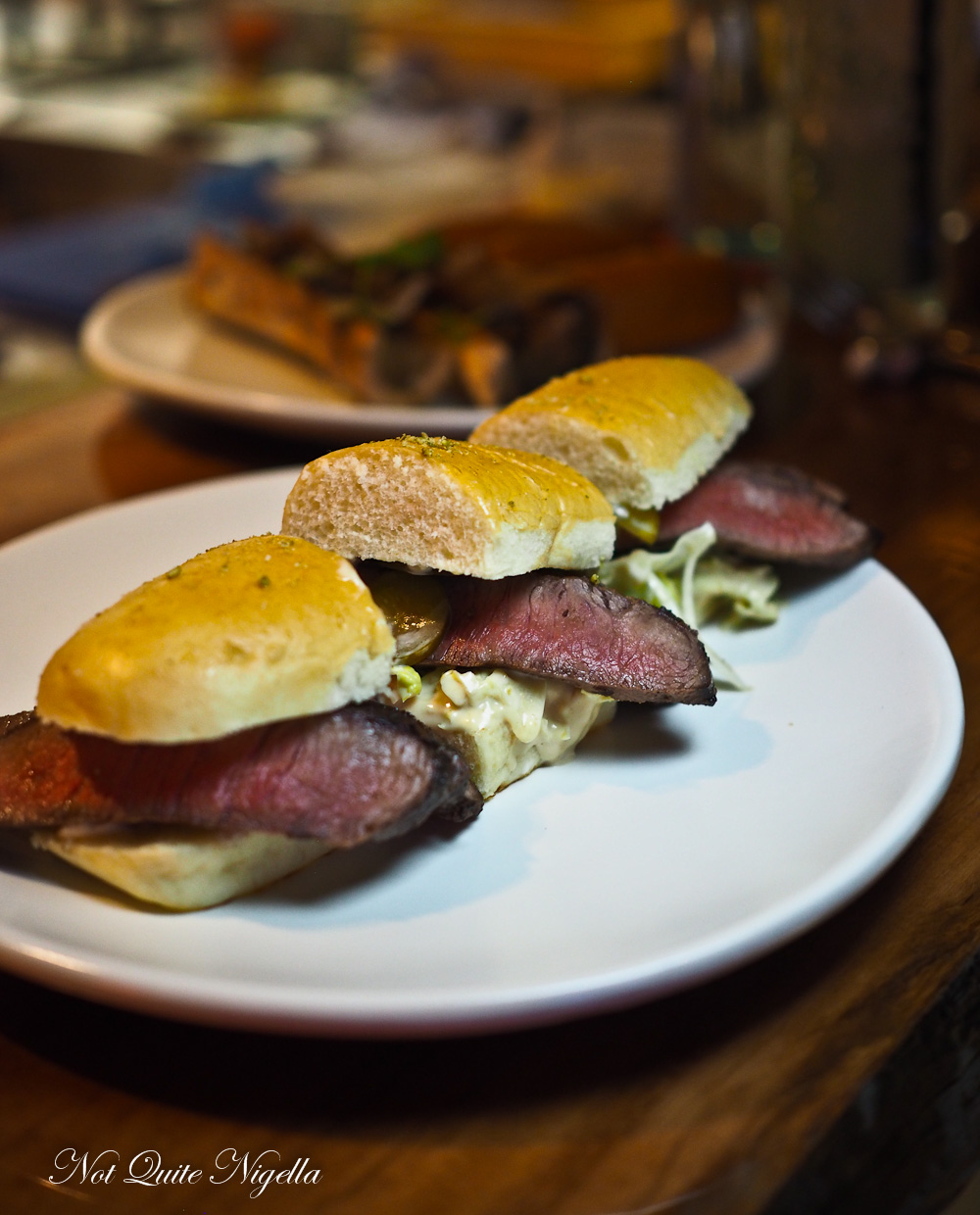 Wagyu flat iron is one of my favourite cuts of beef and we had to order the Big Boy version as opposed to the slider (although you know us right, we have done it ;)). The bread is soft and slightly sweet and the wagyu flat iron melts in the mouth and is very generously portioned. It comes with pickles and red miso mayonnaise which the unctuous cuts needs. 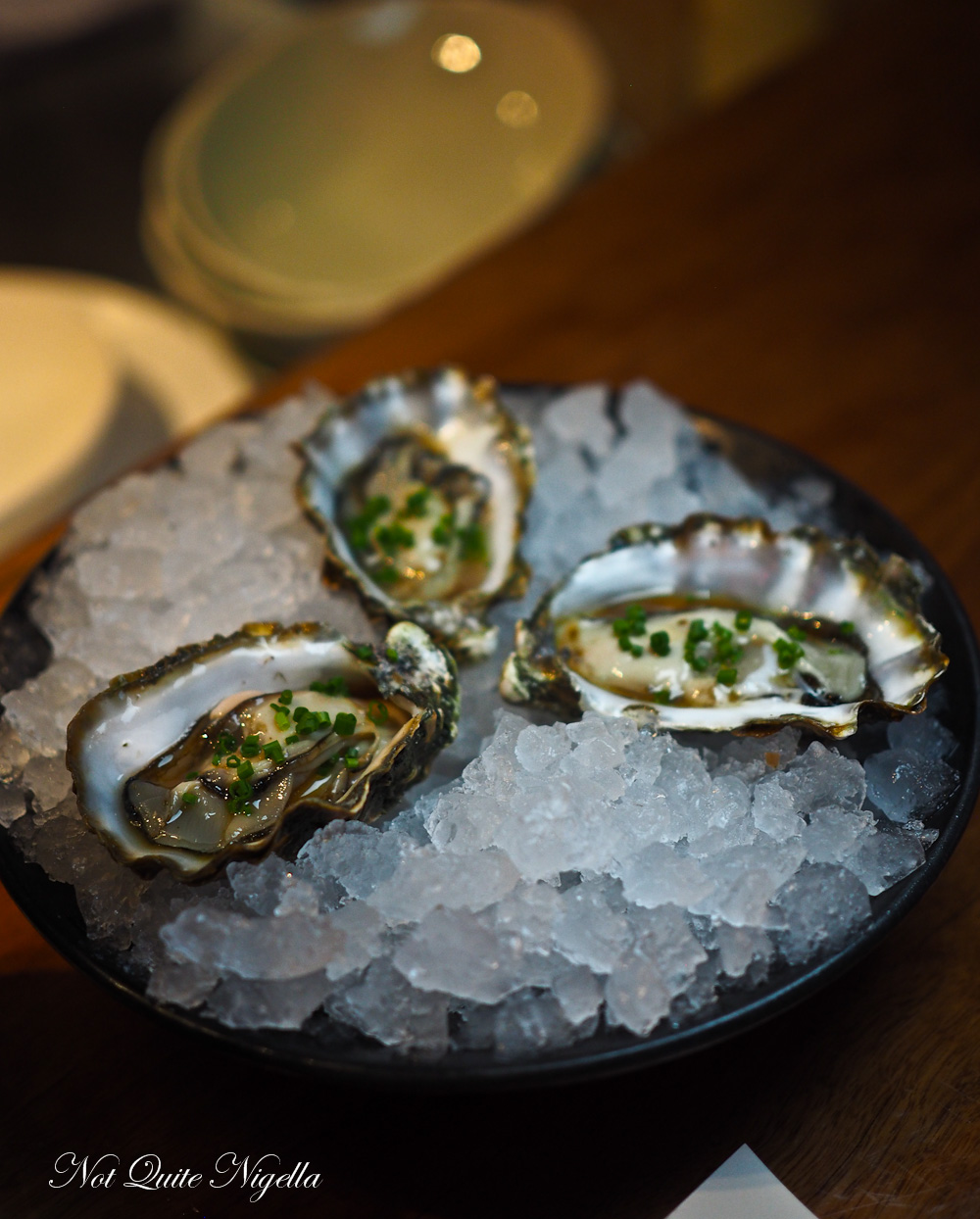 Okay this was a last minute order but it was hot that night. The Gold band oysters are creamy and larger than Sydney Rock oysters and here they are served with chives and a white miso vinaigrette. And every time I have oysters as tasty as this, I really want to put in another order for a dozen.

But I don't. Because next is the ramen. The main event. 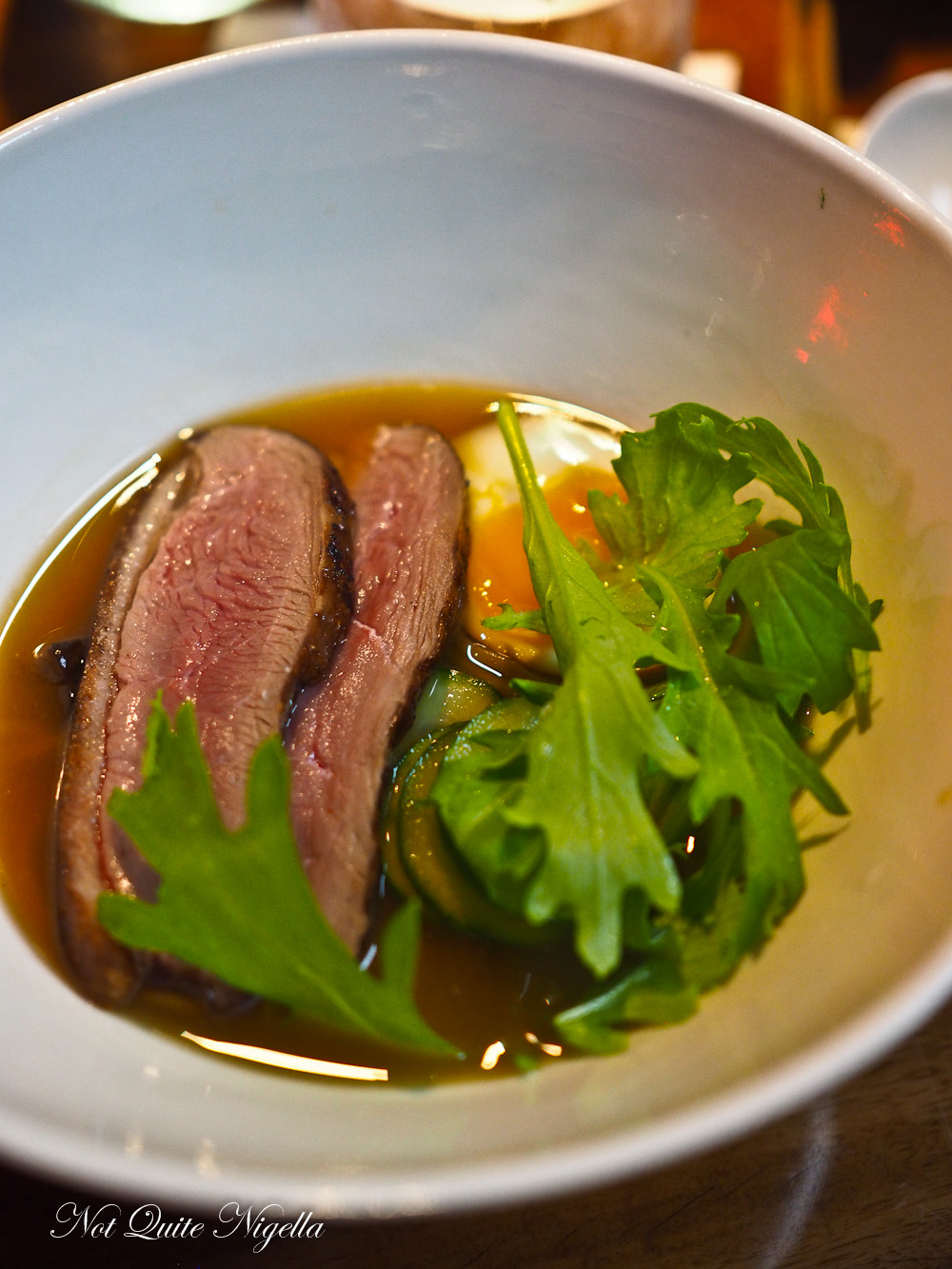 Some of them ramen bowls come in two sizes: small and large. The ramen menu during dinner has three options whereas during lunch there are a few more including a classic Shio Ramen (or salt ramen). All of the ramen noodles are made in house using single origin flour from Demeter farms in Gunnedah and are fantastically springy. The broth is a gorgeous duck broth, pure and nourishing and it comes with seared duck breast, pickled cucumber rounds, shiitake mushroom, mustard green and half a shoyu egg. My favourite part is the soup and the toothsome ramen noodles.

To create their ramen, "We do a blend of their organic wheat flour and a rye flour. It gives it a bit more body and a bit more texture. Ivan Orkin does these rye noodles in his noodles bars in New York and Tokyo. I met him in Tokyo on my last visit and I liked where he took ramen," explains Stephen. 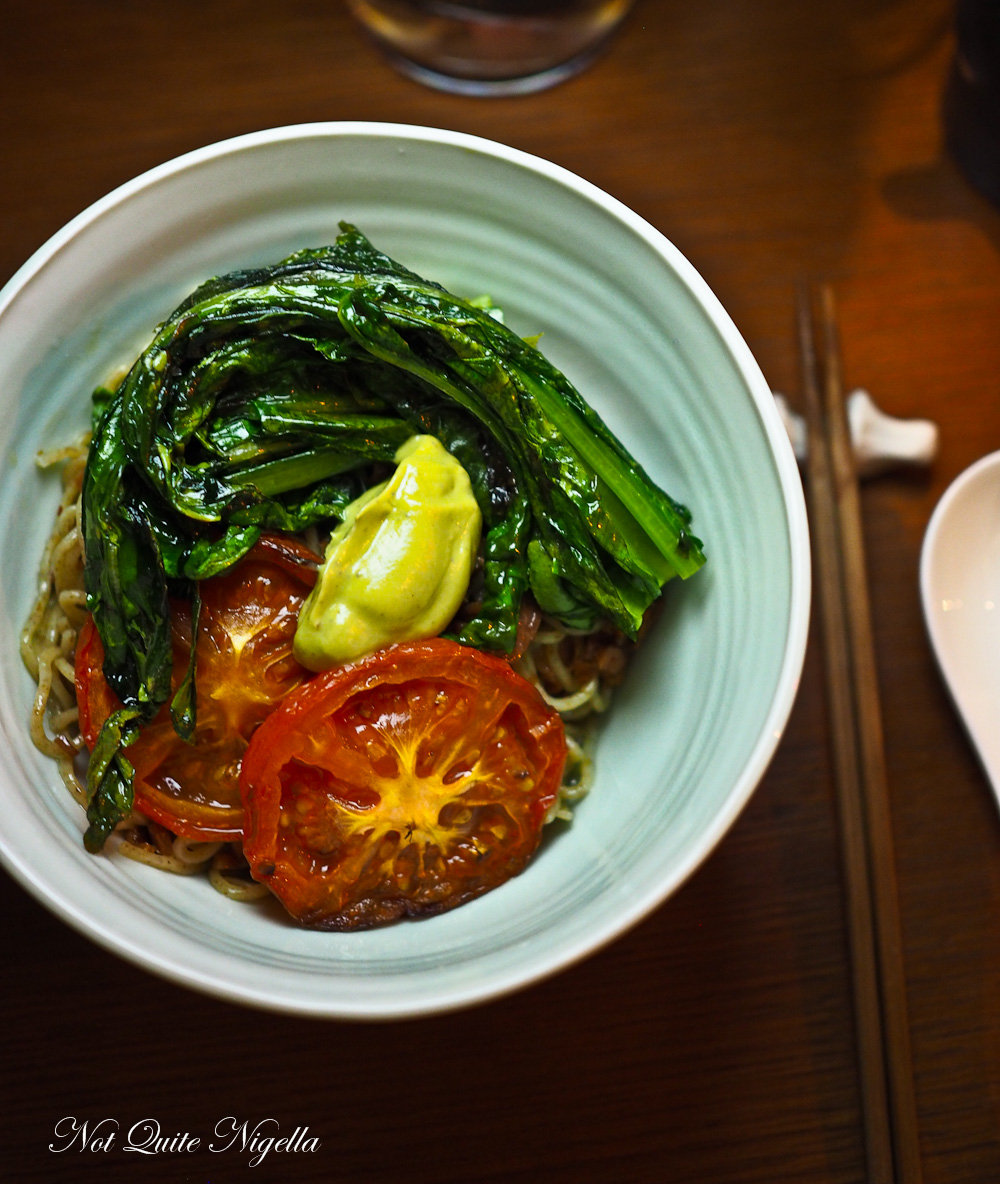 And because Mr NQN is a ramen maniac but wasn't able to make it that evening, we went the next day to try two more ramen. The classic shio or salt ramen and the BLAT. The BLAT is a no broth or dry ramen (mazemen) with confit bacon pieces, two fat slices of roast tomato, a small dab of avocado and a black pepper cream. It's not for ramen traditionalists although I like this highly seasoned and fun take on ramen. There is also a bit of bacon fat collected at the bottom from the bacon and sauces. 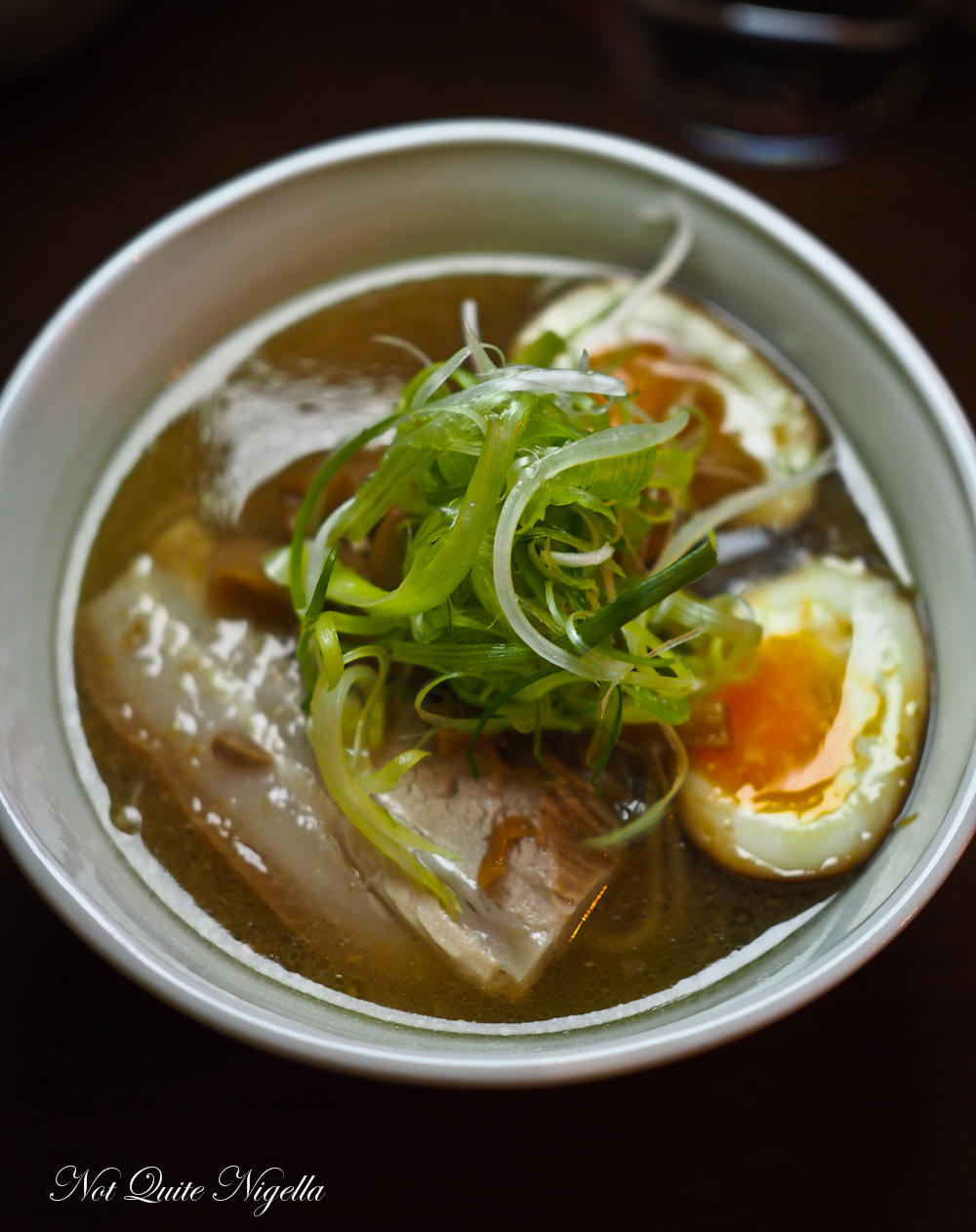 Stephen elaborates on the classic Tokyo Shio ramen, "The Tokyo shio is very light, it's a light chicken bowl, there's not a lot going on in the bowl. There's an egg, a piece of pork and a little bit of bamboo. And you don't see that in Sydney, you go to Chinatown and you've got Gumshara and it's a pretty full on heavy thing and people go there for the big hit of fat which is fine and there's plenty of that in Sydney. But I don't want to compete with that I don't want to take anyone's business away." Indeed the shio ramen or a classic ramen is beautifully pared back and gorgeous in its simplicity. This is the sort of ramen that I remember having in Tokyo. It's about the broth and the toothsome noodles with just a bit of support from the toppings. 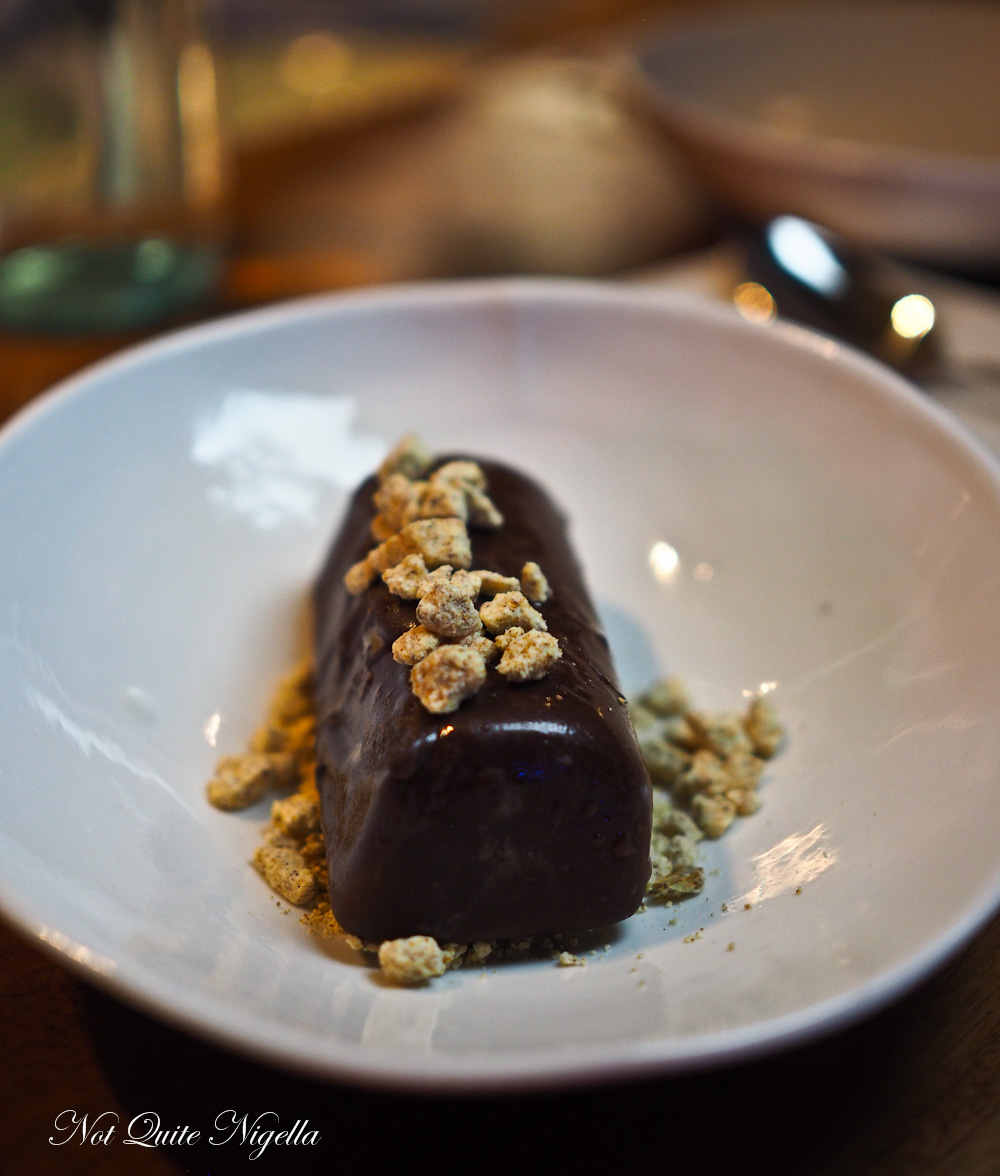 There are two desserts on offer while they are waiting for a working taiyaki machine. Smoove is a vanilla ice cream bar coated in a layer of dark chocolate. There is plenty of crunch from the honeycomb and almond and it's a perfect summer dessert. 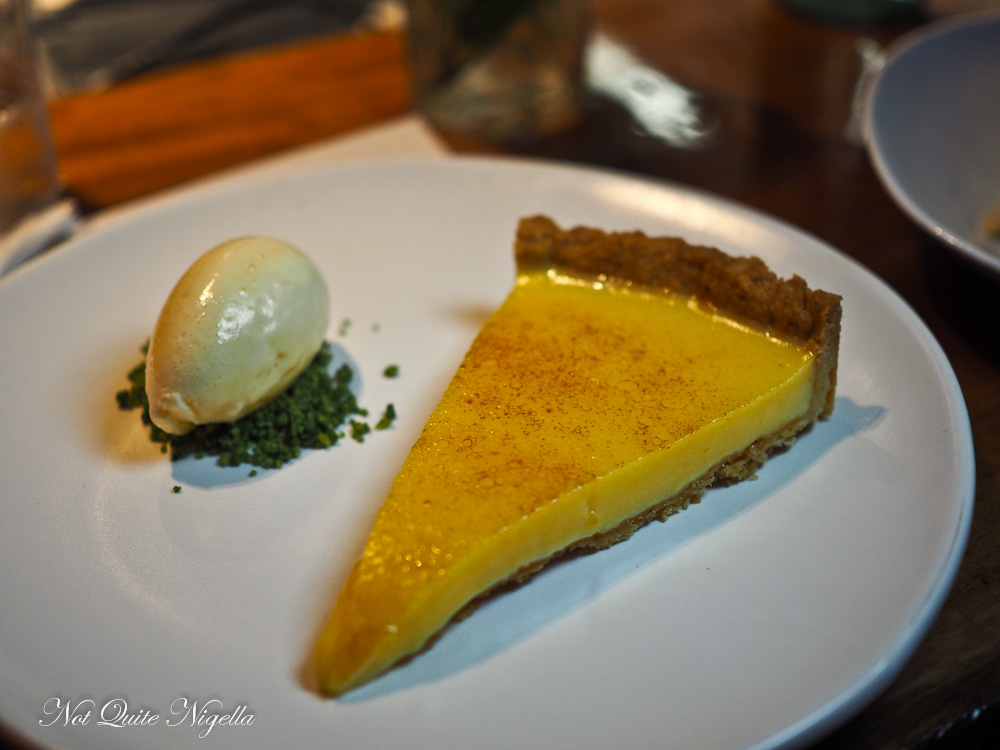 The second dessert is what has to be the biggest slice of lemon tart I have ever been served. It's served with a scoop of buttermilk ice cream that gives the sweet tart a nice tang and green white chocolate crumbs. The pastry is very buttery and crumbly and baked dark and the lemon filling is silky smooth and soft.

And when the bill comes it is reasonable, although we seem to have eaten everything we possibly could. Which is really just a form of a challenge for JY aka Black Widow to come back and eat more!

So tell me Dear Reader, which ramen did you like the sound of best? And would you sit at the pass/bar or at a regular table? And can you finish a bowl of ramen?